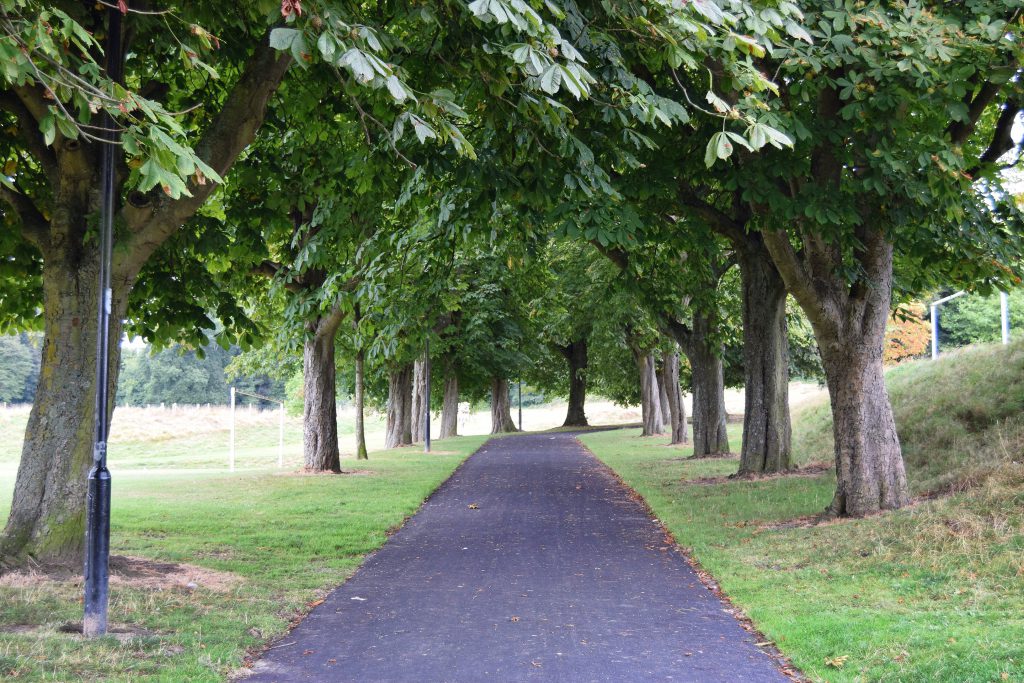 Most of July and August has been taken up with zebra hunting but, this week, with almost all the zebras found, CJ and I decided it was time to revisit the boundary stone hunt. Since I stumbled upon the first of these curious stones, back in April 2013, I have managed to find eight out of the twelve there are supposed to be. Not all the stones have been where I expected to find them and there have been several fruitless hunts. When we set out today I had my fingers crossed this would not be another.  END_OF_DOCUMENT_TOKEN_TO_BE_REPLACED 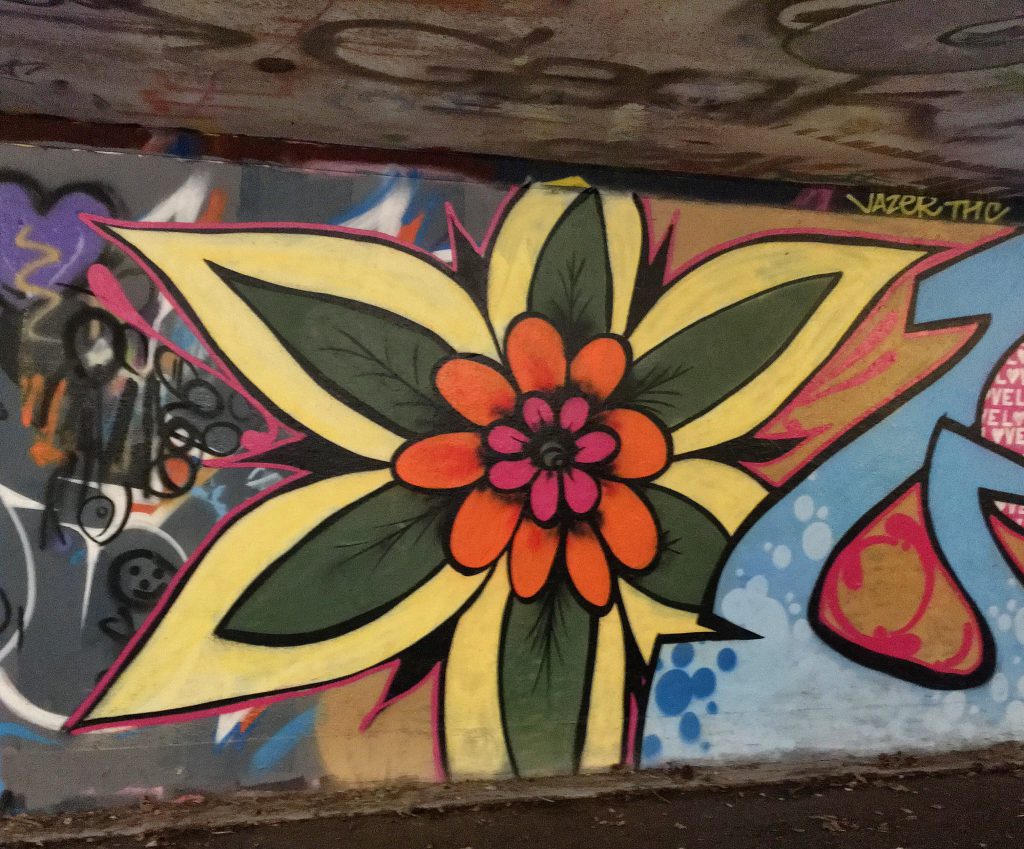 Parkrun is becoming a bit of a regular Saturday morning event for me these days, although, obviously, I don’t run. Sometimes I help out, doing things like marshalling, sometimes I just watch or have a wander on the Common, other times I walk it. What I’ve never, ever been asked to do before though, is blow up balloons. This was a very special parkrun though.  END_OF_DOCUMENT_TOKEN_TO_BE_REPLACED 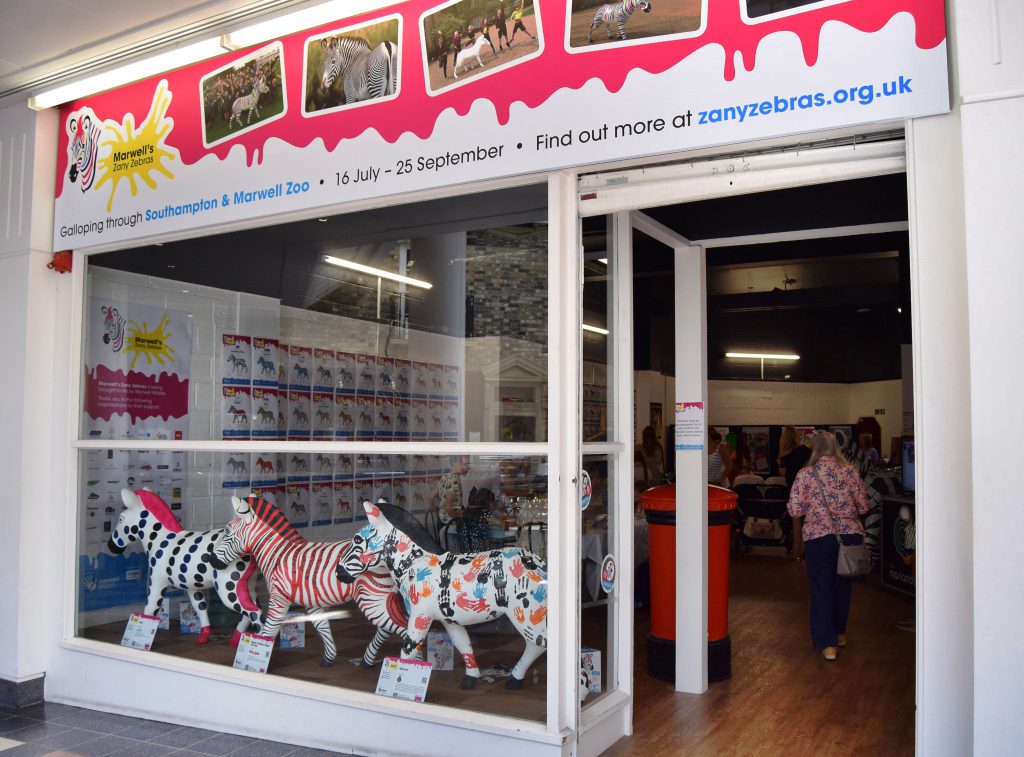 While we’d been walking around the Marlands I’d been doing my best to tick all the zebras we found off on the app. Out in the town for the most part it was easy because the app on my phone would magically find the zebra we were closest to most of the time. Occasionally it wouldn’t and CJ would have to read the number on the plinth out to me so I could manually tick it off. With so many zebras and baby zebras in the Marlands, the app was finding all of them at once. This was confusing.
“Maybe we should save the Zany Zebra headquarters for another day,” I suggested. “I’m beginning to lose track of what we’ve seen and what we haven’t.”

“There can’t be that many left now,” CJ said. “We might as well see them all while we’re here. If we don’t we’ll kick ourselves later.”
He had a point so, despite feeling rather zebraed out, we headed for the Zany Zebra shop. There were three baby zebras in the window. Bizzy, sponsored by Business South had spots instead of stripes and a fetching shocking pink mane.  Black and White and Red All over was, unsurprisingly, sponsored by the Daily Echo and her red stripes bore the names of local areas. Then there was yet another Woody. To avoid confusion this Woody was called Woody (Huffty). He was painted with handprint stripes by the children of Woodentots Nursery and Royal Naval personnel at HMS Collingwood 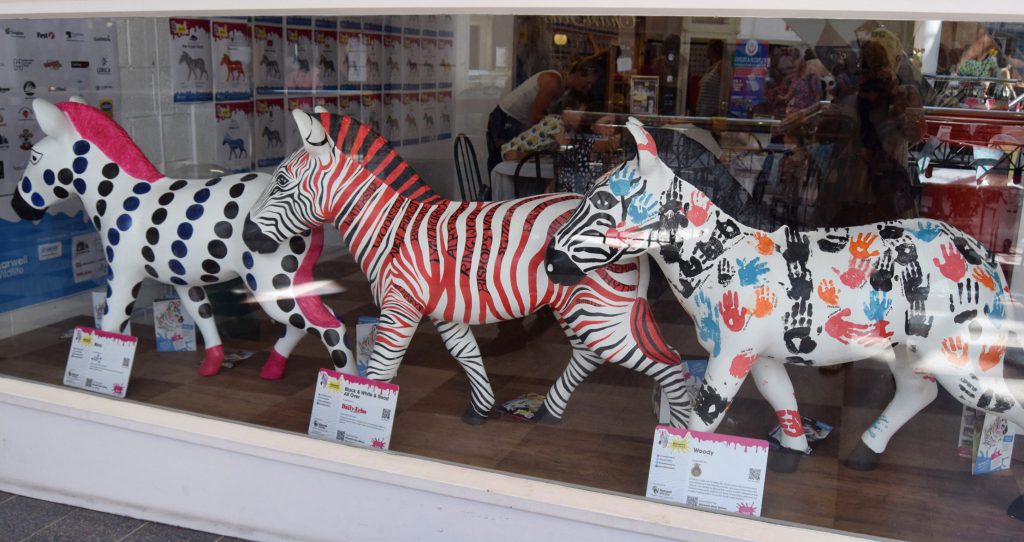 Inside there were parents and children at a large table painting and lots of phoots of the zebras around the city. The first baby zebra we saw was Periculo Z painted with the patterns of endangered or extinct animals by the children of Oak Lodge School. 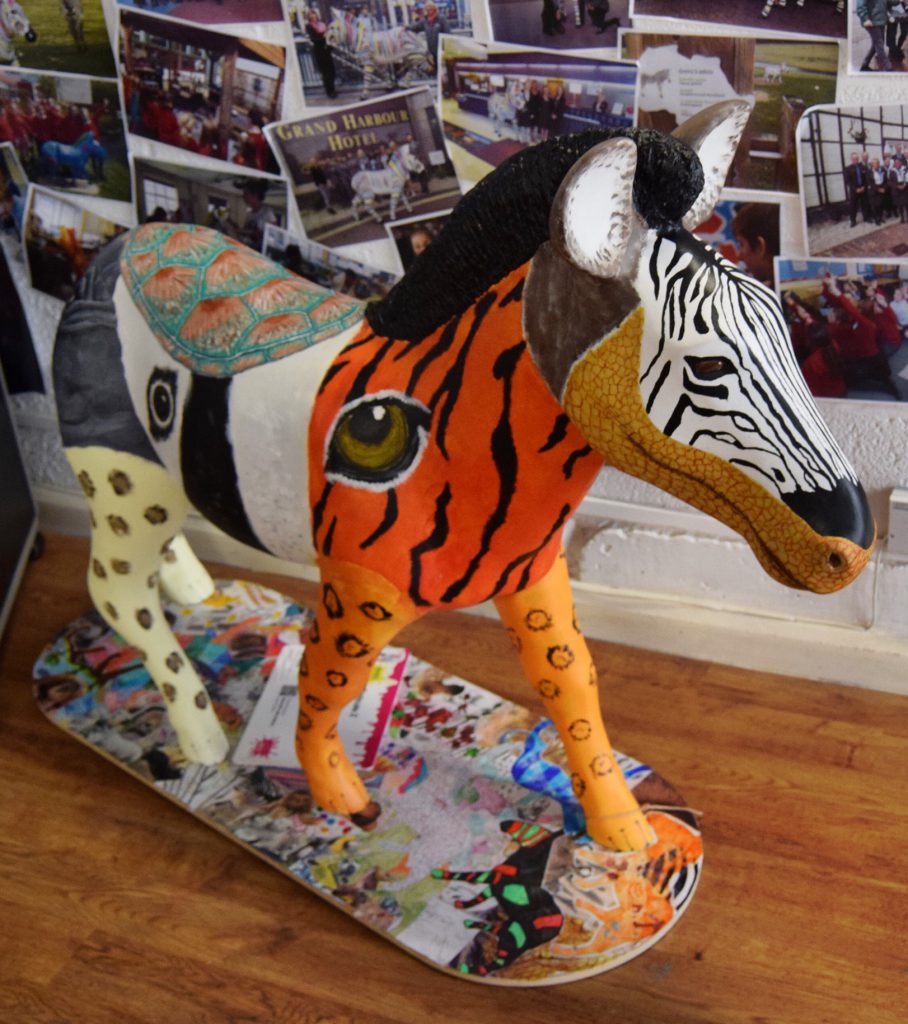 Then we spied a zebra we’d both being waiting to see almost since the beginning of the trail. It was Chris Cross, the zebra that had began the trail standing at the top of the precinct but had been vandalised very early on, before we saw him. He was well worth the wait. 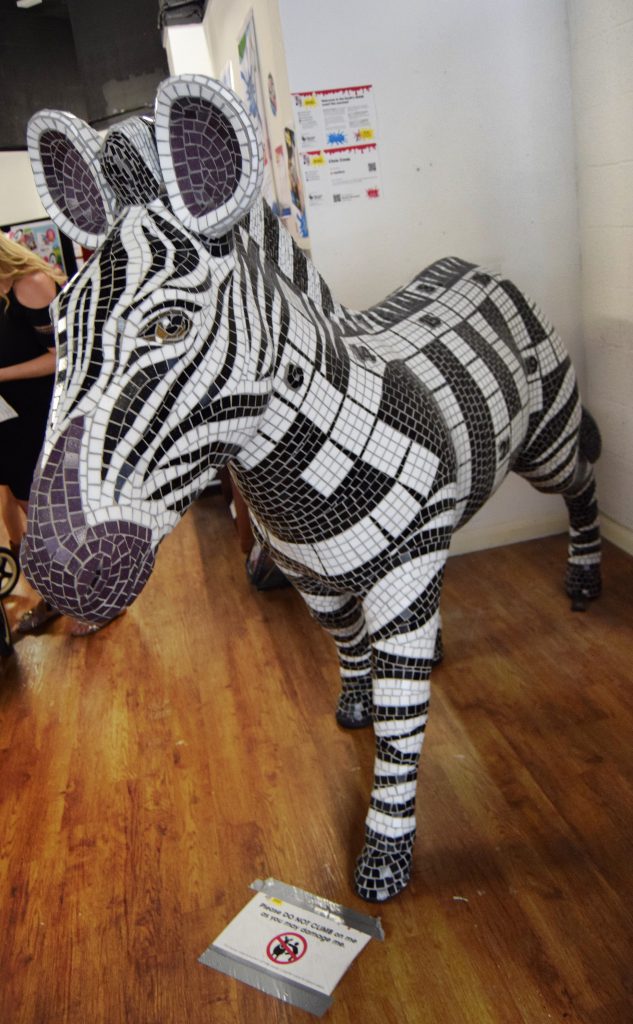 Sponsored by NatWest Bank he was created by Will Rosie from hundred of tiles in the form of a crossword puzzle. We were both glad to see the damage hed suffered seemed to be all repaired and he looked perfect. 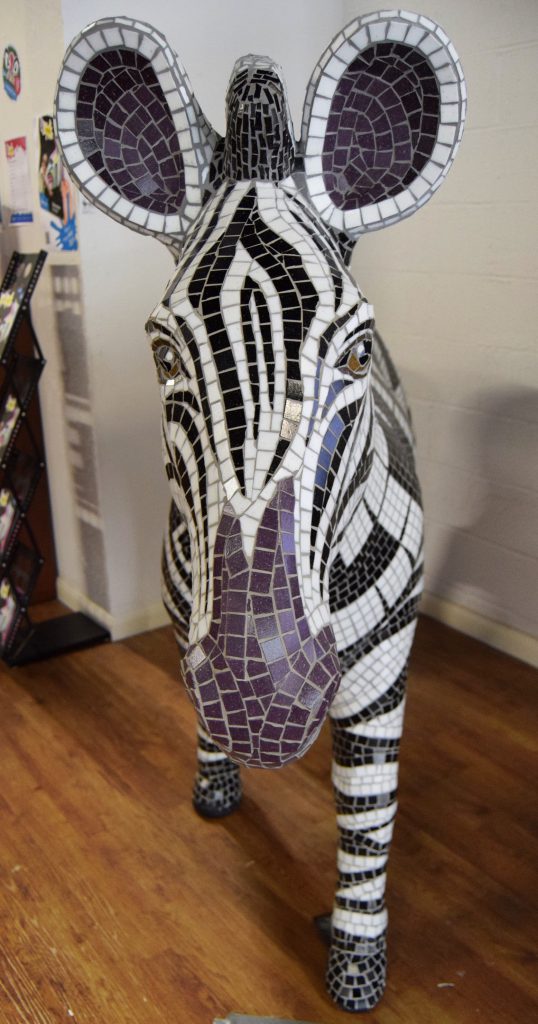 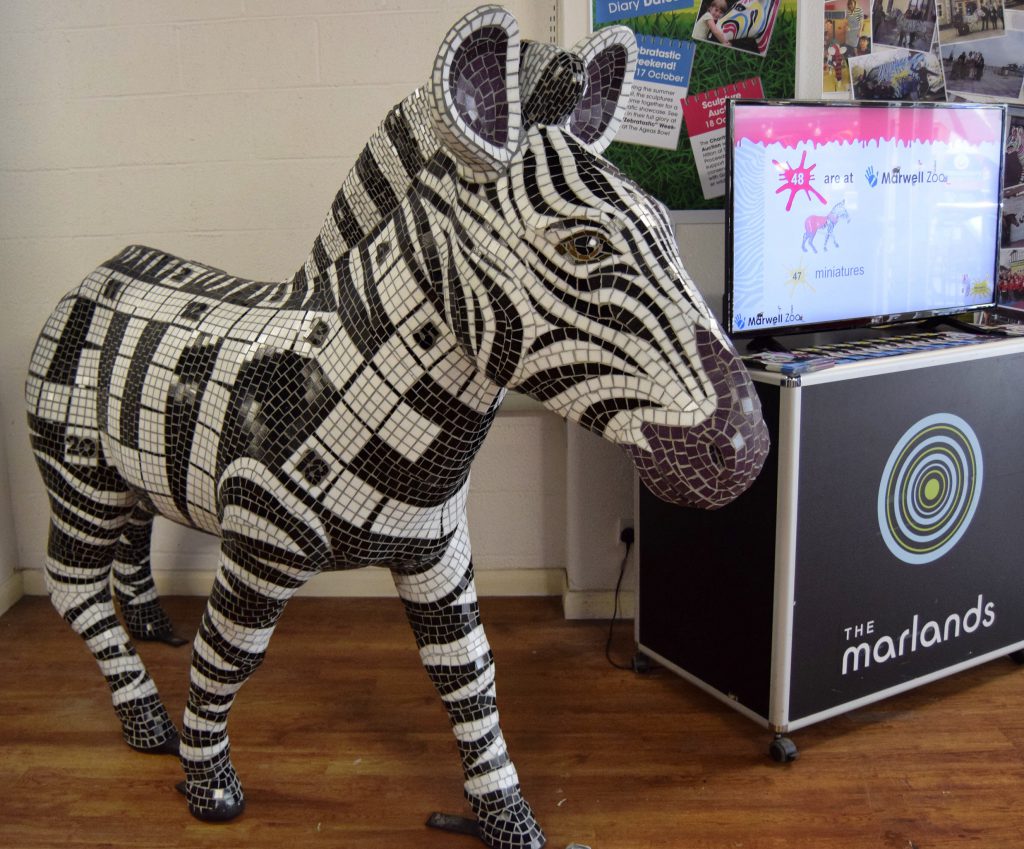 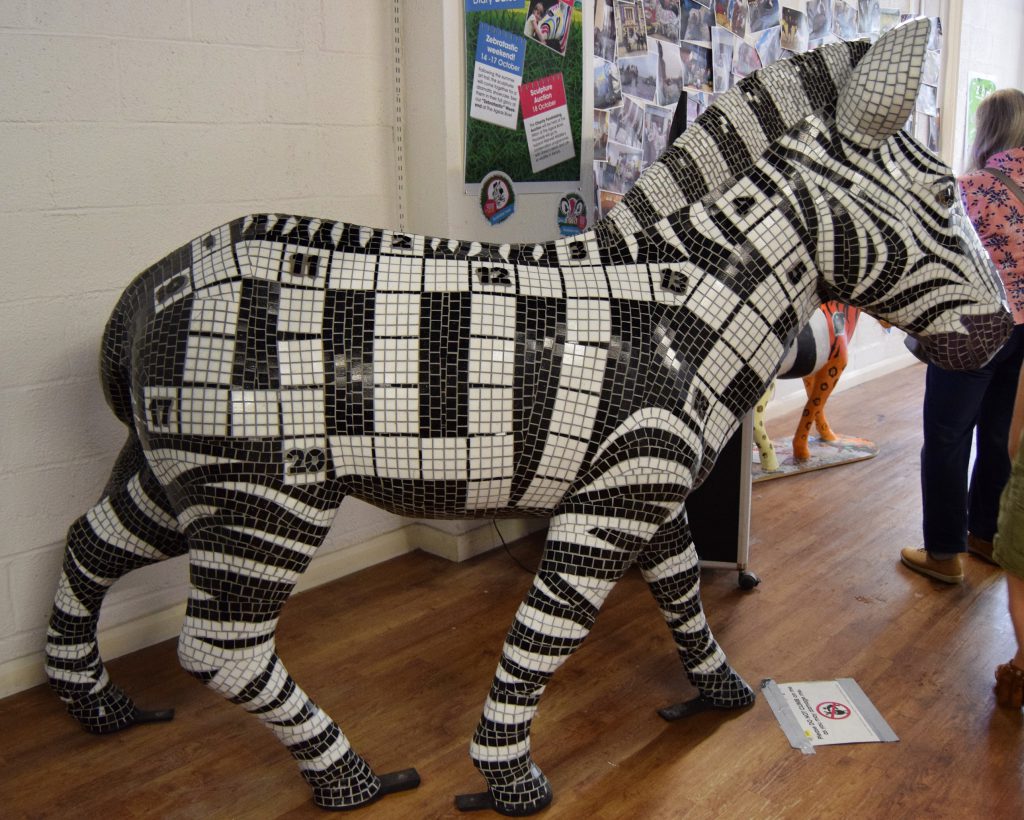 Another zebra we’d missed on the trail due to the vandals was Zeeberry, the strawberry zebra sponsored by Pickwell Farm where you can pick real strawberries. With her red body,  strawberry pips and green ears, painted by Deven Bhurke, she reminded me we hadn’t had lunch yet. 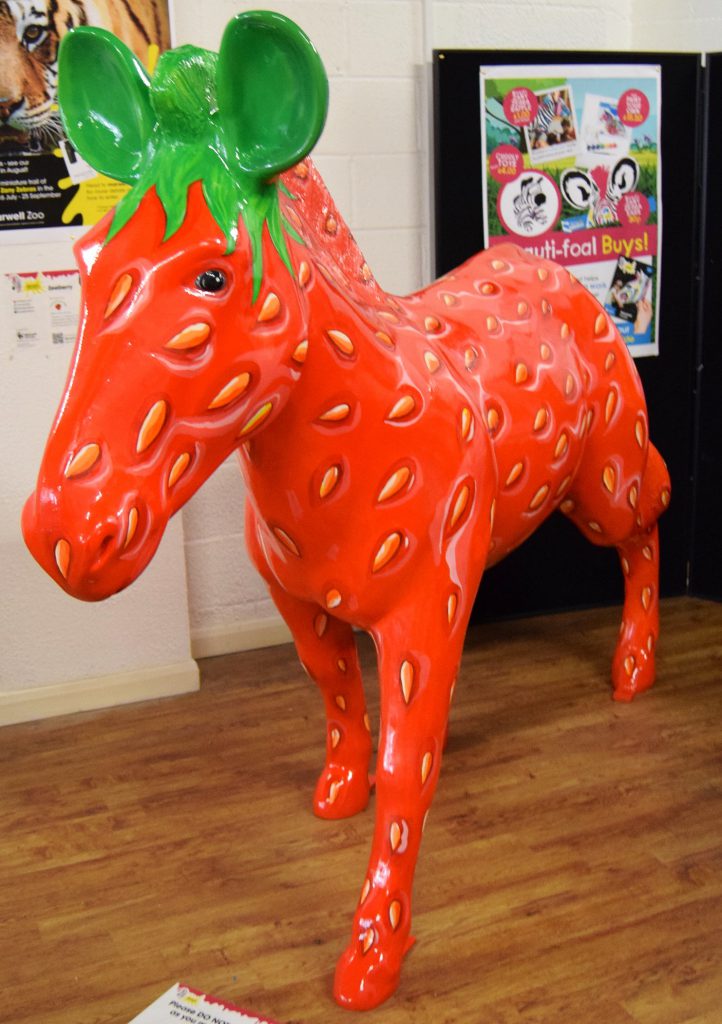 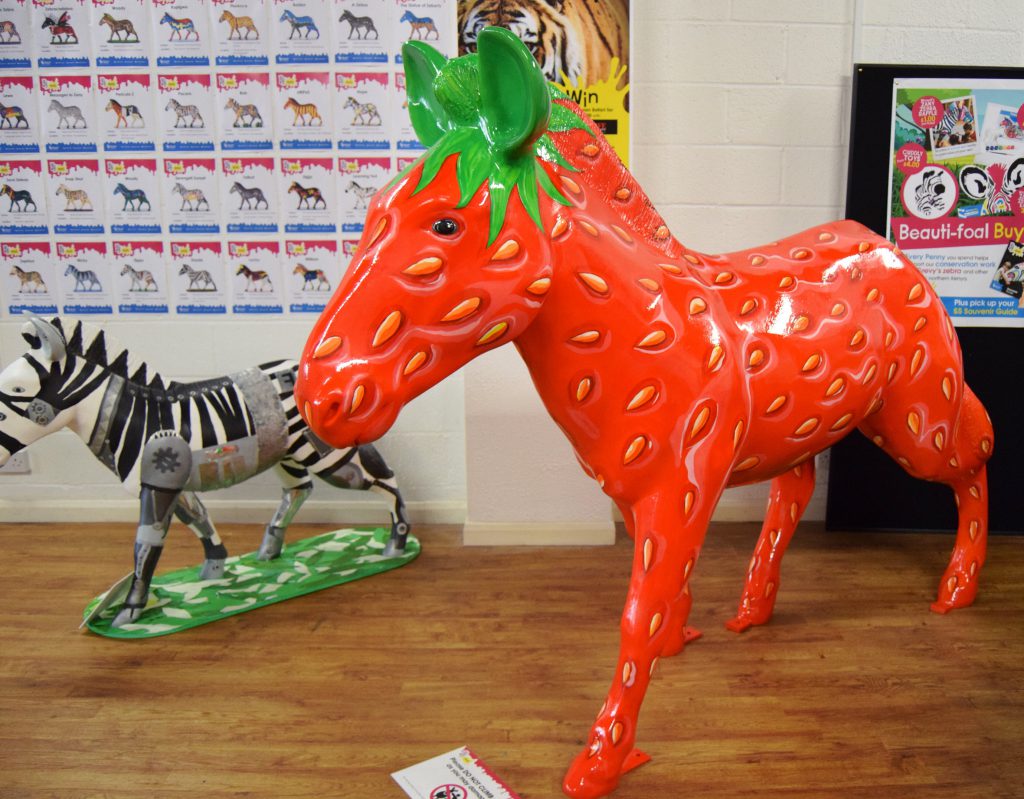 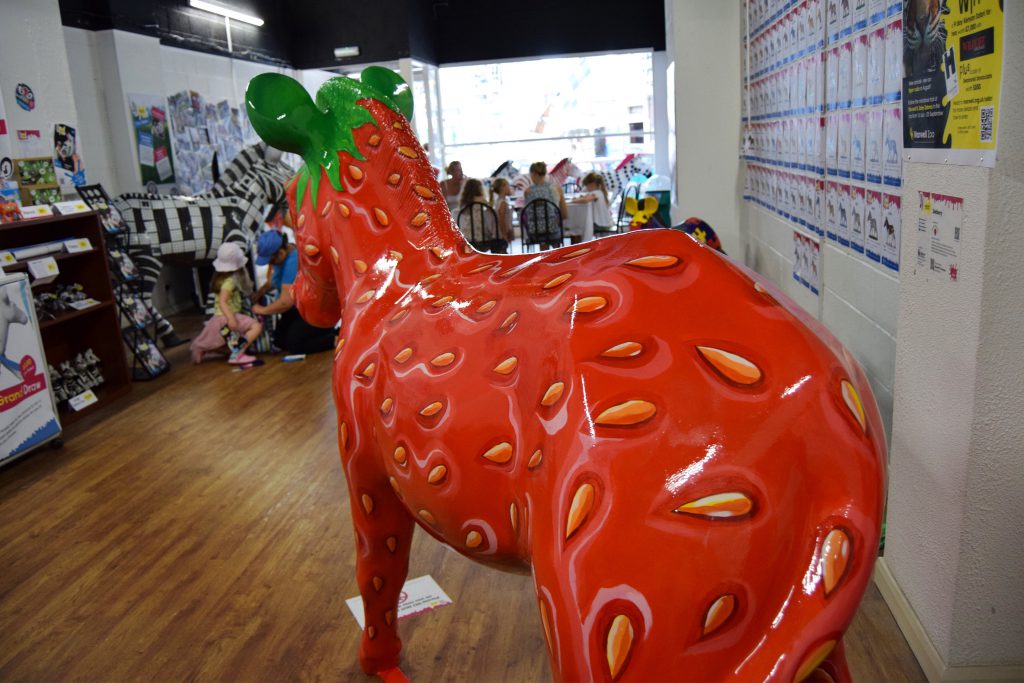 In her shadow we discovered Mechanical Zebra designed by Finley Harris of Valentine Primary School. This fantastical creature has bolts, cogs, nuts and wires, areal robot of a zebra. 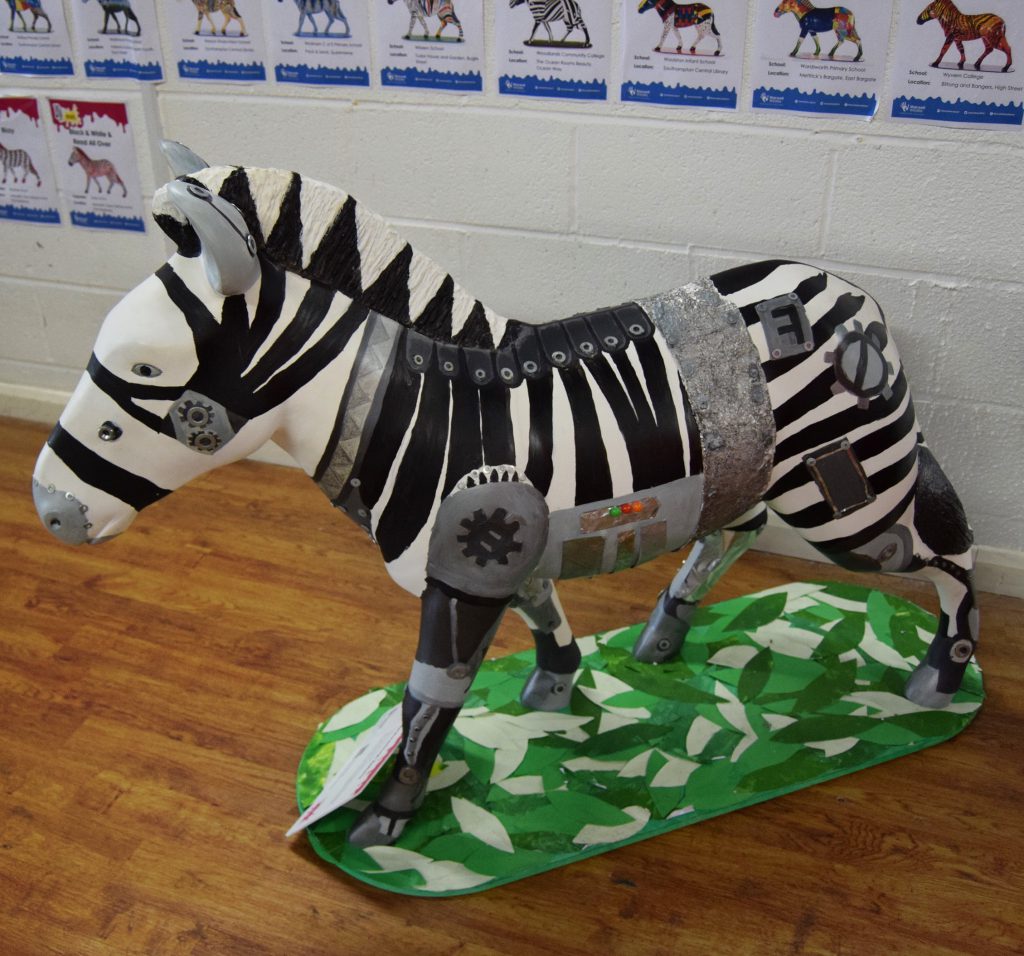 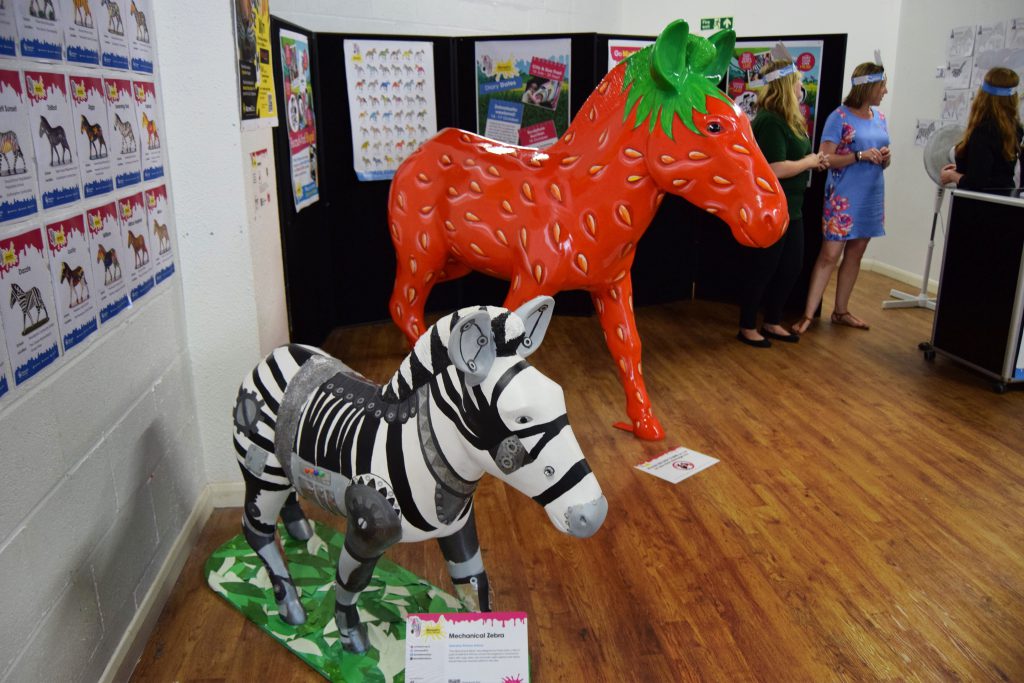 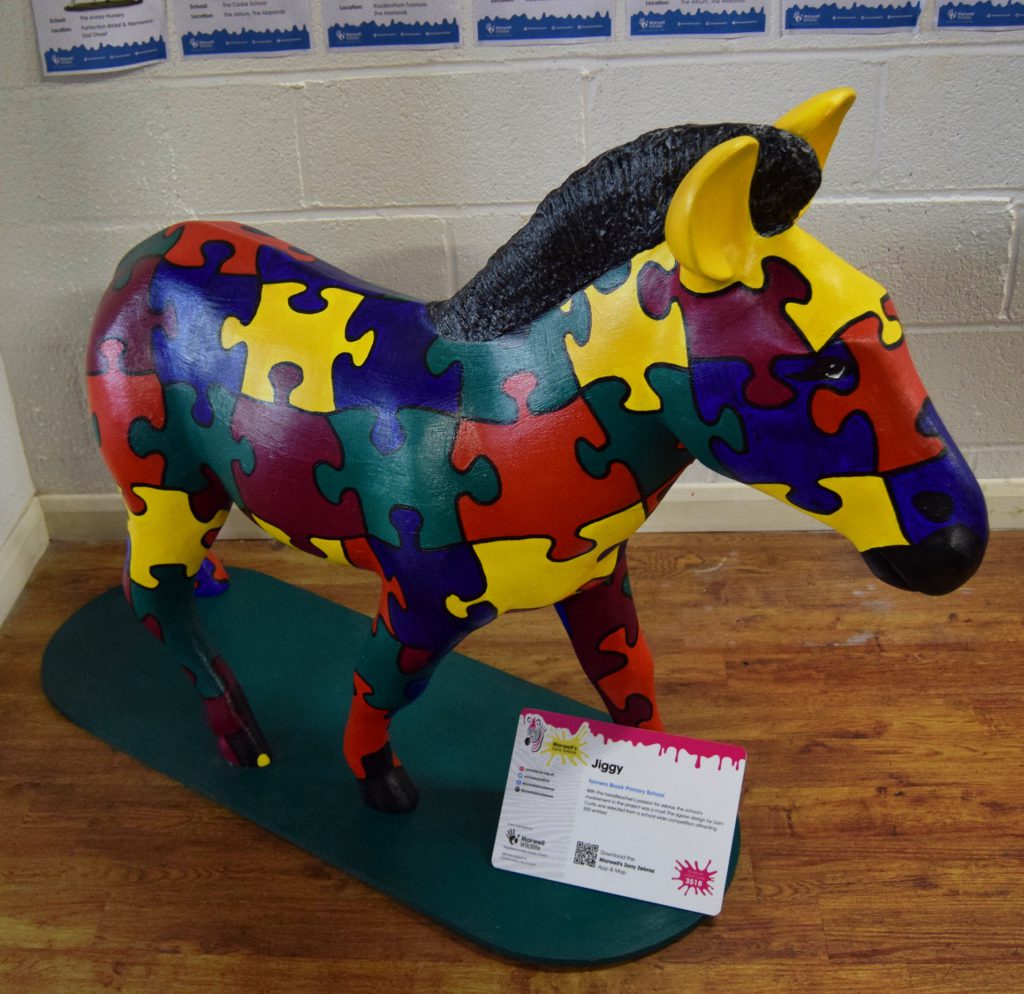 “So, have we found all the Marlands zebra now?” CJ asked as we ticked Jiggy off the list.

“Let me just check the app,” I said, “it would be really annoying to get home and find we’d missed one.”

It was a good job I did check because we’d missed more than one. In fact there were three zebras still to find in Marlands shopping centre and it looked as if the first was just across the atrium opposite the Zany Zebras Headquarters. If we’d been paying attention the zebra striped cloths on the tables outside Fredericks Chocolates. This is most certainly my kind of shop.  Inside, amongst the chocolate and jars of old fashioned sweets, we found Florence. She’s named for Florence Nightingale who once lived at Embley Park, now the home of Hampshire Collegiate Prep School who painted her in their school colours. 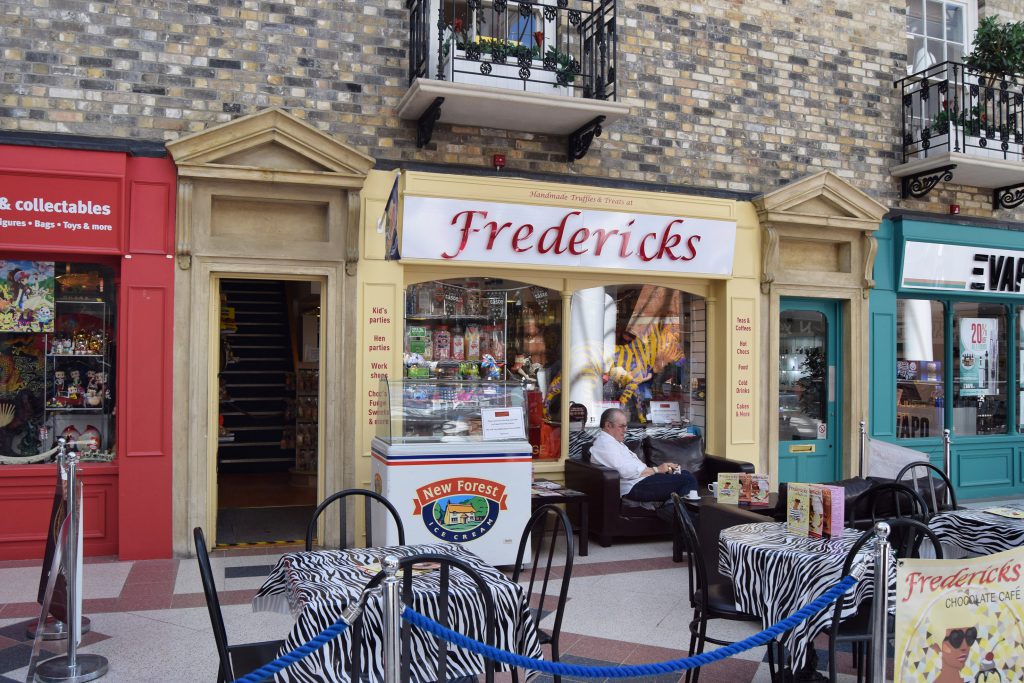 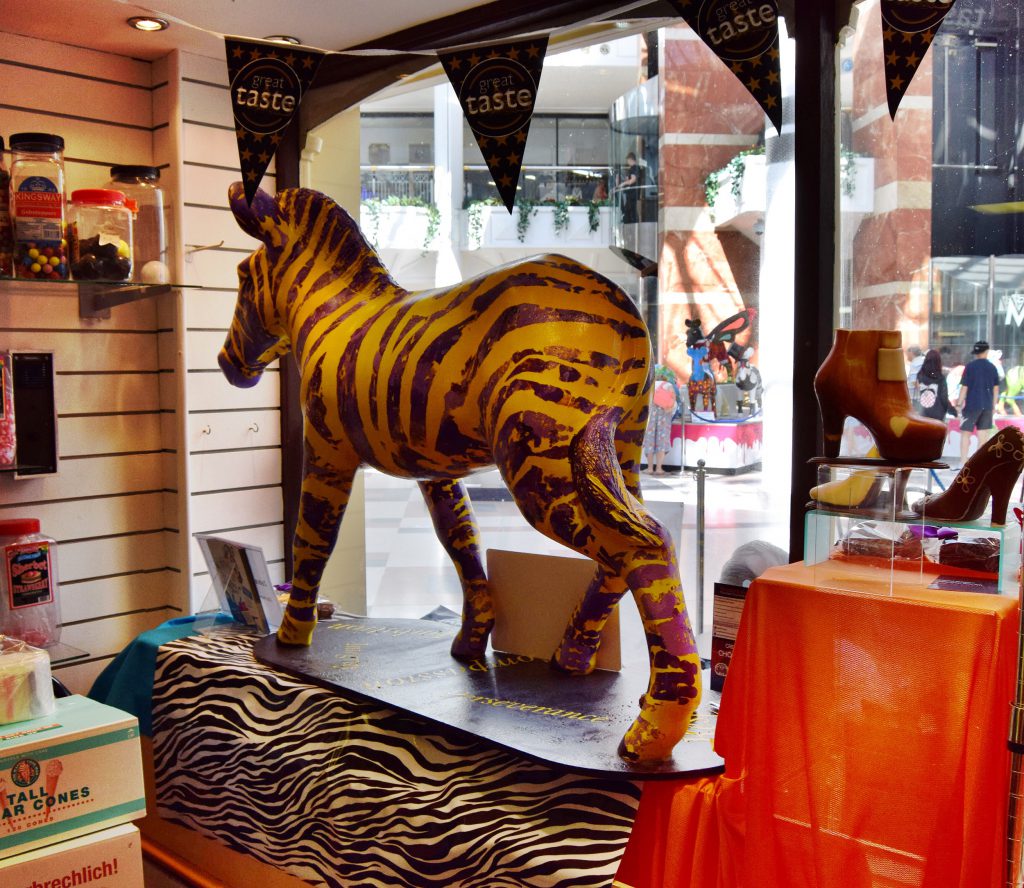 According to the app the next zebra was somewhere on the ground floor in a shop called Discount Second Hand Jewellers. This was a shop I’d never heard of, although it sounded quite interesting. Right at the beginning of our walk around Marlands, when we went upstairs when we intended to stay downstairs, we must have missed the shop and Aztec the zebra. It didn’t take long to put this omission right. She’s a colourful beast painted with rainbow swirls on a black background by the children of Shakespeare Junior School. I’m very glad we didn’t miss her out, 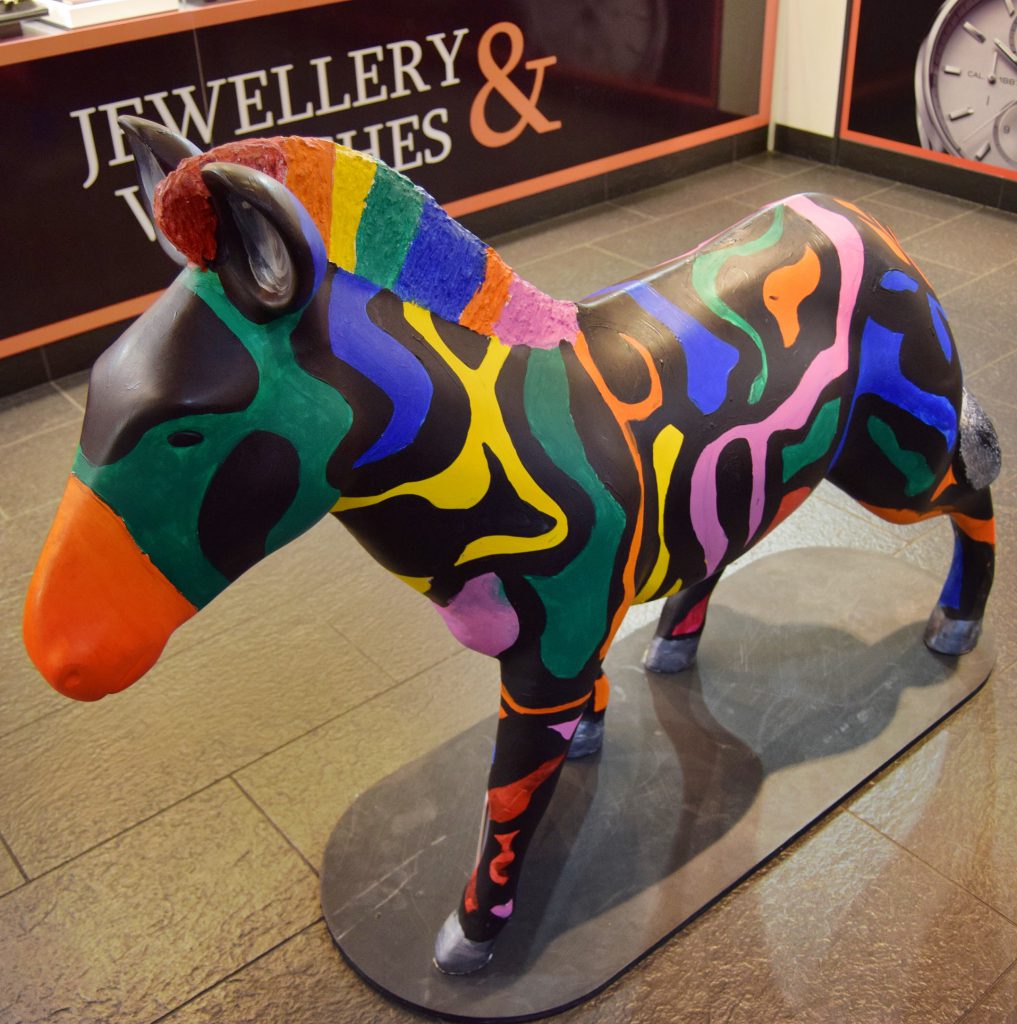 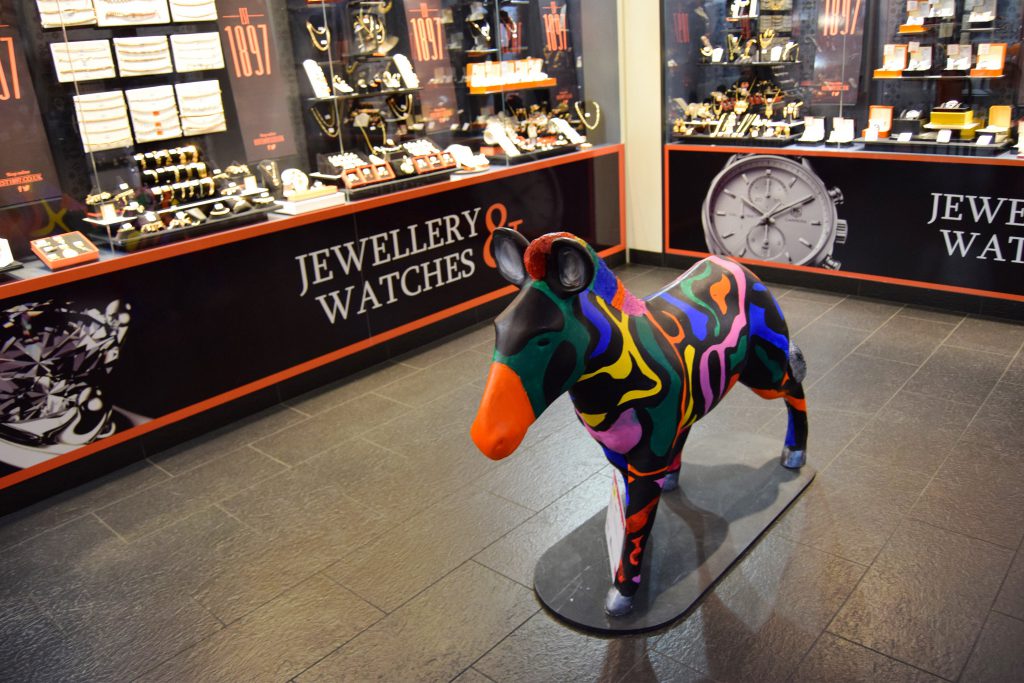 The final Marlands zebra was, Cherby, near the Above Bar entrance in the doorway of The Perfume Shop. Painted by the children of Cherbourg Primary School she’s a very glamorous young lady wearing a beautiful striped suit made from strips of pink, purle, blue and red material with zips that are open revealing her true colours. I loved the buttons on her legs and the pom-poms on her ears but most of all I loved her beautiful long eyelashes. Don’t tell anyone, but I think they may have been false! 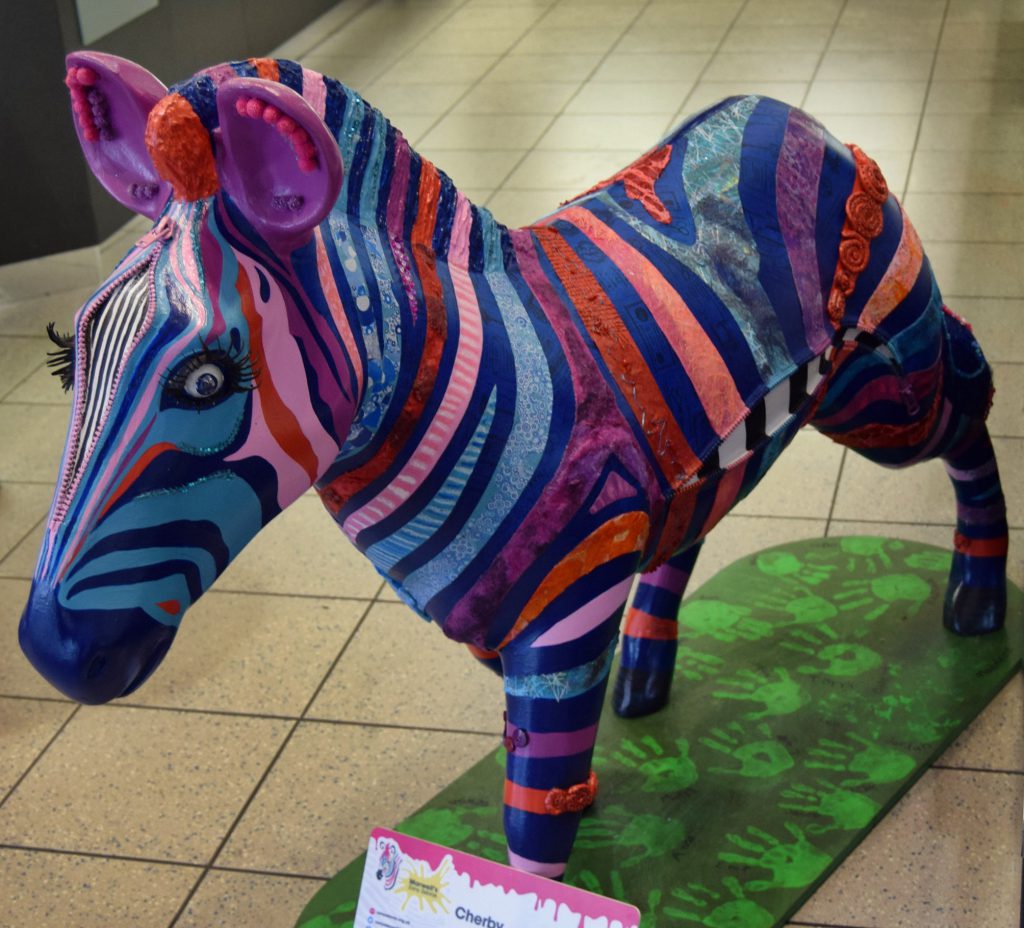 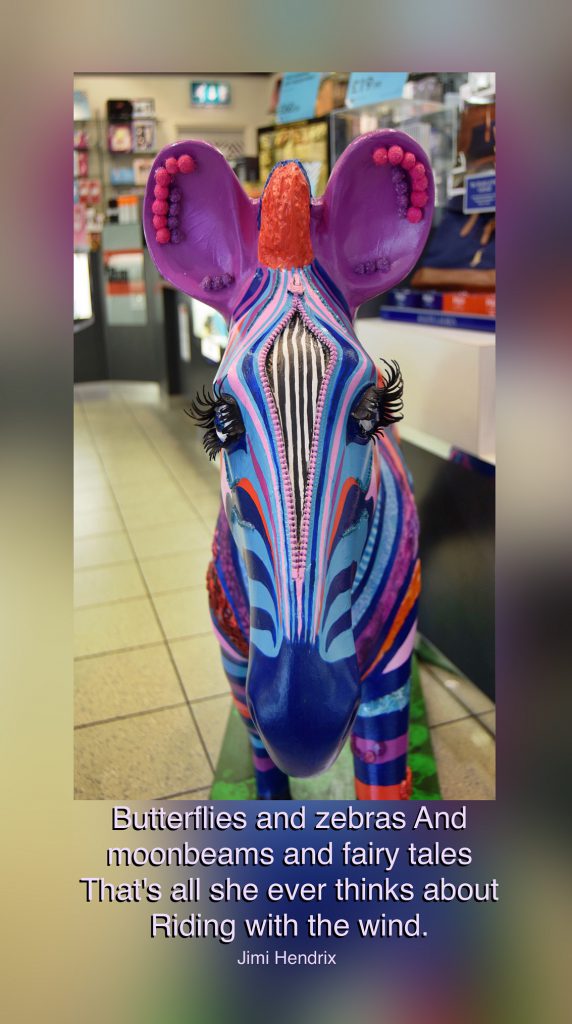 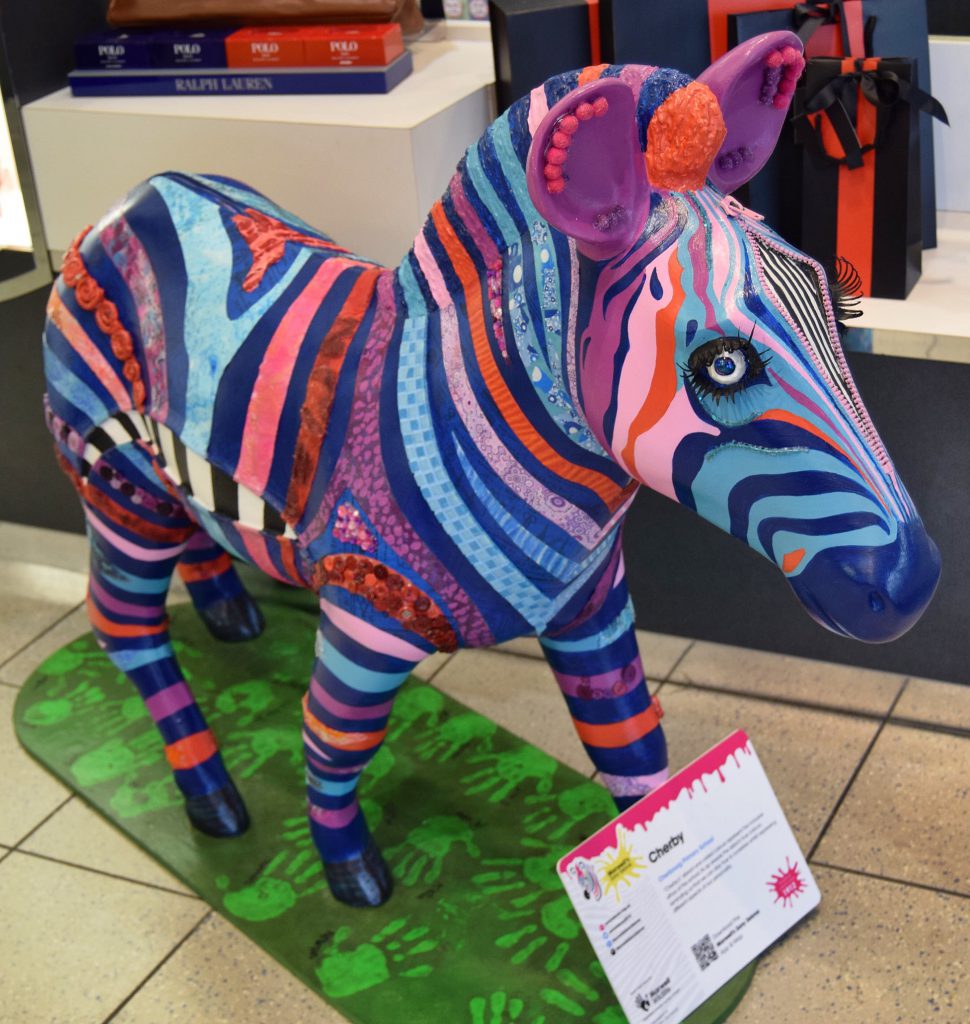 It had been a long and slightly confusing day but we’d found all the zebras we’d set out to find, plus a few surprise extras. Now the trail is very close to an end, at least for us. We still haven’t seen Ticket to Ride but, now he’s been found in the river, we hope he will be fixed up and back on the trail soon. A thorough check through the list of zebras on the app revealed we were still missing two more city zebras, Sam, who was supposed to be in East Park but wasn’t and Together We Are One, a baby zebra we’d somehow missed when we were in Guildhall Square. The latter is an easy fix, the former not so much.

Hopefully Sam’s still at the vets being repaired, just like Ticket to Ride and we’ll have a chance to see both at some point. There are also the miniature zebras, along with a giant zebra, at Marwell Zoo, but I think I’ll leave them until the children go back to school and the zoo is less crowded. After all this hard work it would be a terrible shame not to see every single one. 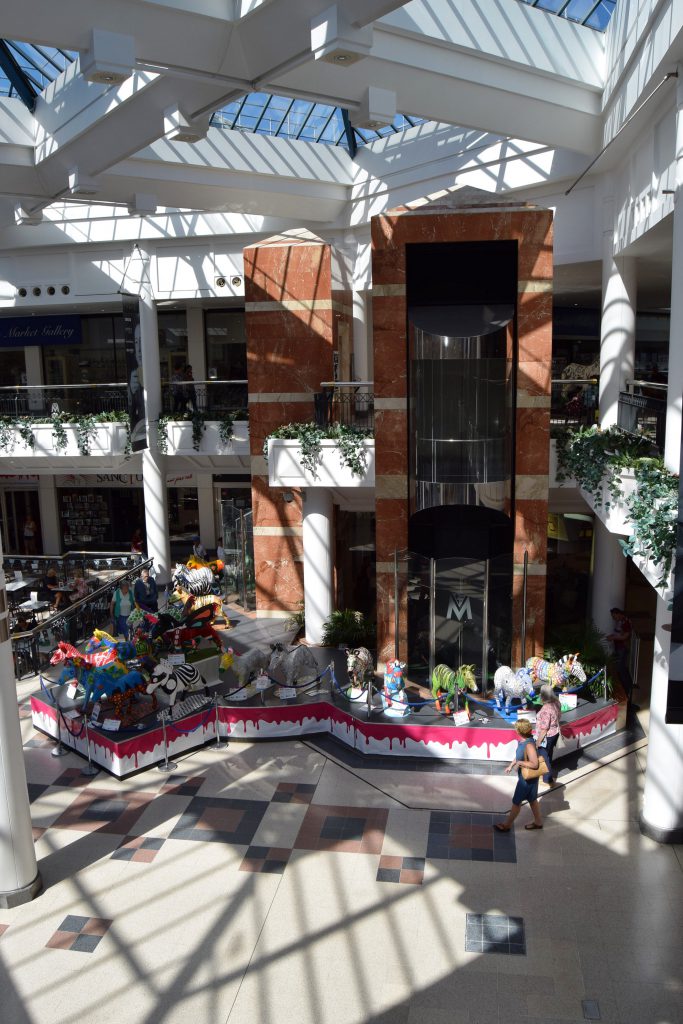 Fortified by our coffee we left Costa feeling slightly confused by the sheer number of zebras showing on the app. We stopped for a quick peek over the balcony to give ourselves an idea of the scale of the task ahead. It was daunting to say the least. Below us a whole herd of baby zebra were standing on the podium by the lifts with an adult on guard a little way off. This was going to take some time. END_OF_DOCUMENT_TOKEN_TO_BE_REPLACED 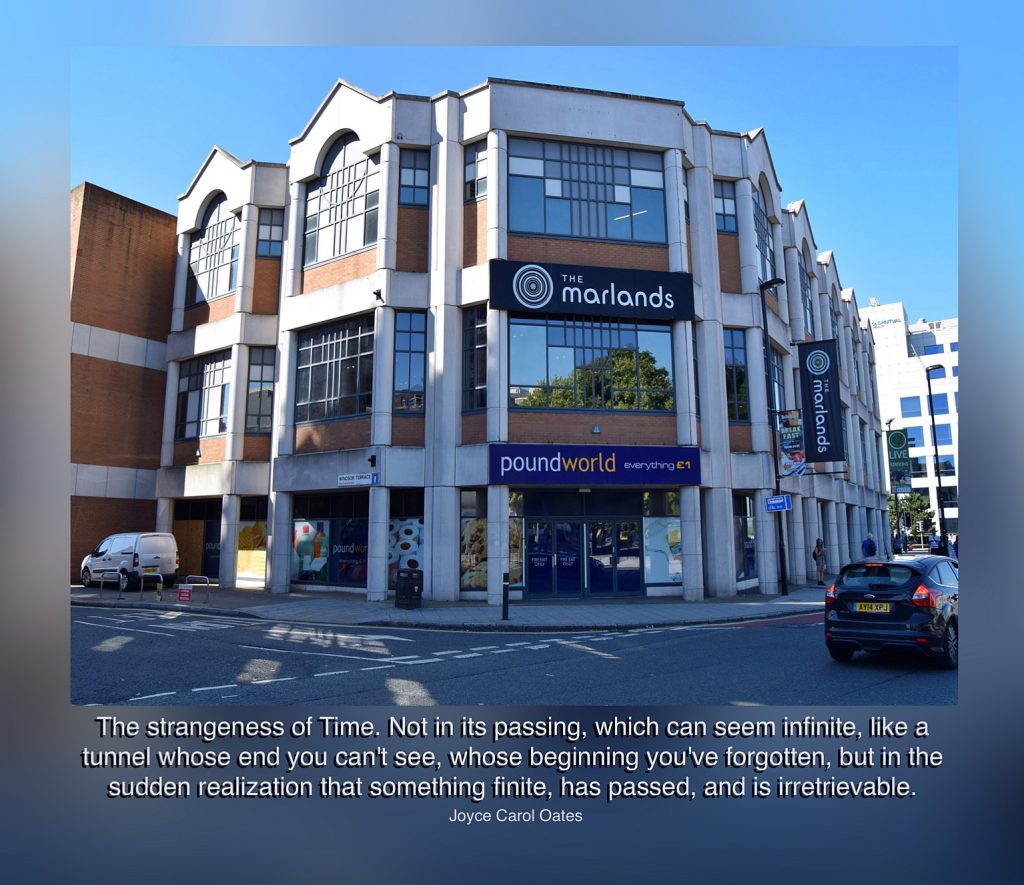 Eventually I managed to drag CJ away from the slot machines and we headed for the Marlands. In medieval times this area, including the land the Civic Centre stands on, was the site of the Magdalene Hospital for Lepers and the fields around it were called Magdalene’s Fields. The name Marlands is a derivative of this and has lived on to this day, although many people don’t realise its origin. These days it’s difficult to imagine a leper hospital just outside the town walls but, back then, lepers begging outside the Bargate must have been a common sight.  END_OF_DOCUMENT_TOKEN_TO_BE_REPLACED 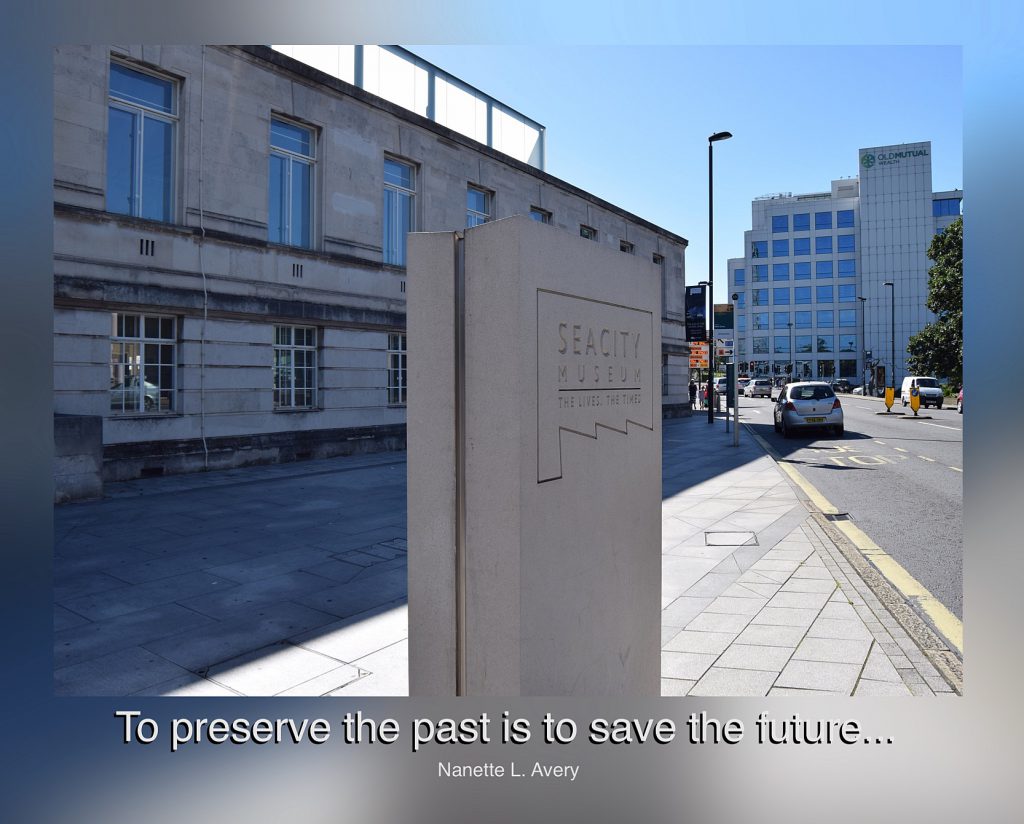 Last Thursday, Ticket To Ride, the zebra stolen from Vincent’s Walk on 6 August, was found in the Itchen, near the Southampton Water Activities Centre in the shadow of the Itchen Bridge. He was discovered by a group of children having sailing lessons with instructor Sam Spencer as they began to anchor their boat. Although he was serioisly damaged it was nothing irreparable and the Marwell team are hoping to get him fixed and back on the trail as soon as possible. We knew he wouldn’t be back yet but, today, our mission was to find the last of the unvandalised zebras in the city centre. END_OF_DOCUMENT_TOKEN_TO_BE_REPLACED 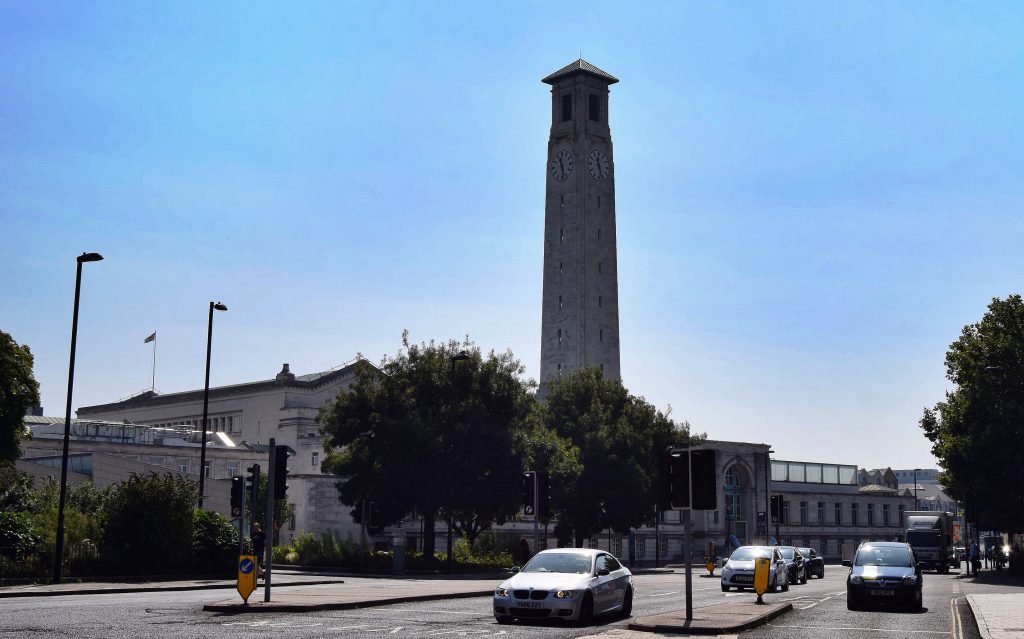 Our disappointment in the parks wasn’t quite the end of our zebra hunting. It’s quite possible my feet would have taken me on the next part of today’s walk without my brain even noticing. For more than six years my walk to work took almost the same route we’d walked so far. When I planed out this zebra hunt it hadn’t even occurred to me but now, the sights and sounds, the place we crossed the road, suddenly brought it all back.  END_OF_DOCUMENT_TOKEN_TO_BE_REPLACED 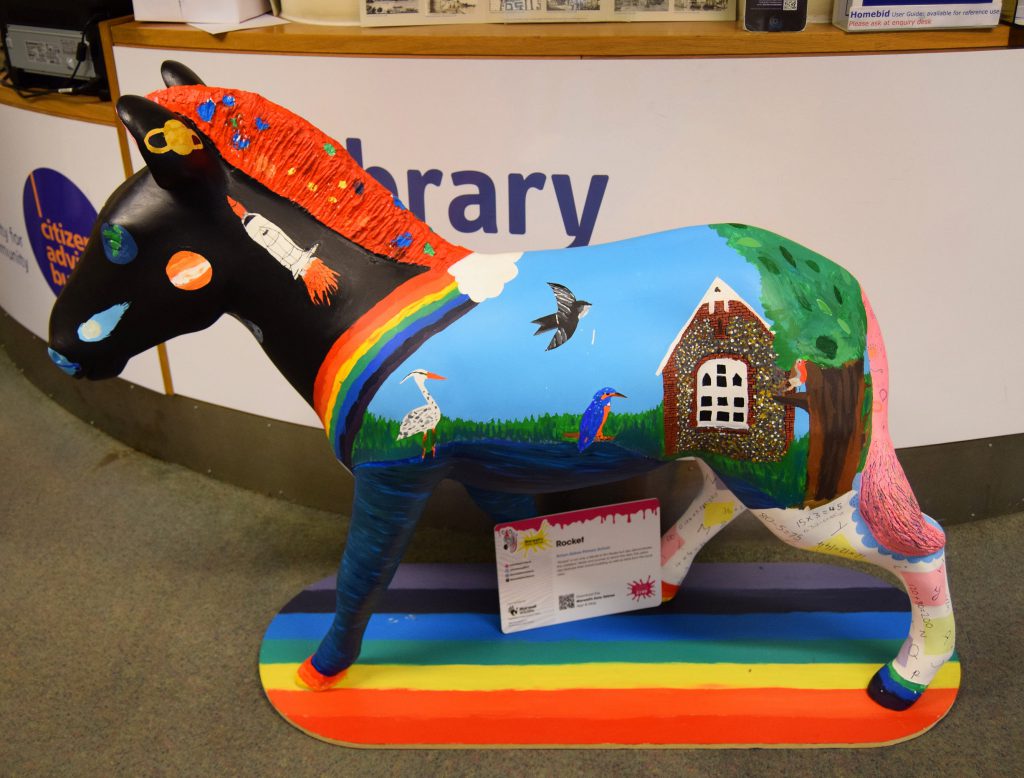 Finally I managed to drag CJ out of the art gallery and down the stairs. What I wanted to do next was go home and see Commando and his broken leg. CJ had other ideas though. We made it as far as the foyer. Then he spotted a baby zebra through the door of the library.
“How many zebras are there in the library?” he asked.
“Loads and loads,” I said with a sigh. I knew exactly where this was going and it reminded me of when he was a little boy. There were always lots of questions and they were usually designed to take me in circles until he got what he’d wanted all along.
“It probably wouldn’t take all that long to find them though, because they’re all in the same place.” END_OF_DOCUMENT_TOKEN_TO_BE_REPLACED 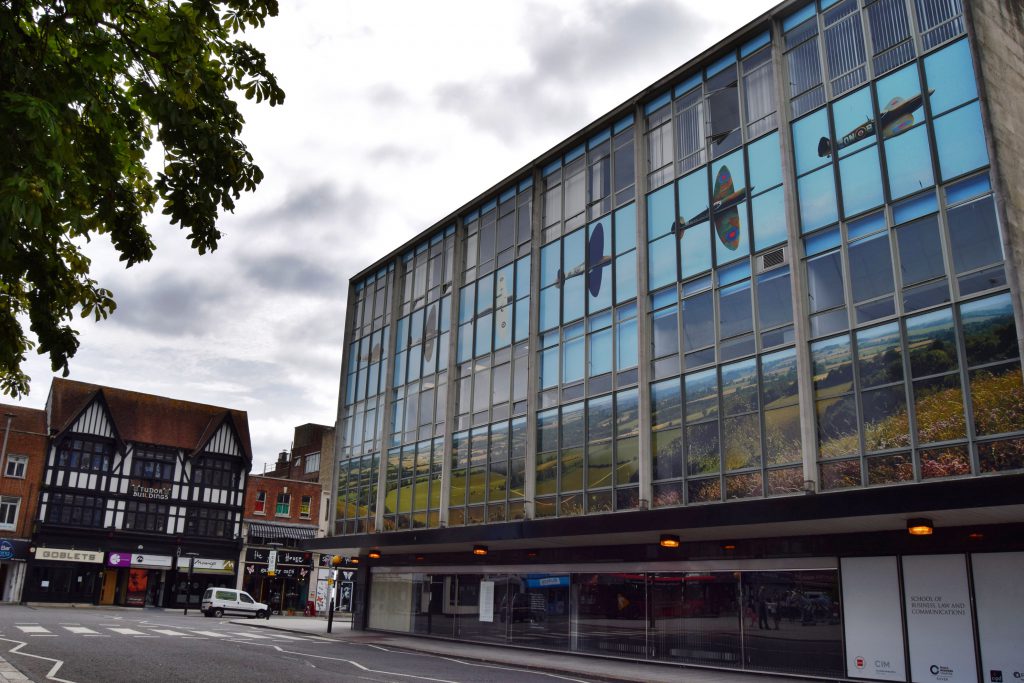 We’d seen Zebby Road, the zebra I really didn’t want to miss, and, although I’d originally planned a far longer zebra hunt, I really wanted to go home and see Commando. The news that his injury was far worse than he’d thought was a shock and he’d sounded very down in the dumps on the phone. Before we left the city centre though, I wanted to take a picture of the mural on the side of Solent University’s Sir James Matthews Building.  END_OF_DOCUMENT_TOKEN_TO_BE_REPLACED 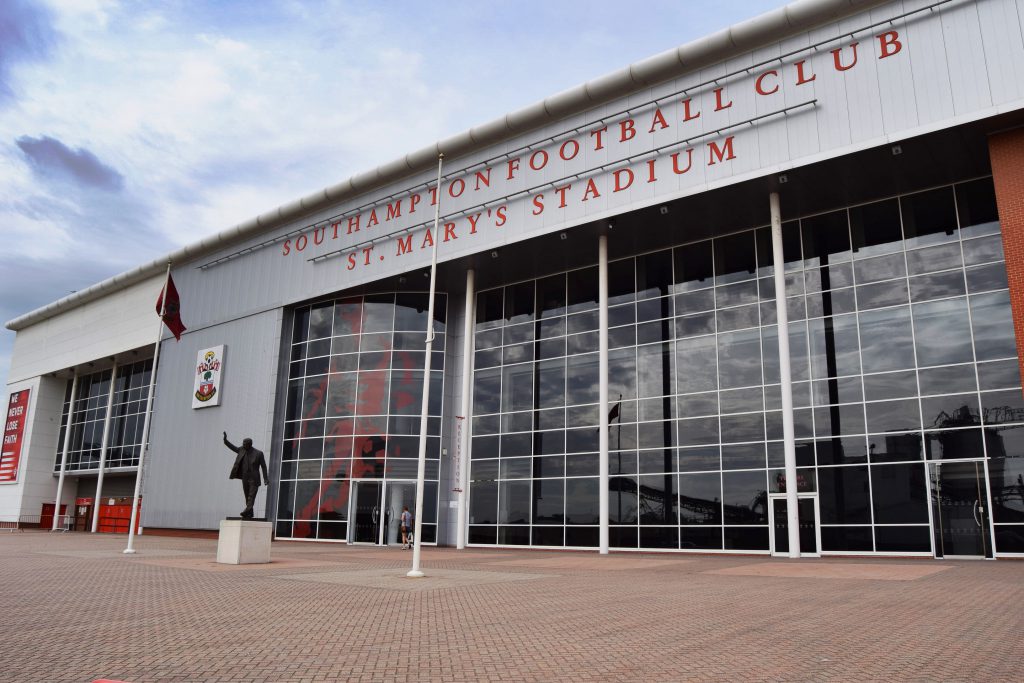 The Vandals were an East Germanic tribe who are believed to have migrated from Southern Scandinavia during the second century BC. They moved around Europe establishing kingdoms and were, reputedly, barbarians who sacked and looted as they went. They gave their name to vandalism, or senseless destruction, particularly defacing artwork. Sadly, there are modern day vandals roaming around the city of Southampton. Some of them are also thieves. Not only have several of our lovely zebras been damaged, one has actually been stolen. This added a sense of urgency to our zebra hunting and today, while Commando went for his X-ray, we went to visit as many as we could while they were still there.  END_OF_DOCUMENT_TOKEN_TO_BE_REPLACED