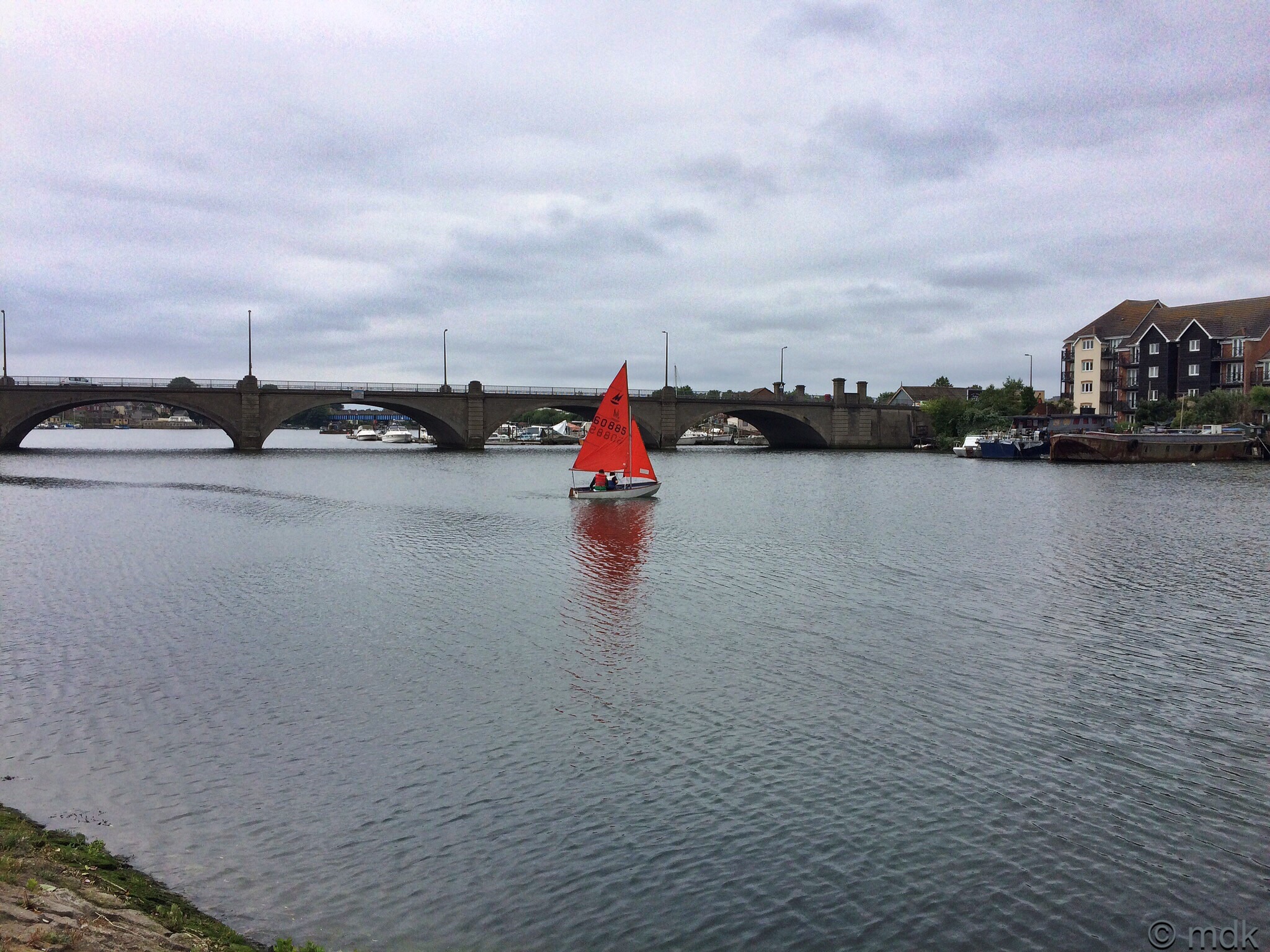 Sunday morning was a dull affair and, while Commando did his ten mile run training for Toronto in October, I set off for the river wondering what happened to spring, which is almost summer after all. There was at least some colour, provided by the bright sails on a boat close to Cobden Bridge, in fact there were several of them slipping through the greyish water. Being Sunday, Riverside Park was crowded with runners, dog walkers and people feeding ducks despite the grey sky.

Close to the jetty a row of ducks were lined up along the bank and I wondered, not for the first time, why there have been no ducklings yet this year? Maybe it’s the strange weather and the almost total lack of spring, unless you count an April that felt more like summer. Perhaps the ducks are confused. On the other side of the jetty there were rowers and a row of swans floating happily, each with one foot in the air. This is something they do to regulate their body temperature, the large surface area of their webbed feet absorbing heat or dispersing it, depending on the ambient temperature. Right then I was pretty sure they were trying to keep warm rather than cool off. 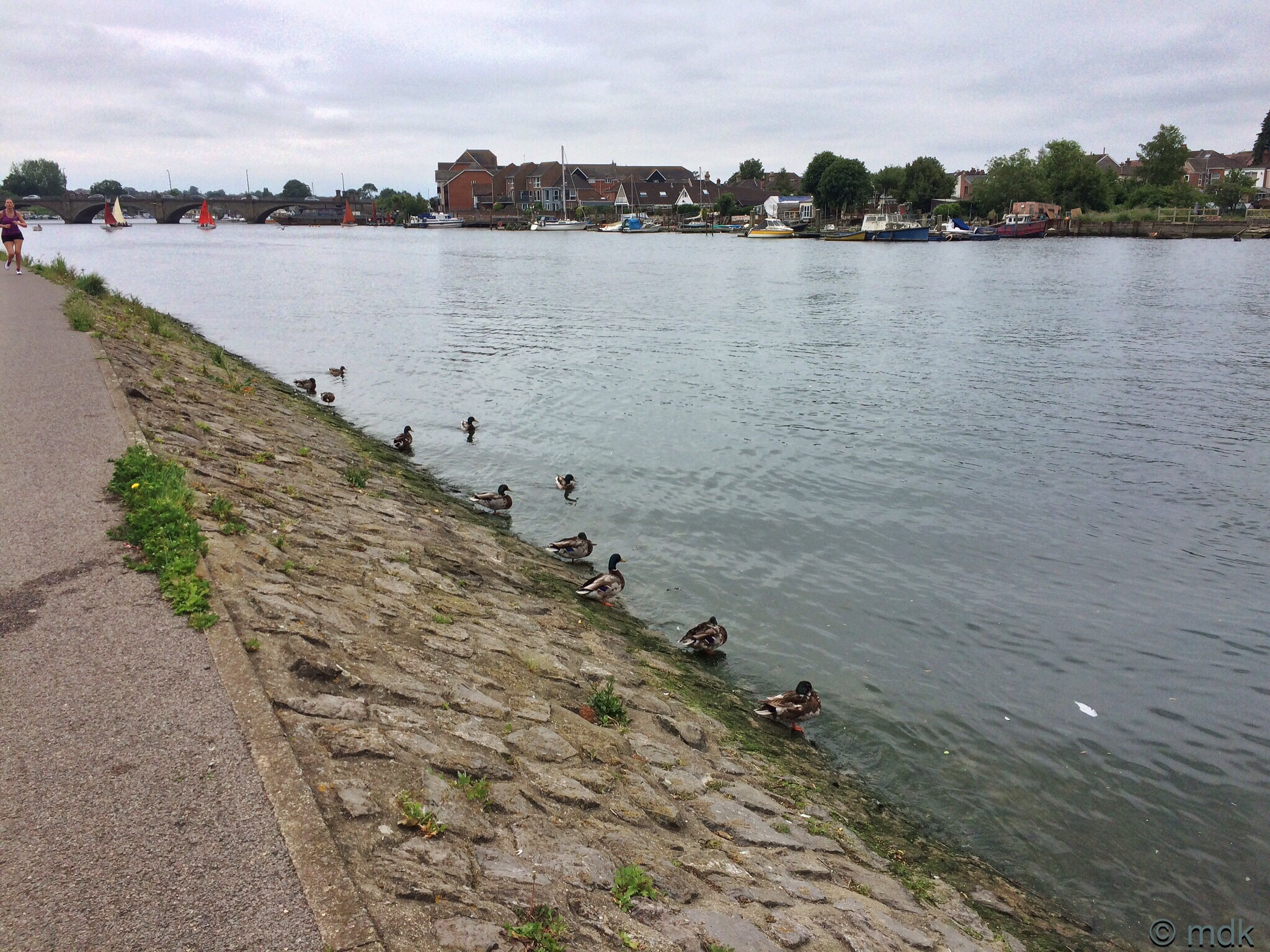 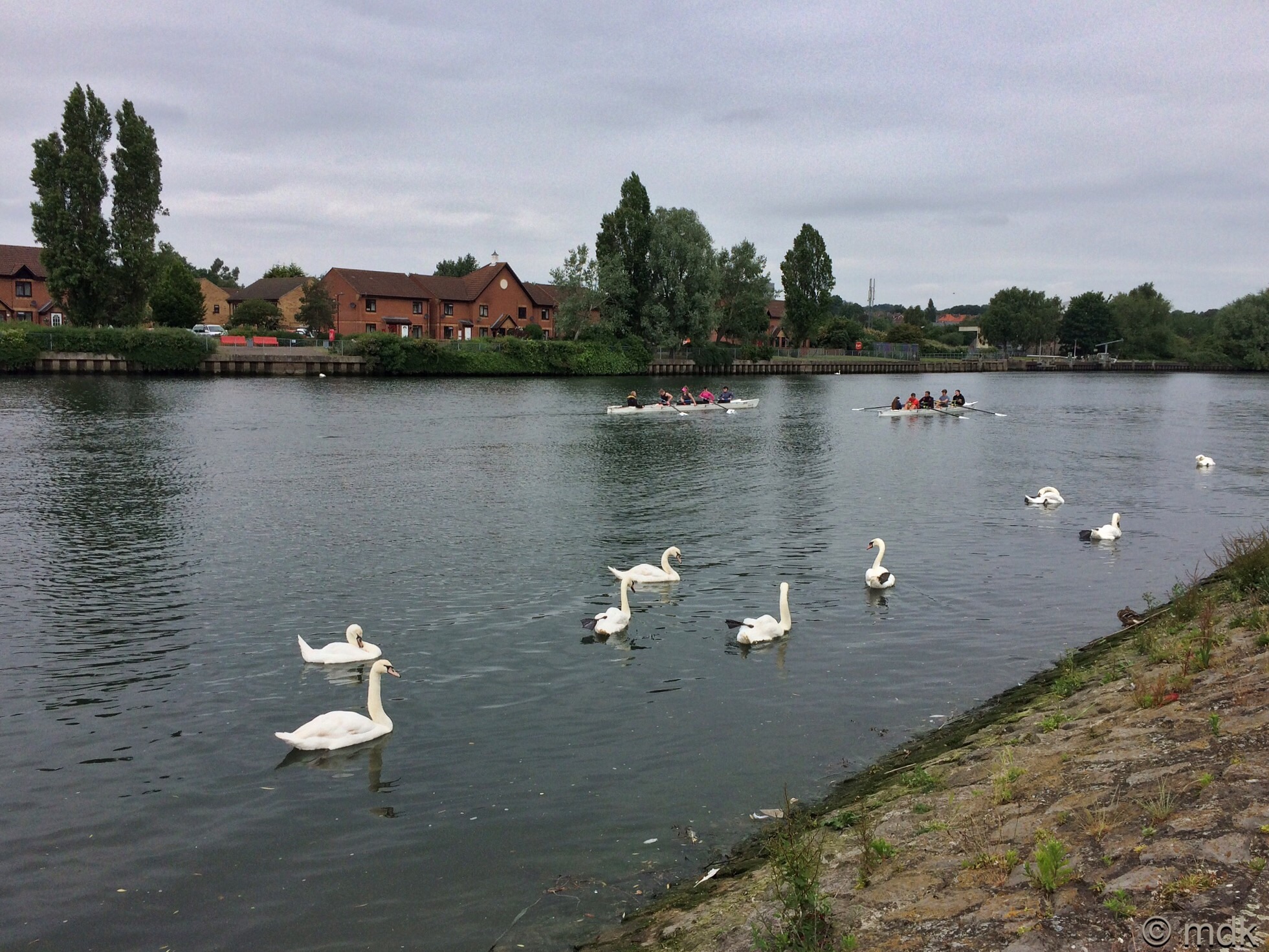 Musing on this and the lack of baby birds of any kind, I wandered on, trying to form a plan for my walk. Maybe I’d take the Monks Brook Meadows Path to Lakeside and see if there were cygnets and ducklings there. Then again, I could walk the first part of the Navigation and test out my theory about the trail leading to Eastleigh near the old carriage works. Two women were walking towards me and, at first, I was so absorbed in my plans I didn’t pay them much attention.

We were almost on top of each other before I realised one of the women was Gilli, an old friend. Gilli and I go way back, I met her at her big sister’s birthday party when I was about six and we worked together at British Rail. She was also my partner in crime back in the days when we went to the White Swan together most nights and she ended up being my lodger when I bought my first house. It’s been a while since I last saw her so we stopped for a catch up.

“I’m training for Race For Life,” she told me, “are you doing it again this year?”
The last time we bumped into each other was last year in the middle of the Race For Life and I had to admit that I hadn’t signed up for it this year. “I guess there’s still time,” I said, “maybe I will.”
After a little chat we all went our seperate ways, she was off to check out the toilets at the Triangle and I still didn’t quite know where I was going. Now I added wondering if I should sign up for RFL to my list of things to think about. Before I knew it I was at Woodmill where three young men were just about to take to the water in canoes. 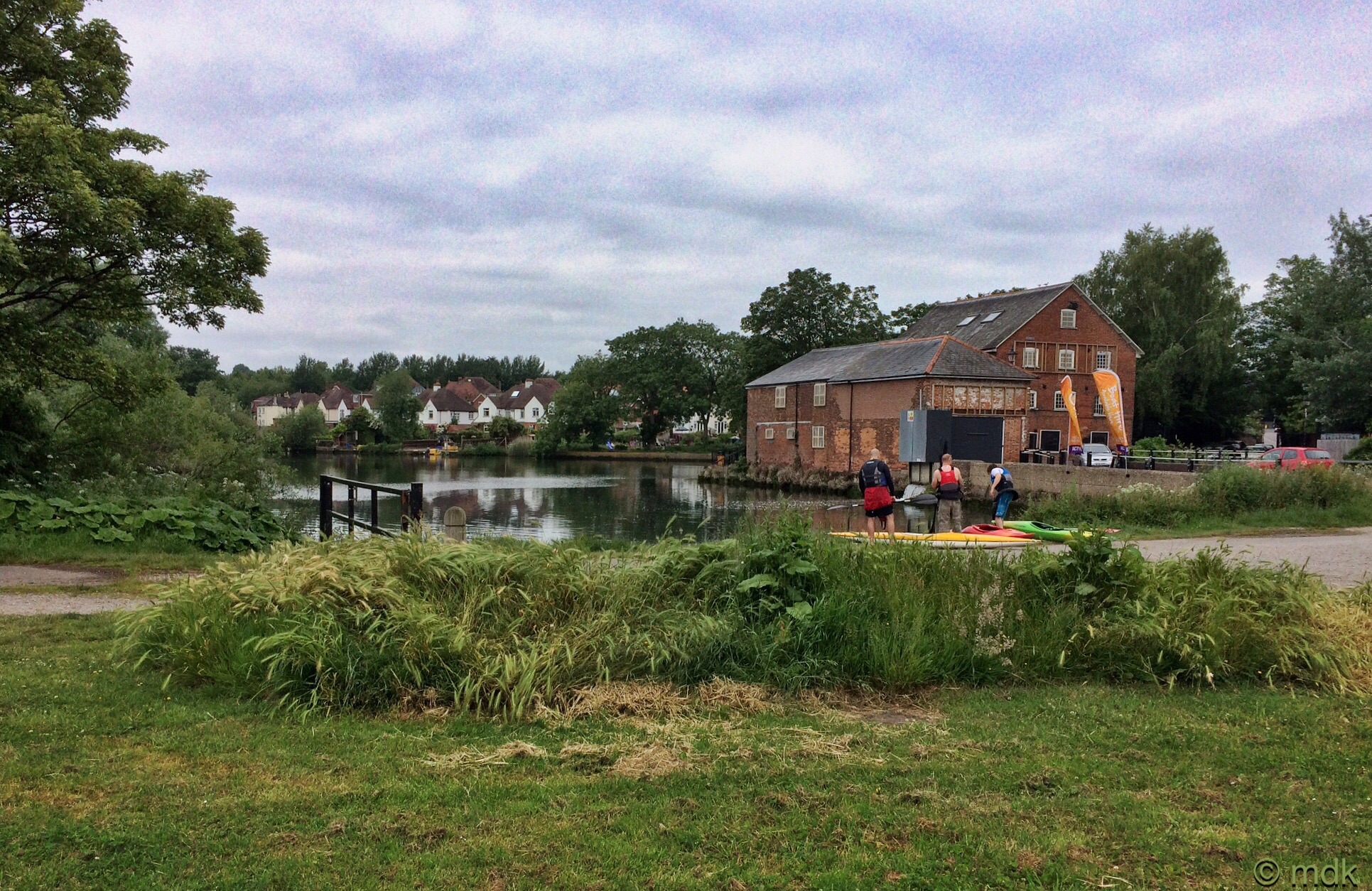 By the time I got to Mansbridge I’d decided on the Itchen Navigation, Eastleigh option and then Lakeside and back via Monks Brook Meadows. I hadn’t made a decision about RFL. On the other side of the new road bridge, where the river turns towards the White Swan there was a swans nest. For a little while I stood, hoping to see some cygnets but the pen stayed firmly on the nest so I don’t think they’ve hatched yet. 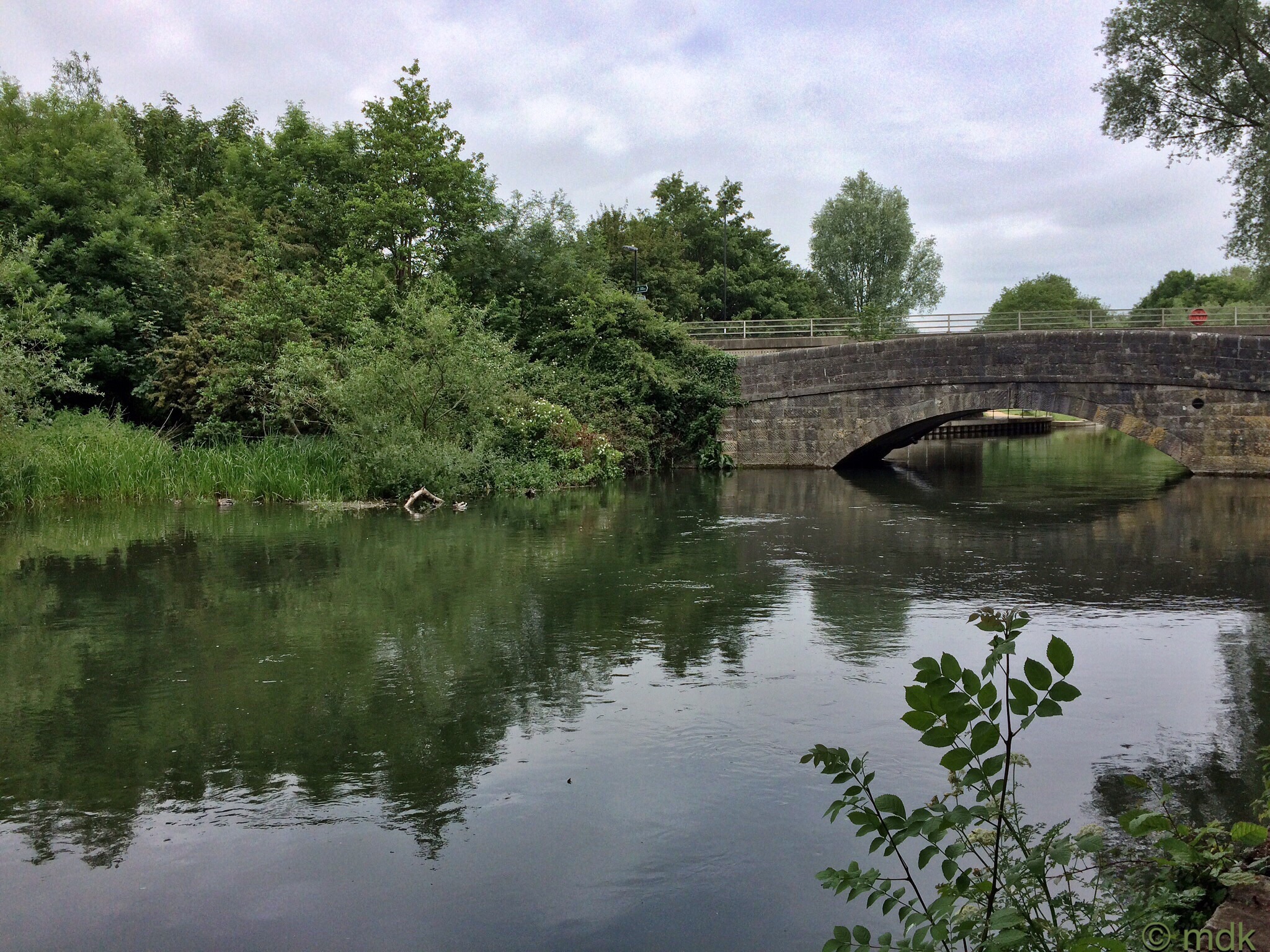 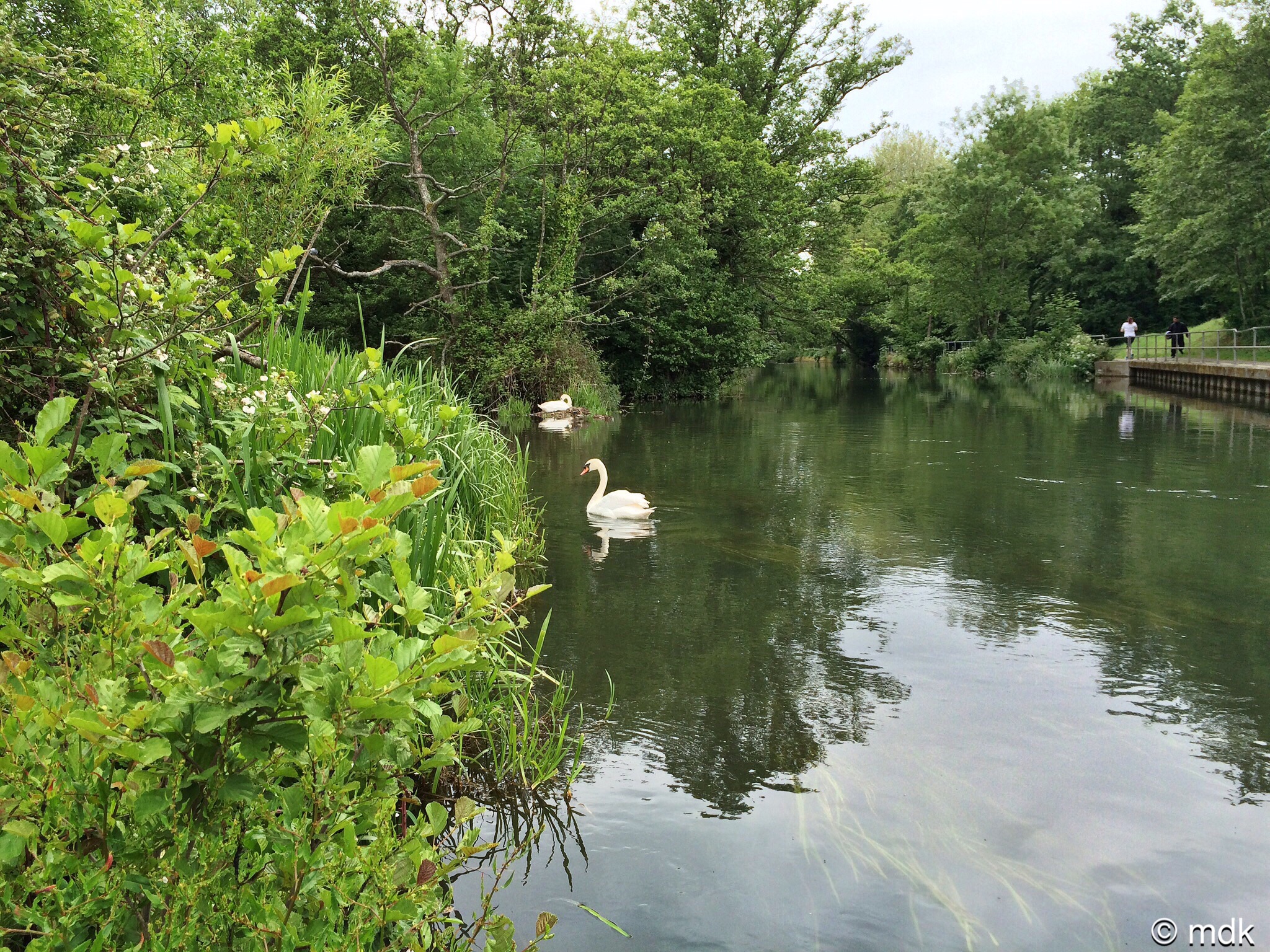 Pleased that there was at least one nest at this end of the Itchen, I carried on to Mansbridge weir and the beginning of the Navigation. There seemed to be more water than usual in the  disused lock. This is testament to the amount of rain we’ve had and the lack of sun to evaporate it. Passing the first triangular marker I carried on towards the motorway diversion. 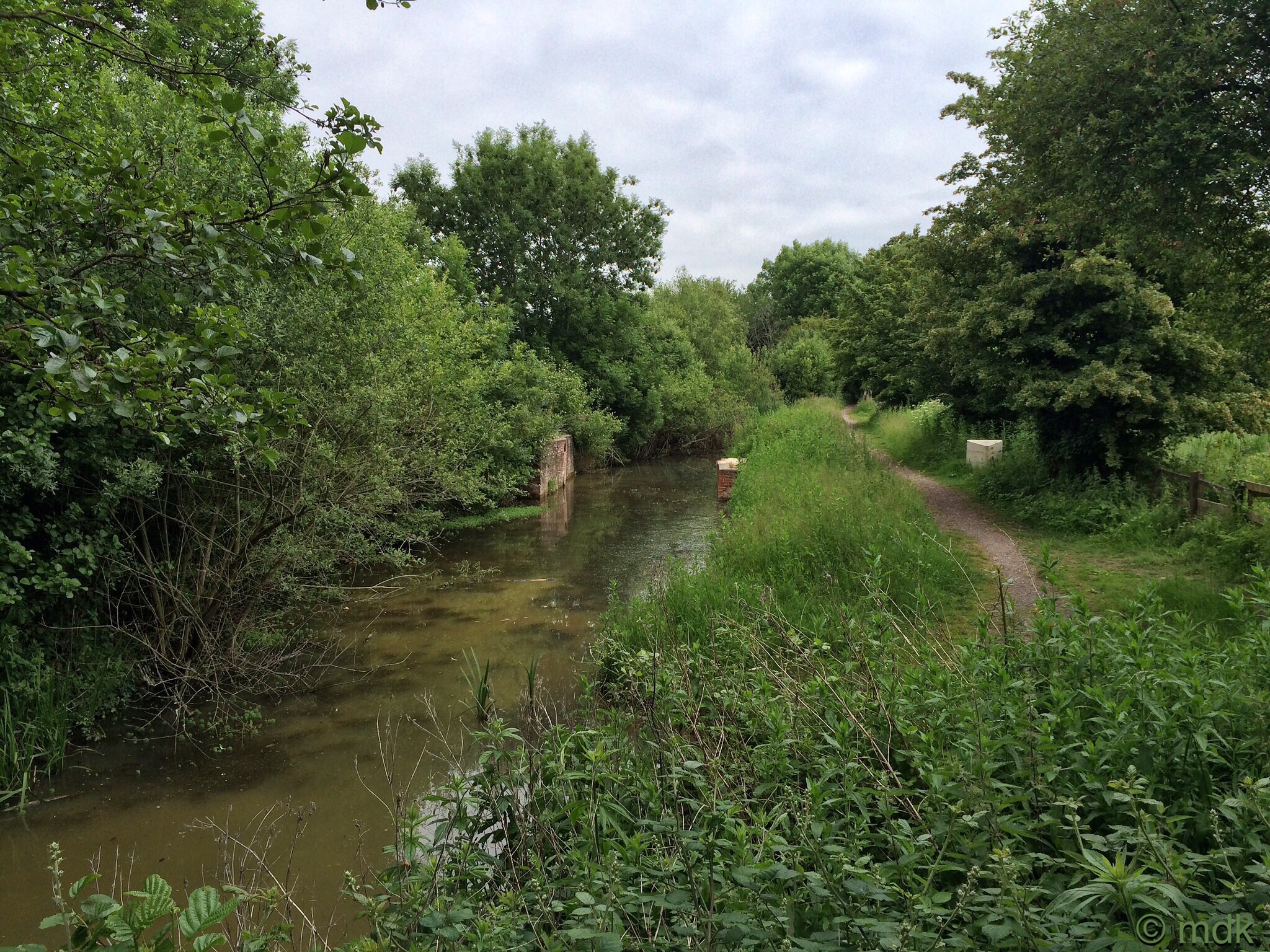 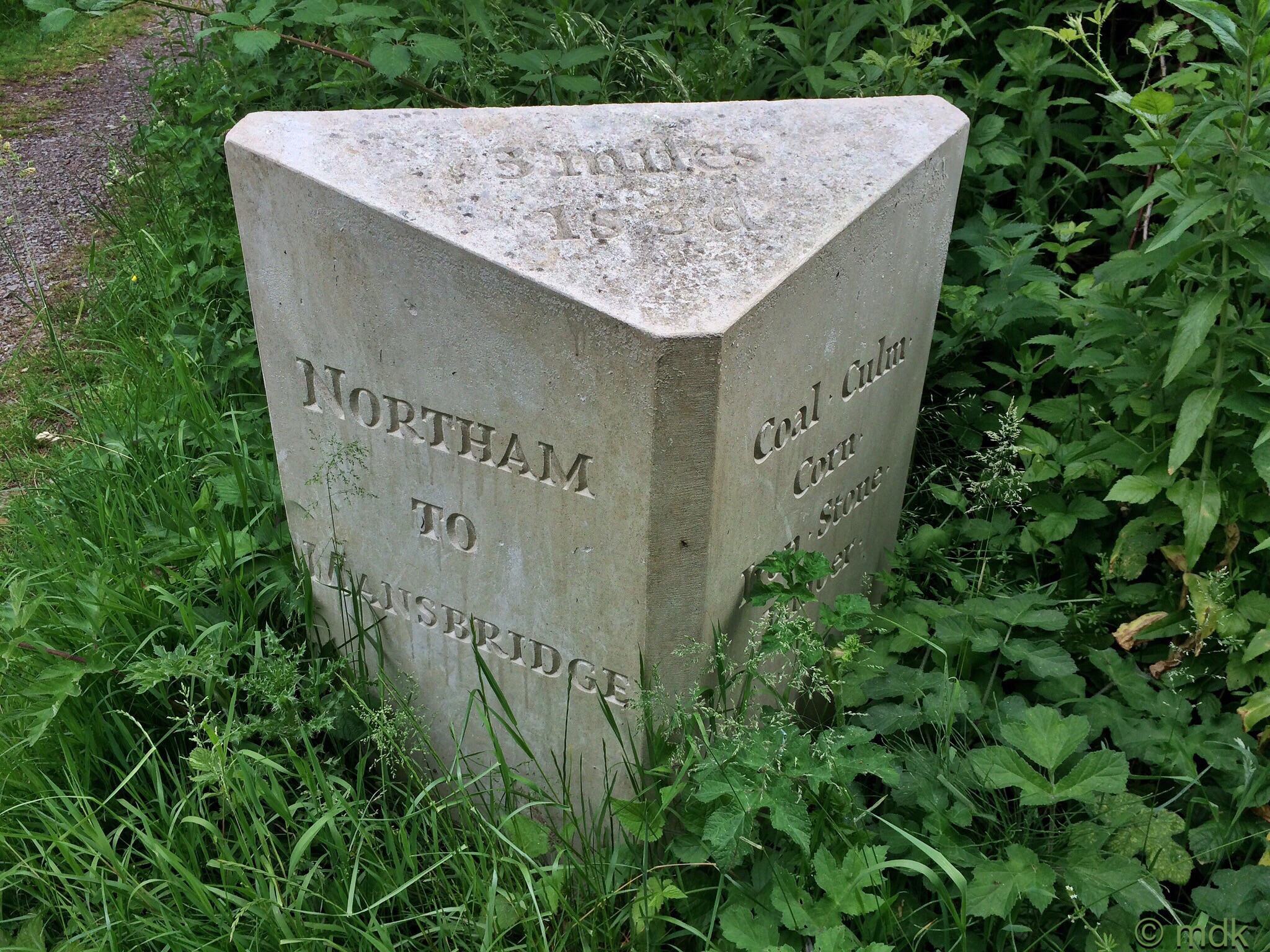 This is not my favourite part of the trail with the noise of the motorway just behind the trees but I stopped to capture some oxeye daisies and a metalic green beetle. Google tells me this was a thick legged flower beetle, Oedemera nobilis, they feed on pollen and are usually seen between April and August.  When I spotted white clover flowers I stopped again. A little further on I noticed yellow goats beard and crouched to take a picture.

As I stood up I saw a cyclist in a high vis jacket had stopped because I was blocking the narrow trail with my bum.
“Sorry for getting in the way,” I said, moving to the side of the path to let him pass.
“Are you taking pictures for your blog?” the cyclist asked.
“As it happens I am,” I said, wondering if he knew me or it had been some kind of fluke lucky guess.
“Are you still writing it only I haven’t see it for a long time?”
“I am. I write more or less every day.”
“Oh, the last post I saw was about the broken wall on the shore but that was last year. When I saw you taking pictures of the wildflowers I thought, ‘that must be the lady who writes the blog,’ then I didn’t know whether to say anything or not.”
“That was my old blog,” I explained, “it was hacked so I had to start over again.”
“I shall have to look for the new one. I enjoyed reading it.”
“Um, I’m sorry to be rude but do I know you?” I asked, wondering if he was one of the people who commented or someone I’d actually met on one of my walks.
It turns out he is one of the leaders of the Southampton Sky Ride and also leads local walks.

We spent a while chatting about different walks and he made a few suggestions about places I would enjoy walking.
“Are you off to the Itchen Valley Meadows?” he asked, “I’m leading a walk there this afternoon.”
“Actually I was going to Eastleigh and Lakeside looking for cygnets, but I might just change my mind,” I said.
“There were some cygnets on the river by the White Swan the other day,” he told me.
As he cycled away I was mentally recalculating my route, not quite decided which to take. On the one hand the meadows would be full of wildflowers and I hadn’t visited them for a while, on the other, there might be cygnets at Lakeside and I hadn’t seen any at this end of the river so far. Decisions, decisions. 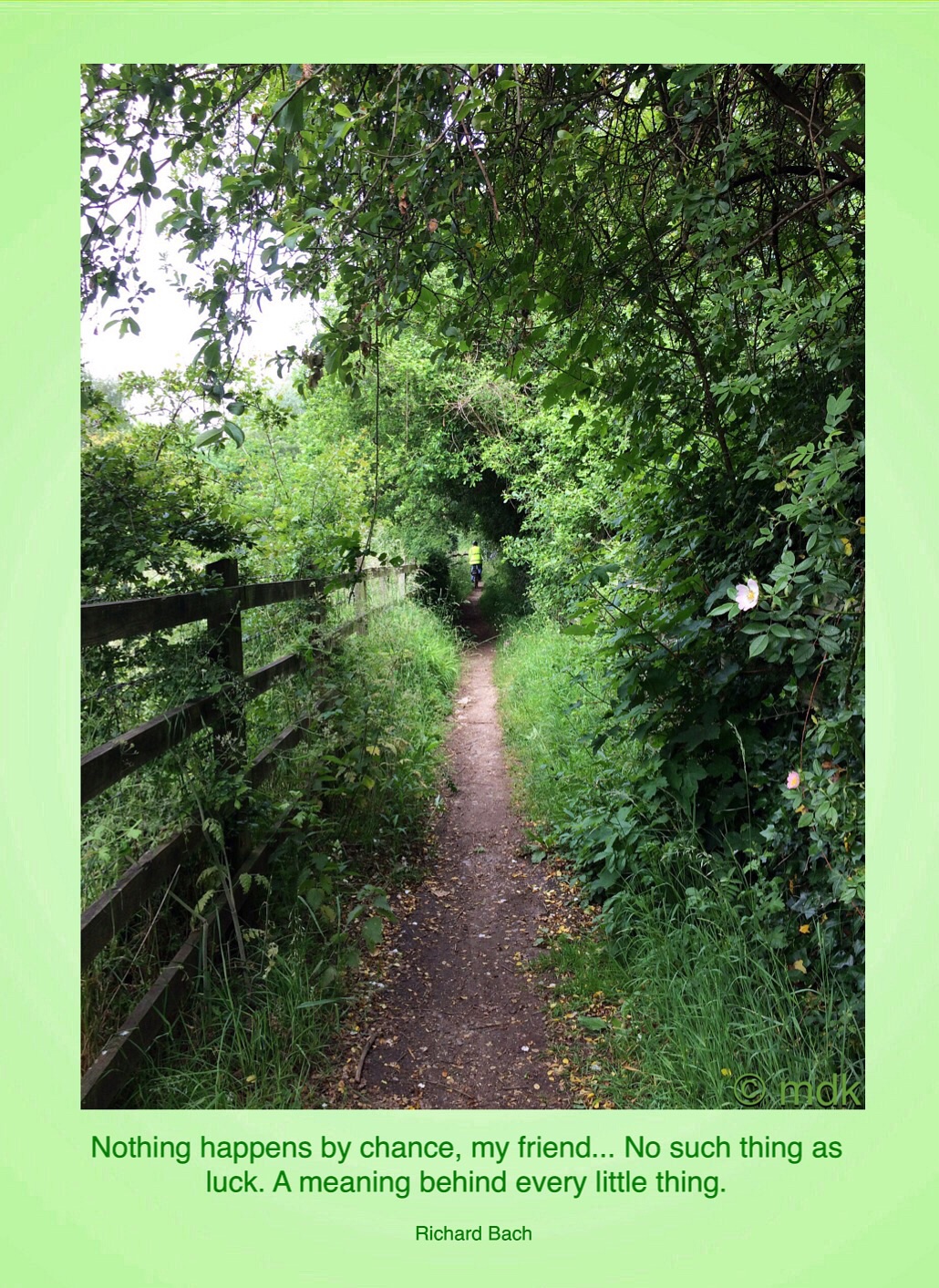 Writing is a solitary process, much like my walks, so, when I meet someone who reads my ramblings, it seems strange that there are people out there who know me so well when I don’t know them at all. In a way it was flattering to be recognised by someone who obviously enjoyed my writing but it was also slightly disturbing to be so recognisable. As I walked on beside the motorway I mused on this and wondered if there were other people who recognised me but didn’t say anything. It felt a little odd to think about, so instead I wondered where to go next and changed my mind every few steps.

When I came to the first gate leading to the meadows I was still determined to stay on the Navigation and passed it by. This may have had something to do with the sign warning of cows grazing in the field, although I couldn’t see any. On the other side of the motorway bridge I came to the next gate that leads from the Navigation to the Itchen Valley Meadows. At this point I wavered. Meadows or Navigation? Maybe I’d just go inside and sit by the river for a moment to make up my mind. 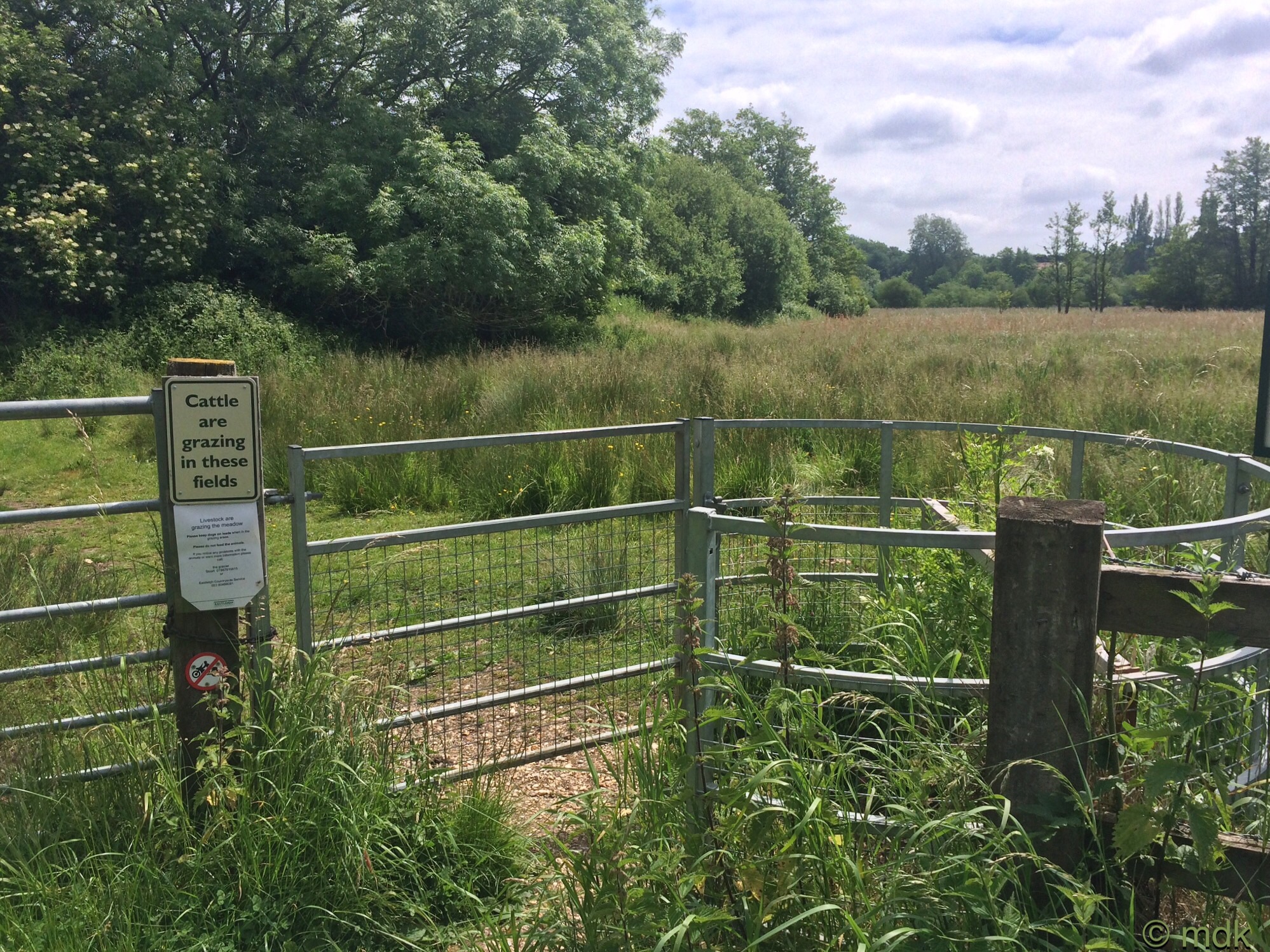 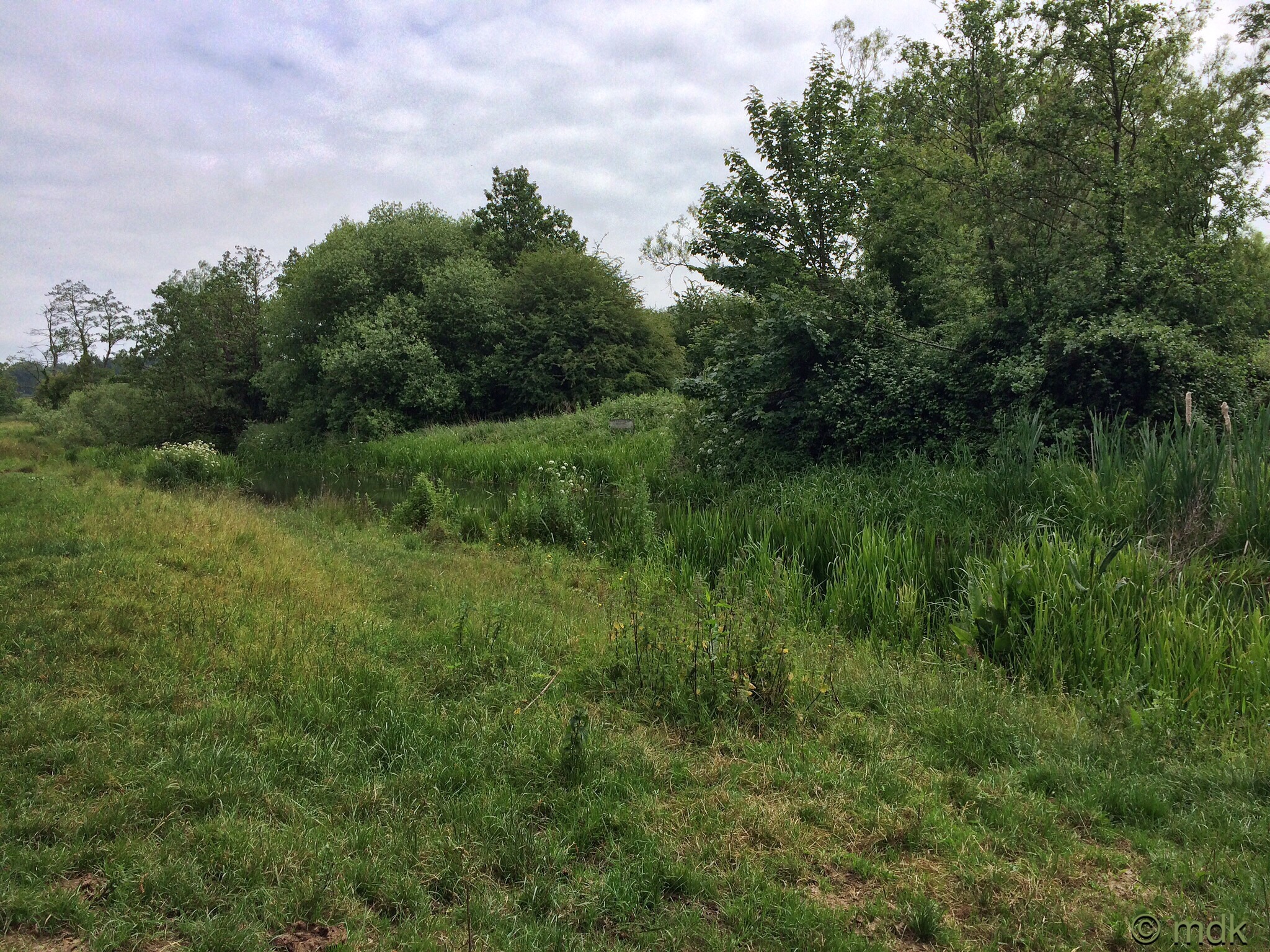