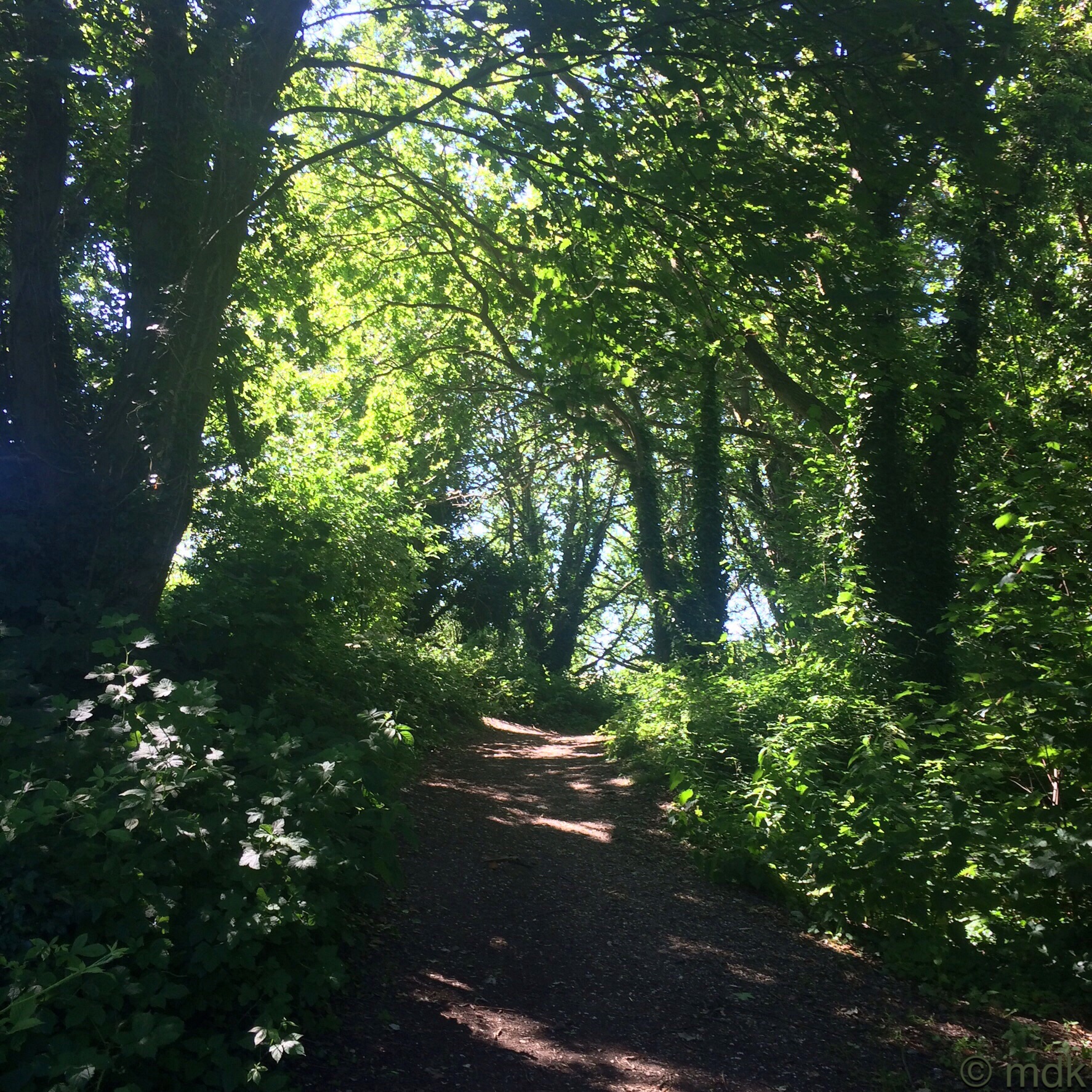 The last walk of June was going to be hot, hot, hot, at least according to the weather forecast which predicted temperatures in the high twenties. It seemed the sensible thing to do would be head for the shore where there would be sea breezes to cool me down. As it happened there was something interesting I’d been meaning to check out in Hamble anyway, the only problem was I wasn’t exactly sure how to get to it. Still, not knowing where I’m going has never stopped me before.

Luckily I had a little help from one of Commando’s work mates who was brought up in Hamble so I left home armed with a vague idea of where to go. Slathered in sun lotion with an ice packed water bottle and two small chocolate milkshakes in my ruck sack I set off. Even in the early morning it was warm and I was glad to get away from the heat of the streets to the shade of Peartree Green. When I spotted a wild scabious, albeit a rather scorched and dry looking one, along sea road I was even gladder although I knew I’d soon be back in the glare of the sun again. 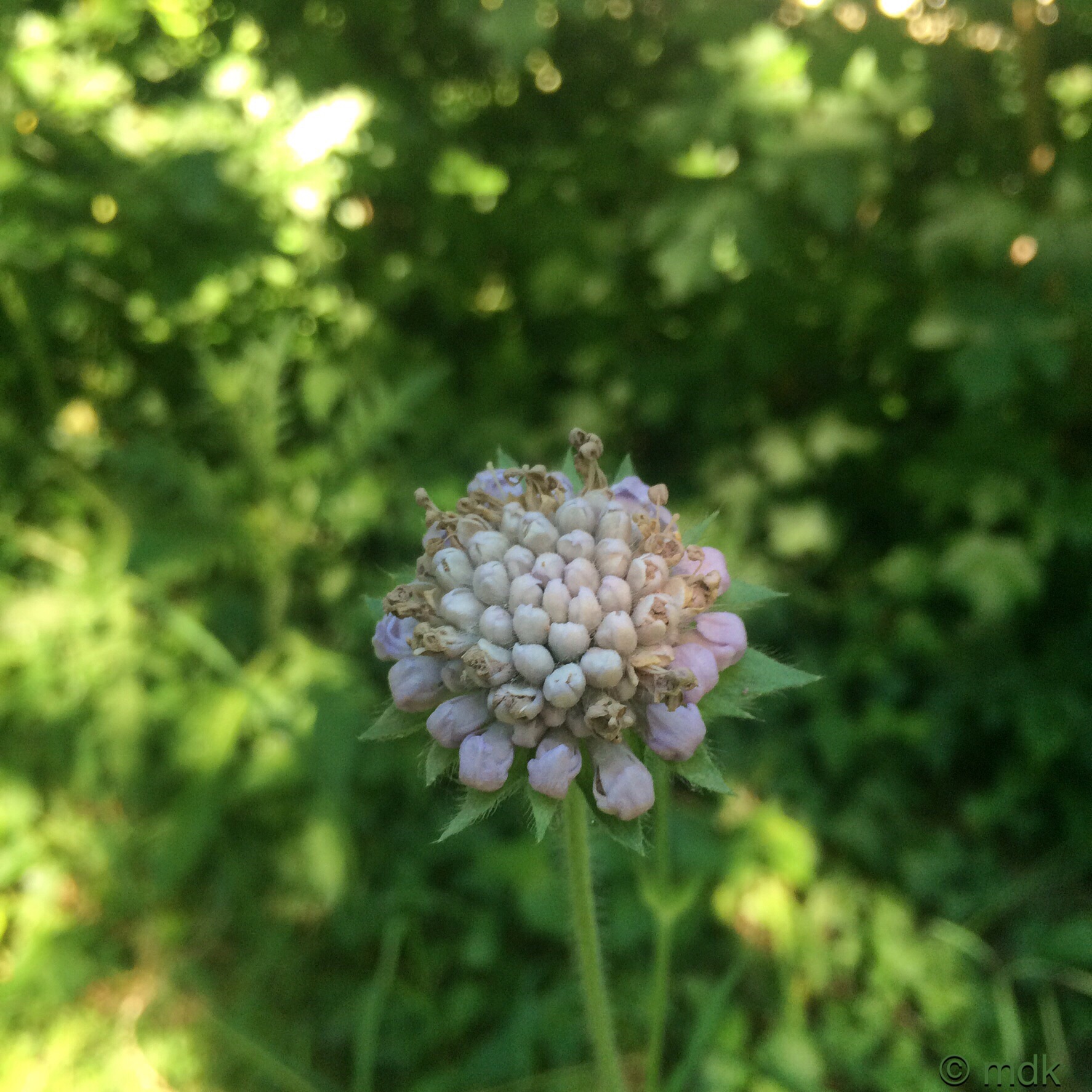 Before I braved the heat of the streets I had a water stop on one of the benches on the corner of the green. The views over the city are wonderful and, as I sipped my icy cool water I tried to name them all. As I got up to go I noticed a sign that did just that so I could have saved my energy. At this point I had two choices, walk over the railway bridge, under the Itchen Bridge and through Woolston or under the railway bridge to Itchen Ferry Village and the slightly longer route close to the water.

The water won, mostly because I thought it would be cooler. It had the added advantage of a superb view of the bridge and some thistles growing beside a wall. If only I’d waited I could have had my water stop on the bench there instead.  After that it got a touch on the warm side as I couldn’t avoid the streets so I marched on thinking of the shore and a cool breeze. 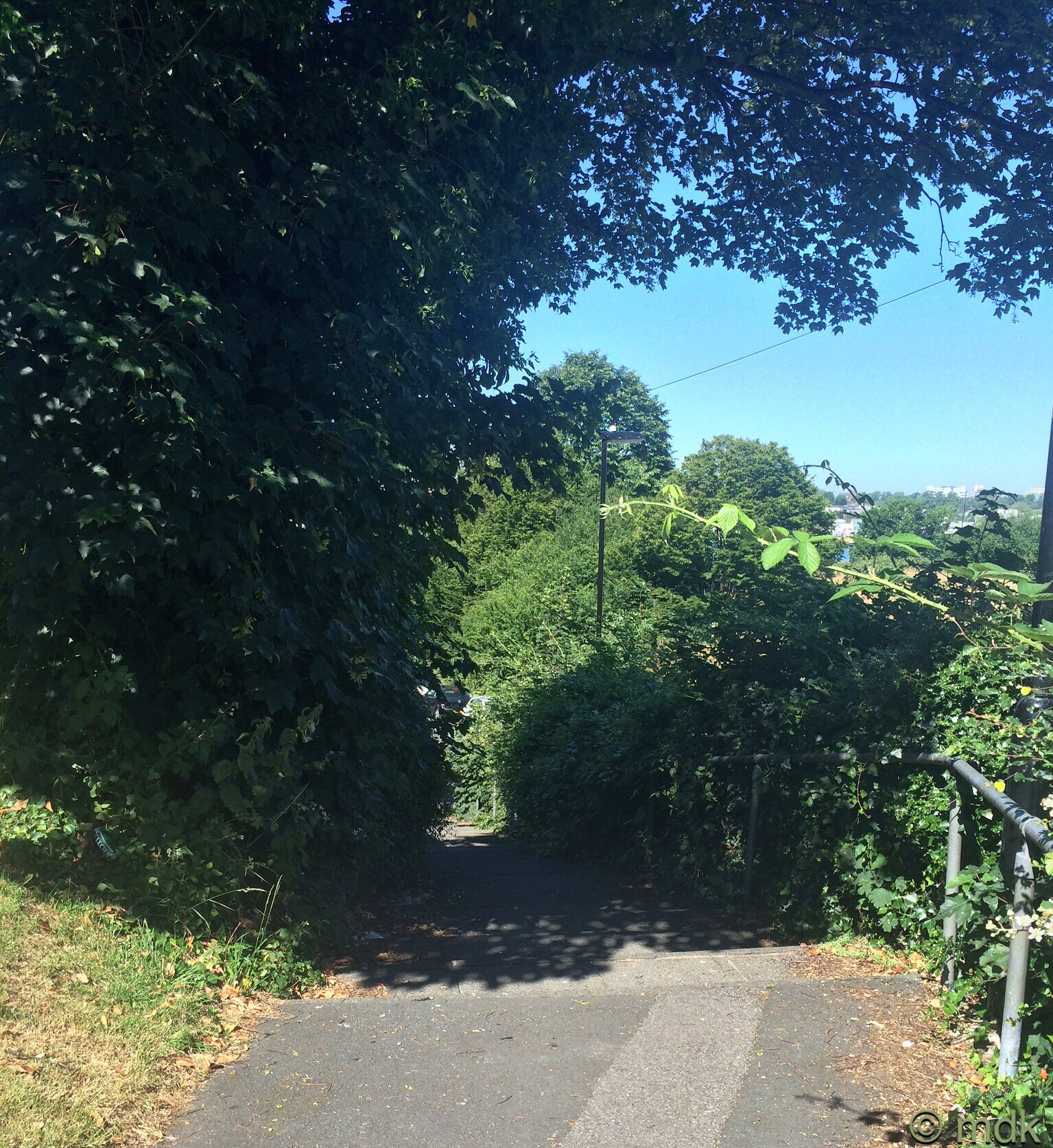 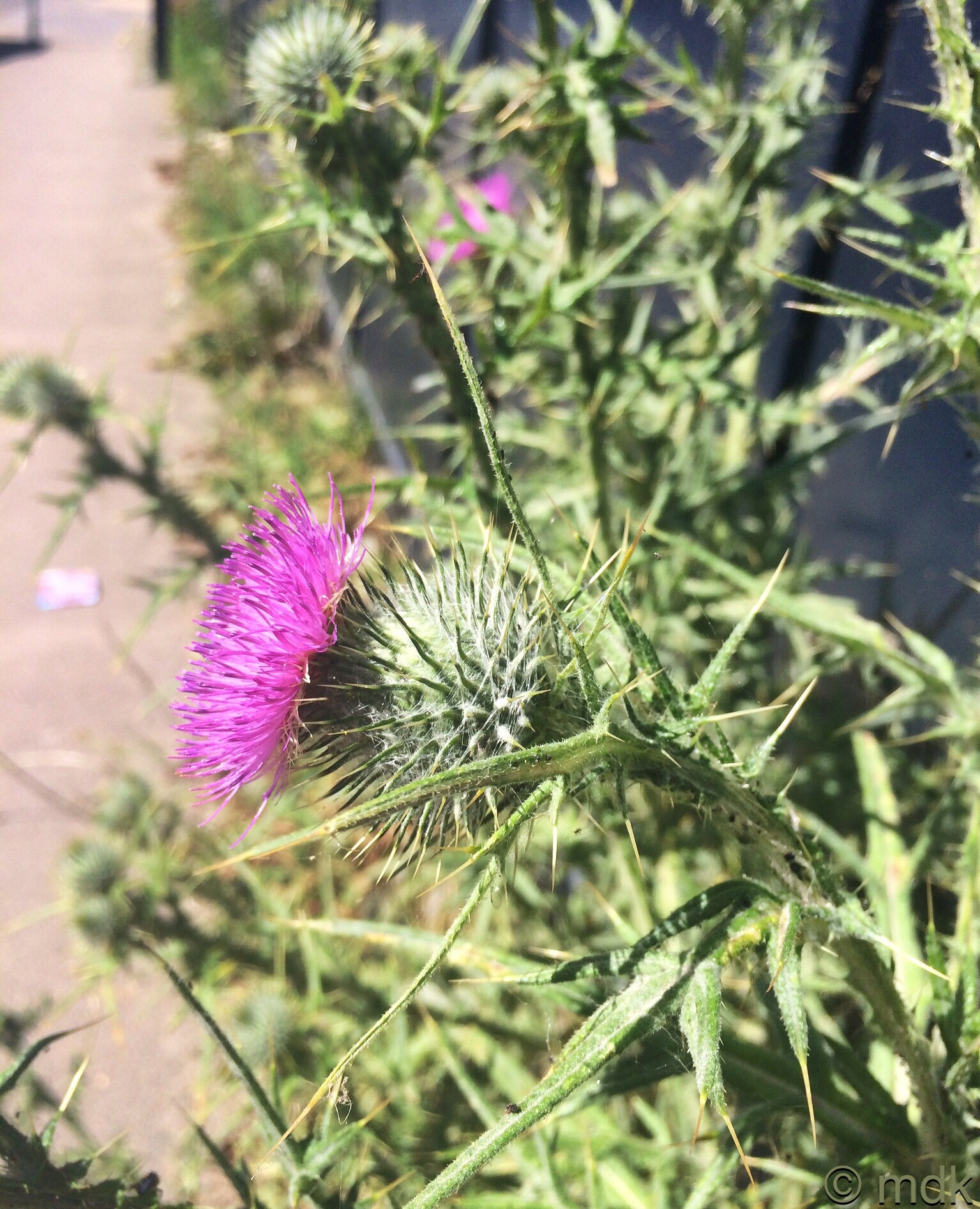 The masts were clanging when I reached the Southampton Sailing Club at the beginning of the shore and the cool salty breeze blowing from the water immediately made me feel better. The smell of the sea and the sound of waves breaking on the shingle was soothing. The sky was clear and blue, not a single cloud and I was glad I’d chosen this route, it was the perfect place to walk on such a warm day. It was also the perfect day for the skateboarding kite surfers (apparently they’re actually called kiteboarders or land boarders) and I was disappointed there weren’t any. When I came to the first wave bench I though about another water stop but decided to carry on for a while. 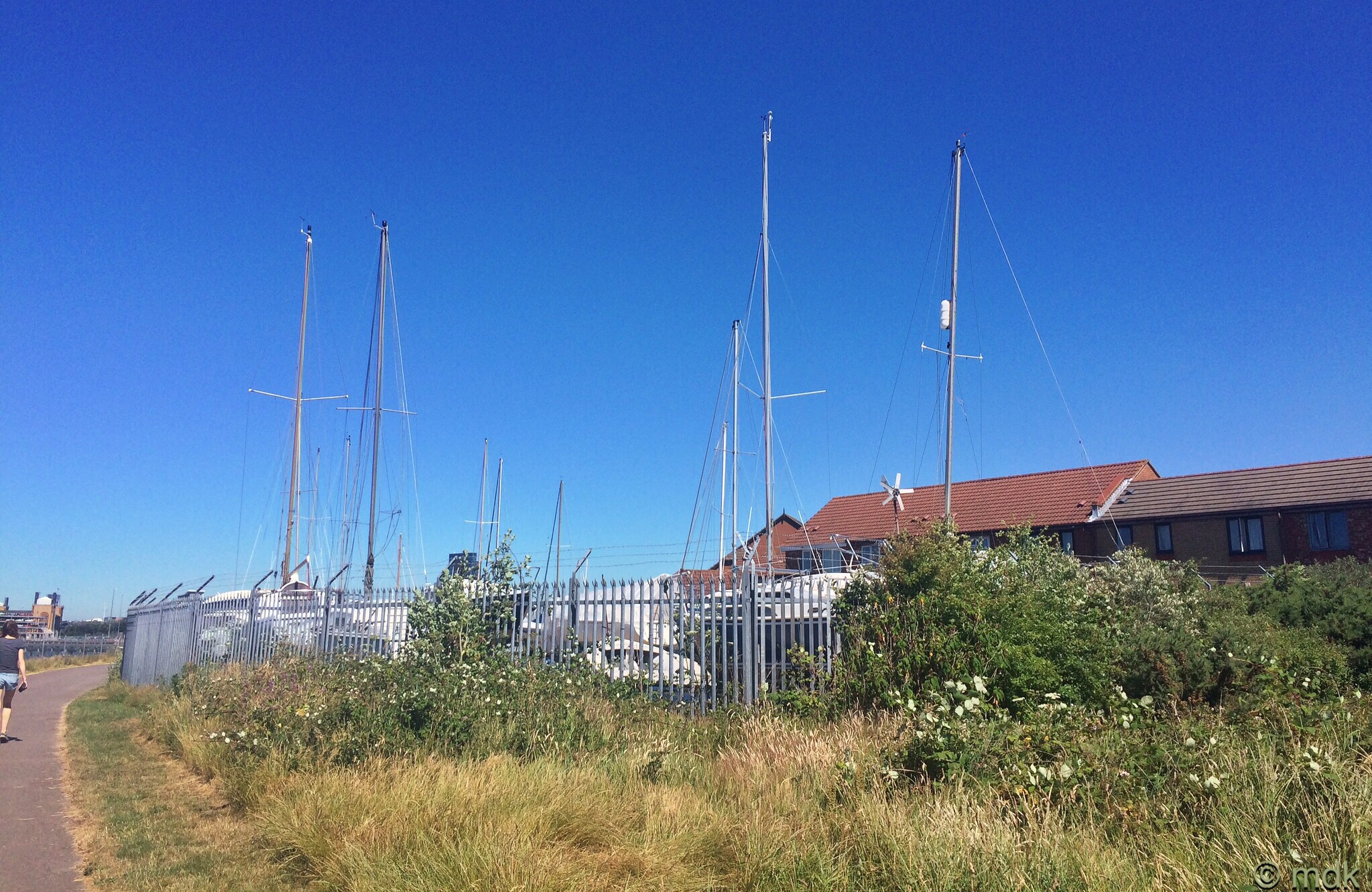 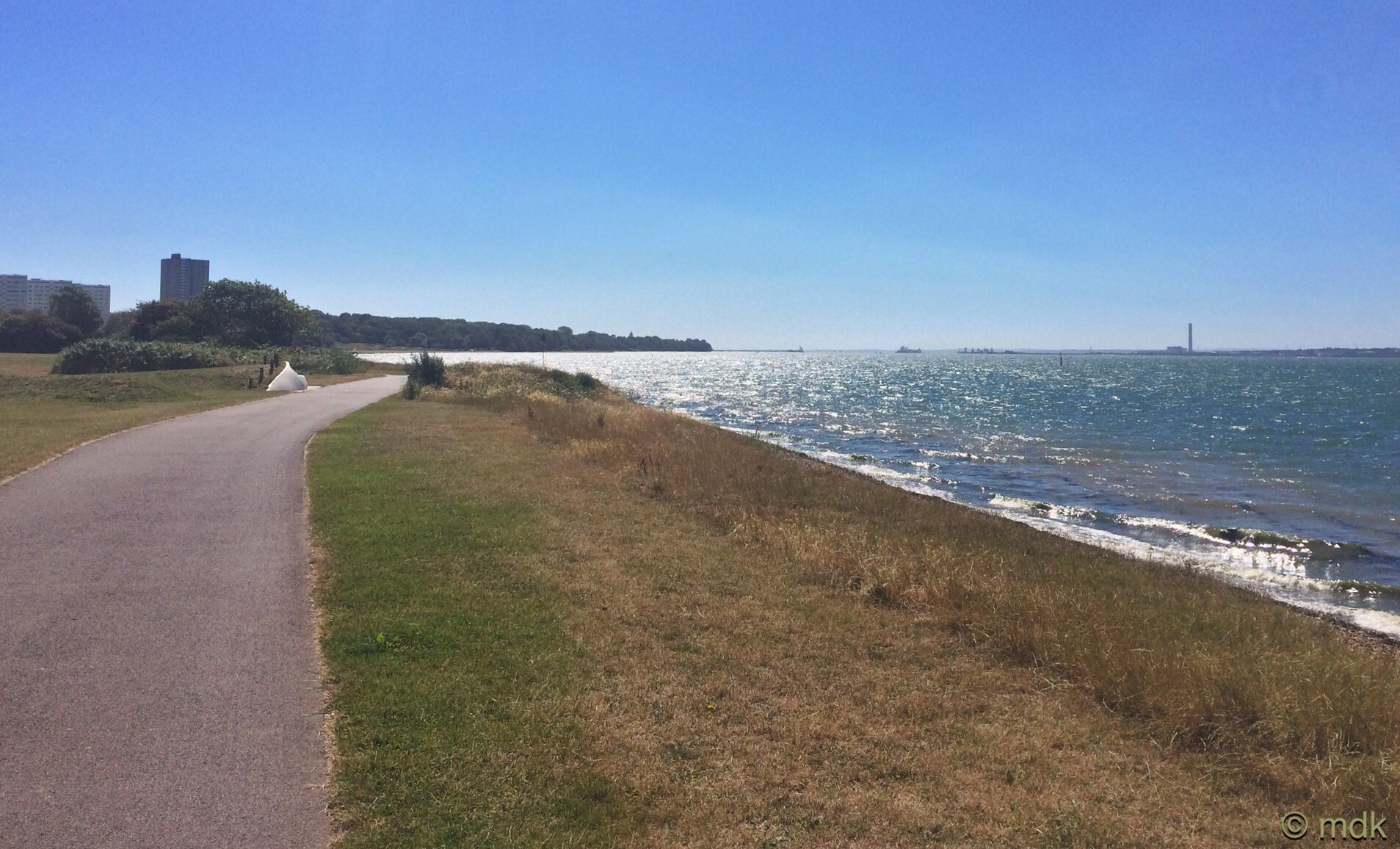 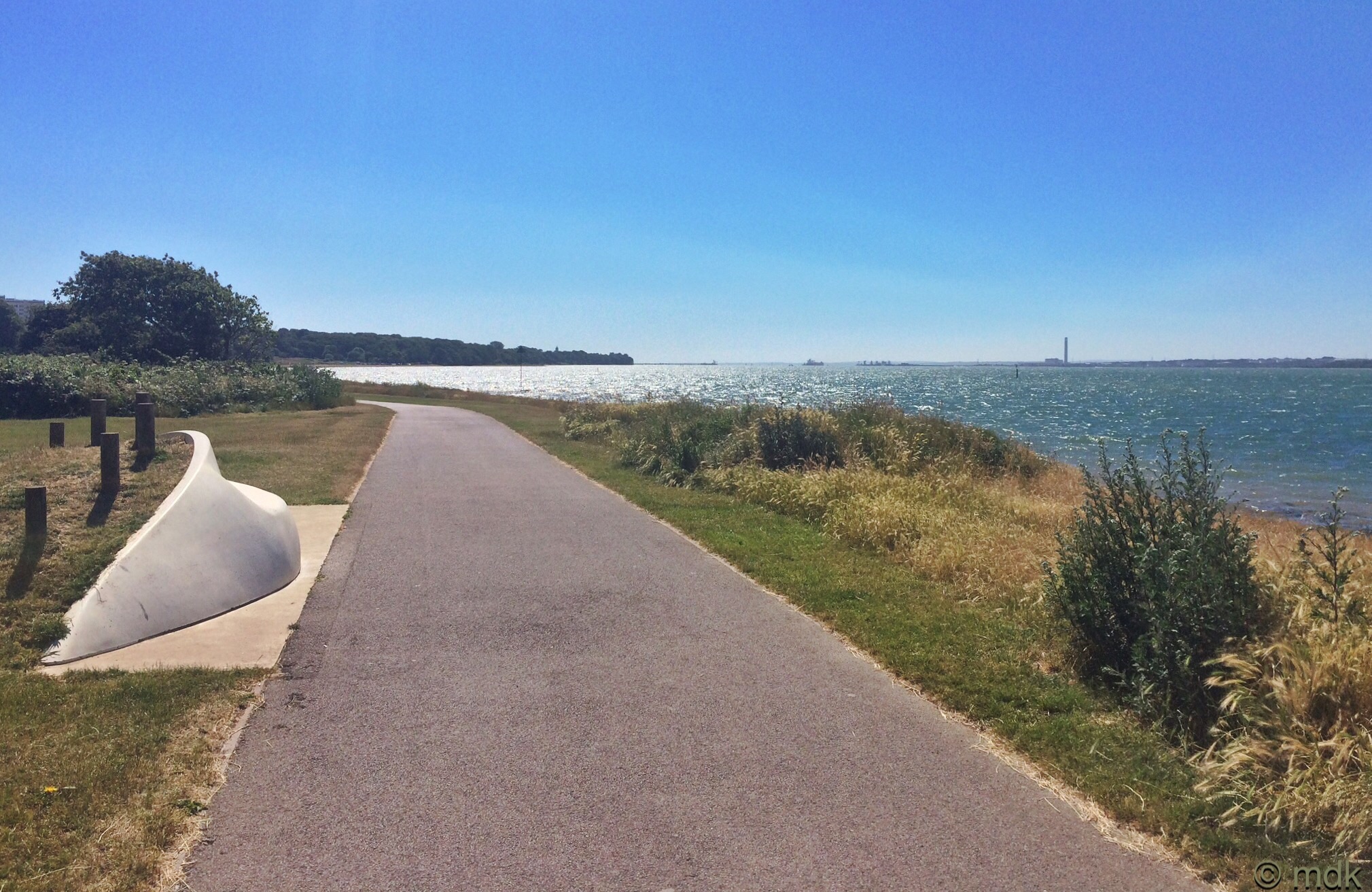 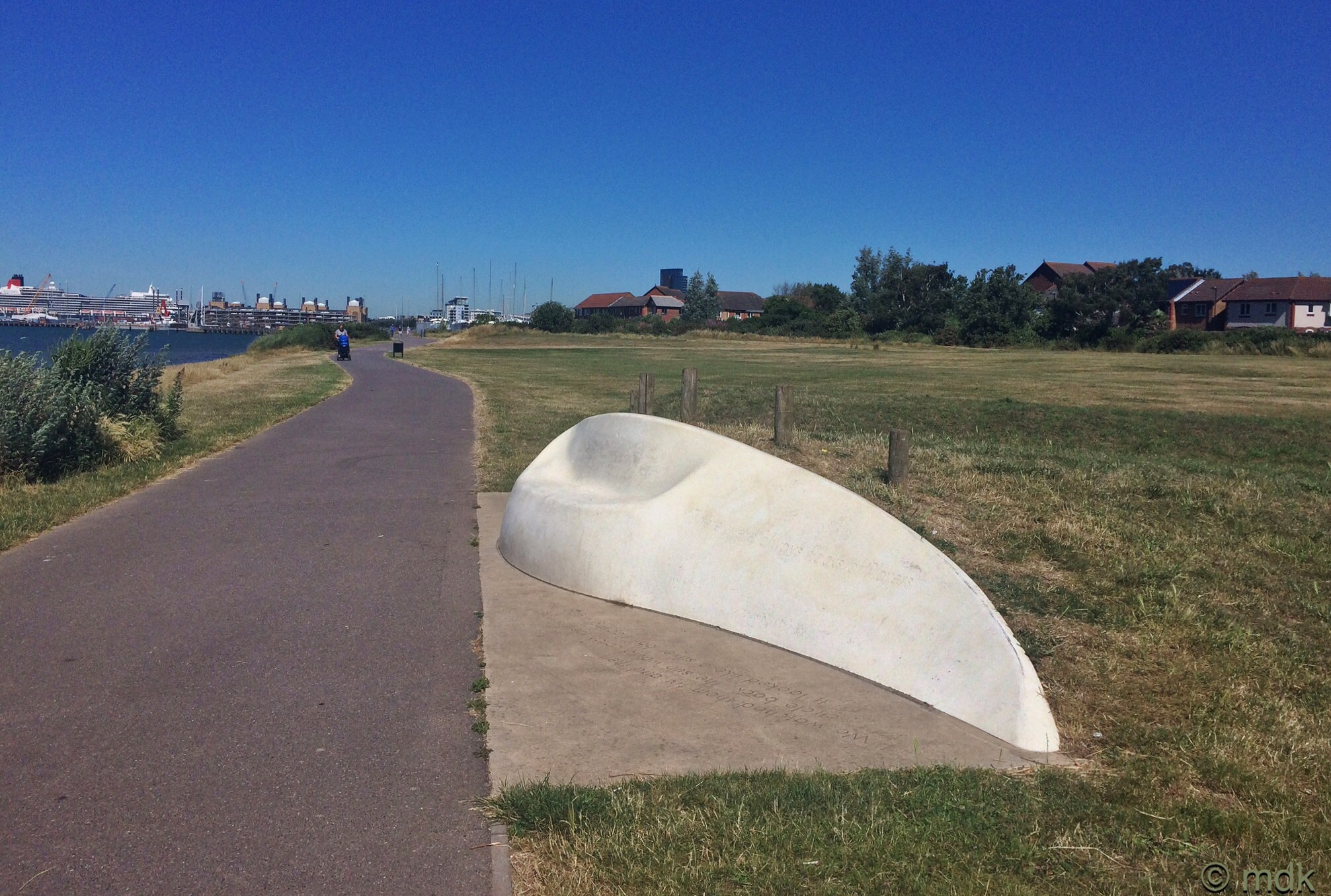 The new cafe by the pitch and putt was open and, for a moment, I thought about going in but I still had a long way to walk so I decided against. Maybe I’d get a coffee in Hamble. The foreshore was full of swaying grasses and wildflowers but it was too windy to stop for photos so I kept going. In the far distance I could see West Wood and the turn that would take me to Netley. It seemed a long way off. 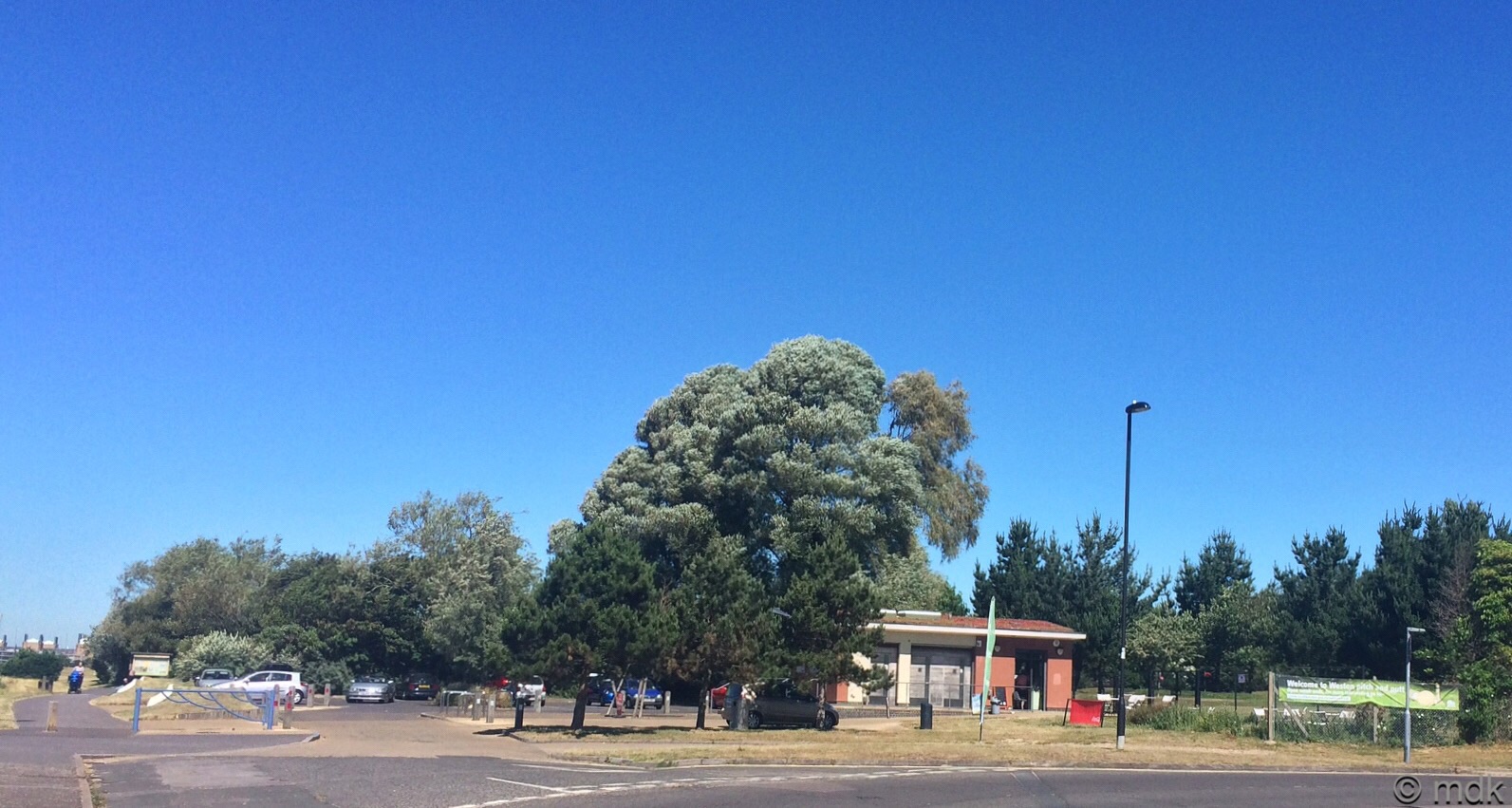 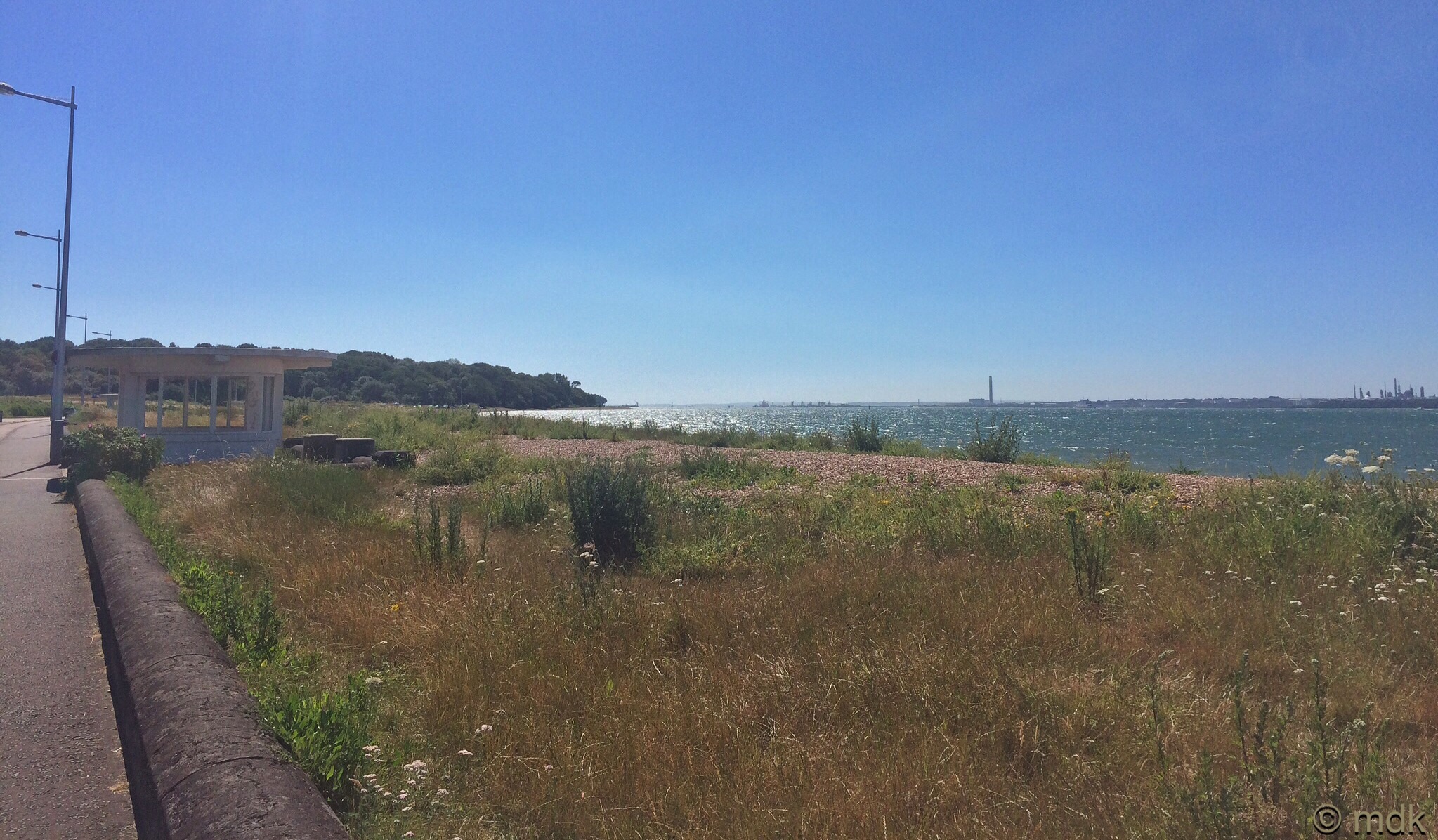 On I went, past the beach shelters and the playground with the sunken wreck to the end of the promenade. When I came to the first bench on the shore path behind Abbey Hill I stopped for my next break. This time I had water and the first of my milkshakes. While I sat looking out past the dead tree, the breaking waves and the spires and towers of Fawley power station a handful of walkers wished me good morning as they headed for the shore. 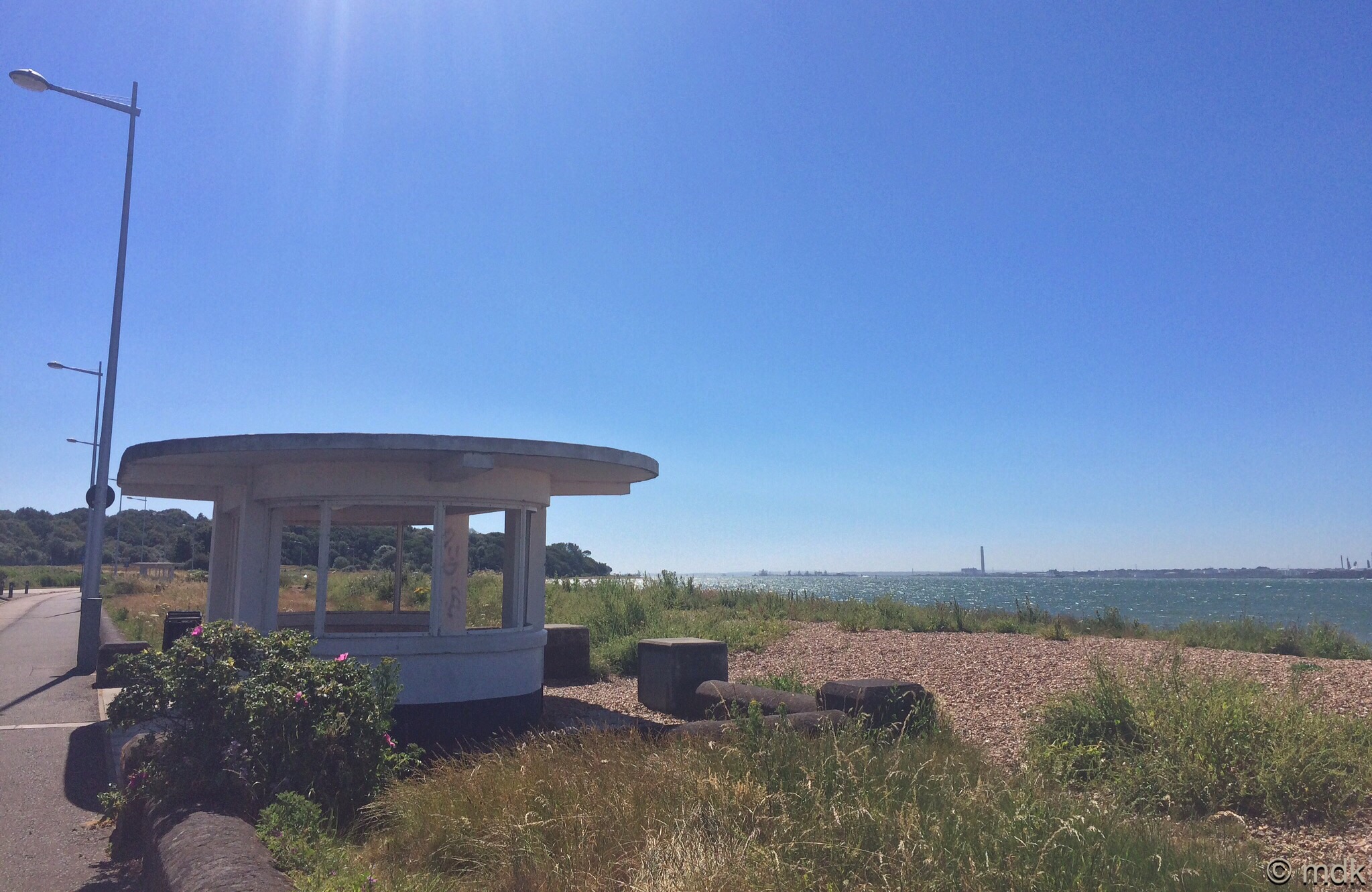 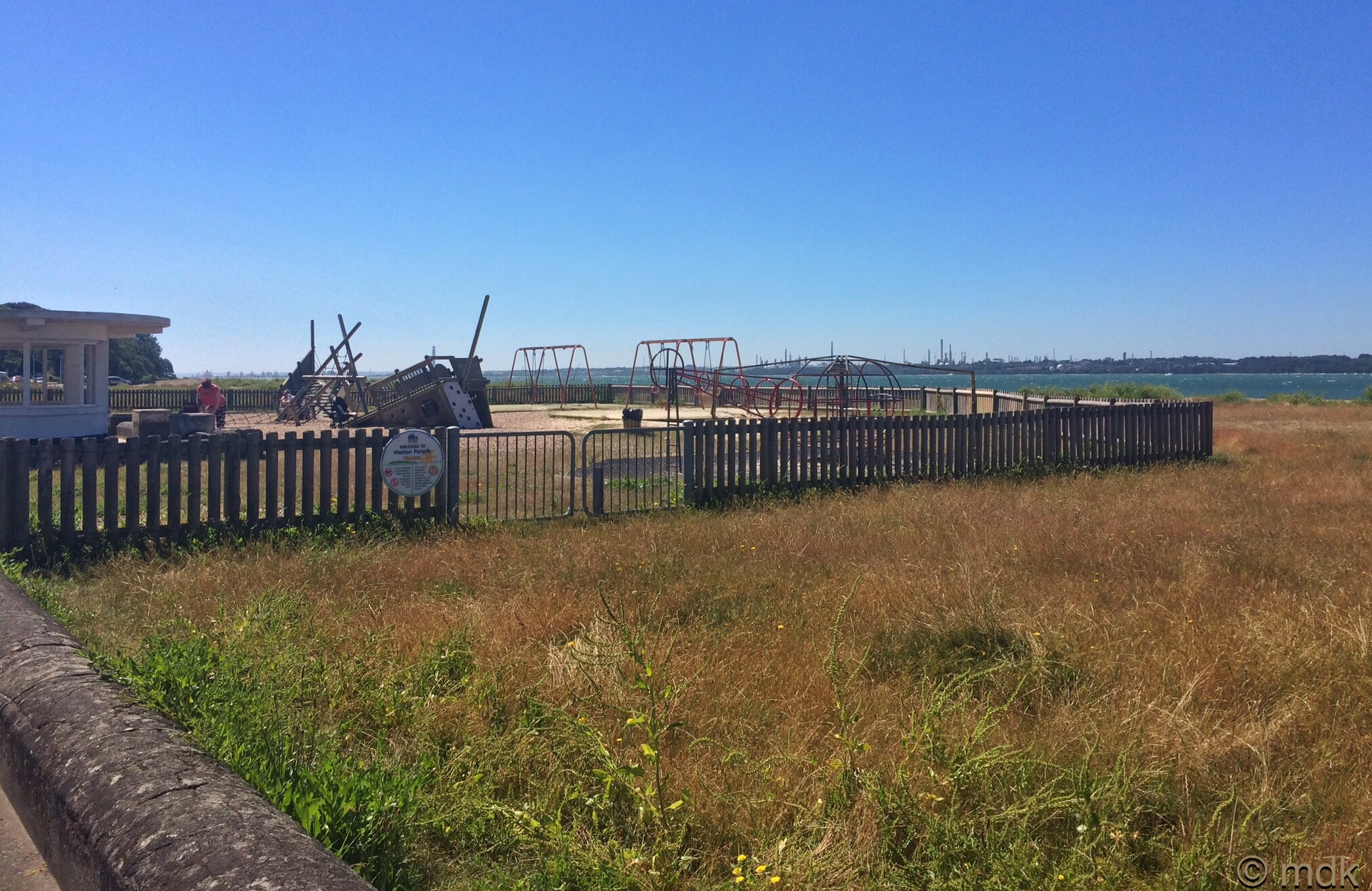 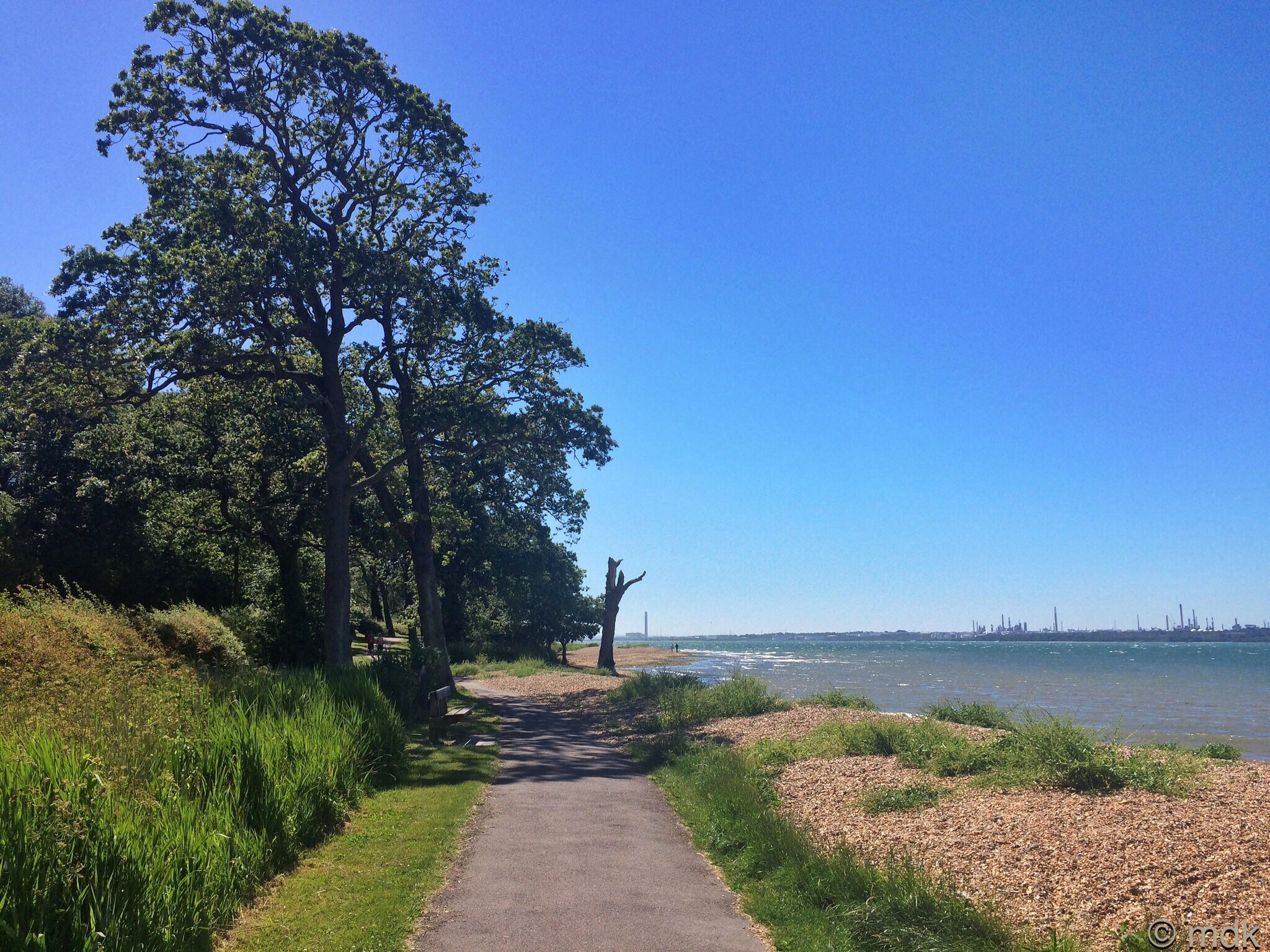 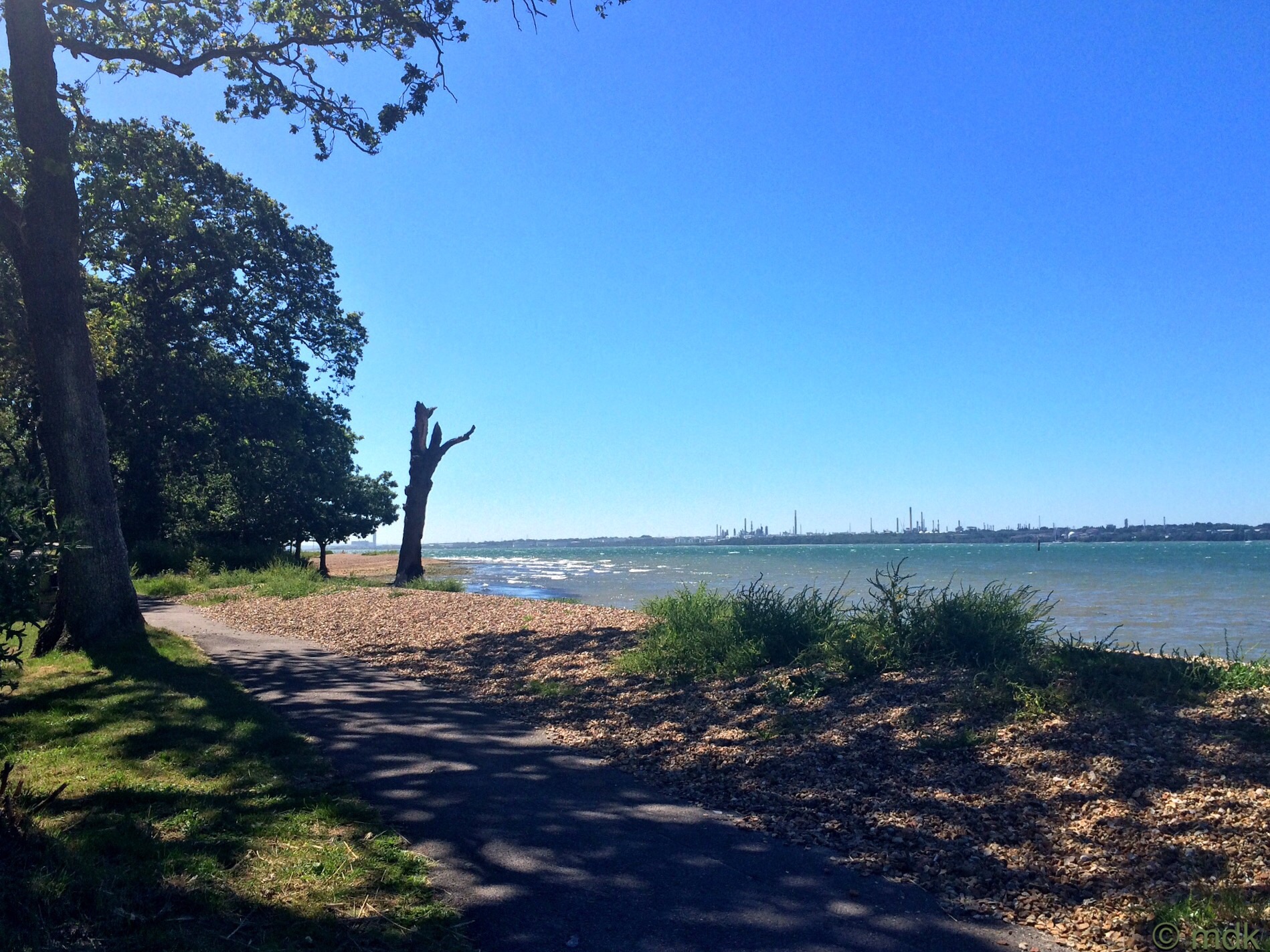 When I set off again I took a little detour over the shingle for a closer look at the tree. It looks as if someone has tried to set fire to it, thankfully unsuccessfully. The loose shingle was hard going and I knew I had to go back to the path to cross the stream. There were teasles growing by the bridge and I stopped to take a photo. They’re so pretty when they flower I’m tempted to grow some in the garden. 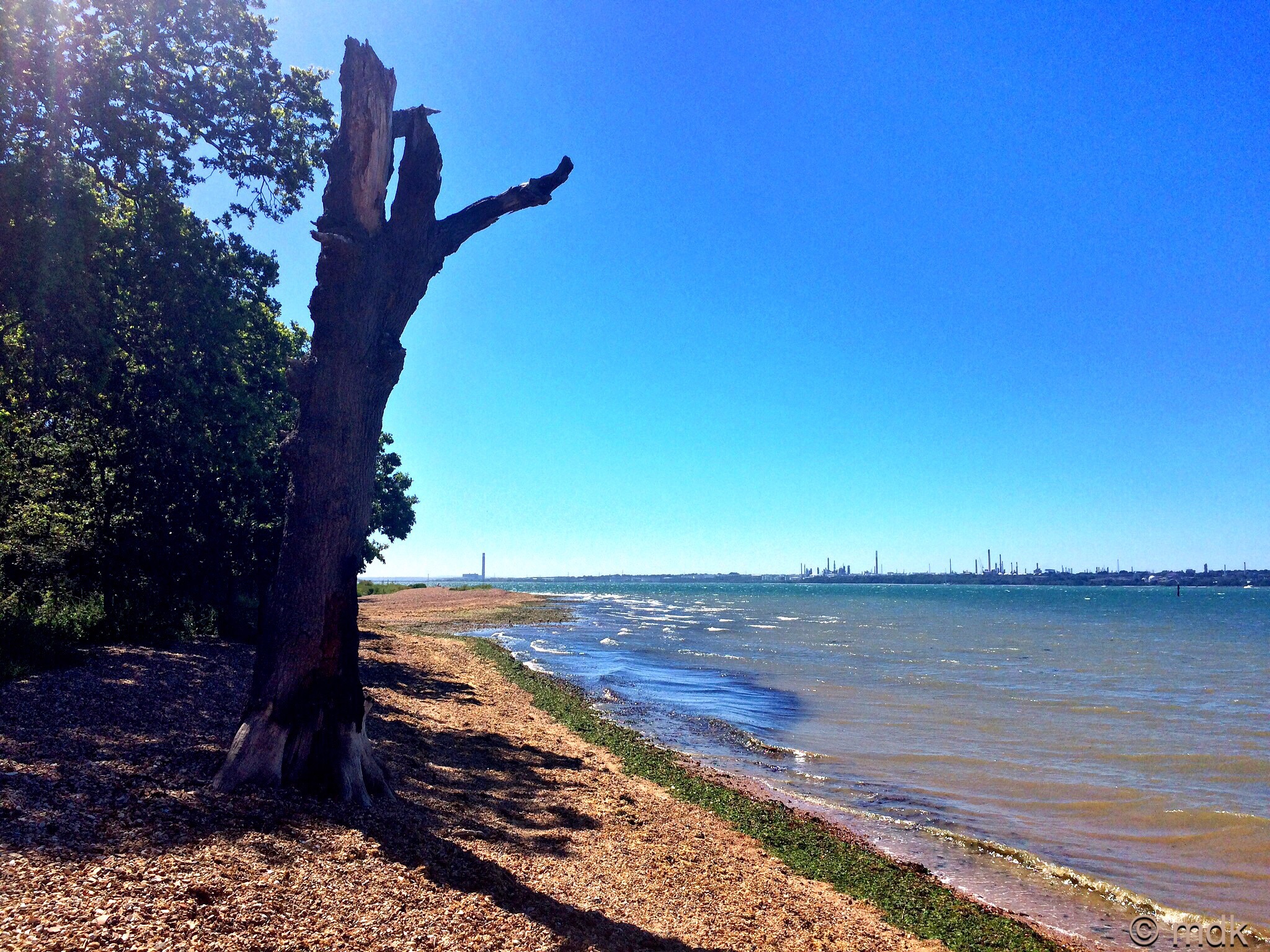 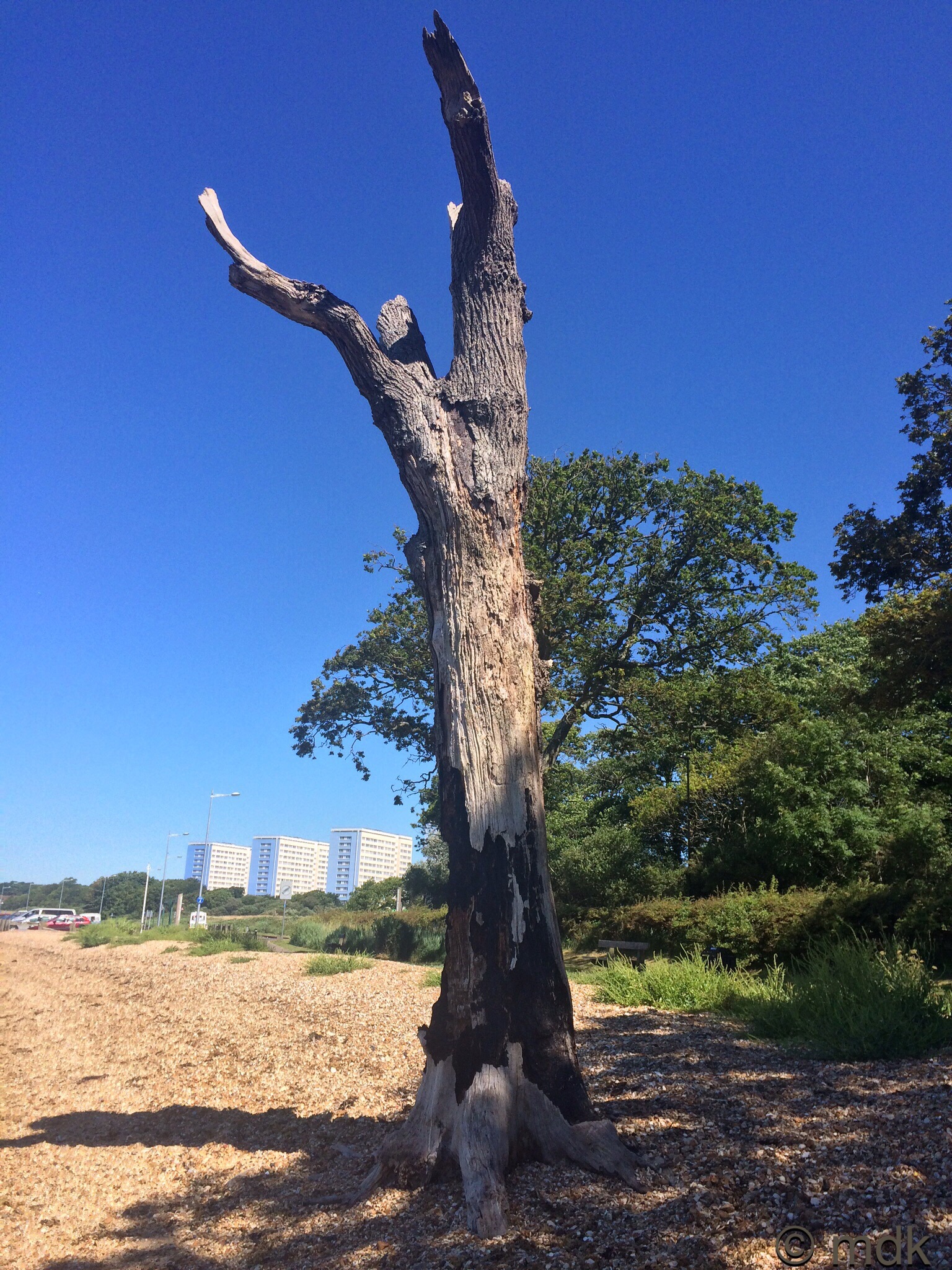 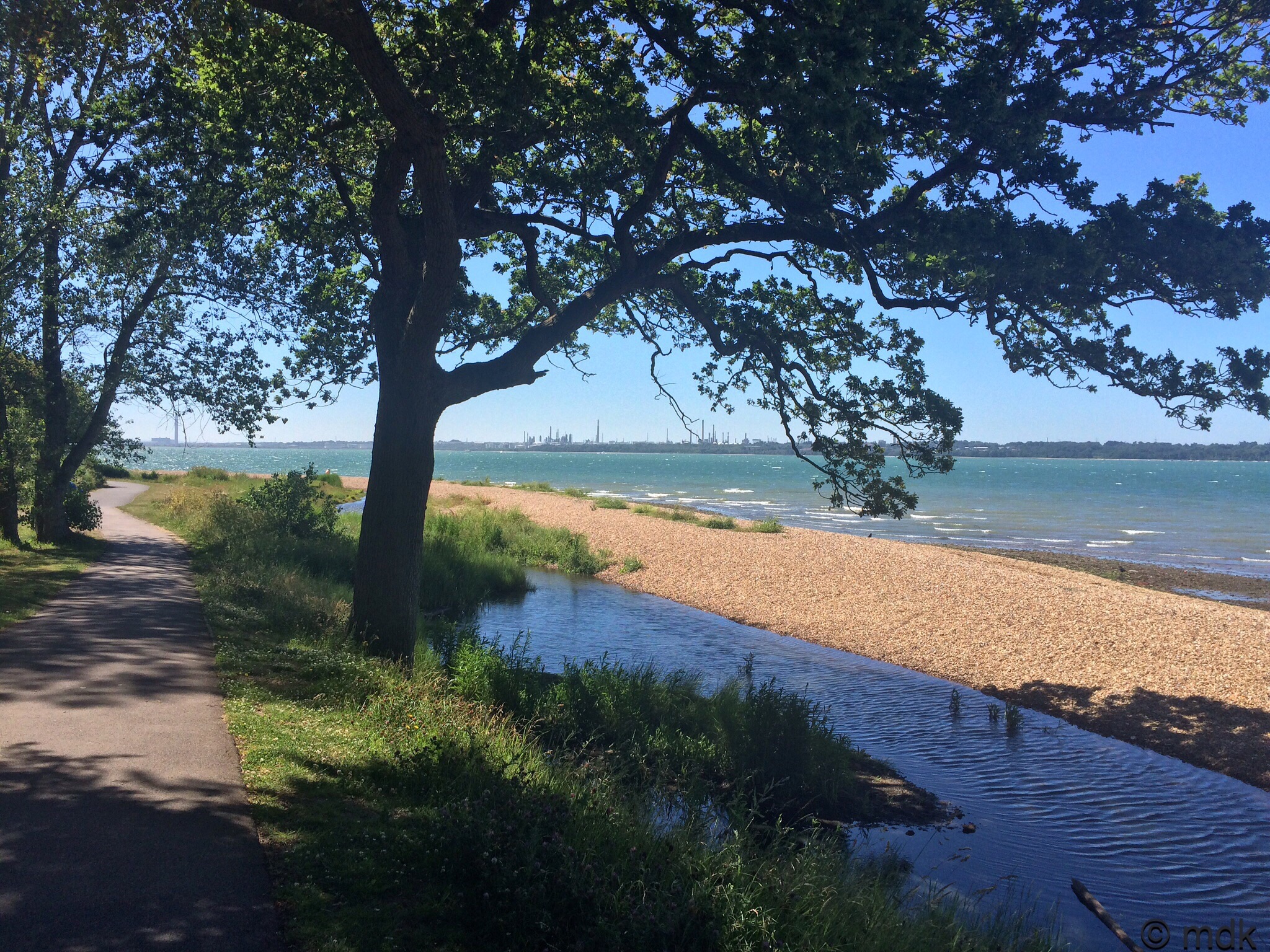 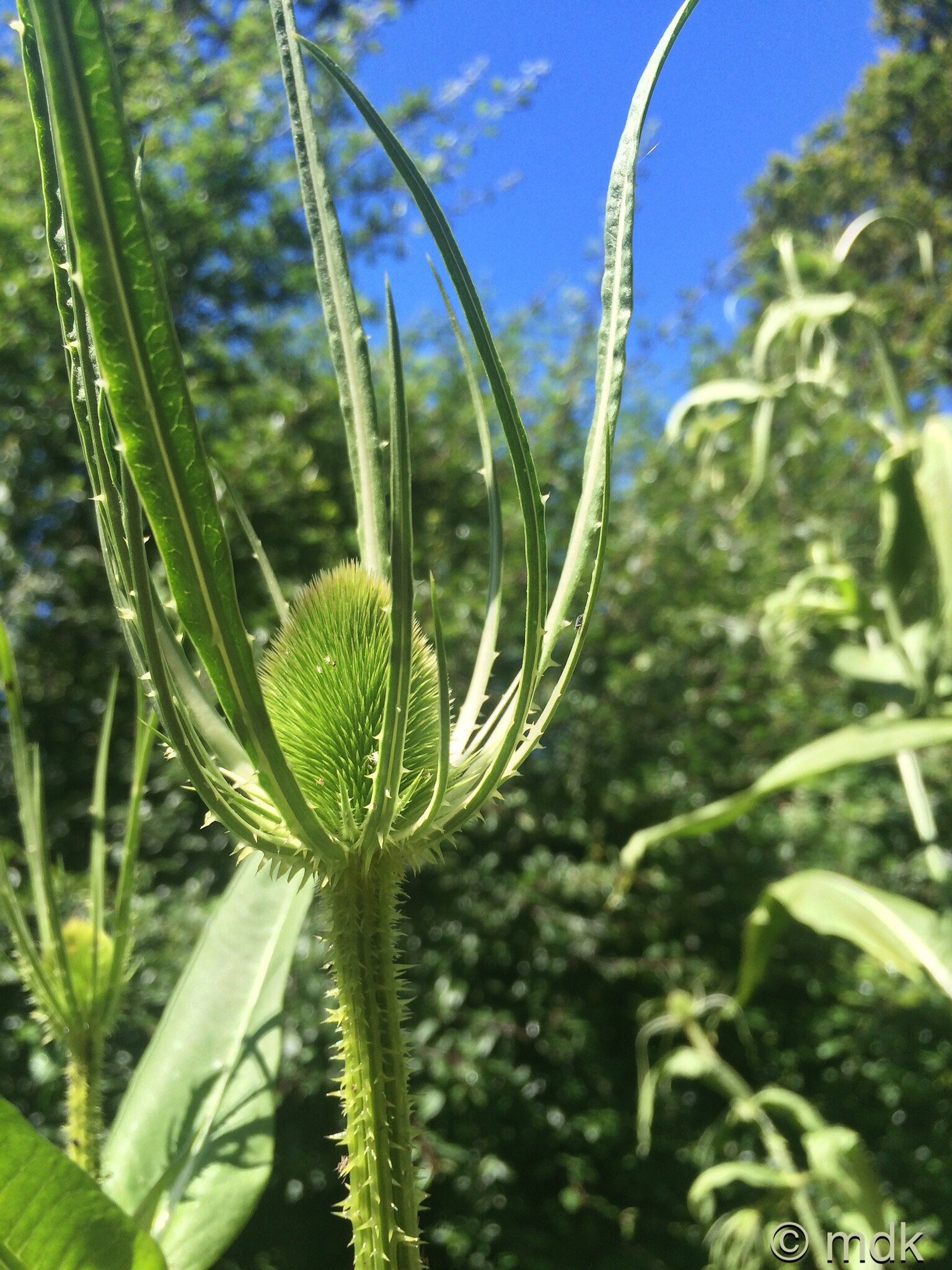 Soon I’d reached the Weston Sailing Club. The bench behind the cannon looked tempting but it hadn’t been long since my chocolate milk break so I passed it by and carried on along the shingle path behind the sea wall. Sadly the wall hasn’t been repaired and I couldn’t help wondering what will happen in winter when the sea gets rough and the tides are high? The next corner I had to turn was just up ahead, it would take me to Netley. 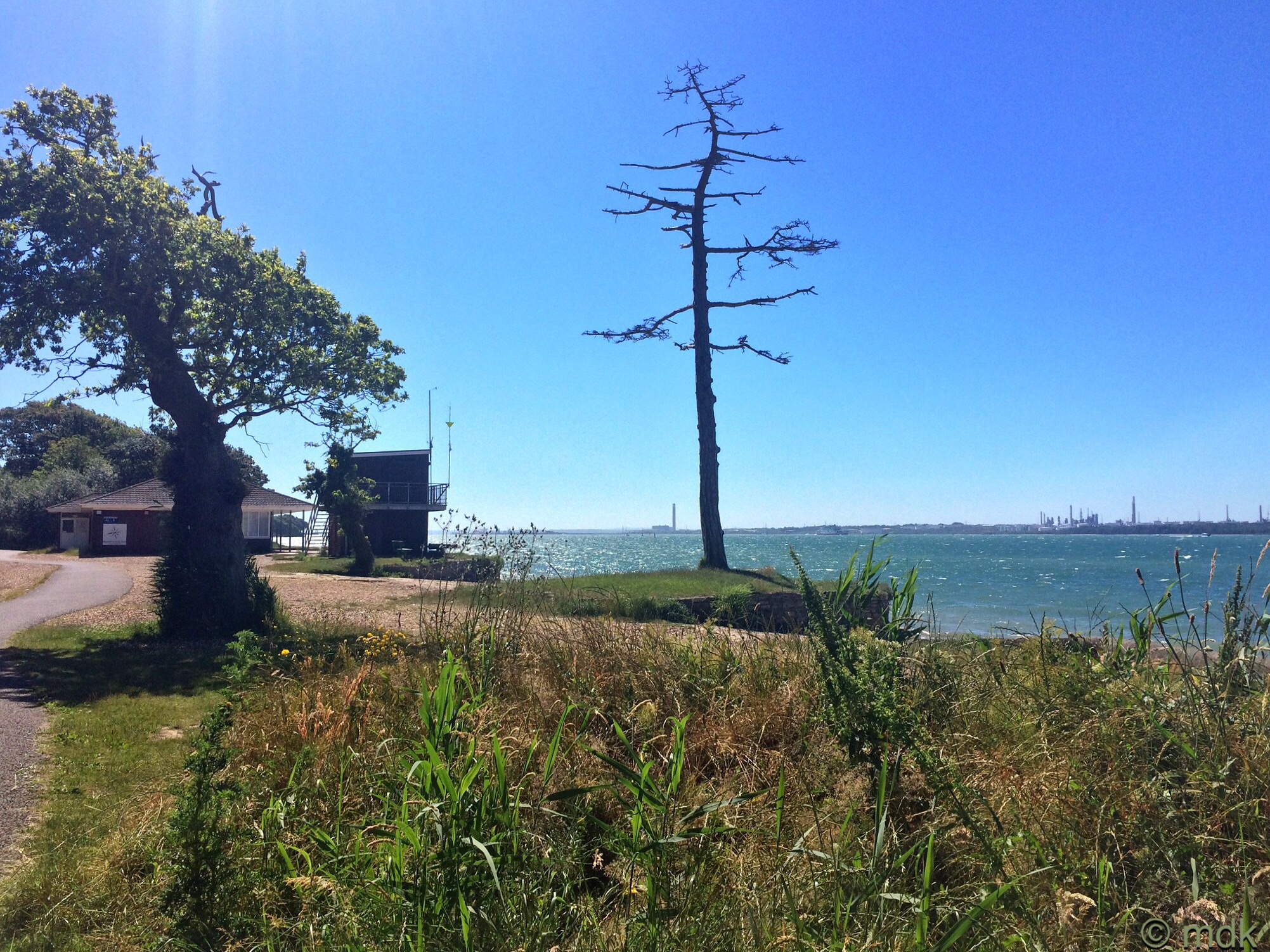 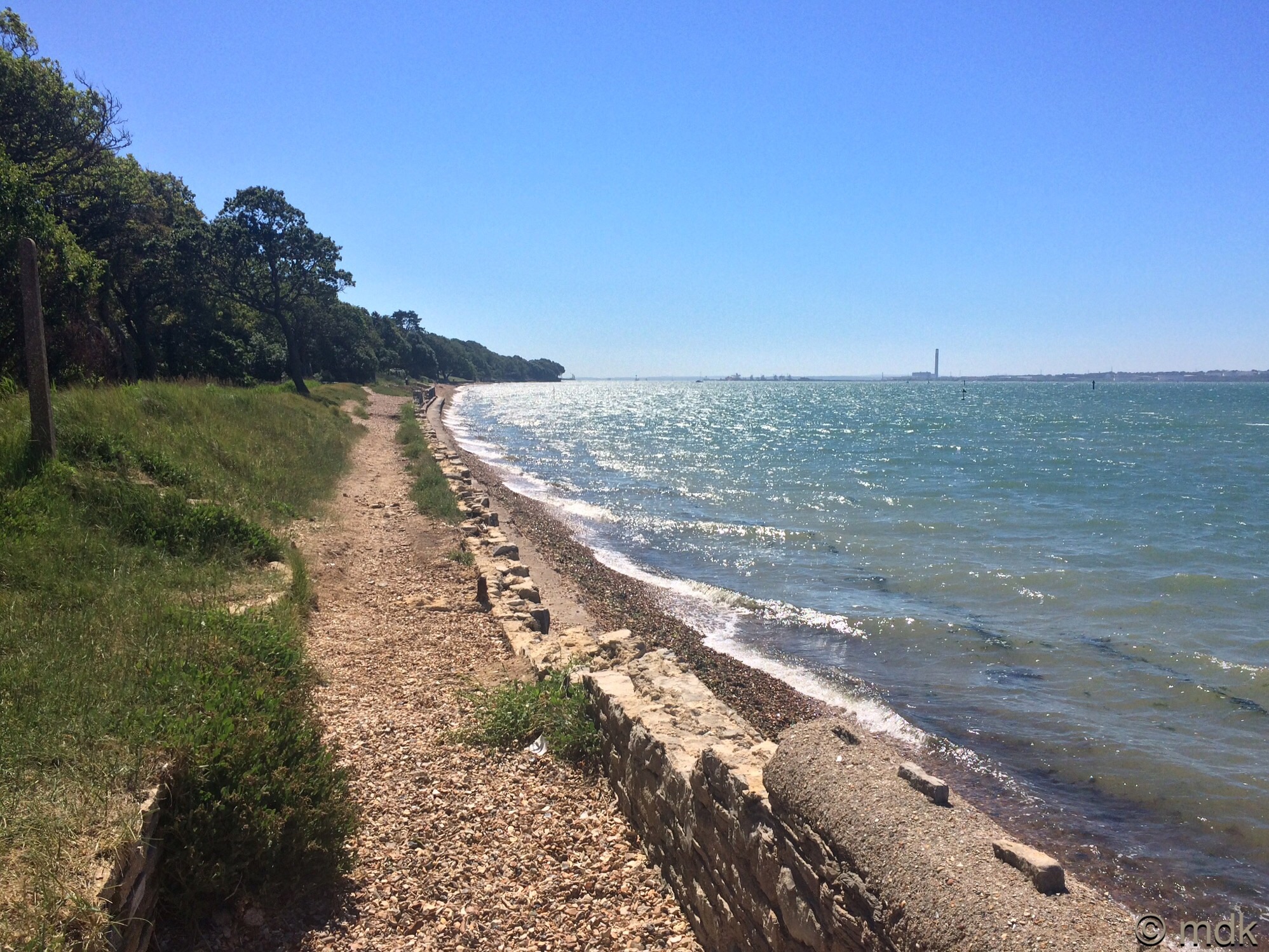 The path beside the Netley Cricket Field is still crumbling too. It’s been blocked off and there are warning signs. Luckily there’s another path running through the trees behind it so there was no need to walk across the shingle. As I made my way along what’s left of the shore path, feeling a little worried about its safety given the collapse of such a large section, I suddenly spotted a beacon on the cricket field, just like the one I saw in West End. There seems to be a phenomenon where, once you see something like this, you suddenly start seeing them everywhere and I can’t help wondering how many more I’ve missed. A little Googling told me it’s been there since at least 2012 when it was lit to celebrate the Queen’s Golden Jubilee. It was lit in April to celebrate the seventieth anniversary of VE Day too. Funny how I’ve never noticed it before. 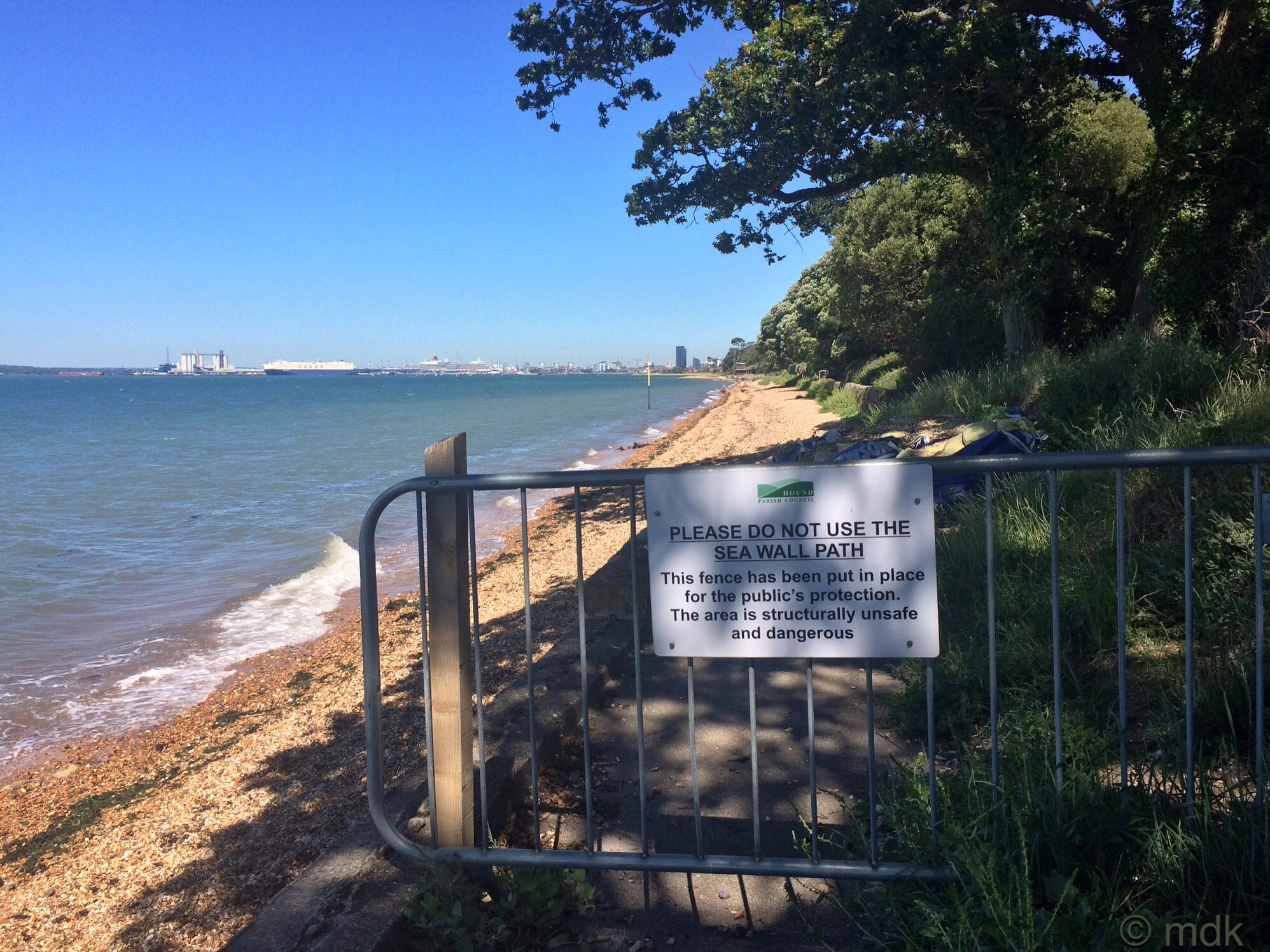 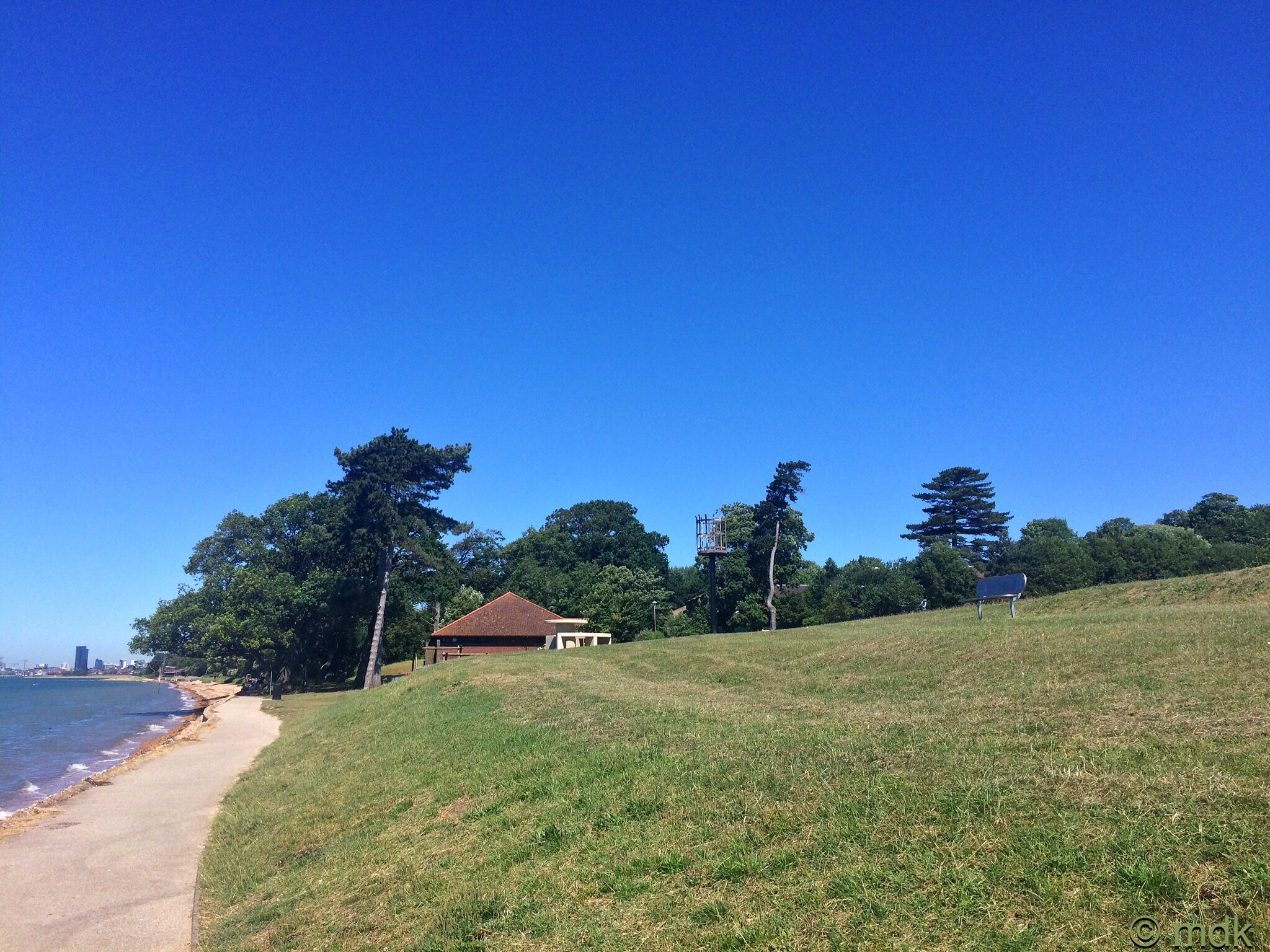 The tide was quite high so I knew I wouldn’t be able to walk along the shore past the crumbling Netley cliffs to Victoria Country park so I turned up Beach Road to Netely Village and the row of  colourful cottages. Away from the sea I was hit by the full force of the heat again. Maybe I’d stop for coffee at the cafe in Victoria Country Park?