So there I was in Universal Boatyard surrounded by boats on dry land and lots of shipwrights looking askance at me. Uncomfortable didn’t even begin to describe it. According to my pre-walk reading I was supposed to go to the right of the boatyard but there didn’t seem to be a path to the right. I walked this way and that, trying not to look too lost or too suspicious but all I could see were dead ends and boats.

Of course I could have asked one of the shipwrights but they looked a little scary so I didn’t dare. In the end I turned to the WalkJogRun satellite maps. They weren’t exactly helpful but I did manage to find my way out of the boatyard and onto the road eventually. WalkJogRun told me I needed to bear left to get back onto the path but the only way I could see had a big sign saying ‘private drive, no public footpath or right of way.’ A little way up the road another sign said ‘private’ too. Worryingly I was getting further and further from the river.

In the end I turned back towards the boatyard rather sheepishly. Then I spotted another walker going down the first path ignoring the sign. Maybe it was one of those signs people put up to stop people using public footpaths. It wasn’t long before I relised it really was a private drive and the walker was as lost as me. We were basically in someone’s garden. Even so I carried on because I could see the path on the other side of the grass and no fence to stop me getting onto it, although I did have to squeeze round the side of a gate. Obviously there has to be another way through and I’m glad the homeowners didn’t catch me trespassing.

Just after I got back onto the path a cyclist stopped and asked me if I was lost. I must have been looking a little worried at this point.
“I was,” I admitted, “but I’m not now.”
The cyclist seemed to know where she was going and she certainly wasn’t heading behind the boatyard. Obviously the instructions I’d read were wrong, or the person writing them didn’t know their right from their left.

Behind me the clouds seemed to be gathering and I began to get a little worried about the weather so I upped my pace a little. Still, the path had real solid land on one side now with pretty little houses. One thatched cottage got my house envy stirred up again. The yachts I could see now were moored in Swanwick Marina, my journey into the unknown was almost over. 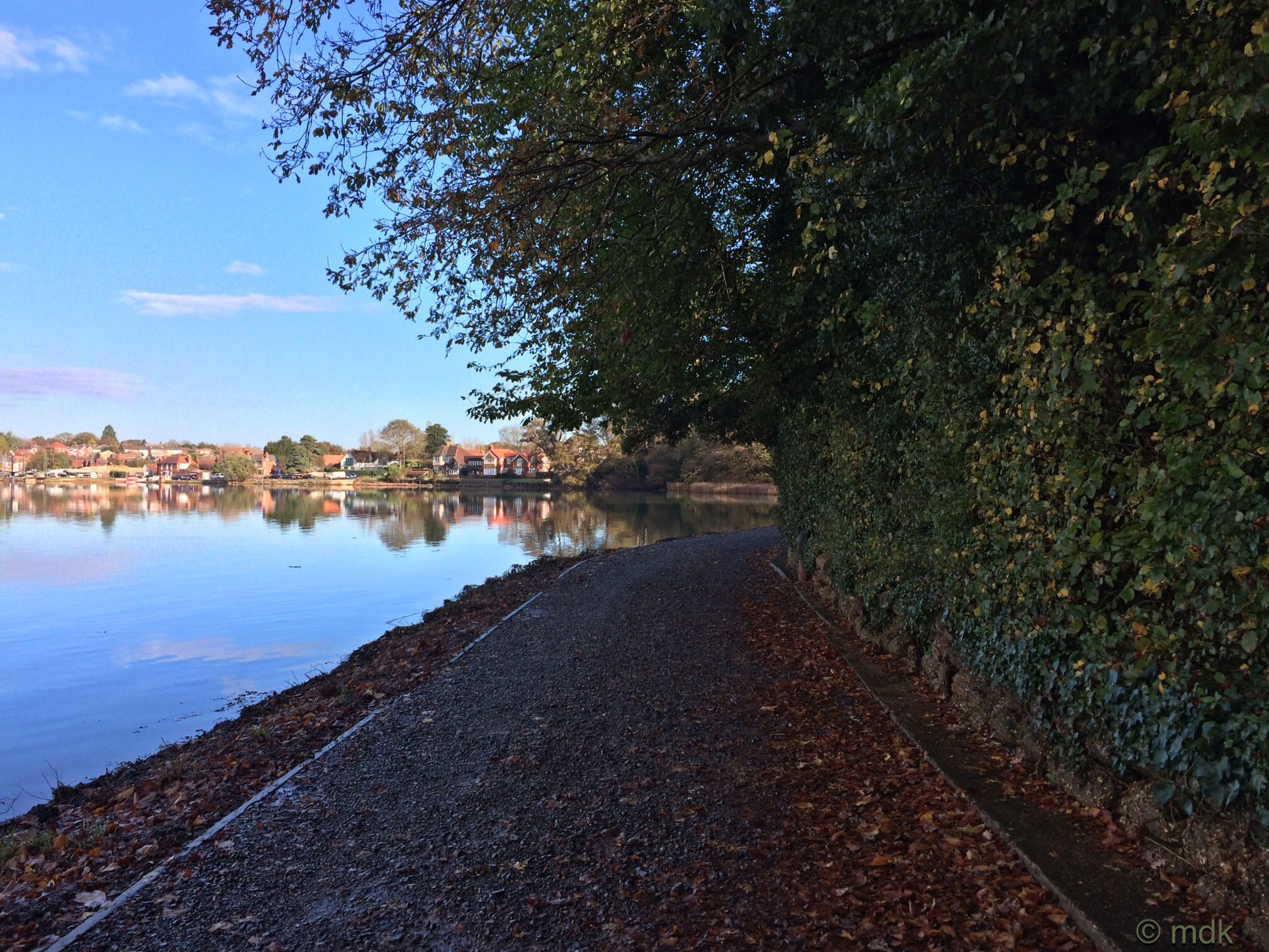 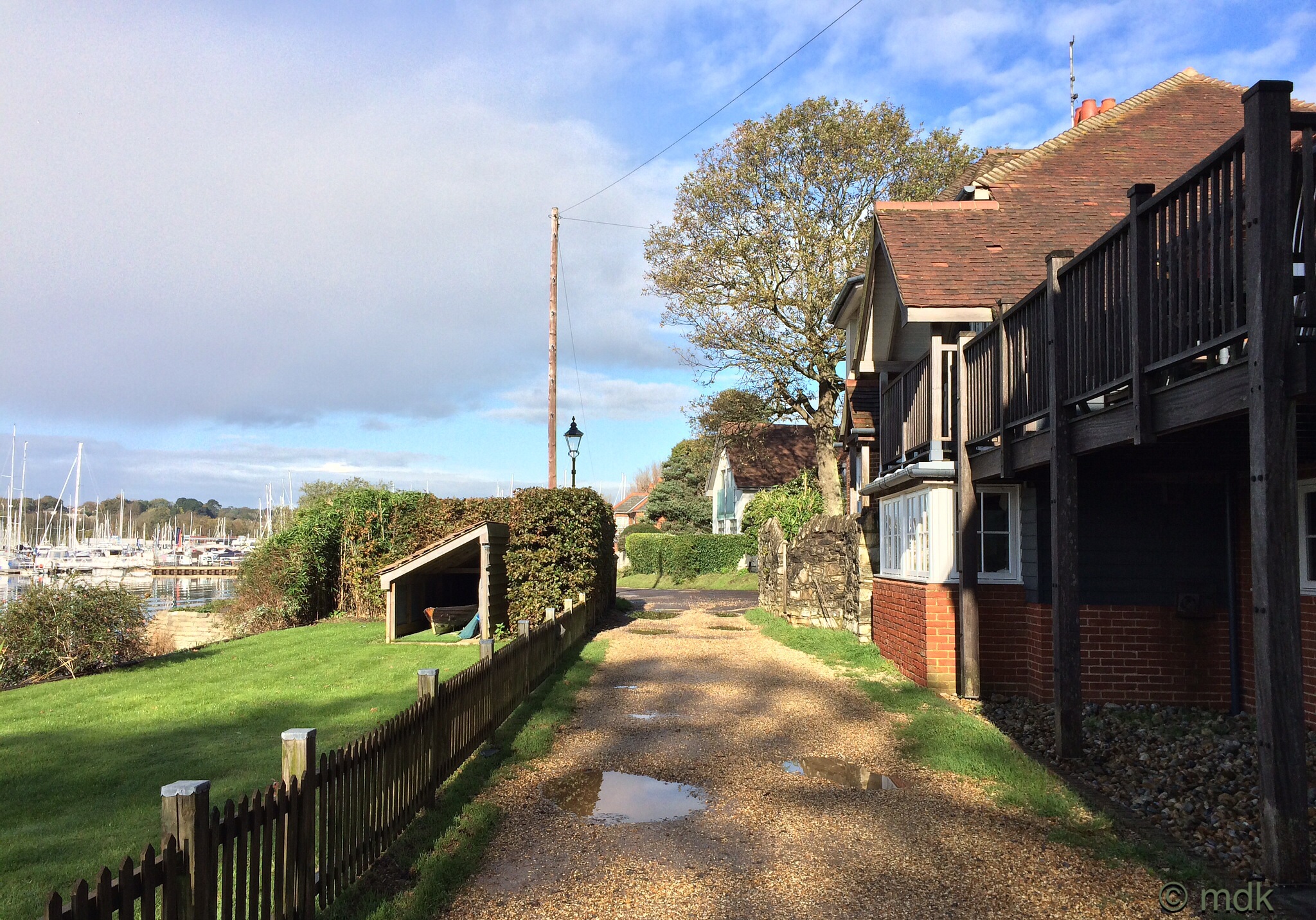 There was a little bench at the waters edge and, despite my weather worries I stopped for a while to eat my Bounty bar and drink my water. It hadn’t been a long walk but the very rough gravel path and the brisk wind had taken a toll on my energy levels. A boost was needed before the last leg of my journey.

Not long after I set off again I passed Moody’s Boatyard. This family business has existed for almost three hundred years, with seven generations of the family working there. They began in 1827 maintaining fishing boats, then coal barges. Before long they were building small dinghies and then, in 1935, yachts. Not long after I’d passed the gate I was on the main road feeling rather disoriented after my quiet walk along the causeway.

Swanwick is a sleepy little village without any real centre but, if you have flown in the UK since 2002, you owe your safety to it as the National Air Traffic Services Air Traffic Control Centre is based there. It’s actually not too far from The Navigator Pub right where I came out onto the road. Given my Universal Boatyard debacle the pub’s name seemed ironic and made me chuckle. No one could ever call me a navigator. From here on though it was almost a straight walk home and one I knew very well, albeit from the perspective of a car or motorcycle.

I stopped for a moment on the bridge over the River Hamble and looked out at the ships either moored or laid up in the boatyard. Those dark clouds rolling in got me moving again fairly quickly though. Despite having my mac in my bag I didn’t really want to get wet as well as cold. 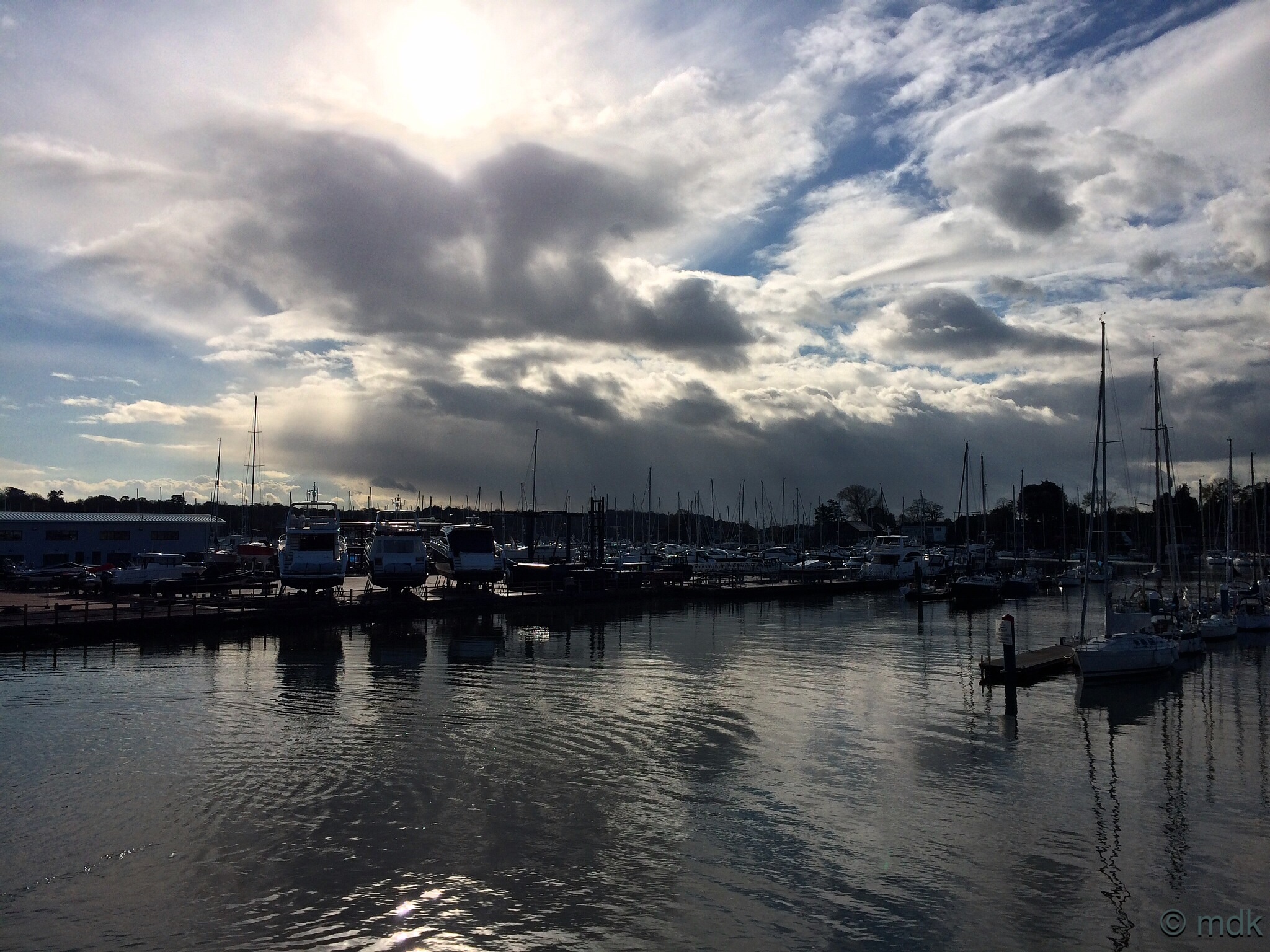 As all my previous visits were by some kind of motor vehicle I didn’t realise what a steep hill I had to climb until I was actually climbing it. With the sun gone and cars whizzing past it wasn’t at all enjoyable. It did go downhill for a while, which was a relief but that was short lived. The next climb was Providence Hill, a long, hard slog which had me undoing my padded jacket and huffing a little. All of a sudden it occurred to me why the Bursledon Windmill is sited at the top, I was climbing from sea level to one of the highest points in the area.

When I actually saw the windmill, just a glimpse through the trees across someone’s garden, I cheered up a little. Even so, I was puzzled that it still seemed to be surrounded by scaffolding as it was supposed to have reopened on Sunday. Of course, I couldn’t resist a little detour to see what was going on. I crossed the road and continued my trudge up the hill keeping my eyes on the trees in case I could see the mill again. This was fruitless but I did spot a curious little wooden shed hidden in a small clearing. Wonder who it belongs to?

Eventually I made it to Windmill Lane and the first thing I noticed was a brand new sign. It was certainly a little more noticeable than the old one. As soon as I saw the windmill over the trees I could tell it wasn’t working. Not only was there still scaffolding and a man high up in it who seemed to be painting, but there were no sails on the windmill struts. 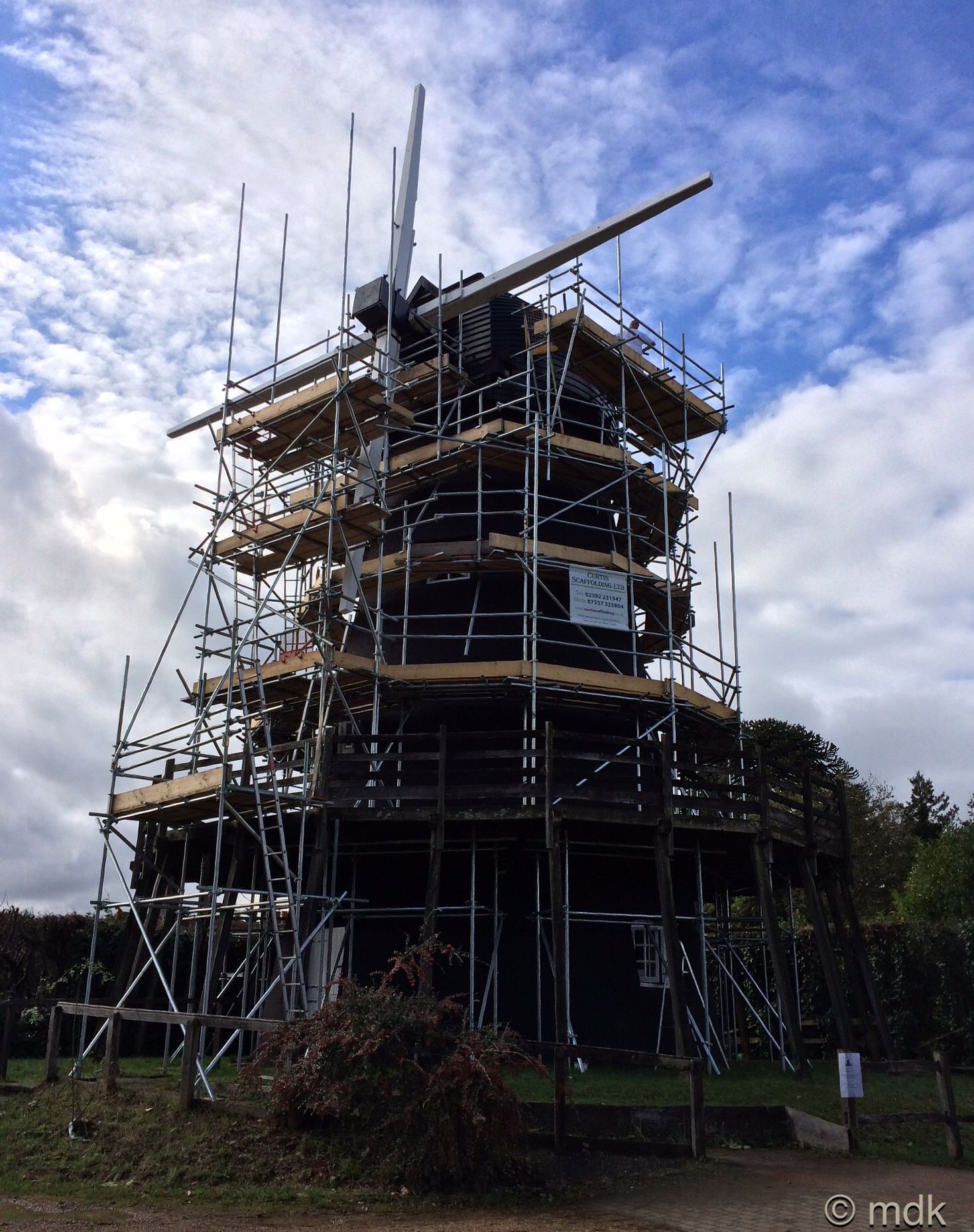 When I looked towards Chineham Barn I spotted one of the sails leaning up against it. It looked like it needed a fair bit of work before it would be ready to go up. At this rate I’m wondering if it will be ready before the Big Birthday Bash at the end of the month.

On the grass between the barn and the granary lay a huge wooden beam. I’m guessing this is the old wind shaft, removed when the new one was put in last week. It was very cracked and rotten looking so I’m not surprised they needed a new one. Maybe they’ll keep it as an exhibit. Some rather spectacular lichen was growing on the wooden bars of the fence around the pond and I stopped for a closer look before making my way back down the lane, feeling just a tad disappointed. Maybe next time the sails will be turning. 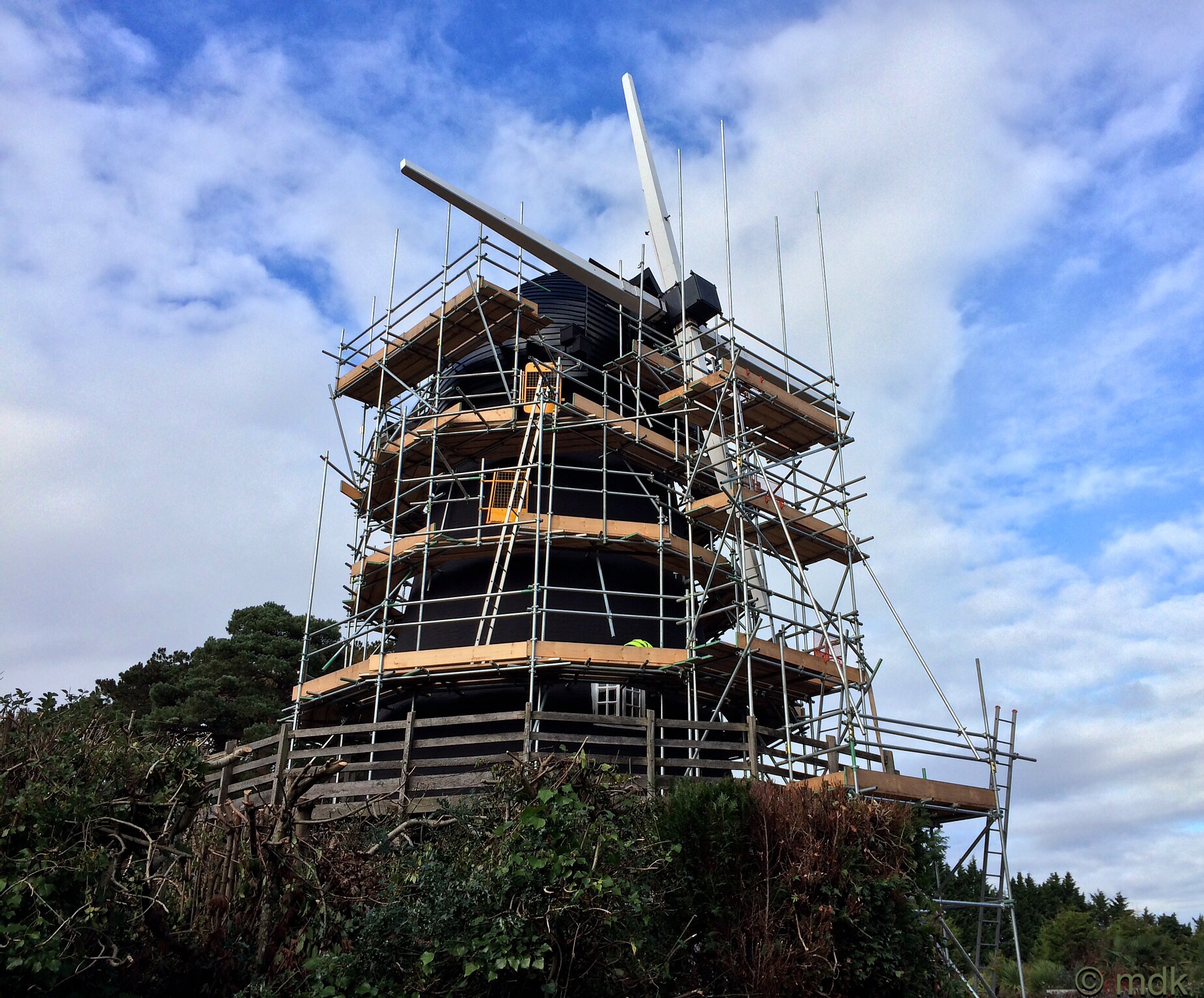 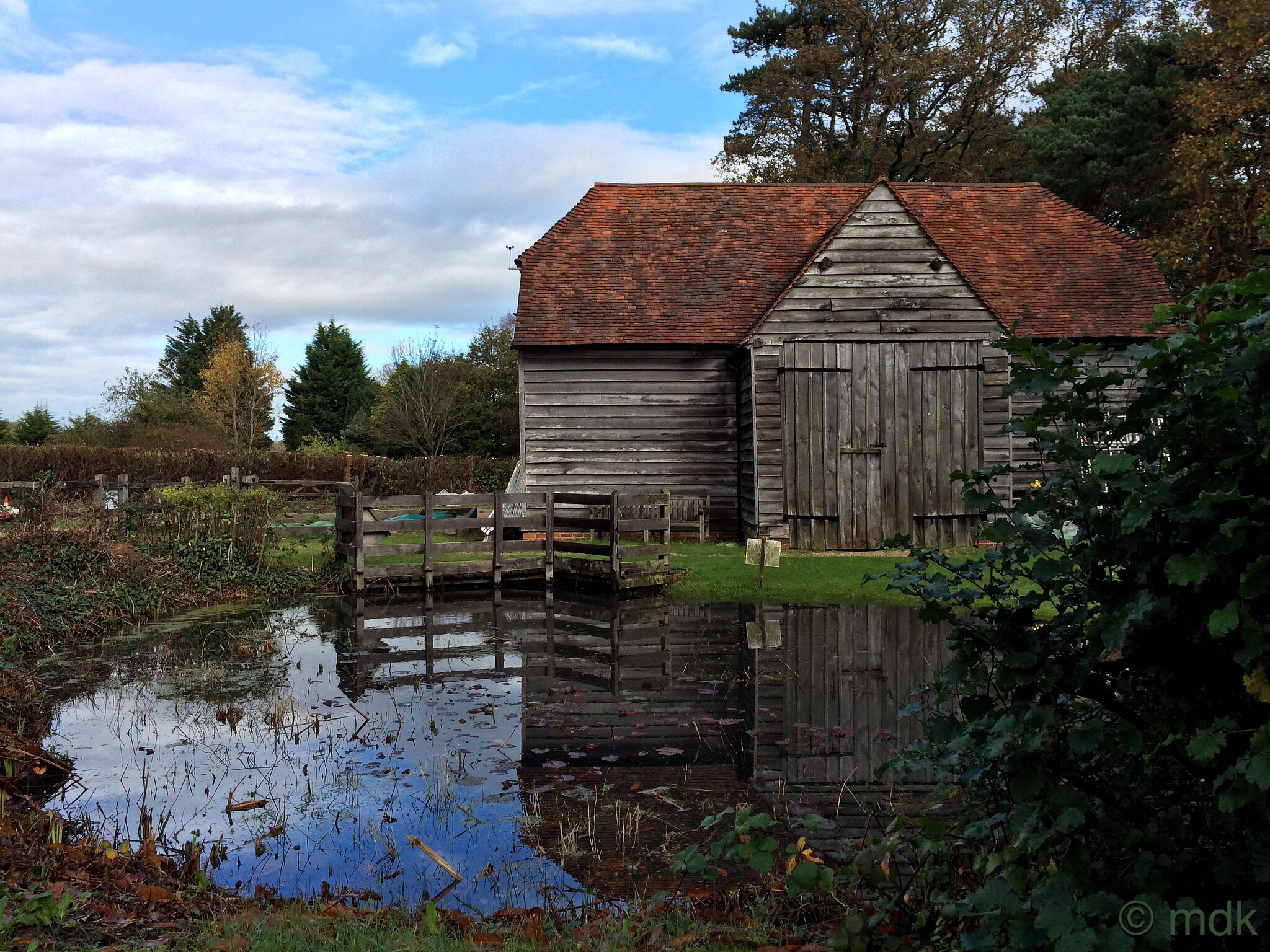 Homeward bound on my way along the footpath I spotted some bright autumn leaves and a few interesting fungi to make up for the anticlimax. Sadly I wasn’t able to identify a single one. Unfortunately, I never did manage to outrun the dark clouds either. The rain started about a mile and a half before I got home and, as a bus was passing the stop at the same time I was, I got on it. Cheating I know but I do have a free bus pass these days thanks to my job. 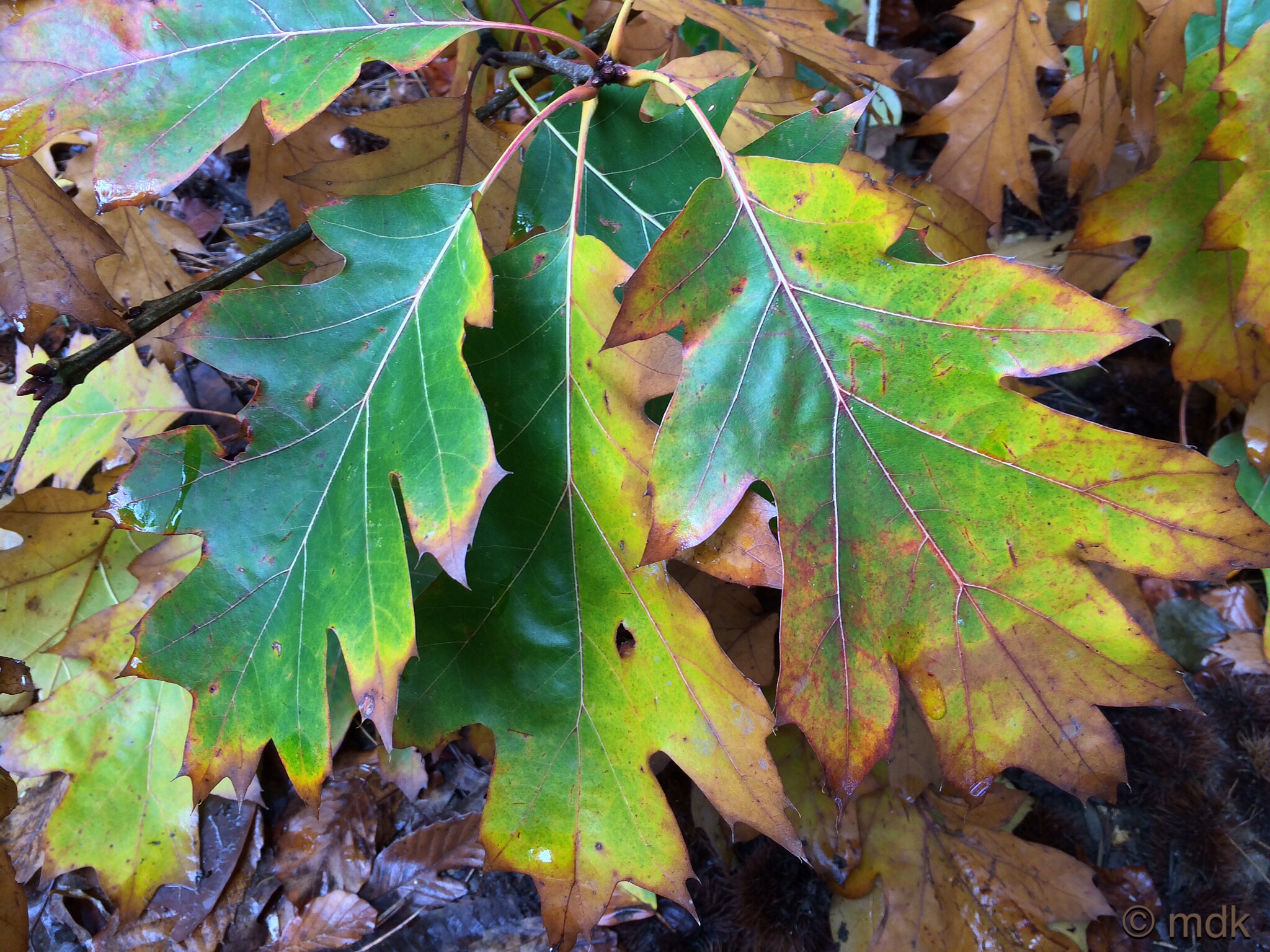 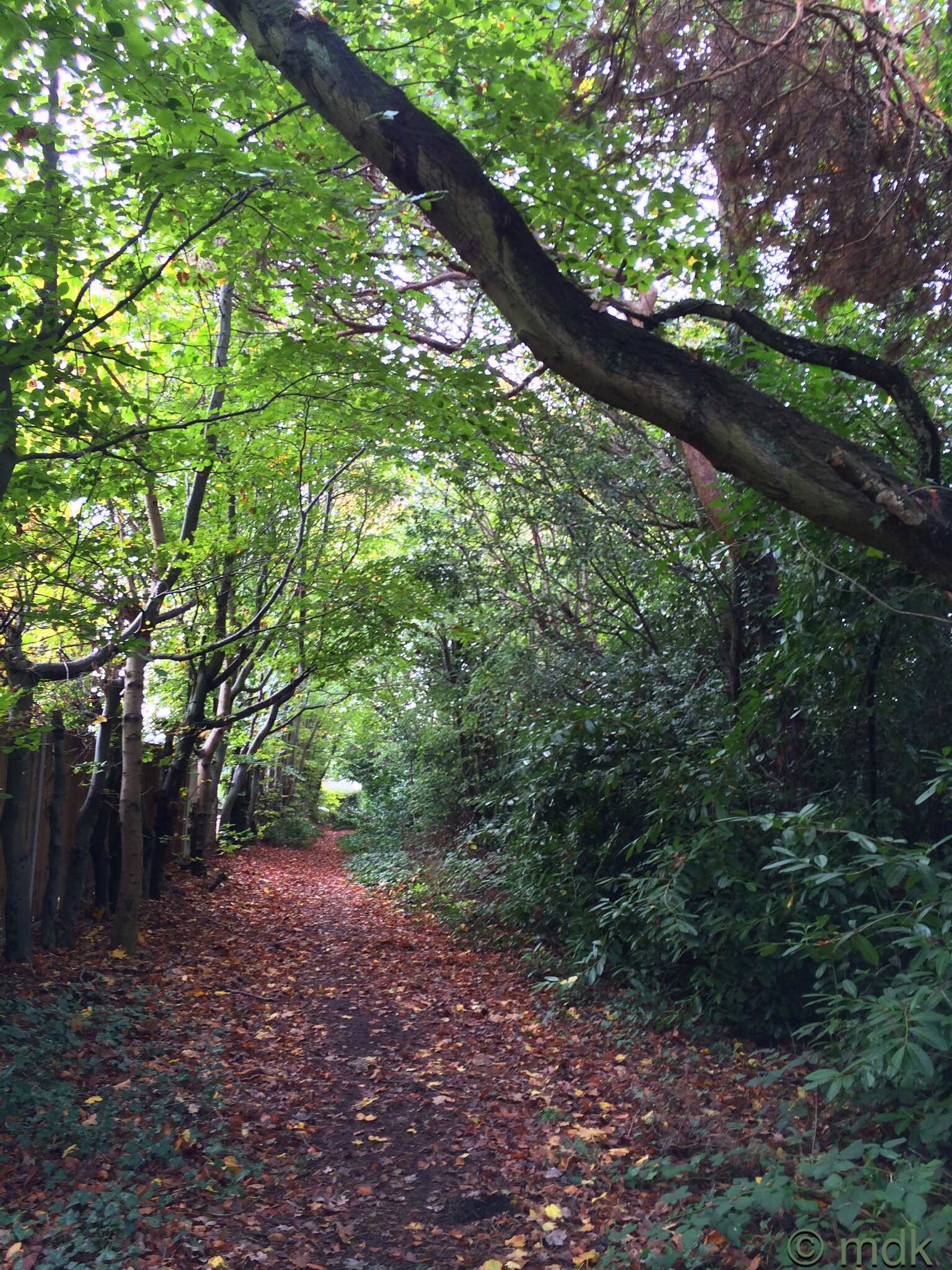 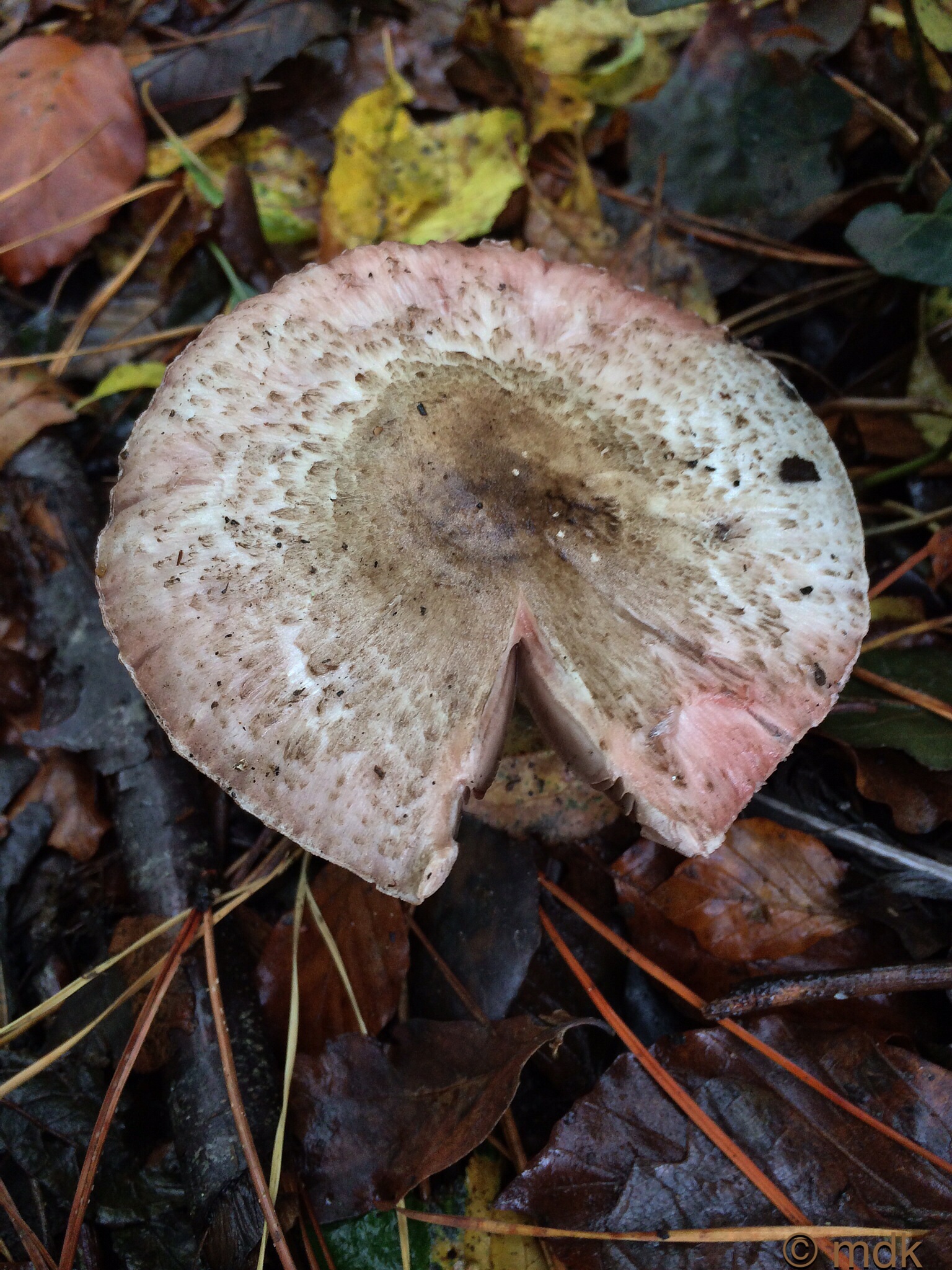 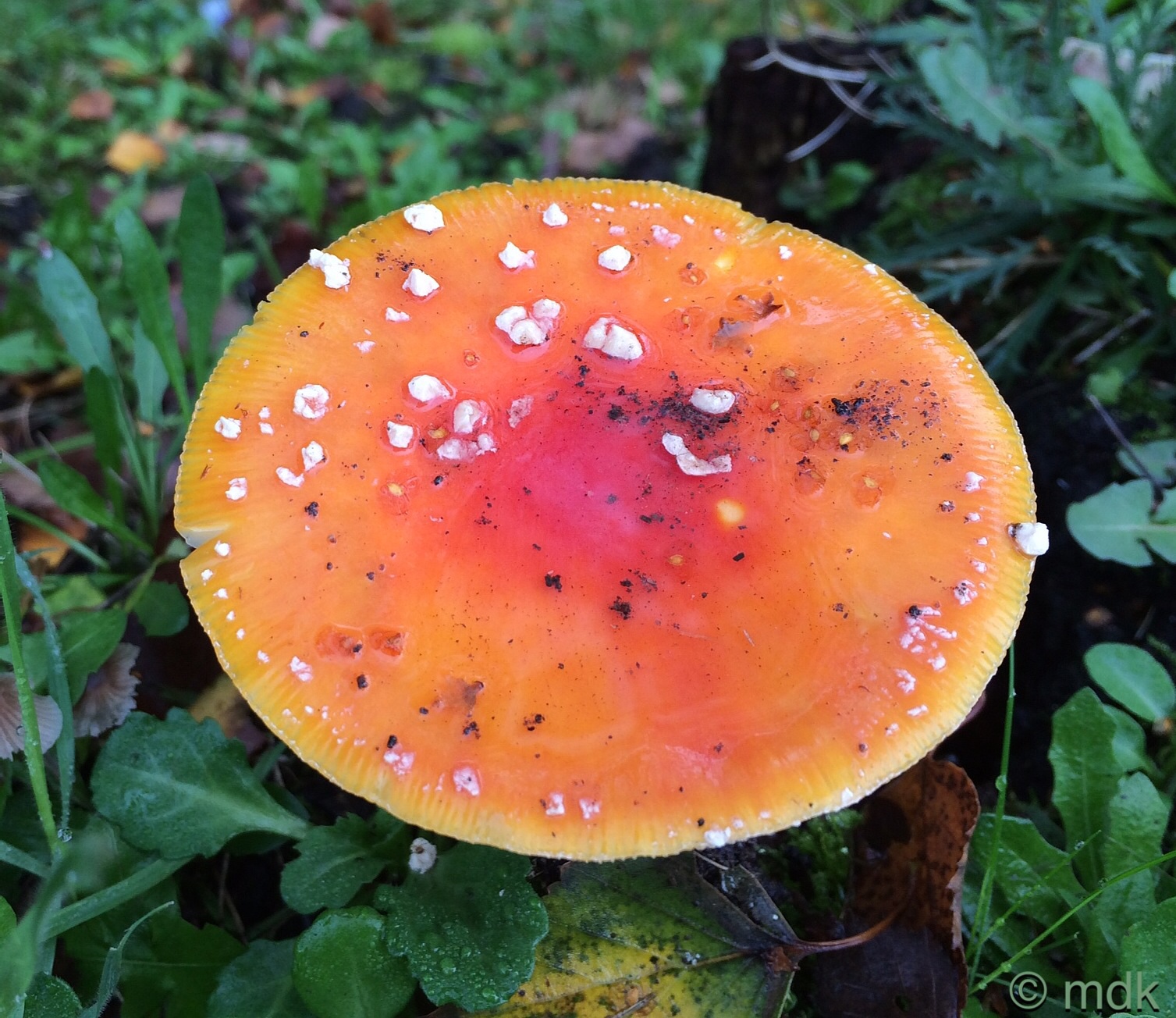 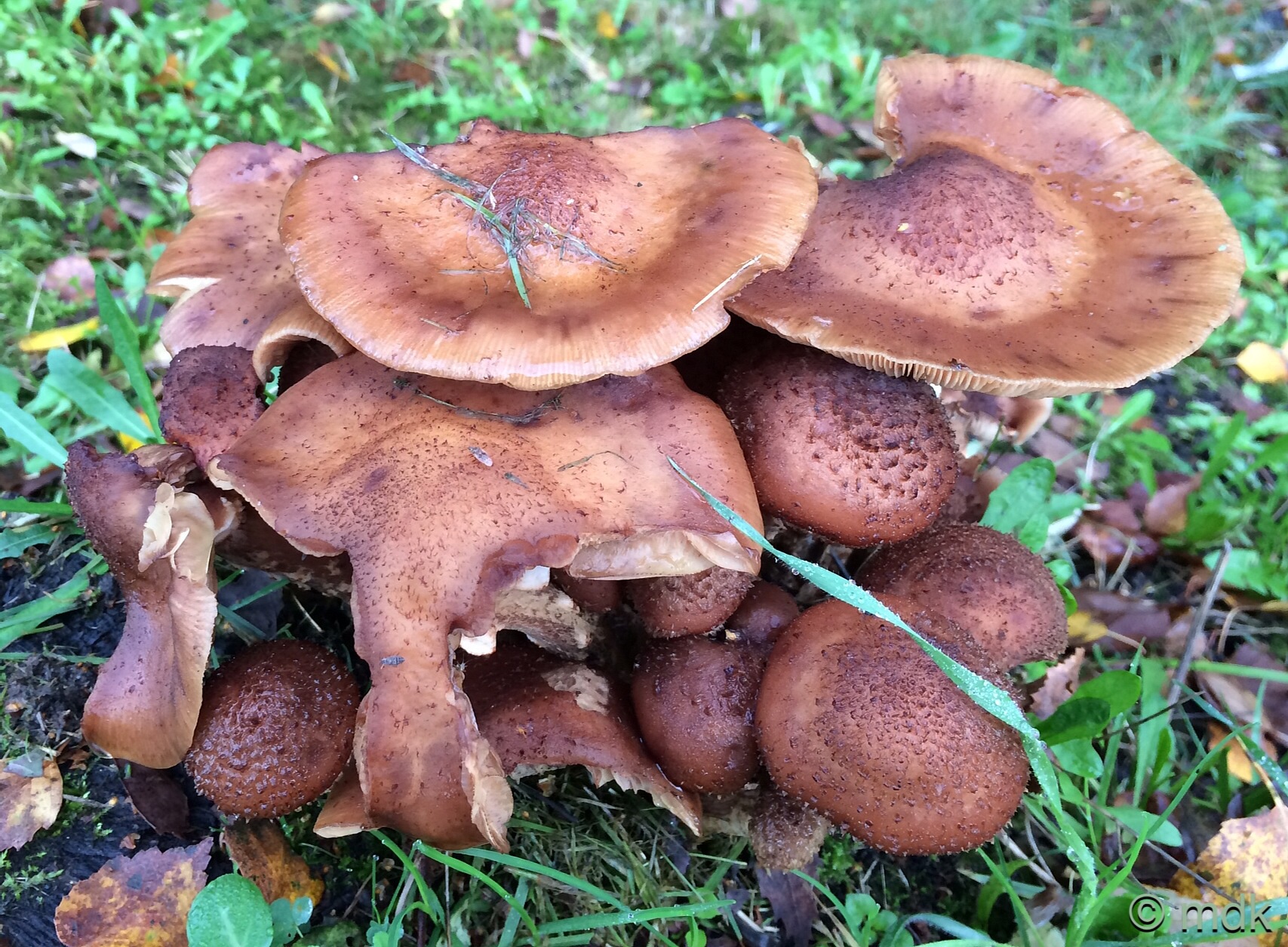 After all the walking, the slippery, uneven stones on the causeway, the worry about big puddles, as I was walking down my own front path, I slipped up. Isn’t that just typical? I slid down the path with my leg bent up under me, cut my knee and, most annoyingly, ripped my favourite walking trousers. Familiarity breeds contempt I guess. That’ll teach me to be a little more careful in future.