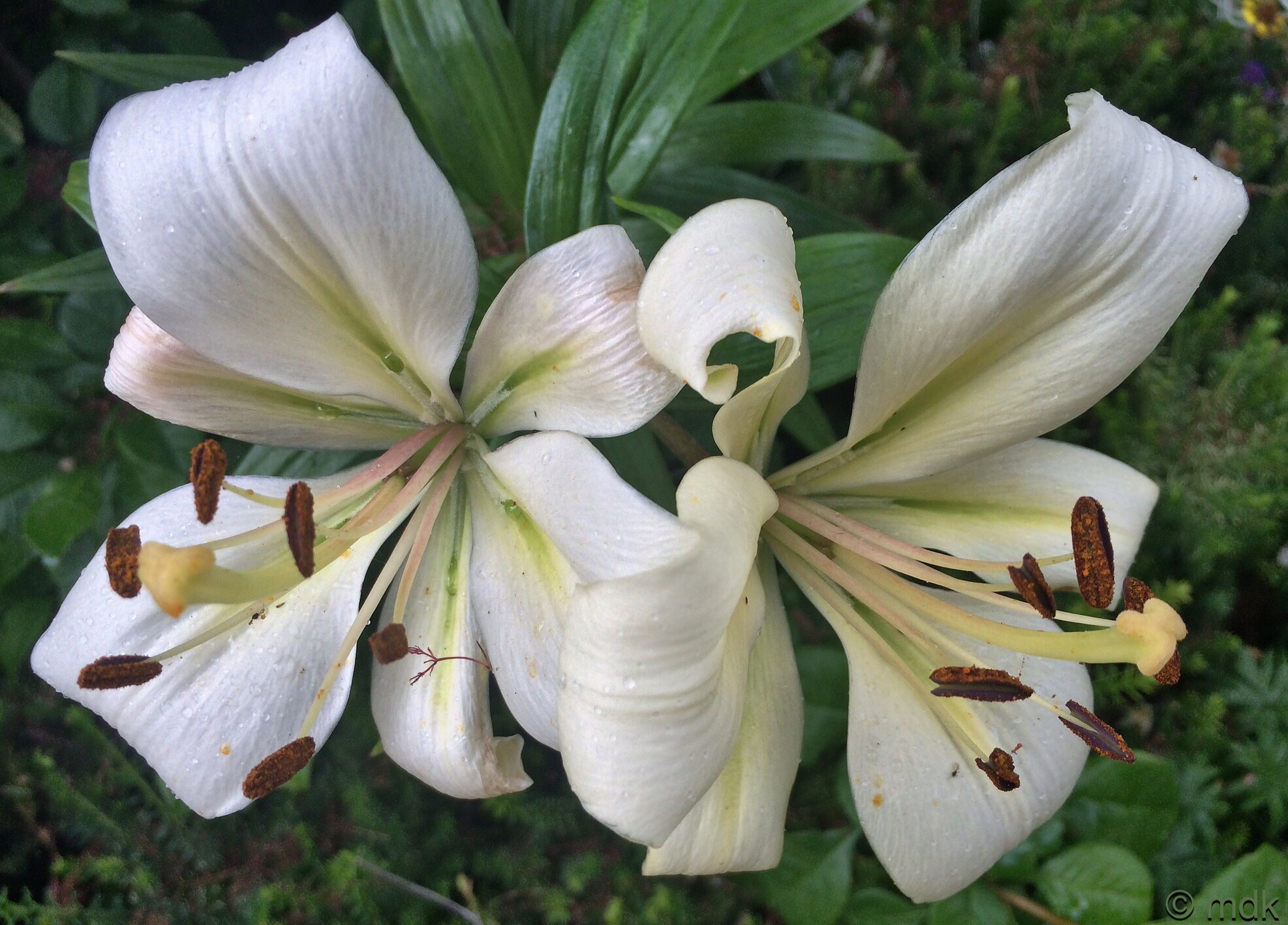 It was a disappointingly miserable morning, following a frustrating day where I’d spent precious hours sorting out an appointment that had been cancelled at the last minute instead of enjoying the sunshine. Originally I’d planned a walk along the river but the weather changed my mind. If I’ve learned anything in my years of walking it’s that the river is not the best place to be when the heavens open.

There wasn’t exactly a plan but I was thinking woodland where there might be a little shelter if the worst happened. As I strolled up the garden path I noticed my lilies had opened so that was something to smile about at least. There’s quite a choice of woodland walks within a five mile radius of my house and I started with one of the nearest, Hum Hole. At this point it wasn’t actually raining although I still had to watch out for the slippery paths. There was a tiny patch of blue amid the grey clouds as I looked over the grassy meadow in the middle of the wood and as I climbed the hill I had my fingers crossed it would grow.

By the time I emerged onto the road at the top the blue had disappeared like a mirage and it was beginning to drizzle. This at least made up my mind about where to go. I’d had half a mind to return to Hatch Grange and the woods I’d discovered after my dentist visit but I could see it turning into a repeat performance with torrential downpoiturs and turning back. Instead I decided on West End Copse, a little nearer and with regular buses if things went badly pear shaped. 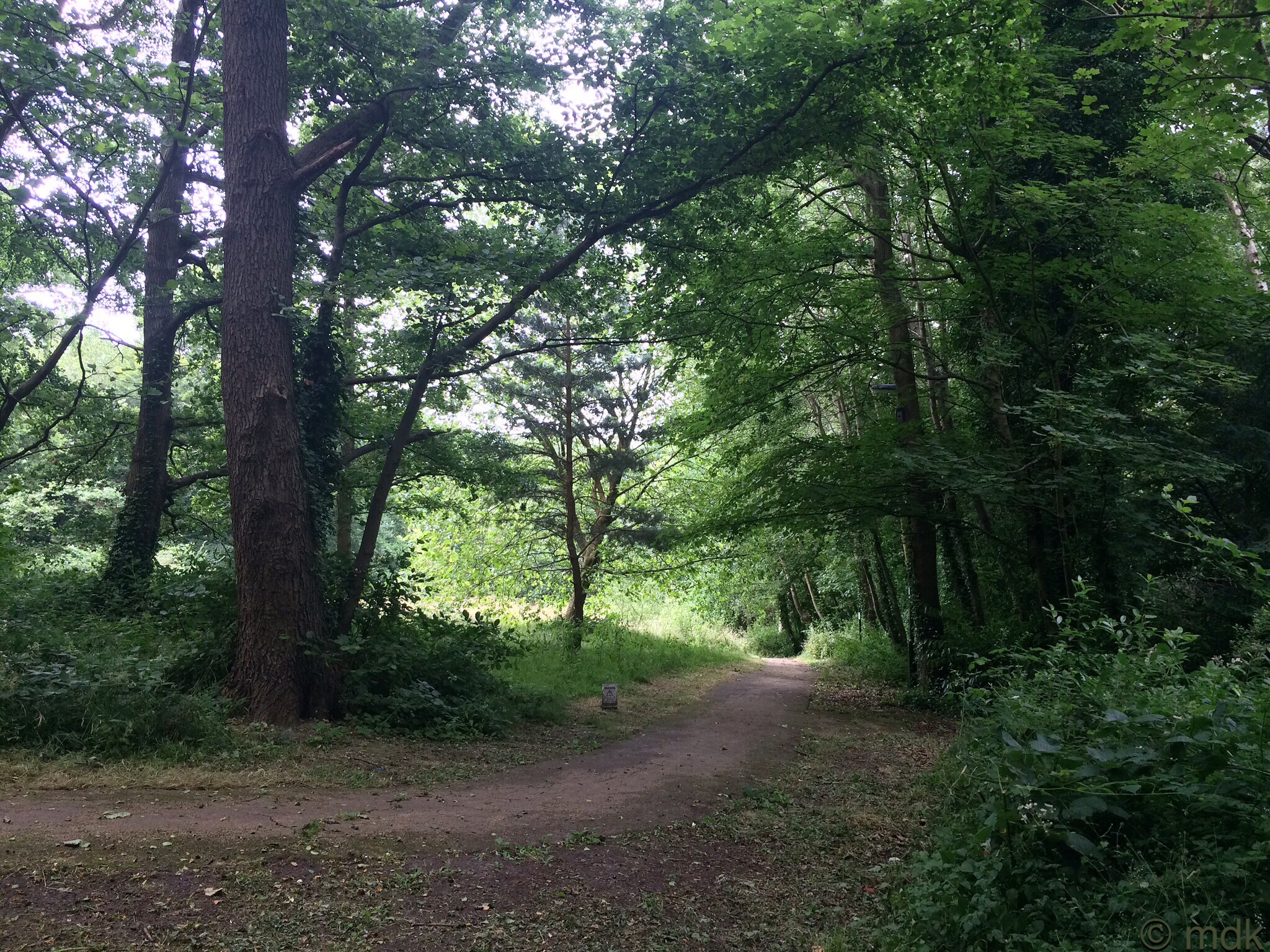 It was less than a mile from the top of Hum Hole and, although this was all road walking, they’re fairly quiet roads and leafy for the most part. The drizzle had stopped long before I reached the copse but the blue sky hadn’t returned. Pretty soon I was walking through trees underlaid with blackberries to the gate. This is not a large wood and, although getting lost is a distinct possibility, following any of the wider trails will eventually lead you back to a street. 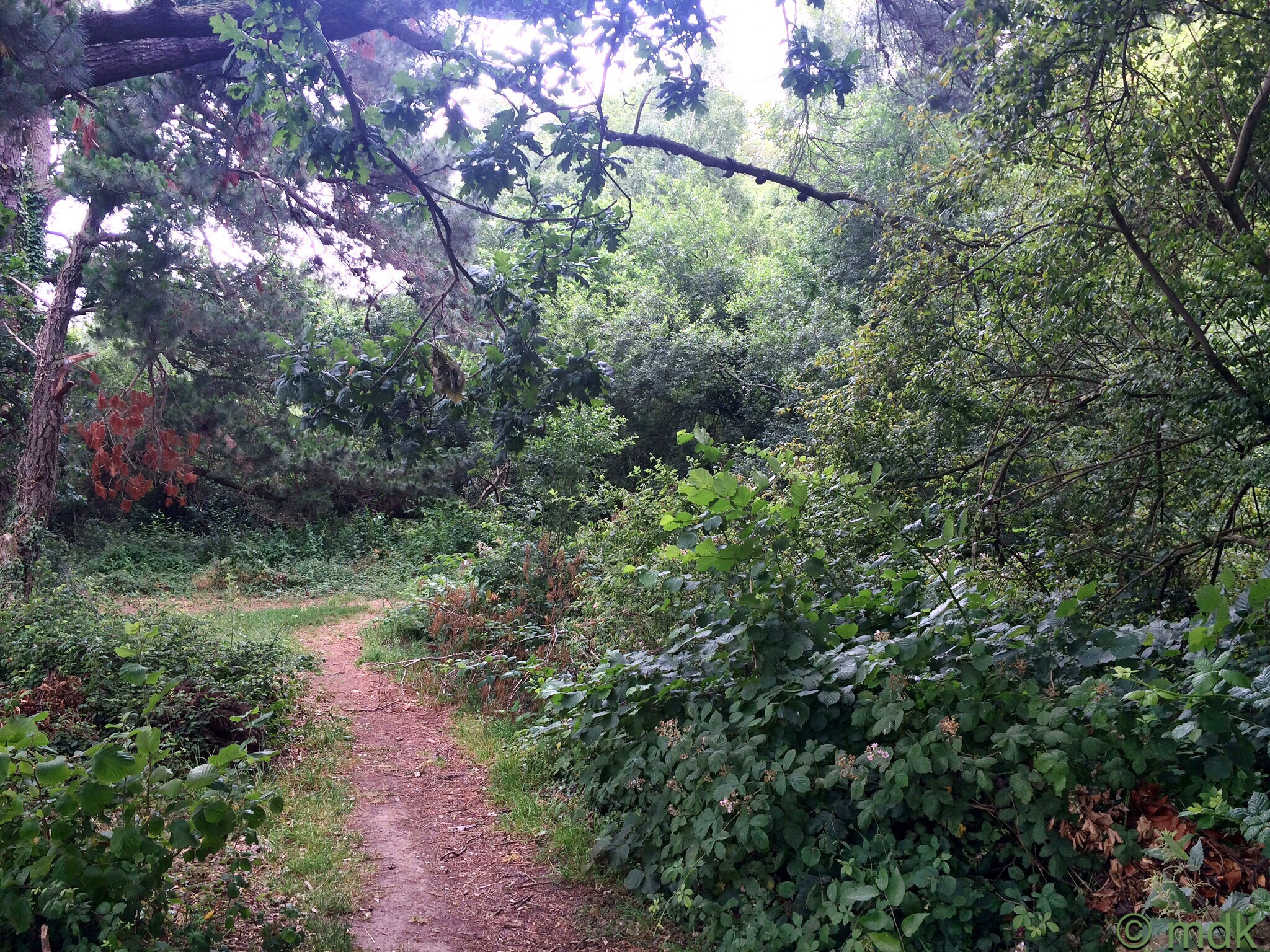 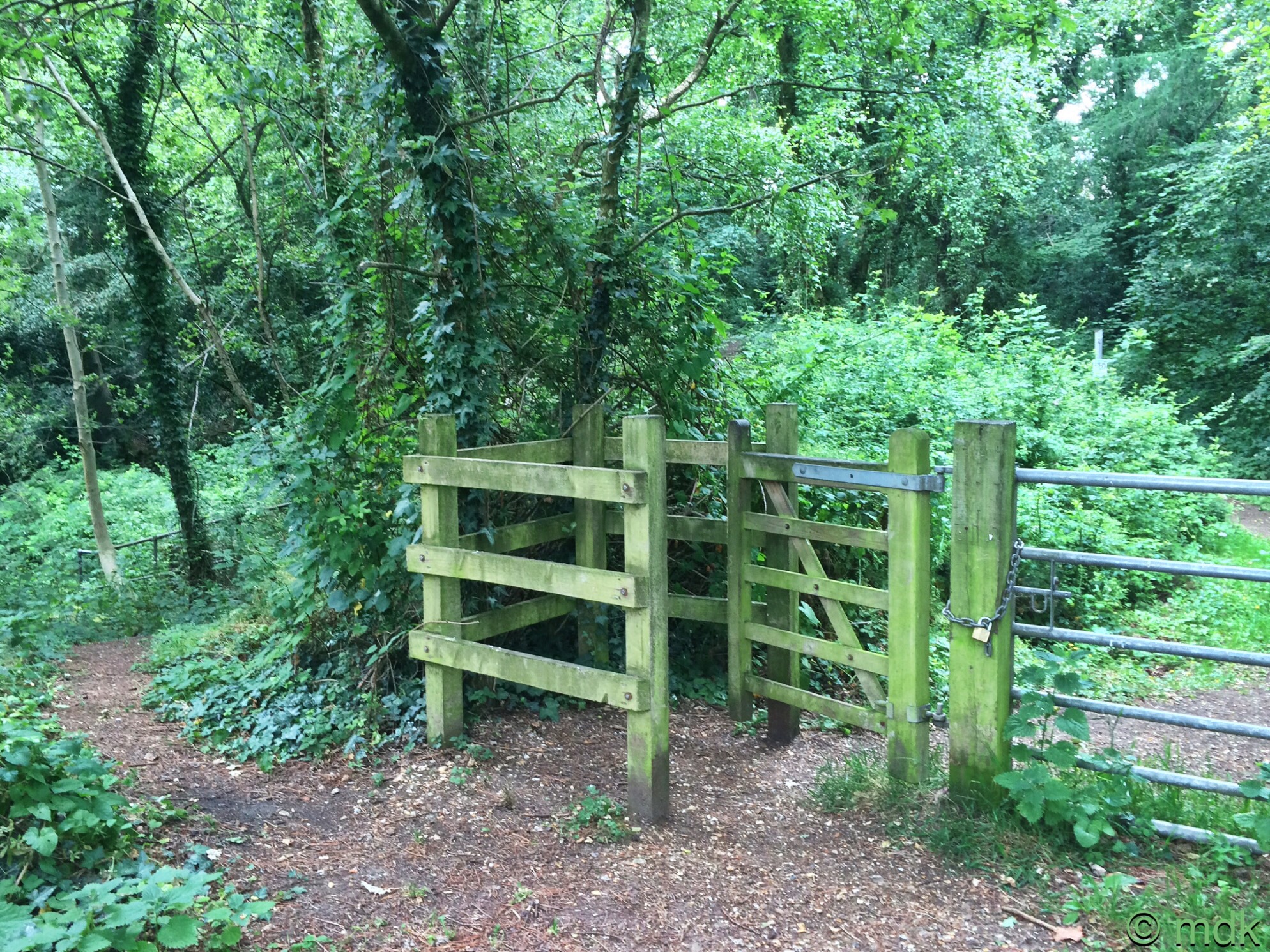 There were plenty of choices but in the end I decided on the high path along the top of the copse. If I was lucky I might stumble upon the ground bees I saw a few years back but have never been able to find since. Soon I could see the stream running at the bottom of the gully through the copse. As far as I know it doesn’t have a name which seems a shame. All streams should have names in my opinion.

When I came upon the giant table and chair in a clearing I knew I was more or less in the middle of the copse. The fallen leaves surrounding it looked like a mass of scattered gold coins. The first time I saw it, from a distance through the trees, I didn’t realise the table and chair were oversized. There was no point of reference so I thought they were far closer than they were. There seem to be a lot of these giant pieces of furniture in woods for some reason and they certainly play with my sense of distance. Maybe that’s the point. Either that or there are a lot of giants about that I haven’t seen. 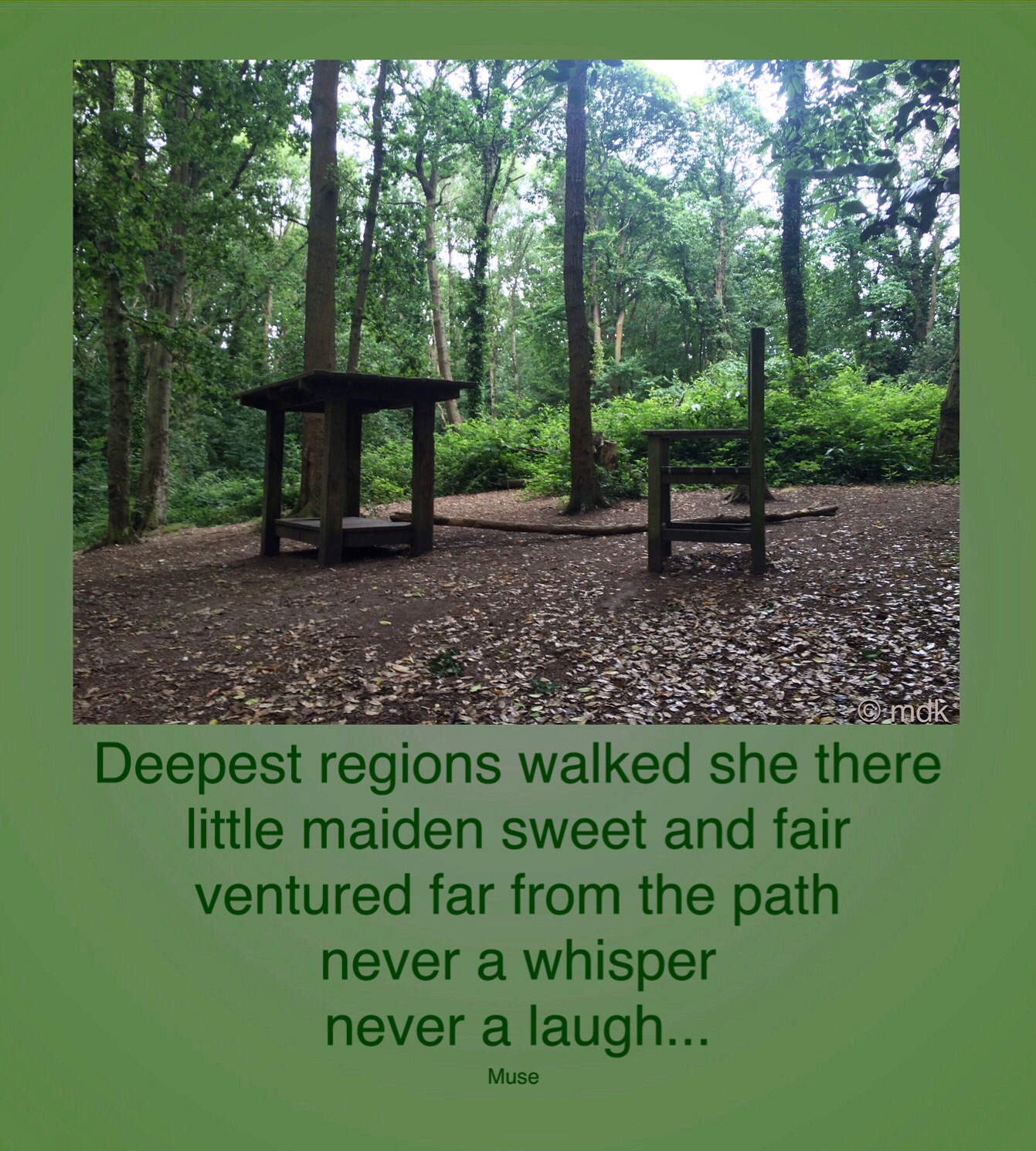 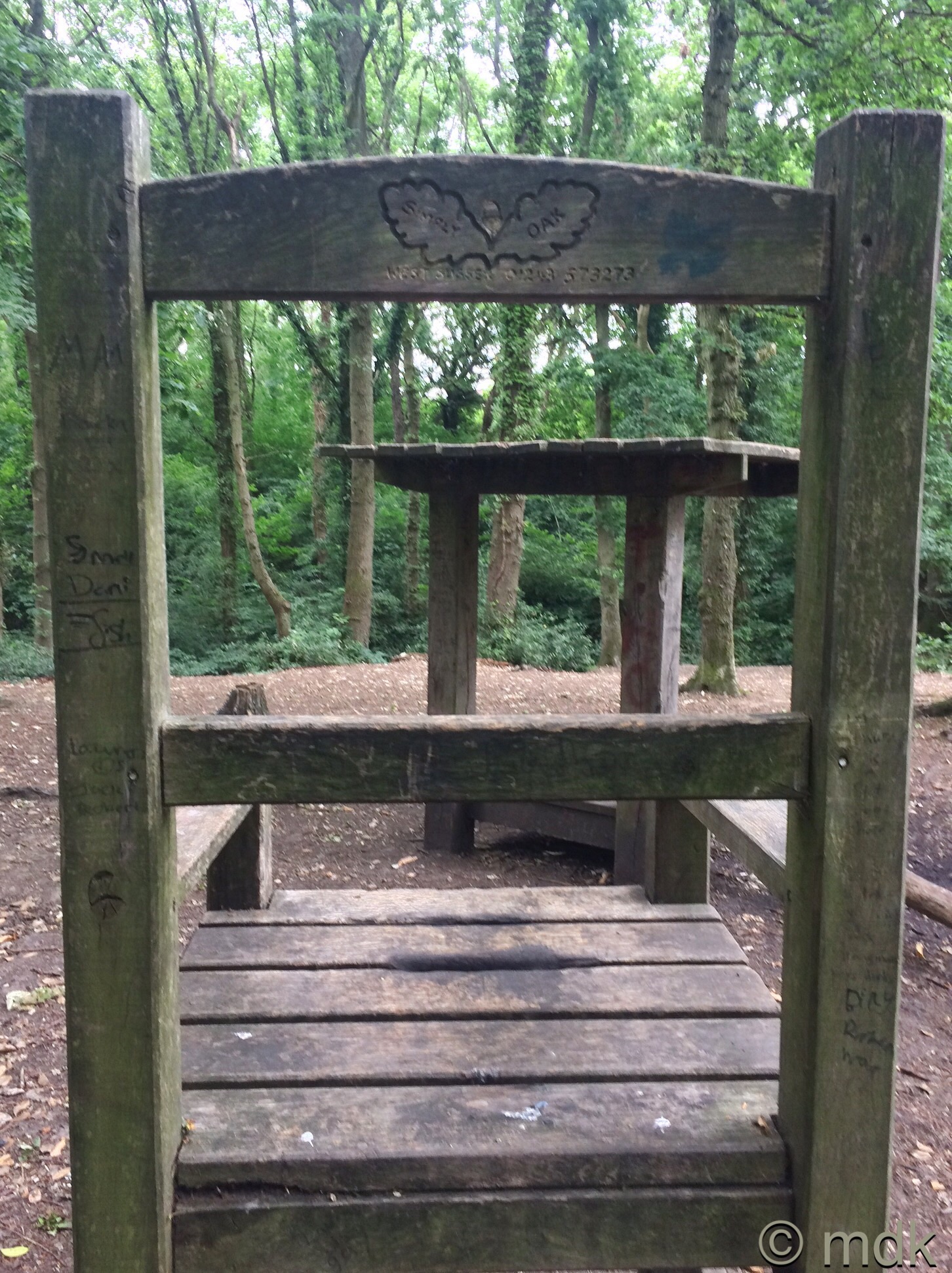 Gingerly, I descended the steep bank towards the gully. This was where I thought I’d seen the ground bees so I kept my eyes to the ground. There were no bees so either I was wrong about where I’d seen them or they’d abandoned their nesting site. Right about then it began to rain again, I could hear the drops hitting the trees before they tumbled down through the leaves and hit me. For a moment I looked back at the giant table and wondered if I should climb back up the bank and take shelter under it but, in the shelter of the trees, the rain wasn’t heavy so I carried on. 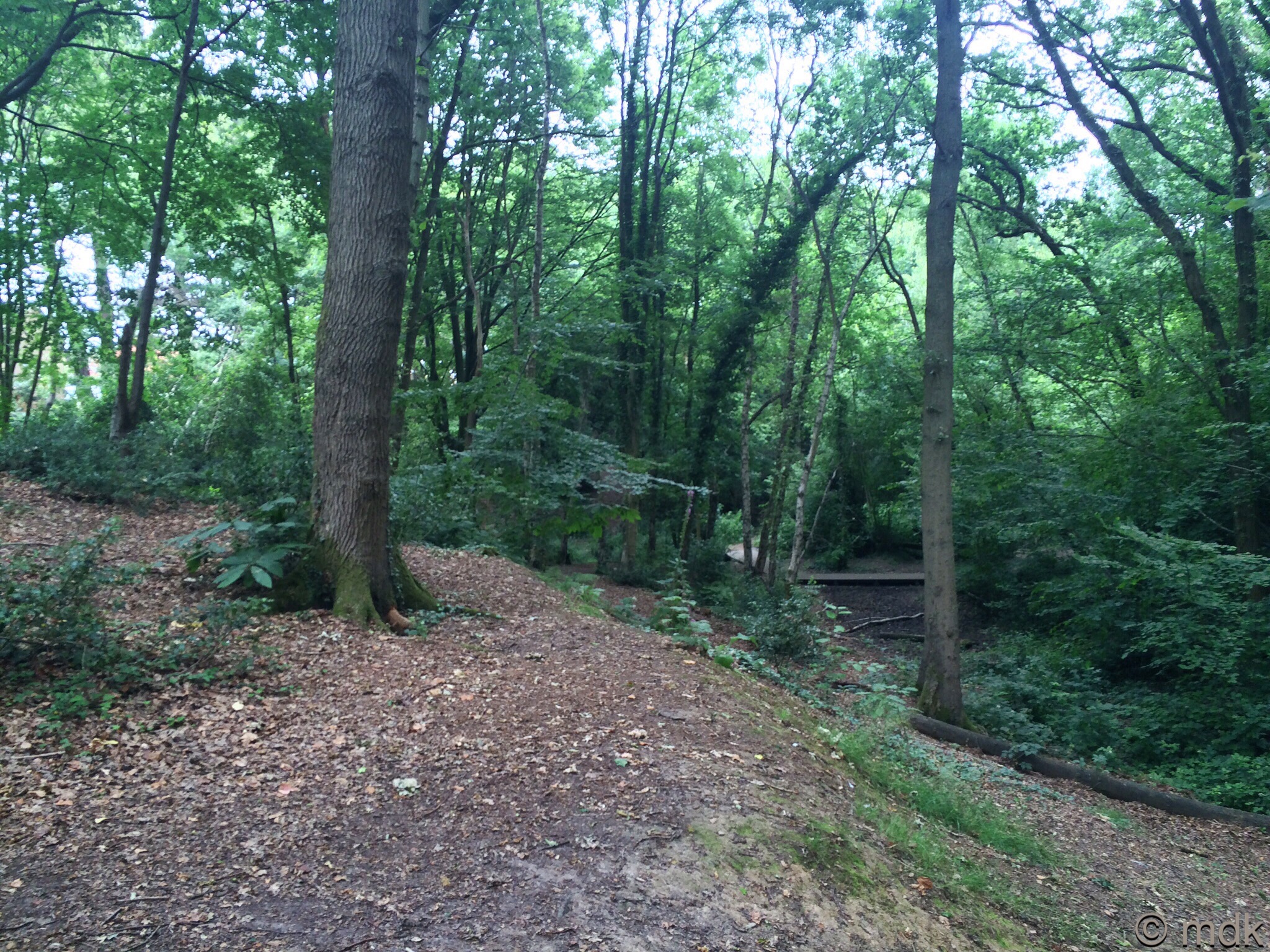 Climbing the bank on the other side of the gully instead I found a solitary foxglove taking advantage of the dappled light. Close by there was a gigantic tinder fungus, so large and gnarly it must have been very old.  It led me off the main path onto one the of the narrow trails and, with no real purpose, I kept on going. There were fallen trees to climb over all along the trail and when I heard creaking I began to wonder about the wisdom of this particular trail. 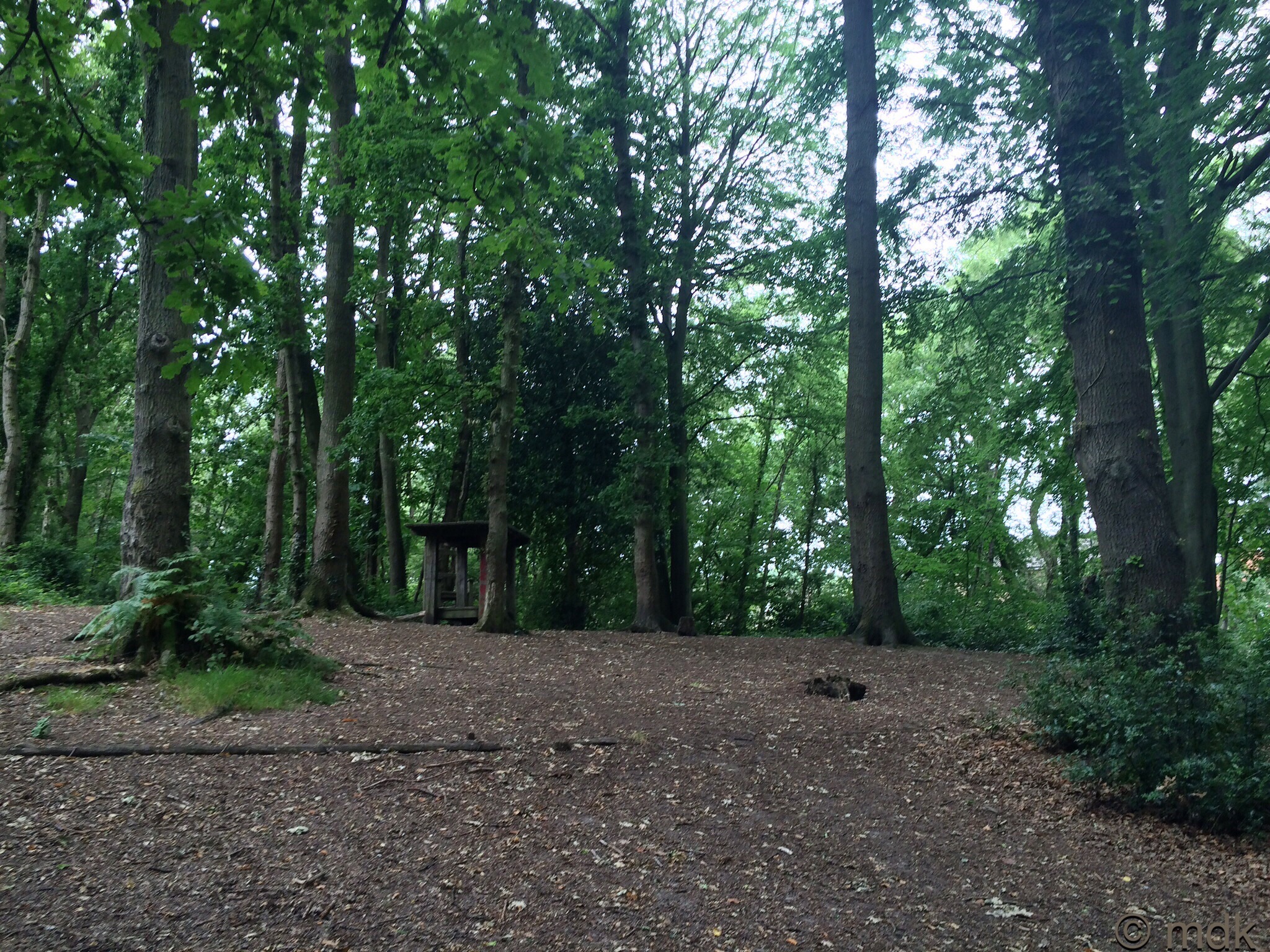 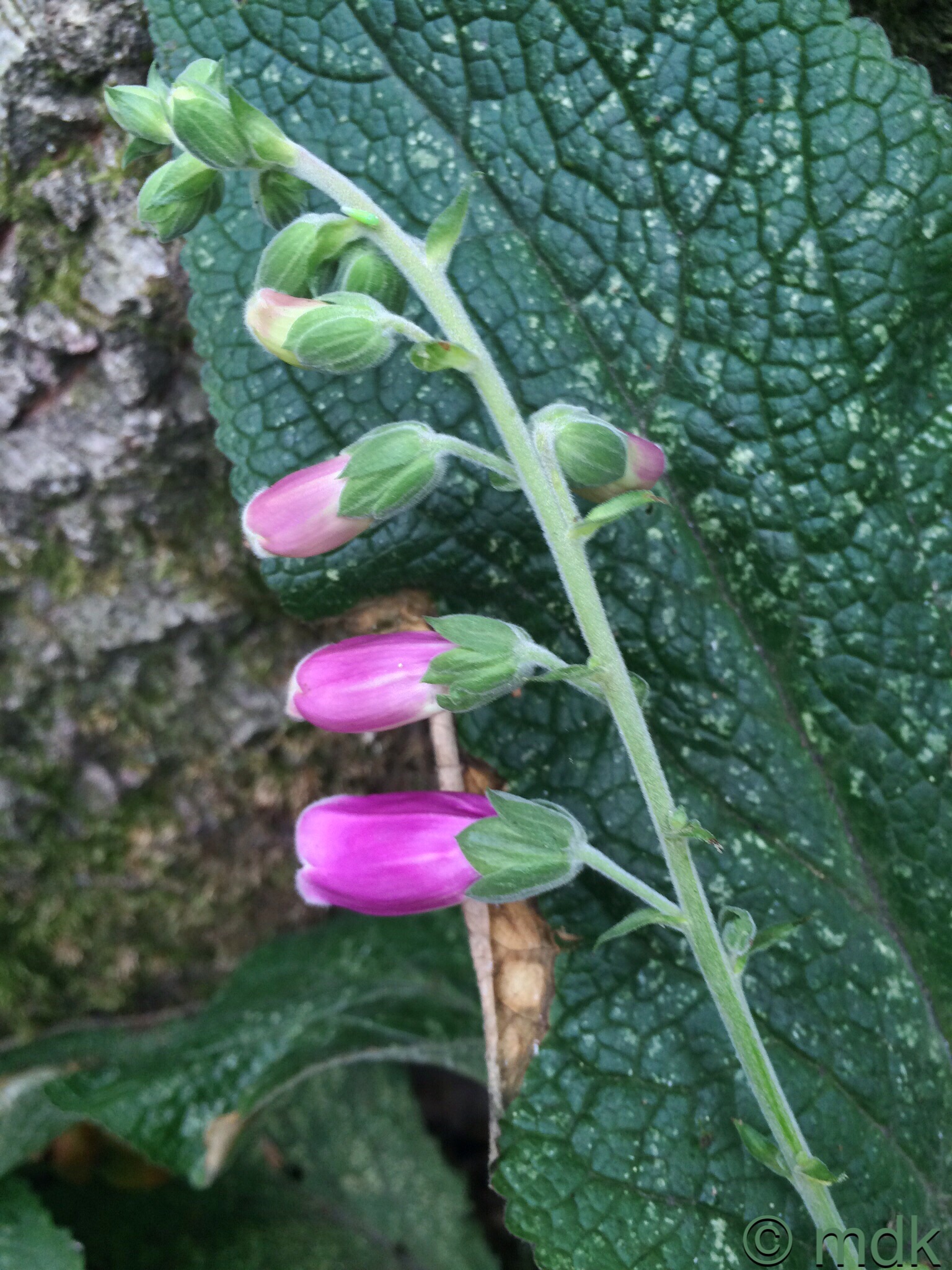 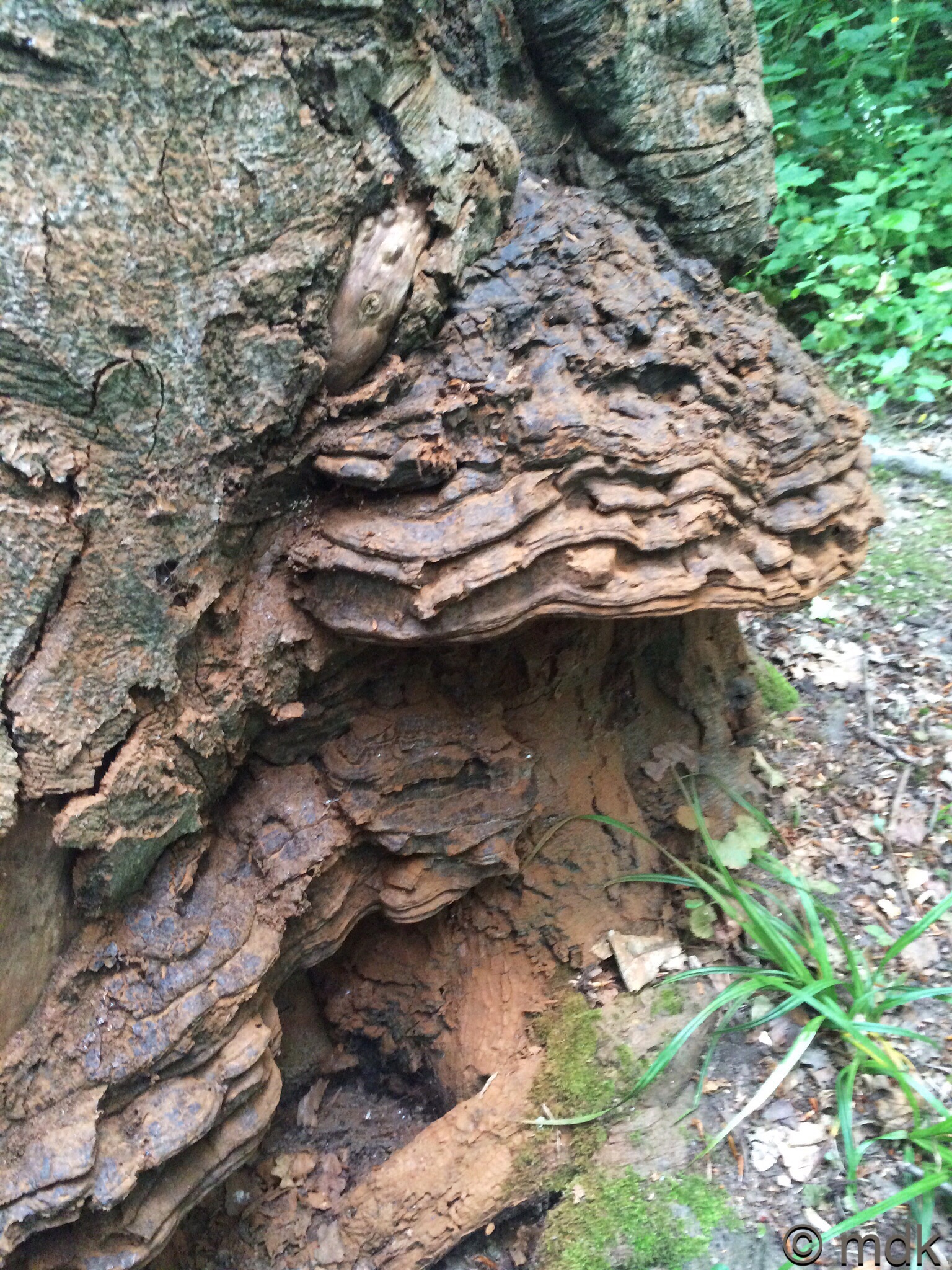 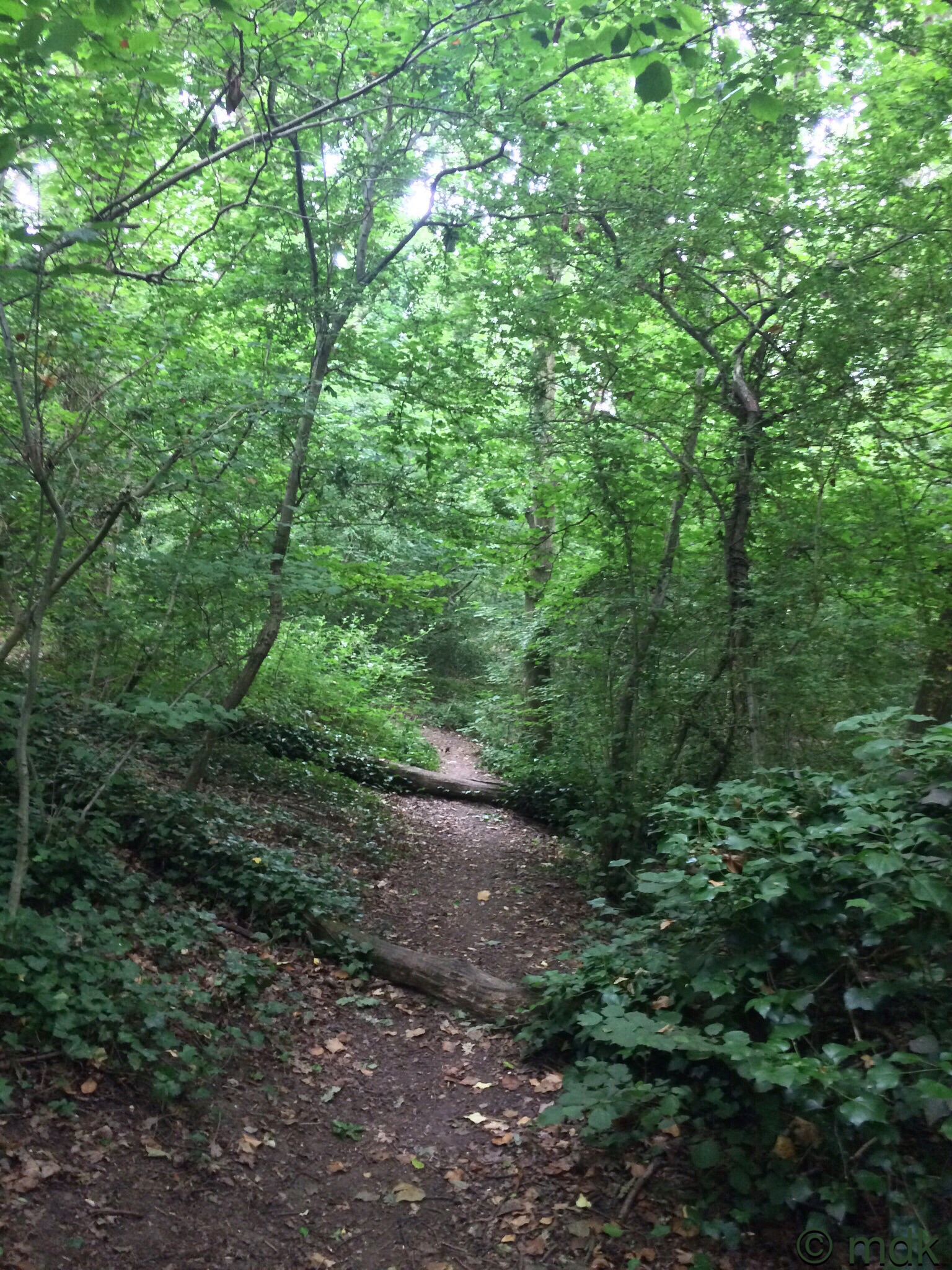 The further I went the louder the creaking got and I began to look up into the trees, afraid a branch, or worse still, a whole tree was about to drop on my head. As soon as I could I got off the trail and back to the main path. Being crushed under a falling tree really wasn’t part of my Tuesday morning plan. Soon I was back beside the stream. The rain seemed to have stopped and, from the green light, I guessed the sky must have brightened although I couldn’t see it through the canopy. 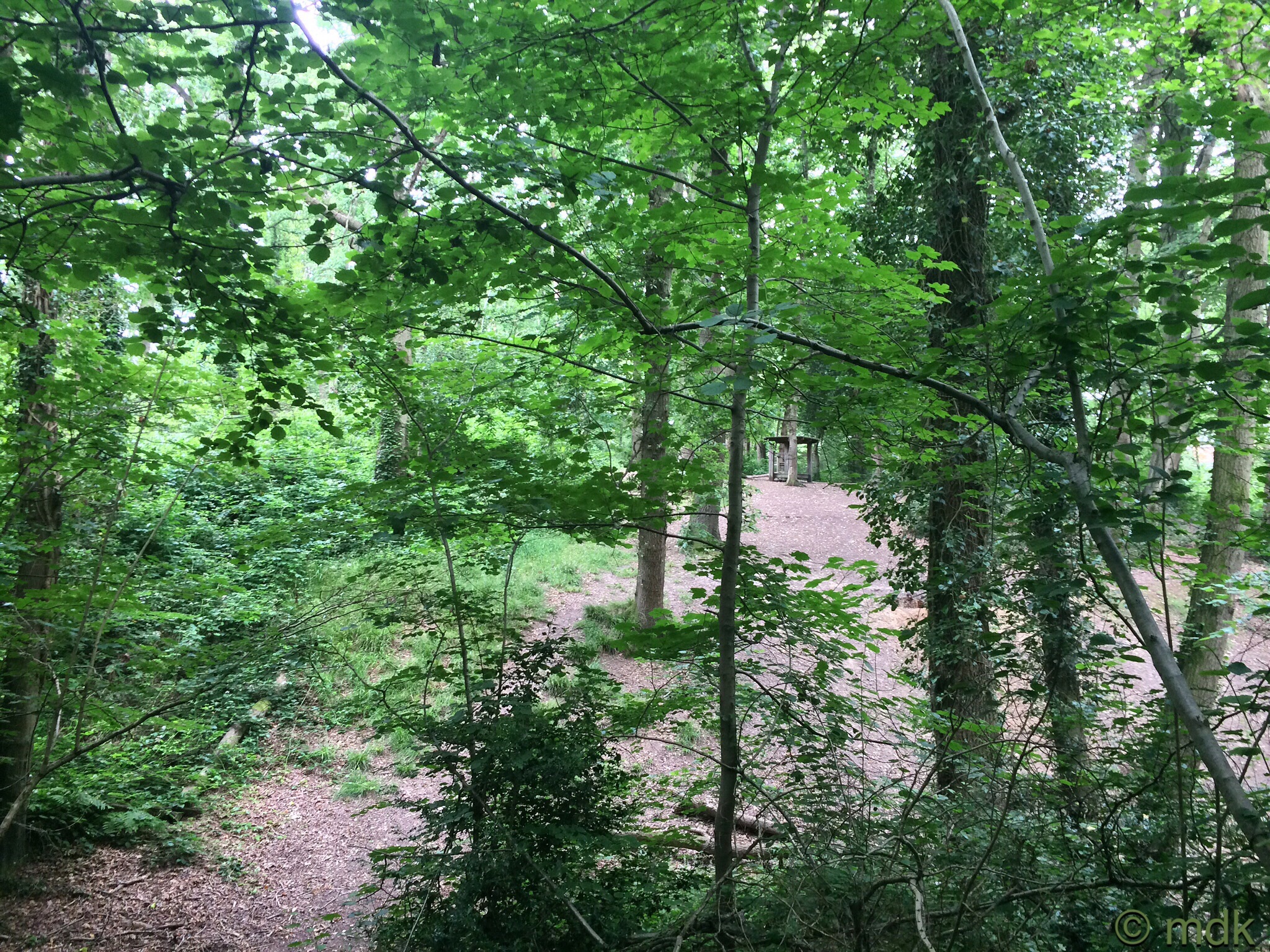 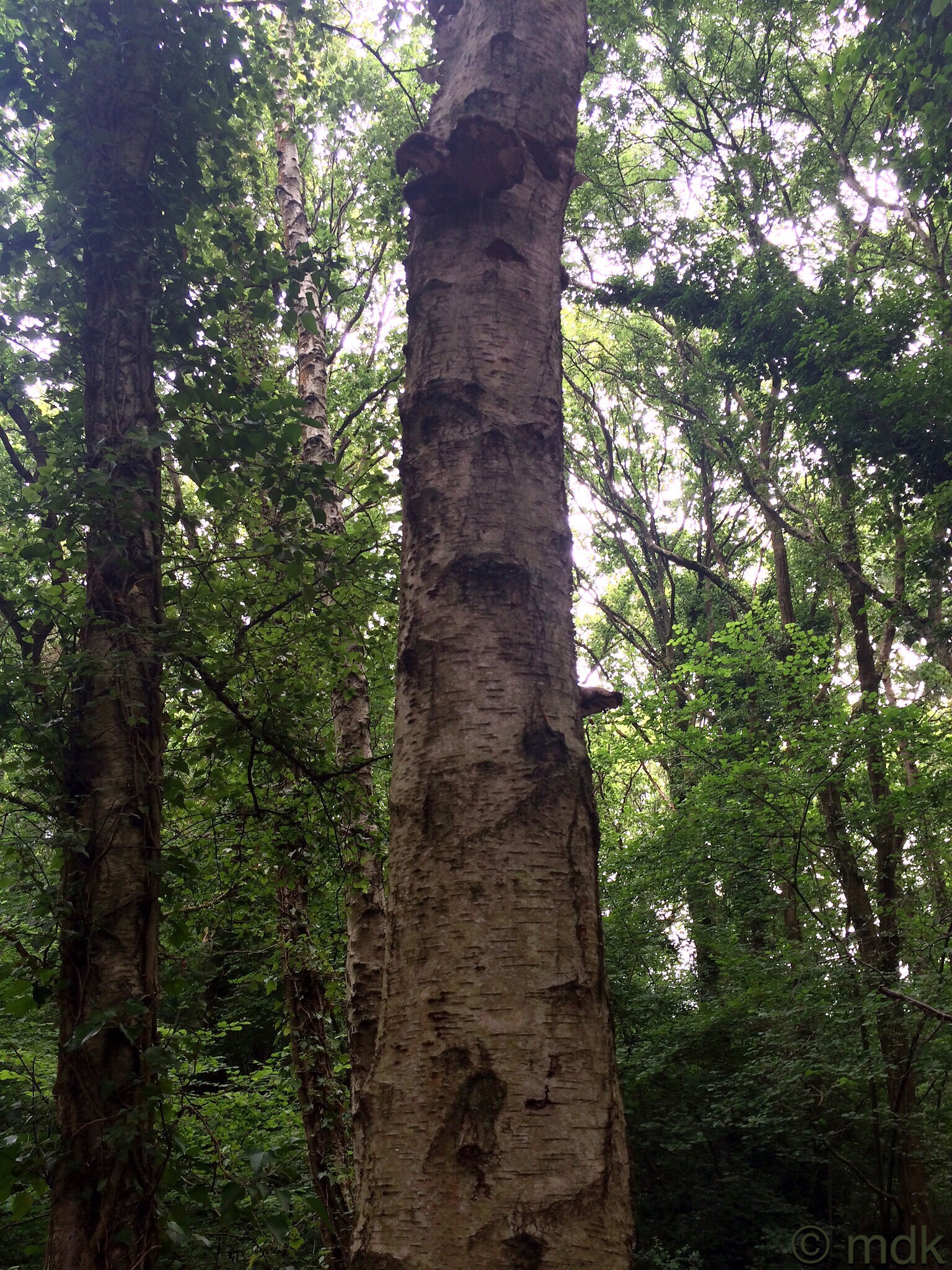 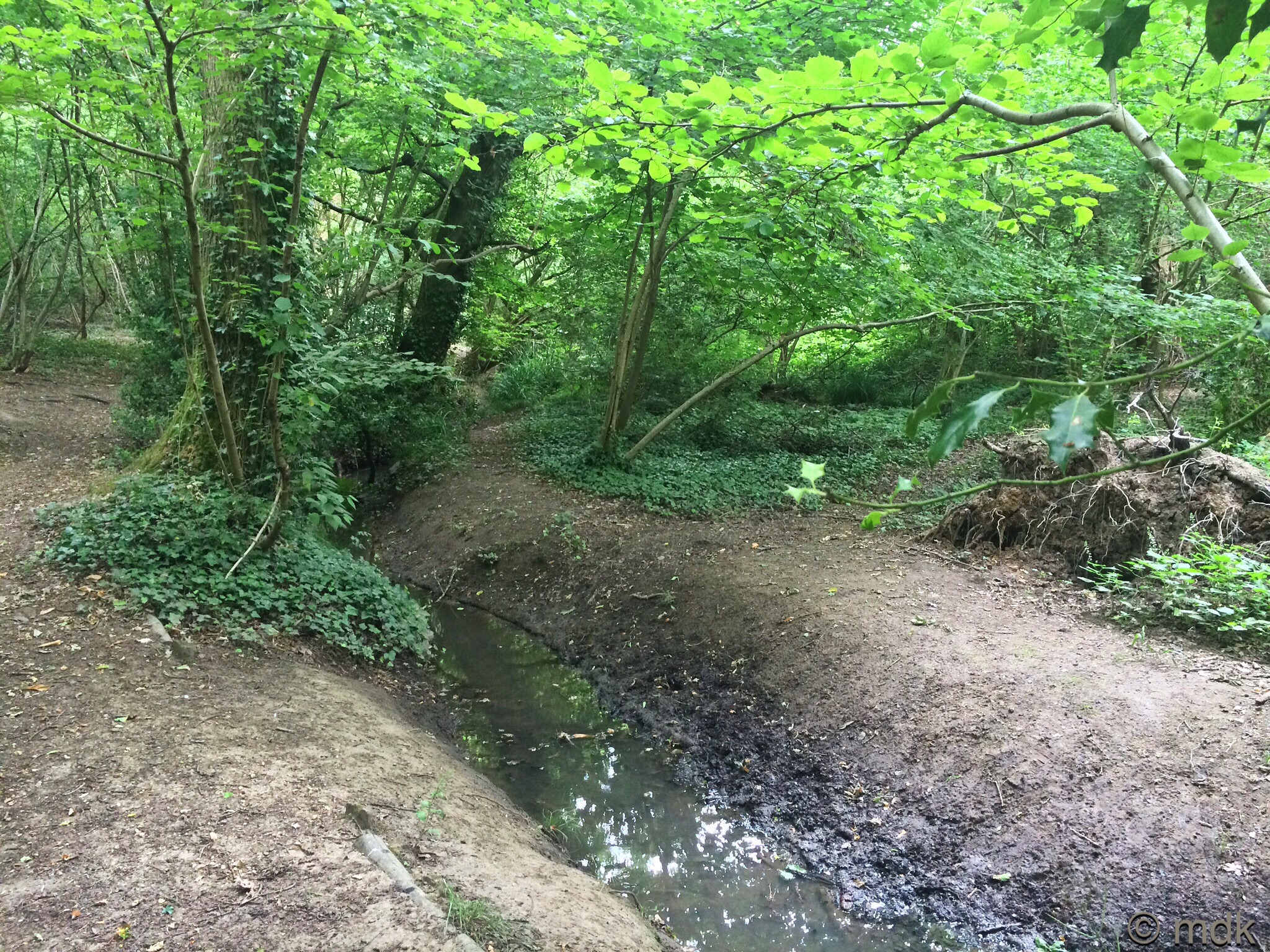 Still aimless I followed the stream until I came to a small Boardwalk over some boggy ground. Following this I found a signpost I don’t remember from previous walks. On it were the names of the streets each trail led to. I’d reached a crossroads. Sitting on a dryish bank I contemplated the sign for a while. Duddon Close was where I entered the copse so I dismissed that trail as it would just be back tracking. Ullswater Avenue would take me towards the river, at least I thought it would, and Ivy Lane would end up in the same place by a shorter route. That left Pine Walk. It was a name I couldn’t place but I thought I’d give it a go if only by process of elimination. 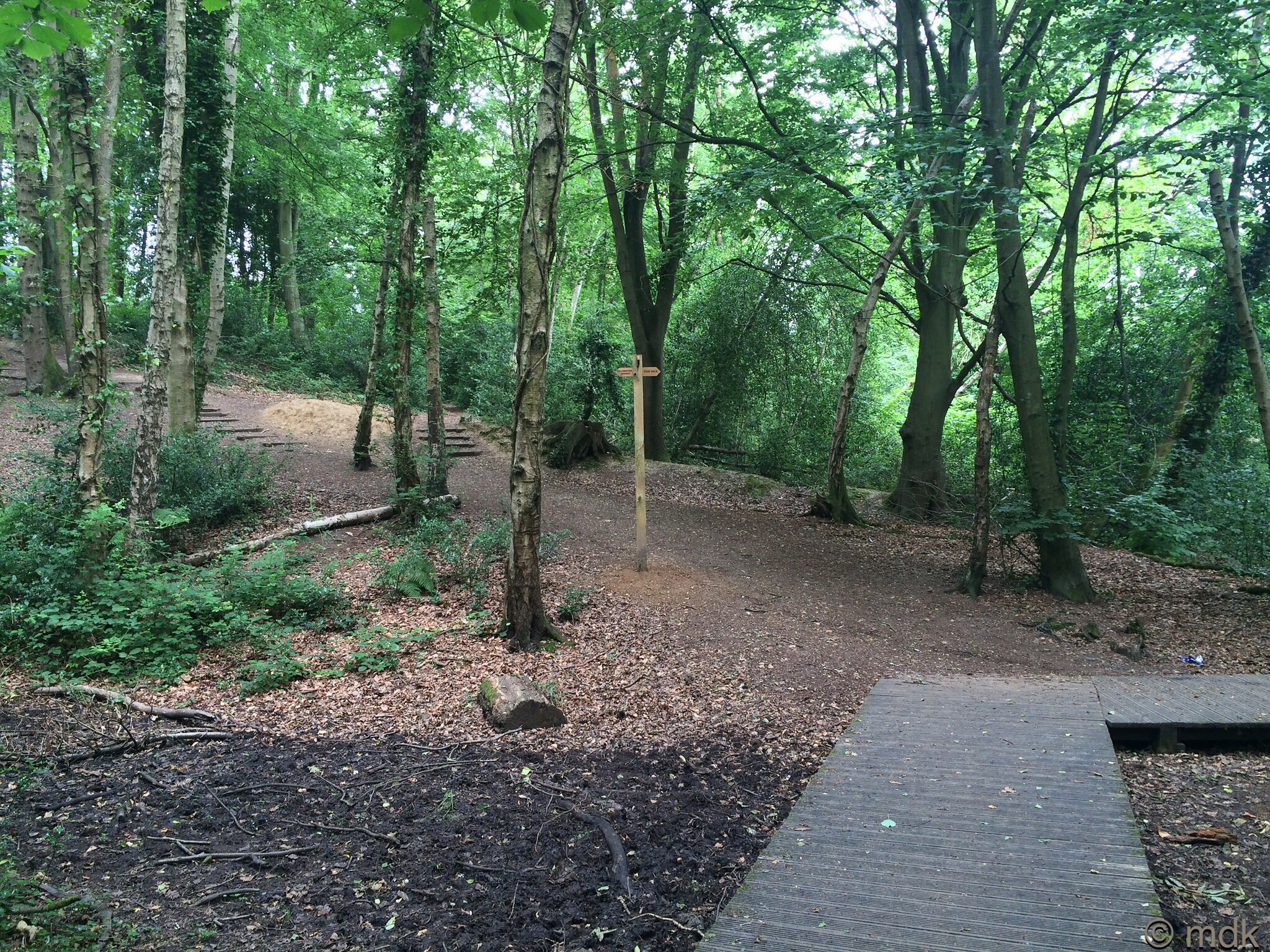 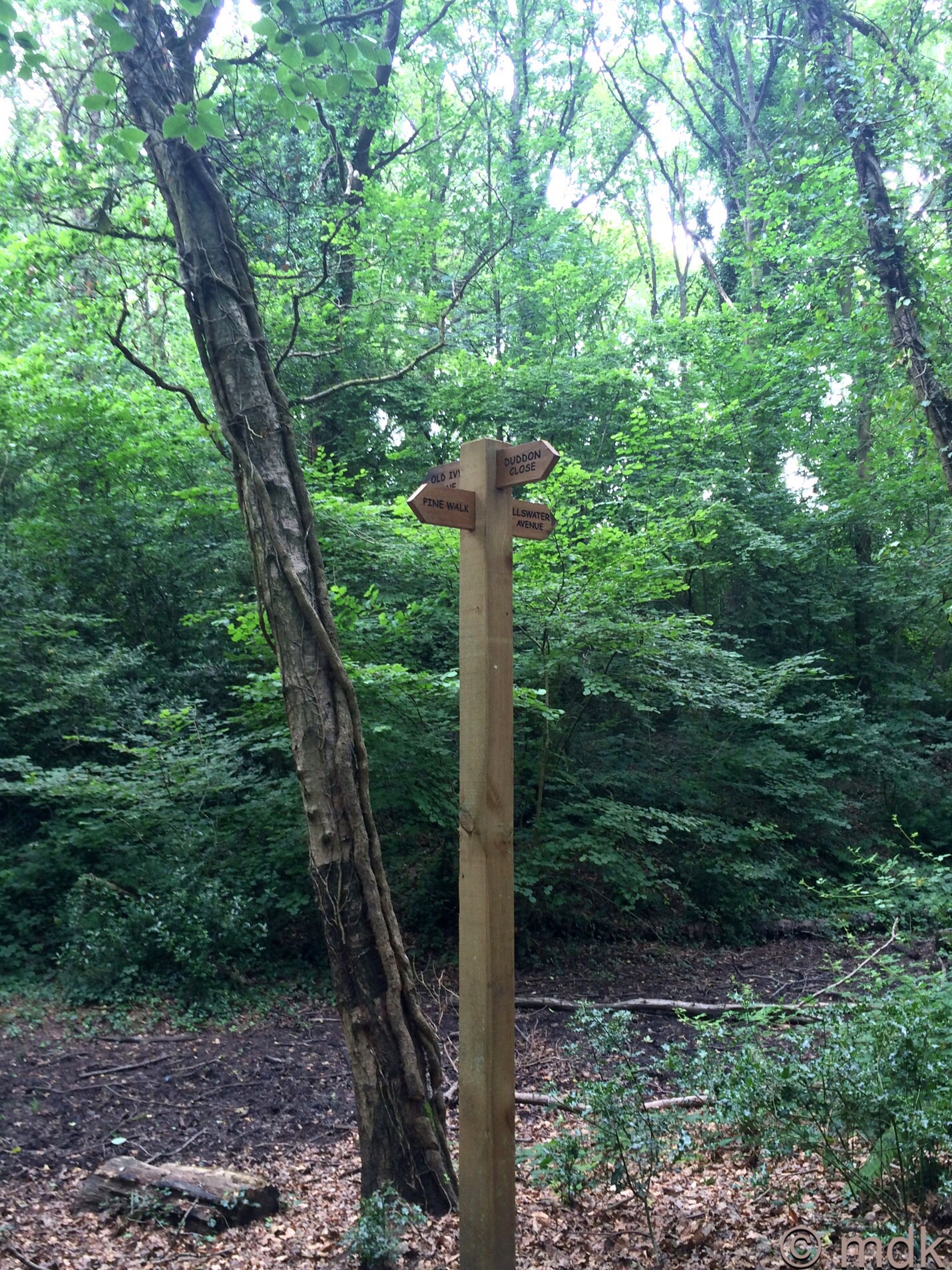 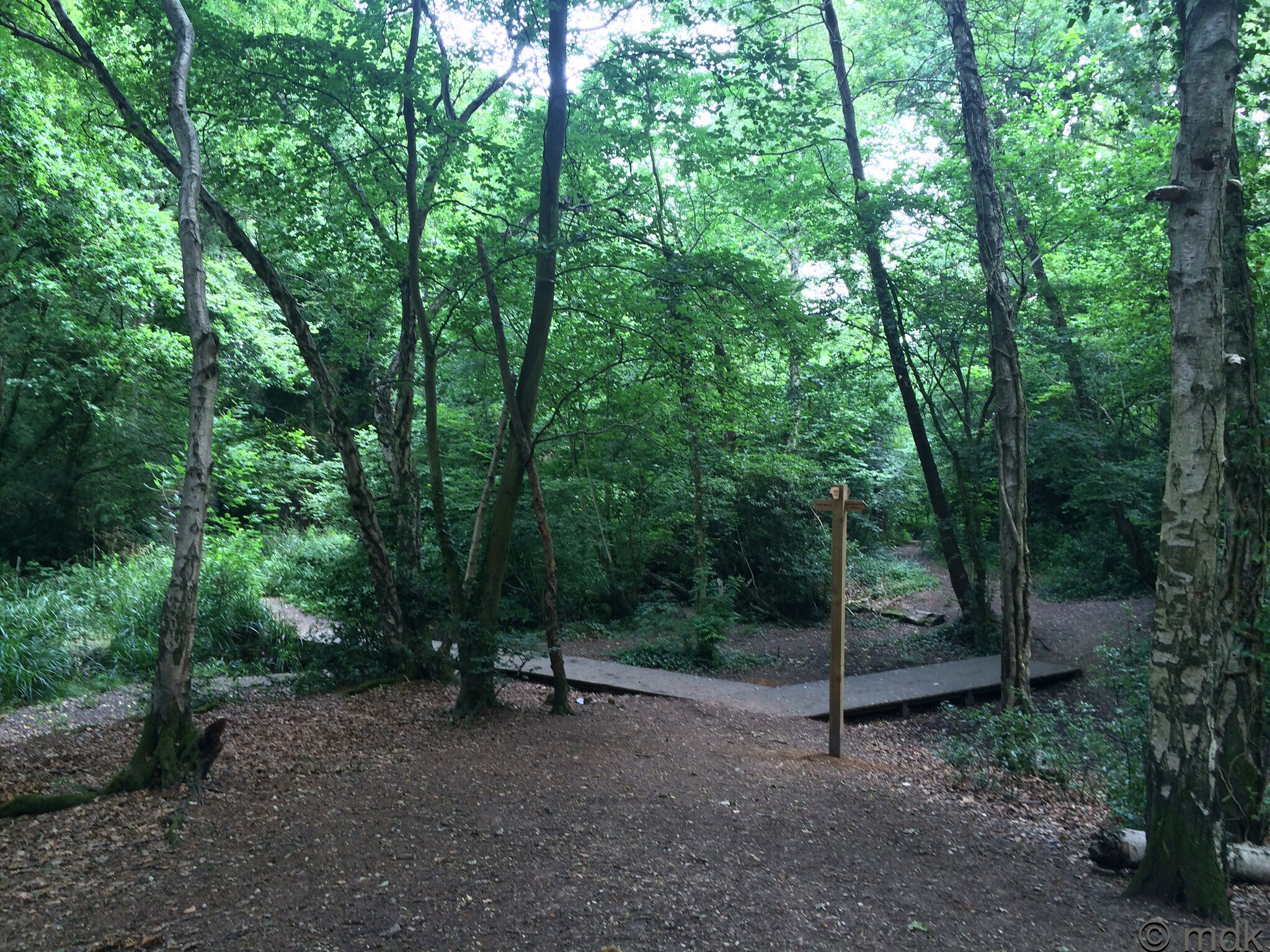 So, off I went. When I emerged from the copse I was a little dismayed to find myself on Old Ivy Lane. This seemed a little odd as I had certainly not followed the Old Ivy Lane trail. Confused, I resorted to WalkJogRun and the satelite maps. This was when I found there was a pine lined trail leading behind the houses back towards Townhill Park. It was a sort of upmarket version of many hidden cutways all over the city, mostly only known to the people living nearby. Finding a new cutway is always a joy because it gives me useful links between places that don’t involve road walking. This one wouldn’t lead me quite where I wanted to go but it was well worth a little extra walking to explore it.

It turned out to be quite a find. From time to time I could see gardens and houses through the trees but it was generally wide and well maintained. The needle covered path was littered here and there with fallen pine cones and I came upon a large clump of toadflax which brightened my day considerably. There was even a hint of sun and blue sky to cheer me up. The big surprise of the day was a large and tattered mushroom, very late in the season. It will probably be a long time before I find another. 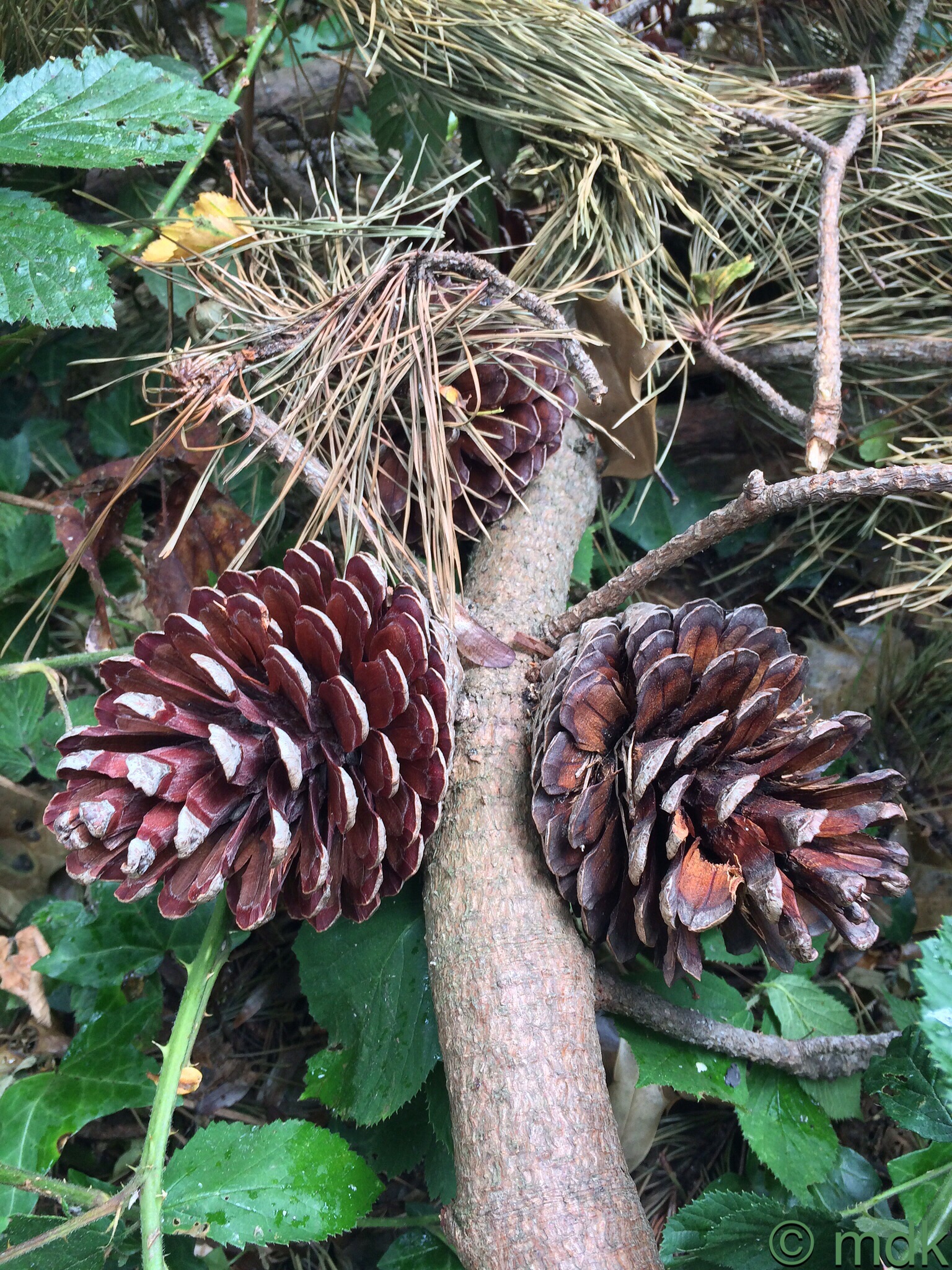 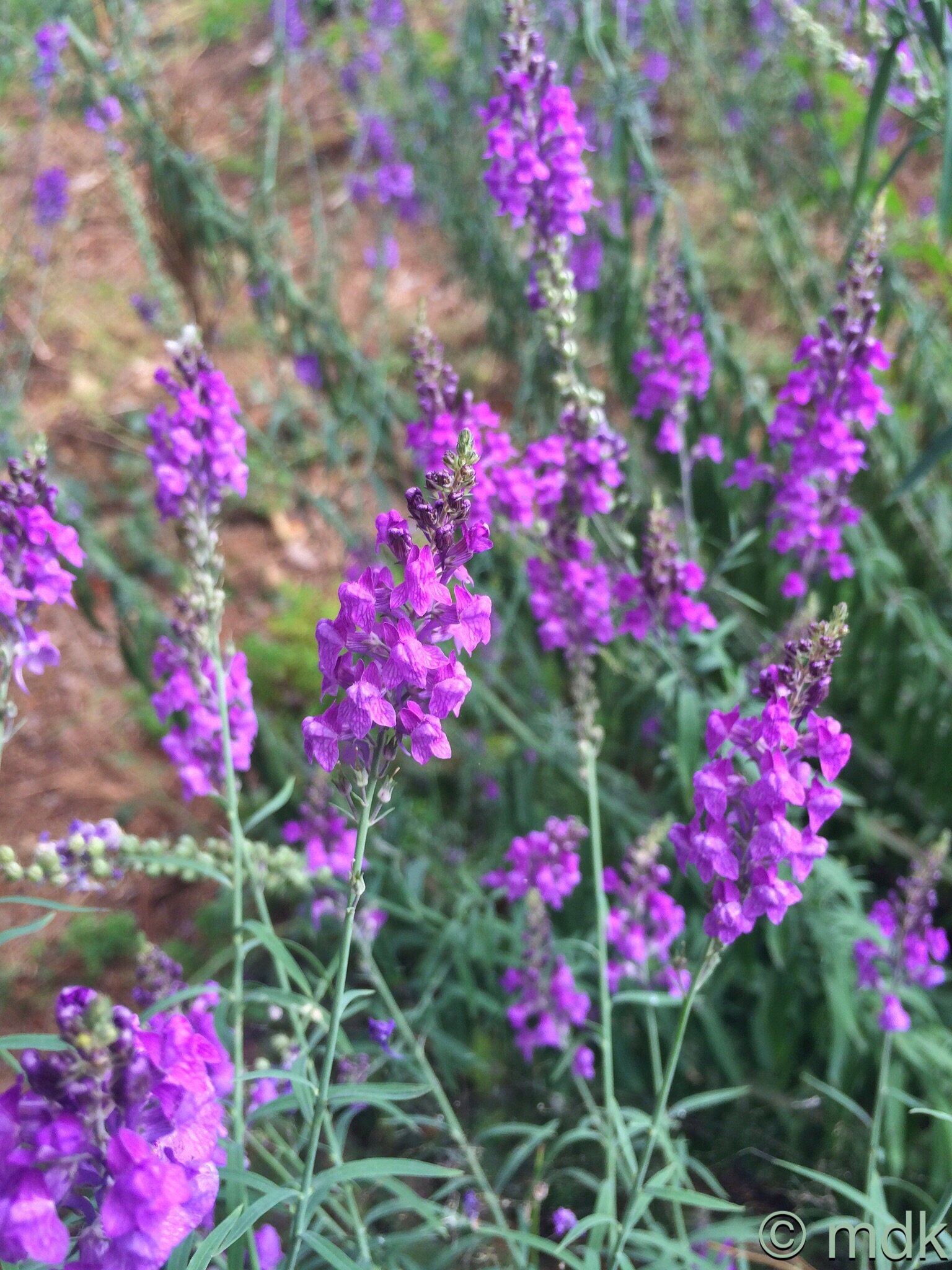 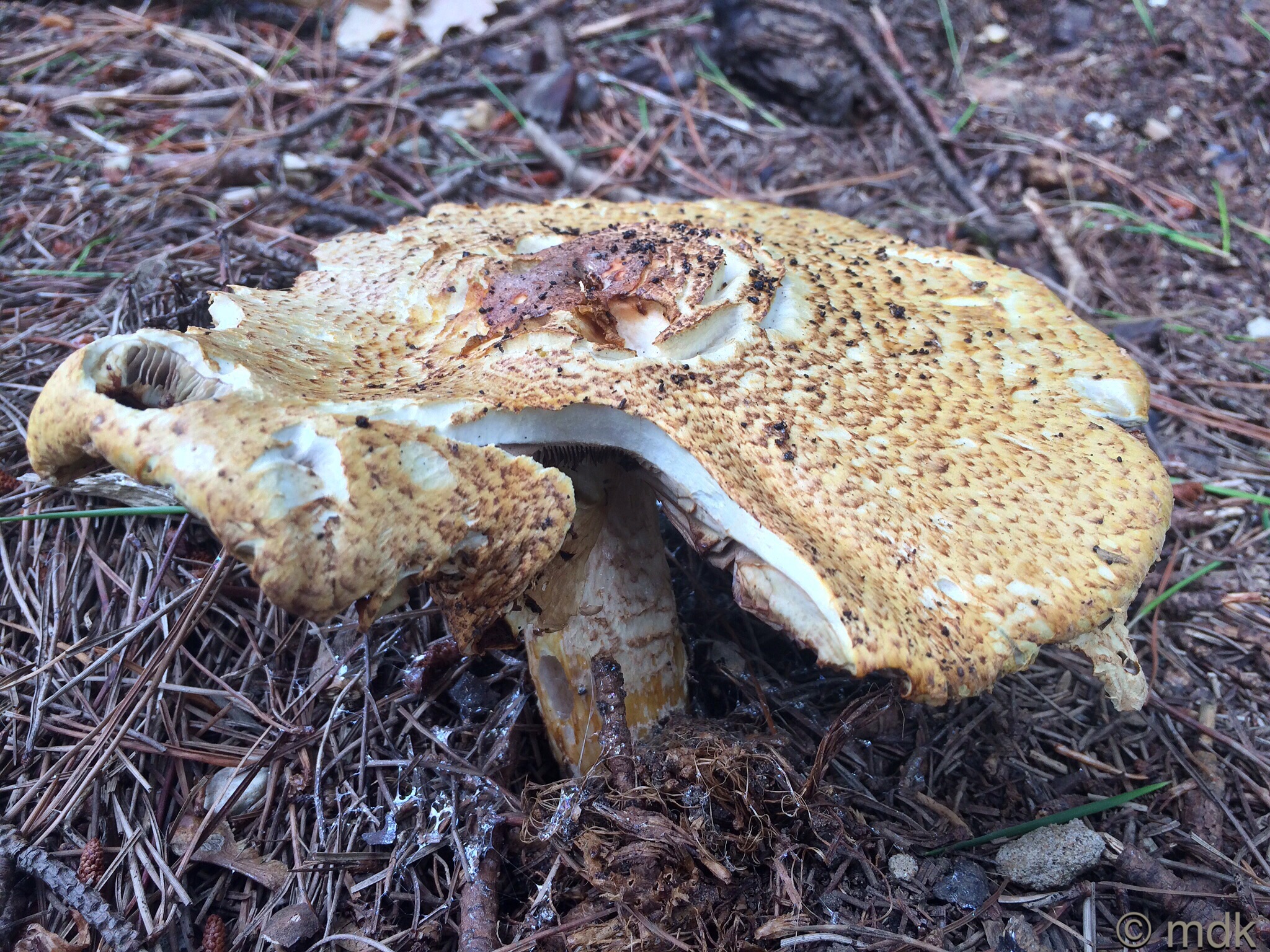 The rain held off for the walk back towards the village but it threatened constantly. I reached the top of the Big Hill in sunshine but the skyscape spread out before me was filled with black clouds. I made it home just as the rain began again.

10 thoughts on “Woods and rain”