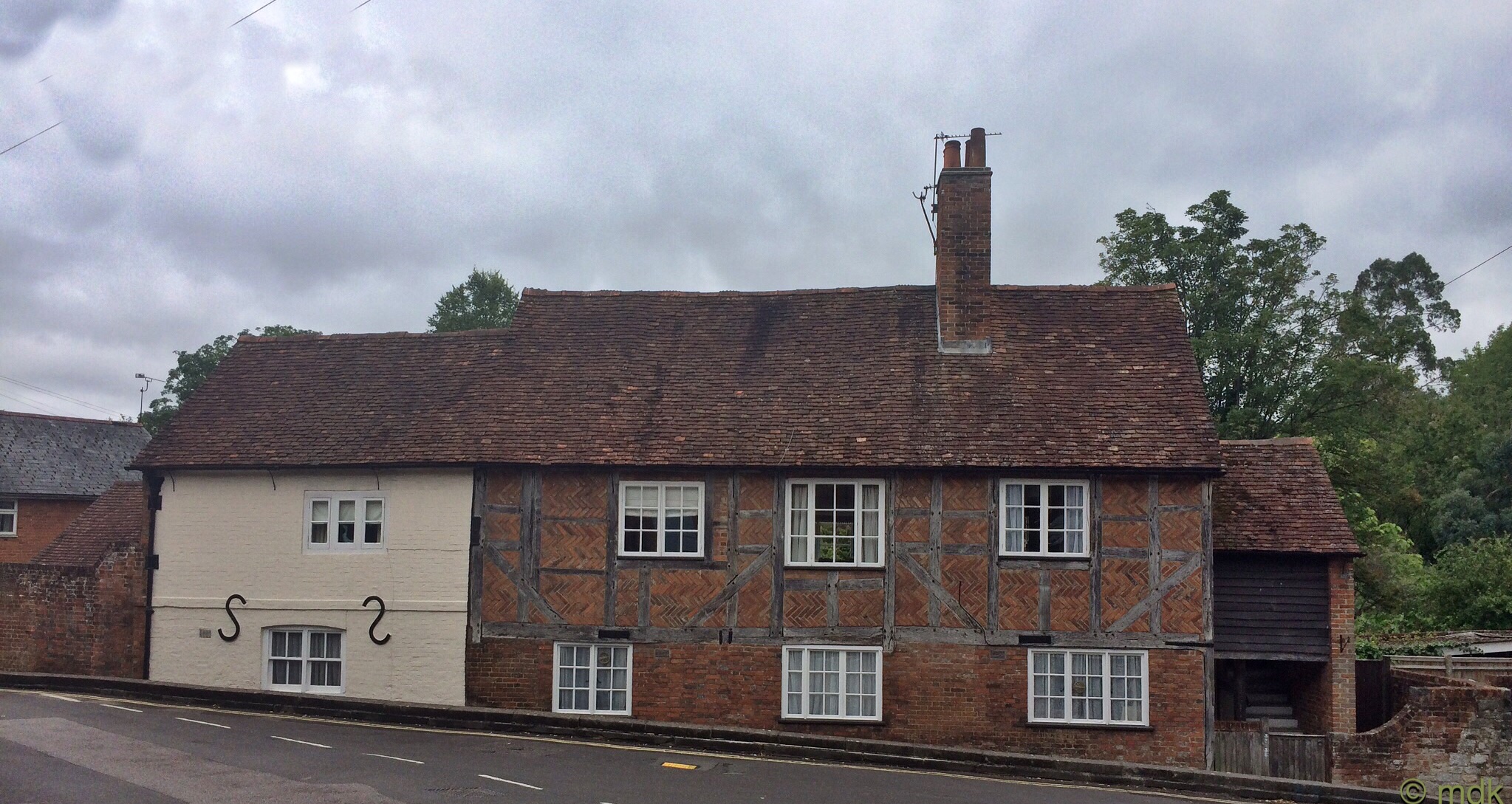 Pretty soon we were back to where we would have been without the castle detour, looking over Blackbridge at the wharf that is the start of the Itchen Navigation. The river still looked very low to me and it wasn’t long before we found out why. I’d been hoping to take CJ over the 1760’s built Wharf Bridge, the oldest bridge on the waterway, and onto the Navigation path as far as Tunbridge. When we walked onto Domum Road the gate to the bridge was barred and a sign told us the river was being dredged. I couldn’t help thinking that dredging equipment was going to make a real mess of an already uneven and at times precarious path. 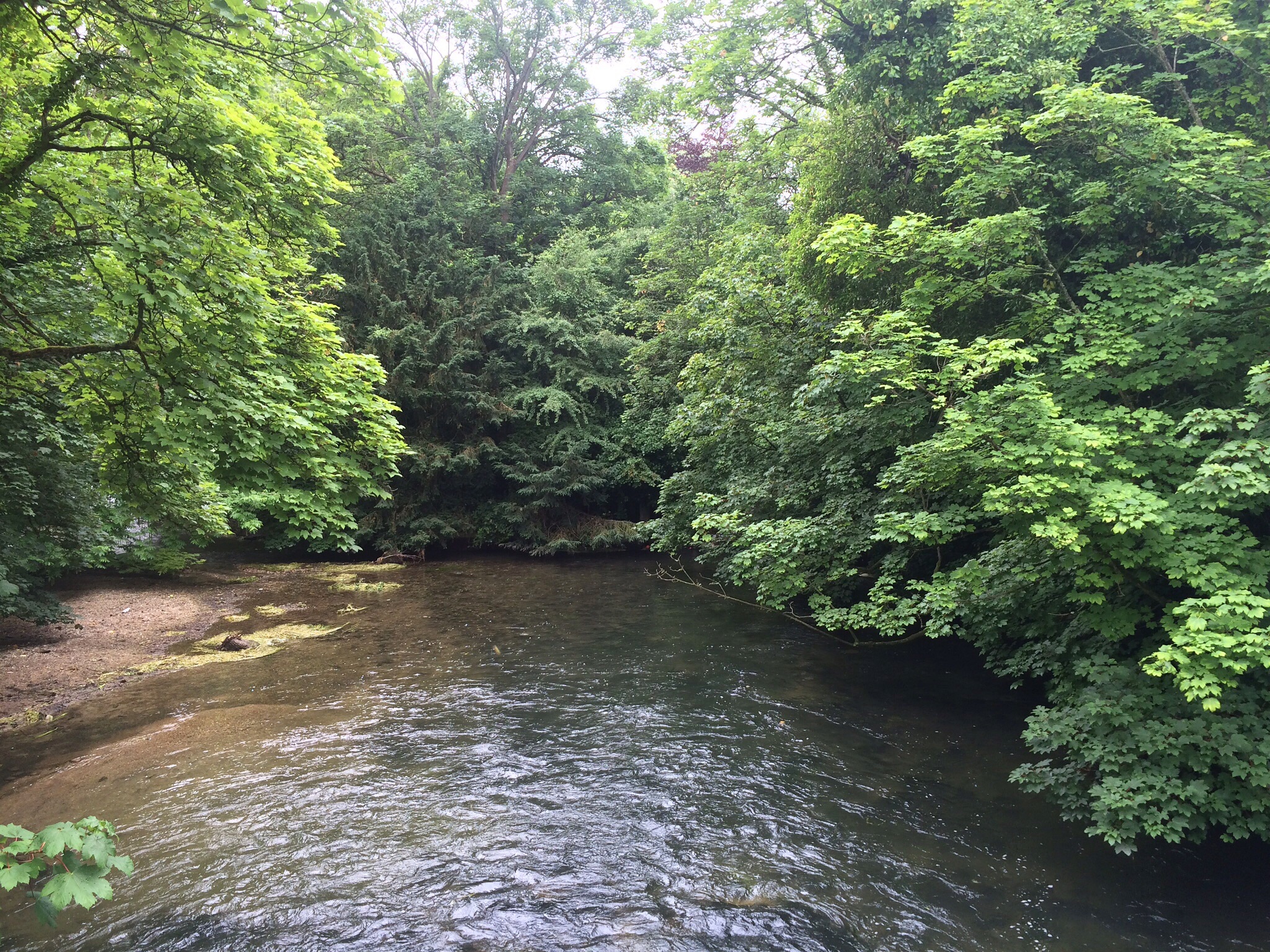 There was no getting round this obstacle so, in the end, we had to walk along Domum Road. In one way this turned out to be a blessing in disguise. Beside the path we saw a strange structure of twigs and leaves. On closer inspection this turned out to be a bug hotel. We couldn’t see any bugs but we both thought the idea was fantastic. About half way along the track we could see a huge yellow digger through the trees, obviously the signs on the gate were not a bluff. 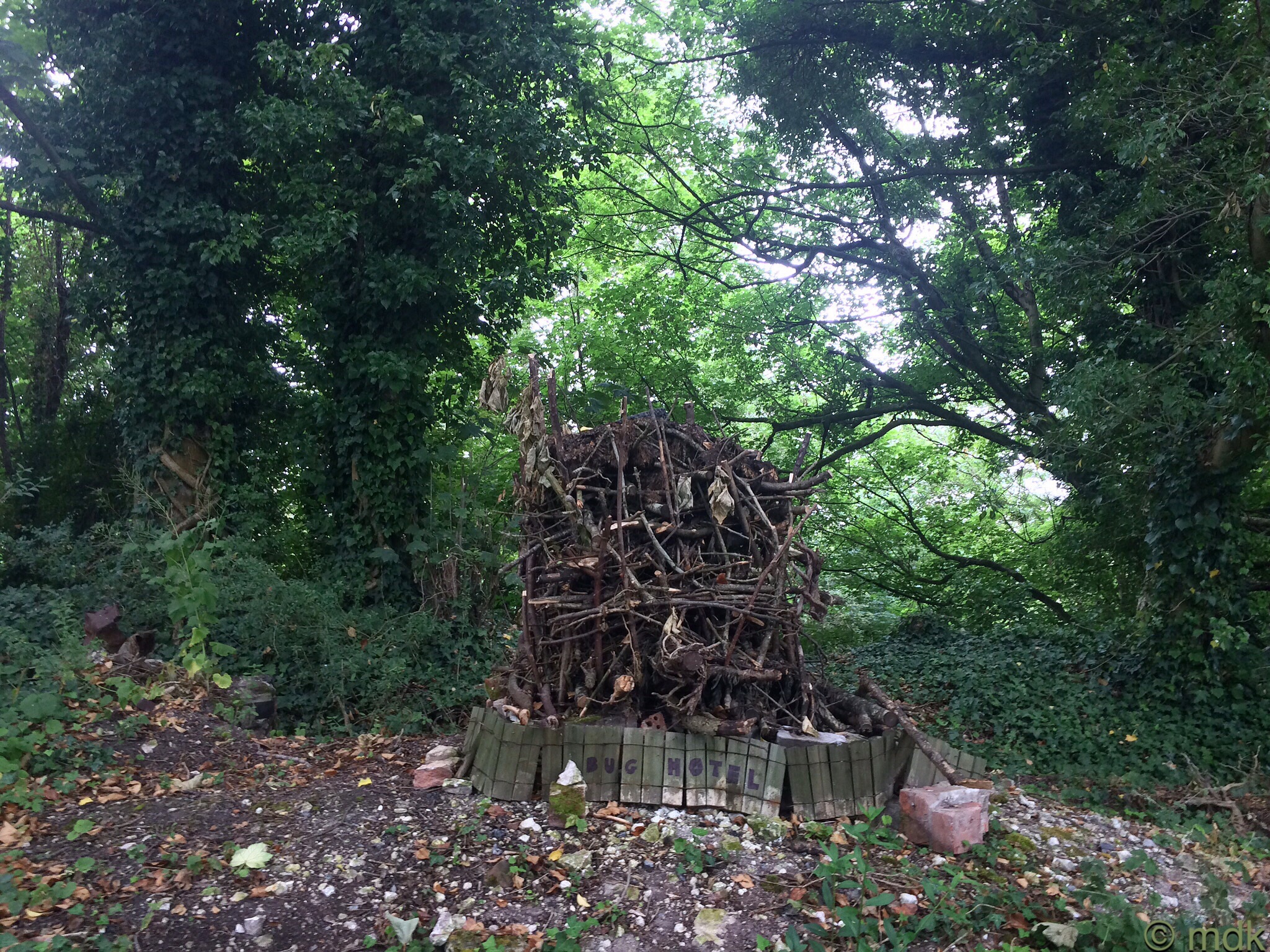 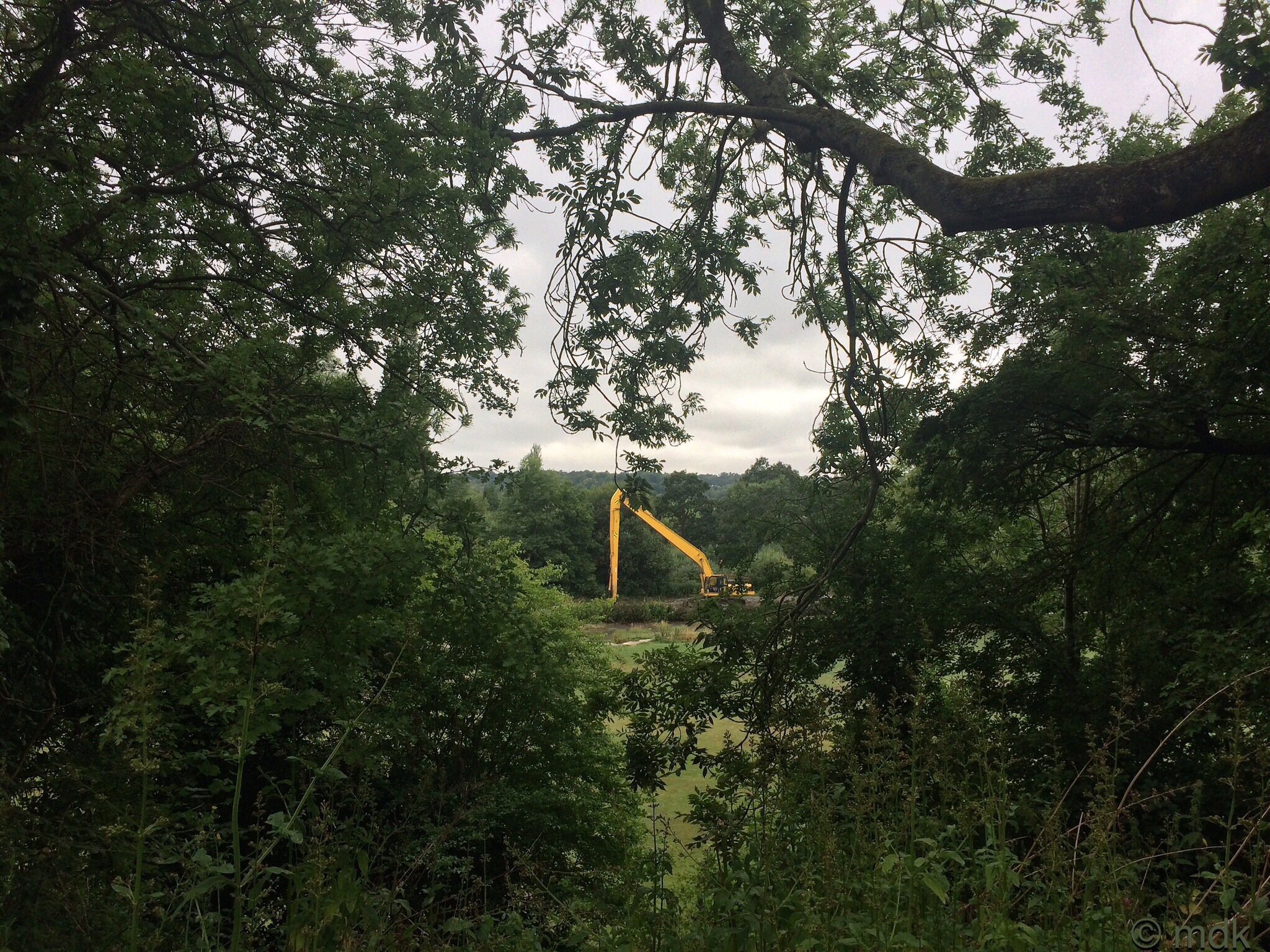 When we got to Garnier Road it was time to step into the unknown. My morning perusal of the maps showed a road that looked as if it led to the structures I’d seen on the east side of St Catherine’s Hill. On the map they were marked as plague pits although I knew the Plague Pits Valley passed the hill to the south. It all looked simple on paper. We walked on the verge up The Bull Drove and found the lane quite easily. After that things went pear shaped. There were tatty looking carvans and a mass of rubbish close to the start of the lane. It looked like a traveller camp. CJ and I walked past nervously, expecting a traveller or at least a dog to come out at any moment. 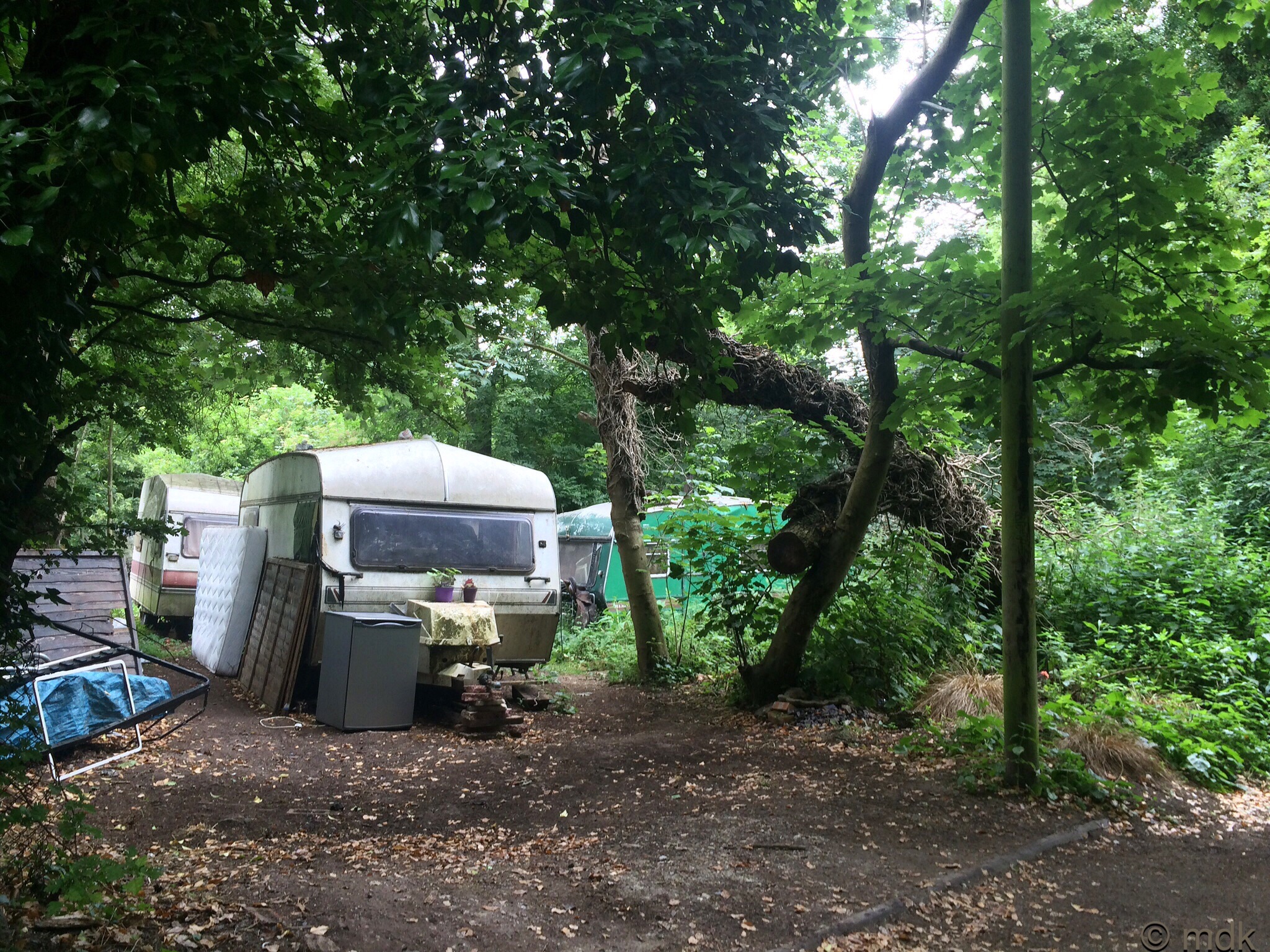 We carried on up the lane to the place it turned off towards the plague pits, if that’s what they were. Here we were met by a huge, padlocked gate. Unable to go forward and unwilling to go back we found a narrow lane, almost hidden by brambles and wildflowers. It was hard going but eventually we came out on the grass at the foot of St Catherine’s Hill in Plague Pits Valley. There were signs warning of sheep grazing but neither of us was too worried about a few sheep, cows might have been a different story. 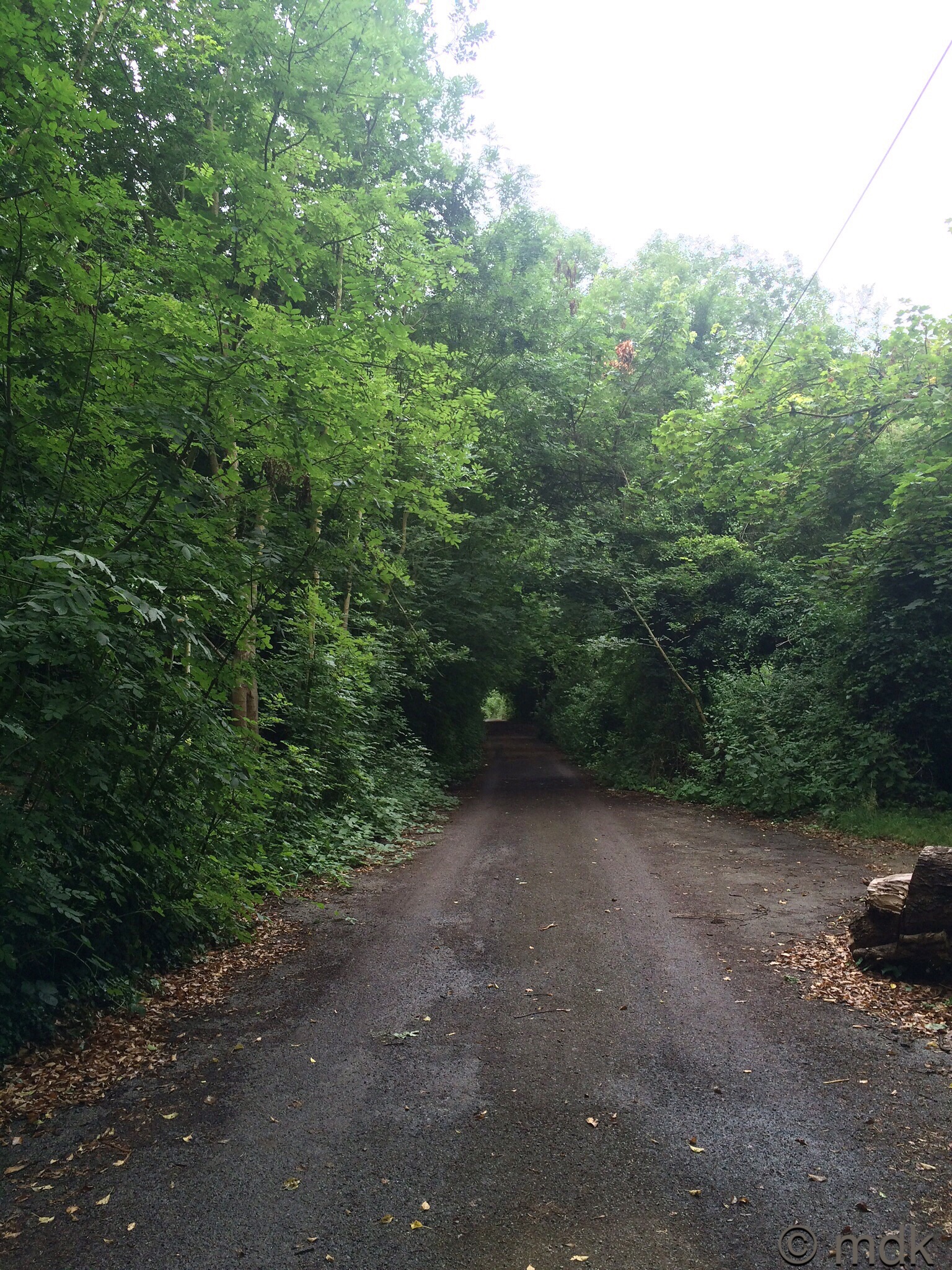 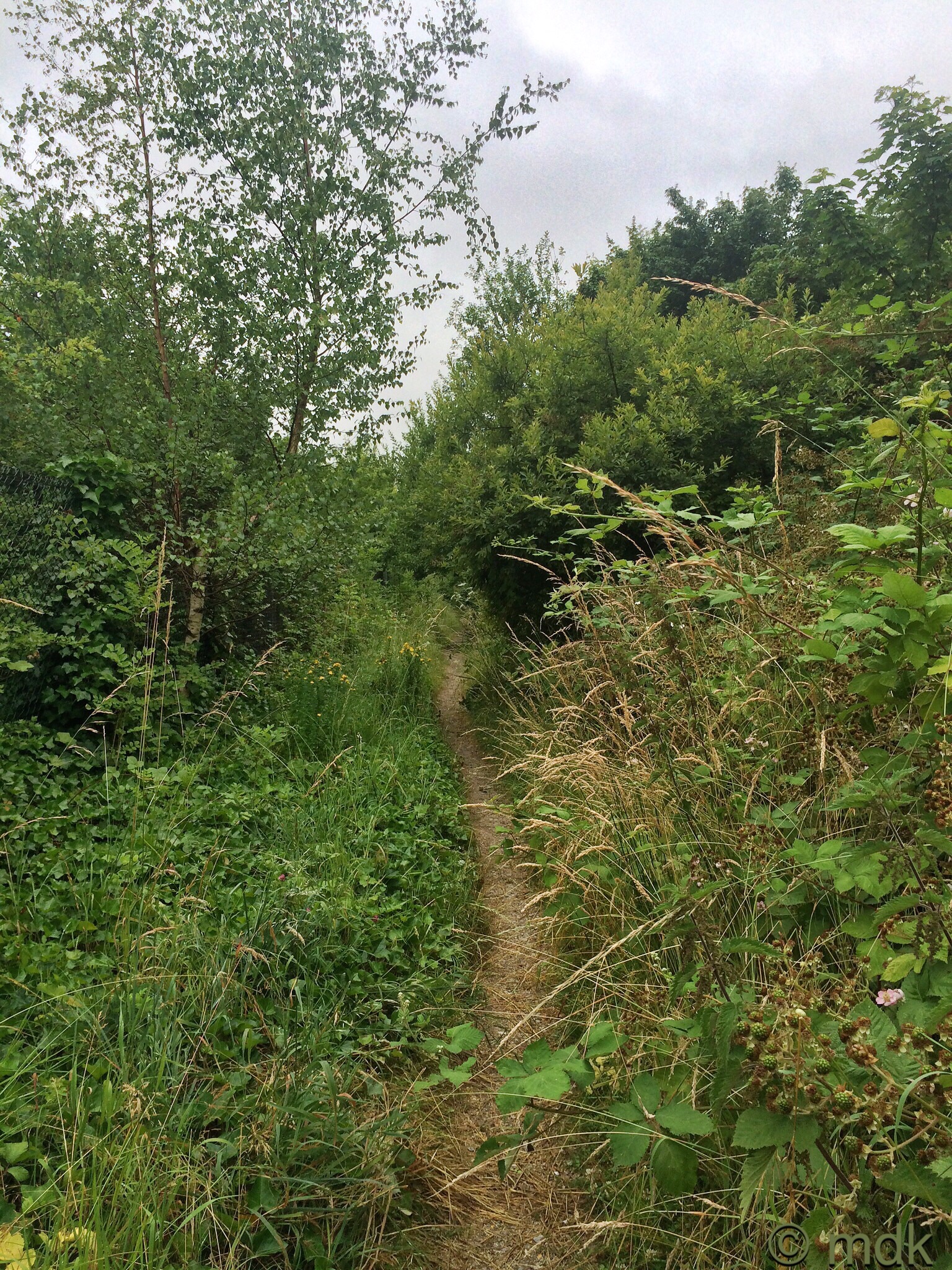 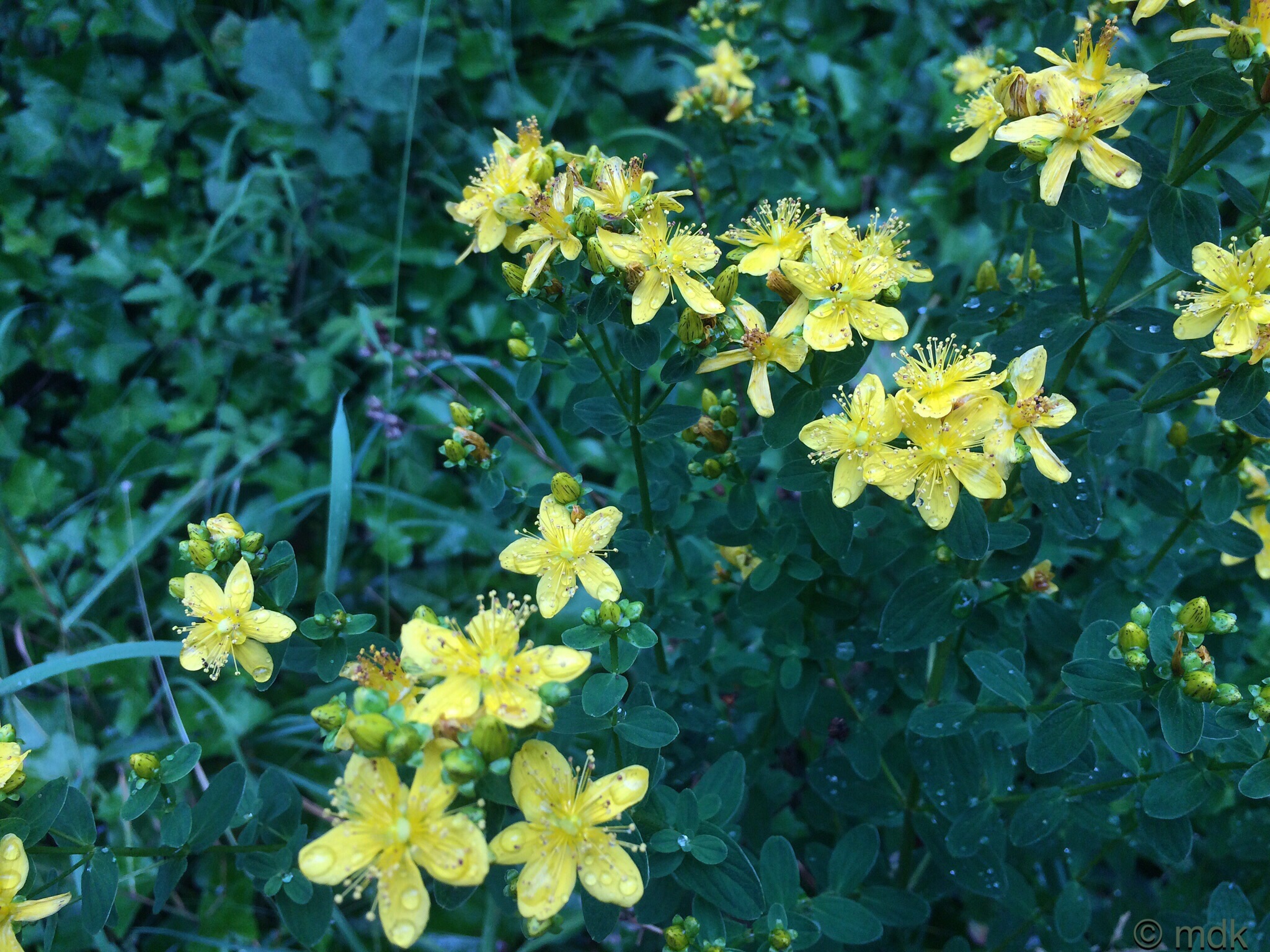 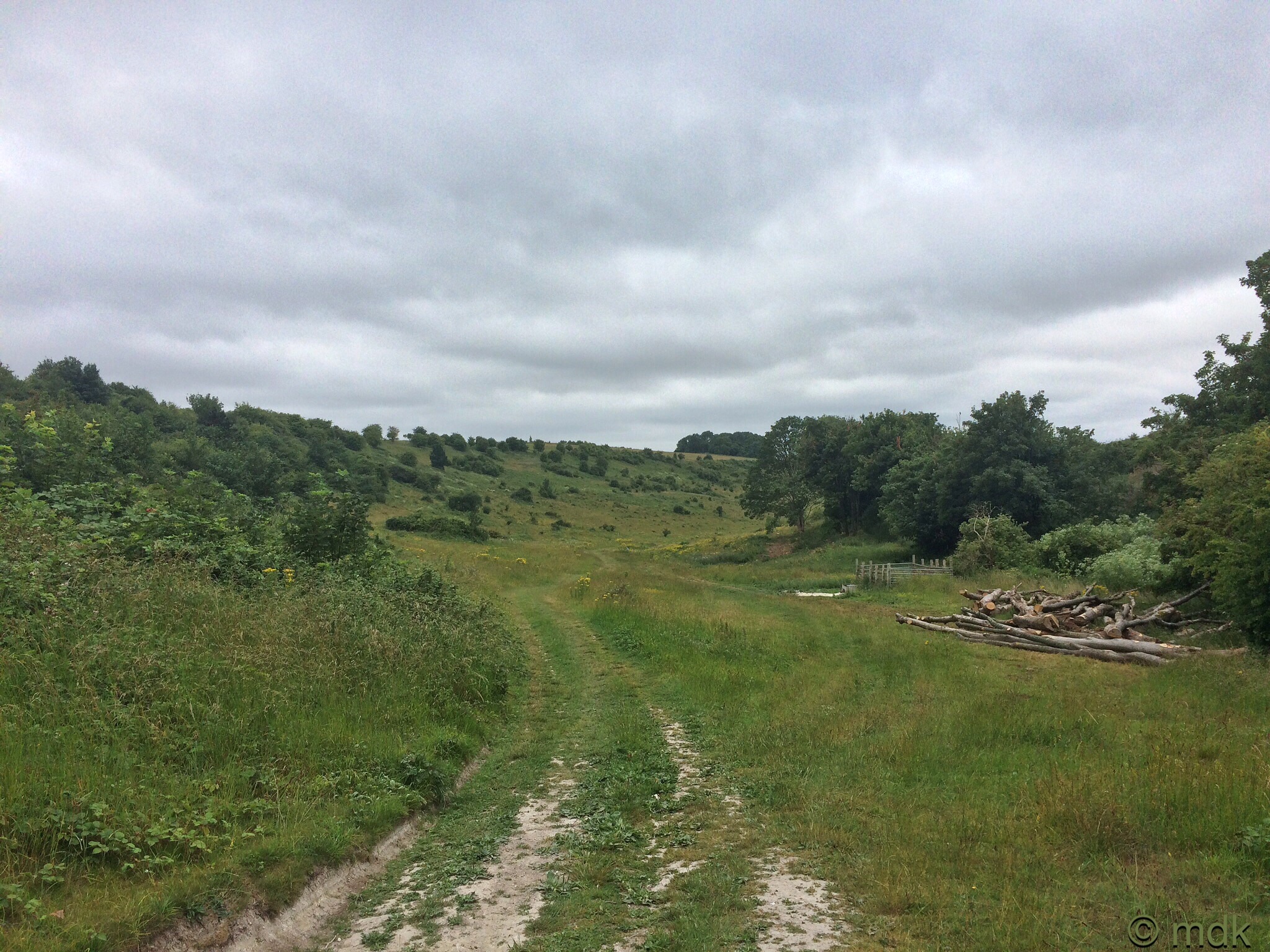 The Black Plague came to Hampshire in October 1348. The first deaths were in Titchfield and the disease probably arrived on a ship. Enevitably the plague spread across the county and reached Winchester. There was an outcry when Bishop Edington began burying plague victims in the cathedral cemetery and when he suggested extending the cemetery into the square, where locals held their market, anger grew. Eventually the bishop had to concede defeat, probably because of the sheer scale of the disease and the number of deaths. Cemeteries had to be prepared on unconsecrated ground. In the end pits were dug at the base of St Catherine’s Hill and the dead hastily thrown in one on top of the other.

Despite the sign, there were no sheep anywhere to be seen. Walking through the peaceful grassy valley it was hard to believe so many dead lay under the ground around us. There was no sign, no monument, nothing at all to show that it had even happened. It seemed to me that anything there was to see would be behind the trees to our right where I’d seen the earthworks on the map. If we couldn’t get through the gate we thought we might be able to climb a little way up the hill and come down to it from the other direction. There was a trail of sorts but it was winding and steep. CJ picked up a branch to use as a walking stick. It wasn’t long before I wished I’d done the same. 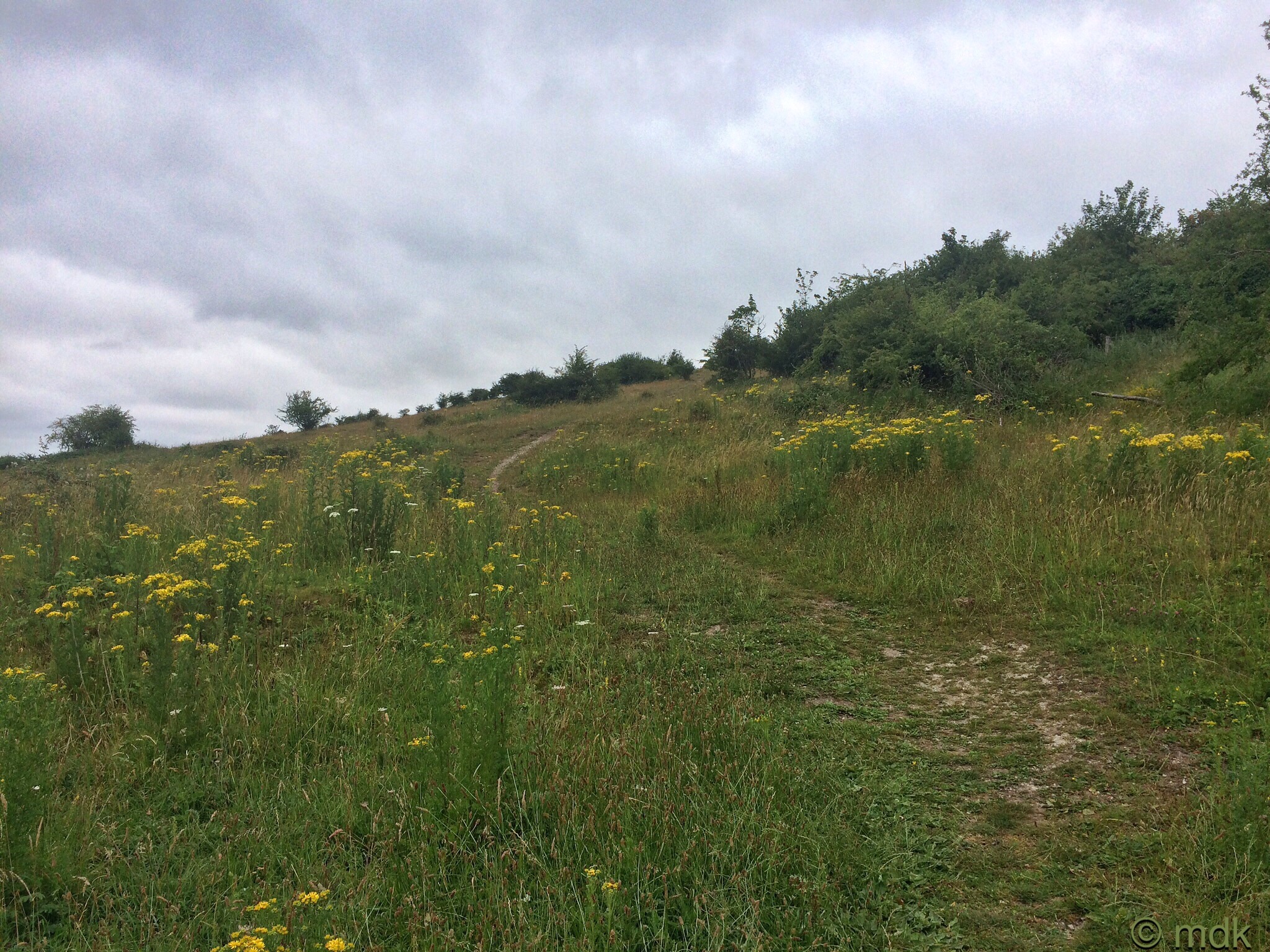 We climbed to the level of the first earthwork ring of the hill fort but then found ourselves in thick trees. Here we lost the trail and a quick look at the map showed we were getting further away rather than closer. It might be possible to get through from the other side but that would mean climbing to the top of the hill and back down, if we could find a trail, or going right round and trying to find a clockwise path. The only alternative was to go back the way we’d come and see if there was a path or trail we’d missed when we came to the gate. We decided to go back, it seemed the sensible option.
“If we can’t get through we’ll call it a day,” I told CJ. “After all there might not really be anything to see anyway, just because you can see something from the air doesn’t mean you can see it on the ground.”
“We can always try again another day Mum,” CJ said, “maybe from the other side.”

We looked and looked but all we saw was the gate and no way round it. CJ shook it a bit in the hope that it would open but it didn’t. In the end we conceded defeat and walked back through Plague Pits Valley.  There were still no sheep but, as a consolation for this and the locked gate, we saw rabbits hopping about the hill showing us their white cotton tails. CJ tried to take photos but they were too far away.
“How about we take a little detour to the viaduct,” I said, “seeing as we’re nearly there?”
CJ thought this was a great idea so, when we left the gate at the other side of Plague Pits Valley we turned left instead of right and headed towards Hockley.