Friday’s severe weather warnings came to nothing but steady, all day rain. Mostly I stayed indoors, catching up on housework. On a dash to the bins I passed the new waterbut and could hear water trickling in. On the way to the shops in the afternoon, the trickling had stopped. Lifting the lid I saw water to the brim. It had been empty the day before.

By Saturday morning the rain had stopped, according to the weather forecast this was going to be the best day of the weekend. Time for a walk then. As complete dryness wasn’t guaranteed I didn’t want to stray too far so I decided on the water meadows. Perhaps there’d be wildflowers. As I left I noticed the osteospermum I thought a casualty of the humidity had recovered and was full of flowers, each petal, pink fading to white and pinched in the centre making a wavy edged delight. The bees were buzzing madly around the nearby lavender. One fat bumble bee hugged a flower, nuzzling at the petals as if the scent had sent him to sleep. 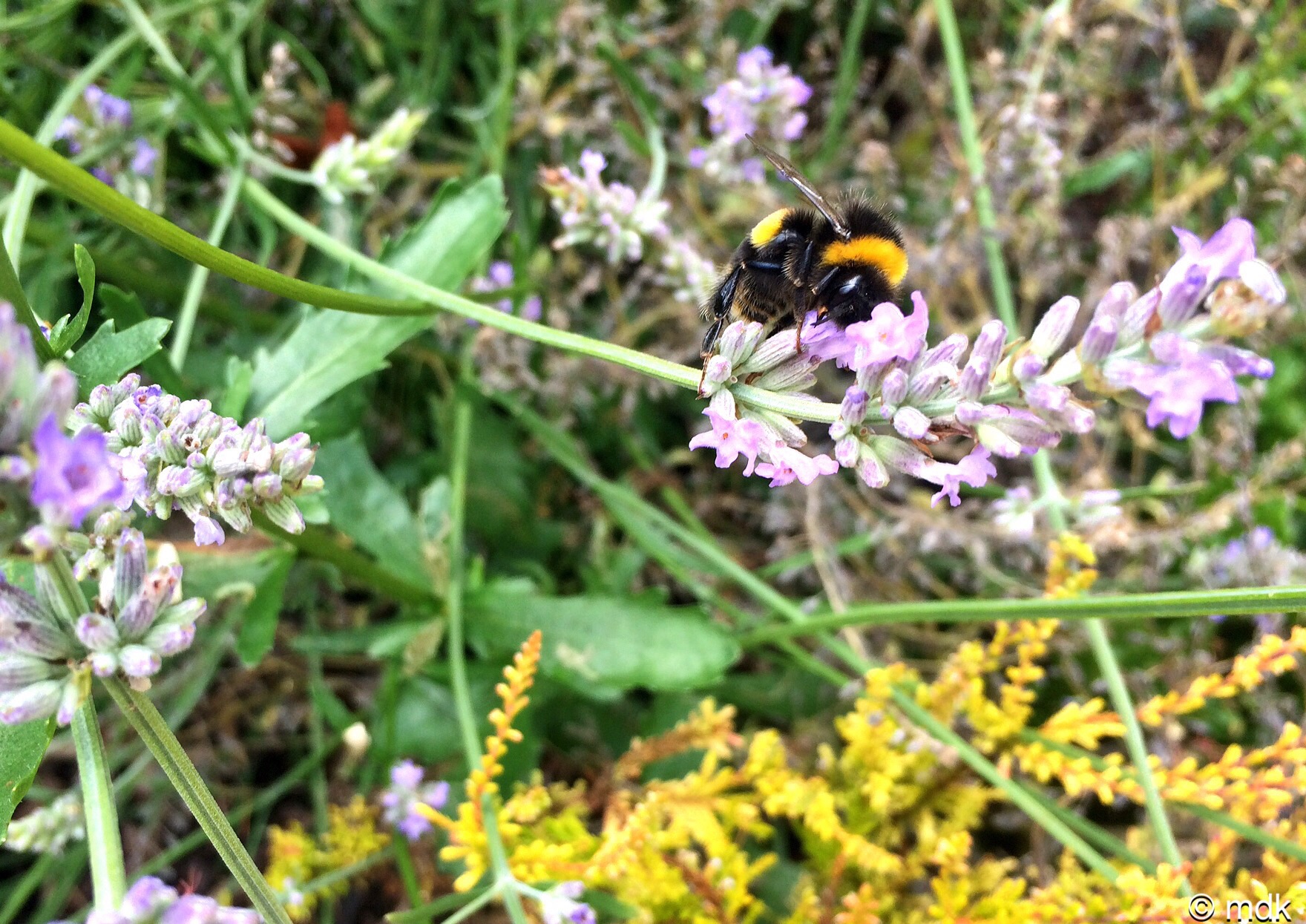 Two black swans were down at the jetty being fed by a large and excited family. The great willowherb were out along the riverbank, clouds of bright pink soon to be clouds of silky seed heads. A mother duck proudly guided two fluffy ducklings upstream proving that some chicks have hatched on this part of the river even if I’m yet to see a cygnet here. 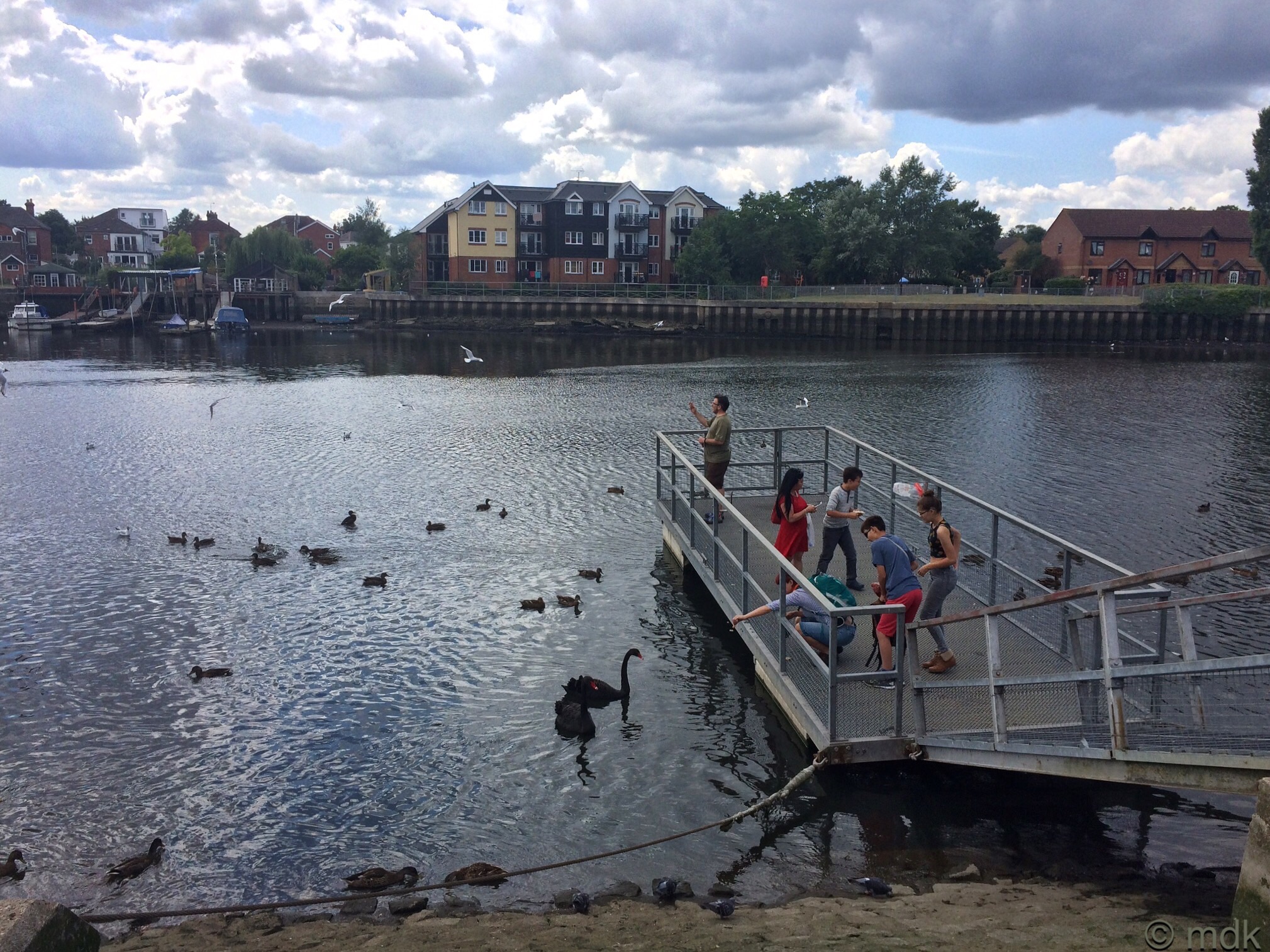 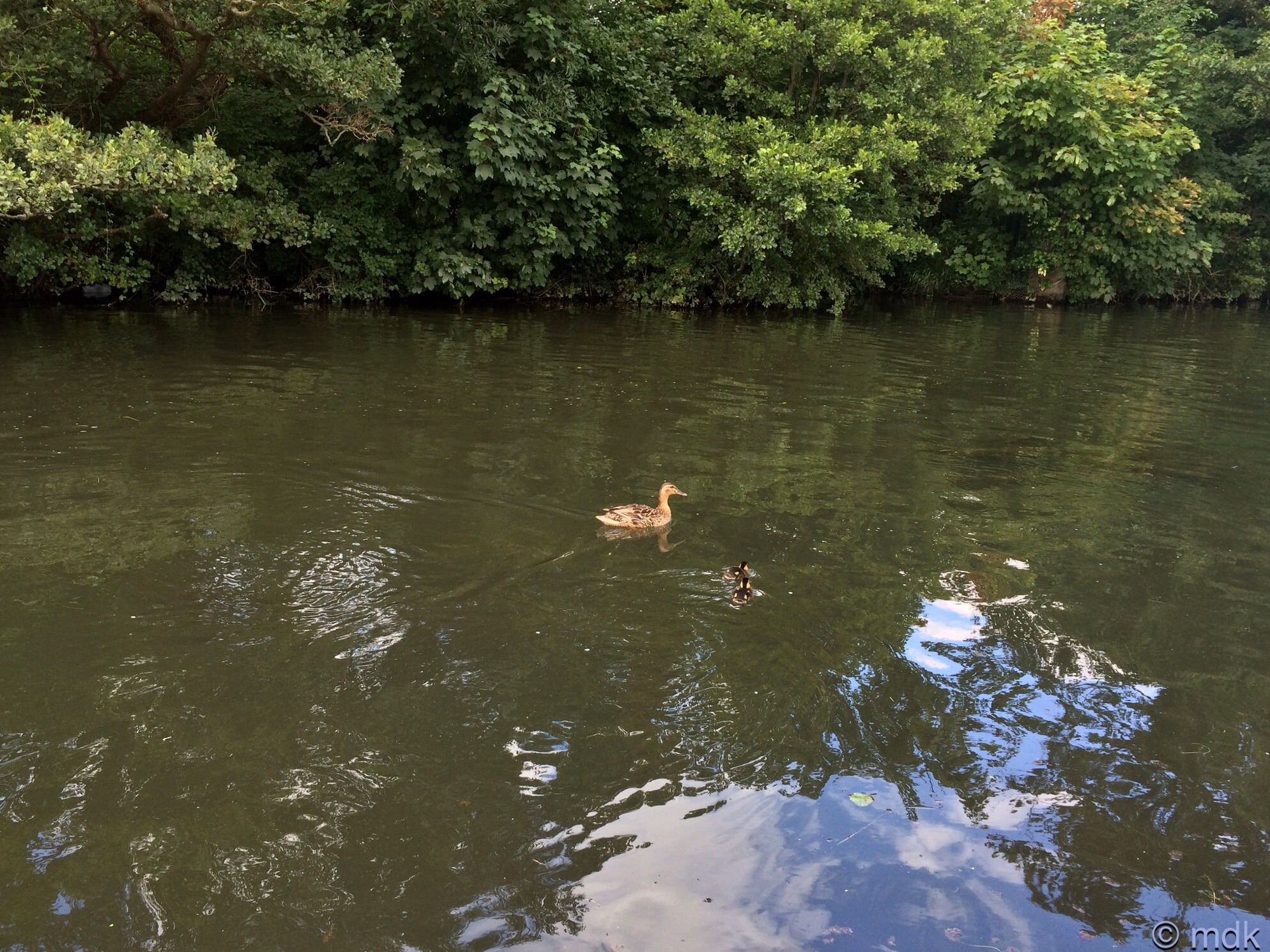 Further on, a man stood on the edges of a small RIB punting down the river. It looked precarious and I waited for the splash as he fell but it never came. Why he was standing I don’t know but I’m pretty sure he didn’t go under Mansbridge.  More conventional rowers were just going through as I approached. The river seemed full of traffic. 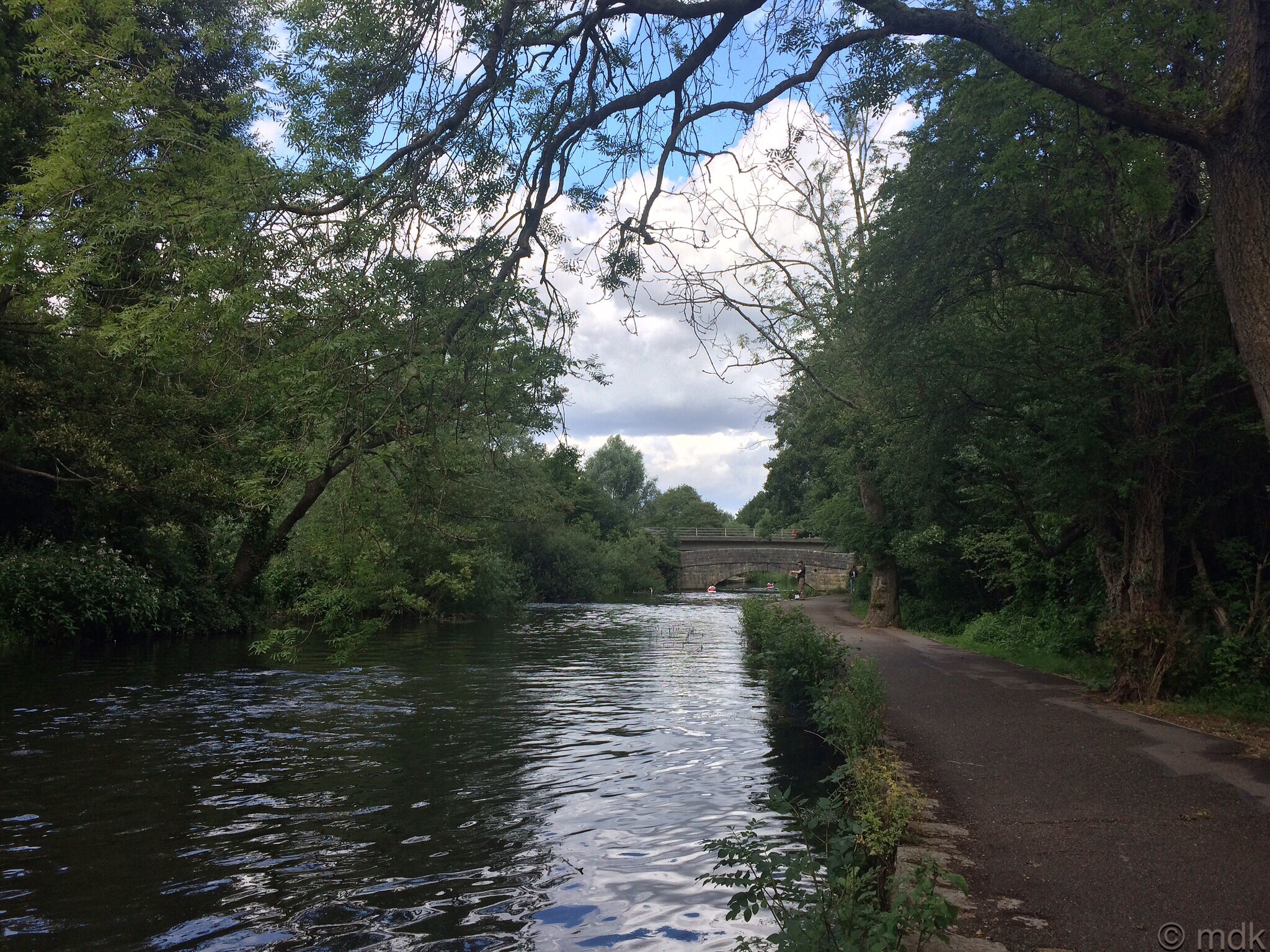 Mansbridge Lock was crowded with walkers so I took the first gate to the water meadows. There was a mass of long untidy grass where I’d hoped to see wildflowers. Worse still, cows were grazing just beyond the next gate. Cows en mass are not a walker’s friend and I was nervous about them being so close to the gate. 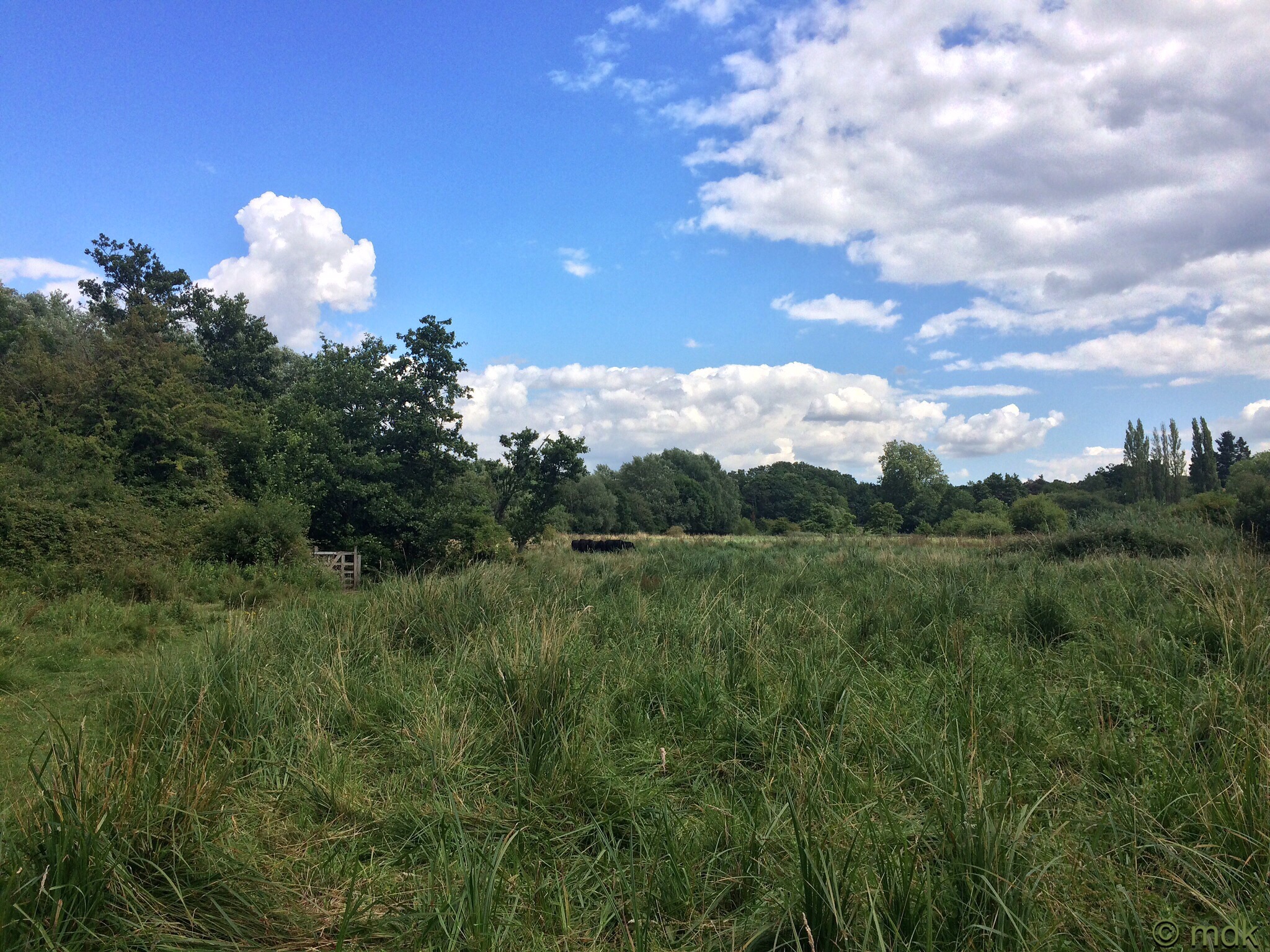 I felt like turning back but gave myself a talking to and pressed on trying to be quiet so the cows didn’t notice me. At least here there were wildflowers, Queen Anne’s lace, sunny yellow fleabane and knapweed. There were also lots of tiny red soldier beetles, almost every flower had one perched on top. This is their preferred position to hunt smaller insects. Their larve live in the soil eating slugs and snails so they’re a welcome visitor for gardeners. For a moment I thought about catching a few and taking them home. 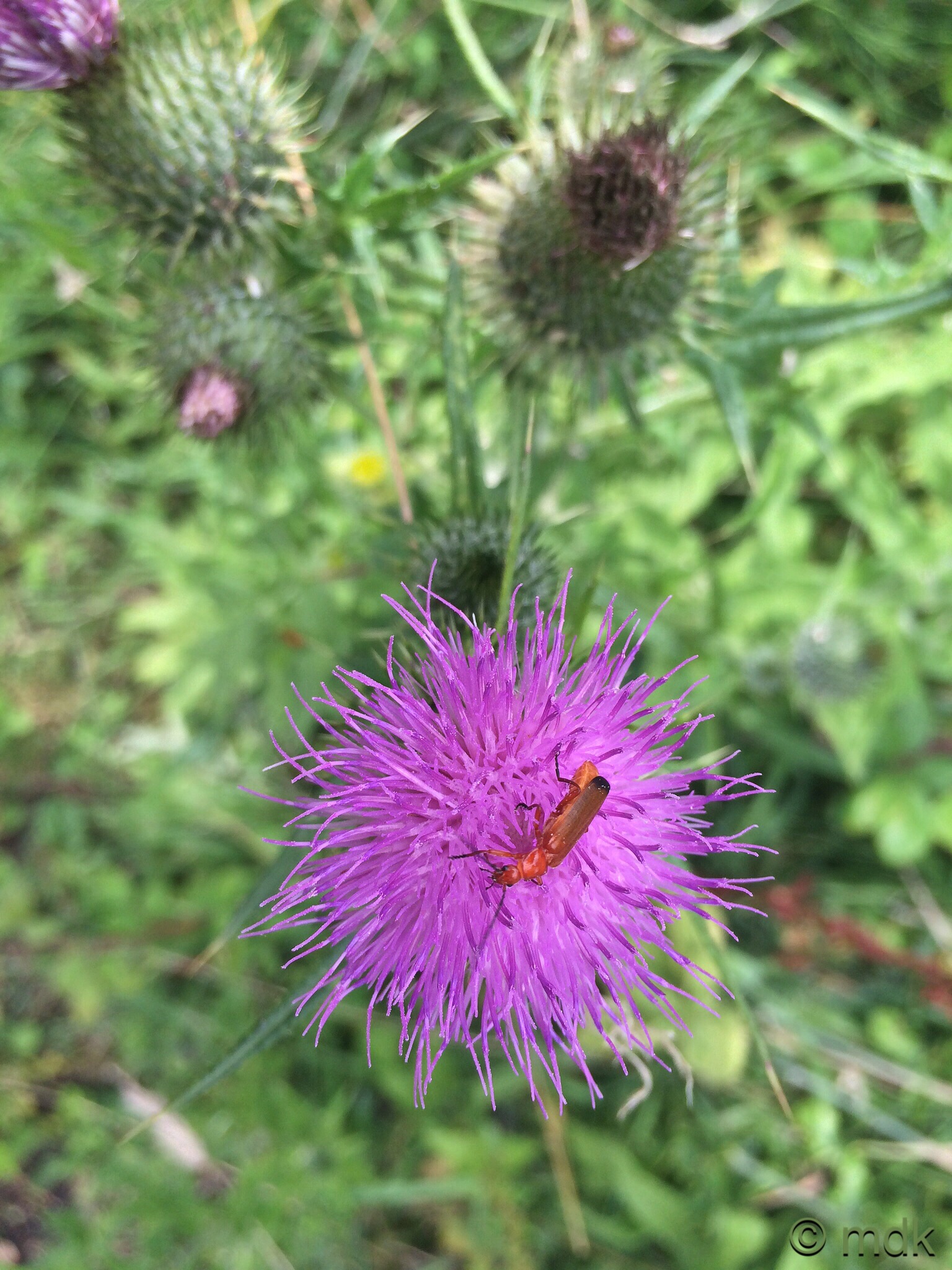 The gate was creaky. The boards of the bridge rattled and groaned as I crossed. So much for sneaking quietly past the cows. Through the second, even creakier gate, I stopped, waiting for the charge. The cows were just a couple of metres away but most had their backs to me. One white face looked up and briefly eyed me but soon went back to eating grass. Hurriedly I marched through the grass putting as much distance between us as possible. In the distance I could see cars zooming along the road in front of the White Swan. If there’d been no cows I might have strolled across the meadow to the river. 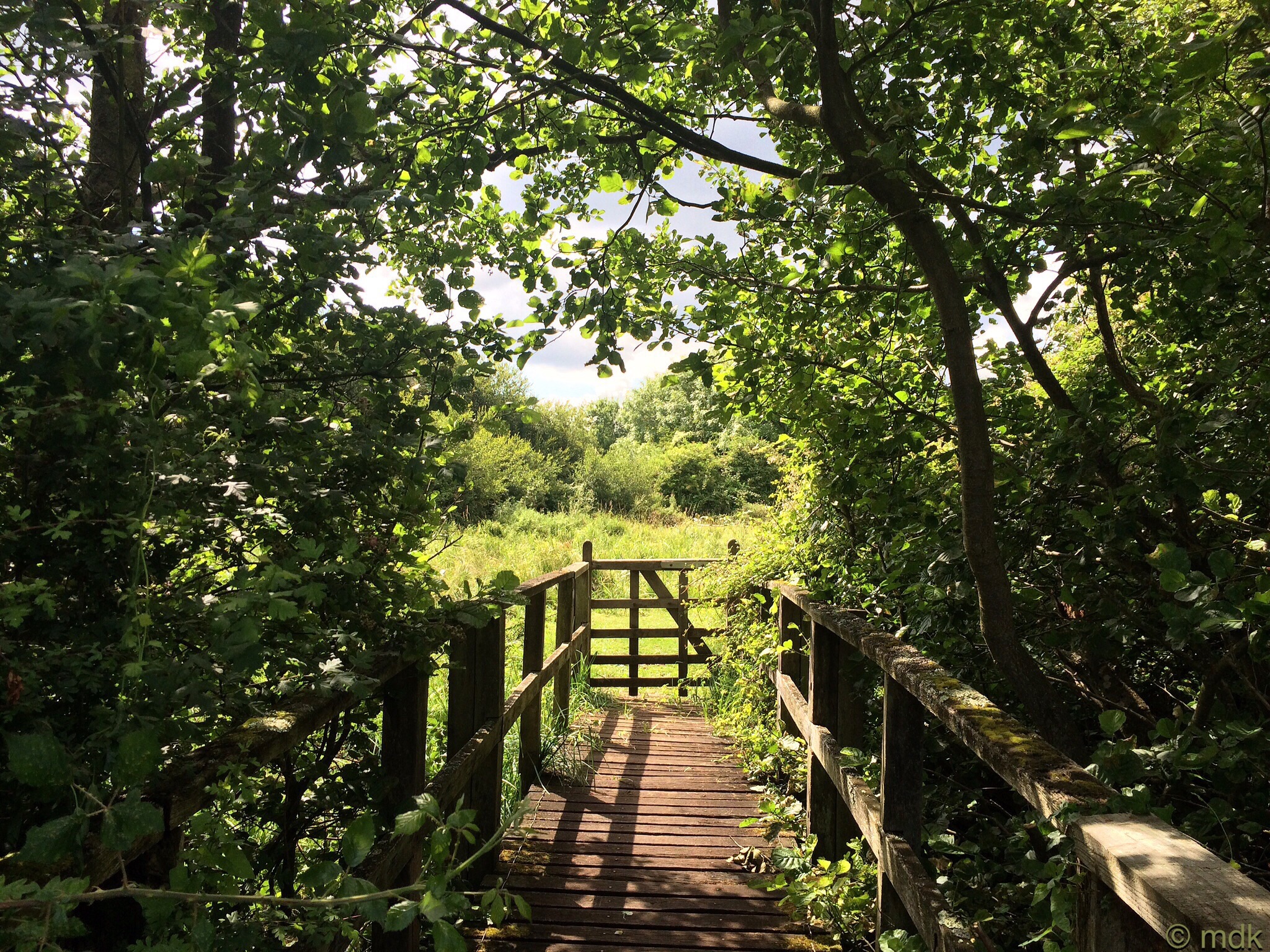 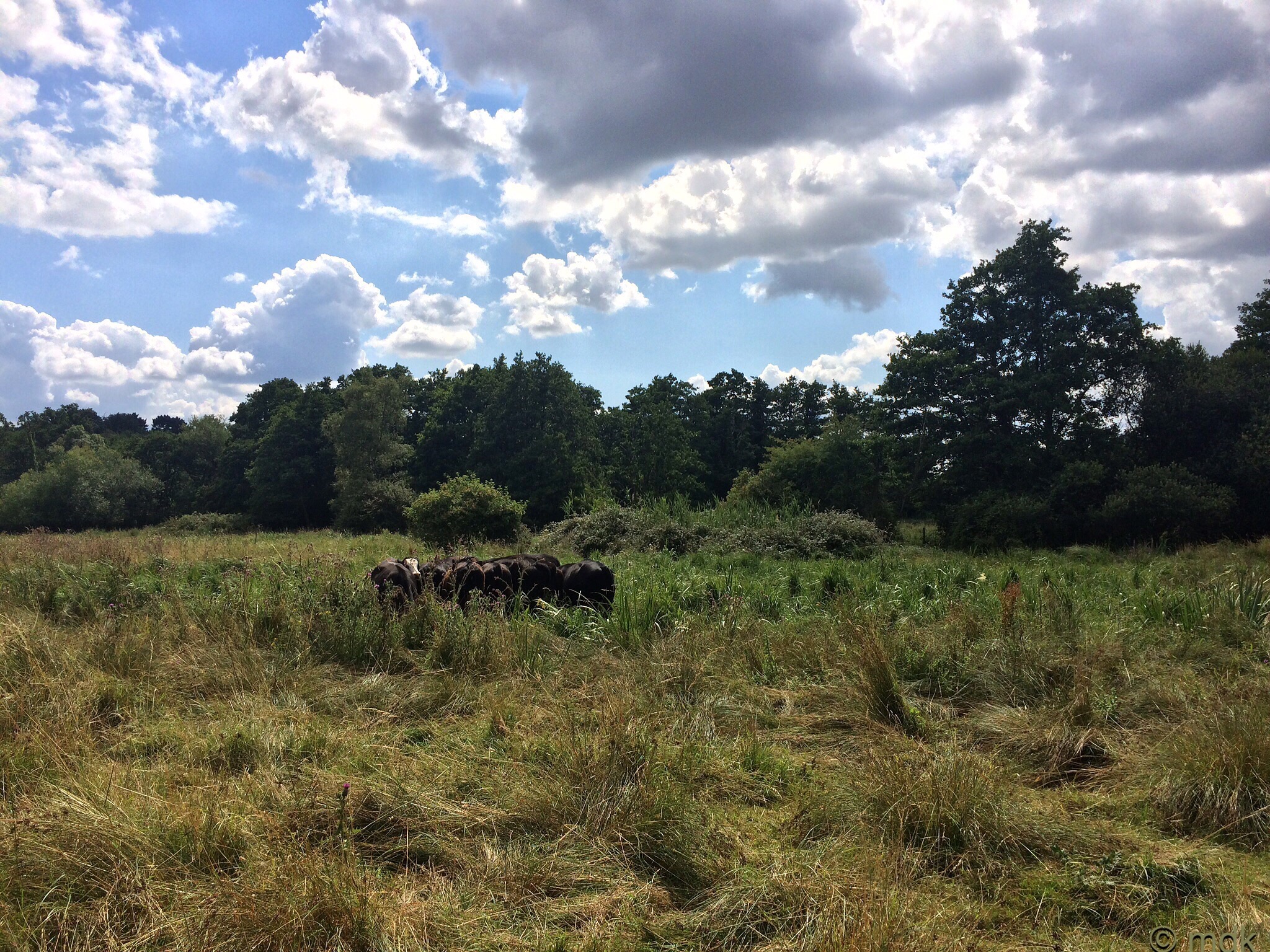 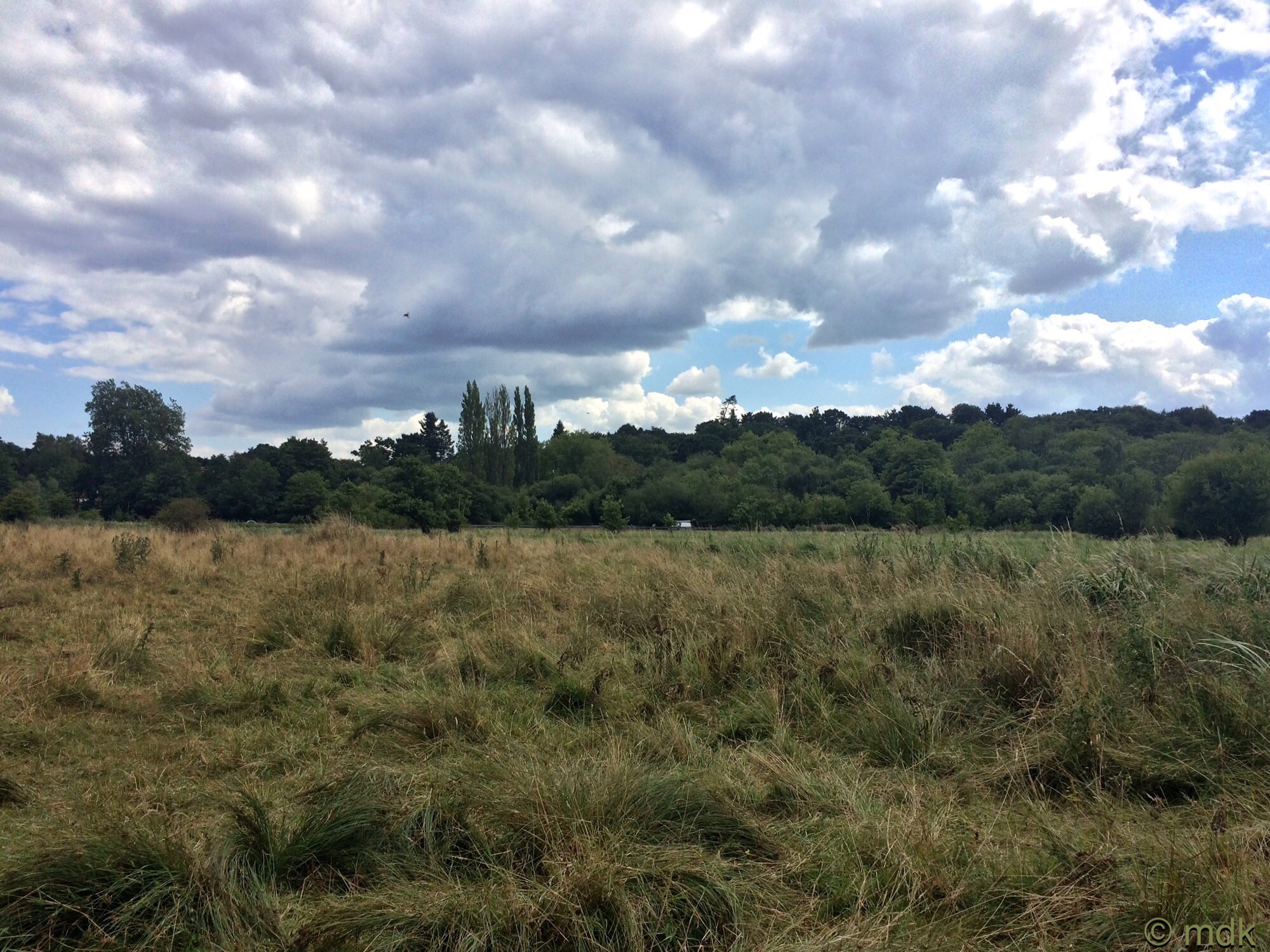 When I reached the gap in the hedge I breathed a sigh of relief. There’s no gate, just a rickety fence and a tunnel to the next field made uneven by gnarled roots. It felt like sanctuary all the same, although I wondered if a cow would fit through the gap. In the past I’m pretty sure I’ve seen them in that meadow from the safety of the fenced off Navigation trail. 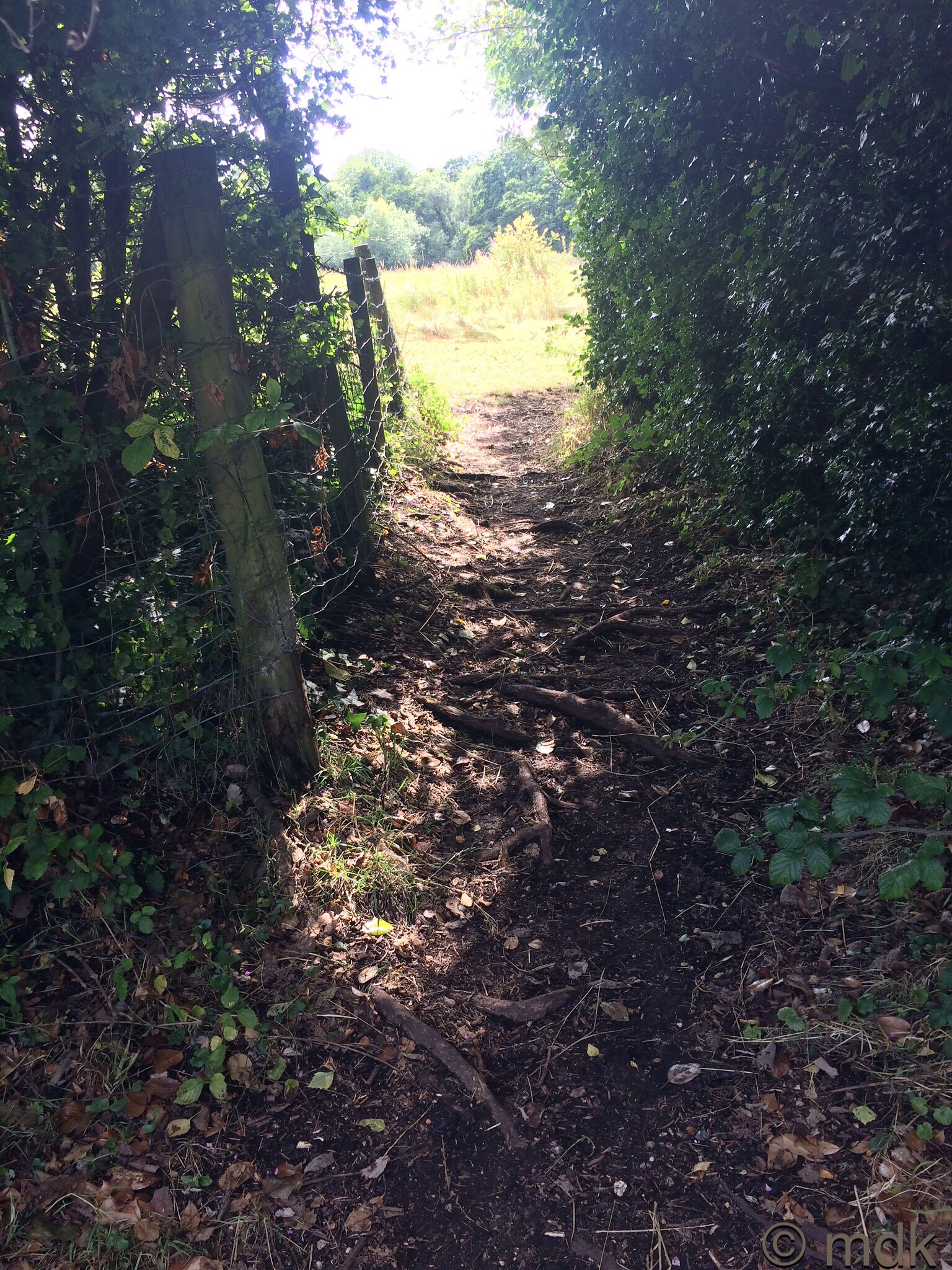 The second meadow seemed bereft of wildflowers too, although I didn’t hang around to really look. Still convinced the cows would follow me I hurried to the gate on the other side and out onto the Navigation trail close to the motorway bridge.  In no time at all I was in the meadows of the Itchen Valley Country Park. It felt good to know there were two closed gates and a tunnel between me and the cows. 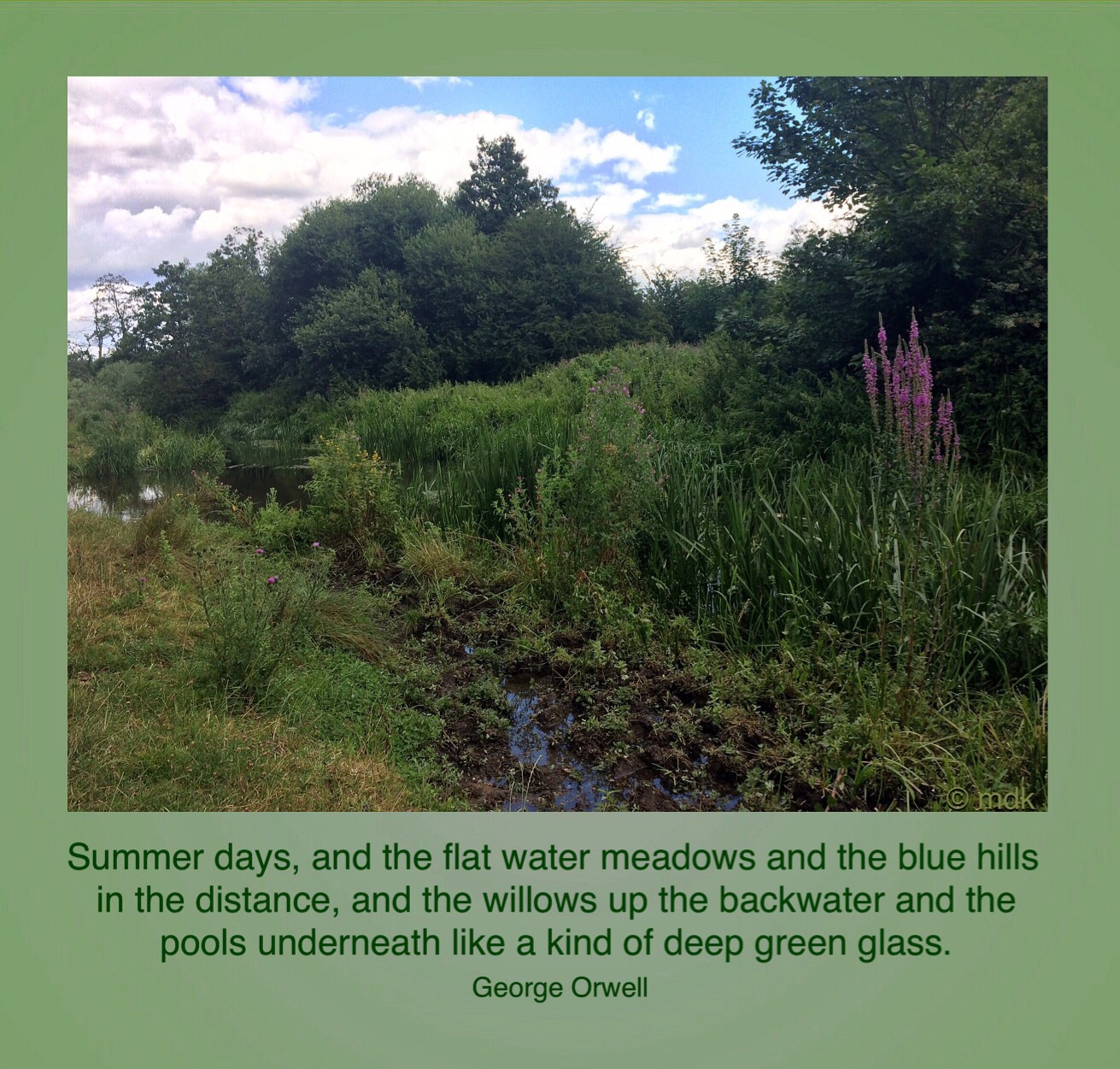 There were wildflowers on the riverbank, mostly thistles, toadflax and willowherb. Little circular ripples kept appearing on the water and, at first, I thought it was beginning to rain. I held out my hand feeling for raindrops and thought about fishing my mac out of my bag but the air was clear and warm. Puzzled, I climbed down the bank for a closer look and found hundreds of tiny fish just under the surface. In truth they were more fry than fish, rippling the water as they came to the surface. For a while I sat and watched the tiny, brownish grey fry through the crystal clear water. I took lots of photos but,  without movement, it’s hard to tell stones from fish. 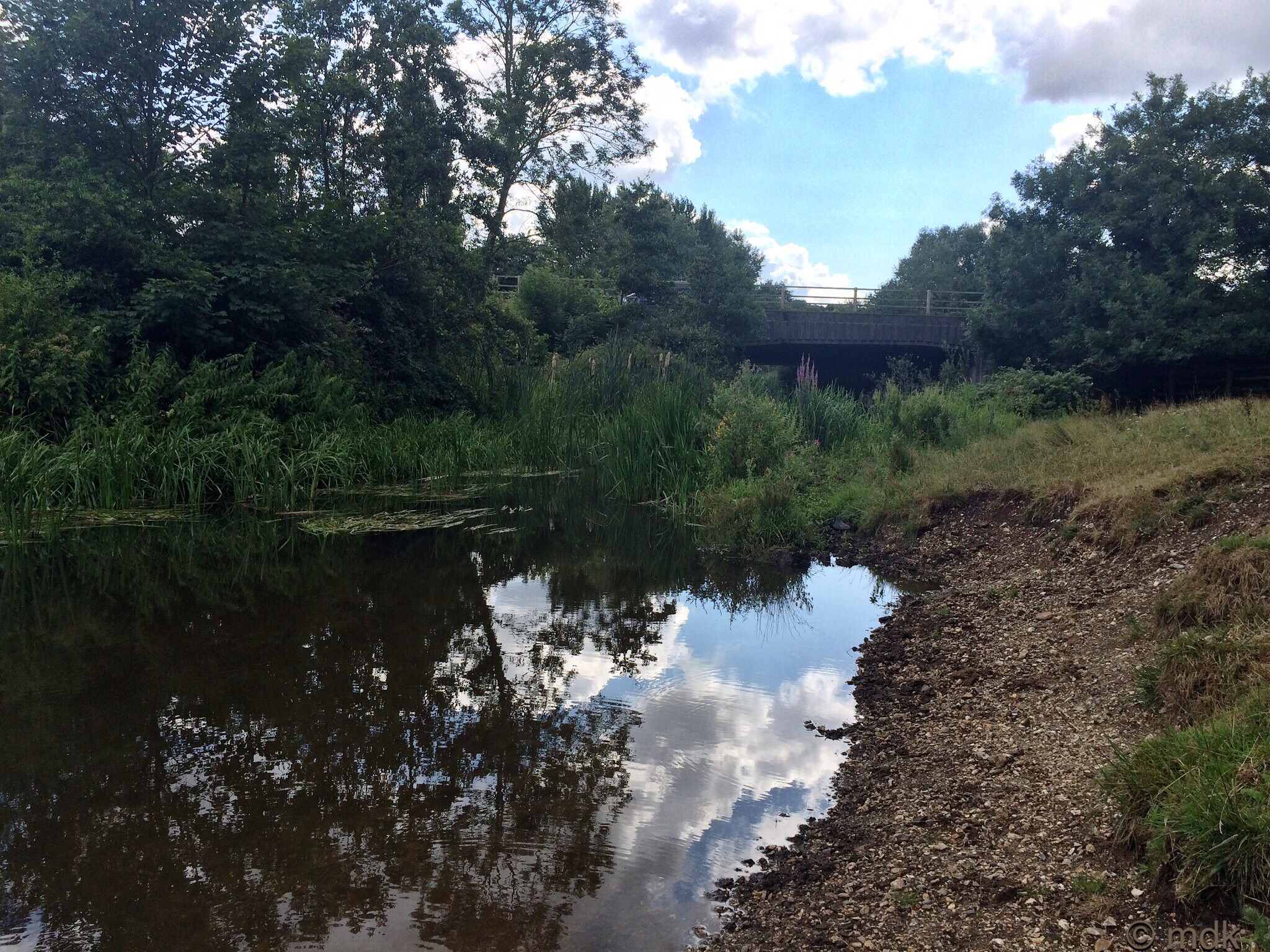 Eventually I left the fish and set off across the meadow. A plane taking off the from airport  behind the trees broke the silence. The hoped for fields of flowers proved illusive until I looked closely. Hidden in the grass were masses of self heal, deep mauve flowers in tiny spikes as pretty an any orchid but hard to photograph. 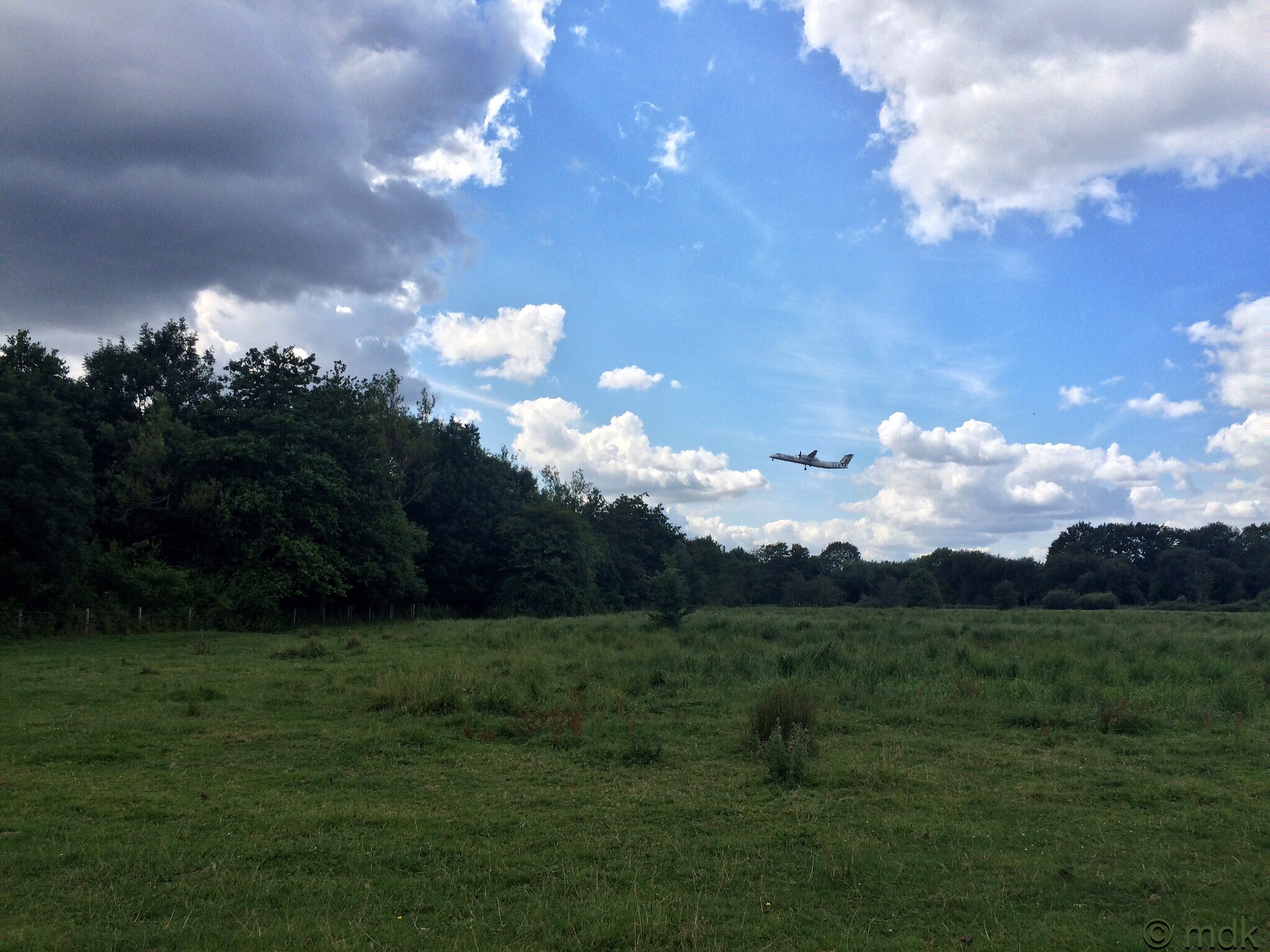 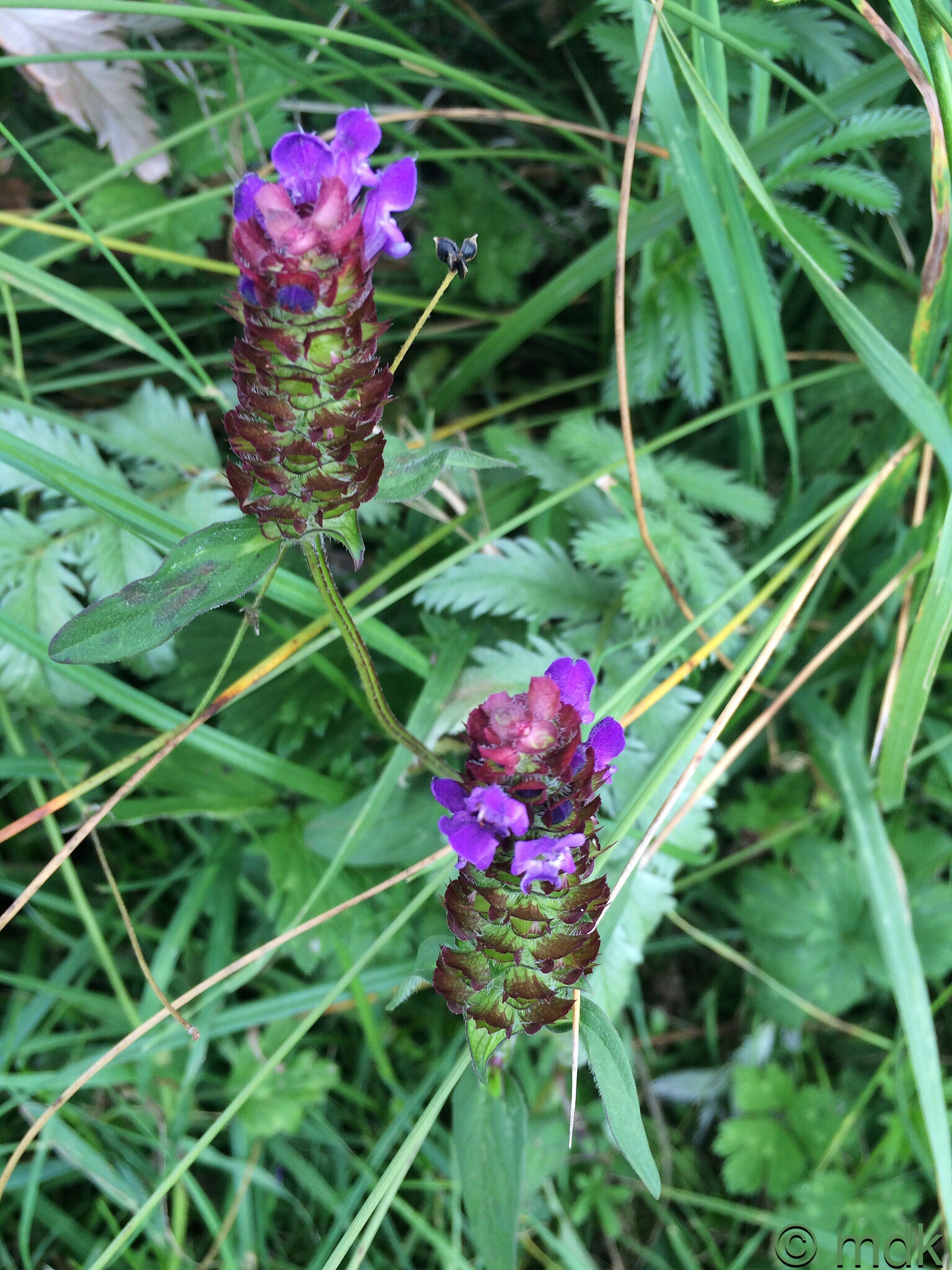 The tall flowers seemed confined to the riverbank. All I found were the low growers, self heal, buttercups, daisies and clover, nothing else exciting enough to stoop for. When I reached the fallen trees on the other side of the meadow I peeped across the boggy stream into the next meadow. There were more flowers here. Not the masses I’d hoped but yarrow, butterflies and, close to the bank, what looked like tiny orchids. For a moment I considered crossing, I even climbed over the dead tree and started down the bank before the mud brought me to my senses.

There’s a place to cross close to the Navigation fence but I was running out of time so I turned back towards the river. Soon enough I was going through the motoway tunnel with cars rumbling overhead. From the meadows you’d hardly know they were there and I wondered if any of the drivers realised they were passing such a beautiful, peaceful place as they wooshed down the road? 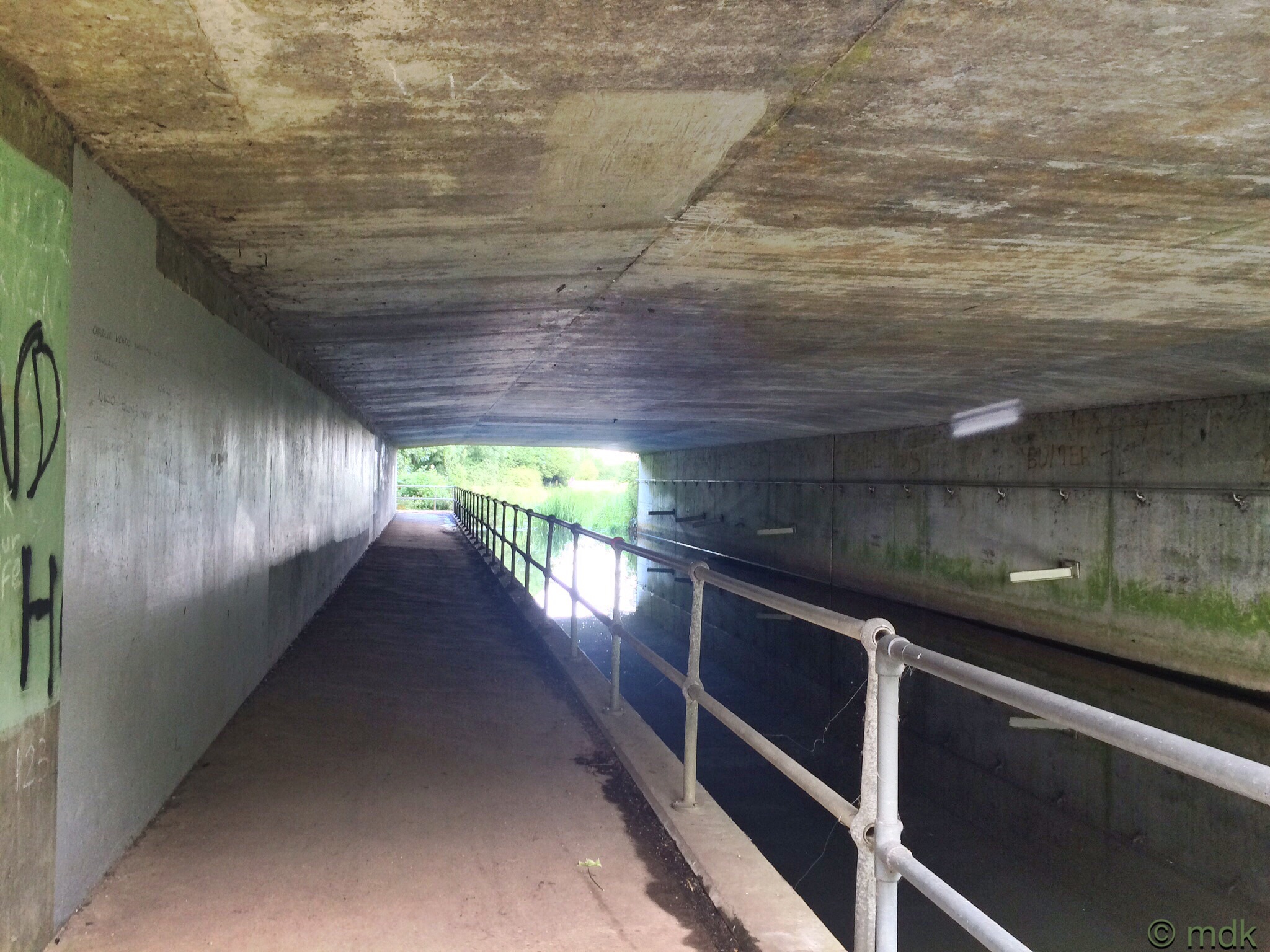 To my relief the cows were gone when I came back across the meadows. Even so I thought they may be hiding somewhere waiting to pounce so I hurried back to Mansbridge Lock. The walkers had disappeared revealing a screen of willowherb so thick I couldn’t see the water. There was a gap at the edge of the lock head and, on the other side, yarrow, knapweed, teasles and much more. Obviously, I’d been in the wrong place for wildflowers. It was alive with butterflies and dragonflies too. Sadly they were too quick for me although I did catch one dragonfly, a thick blue stripe amongst the grass. 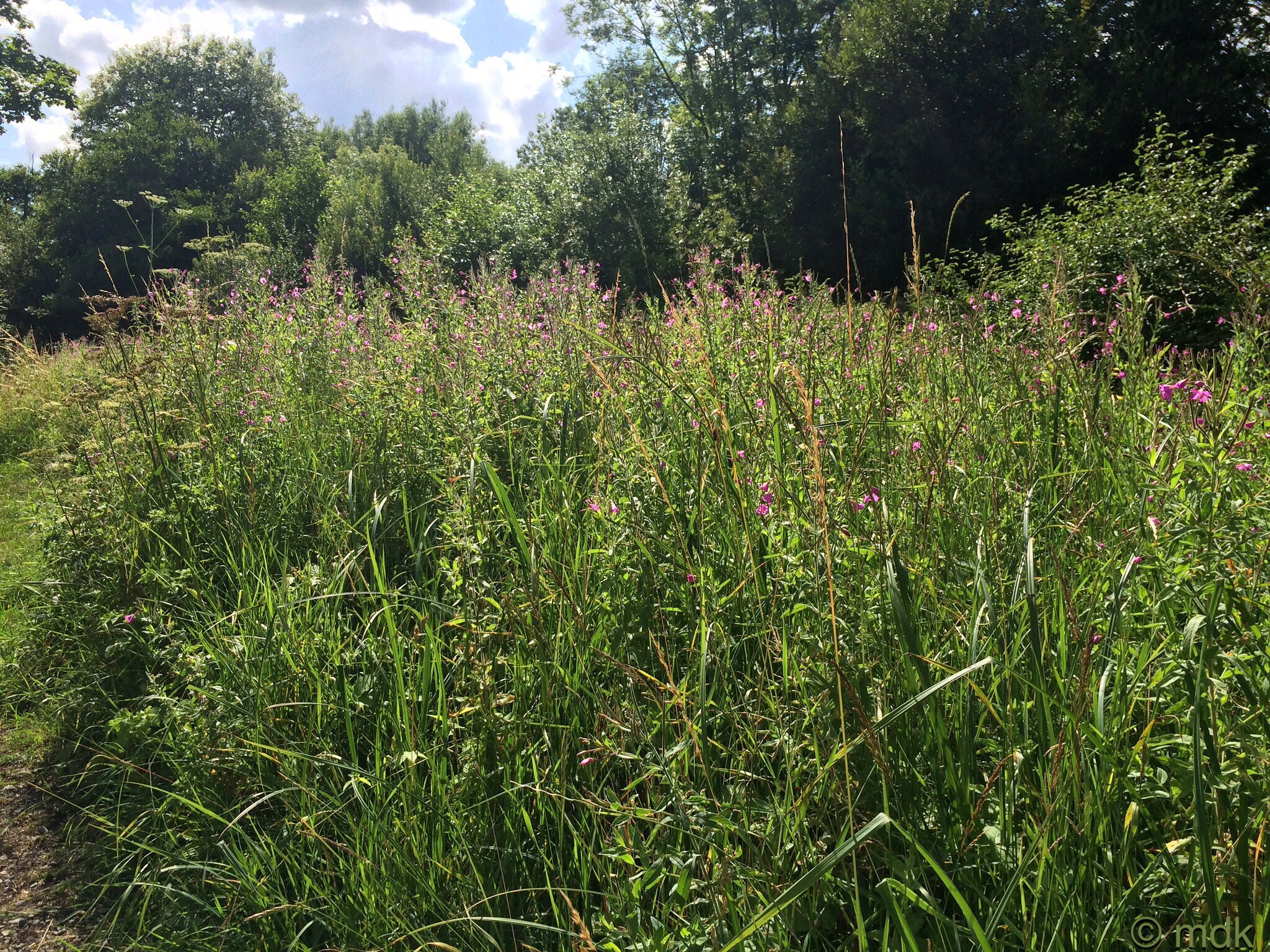 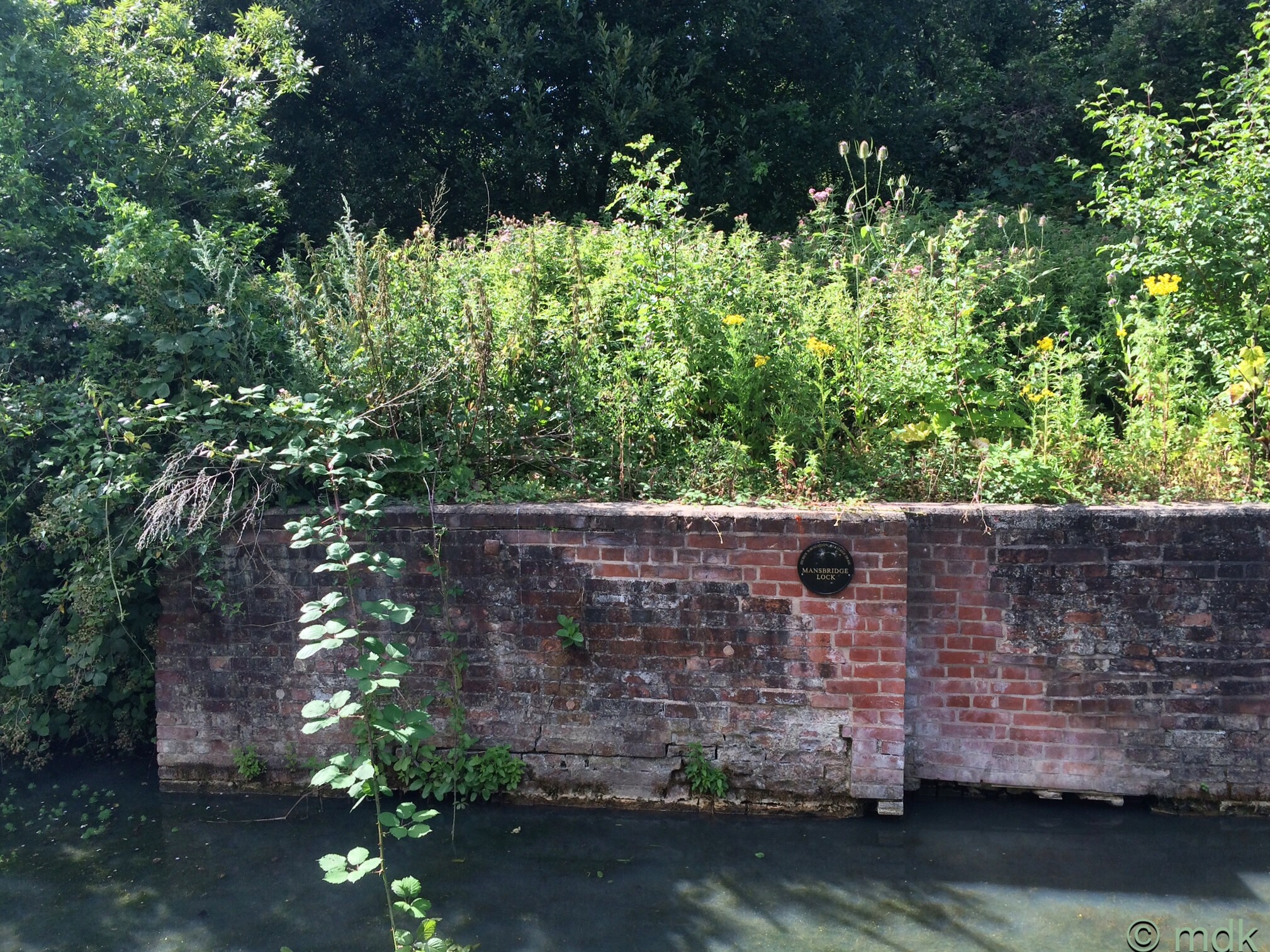 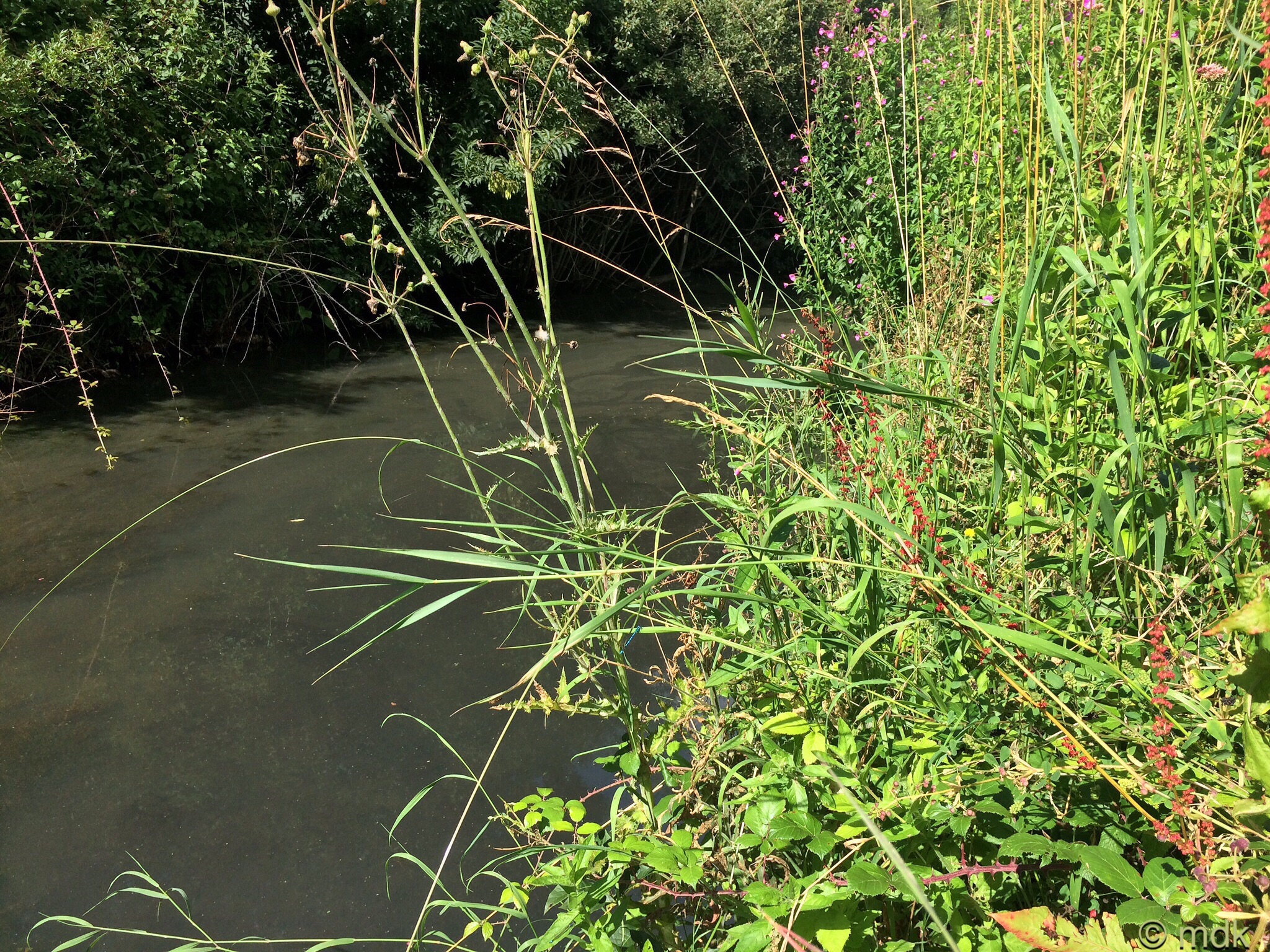 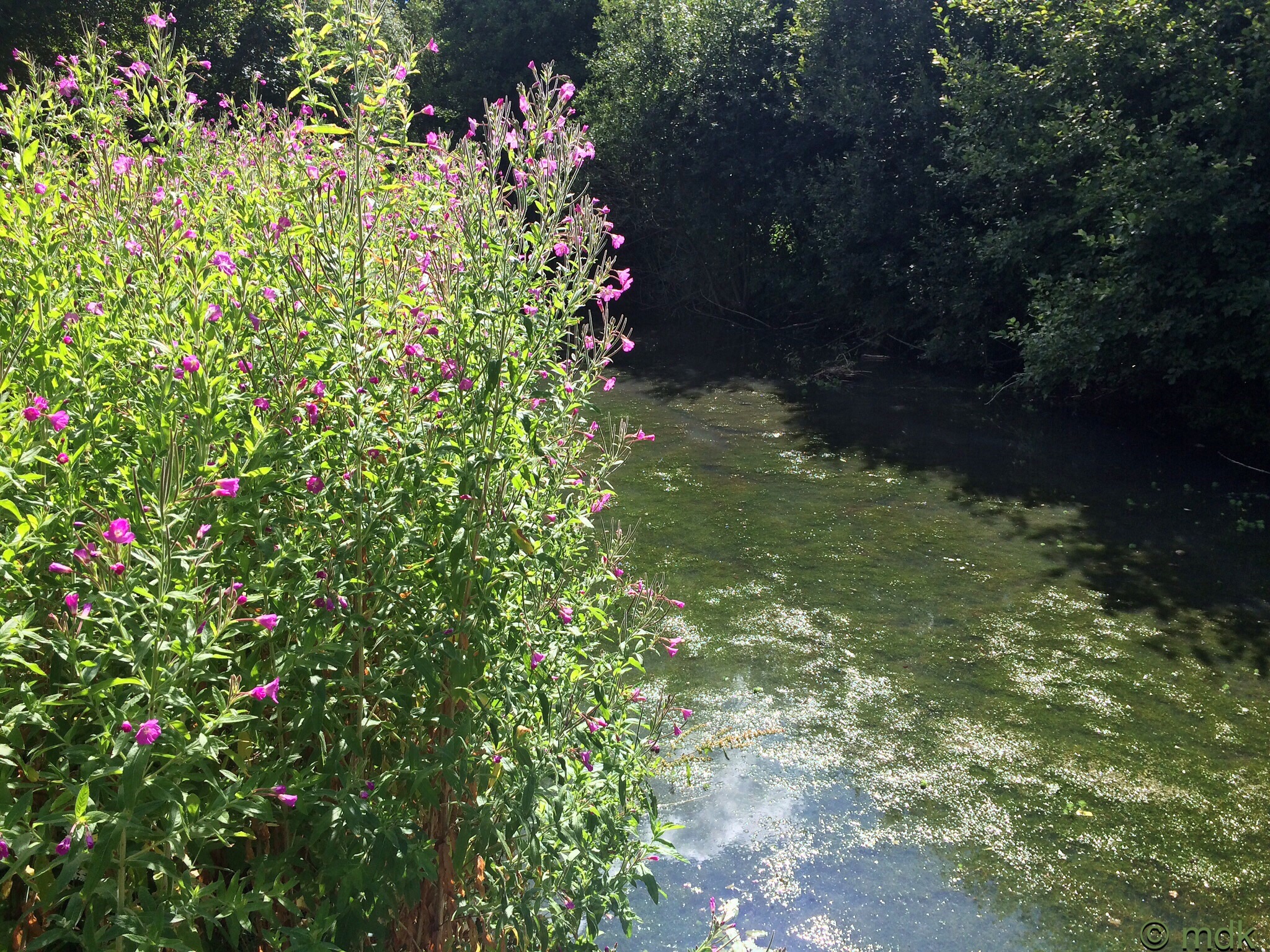 A day of heavy rain meant the empty lock was wetter than usual. Passing the mass of flowering blackberries I crossed the wooden bridge and made my way back through the grassy field to Mansbridge. Teasles were flowering beside the path and yet again I thought about getting some for the garden. 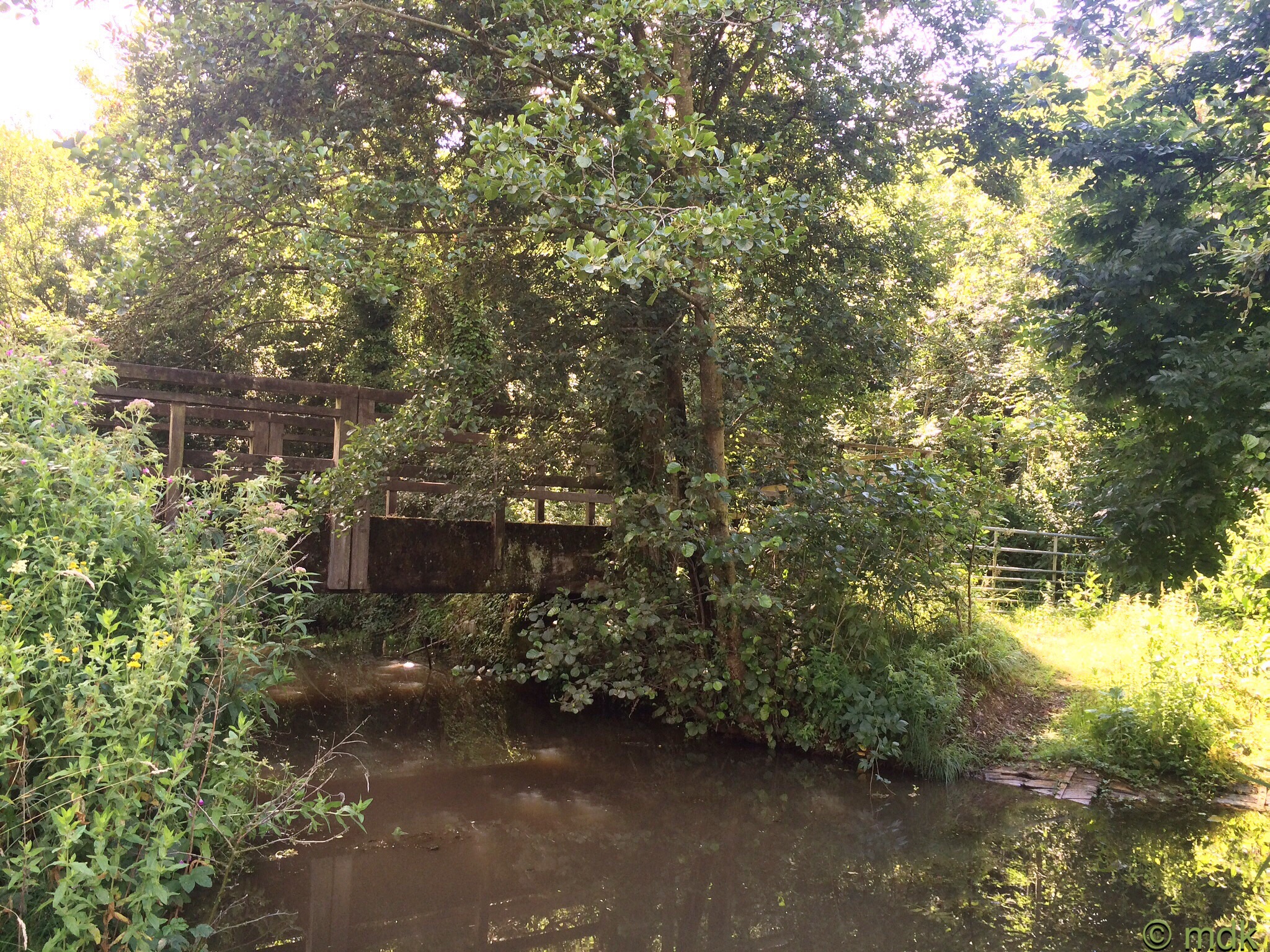 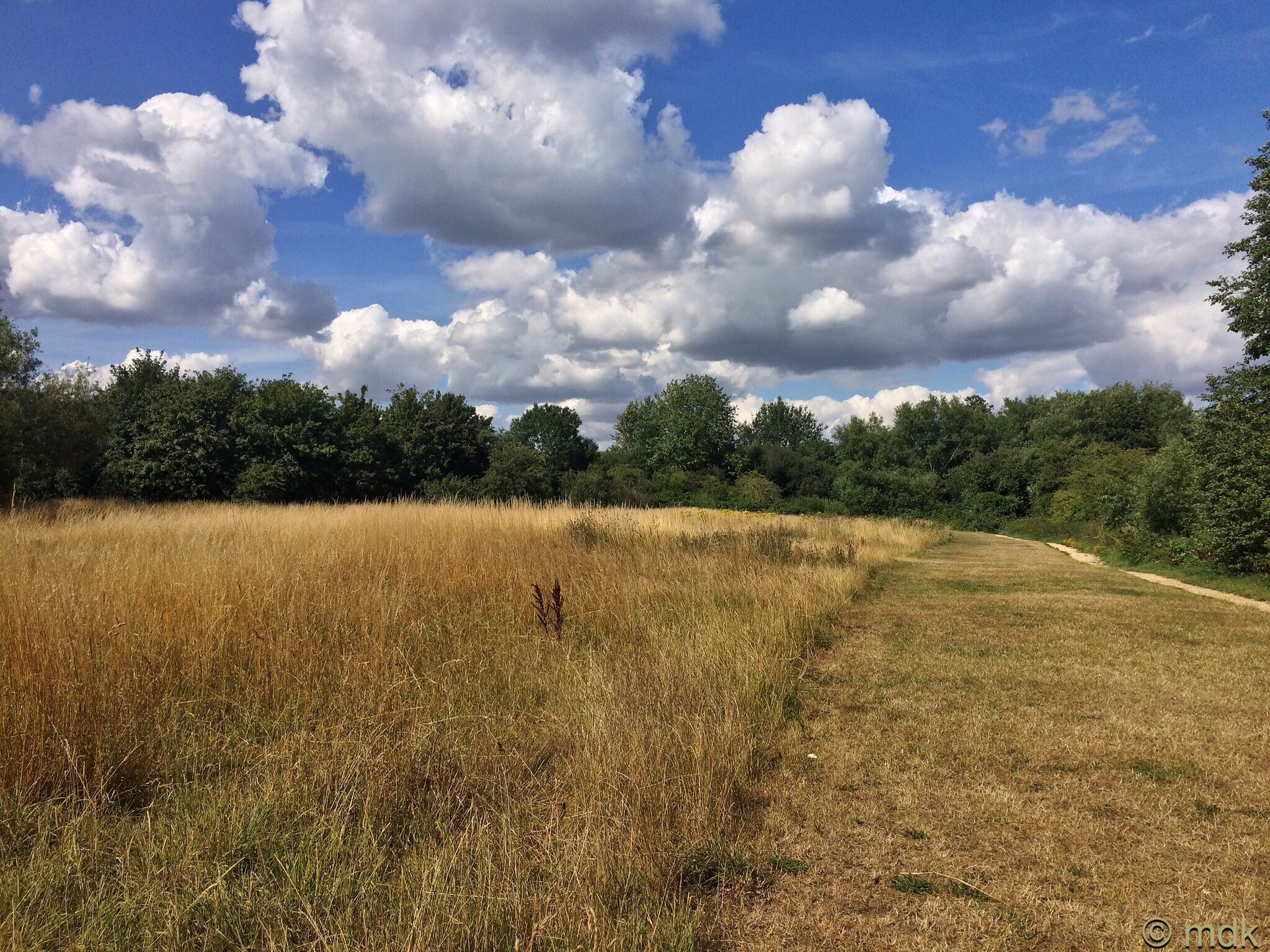 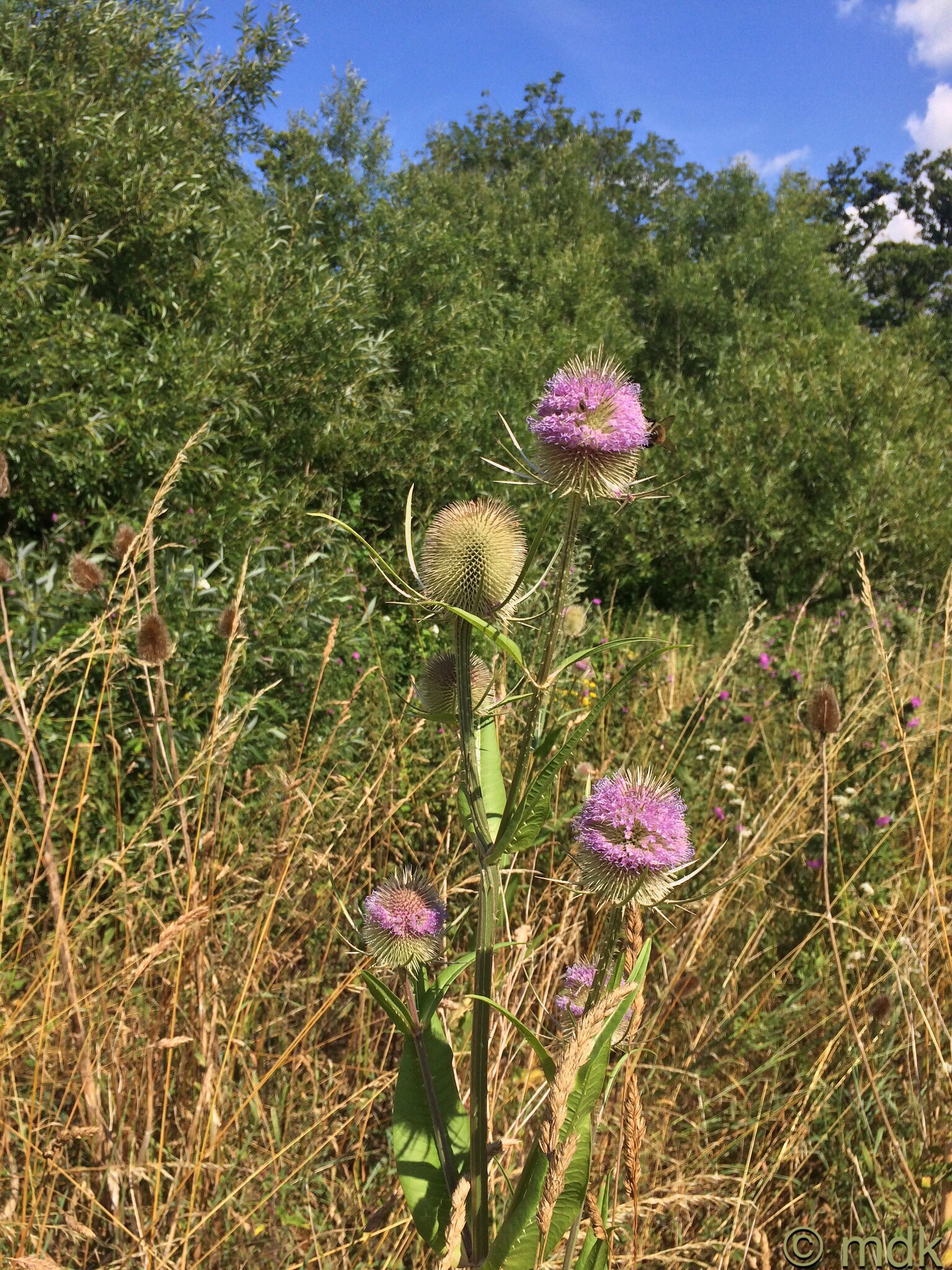 A group of teenagers were milling about by the road bridge. A few of the boys were in the river while the girls stood on the bank, sensibly watching. The lads looked uncomfortable, the water must have been cold. Further along more boys were clambering about on the old bridge, a group of giggling girls watching from the parapet. Three boys jumped in and were immediately dragged downstream by the current. Luckily they were strong swimmers. Later Commando remarked on the foolishness of youth and the danger of swimming there until I reminded him he’d been in that water a few times himself back in the day! 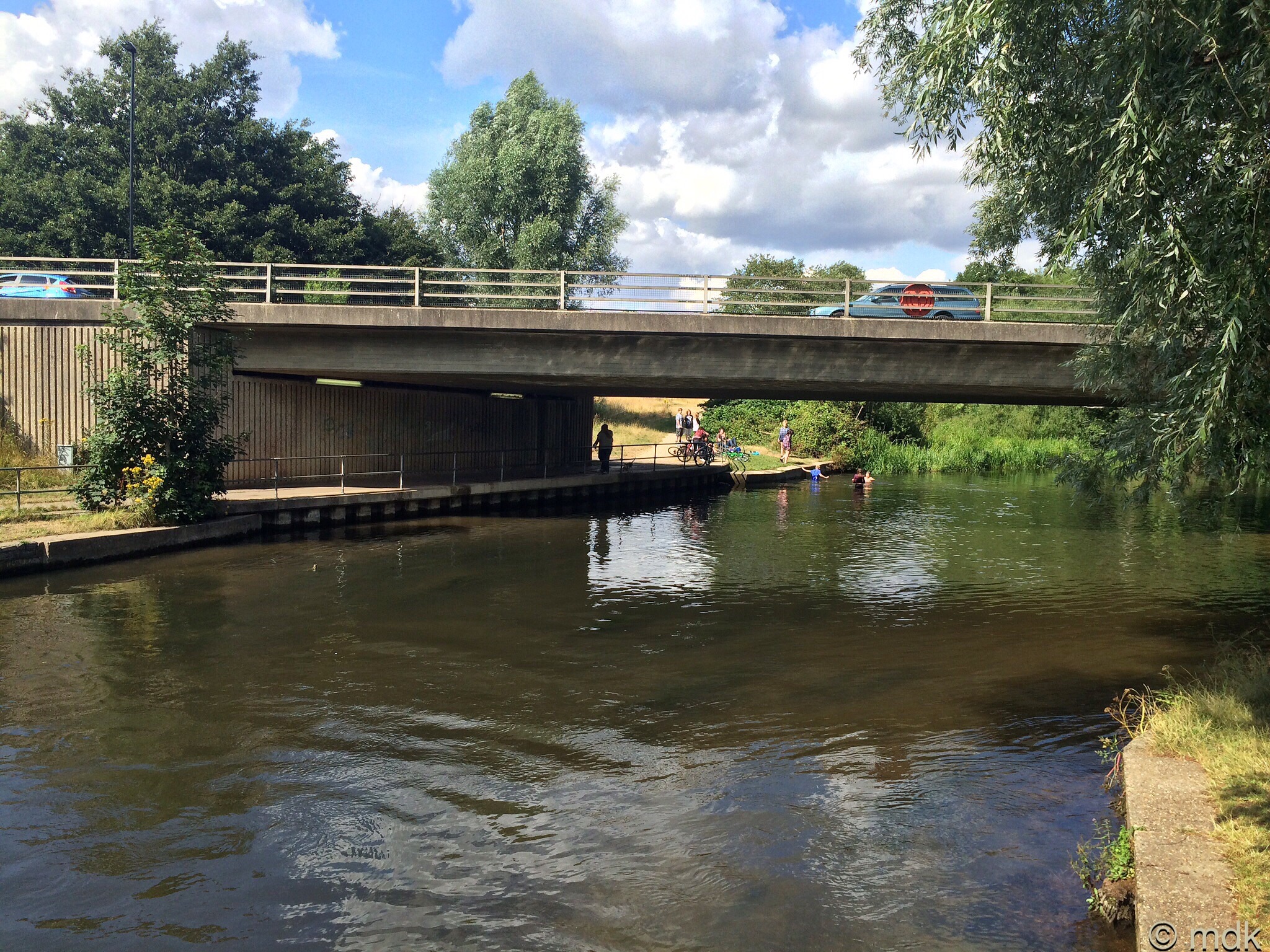 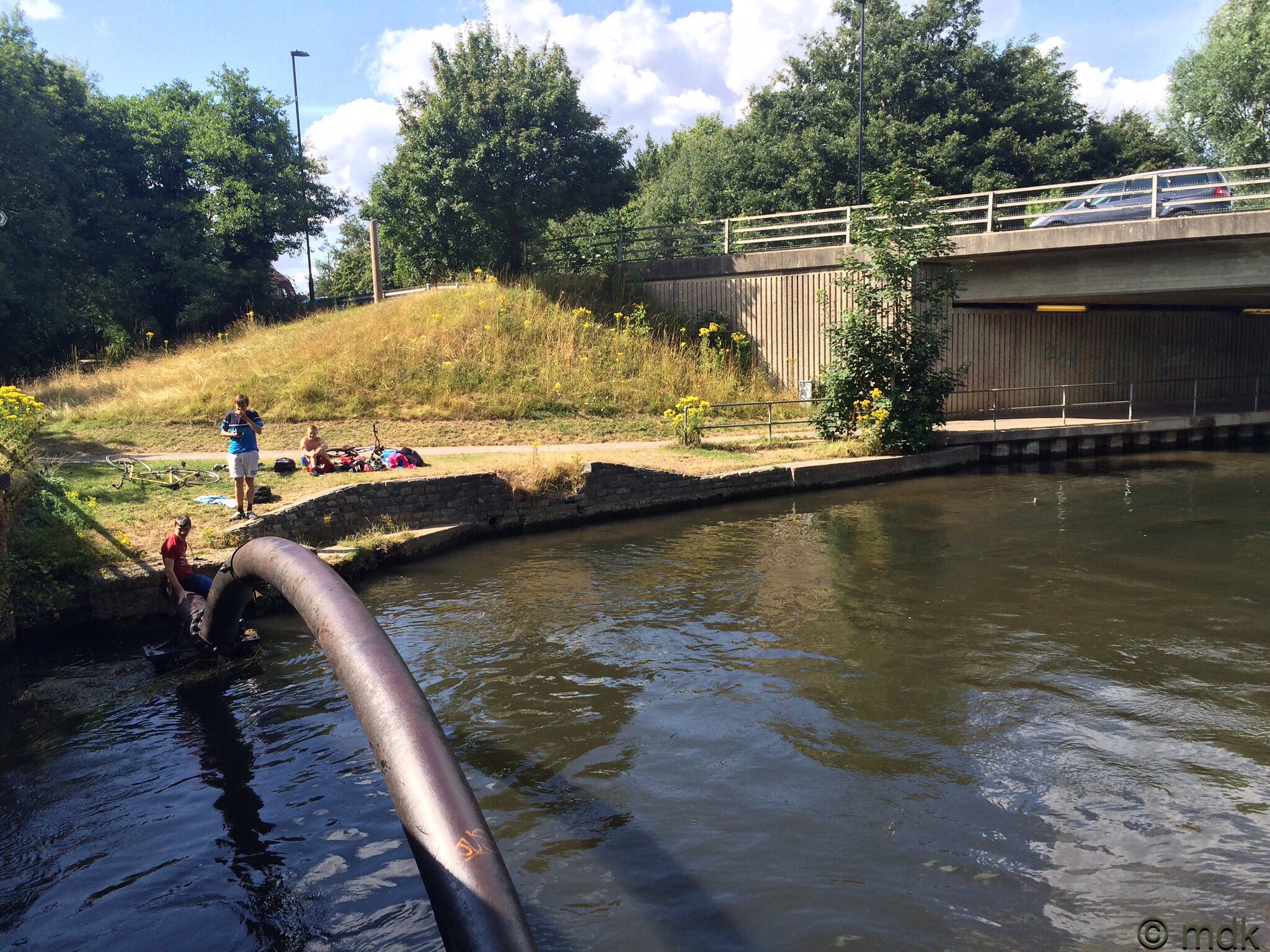 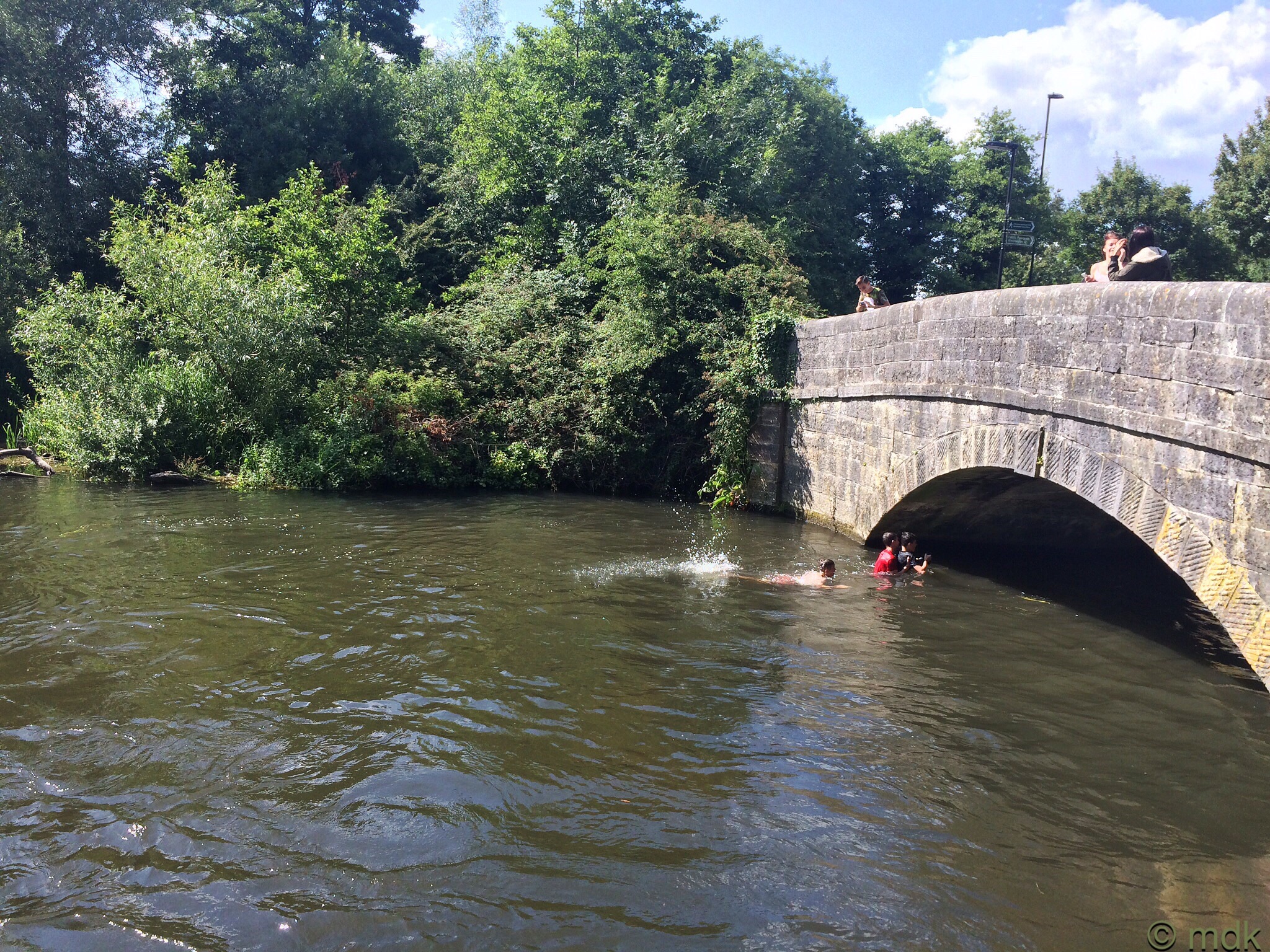