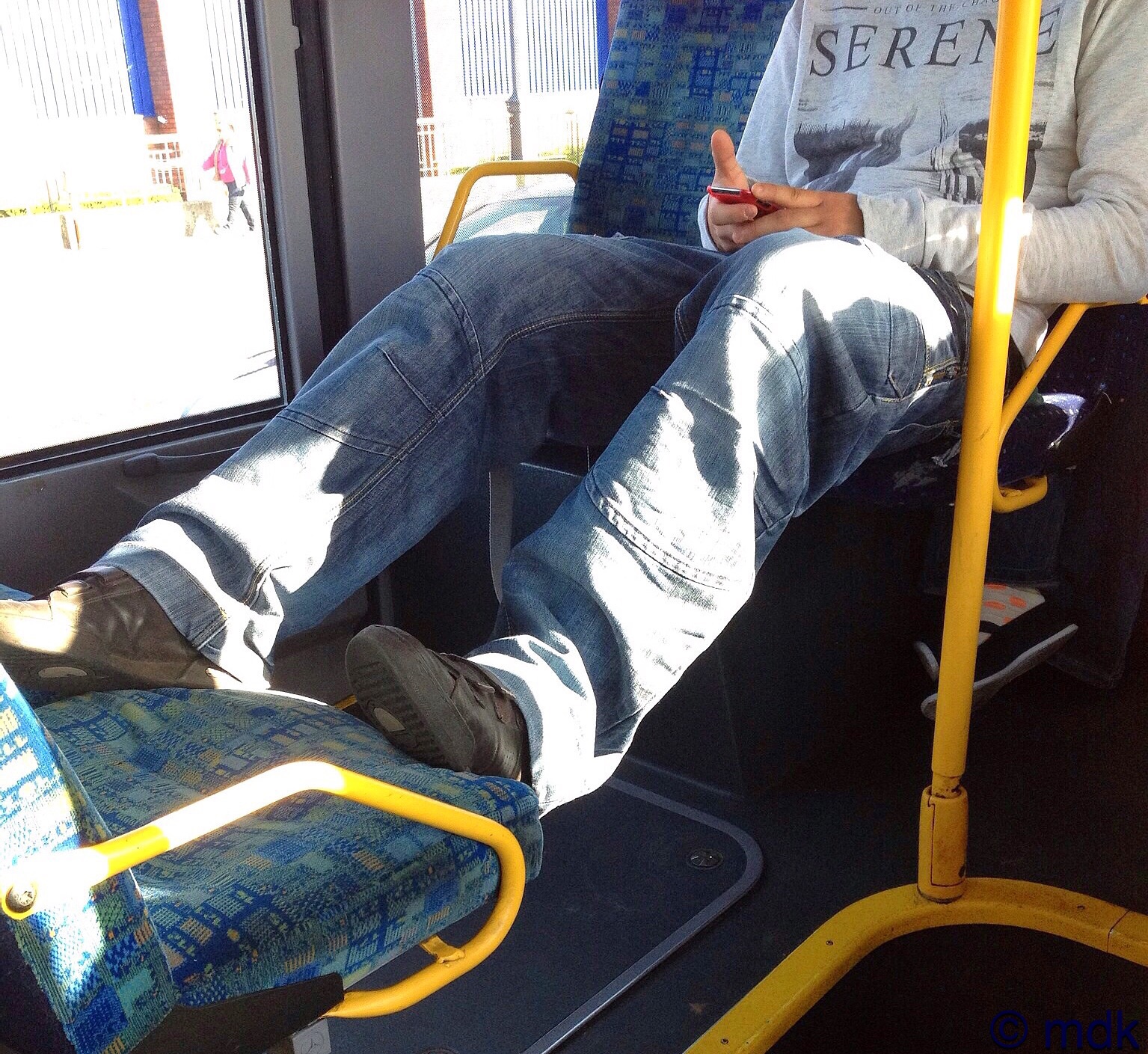 In April 2013 a bus trip had me thinking about manners, or the lack of them. Perhaps it’s a sign of the advancing years but it seems the modern world is full of thoughtlessness and the bus is a good place to see examples of it. Then there was a walk through St Mary’s and a close encounter with another sad reality of life in the twenty first century. All in all it made me wish I lived in a gentler, more polite time.

Last night when I got my work clothes out I was thinking of the lovely sunny weekend we had and chose a sleeveless dress and thick tights. This morning when I got out of bed that choice seemed a touch over optimistic but there was nothing for it, Commando was asleep so getting new clothes out would wake him up. At least I had a cardigan, if only a thin one. Unfortunately I couldn’t even count on a nice fast walk to work to warm me up. On Thursday I bought half a ton of paperwork home with me to prepare for Arabella’s return to the office, it nearly tore my shoulder off walking home with it and I had no plans to repeat the exercise in the opposite direction. I was getting the bus!

Getting the bus involves standing around at the bus stop waiting until a bus deigns to turn up. Standing around in a short dress and thick tights when it’s cold is not fun. Luckily I didn’t have long to wait. The first empty seat was occupied by the feet of the young boy sitting opposite but, as I could see seats further up the bus, I decided not to make a fuss and walk past. Turns out, of the two sets of four seats at the back of the bus, all but one was taken up by two young men. One sat on the outside seat, his bag on the seat next to him and his feet on the seat in front of him. He made no attempt to move as I approached. The other at least sat by the window, although his bag was in the aisle seat beside him and his feet were up on the opposite window one and a bit of the one next to it. leaving most of the other seat free for me. 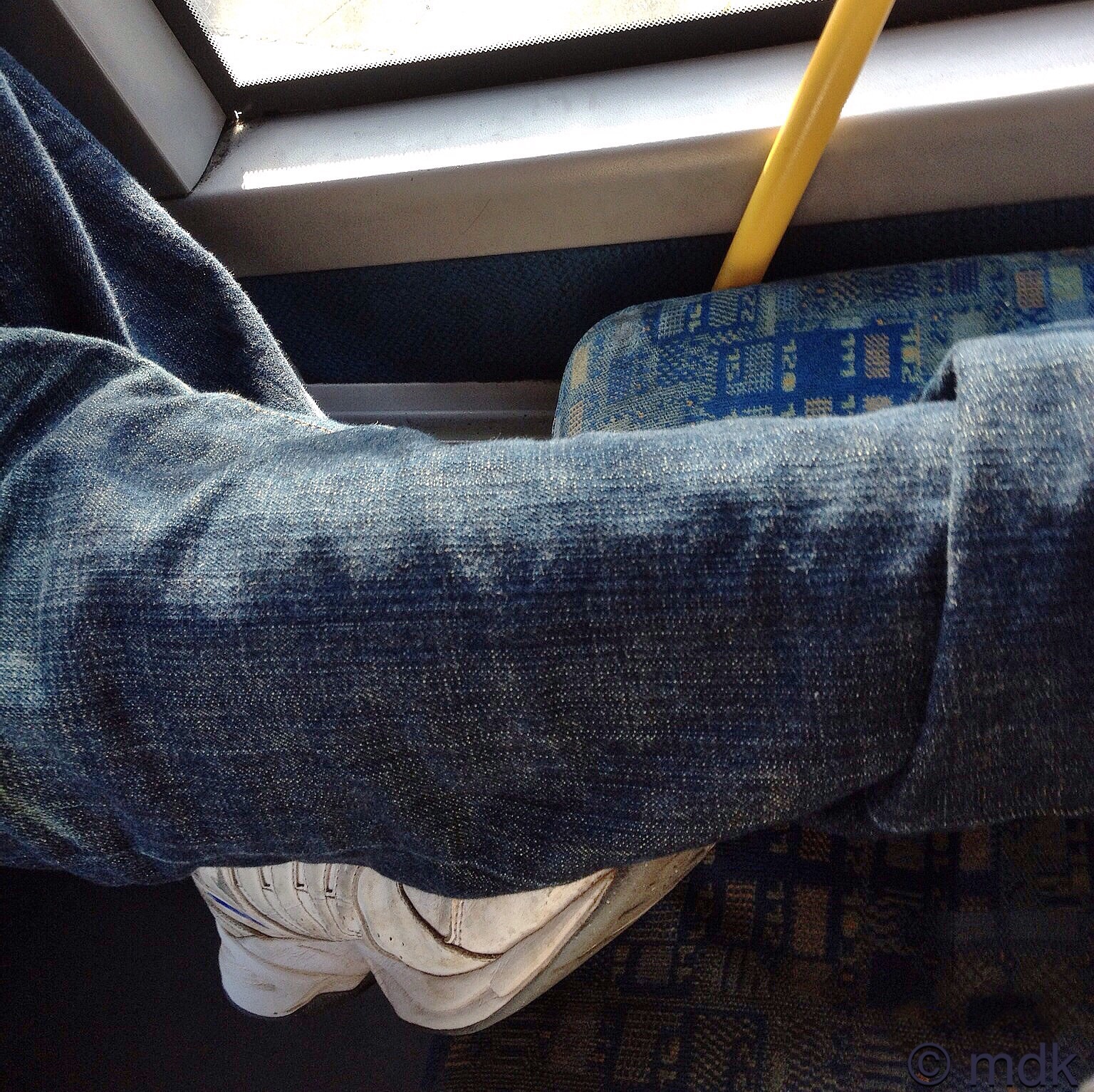 What is it with young men? Are they allergic to putting their feet on the ground when seated or do they have some kind of medical condition that means they can’t bend their legs at the knee? It does make me cross because it means all the seats on busses are permanently dirty from the shoes of said young men. Plus, if you want a seat, half the time you have to ask them to move after which they get surly and you then have to sit opposite them for the whole journey while they scowl in a menacing way. Did their mothers not tell them how rude this is or instil any manners? I know this is going to make me sound like a moaning old lady but I was always taught to be polite, to stand up for the elderly and infirm on busses and NOT PUT MY FEET ON SEATS. I taught my sons the same thing and heaven help them if I caught them doing anything less. 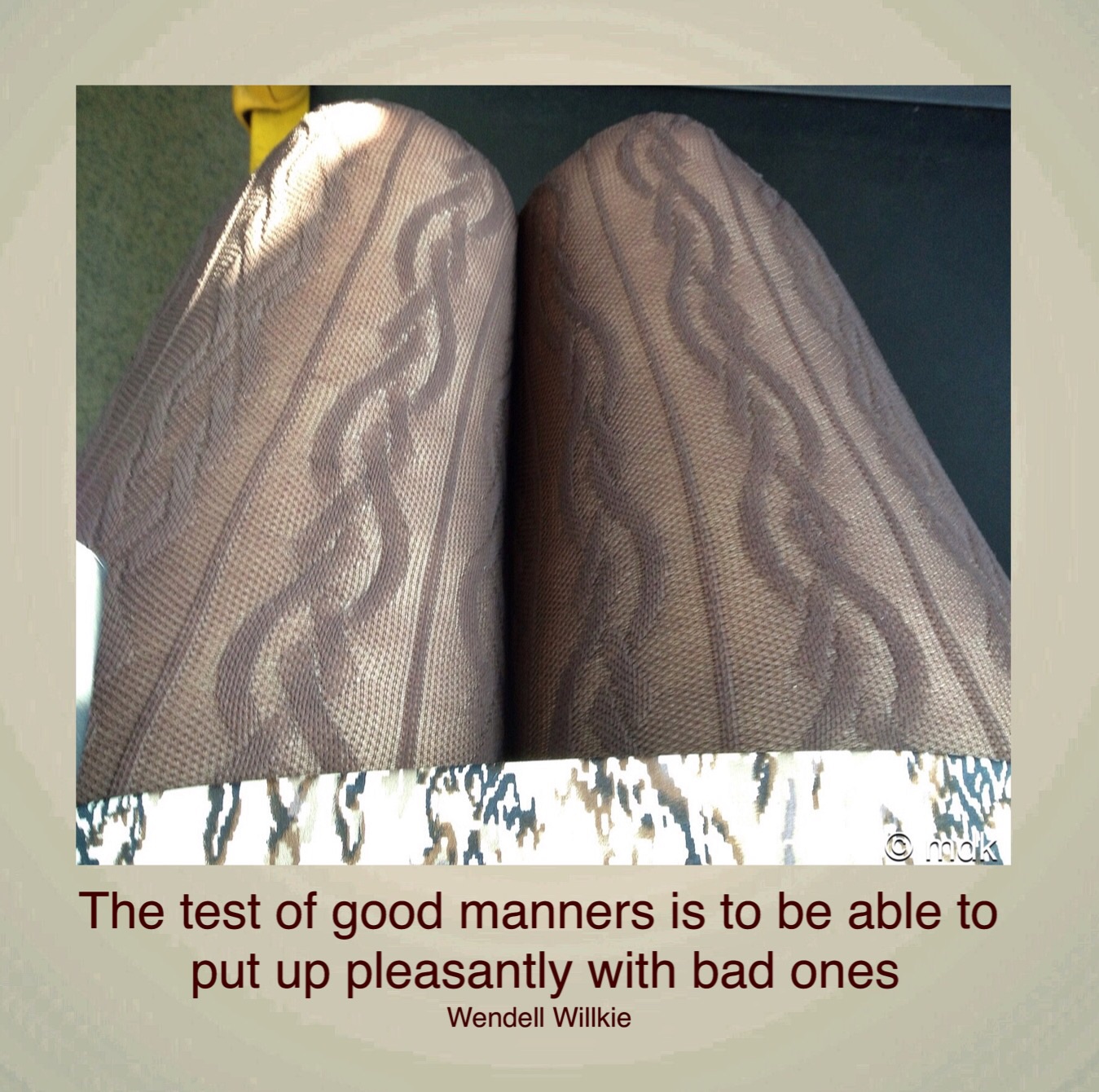 For some reason the bus I caught took a slightly different route to the ones I usually catch. This meant a walk through St Mary’s rather then through the park, albeit a shorter walk which was all to the good because it meant I could get in early and get things done before Arabella arrived. What I’d forgotten, until I actually saw all the police cars and men in white Tyvek suits, was the shooting in St Mary’s over the weekend and I was walking right past the flats where it happened. 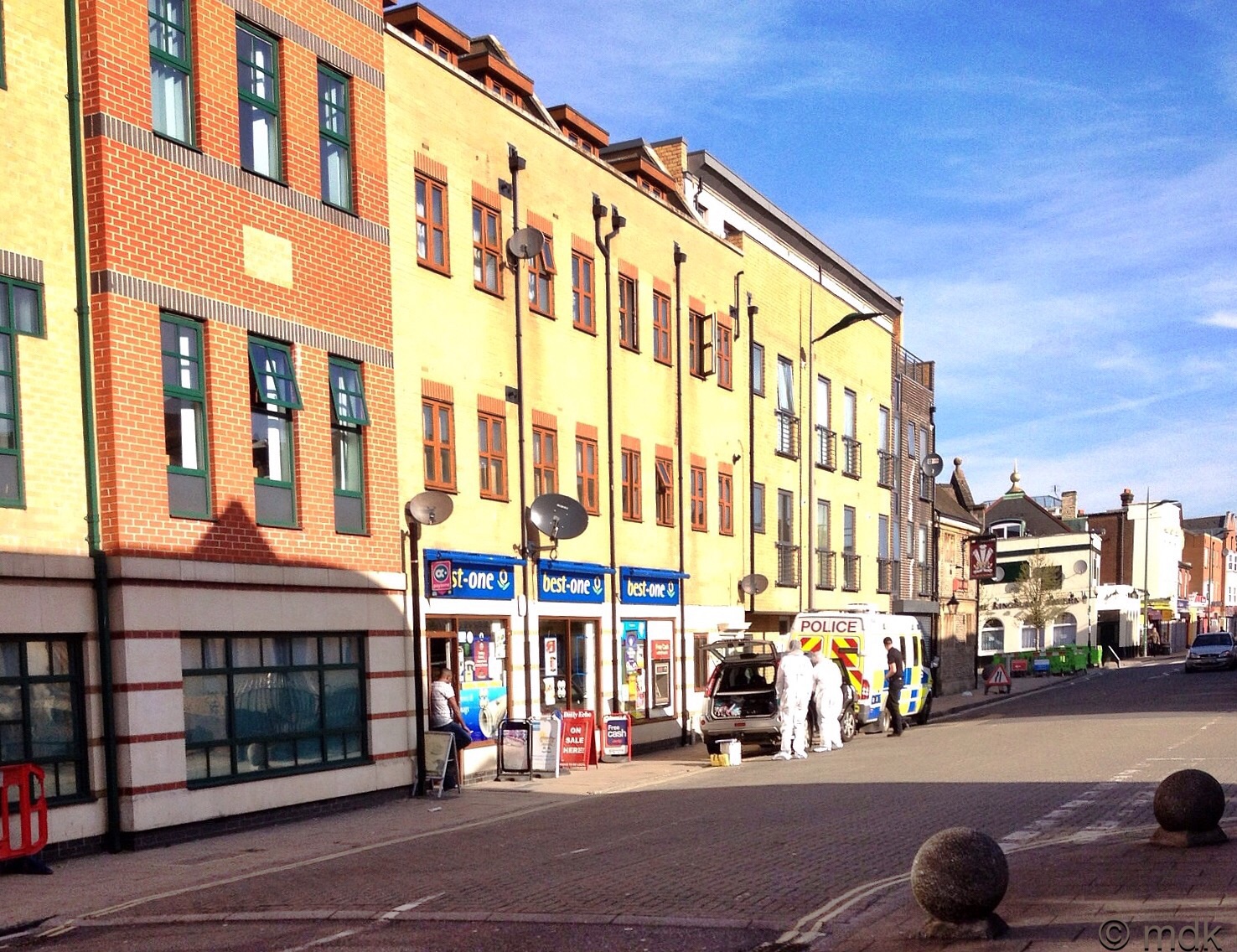 It is quite frightening to think of people being shot right here in my city on a route I often walk. After all I live in England not America where there are guns in every house. I’ve never even seen a real gun up close before. In fact the only time I’ve ever seen a gun, even from a distance, is at the airport or in the hands of foreign police. Guns scare the living daylights out of me and I’m glad I live in a country where they’re not allowed. Ok so farmers are permitted shot guns and I can understand that, but normal people can’t buy them, there are no gun shops and most certainly no one has hand guns, at least not legally.

It seems this shooting was a drug related killing behind closed doors so I guess there is no real danger to law abiding citizens but the police were certainly taking it very seriously. This is most definitely not an everyday event. The building was cordoned off and there were more policemen wandering about than I’ve seen anywhere except at a football match. I guess this place is probably the most crime free part of the city right now. 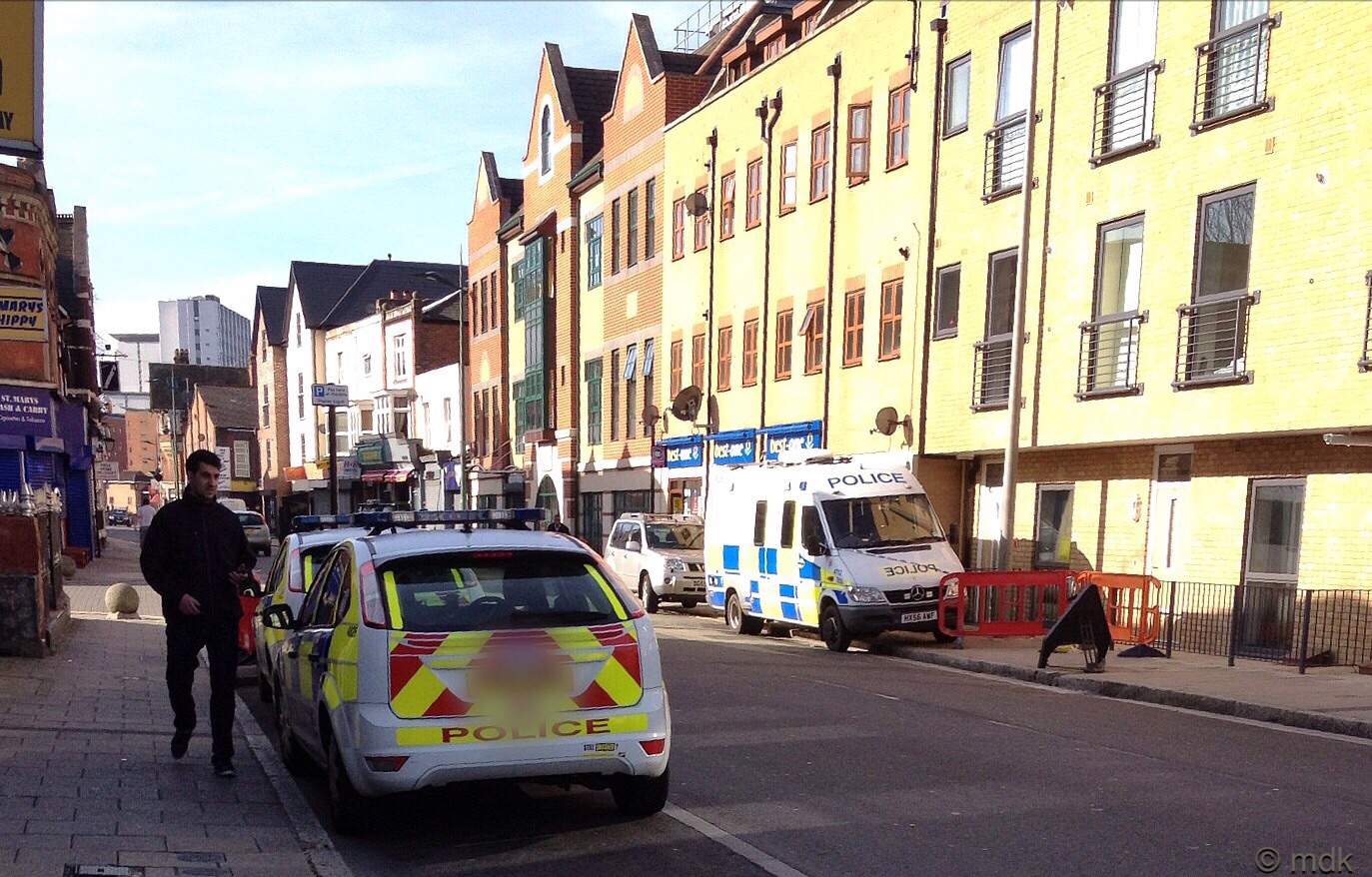 Arabella spent a good part of the morning in the COO’s office which at least meant I got the day to day chores out of the way before we started working our way through my humongous list. We were supposed to have our out of the office meeting today. This has been worrying me a little, even though Arabella said it’s nothing to worry about. As it turned out we didn’t because she spent so long in with the COO and then the agent who we were meeting with this afternoon turned up early. Now I’ll have to wait until tomorrow to find out what it’s all about. Grrr.

We did manage to get a few things off the list though which is good. There was a great deal of running up and down the stairs to the mezanine which made up a little for the lack of walking. There was also enough coffee drunk to float a battle ship and almost all my snacks came home with me uneaten. Every little helps in this weight loss journey.

Tomorrow I have to go in early so we can crack on with the rest of the list. This means an early night and getting everything prepared tonight before I go to bed. Maybe if I did that all the time I wouldn’t have to get up so early every work day, or I’d have time to fit in some weights or Pump It Up. Seems like ages since I last did that yet I did it almost every day when I worked at the Mad House and started later.

The day ended with another walk through St Mary’s it’s the quickest route home and, because I wanted to get things done tonight I wanted to get home as soon as possible. As I walked I spoke to Bard on the phone, he’d left me a text message and I hadn’t had time to reply so I called him. He actually wanted to tell me about the shooting. He lives quite nearby and, as soon as we heard about it on Sunday, we called him to check he was OK. At the time he knew nothing about it. Tonight he said he couldn’t believe he didn’t notice anything because there are police everywhere, knocking on doors and going through the bins behind his flat. He was a little concerned when I said I was walking past it all as we spoke but I told him it is probably the safest place in Southampton right now.

Today Commando Senior came out of hospital. He’s gone up to the farm to stay with Commando’s sister for a while so he doesn’t have to be on his own. There’s always someone at home there so he should be well looked after. Commando had to go and take delivery of some special equipment from the hospital then take it up to the farm which meant he didn’t get as much sleep as normal for a work night. Unfortunately I didn’t really get to speak to him much today so I’m not sure how he is but I do worry when he doesn’t get enough sleep. Night shift is tough enough Without being exhausted before you start.