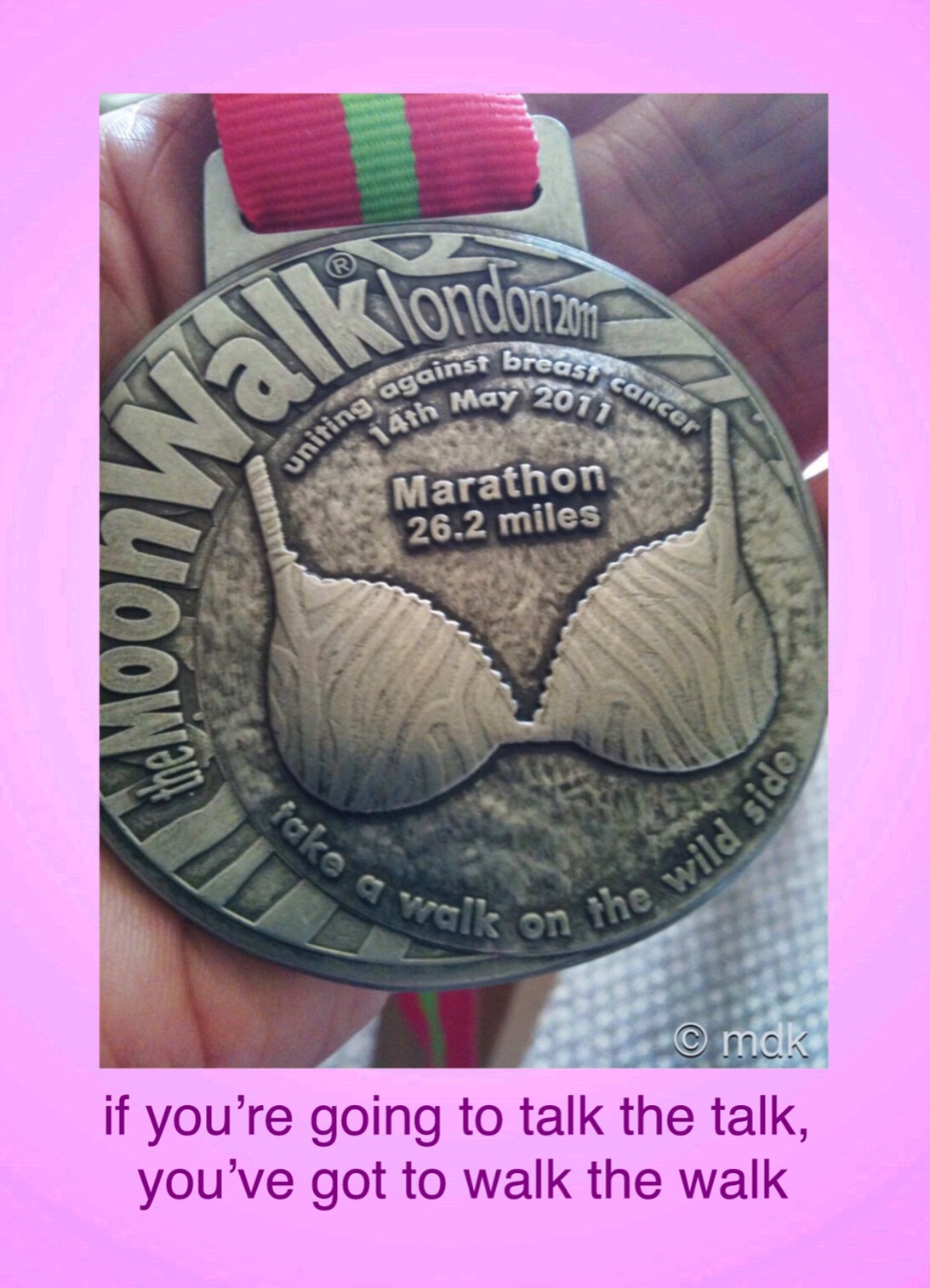 With twelve days until Moonwalk night I was finally getting prepared for the long, long walk. The first collection tin had been opened, the money counted and people who’d not walked it before were asking me for advice. So what did I tell them?

30 April 2011
Commando bought the Moonwalk collection tin home from work over the weekend and last night I counted it all. There was a grand total of £33.44 in there which is pretty wonderful. This means I’ve raised more than £100 so far. Ok so it’s not millions but every little helps and I haven’t even done the walk yet so, hopefully, there will be more to come. So a GREAT BIG THANK YOU to the night shift at Commando’s works and everyone else who donated, you know who you are. You are all stars! 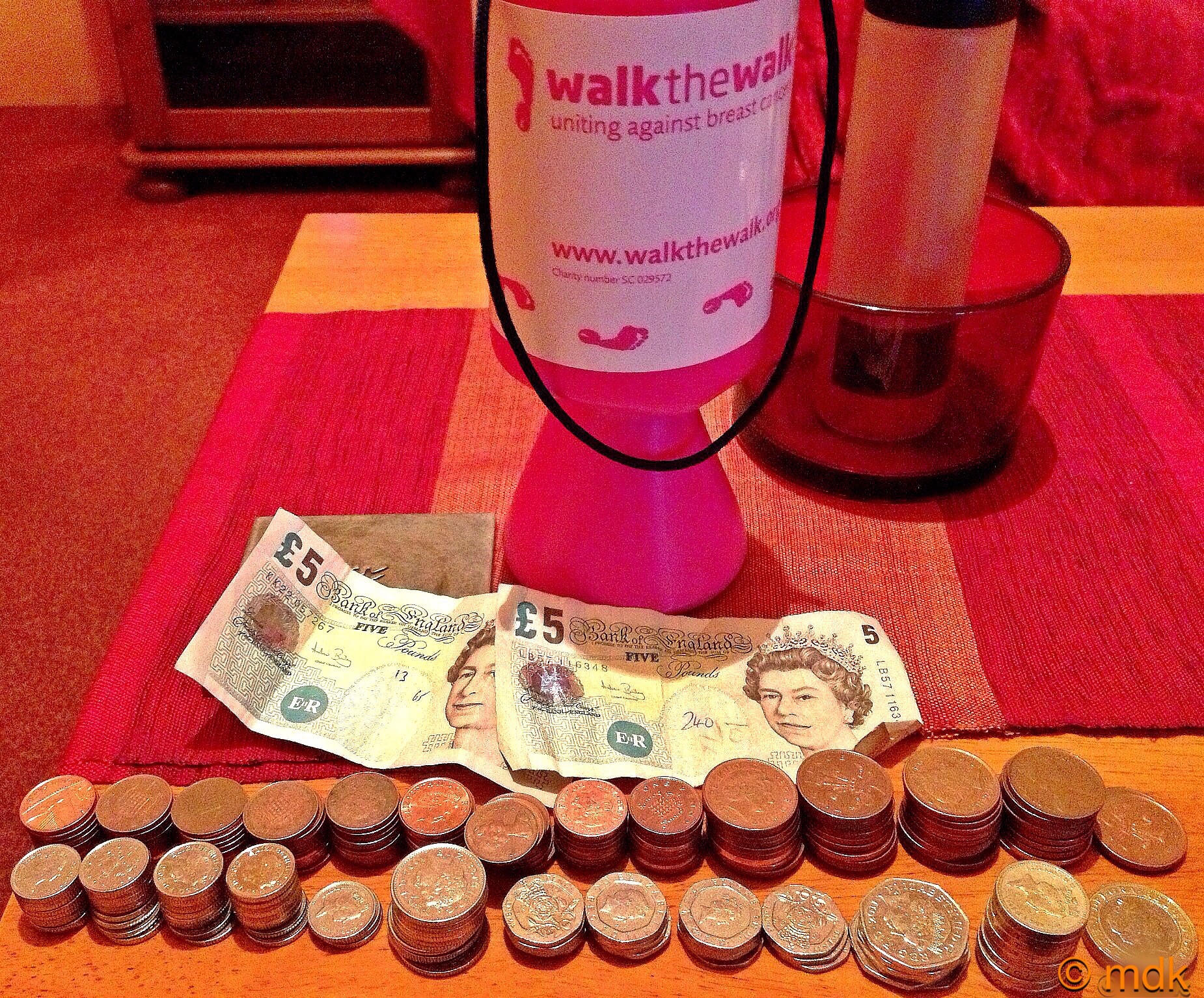 After a weekend that seemed to be all about walking, this morning there was none. I confess to getting the bus, mainly because I had the huge bag of paperwork that I swept off my desk on Wednesday night and sorted out when I got home. It was heavy and I was tired. The bus ride was also a nice rest for the knee which is still not quite right. By pure chance I got on the one bus that takes a route quite close to the office so there wasn’t even a walk through the park which was actually quite disappointing. It did mean I got to work early though and, given the amount I had to do, that was no bad thing.

Just after midday there was a sudden power cut and all the lights and computers went off, thank heavens I wasn’t in the lift. This was a good opportunity to break off and go for a lunchtime walk. Today I had a mission. Our wedding anniversary is tomorrow and I had a present to buy. Yes, I know I left it a bit late but the weekend was rather busy. We have a rule that it has to be something small and related to the number of years we’ve been married. This turned out to be rather more difficult than expected but eventually, after a brainwave, I managed it.

Back in the office, all the systems were down because of the power cut. Frustrating in the extreme! There was also an announcement, we have a new COO and he’s visiting the office tomorrow. A great deal of tidying up commenced, well there wasn’t much else we could do with no systems. The announcement wasn’t unexpected because we all knew our present COO was only temporary but I’m thinking tomorrow will be a touch nerve wracking, especially as the CEO will also be visiting the office.

Eventually the systems were back and I did manage to get some work done. Just before five thirty there was an email from Arabella asking me to find some information for her which I did. It took a few minutes and when I emailed her back I got a very quick response, “time for you to go home!” So I did. This time I walked.

My WLR friend, Jen, sent me a message last night with a few questions about what to take on the night of the Moonwalk as it’s her first and she’s getting a little worried. Of course I replied to her but it got me thinking there might be other people out there feeling the same. Obviously I’m not a Moonwalk expert like Mr Bumble but I have done one and I definitely learned a thing or two that time so here goes…

What to wear? Well a decorated bra obviously (no I haven’t done it yet) and I am going for leggings. Last time I wore cropped ones, this time I will wear long ones. Why you ask? Because it was flipping freezing. When the sun goes down the temperature drops so, even if its been a warm day, it gets cold. I can’t see us having a heat wave on May 11 somehow so I’m going to be prepared. I will also have a warm fleece. Yes I know I’m supposed to be showing off my bra (if I ever get round to decorating it) but I can leave the fleece undone and at least my arms will be warm. I can tie it round my waist if it gets warm when the sun comes up. Oh yes, not forgetting my Walk the Walk bright pink beanie, I hate cold ears.

I know some people go overboard with net skirts and the like. My bum is big enough without adding extra bulk so I probably shan’t be doing that. What I would say is have a trial run with anything you plan to wear to make sure nothing scratches or rubs, especially anything you sew on your bra (under the arms is a danger point) this is important because a tiny irritation can become a big problem over the course of twenty six miles and six or more hours.

The Walk the Walk people tell you not to carry bags or rucksacks because they can rub or cause back or shoulder pain over such a long distance. Despite this I will be carrying a rucksack but it’s one I’ve walked the whole twenty six with and it’s ultra light. It was actually designed for trekking in the Amazon jungle and was given to me by Arabella. If you want to carry a bag make sure you put some long miles in with it first. In my rucksack I will probably have my windproof waterproof coat rolled up just in a case of rain or really cold weather. I will also have snacks and two, or possibly three, bottles of chocolate milkshake. 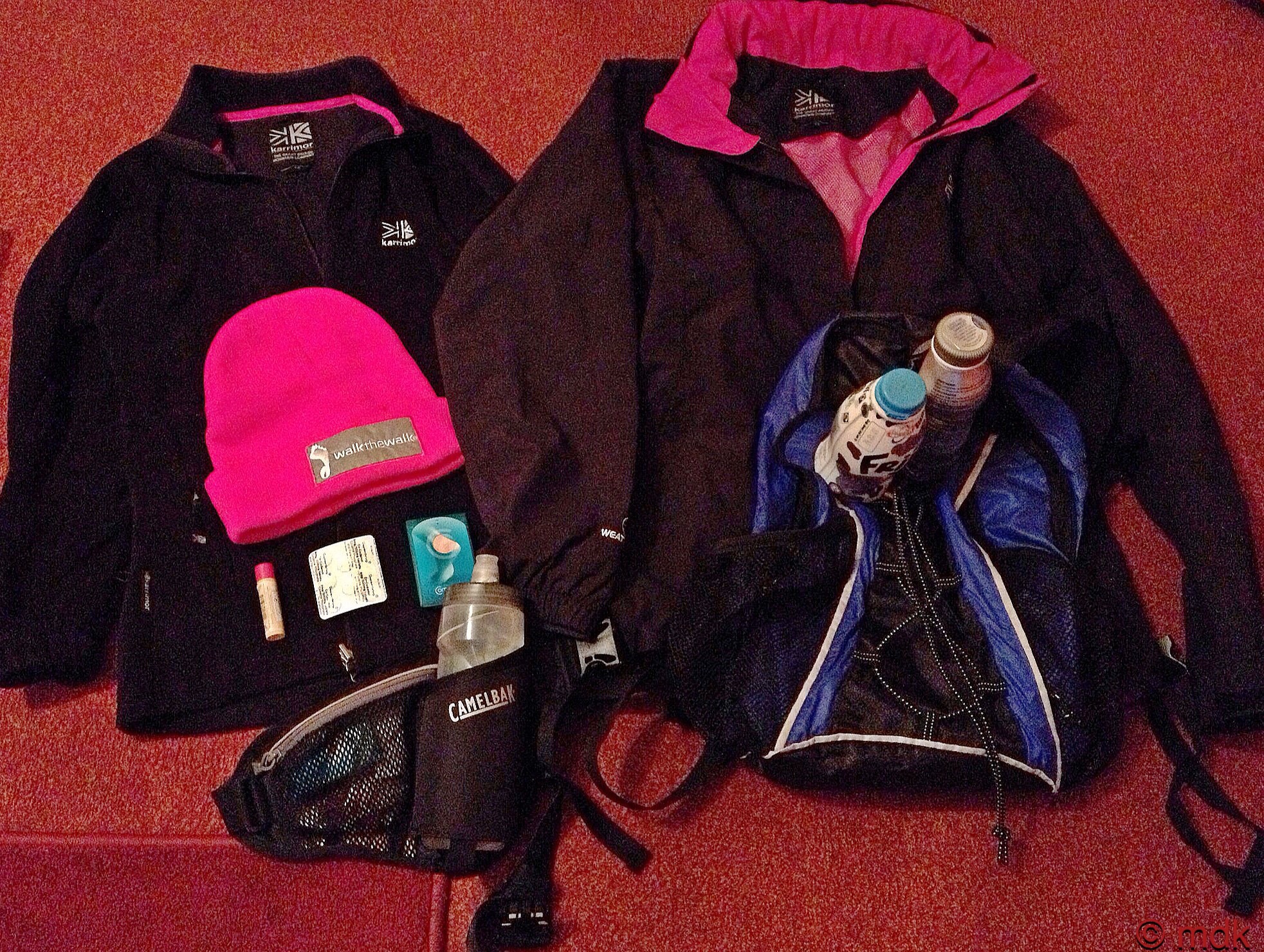 Snacks are important. If you’ve been reading about my training you will know I use them as incentives and allow myself a snack every five miles or so. They also give an energy boost which is much needed, I find I begin to flag around the seven mile mark because I’ve used up all my glycogen stores. Eating a high carb snack every five miles (round about once an hour give or take) stops this happening. My snacks of choice are yogurt coated fruit and chocolate buttons, I may also take some granola or granola bars. Recently I discovered Nakd Bars, the chocolate orange ones are amazing, but I’m a bit worried about the dates having an unfortunate effect so I’m not sure about those. Think I need to do more research on that one. 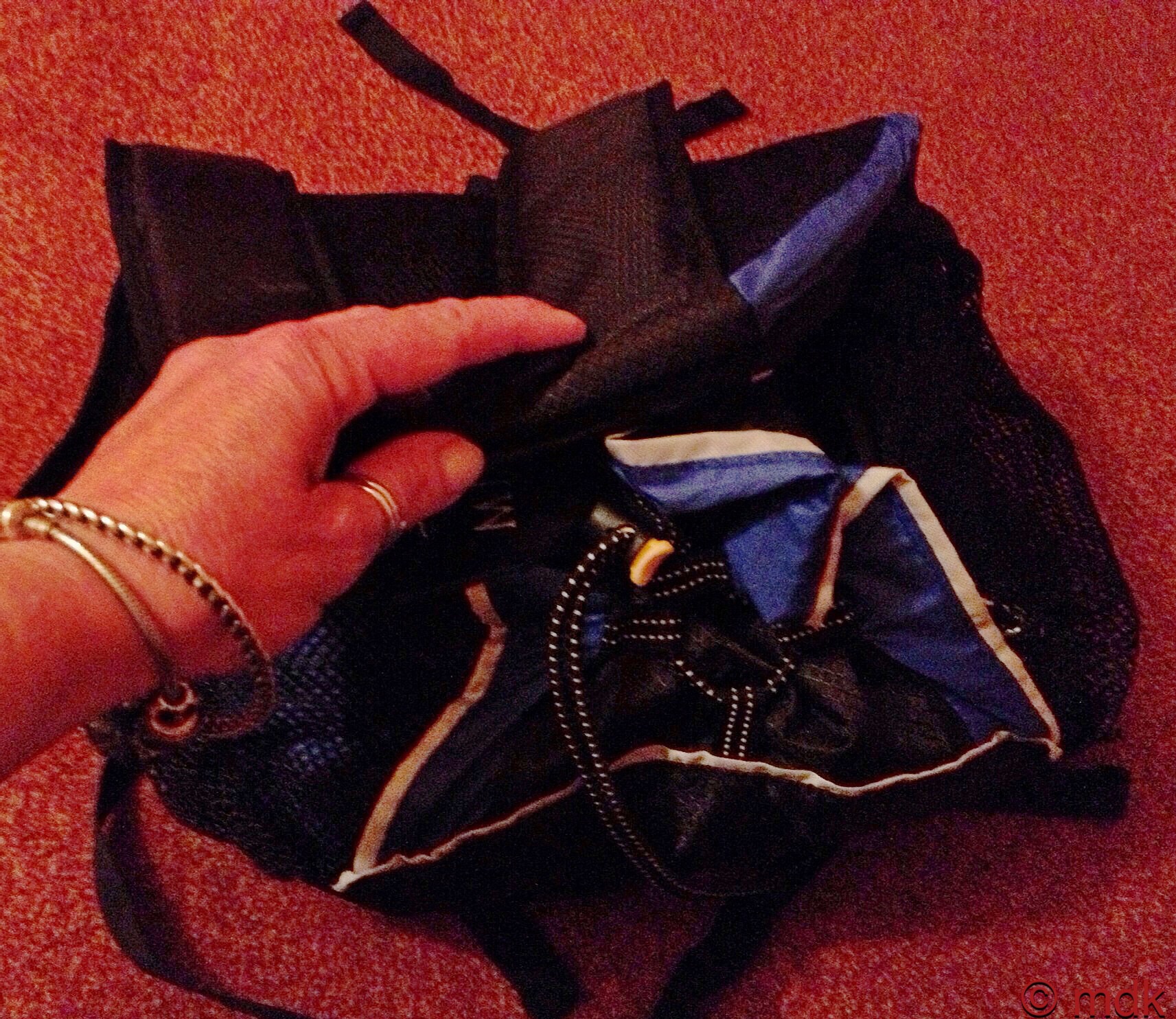 Even more important than snacks is water. If you are going to finish the walk you really have to be properly hydrated. There are water stations on the Moonwalk course where they hand out bottles but I shall have my Camelback strapped round my waist and sip as I walk. Better to be prepared than need a drink and be nowhere near a water station I think.

Obviously drinking water means needing to go to the loo and one thing I learned the first time is that there are massive queues for the loos. At the first one I waited twnety minutes. Given how often I need to go it is possible I’d still be walking now of I hadn’t worked out that bushes make very good toilets. Yes I know it’s not very lady like and not recommended by the Walk the Walk people, plus London probably smelt a bit whiffy the next day with ten thousand women peeing behind every available bush but needs must.

They do sell things called shwee or something like that, that allow you to pee standing up. This seems like a wonderful idea but I haven’t tried one so I’m not sure if it would work or just result in wet trousers. Personally I will be sticking to the easily pulled down leggings and squat method that I’ve been using on my long training walks. I’m way past being embarrassed these days, no shame left whatsoever.

Other essentials for the rucksack are a teeny tiny purse with a few pound coins (just in case someone decides to open Costa, Pret or Starbucks in the early hours and make a small fortune), blister plasters (goes without saying), Burts Bees lip balm, some headache tablets (might work on the knee too if it starts playing up) and spare socks.

That little lot sounds like it would fill a huge rucksack but actually is is all lightweight and surprisingly small when packed. Most importantly, it weighs next to nothing and I hardly feel it when I have it on. If you are looking for a rucksack make sure it’s very lightweight when empty, has thick padded straps, a tie at the waist to stop it bobbing about when you walk and all the straps and things are adjustable. Most important, walk with it, and not just a couple of miles.

If you are doing the Moonwalk on May 11, or any other night for that matter, well done for your commitment to what has certainly been a long hard training period. Have a great night, don’t worry too much about time because it really isn’t a race it’s about getting round however long that takes. If you see a shortish blonde woman in glasses with a fluorescent pink Moonwalk beanie, a rucksack and a very badly decorated bra come and say hello because that will be me! Most of all GOOD LUCK!