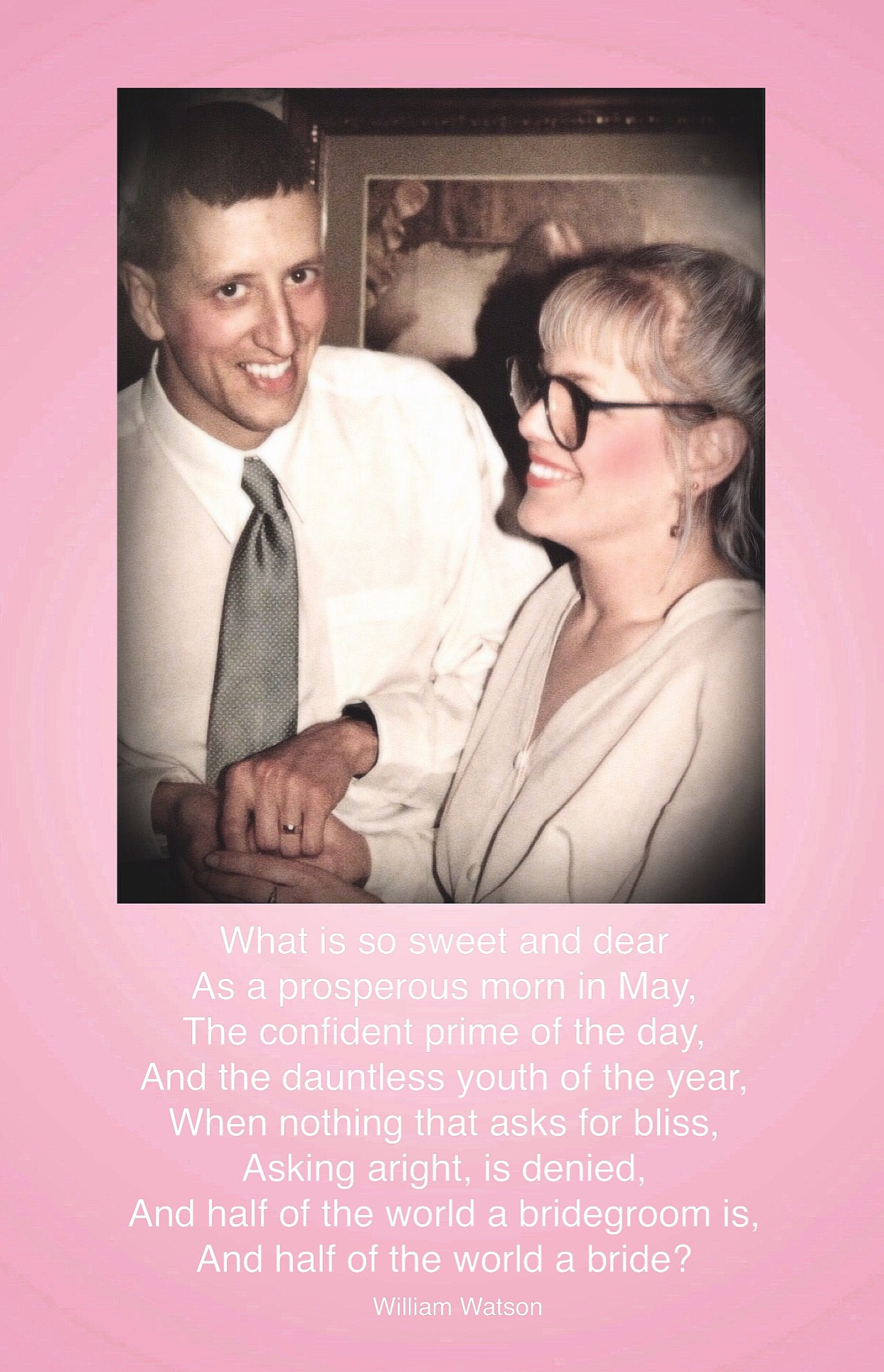 In our house May begins with celebrations and the first of those is on the first day of the month. May Day was the day Commando and I got married, although work meant we wouldn’t be spending much time together on our anniversary. Then, the very next day was my birthday, and time for more chocolatey celebrations.

May begins with my wedding anniversary. Commando and I have been married for more years than either of us care to admit to. It is also May Day which in French means help me, possibly what was going through Commando’s mind on that far off day. For us it is a day of celebrating our marriage but May Day has traditionally been a day of celebration all over the world. In ancient times the Romans held the festival of Flora, the Goddess of flowers, the Celts the festival of Beltaine and Germanic countries Walpurgis Night. Here in England there were Morris Dancers, Maypoles and May Queens. Even today those traditions are still carried on in some places. Almost every country has a May Day tradition of some kind. In France young men give their loved ones sprigs of Lilly of the Valley to show their love, in Germany it’s a Maypole, placed secretly at the girls house, in America a May basket filled with flowers or treats. In our house it is a card and a small gift, the one I ran around trying to find yesterday.

As if all that wasn’t enough it’s the the thirty seventh anniversary of the day Saints won the FA Cup. For me though it will always be the day I made the best decision of my life, marrying Commando. Unfortunately we both had to work so the sum total of our time together was five minutes this morning (when he was tired and I wasn’t quite awake) and half an hour this evening when he was getting ready for work and I’d just got in after a hard day. Never mind though, we will make up for it at the weekend.

Because the new COO was spending his first day in the office I wanted to get in early so I caught the bus. This time I did at least get a walk through the parks. The little enchanted garden is a riot of colour right now, camellias, azalieas, snowy mespilus, daffodils and, of course, rhododendrons. All the normal rhododendrons are now flowering and very beautiful they are too but what of the one little rhododendron that has been soldiering on all through the winter when the others were sleeping? Well it may not be a mass of showy flowers like the others but the big fat bud I saw last time I walked this way has burst into the best head of delicate pink flowers I’ve seen so far, very strange as, all through the winter it’s blooms were far darker. It really is a magical little thing. 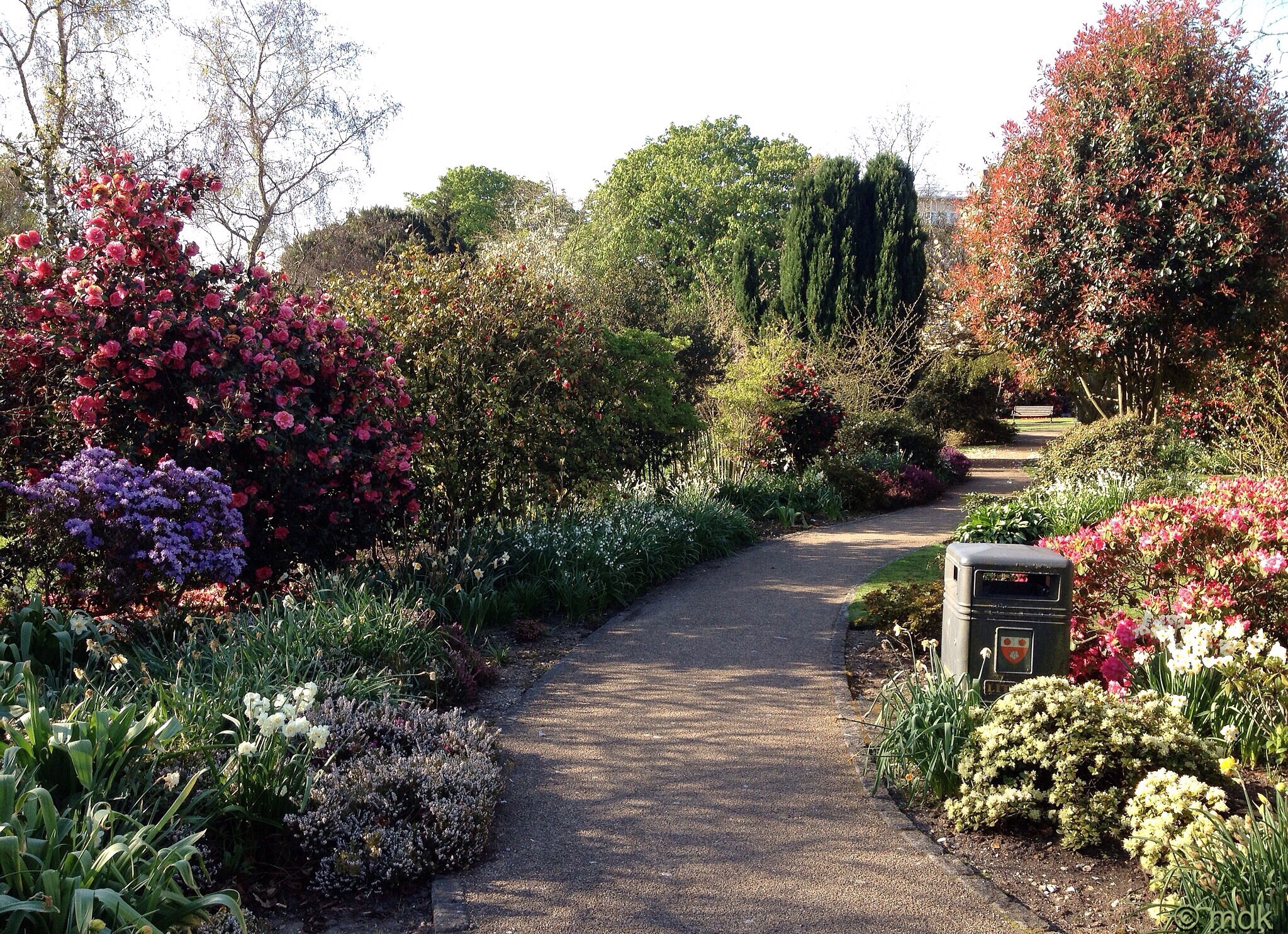 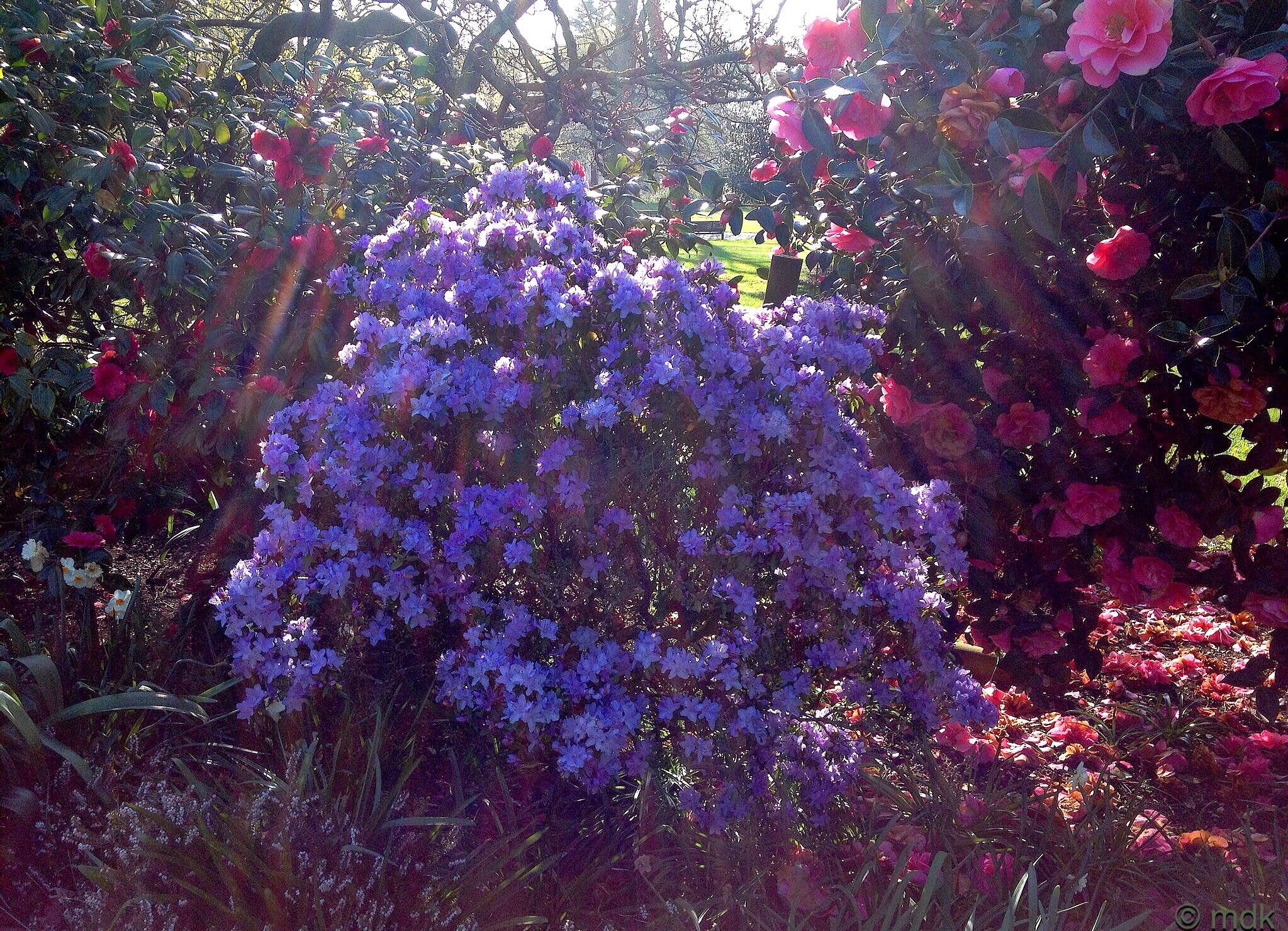 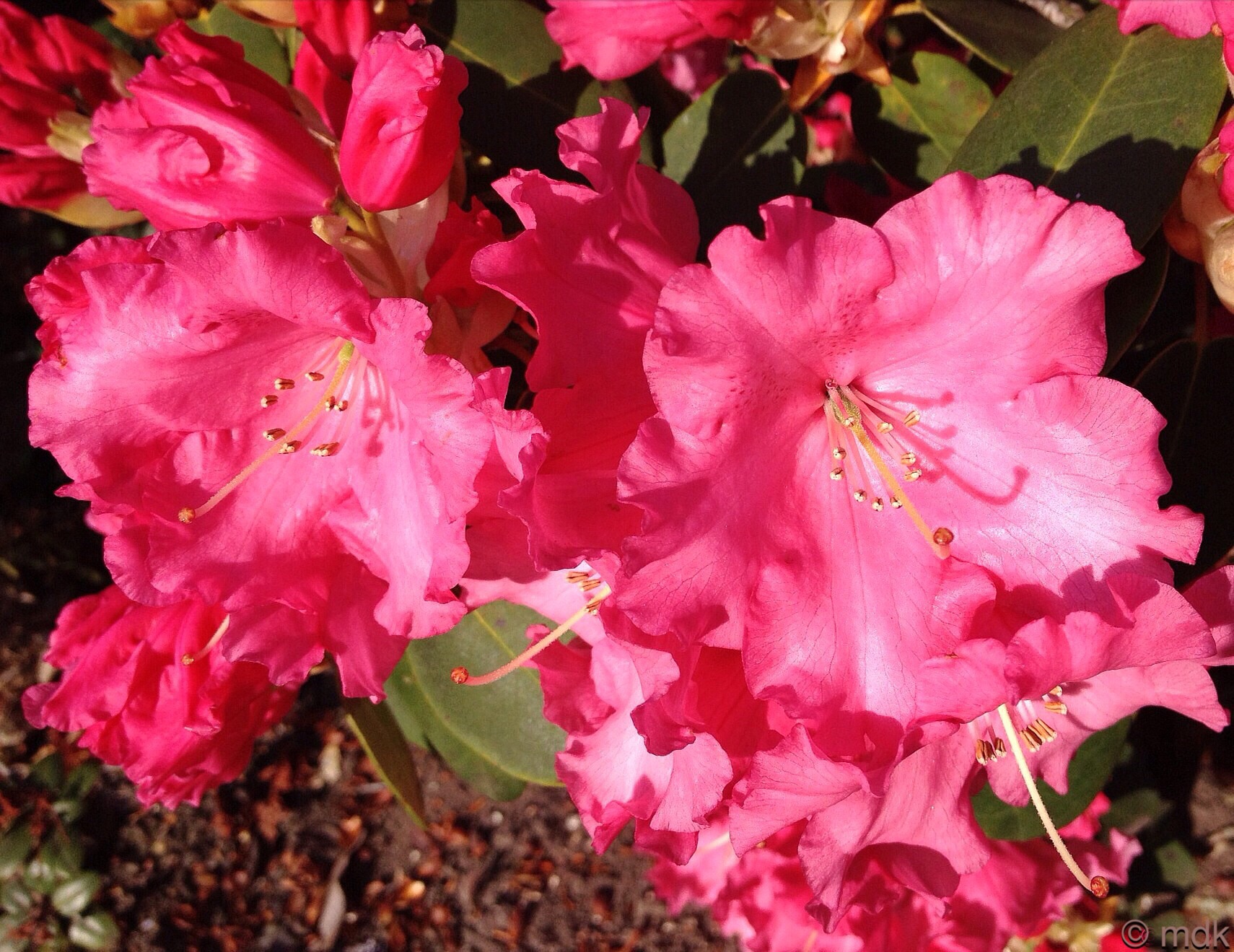 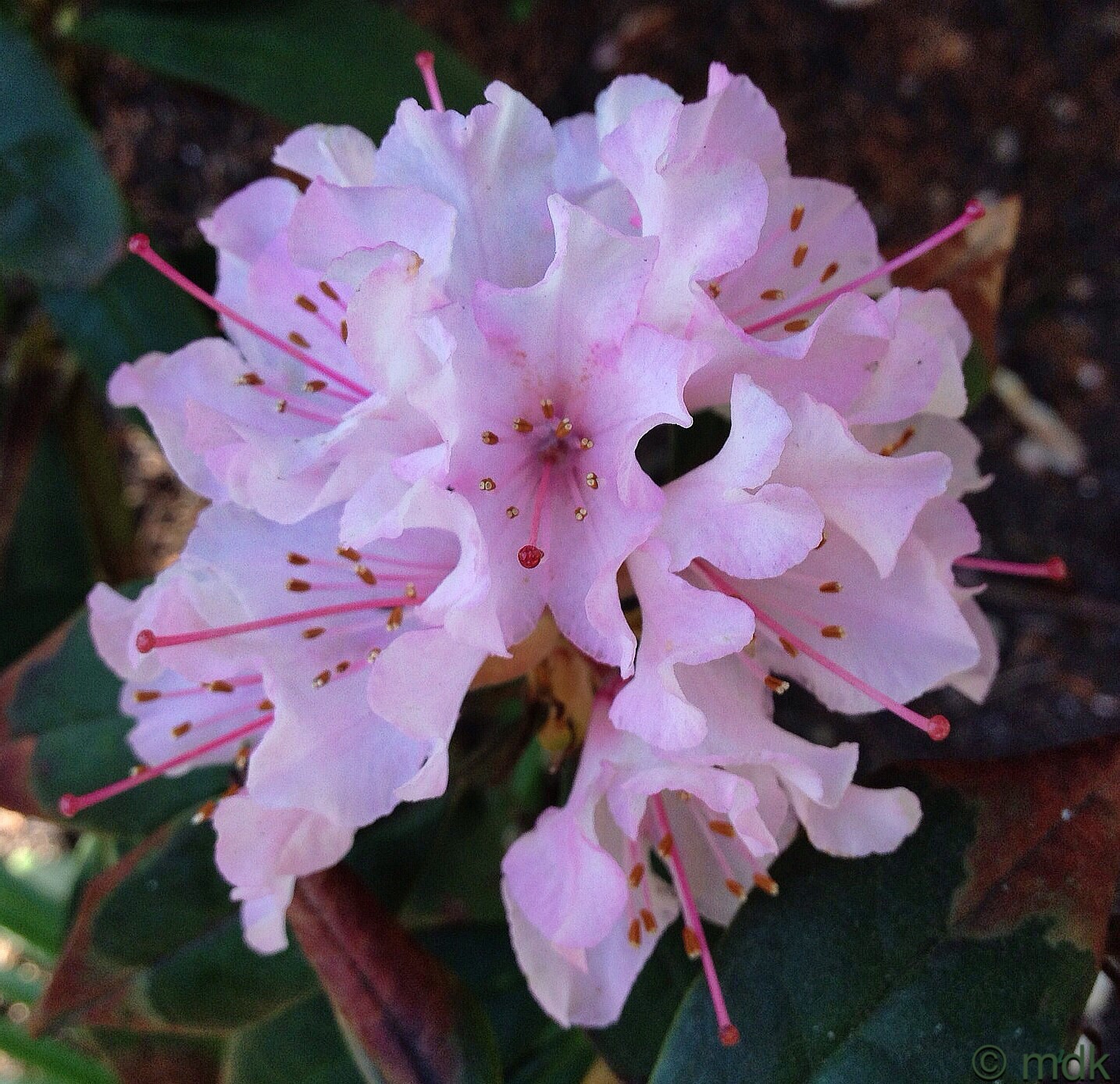 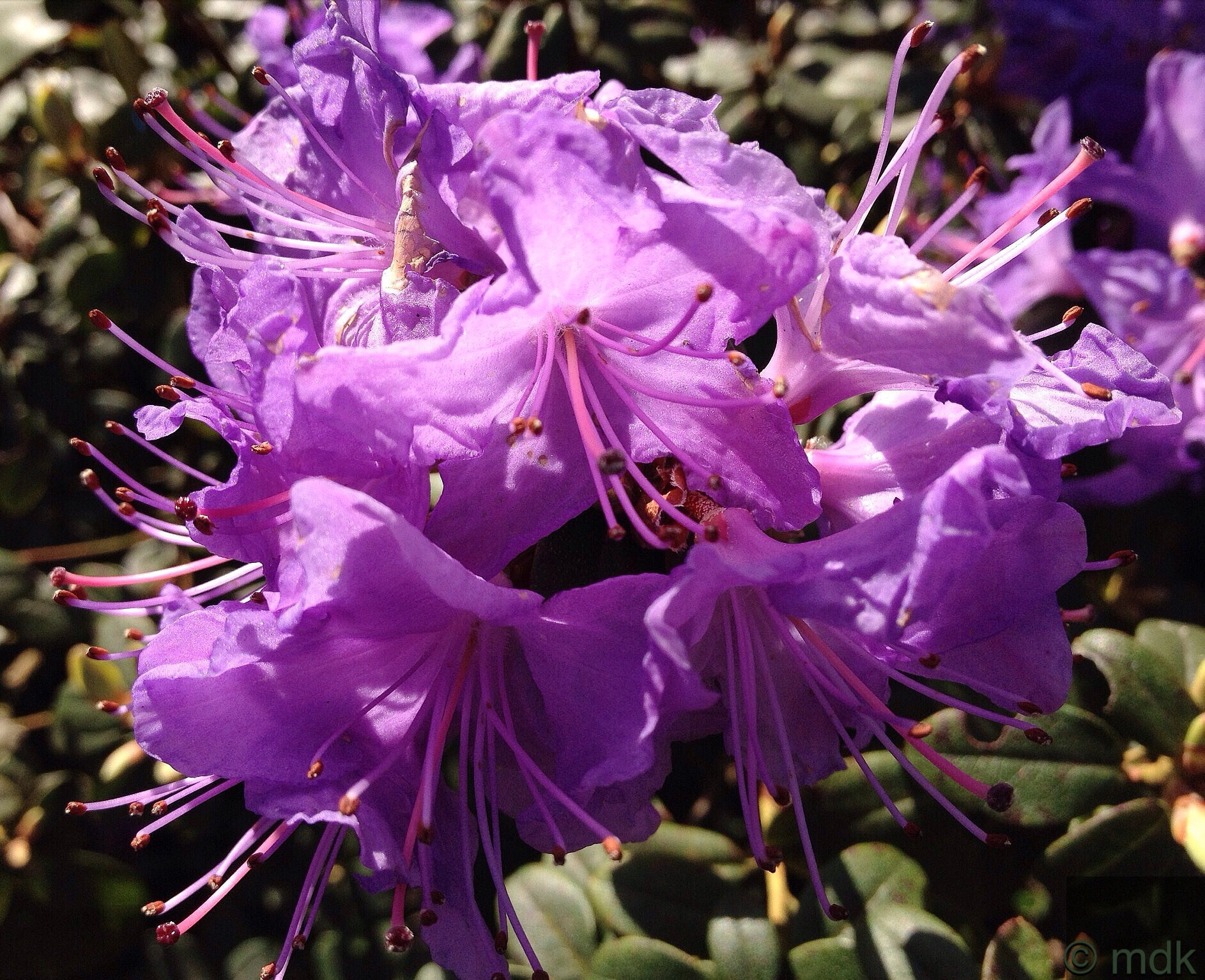 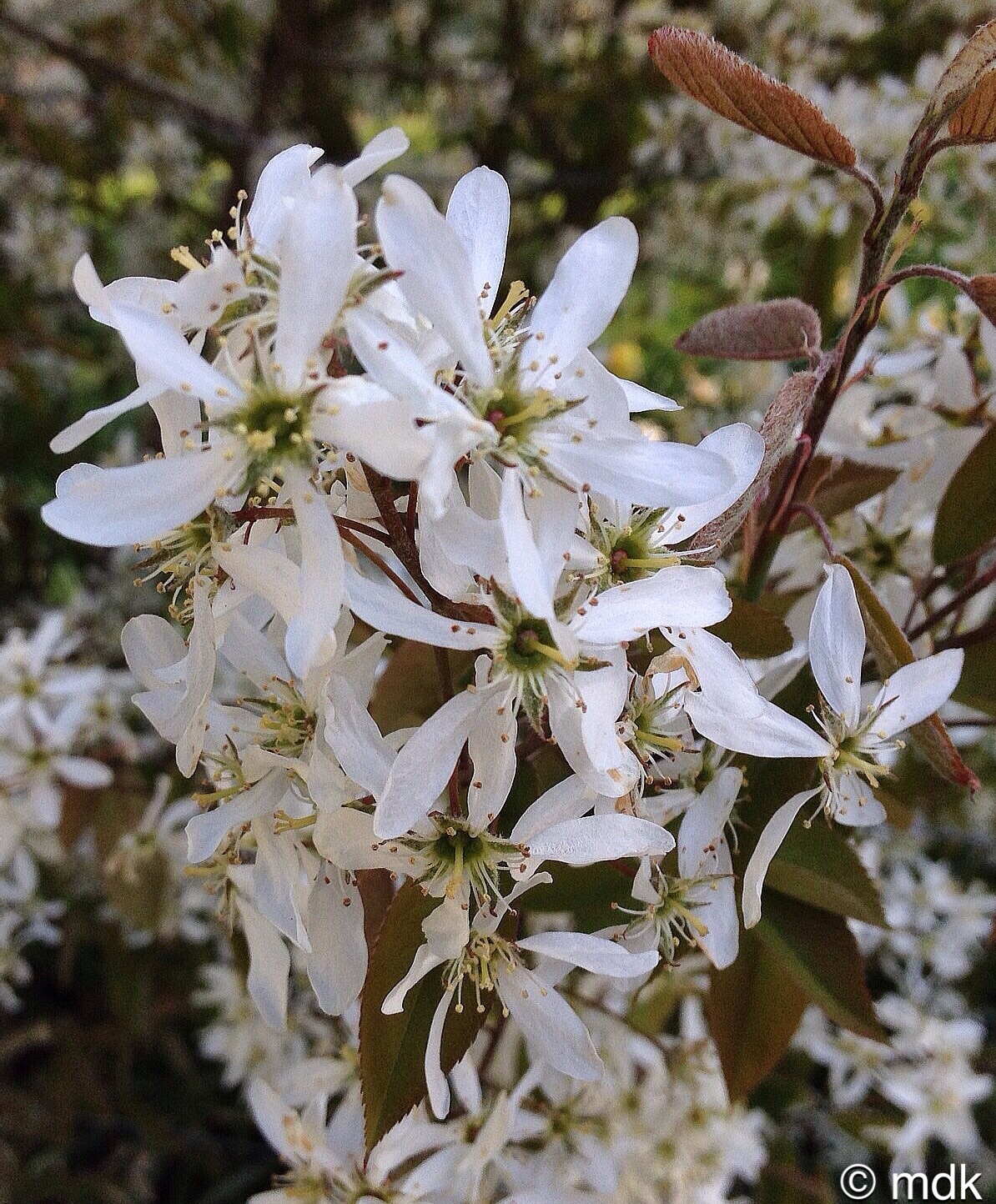 The new COO, the old COO and the CEO all turned up just after nine so I was glad I got in early and was hard at work when they strolled in. They ensconced themselves in the office for most of the morning which at least allowed me to get some of the work in the humongous pile done. Then, just as Alice and I were about to go to lunch, the old COO came out and asked if we would get some snandwiches. Good job I was planning on a trip to the Tesco Express in town to get some salad veg for my birthday dinner tomorrow really then.

In the middle of the afternoon I had my meeting with the new COO. Thankfully the CEO and the old COO had gone by then or I might have felt a little outnumbered. He seems quite nice although he’s new to the cruise industry and our little niche market. He asked a lot of questions about entertainers, the films, the on board shop. I’m pretty sure he has changes in mind but he has a meeting with Arabella tomorrow so I’m sure she will tell him far more than I could.

Because I wanted to get a few things finished off I did leave a little late and because I wanted to spend some time with Commando on our special day I did get the bus home. Still I think I’ve done a fair bit of walking recently so I suppose one day won’t hurt.

The second day of May is my birthday. It didn’t start too well because I forgot to set the alarm so got up late. Don’t you just hate when that happens, loads of rushing around in a panic. There were cards and presents waiting for me but I wanted to leave them for the evening and open them when Commando and CJ were both there, it doesn’t seem the same sitting there on my own, besides I didn’t really have time.

I was going to treat myself to a bus ride to work so I could leave a bit later, even though I’ve had my share of those this week. Then Gigi rescued me by texting to say she was walking to work and would I walk with her so that was that, we were walking. The day was glorious and bright but with a nip still in the air when we set off. We walked and talked about this and that and in no time at all we were at the office.

When we got there the systems were down again. Just what I needed when I had masses to do. So it turned out to be a fairly frustrating morning. With everything I needed to do involving systems one way or another I was at a bit of a loss. I wasn’t the only one, we were all in the same boat. The cavalry, in the form of the IT expert, was on the way but it would be a couple of hours before he even arrived. Arabella did come in but she went straight into the new COO’s office so I couldn’t even go through the outstanding issues with her. In the end we held our pre cruise meeting early, as best we could without being able to print out all the relevant information and without Arabella.

After the meeting, with no sight of the IT hero galloping to the rescue, I went to lunch. It wasn’t as if there was a rush to get back either with nothing much to do when I did. I strolled up to the enchanted park to sit quietly and read through the masses of Facebook messages I’d seen pinging in on my phone all morning. How lovely to have so many people take the trouble to send me birthday messages. 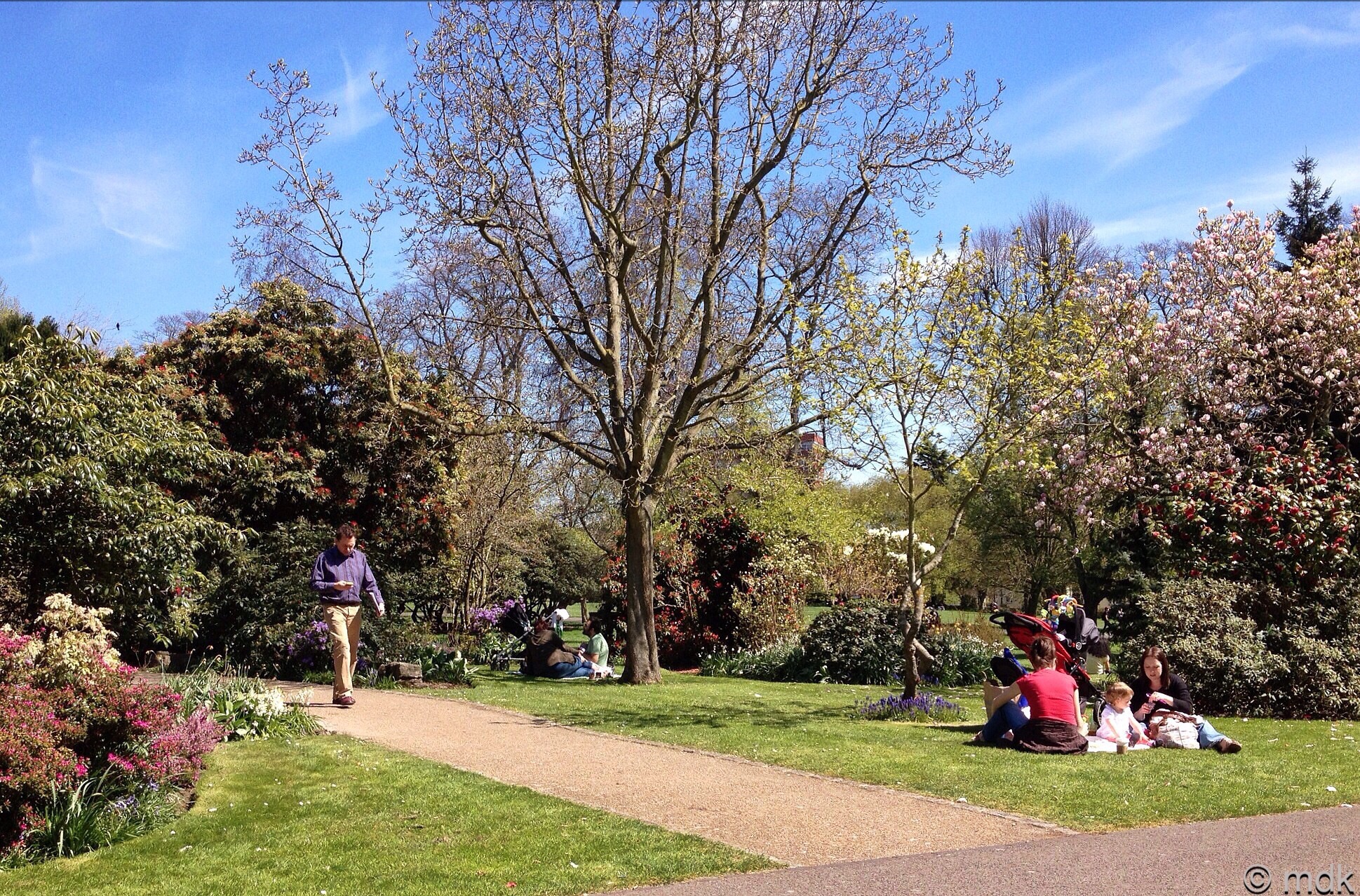 The park was teaming with people, all bought out by the sun. Families with pushchairs sat under almost every tree having impromptu picnics. This was the place to have lunch. It was almost like rush hour with so many people walking through, I was lucky to find an empty bench. Under one tree a couple were actually laying on the grass, the man with his shirt off. It may have been bright but I didn’t think it was warm enough for that, I still had my parka on over my thin dress. 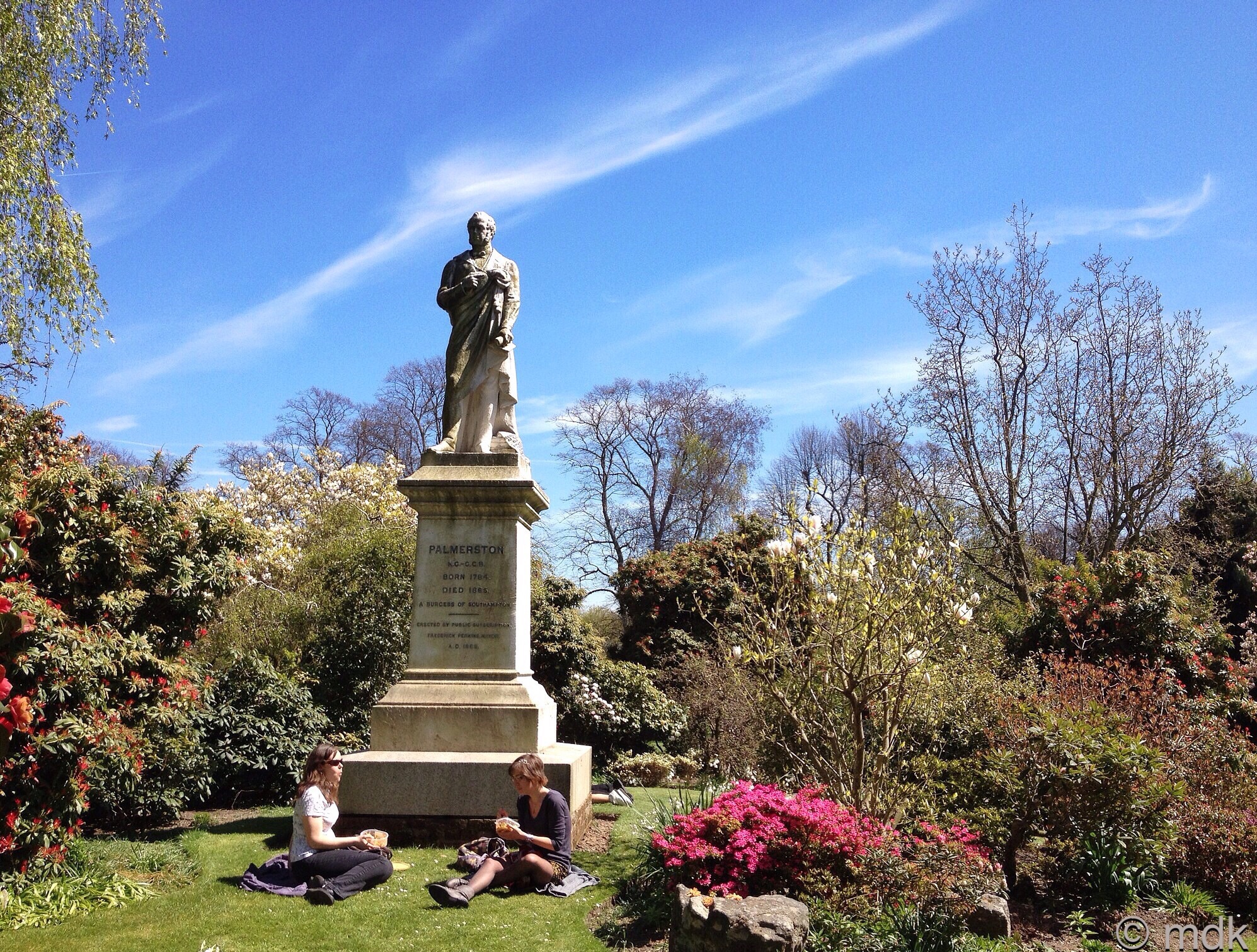 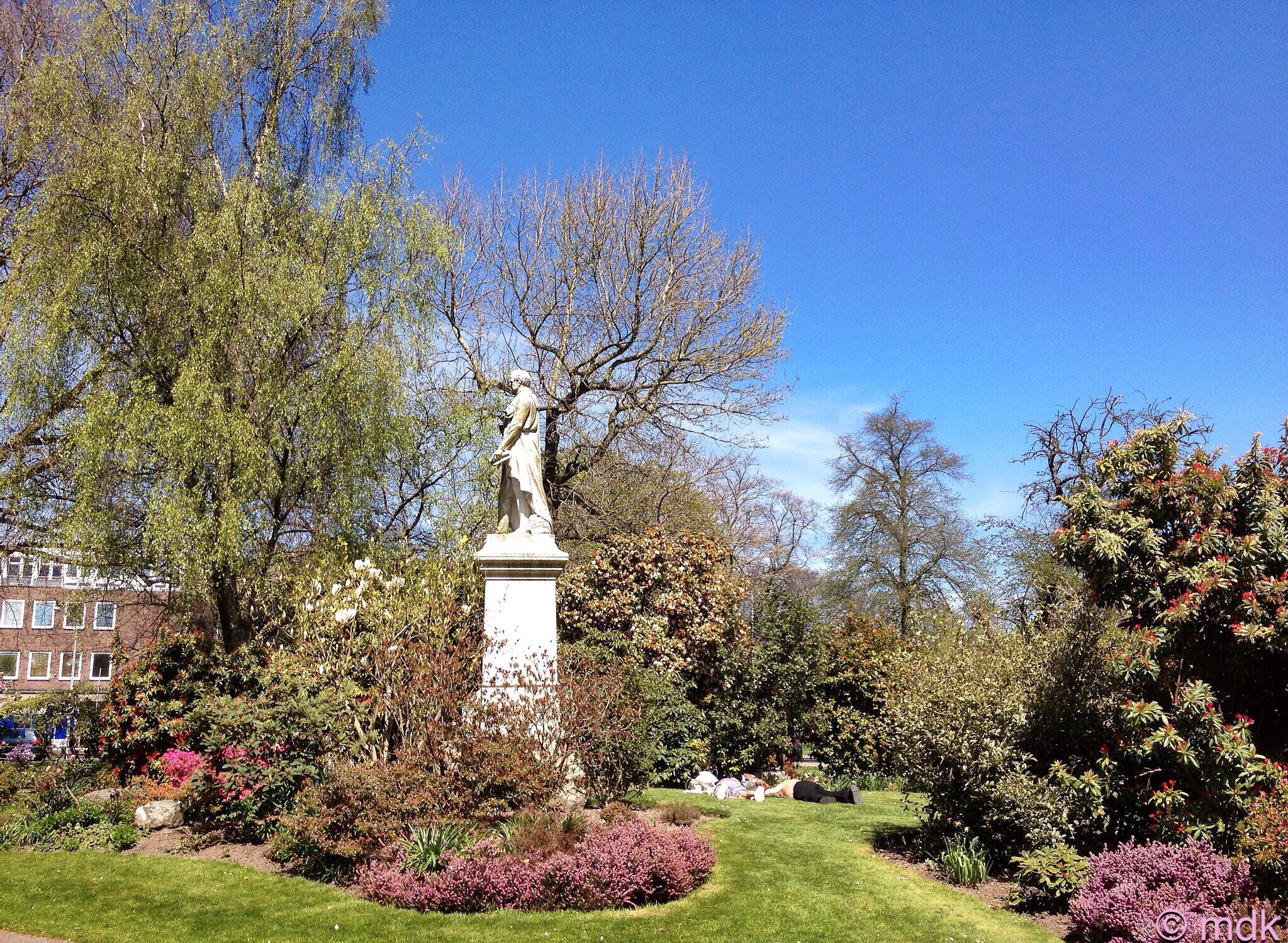 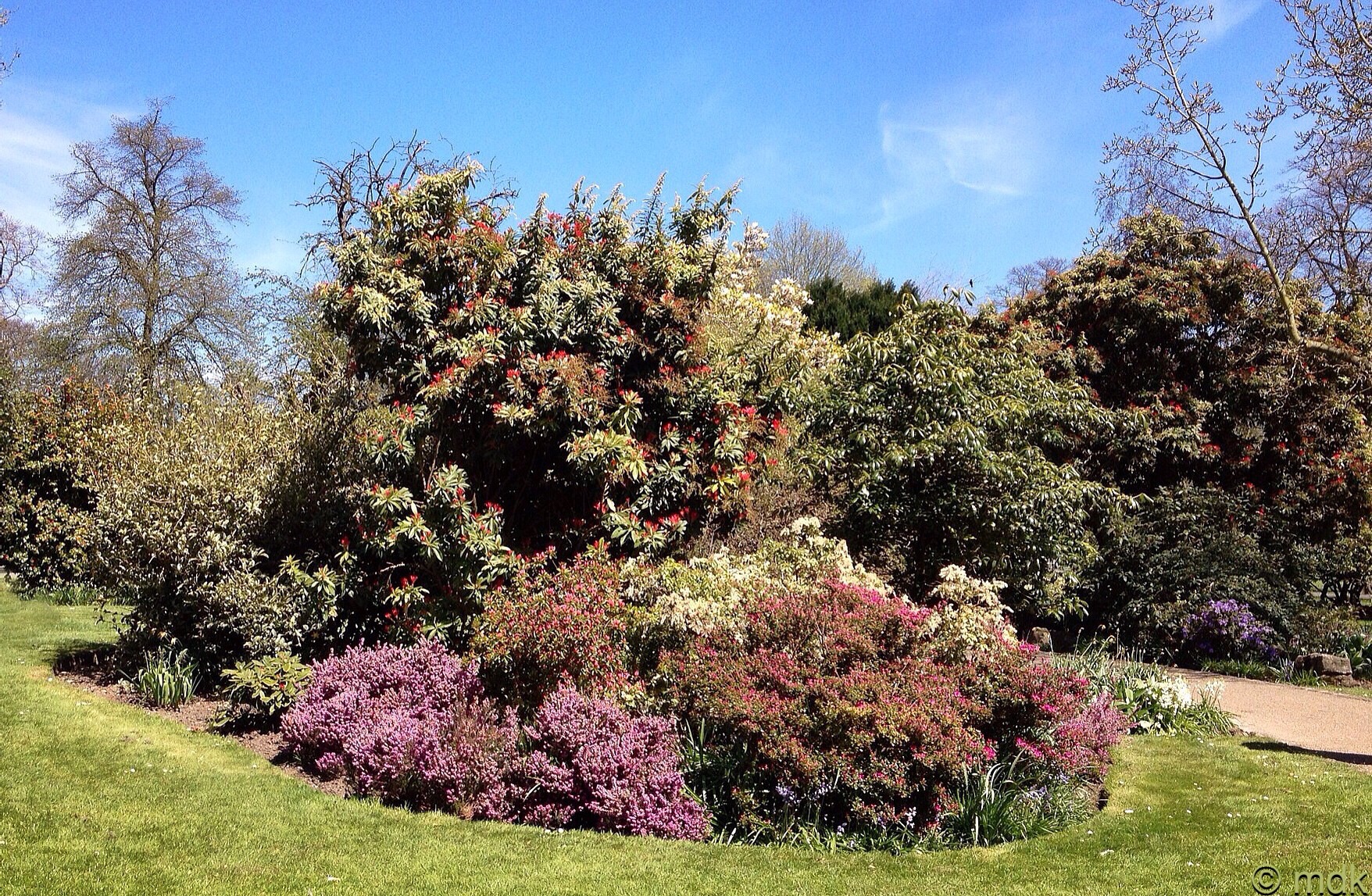 Once I’d read through all my messages I walked up to Above Bar then down through the crowded precinct, dodging swarms of people in various permutations of summer attire. I felt a little overdressed but I was most definitely not overheating so I’m guessing, if I’d looked closely, I’d have seen a fair few goose bumps on bare arms, legs and even midriffs. The most mouth watering smells wafted from the food stalls along the centre of the precinct and I was tempted to forsake my healthy salad wrap and buy something but I didn’t. Instead I went into the Tesco Express picked up three boxes of mini cakes for the office as my birthday treat to my colleagues to thank them for the lovely card they’d all signed. From there I popped into Costa and grabbed a cheeky frappachino in a nod to the lovely weather. Then it was back to the office.

Not long after I got back the IT guru, who had arrived while I was out, announced the systems were back. From then on it was down to business, dashing through as much as I could before Arabella finally took care of all her meetings and we had chance for a catch up. It was four thirty before that happened but we managed to get through all the important stuff before she sent me packing with a “go home now, I’m not keeping you late on your birthday! Go and open your presents and have a lovely weekend.”

While I waited for Gigi to shut her system down I checked my phone. One text from Philo wishing me a happy birthday and saying he’d be down to see me over the weekend. That I’d expected. The other text was more of a surprise, it was from Bard, also wishing me a happy birthday and saying he’d also be down over the weekend. Bard remembering anyone’s birthday is almost a miracle. One year, we arrived at his flat with his birthday presents, to find he’d forgotten it was his birthday! He’s hopeless at remembering these things so I never expect it. Gigi and I took a leisurely stroll home commenting on how hard it was to walk fast now it was warmer. It was so nice that the sun shone down on me for my birthday and, despite the frustrations of the day, I had a lovely time. Everything looks and feels so much better with a little sun. Long may it continue.

At home Commando was out in the garden finishing off the back lawn. There was just time for a quick coffee and a present opening session before he went to work. CJ bought me a lovely soft teddy bear, unprompted apparently. Commando senior has treated me to a starter chocolate course, all the basics of chocolate making! I think I’m going to enjoy that. Commando’s sister sent me some Thornton’s chocolate (there is a theme developing here, I wonder why?) and a book on growing container vegetables. Of course I knew about my hiking shoes from Commando, he could hardly buy them without me there, but he surprised me with a set of scales. These are not just any scales, they measure body fat, muscle, water, BMI and tell you how many calories you need a day. What a lovely family I have and what thoughtful presents.

The final touch to the day was a double chocolate birthday cake. Well it is my birthday! 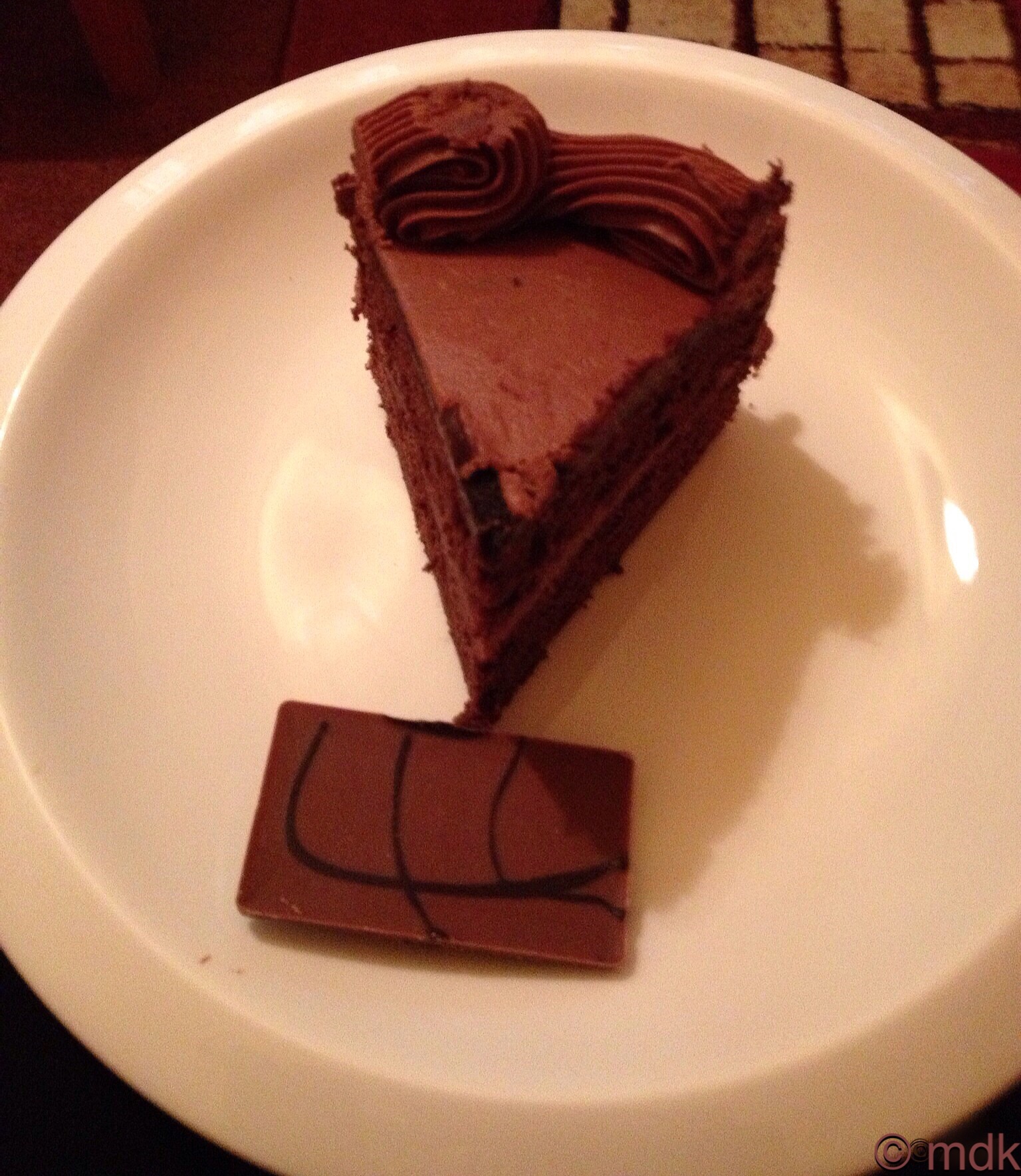