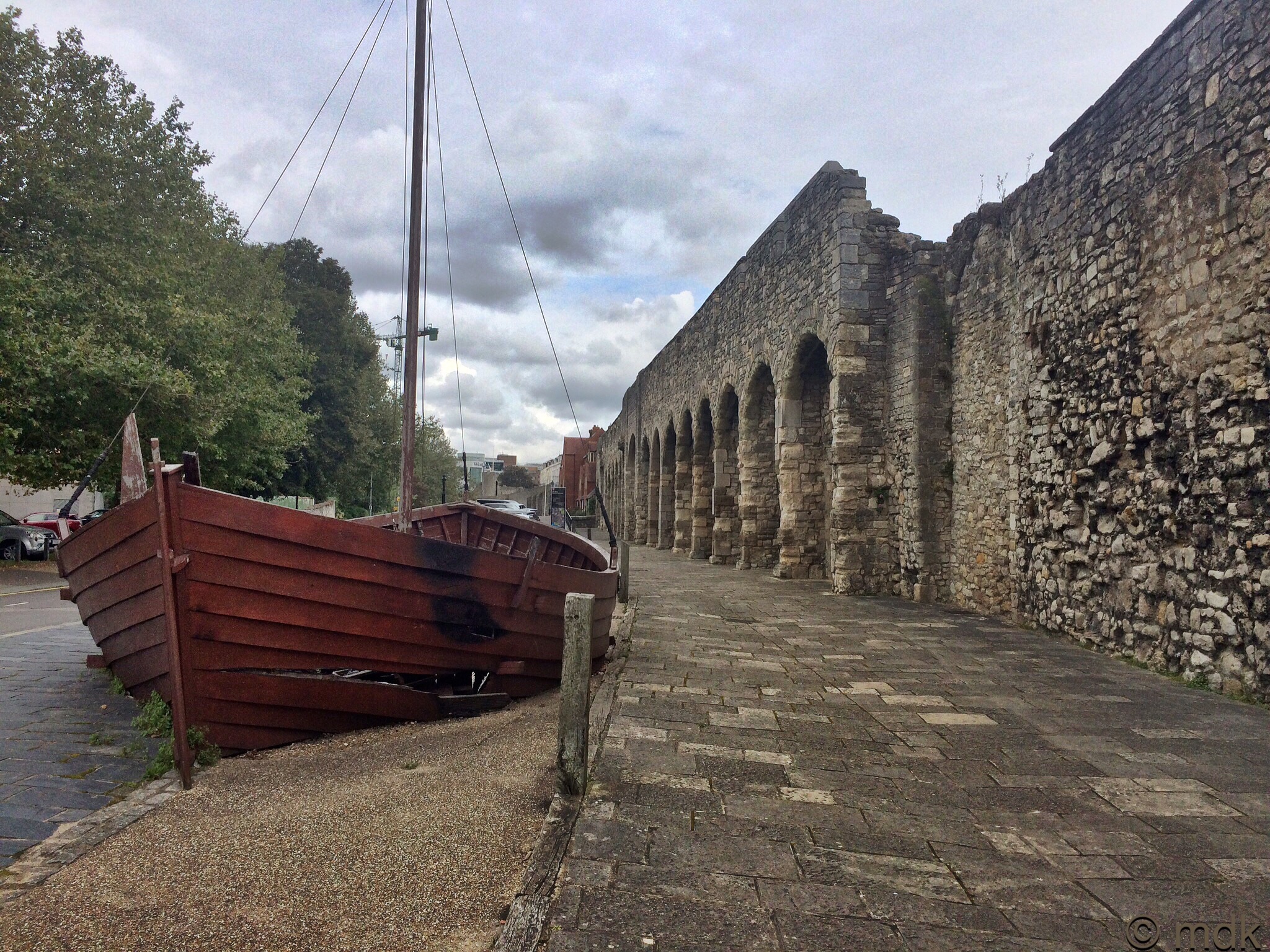 The expensive Boat Show yacht wasn’t the only boat on the street at Western Esplanade. In front of the arcades there’s a replica of a fourteenth century clinker-built cargo boat on the pavement where the tide would have once come up before the land was reclaimed for the docks. Across the road was something I’ve been meaning to have a look at for ages. On the face of it, it seems like an old, fairly unremarkable, red brick wall with grey blue glazed coping. In fact, I must have walked past it thousands of times without noticing its historic secret. 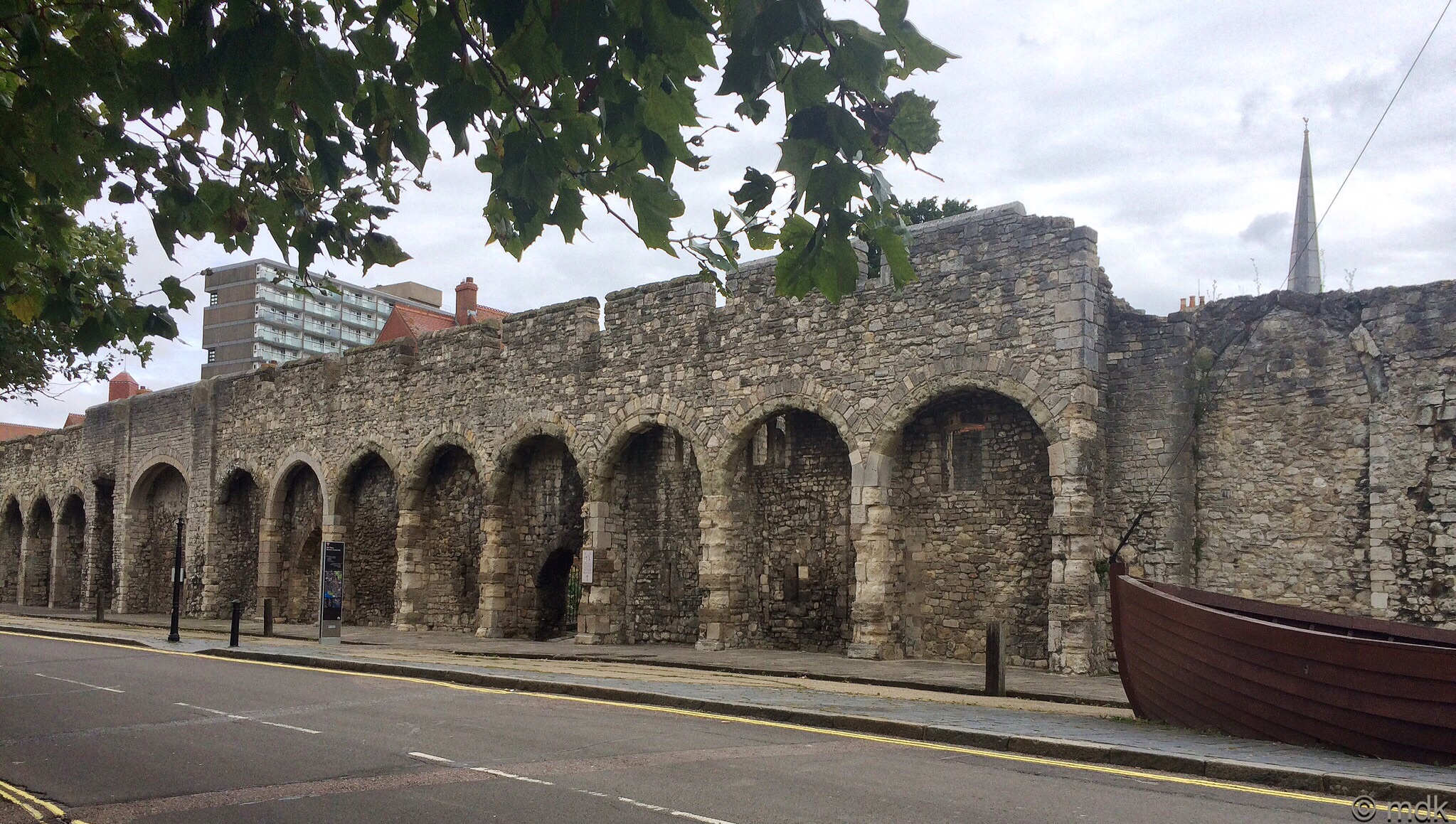 Apparently, back in the 1940’s this was the wall of the Corporation clinic, mortuary and disinfectant station and, although the building itself is long gone, this small section of wall remains. Whether this is by chance or design remains to be seen but scratched into the soft brick are names and dates. This is not just any random graffiti though, these are the names of American soldiers stationed in Southampton during World War II. Back then the streets were often filled with troops waiting to embark. Perhaps their impending embarkation to Europe made them want to leave their mark and this wall, with its soft bricks, close to the docks became a popular place to do so. 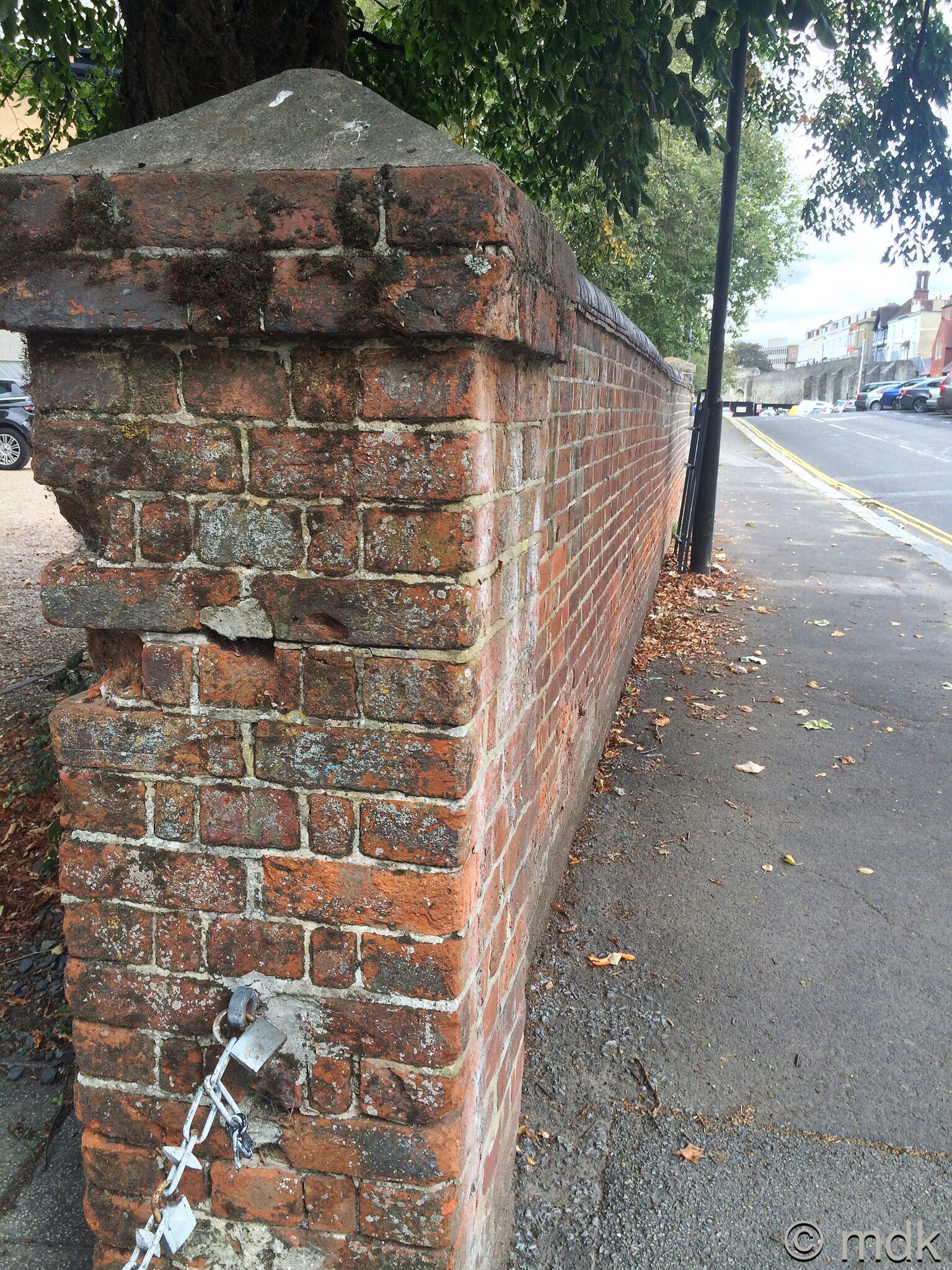 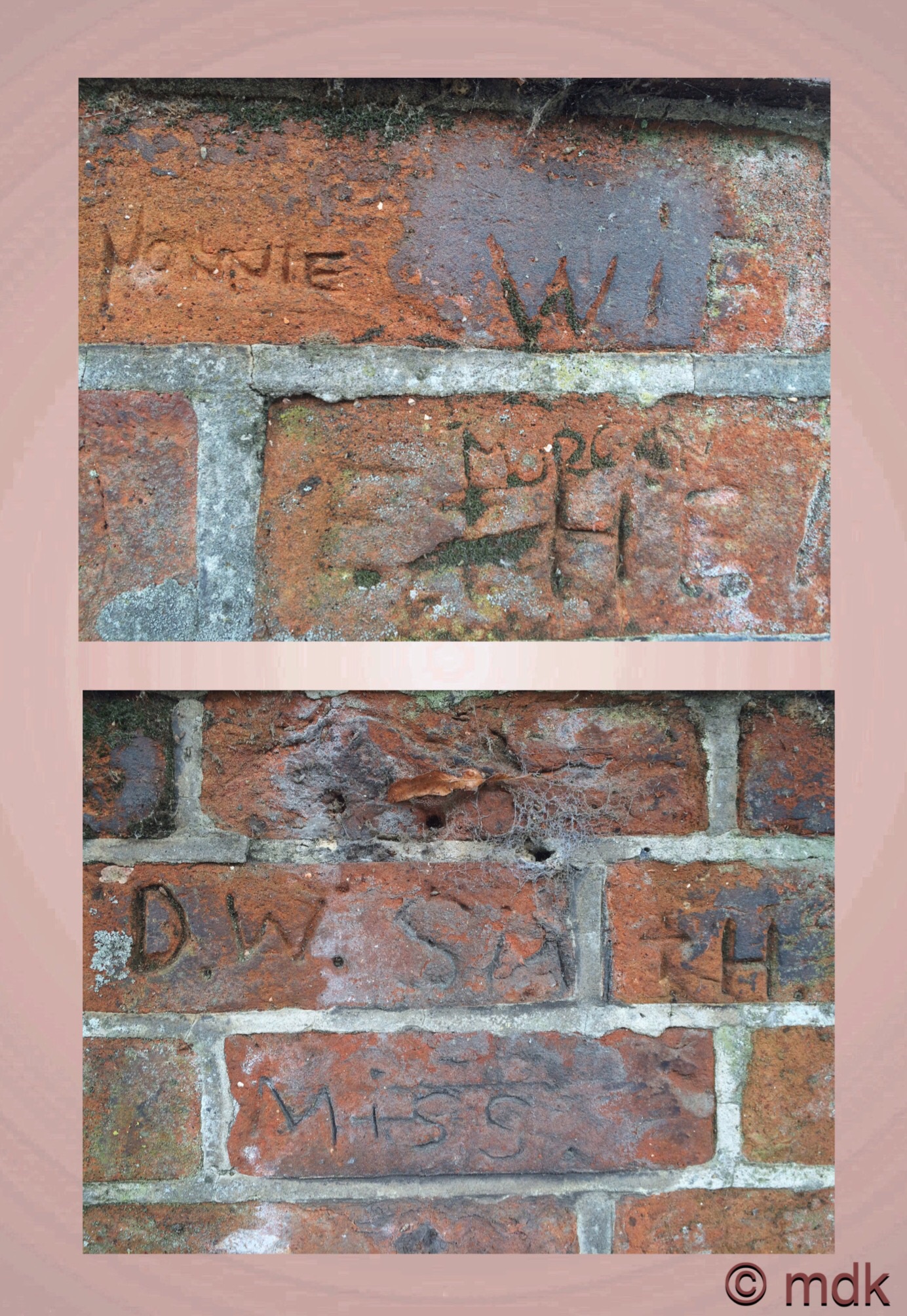 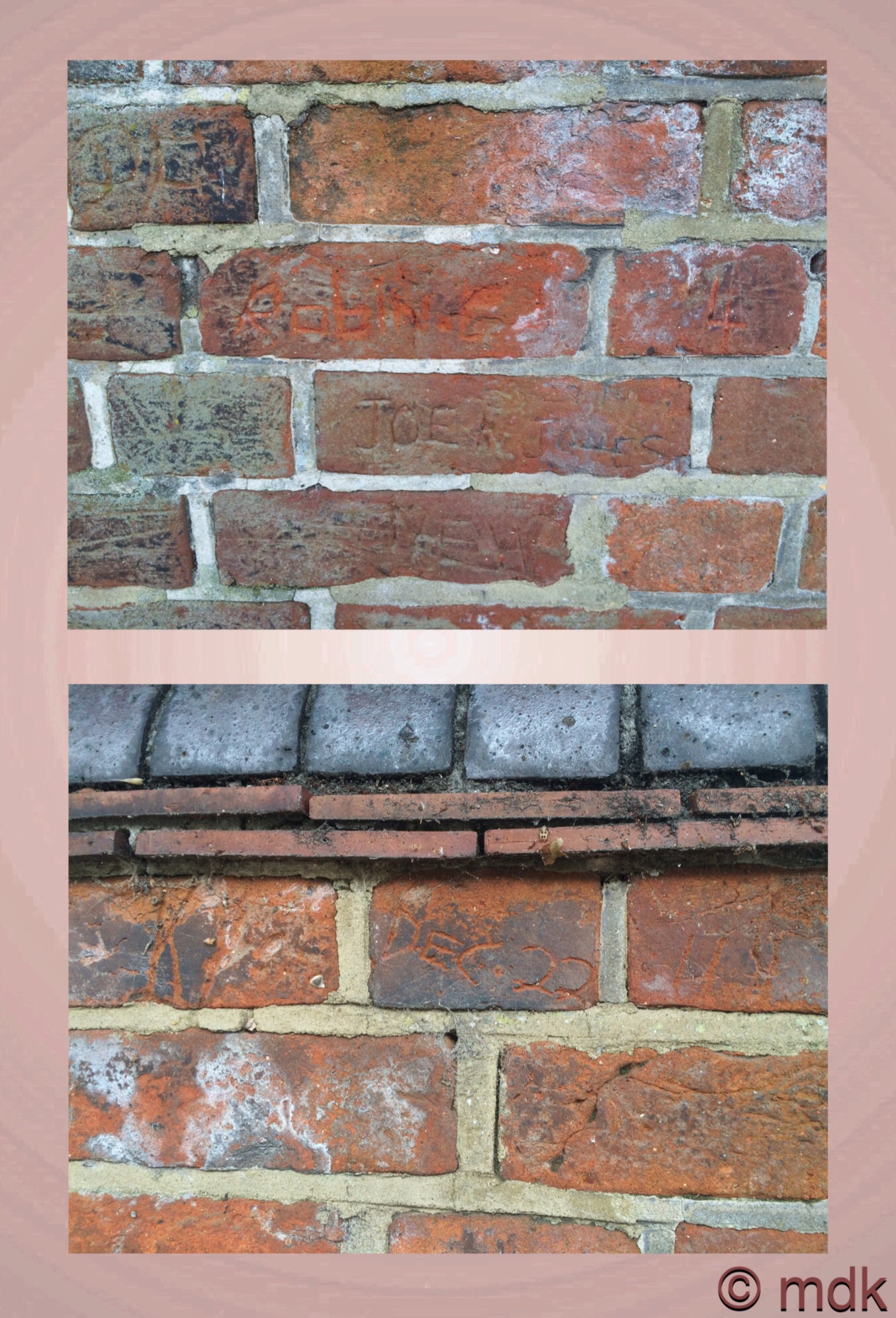 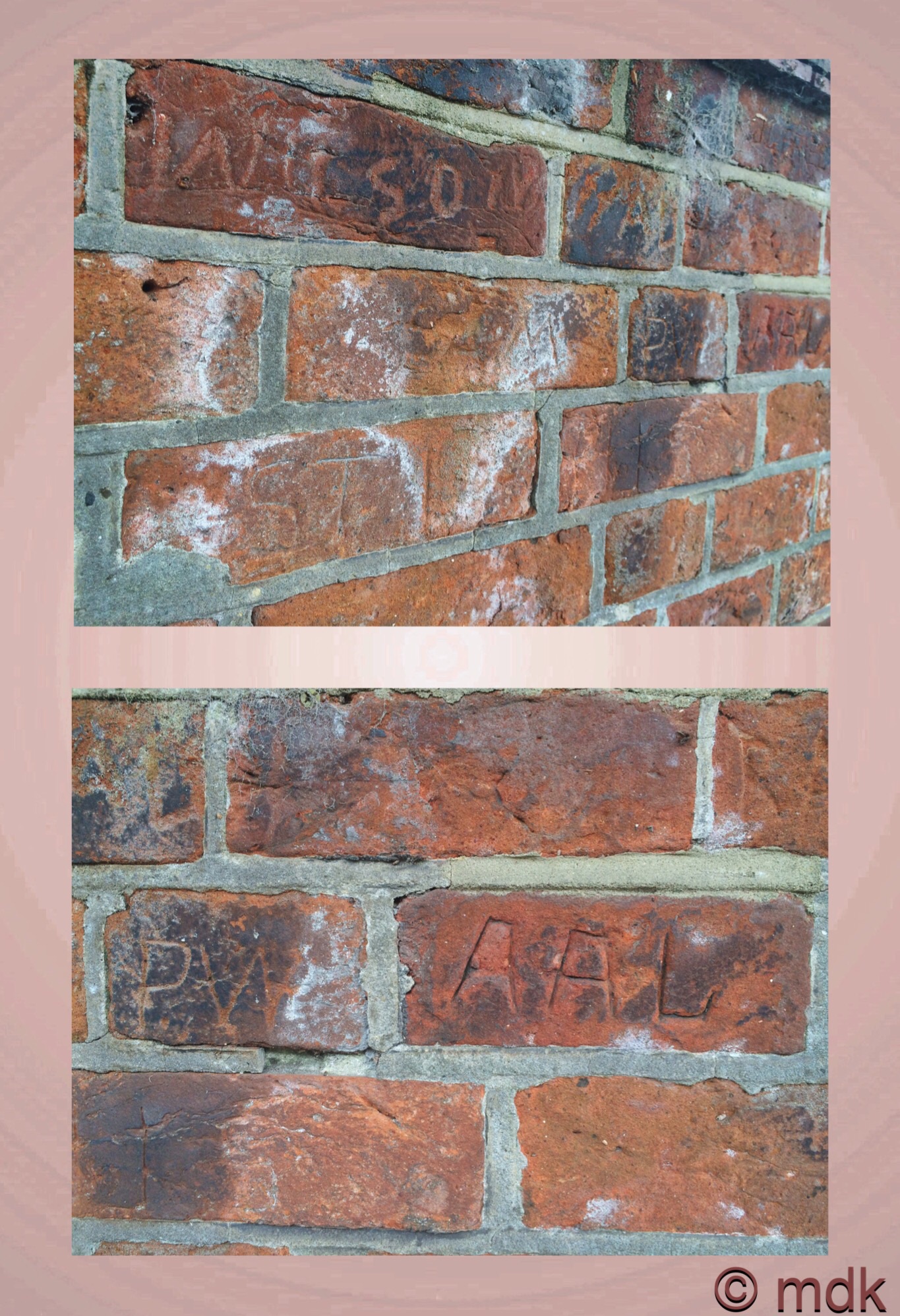 The years and weather have taken a toll on the wall and many of the names are indistinct, some have, undoubtedly, gone for good but others stand out clearly. It seems a shame that it’s hidden away and unprotected as this graffiti may be the last thing some of these men ever wrote. For a long time I stood there peering at the names and wondering what became of the men who wrote them. Did any survive, if they did, did they even remember this place and this wall amongst all that came after? For those who never came home would it be of some comfort to their families to know this little corner of a foreign town still bore their names? 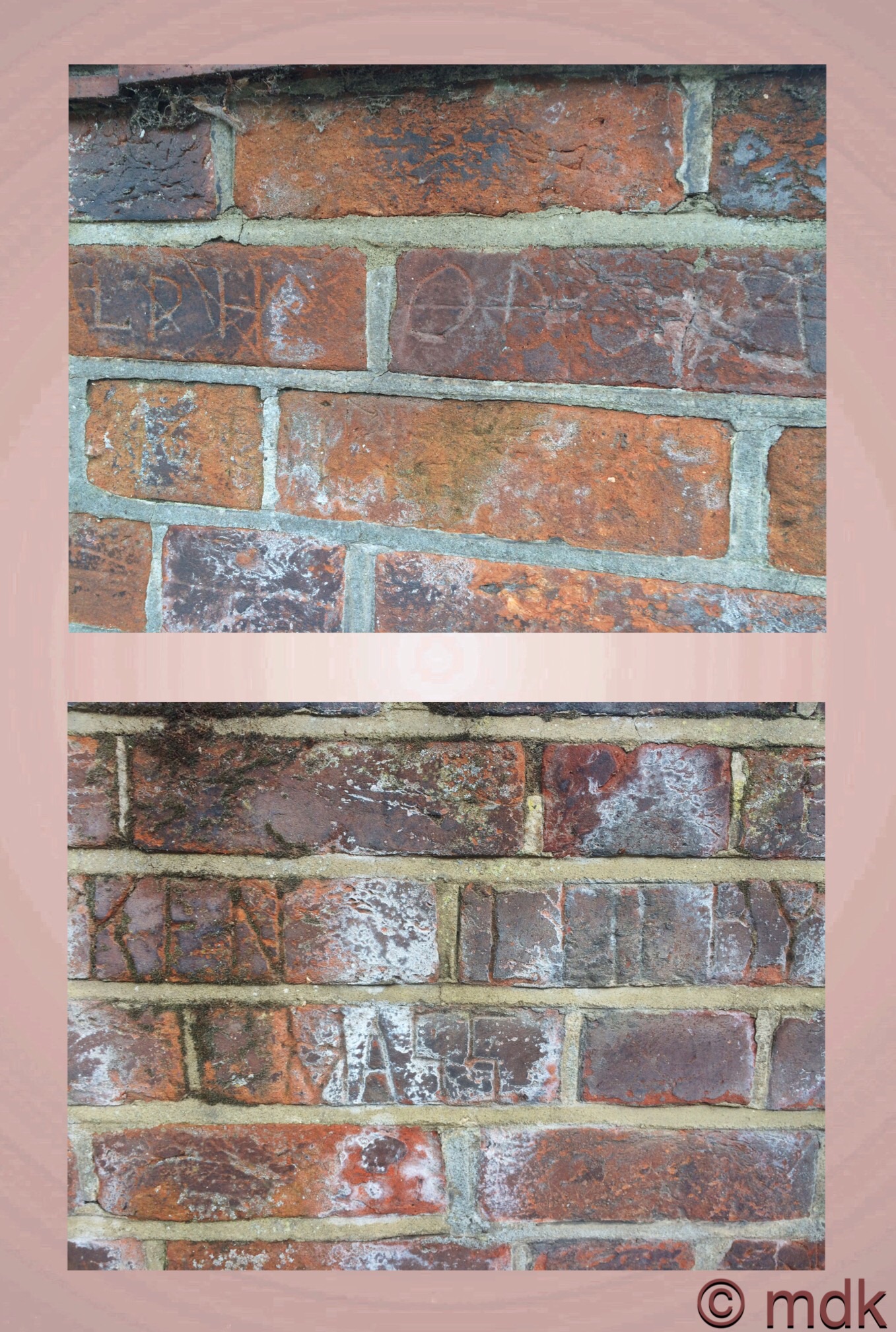 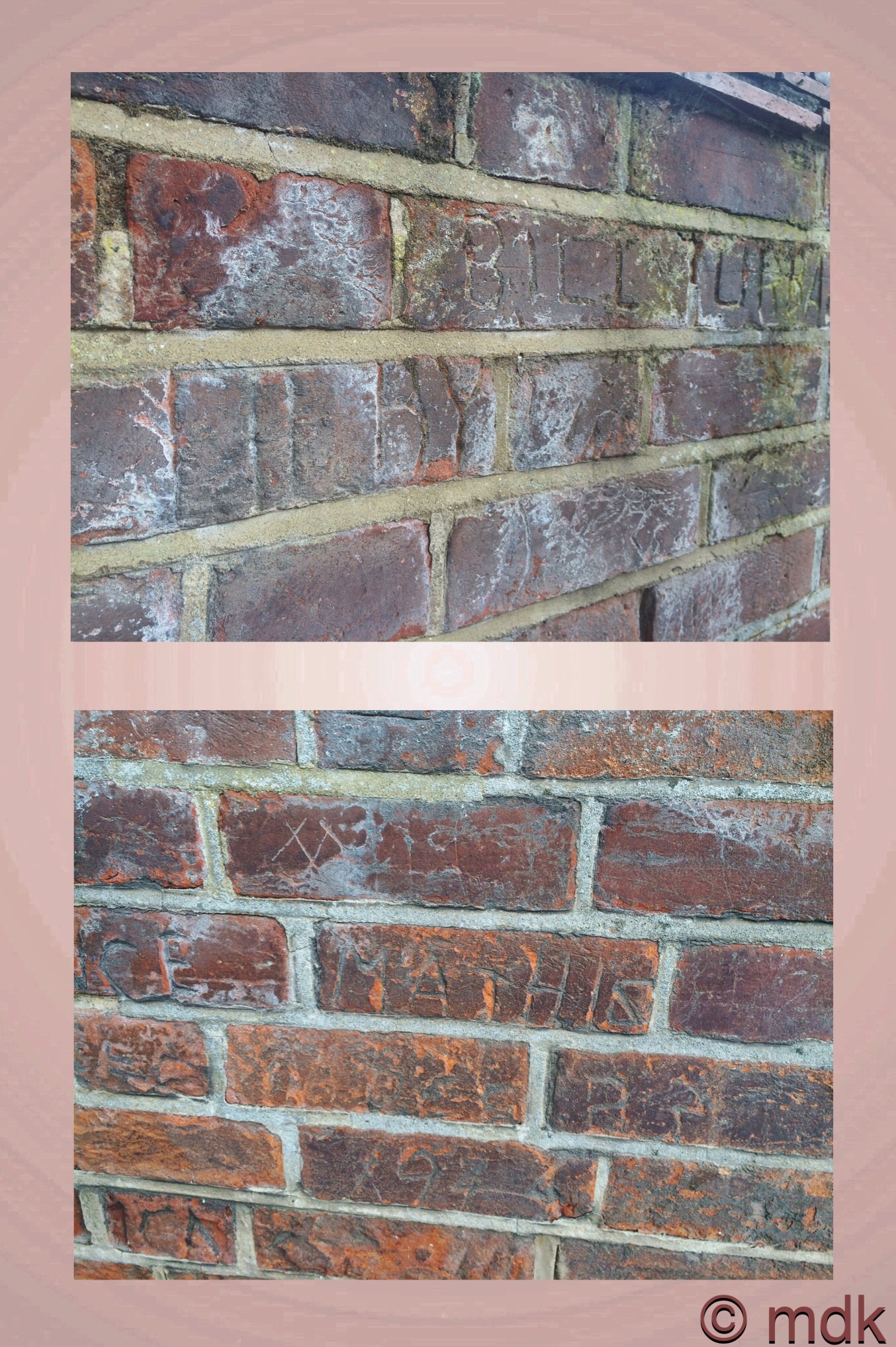 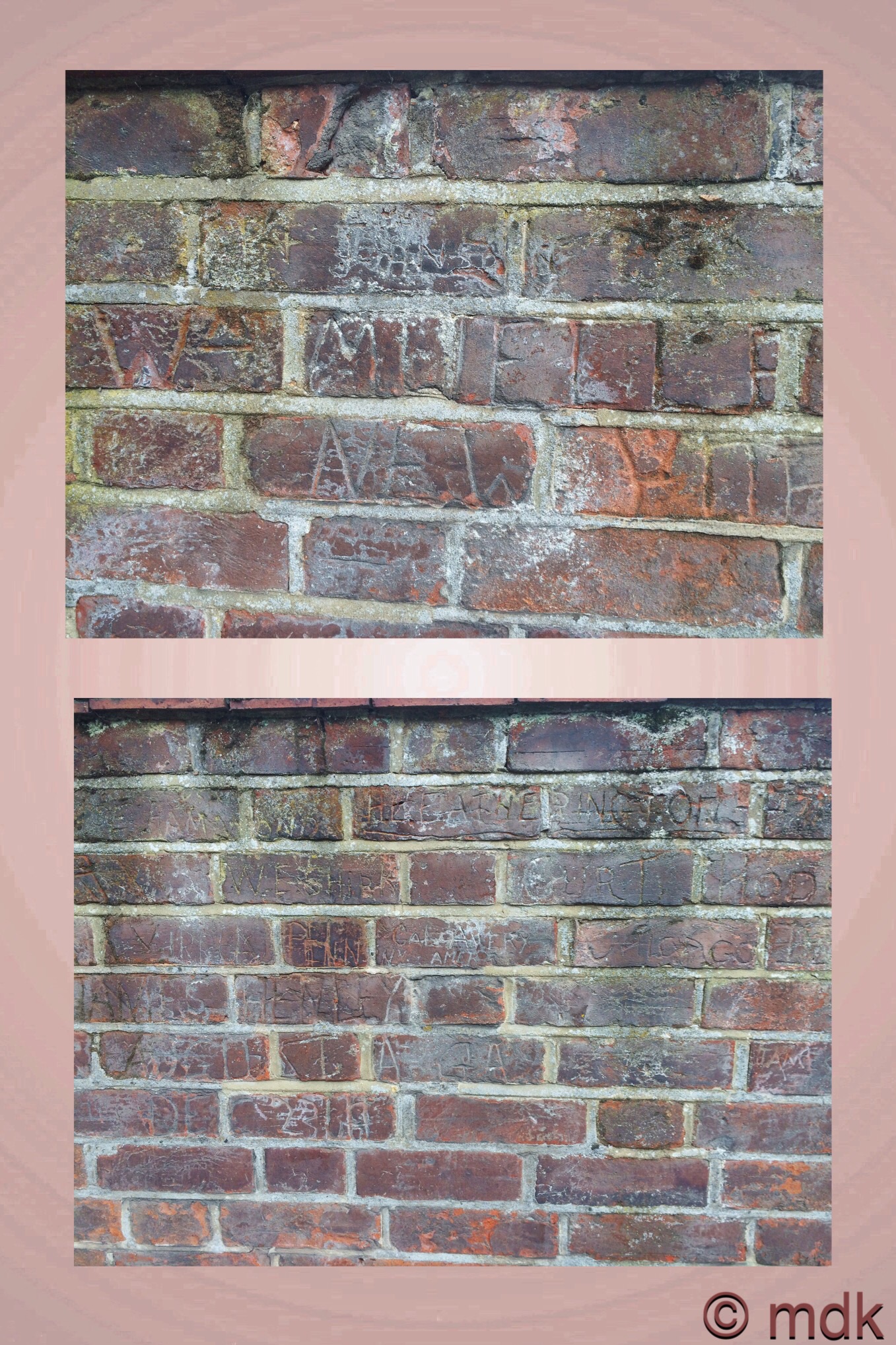 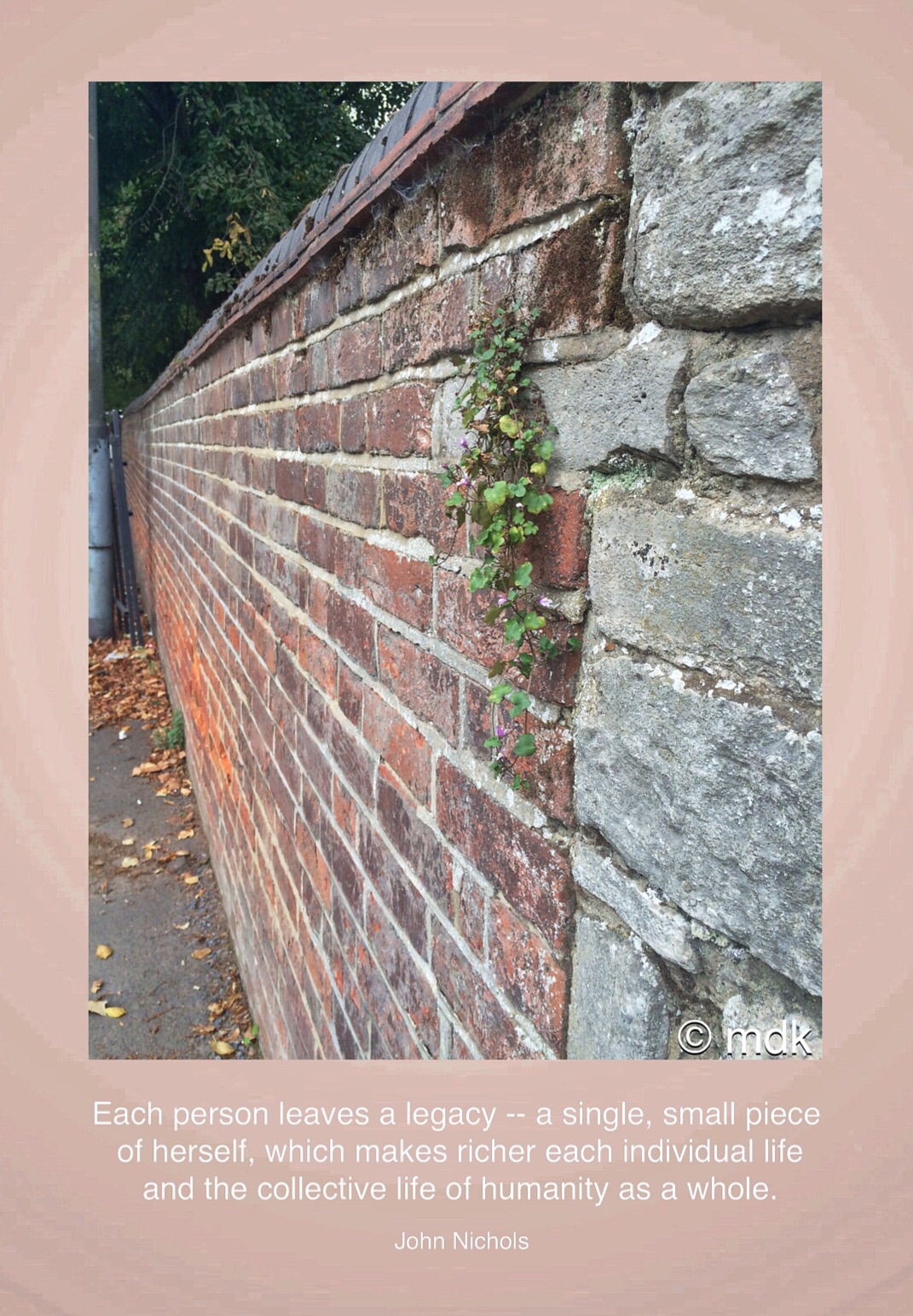 Eventually, I left the wall behind, feeling I’d stolen enough of its secrets and should be on my way. Looking back as I strolled up Western Esplanade, it seemed to have turned into a small, unremarkable wall again and in front of me there were other, more ancient walls to look at. Did the American soldiers walk the old walls and marvel at their history, I wondered? Maybe that’s why they chose this spot to leave their names. When I passed the garderobe, or what’s left of it, I noticed vertical cracks below the steps. Were these scars also the legacy of that war? Through the tiny barred window I’d once thought belonged to a dungeon I could see into the now roofless vault and I climbed the metal steps thinking of coffee and far off days of swimming lessons when we would pass this way each week. 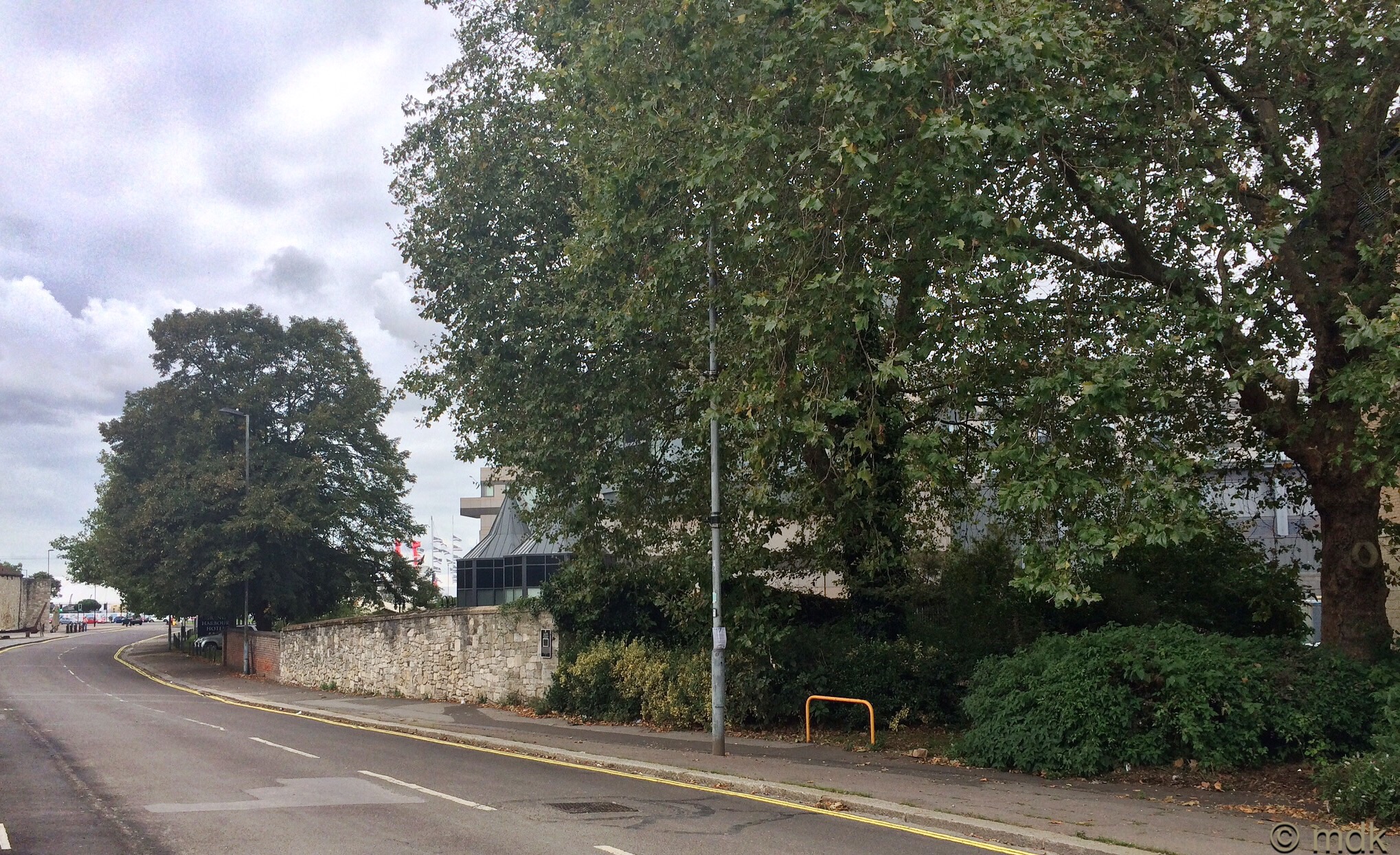 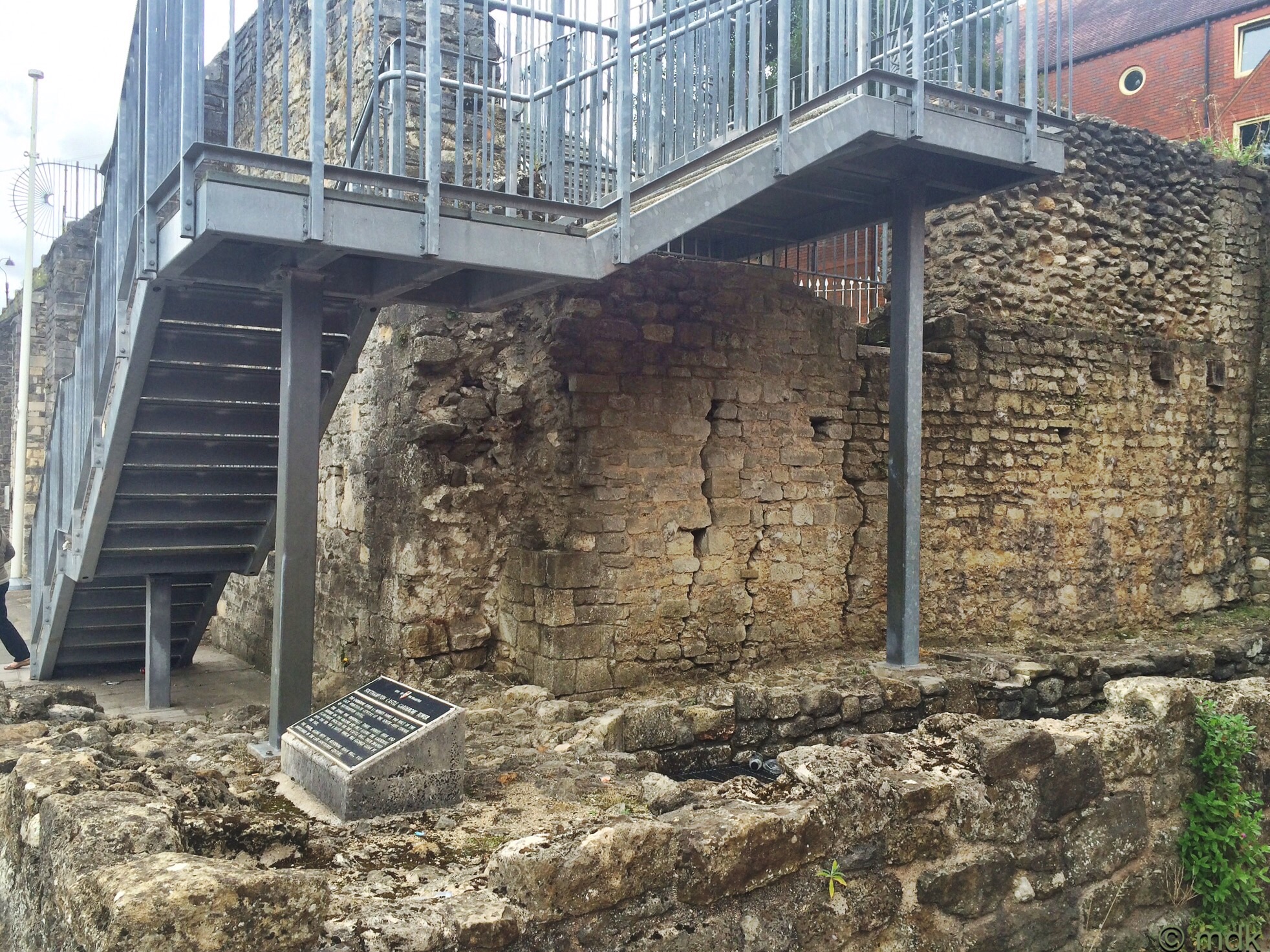 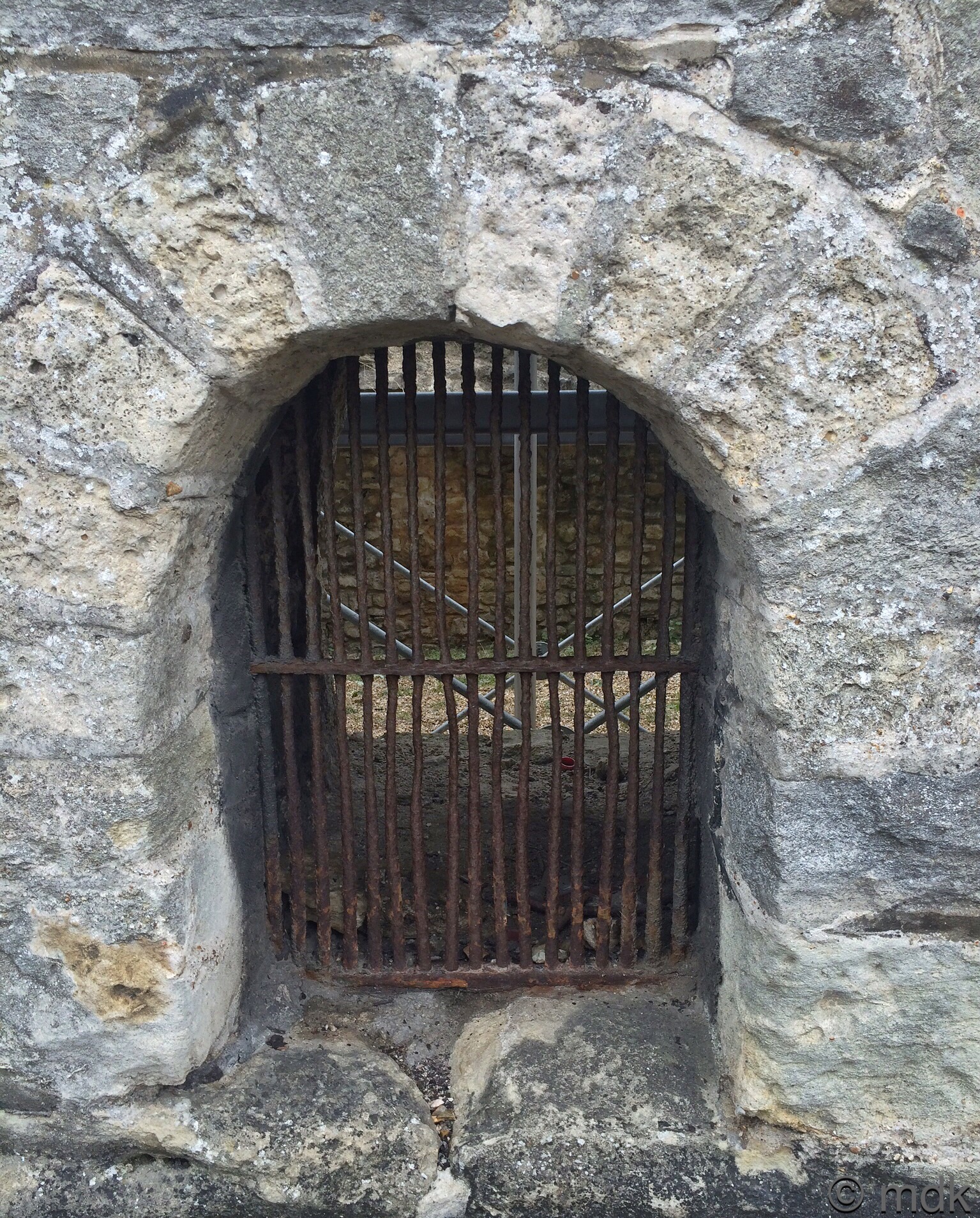 From the battlements above I could see new walls going up. The building of WestQuay phase two is well underway now changing the face of the city forever. Once these old walls would have looked out to sea and the soldiers patrolling would have had a castle as a backdrop. In the mid 1700’s the area was a popular spa and people came to bathe in the sea in specially built baths that filled and emptied as the tides rose and fell or, like Jane Austen, stroll along the promenade in front of the walls.  This new building will be just one in a long line of changes since the land was reclaimed for the Western Docks in the 1930’s. In my youth there was a lido here and the huge Pirelli undersea cable factory. Change is inevitable I suppose but I’m glad the old is being allowed to coexist with the new. 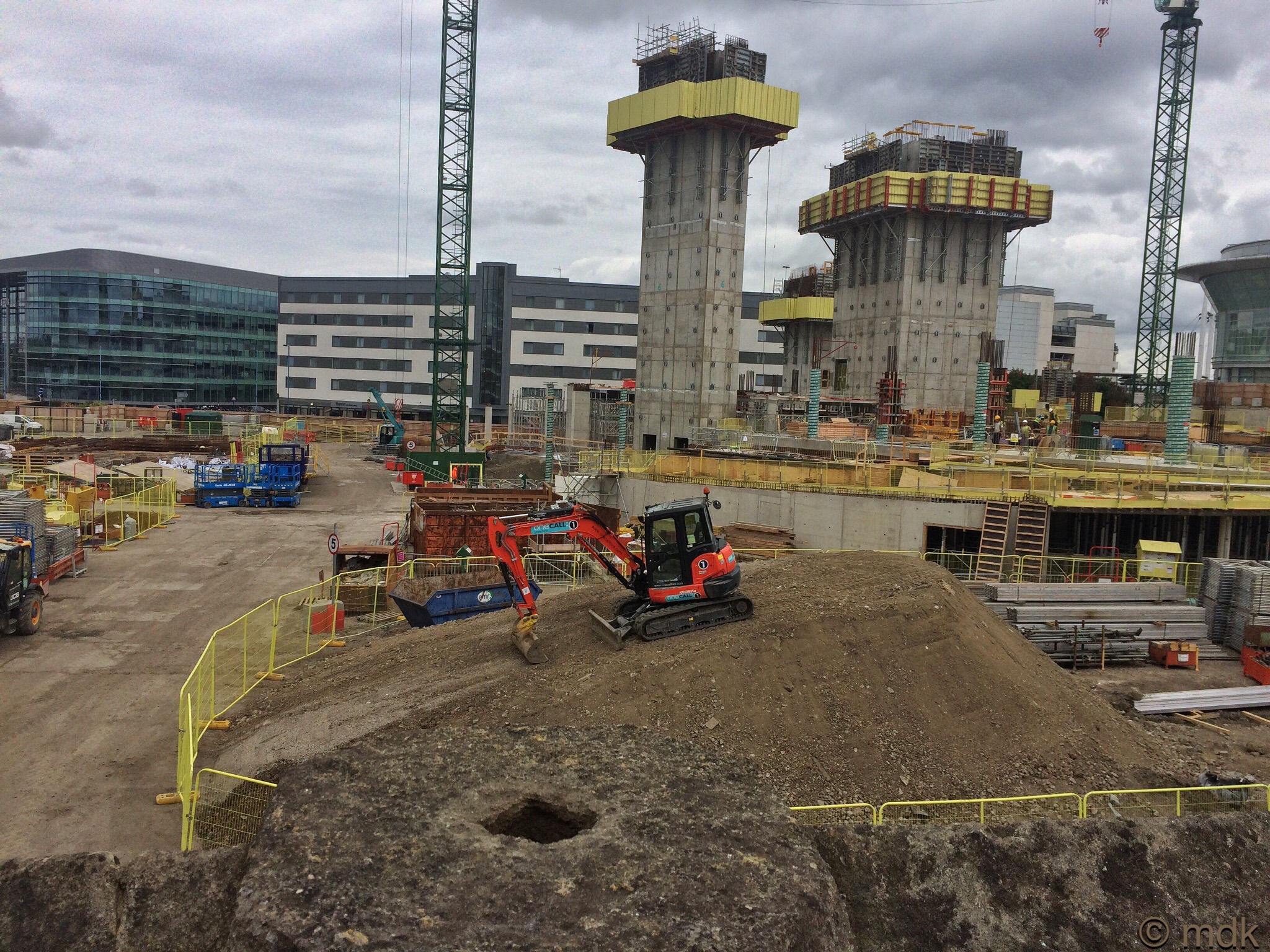 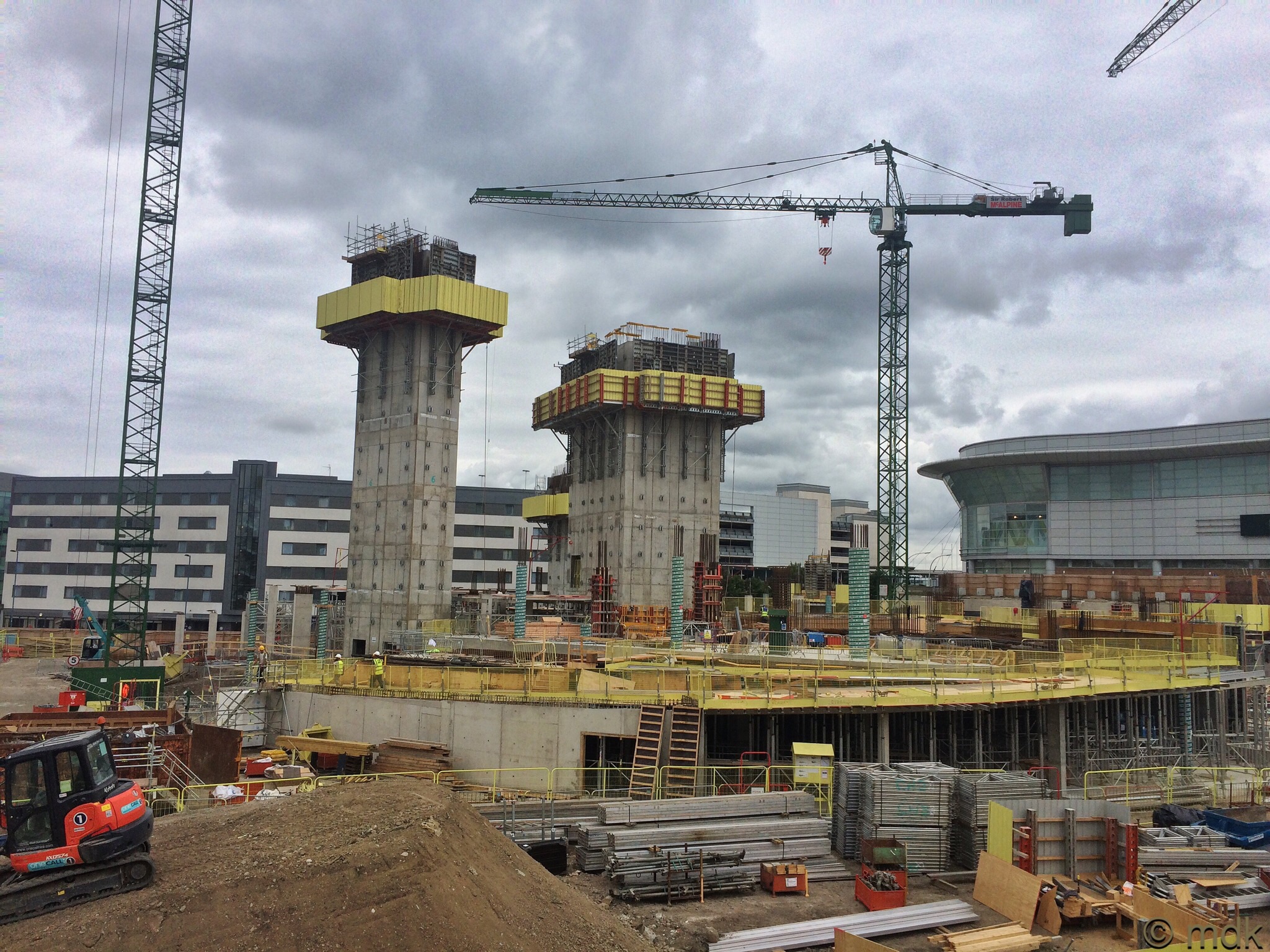 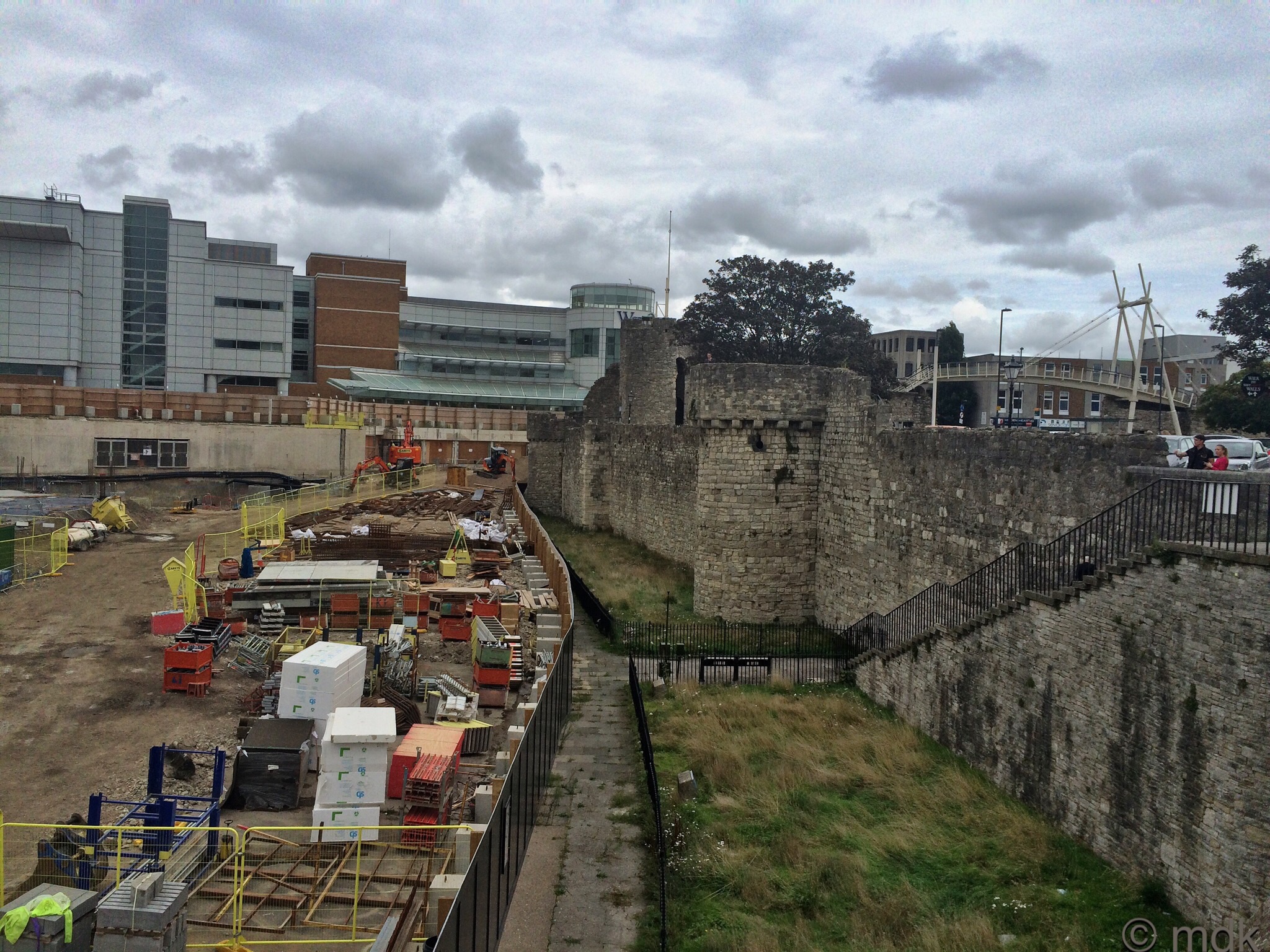 By now the lure of coffee was strong. There was just enough loose change for a small Costa so I passed Catchcold and Arundel towers with barely a glance, heading for the glass and steel towers of WestQuay. Commando rang when I was in the queue to tell me he’d cut his twenty mile run short. His ankle had started to hurt early in the run and, at seventeen miles, he knew he couldn’t carry on. Of course he was worried it could mean the end of his marathon. It was time to turn for home. 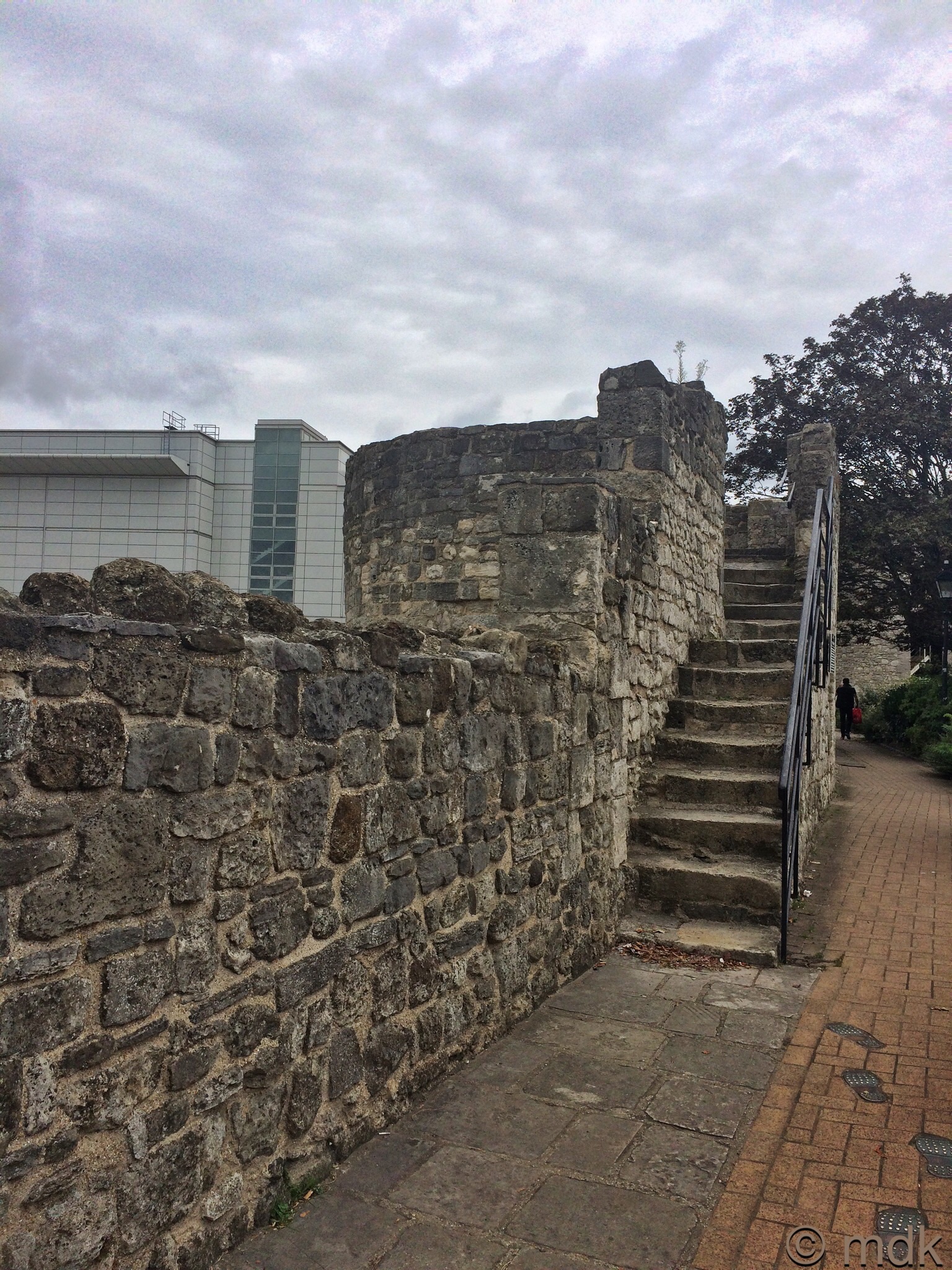 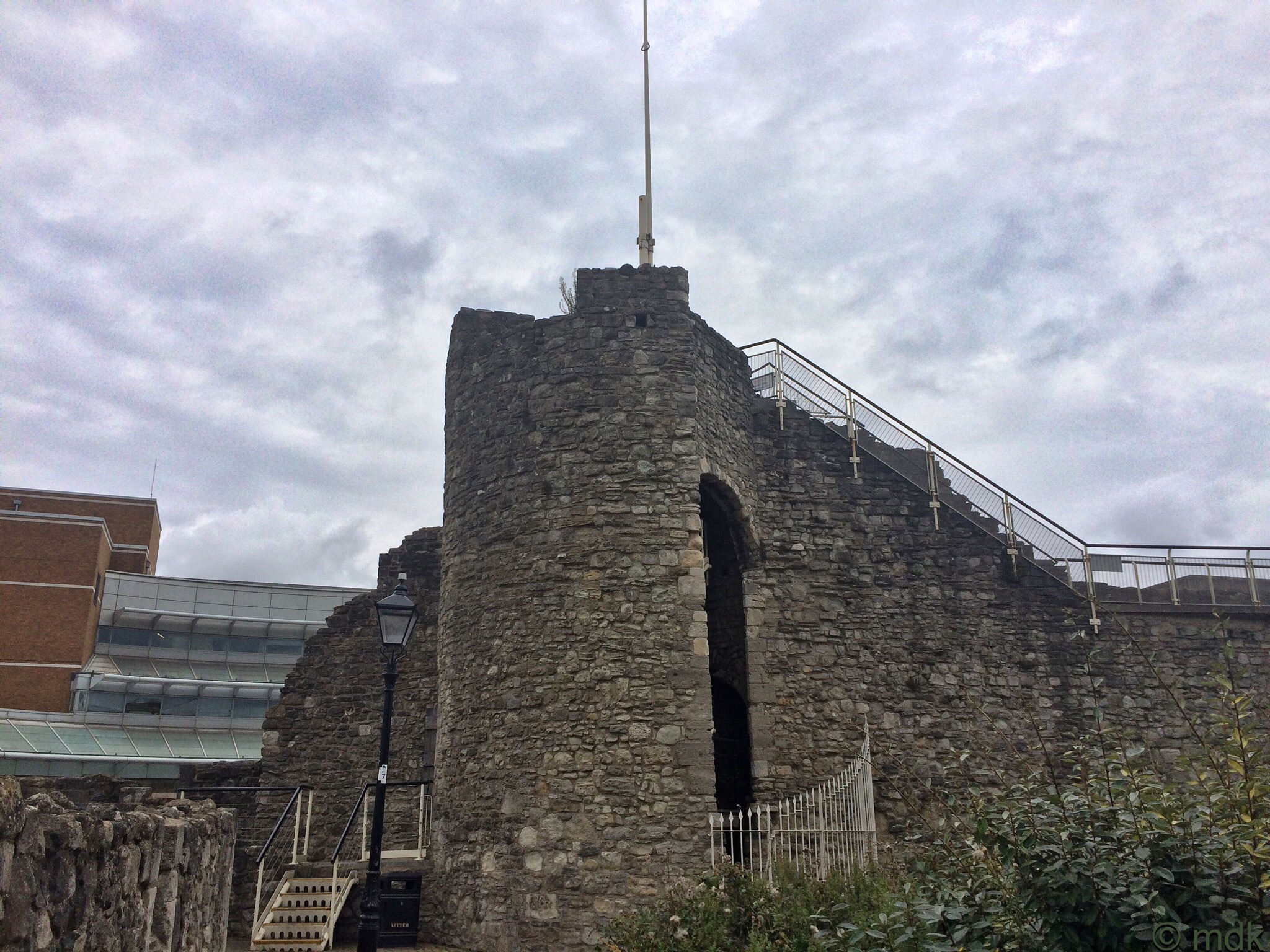 Sipping my coffee I passed the Bargate, thinking more about Commando at home than the gateway to the city. It was tempting to just jump on a bus to get there quicker but, being Sunday, that wasn’t really an option and would have almost certainly taken longer. Marching out as fast as I could it didn’t take too long to reach bridge two of my two bridge challenge, Northam Bridge. Across the road was the desolate park, looking as dark and dismal as ever and the orange barriers where the car crashed and almost ended up down on my river path one Saturday morning in early July.  Passing the steep steps I take most workday mornings I strode across the bridge. 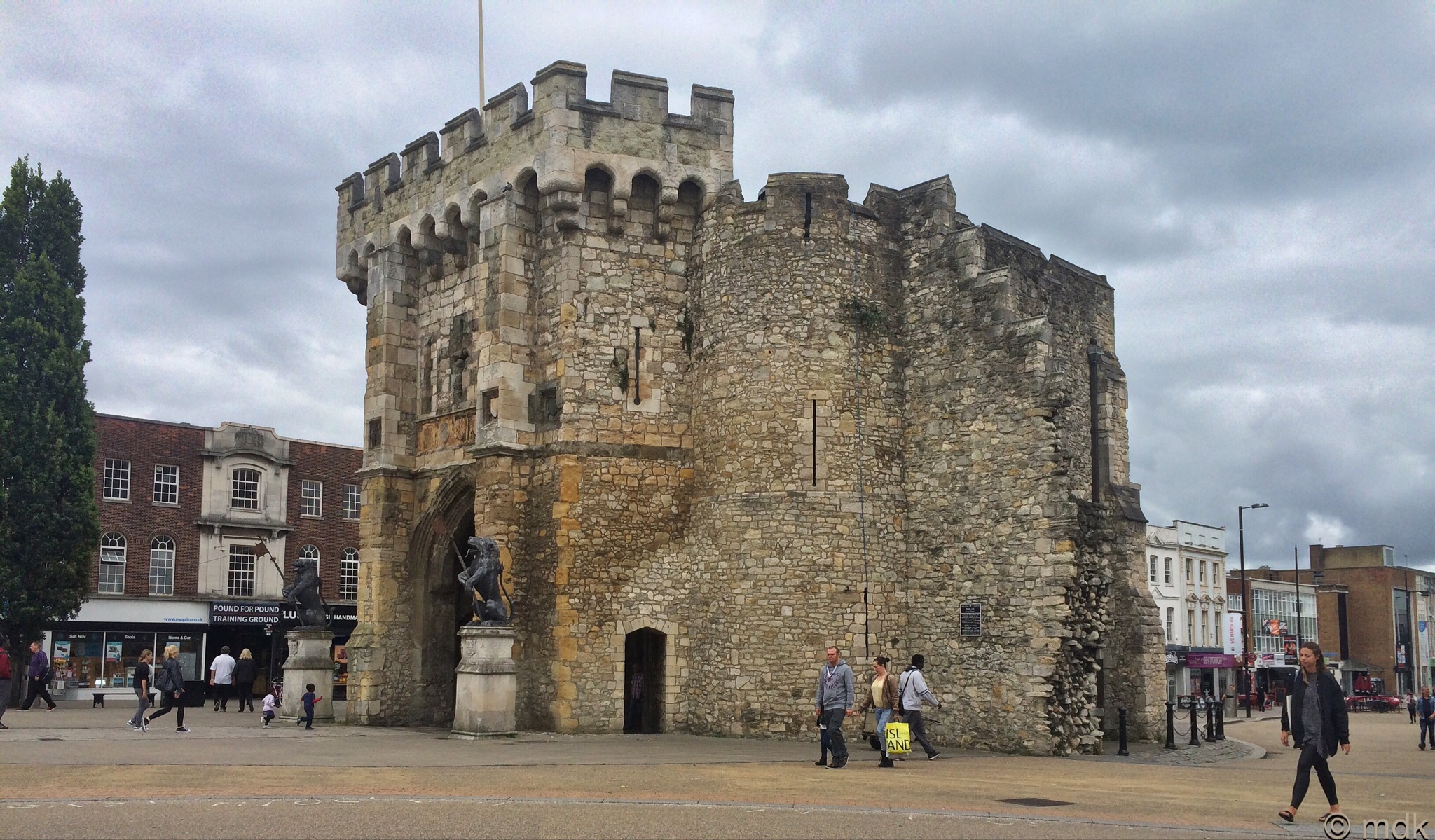 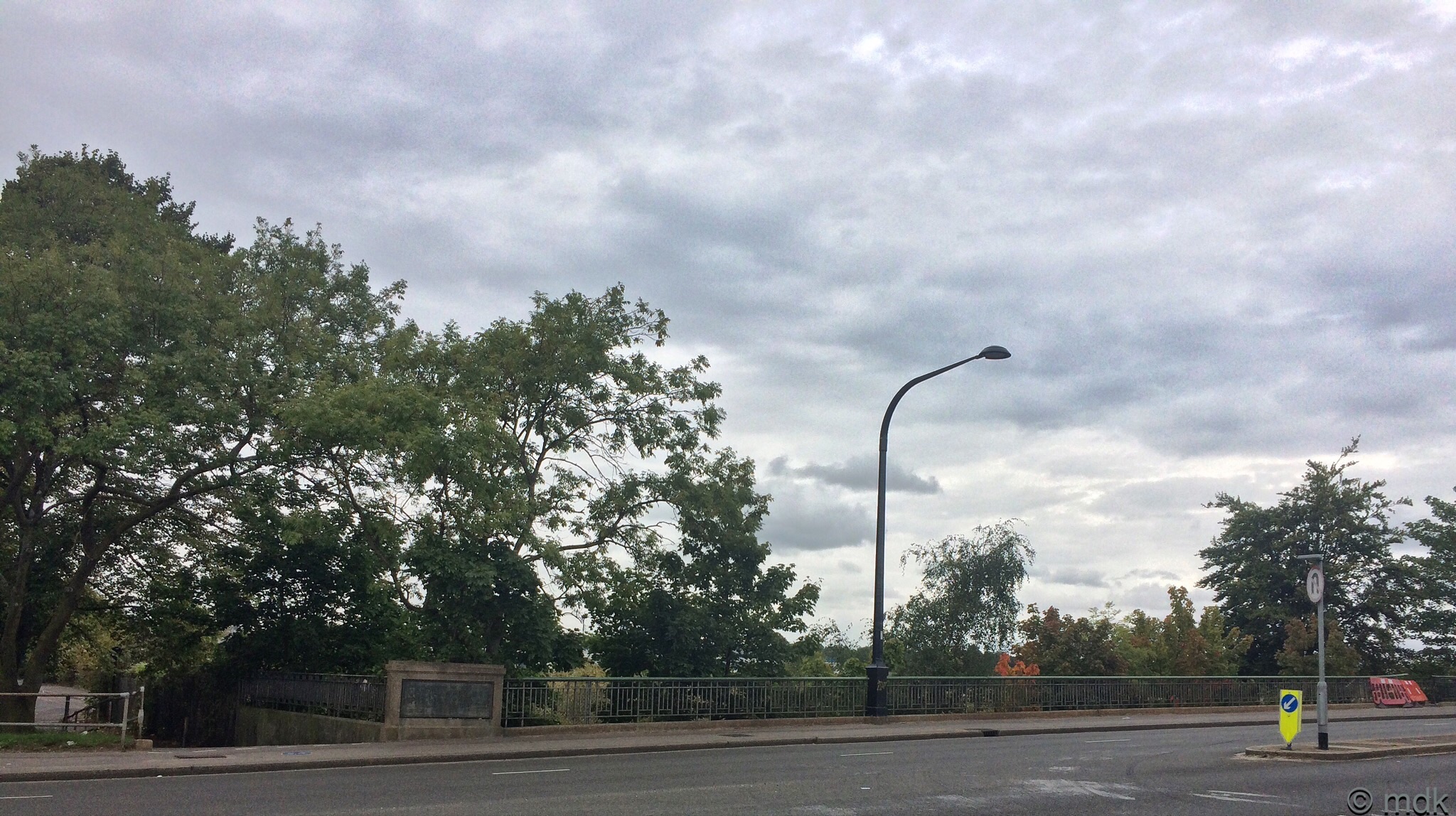 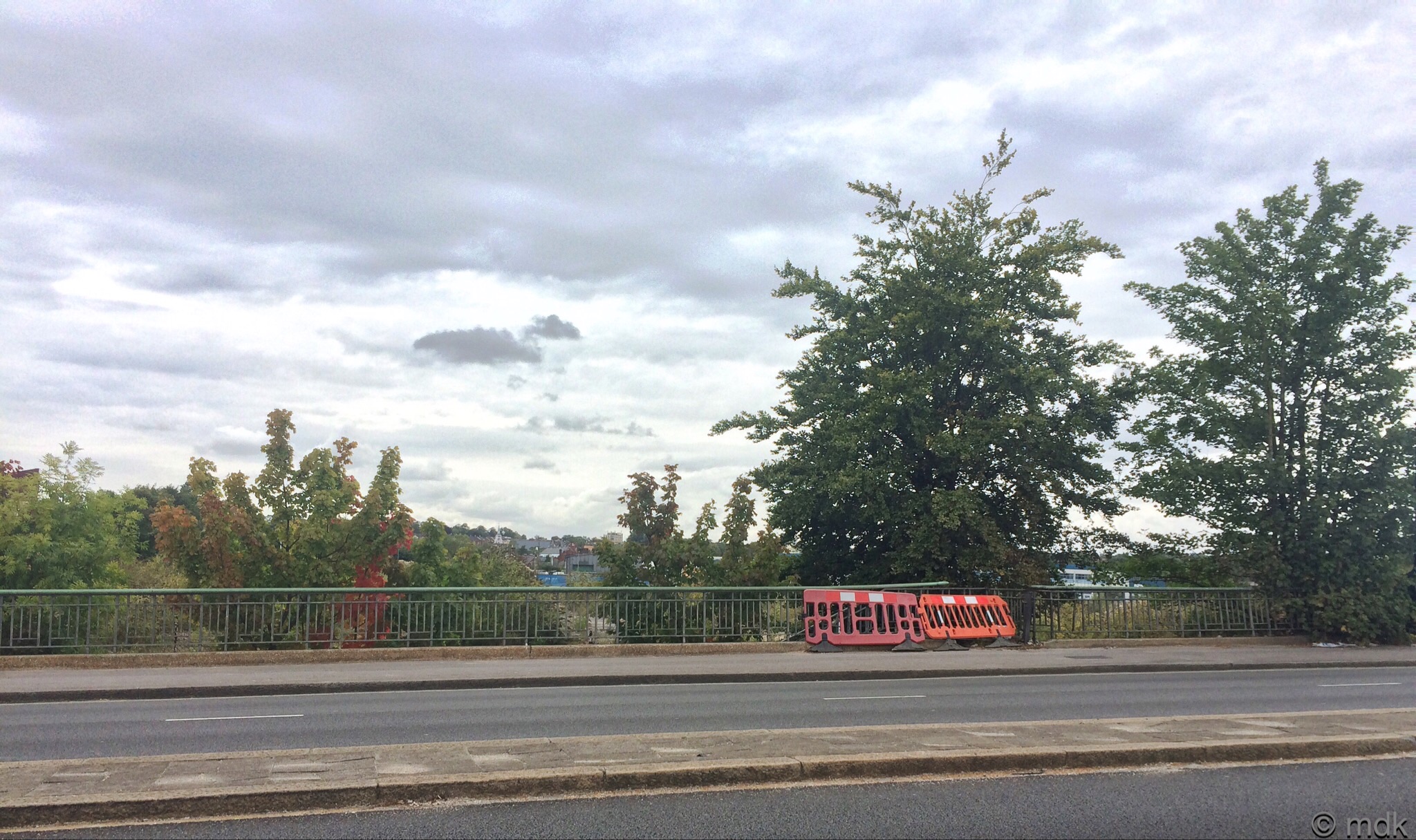 Despite my worries about Commando and his ankle I couldn’t help thinking how this bridge was another example of the changes in the city and the way the old and the new manage to coexist, at least in part. Once upon a time Mansbridge was the souternmost bridge on the River Itchen the only other way across being the Itchen Ferry boat. Then, in 1796, David Lance, who owned the Chessel Estate on the Bitterne side of the water, suggested a bridge be built. This of course, would make his land far more valuable as well as providing a new, shorter, link between Portsmouth and Southampton. An act of Parliament was passed and a wooden toll bridge was built. 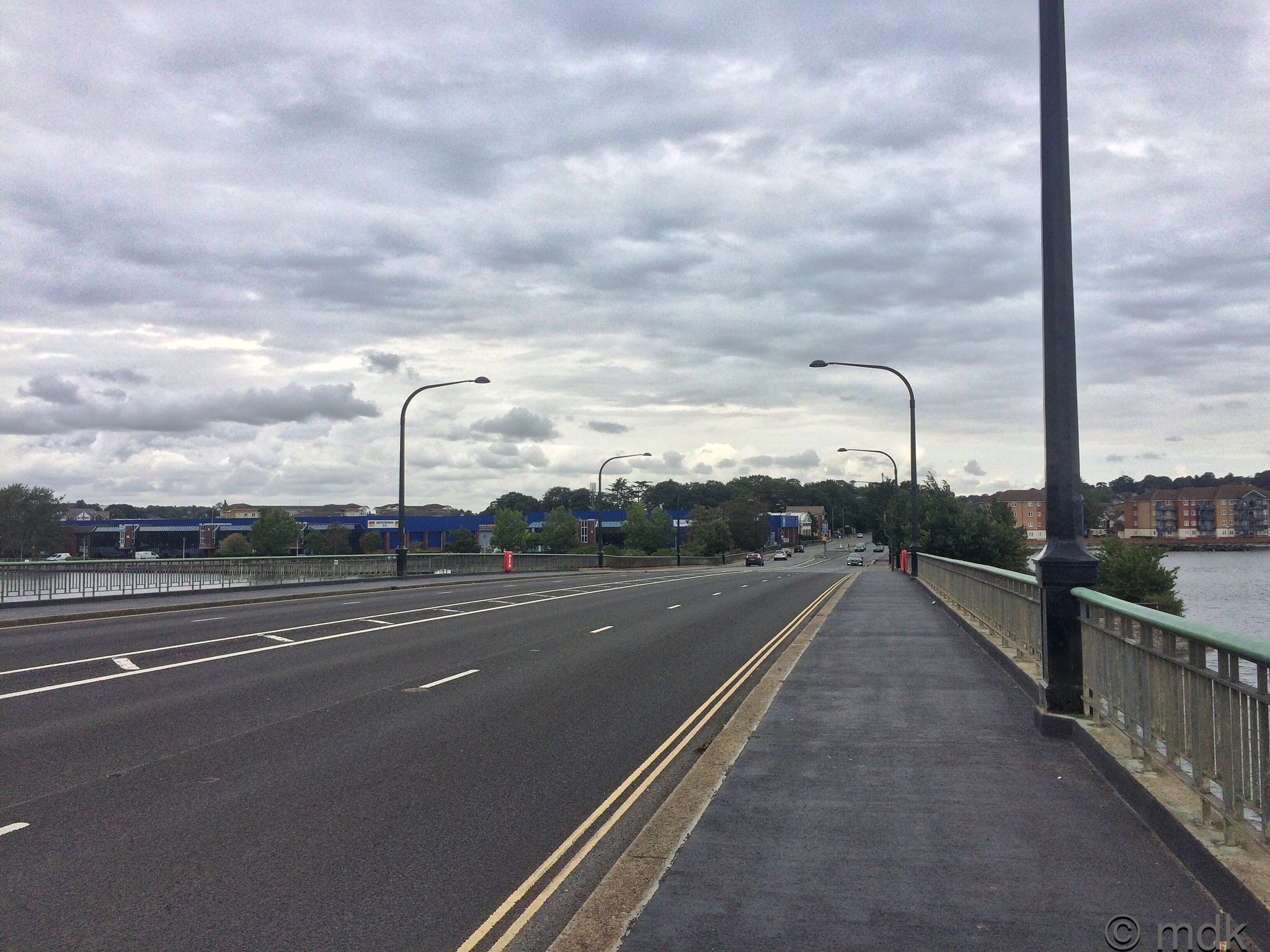 In 1899 a new iron bridge replaced the original. The tolls were finally removed in 1923, when ownership of the bridge was transferred to Southampton Corporation and the first bus service crossed the river. The bridge I crossed on Sunday is the third incarnation, built in 1954, it was the first prestressed concrete bridge to be built in the UK.

It may have been new and it may have been made of concrete but the lovely iron railings and copper rails added a decorative touch. As I stepped through the gate onto the embankment on the Bitterne side of the water I was actually stepping onto the remains of the old iron bridge. This embankment, the arch of the scouring channel and the old stone wall still remain as a pleasant grassy walk I take most days. 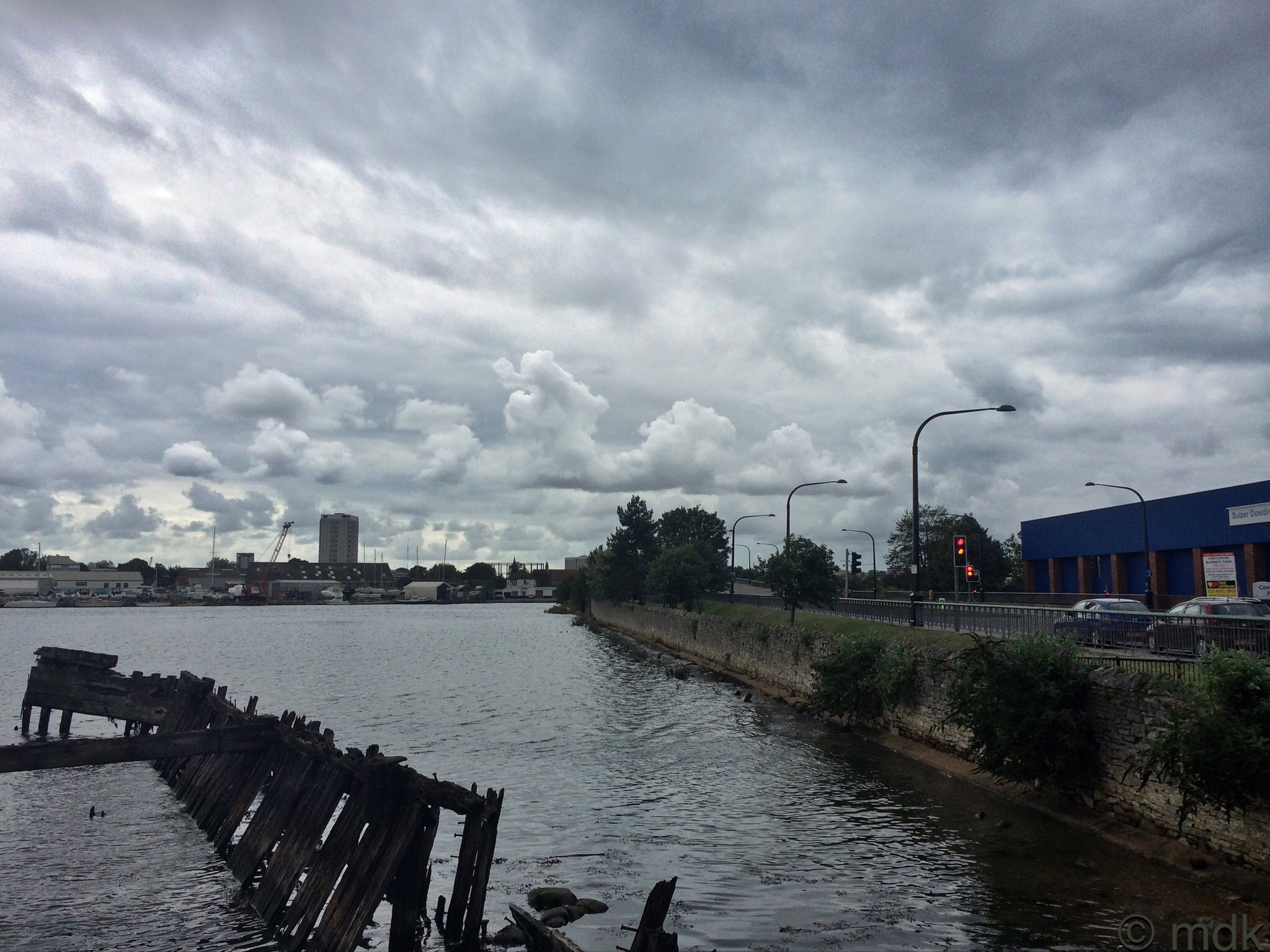 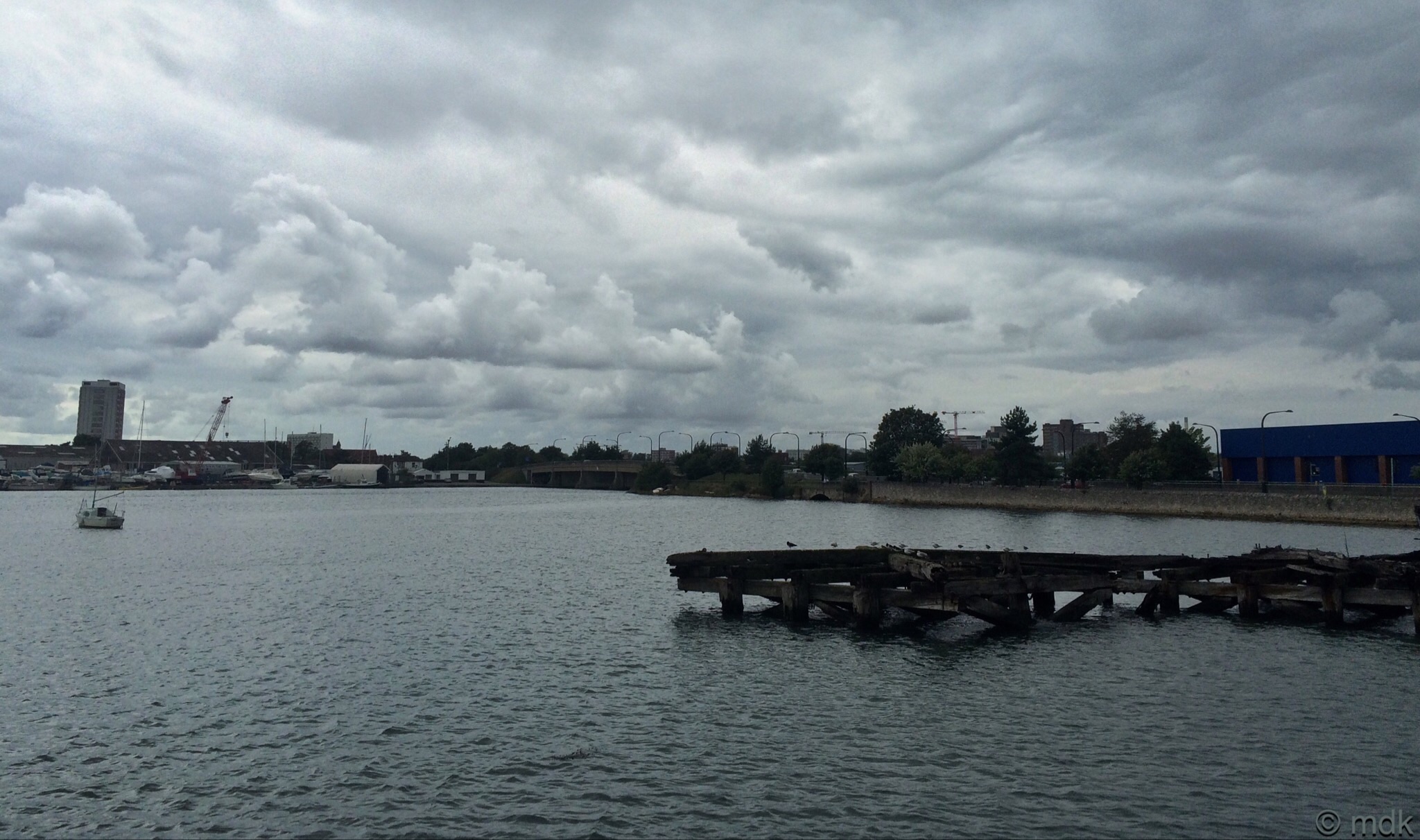 They say you learn something new every day and it wasn’t until I was checking the facts and dates around the bridge that I discovered it had a ghost. Imagine that, I’ve crossed this way thousands of times and had no idea it was haunted. Apparently there have been many reports of motorists picking up a young girl on the bridge. The story is always the same, they spot the girl, soaking wet and crying at the side of the road. She says she lives in a nearby road, one I pass on my way home, and they drive her there only to find she has disappeared when they arrive. Those that knock on the door of the address she has given are told there was a girl who lived there but she drowned in the river. How spooky! 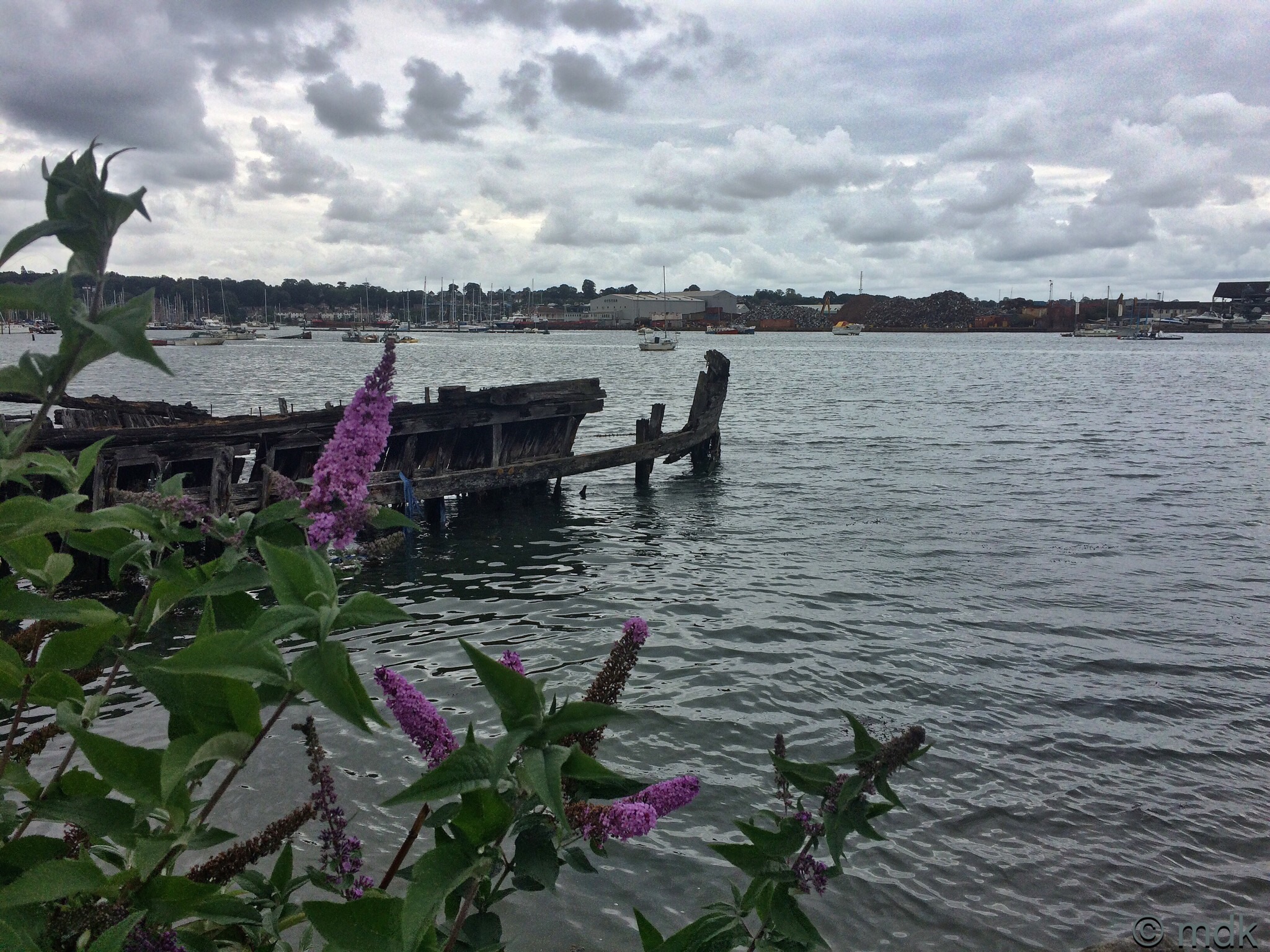 26 thoughts on “A boat, some walls, a legacy and the ghost of Northam Bridge”