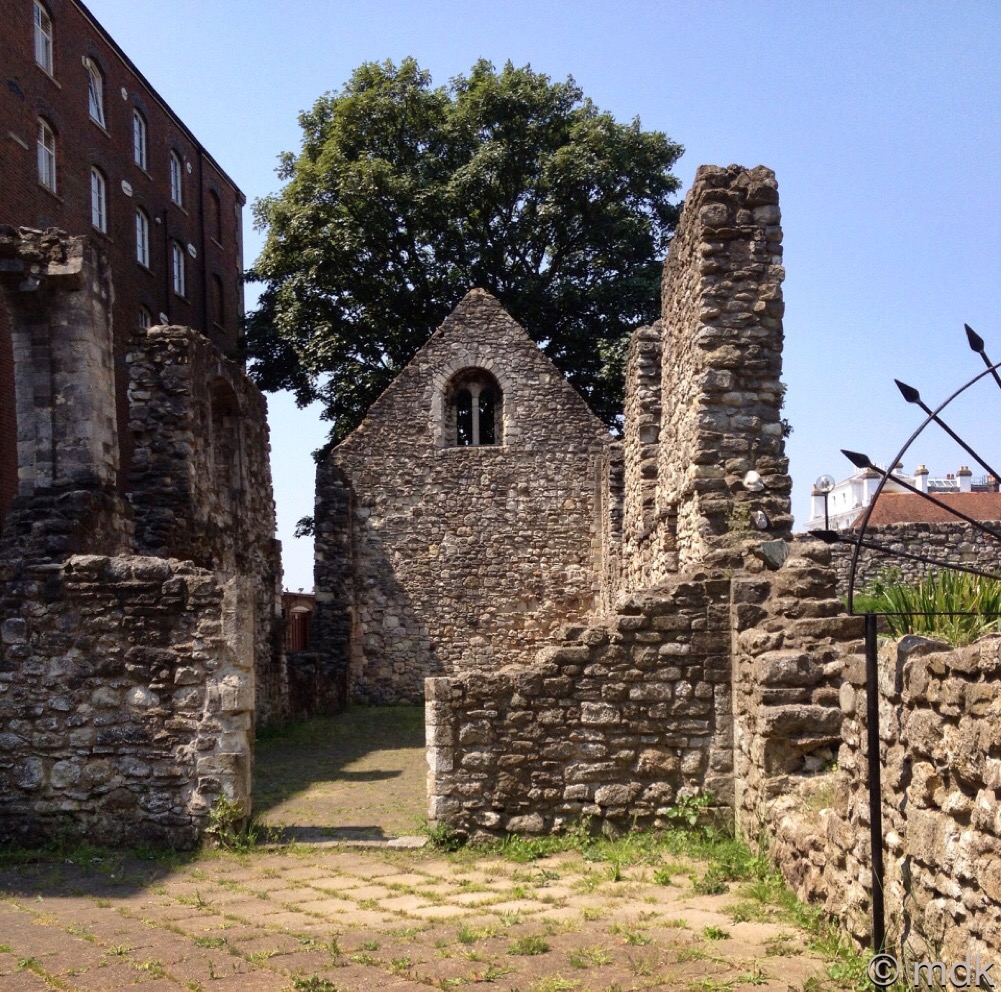 Working a five day week was turning out to be harder than I thought although I had plenty to keep me occupied. To make up for less walking at the weekend I was trying to get as much walking in during the working week as I could. The walk of the day was to Canute’s Palace to explore the old walls.

It’s been more than four years since I last worked a five day week. Since last September I’ve been working three day weeks before that, at the Mad House, it was four ten hour days. Today is day four of my working week, we are into new territory and it feels slightly strange. My body is saying, hey, why are we working, it’s the weekend? Don’t get me wrong, I’m not complaining, I enjoy my job and I have more than enough to keep me busy five days a week. Five normal length days are infinitely preferable to four very long ones, especially at the Mad House when one day a week would have been one too many. It just feels odd that’s all.

A five day week also leaves a lot less time for walking and cooking. I’m going to miss that, especially the walking. There are also all the little jobs to fit in. Things like clothes mending, of which there seems to be rather a lot at the moment. When I got home last night Commando noticed the hem had come down on the back of my dress. Last time I was on the ship the hem came down on my trousers. What is it about hems and ships? Next time I’m taking a sewing kit on board with me.

Now I’m working more the spring has finally decided to spring properly. When I think of all those cold wet walks it hardly seems fair. This morning I was quite looking forward to the walk to work, there’s something about that time alone with my thoughts, the rhythm of one foot in front of the other, looking around at the bounties Mother Nature has strewn across my path. Then I got an offer from Gigi I just couldn’t refuse. She texted me at half past seven, she was driving to work as she had all the marketing boxes and stands to take in, she was leaving in about ten minutes, did I want a lift? Actually no I did not, especially not that early (I don’t normally leave until eight) but the message implied within the message was “I need some help to move all those boxes again.” I could hardly say no and let her struggle.

It may have been more than four years since I last worked in marketing but somehow I can’t seem to escape those darned boxes! Everyone thinks marketing is a glamorous job but let me tell you right now mostly it’s about carting around boxes of leaflets, brochures, assorted junk to be given away, heavy display stands, sacks of mailings and goodness knows what else. It’s also about impossibly complicated budget sheets, equally complicated statistics sheets, proof reading, and trying to say the same thing a million different ways. The trouble is, once you’ve done it, you can never quite get away from it.

So there was no walk to work. Instead I carted three very heavy display stands from the car to the lift and then up the stairs to the office. I also arrived almost an hour early which at least gave me chance to get some pieces of paper off my desk before Arabella came in. Actually, when she did come in, she was tied up with problems and meetings most of the morning so I managed to get quite a few pieces of paper off my desk. It almost looks like a real desk now rather than a paper recycling facility. Almost.

It could be worse, I could be Alice. She’s still suffering badly from DOMS from her run in with the personal trainer. The poor girl is hobbling around and groaning a lot and, in another example of Murphy’s Law at work, she had a mailing to get out so seemed to spend most of the day staggering up and down the stairs. She was going to risk the gym tonight to see if it helped ease her muscles, just a gentle workout. Arabella asked her if the personal trainer would be there and whether he’d try to rope her into another session. “If he comes anywhere near me I may have to punch him,” Alice said. She had a glint in her eye that told me she meant it too. For his sake I hope he keeps out of her way.

For my lunchtime walk I decided to go down to Canutes Palace and the buildings around it for a change. It was a whim really but it was a nice enough walk, especially in the sun. There’s something about those old stone walls that keeps drawing me back again and again. Standing looking at all the old doorways and windows, the remains of rooms, flagstones, courtyards, I can’t help thinking about the people who built those walls, walked on those floors, lived in those rooms. The palace may not really have been King Canutes (it was built in the twelfth Century long after he was dead and buried) but it certainly belonged to a very wealthy merchant as it would have been on a prime position on the waterfront. No one knows for sure but it’s thought the upper room could have been a counting house or a place of buisiness. The merchant, or his heirs, extended it, the double windows in the gable end are Norman. 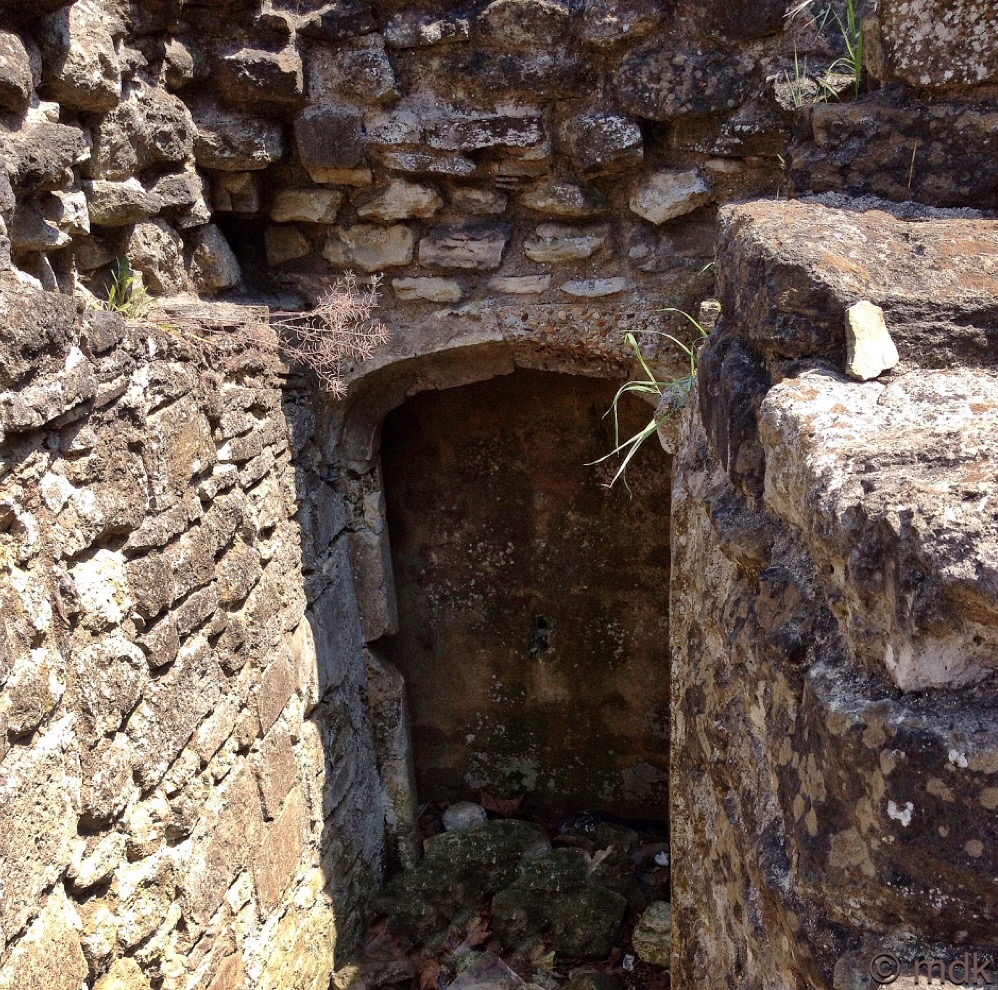 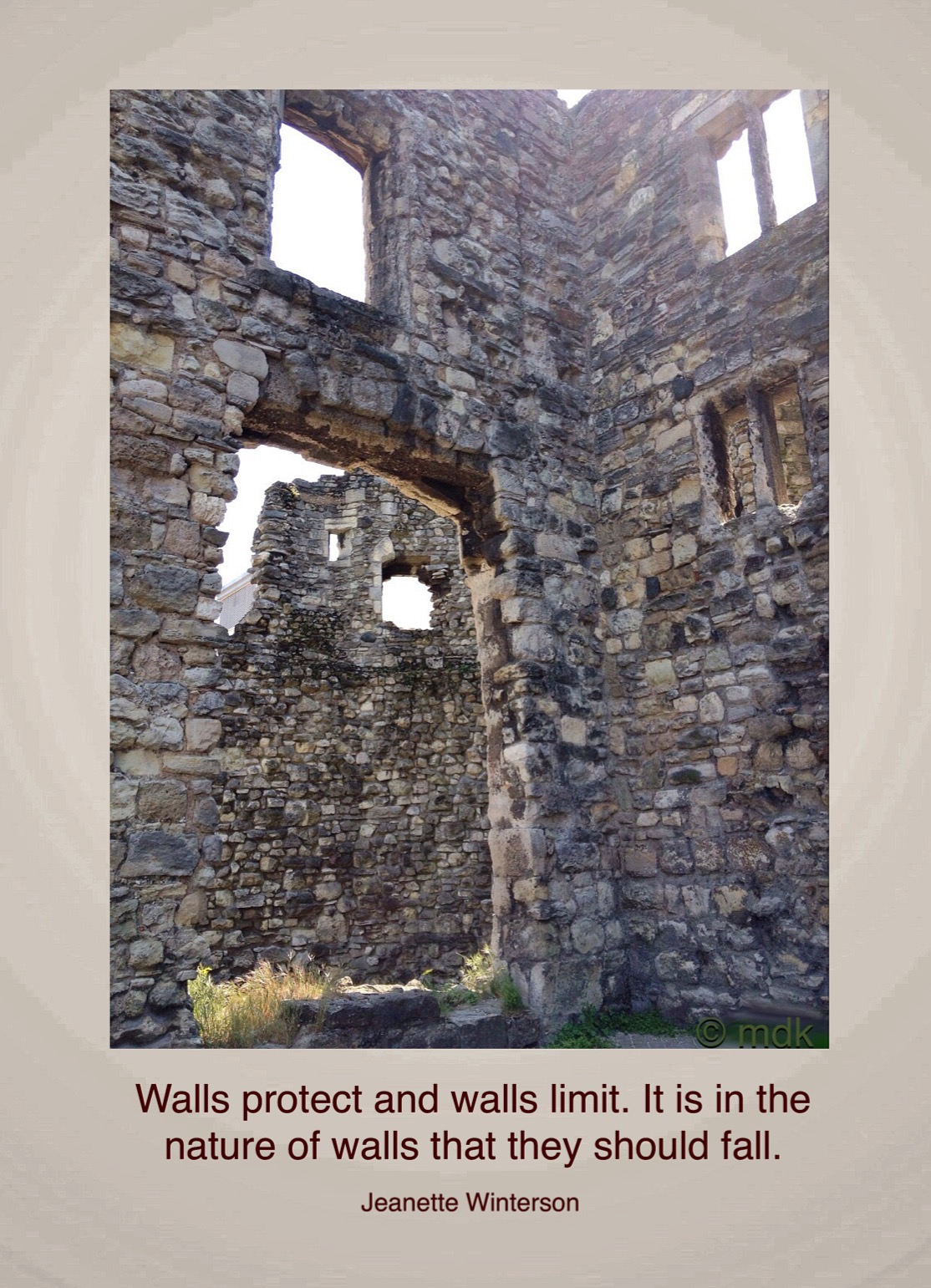 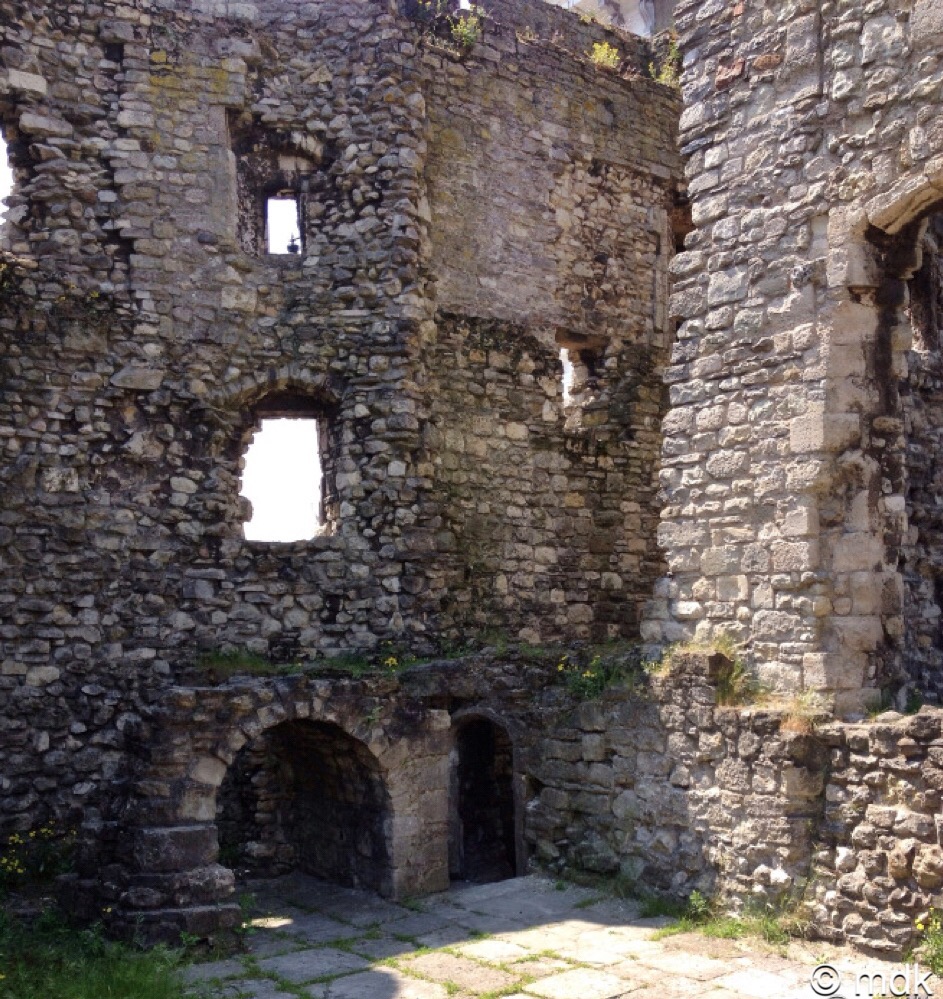 There wasn’t really enough time to explore the little garden properly so I just strolled though it enjoying the sun and the shady areas beneath the trees. There’s another old building, probably an annex to the palace, in the gardens but it’s surrounded by a fence which is a shame. I peeked through the railings of the fence and took some photos but I’d have loved to have walked inside and knelt to look at the wildflowers properly. 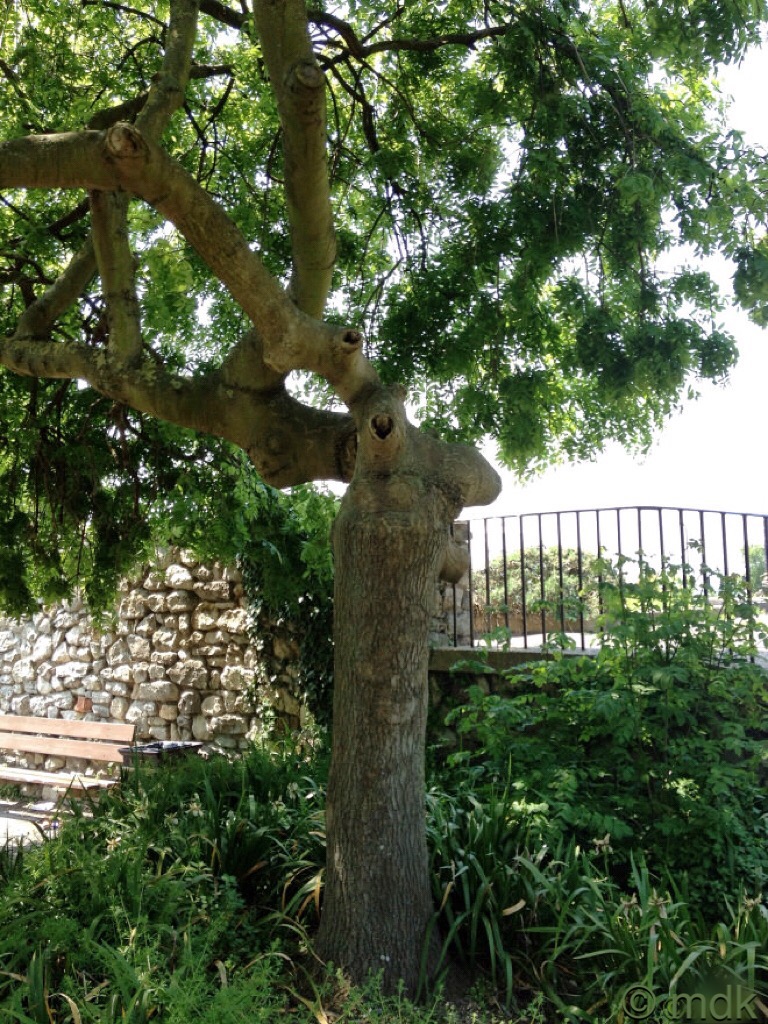 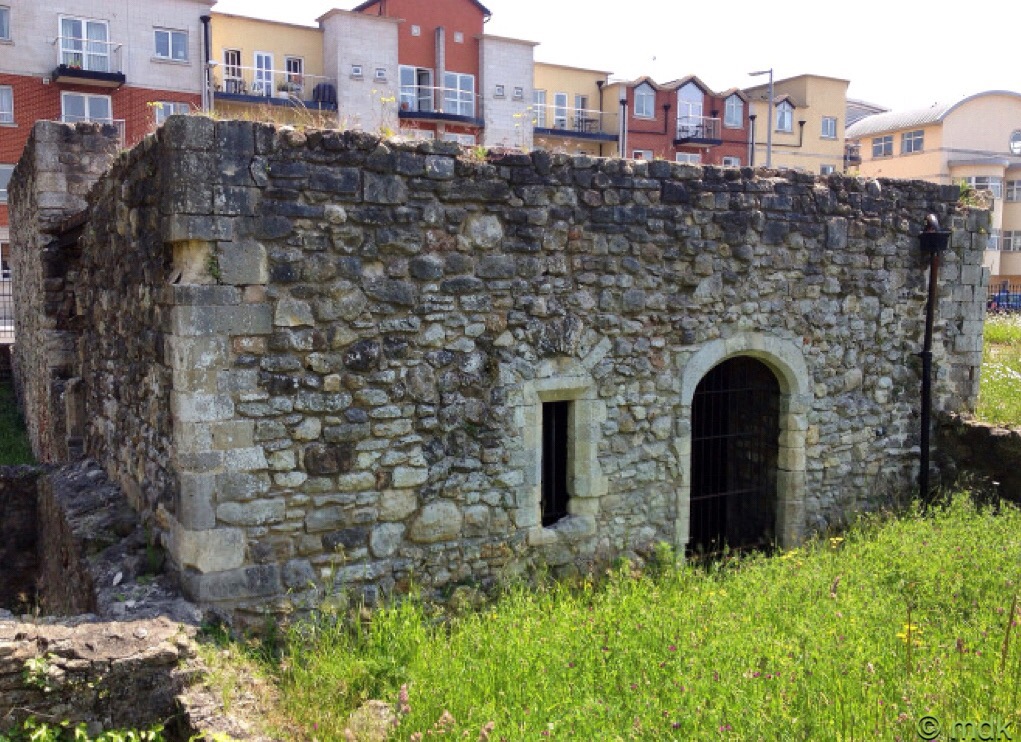 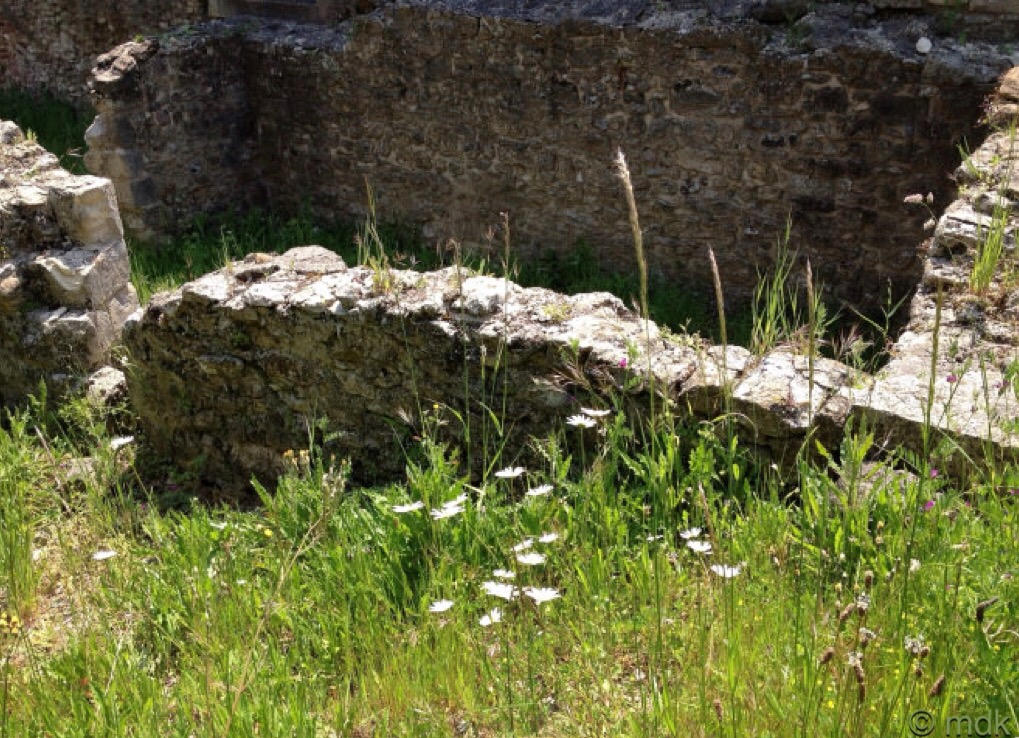 I did stop off at the shop on the corner, now I know it’s open again, and picked up a coffee (not that it’s really all that good). Feeling quite virtuous I also grabbed a punnet of strawberries because they looked so nice But then I went and spoiled it all by also picking up a small bag of dark chocolate coated coffee beans. Who knew you could get two of my most favourite things in one product? How could I resist? In my defence I only ate a few, although several other people in the office had a try out of curiosity. They were lovely, chocolatey with a satisfying crunchy coffee centre. The rest are in my drawer to be savoured little by little.

When I got back Alice had just returned from a lunch date with some old friends. She’d been to a new place in town called Britannia Tea Rooms. We looked it up on Google and the pictures showed bone china cups. It boasted two murals of port and starboard views at sea on board HMY Royal Britannia, cream teas, cakes, traditionally brewed herbal teas and a selection of coffees. Alice bought back some leaflets for us to look at. Arabella was very taken with it, just her kind of place, and she’s promised me an outing to it one of these days. They can keep the tea and I’d rather avoid the cakes but the coffee sounds wonderful.

Once we’d finished drooling over the pictures it was time to get down to the budget spreadsheet, starting with the figures from the last year. This would have been easy if there hadn’t been a four month gap in the records. As it was I had to sift through all the archived invoices for the year (not stored in any particular order of course) and try to fill in the gaps as best I could. It was a long job but I managed to finish almost on the dot of five thirty. When took the resulting document to Arabella in her lair on the mezanine we got involved in a conversation about the photos she took of her garden with her new iPad. She’s never had an iPhone or an iPad before and she’s managed to set everything up quite well but I did give her an impromptu lesson on a few shortcuts which she was pleased about. Of course this all meant I left the office quite late. It was a long old day.

At least I got to walk home. On the approach to the New Bridge a clump of ground ivy growing on a wall caught my eye. This is a fine example of a plant you could easily miss if you weren’t looking closely but the tiny flowers are so pretty it would be a shame if you did. It springs up all over my garden, another example of a weed I leave to grow where it will. On the bridge I stopped for a moment to look at the wonderful view on my side of the Itchen, taking in all the trees and grassy areas I would soon be walking through. So much greenery in the heart of the city but once all of this view would have been woods, although there would have been no bridge to stand on to see them. 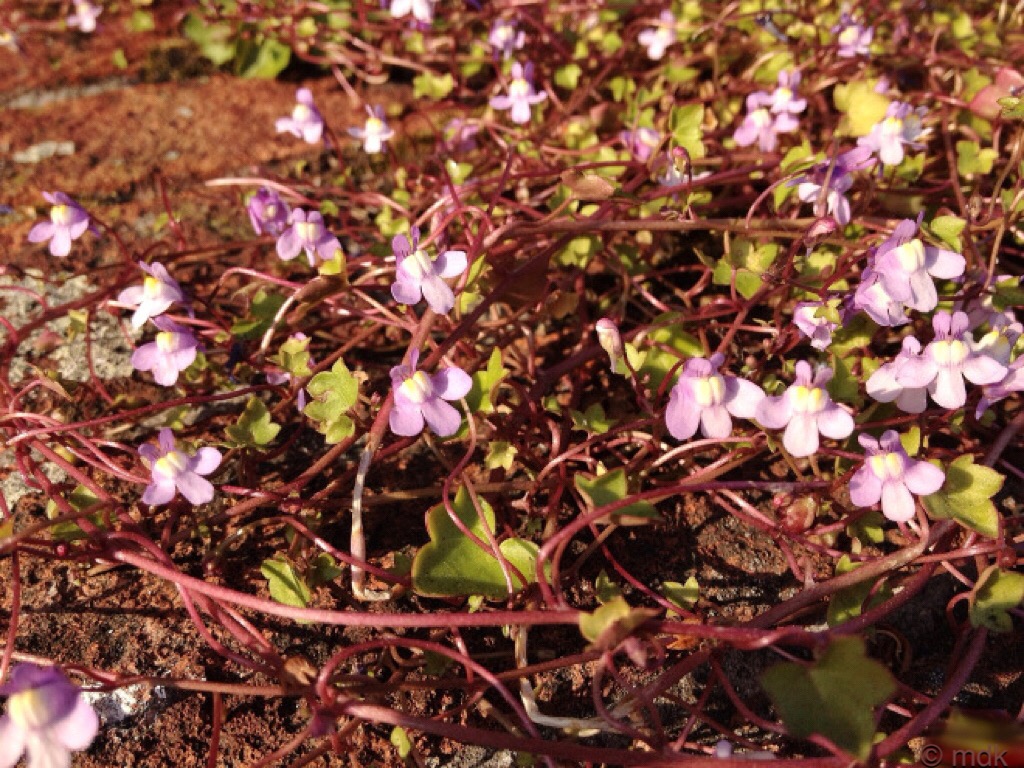 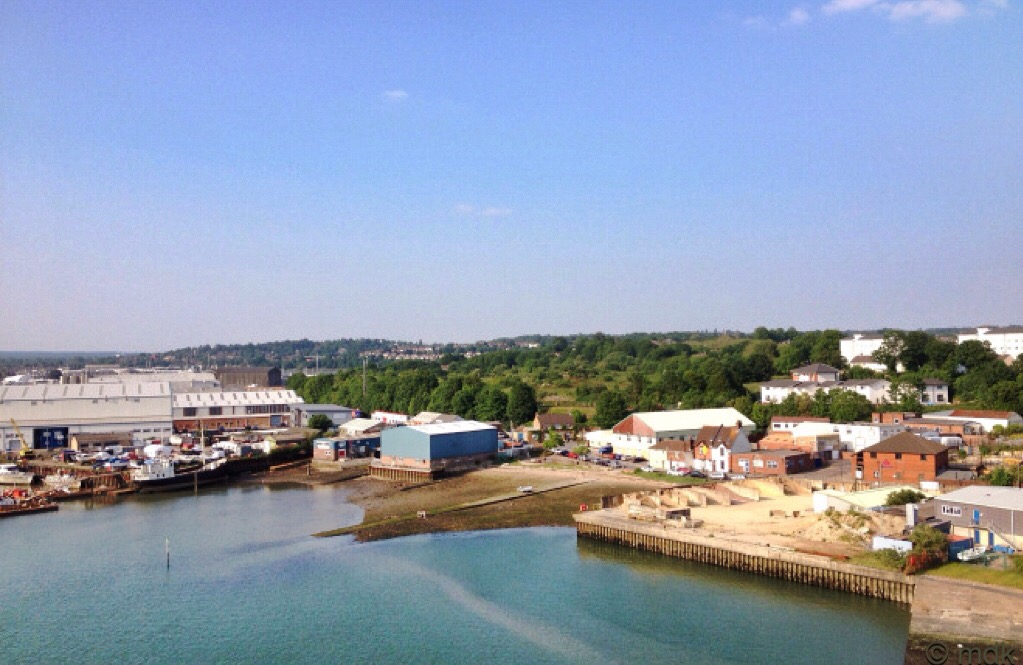 I have often felt myself fortunate not to be among the masses who suffer the agonies of hayfever with streaming, puffy eyes and runny nose. Walking along the woodland path tonight those feelings were reinforced when I saw all the grasses setting seed. There are berries beginning to form all along the path, blackberries I think, although only time will tell. I may have to bring a bag when I come this way in a few weeks, Commando likes a nice blackberry and they’re one of mother nature’s best freebies in my opinion. The hawthorn is beginning to produce haws along here too, although in other places it’s still in full flower. These berries are, apparently edible, although I’ve never tried them, and are made into jellies and jams or wines. I may not want to eat them but the birds surely will. 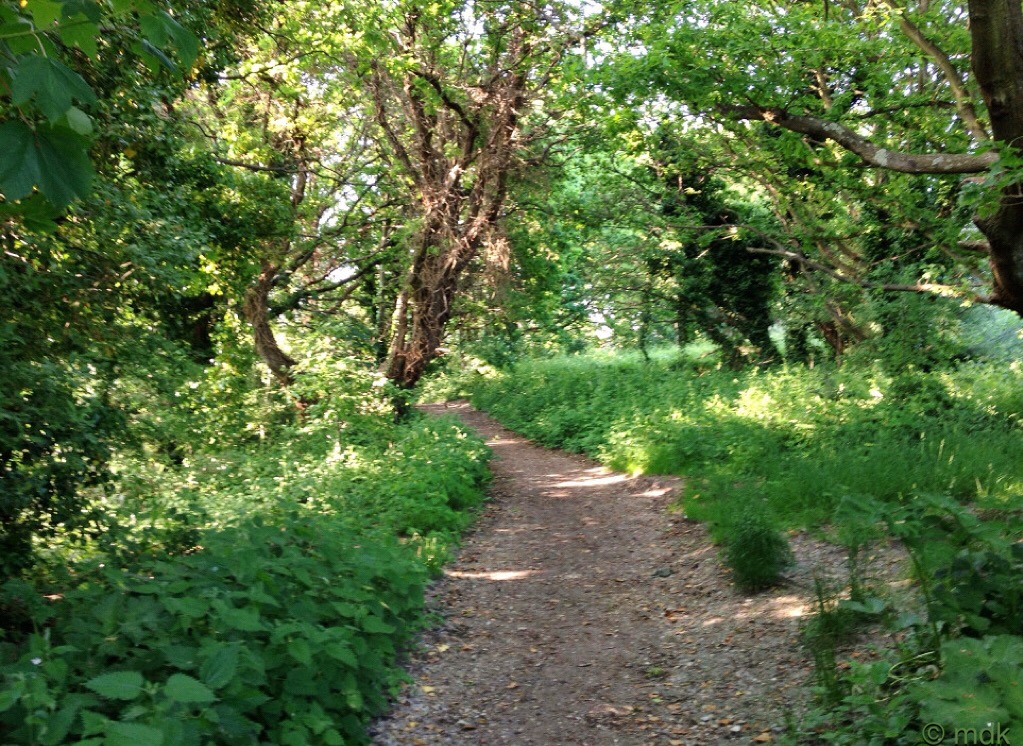 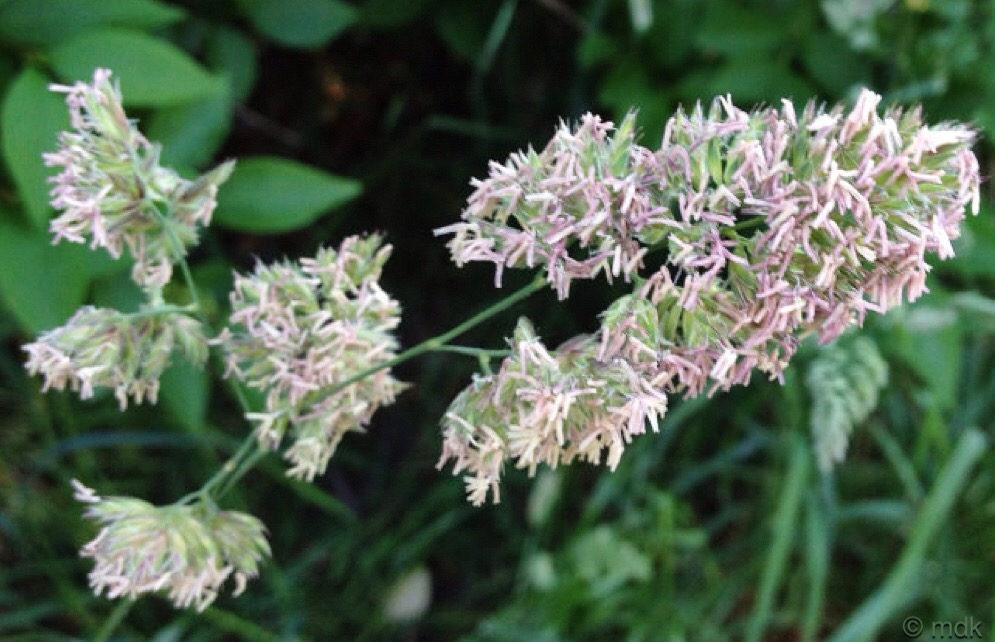 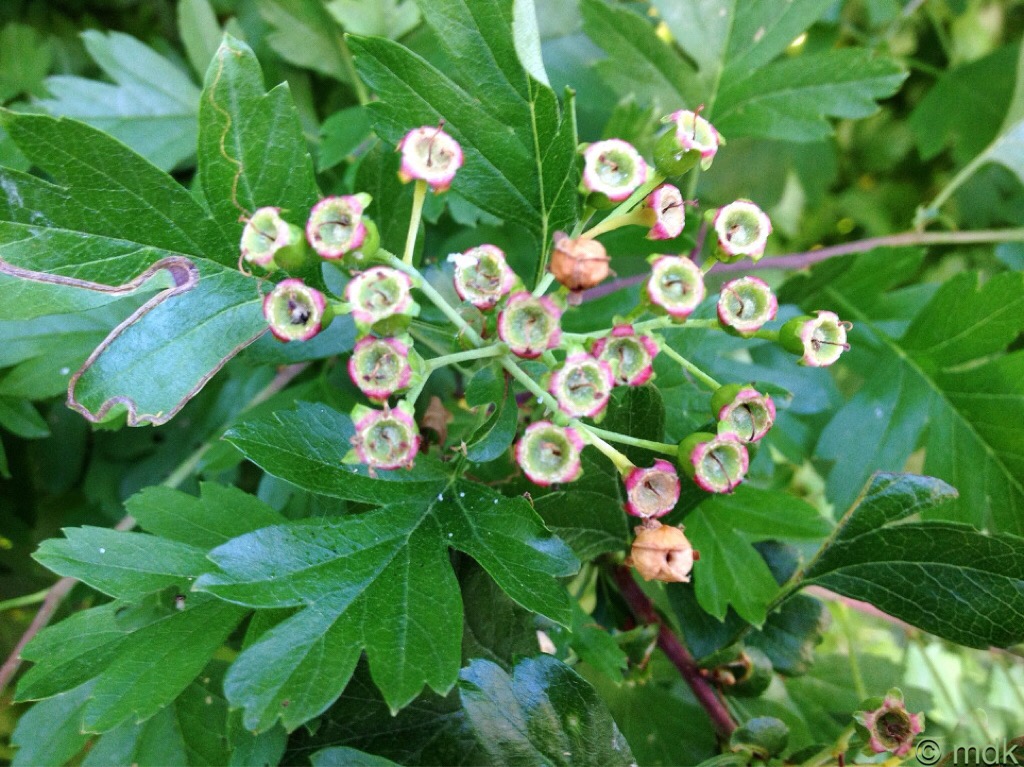 All too soon the woodland path ended and it was on through the network of little roads that lead to my house. The gardens are all looking especially nice right now and I find myself looking at the different plants with a jealous eye, wishing I had this and that in my own garden. This was especially true of some iris’ in one garden, a white one standing tall and proud with another deep purple leaning against it like a lover. 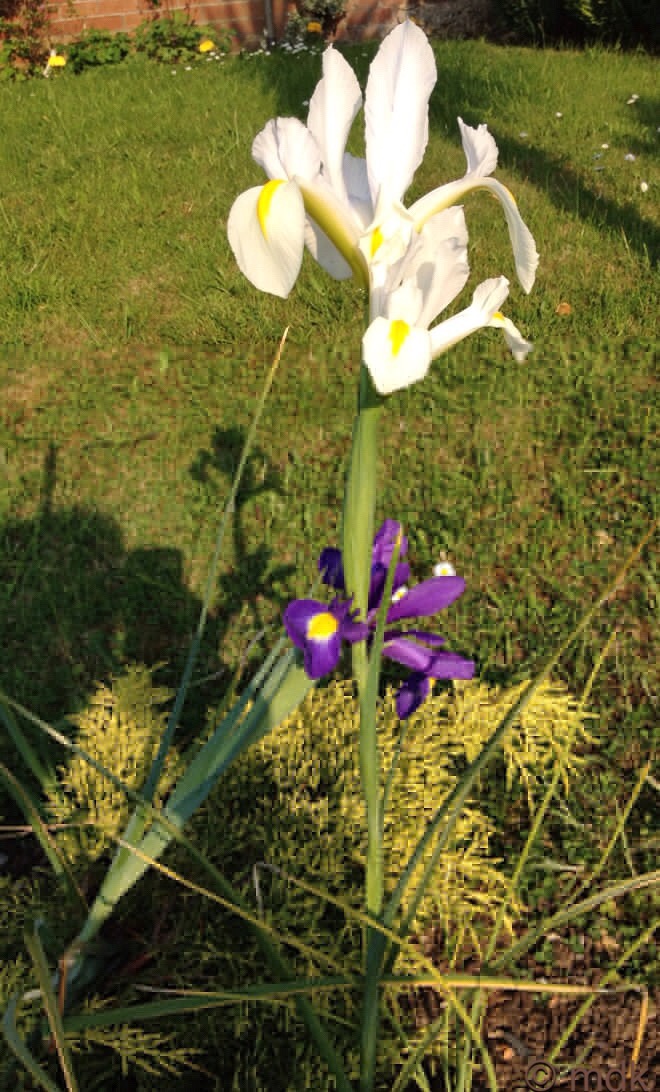 So I may have missed my walk this morning but I did make up for it later. Apart from the chocolate coated coffee beans, I did quite well on the food front too. The strawberries I bought at lunch time were wonderfully juicy and sweet and I left half of them in the fridge for tomorrow along with the rest of the coffee beans in my drawer. I also managed to come home with half of my planned work snacks. All in all it wasn’t a bad day on the Big Plan. wonder what tomorrow will bring?