Rather than go out in the freezing cold zero degree air, we decided to start the day wth breakfast in our hotel. It was also a bit of a reconnaissance mission as, with the marathon starting at 8:45, we would probably be having breakfast in house on Sunday morning too, as long as all Commando’s running nutrition requirements could be met. As it happened the coffee and juice were excellent, there was porridge, granola, seeds, nuts, dried fruit, croissants, interesting breads and, of course, the usual eggs, bacon, sausage and hot things. Breakfast in hotels is always a good people watching experience too and we were certainly not left wanting.

Two oriental ladies sat in their padded coats and spent the whole of their meal staring into their phones not speaking to each other. A family of three young girls and their mother arrived, from their accents either American or Canadian, all wearing their pyjamas. They seemed unconcerned that everyone else was fully dressed and proceeded to sit down to breakfast exactly as they would at home, with a lot of loud chatter and some bickering. Their mother wore a woolen beany hat throughout. A young Chinese couple in full business dress sat next to them trying very hard not to stare or laugh. Priceless entertainment. Then again, it’s quite possible everyone else was watching the odd English couple, all puffy eyes and thick winter clothes, and thinking us strange.

After breakfast we went to look at China Town and Kensington Market, mostly because Commando needed chocolate milk and bananas and this, the lovely Albert in reception told us, was the place to get them. Although it was almost ten o’clock when we stepped through the revolving hotel door and the sun was shining, it was freezing cold. My ears hurt within about three seconds and I regretted wearing my cap rather than my thick beany. At least I had my gloves and scarf.

The homeless man was awake now, still in the same spot and huddled under his blankets against the biting air. People were passing without giving him a second glance, probably on their way to work, too busy to even see him. He seemed fairly young, maybe in his late twenties, with a disheveled beard and thick woolly hat. Commando gave him some money.
“Go and get yourself a warm drink or something to eat,” he said. “No one should have to sleep on the street in this weather.”
I swear I saw a tear in his eye.

Armed with the new map Albert gave us to replace the one that had disintegrated because of the rain, we set off in the direction he’d told us. Pretty soon we knew we were on the right track. All the Chinese signs and bright decorations gave the game away a little. The wall of a bakery had the most beautiful mural of a dragon and, much to Commando’s annoyance, I had to stop for a photo. You’d think he’d be used to it by now really. Even so  I tried to restrict my photo taking as best I could. As expected, Kensington Market was nothing at all like Kensington in London. There everything has a designer label and a price tag to go with it. Toronto’s version is in an older part of the city with lots of Victorian buildings and fabulous art work. In fact this distinctive multicultural area is designated a National Historic Site and I was having real problems keeping my phone in my pocket. In Augusta Avenue I couldn’t contain myself when I saw a beautifully colourful, slightly Banksyesque mural on the side of a building.  Further on a Mucha inspired wall had me snapping away again. In front of it a car was trying hard to get into the graffiti act in a stunning display of colour that even extended to the hub caps. Yet another building was teaming with brightly coloured cartoon monsters. At this point, Commando gave up tutting and let me get on with it. 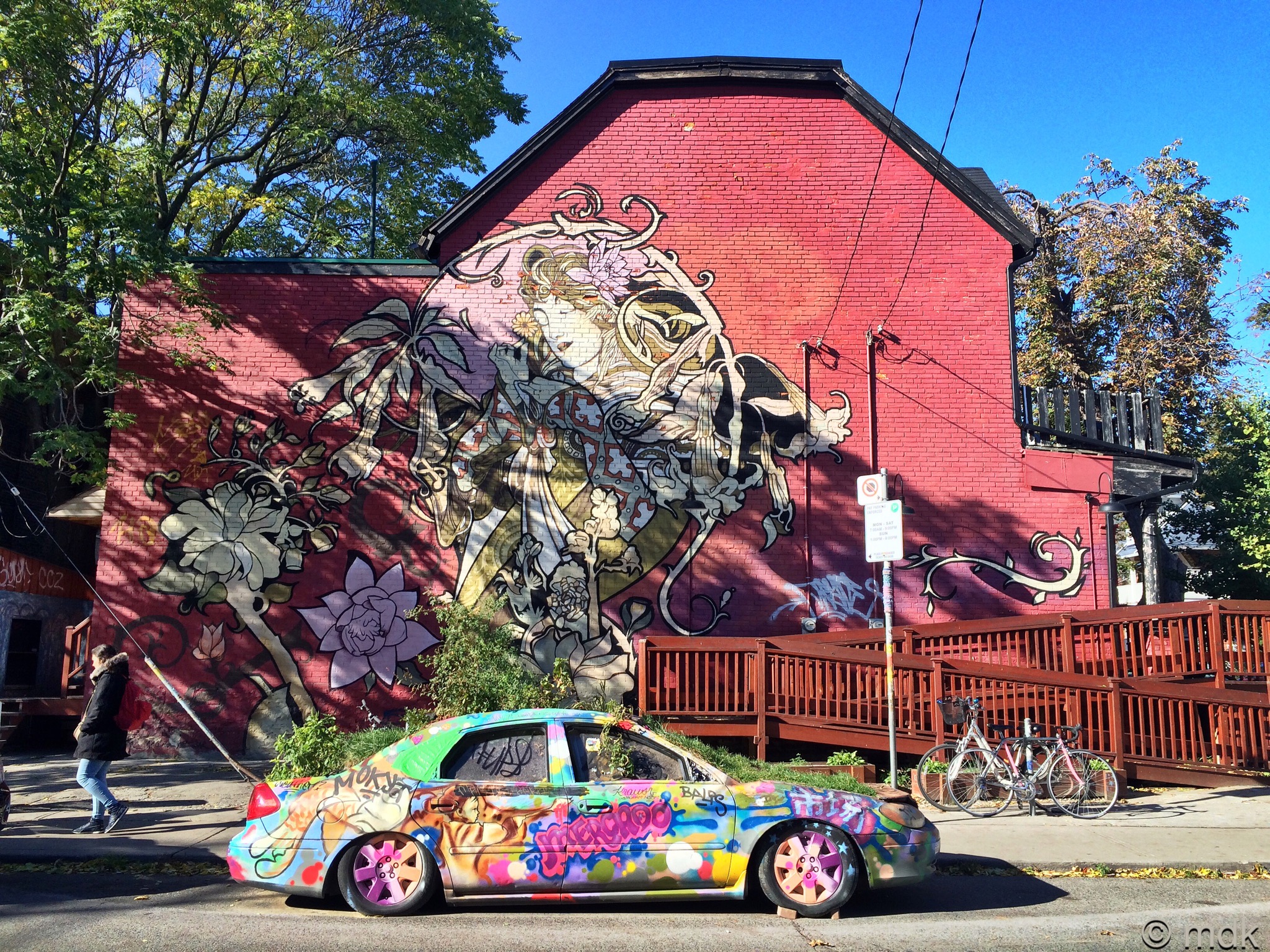 We did stop staring at interesting buildings long enough to find a shop that sold chocolate milk and we even managed to get some bananas and razor blades (Commando had forgotten to pack his and was getting a bit hairy). With our little bag of shopping we turned back towards the hotel. Passing the Organic Juice Press store with its monotone decor and murals I wondered if there was a rule that cars could only park here if they were colour coordinated. A huge black car was parked outside in perfect harmony with its surroundings. Almost every building had a mural of some kind. One building that appeared to be covered in plywood had the most amazing array of dogs, cats and birds that extended right along the fence. Commando was very taken with a garden filled with sculptures made from what looked to be old scooters. They were a wonderful array of mechanical looking creatures but the bright sun created dark shadows that made getting photos difficult. When we got to the end of Augusta Avenue and its junction with Dundas Street West we discovered that even the street fixtures came with a graffitiesque twist. A large pole on the corner that looked like a cross between a lamppost and a Belisha beacon was not only brightly coloured but it appeared to have metal arms. The globe on top really was a globe and, sitting at the pinnacle was a cat. What on earth it all meant was beyond me but I took a couple of photos anyway. 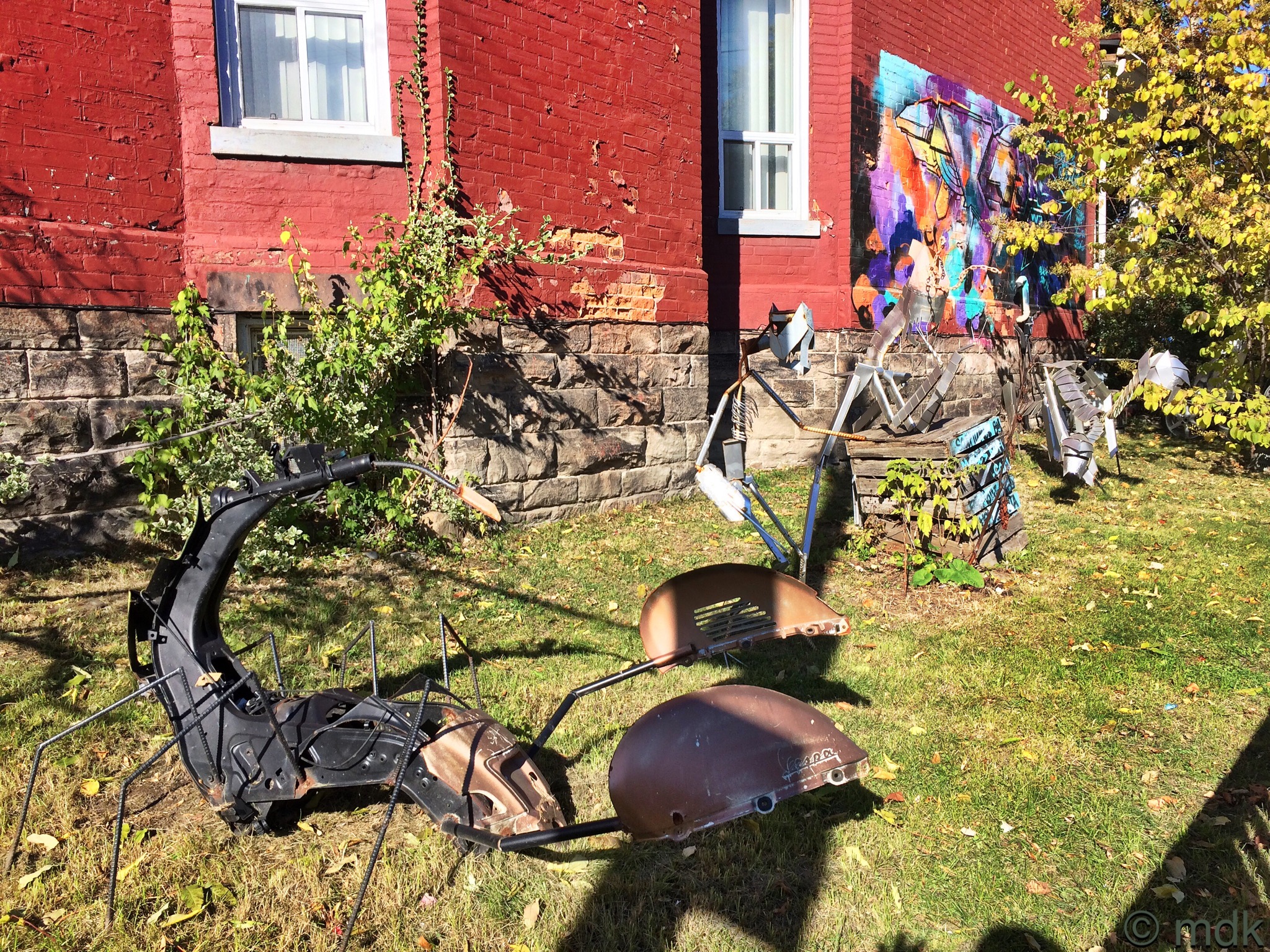 The last piece of stunning graffiti came when we were almost back at our hotel. On the corner of Spadina Avenue and Queen Street West, with the CN Tower in the background we found the most beautiful piece of all, a young black man in a baseball cap with a tear in the corner of his eye and a street scene behind him. It was quite haunting. Of course the phone came out again and Commando didn’t even sigh. As it was the day before the marathon Commando needed it to be a fairly chilled affair with a good deal of food and hydration. The next thing on the agenda was a coffee stop and maybe a cake. Luckily, there was a Starbucks right in front of our hotel so we retired there to warm up a bit. It was heading rapidly towards midday and the temperature had hardly risen above zero. Hopefully marathon day would be a little warmer.