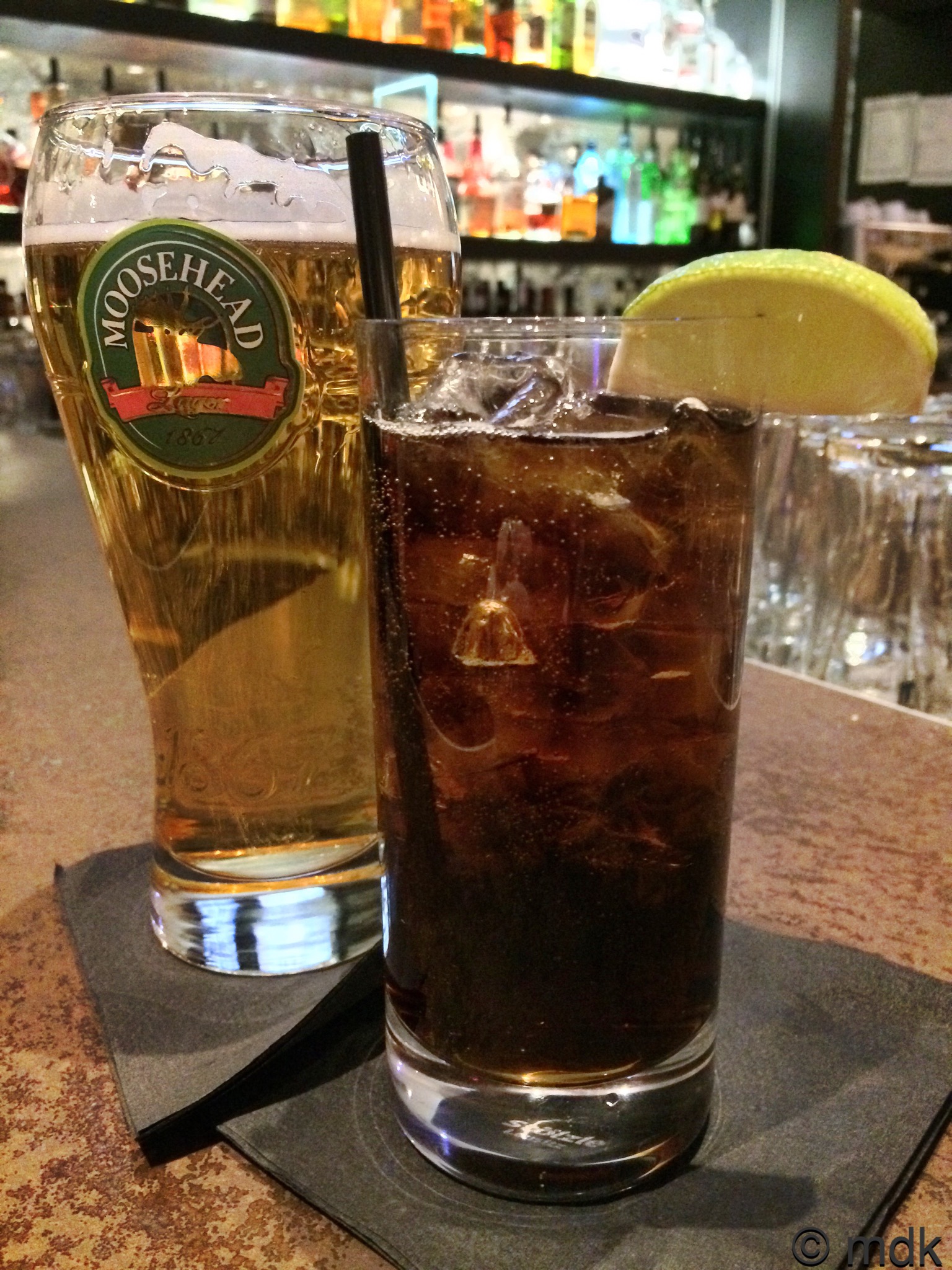 After the race we had a lazy afternoon for the most part. Apparently, running twenty six point two miles takes it out of you a bit. Commando had a chat with David in reception about having lunch at the CN tower and we did venture out during the evening in search of food. Once again, standing on the street looking slightly bewildered attracted some local assistance. A kind man stopped to ask if we were lost. When we said we were looking for somewhere to eat he directed us towards Queen Street.
“There are lots of places to eat around there,” he said.
Commando settled on fish and chips, wondering how they would compare to the ones at home. As it turned out, they were different but very nice. Back at the hotel we treated ourselves to a drink at the bar and whiled away an hour chatting to an American woman who’d also run the marathon.

After a breakfast of parfait and hot chocolate in Starbucks, our first job was to check on the car. Tomorrow’s plan was to drive out to Niagra  and, as we’d more or less abandoned Maggie’s car when we arrived, we thought we’d best check it was still there, plus Commando wanted to retrieve his sunglasses. We actually tried to get them before we went to dinner last night but the door to the car park was locked so we gave up.

This simple task turned out to be something of a nightmare. Back at the car park entrance the door was still locked. This didn’t seem right at nine thirty on a Monday morning. Perhaps we were missing something? Back outside the hotel we consulted with the valet parking man and it turned out we’d been at the wrong door all along. Naturally, we’d gone back to the door we came out of when we arrived, in actual fact this was only an exit and we had to go around to the other side of the building to the entrance.
“It’s a bit confusing down there,” the valet said, “you might have to look around a bit before you find your car.”
“I took note of what level it was on,” I said, feeling confident. Famous last words.

Finally down in the bowels of the underground car park we went straight to level three but, after quite a bit of wandering about, we couldn’t find the car.
“Something doesn’t look right about this place,” Commando said. “When we drove in I remember there being big yellow barriers on all the corners and there aren’t any here.”
“I’m sure the numbers were green too,” I said, looking at the blue triangular markings on all the pillars telling us we were on level three. “Do you think we’re in the wrong car park?”

Back at the beginning we started all over again with the same result. We’d explored the whole of level three and now we were on level two. The signs were still blue and triangular and I was sure they’d been green and square when we arrived. Feeling rather worried we began to try to find our way out. Even this was proving to be difficult and now we were on level four. Then, just as we were about to give up, we saw at door with a green sign for level four. This seemed more like it, even if it wasn’t the right level. Inside there was a lift. We chose level three with fingers crossed and emerged into a car park with square green signs and yellow barriers on all the corners. Within minutes we’d found the car. Obviously there were two car parks, probably one for valet parking and one for self parking and we’d been in the wrong one all along.

We had a while before we needed to be at the CN Tower but we decided to go down there anyway and explore the area.
“The Blue Jay’s stadium is right next to it so we could take a look at that,” Commando said.
So we set off on what was rapidly becoming a familiar route along Simcoe Street towards Front Street and the tower. Near the food court where we’d had our Hero Burgers there was a statue I wanted a closer look at. It showed a workman in a hard hat kneeling to chisel out the words Remembering Our Past…Building a Safe Future on the granite wall around the precinct of the shopping complex. Intriguing. 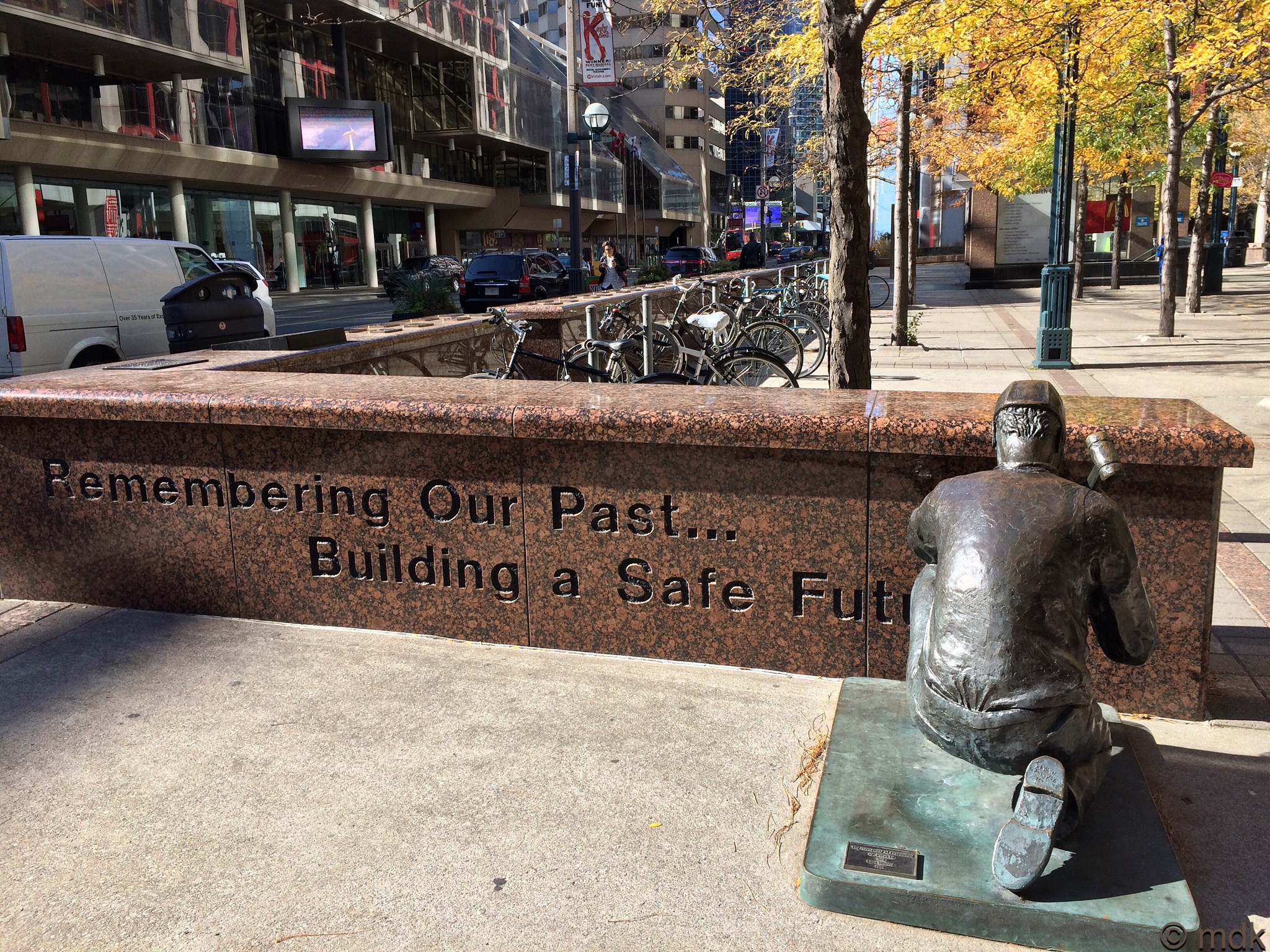 This, it turns out, is called Workers Monument and is a gift from the Workplace Safety and Insurance Board to honour the lives of those lost to workplace injuries or illnesses. There are actually two seperate artworks, the workman, called Anonimity of Prevention by Derek Lo, and Lana Winkler and another, more subtle piece. Previously we’d not noticed these little bronze plaques all along the top of the wall but when we stopped to look they were really food for thought. 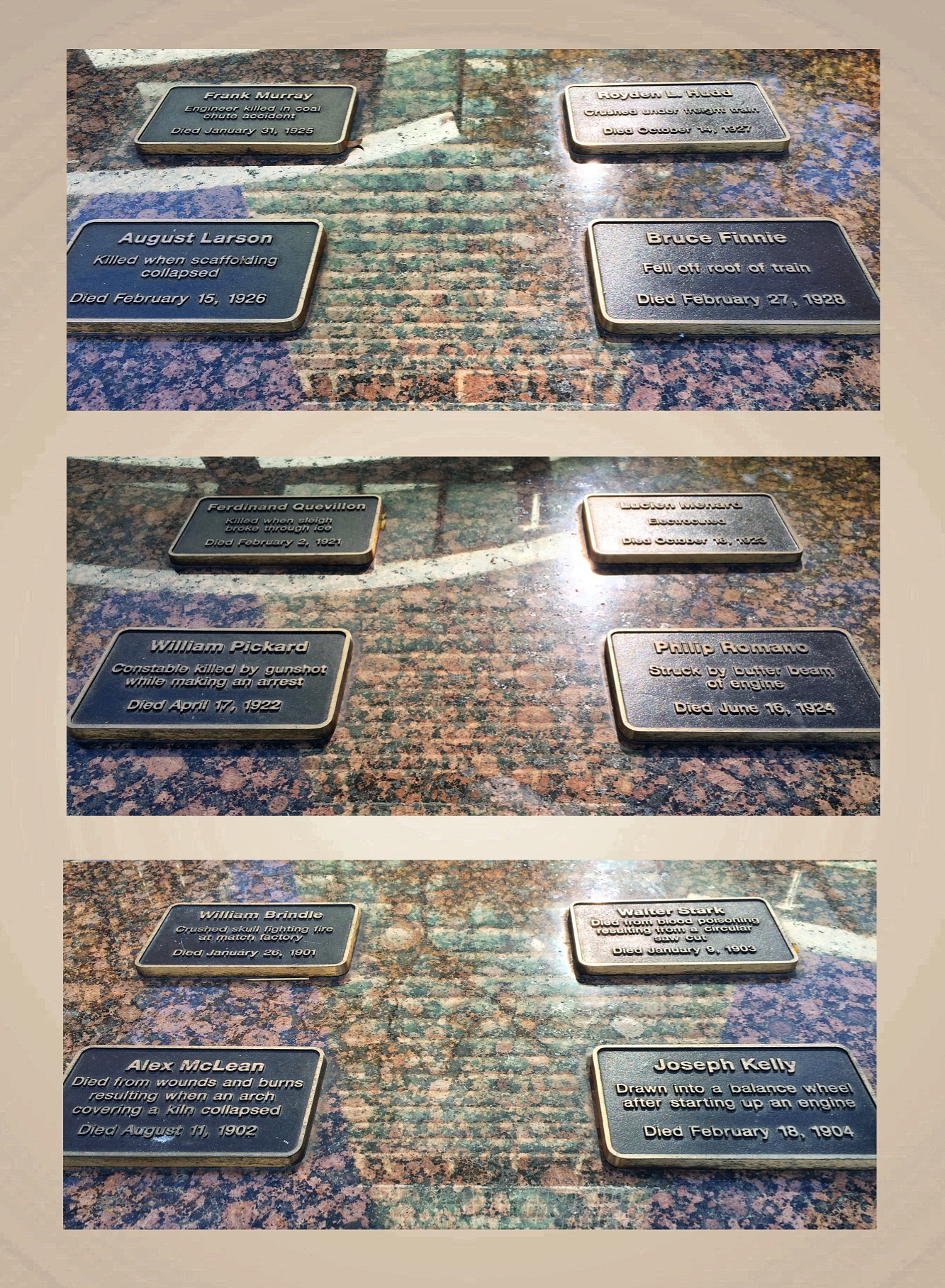 The work is called 100 Workers and was created by John Scott. Each little plaque represents a year between 1901 and 2000 and gives details of a worker who died that year, when and how they died. The plaques made sobering reading with electrocutions, train accidents, and some truly horrible sounding things. One stood out as something that would never happen in England, it said simply Edmund Tong, bullet wound in chest, died March 6, 1952. It made us wonder what kind of work he did and how he got shot. What a thought provoking memorial. 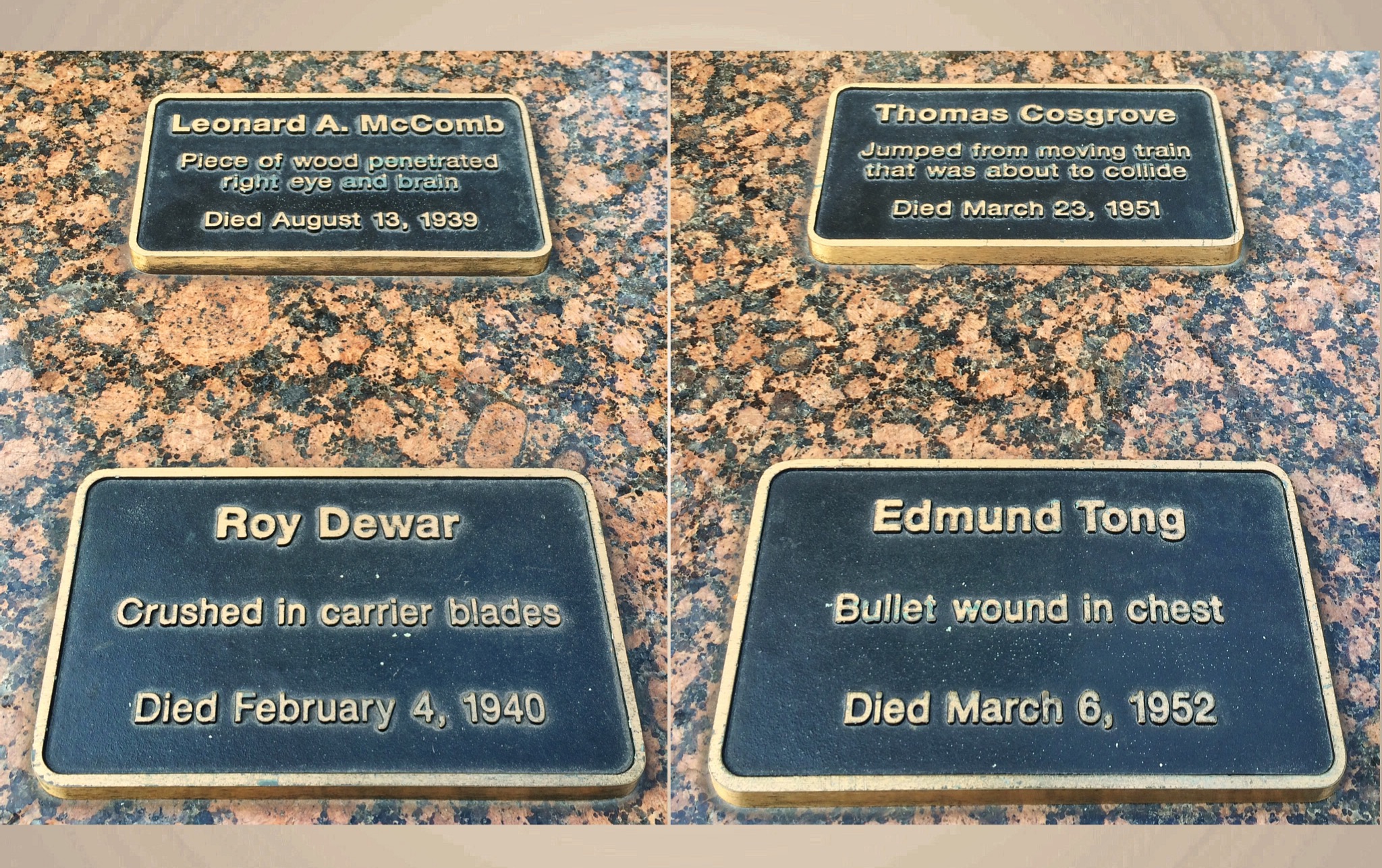 Almost opposite was the CN Tower and the Blue Jays Stadium. We were still way too early for our lunch reservation so we wandered up beside the stadium for a closer look. The third match in the series would be played later in the day and, although the Blue Jays had lost the first two there was still hope. Huge blue electric signs at the bottom of the slope said ALLEZ-Y! (the equivalent of Come On You Reds for a Saints fan). So much in Canada is in both French and English there were times when I didn’t know which language I was reading.

At the top of the slope we were right in front of the stadium and above us an amusing bronze of a crowd of Blue Jays fans leaning over balconies cheering their team on. We strolled along the side of the stadium through an arch of blue and white balloons and down the steps onto Bremner Boulevard. The whole entrance was bedecked with balloons and banners and a few stalls were being set up, probably the usual hot dog/burger vans we have outside our own stadium in England. It was a real carnival atmosphere despite the previous results. I hoped they won game three. 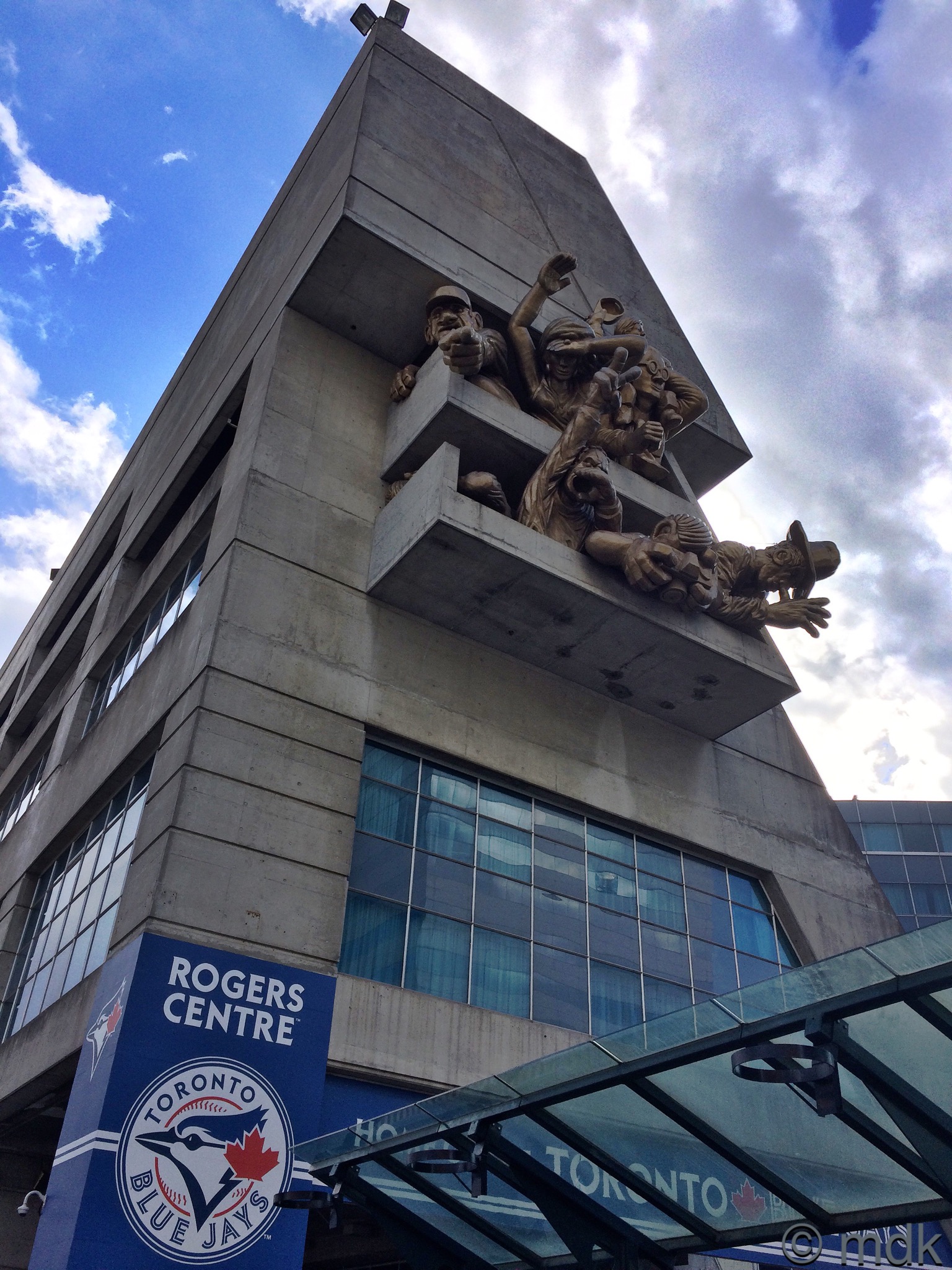 Next to the stadium was a delightful pond, round, with a mini waterfall running down the stepped sides. To complete the picture a mass of jumping  metal salmon. Behind, at the top of the tower, tiny red dots were slowly making their way around the edge of the main pod. These, we knew from the posters we’d passed, were edge walkers, people who had actually paid money to walk the circumference of the tower on the outside! They are, of course, tethered but still…
“We could do it if you like,” Commando said.
“Ok then,” I replied.
“You’re joking, right? There’s no way you’d get me up there.”
“Of course I’m joking. They’re all completely bonkers. Even if you gave me a million pounds you wouldn’t get me to do it.” 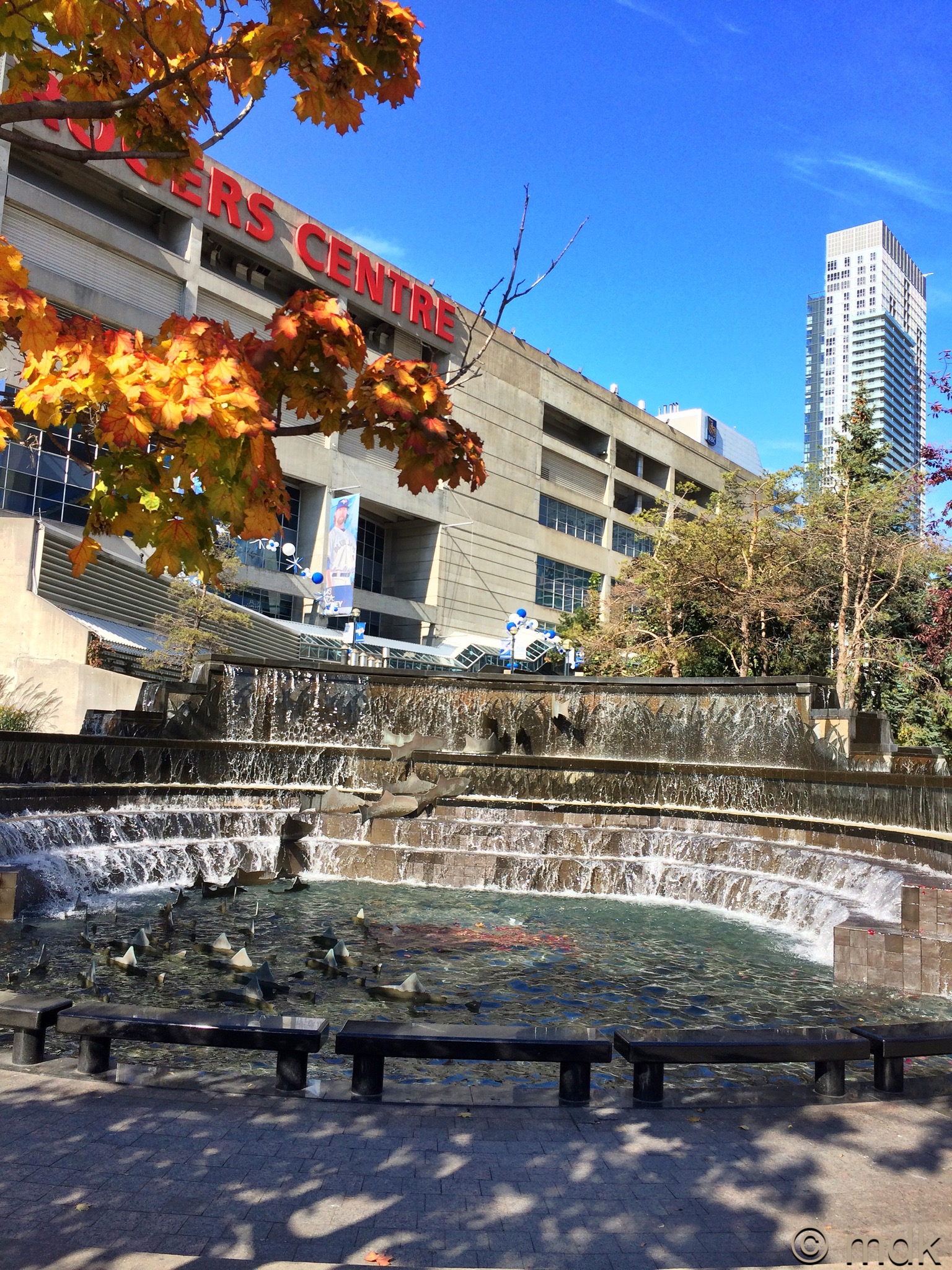 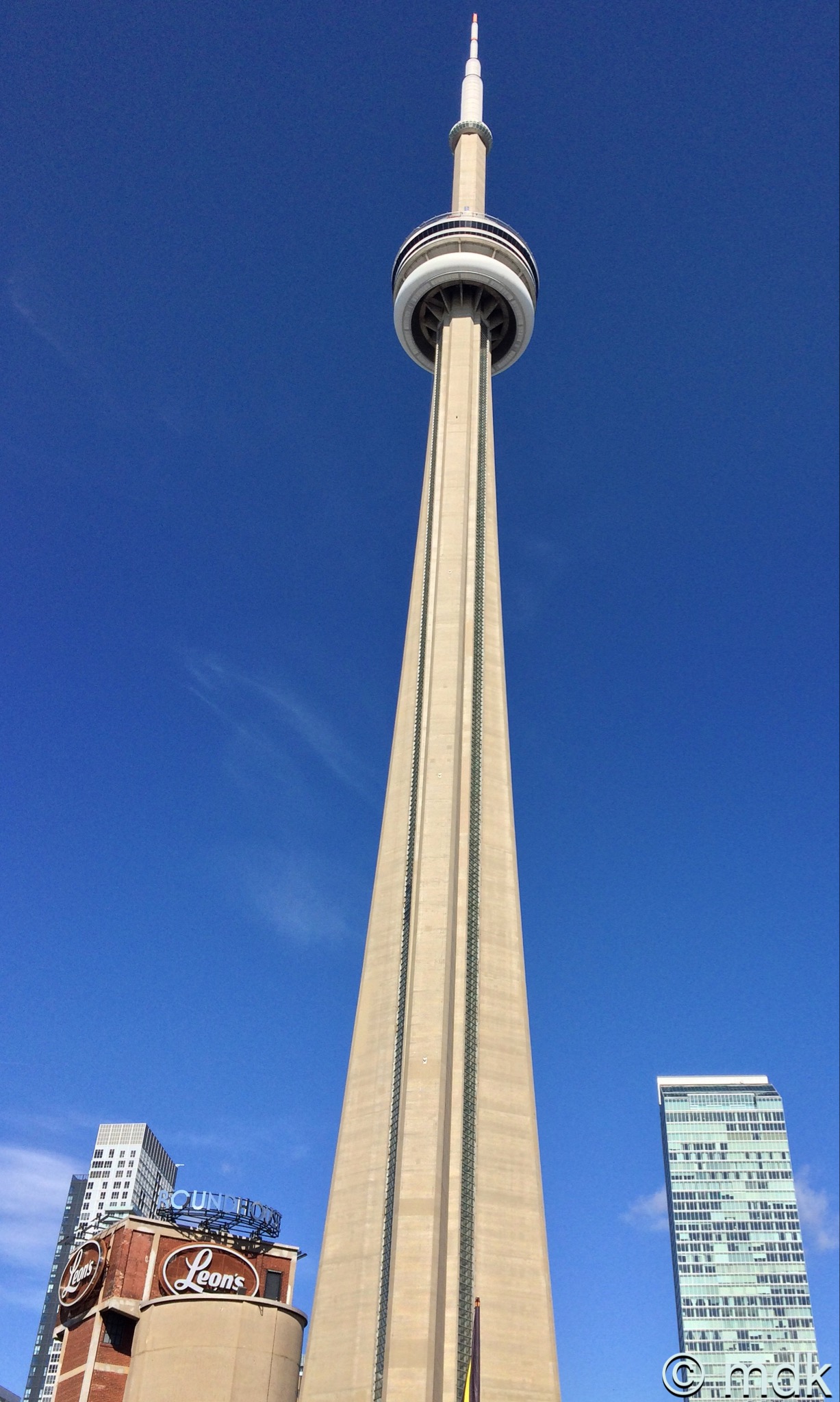 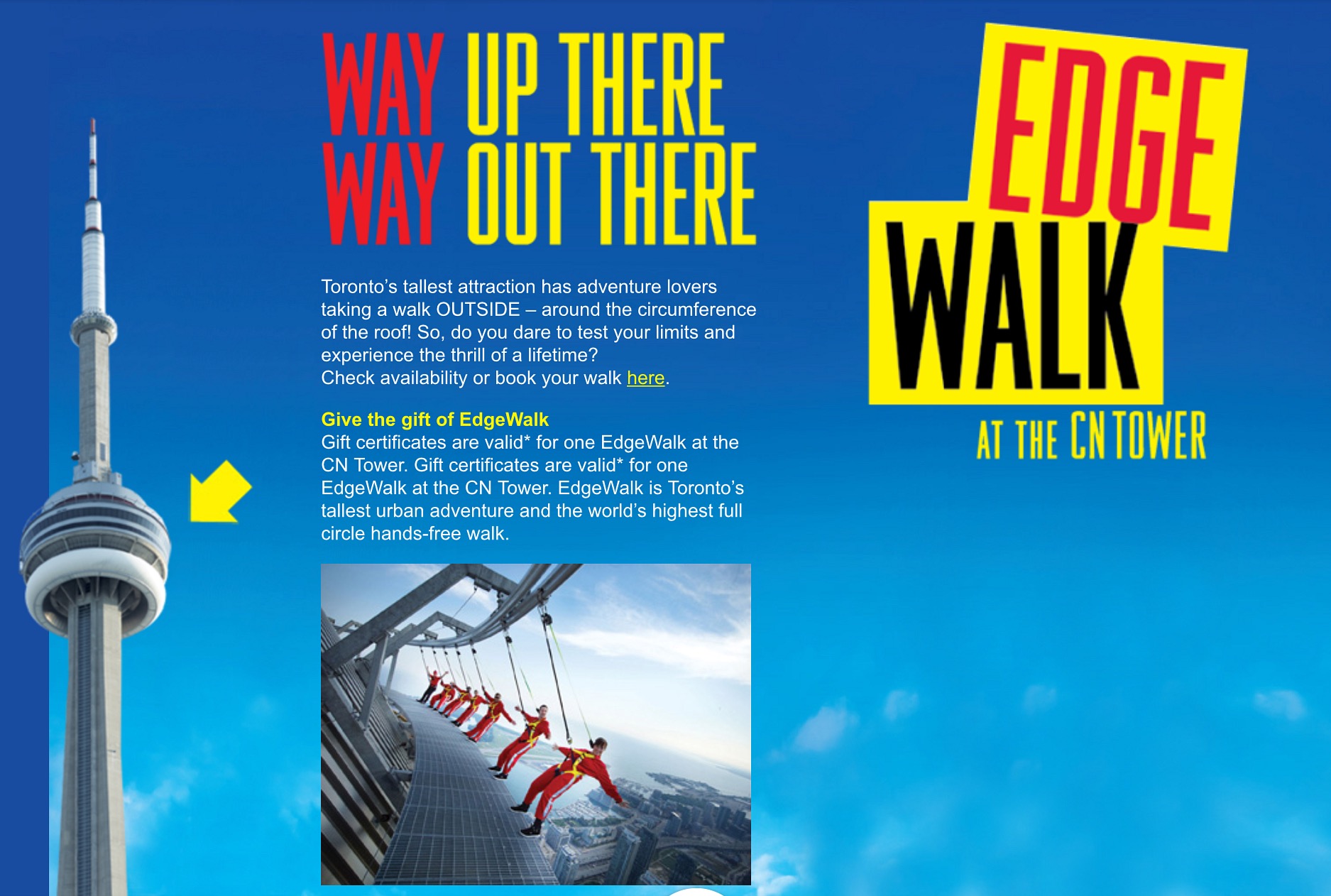 As we turned around soomething on the other side of the road caught our attention. It looked interesting and we still had quite a while until lunch so we decided to investigate. What we’d discovered, although we didn’t know it at the time, was Roundhouse Park, named for the John Street Roundhouse, a preserved locomotive roundhouse built between 1929 to 1931 for the Canadian Pacific Railway. The roundhouse is a semi circular building around a turntable, used for servicing locomotives. The turntable allowed trains, which in those days could only move forwards, to move in and out of the building. Better still, as this is also home to the Toronto Railway Museum, there were plenty of old trains to look at. 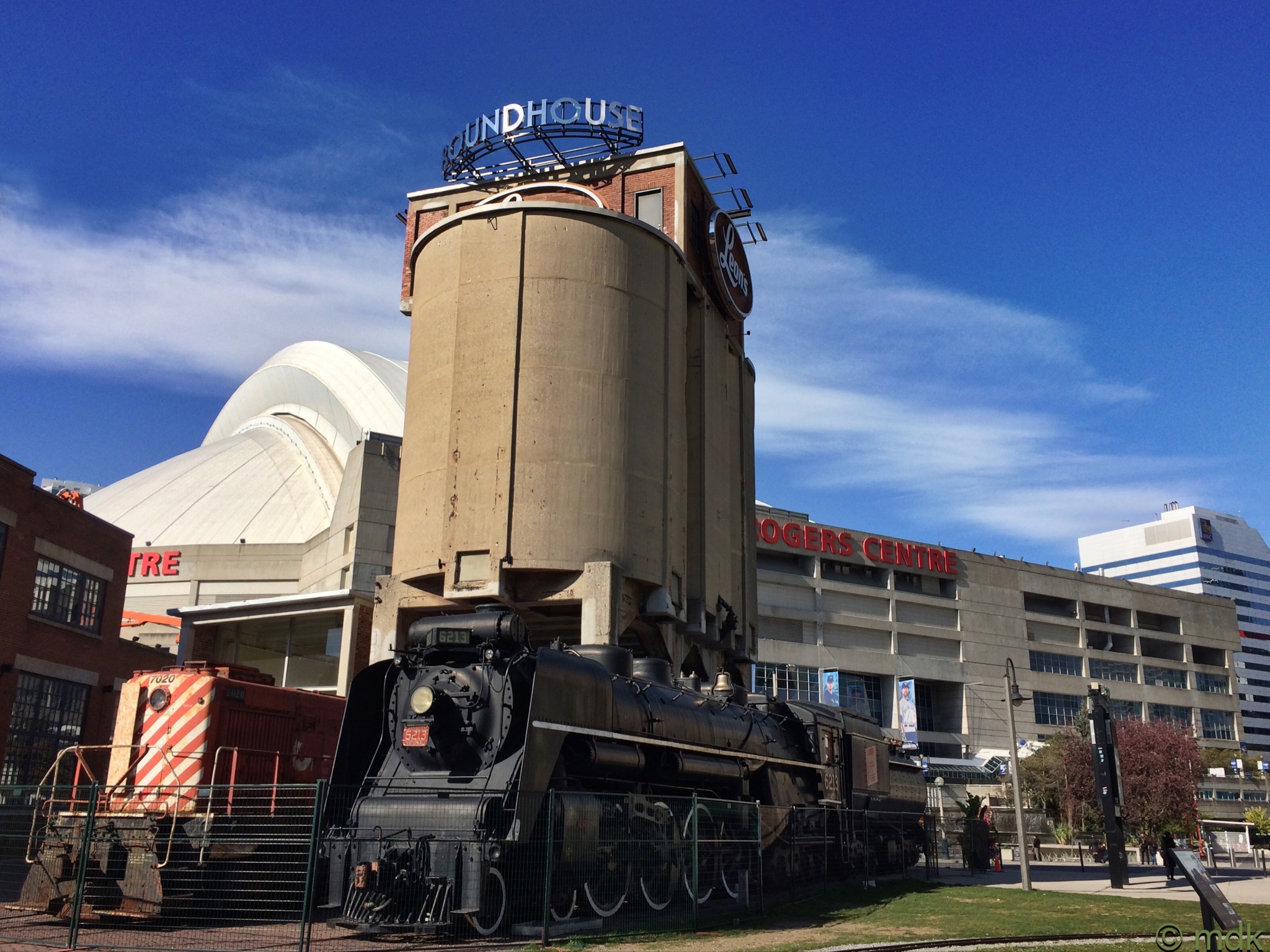 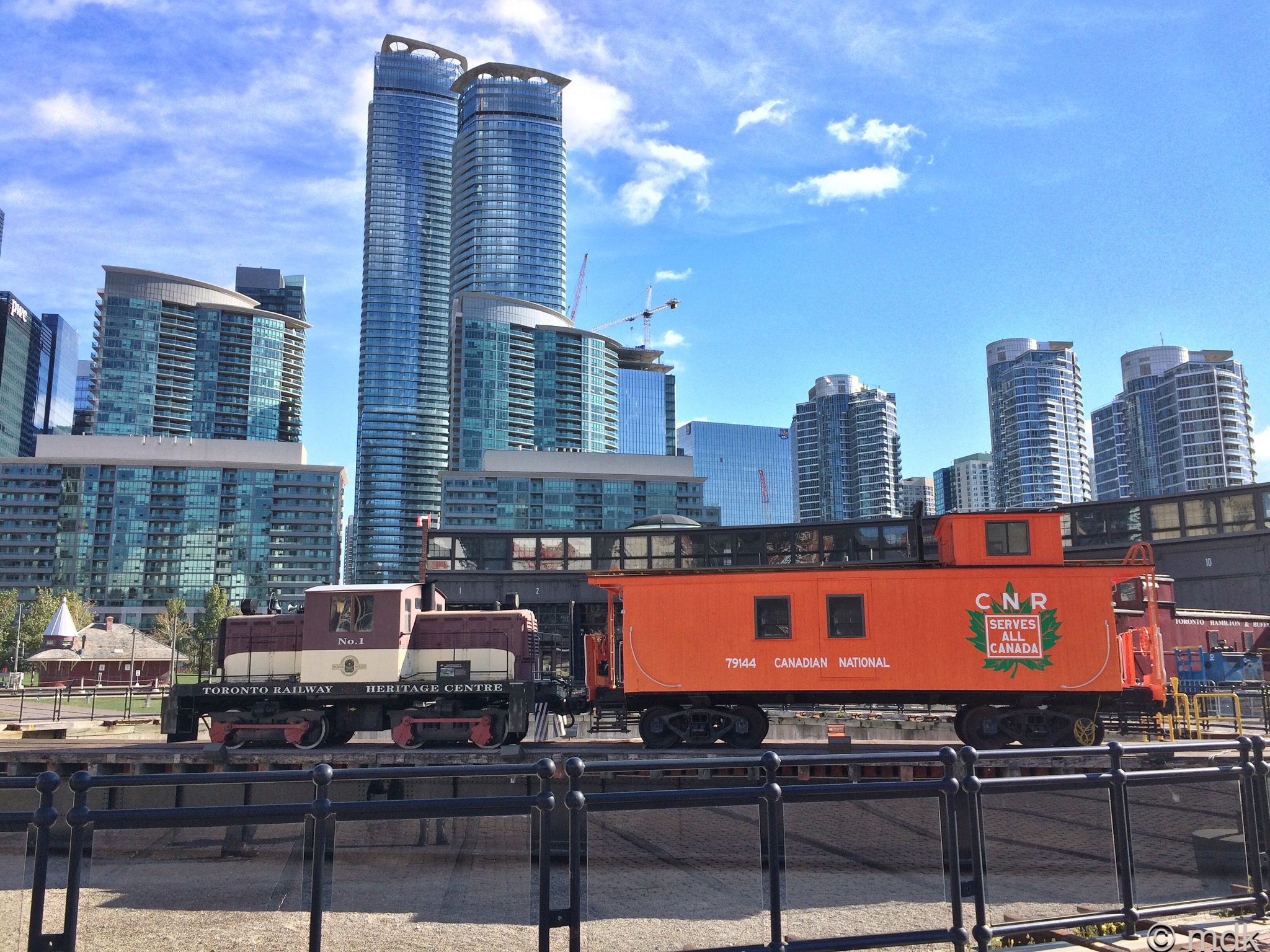 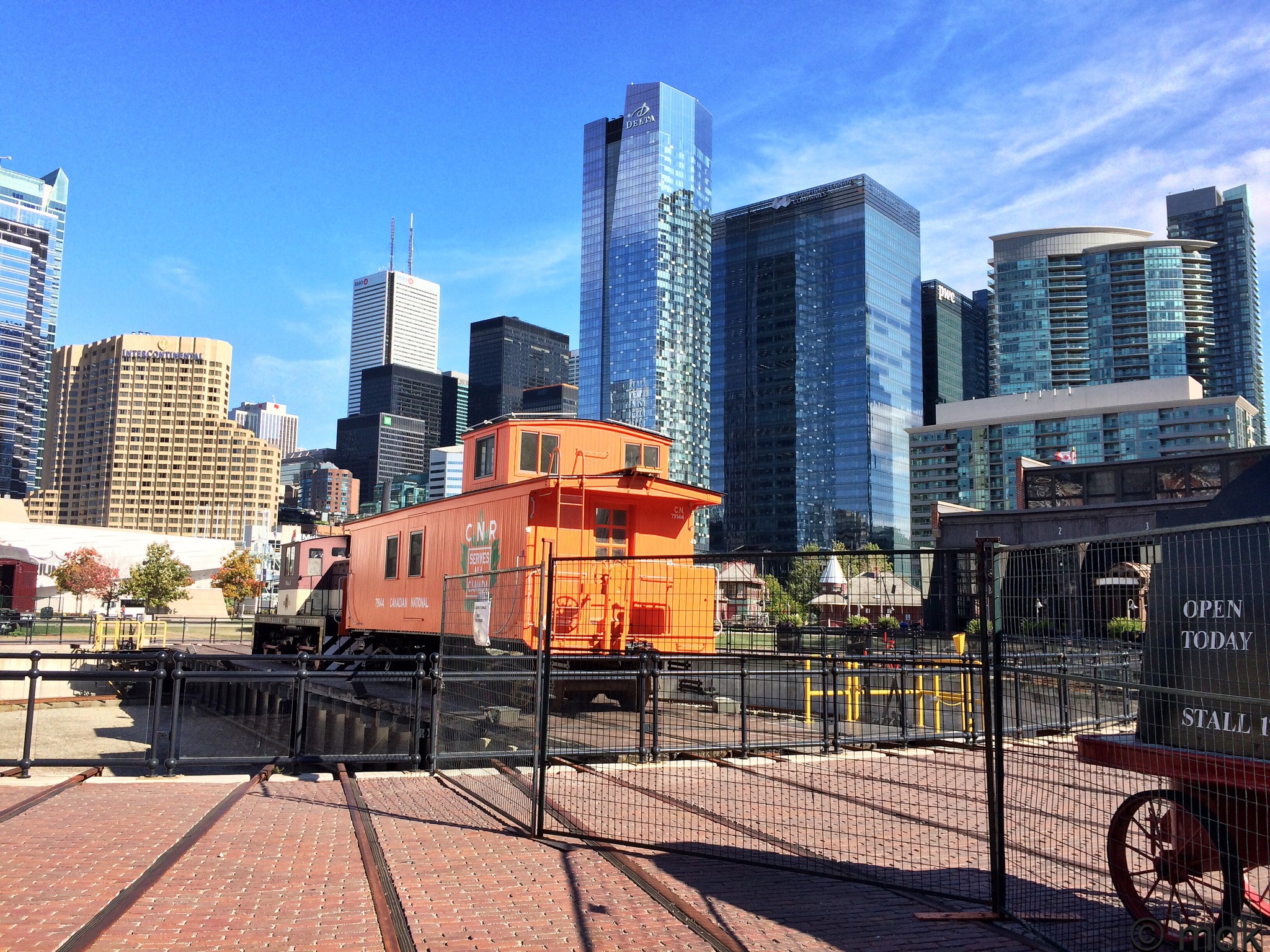 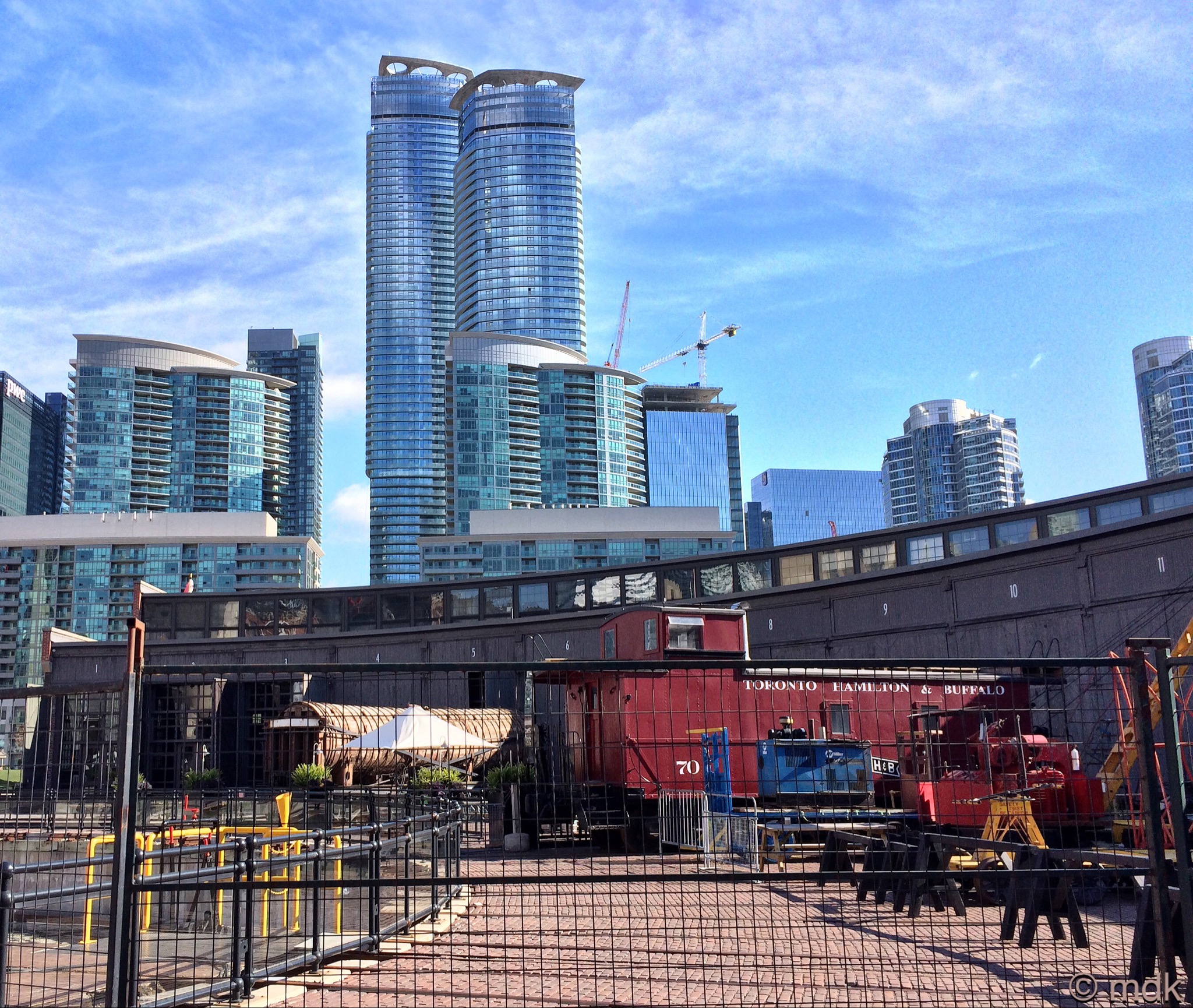 Sadly there was no time to go inside and look at the restoration facility where trains were once so well maintained they were known for their ‘John Street polish.’ Until 1986, when it was last in use, thirty two trains could be worked on at the same time, moving back and forth on the one hundred and twenty foot turntable built by the Canadian Bridge Company. We did have time to stroll around looking at the old engines and carriages. In fact I don’t think Commando would have let me pass them by even if I’d wanted to. Railway buffs can find out more about the trains on this link. 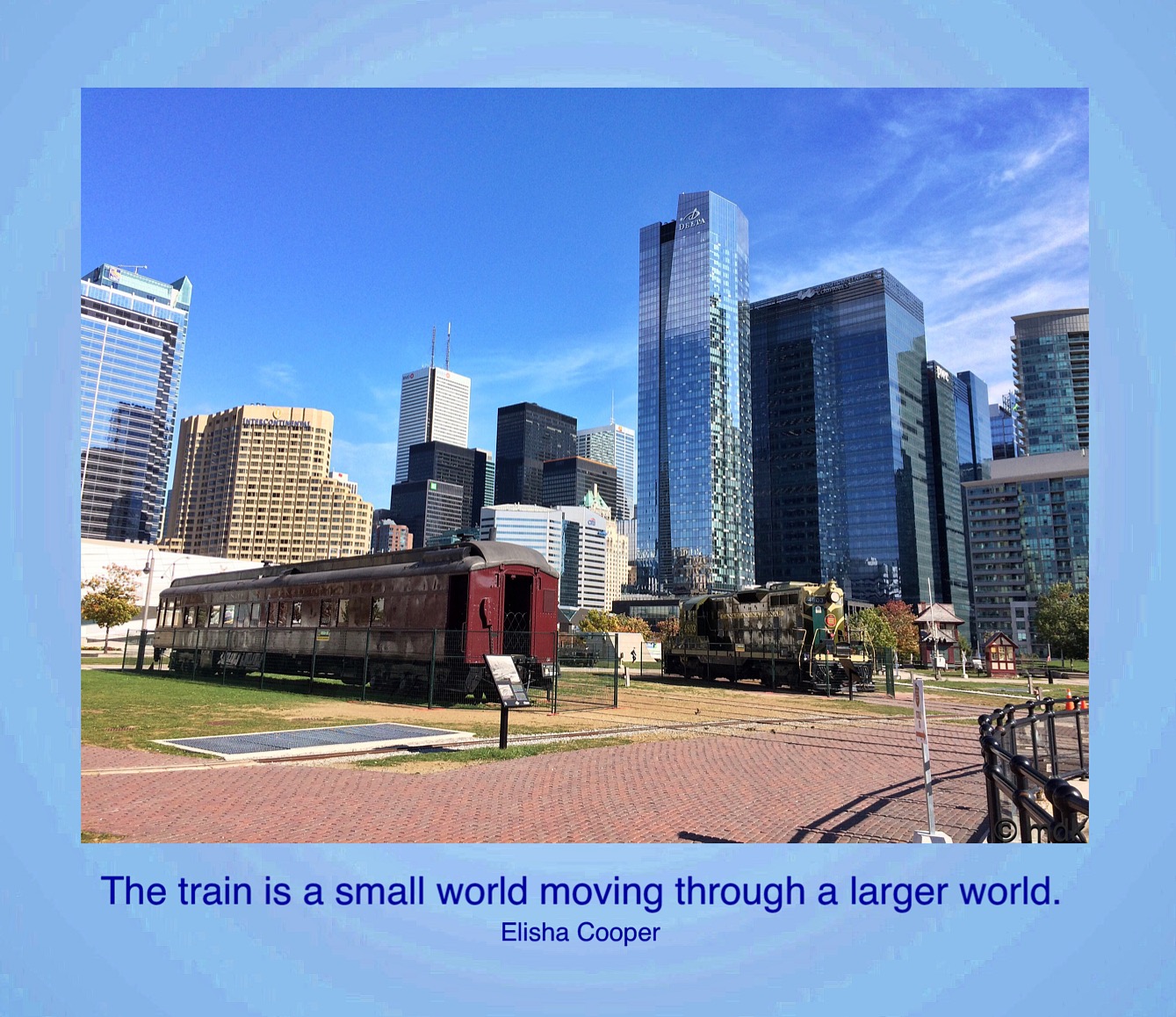 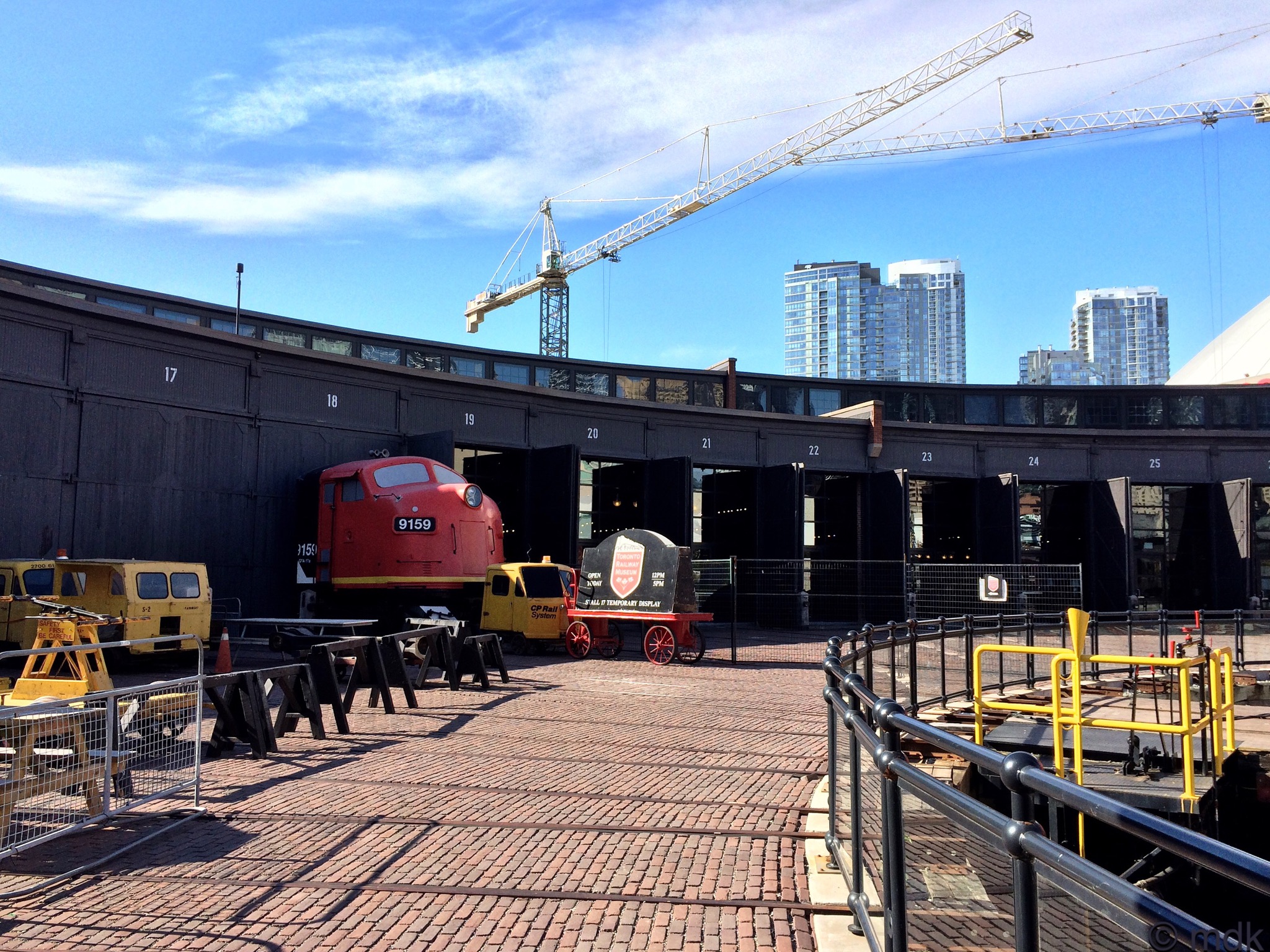 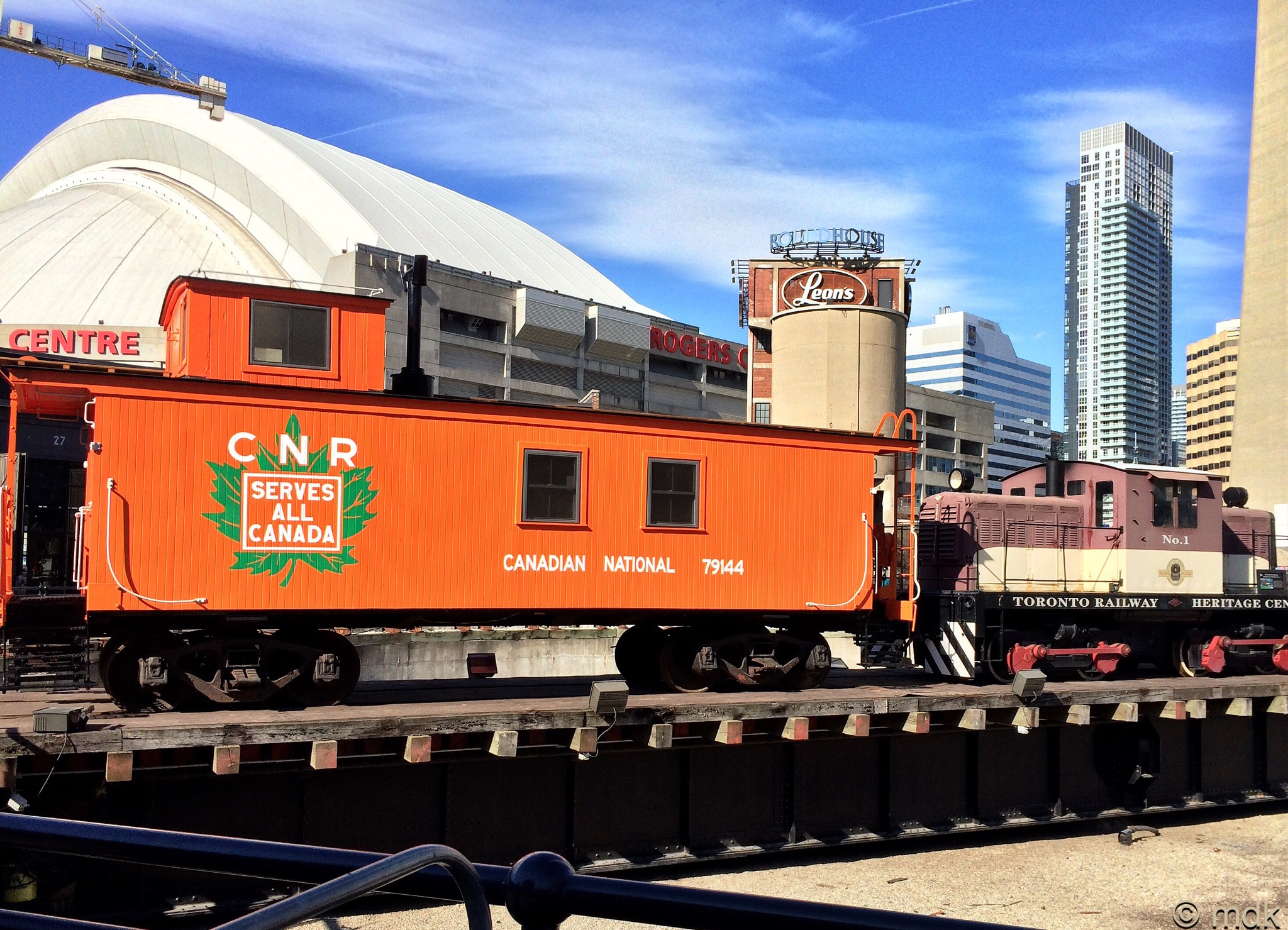 One carriage in particular looked a little different, mostly because it seemed to be made of wood. A quick read of the information board told us it was a vinegar car, built in 1938 and used by the Reinhart Vinegar Company to transport vinegar to Dallas, Texas. It seemed strange to build a tank from wood but, apparently, vinegar cars were made from wood because the acidic vinegar would quickly corrode a steel tank. This one was in a poor state of repair but is something of a rarity, there may be as few as four surviving in the whole of North America. 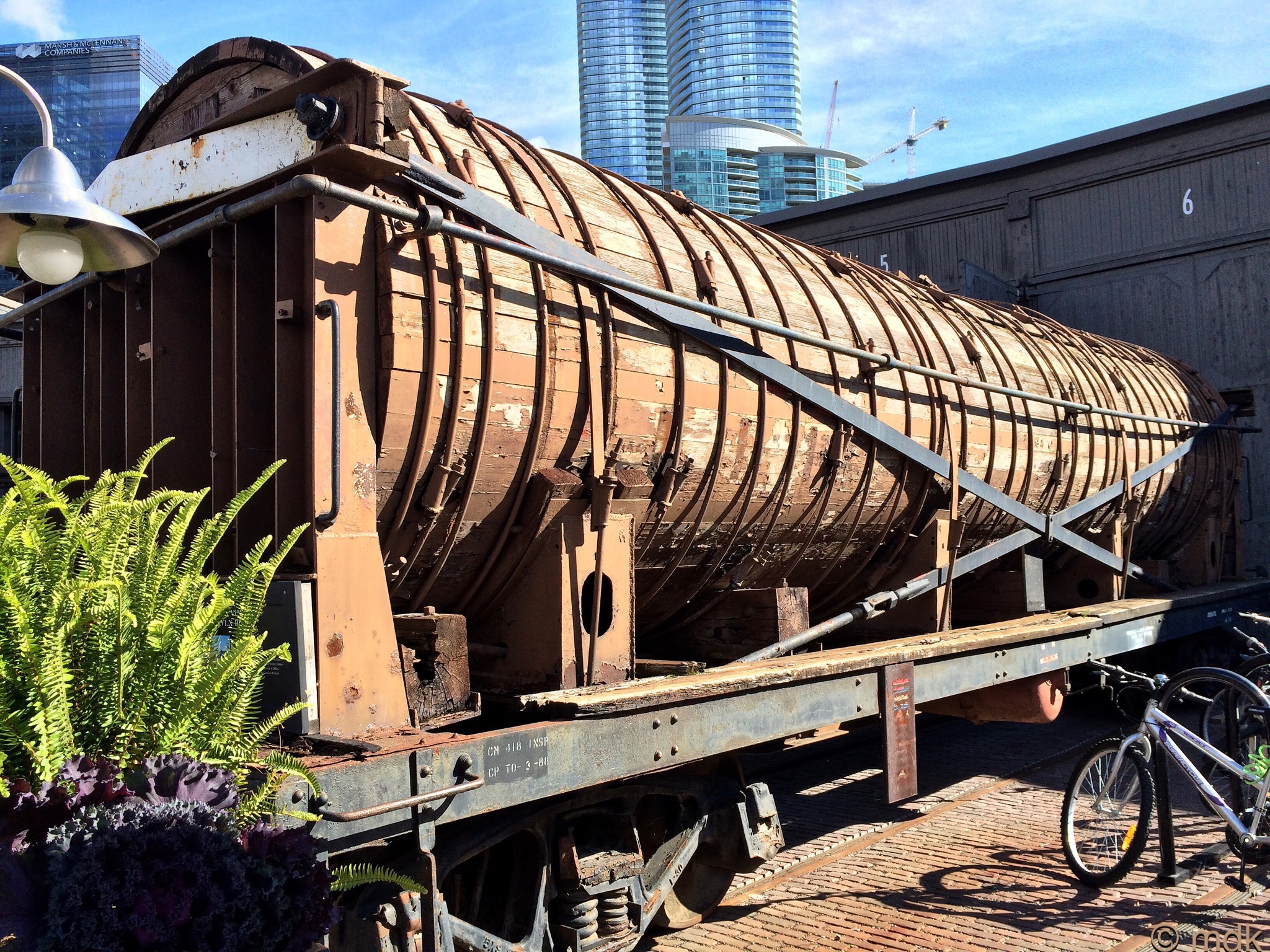 Once we’d had our fill of trains we moved on to the quaint little railway village. Dwarfed by their backdrop of skyscrapers, the lovely old buildings, including Don Station,  Signal Cabin D, a tool shed, a Watchman’s shanty, a Water Tower and a coaling tower, have been restored and moved here from various places. The station, built in 1896, originally stood at Queen Street East on the western bank of the Don River and is still used as a ticket office for the Roundhouse Park Miniature Railway. We saw the tracks for the latter but, sadly, none of the trains. Perhaps it’s only runs in the summer. 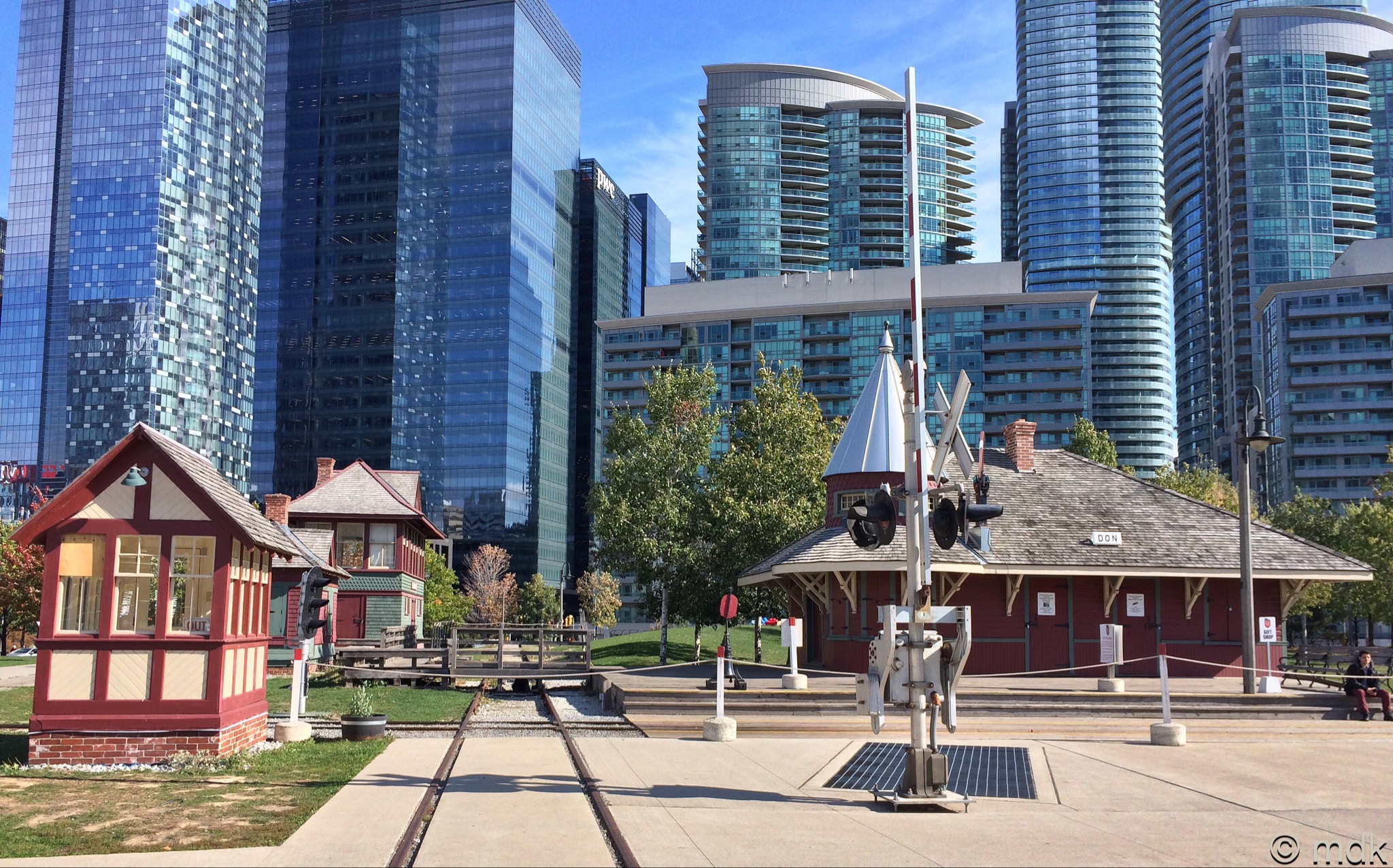 The next building we came to was the Steam Whistle Brewery, founded by three former employees of the Upper Canada Brewing Company. Not only do they brew their very own premium Pilsner lager, using just four natural ingredients, but they offer tours. If only we’d known before. It was tough to drag Commando away but we really needed to be heading back towards the CN Tower at this point. 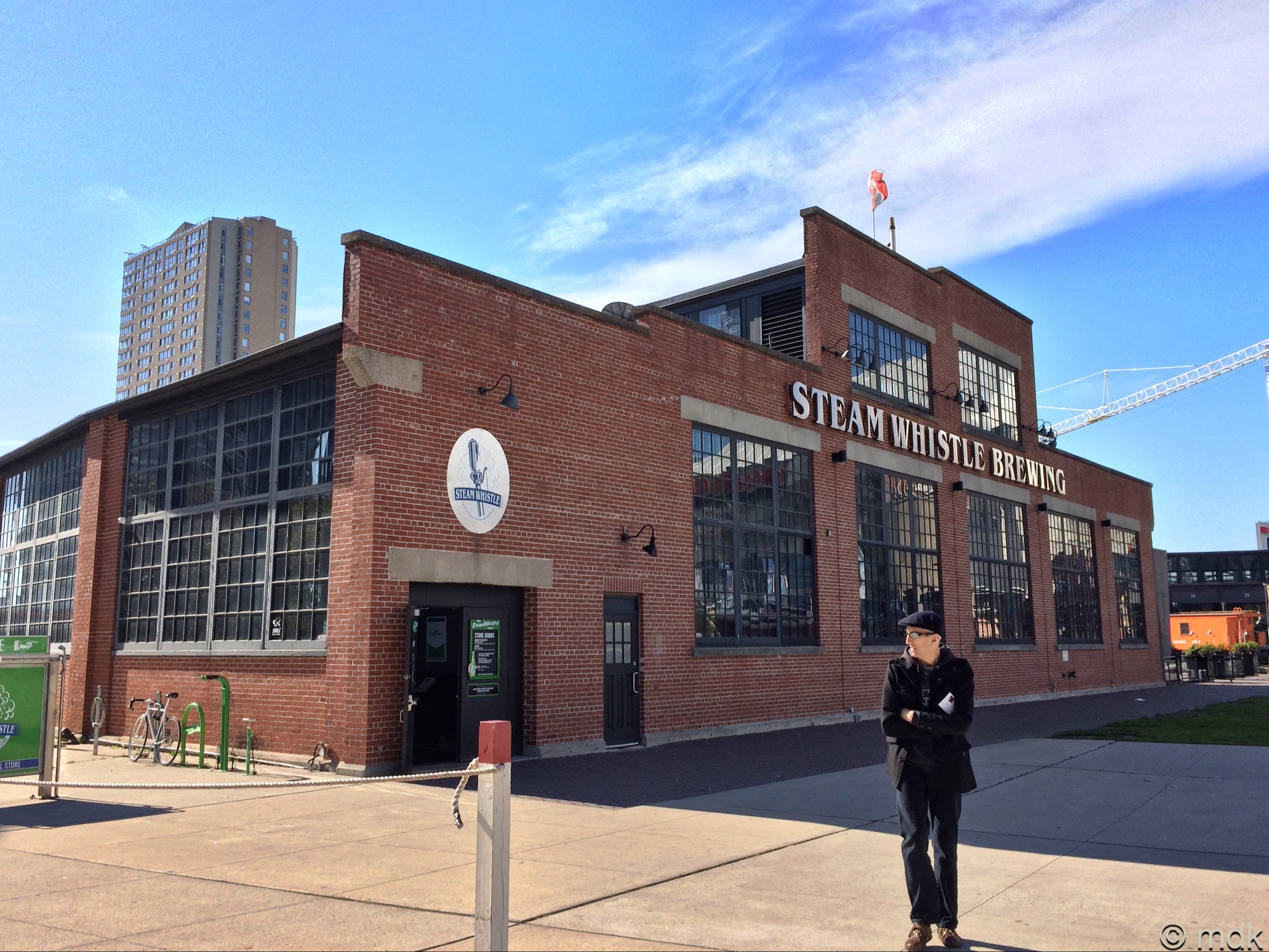 At least there were no problems finding our way. The massive tower dominates the skyline, especially this close, all we had to do was walk towards it. As it happened, we got slightly distracted on the way. Walking across a small park we spotted a lovely quirky sculpture and I just could not resist stopping for a photo or two. The tall black column, standing at a slight angle is filled with holes and the culprits are easy to spot, two massive woodpeckers. This is the work of artists Dai Skuse and Kim Kozzi working together as Fastwürms and it dates from 1997. Given how close it is to the Blue Jays Stadium, perhaps they should have added a blue jay or too as well. It certainly made me smile. 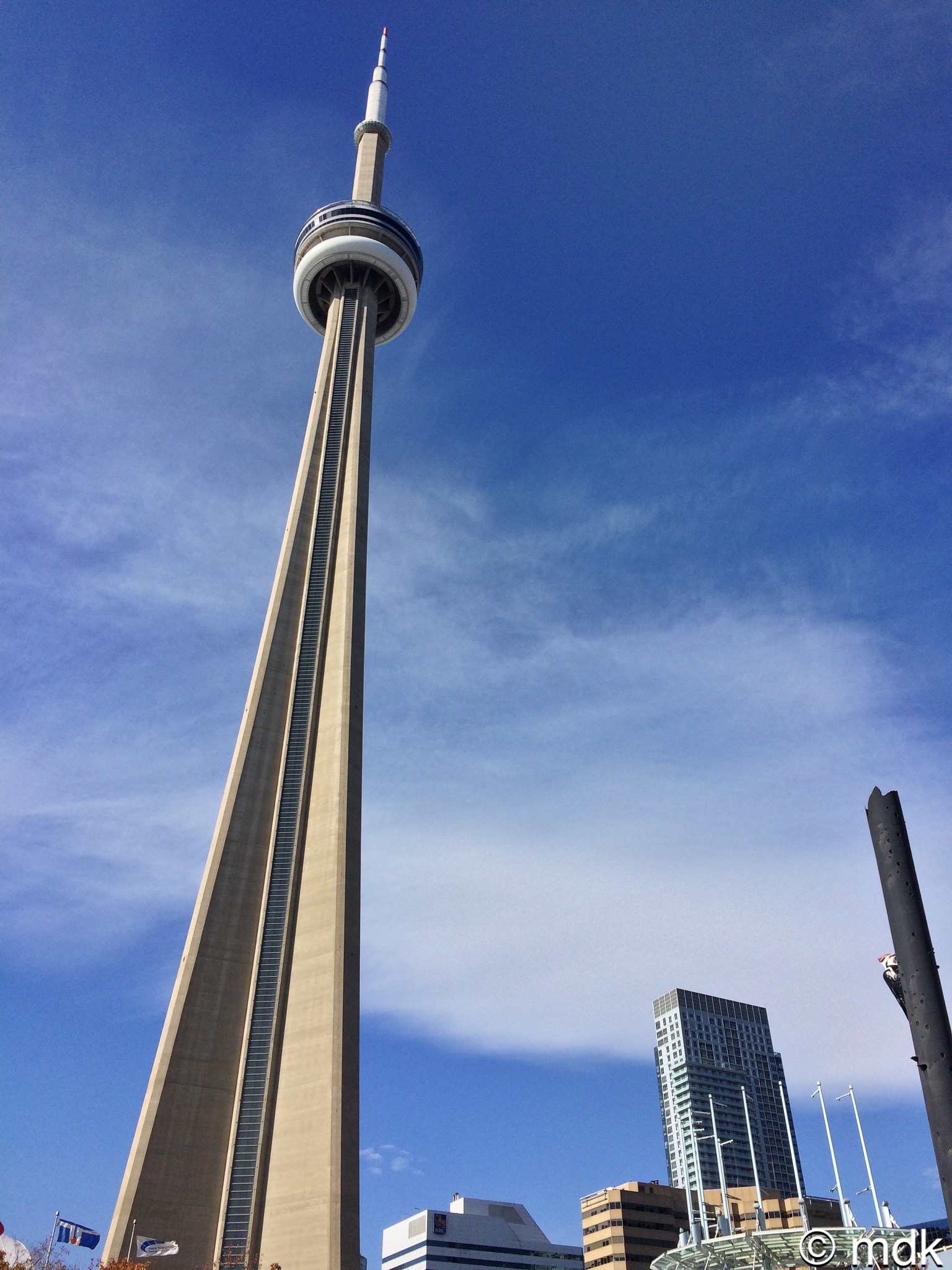 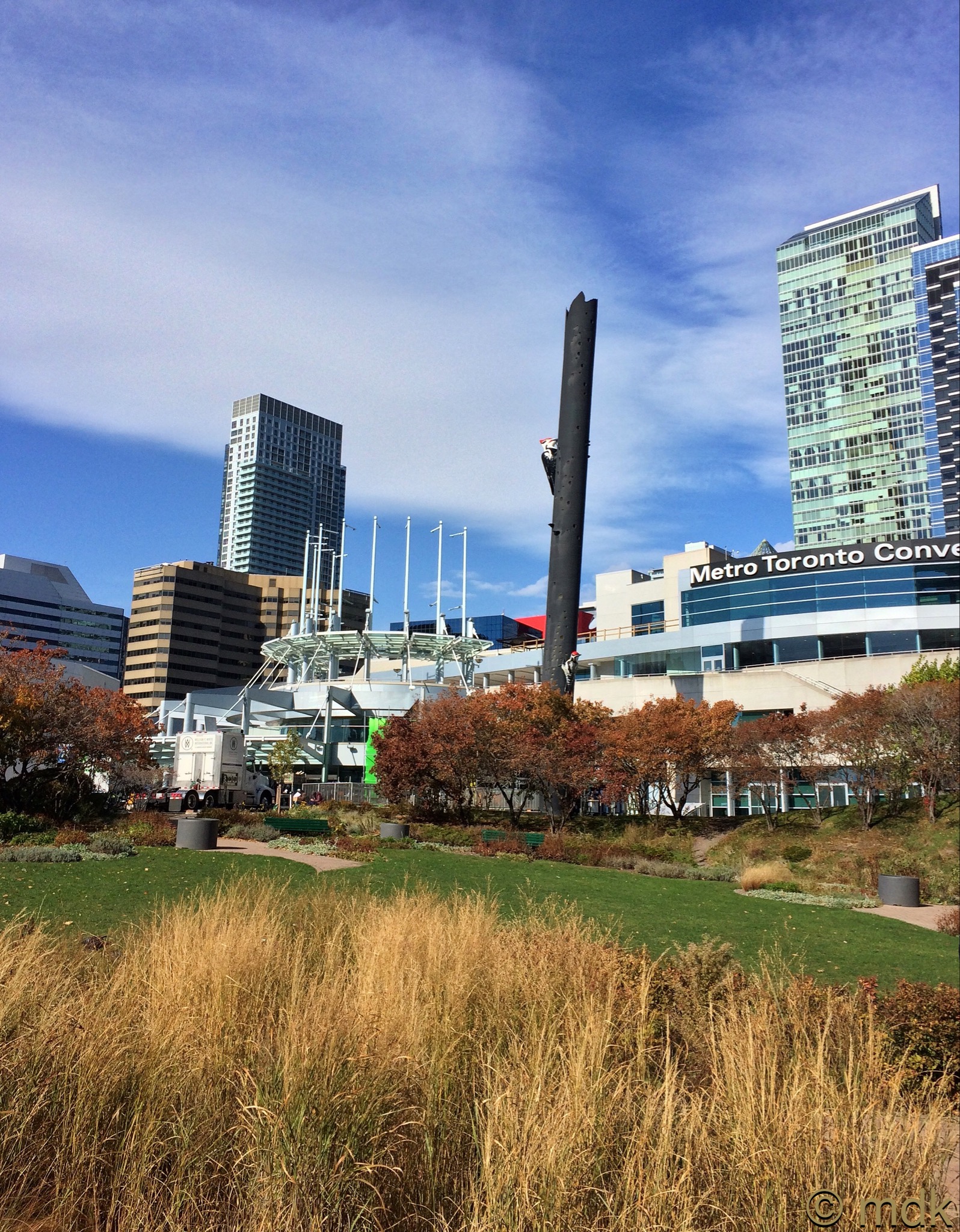 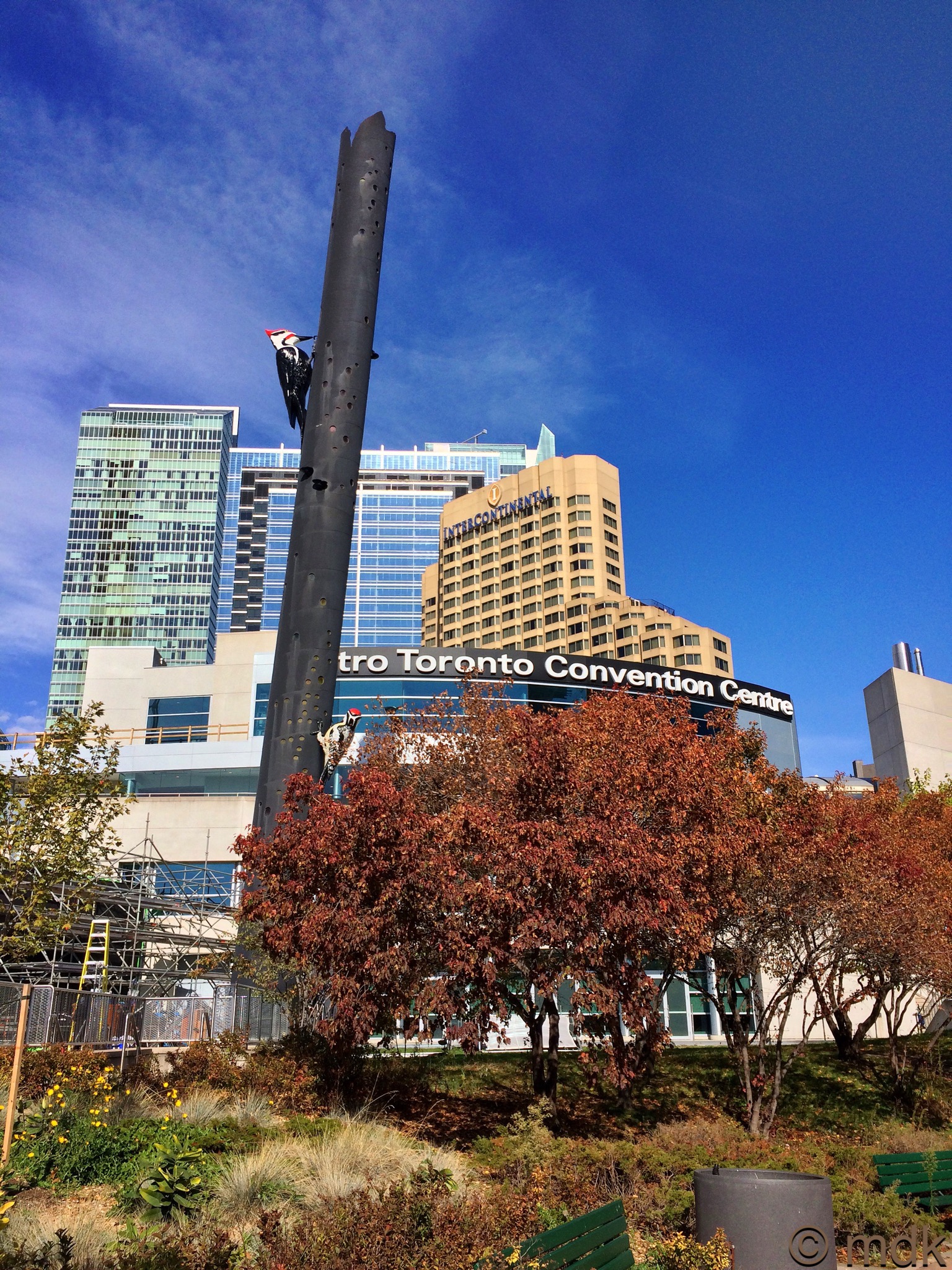