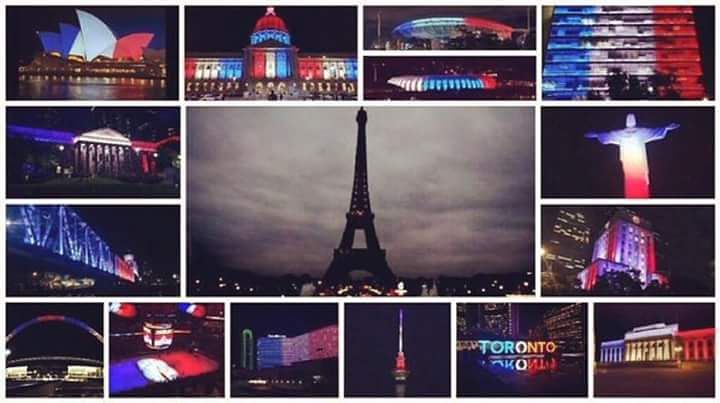 Today I was going to post about Commando’s marathon finish in Toronto. Instead, I’ve been watching events unfold in Paris, a city I love, with horror. It’s unimaginable that the streets I walked not so very long ago were running with blood and echoing with gunfire on Friday night. My heart goes out to the people of France and, while the Eiffel Tower remains in darkness, it’s good to see the rest of the world is alight with support and love.

Friday 13 November 2015 showed the worst side of humanity but it also showed the best. Almost at once Twitter was filled with #PorteOuverte tweets from Parisians offering shelter to those caught up in the horror. Before long #StrandedinUS and #StrandedinCanada sprang up to help Parisians stranded on foreign soil. Pretty soon there was #prierpourParis filled with messages of love and support and this morning I received a Facebook notification, via Safety Check, to let me know my French Friend, Vincent, was safe. Then there’s the #notinmyname campaign where Muslims are showing their support.

For me, the most poignant of all the things I saw was the man who dragged his grand piano through the streets with his bicycle and played Imagine outside the cordoned off Bataclan Theatre. Never have those words seemed more apt. If only…