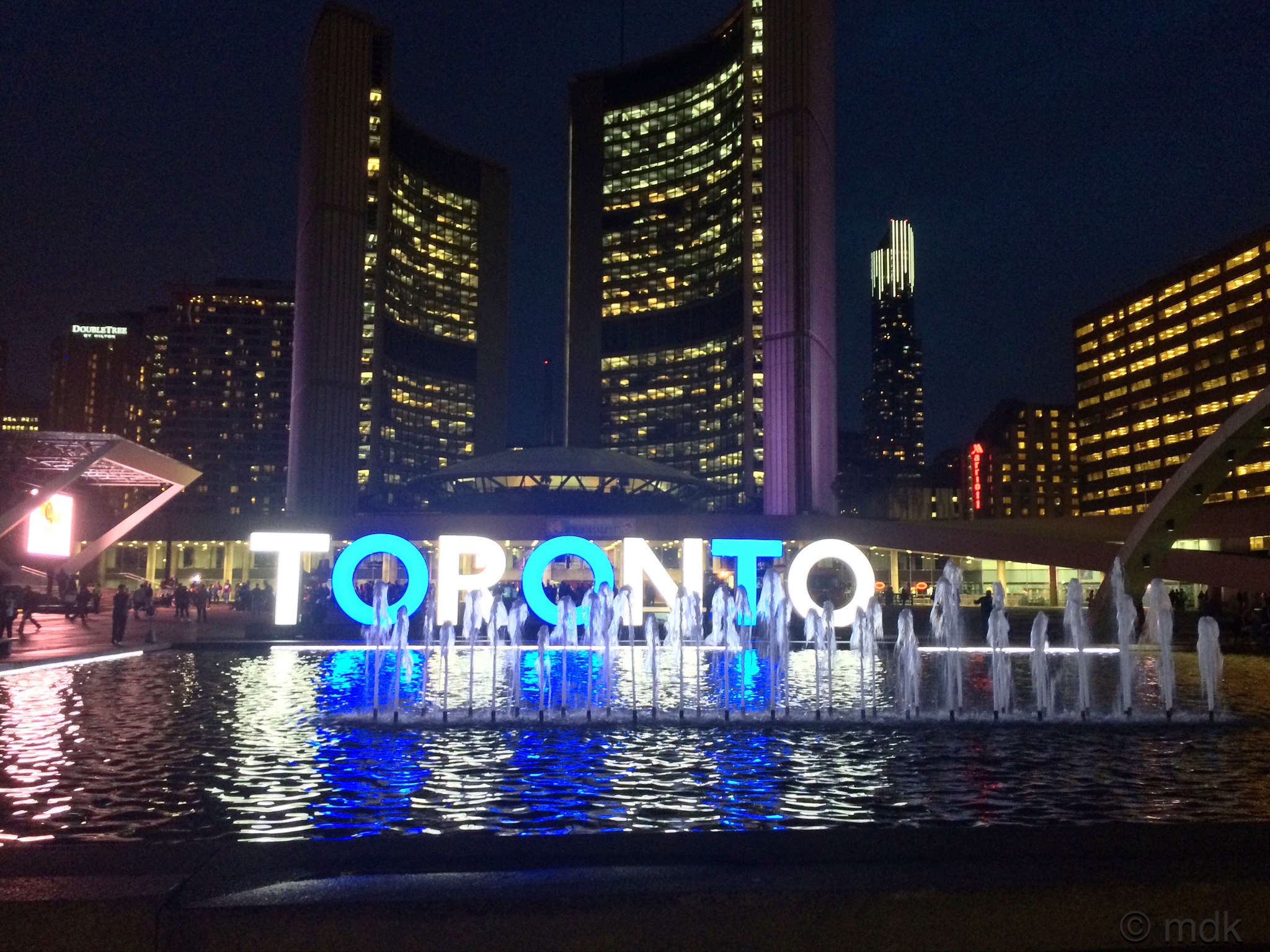 We got back to Toronto just as darkness was falling. It would be our last evening in the city and, once we’d packed as much as we could, we set off out into the night. We’d been either walking or driving more or less all day so we decided to take a short wander to Nathan Phillips Square to see the Toronto sign lit up and grab a snack in the process. When I’d been waiting for Commando to finish the marathon I’d noticed a Hero Burger place in the square. Hopefully it would be open. If not we’d have to think again. 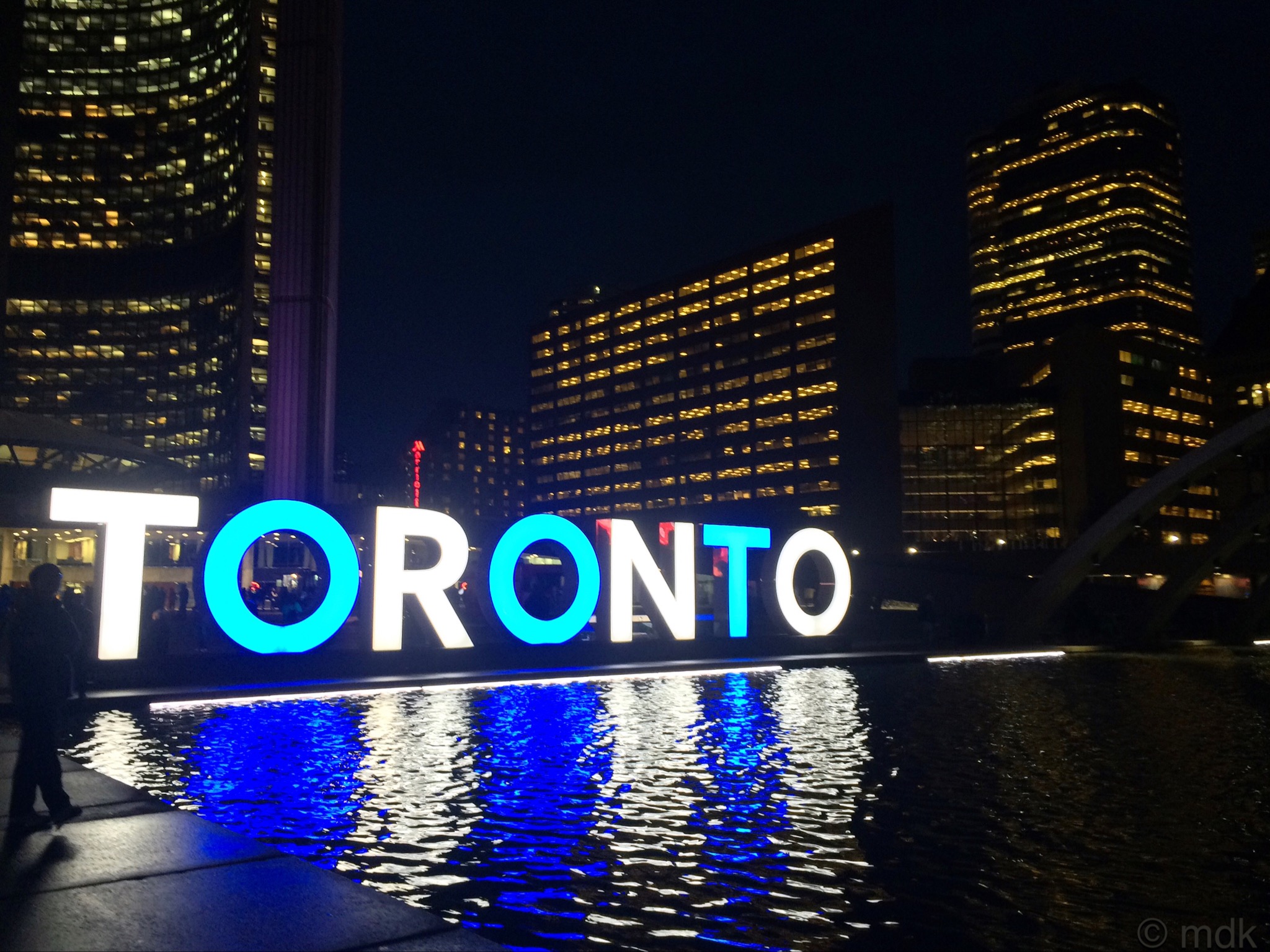 As it happened, it was open and there wasn’t even a queue. The Hero Burger chain began in Ontario in 2004 so you could say this would be a local delicacy. They also only use food from sustainable sources with no nasty additives and even the packaging uses recycled paper so it may have been fast food but it was good and healthy as well as delicious. While we waited for our burgers the reason for the lack of queue became obvious. There was a huge screen in the square and people were crowded round watching the latest Blue Jays game. This was the fourth game in the series, so far they’d lost two but the day before had  pulled a convincing victory out of the bag. The game was comming to a close and, although we had no real idea what was going on we could see it didn’t look good. 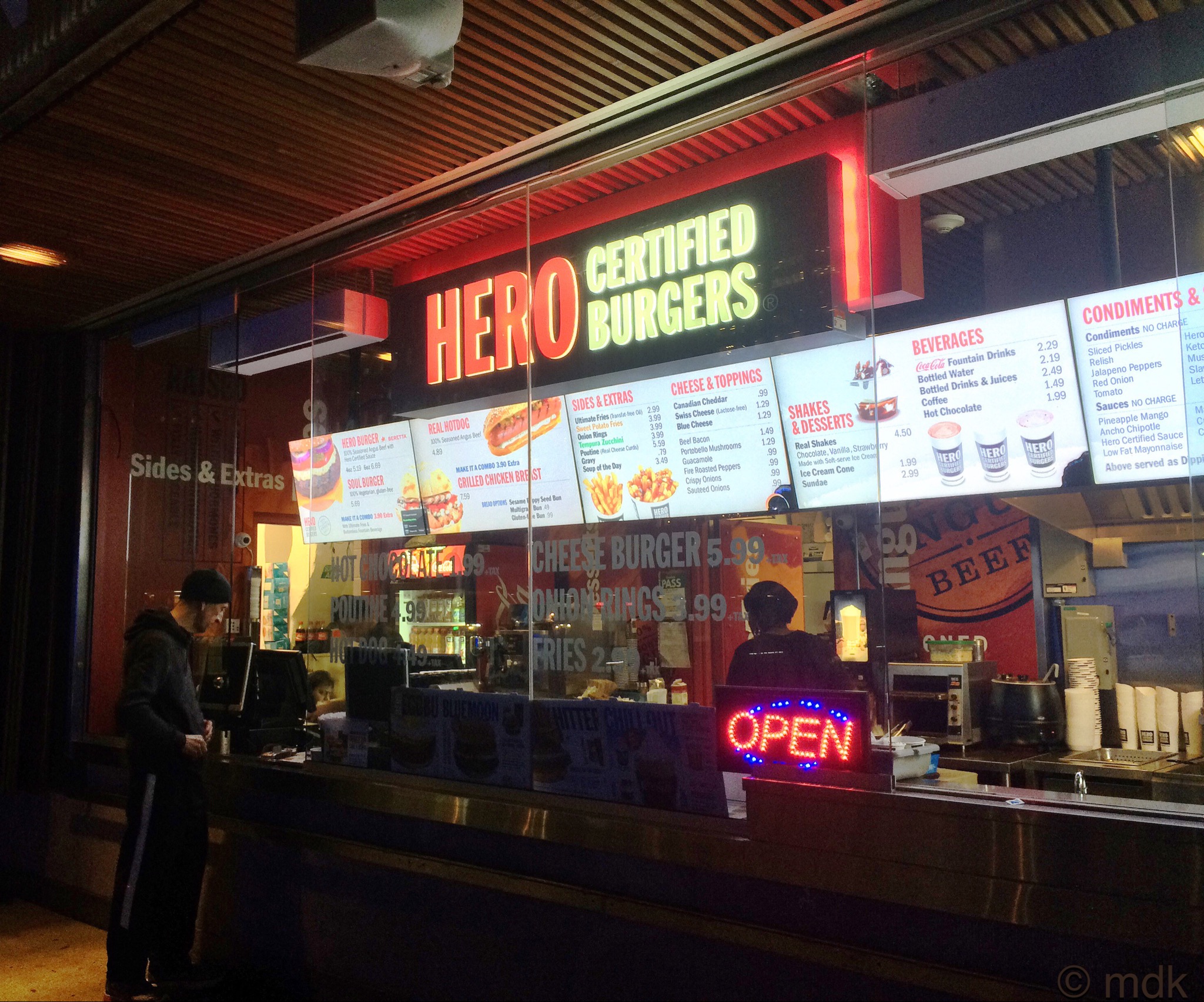 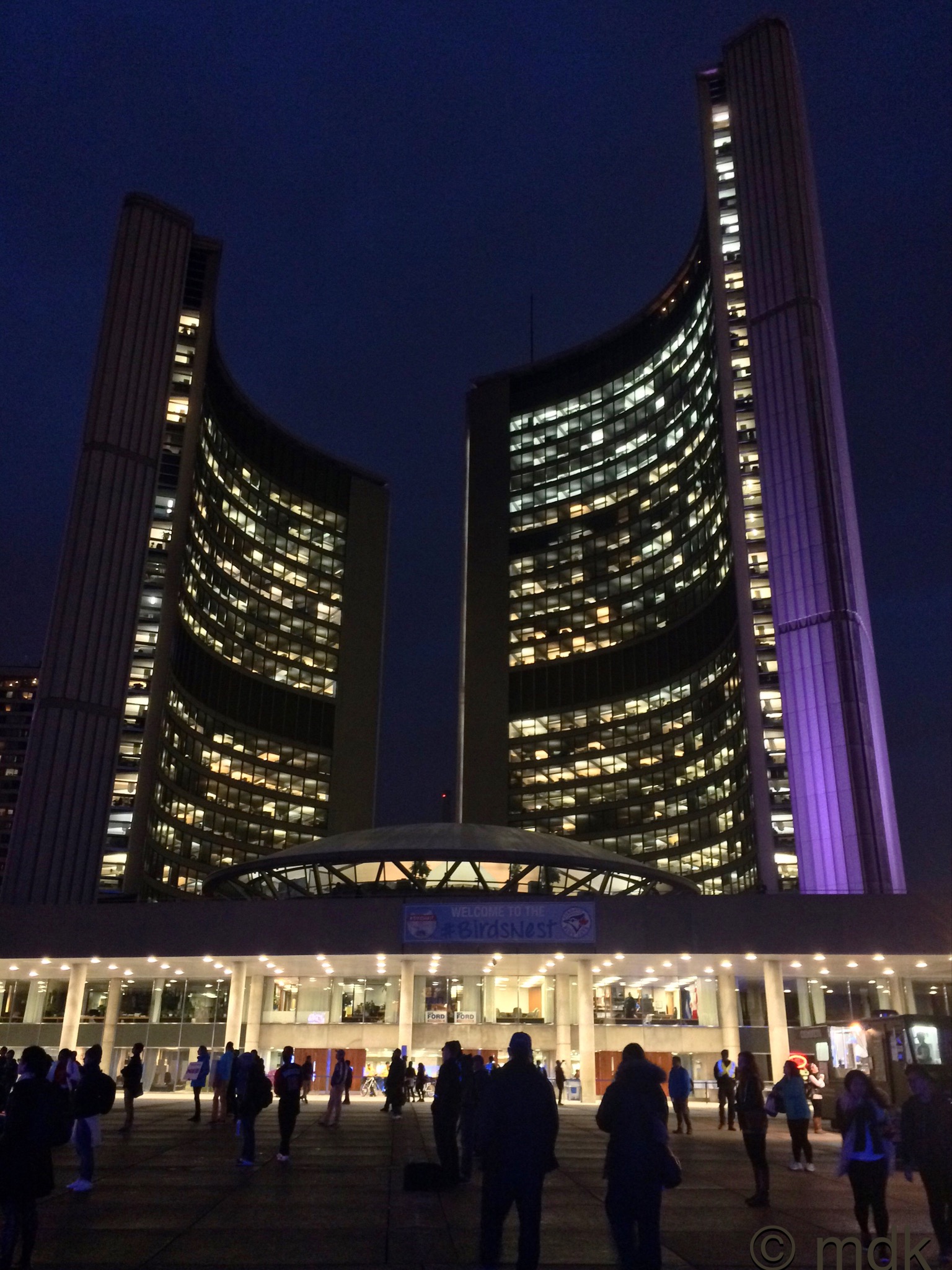 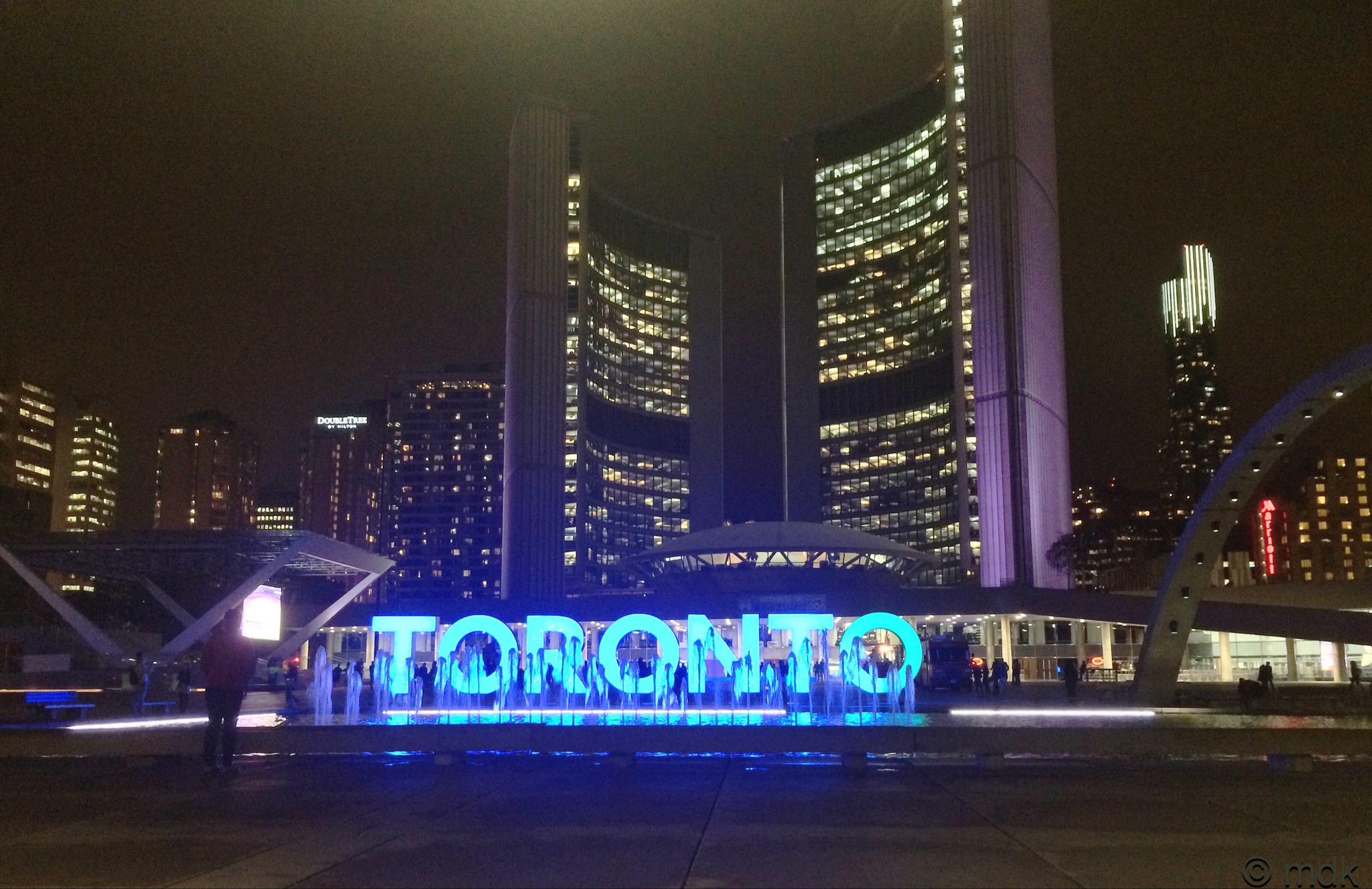 As we ate our burgers on a bench in front of the Toronto sign watching it slowly change colour the Jays lost, giving them an almost impossible task in the next game. Interestingly, the crowd seemed philosophical about it. There was no booing or stomping off in anger, just a slightly downhearted looking group slowly wandering off into the night. With the game over and our burgers finished we strolled towards the old City Hall. There we stood for a moment or two admiring the twinkling lights on the tall buildings and their reflections in other tall buildings. 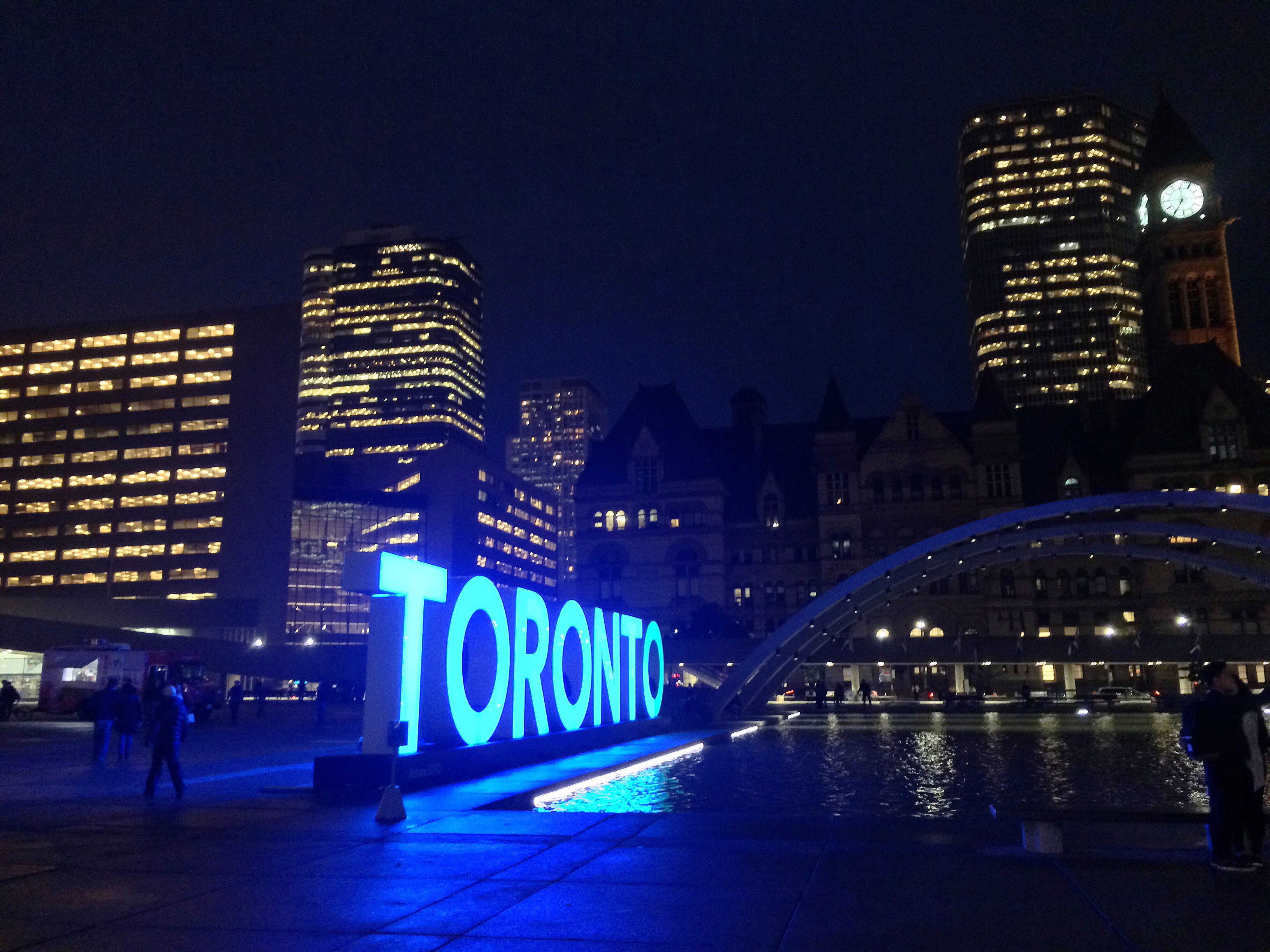 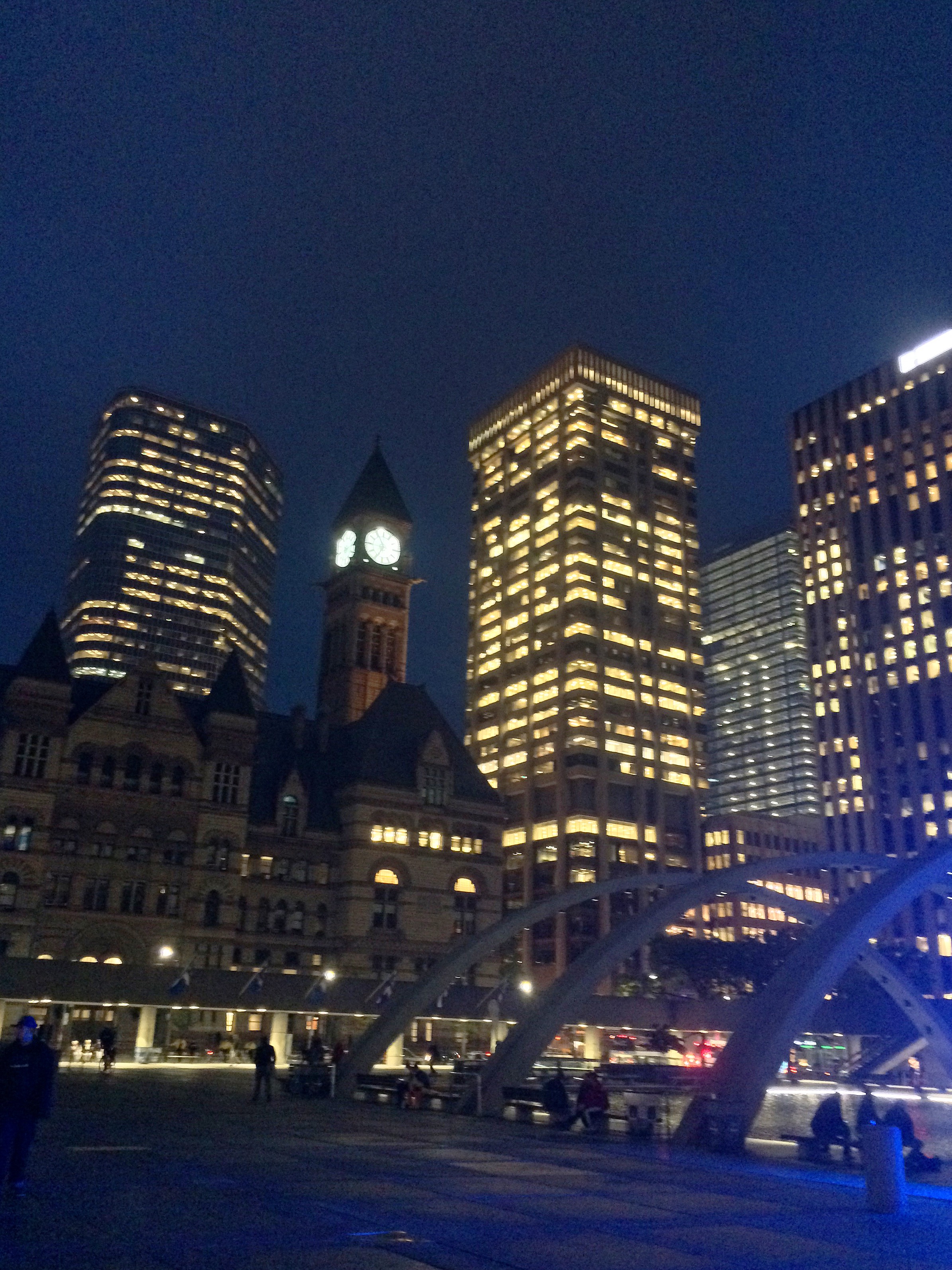 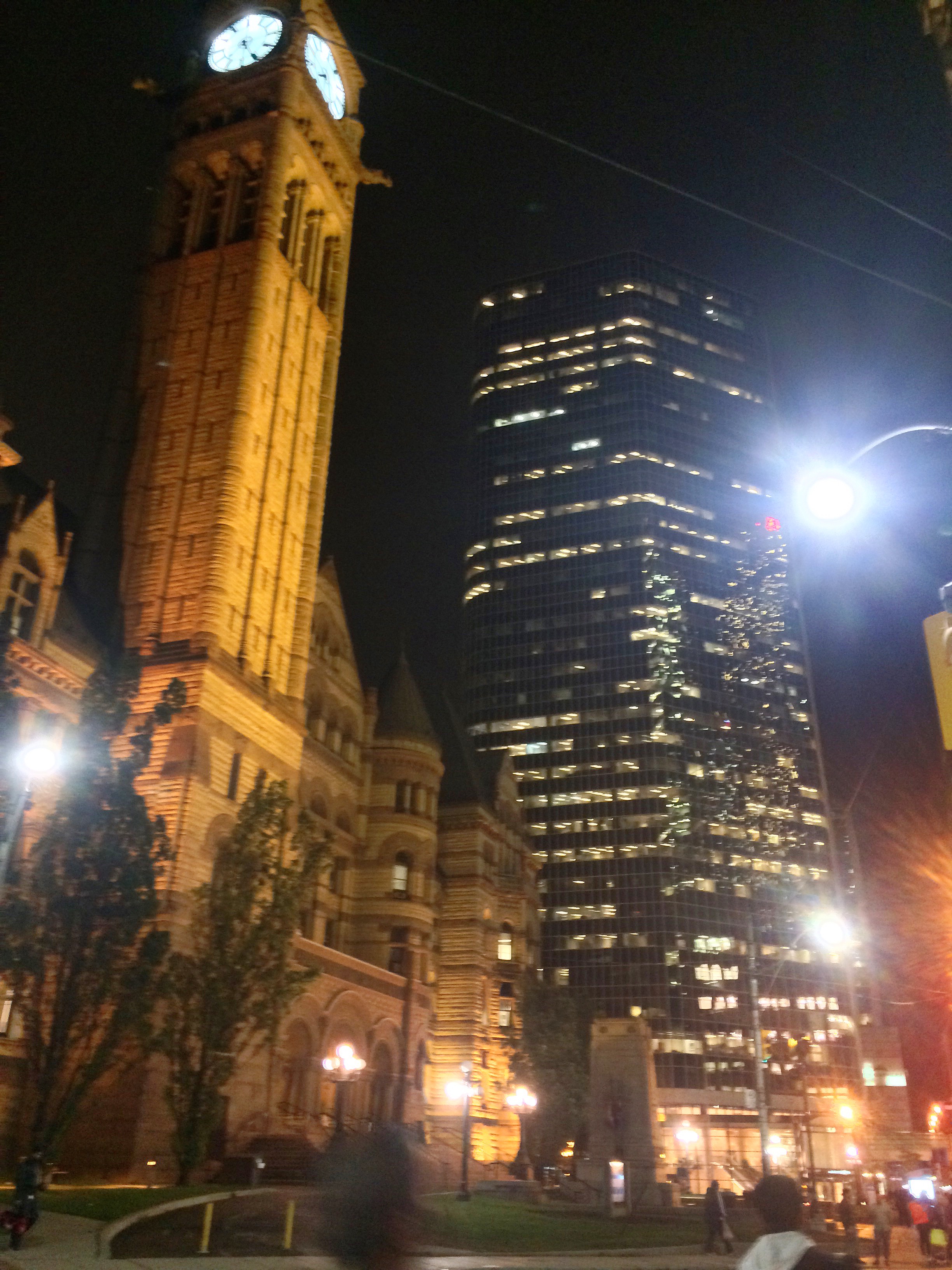 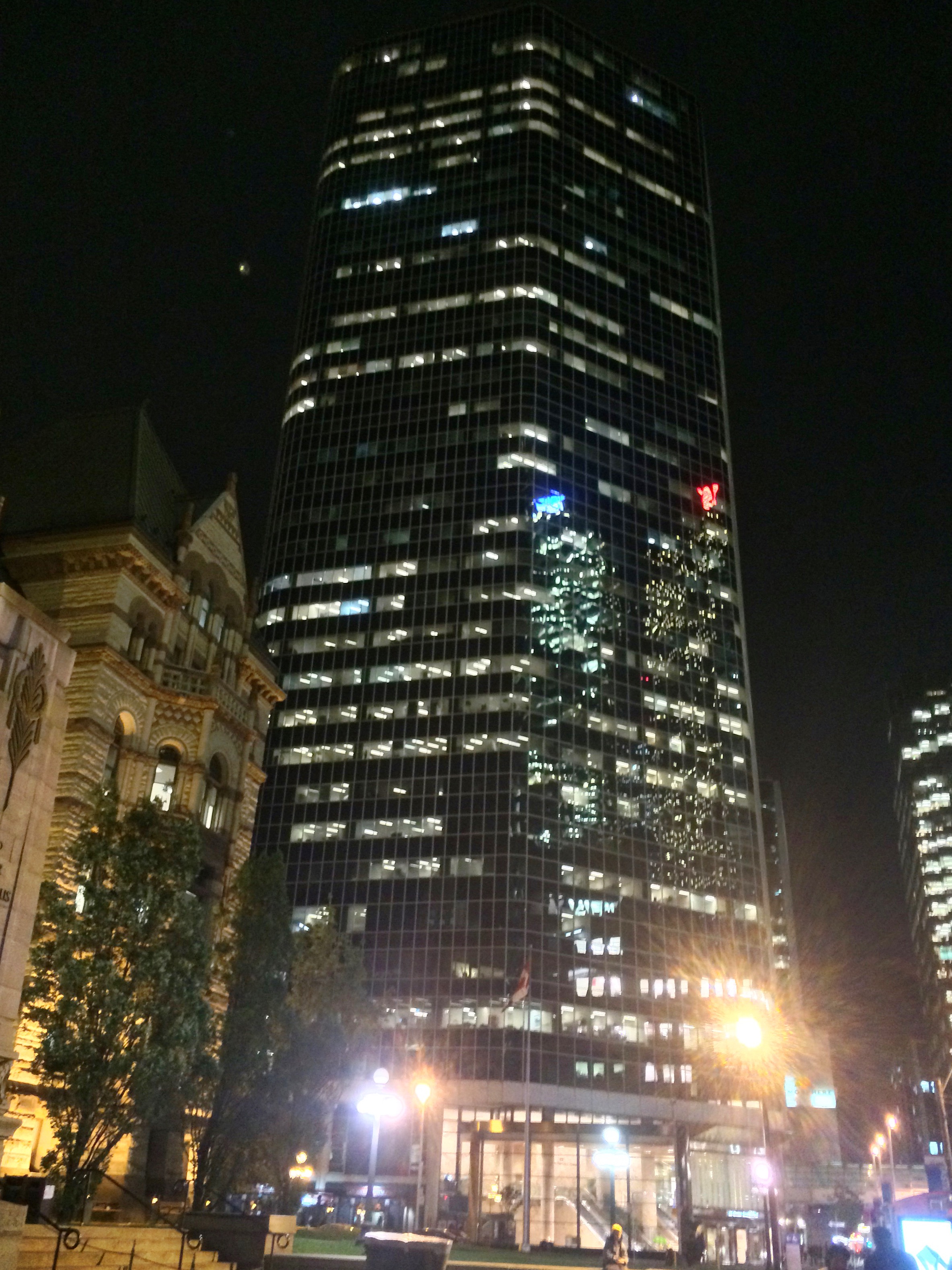 It’d been a long day and we were both tired. We talked about going for a drink somewhere but decided against it and, instead, slowly ambled back through the square. The evening felt tinged with sadness. Our adventure was coming to an end and tomorrow we’d have to drive back to Muskoka one last time to take the car back. Toronto is a city with a great deal to offer and it felt as if we’d only scratched the surface.
“I wish we had a few more days,” I said wistfully.
“Me too,” Commando agreed. 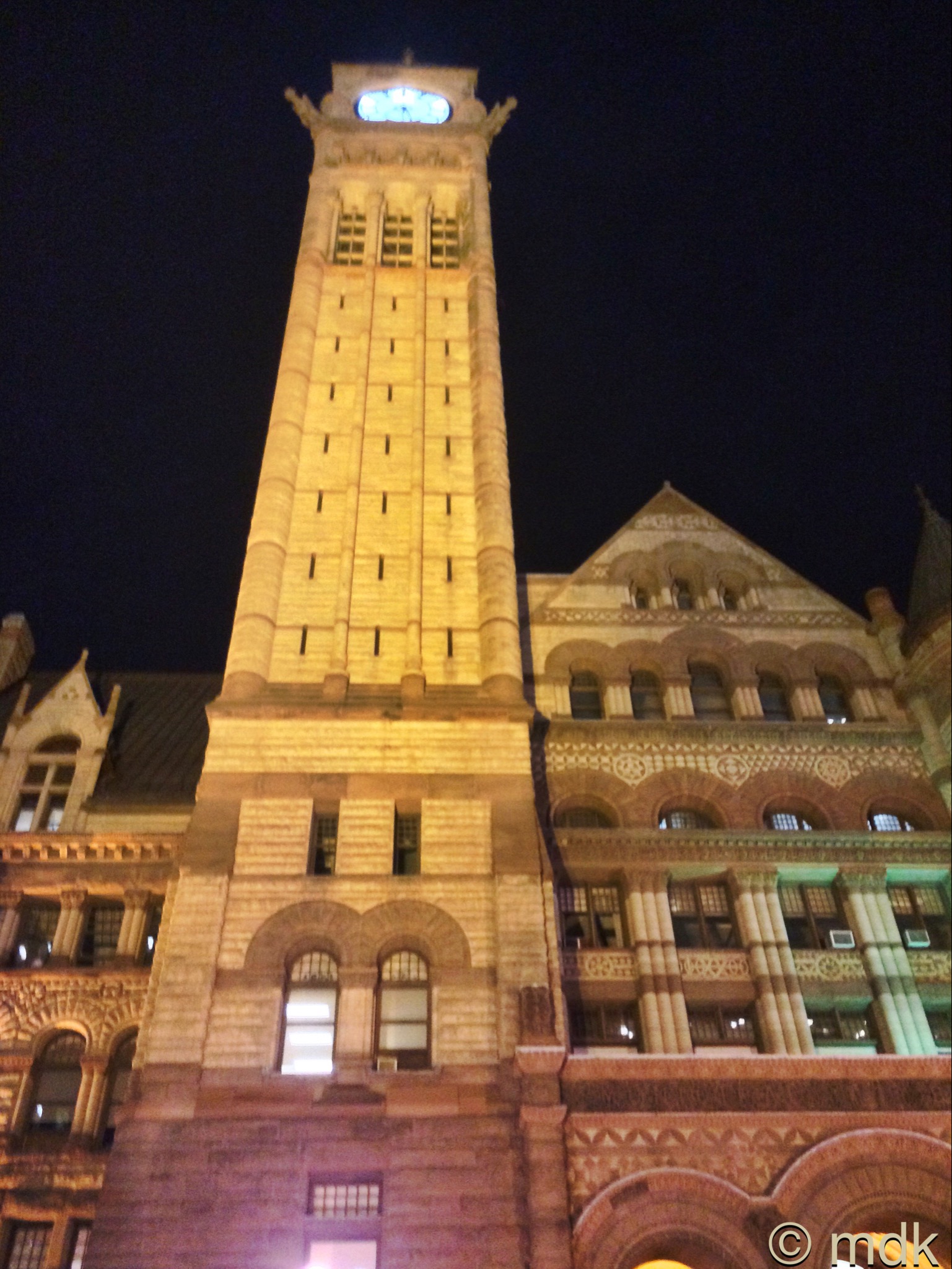 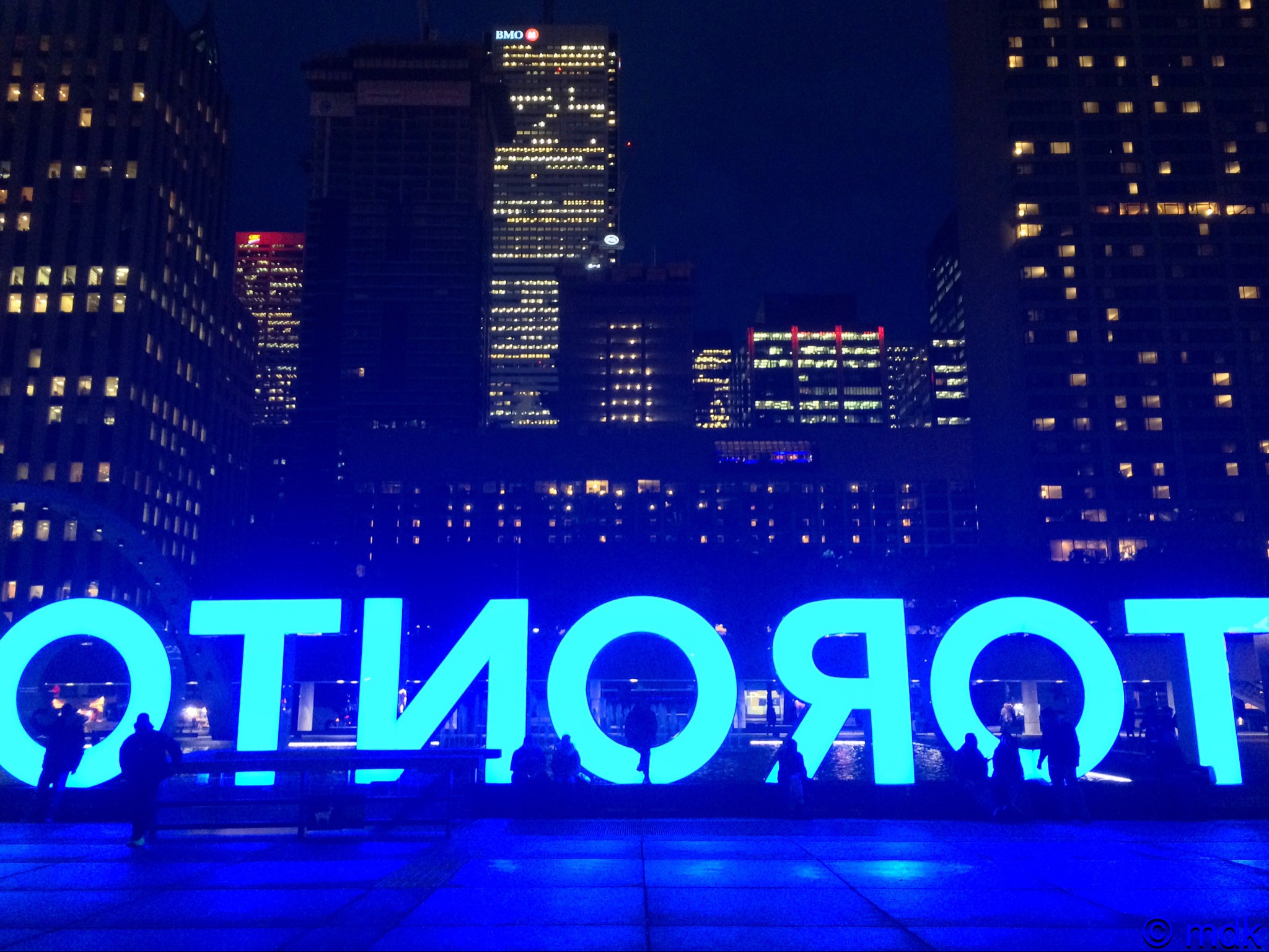 The next morning, while Commando packed up the last bits and pieces and rested in readiness for the long drive to Muskoka, I went for one last walk. There wasn’t a lot of time and the weather wasn’t the best but there was one last building I wanted to see before I left. The Gooderham Building, dating from 1892, and built by architect David Roberts, Jr. for William Gooderham of Distillery District fame, is a landmark in the city of Toronto. It stands in the St Lawrence district on the triangular island of land between Front Street and Wellington Street. The shape of the plot dictated the shape of the building and it is known as the Flatiron building for obvious reasons. 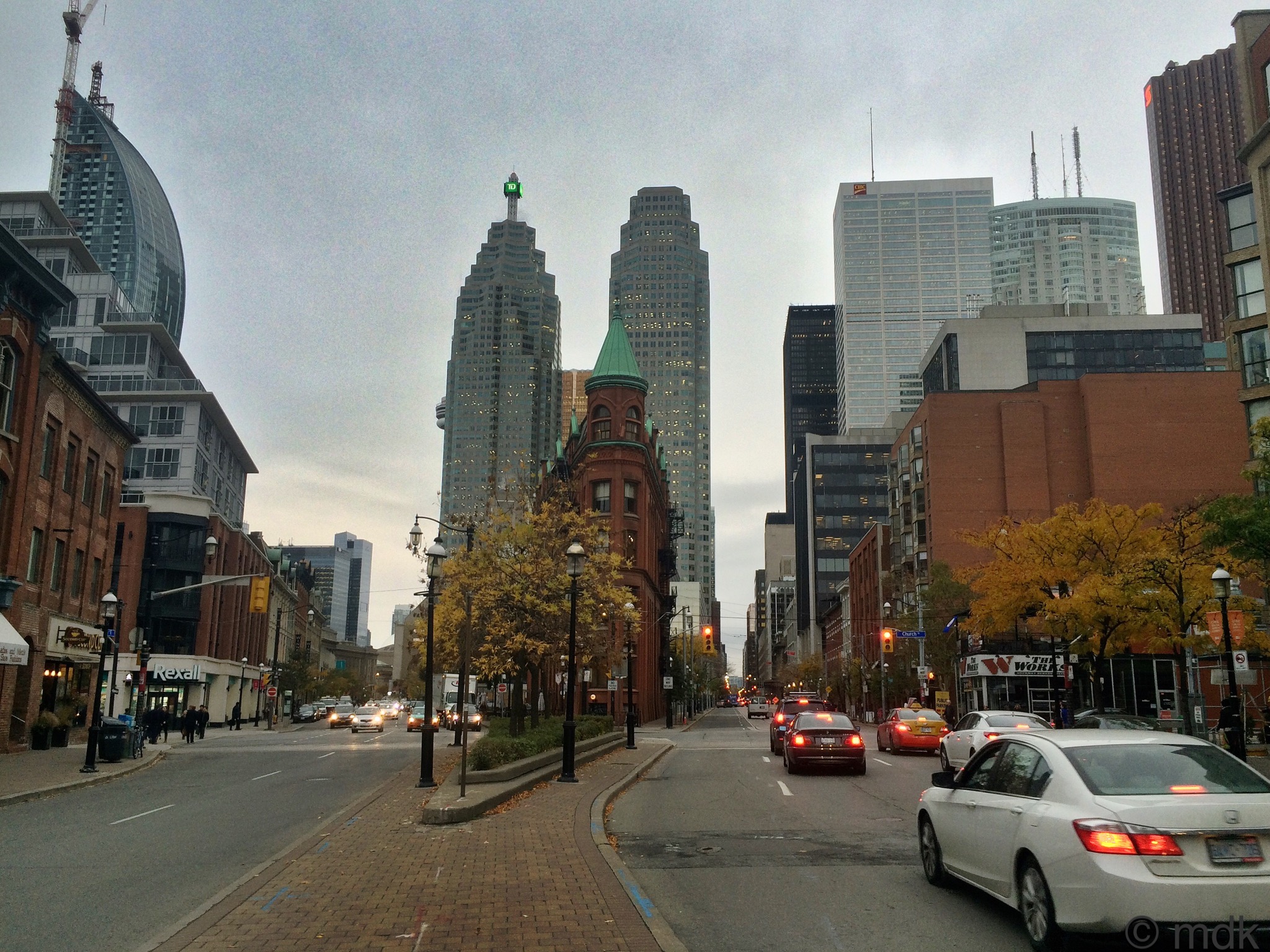 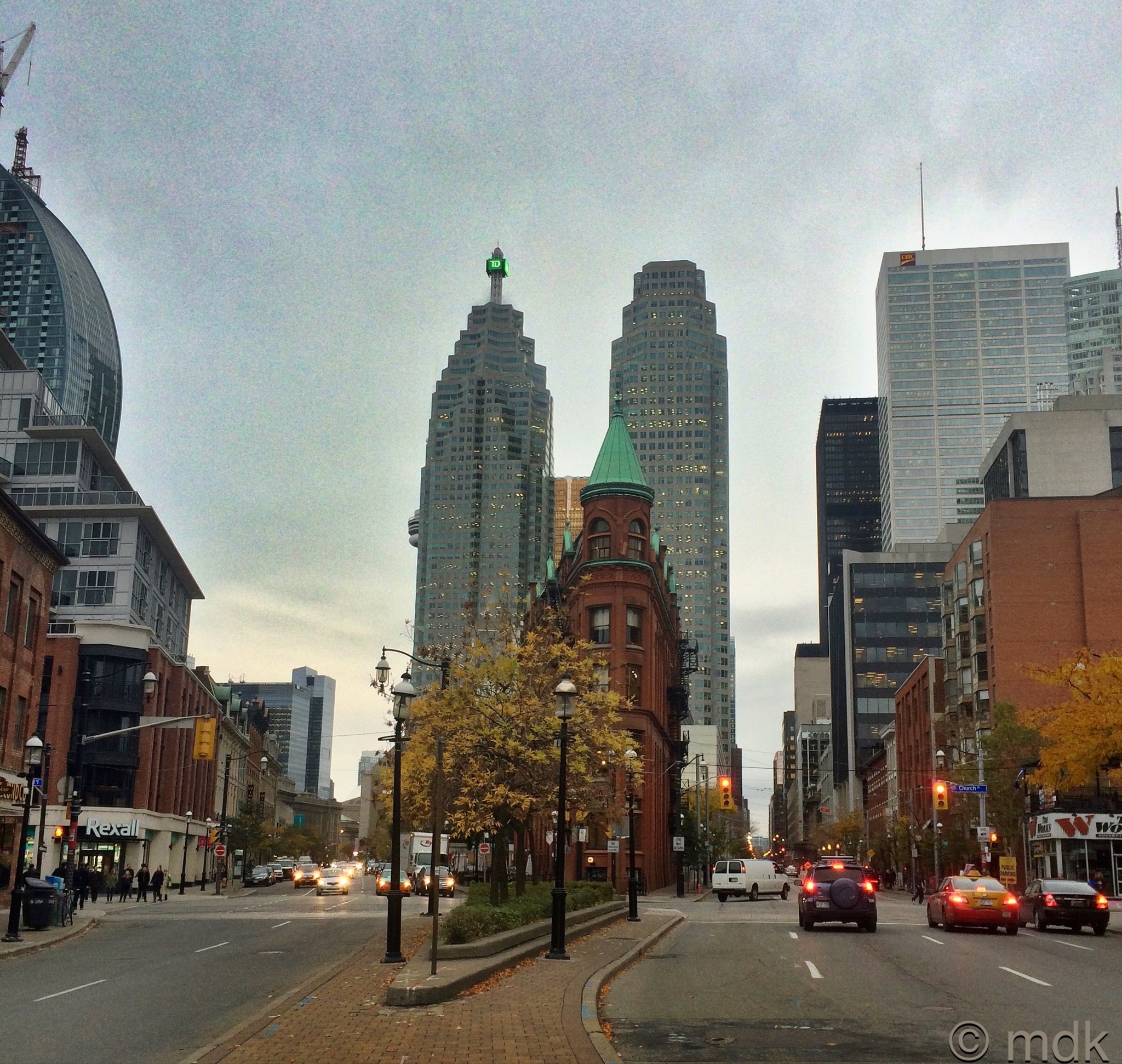 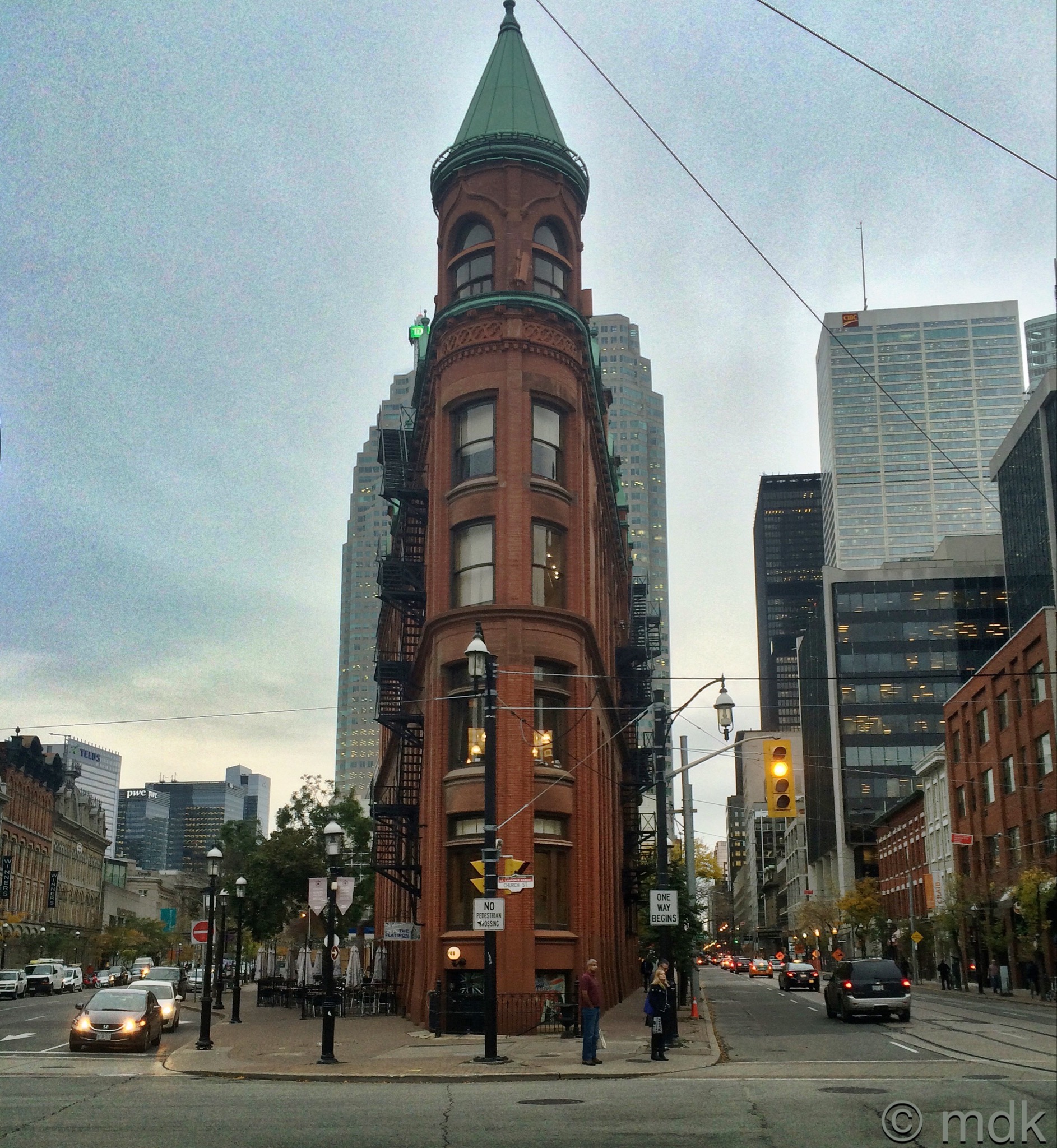 The building replaced a similarly shaped, three story building called the Coffin Block, built in 1845 and far less attractive. This is a truly beautiful red brick edifice with a rounded front end, a Romanesque cornice and a frieze above the fourth floor windows. I particularly liked the conical copper roof echoed in the gabled dormers of the upper story. There are Flatiron buildings in many citys from London, to Washington and New York and each has its own charm but the Gooderham Building has a little something else that the others lack. 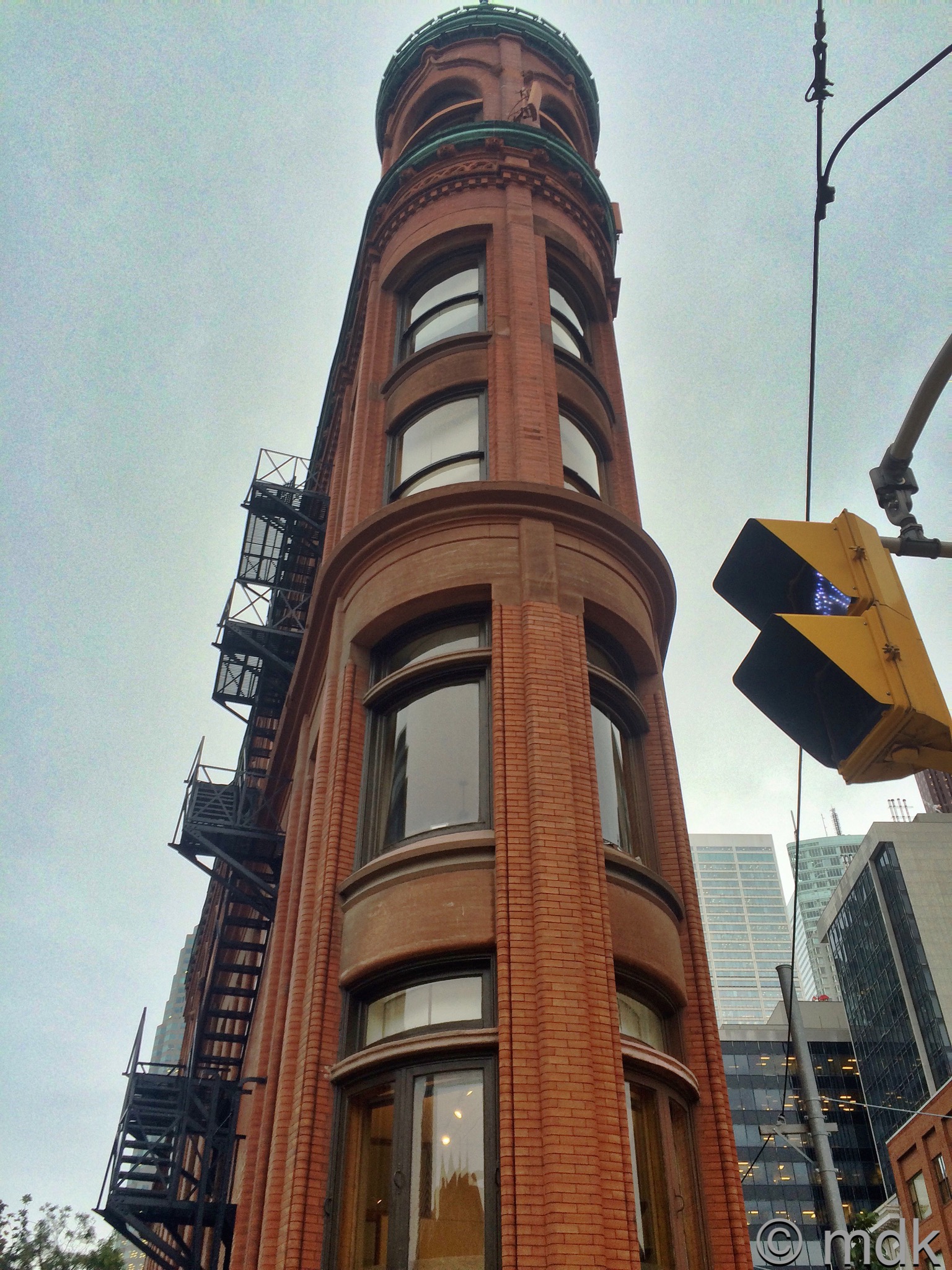 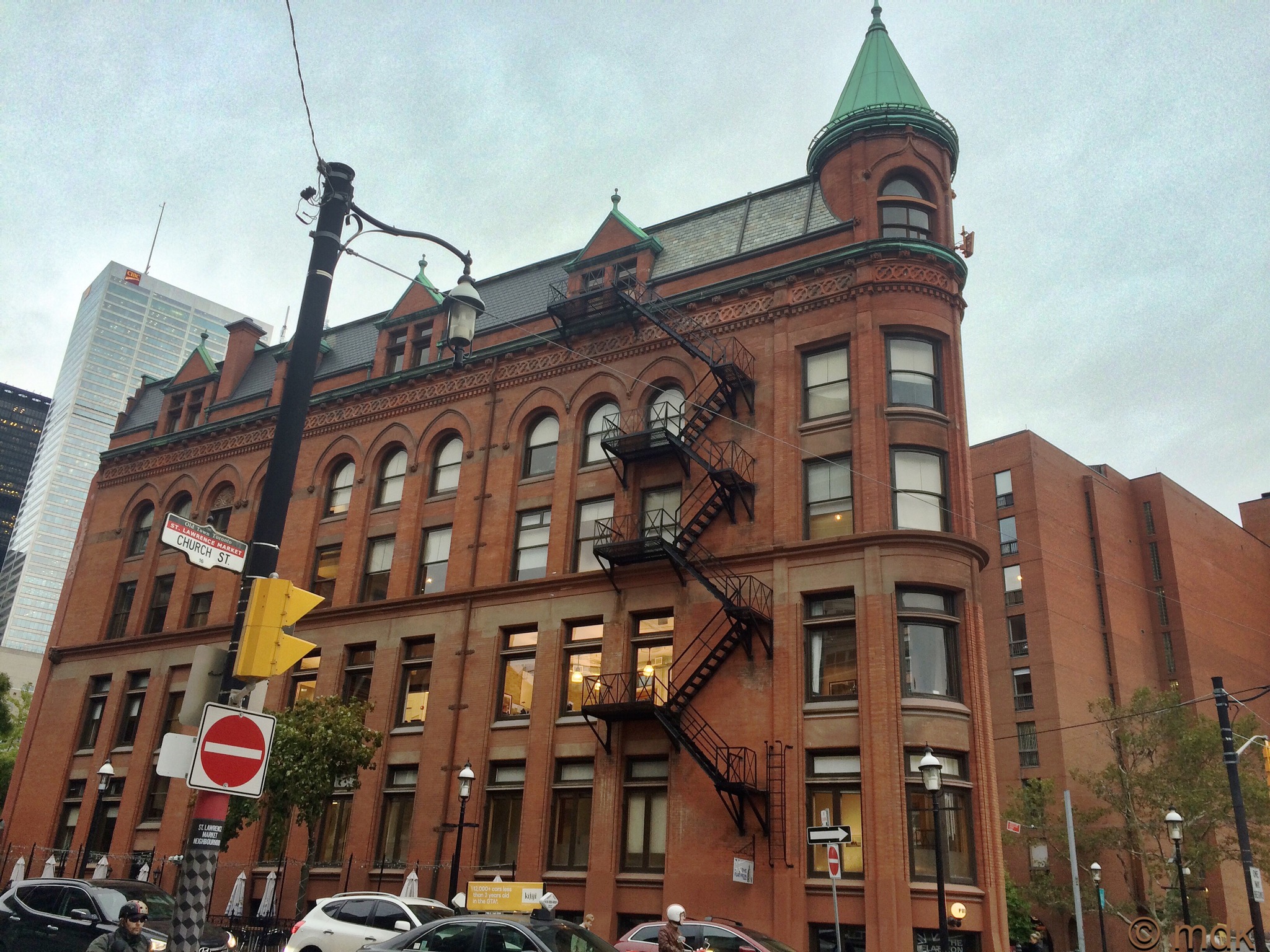 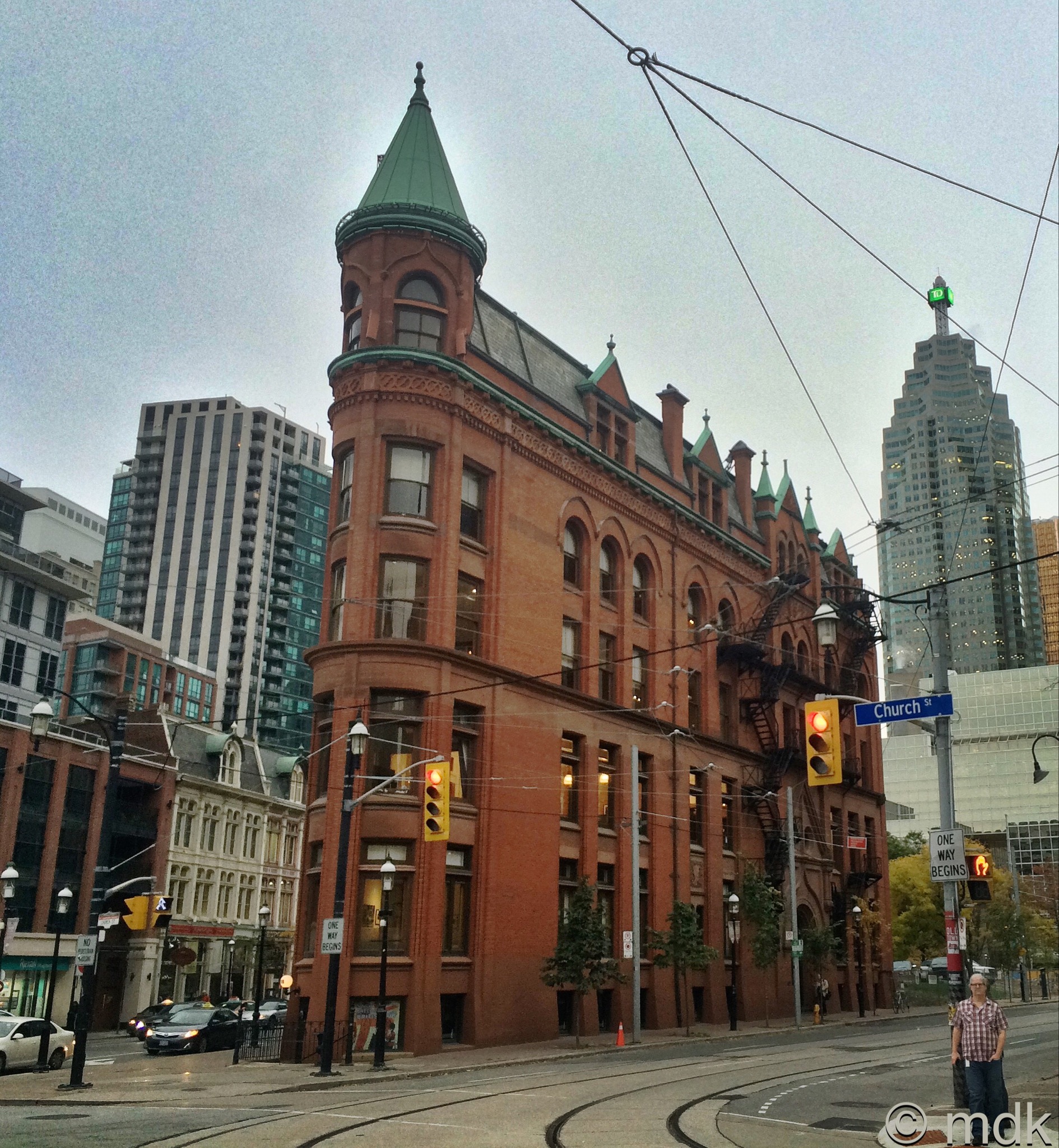 Walking past the decorative arched doorway of the main entrance on Wellington Street, I was heading towards the thing I’d really come to see. The wide rear of the building sports a rather exceptional mural, painted by Canadian artist, Derek Michael Besant. The design is a trompe l’oeil representation of the windows of the Perkins Building across the street. It appears as if a canvas has been nailed onto the wall with its edges flapping in the breeze. It was beautifully executed and well worth the walk. 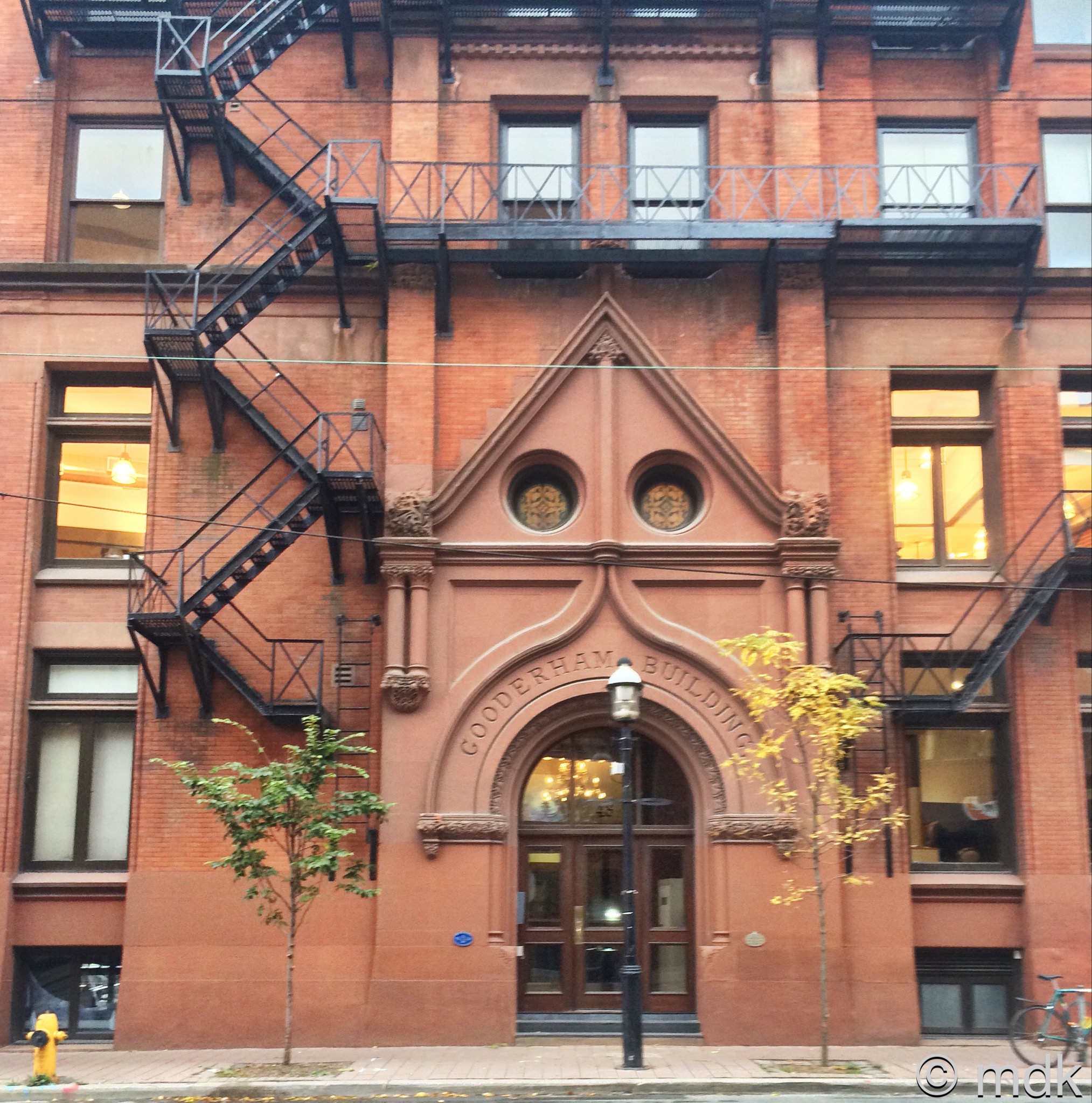 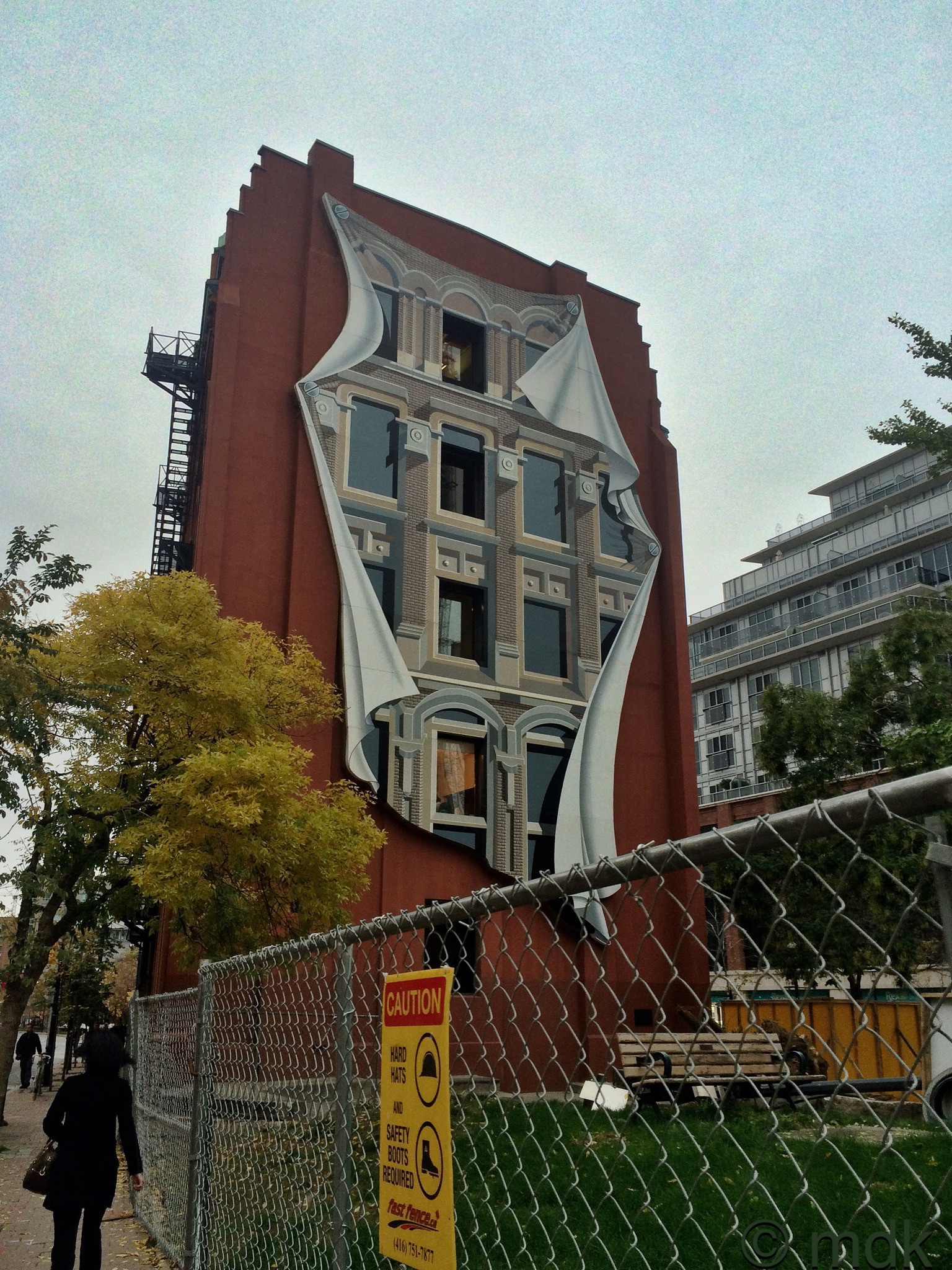 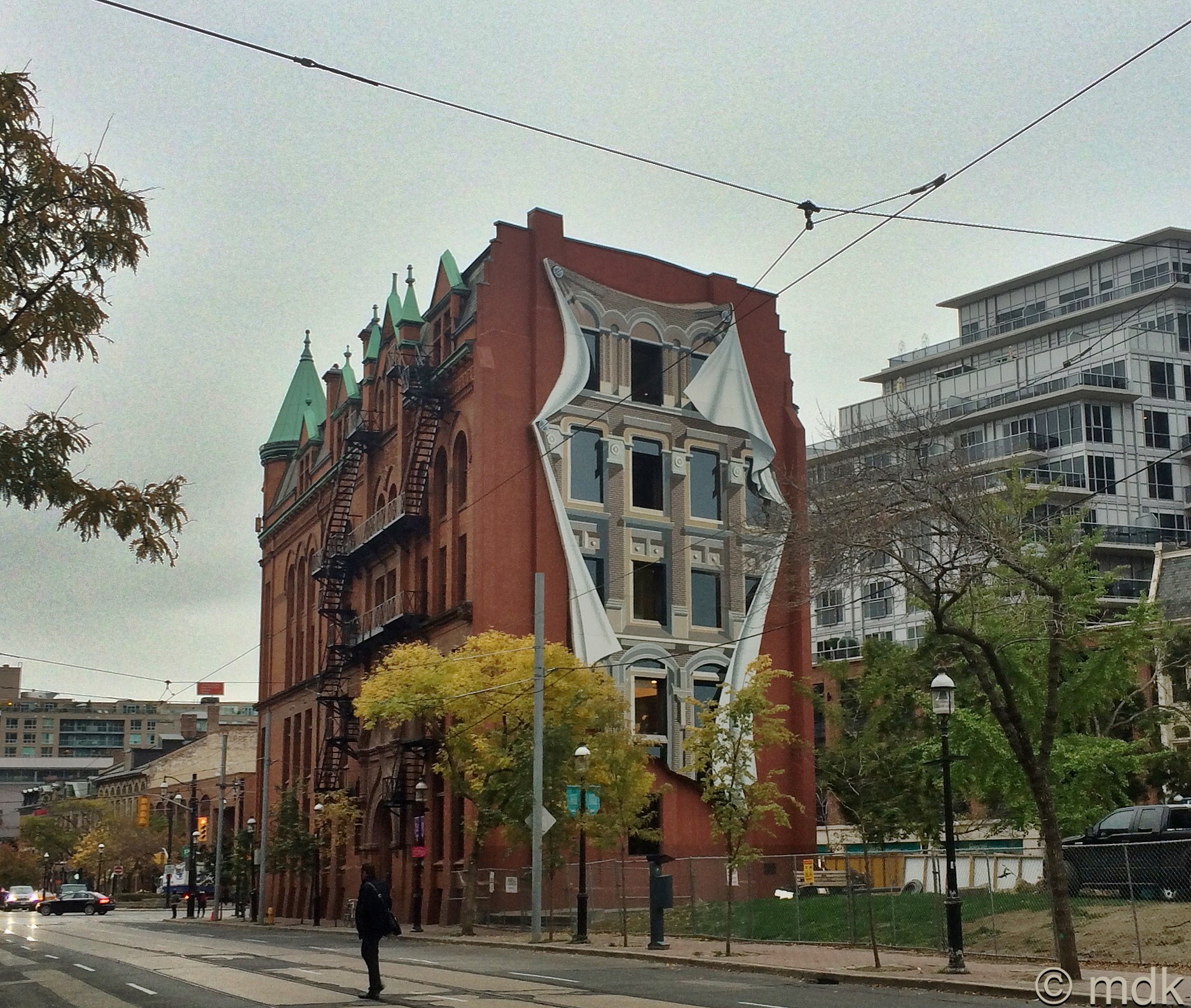 My research told me there was a small park conveniently located at the back of the building with trees and benches. It looked like the ideal spot to sit for a moment and contemplate the lovely mural. Sadly, when I got there it was closed. Apparently work began on renovations in September and the park will stay closed until the summer of 2016. It sounds like it’s going to be interesting, with a play area, benches and a two tired fountain with twenty seven cast iron dogs, one cat and a bone. That, I’d like to have seen. If only I’d had the time to wait! As it was I turned back towards the hotel. My last walk in Toronto was over. 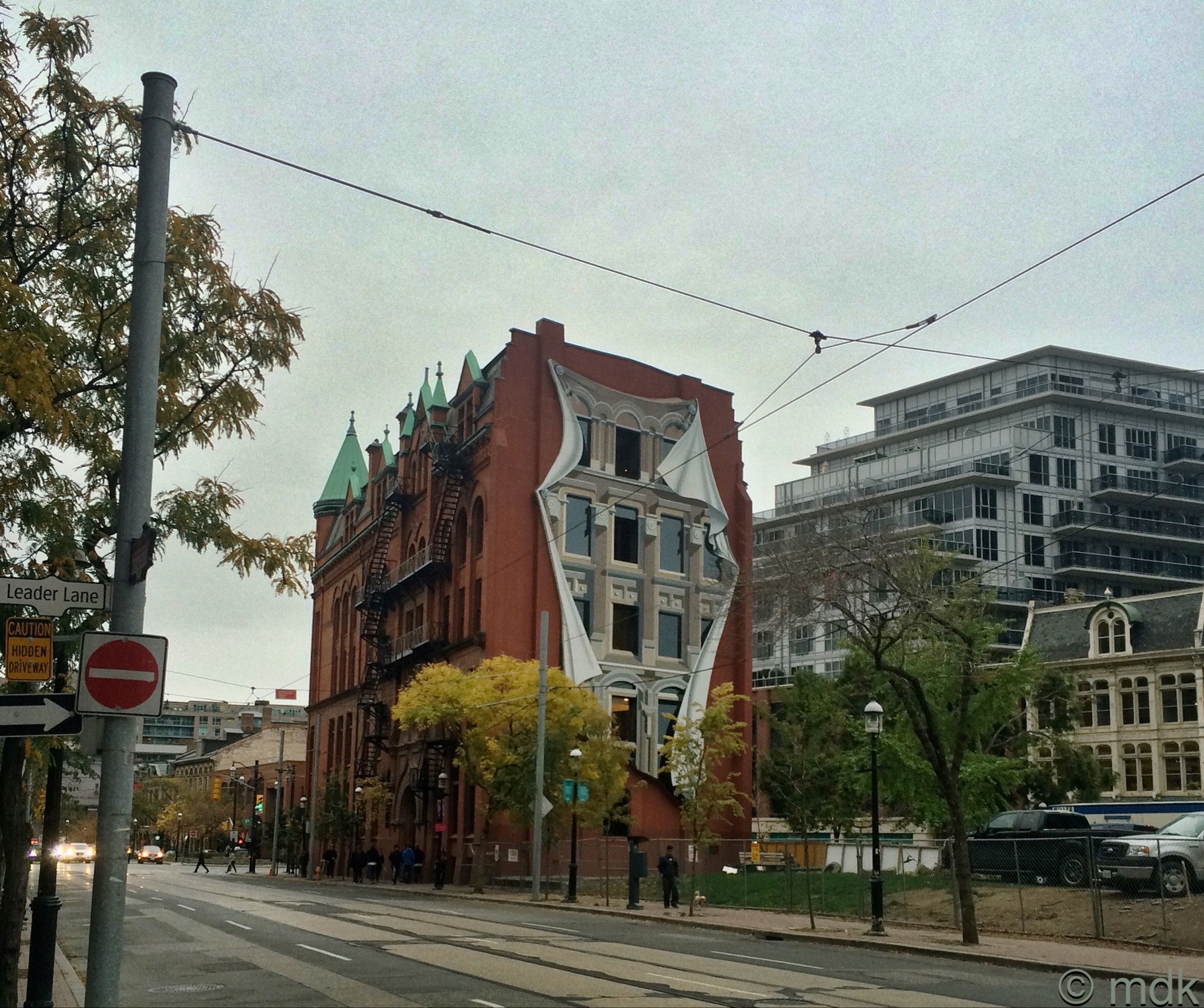 We waited until after rush hour but, yet again, it took us a while to get out of Toronto and, by the time we arrived in Gravenhurst it was lunchtime. The third and final cousin, Sarah, was at Maggie and Alan’s with the twins we hadn’t seen since they were just a bump. We chatted about our adventures and their adventures since we’d last seen them. Marina came up trumps with an impromptu lunch of cheeses, breads, homemade pickles and salad and Alan showed us some of his wonderful photos of Muskoka. The only downside was that Katie was too ill to join us and we didn’t see her at all. Well, that and the fact we had to leave and knew we wouldn’t be coming back, at least not for a long time.

In the late afternoon Alan drove us to the airport. It was a wrench to leave and the beautiful autumn scenery we passed didn’t make it any easier.
“If we’d come out here twenty years ago I think we’d have stayed forever,” I said as we walked into the airport.
“No doubt about it,” Commando agreed.