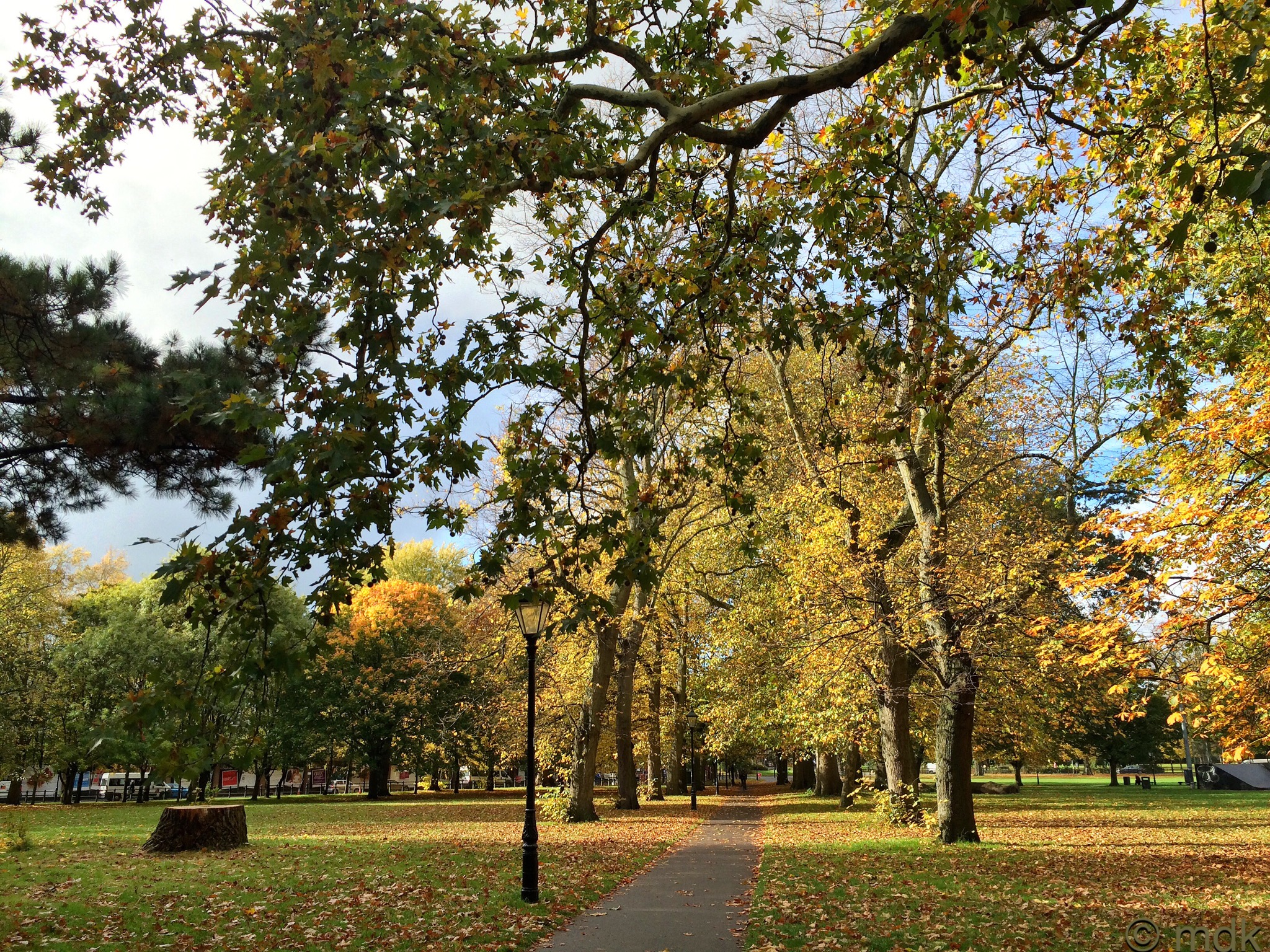 There was blue sky this morning so I thought I’d have another attempt at finding some English Autumn colour. Maybe I’d have more luck in the parks in town and, if not, there was always Costa Coffee. Starting off in the bottom corner of Hoglands Park I had to admit that a bit of sunshine did make a difference. The grass was speckled with russet leaves and the trees along the path looked as if they’d been  painted with gold.

Once the bottom corner of Hoglands Park was part of the Anglo Saxon town of Hamwick and on the western side, towards the centre of town, Roman remains were found. Originally known as Hogsland, this park was part of the medieval Lammas lands surrounding the old town. Townspeople had the right to graze their animals there and, I guess, this was an area popular for grazing pigs. On the other side of Hoglands Park I crossed the road to the bottom corner of Palmerston Park. Here there was even some kicking through piles of maple leaves to make me smile. 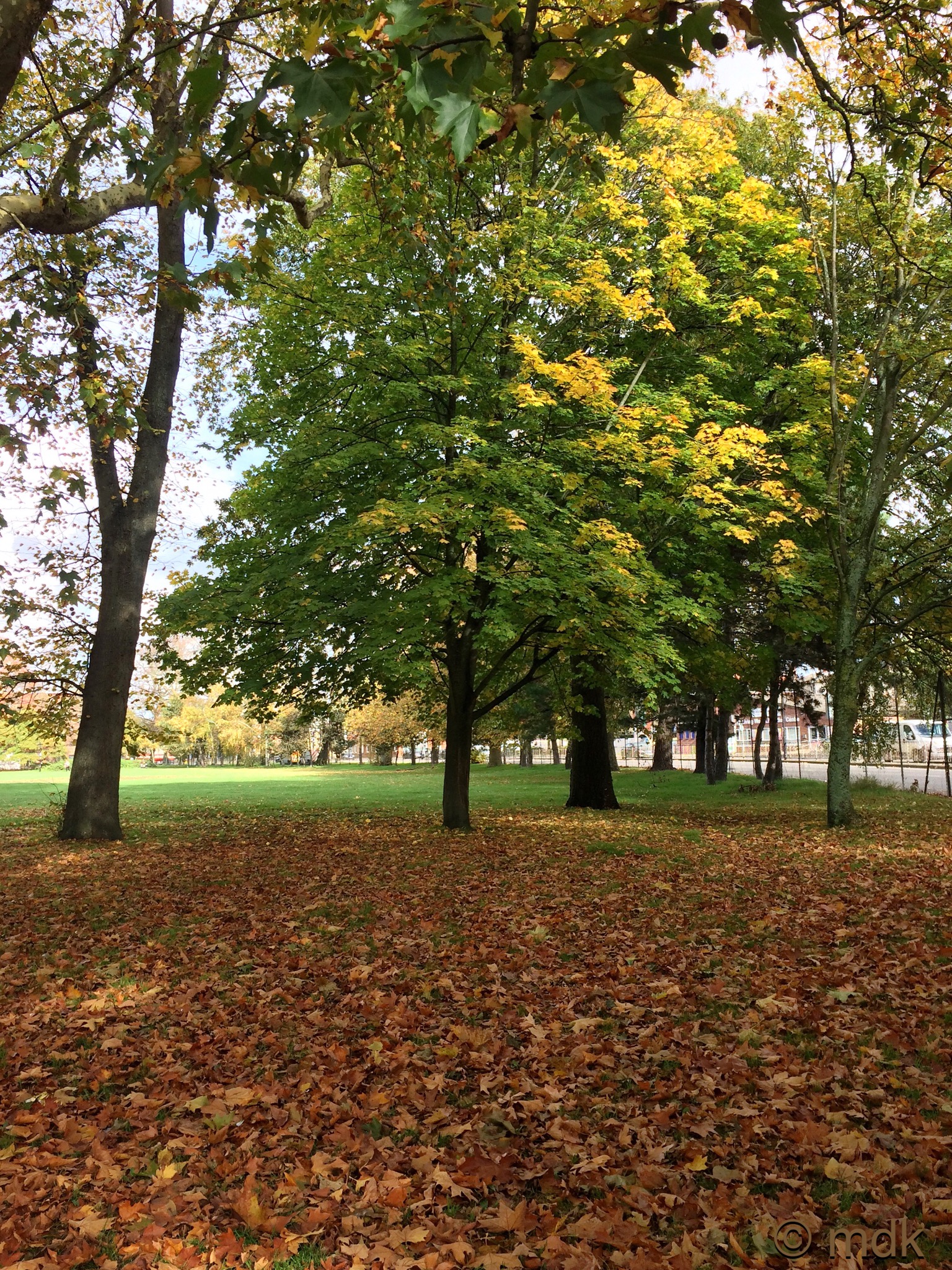 This park once combined with Houndwell Park, where the children’s play area is now, as Houndwell Field and a stream rose close to the top junction of the two modern day parks. In the southern part of Palmerston Park, near the road running between it and Houndwell Park, there was once a canal. Both stream and canal are now long gone and it may not have had the brilliance of Canada, but I had to admit the paths criss crossing the park lined with birches, maples, oaks and horse chestnut in shades of green, citron, amber and copper were quite lovely. The occasional tree stood out in flaming glory. 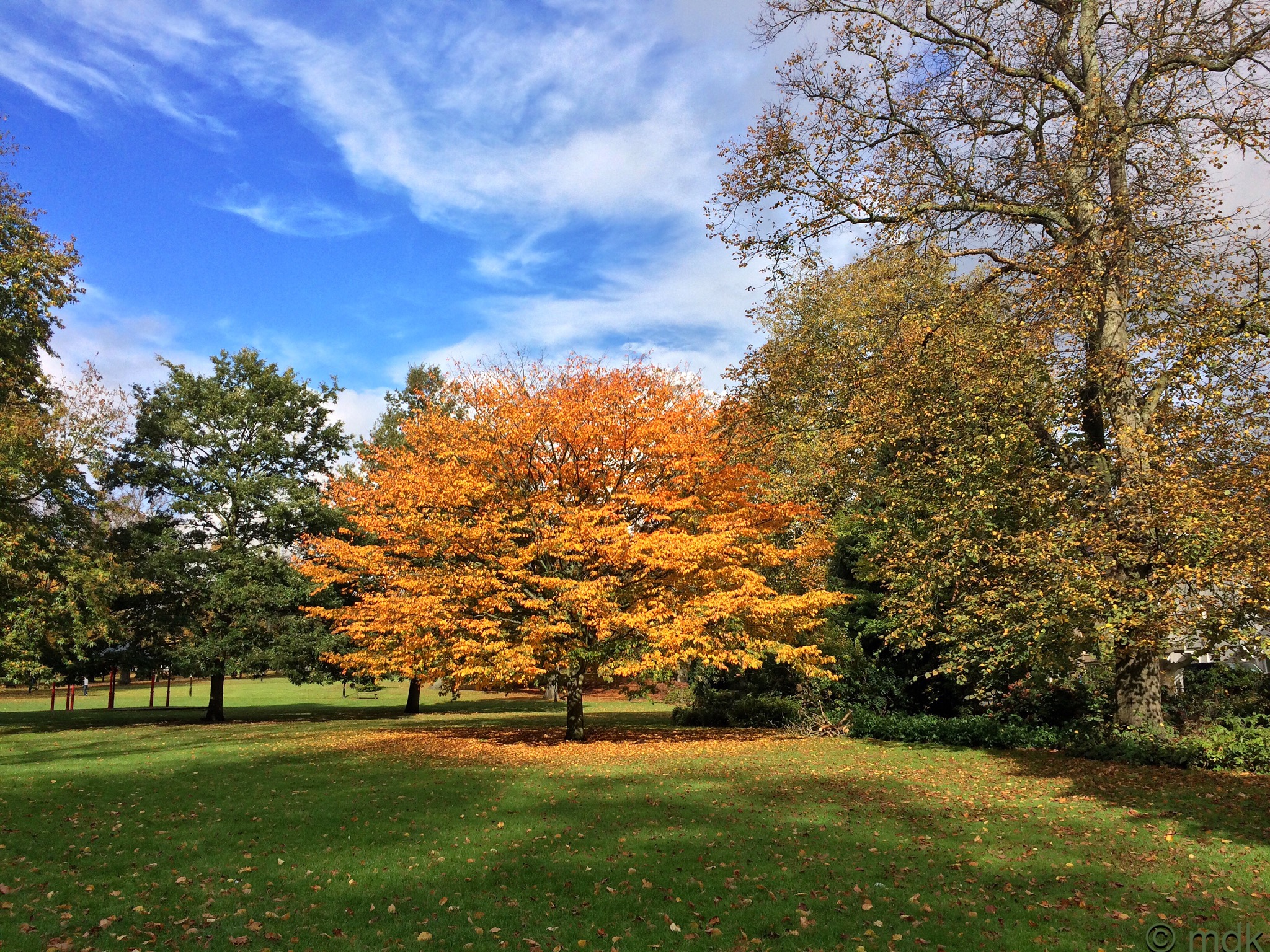 There was no way I could walk through Palmerston Park without paying a visit to the enchanted park near Above Bar. Besides, I remembered the maple tree near the crossroads brightening up my lunchtimes with its brilliant crimson and magenta show when I worked in town a few years back. When I approached it I was expecting reds, what I got was greens with a touch of yellow and the merest hint of wine at the top. This is obviously a tree for another day. 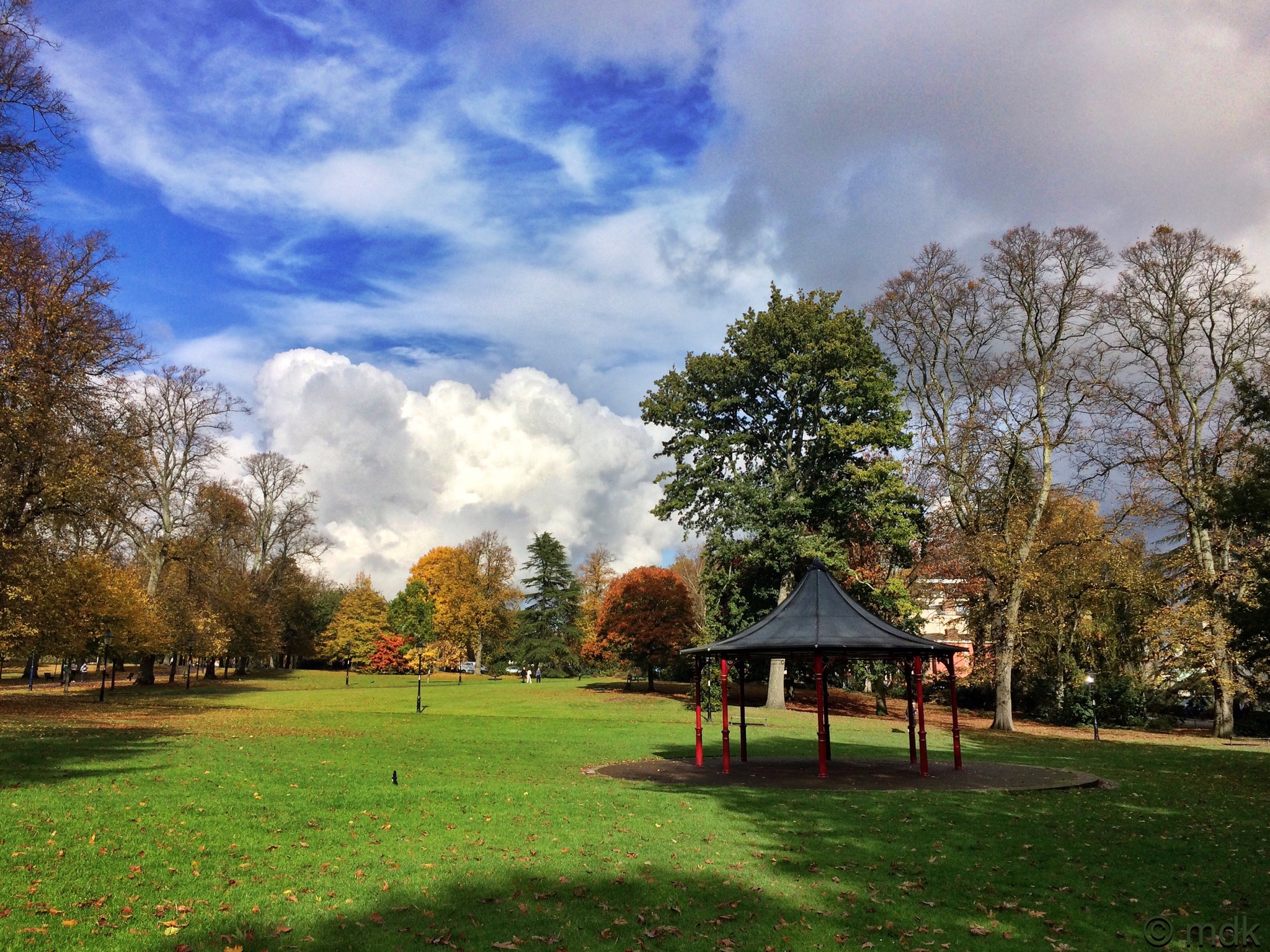 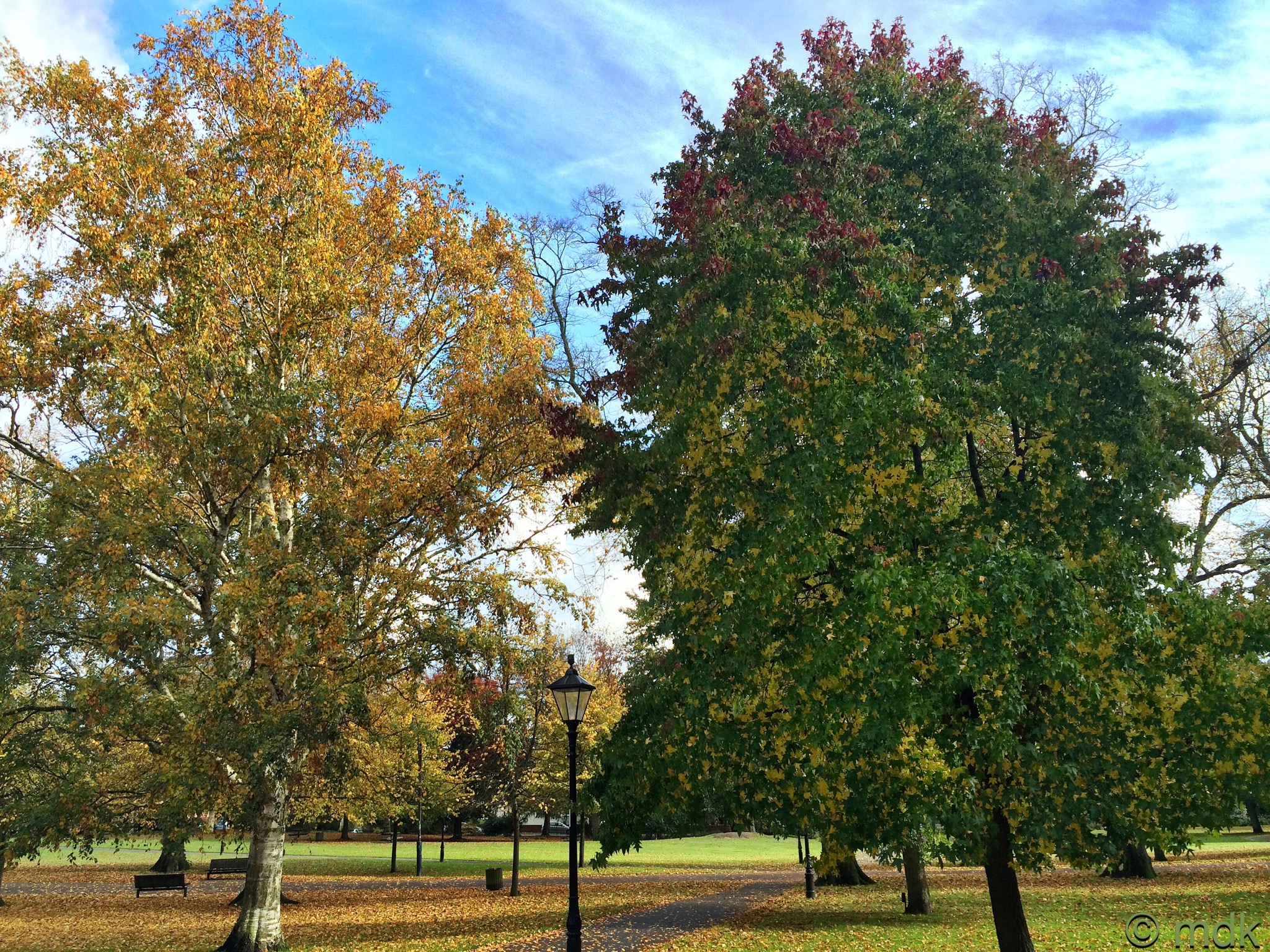 As always, the enchanted park was enchanting, with its twisting path arched by weeping birch. Across the road, the long path through East Park stretched ahead of me, a vision of gold and rust. Beside the path I was surprised to see a few roses still blooming in the rose garden. On closer inspection there were more of them than there had been at the end of July when I last came this way. Back then the heat had caused the petals to fall and there were precious few flowers left. Up through the park I went, heading for the alpine garden on the far side. There was no overwhelming brilliance as there had been in Canada but there were small bursts of colour here and there, enough to make me smile. Towards the top of the park there’s a tall tree that was snapped in two during the storms a few years back. They never chopped it down but it appeared to be dead. It wasn’t. Out of nowhere new leaves have began to grow in an almost miraculous way. Who’d have thought it after all this time? 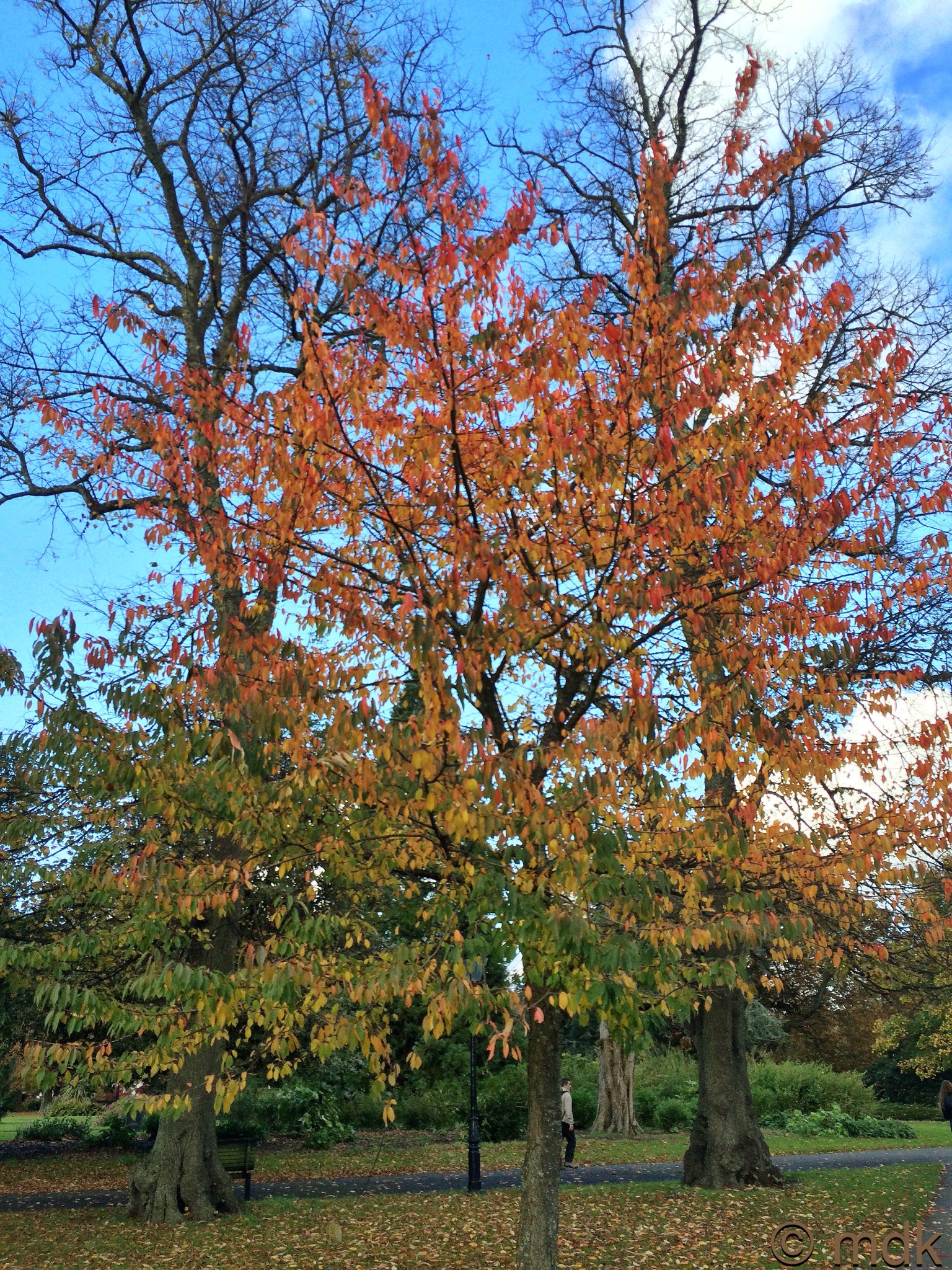 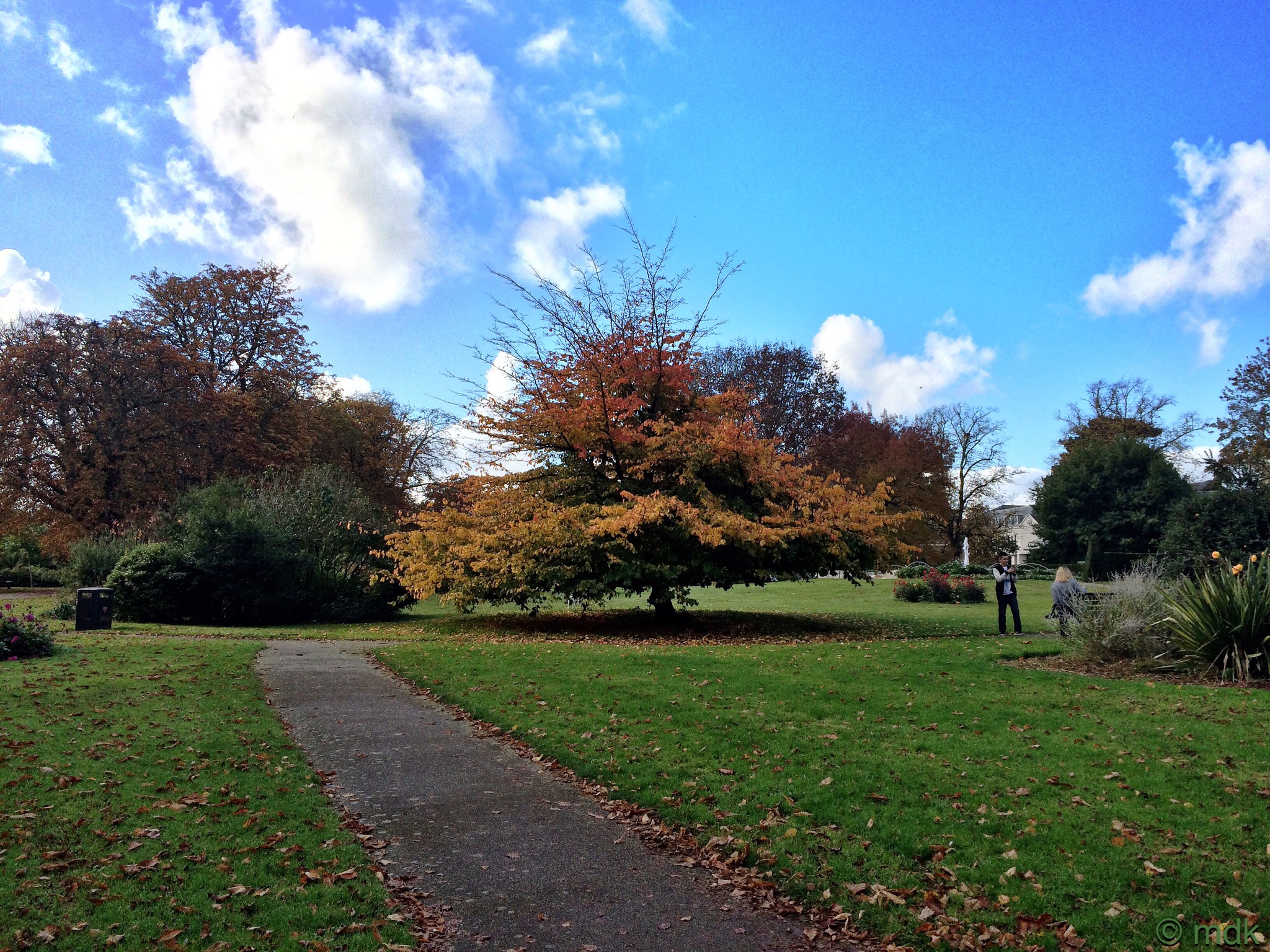 Believe it or not, there was a time, in the 1840’s when the town council planned to build on this land. The Marsh Improvement Act of 1844 gave them the power to buy out Lammas rights and build on the old Lammas lands. This was exactly what they planned to do but the people of Southampton weren’t happy about it and made their feelings clear. In the end the council were forced to think again and slowly, over the next fifteen or so years, plans began to take shape for the beautiful parks we know and love today,

Apart from some cyclamen with their strange turned back petals, there weren’t a lot of alpine flowers in evidence in the 1930’s built alpine garden. At this time of year I hadn’t really expected flowers though, it was the maples I’d come to see and they certainly didn’t disappoint even with a young lad climbing one of them. The winding paths and little bridges were lit up by their crimson leaves and I lingered for a while admiring them. After a stop for some carp spotting in the pond and a quick look at the Titanic Engineers Memorial I crossed the road to the final park of the day. Both East and West Parks stand on land that was once part of St Mary Magdalene leper hospital, known as Marlands. It’s hard to imagine a leper hospital right outside the city walls but, in medieval times, lepers outside the Bargate must have been a familiar sight and it’s thought many of the dead from the hospital were buried under what are now the parks. In West Park oaks and maples were doing their best to put on a show. The maples seemed to be winning with several standing in golden puddles of fallen leaves. As I passed behind the art gallery a squirrel put on a show of his own, dashing about the grass stopping to furiously dig before darting off again. He must have been burying nuts for winter, although, with the amount of fast food left in the bins I doubt he’ll ever need to remember his hiding places. In the past I’ve seen Southampton squirrels running about with giant cookies and burger buns clutched in their hands. It’s a wonder some of them can get up the trees. 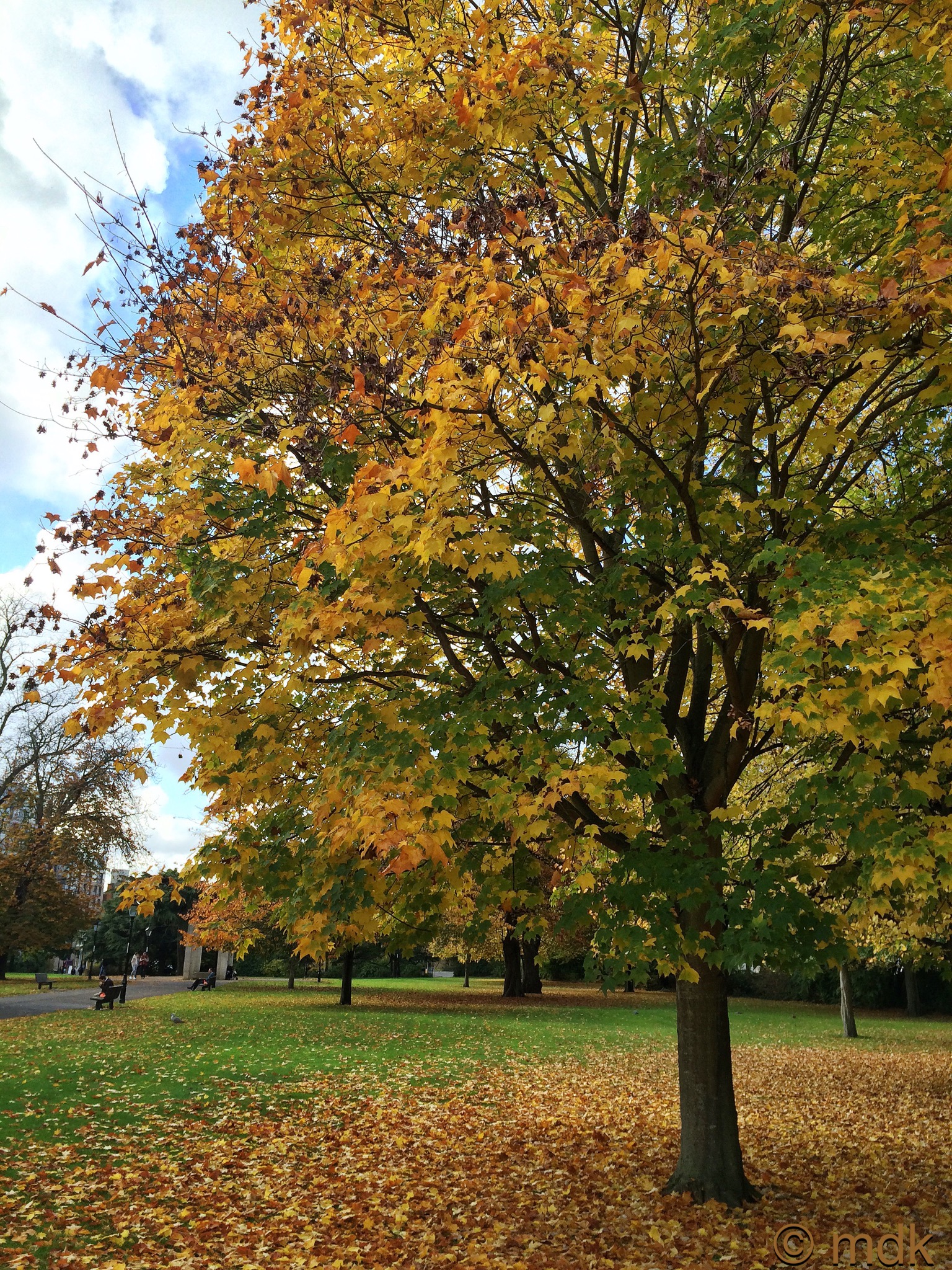 Strolling down towards Paul de Monchaux’s Enclosure sculpture I was glad I’d come out to give the English autumn another chance. The sun and blue skys really made a difference to the autumn leaves and it felt as if it had been worth the walk to visit the parks. At the sculpture I stopped to take a picture of one of the four views it captures, looking up towards the Watts Statue. Plenty of other Sotonians seemed to be out and about enjoying the day too. By this time my stomach was growling. It was time to start heading back. As I marched back through the park though, something very odd caught my eye. Some of the trees seemed to have some large and exotic fruits hanging from them. Puzzled, I changed direction to have a closer look and found a mass of large red paper lanterns hanging from the branches. How strange. Walking a little further I discovered a sign that explained. This was part of a Southampton Chinese Associatiom Mid Autumn Festival. Smiling to myself, I crossed the road and walked back through the wisteria arch towards the city centre and lunch.