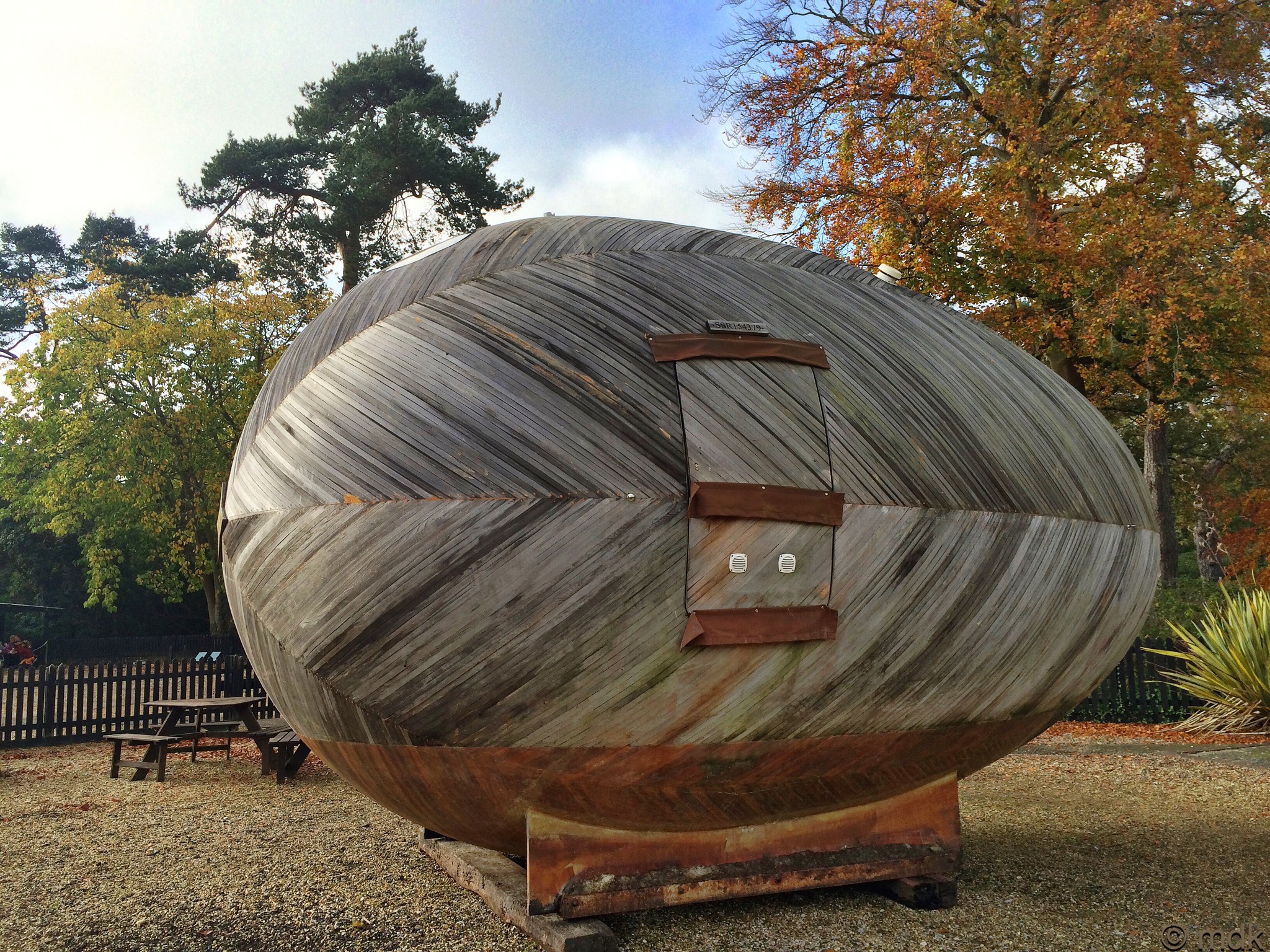 As October drew to a close Commando had a trick up his sleeve to cheer us both up and banish the post holiday blues.
“Let’s go out for a drive and a little walk,” he said late on Saturday morning, when he’d come back from his Parkrun.
“Where to?” I wondered.
“That would be telling,” he said.
So we got in the car and, before too long, I realised we were heading for the New Forest. When we turned left at Totton I thought maybe we were going to Calshot or even Lepe Beach, although it seemed a bit chilly for a beach walk. In actual fact we were heading for Exbury. To be more specific, Exbury Gardens.

The last time I visited these wonderful gardens CJ, Bard and Philo were small boys dashing about and I was with my lovely Mother in Law. The rhododendrons were in flower and the place was a wonderland of pinks and purples that gave me a severe case of garden envy, especially as my own small garden was mostly mud and weeds at the time. This would have been soon after we moved into our present house, twenty odd years ago. Obviously, I was setting my sights way too high. Created in 1919 by Lionel Nathan de Rothschild on the newly purchased Exbury Estate these gardens have had a long time to mature and Exbury is considered one of the best gardens in Great Britain.

The first thing we saw when we arrived was a curious wooden egg like structure. We walked around it scratching our heads wondering what an earth it could be but it wasn’t until much later, when I was at home Googling, that I discovered the surprising answer. In 2013, artist Stephen Turner hatched the idea (excuse the pun) of building a huge pod, come sculpture from cedar and living in it on the Beaulieu River for a year. The egg contained a work area, kitchen, bed, chemical toilet and shower along with a wood burning stove and solar panels for electricity and Stephen did live in it for a whole year. He had no fridge so lived on dried food and things he gathered from the shore. He also made ink from oak galls and pens from reeds. It sounds idyllic and I imagine he was sorry to see it come to an end. 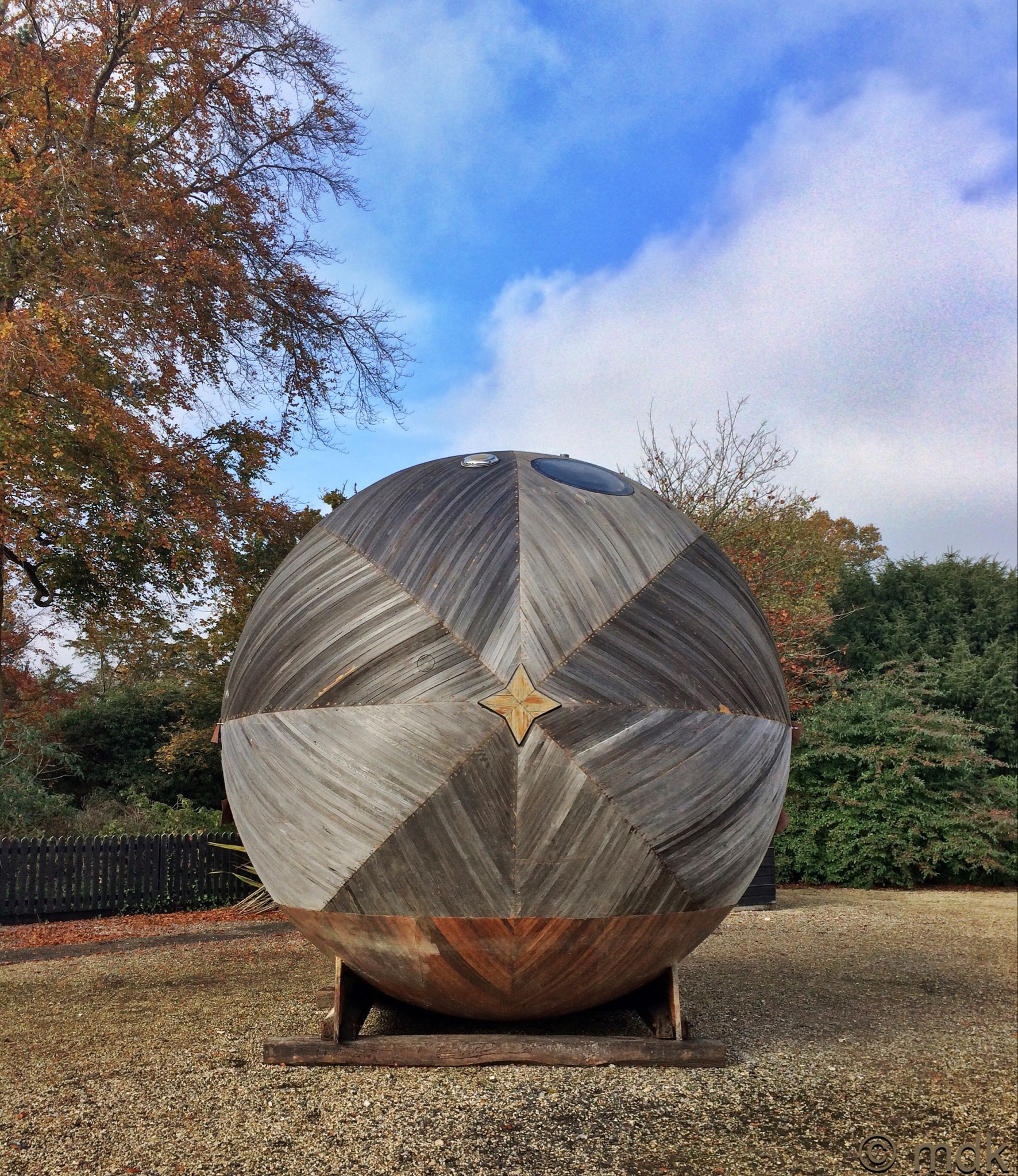 Once we’d paid our money we set off with no real plan of action. A couple of very slow, elderly ladies were in front of us and, when a little way along the path, they turned right we turned left simply to avoid being stuck behind them for the whole afternoon. This took us to Gilbury Bridge. The bridge was first recorded on the OS map of 1931. Built of limestone ashlar with a decorative balustrade made from beautifully curvaceous stone columns it crosses Gilbury Lane, a minor public road running through the gardens. 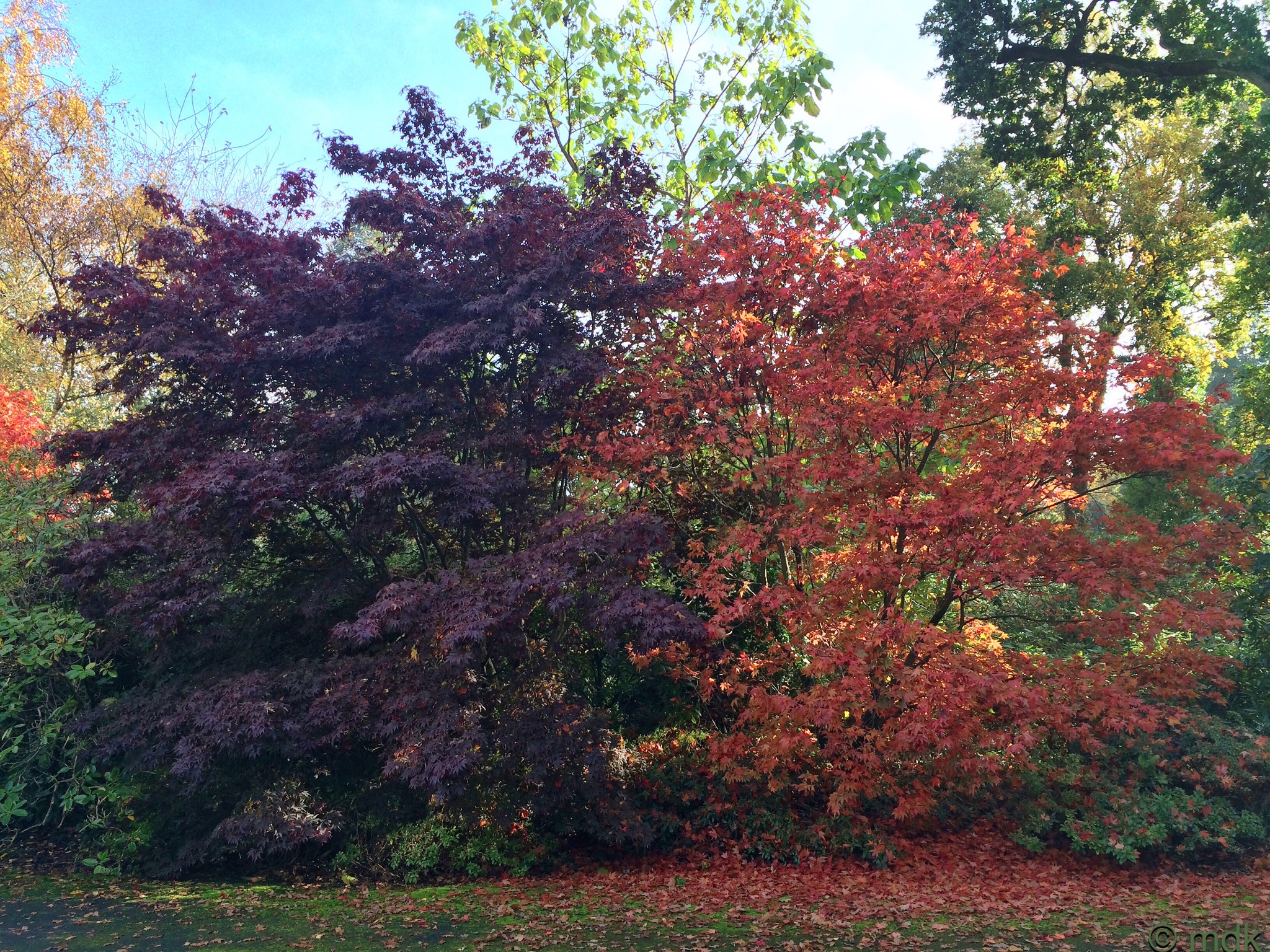 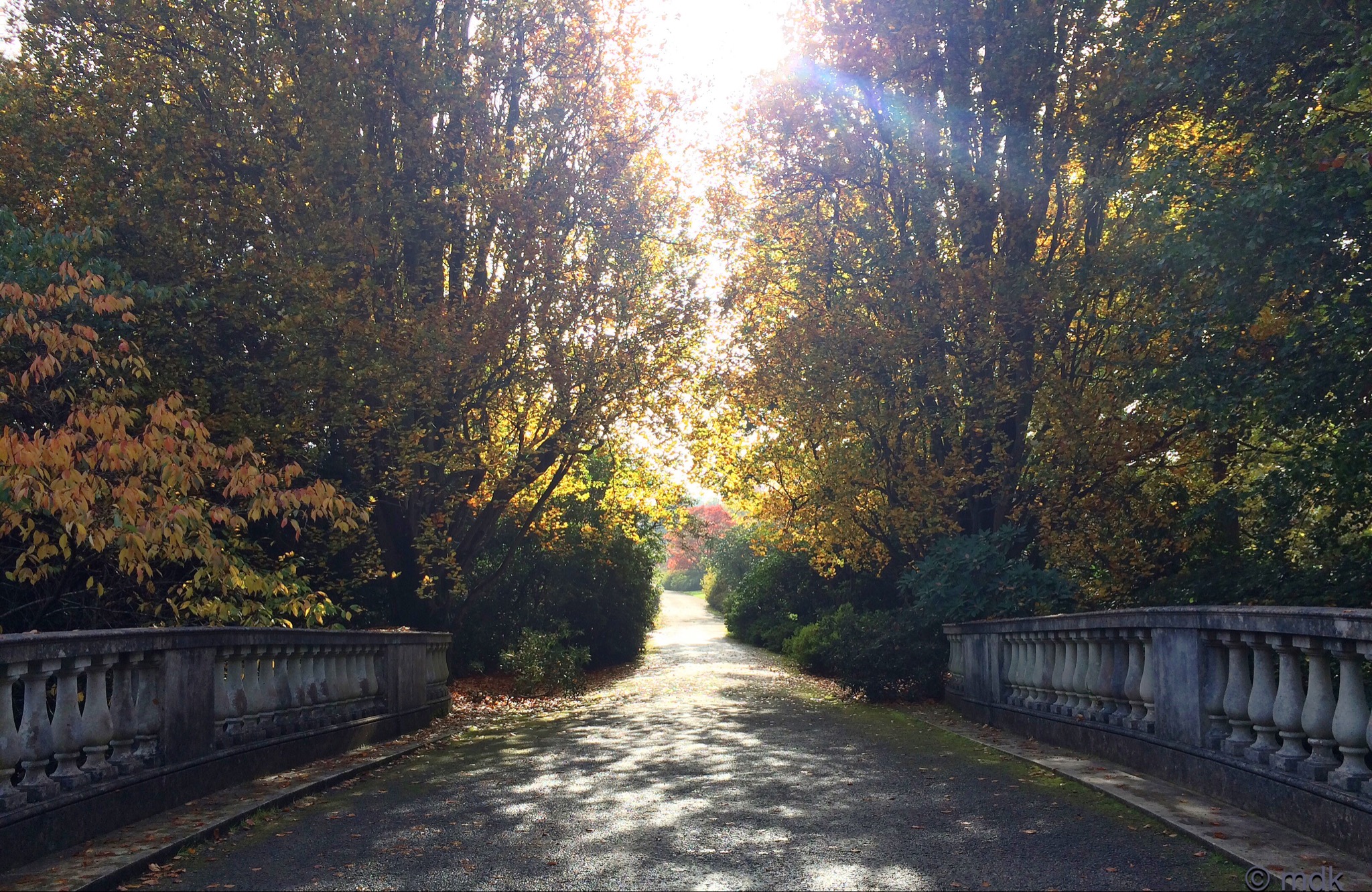 Commando was armed with a map, acquired when he bought the tickets so it’s possible me knew where we were and where we were heading. With no map and no idea I trotted along blindly enjoying the fresh air and blue sky. We’d turned off the Main Drive shortly after the bridge and passed through an area filled with hydrangeas. Sadly, most were past their best but there was still a little colour to be seen amongst the faded glory. 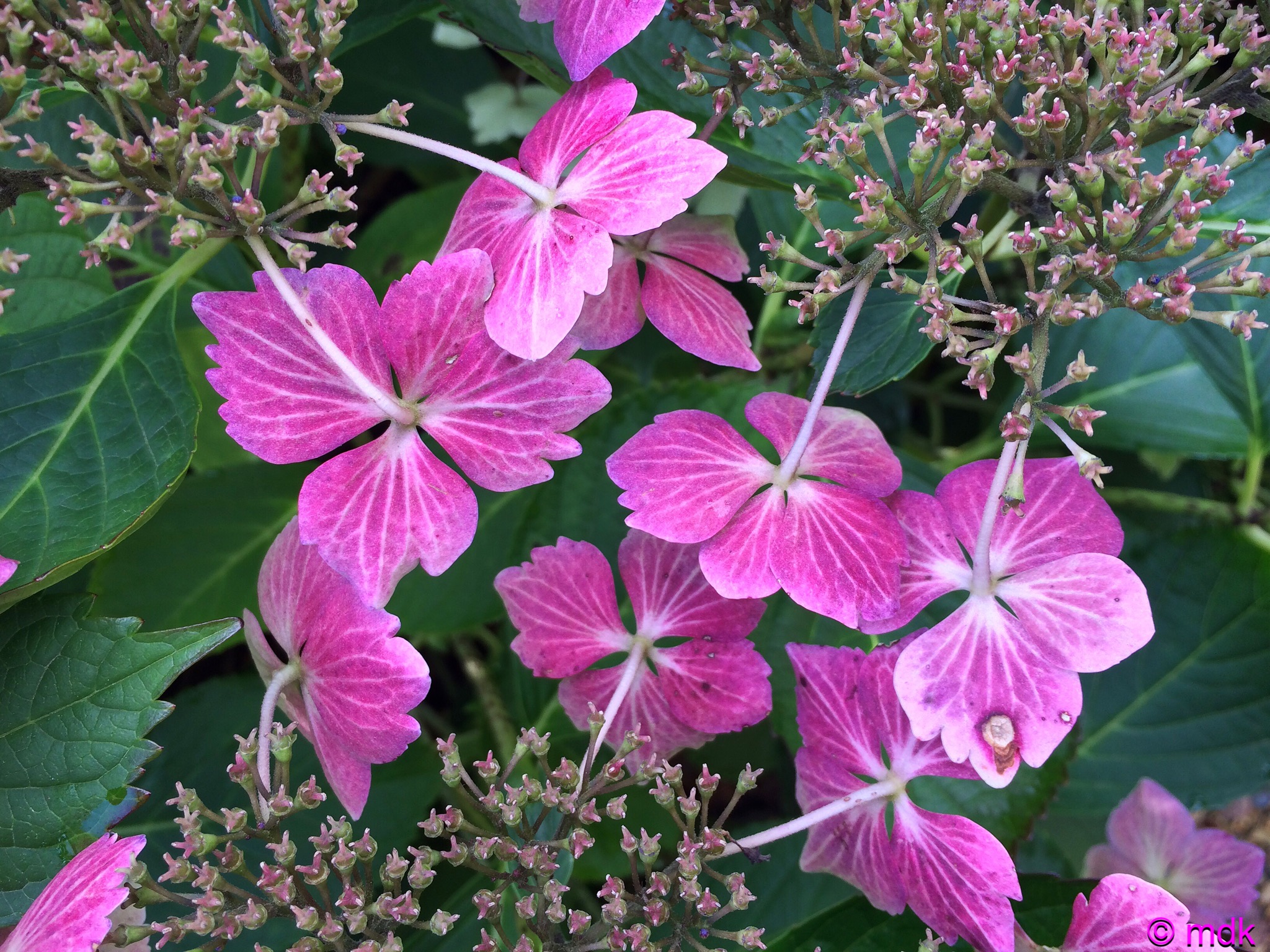 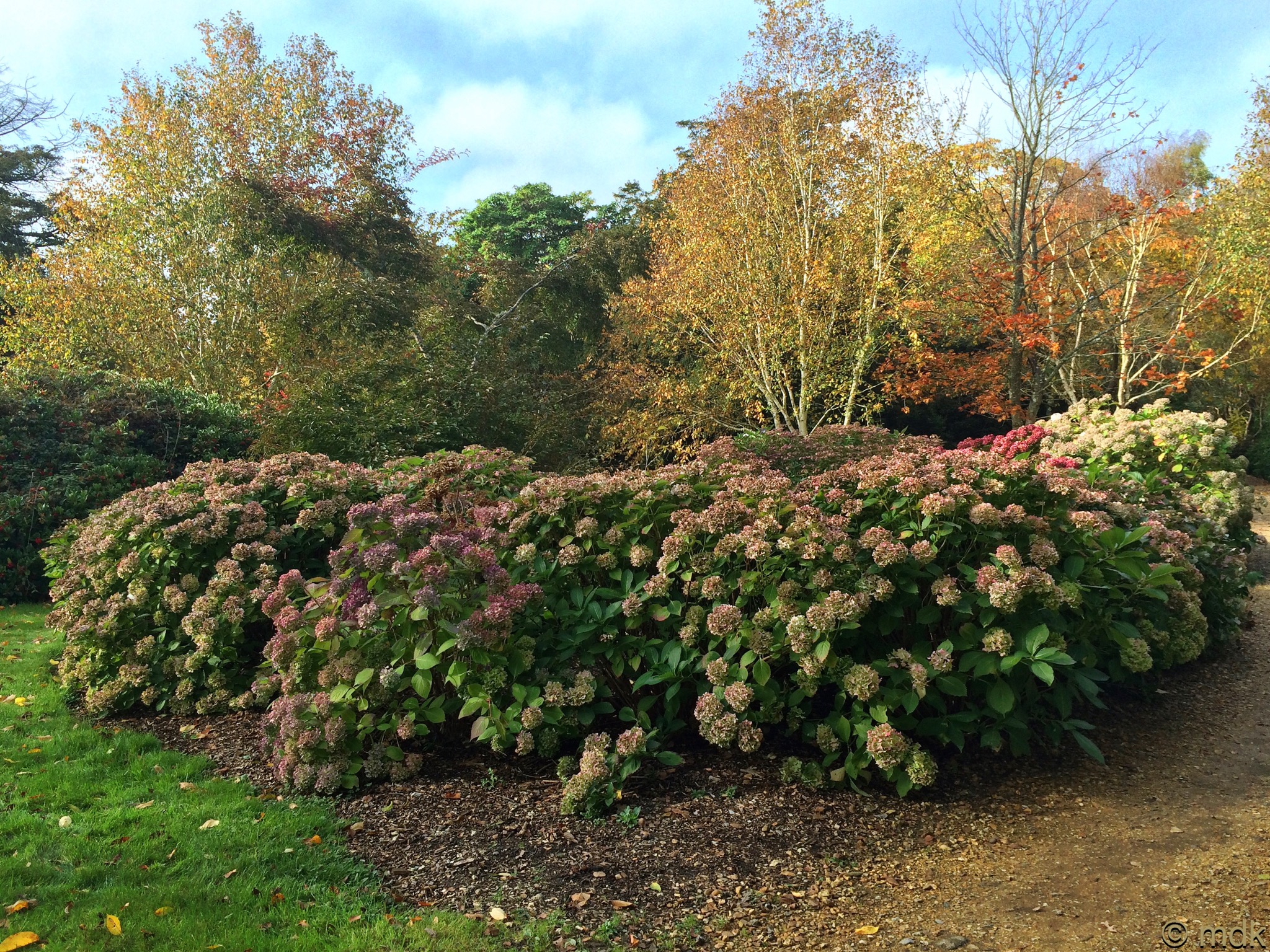 On we went, past swaying pampas grass until we emerged in a small, paved area with tables and benches. Better still there was a small cafe. We hadn’t been walking long but, let’s face it, when have I ever passed up a coffee drinking opportunity? It was a pleasant place to rest sipping coffee and nibbling on a cheeky biscuit. As we sat admiring the interesting arrangements in planters the odd leaf tumbled down on us. 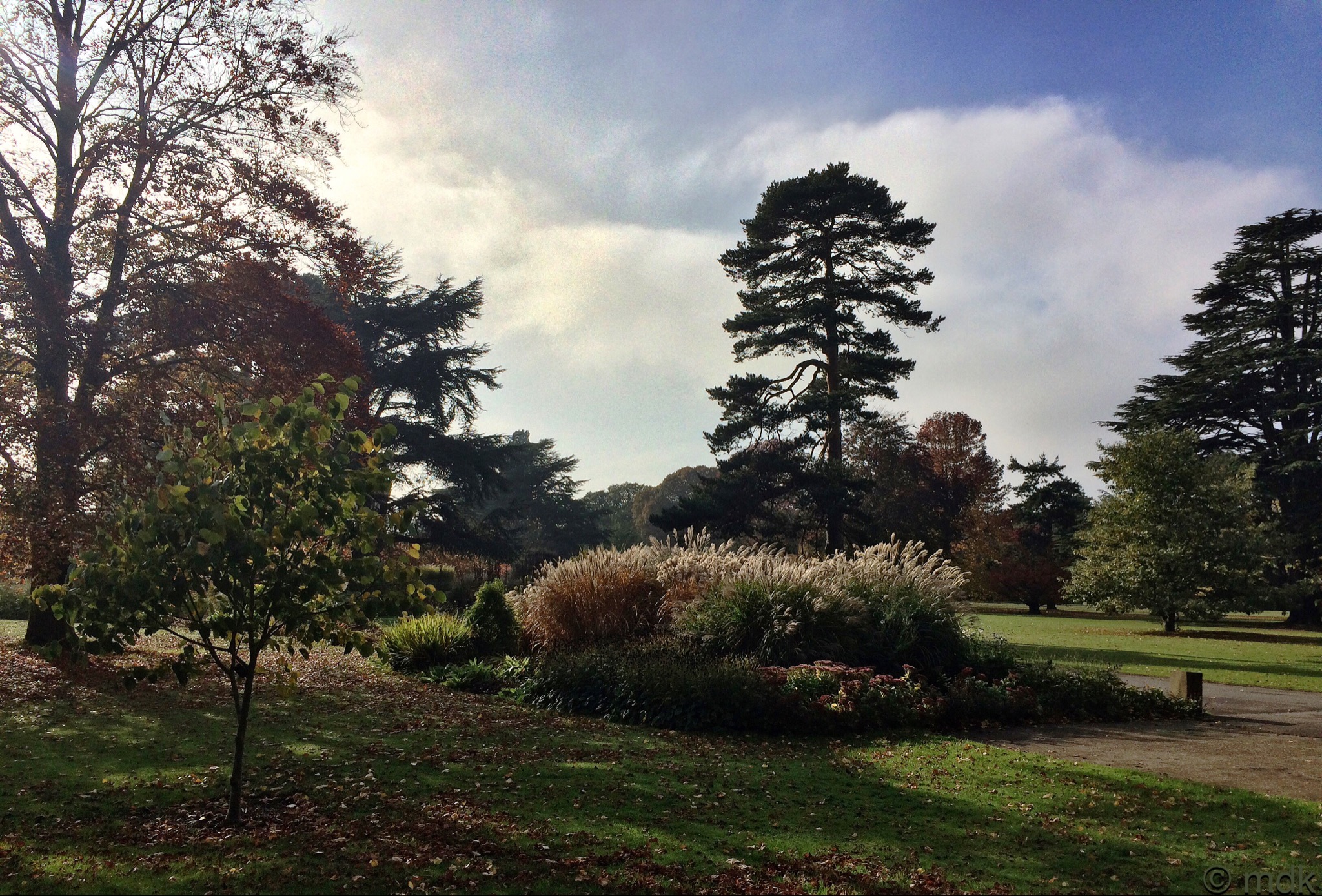 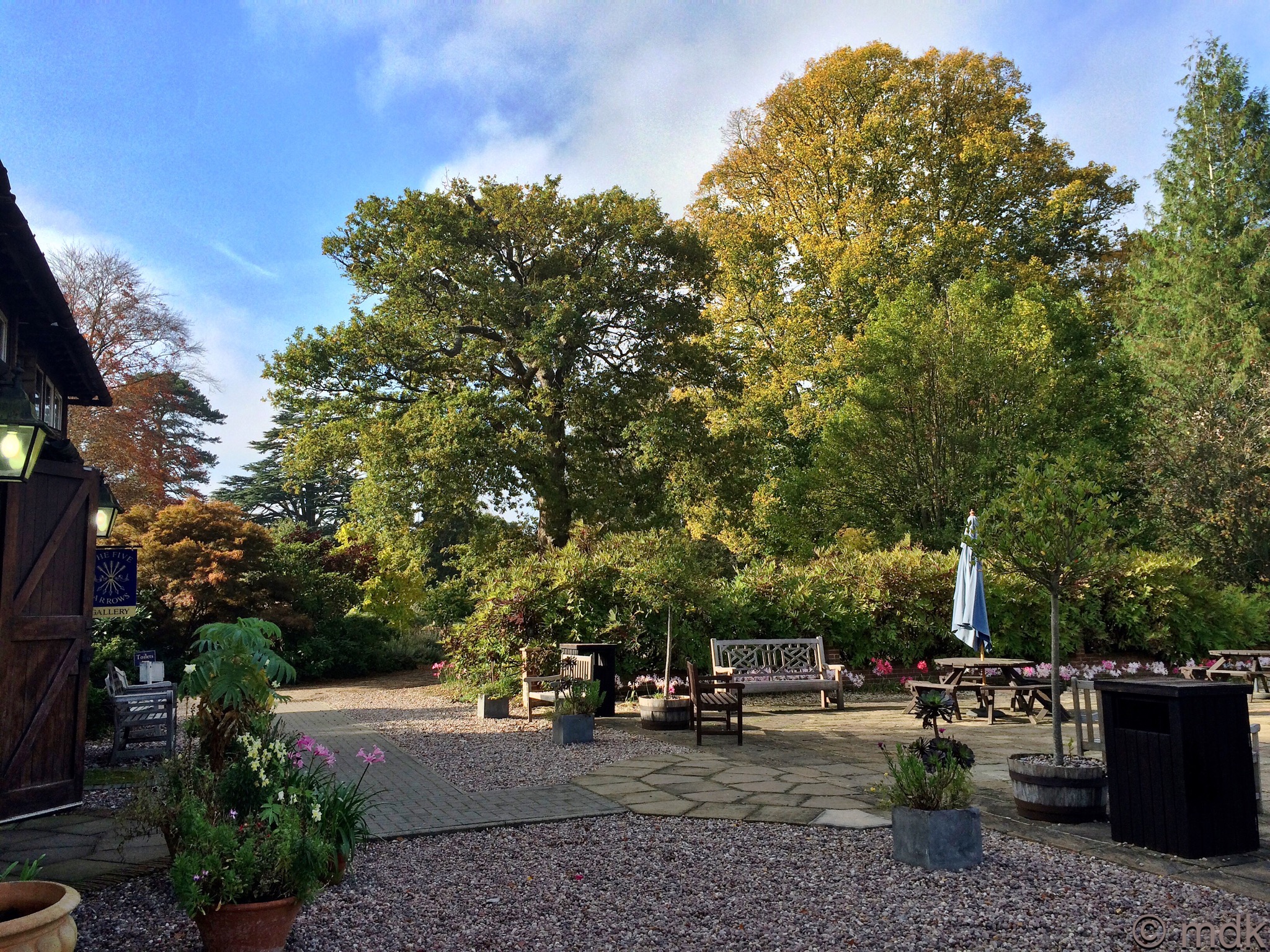 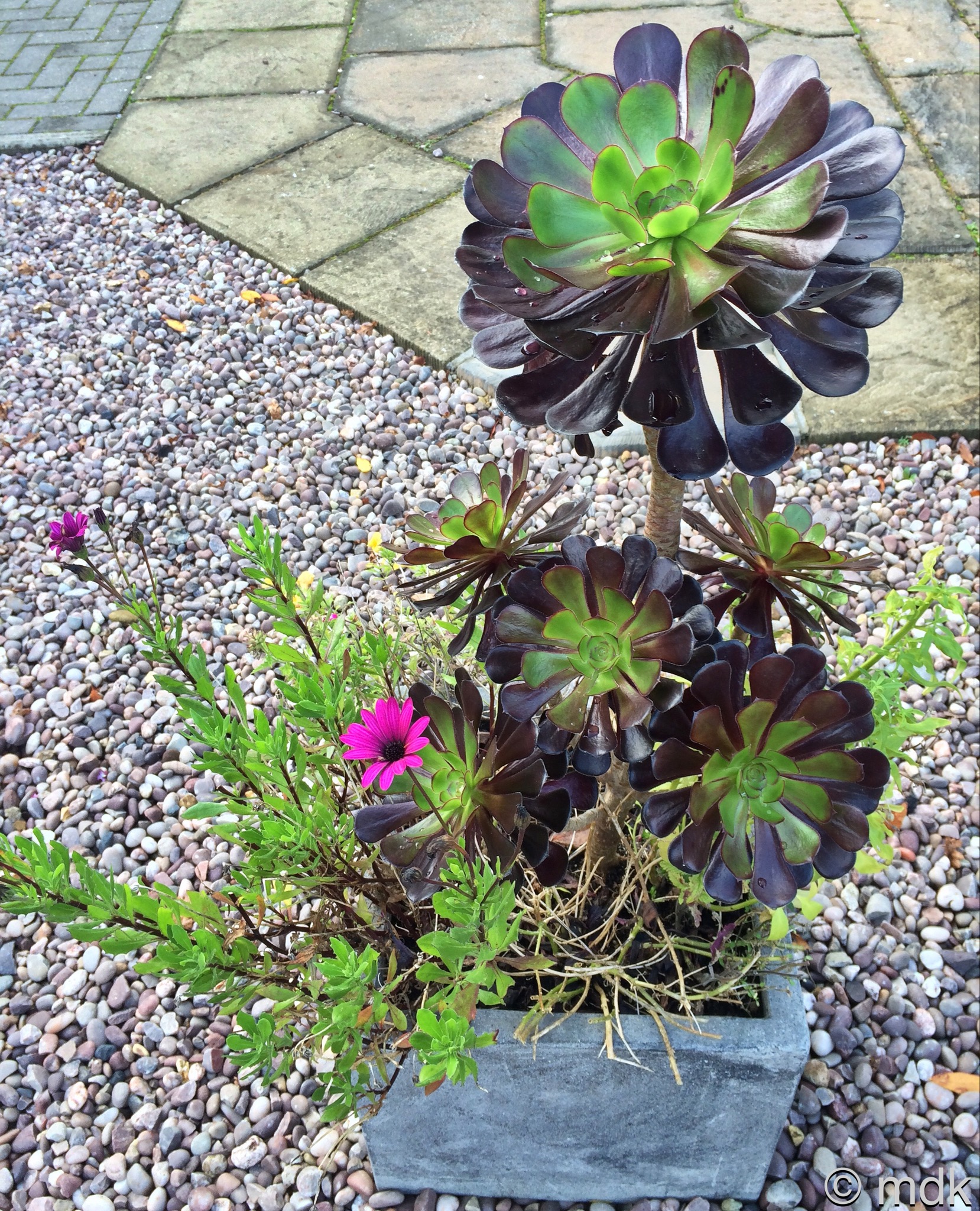 Leaving the cafe we passed Exbury House, a neoclassical mansion, once home to Lionel Nathan de Rothschild. When de Rothschild bought the house in 1919 it was almost derelict but he had it remodelled and began creating a new garden around it, collecting plants from all over the world, in particular rhododendrons and azaleas. Another of his passions was hybridising different species and Exbury is filled with his creations. When Lionel died in 1942, the house was requisitioned by the Royal Navy for the planning of the Dieppe raids and D-Day landings. The estate was used for experimental firing and more than three hundred men lived within the grounds. 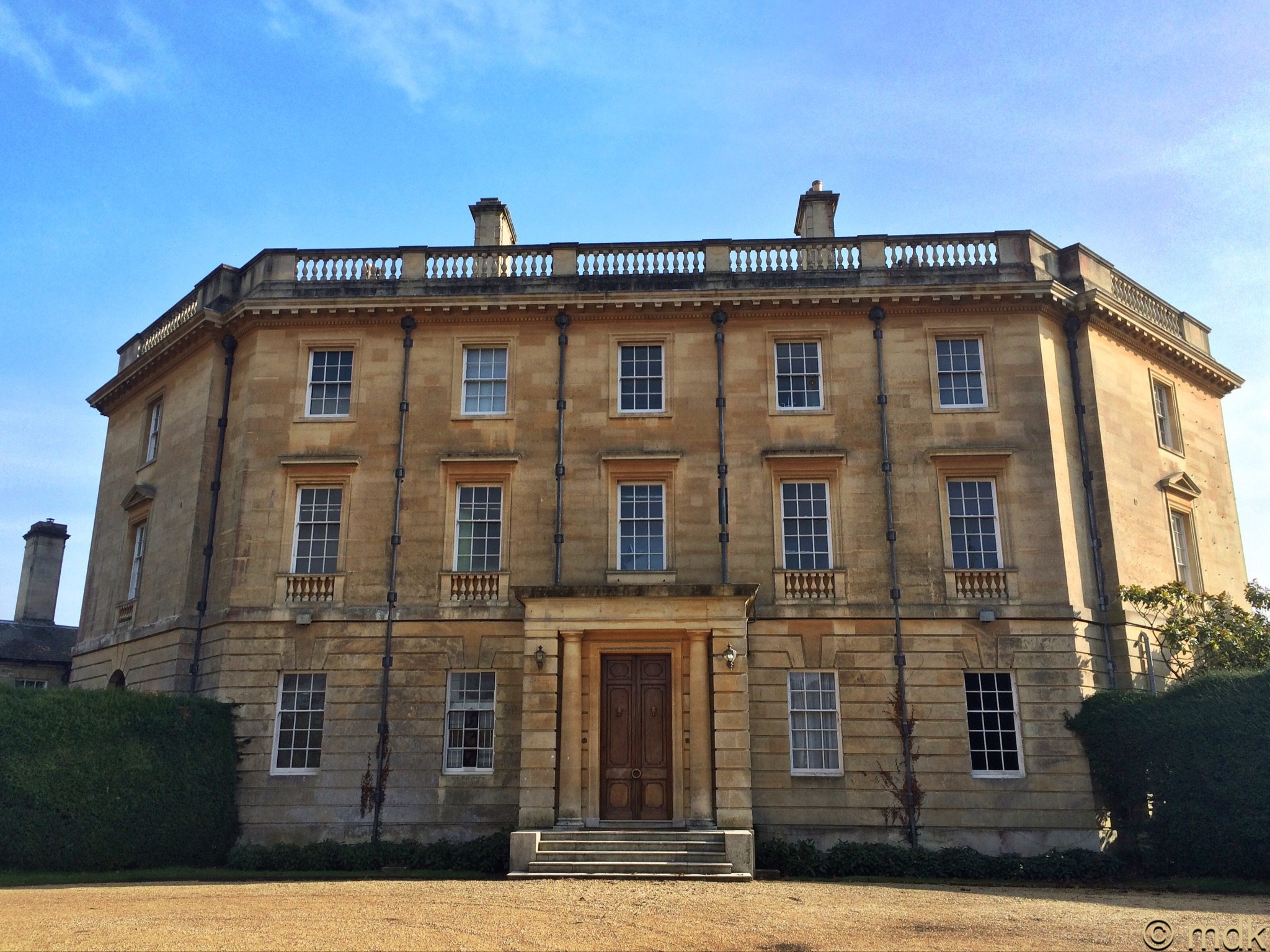 After the war Lionel’s son, Edmund Leopold de Rothschild, restored the house and gardens and they were opened to the public in 1955. Edmund carried on where Lionel left off and both were awarded the Victoria Medal of Honour by the RHS in recognition of their horticultural achievements. Edmund was, by all accounts, quite a character, driving around the gardens in his small car, stopping to chat with visitors and occasionally chopping back the odd dead branch. He continued this right up until his death in 2009 aged ninety three. His brother Leopoldo then took over, creating a charitable trust and today the task has fallen to Lionel’s grandsons, Nicholas and Lionel.

Our next stop, according to the signs, was the Wiggly Tree. Quite what that was I didn’t know but, when we passed some wonderfully twisted and contorted rhododendron branches, I thought we’d found it for a moment even though a rhododendron is not really a tree. We stopped for photos anyway. What a pity the flowers were over.

The real Wiggly Tree was a little further on and far more dramatic. We crunched through fallen leaves  into a small clearing with a bench and, what appeared at first, to be two trees, possibly three. In the dappled light the place seemed otherworldly, as if at any moment a hobbit or a wizard would appear around the corner. In actual fact this was all one tree, an Oriental plane (Platanus orientalis), a tree famed for its longevity and spreading habit. This particular specimen predates the house and garden by quite some time. It was planted in around 1730 and is still going strong. 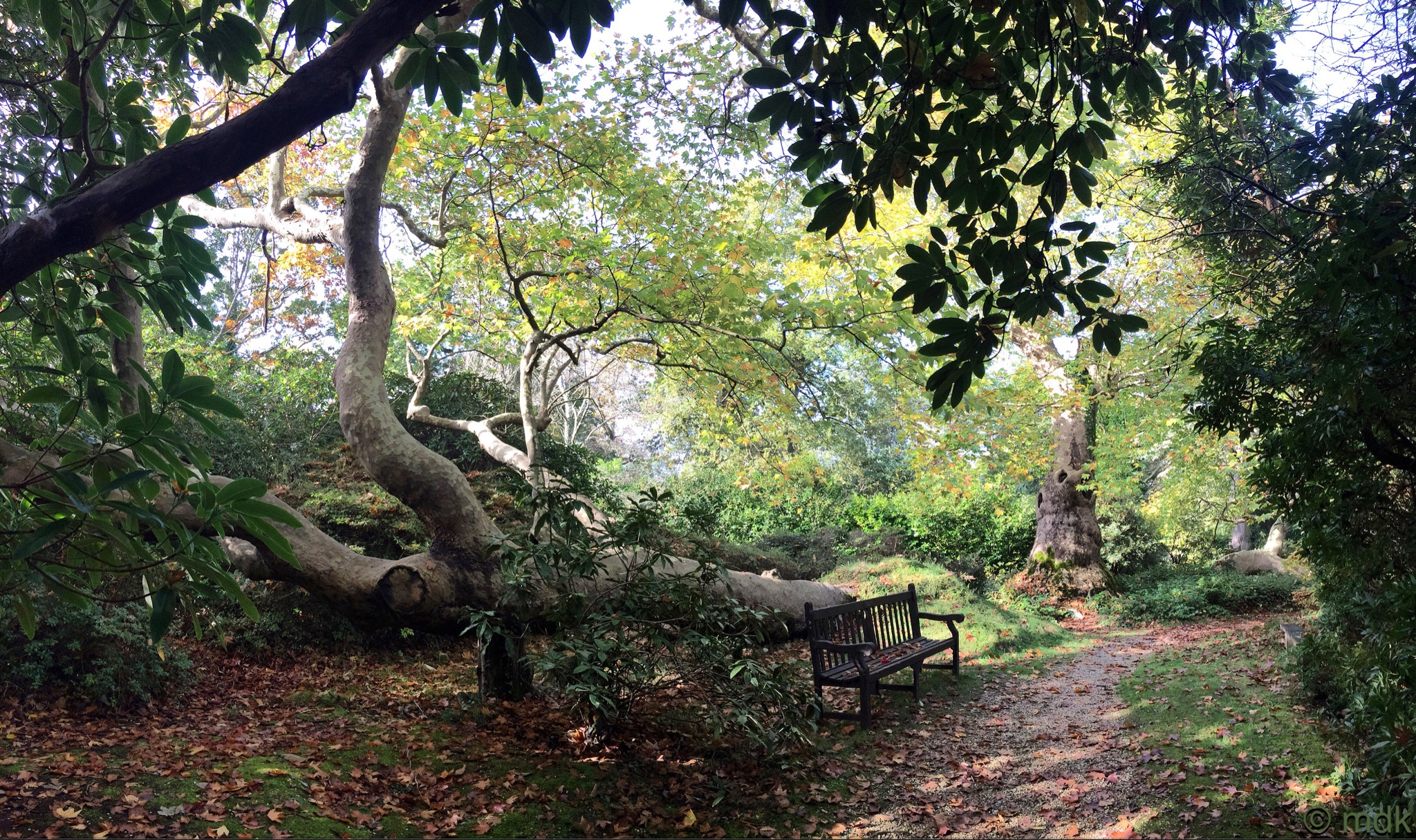 The large, hollow main trunk stands upright encircled with mysterious looking holes which are, apparently, home to owls although we didn’t see any. The bark is gnarled and knobbly, peeling in some places and, in others, thick with moss. Twisting roots wriggle from the bottom of the thick trunk. Surrounding it are several other trunks, all laying horizontally where the tree has, at some point, naturally layered itself. These secondary trunks are smoother with a camouflage pattern. They twist and writhe across the ground, arching across the path in places, supported by stout wooden stakes. Above, the canopy of palmate leaves were  a mixture of green and gold. It isn’t just a thing of beauty either, the leaves and bark have medical uses, a dye can be made from the twigs and roots and the timber, called lacewood, is prized for making furniture. 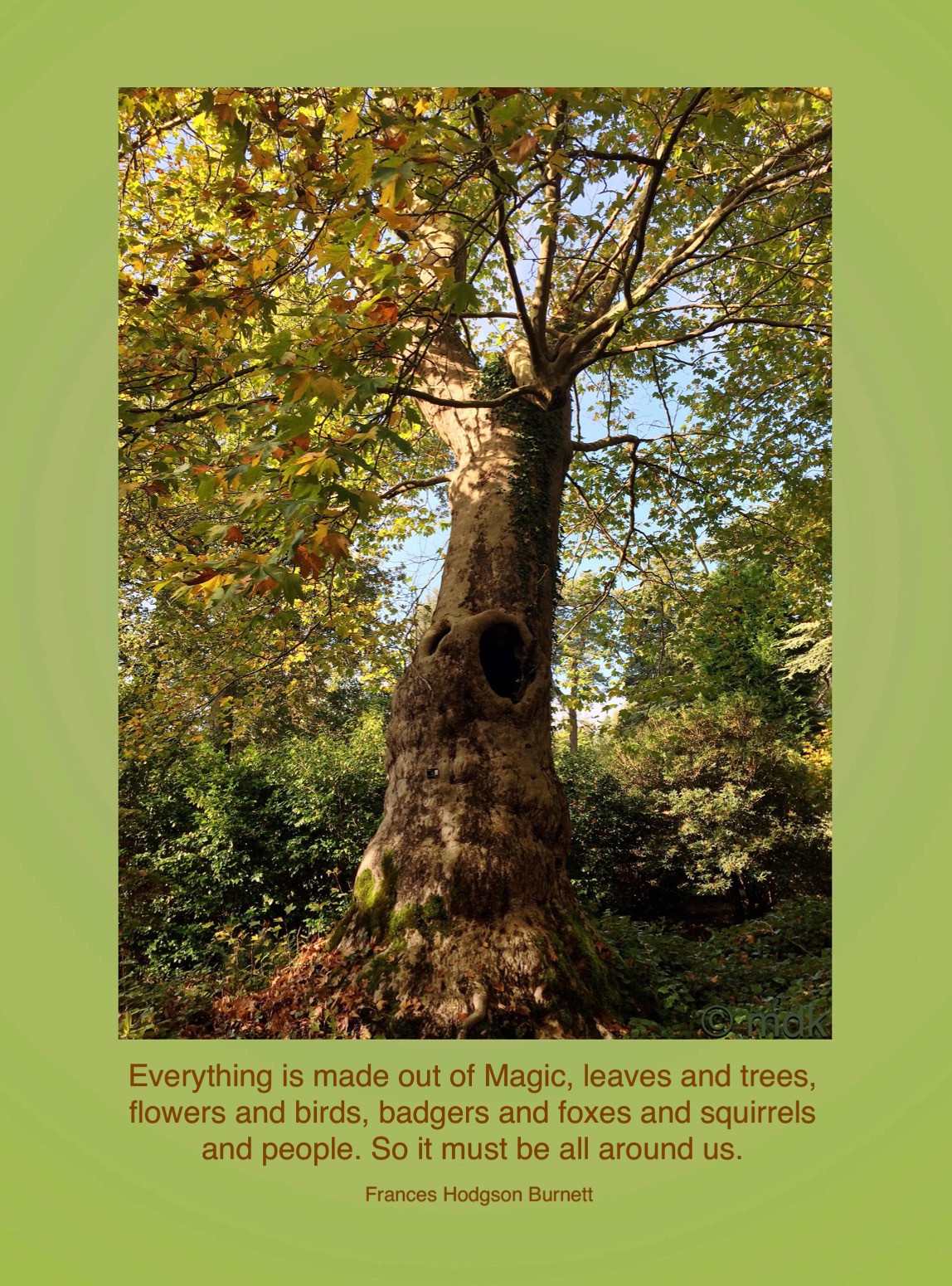 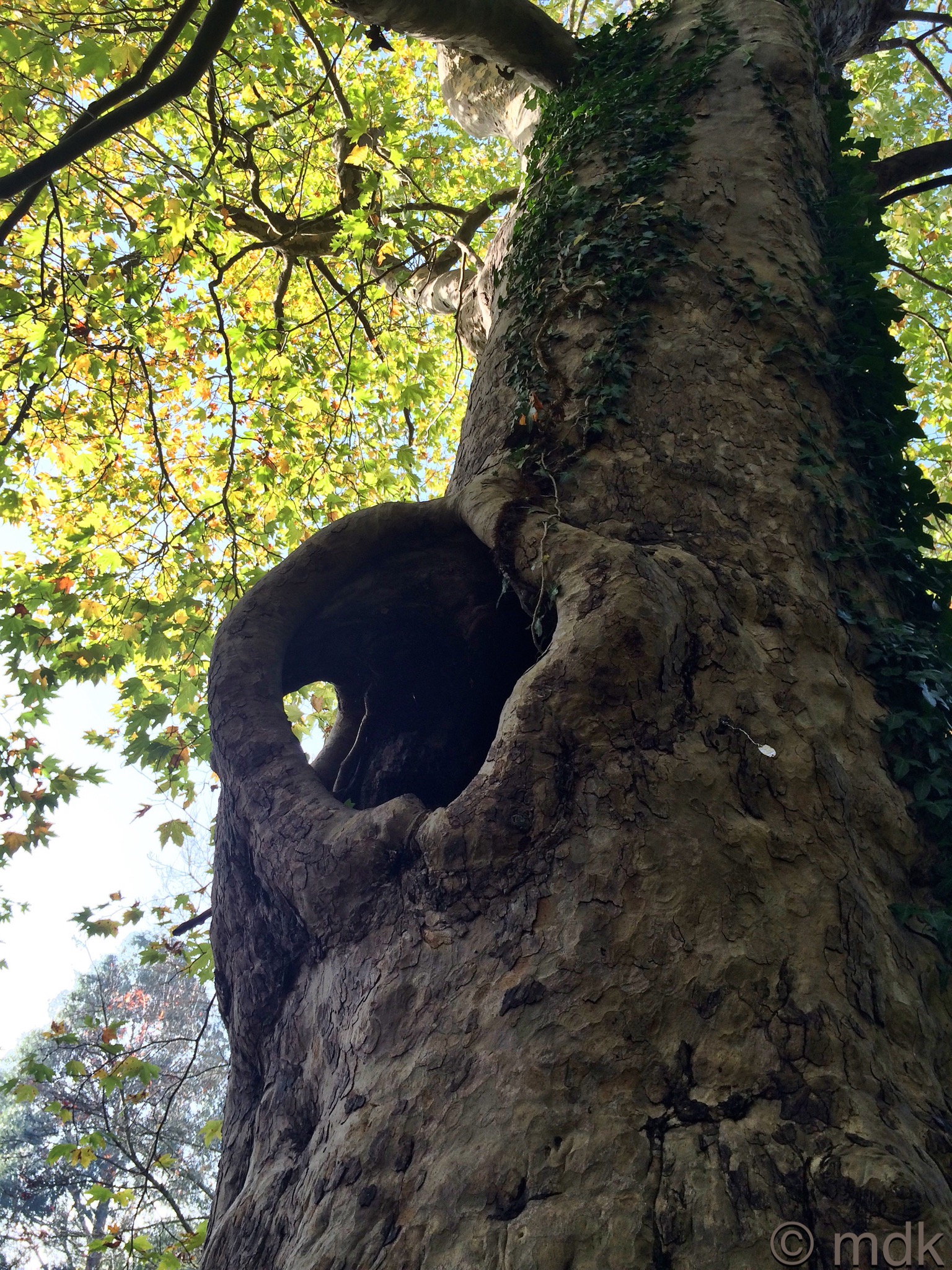 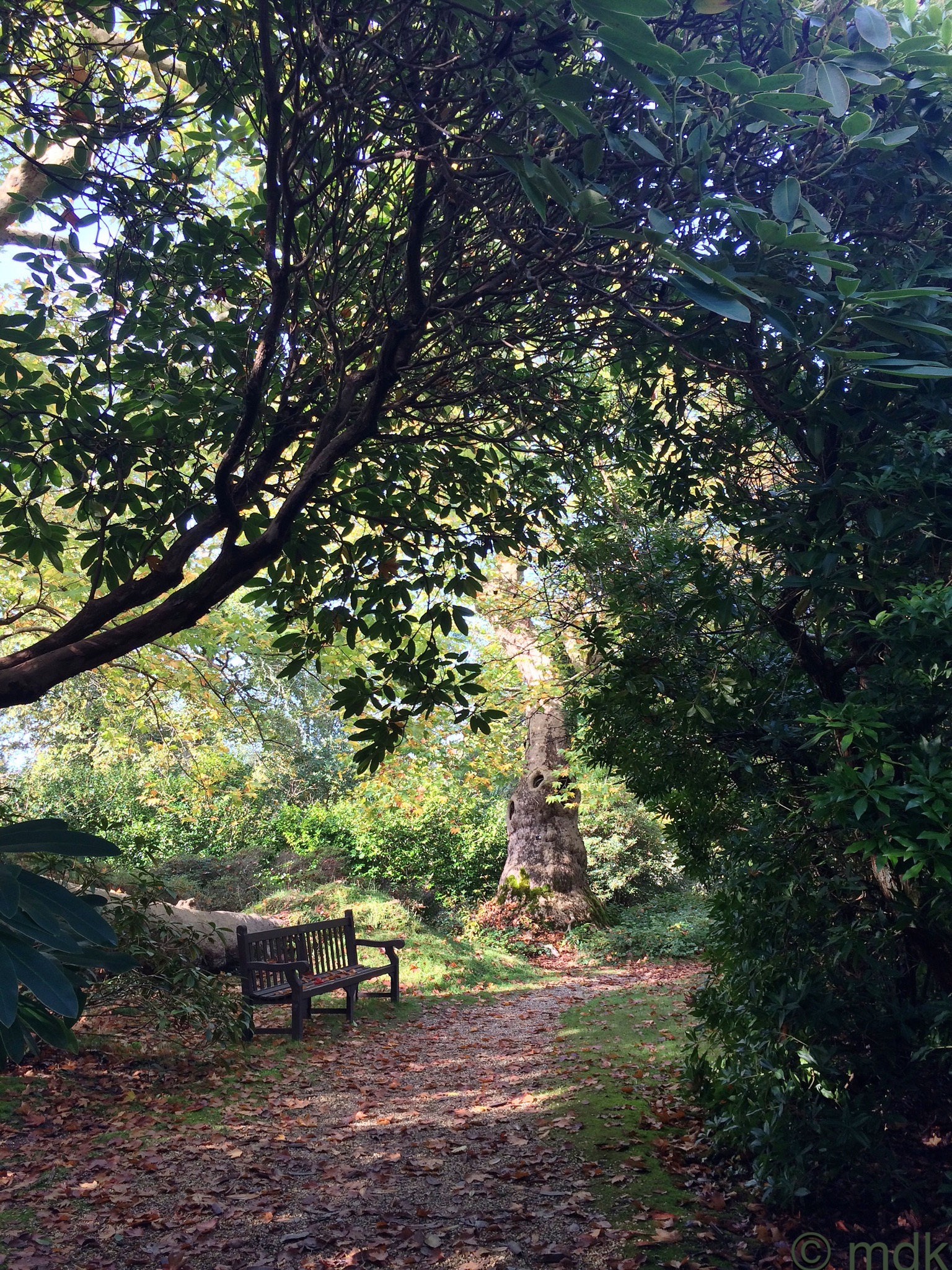 The early history of Exbury is hazy, although it is recorded in the Doomsday book of 1086 and it’s known that the town of Exbury was owned by the Berkshire family in 1217 when it was destroyed by the French as they retreated from their defeat at the Battle of Lincoln. The next known owner of the estate was William Mitford who purchased Exbury in 1726 and may have planted the Wiggly Tree. William certainly planted Lebanon cedars near the farm that would become Exbury House and avenues of trees radiating out from it. He also created the Ladies’ Walk including Top Pond and, after we’d left the Wiggly Tree and the enchanted glade behind, this was where we headed.

At any time of year this pond would be a beautiful sight but, in autumn, with a haze of gold and russet leaves reflected in the still water floating above the teaming hubbub of koi carp bubbling just below the surface it’s breathtaking. We’d come seeking autumn colour and here we found it in abundance, on the trees and reflected in the water of the pond. 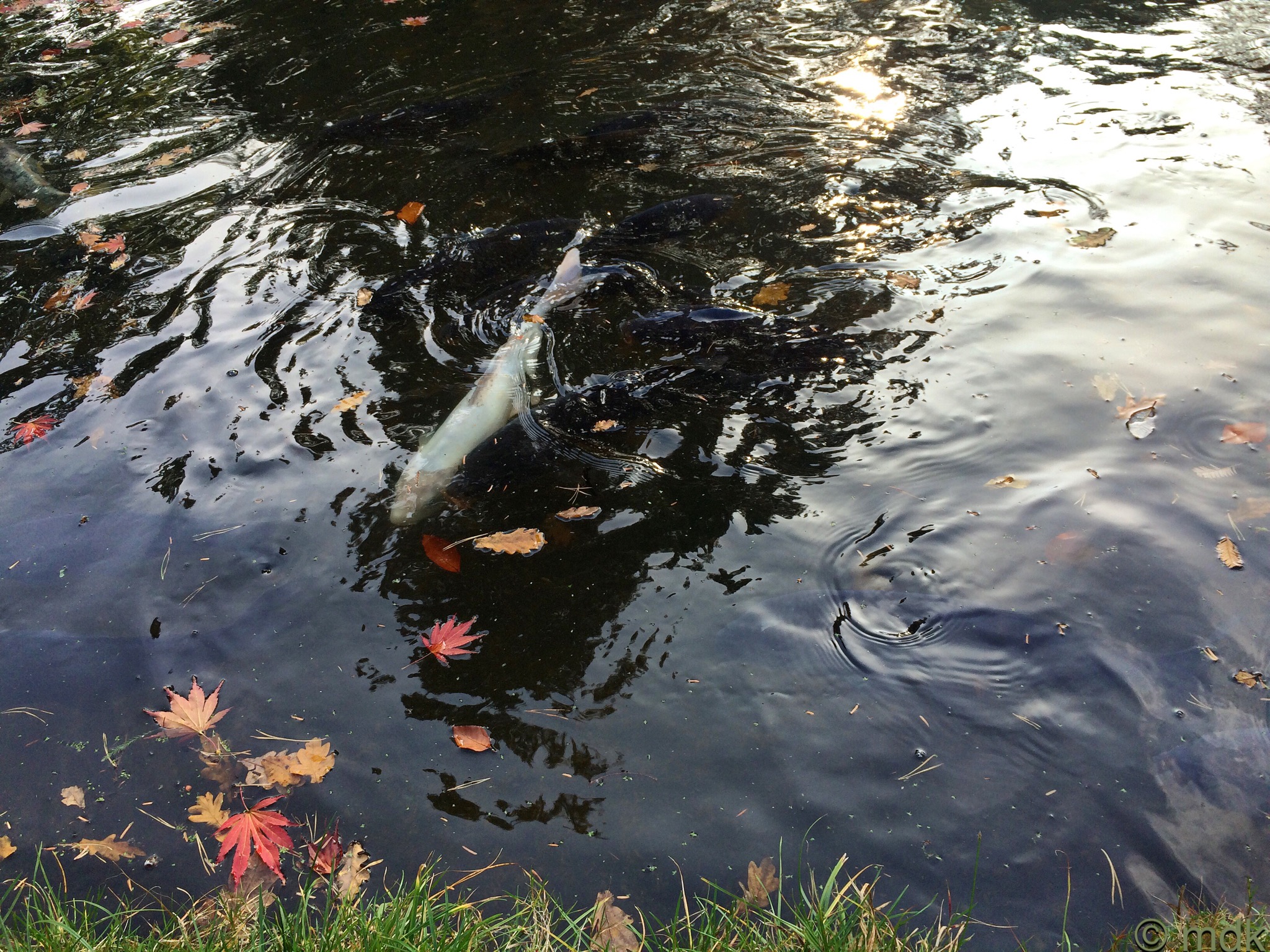 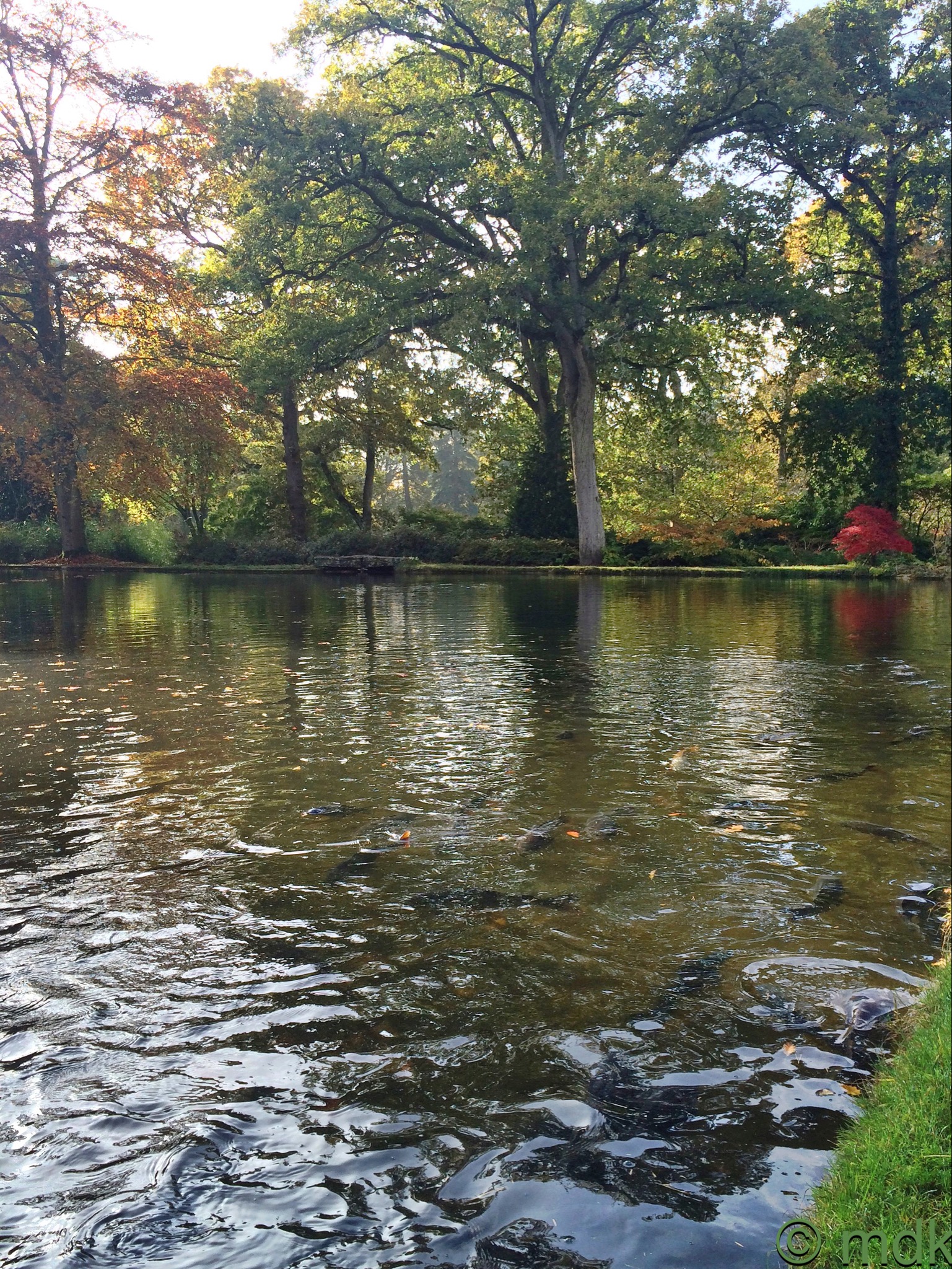 We crossed the pretty wooden Japanese Bridge and slowly circled the pond, drinking in the colours. The sun made all the difference, highlighting the golds, coppers and reds along with layers of green in every shade from acid to deep khaki and shimmering in squiggles of blue on the surface of the water. Monet  himself couldn’t have done a better job than Mother Nature. The reflection in the pond certainly had an impressionist quality about it, short brush strokes, soft edges daubs of green amongst the red, blue amid the green. 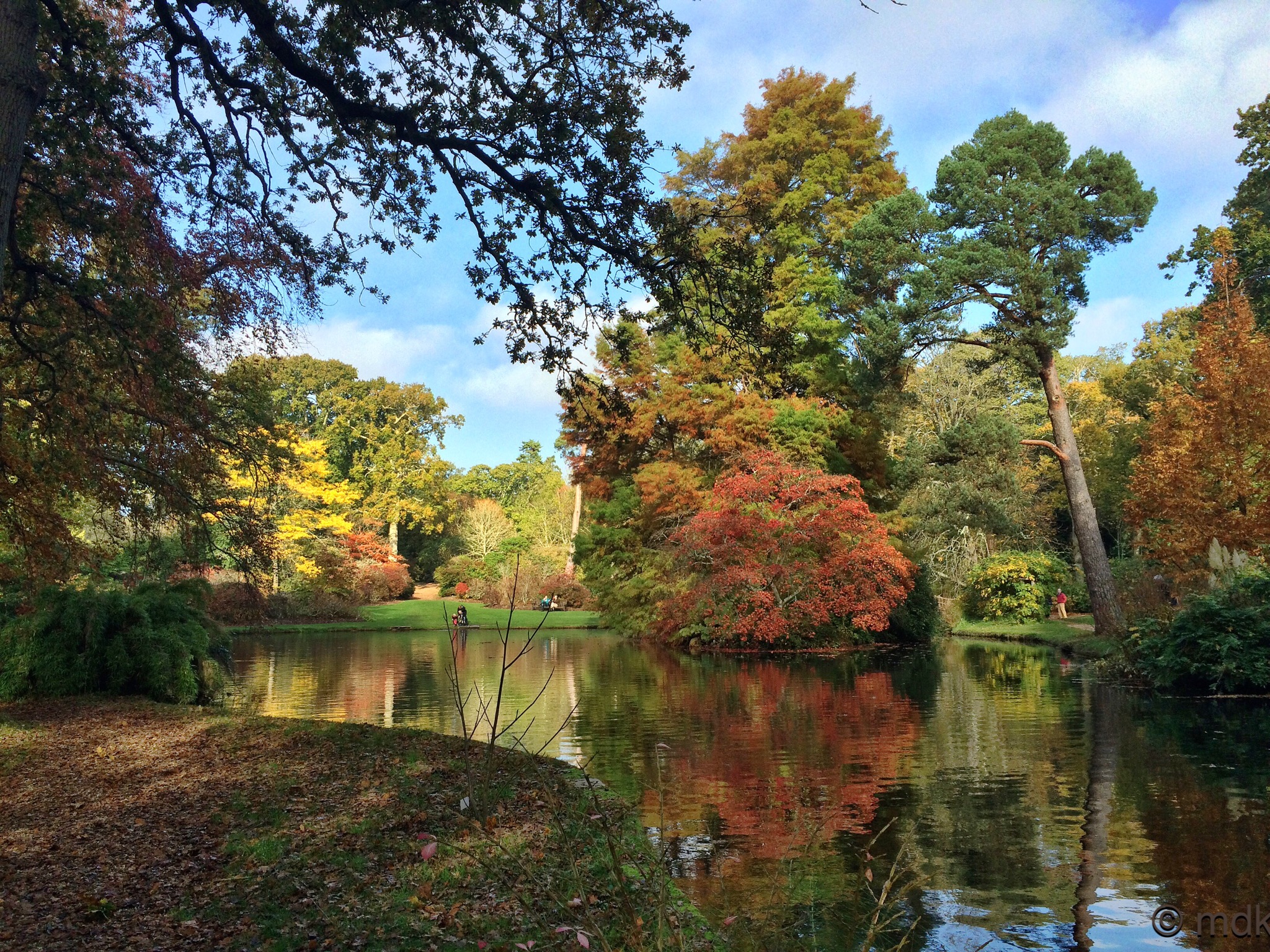 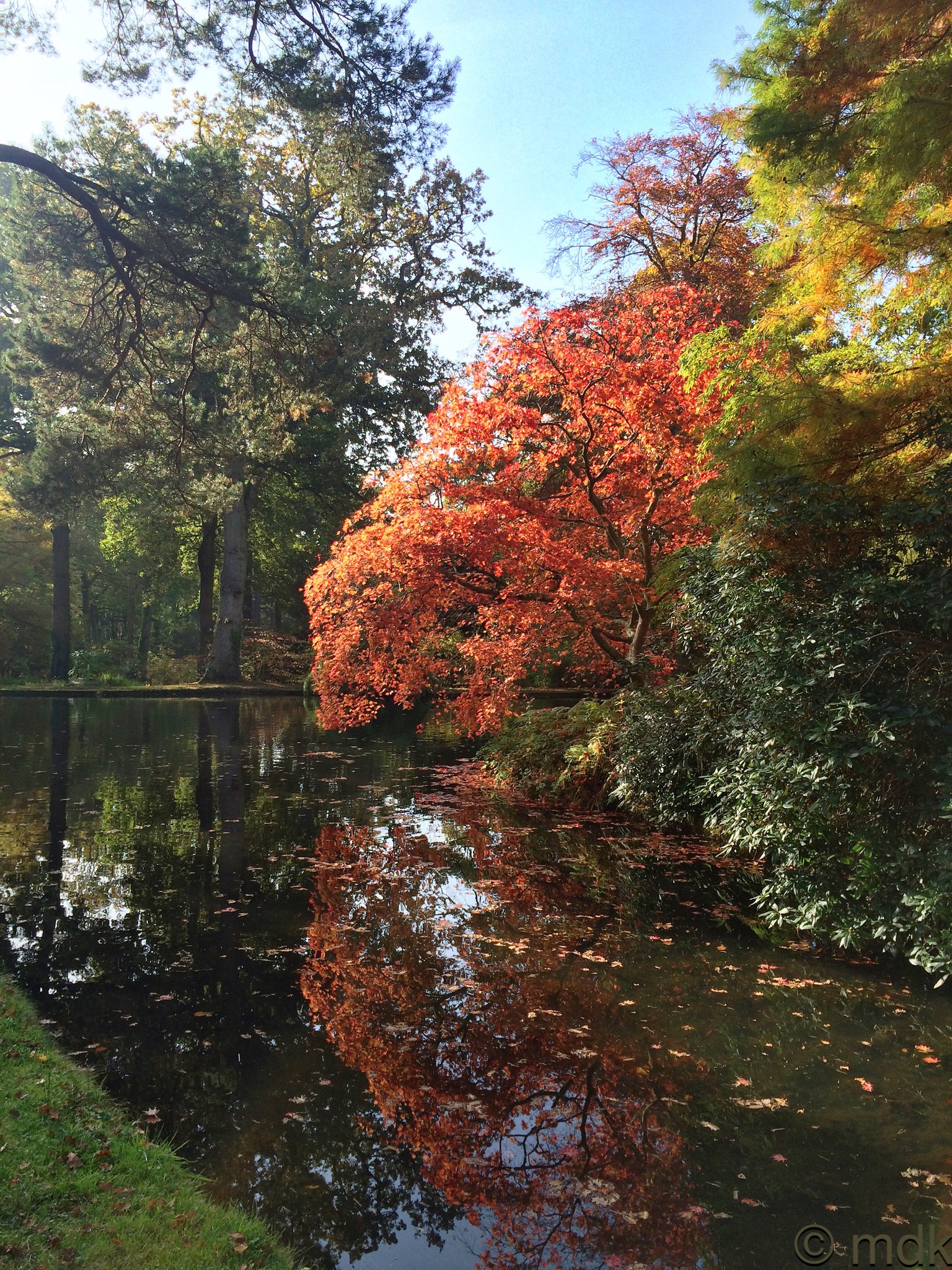 Tempting as it was to sit on one of the benches and stare at the pond, Commando had other plans so we set off along a soft trail of fallen leaves to wherever it was he was heading. Amongst the leaves at the base of a tree trunk I noticed an unusual fungi I’ve only ever seen once before. It was at the foot of a tree then too, but near Freemantle Common in the village. Sparassis, otherwise know as cauliflower or brain fungus, look, at first glance, a little like a cauliflower or a sea sponge but, on closer inspection they’re made up of ruffles of waxy looking creamy white. They grow as parasites or saprobes on the roots or bases of hardwoods, especially oak, fir, pine and spruce and can reach more than half a meter in height. This one was about the size of a large cabbage. They are edible and  have been found to contain chemicals that may stimulate the immune system and have anti-tumor properties. For this reason they are cultivated in Korea, Japan, Australia and the USA so they may be coming to a supermarket near you soon. 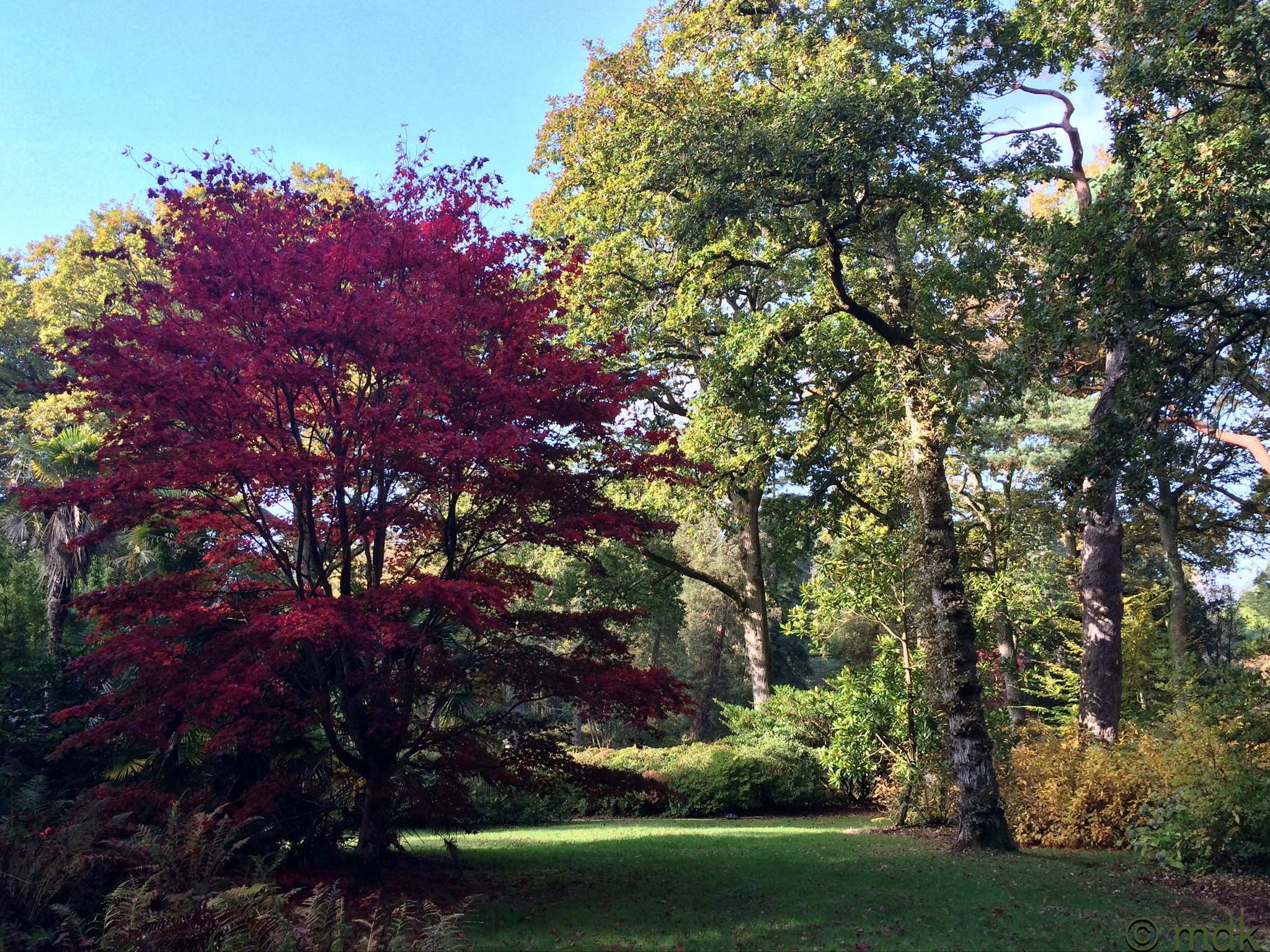 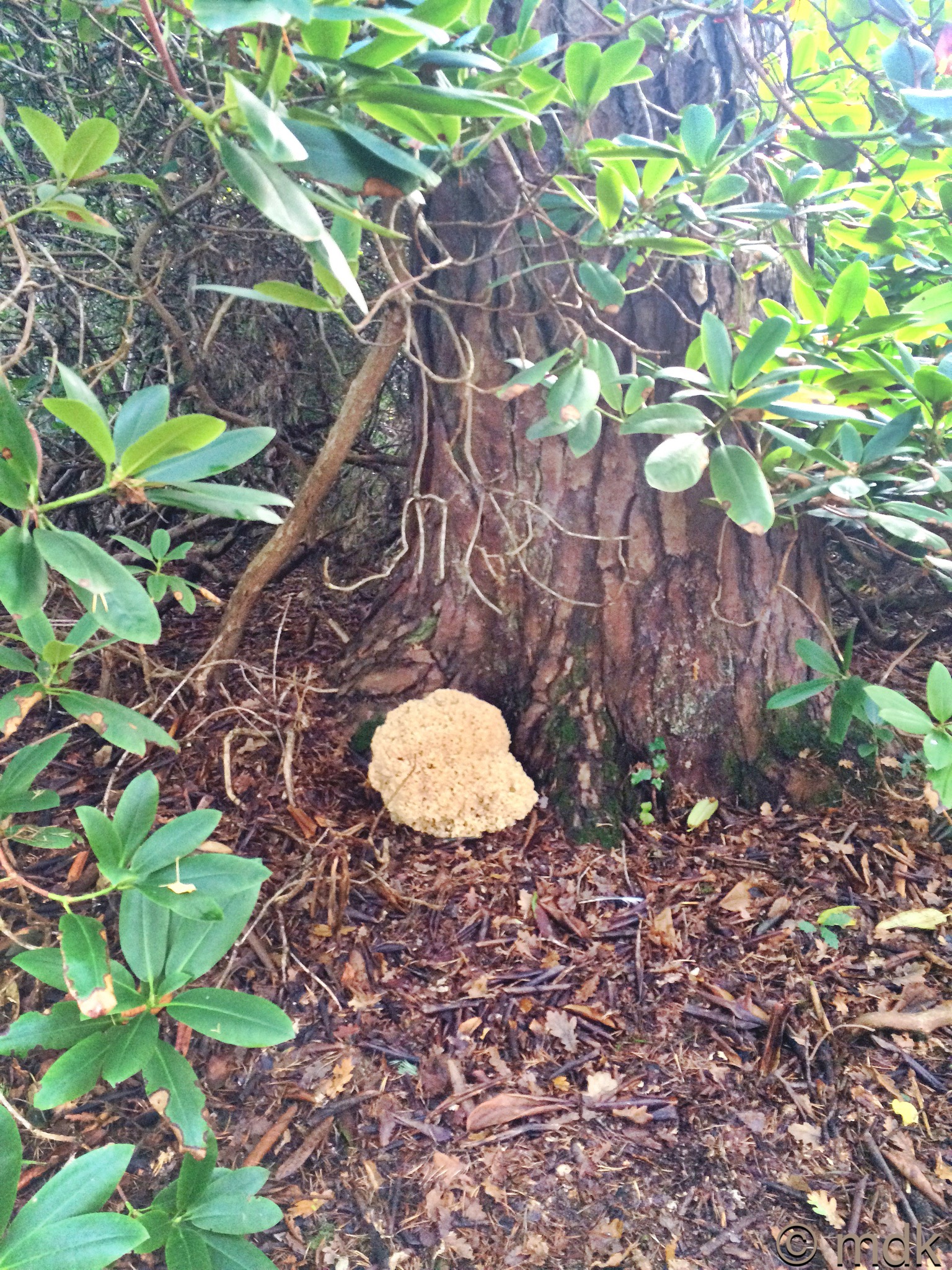 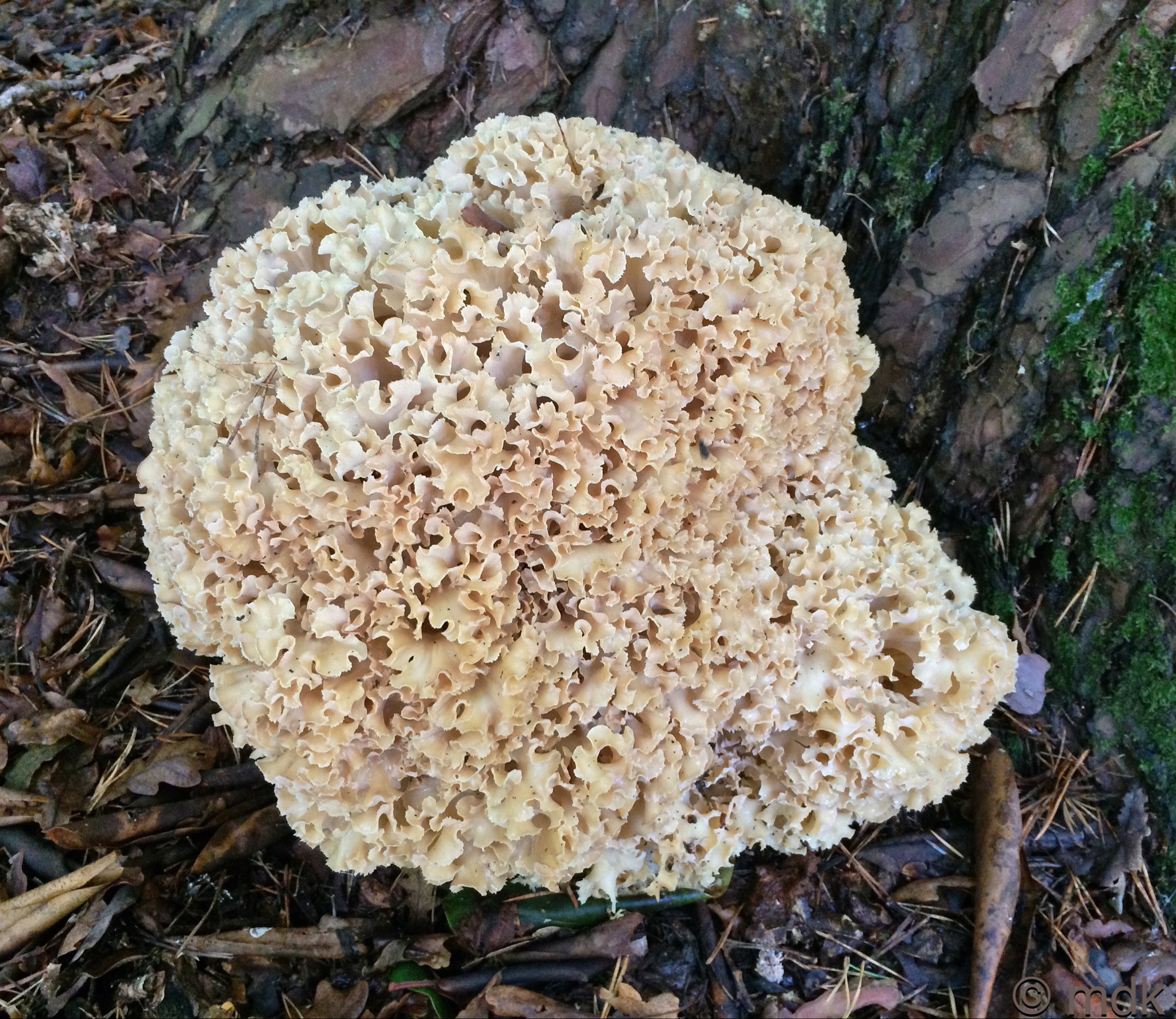 Pretty soon we came upon another vein of hydrangeas, these less faded than the last. The pale blue, pink, purple and faded magenta blooms were beautiful but overshadowed by a vibrant red maple. It seemed that the last gasp of October would be the brightest. 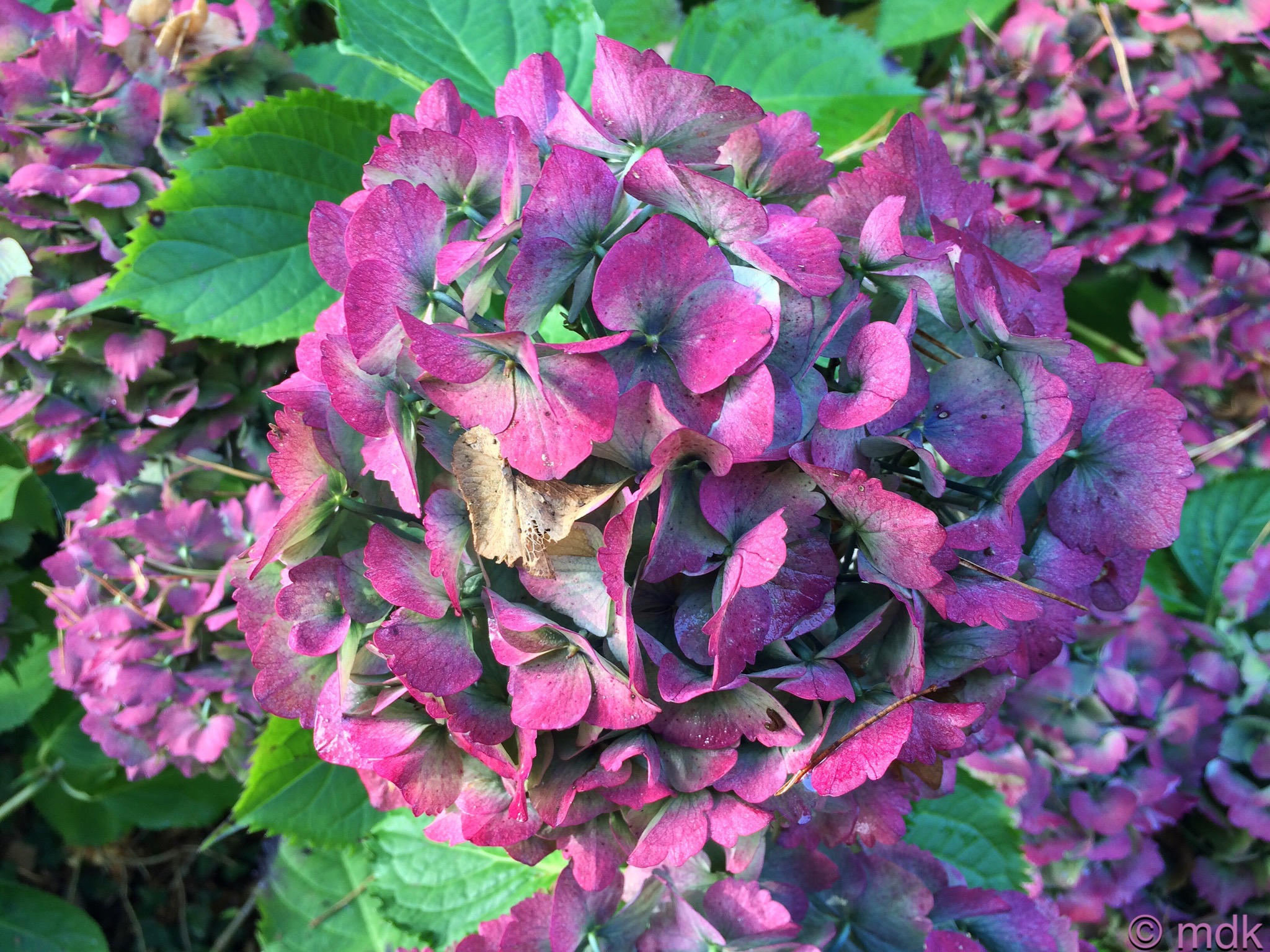 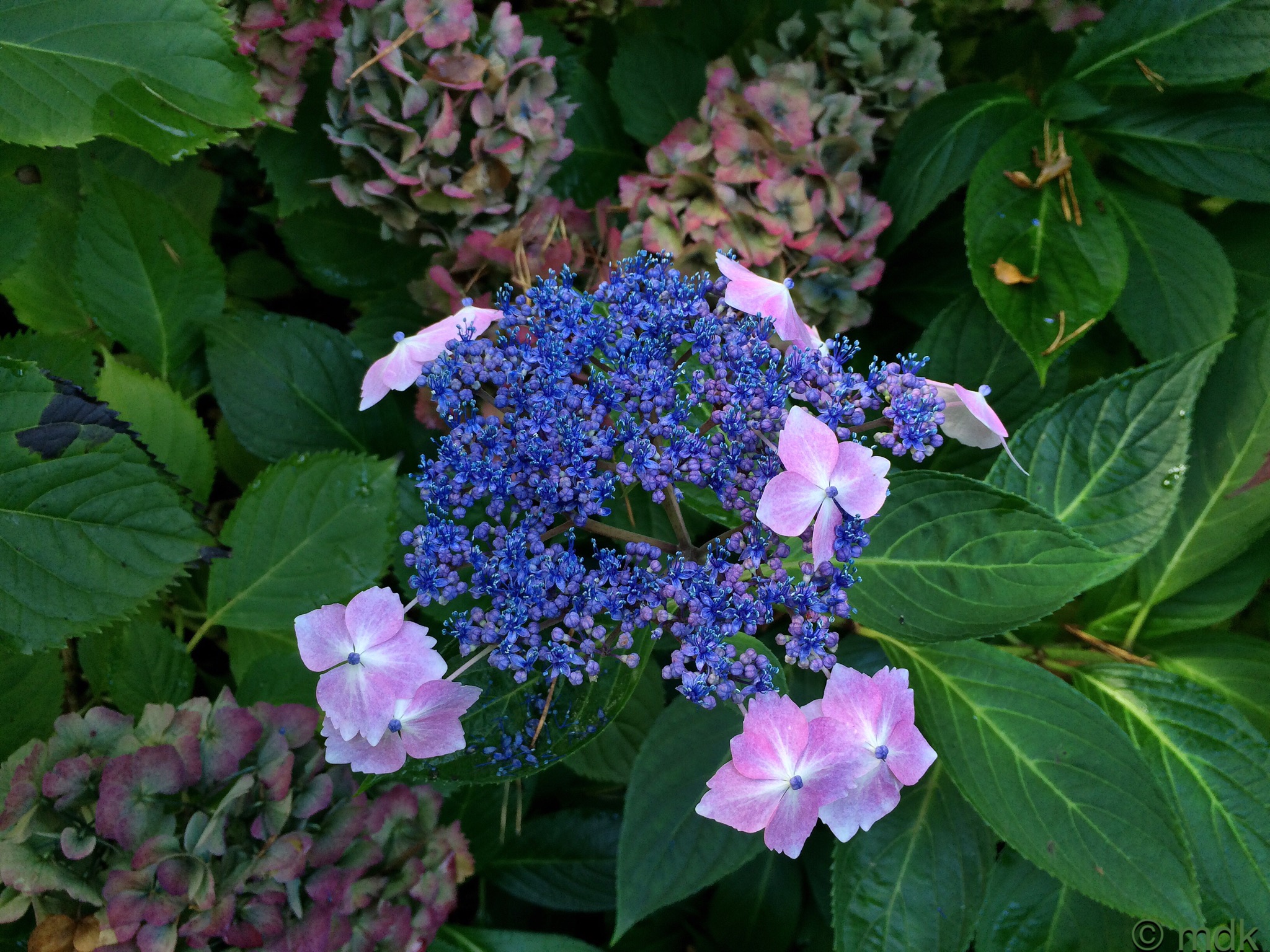 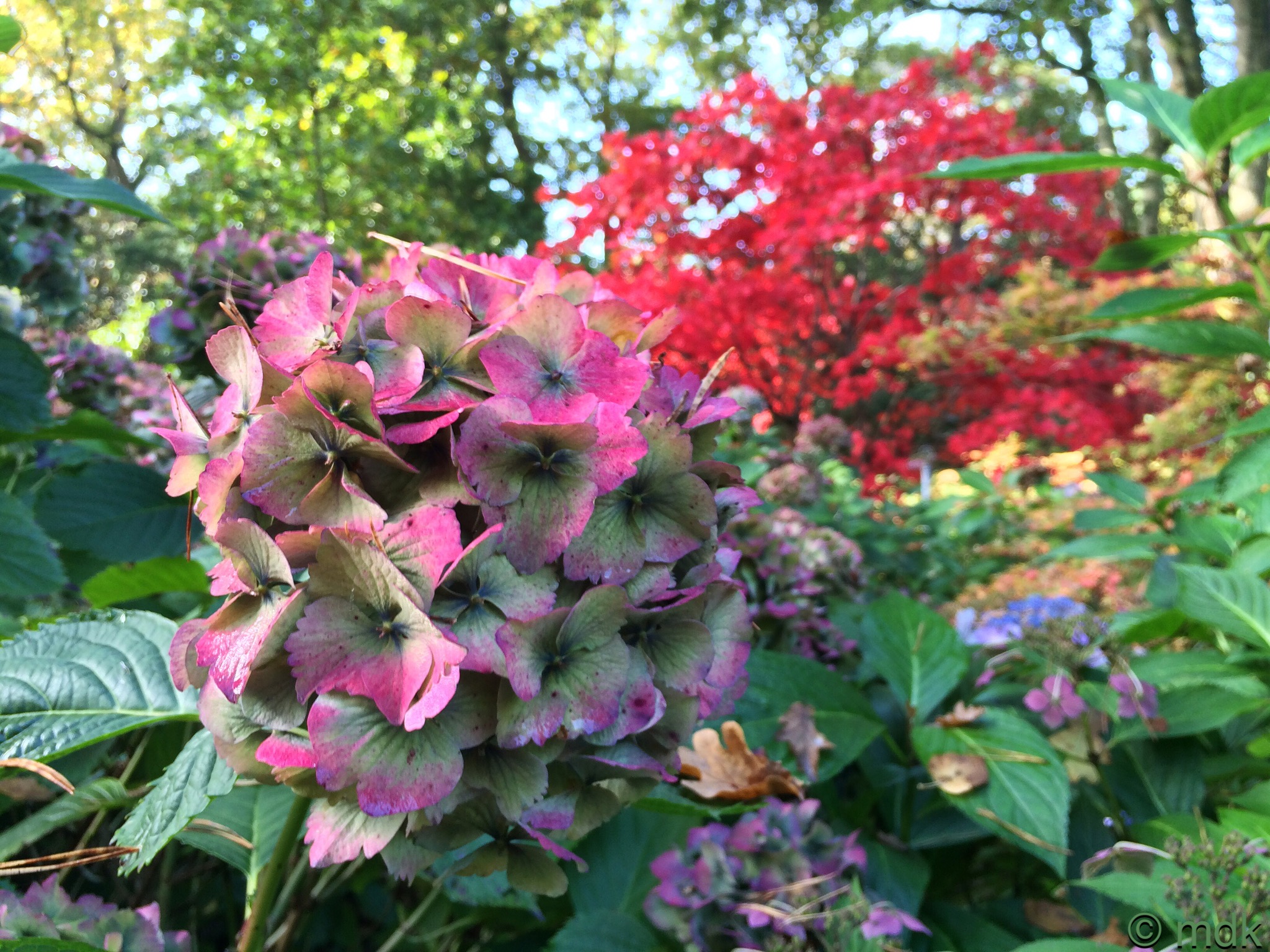 14 thoughts on “The not so secret garden”