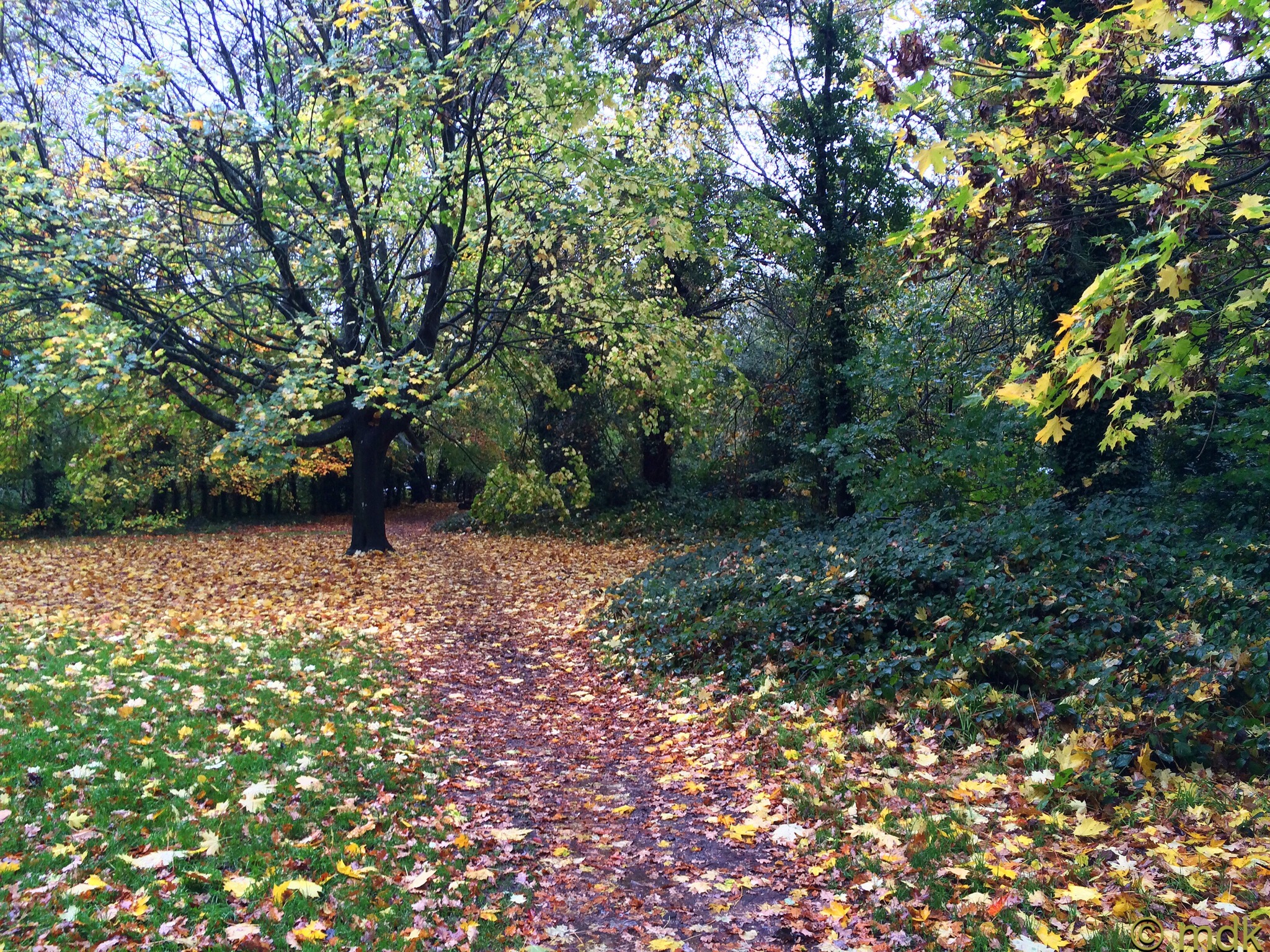 After my first, unsuccessful, hunt for black cygnets I was determined to go out every single morning and trawl the riverbank until I found them. Unfortunately this didn’t happen. The rain that began as my walk ended continued unrelenting over the next week. Once or twice I got my boots and coat on but was beaten back at the door. There was some struggling up the hill to the shops getting soaked and some driving up the hill to avoid getting soaked. On Saturday I foolishly went with Commando to watch the Parkrun. The Common was all giant puddles and soggy leaves and I somehow got volunteered as a marshal. Wet and cold don’t even cover it. 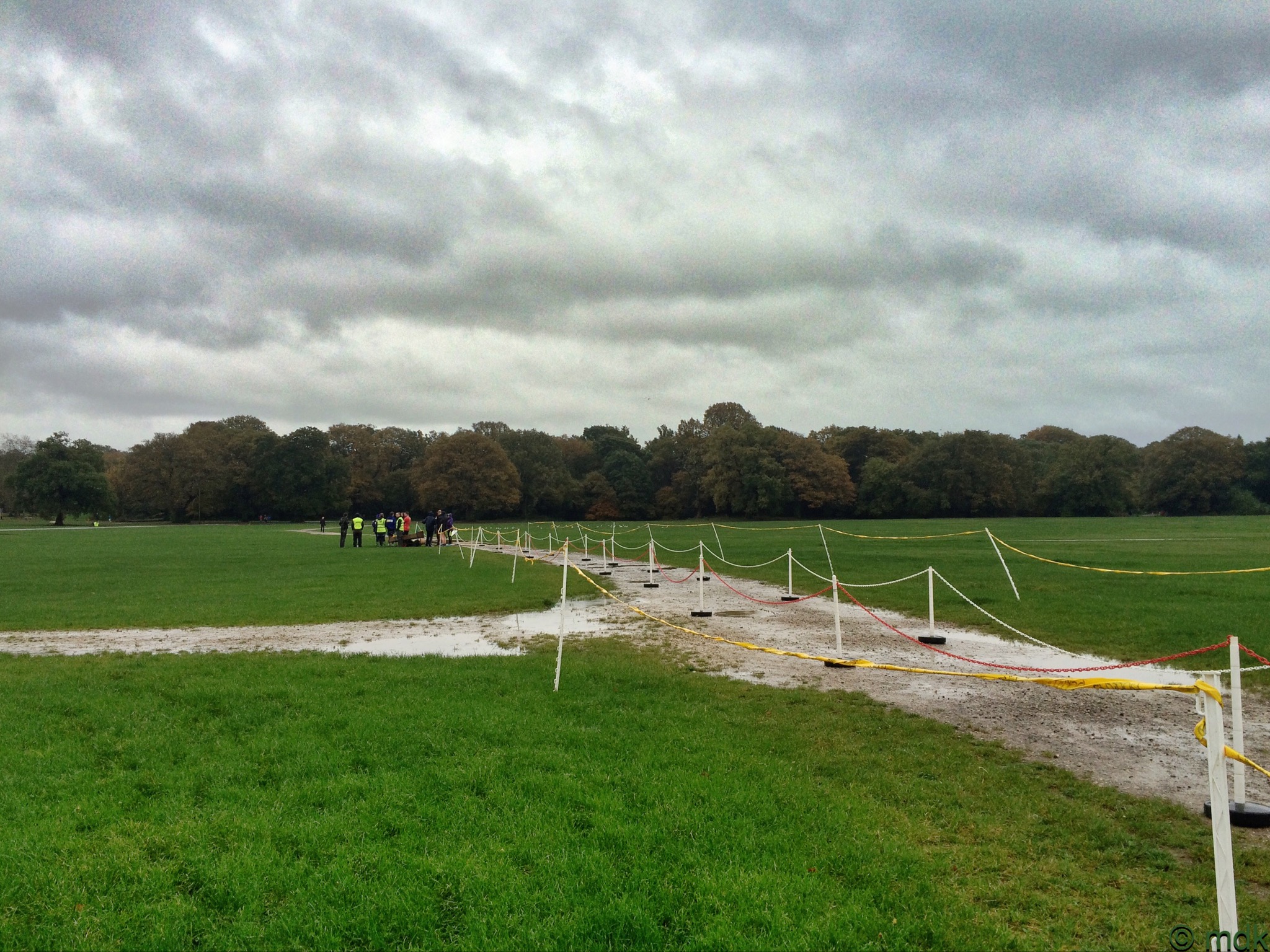 When Remembrance Day came around though I knew I’d be going out whatever the weather chose to do. Despite the fact it was drizzling when we set out in the car, and my warning of a longish walk ahead, CJ decided to come along too. By the time we got to Weston Shore the rain had actually stopped, although the sky told of more to come. The wind was howling around our ears as we set off behind Abbey Hill on the trail along the shore. We put our heads down and pushed through it. 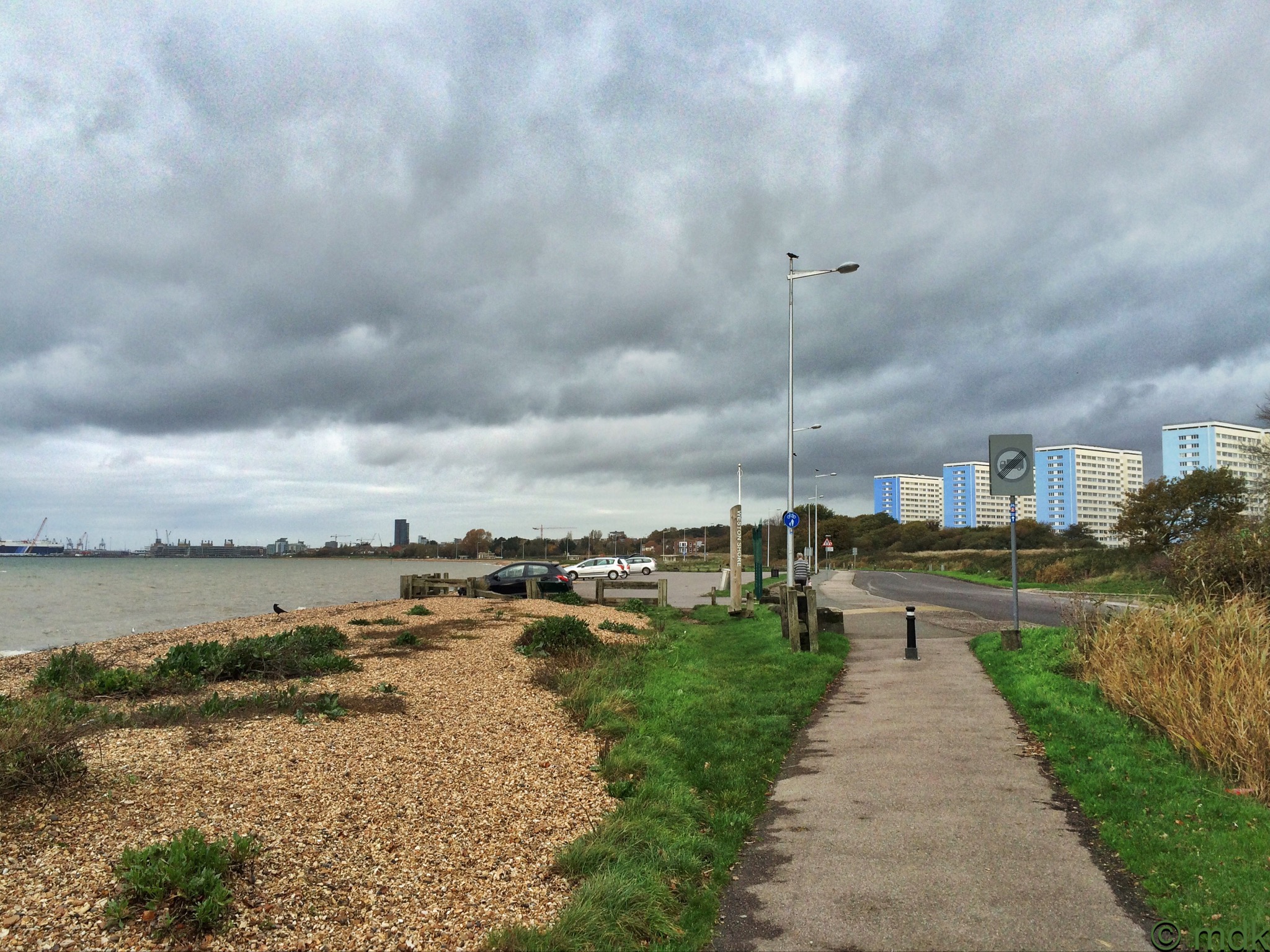 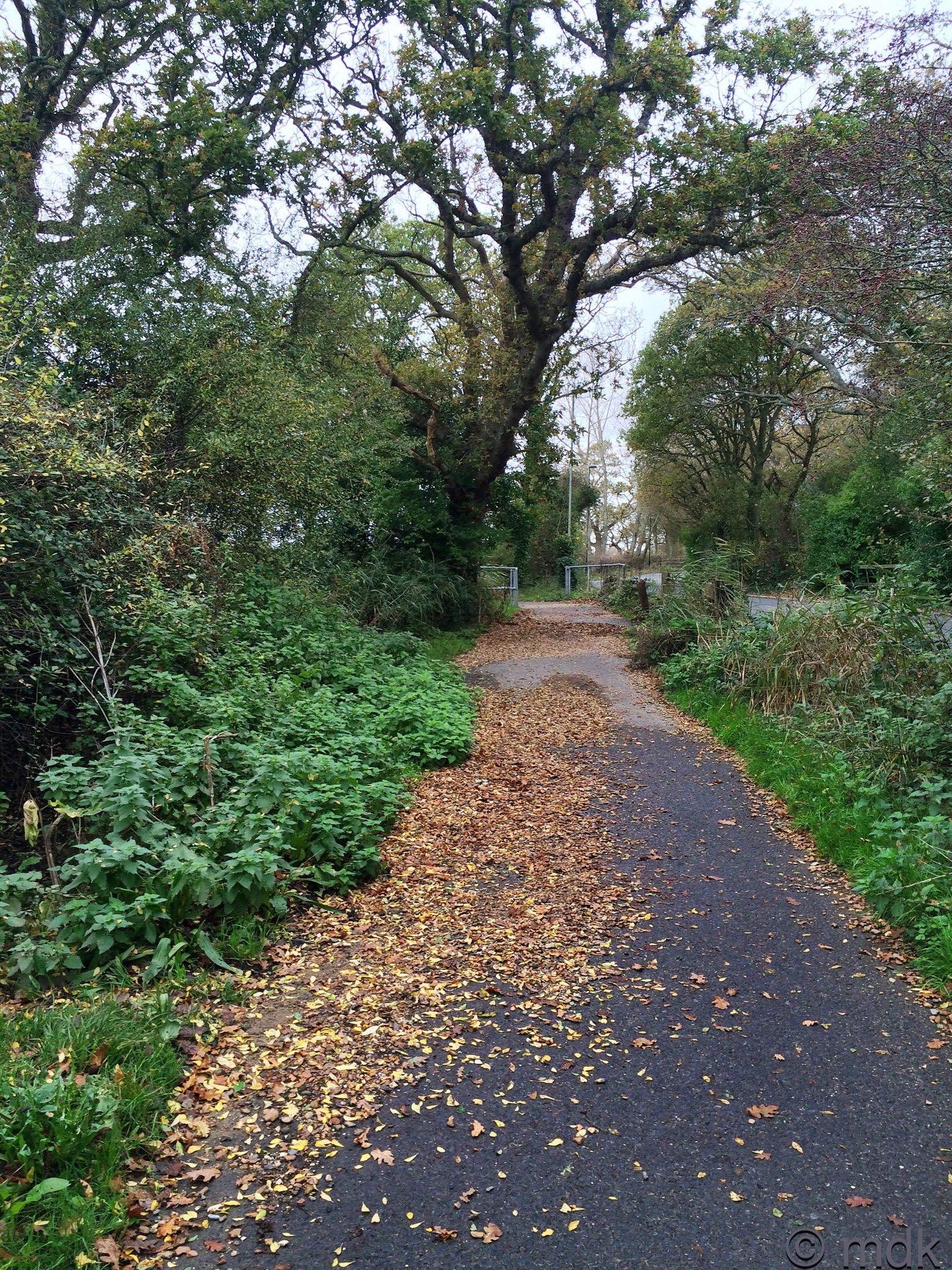 Further along, by the crumbling stone wall near Netley, the sun did make a brief half appearance, trying hard to push through the thick cloud. It never came to anything though and the sea battered at the path, sending up salty spray as we passed by. The rain was still holding off but we were getting wet anyway. 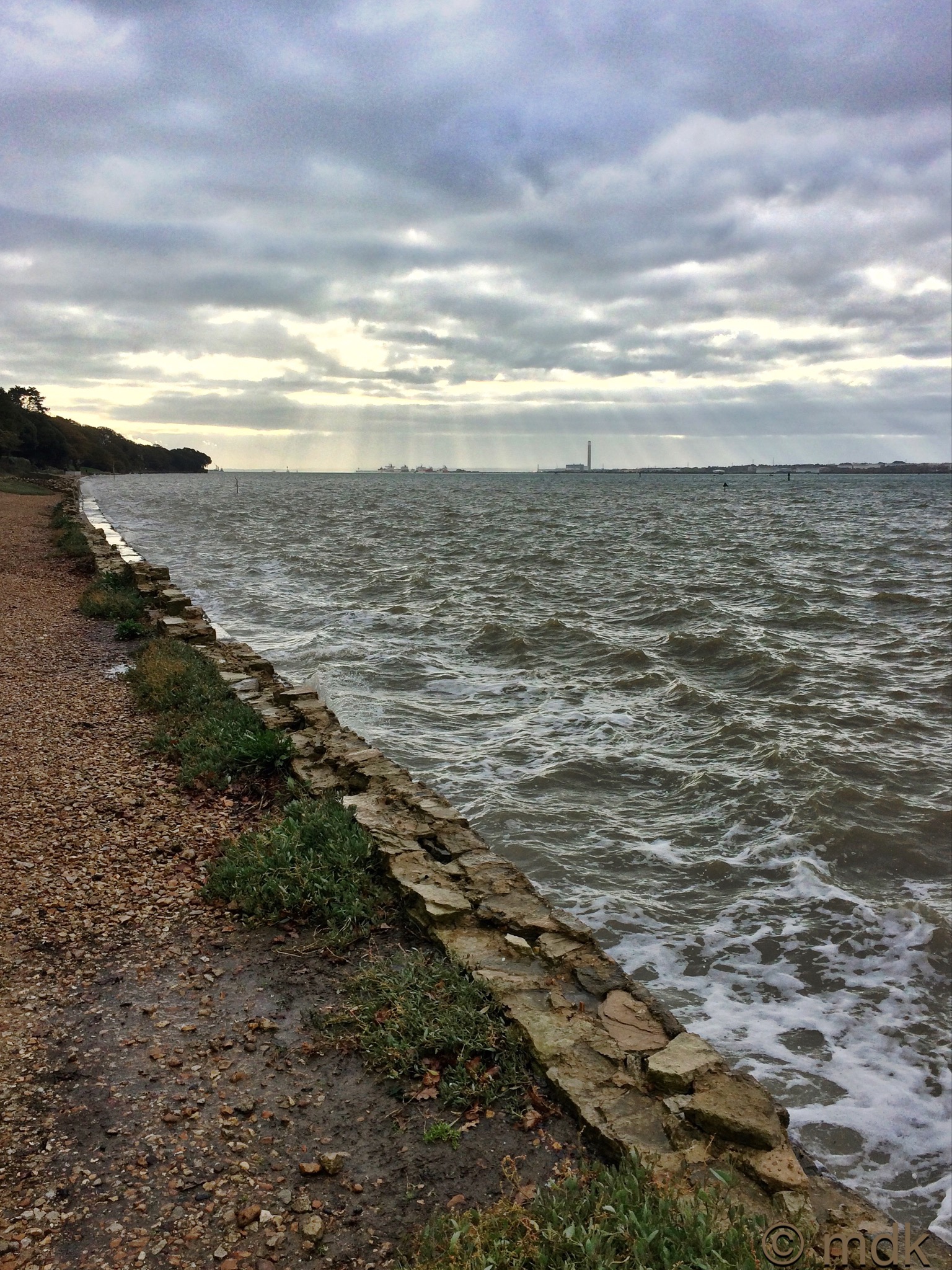 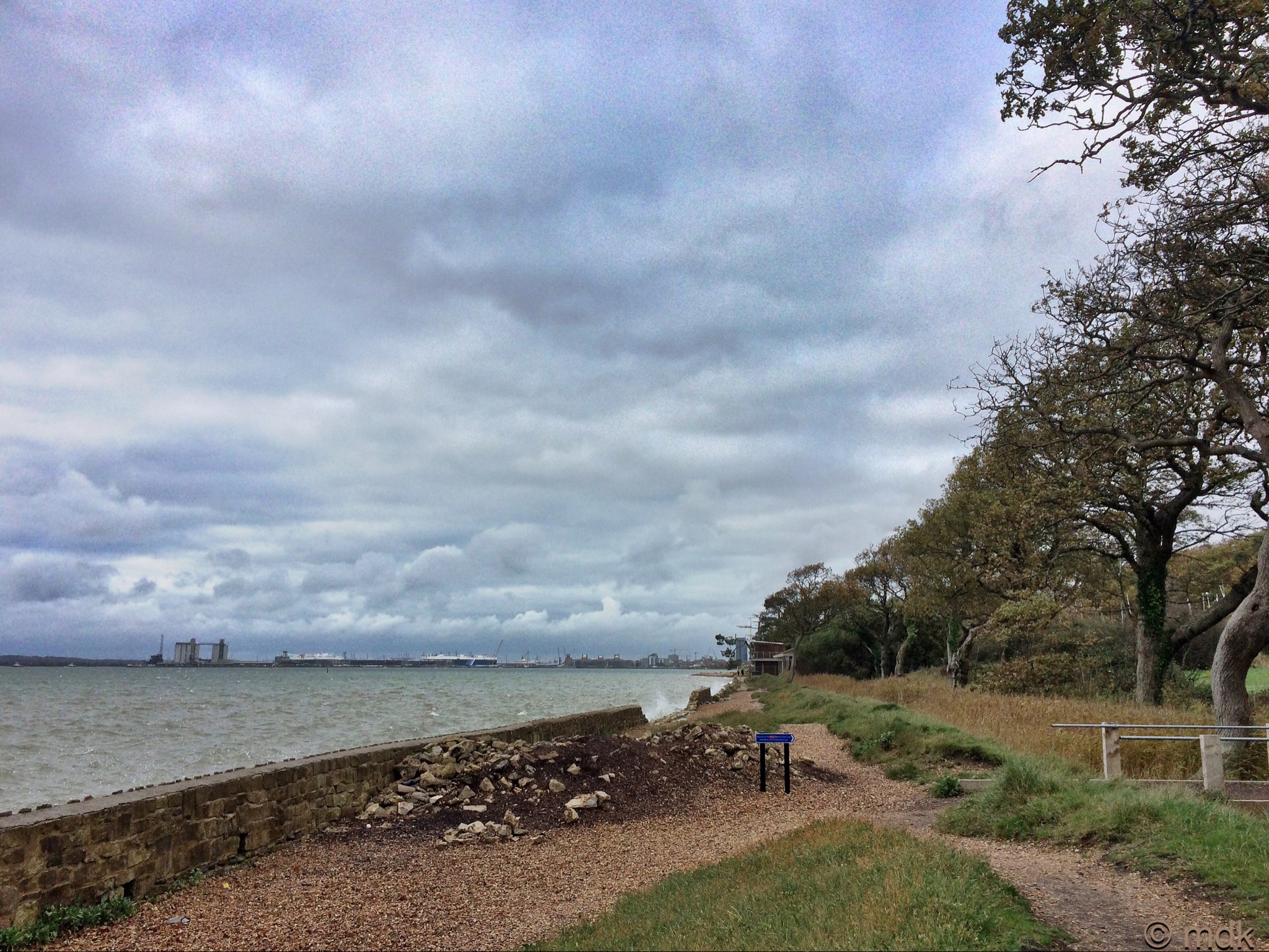 Time was of the essence if we wanted to be at the Military Cemetery by eleven so we pushed on. We did stop briefly to take a picture of the boat at the gates to the Royal Victoria Country Park, although the flowers inside were past their best. The weather was well past its best too and we struggled against a ferocious wind towards the centre of the park. 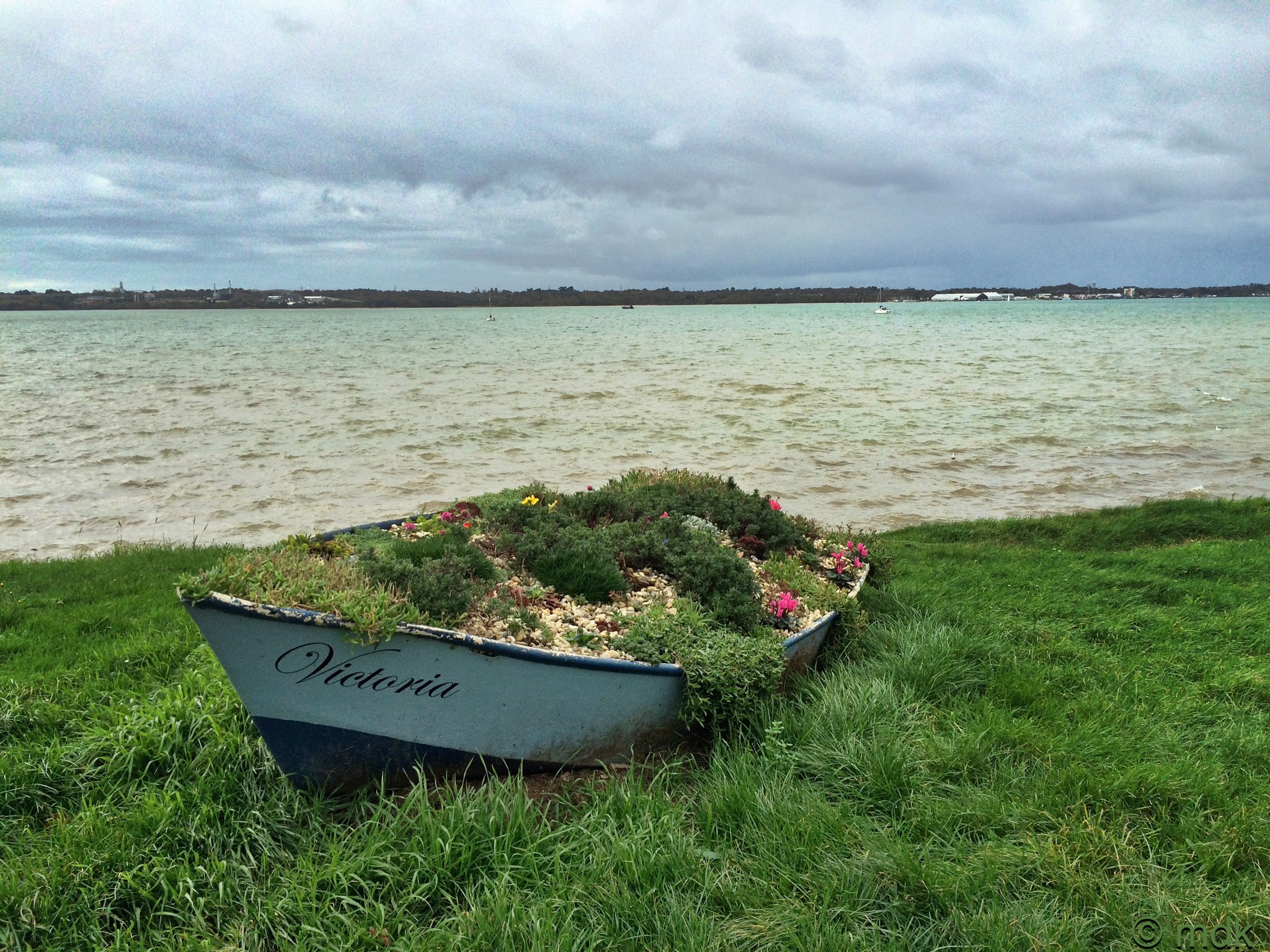 The blustery conditions did at least have the advantage of forcing us to keep moving rather than stopping every few minutes for photos and we’d made good time. With no need to hurry we stopped to admire the chapel, the only surviving part of The Royal Victoria Hospital, and the beautiful poppy sculpture in front of it. We had our own poppies fastened securely to our coats but they were looking a little the worse for wear. Beneath the sculpture one or two real poppies were still bravely hanging on. 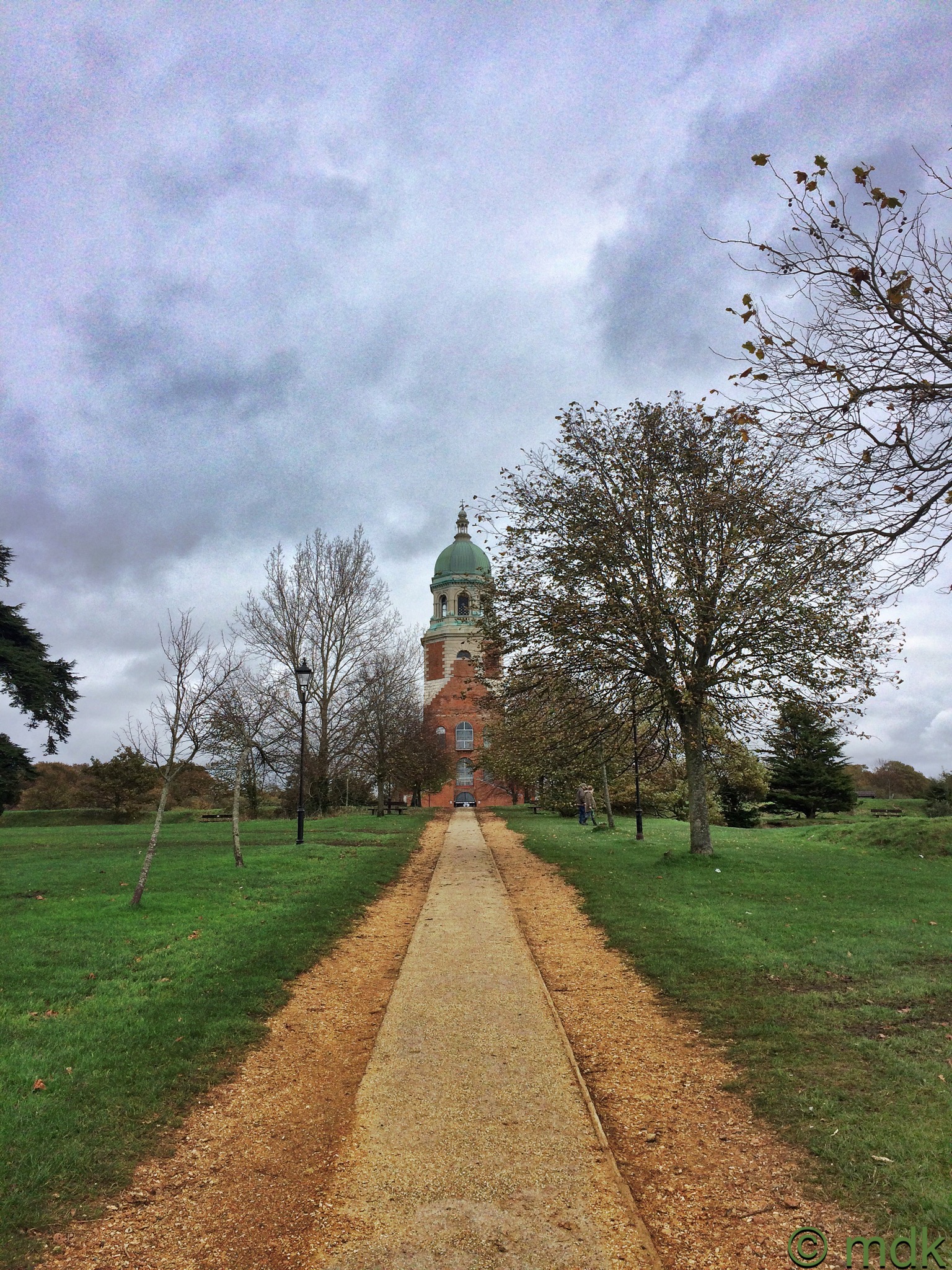 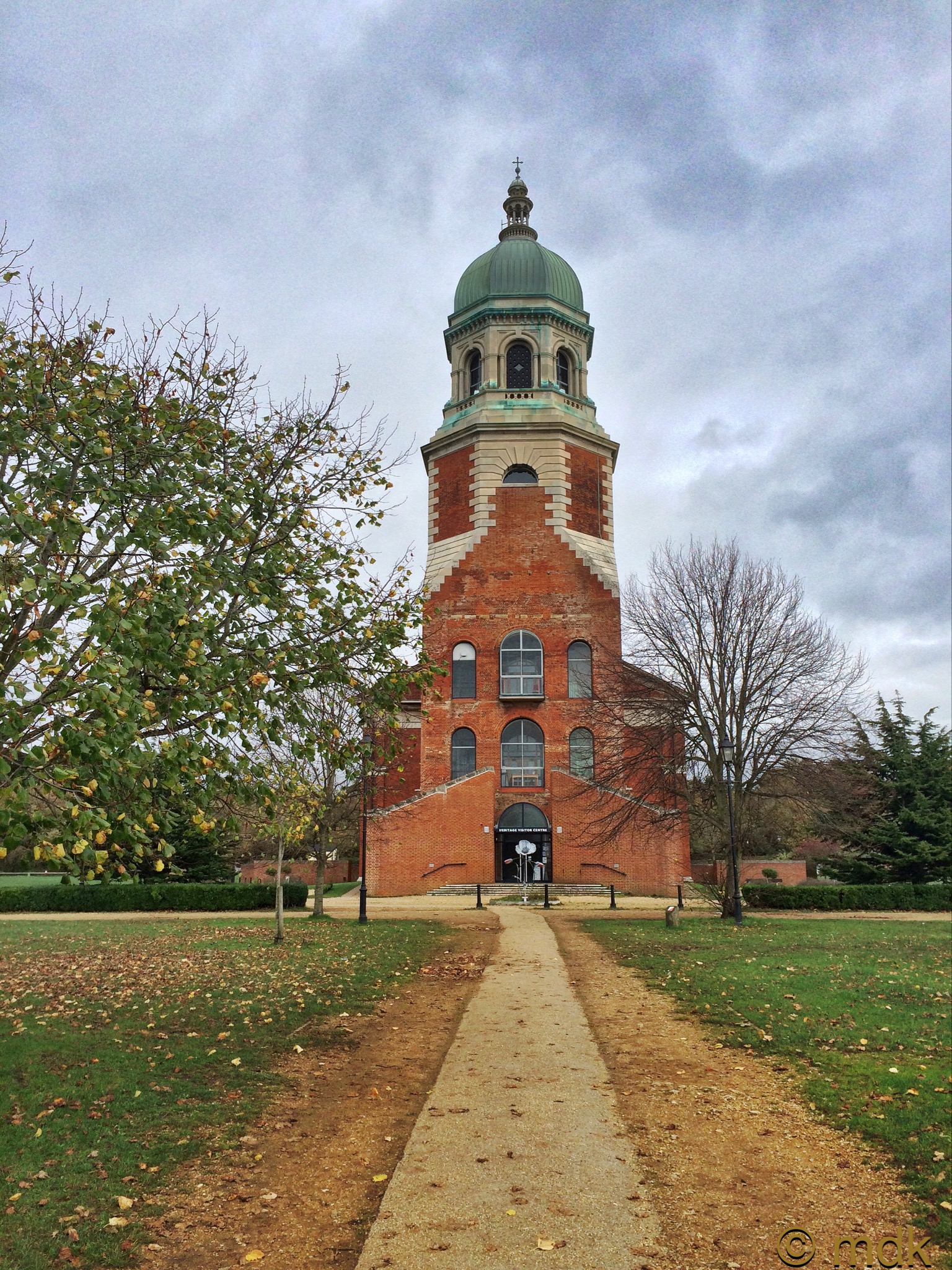 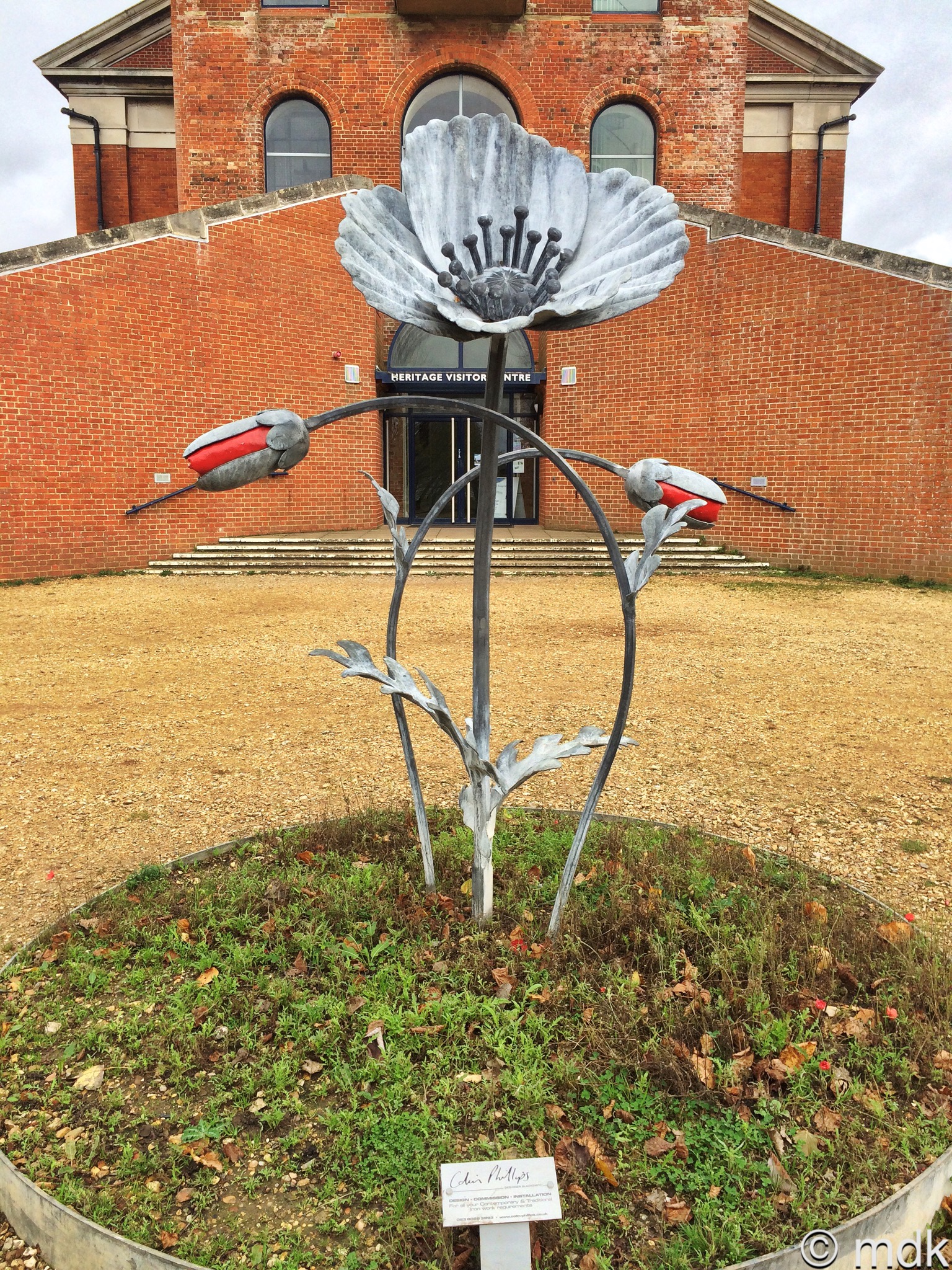 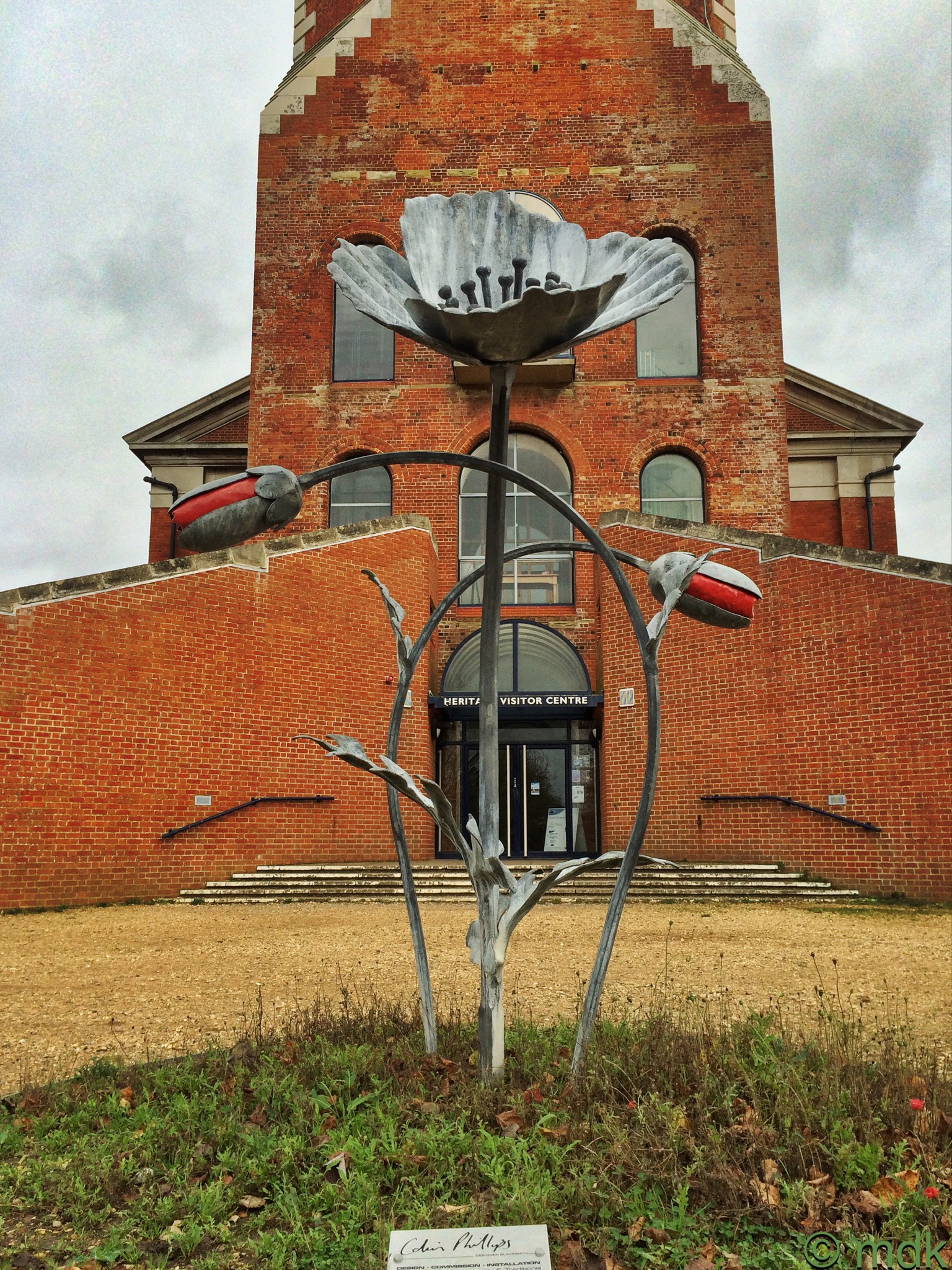 The hospital opened in 1863 and was used to treat injured servicemen during the Sectond Boer War and both world wars. It’s likely that Pappy was taken there after he was shot during World War I and could be the reason his family relocated to Southampton. Even so, it was an exercise in form over function, a beautiful building that was totally impractical for use as a hospital and ridiculously expensive to run. Due, in part, to the high cost of maintenance, the hospital eventually fell into disuse and the main site was closed in 1958. Five years later a fire badly damaged the old building and it was eventually demolished in 1966. Originally the chapel was also going to be torn down but it was given a last minute reprieve and saved as a monument to the hospital. Today it acts as a visitor centre. The path along the causeway to the cemetery was a touch muddy in places but at least we were out of the wind in the shelter of the trees. When we came to the place where the tree was snapped in two by the gales a few years back it was still there, the trunk leaning against the body of the tree. A little further, on the other side of the path, was the skeletal remains of another fallen tree from the same storm. 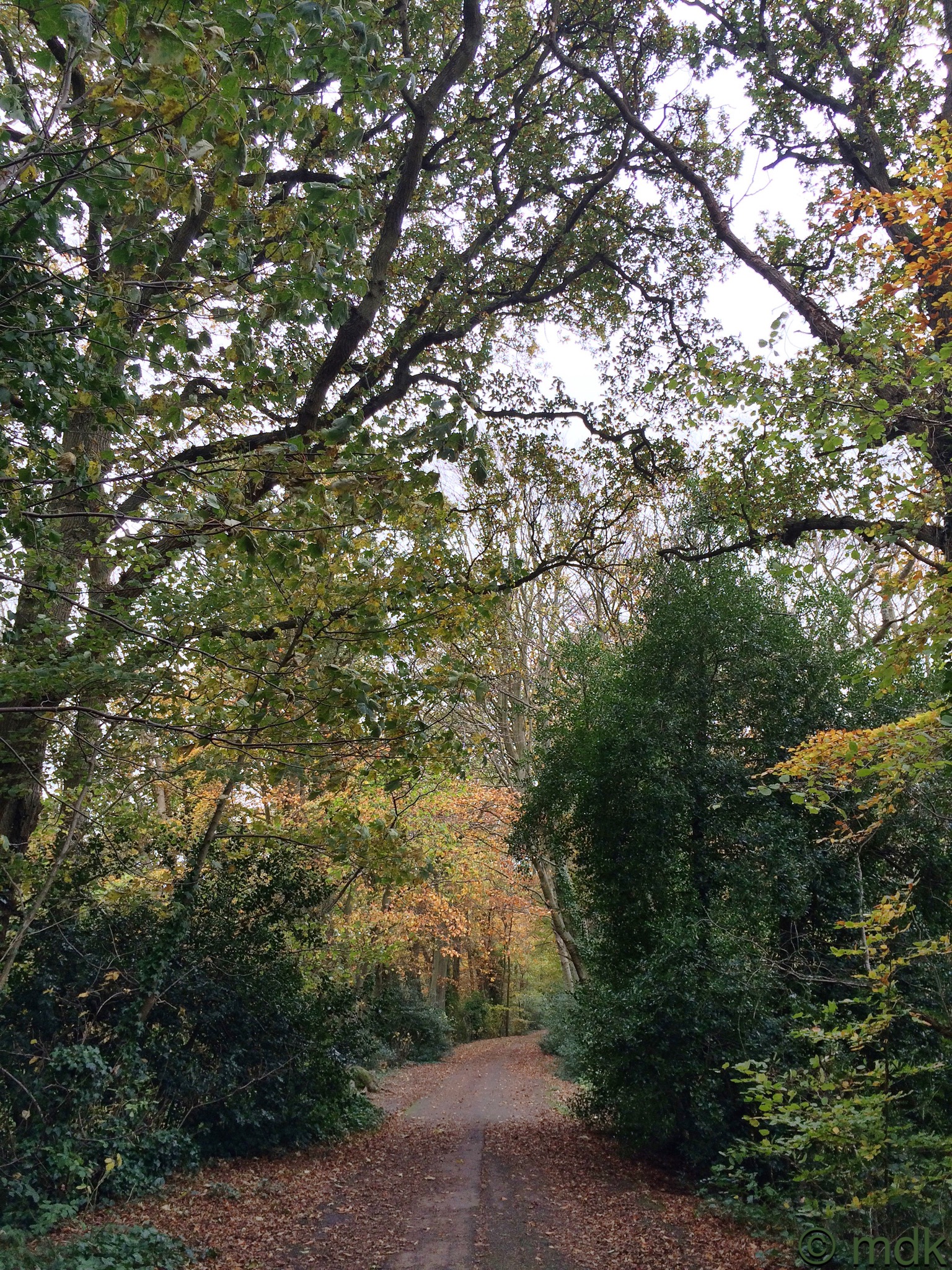 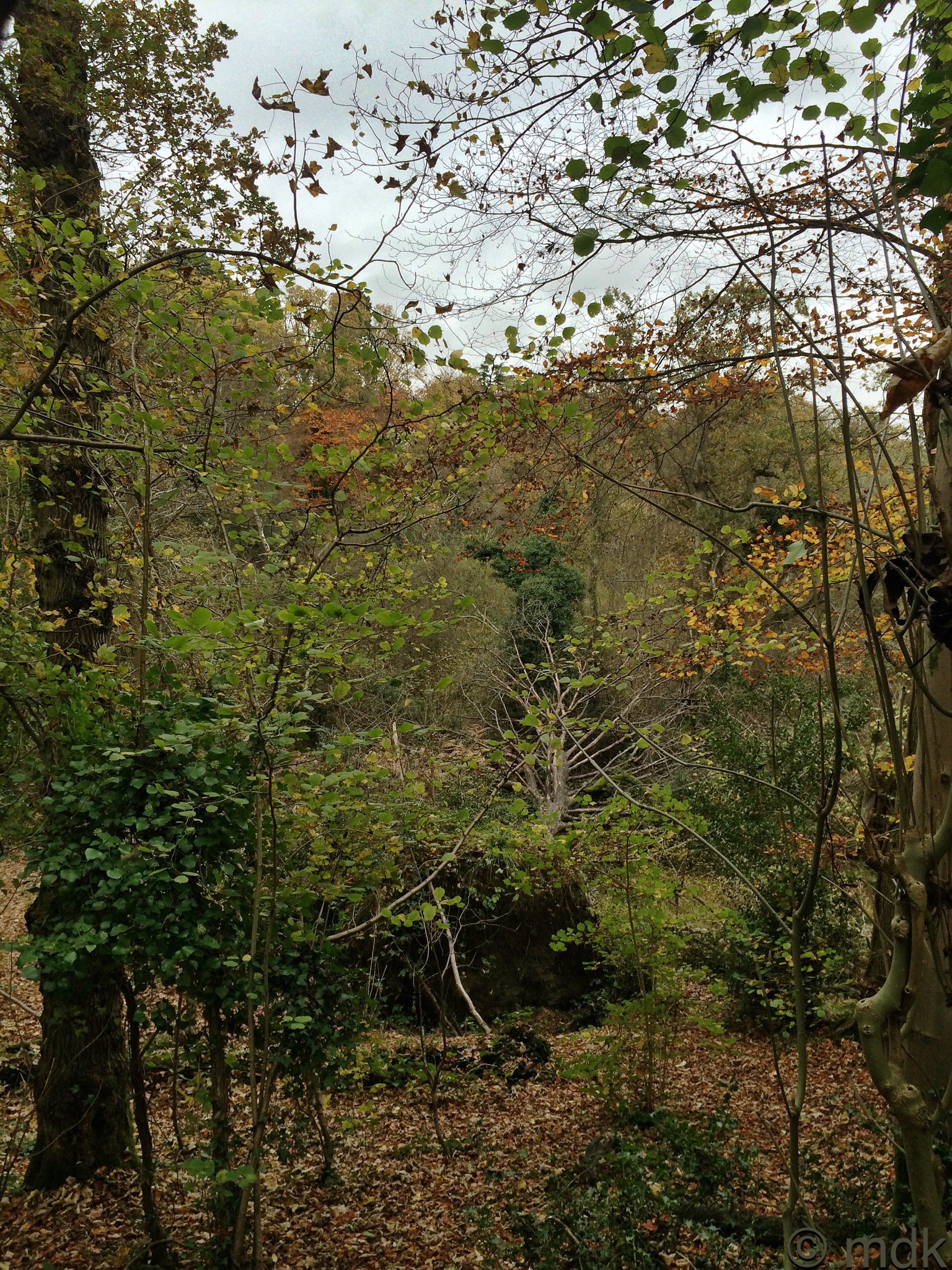 When we rounded the final bend there was an old soldier up ahead walking slowly towards the cemetery. We didn’t want to intrude on his solitude so we hung back. At the gates we stood for a moment looking at the first of the graves, rows and rows of white stones on the little hillside beneath the trees. The cemetery was used for the burials of those who died in the hospital during both world wars, although the vast majority of the graves are from World War I. When we came in sight of the small cenotaph we could see the old soldier in his smart black coat and fedora hat bend his head to read the cards on the poppy wreaths. There were fifteen minutes or more before eleven o’clock so we wandered off to look at some of the graves. Slowly we walked up and down the lines, glancing at each before passing to the next.
“Almost all of them are younger than me,” CJ remarked.
“I know,” I said. “It was a terrible waste of young lives.” 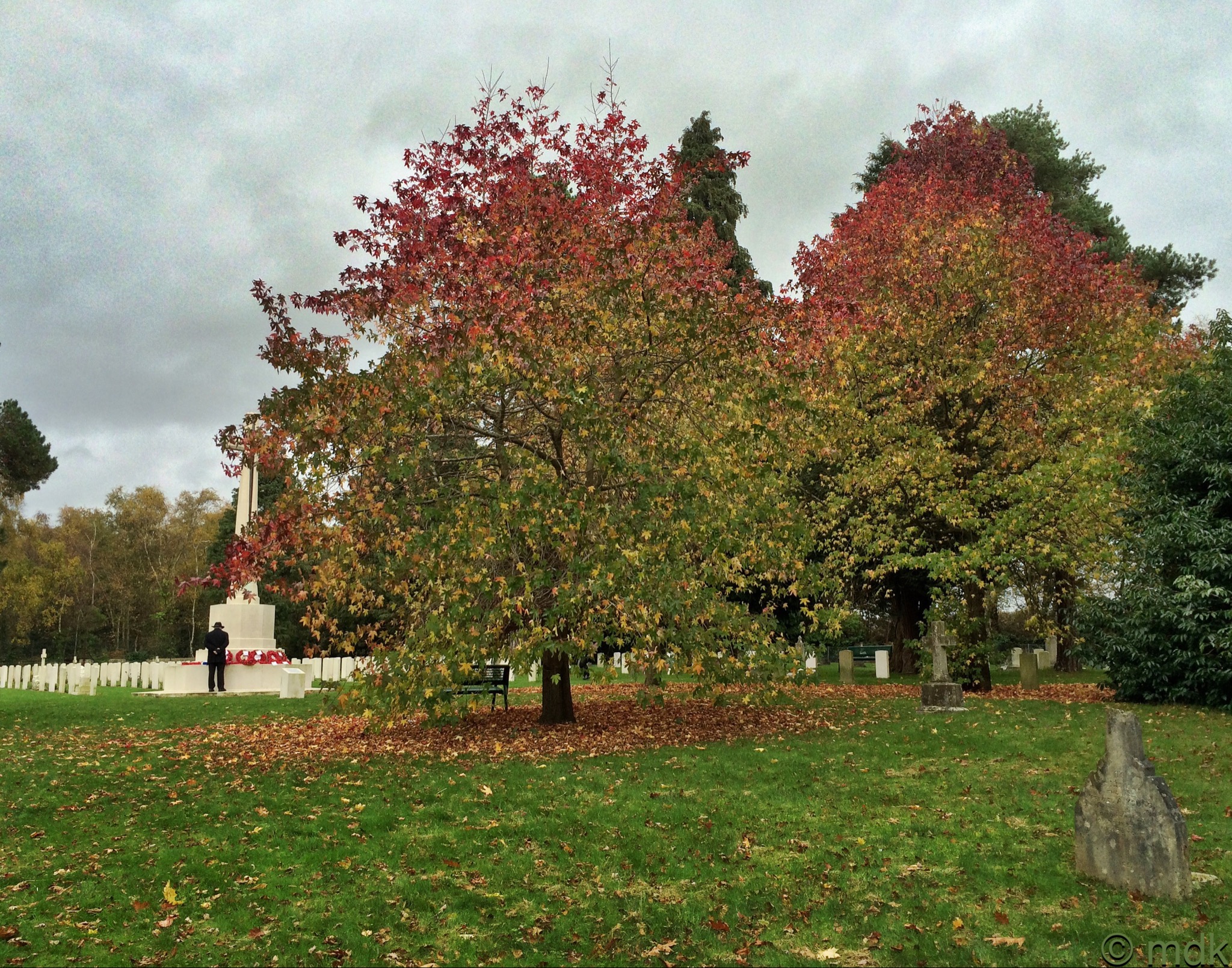 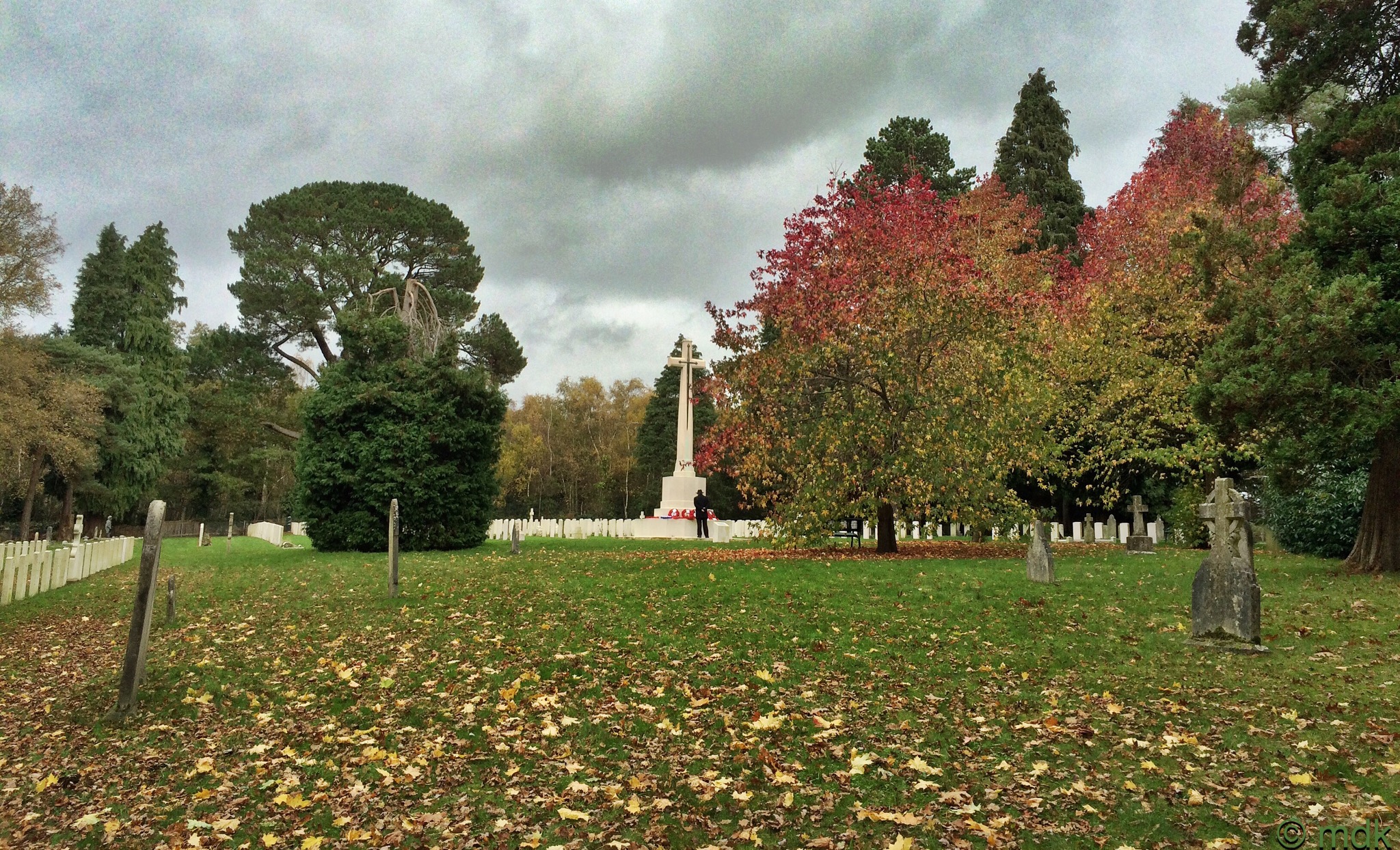 Every gravestone tells a story, even if the only words are unknown soldier, but some stand out, they have a story begging to be told. In the middle of all the plain white slabs one stone was different. It was slightly smaller and the top had a decorative curve but it was the inscription that captured my imagination. As I got out my phone to take a picture, I noticed CJ doing the same, it obviously spoke to him to. The grave belonged to Sapper F Erwood, who died in 1915 aged just twenty one but those were not the words that captured our attention. This grave was far more personal then the rest, dedicated ‘in sweet memory of my dear Freddie,’ and ‘never forgotten by his sweetheart Lucy.’ This was more love story than gravestone. Of course I couldn’t help wondering what had happened to poor Lucy? Did she end up like so many young women after World War I, never getting over her lost sweetheart and ending her days alone? Of course that was something I was never going to find out but later I did learn a little more about dear Freddy. Surprisingly a Google search brought up a fair bit of information. Freddie was Frederick Maurice Erwood of the Royal Engineers, and he lived with his parents George and Julia Erwood at 26 Victoria Road, one of the pretty little pastel coloured cottages facing the shore. His father was a stationary engine driver at Netley Hospital and, before the war, young Freddy was a house painter. Freddy wasn’t killed in action, he died of cerebro-spinal meningitis, a condition very common in the trenches, in January 1915. His is just one story amongst the many but it was nice to find out more. 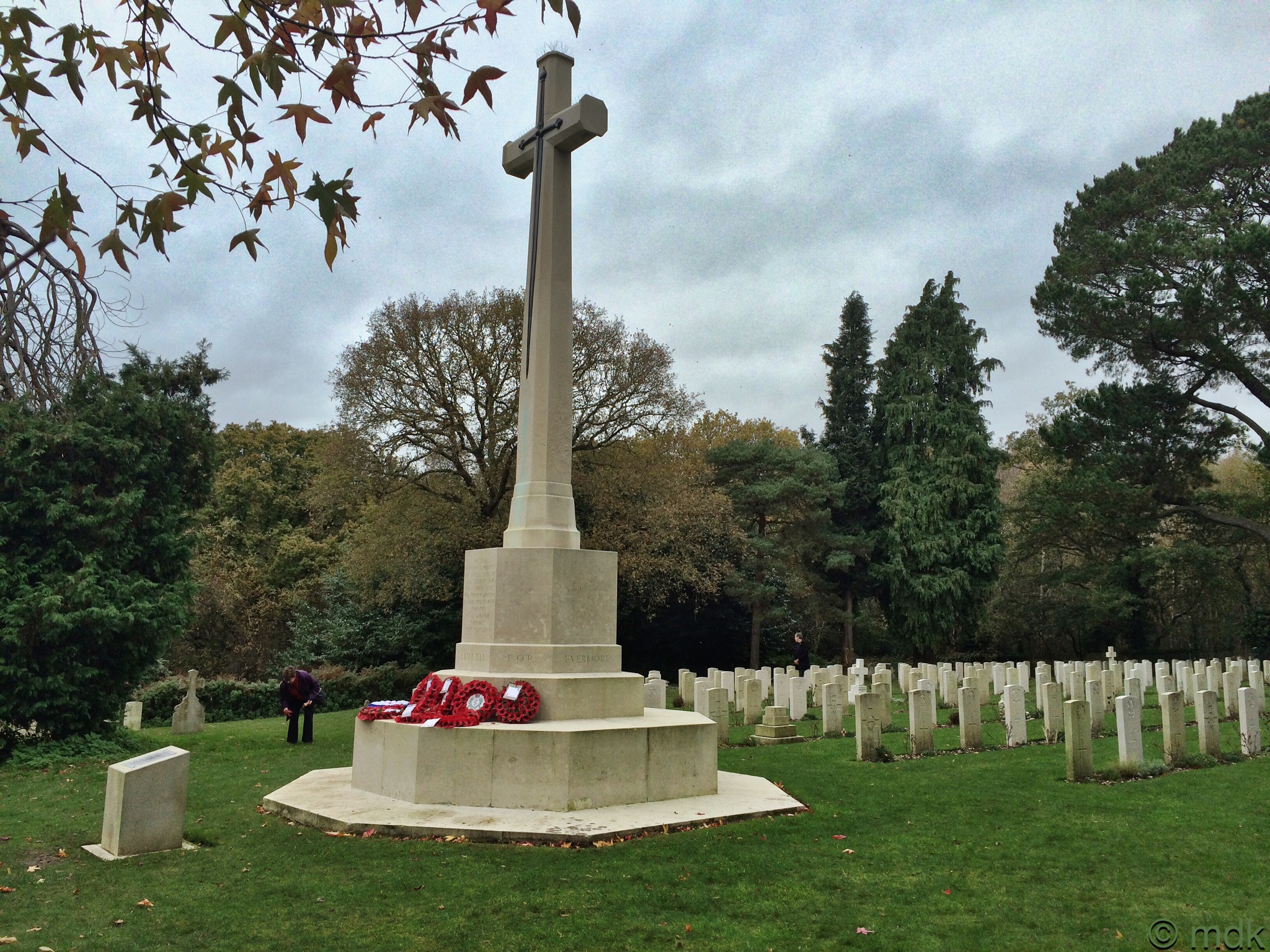 By this time a small group had gathered by the cenotaph. It was almost eleven o’clock so we made our way slowly back. When we got there some loud music started up from the police academy behind the cemetery, CJ and I looked at each other, both wondering if the police trainees knew what day it was, what time it was and just how close they were to the military cemetery. We needn’t have worried though because a few moments later a siren sounded and everything fell silent. We stood, with those few old soldiers and their families, many of whom I recognised from last year, and silently thought our thoughts. 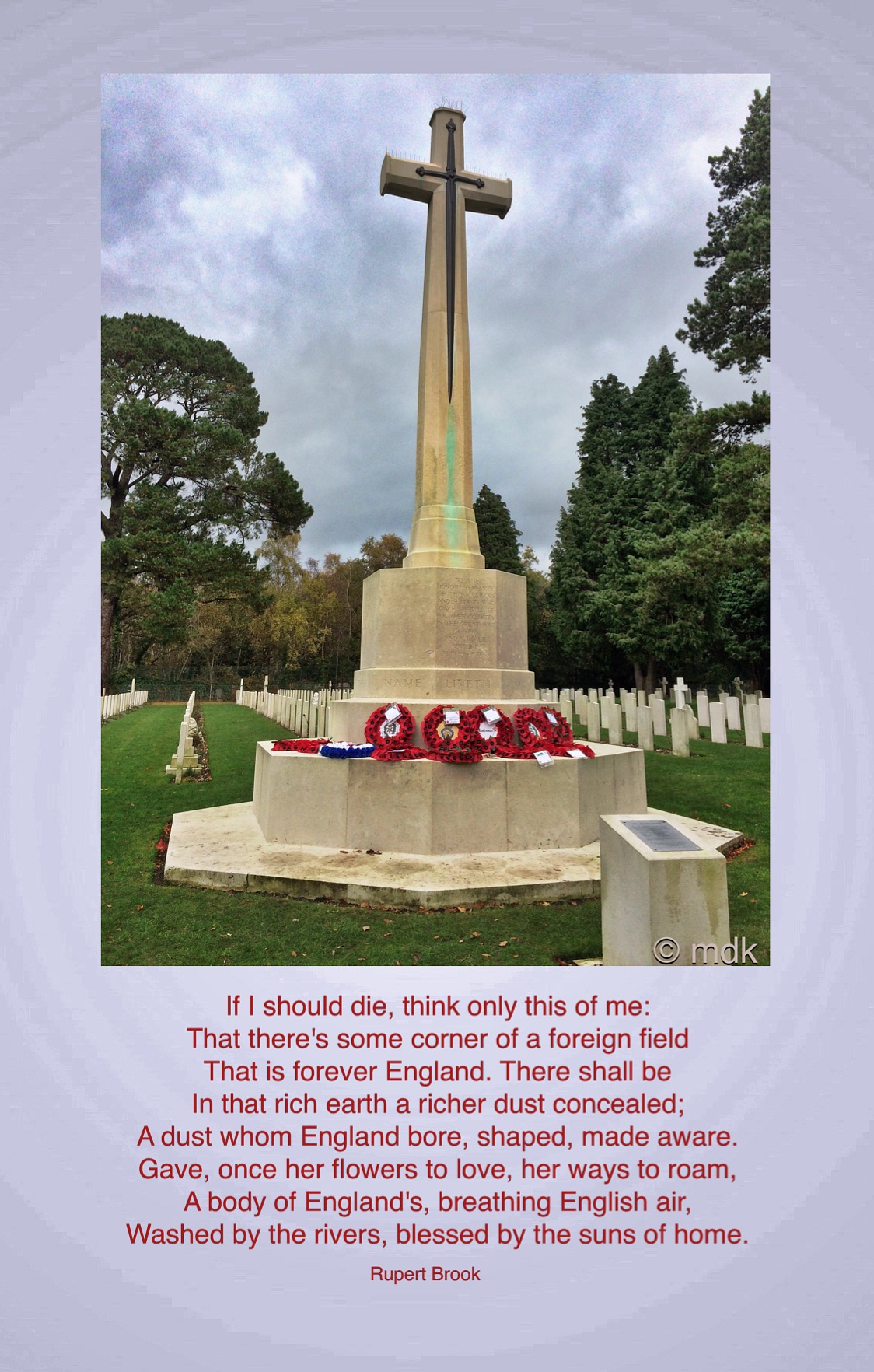 Last year the silence ended with a beautiful bagpipe rendition of Amazing Grace. The solder who played it was among the group but this year he had no bag with him. In the end no one spoke when the silence ended, they just quietly drifted away. CJ and I stood for a moment reading the plaque in front of the cenotaph and then we too took our leave. 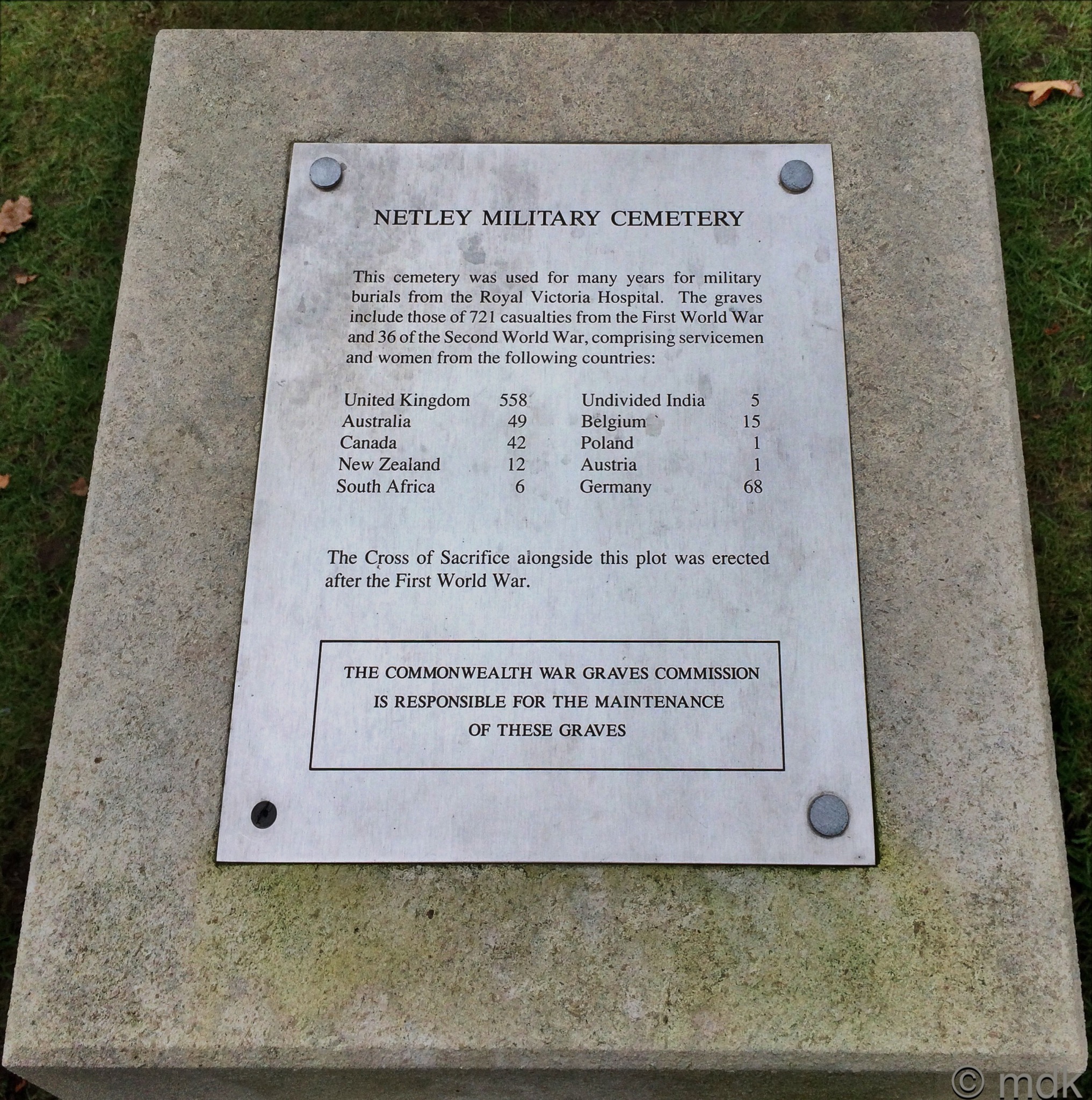 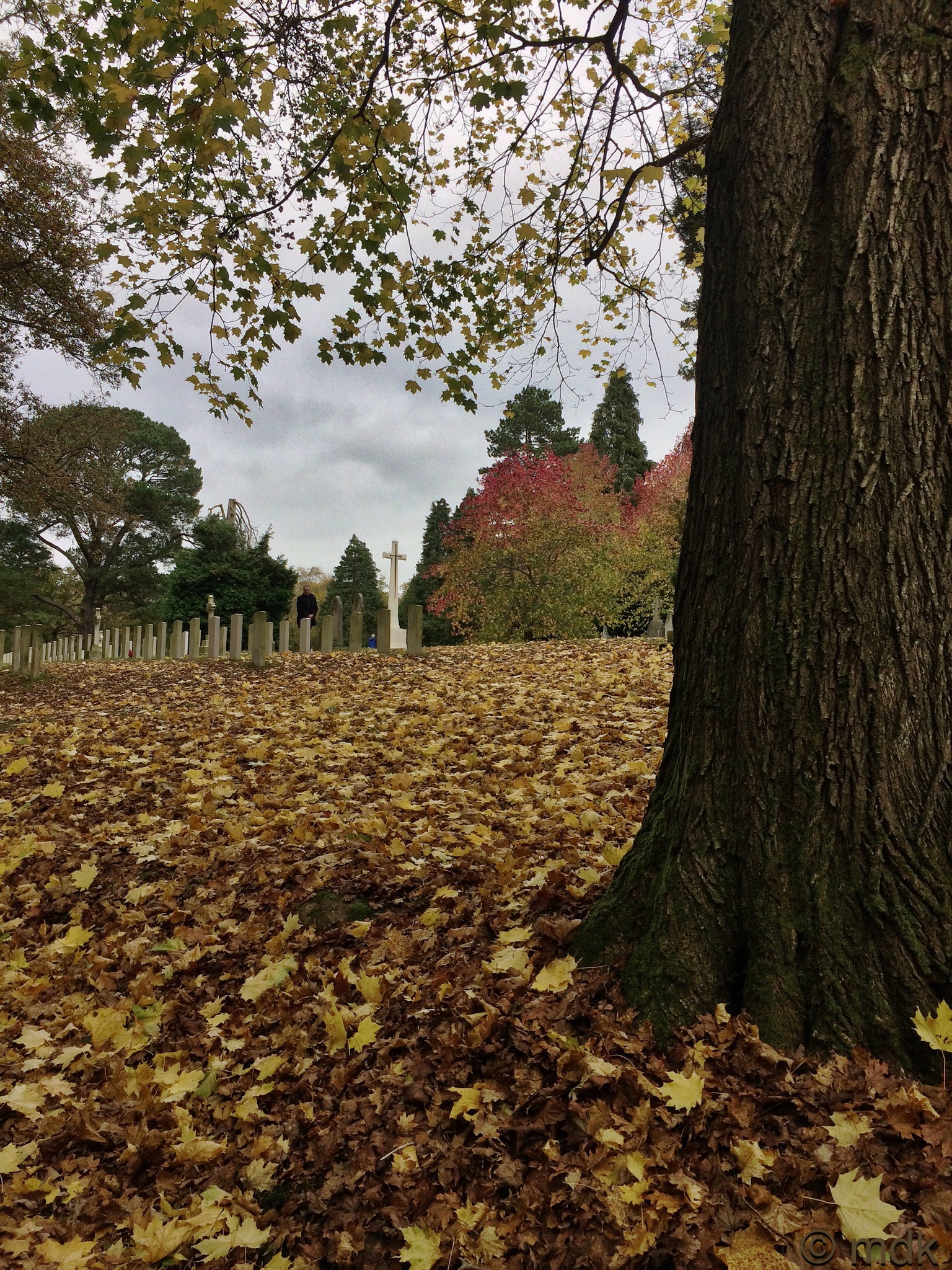 On the way out of the cemetery we fell into step with the piper.
“Last year I brought my bagpipes,” he said, “but I thought people might not want to hear them so I left them at home this year.”
“I remember you playing,” I said. “It was very moving. I’d hoped you’d play again today.”
“Next year, if I’m still around, I’ll bring them then,” he said.
“If I’m still around I’ll be there to hear you,” I smiled. 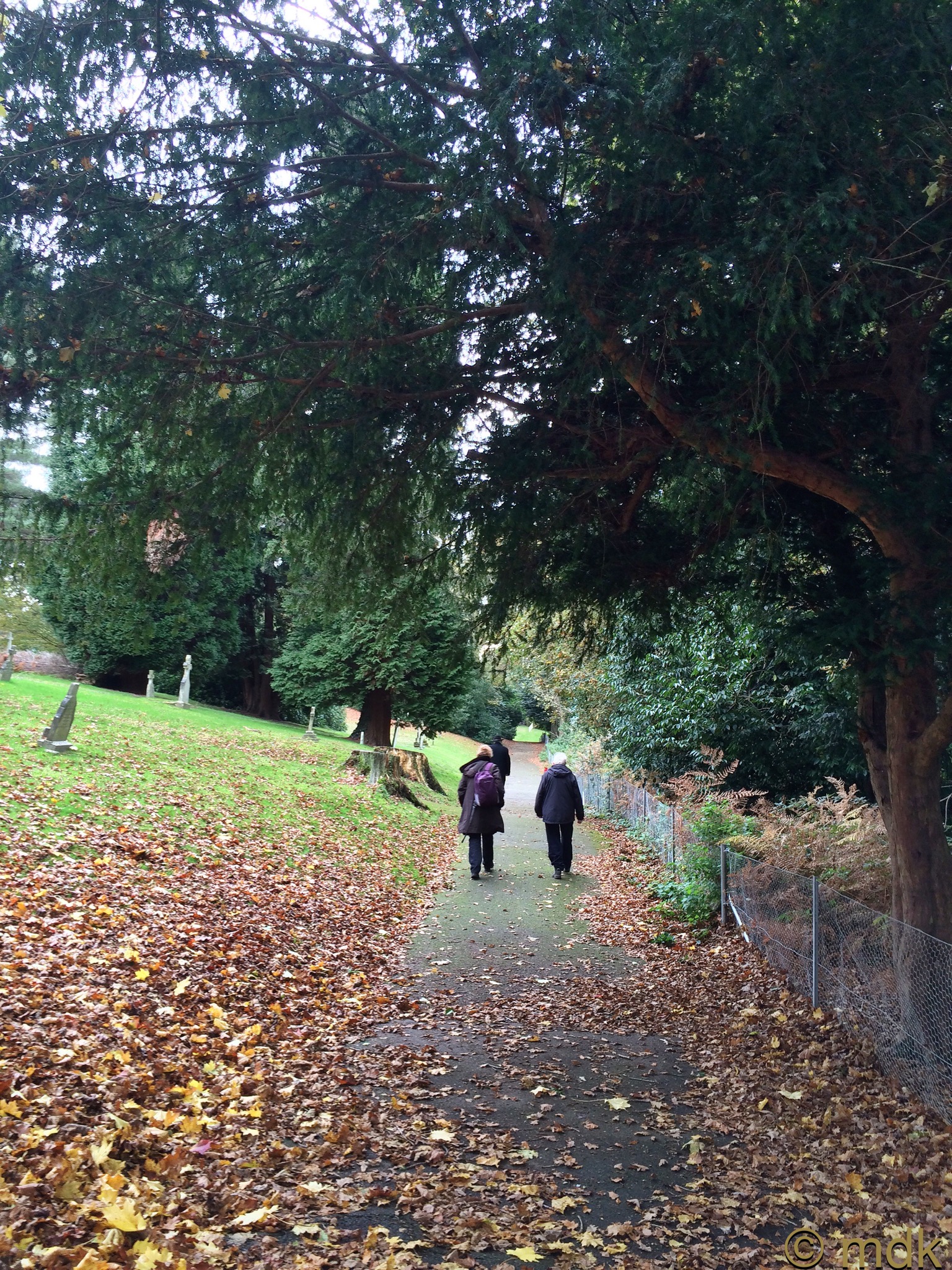