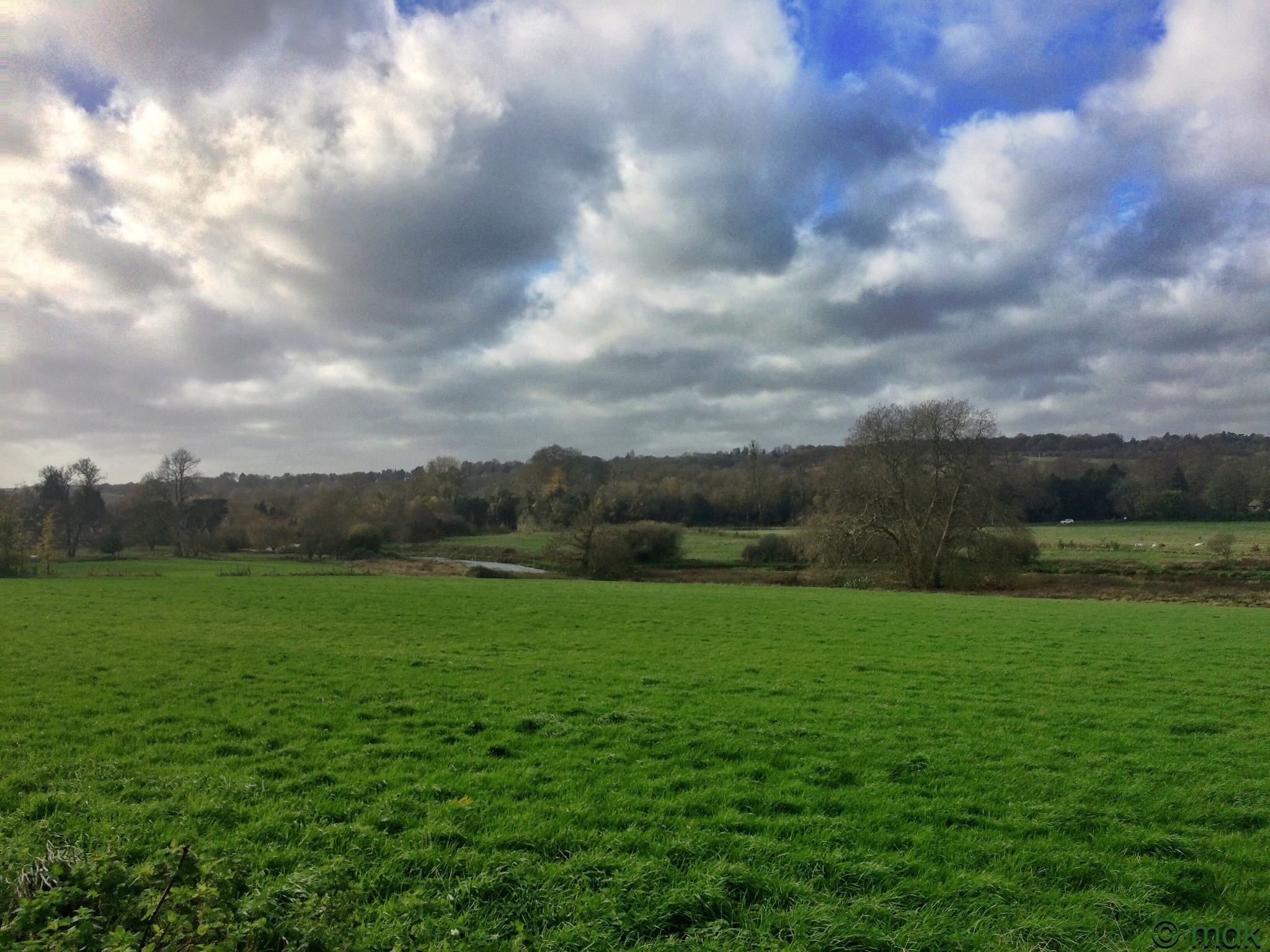 This morning there was a break in the rain and a hint of sun between the dark clouds. It seemed too good an opportunity to miss so I grabbed the car keys and my walking boots. CJ who doesn’t like to miss an opportunity to get out, especially if it might mean conning me out of a coffee, tagged along for the ride. Over breakfast I’d worked out a route and even found a couple of likely parking places and somewhere to stop for that coffee. It all looked suspiciously like a plan.

We began with an easy drive to Eastleigh followed by a slightly more nerve wracking onward journey towards Twyford. Of course this is a route I know well on foot but walking doesn’t entail negotiating roundabouts and it all seemed slightly confusing with landmarks appearing long before I expected them to. It was almost disappointing not to meet with any walkers on the long stretch of footpathless road where I’d spent half my time jumping onto verges on my walks. I’d have liked the chance to prove that I was a considerate driver who slowed down and moved over. Still, we arrived in one piece and, after a moment of panic when the place I’d hoped to park was already full of cars, we found somewhere in a quiet side road near my favourite footpath.

Twyford Down is criss crossed by a series of trackways known locally as dongas, made by farmers herding their animals to surrounding markets over countless generations. Whether the trail behind the High Street is actually one of these I don’t know but it has been a stopping point on many a walk and the views down over the River Itchen are some of my favourite. CJ, who has never been to Twyford before, seemed suitably impressed by the vista of bare trees and grass jewel bright and lush from all the recent rain.
“When I was training for the Moonwalk I always sat on one of the benches and drank my chocolate milk,” I told him. “I wish I’d brought some now for old time’s sake.”
“Mmm, that would have been nice,” he said, licking his lips. 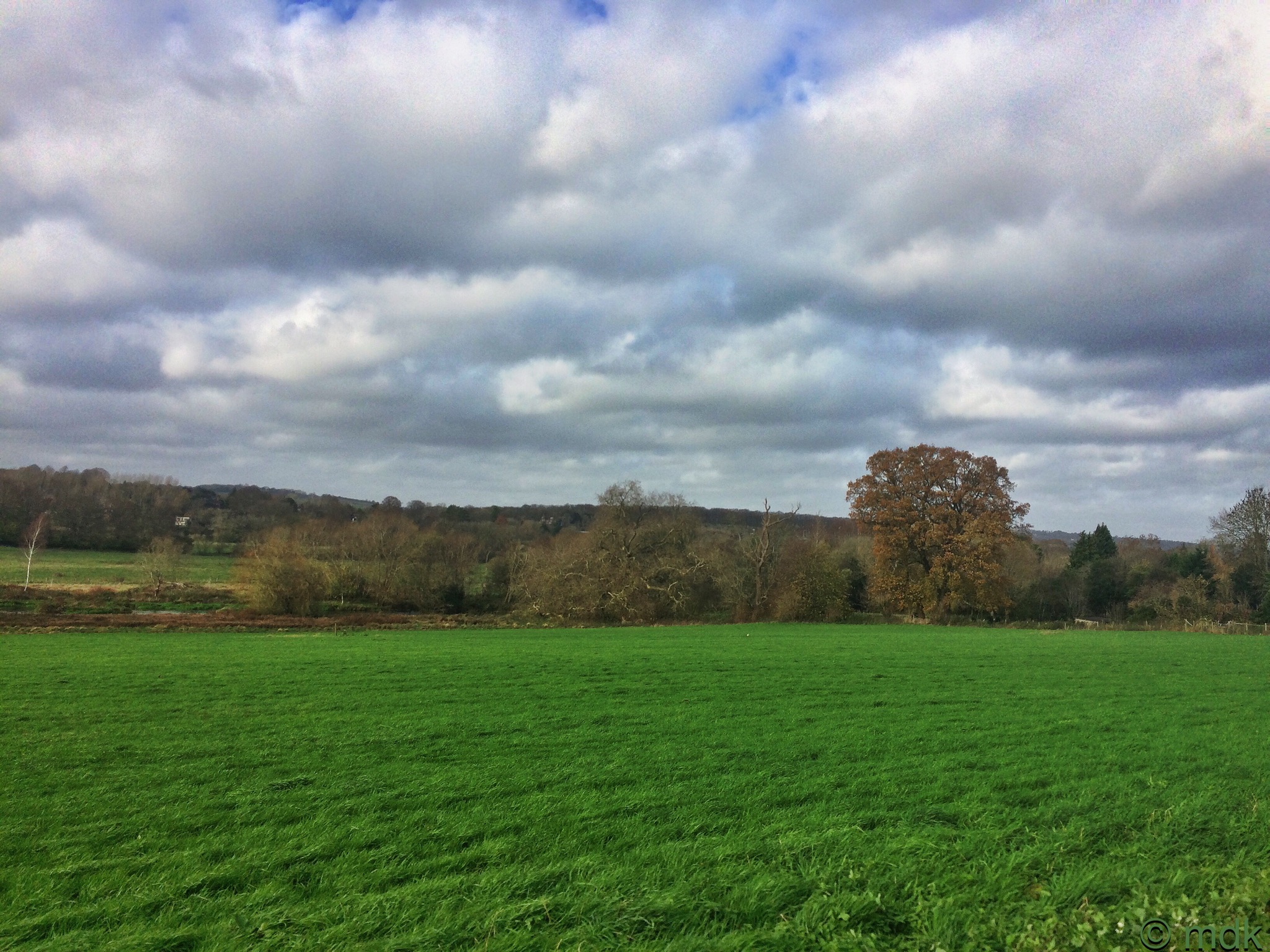 “The path goes through the churchyard and back to the road,” I explained. “You can walk all the way to the Hockley Viaduct but I’ve got other plans today so we’ll just go as far as the church.”
By this time we could see the spire behind the trees and a few minutes later we were entering the churchyard.
“The walls are made of flint,” CJ noticed.
“These chalk downs are filled with flint” I told him, “so I guess they used what they had to hand. In flint rich areas it was a popular material for Saxon and Norman churches too.”
“Is this a Saxon church then, or a Norman one?” he asked, looking grudgingly impressed with my knowledge.
“Actually it was built in the 1800’s by the man who designed the Natural History Museum in London. I forget his name now. They say there was a Druid temple here once though and the first Christian church was Saxon,” not wishing to shatter his illusions I neglected to say I only knew any of this from Googling after previous visits.
“So it’s not that old at all then?” he looked slightly disappointed.
“Technically not,” I admitted, “but when they built this one they kept some of the pillars and arcades from the later Norman church and some of the windows and doorways date back to the fifteenth and sixteenth century. They found twelve Druid stones under the Norman tower too and they’re still there.” 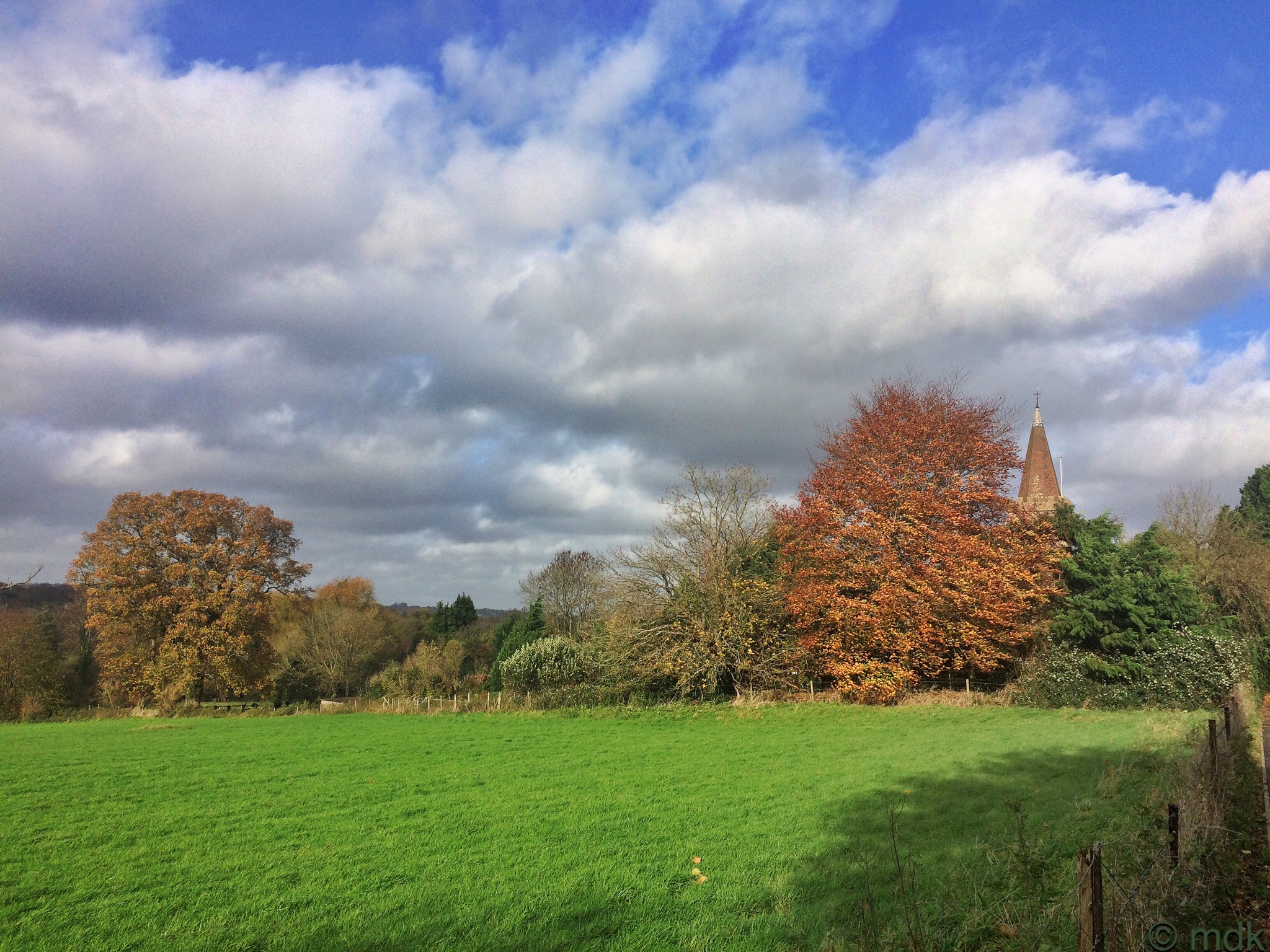 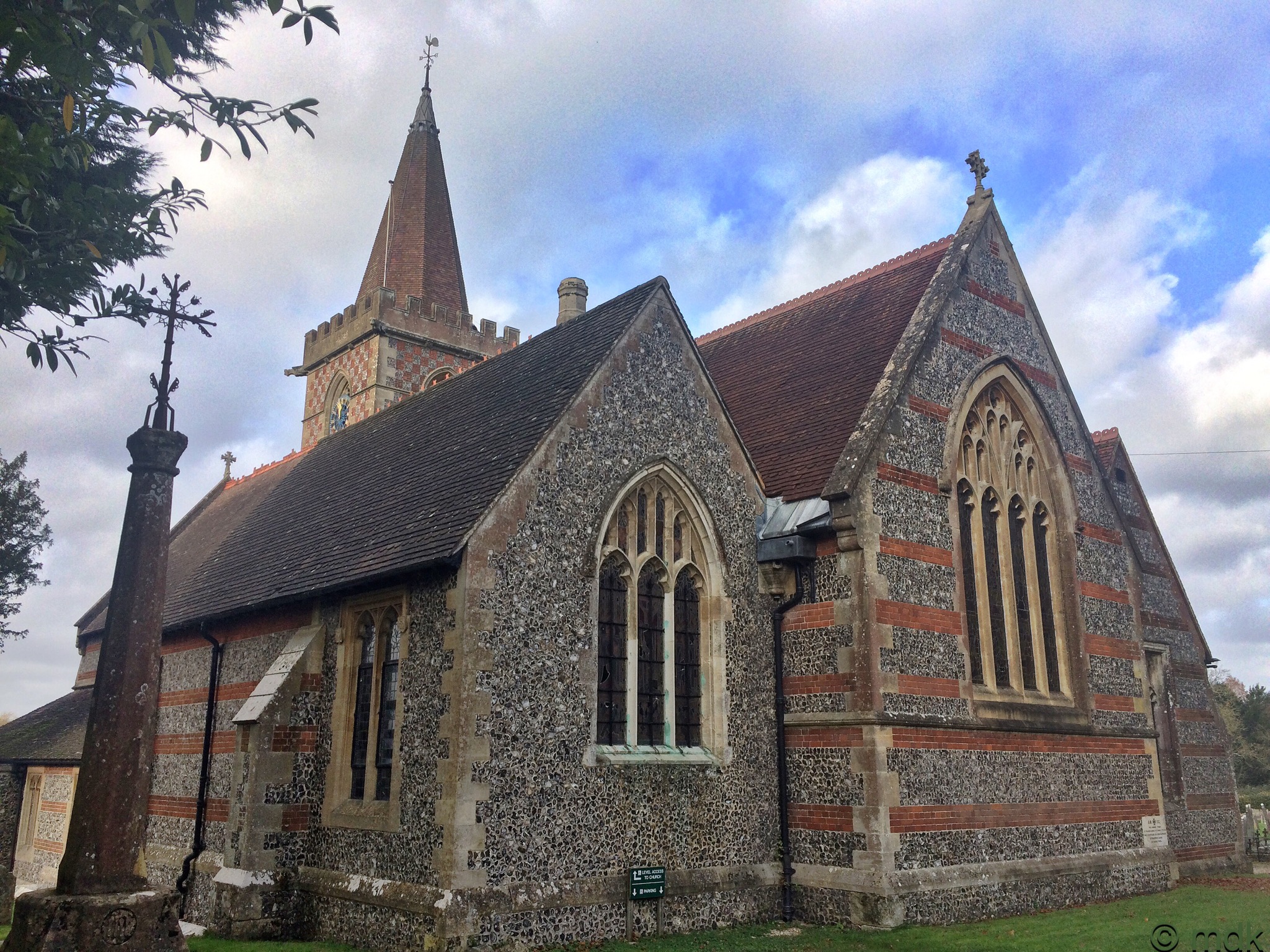 By this time we’d walked around the side of the church where I stopped to take a picture of the grave stones around the old yew tree and the old lawn roller that’s been there since my first visit.
“They say this tree is a thousand years old,” I said.
“Seriously? Is that even possible?” CJ looked sceptical.
“Tree experts think it’s probably an exaggeration but it’s likely to be over four hundred and fifty years old and it’s certainly the oldest yew tree in a churchyard in England.” 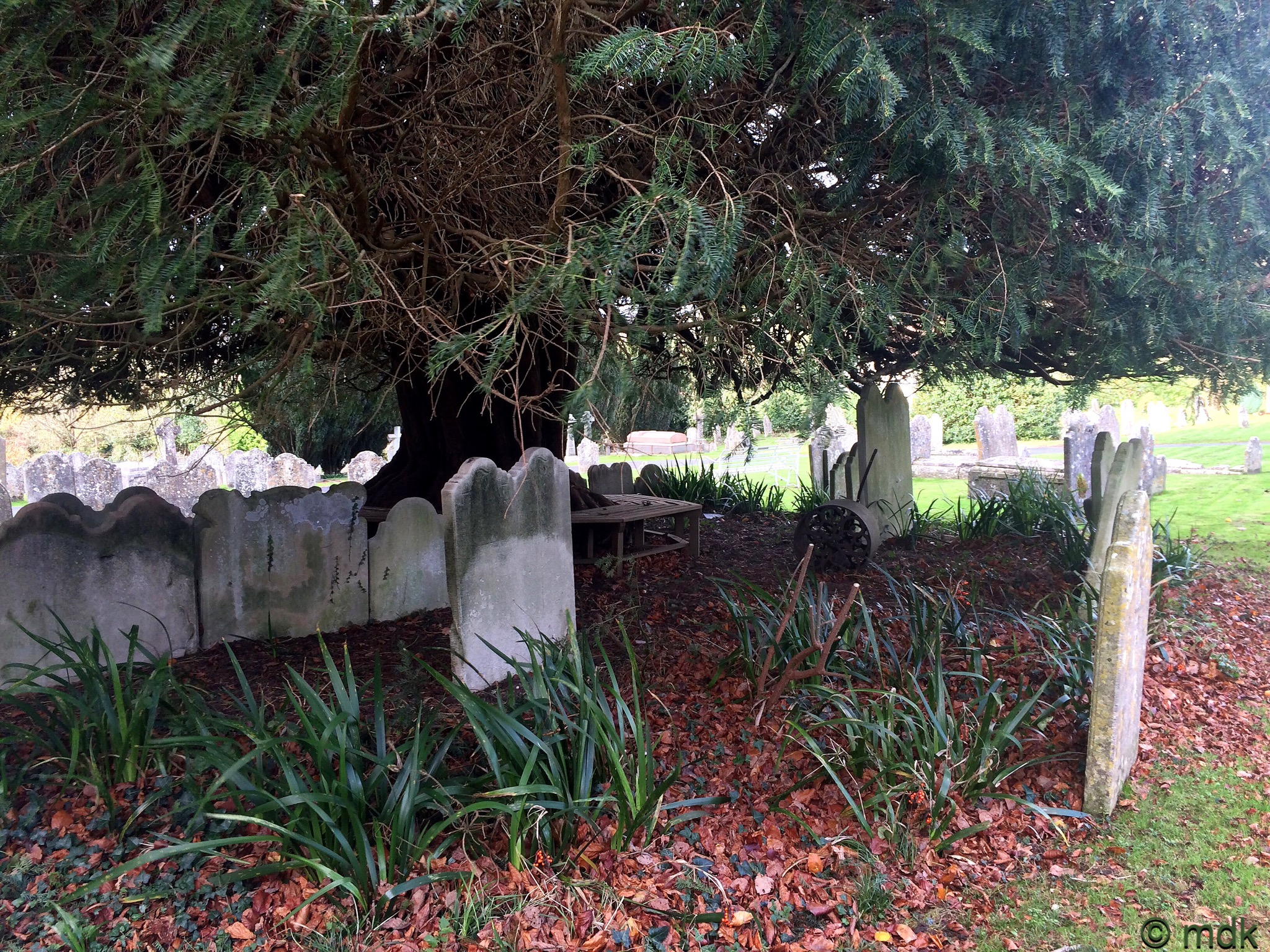 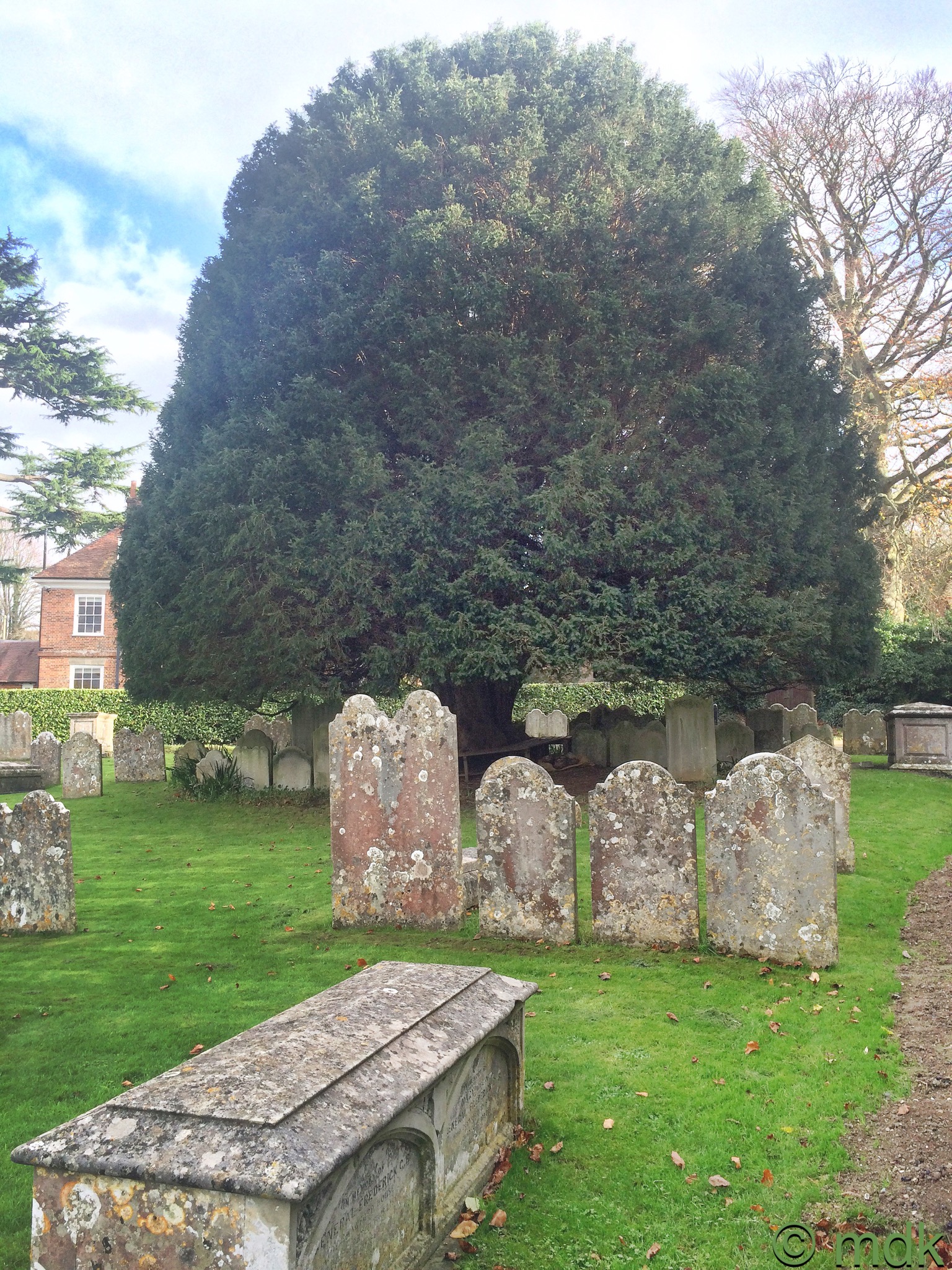 My plan had been to walk around the church and take a look at a few graves but, when we came to the door it was open. In all the times I’ve walked through St Mary’s churchyard I have never seen the church door open so it seemed too good a chance to pass up and we went inside. 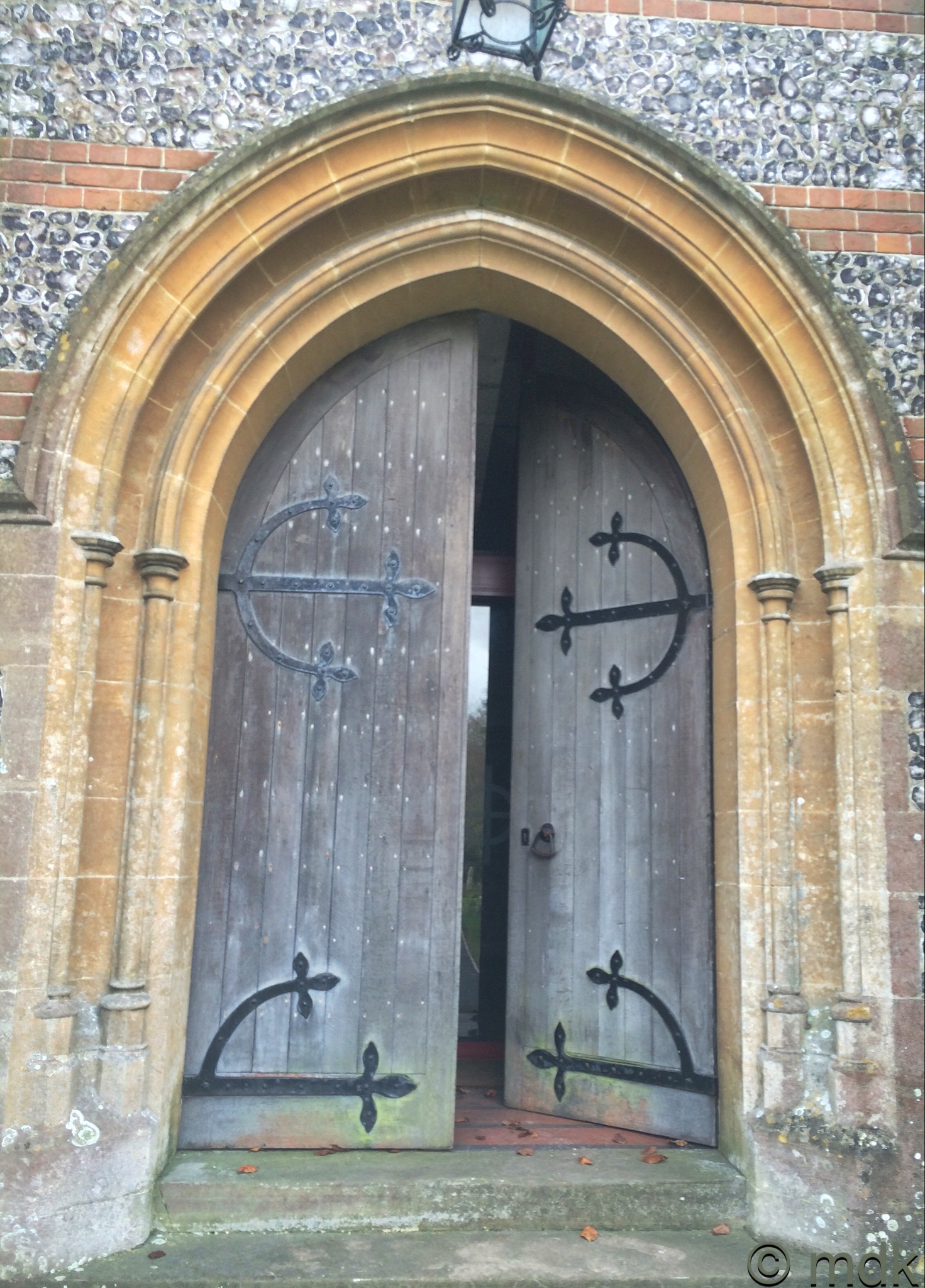 It took our eyes a while to adjust to the darkness. The light streaming through the beautiful stained glass windows didn’t seem to reach far. One of the things I’d always been curious about was those windows. The only way to get the full effect of stained glass is from the inside and this was why I’d been so eager to take advantage of the open door. Although the end windows were undoubtedly more colourful and filled with religious symbols the plainer side windows really captured my imagination. How many times had I stood outside staring at these little trefoil windows trying to imagine the light streaming through them? The reality of the subdued colours and floral design was stunning but the best part for me was the way the plain glass, thick and uneven in texture, gave a muted view of the outside world. 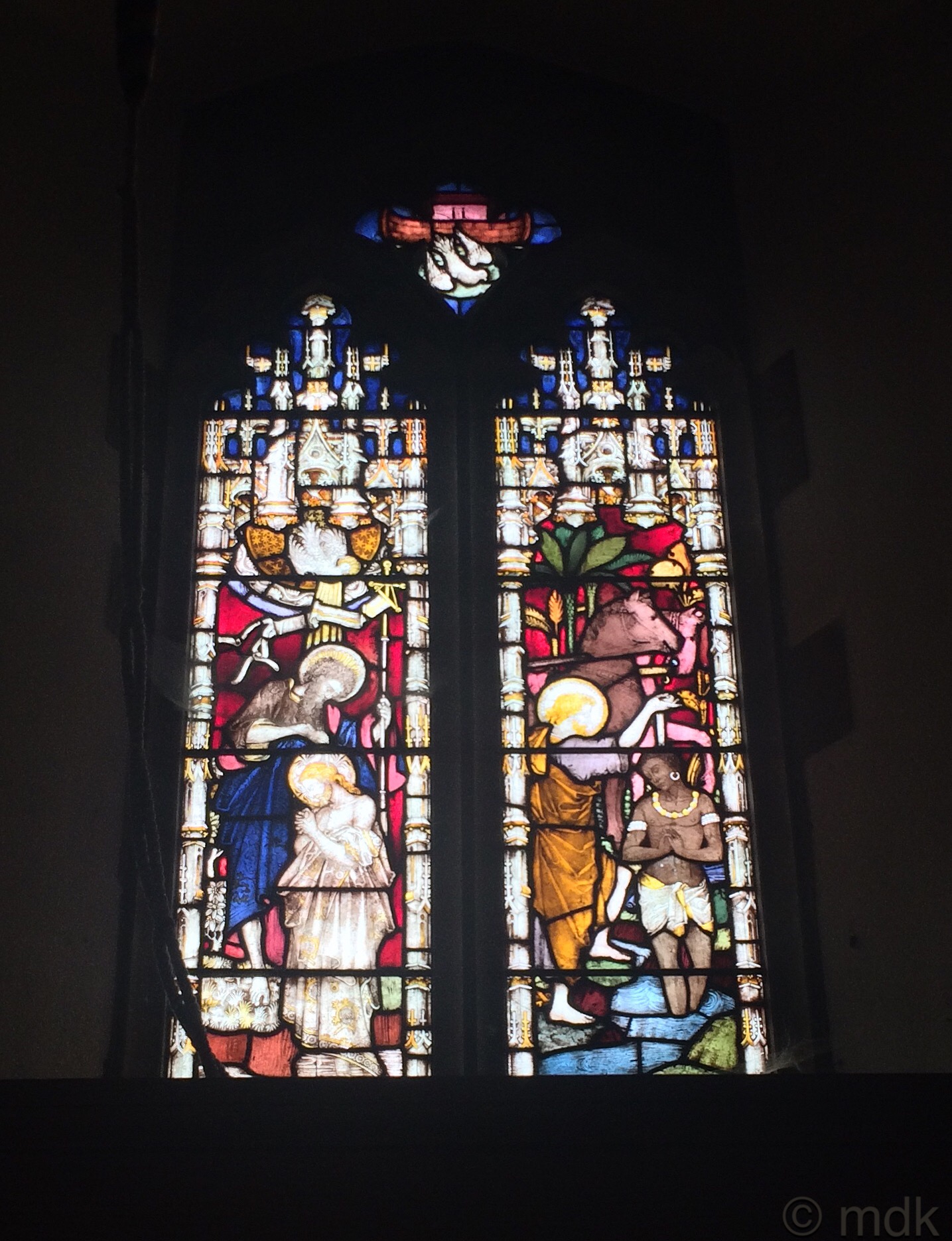 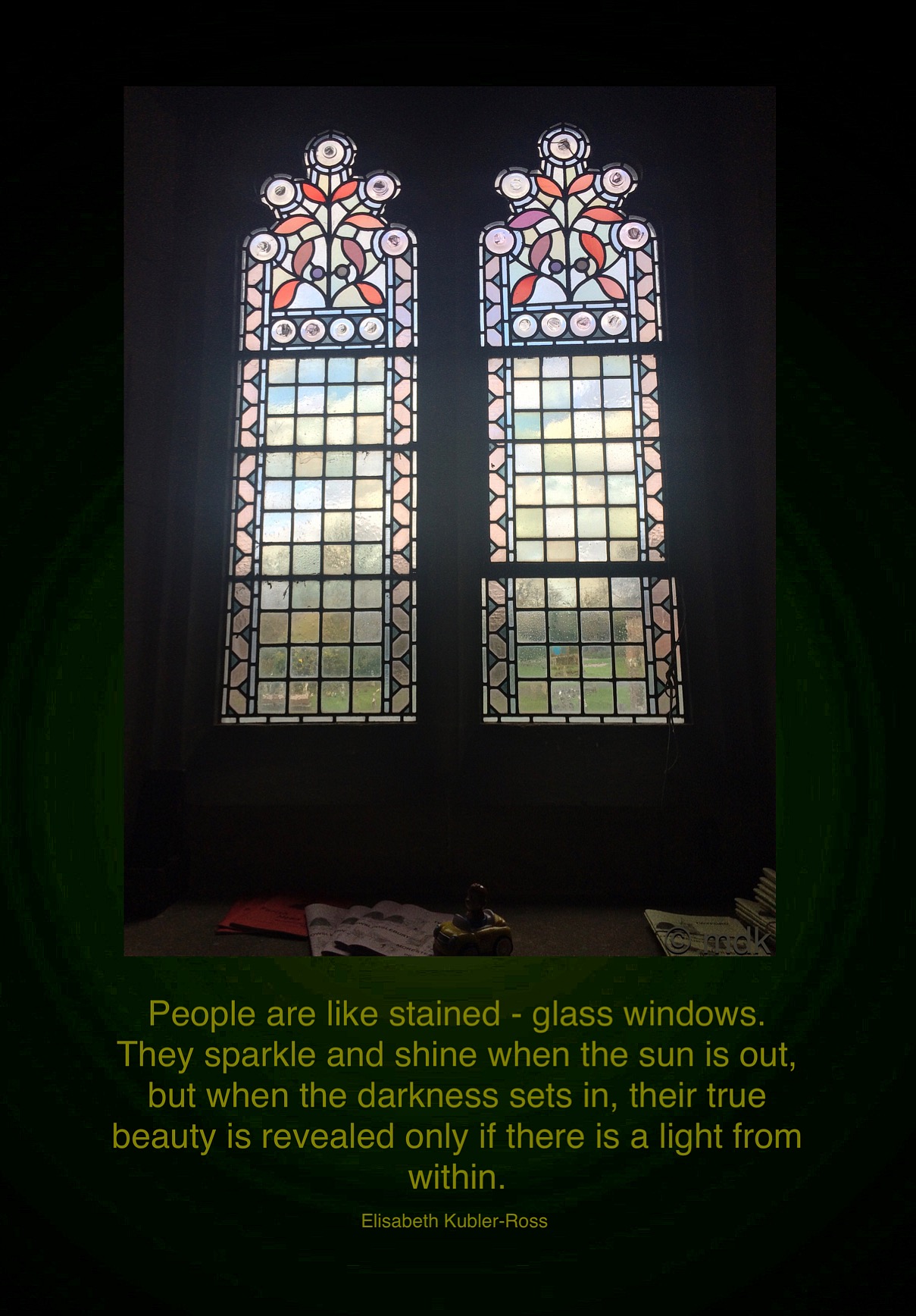 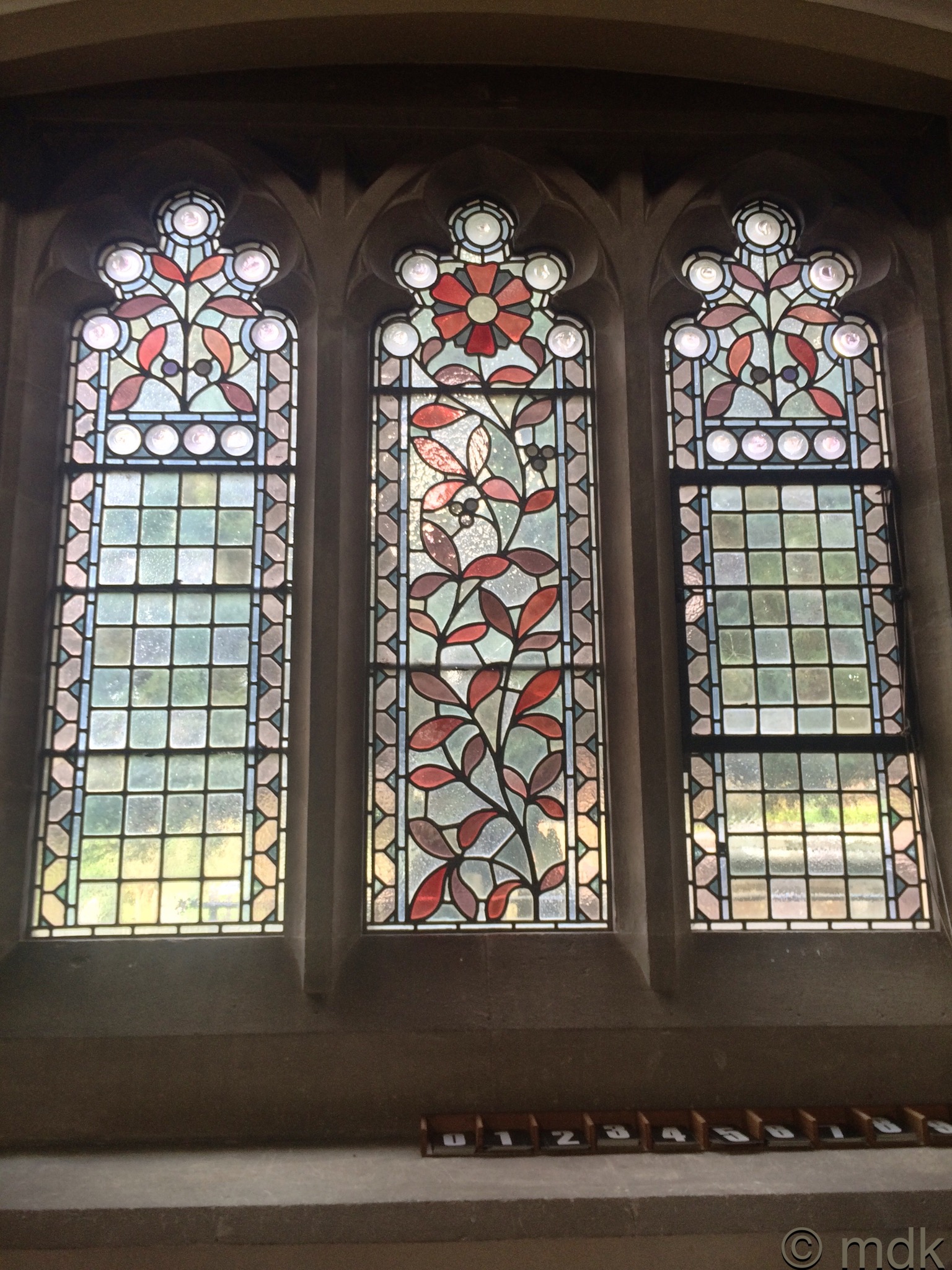 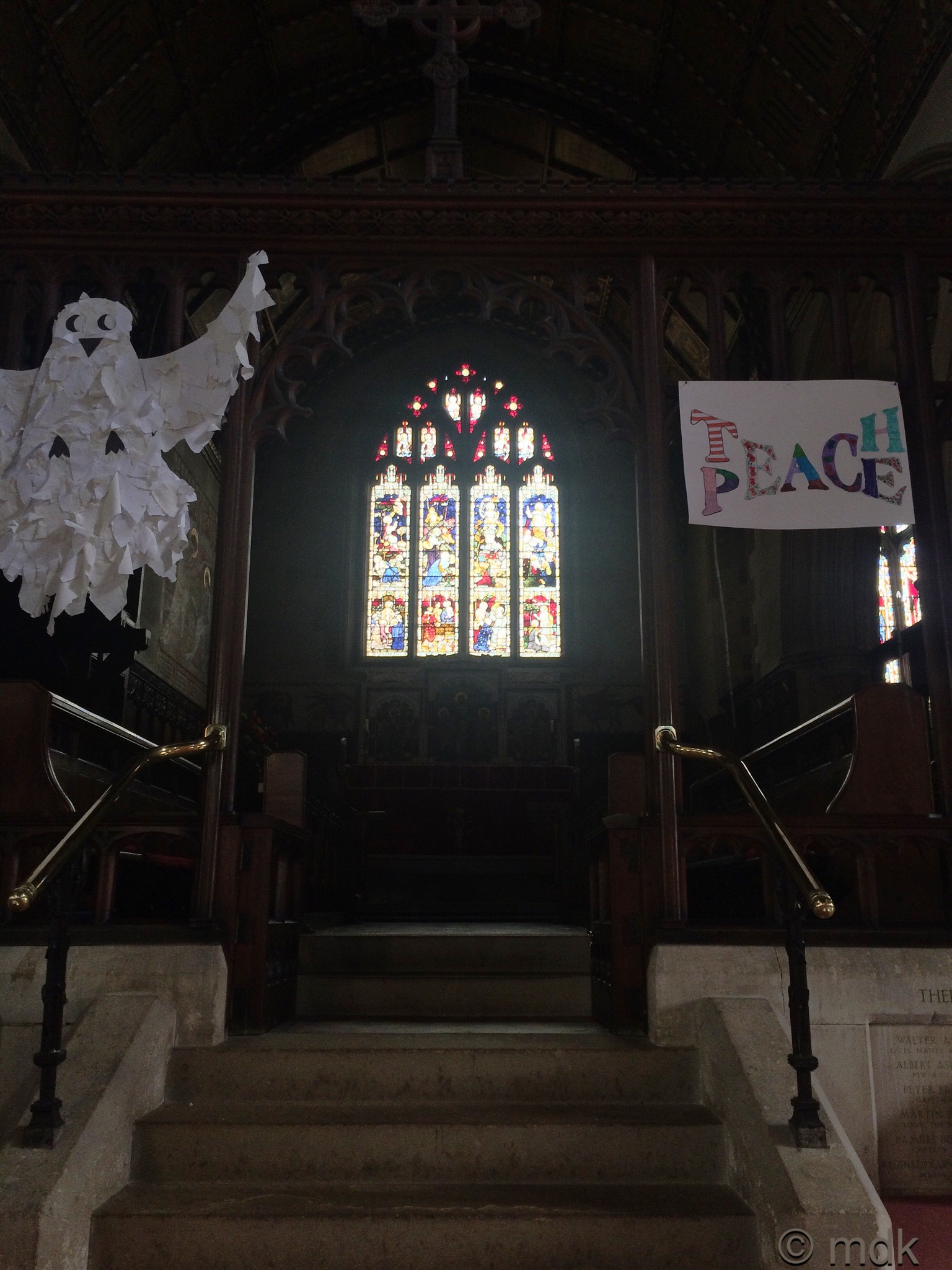 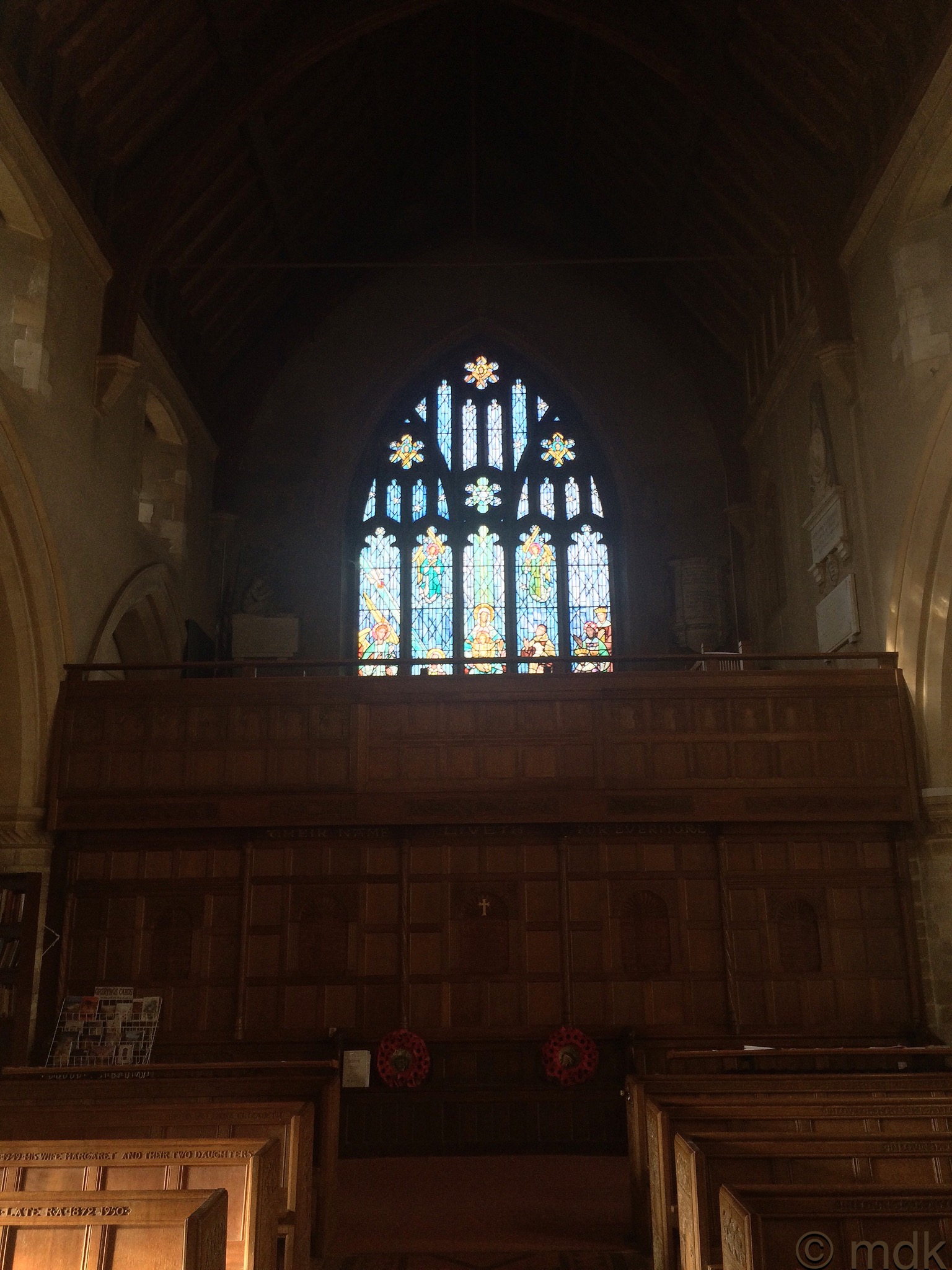 I’m not a church officionado by any stretch of the imagination. In fact I rarely go inside one but I do recognise a font when I see one and this one, I understand, is made of Purbeck stone and dates from the original twelfth century church. The cover, a carved figure of Christ, is obviously much newer. The arches of the arcades also came from the Saxon and Norman churches. For me though the wooden carvings were the most interesting. CJ and I stood and read the names on the World War I memorial and admired the poppy wreaths below.
“There aren’t many names,” CJ commented. “Do you think those were all the men the village lost?”
“Probably,” I said, “but it was such a small village I’m sure they were sorely missed.”
We spoke in whispers because, somehow, in a church it feels as if you should whisper. 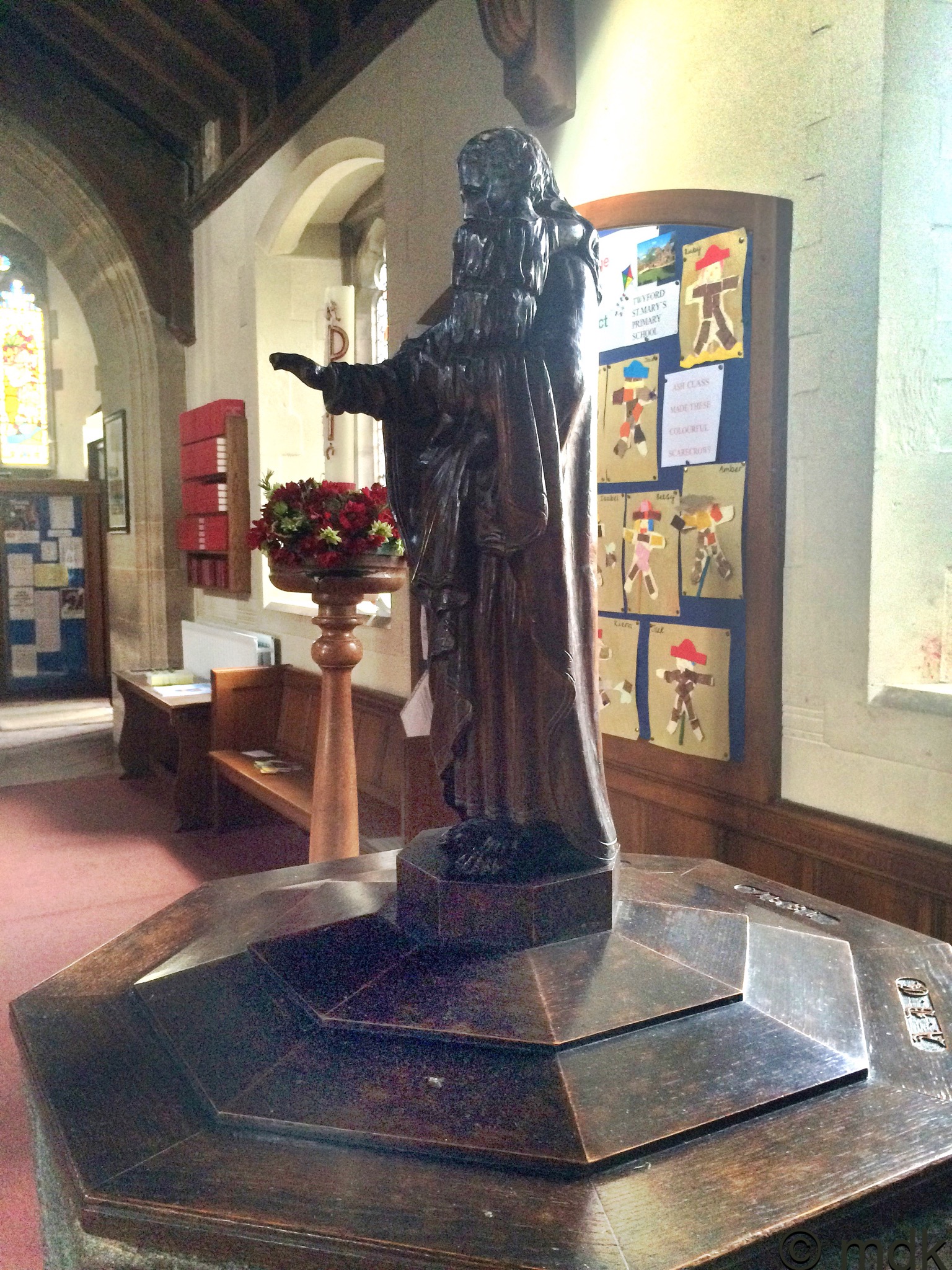 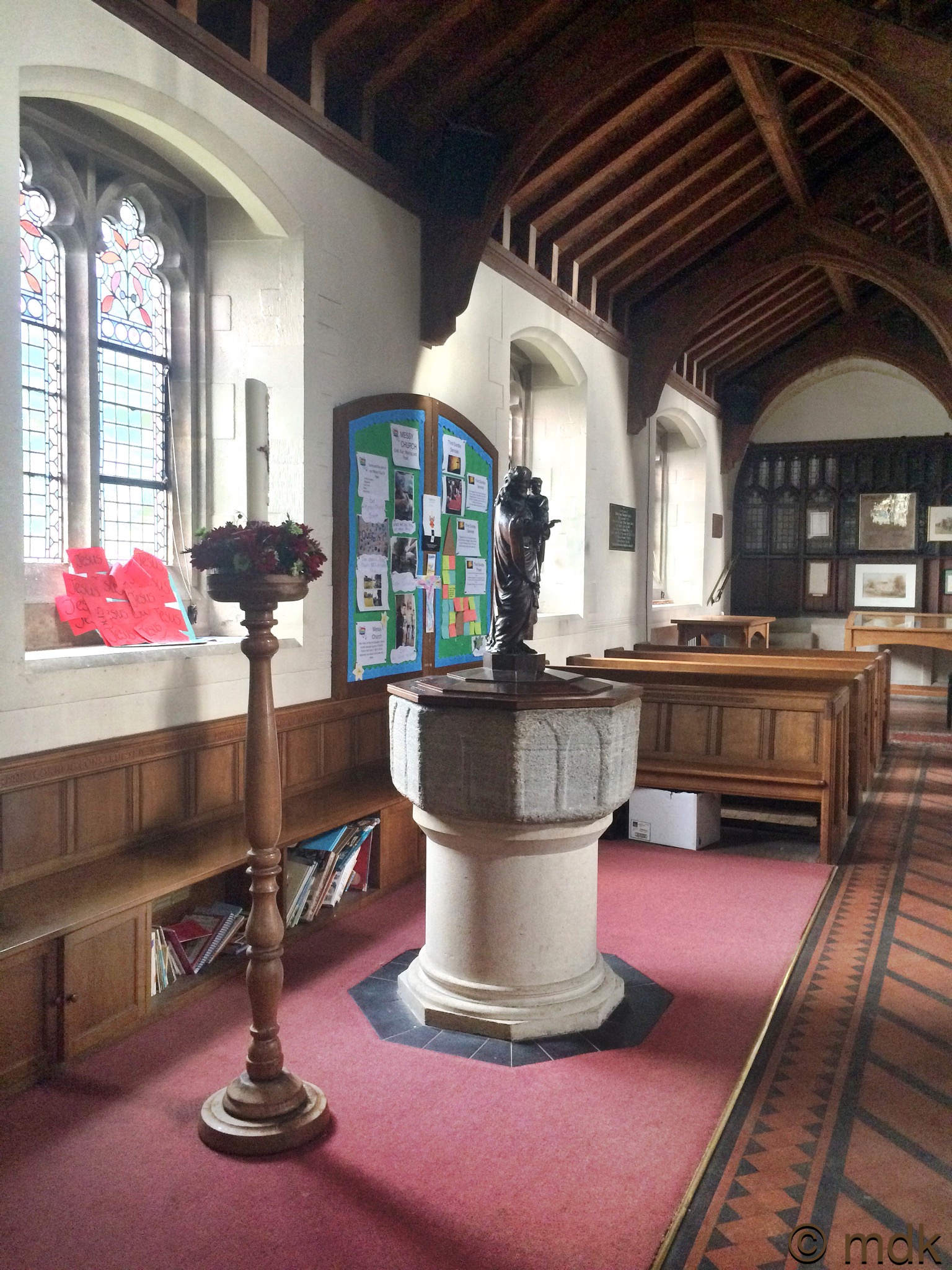 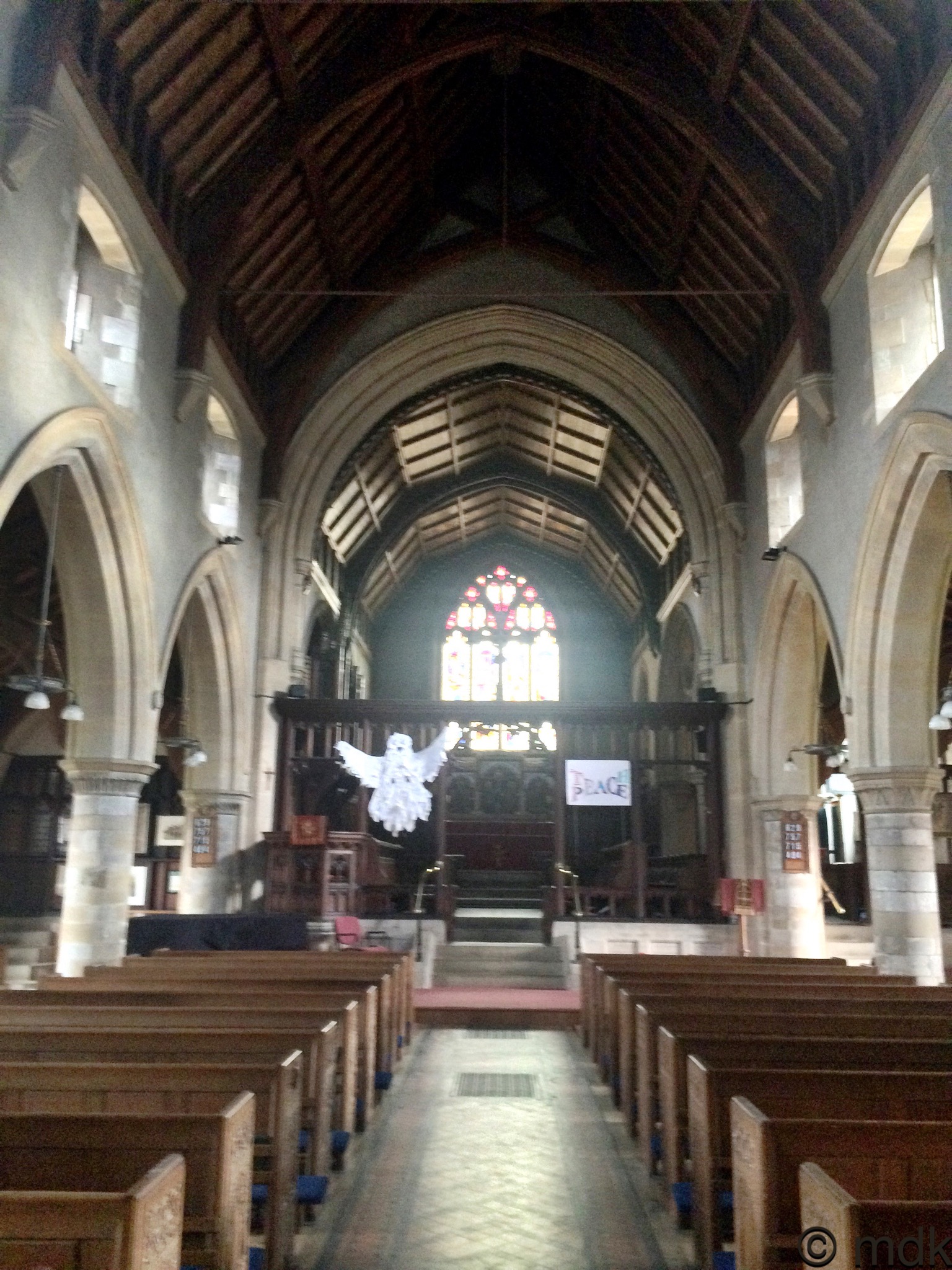 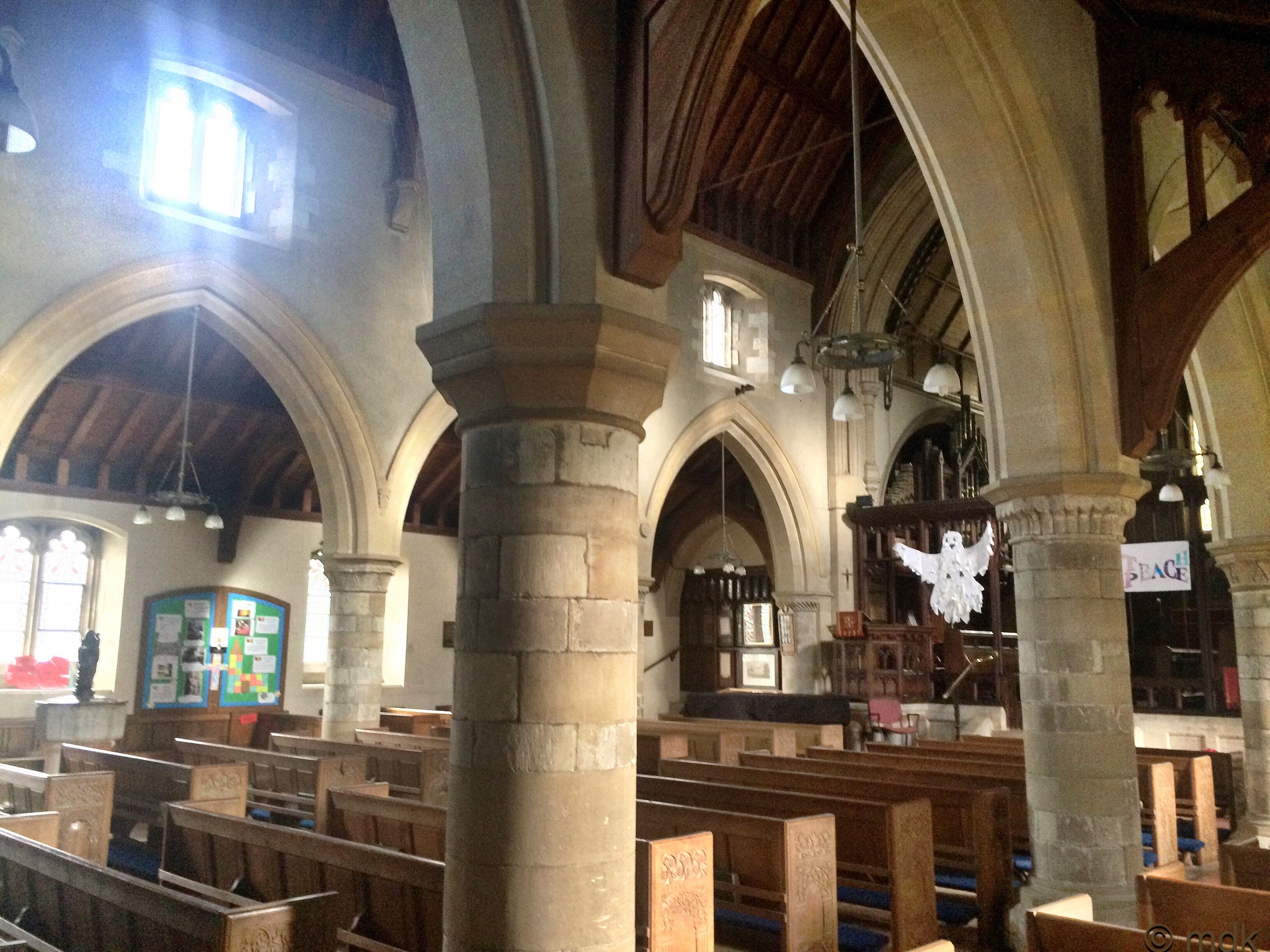 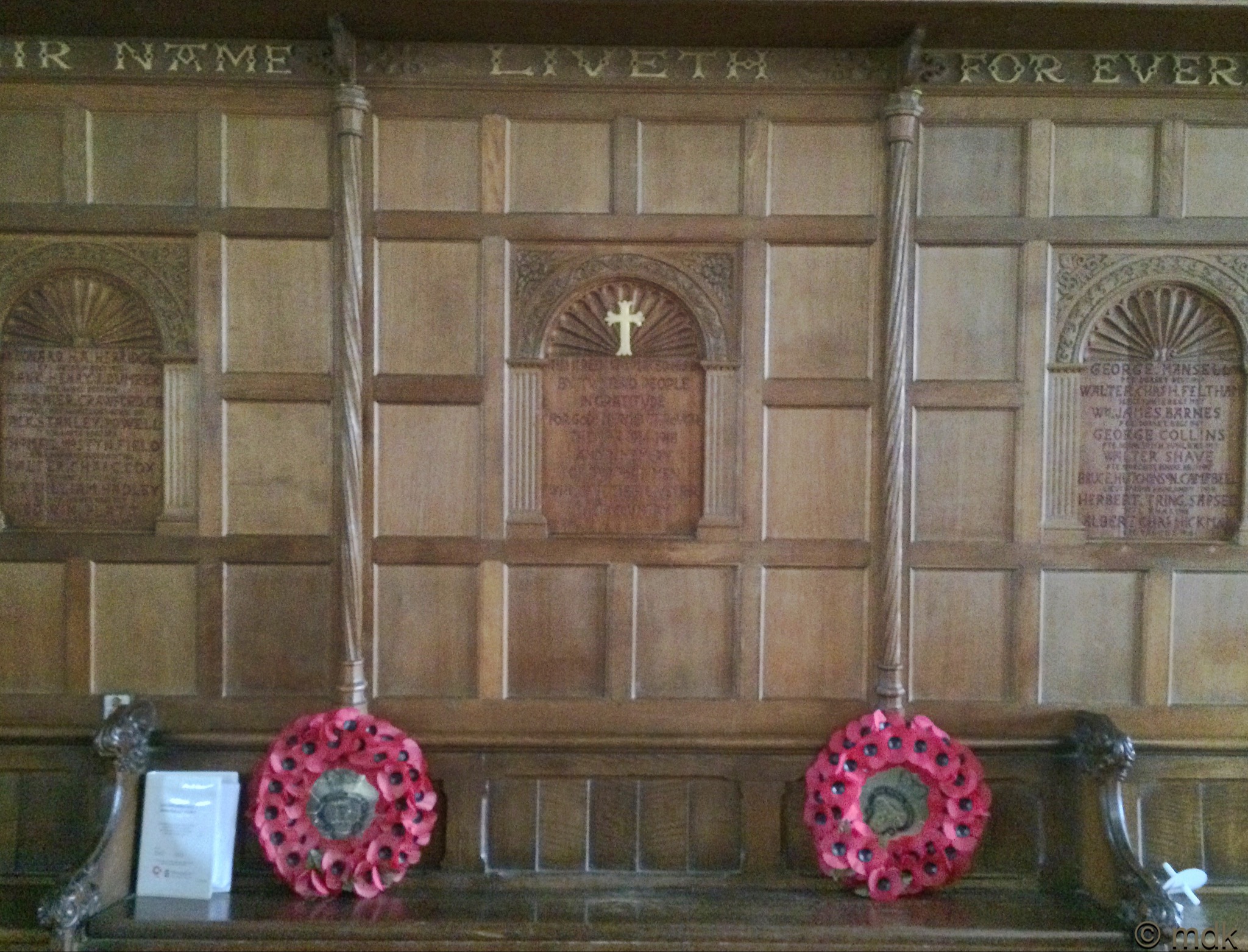 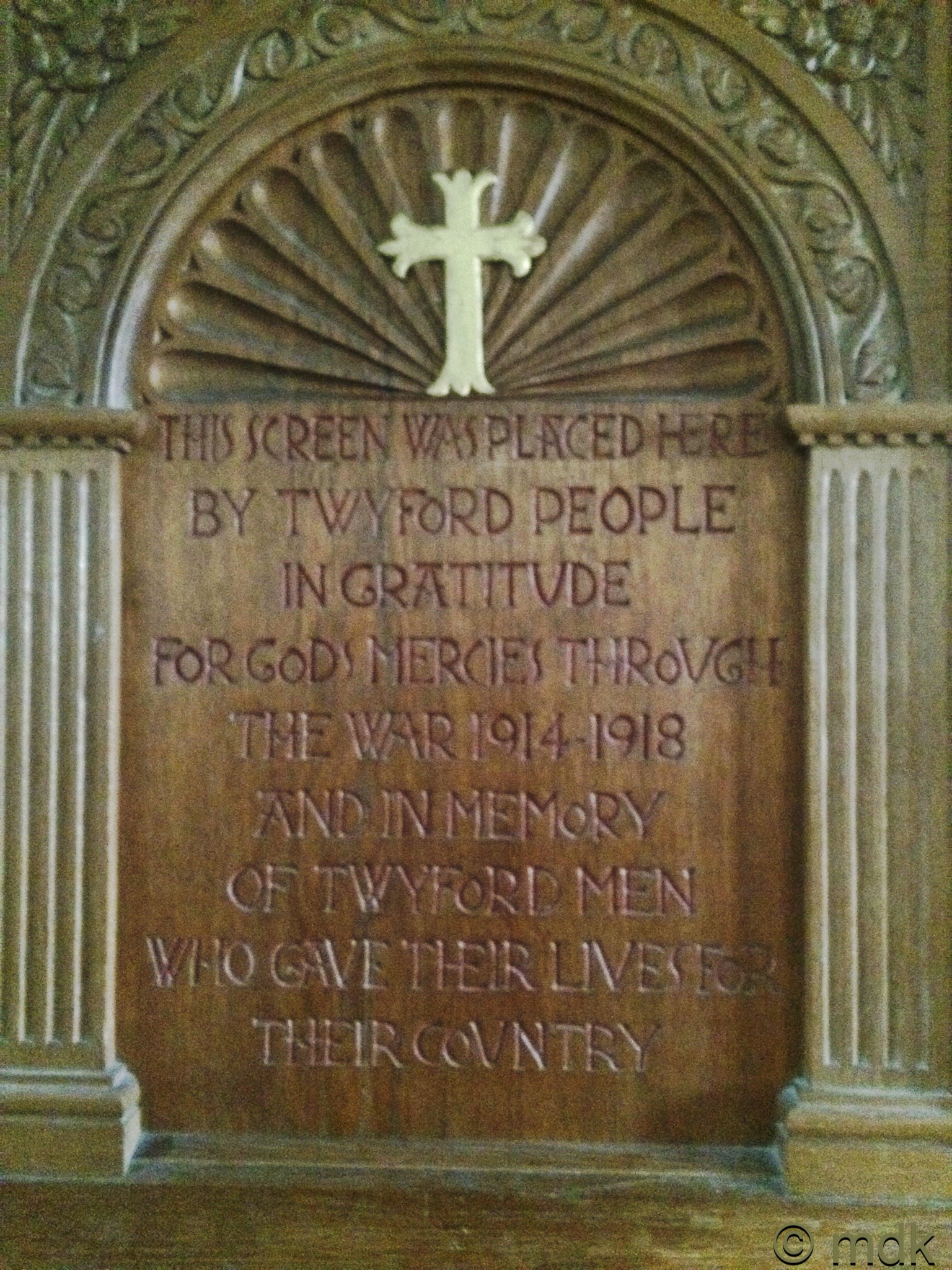 We emerged, blinking, into sunlight that seemed extra bright after the darkness inside the church. In fact the sky had clouded a little in our absence and some of those clouds looked a touch on the dark, threatening side. The low wintery sun was coming through in patches, bathing some gravestones in golden light while others were in shadow. It gave the churchyard an otherworldly look and I longed to wander around reading the inscriptions that hadn’t weathered away with age. 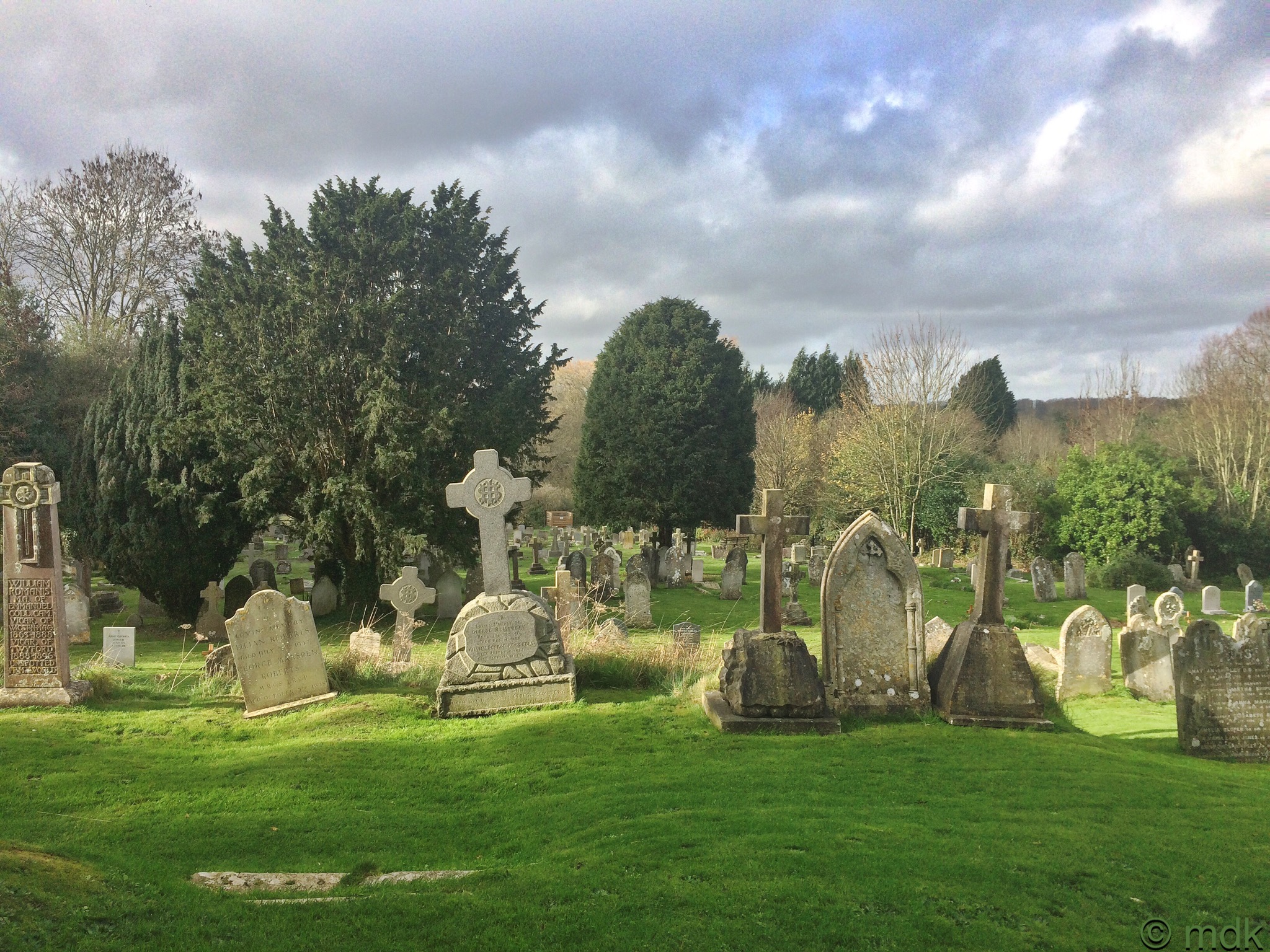 In the end we didn’t linger. I’m not sure CJ is as fond of old graves as me and I had other plans if the rain held off. Instead we wandered back along the footpath where we met with a black and white cat that reminded CJ so much of Fluffy he had to stop and play with her. It was as much as I could do to drag him away but the promise of coffee worked eventually and we headed back to the car. 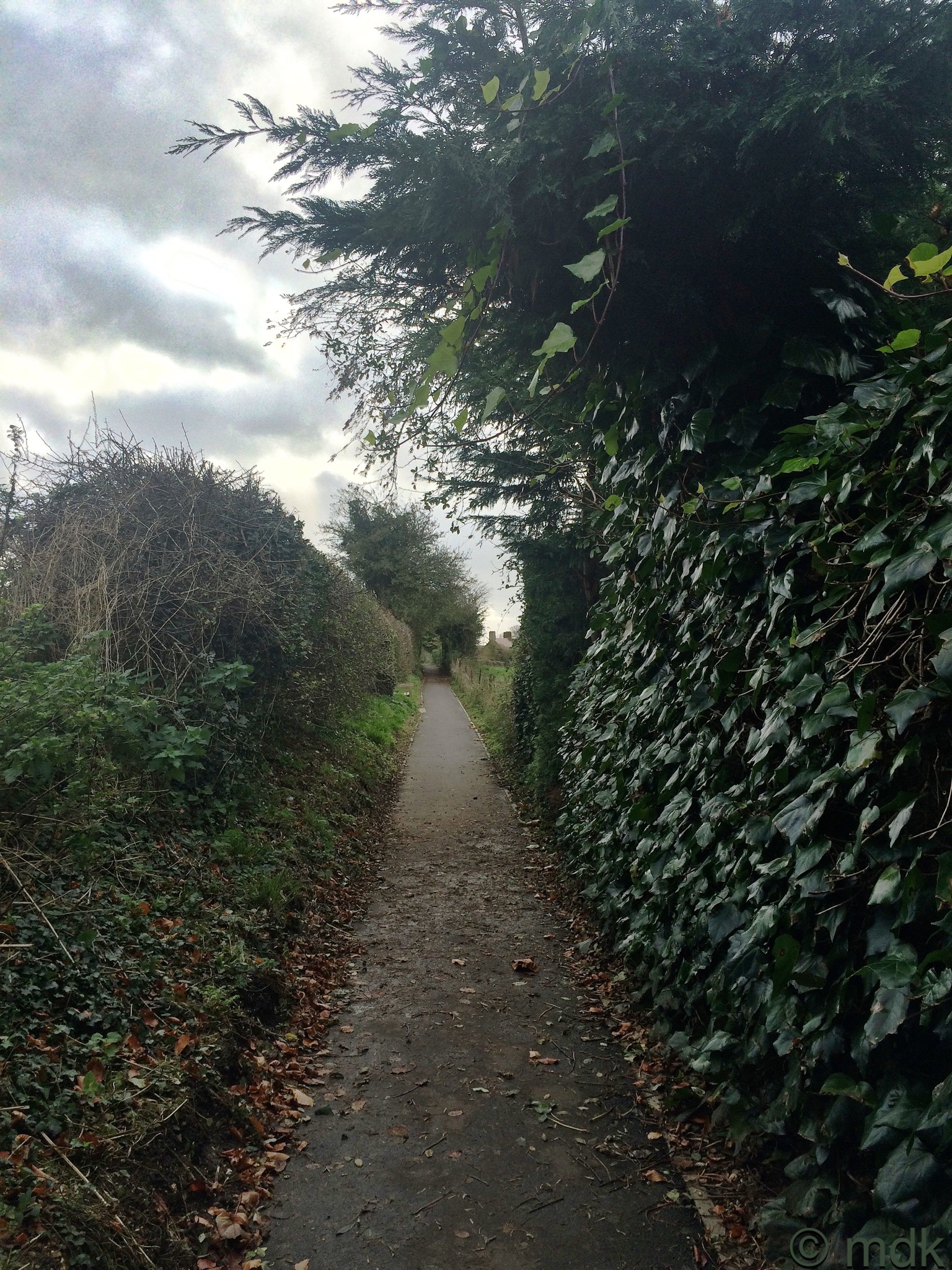 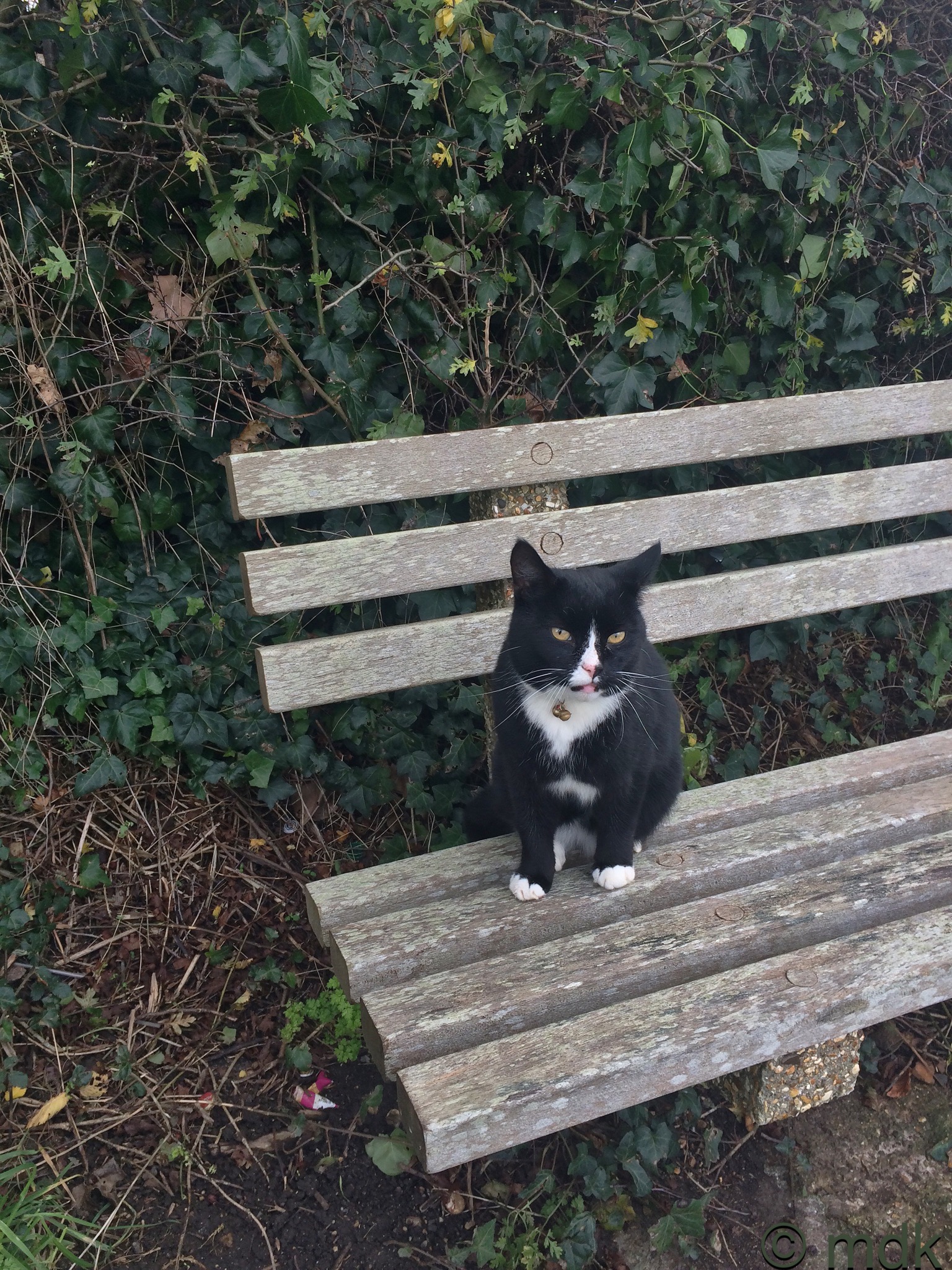 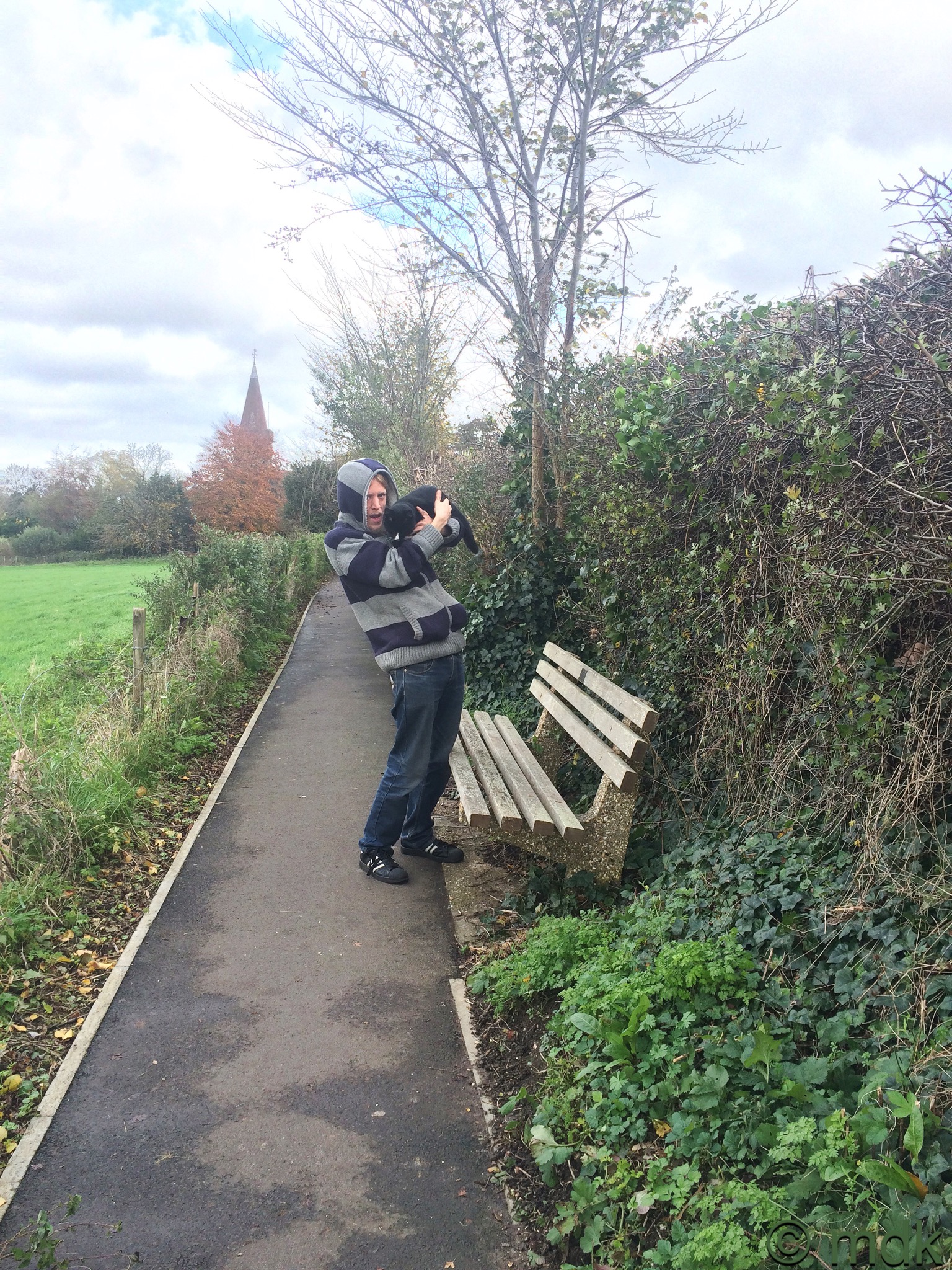