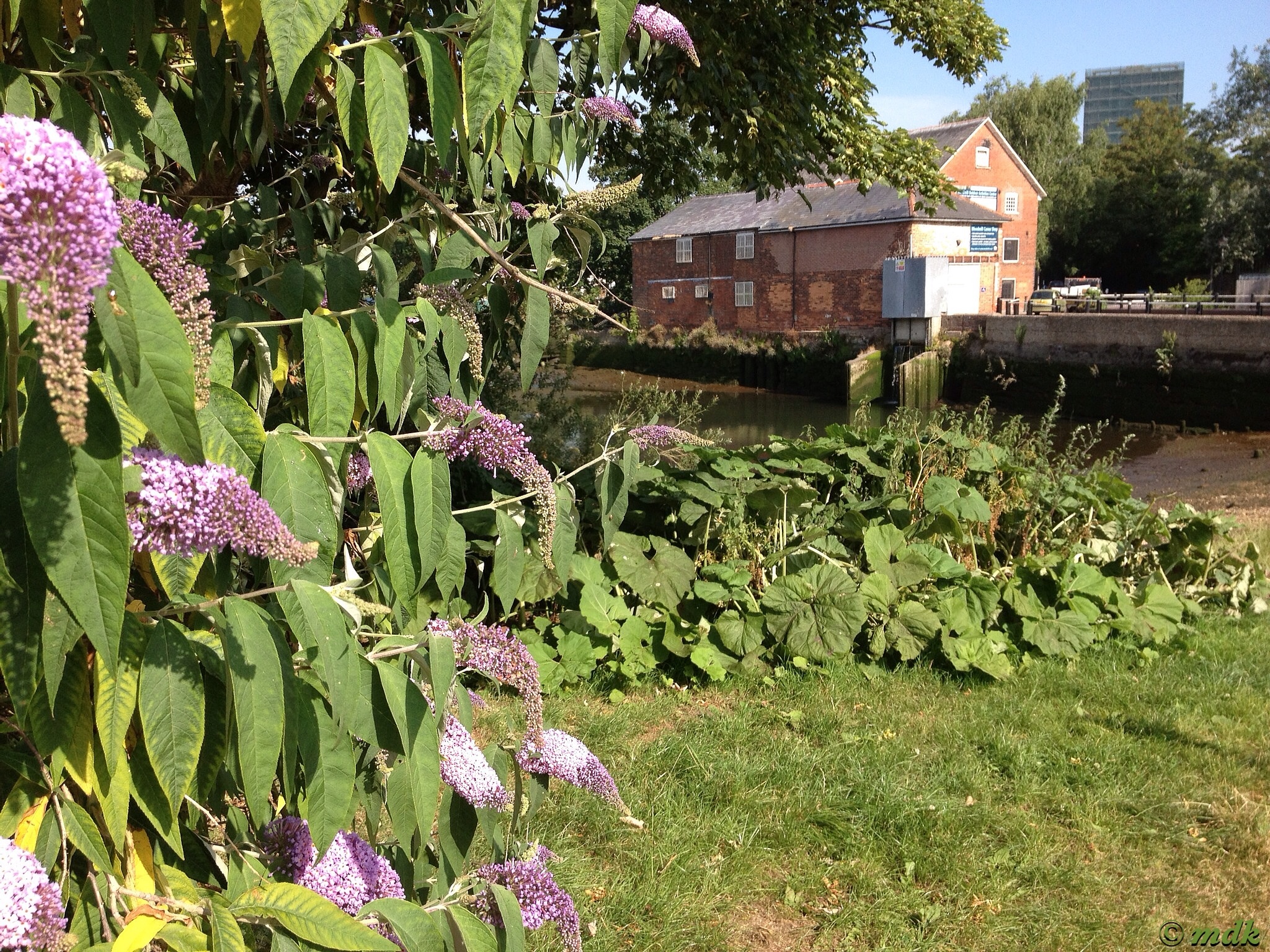 It was Satirday,  it was mid July 2013 and the plan for the day was to walk the Itchen Navigation to Winchester, find the Winchester rhino and get the train home. Obviously that meant an early start and the hope it wouldn’t get too hot before I got there. Not feeling too sure about that I packed my water bottle with ice and water and took my sunglasses as well as my glasses. Seeing properly is relatively important I always find. All in all I felt it was a good plan and I was fairly confident of success.

The river was more crowded than I’d expected for a Tuesday morning but I’d soon reached Woodmill where the budleia flowers brightened up the normal view. If anything it was even more crowded on the White Swan side of the river, fishermen setting up, mothers with pushchairs and a few walkers, mostly with dogs. There are some strange people about. One man had his dog on a long lead while it swam in the river beside him. I’ve never seen that before. Still, I don’t blame the dog for wanting a dip in the cool water, I could have done with one myself. Soon I was at the little bridge and then the sign for the start of the Navigation proper. 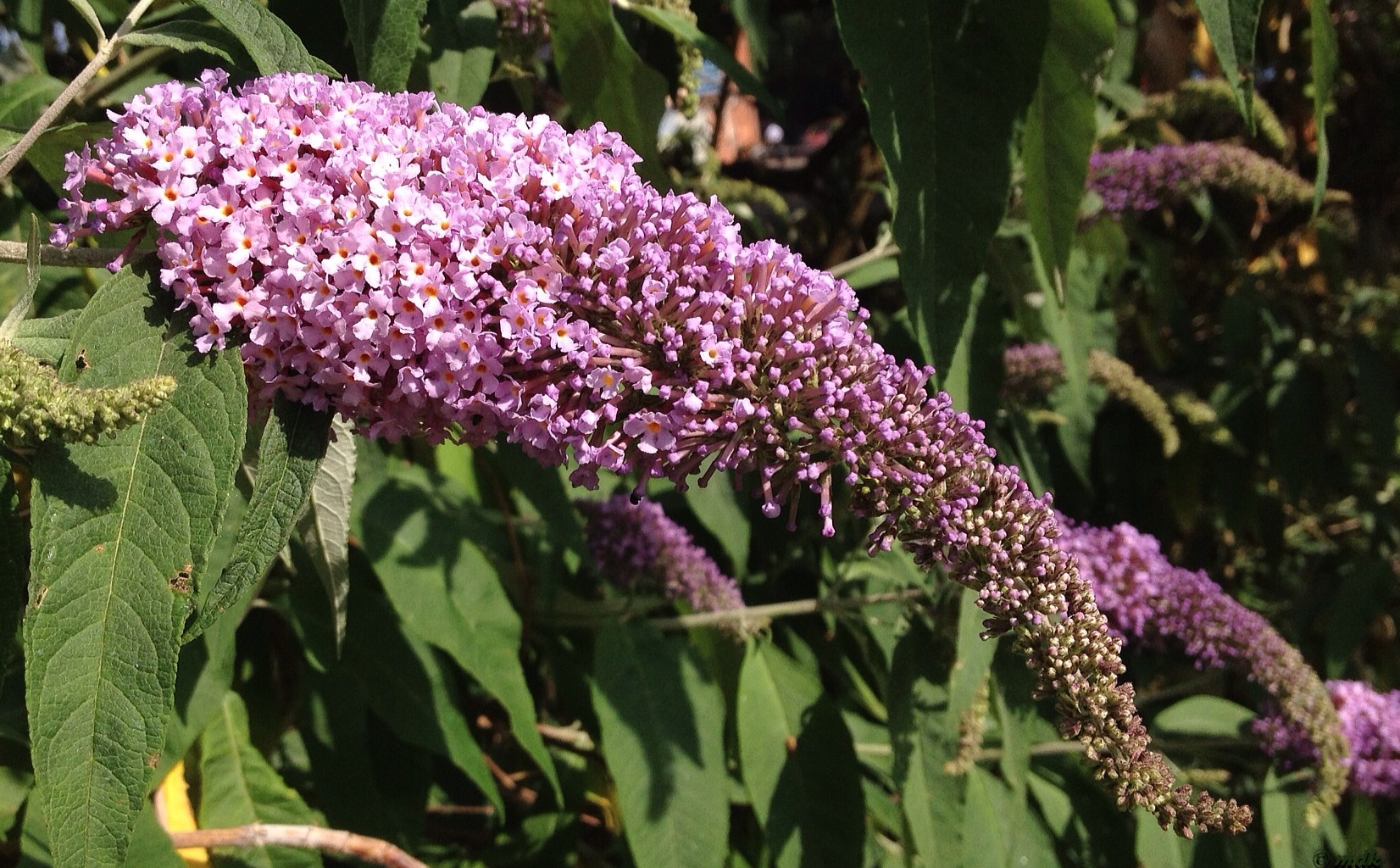 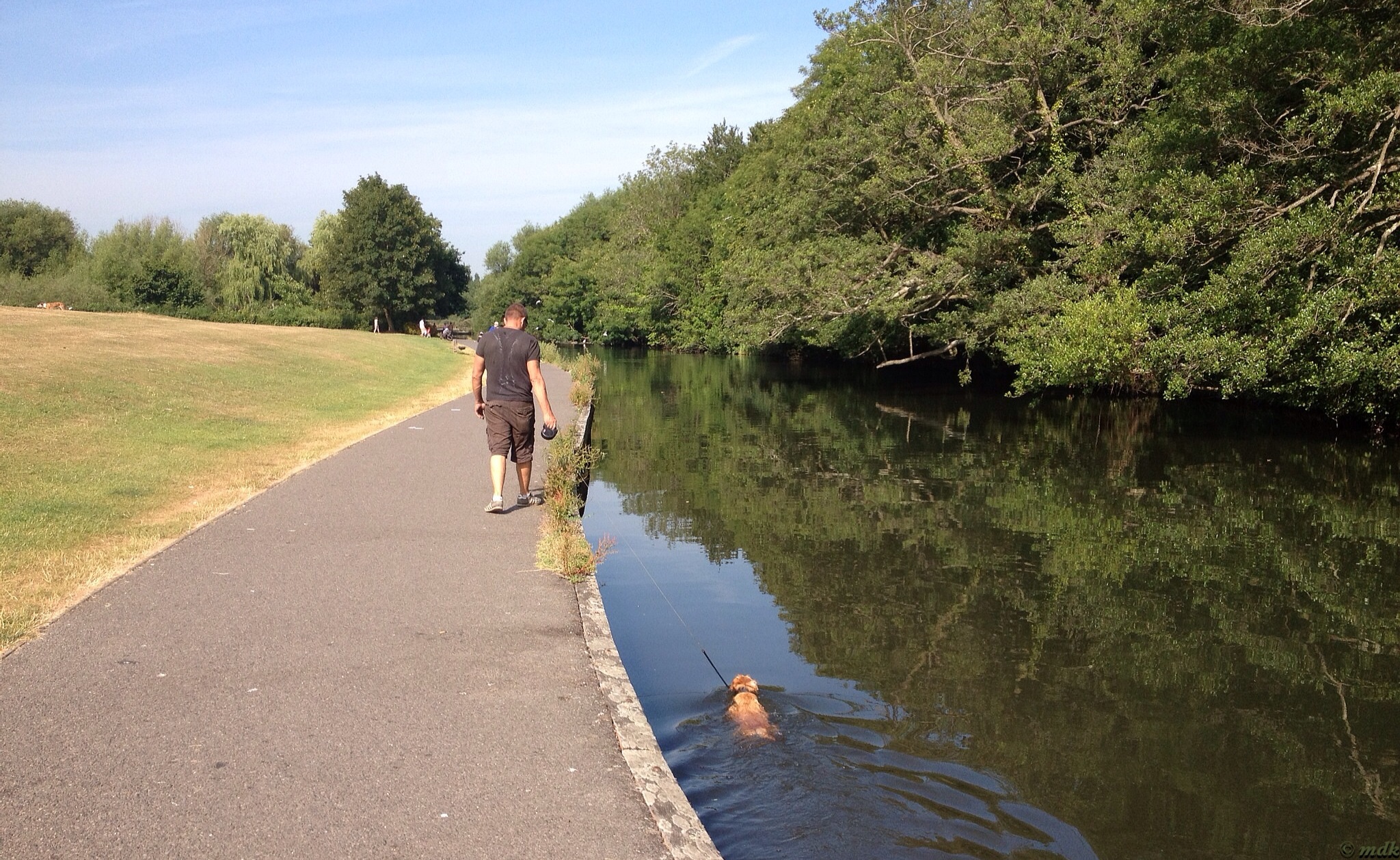 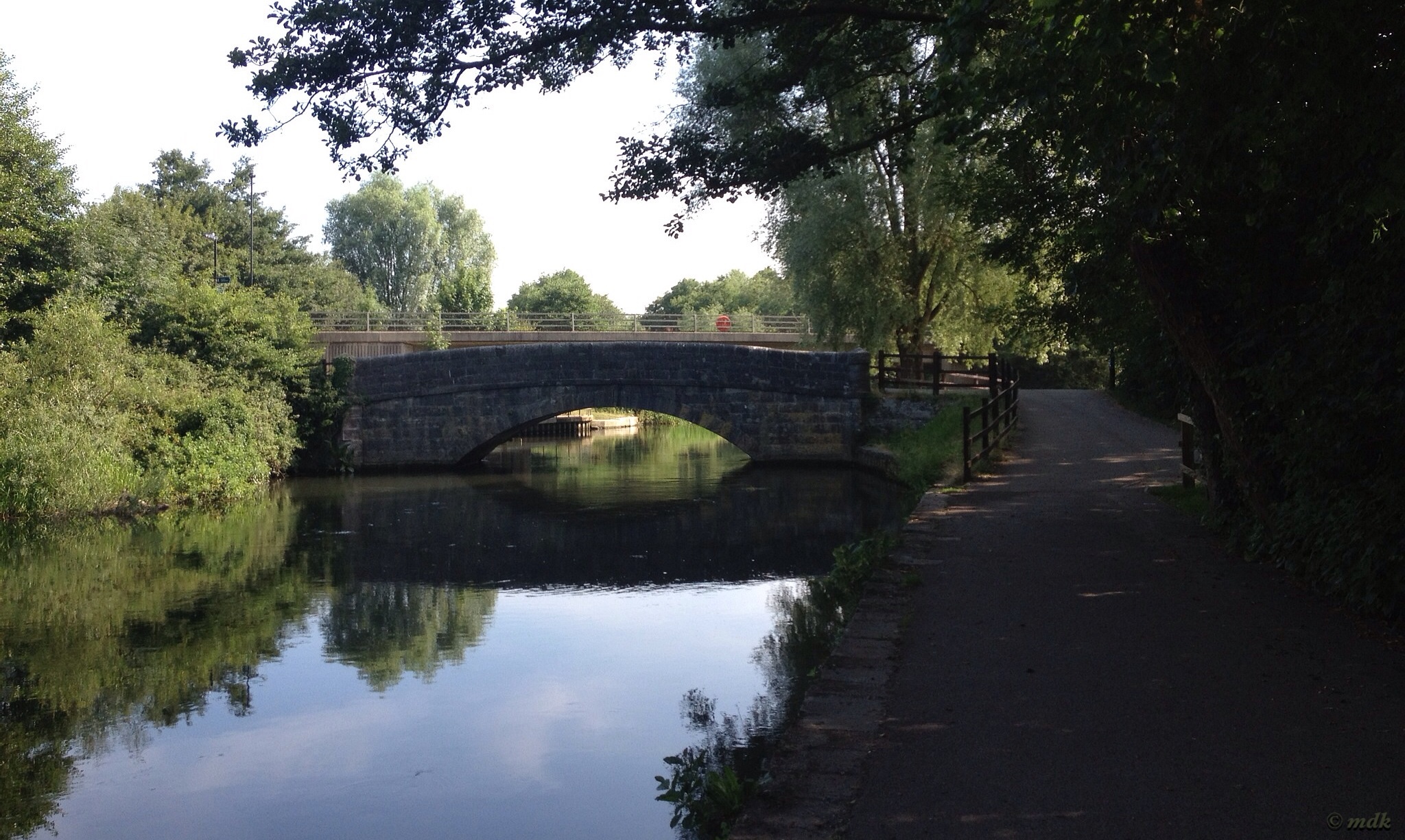 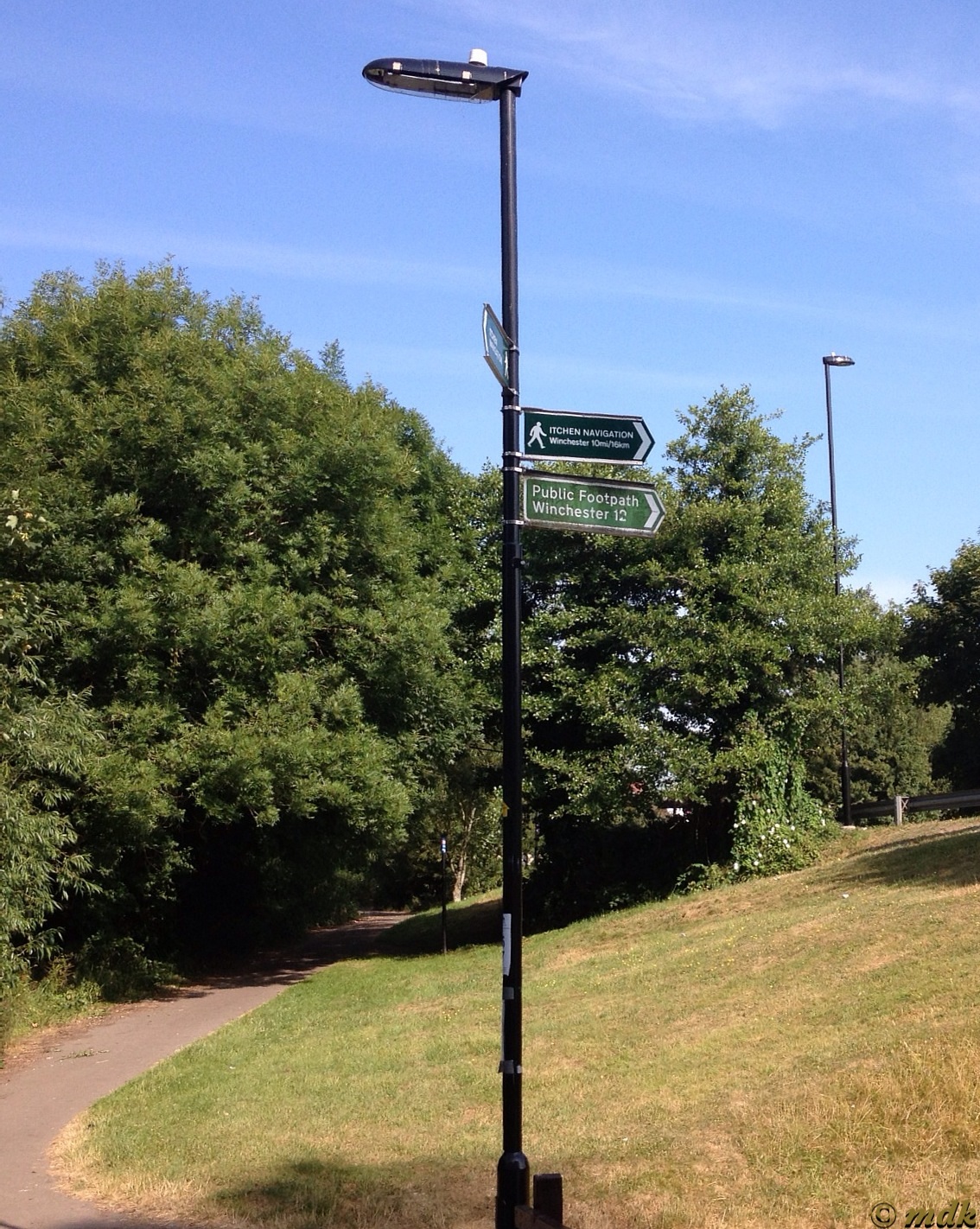 The powers that be have mowed the grass in a long strip beside the path along the first part of the trail. Even so it was like walking through a field of corn except it wasn’t corn, it was long, dry, flowering grass. Once again I was thankful I don’t suffer with hayfeaver. The noisy, boring bit of path alongside the motorway was brightened by mass of brightly coloured knapweed. Then I came to the bridge under the motorway and the view was stunning. The river stretched before me smooth as glass. After that it was the nettle path for a while. Those nettles crowd in on both sides and, once again, I had to walk with my hands held above my head to avoid being stung. 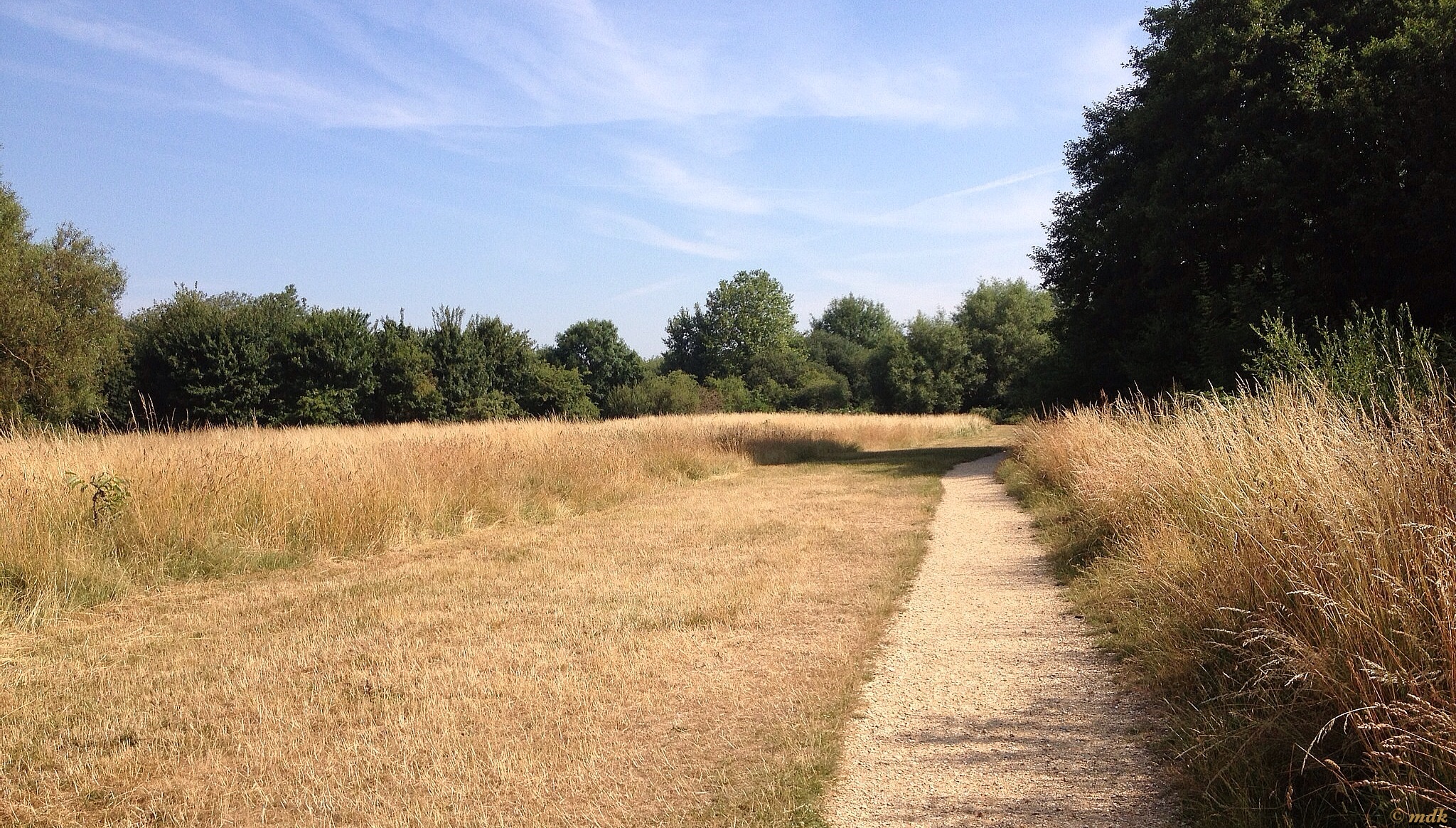 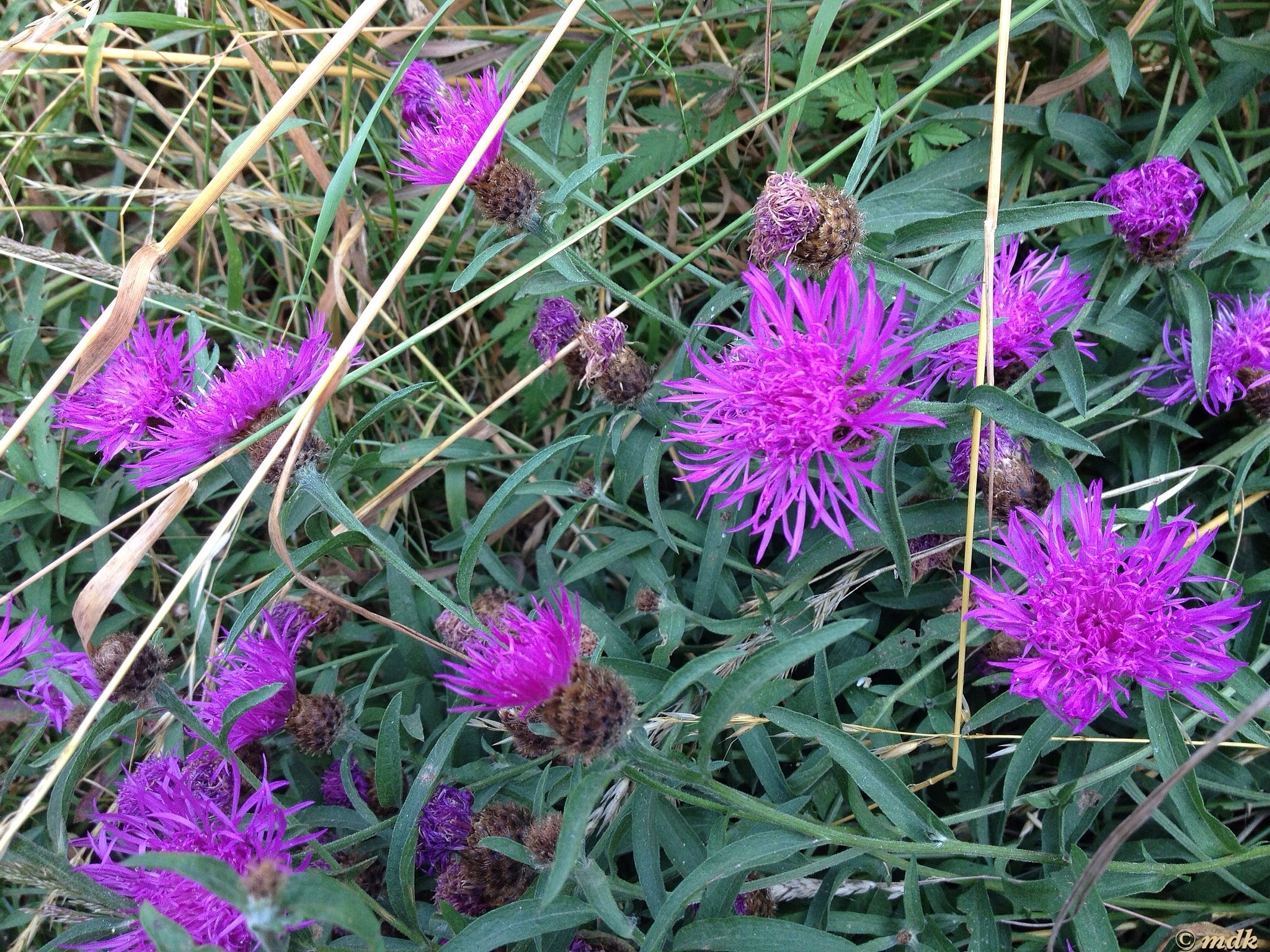 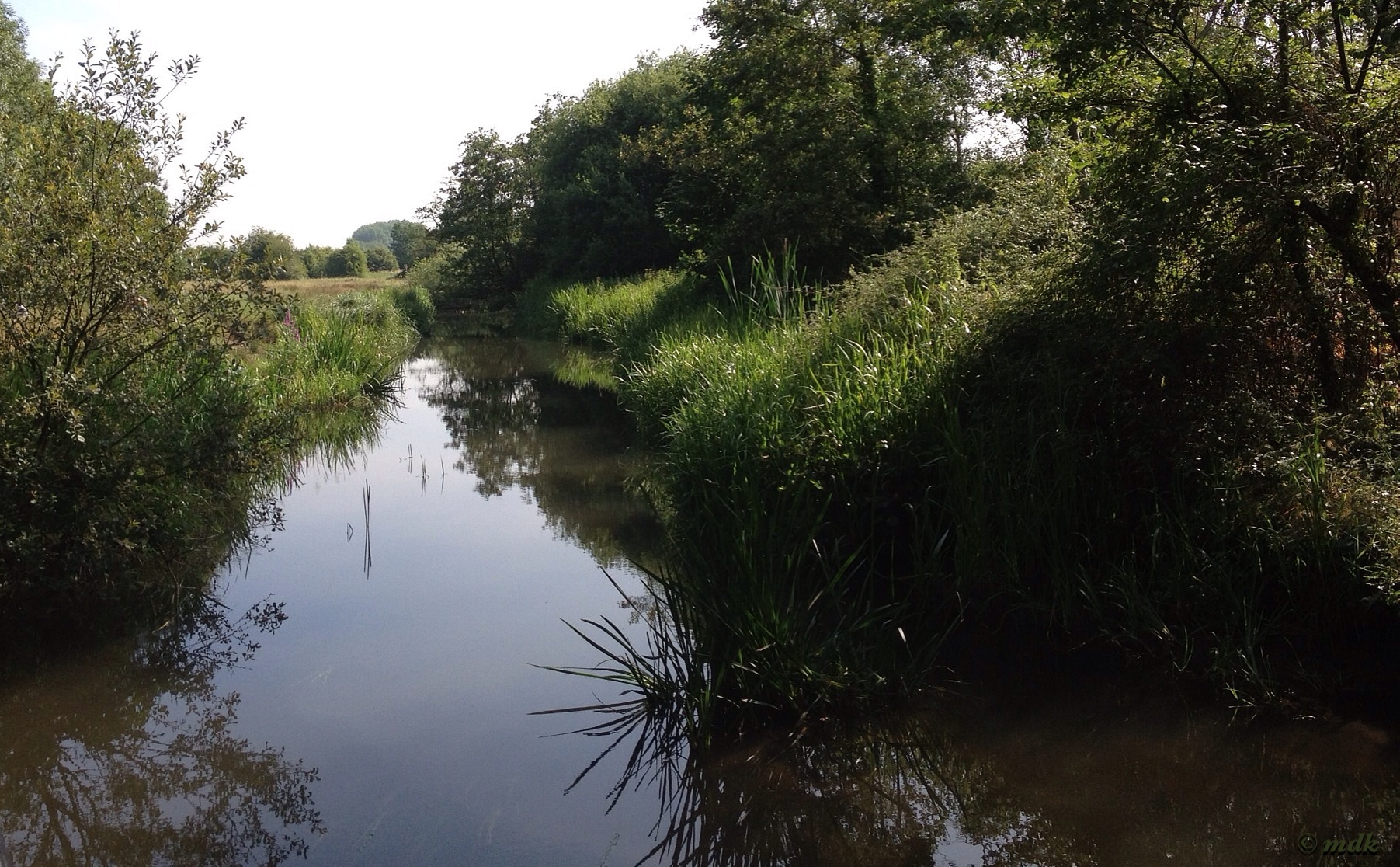 A little further on some council workers were hard at work cutting back the worst of the vegetation crowding in on the path. Part of me was sad at the loss of some pretty wildflowers that were undoubtedly going the same way as the nettles, the other part wished they’d got a little further before I came along. Still it was good to see they hadn’t cut down the burdock, which is just coming into flower. Apart from anything the leaves help with nettle stings, I picked one just in case. 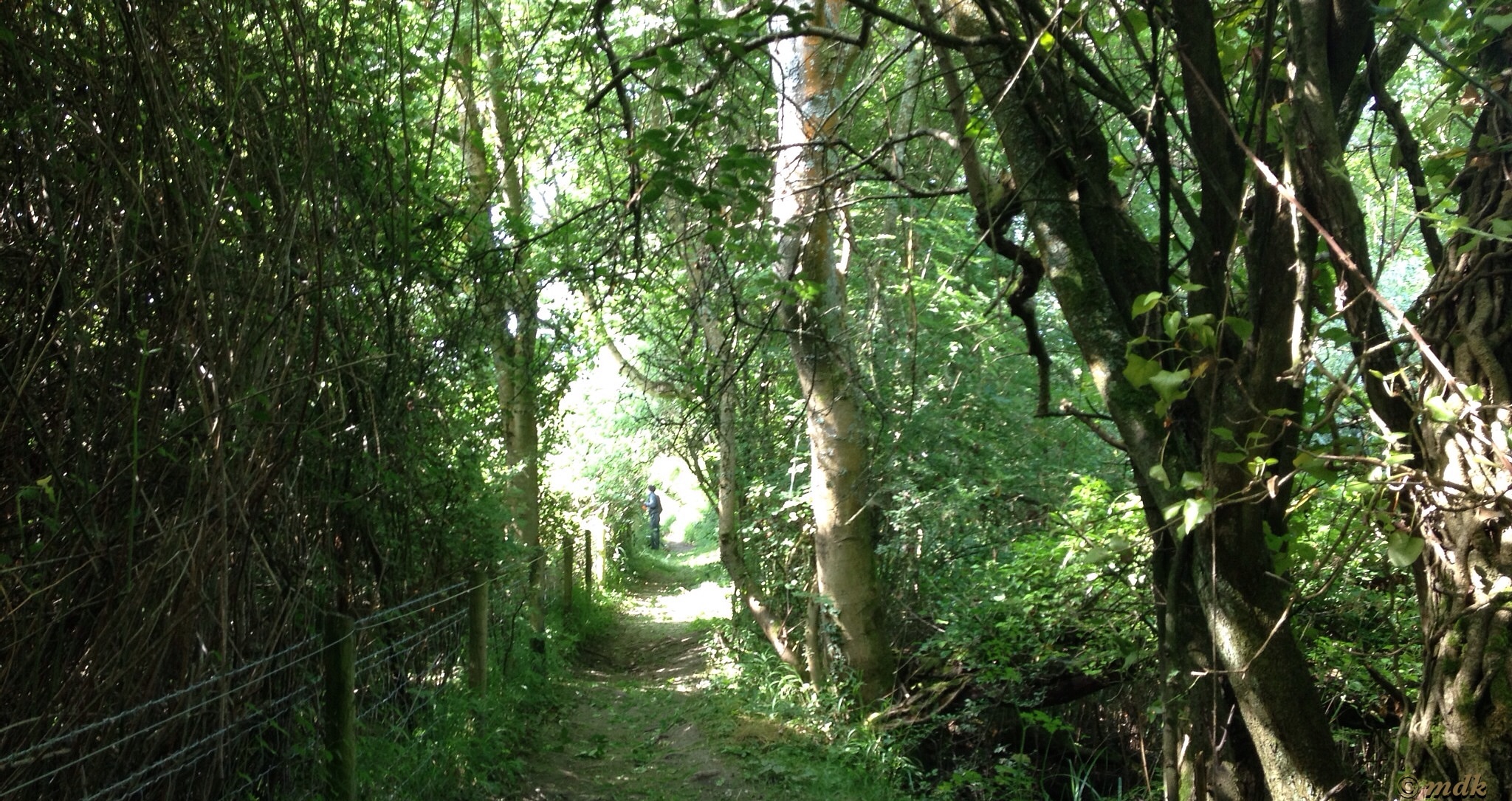 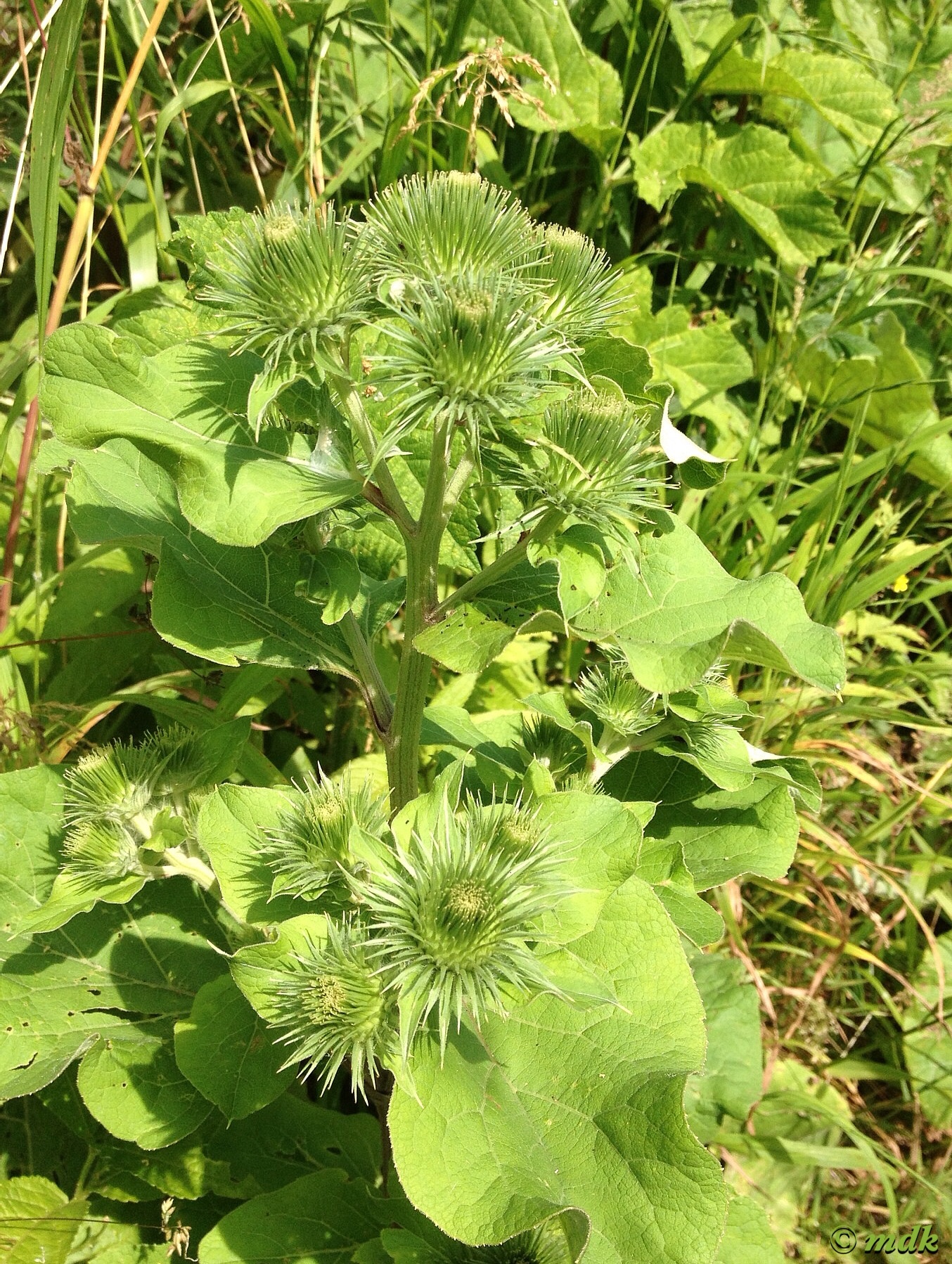 On the other side of the dodgy looking railway bridge there were cows huddled in the shade. Mostly they were black and white but there were two brown ones amongst them, one seemed quite interested in me and started to come towards the rather rickety fence. That was my cue to get moving. Thankfully there weren’t quite so many little flies as I passed the sewage works today. I’d expected lots, given the weather. Just after that I came to Chickenhall Lane, the track used by walkers and the odd farm vehicle where I’d almost got lost the first time I came this way. There was mayweed growing by the path there. 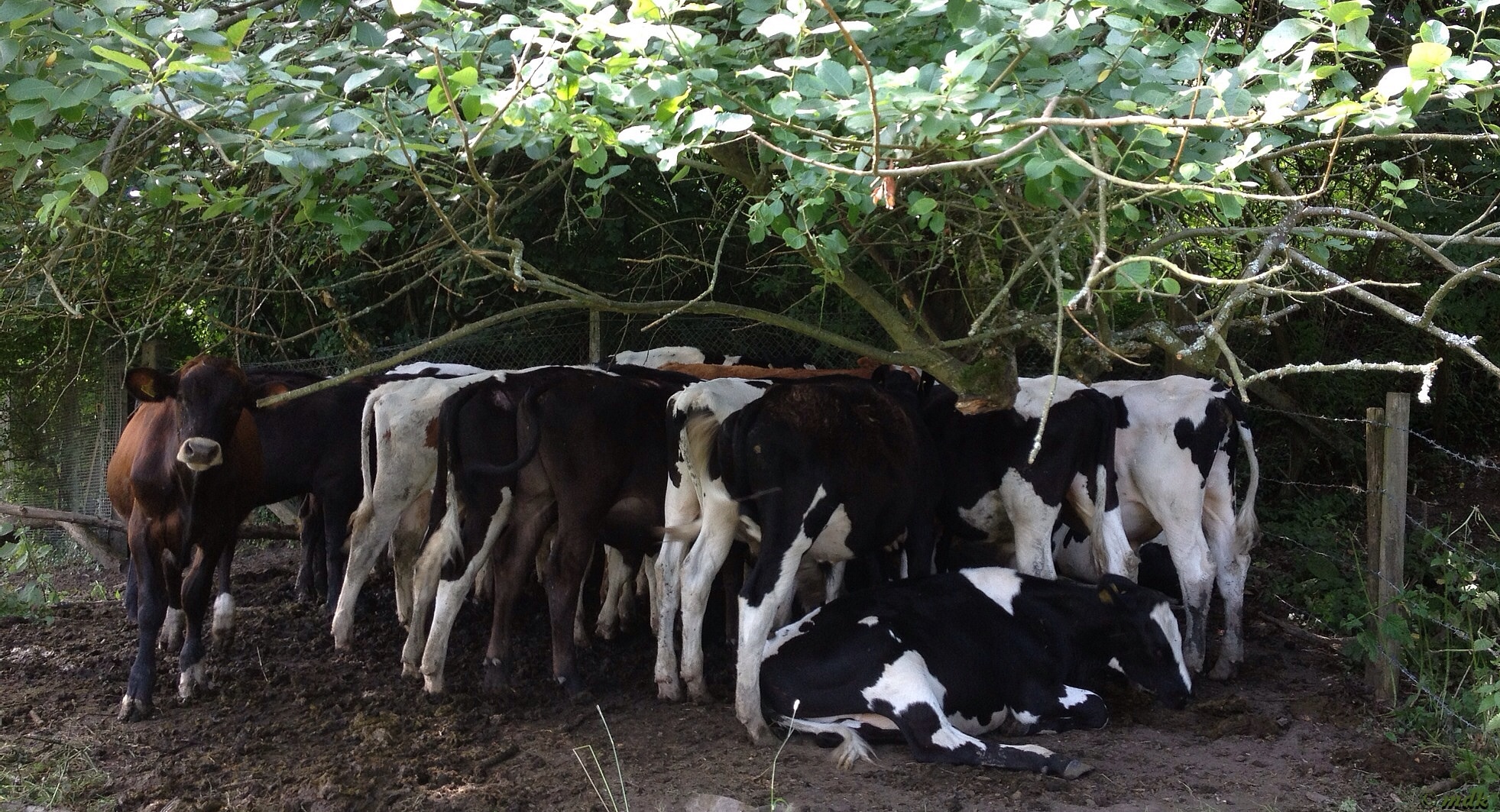 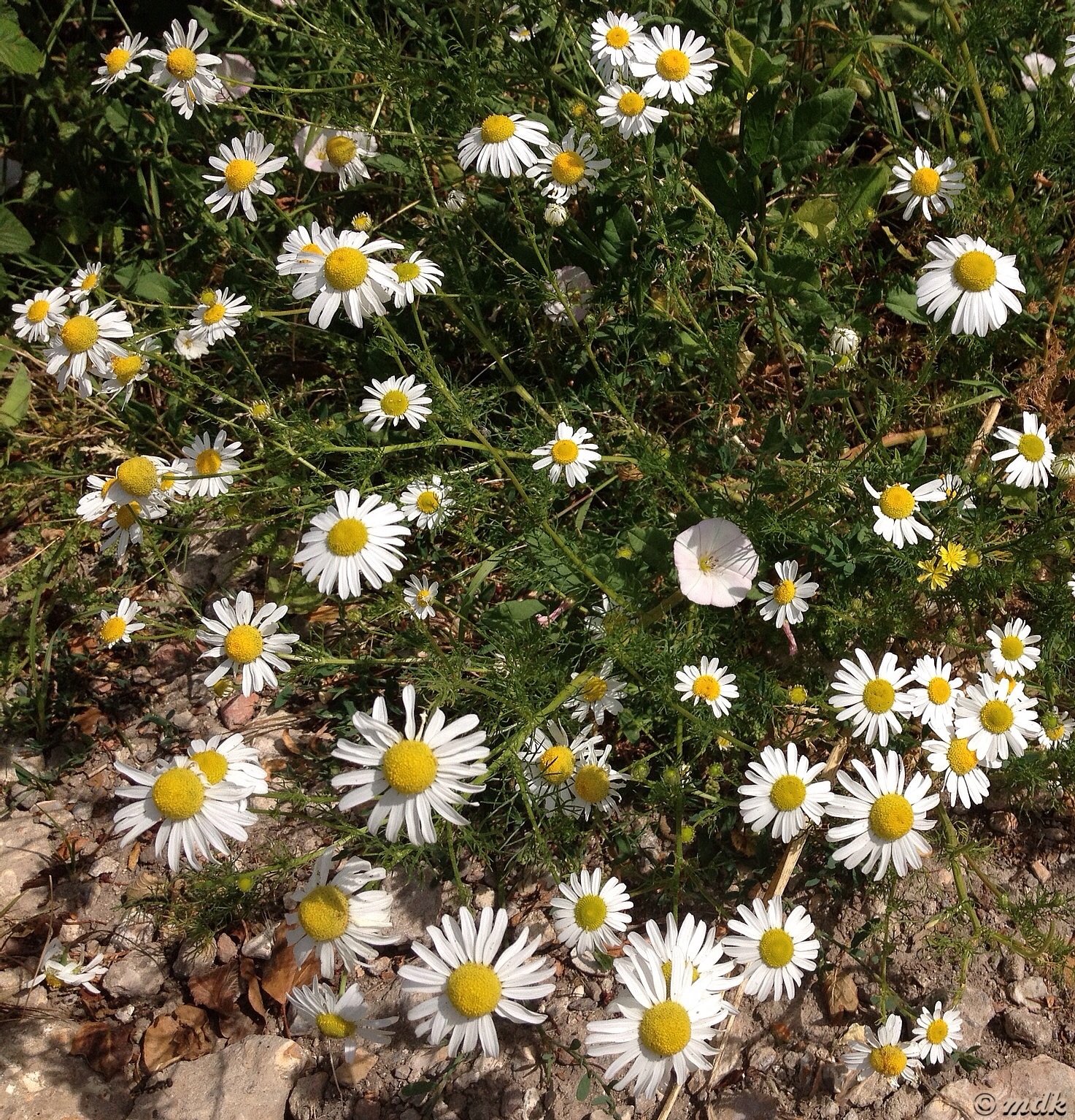 At this point I was a little undecided whether to follow Chickenhall Lane to the end or stick to the Navigation. If the Bridge was still out at Bishopstoke it would take me closer to the place where I could get back onto the Navigation but if I took that path I would never know if the bridge was fixed or not. In the end I stuck to the Navigation and hoped the bridge had been fixed. When I came to the ford a couple in swimming gear were standing on the side looking as if they were going in. The water was higher than I’ve seen it before and flowing very fast. Once I’d passed I stopped and looked back and, sure enough, the woman was walking into the water. It seemed a risky way to get cool as far as I could see. Still each to their own. 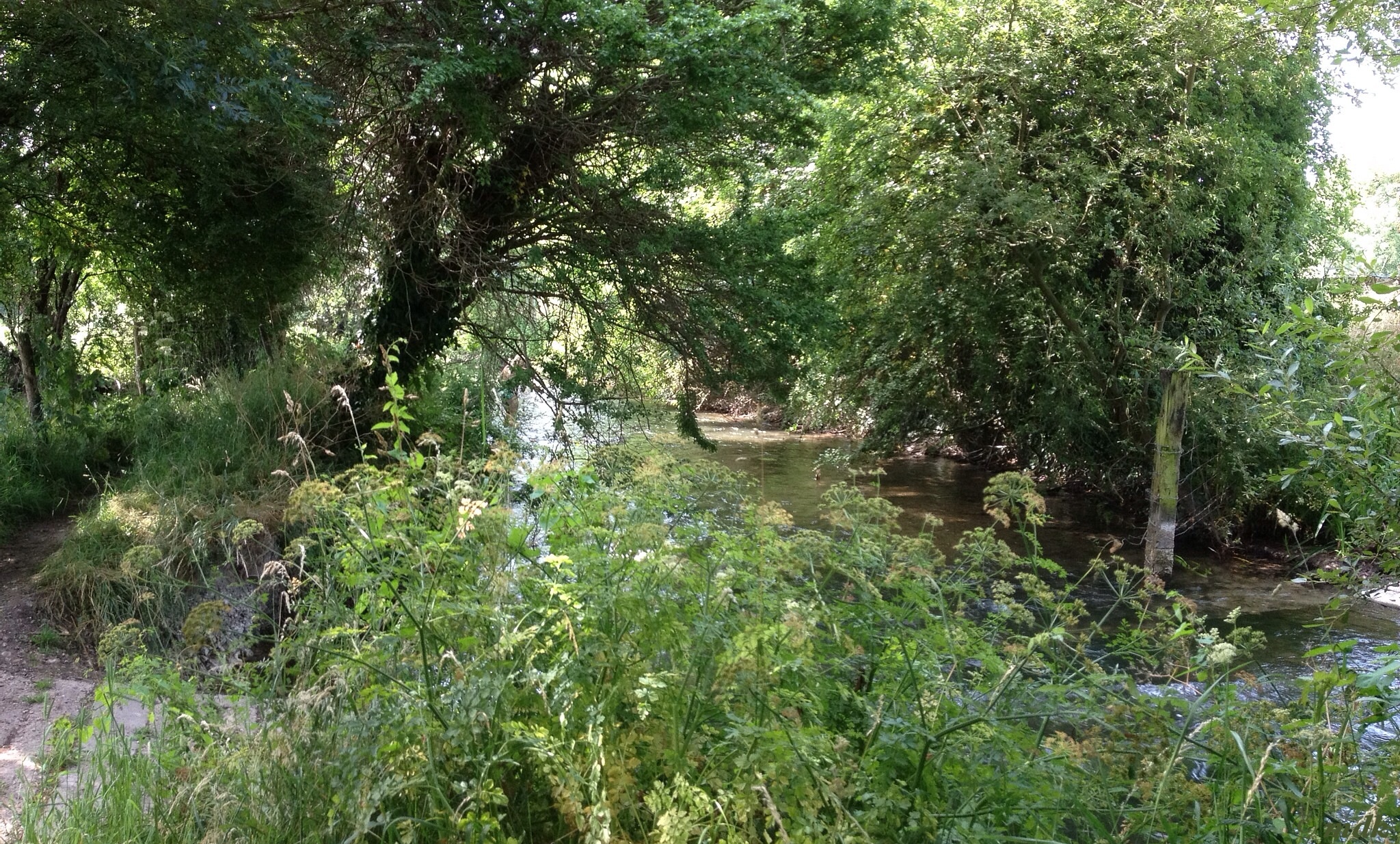 There were butterflies and dragonflies all along this part of the path. They taunted me by flying in front of me but refusing to stay still long enough for me to take a photo. In the end I gave up trying and concentrated on the things I could take photos of. Purple loosestrife was everywhere, lovely colourful spikes brightening up the riverbank. Better still it stayed still for me. 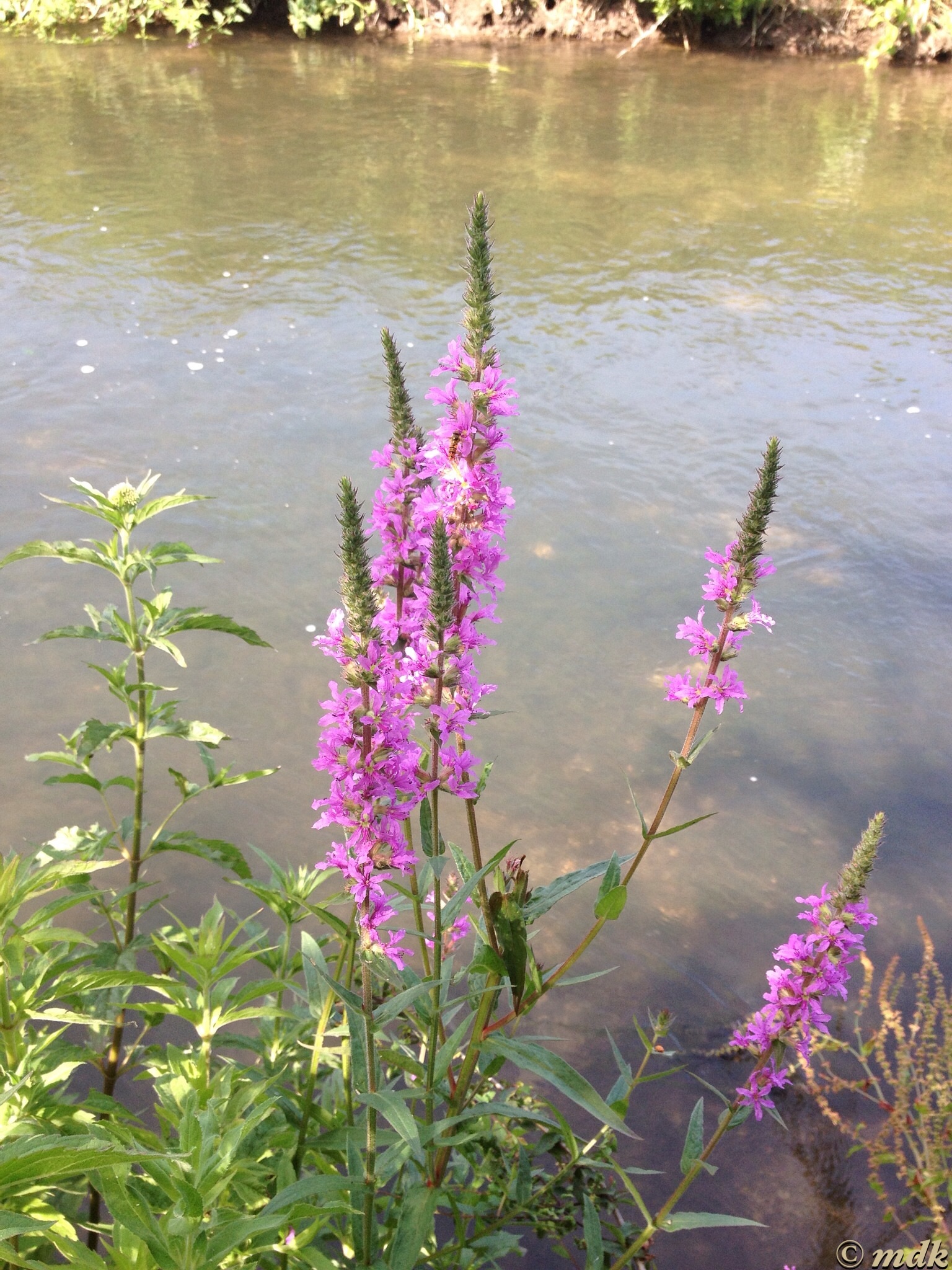 At Bishopstoke, I could see that the sign was still up, without even crossing the road. Of course there was a chance it didn’t say the bridge was still out but it’s tough to cross the road there and I was pretty sure there wouldn’t be a sign just to say the bridge was fixed. I carried on along Bishopstoke Road towards Eastleigh. After about a quarter of a mile I passed the end of Chickenhall Lane. Another quarter mile and I was crossing the railway bridge, looking down at all the tracks and Eastleigh, a town built up around the railway. Then I was at the big roundabout where Twyford Road begins. Back to familiar territory, the Rapunzel church and the little railway bridge. 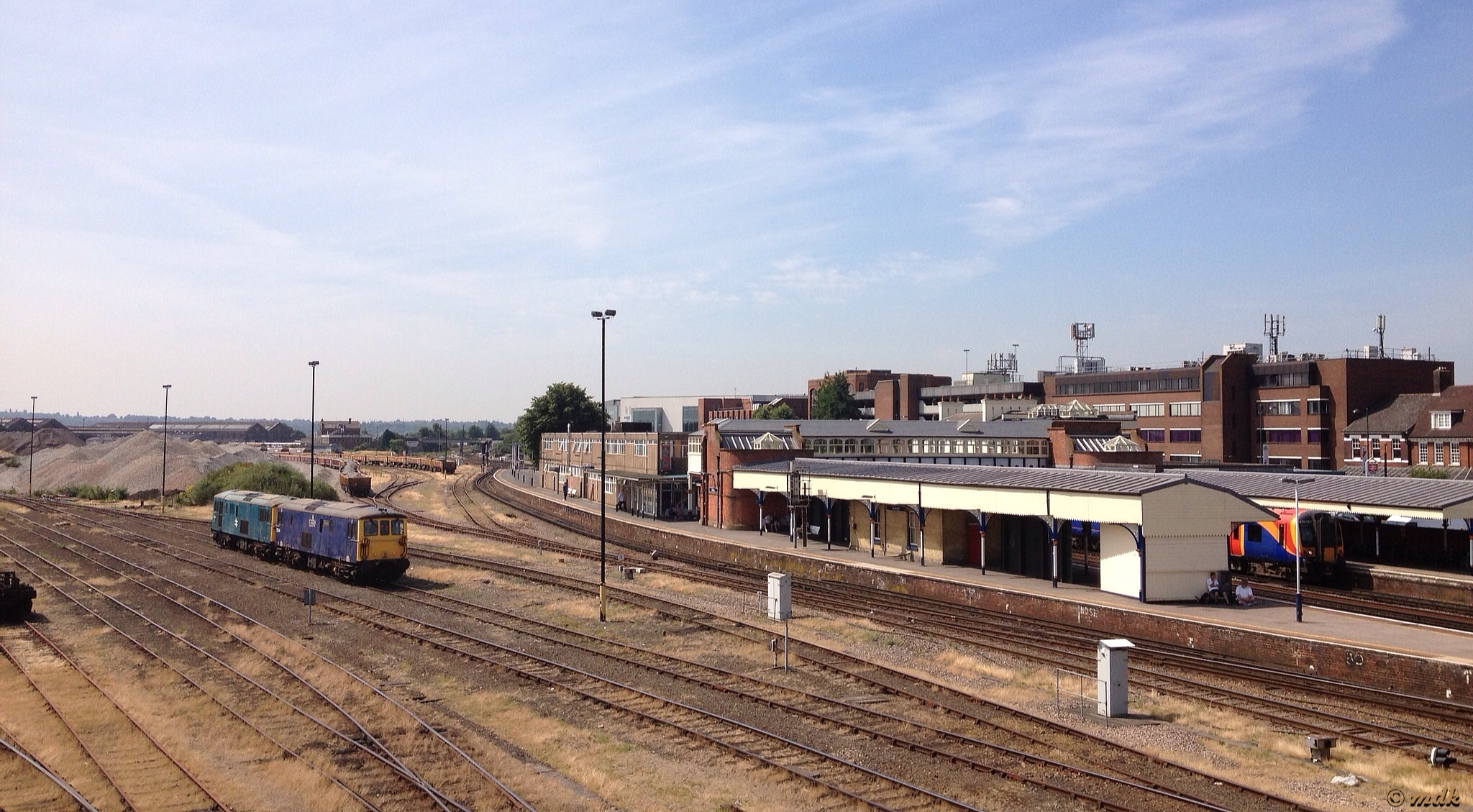 As I walked I drank my first milkshake. Away from the river it was hotter than ever and I was beginning to feel quite drained, a few calories were just what I needed, especially as I was coming up to seven miles. About two thirds of the way up Twyford Road I came to the footpath that would lead me back onto the Navigation. At least I hoped it would, if not I was in big trouble. The path was wide and leafy, made up of some kind of grey gravel chips, along with hard packed dirt. What a relief to see the bridge at the end of it, the pylons I used to see from the bottom of Allbrook Hill in the distance and, better still, the signs for the Navigation. From the satellite maps it looked like the route was passable, but until you actually get there you never can tell for sure. There was another sign here about the vandalised bridge, this one says it will be closed until 5 December, or until the bridge is fixed ‘whichever comes first.’ That doesn’t sound too promising then. There will be no walks along the whole Navigation this year. 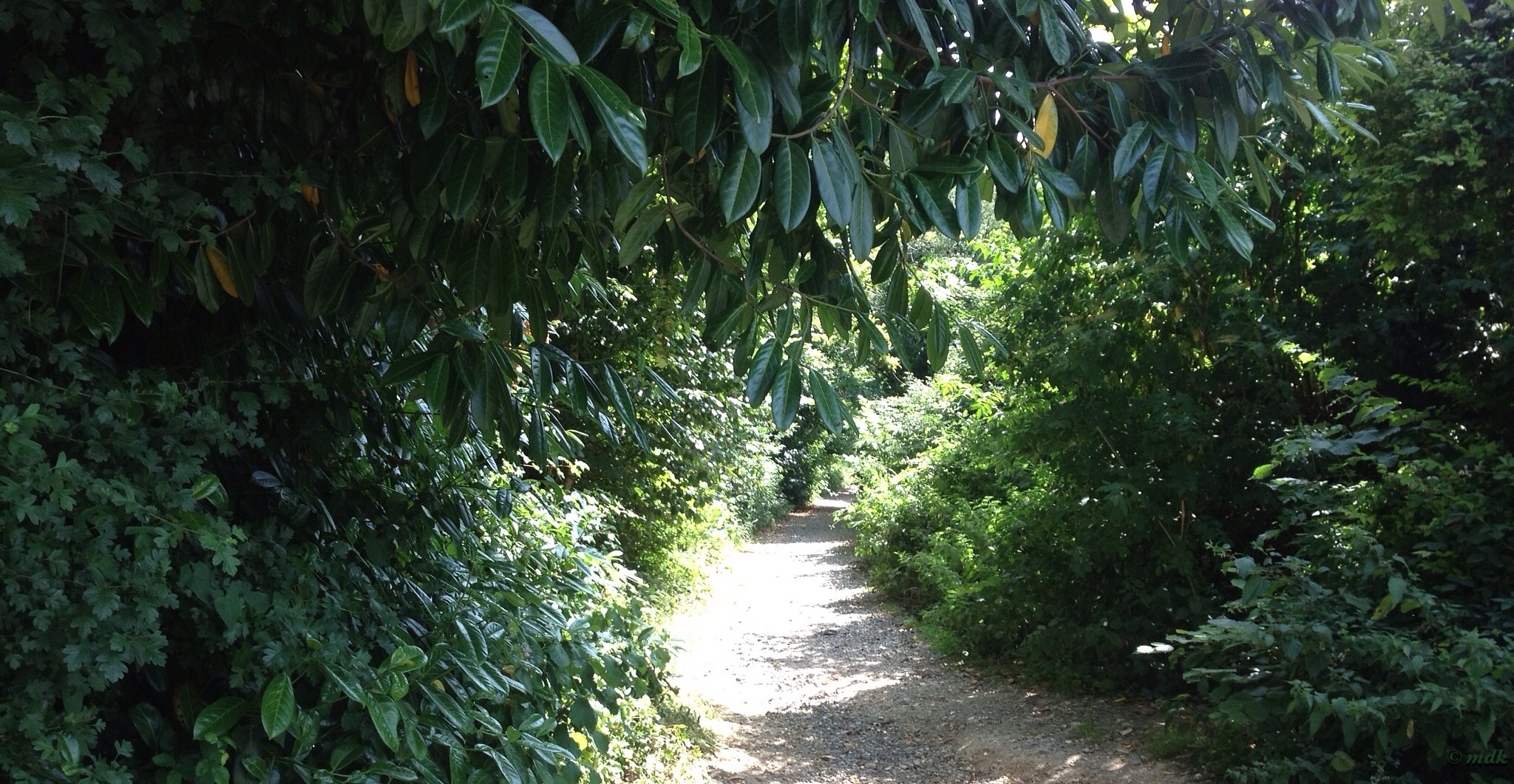 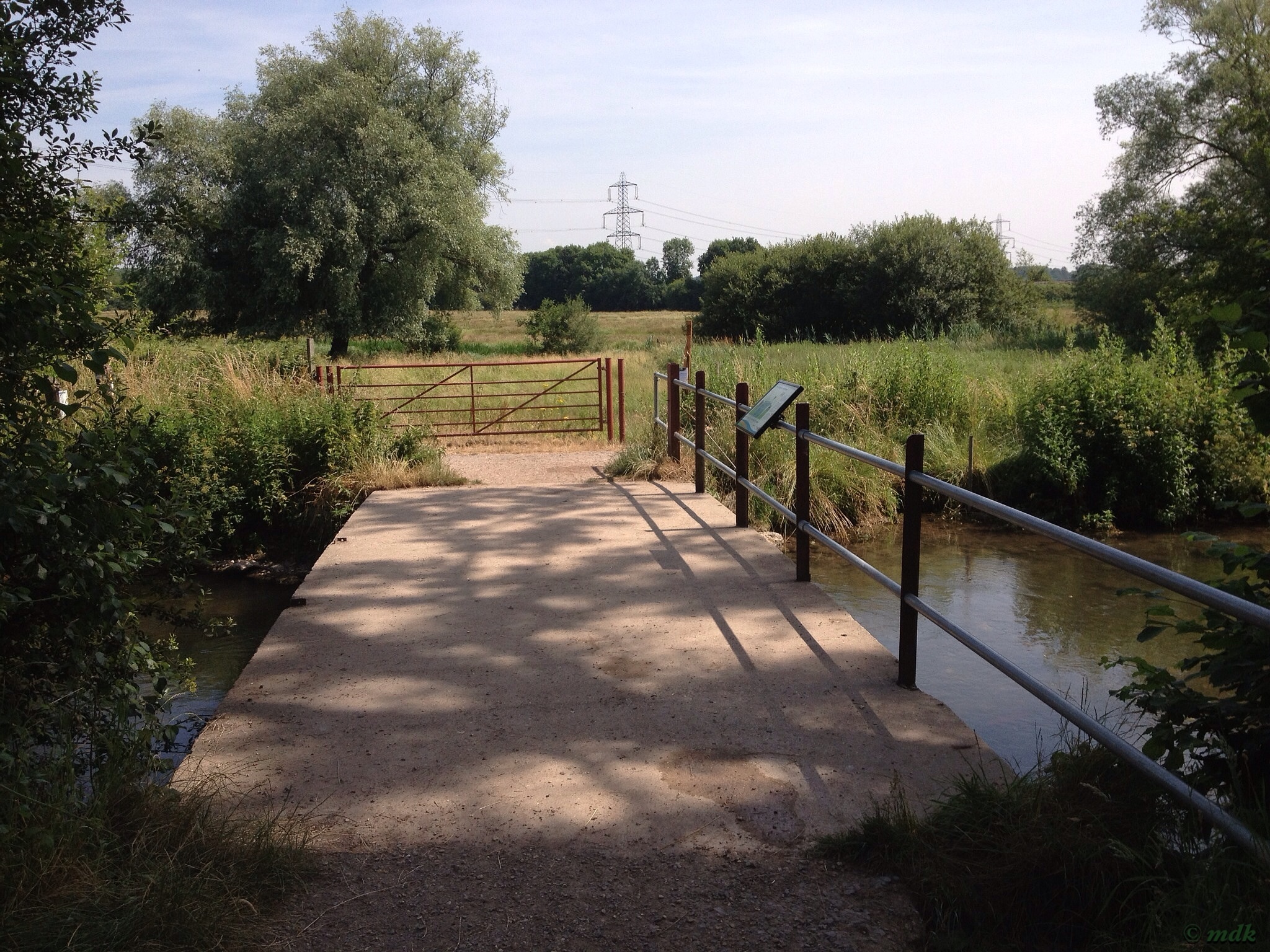 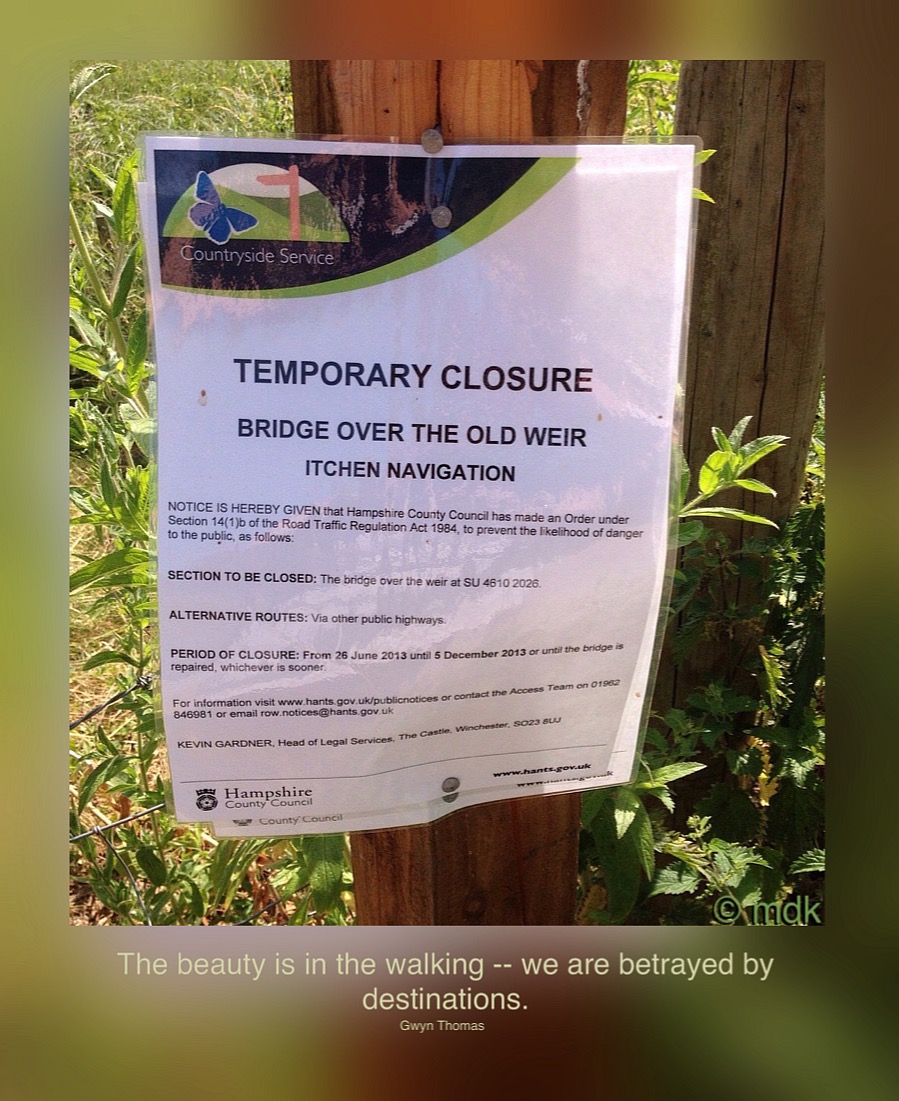 There were houses on the opposite bank, big houses with gardens sloping all the way down to the river. I guess these are the big houses along the top of Twford Road. Just imagine having a house like that! After about half a mile of following this rather well kept path, I came to a railway bridge and gathered I must be fairly close to the bottom of Allbrook Hill where I usually go under the railway bridge onto Highbridge Road and the long, difficult road across Twyford down. 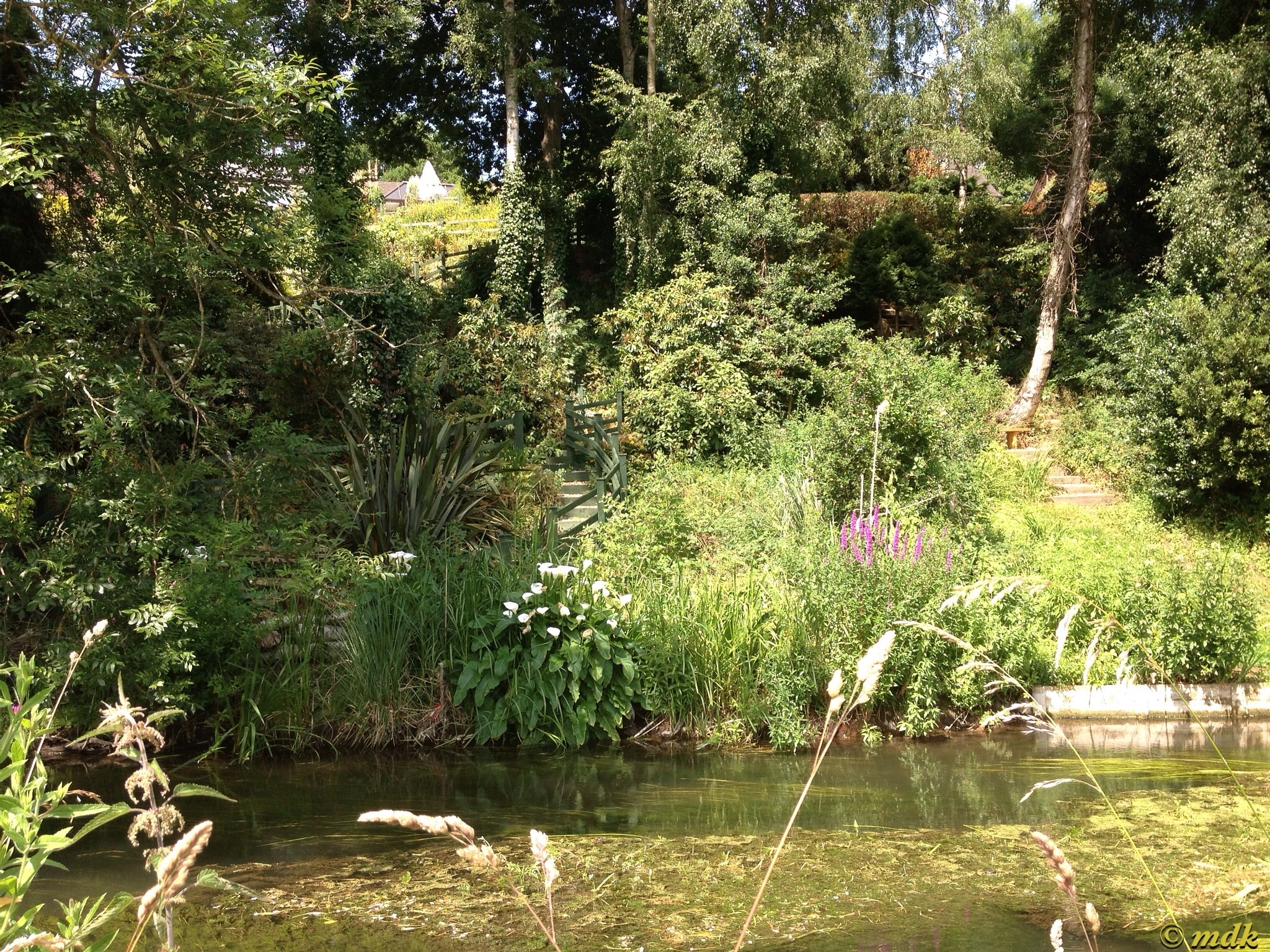 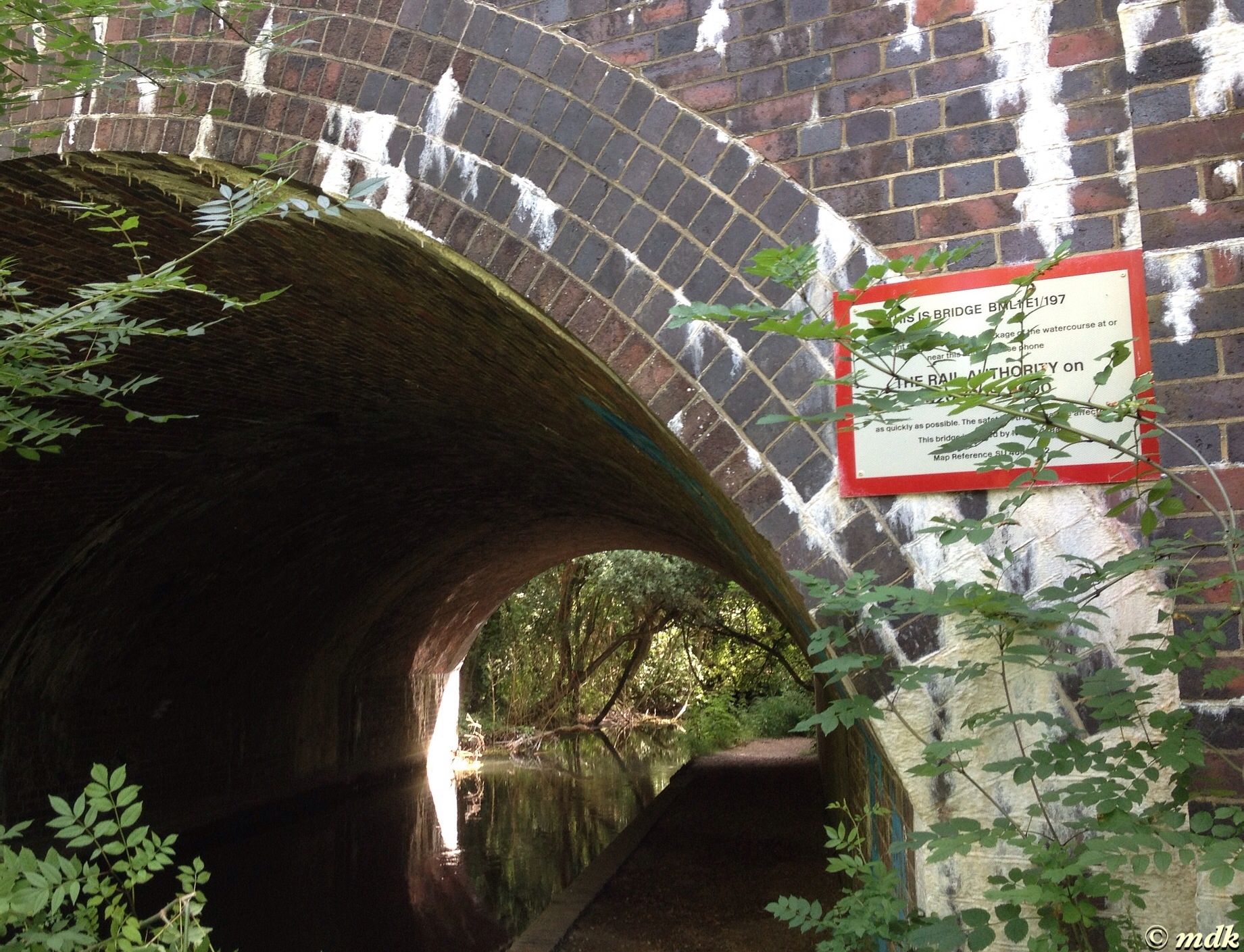 When I came out the other side I could see the field with the big pylon I passed every time I walked this way. This is close to where I saw the goats in trees a while back and thought I was going mad. Almost at once I came out onto the road at the bottom of Allbrook Hill. Given how steep that hill is I was surprised that I’d been walking on the flat all this time with no sign of an incline. I was also a bit cross with myself for not finding this path before, think of all the long, tired slogs up that hill I could have avoided! 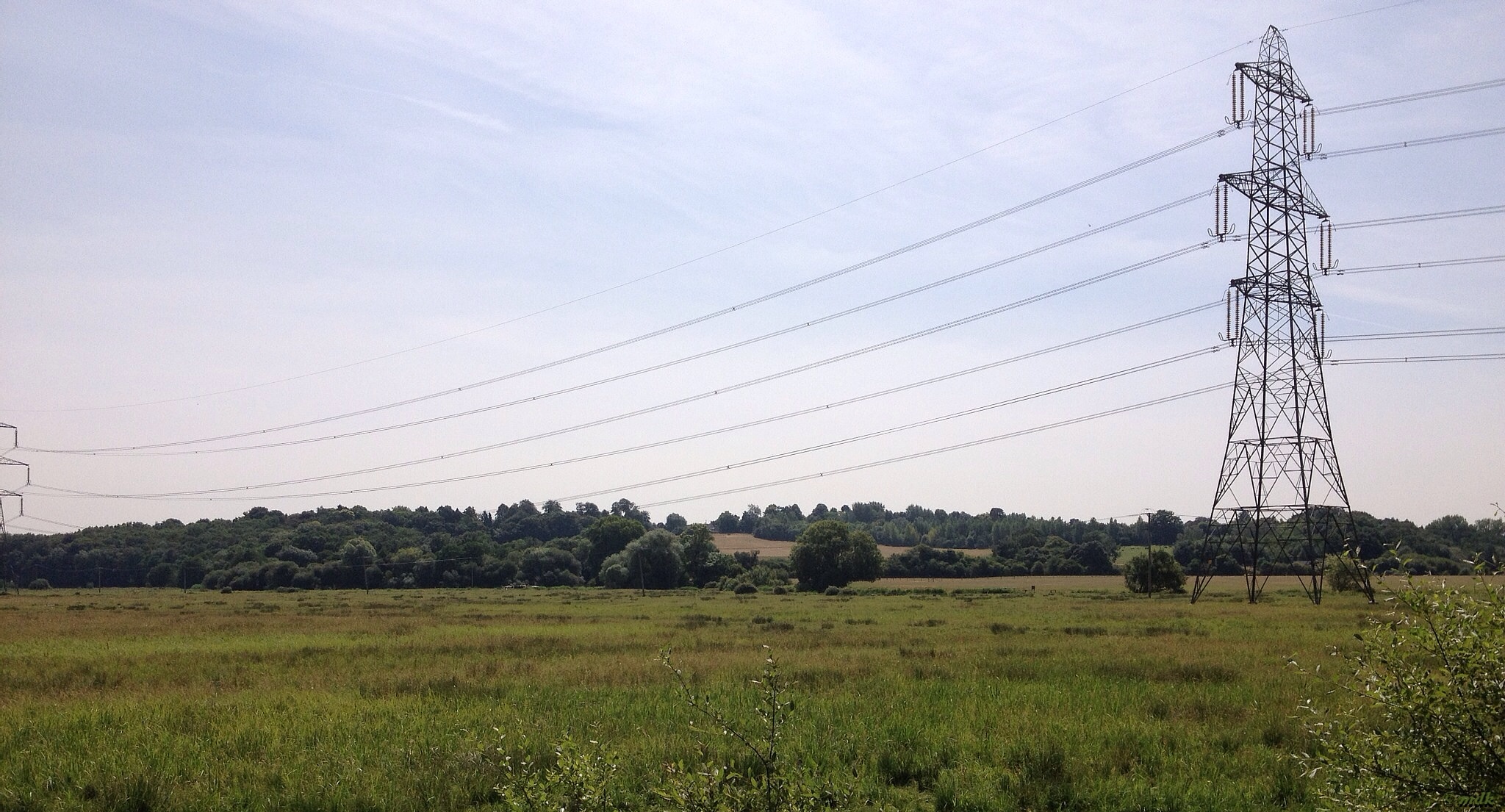 Once again I knew exactly where I was what I didn’t know was where I was going. My uncertainty was compounded by a sign as I joined the Navigation again on the other side of the road. This one said the footpath was impassable due to a bank collapse. It also said ‘ford key lost.’ At the time I assumed this was some kind of key to a ford crossing the river, now I’m thinking it might mean a car key. There seems to be rather more signs than strictly necessary if you ask me and none of them really told me how far along this was or if there were alternative routes. One sign said the way would be closed from 10 July for twenty one days. Somehow that sounded familiar. What to do? I could take the Twyford Down route that I knew so well and I’d get to Winchester just fine. The whole point to this walk though was walking the Navigation. 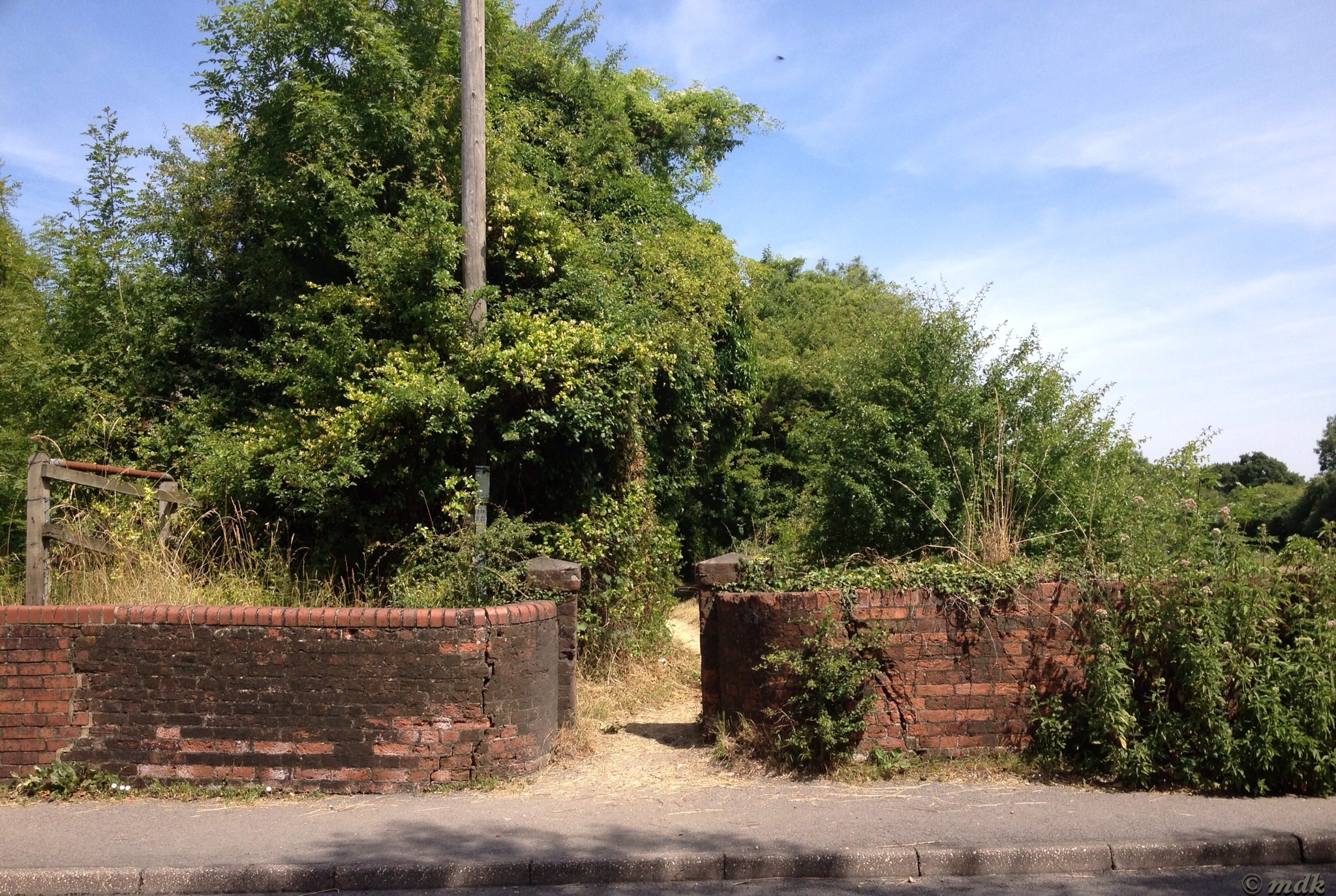 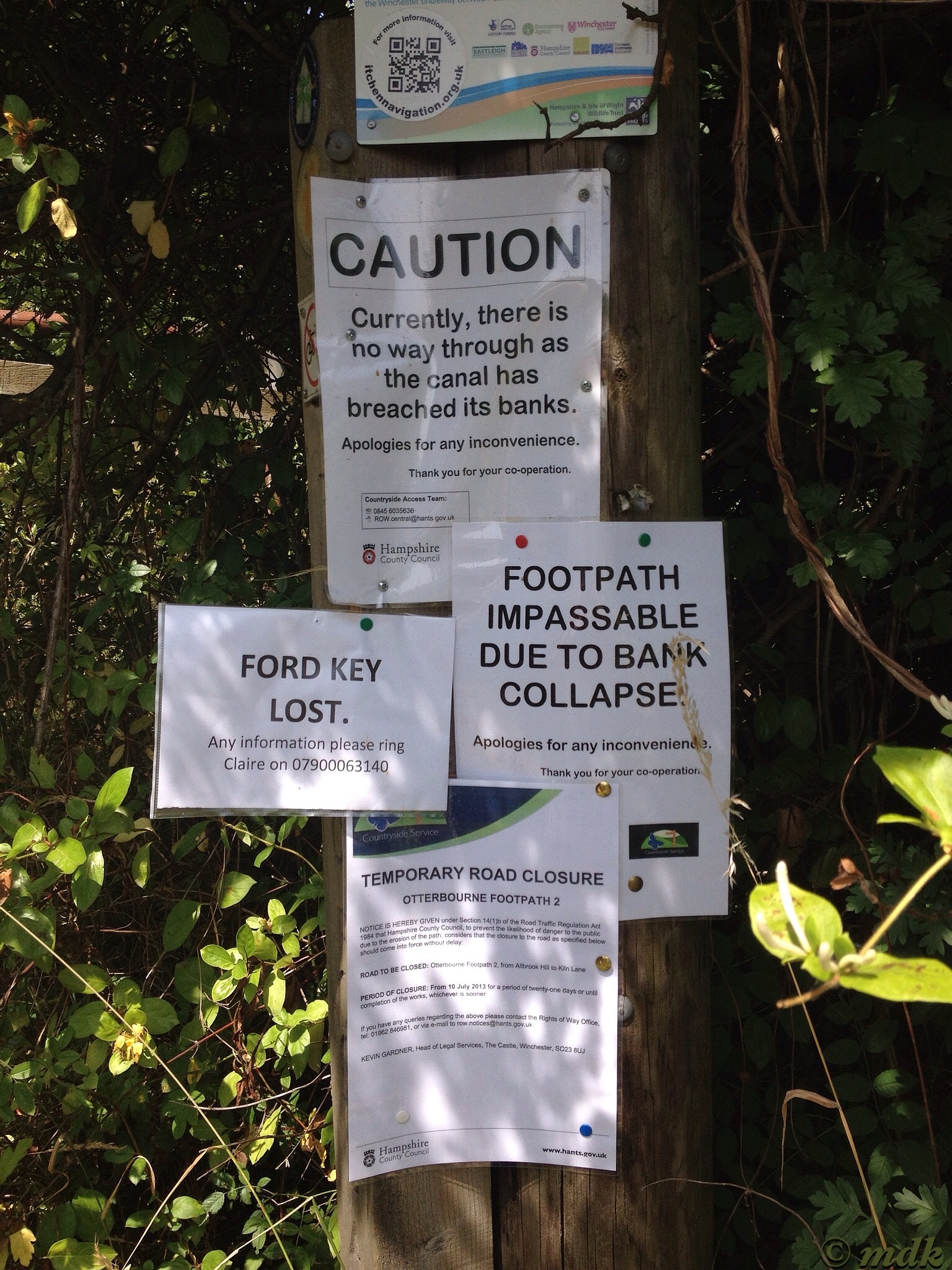 While I was standing there trying to decide several people came off of the path that was supposedly closed and walked past me. Maybe I should have stopped someone and asked, but if they were coming off it surely there was a way through? In the end I decided to walk it and see what I found. What was the worst that could happen?