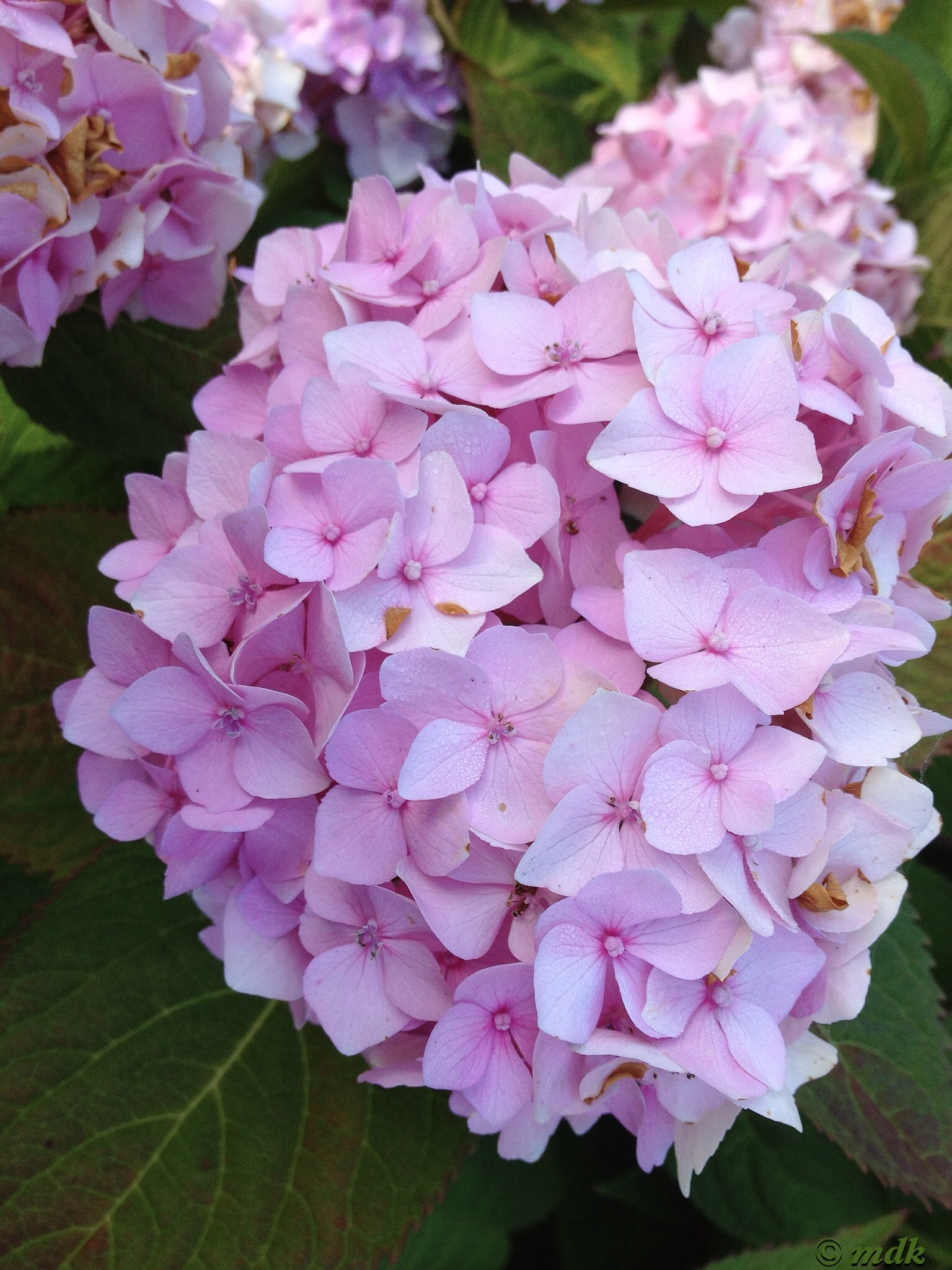 At the end of a busy day the last thing you want to see on the way home is a huge plume of smoke ahead between you and home. That is exactly what happened on the evening of 26 July 2013 as Gail and I were heading for the Itchen Bridge. By the time we realised what was burning it was too late to turn back. We’d just have to find a way around it if we could.

It was slightly drizzly again this morning, not so much you could call it rain as such but I was feeling exhausted after the turnaround. The bus came down the road just as I came to the bus stop and, as it stopped … Well you know what happened. At least it gave me a chance to have a little look at the enchanted park. 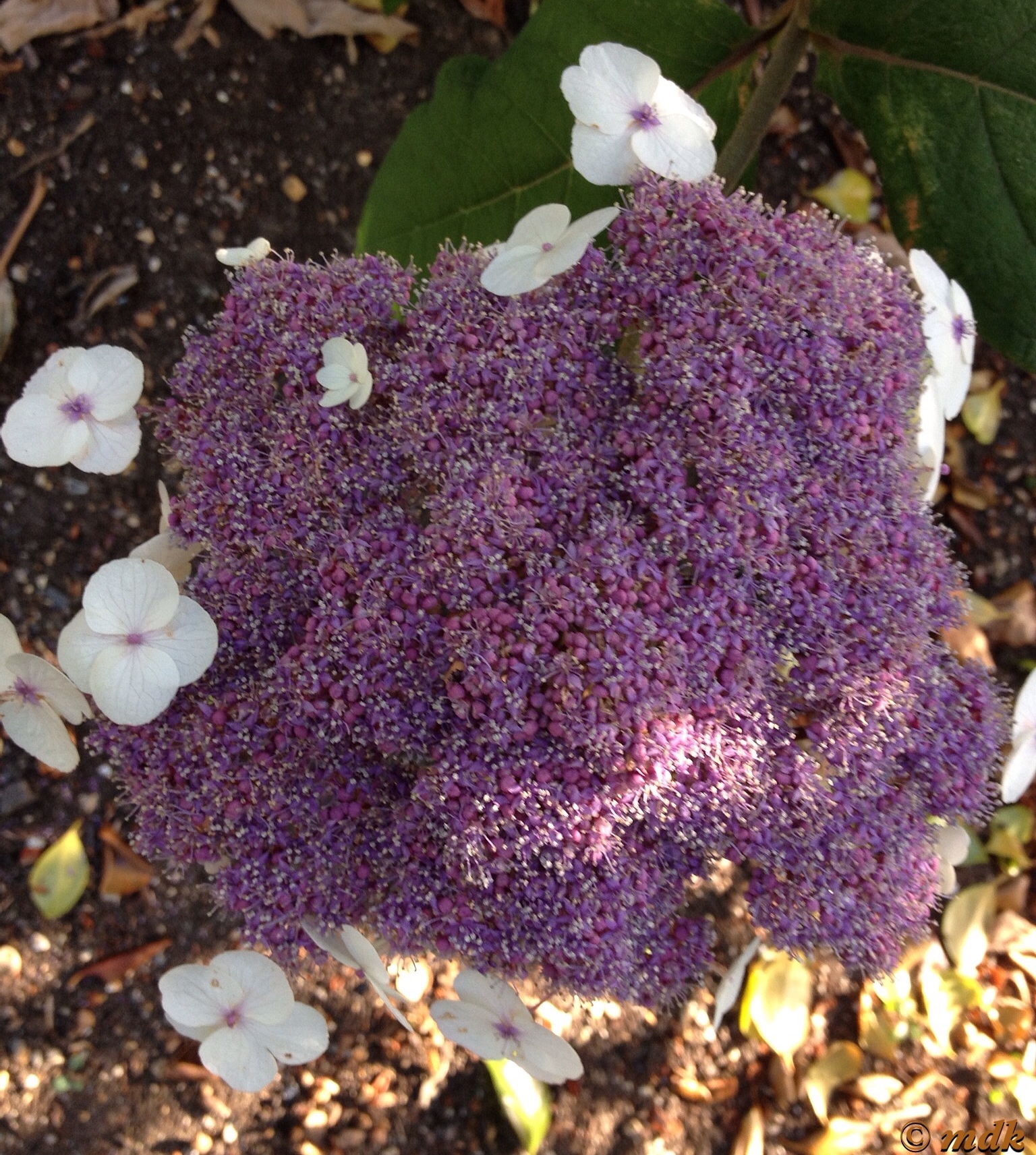 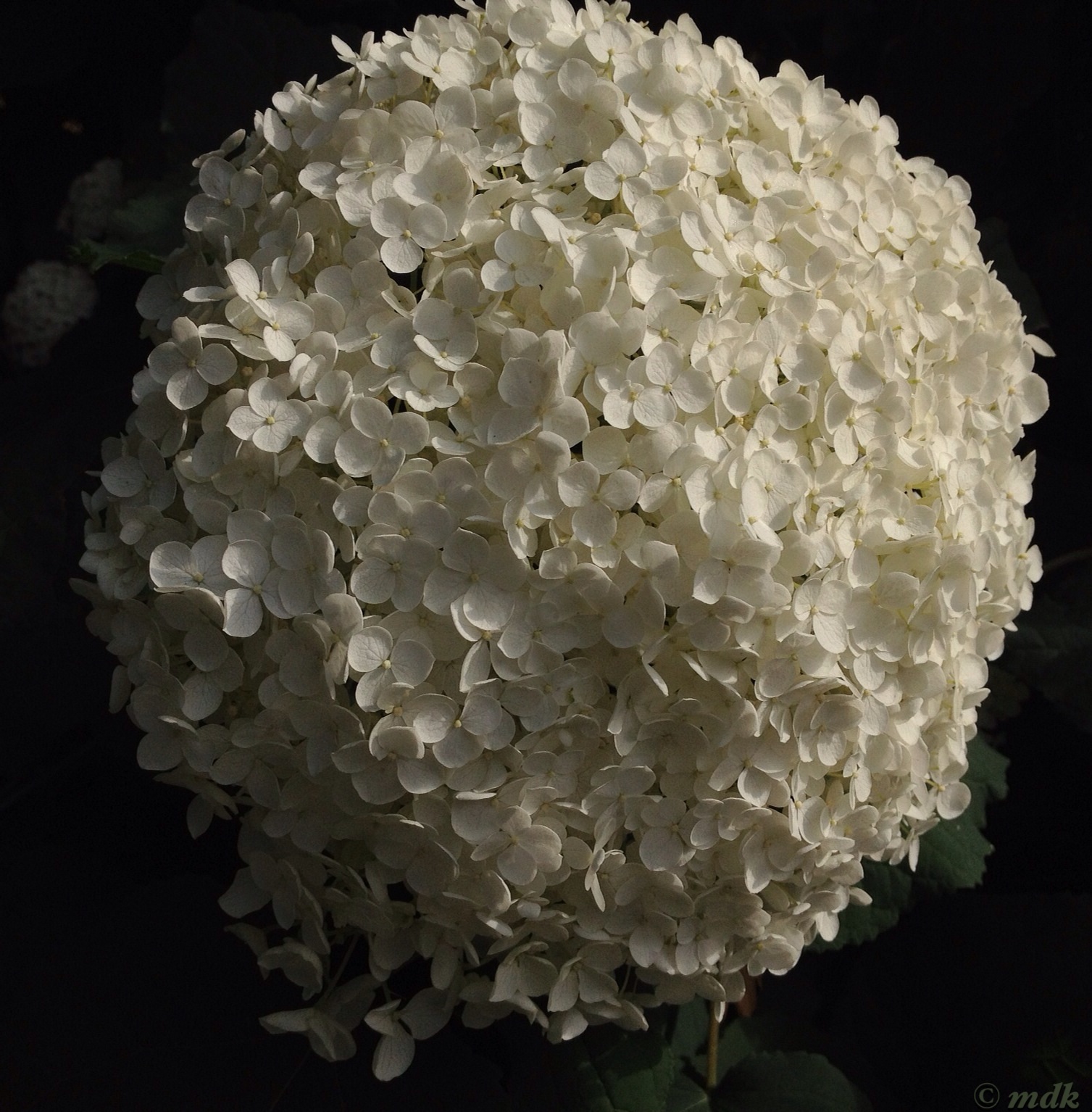 Since my last visit the hydrangeas have taken over as the flower of the moment. Huge heads of four petaled flowers in colours ranging from white through pink to purple and even blue. My favourites are the lace caps, the large petaled, sterile flowers form a ring around tiny fertile flowers in the centre. They look especially nice in the winter when the petals dry and skeletonise. The bees seem to like the lace caps too, I watched a little bee dance of joy in the centre of one flower. 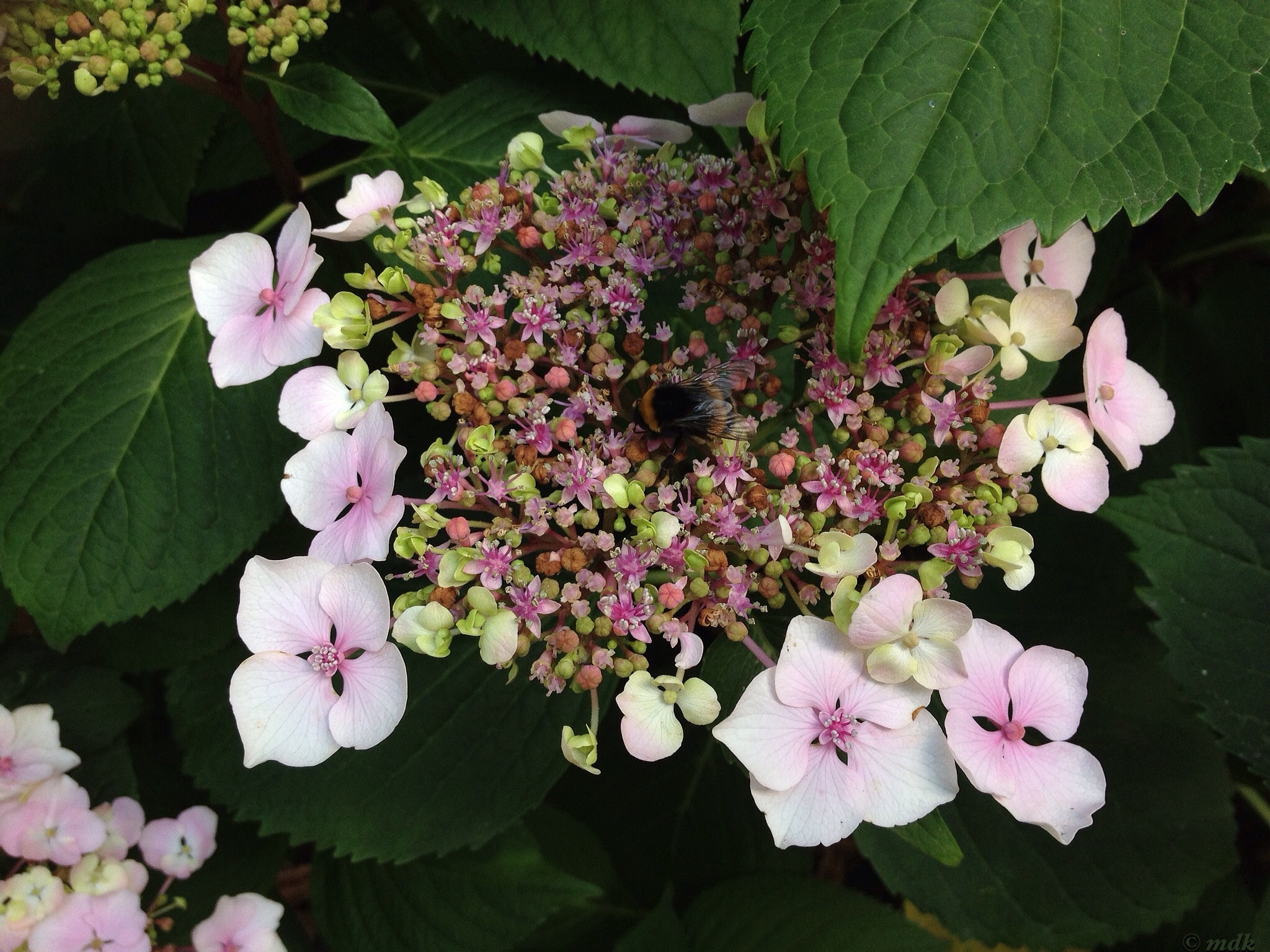 Walking up through the precinct in Above Bar the stall holders were setting out their wares for the morning. Most of these sell food of various types and the smells of cooking are quite mouth watering. There are foods from every corner of the world but my favourite had to be the one selling fruit and vegetables. The colours were wonderful, tomatoes, plums, oranges, nectarines, peaches, cherries and berries of every kind. With such a choice of wonderful fresh veg how could anyone resist? I had to though because the stall wasn’t actually open and I had to get to work. 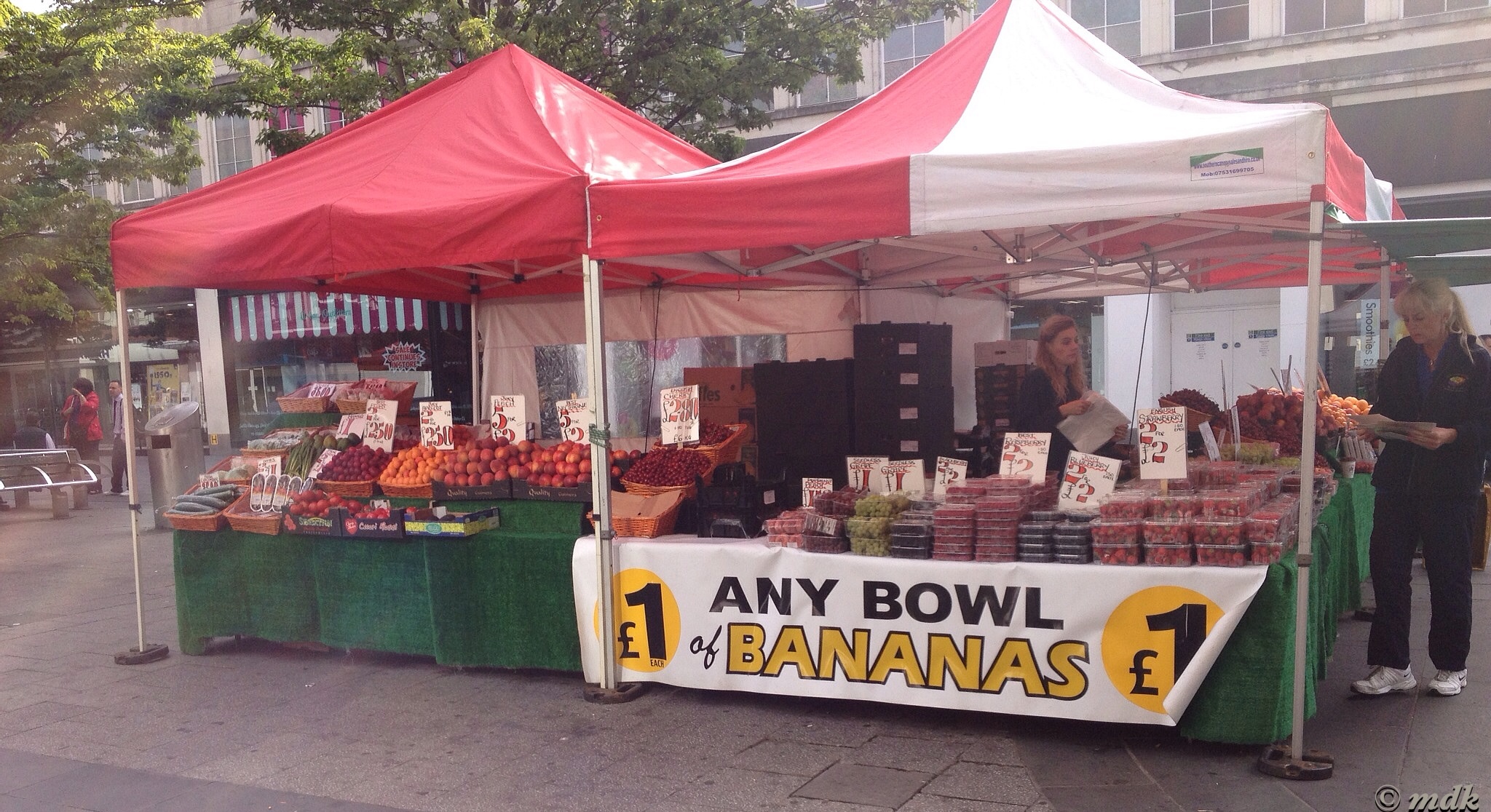 While my computer was loading up I went out to make myself a coffee only to be faced with a terrible temptation. It was Anika’s birthday so she had bought in cakes. Usually I am quite the expert at resisting a tin of cakes in the kitchen, I just avert my eyes and try to pretend they’re not there. It’s one thing to avert the eyes but quite another to ignore the smell, one of the most evocative of senses.  Anika seemed determined for everyone to partake in her birthday treats. She hadn’t brought in just normal cupcakes in a tin, ones I could easily pass by, oh no, she had artfully arranged a plate of seductive Danish pastries right next to the kettle. That fresh baked scent wafted around the little kitchen transporting me right back to my time in the little New Beginnings office with Mac and I was lost. Thank heavens she’d cut each one in half, cleverly halving the number of calories I was about to consume. 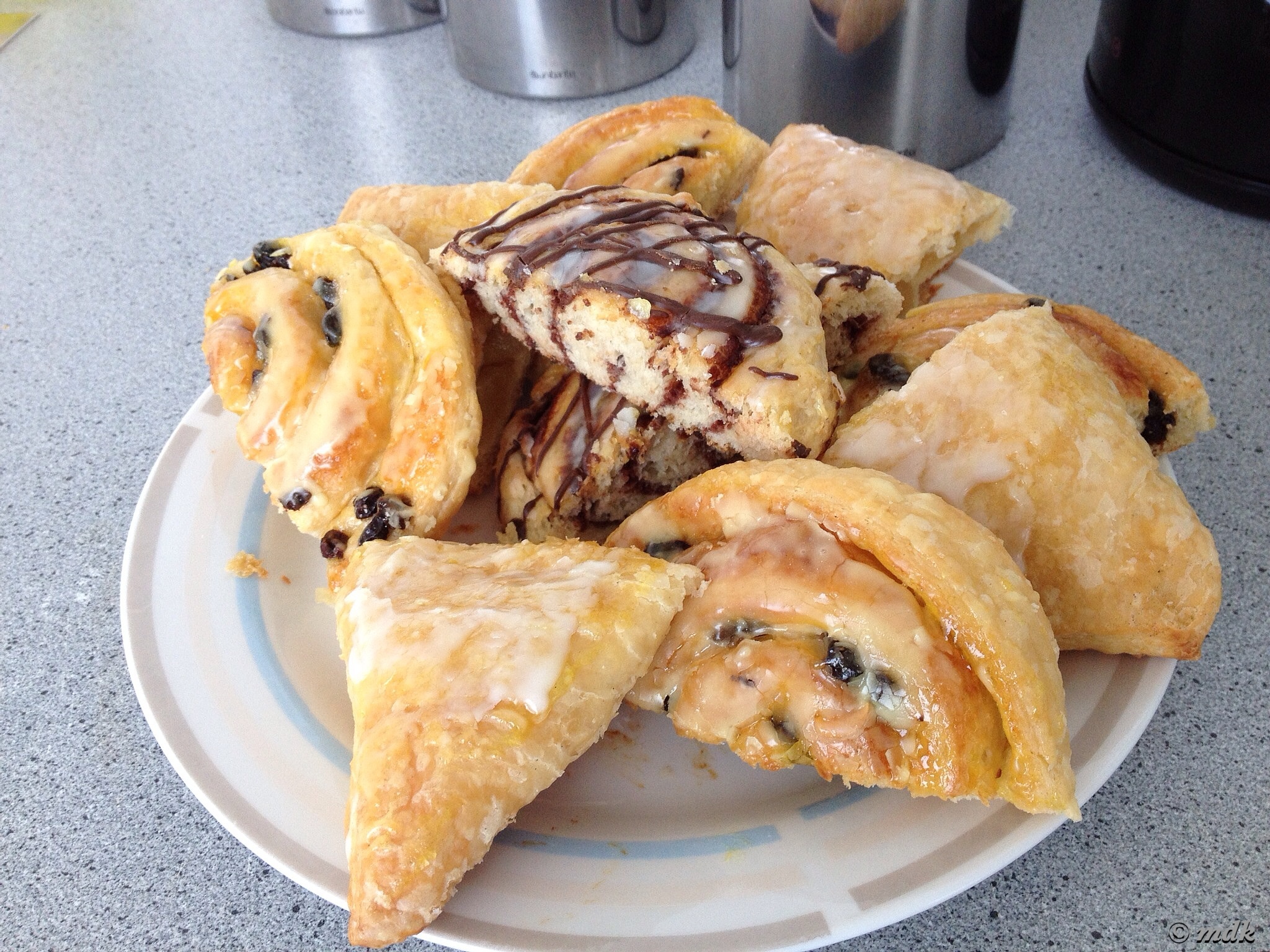 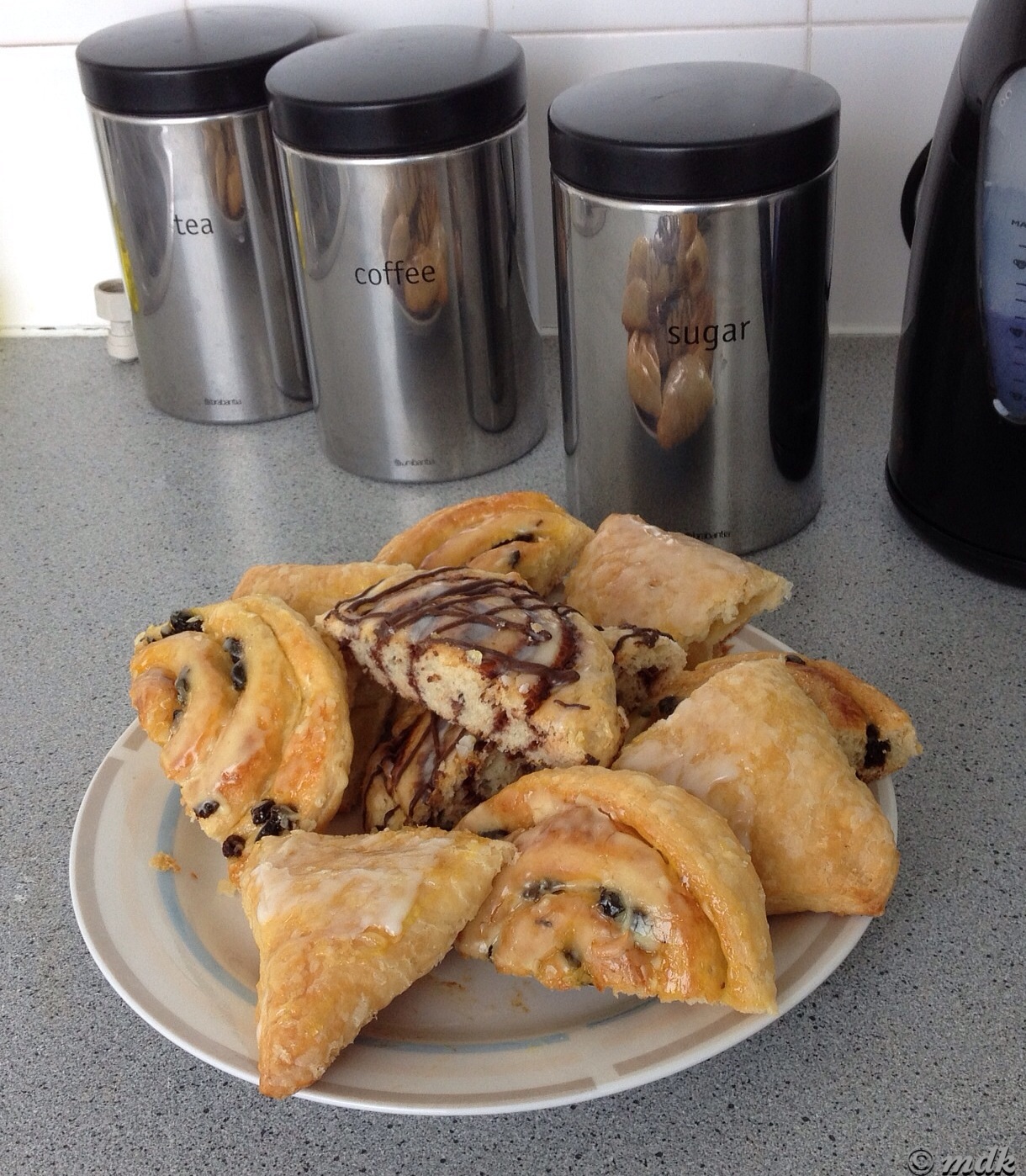 So my morning coffee was accompanied by a very tasty half Danish pastry. Oh dear! I keep saying today is going to be better and it keeps being worse. At least I didn’t go back for a second half, unlike some people I could mention. Work wise it wasn’t the best of days either. Some progress was achieved but it was one of those, teeny tiny jobs that will just take a moment but turn into hour long problems kind of days. 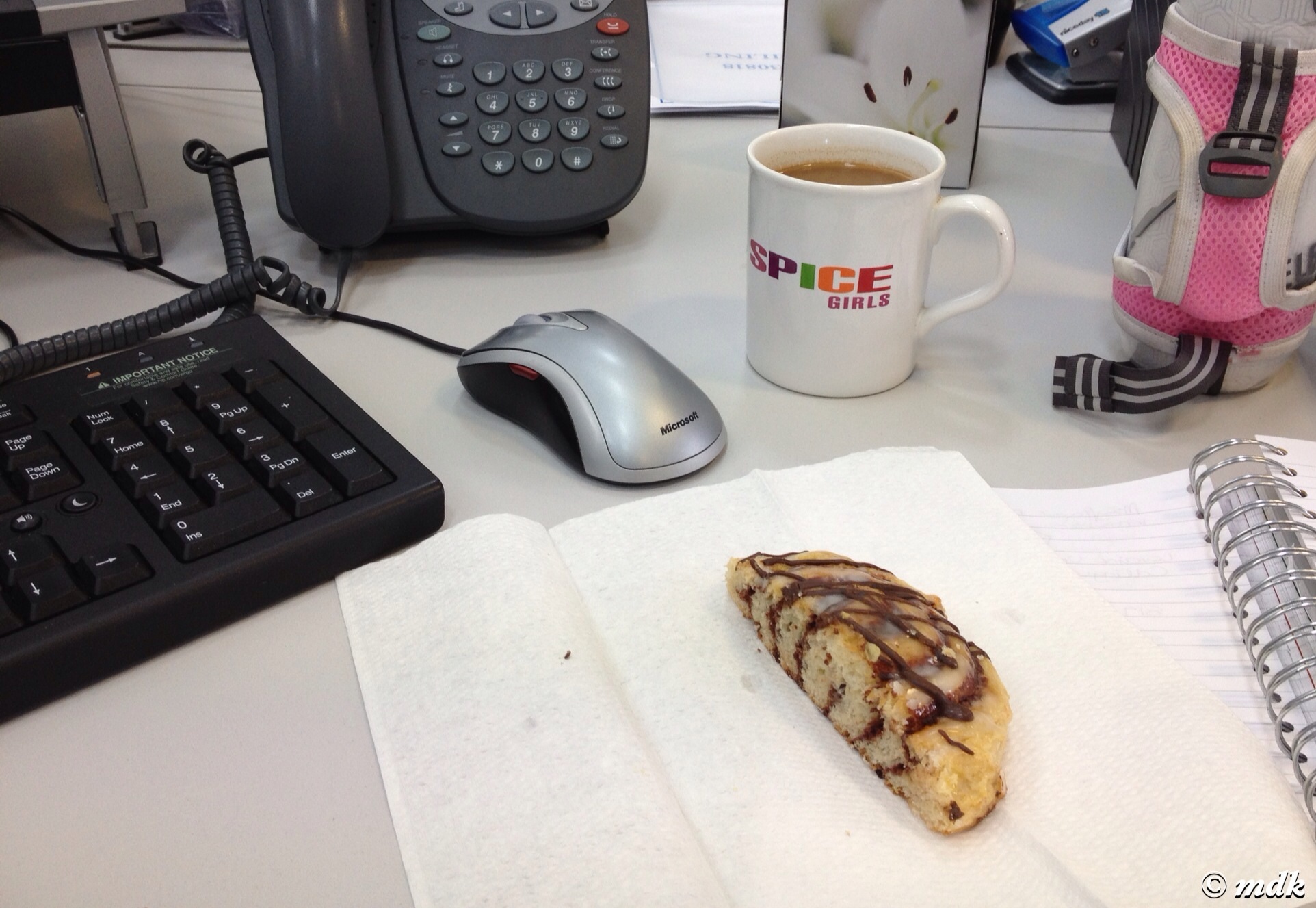 Gail joined me for my lunch time walk. She was having the same kind of day as me and just wanted to get out of the office and away from it for a while. I’m getting a bit of a reputation in the office for being rhino obsessed so I thought I’d better not drag her around looking for them, thus proving the last of my marbles had departed. Even so, I sneakily took her to get coffee by way of the next rhino on my list. It had to be done and I don’t think she minded much. We ambled along Western Esplanade, passing the Pig in the Wall Hotel, and making our way towards the boats in the street there. Back when the walls were young this area was a bustling, noisy wharf where fishermen, sailors and merchants went about their business. Now the land has been reclaimed but, in recent years, archeologists found the remains of a number of boats. In my mind’s eye I imagine it as being rather like the shore by the Big Bridge, a ship graveyard. Today, some of those finds have been reconstructed right where they were found which is why there is a boat in the street. 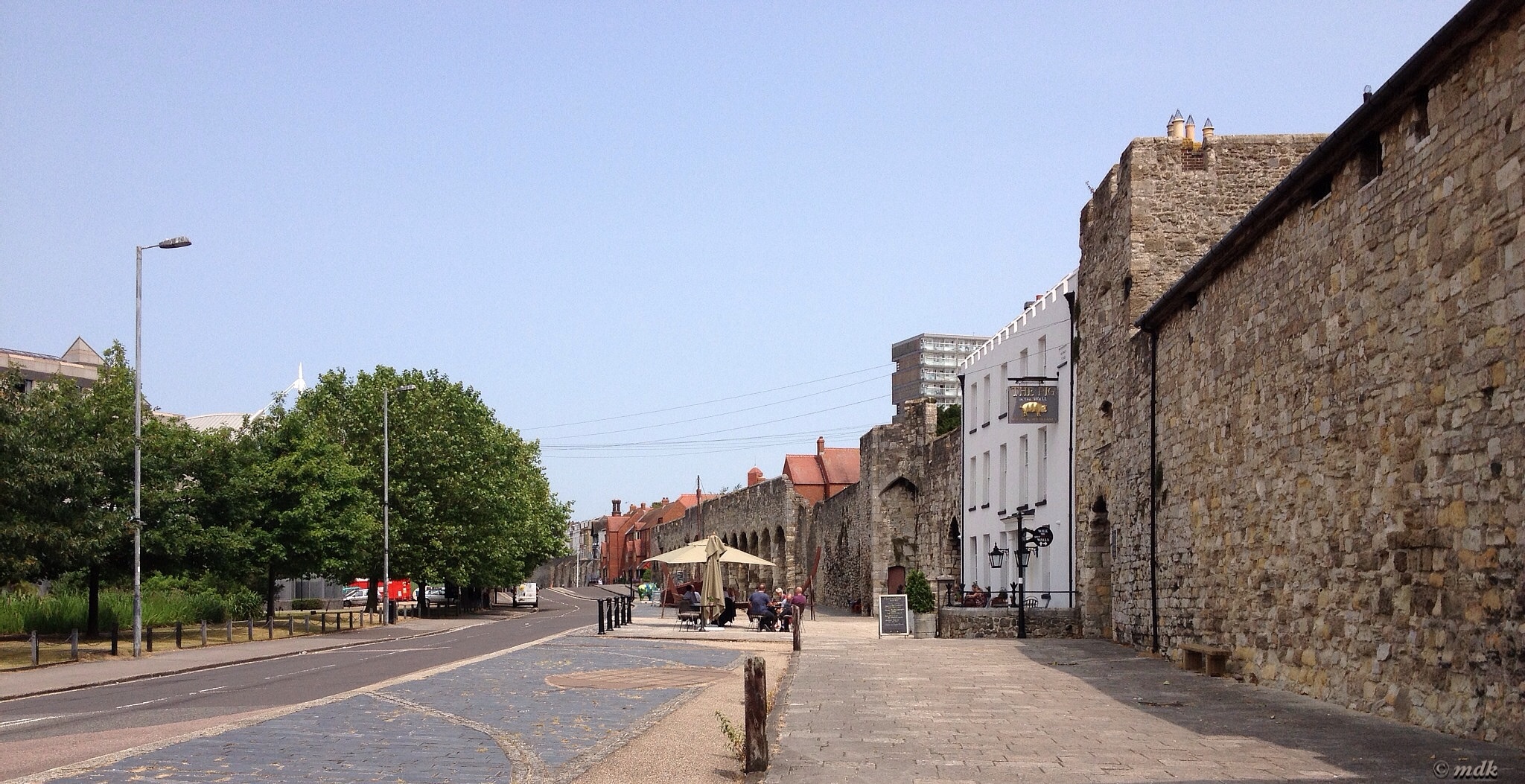 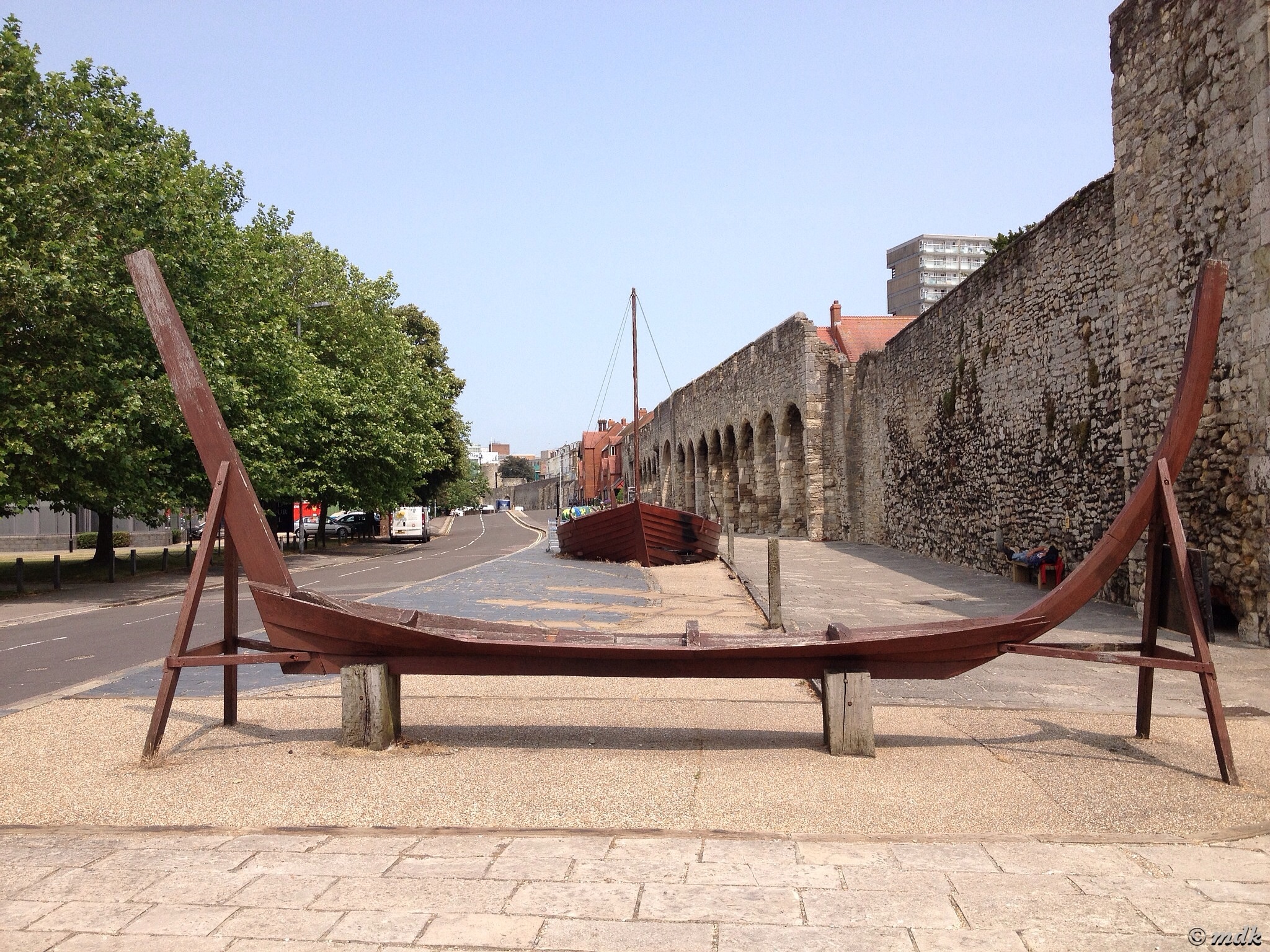 Just beyond the boats, near the arch to Tudor House, I could see something suspiciously rhino like. This was my first sight of Newton, rhino number ten, and another sponsored by Wild in Art. Artist Sue Cook is self taught and creates quirky, colourful paintings mostly inspired by nature. Newton is a reflection of the rainforest, green, gold, yellow and cobalt blue, he’s a mass of exotic vegetation crawling with lizards, then again, I guess they’re probably newts. He’s magnificent. 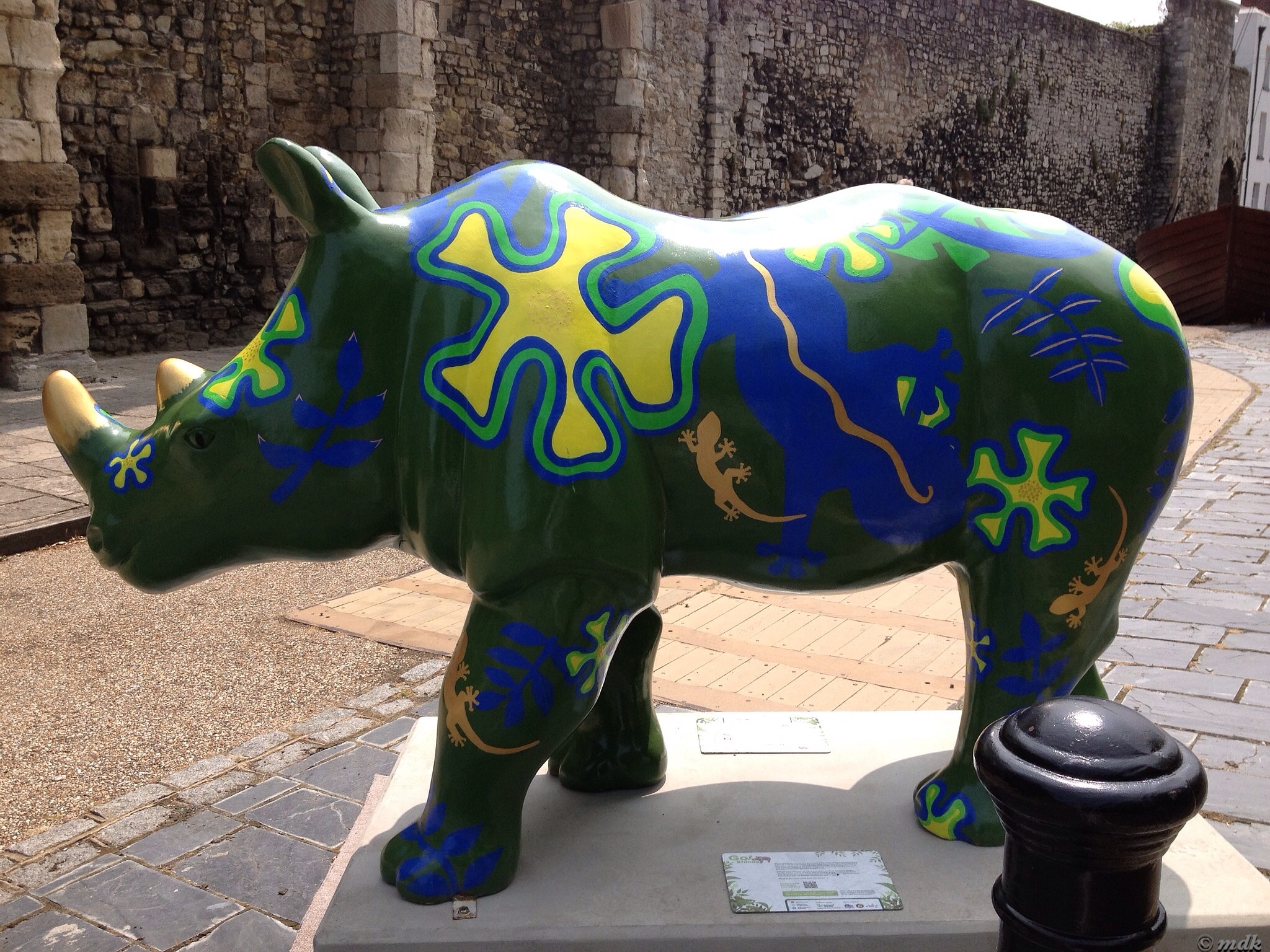 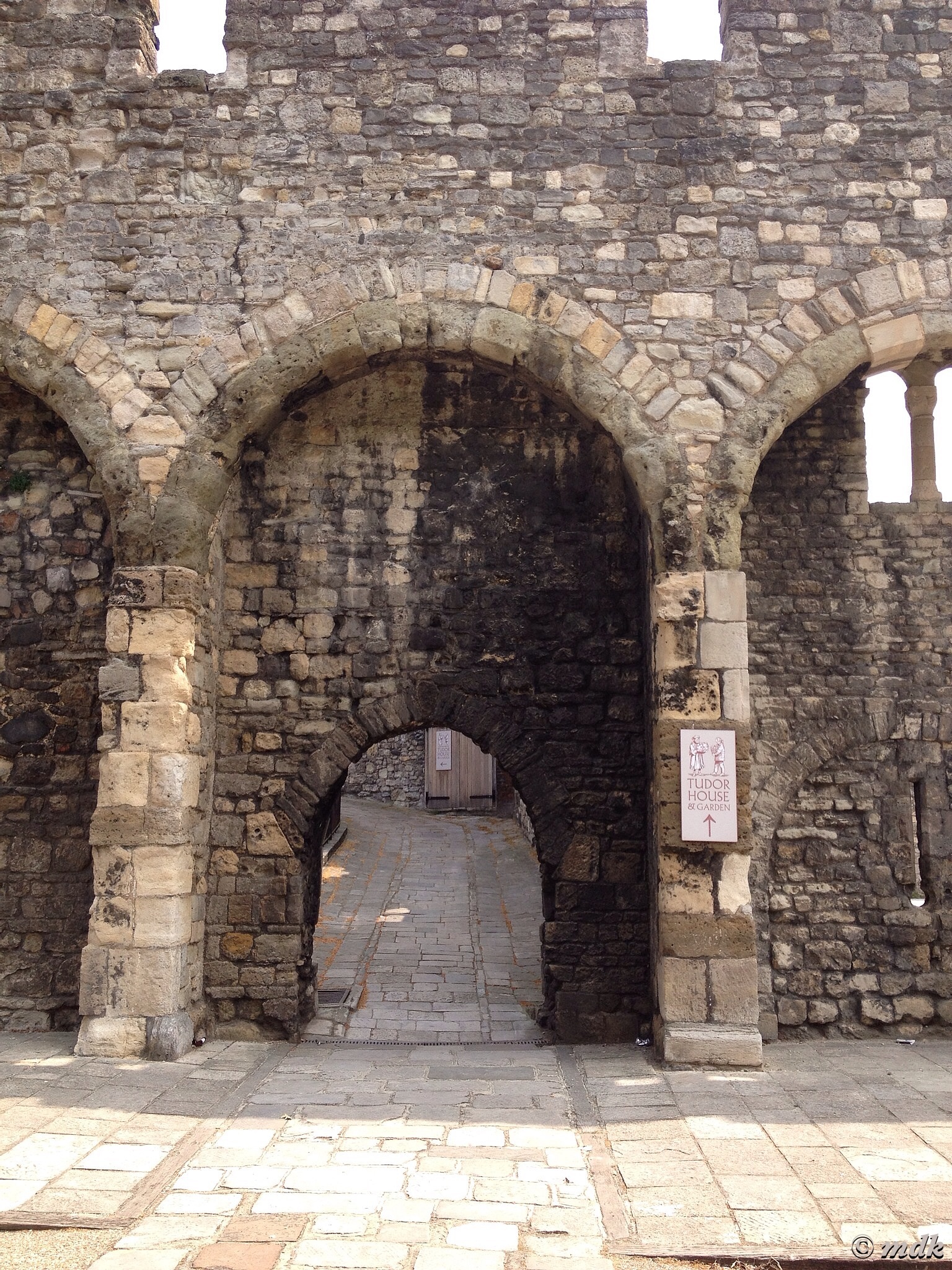 Then we walked up to Costa’s, picked up a coffee cooler each (skinny of course) and sat on one of the benches in the enchanted park watching the world go by for a while. People watching is fun, especially in summer when coats give way to strappy dresses and shorts. Mind you, some people, do seem to wear rather less than is decent, and some of the acres of flesh on display might be far better covered up.

After an afternoon that was no more productive than the morning I set off for a walk home. Gail joined me. Once we’d crossed the Chantry footbridge over the railway line I spotted a tall cloud of smoke spiralling high into the air behind the buildings. Near the road I could hear the sound of sirens and warned Gail to watch out for speeding fire engines heading our way. We needn’t have worried the engines weren’t coming past us at all, they seemed to be heading towards the Itchen Bridge.

The smoke on the horizon grew thicker and blacker as we approached the bridge and both of us were fixated on it, wondering what on earth could be burning. Things didn’t become any clearer until we’d climbed the steps onto the bridge. There was a huge fire on the other side of the river, not a building, as we’d suspected, but the grassland close to the railway line along Peartree Green.

We watched astounded as the smoke swirled and grew, the fire was spreading with alarming speed through the dried grasses and the scrub behind the trees. We saw a train slow to a crawl and edge through a tunnel of smoke. People lined the edges of the bridge staring in horror. Some, myself included, fished out phones and took photographs. Huge bursts of flame exploded skywards, taller than the mature trees. The gorse was going up! 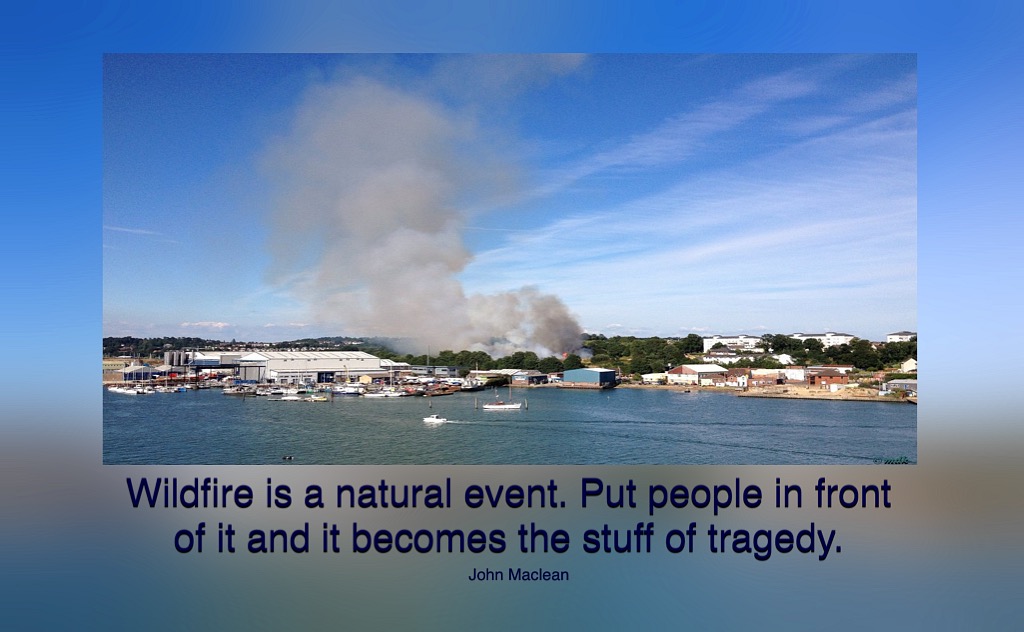 More and more fire engines sped across the bridge, lights flashing and sirens blaring until we wondered if there was a fireman in the city not attending this particular fire. The path we walk, taking us behind the top part of the green and down into the little wooded area looked clear enough as we left the bridge. The smoke seemed to be billowing towards the river rather than up the hill towards the green. When we reached it though, the way was blocked by fire engines and crowds of local people looking on so we had to walk on the tinder dry grass above the path. We could hear the fire crackling and growling behind the trees. 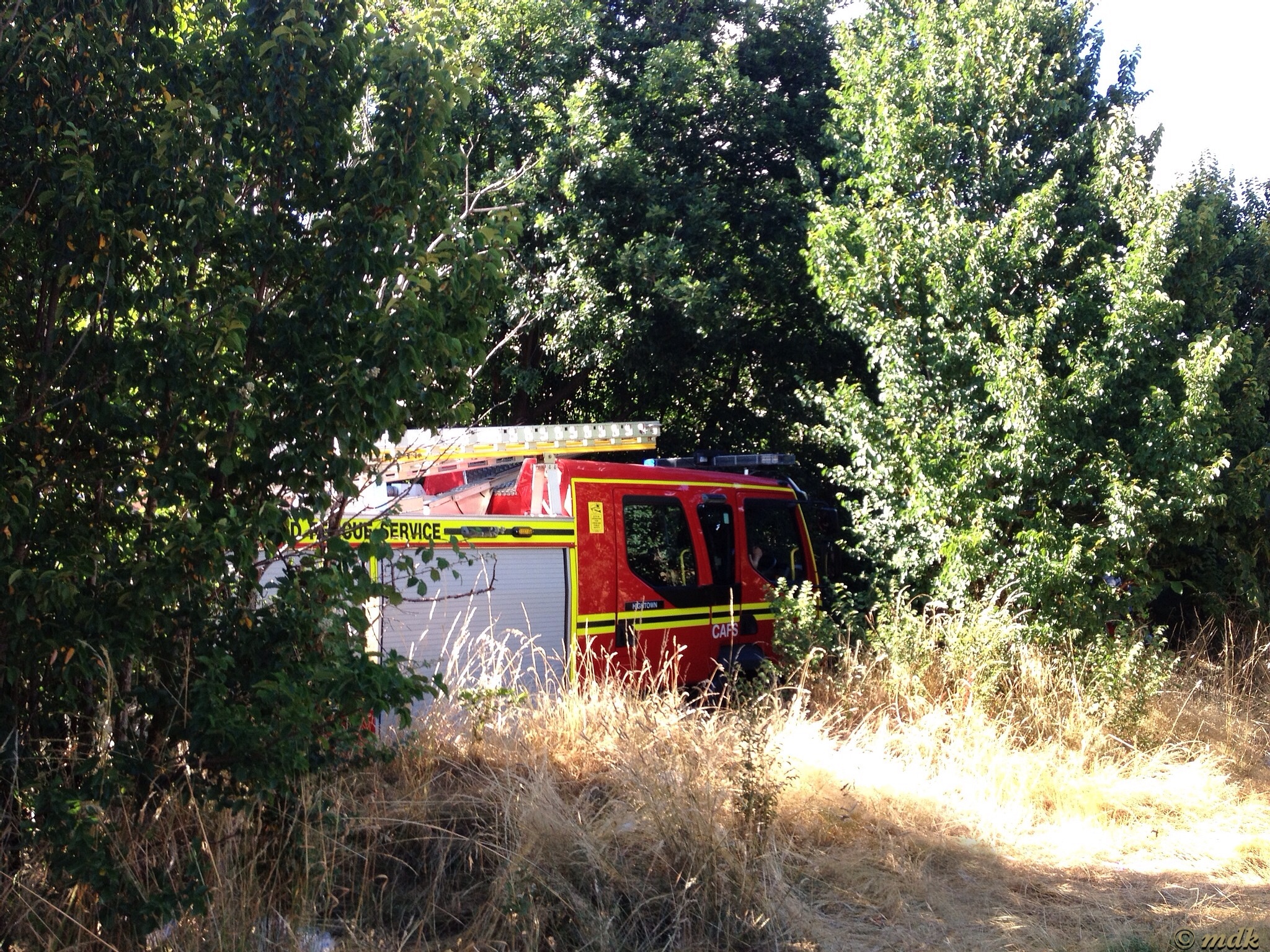 I couldn’t help thinking of all the wild flowers, insects, birds and little animals living on the green. We peered between the trees trying to see if the fire was coming towards us or not. At a gap we stood and wondered if it was safe to step down onto the path and rejoin our normal route at this point. A policeman came along the path and told us to stay back, “it’s spreading this way!” Now I was worried about the lovely peaceful wooded area and the sprinkling of houses between it and the burning grass. 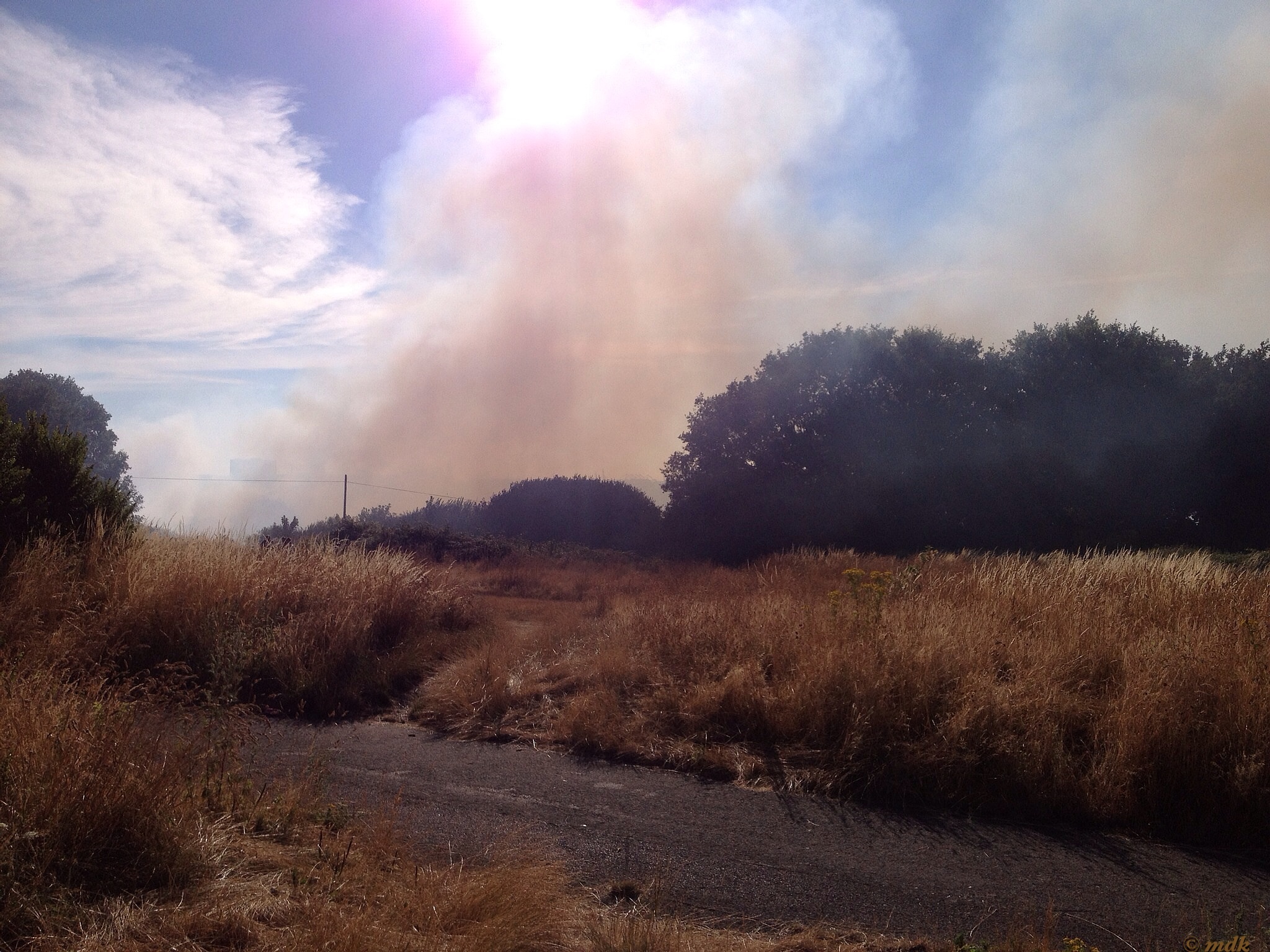 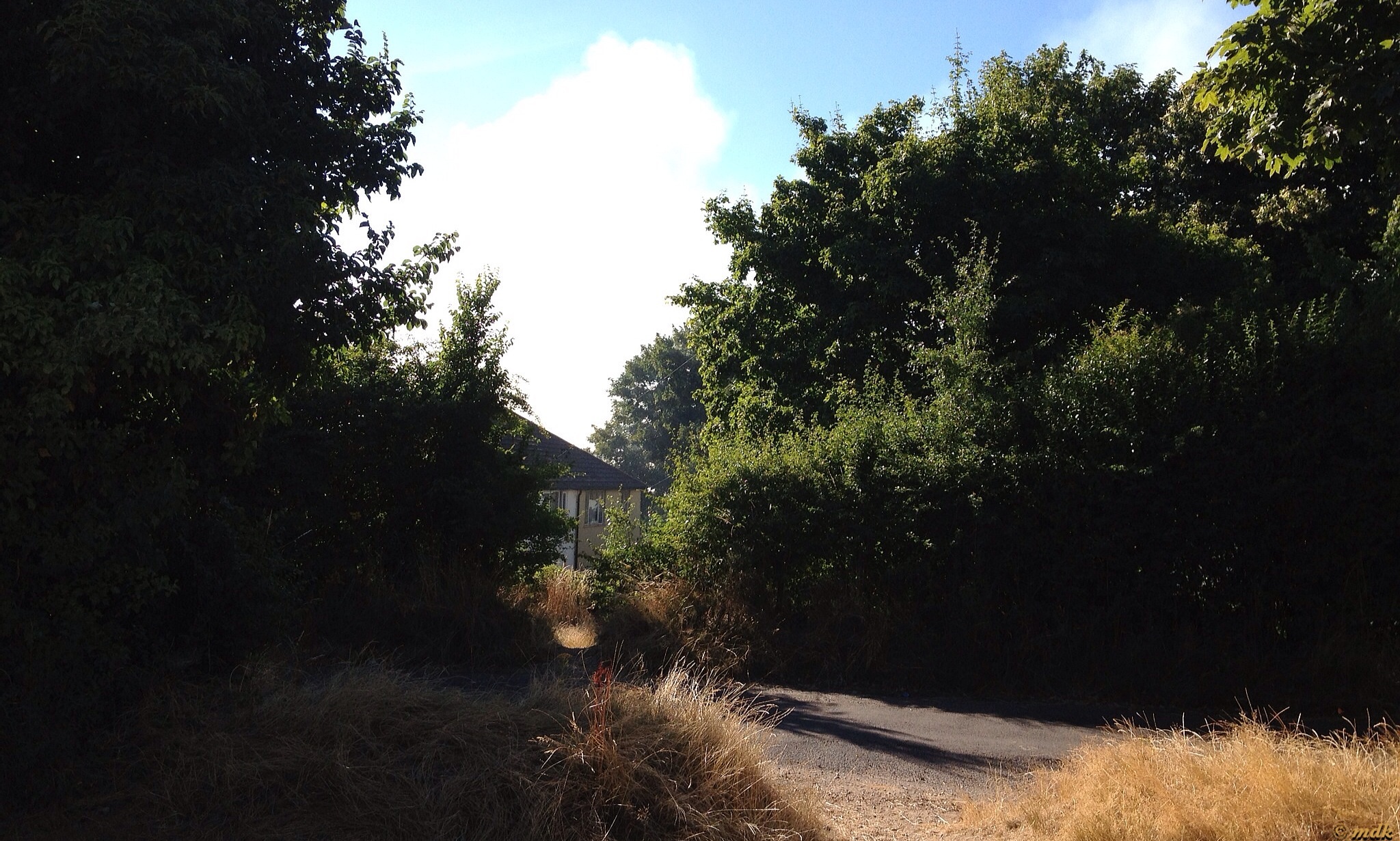 There was nothing to be done though. We carried on along the green, the smell of burning in our nostrils and little eddies of smoke drifting towards us. More fire engines sped down Peartree Avenue at intervals as we walked up the hill. As we parted company, right at the top of the hill, over a mile from the fire, big pieces of ash floated down around us like snowflakes and we could still smell the smoke in the air.

The local news was on when I got home, telling me that more than forty firefighters were trying to control the blaze. Fingers crossed they have succeeded by now. I’m almost afraid to walk back that way for fear of what I might see. Will any of my woodland walk still be there in the morning?