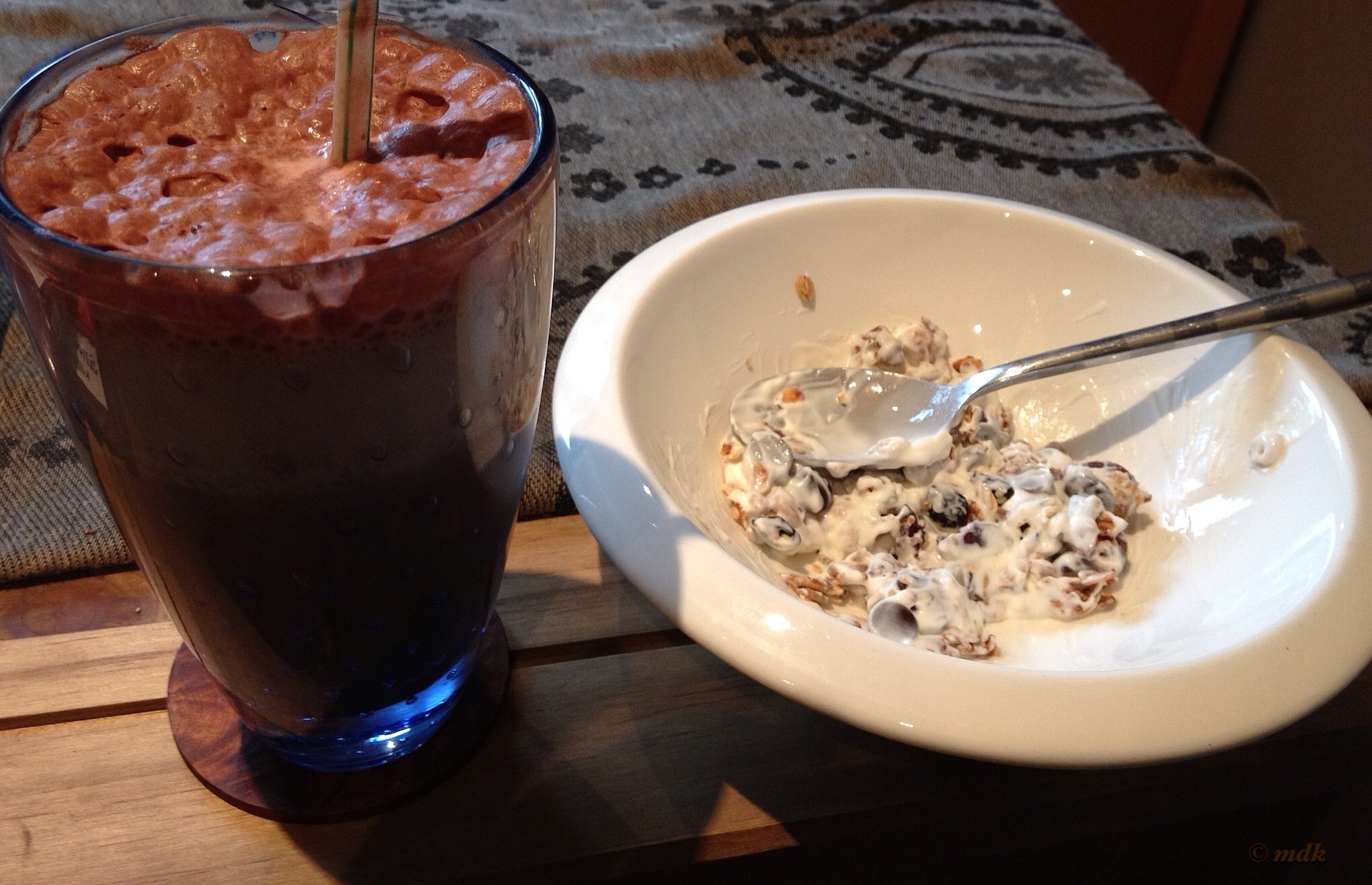 Gigi’s last day at work and I almost didn’t make it because of an upset tummy. In the end I did go to work though and, at lunchtime, there was some more rhino hunting with Alice. The Bargate rhinos were easy enough to find but the WestQuay rhino proved a tricky customer. Then we discovered one of the rhinos in the park had been vandalised…

Yesterday evening I developed a bit of an upset tummy. Goodness only knows what caused that, I didn’t eat anything out of the ordinary. Maybe it was the plasticy water on my walk, maybe it was just a bug going round. It was a rather unconfortable and disturbed night. Things were better this morning, although not perfect. There had been a while there where I thought I might not be able to go to work but, after a healthy breakfast of granola, yoghurt and a chocolate smoothie (skimmed milk, water, high quality cocoa powder and honey) I felt three quarters human.

Then it was off to work. The damp weather and my not quite right stomach had me catching the bus, a bit of a cop out I know but there it is. Still I did get to work early which was just as well given how much I had to do. One headache of a problem was solved fairly quickly. I spent a considerable amount of time on Friday dealing with an angry musician who had been charged for laundry while on board when they shouldn’t have. Emails were sent to the ship trying to work out what had gone wrong. The musician was mollified, which took a lot of time and skill. This morning I got a copy of the bill from the ship. Turns out the musician was the one who had made a mistake, there was a laundry charge on the bill but a little further down it had been removed. Grrr. 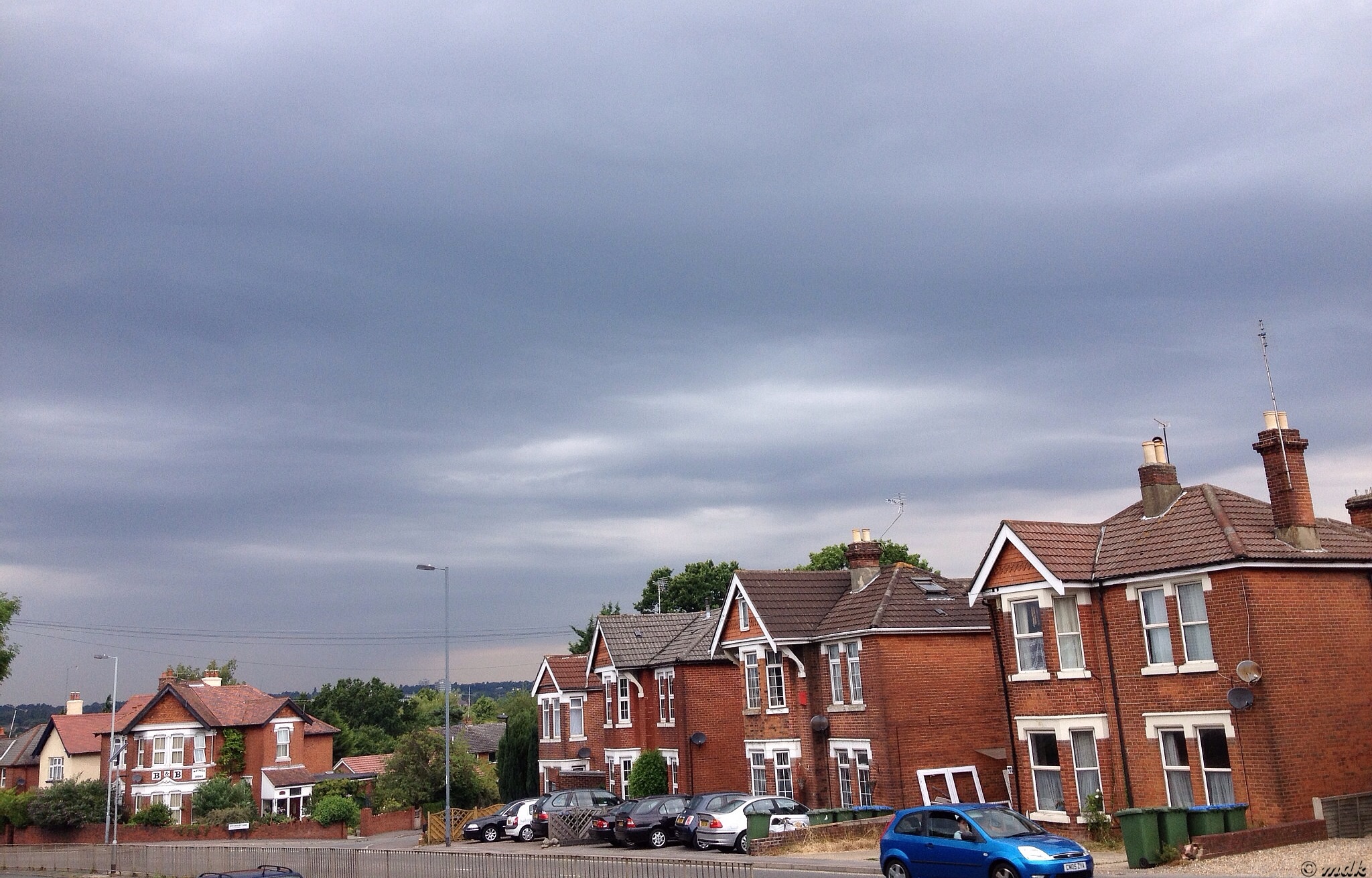 At lunch time Alice and I walked up to WestQuay. Today was Gigi’s last day and we had flowers to buy. As it happens, this would take me to my next three rhinos so it was a case of killing two birds with one stone. Rhinos eleven and twelve were on either side of the Bargate. For anyone who knows Southampton at all, the Bargate needs no introduction. The thirteenth century gate to the town and symbol of the modern city, it has served as guildhall, courtroom, prison and museum over the years. Trams once drove under the arch, soliders marched through on their way to war, and we’re not just talking recent wars here, Henry V and his troops left from here on the way to the battle of Agincourt. The men who plotted to kill him, including the Earl of Cambridge whose grandsons became kings Edward IV and Richard III, were executed outside this very gate.

The modern Southampton city centre is divided into Below Bar, the old walled city, and Above Bar, outside the old gate, where the precinct and the main shopping street, including the huge WestQuay mall stand. So far I’ve explored the rhinos Below Bar and number eleven, Mrs Hearty, is the final one. Painted by four students of Richard Taunton Sixth Form College, Mehnaz Rahman, Mary Enyon, Emmanuel Owusu-Afram and Ryan Young, Mrs Hearty didn’t take much finding, being just inside the old walled town, right beside the Bargate. 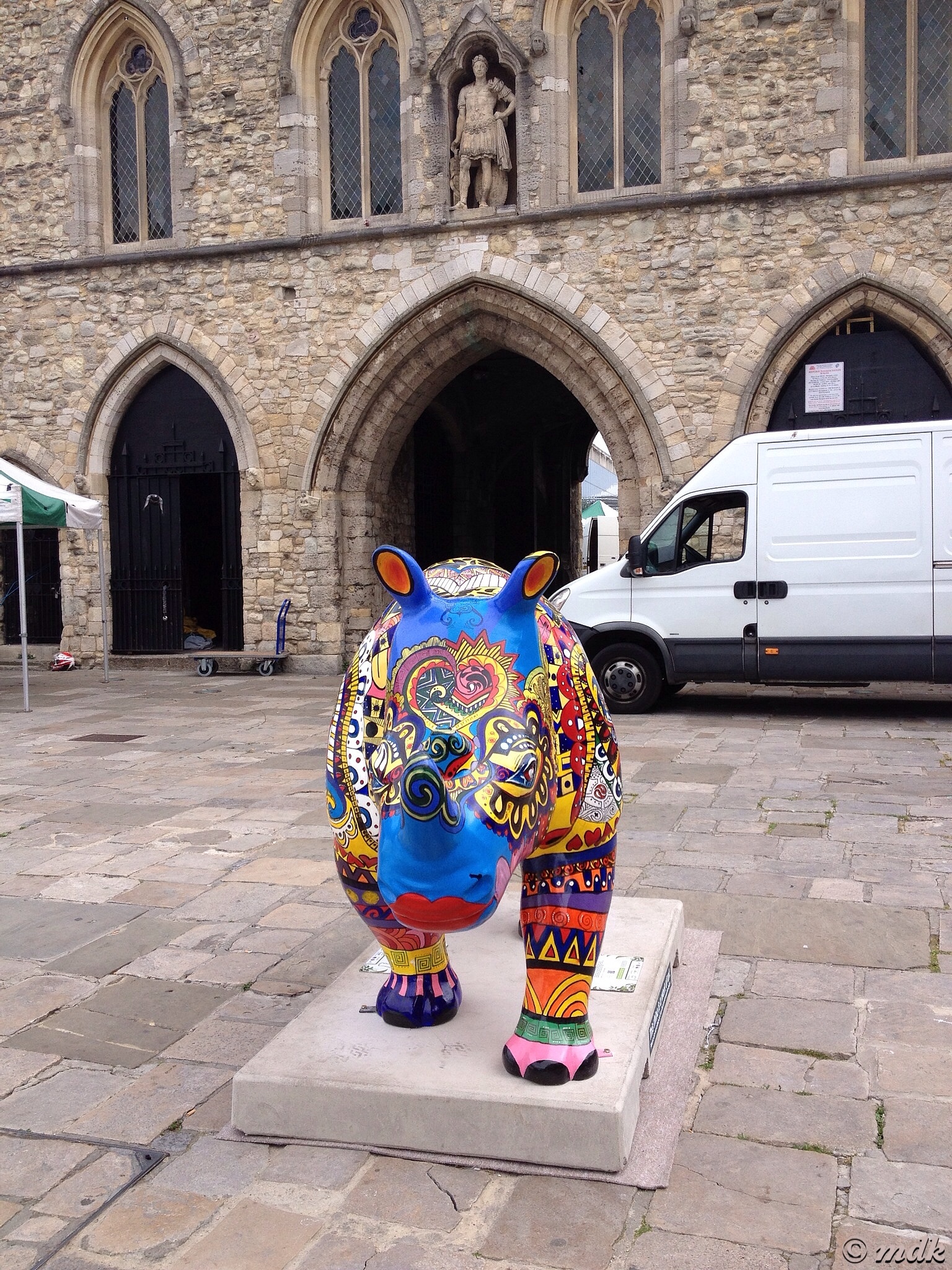 Mrs Hearty is a riot of colour, flowers, hearts, geometric shapes and stripes, to me there is something of India about her although the designers say they wanted to meld the colour and feel of the rhino’s origins in Africa. Unsurprisingly with such an intricate pattern, the painting took sixty three hours and was featured in the Daily Echo along with the young artists who painted her. She is sponsored by Wessex Heartbeat, a charity devoted to improving cardiac care. This charity also sponsored a baby rhino, Hearty, all to support the HIGH 5 Appeal, aiming to raise £500,000 to build a specialist unit at Southampton General Hospital to support children and young people with heart conditions. I haven’t seen the baby rhino yet but, apparently, the design for Mrs Hearty was based on her.

Right on the other side of the gate, just outside the old walled city was number twelve, Kyma. She was sponsored by Wave 105, a local commercial radio station, who held a competition to find an artist for their rhino. She isn’t actually painted, she’s a mosaic rhino, rather reminiscent of something Antoni Gaudi would have made if he’d been involved in the Go Rhinos project. The artist who created him is Natalie Guy who specialises in mosaic art, which is very tactile. Kyma is the Greek word for wave, hence the name and her inspiration was the area covered by the Wave 105 radio station. In fact she has the Hampshire coastline running along her tummy. Personally I love the shimmering glass beads that make up the shoreline. 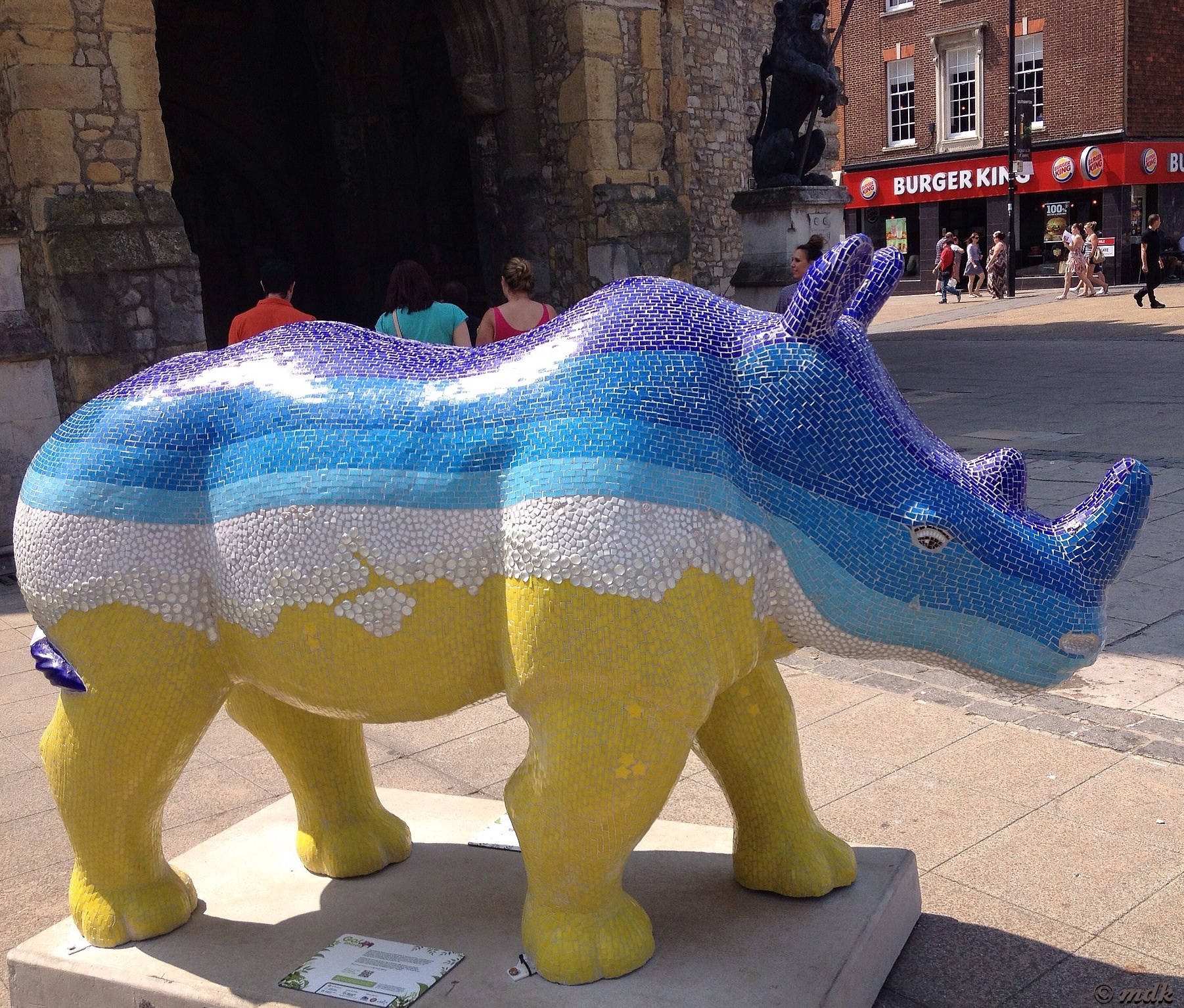 Kyma is worth a close inspection too, there are clay stars hidden in the yellow tiles that cover her belly and legs, representing the stars heard on Wave 105. There are also clay inserts hidden elsewhere. I spotted some flip flops and ammonites, but I’m not telling you where you’ll have to look for yourself. 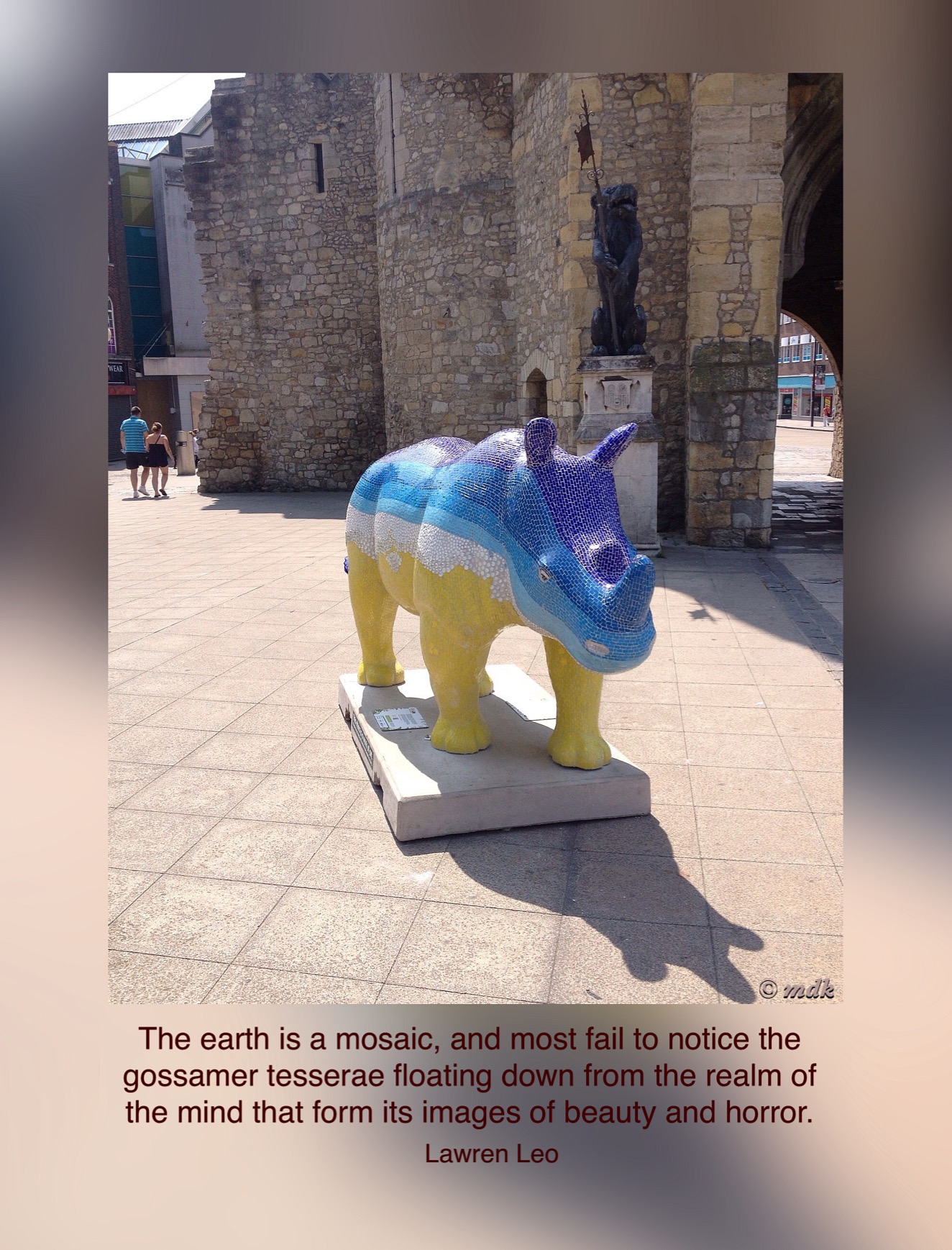 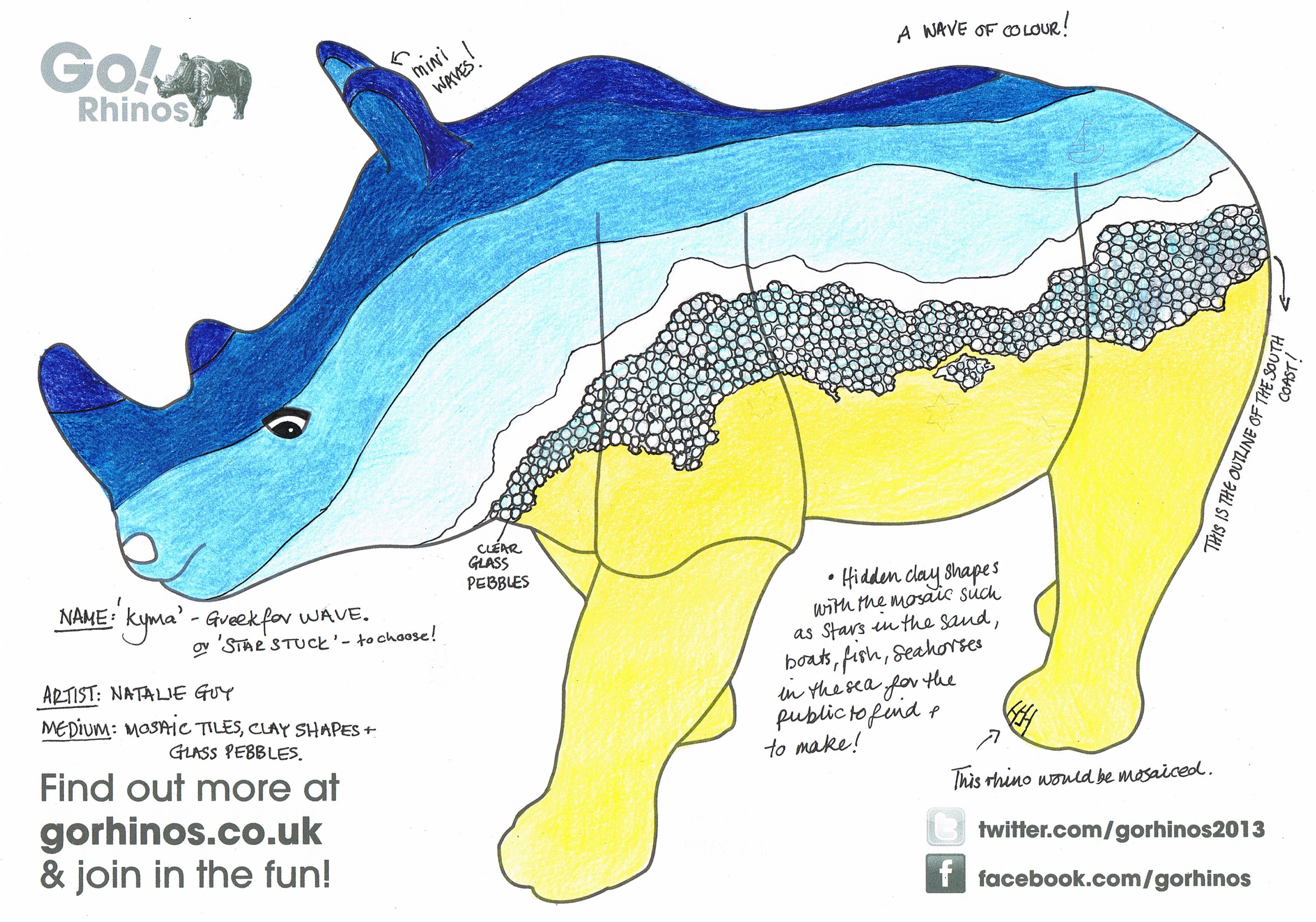 After I’d taken my rhino photos Alice and I carried on to WestQuay. The flowers were simple, well they were once we’d managed to choose from the stunning array in Marks and Spencer. We ended up choosing a large bouquet and a very pretty potted orchid which would last a bit longer than cut flowers. The rhino was slightly more difficult. For some reason I’d expected it to be outside the main entrance in Above Bar. It wasn’t. I’d peered through the glass doors between all the milling shoppers but couldn’t see it there. Surely something as visible as a brightly coloured rhino would be obvious. As WestQuay was crowded and the flowers in Marks and Spencers are downstairs near the back entrance we decided to nip round the outside and go in that way. If the rhino wasn’t outside or in the wide walkway inside the doors, I figured it would be in the atrium downstairs so we could look for it once we had the flowers. 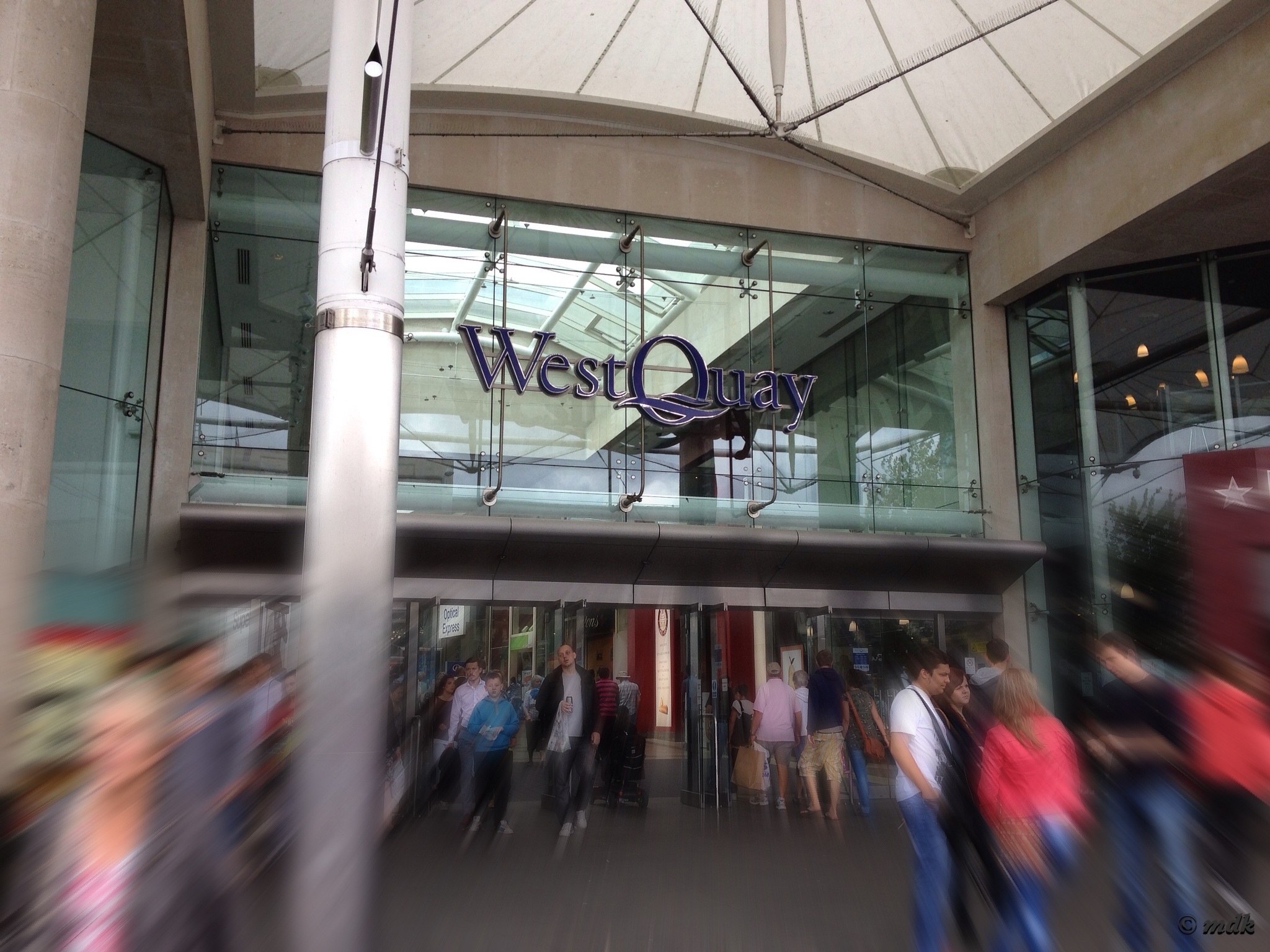 After walking all round the atrium we’d had no joy so I resorted to the Go Rhinos iPhone app. This is all very well but it only gives a general idea. We seemed to be getting closer and closer to the little pink rhino on the map but neither of us could spot it. Then we seemed to be getting further and further away. I knew that couldn’t be right. Slowly it dawned on me that it must be on the upper floor. We’d been walking under it all the time! After a quick dash up the stairs, a few more calories burned, we found it, right behind the information desk hidden from the street. 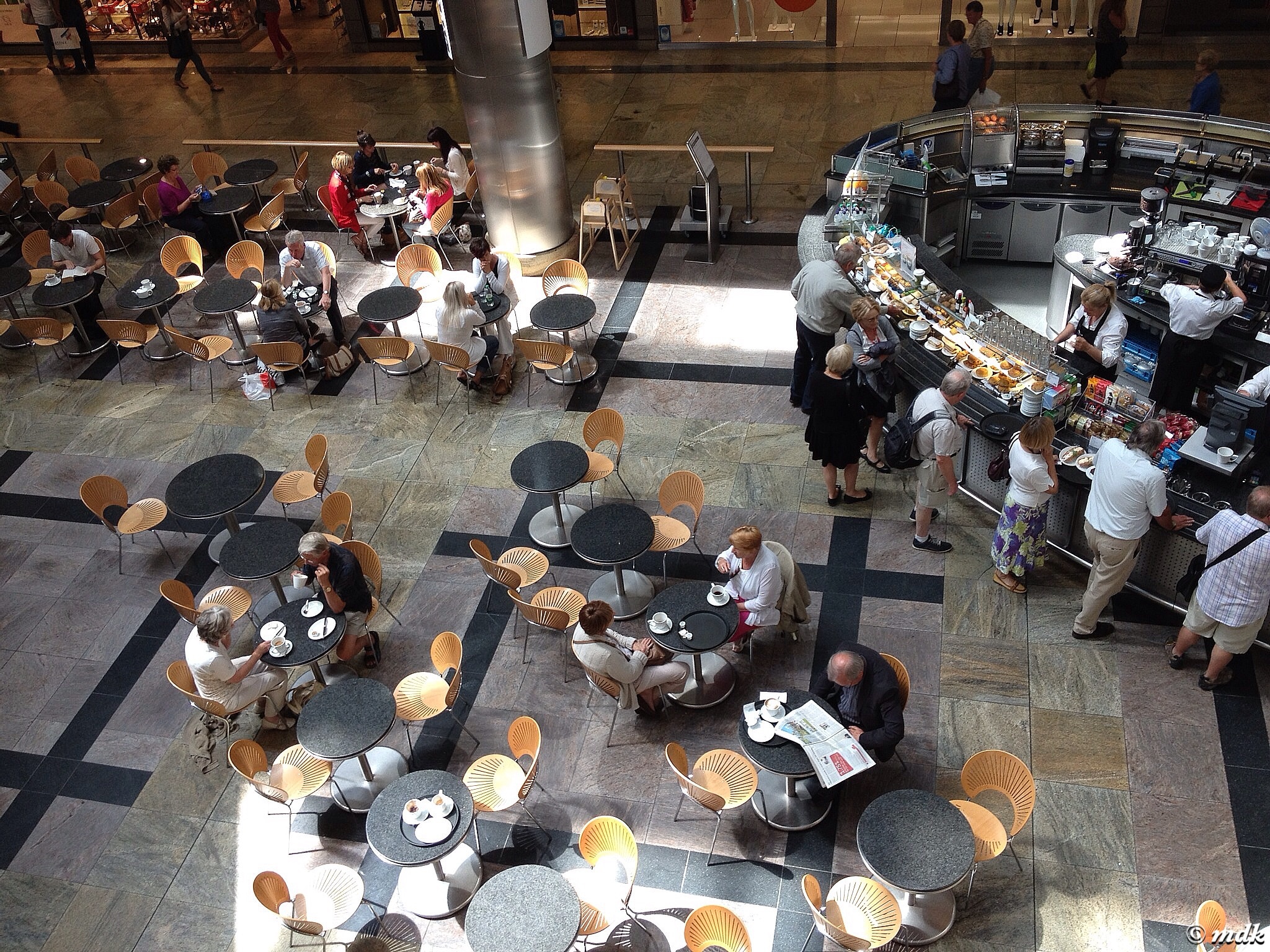 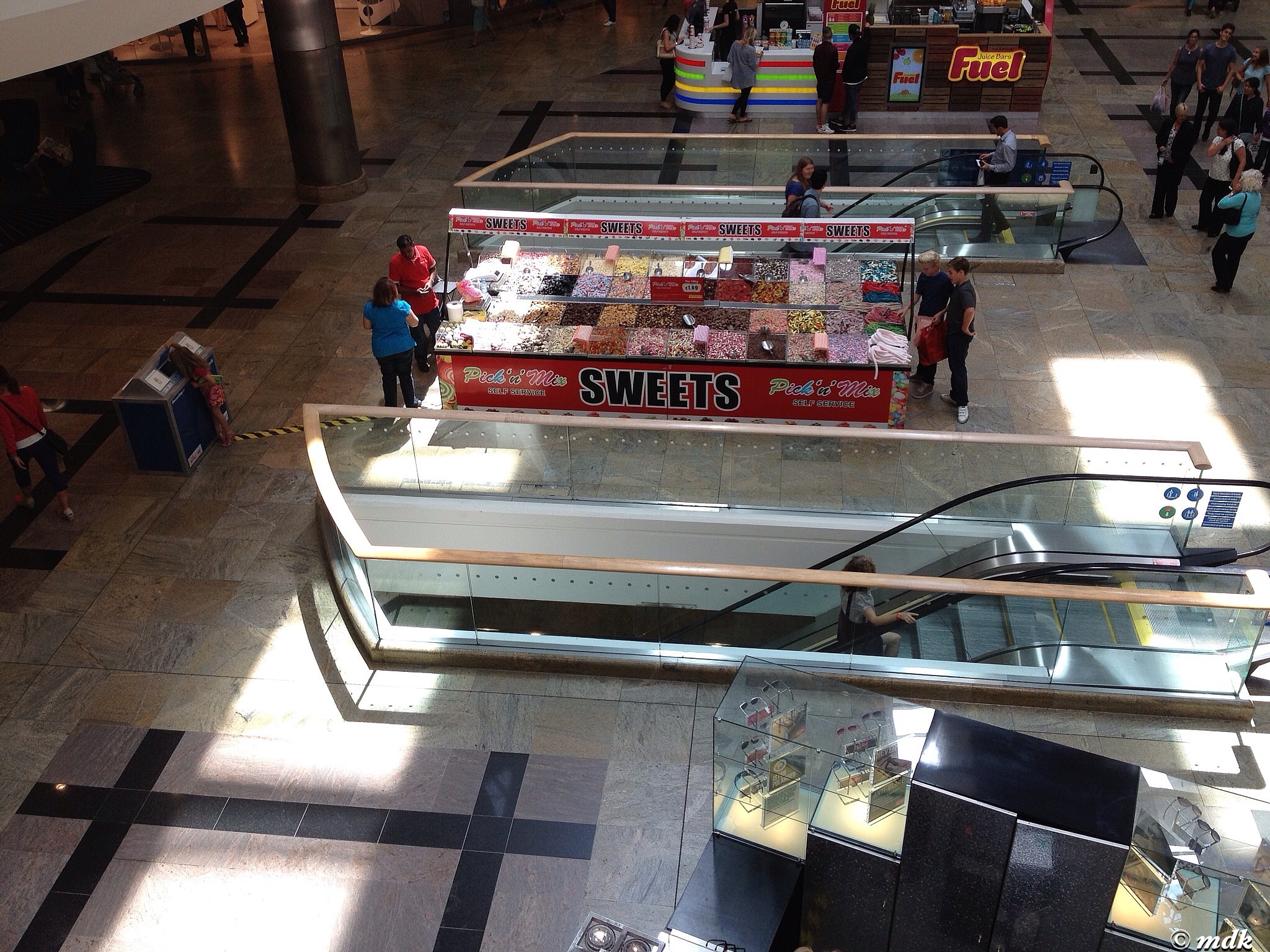 There were crowds of people all around it, children clambering over it, people taking photos. There would be no chance of getting a decent photo but I did the best I could. This is rhino number thirteen, Ringo. Not the famous Beatle Ringo, although I’m told Mr Starr is actually committed to saving the rhinos himself. Why he’s called Ringo I couldn’t work out but he was sponsored by WestQuay and painted by Minky, a Southampton based artist and property specialist, although quite how those two things go together is a puzzle. She specialises in three dimensional sculpture painting which is handy as the rhinos are three dimensional sculptures. 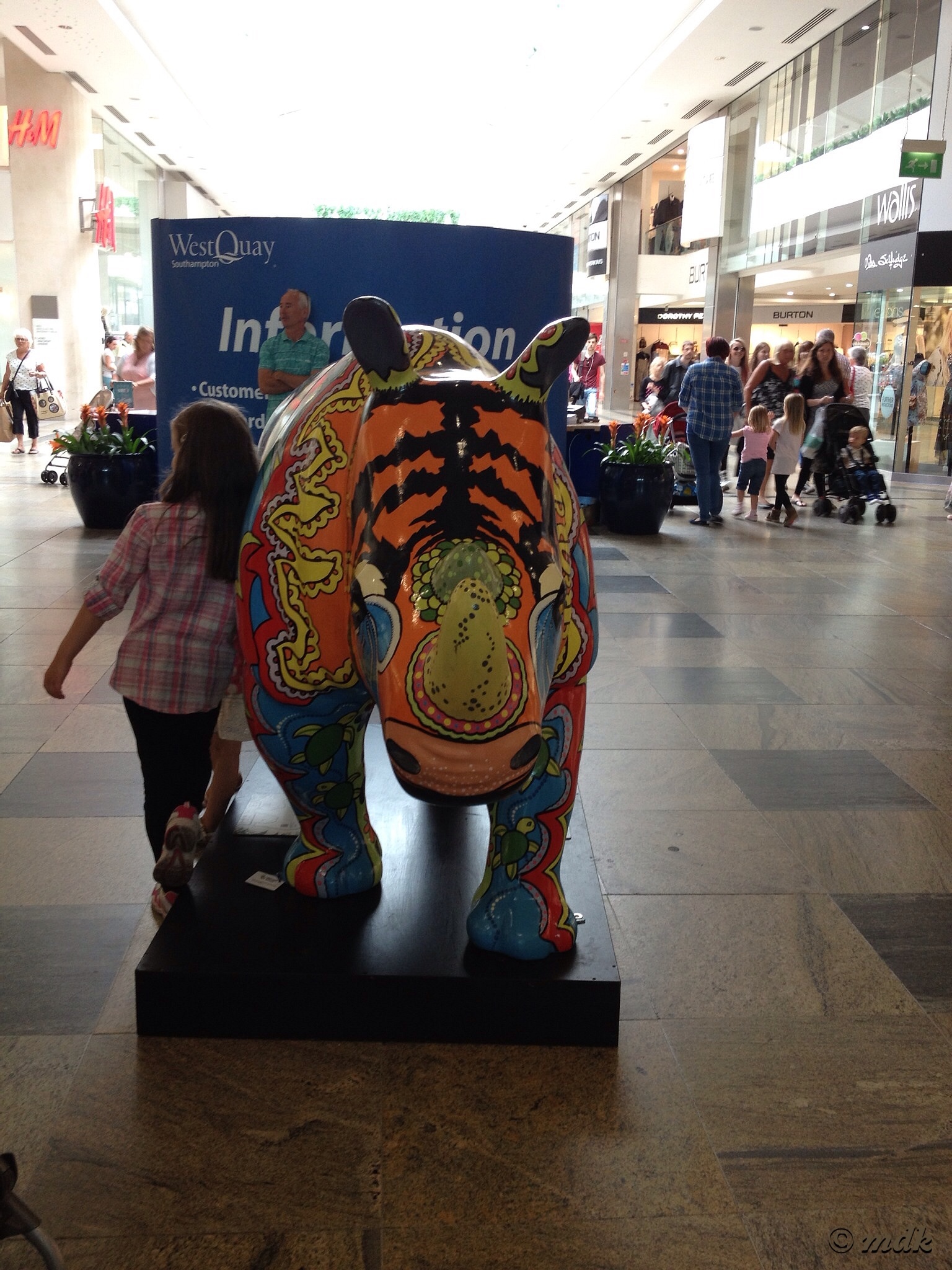 Ringo’s paint job is inspired by the Mexican holiday ‘Day of the Dead,’ which is about remembering the lives of lost loved ones. The vibrant colours hide a secret, when you look a little closer, you can see he is a kind of jigsaw puzzle of other endangered species. I spotted tiger stripes, giraffe splotches, a dolphin swimming and some snakes, there may be more, it was a little too busy to stand and stare and we had to get back to work. 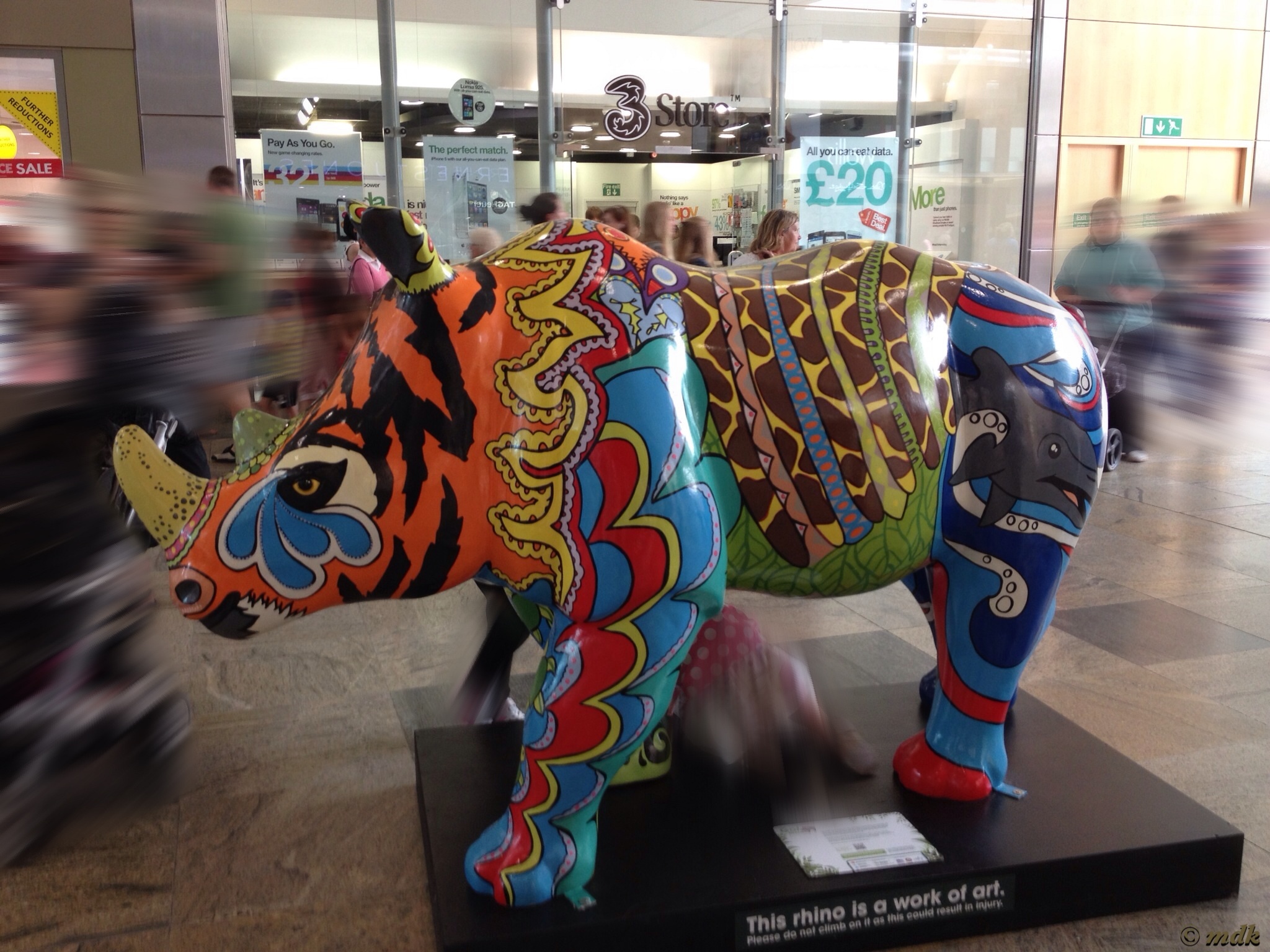 We walked back through the parks to see the next rhino on the list, number fourteen. Actually I saw him on the very first day, on a truck, not yet delivered. He was in better shape then too because sadly, along with a couple of other rhinos, this one has been vandalised. I find this rather hard to understand. Why would someone want to destroy or damage a thing of beauty? 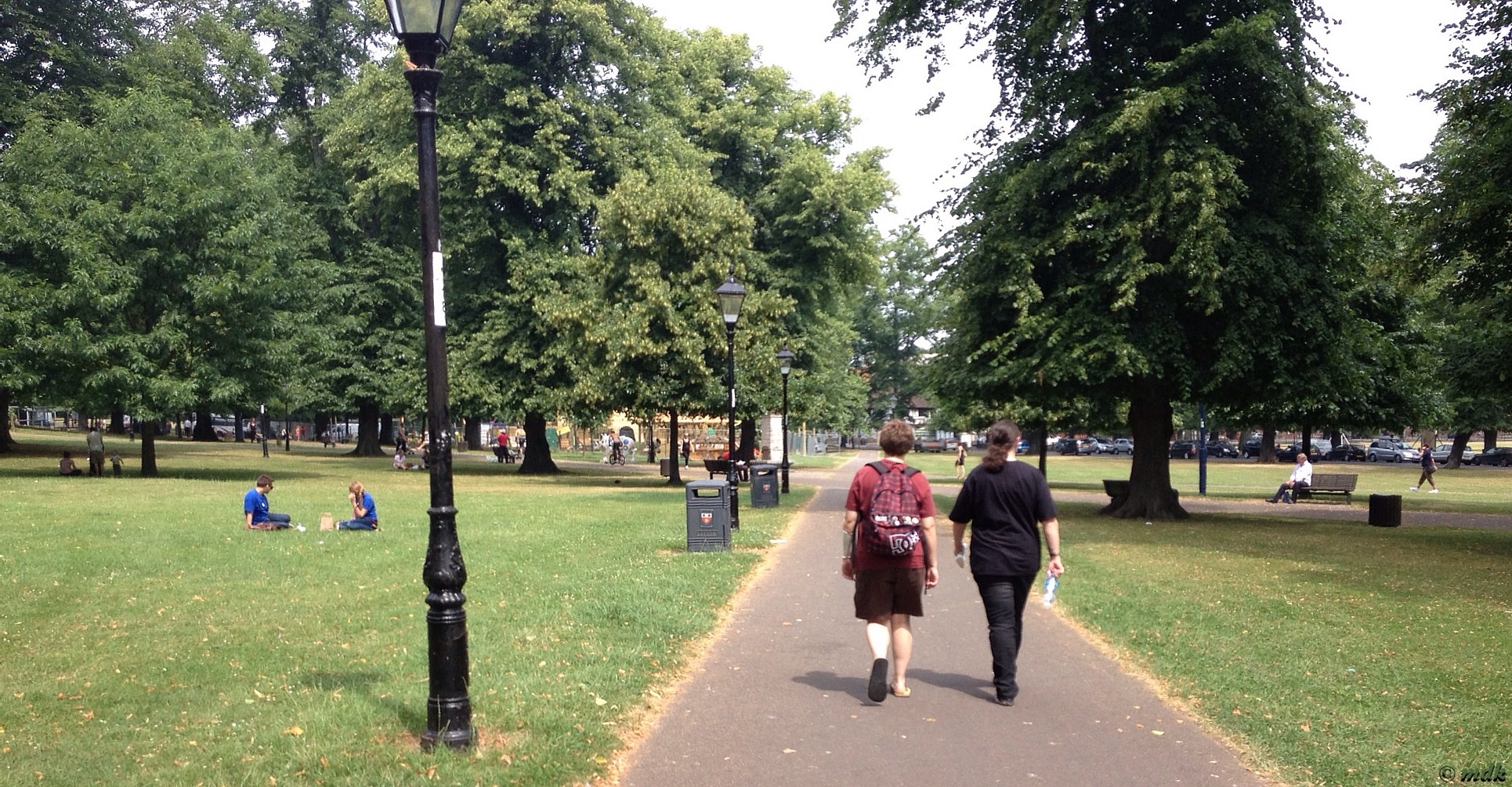 Anyhow this rhino, slightly damaged, is called Not a Target, which is kind of ironic as that is exactly what it’s been used for. Not a Target was designed by French artist Julien Masson of Artsim, a collaborative project exploring a mix of graphic design and contemporary art online. The design, using patterns associated with target practice, is aimed at reminding us that rhinos are all too often a target in the wild. 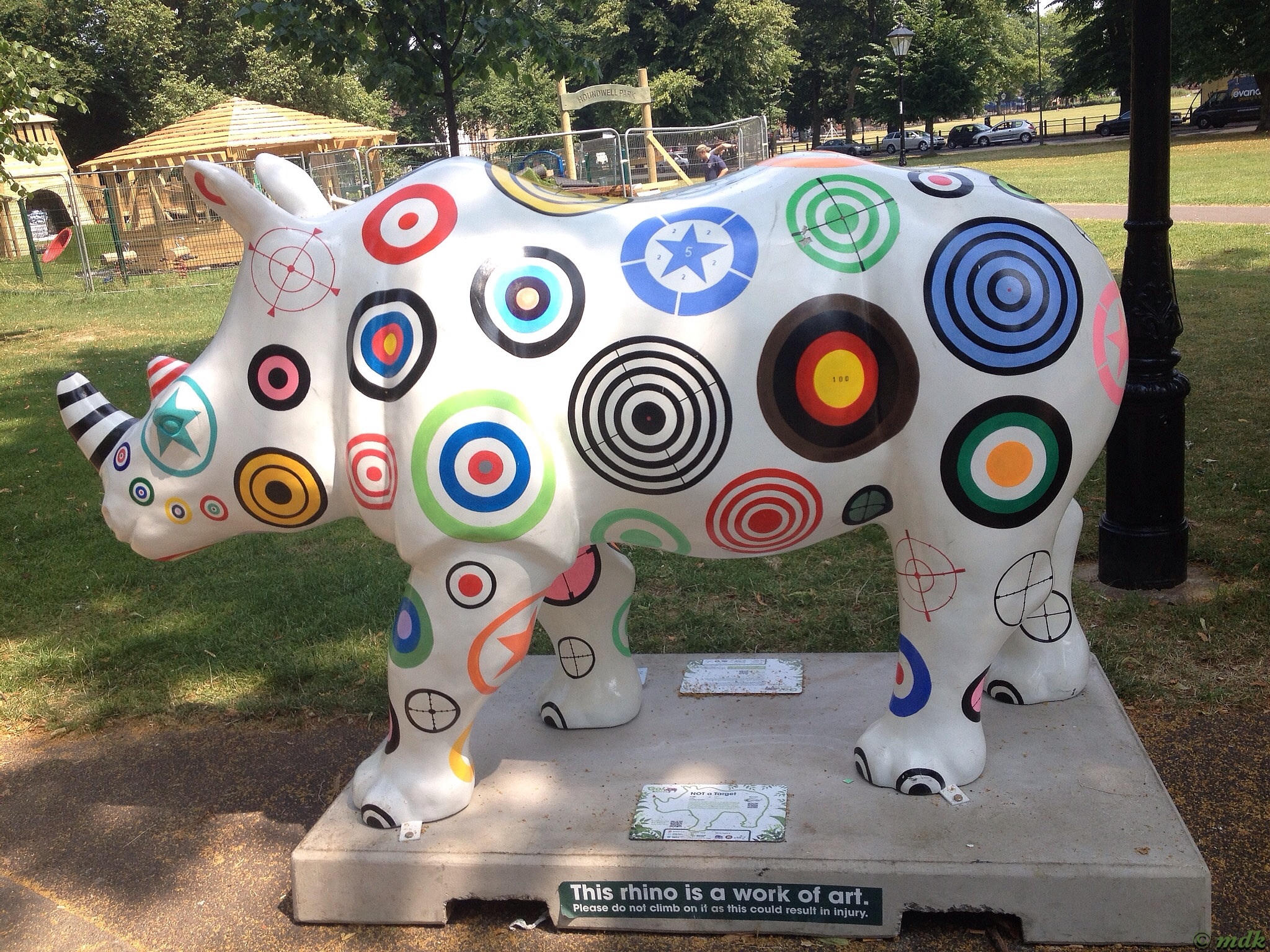 The rhino was actually painted by Michael Foyle, a freelance photographer, specialising in documentary style journalism. He is sponsored by Greenspan Projects who design and construct urban and rural landscaping and play areas. I wonder if they’re responsible the the new play area right behind the rhino? This summer, through their Project Bambouti scheme they have raised funds to send a shipping container filled with playground equipment to Africa to brighten the lives of children there.

Back at the office the afternoon was spent tracking down and pricing travel guides. It may have been a little quicker had the Internet not decided to have a go slow afternoon. Frustrating but par for the course. As usual the day came to an end far quicker than I expected.

It was a sad end to the day, knowing Gigi and I would not be working together again. She managed not to cry when we presented her with her flowers and her gift. Hats off to her for that, I’d have been crying if it had been me. She had her car with her and enlisted my help with the flowers in a vase she’d got from one of the advertising companies she works with and the orchid we gave her. In exchange for a lift home I sat with them on my lap so nothing got spilled or damaged. Oh well, I had a good dash around at lunchtime and there will have to be walking tomorrow no matter what.