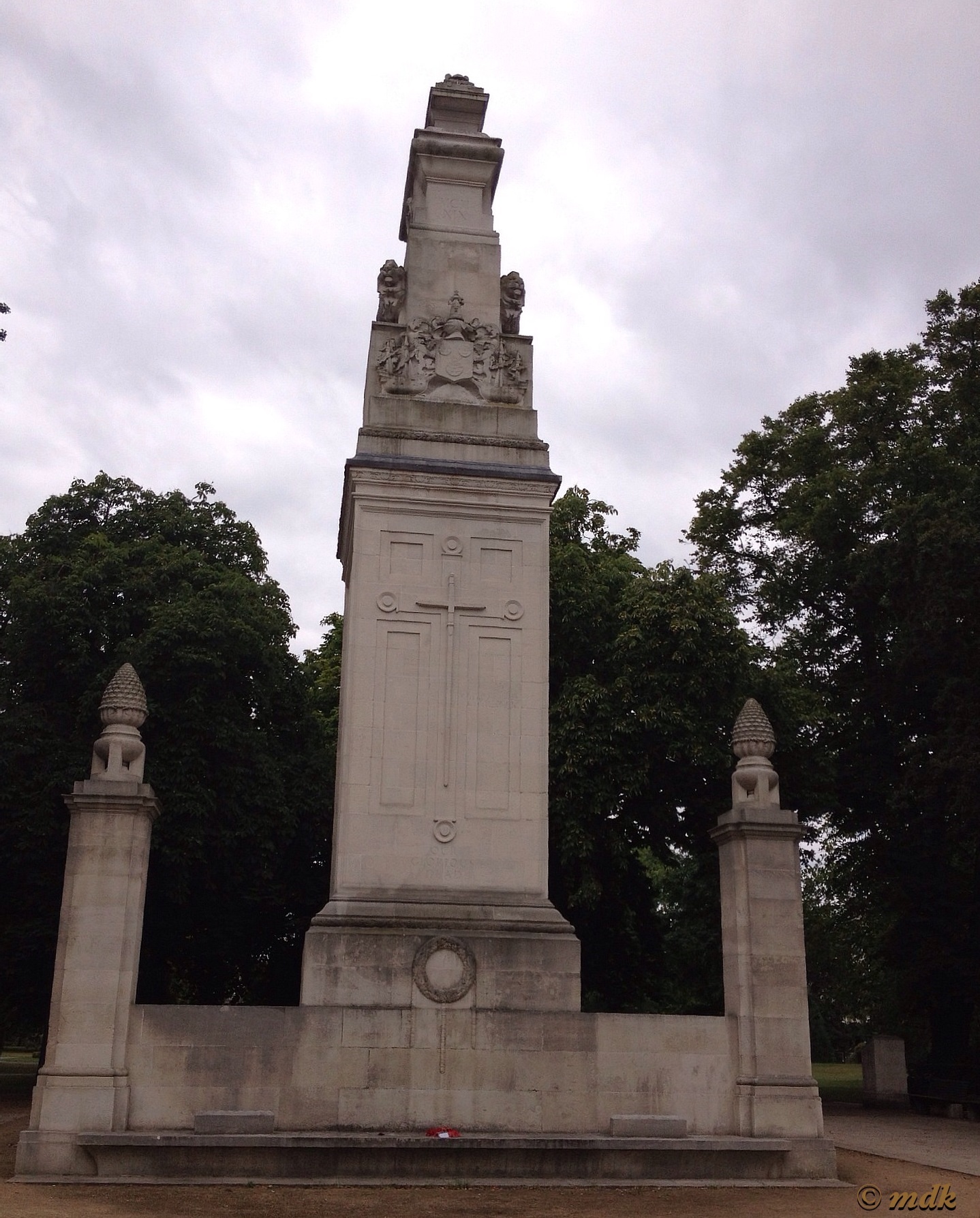 There was one park left and three more rhinos to find before I went home. These were the Andrews Park rhinos. Also known as East Park, this park has the highest concentration of trees, shrubs and plants of all the city parks and, when I worked at Dream Factory, I used to love walking through the wonderful wisteria pergola every morning, wondering at the beauty and the way the under planting changed with the seasons.

Before I crossed the road to search for the Andrews Park rhinos there was a momentary stop in front of the cenotaph. When I worked at Dream Factory not a day went by when I didn’t stop for a moment at the monument and think of all the soldiers it represented. There was a small poppy wreath on the steps, there always seems to be one there and I’m glad of that, glad someone else remembers.

The next rhino, number thirty one, was a pretty easy one to find, in fact, I could see it as I walked away from Flossy because it was on the pavement opposite. Of course there was the small matter of getting across the road and, as it was Saturday afternoon, the traffic was quite heavy. I stood in front of the cenotaph for ages waiting for a gap. Beside me a woman was talking on her phone, also waiting to cross, and I couldn’t help overhearing her conversation. “Yeah, I’m by the cenotaph, just trying to cross the road. I’ll meet you by the Titanic Memorial. Oh wait, there’s a painted hippo on the pavement, I’ll be standing next to that, ok?”
You’ll be happy to know I resisted the temptation to point out that the hippo was actually a rhino and they were all over the city. Had she been living under a rock?

Eventually we both managed to get across the road and, as the woman was true to her word and went to stand right in front of the rhino, I walked up to the Titanic Engineer’s Memorial and took a few photos until her friend arrived and they walked off. Not that I’m complaining because the memorial is a thing of beauty with her angel wings and a wonderfully crafted backdrop of ship’s engineers. 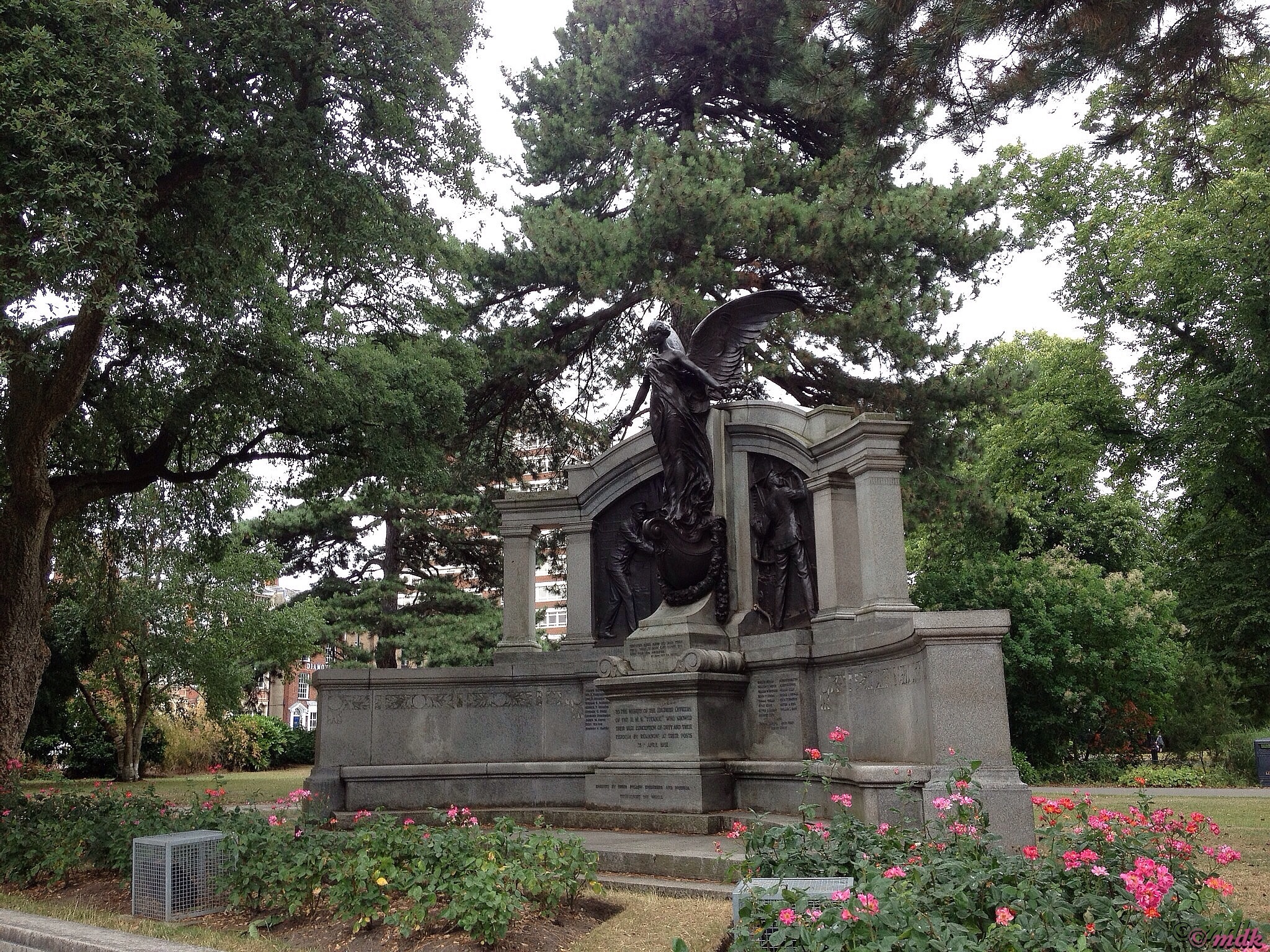 There are lots of memorials dedicated to the Titanic in Southampton and with good reason. When she left Southampton Docks on 10 April 1912 six hundred and fifty nine of the eight hundred and eighty five crew members came from Southampton. Seventy eight percent of the crew were lost on the night of 15 April when she hit an iceberg in the North Atlantic sea. That is not even counting any of the passengers who came from the city. More than five hundred and forty of those lost were citizens of Southampton, mostly young men. Hardly a street remained untouched by death.

On to happier things. Eventually the friend of the woman who can’t tell a hippo from a rhino turned up and I took my chance to have a look at Augustus, sponsored by Totton College. He was painted by four of their eighteen year old students Maddy Carter, Lauren Cron, Becky Feltham and Sophie Milner. The lucky quartet of art students won a competition to design their college’s rhino. The four different designs came together to produce a fabulously colourful geometric coat for Augustus. They should all have successful careers ahead if the result is anything to go by. 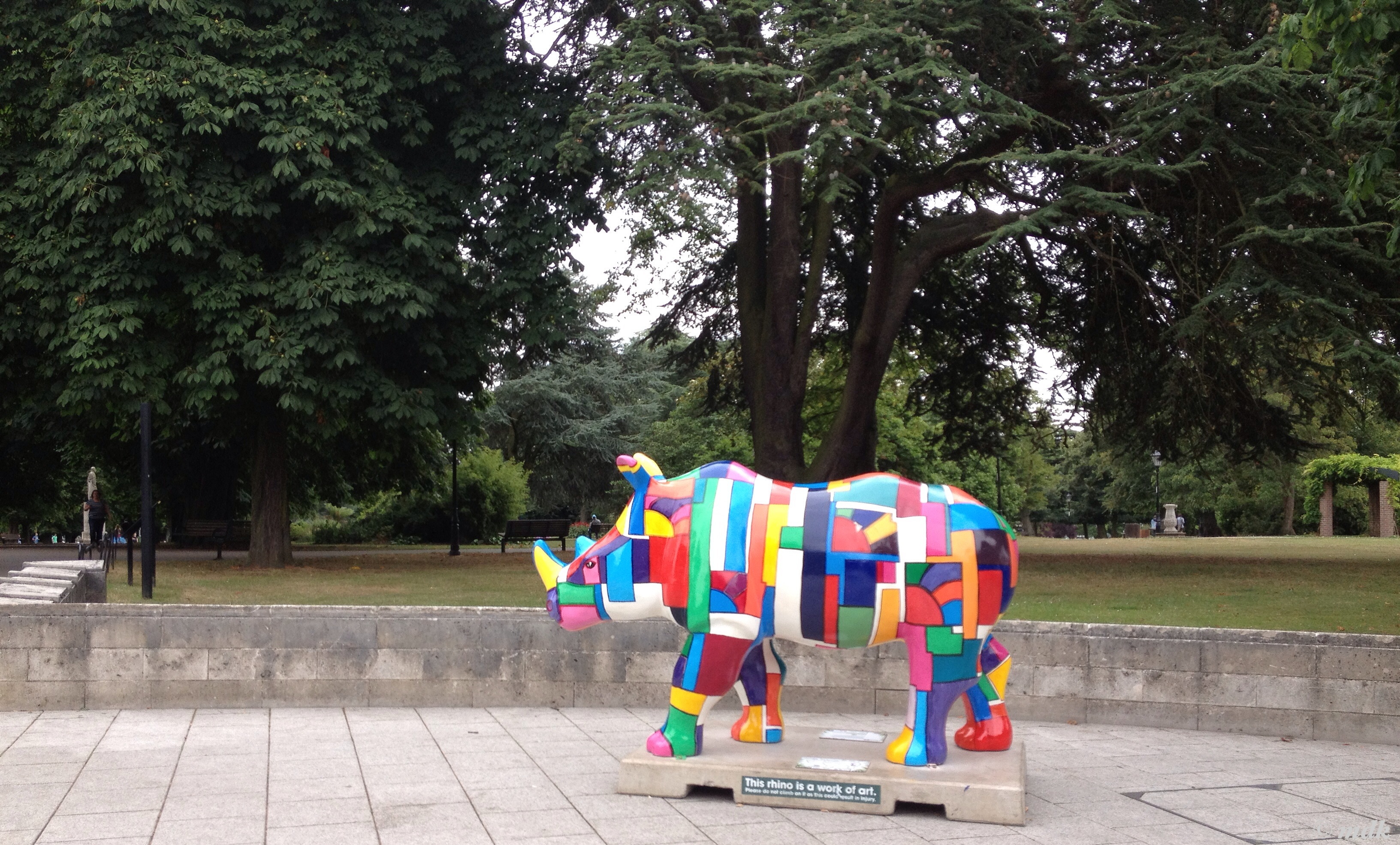 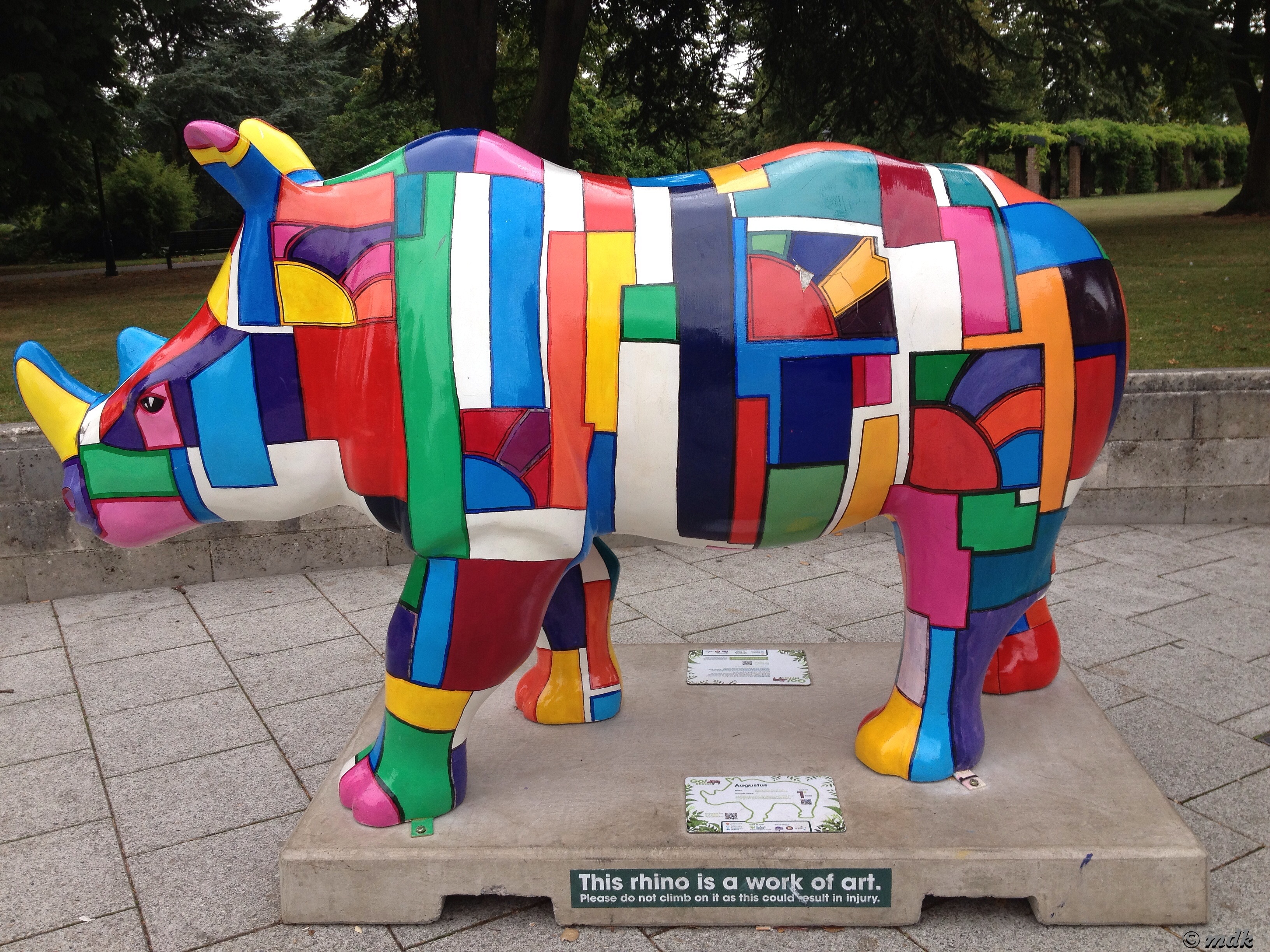 Rhino number twenty six was, as far as I could tell, inside Andrews Park. Like so much else on my Saturday rhino safari, the pergola was a pleasure I didn’t have time for. Instead I strolled through the trees towards the cafe in the old pavilion which was when I spotted a flash of red and white hiding between the trees at the edge of the path. This was Rohan, sponsored by Southampton Solent University and painted by graphic designer Matt Jacobs. Matt’s work is usually inspired by the female form, beautiful line drawings with bold colours, Rohan reflects this minus the females of course. The idea was to capture the arid landscape of the African plain where rhinos roam free. 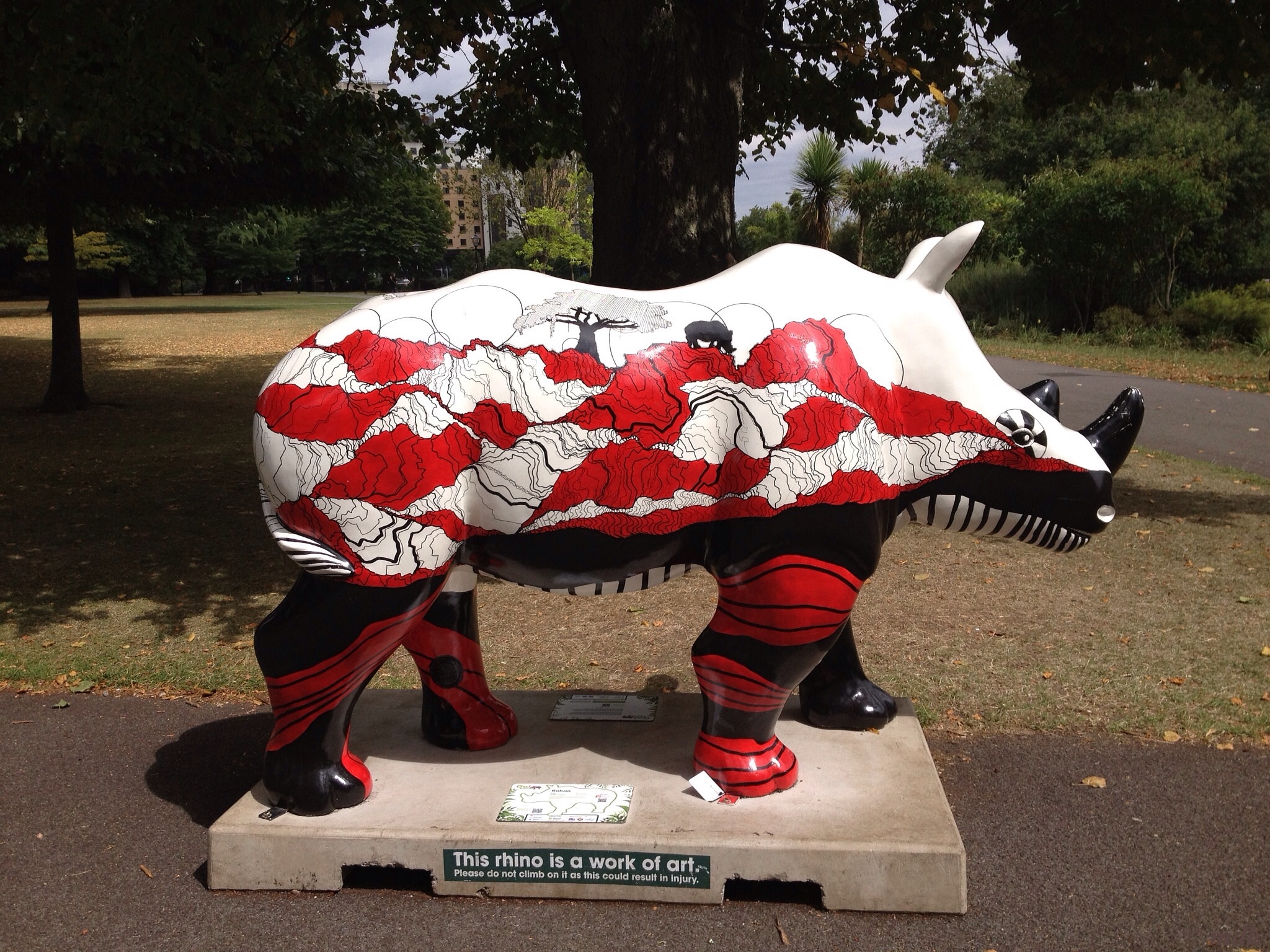 The intricate web of lines were certainly eye catching, as was the stark black and red colour scheme. These are the also colours of Southampton Football team, whether this is by coincidence or design I’m not sure but it made me smile. I had to wait to take my photos because a young lad was taking his own but it just gave me more time to watch the bees frolicking in the bed of ornamental thistles nearby. 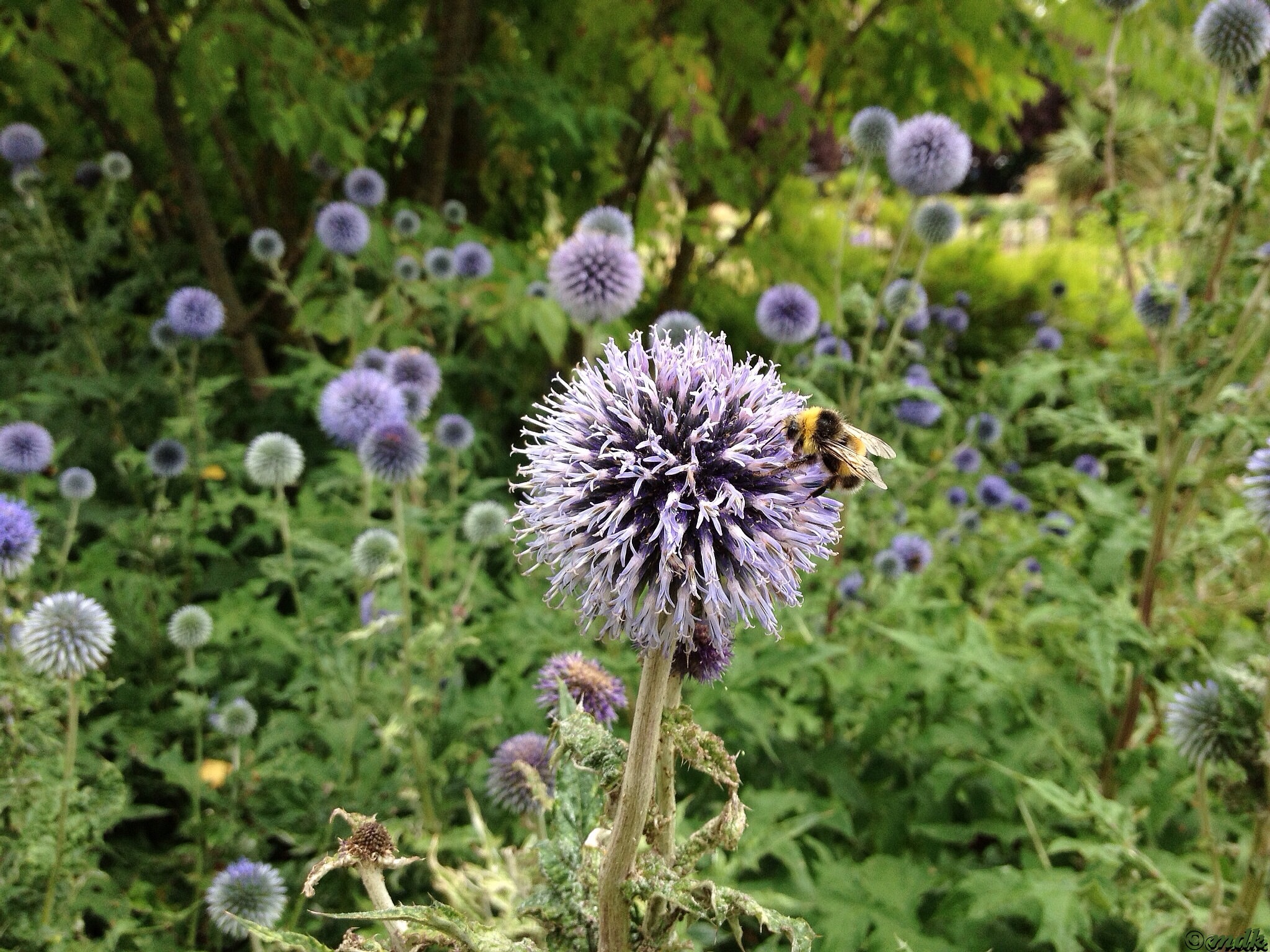 By this time I’d more or less lost count of how many rhinos I’d seen, especially as I hadn’t come upon them in order, and I wasn’t sure if there were more or not. When something caught my eye amongst the flower beds I didn’t think it was a rhino at all at first. 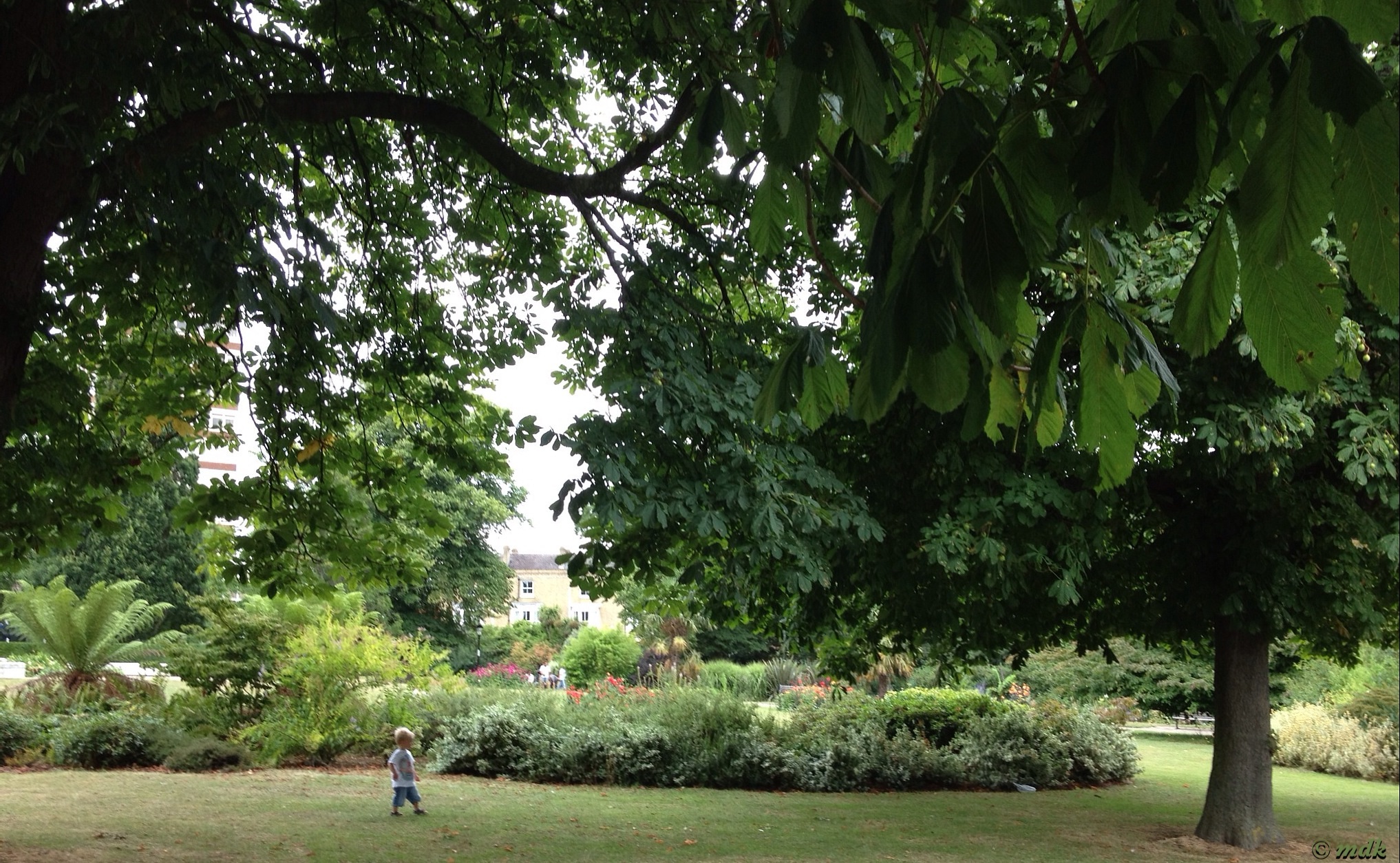 It was though and it was hidden away in the mosaic garden. The garden itself is concealed amongst the other flower beds and easy to miss if you don’t know it’s there. Created in 2000 to mark the site of an old fountain it is surrounded by a wavy wrought iron fence. Inside the planting is minimalist, a border of box hedge and grey leaved curry plant. The real star of the show, apart from the rhino of course, is the circular central mosaic and the pretty benches set around the perimeter so you can sit and enjoy it. 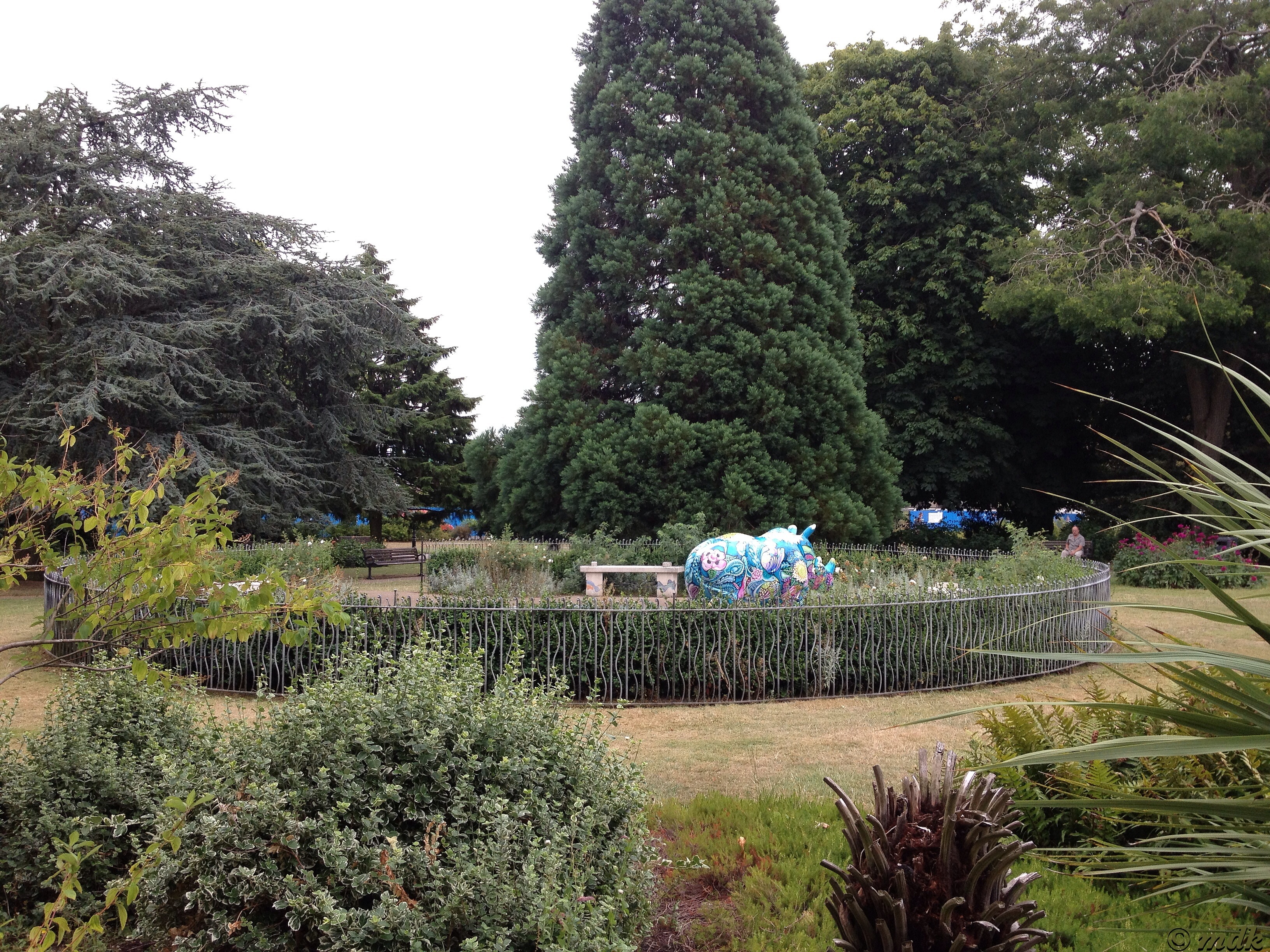 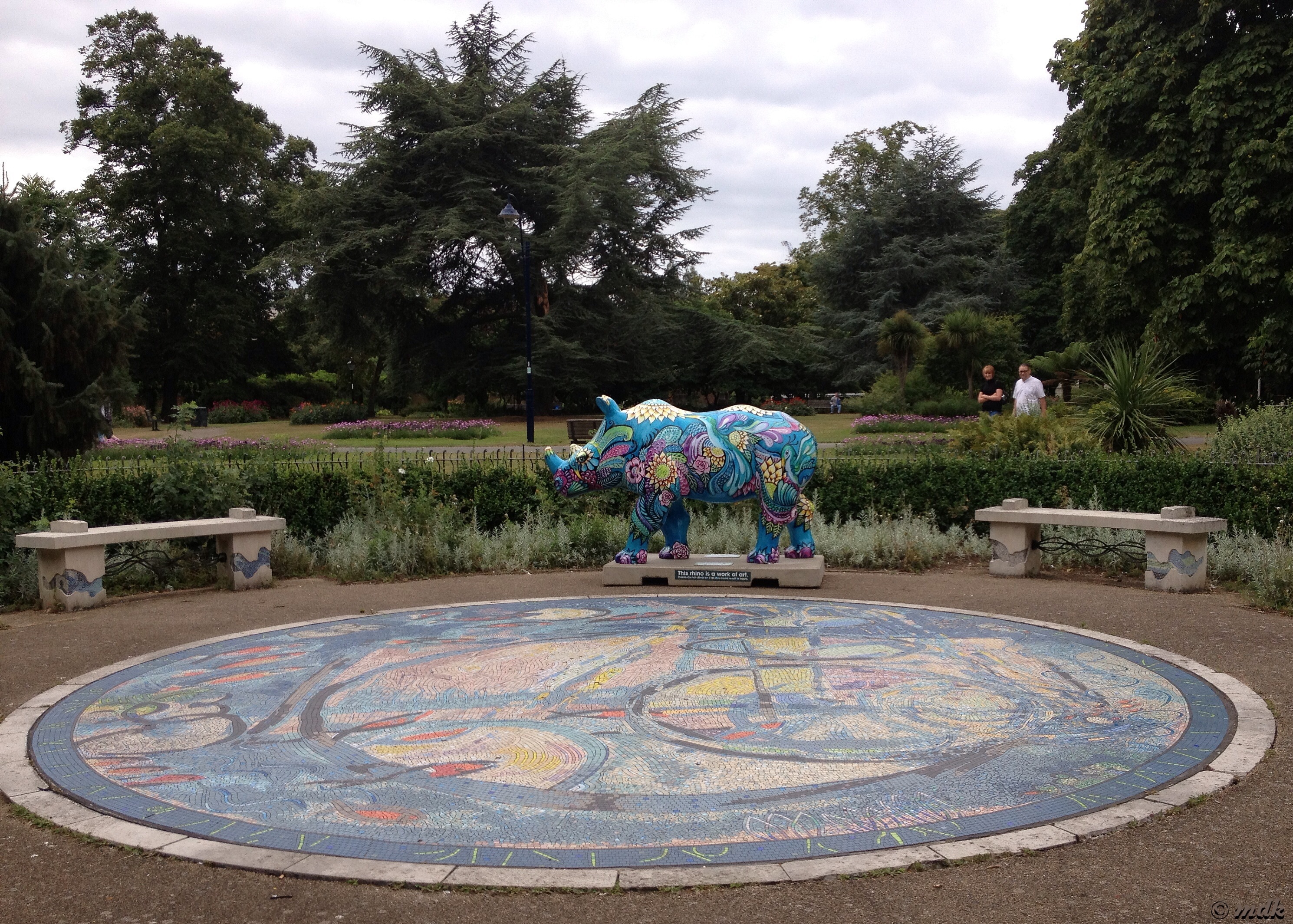 Sponsors Festival Place shopping centre in Basingstoke chose artist Sian Storey, who also painted Wonderland, the rhino outside Holyrood, to create their rhino. Beauty and the beast may be from a more subdued colour palette to complement the mosaic but the similarity in style is unmistakeable. With a riot of fabulously exotic flowers and delicate birds almost invisible amongst them the beauty in the piece was unmistakable, I guess the beast must be the rhino. 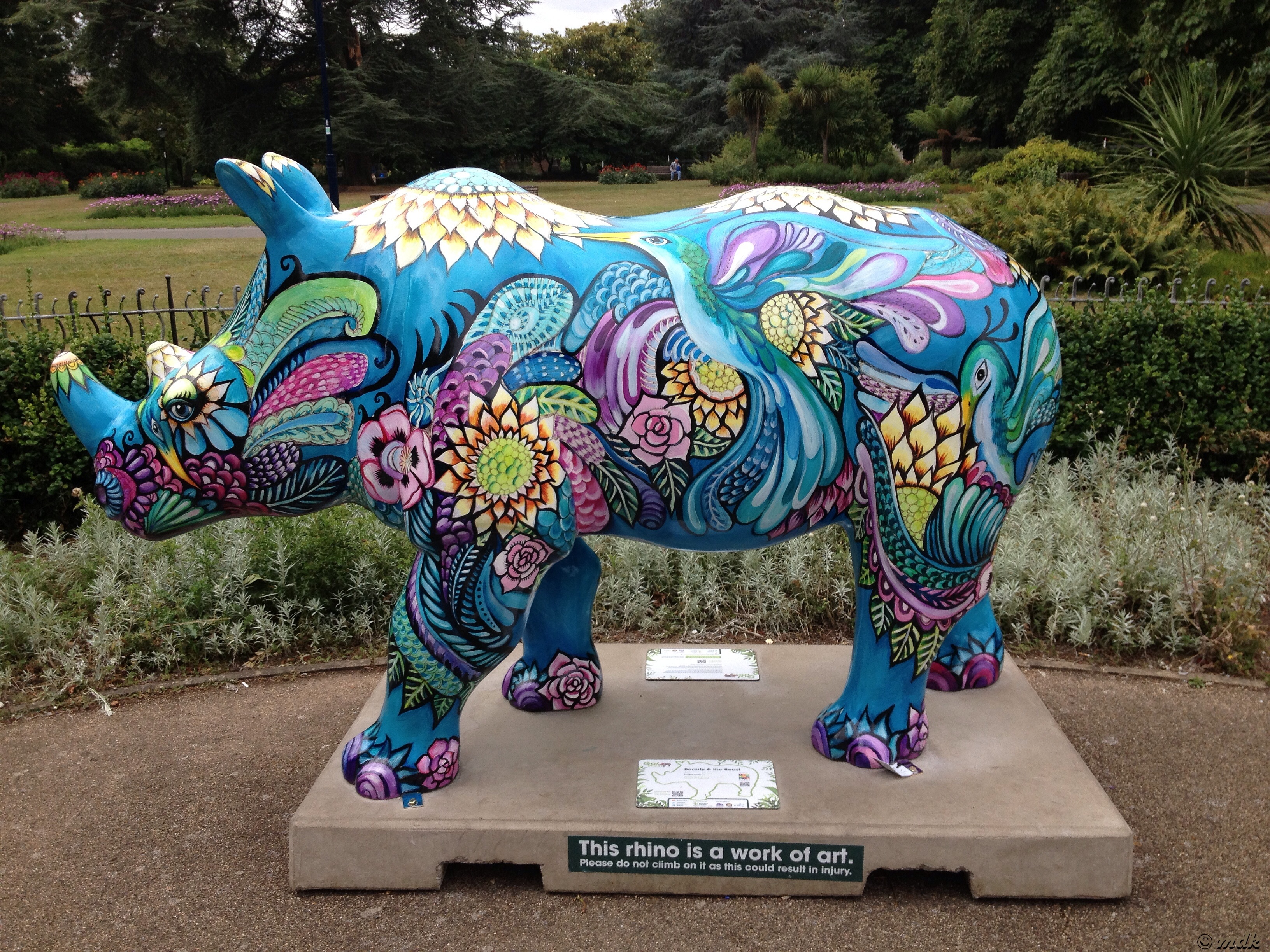 On a day less crowded I might have strolled through the parks looking at flowers and enjoying the sun. Today though it was mostly about finding rhinos and trying not to get angry with all the parents who stood by watching as their children clambered all over them, kicked them or threw sweet wrappers all over the park so I went off to the pavilion in search of a much needed skinny latte to sustain me for the walk home. 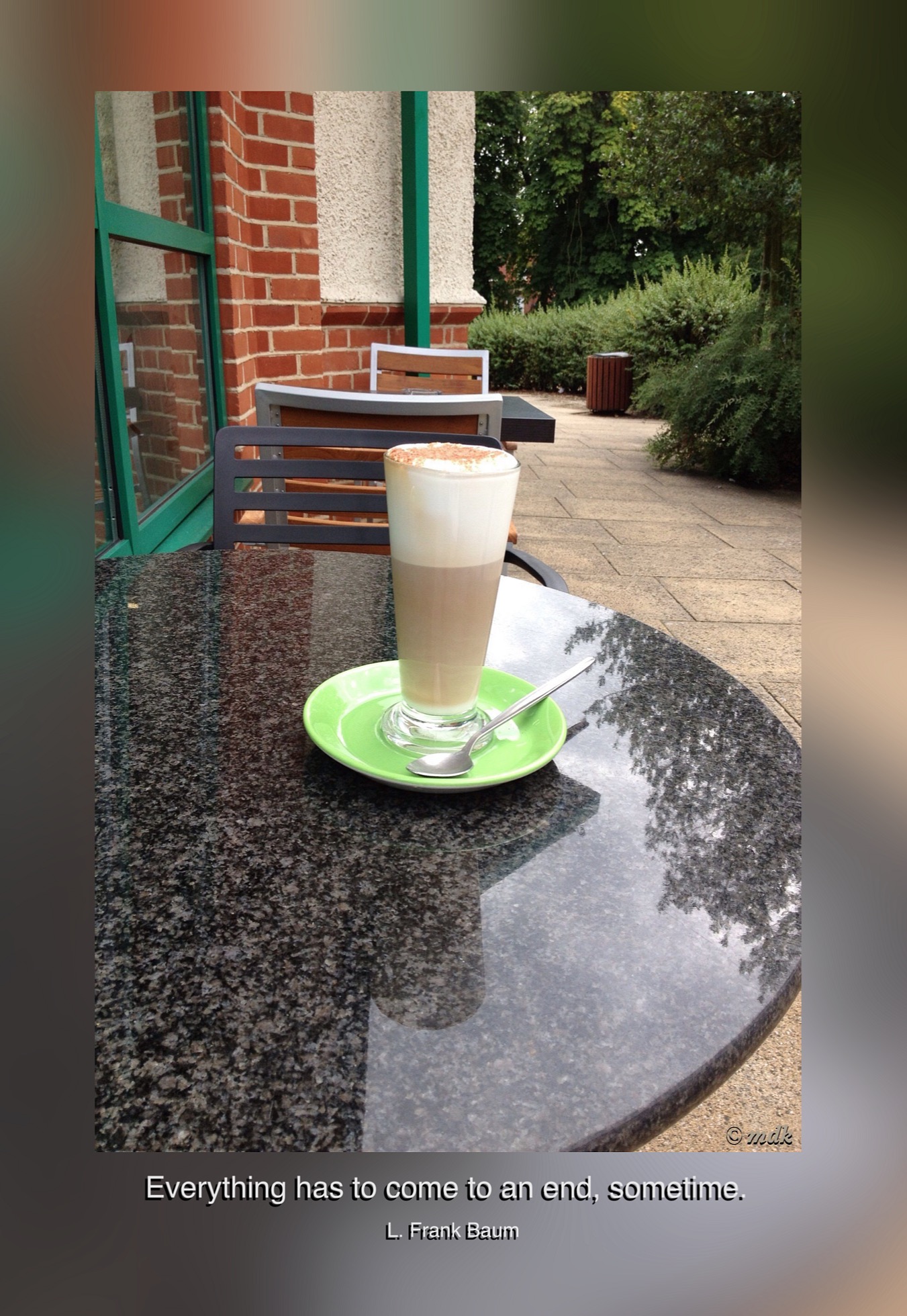 So the city centre trail has come to an end but there are still four more out of town rhinos to come. Watch this space…