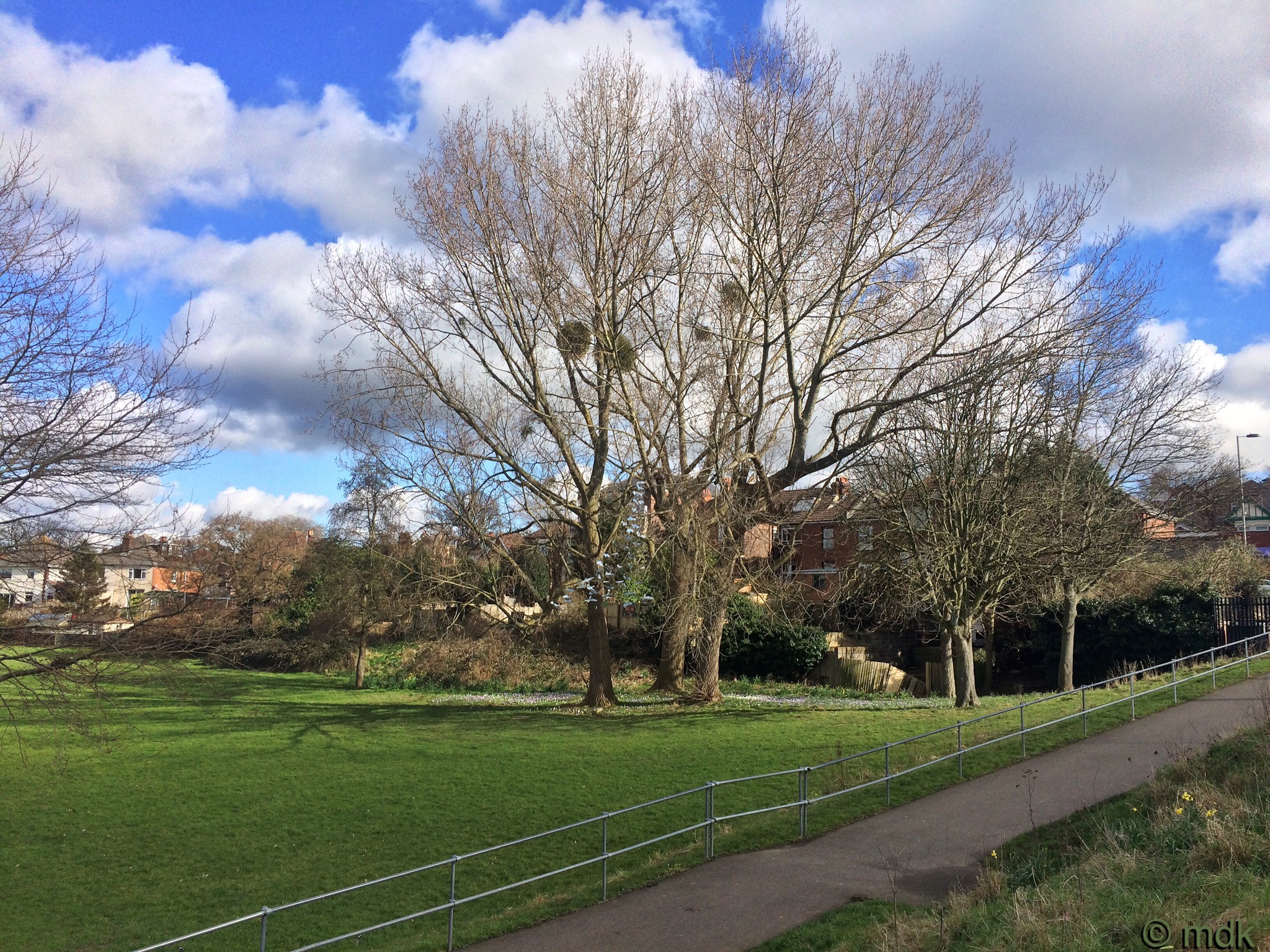 St Denys is a small place, easily overlooked. Like many people, I regularly pass through, usually on the way somewhere else, without really giving it much thought. This does it a disservice though because St Denys has hidden secrets and today was the day I sought them out.

Back in 1124, Henry I founded a priory here close to the banks of the River Itchen. He  dedicated it to St Dionysius, the third century Bishop of Paris who was martyred when his growing following became a threat to pagan priests. After he was beheaded with a sword he’s said to have picked up his head and walked six miles, preaching a sermon of repentance. This seems unlikely but Parisians made him their patron saint and the French name Denis is derived from his name as is the name of St Denys itself.

During the French raids of 1338 much of St Denys Priory was burnt and the consequent fortification of the town left it in a great deal of debt. Even so, by the time of the dissolution of the monasteries, St Denys Priory held a large amount of land and was once again rich.  In 1538 the site was granted to Francis Dautry and the priory fell into ruins. Eventually a farm was built on the land using the ancient priory stones then, in the mid ninteenth century, even this was demolished.

Today all that remains is a fragment of a stone arch in a back garden in Priory Road. Another arch has been rebuilt in the gardens of Tudor House. After a lot of looking at maps I thought I knew where the ruined arch was so I set out towards the river in search of it. It was a beautiful day for a walk. A carpet of purple crocus below the sculpture of the glittering geese made me smile as I came to the bridge. On the opposite bank the St Denys houseboats kept that smile on my face. 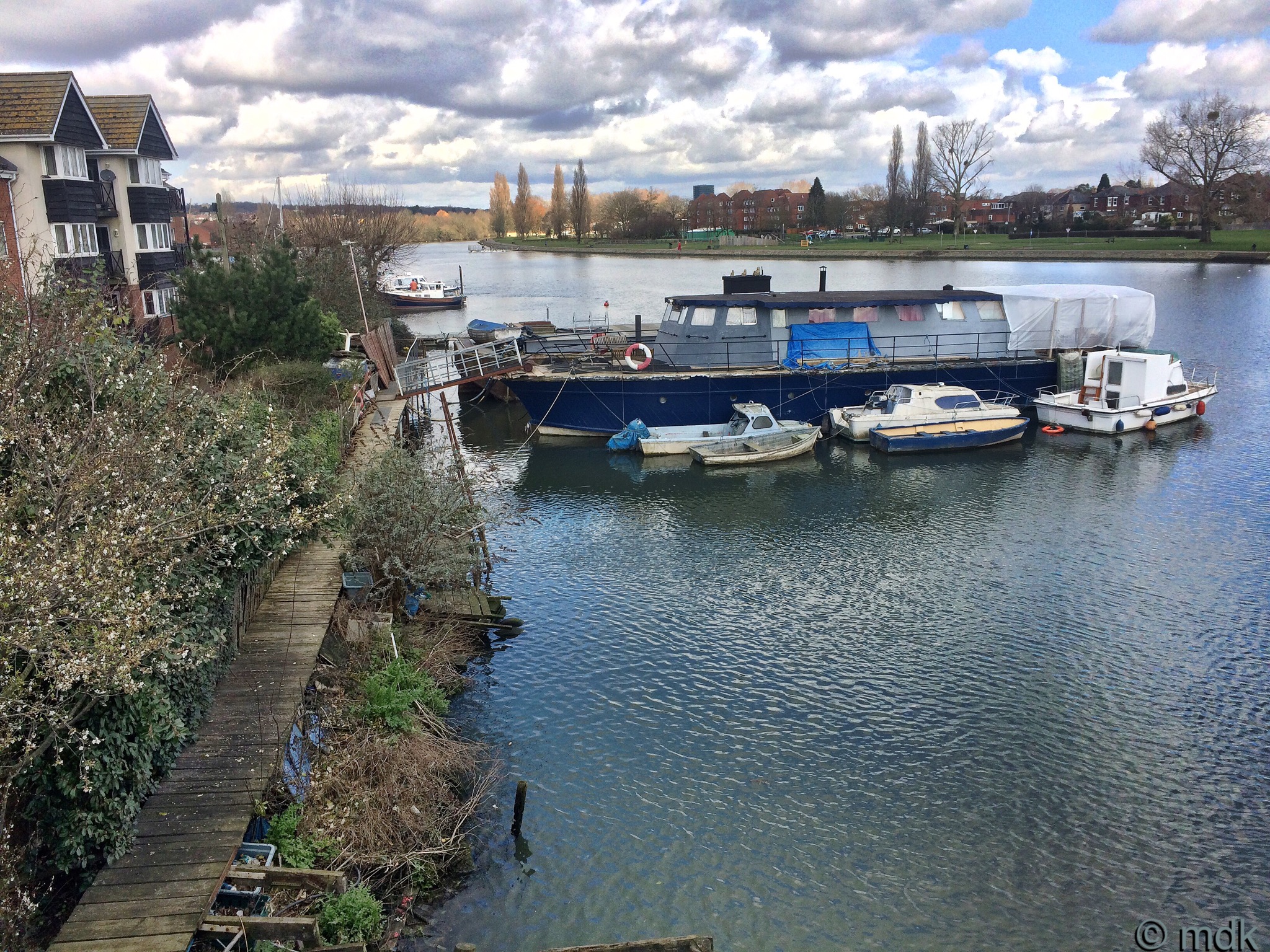 In no time at all I was wandering along Priory Road with my new found knowledge, peering between houses trying to spot the ancient stones. This is not the first time I’ve looked for them and I admit, even with a house number, I walked past once without seeing them. They are hidden, not just between two houses, but also by a cloak of ivy that has formed a tree like top knot. Perhaps if I’d been more daring I’d have knocked on the door and asked for a closer look. It must be quite something to have such historic remains in your back garden but, it seems it’s not without its downside. Apart from people wanting to get into your garden to take pictures you’d also have to contend with ghostly bells in the middle of the night. At least, that’s what locals say. 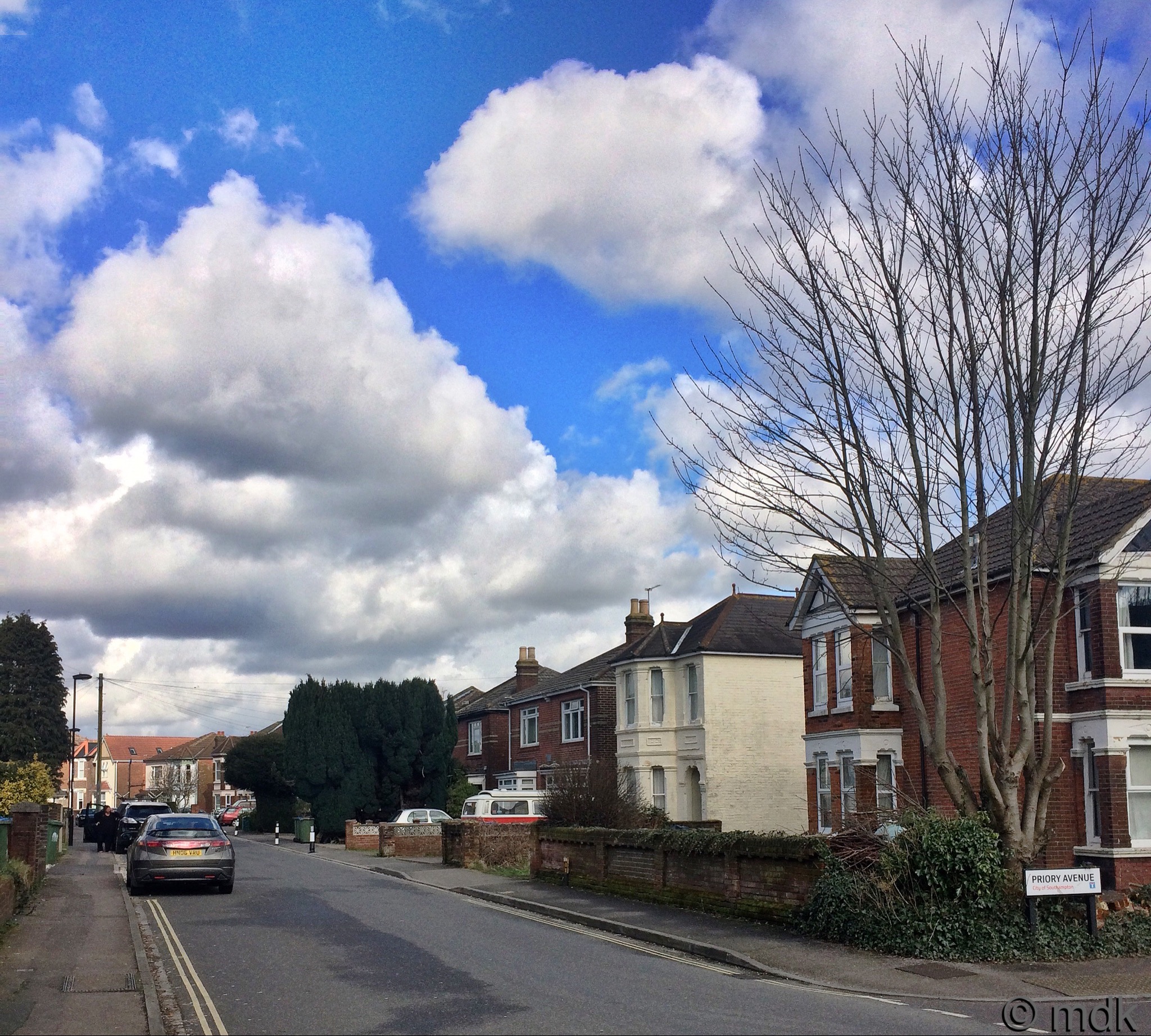 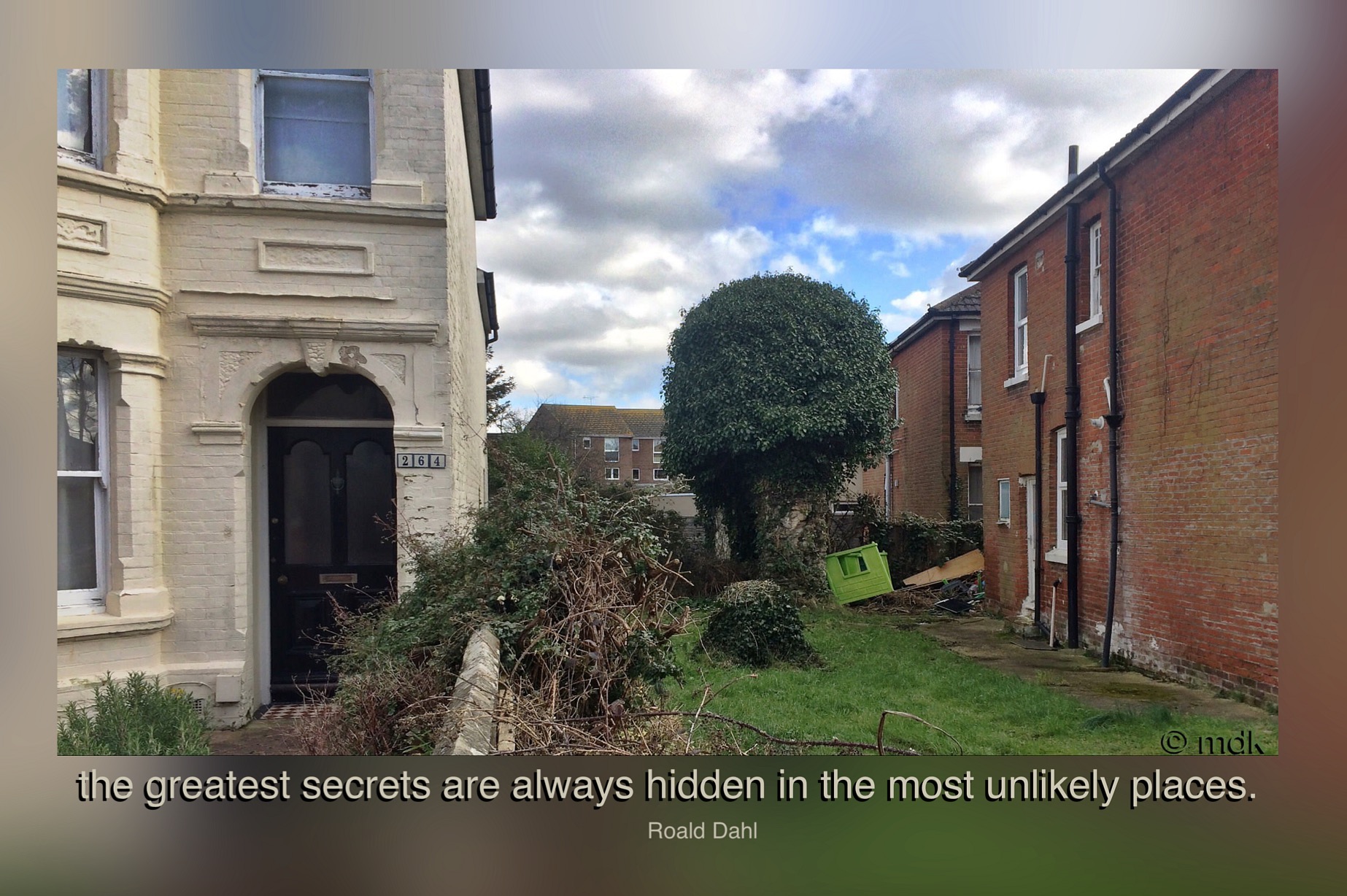 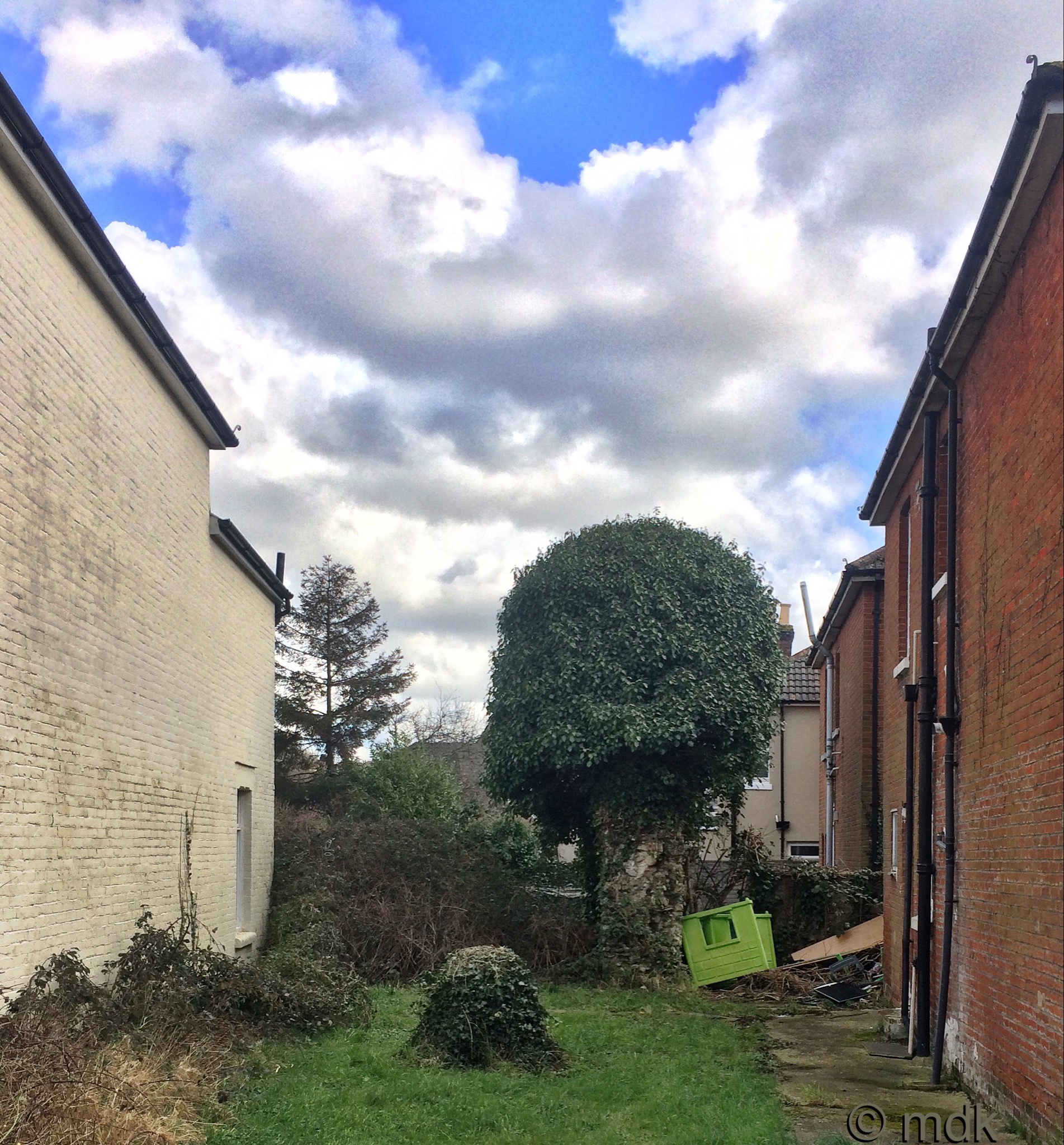 Feeling quite pleased with myself for finding one of the few remaining pieces of the priory, I carried on towards the church. My plan was walk a circular route, taking in a few of the interesting sights before returning by way of the board walk. As usual, things didn’t go quite to plan though and I ended up discovering there were more hidden secrets in St Denys than I had thought. 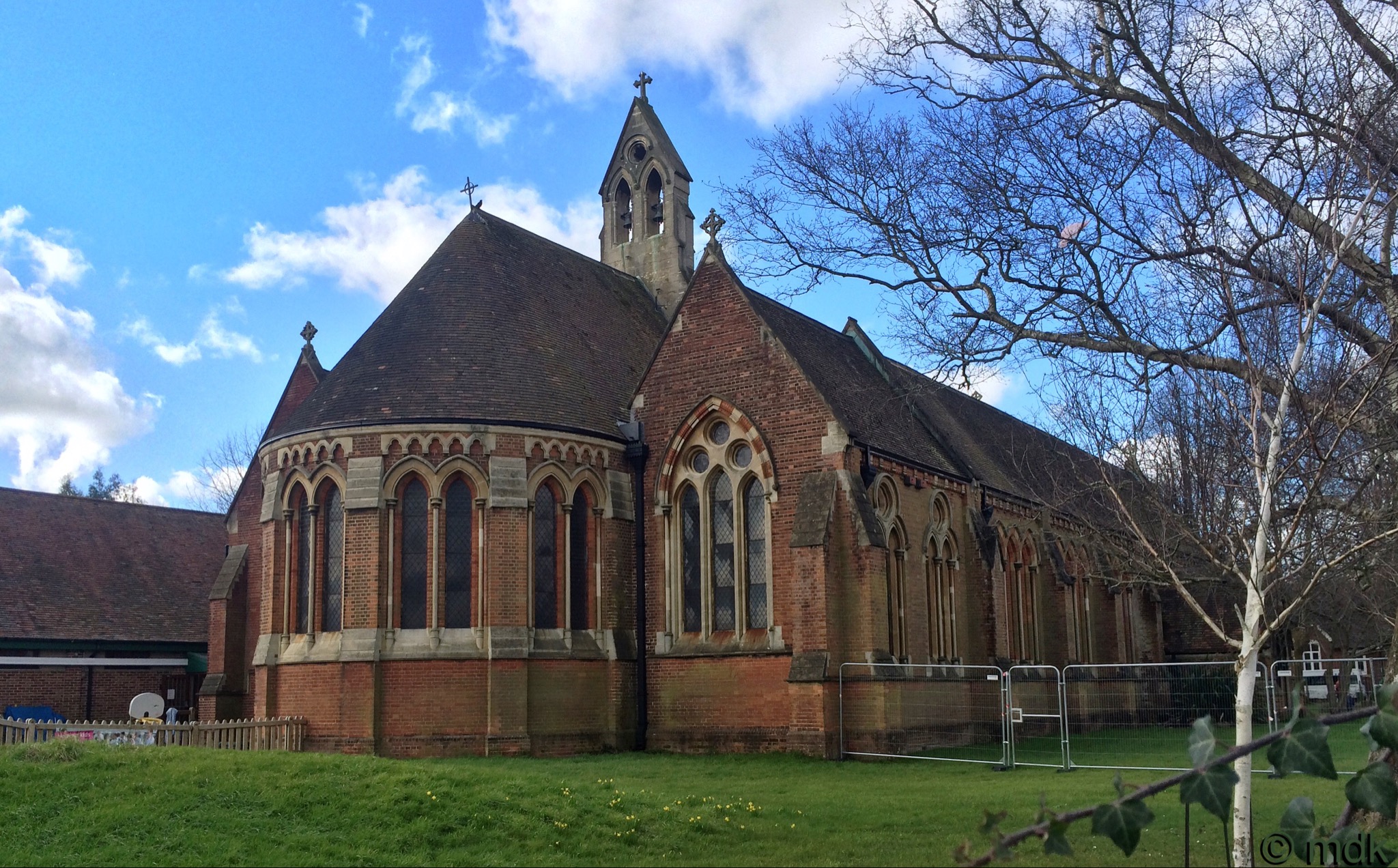 St Denys Church was built in 1867 by architect Sir George Gilbert Scott who also built St Pancras Railway Station in London. In fact the combination of red brick and warm Bath limestone is very reminiscent of St Pancras. In 1889 the south aisle was added and seven years later a vestry that has since been demolished. In 1910 a church hall was added but this was also demolished in 1996 and part of the land sold to a housing authority. The next year a Church Centre was built incorporating material from the demolished hall and vestry.  The church seems to have been undergoing renovations for a long time so I was quite surprised to see a sign on the door saying  it was open. This seemed at odds with the barriers on the lawn and the closed door so, scratching my head, I walked past. 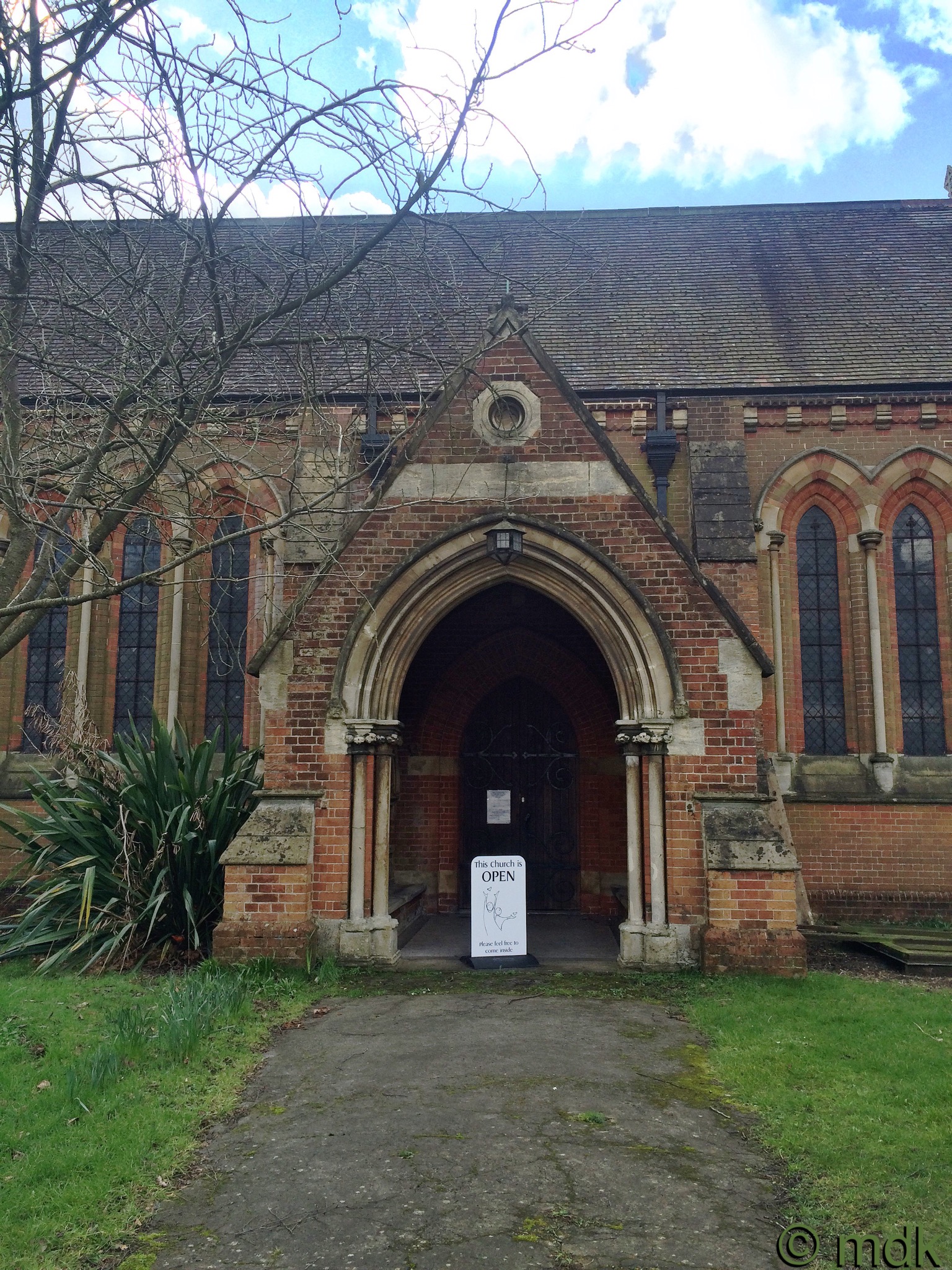 When I came to the corner though, I remembered there was another door and, on the off chance, went around to see if it was open. It was so, after stopping to admire the decorative stone work, I went inside. As this is a relatively modern church I wasn’t really expecting too much other than a few stained glass windows. 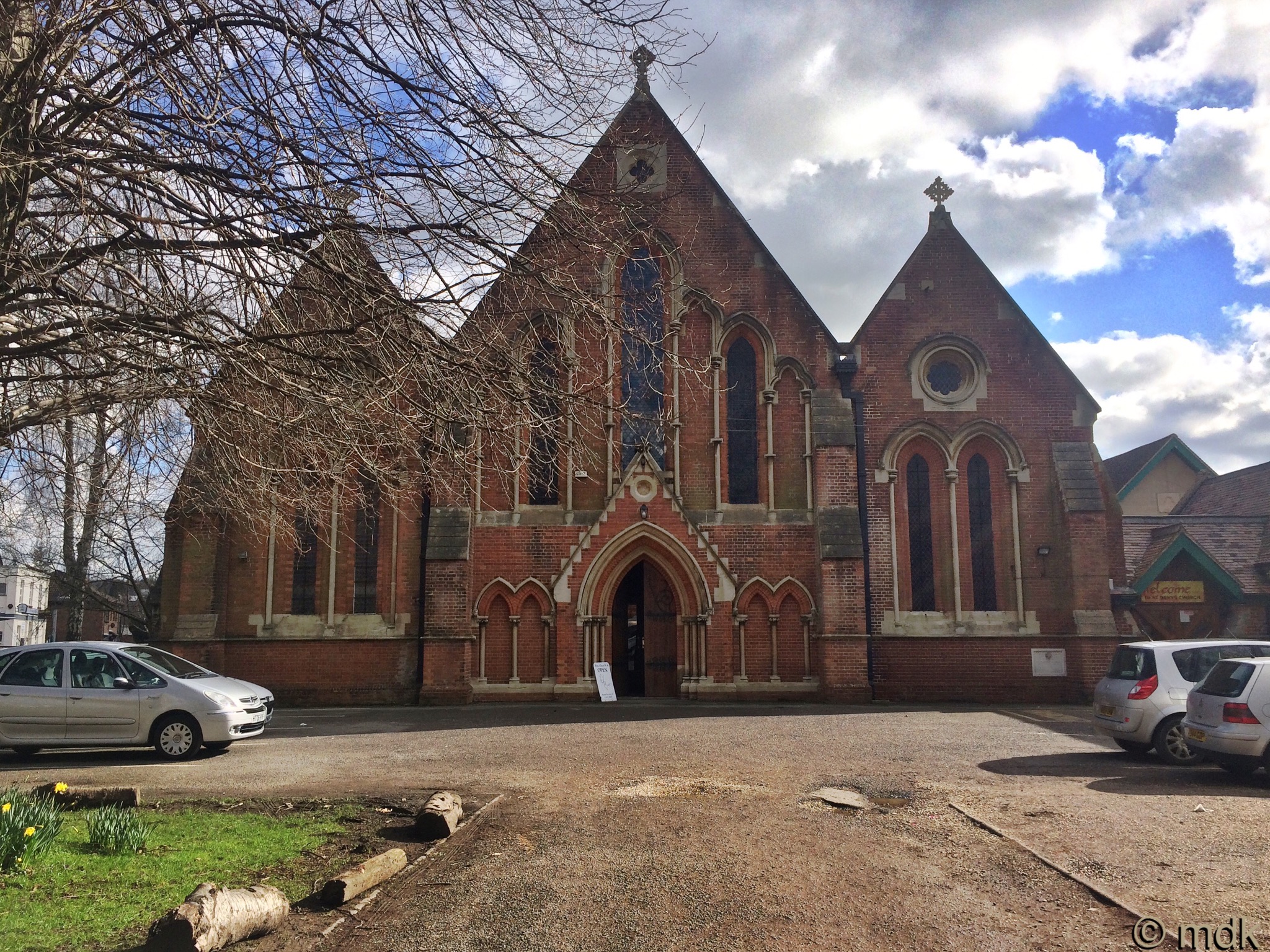 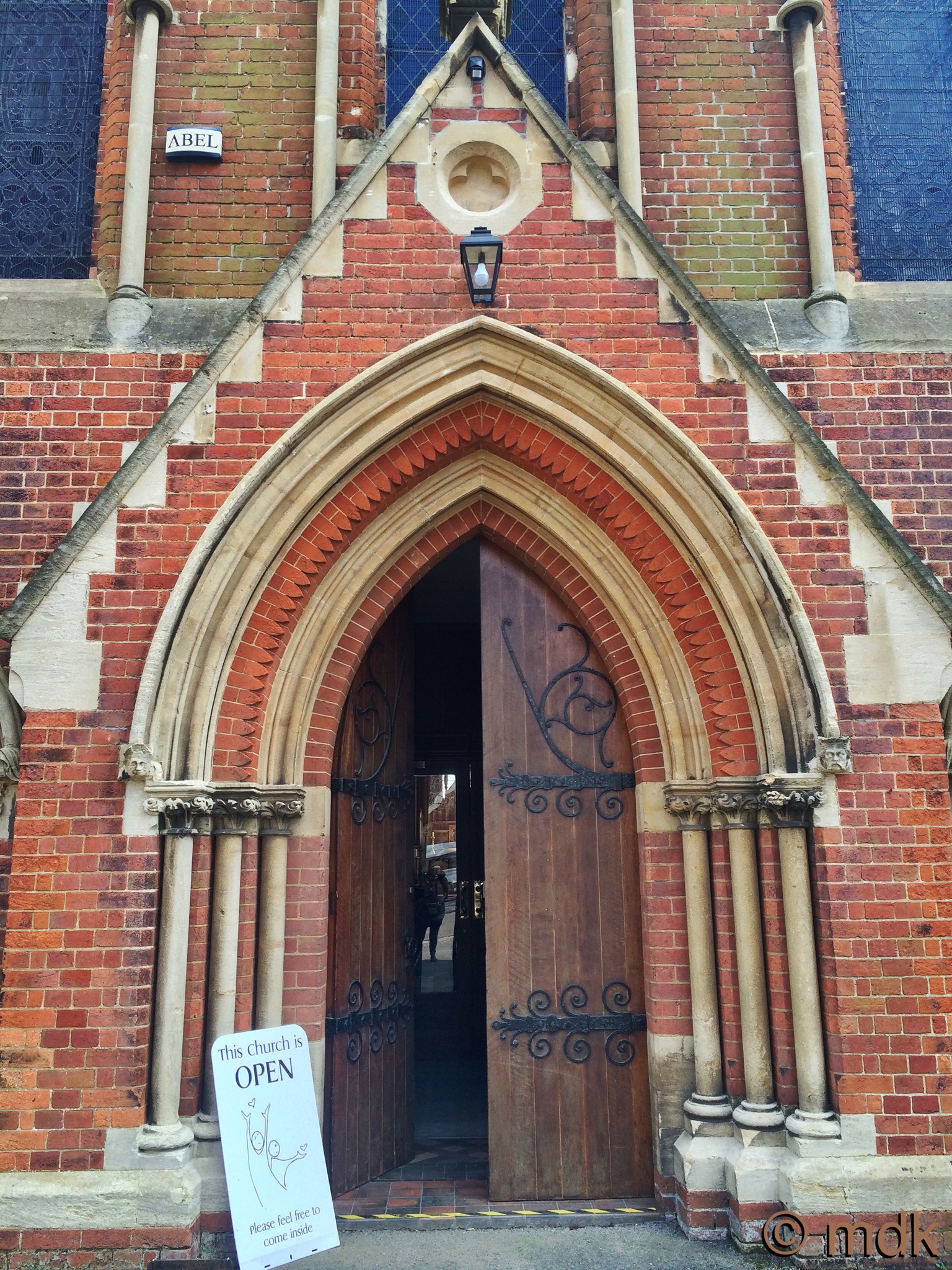 Despite my misgivings I was immediately struck by the warmth of the combination of red brick, polished pews and exposed wooden roof beams. Light streamed through the semi circle of windows behind the altar and gleamed on the rim of the marble font. 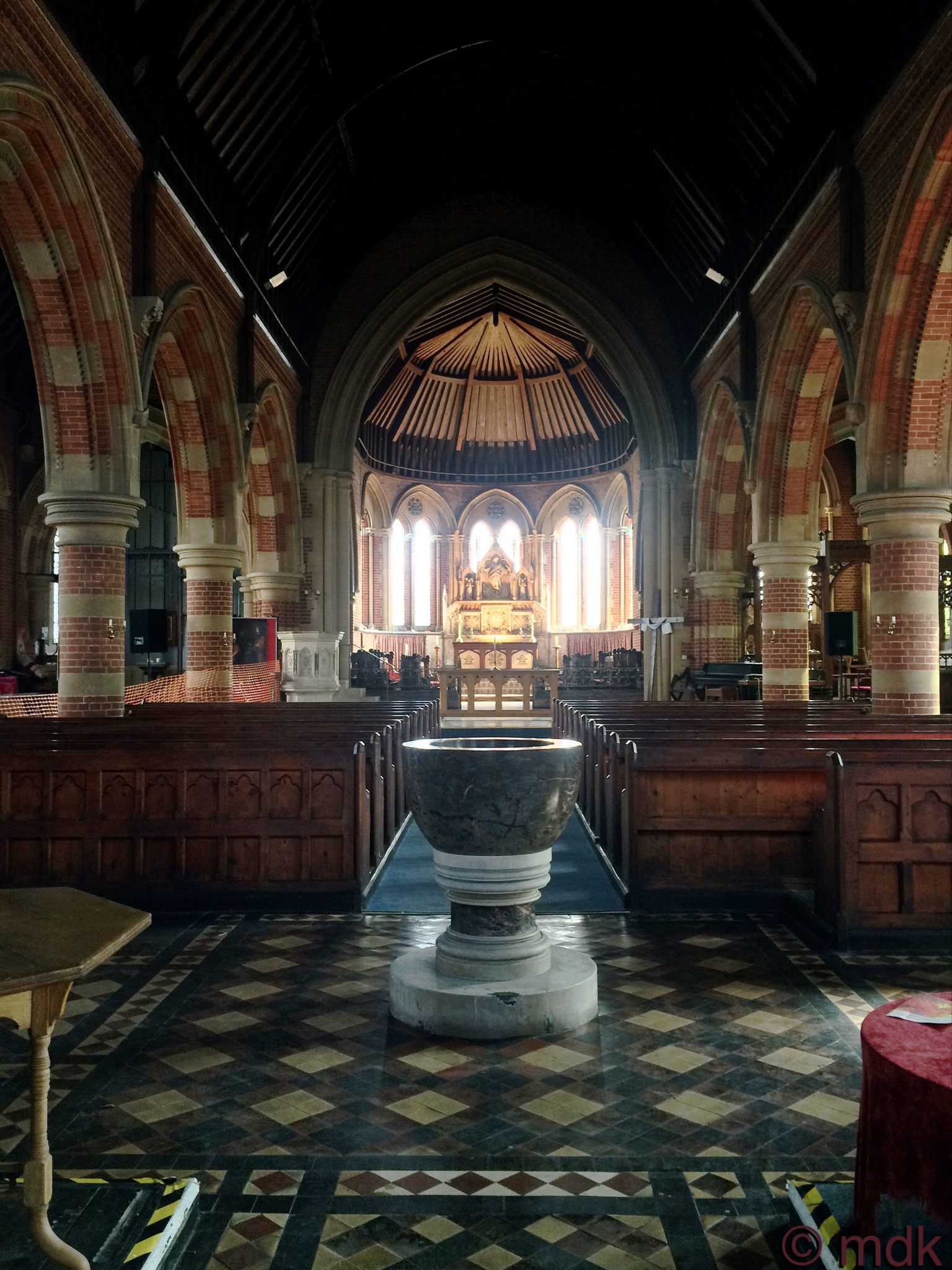 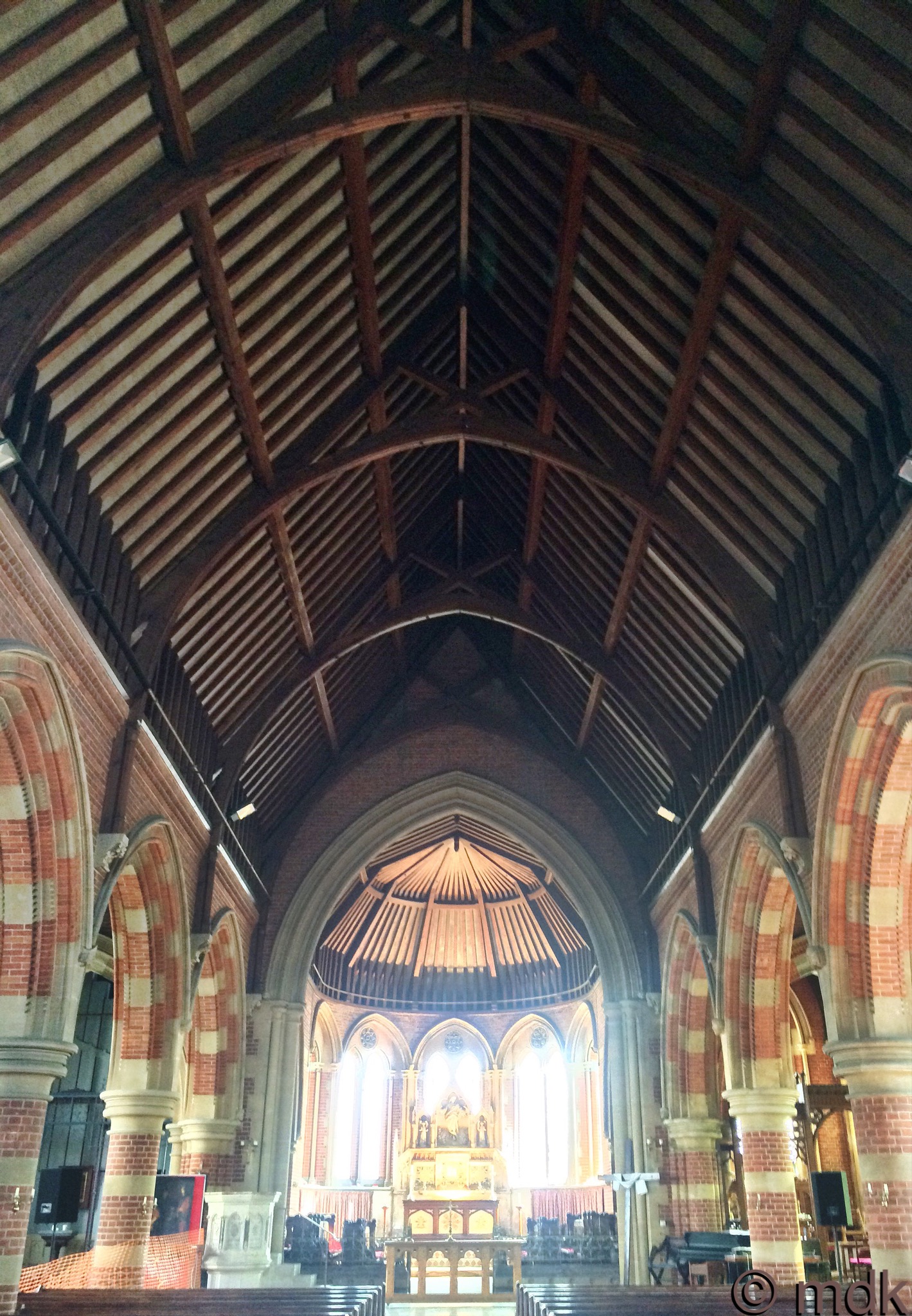 A pile of stone blocks in the corner next to what I assume was the confession box told me there was still work underway. When I went to have a closer look the north aisle was filled with a jumble of building supplies and cordoned off by orange plastic mesh. It looked as if a new floor was about to be laid. 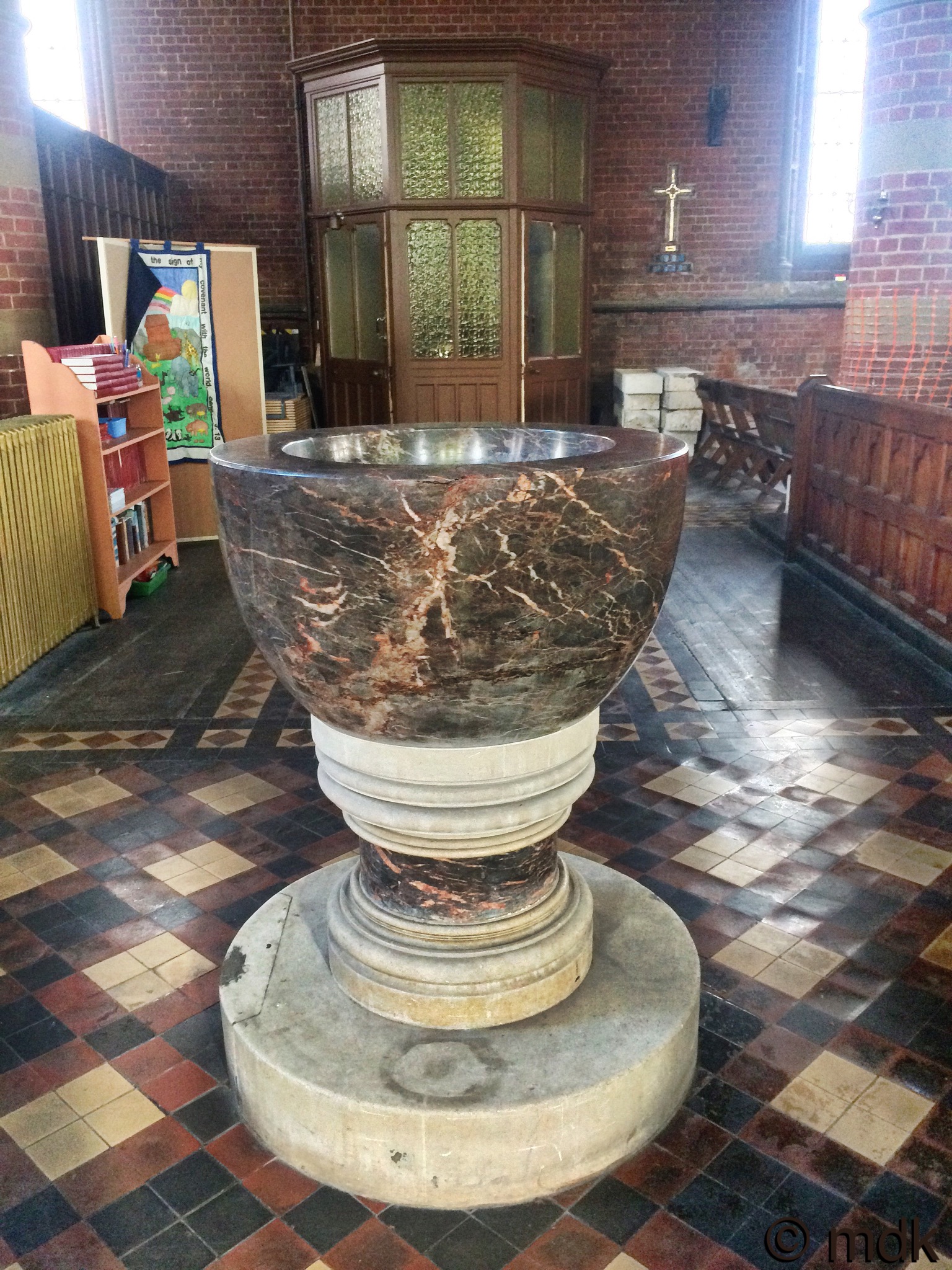 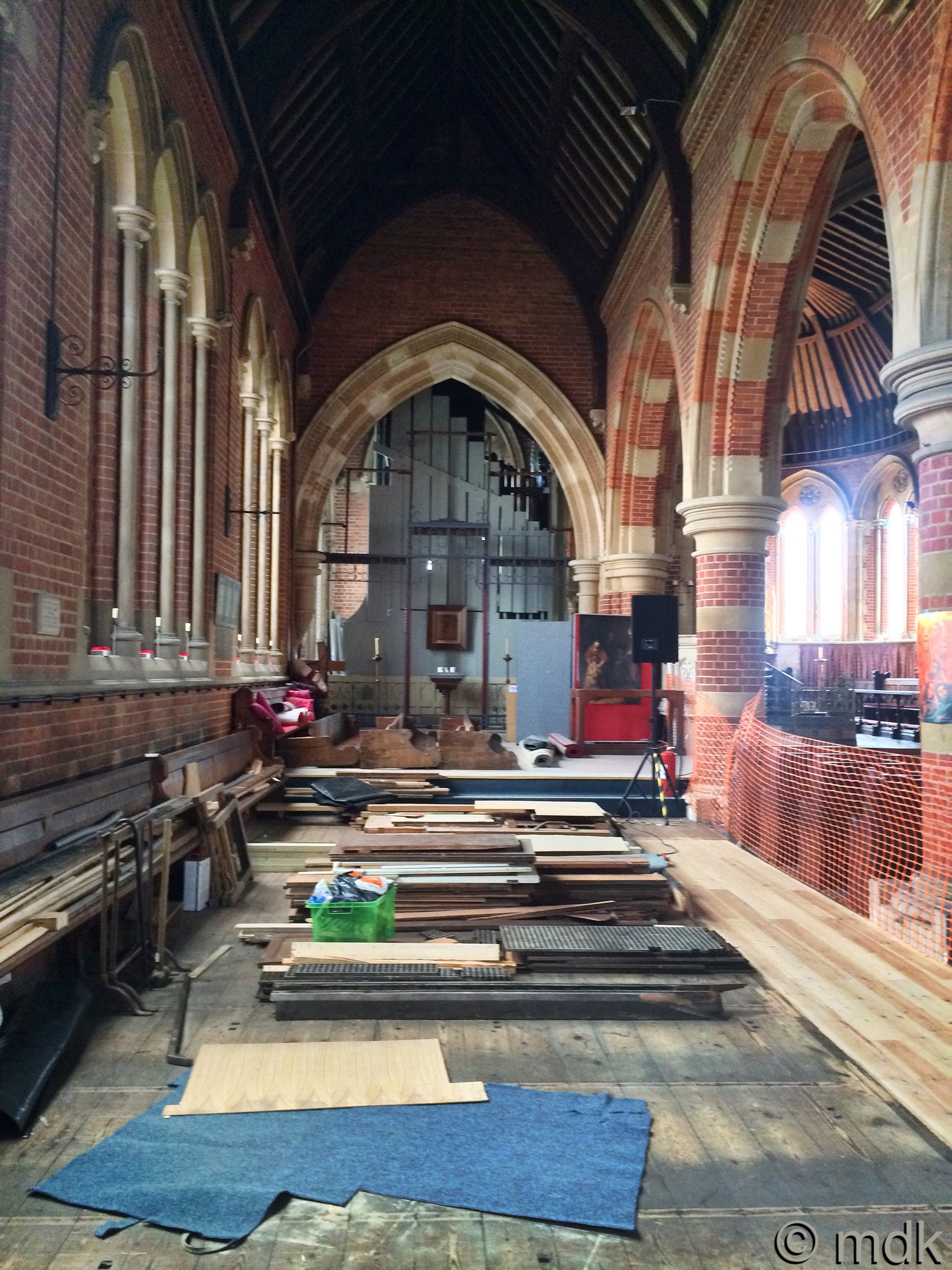 The brown, green and white geometric patterned tiles of the floor led me towards the altar. Once there I stopped for a while to admire the intricate carvings and marvel at the hours of work that must have gone into them. Behind an arch to my left the organ pipes caught my eye. This is a relatively new addition to St Denys Church, having been installed in 1970, but it is a very old organ. 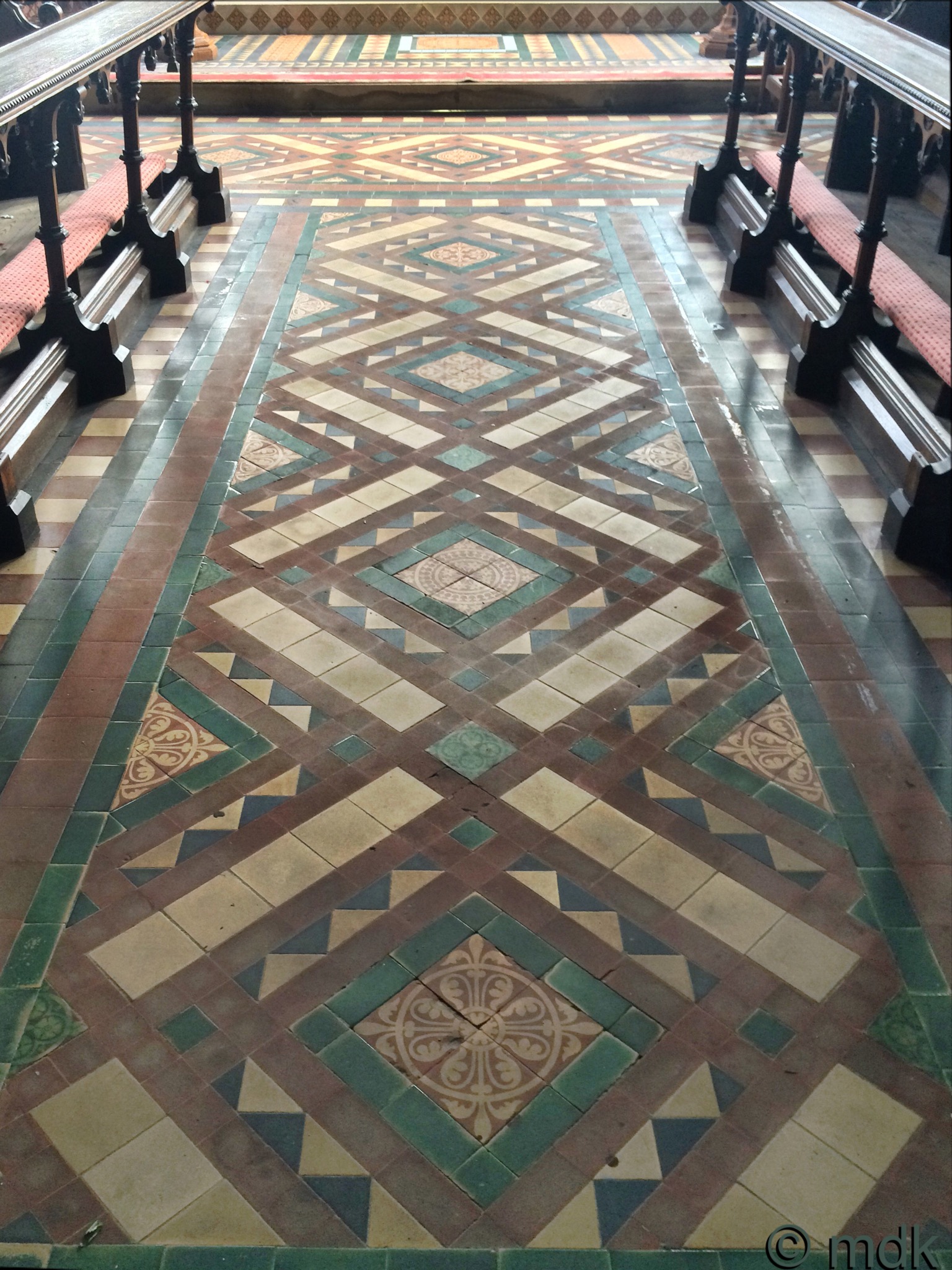 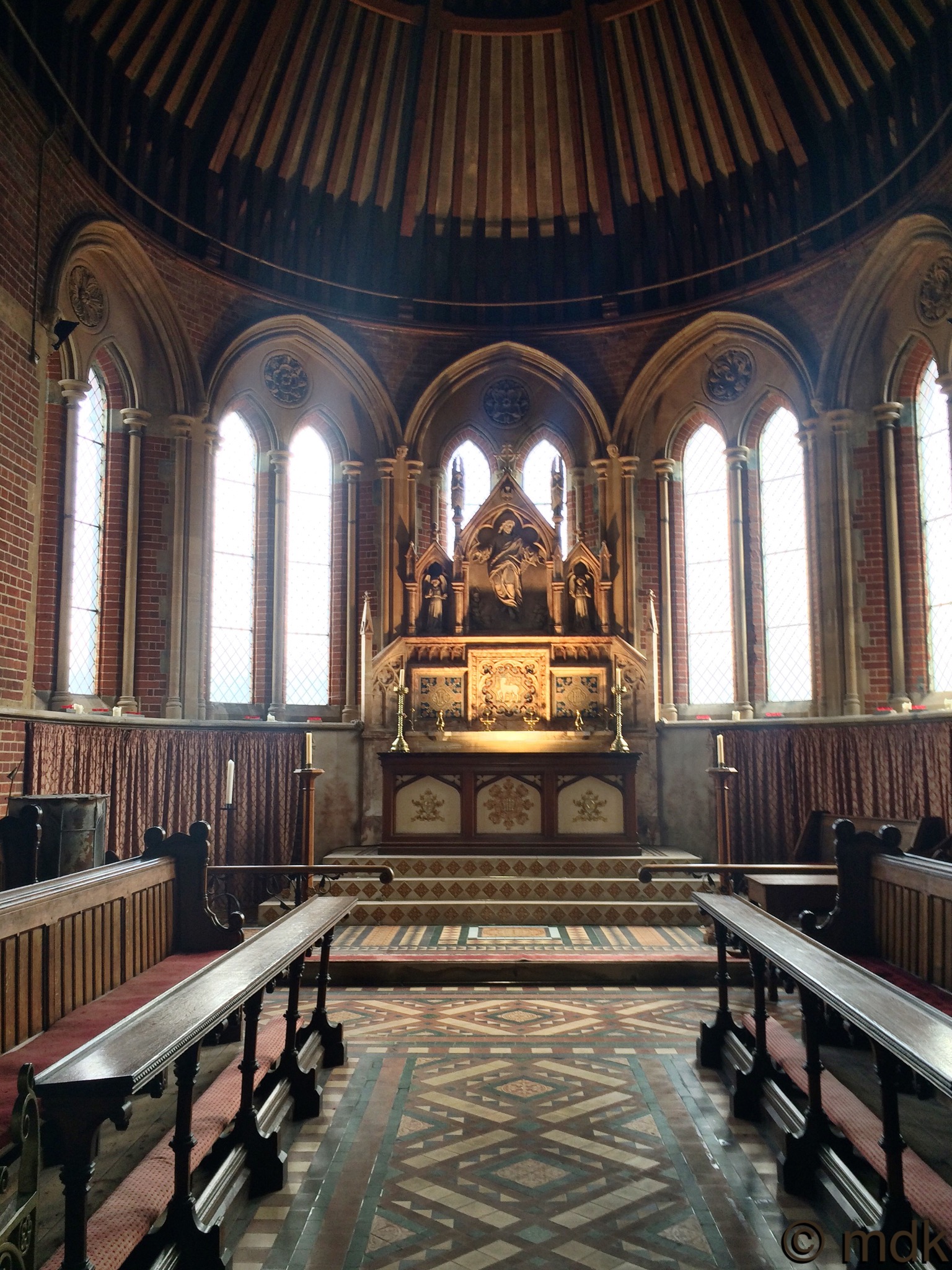 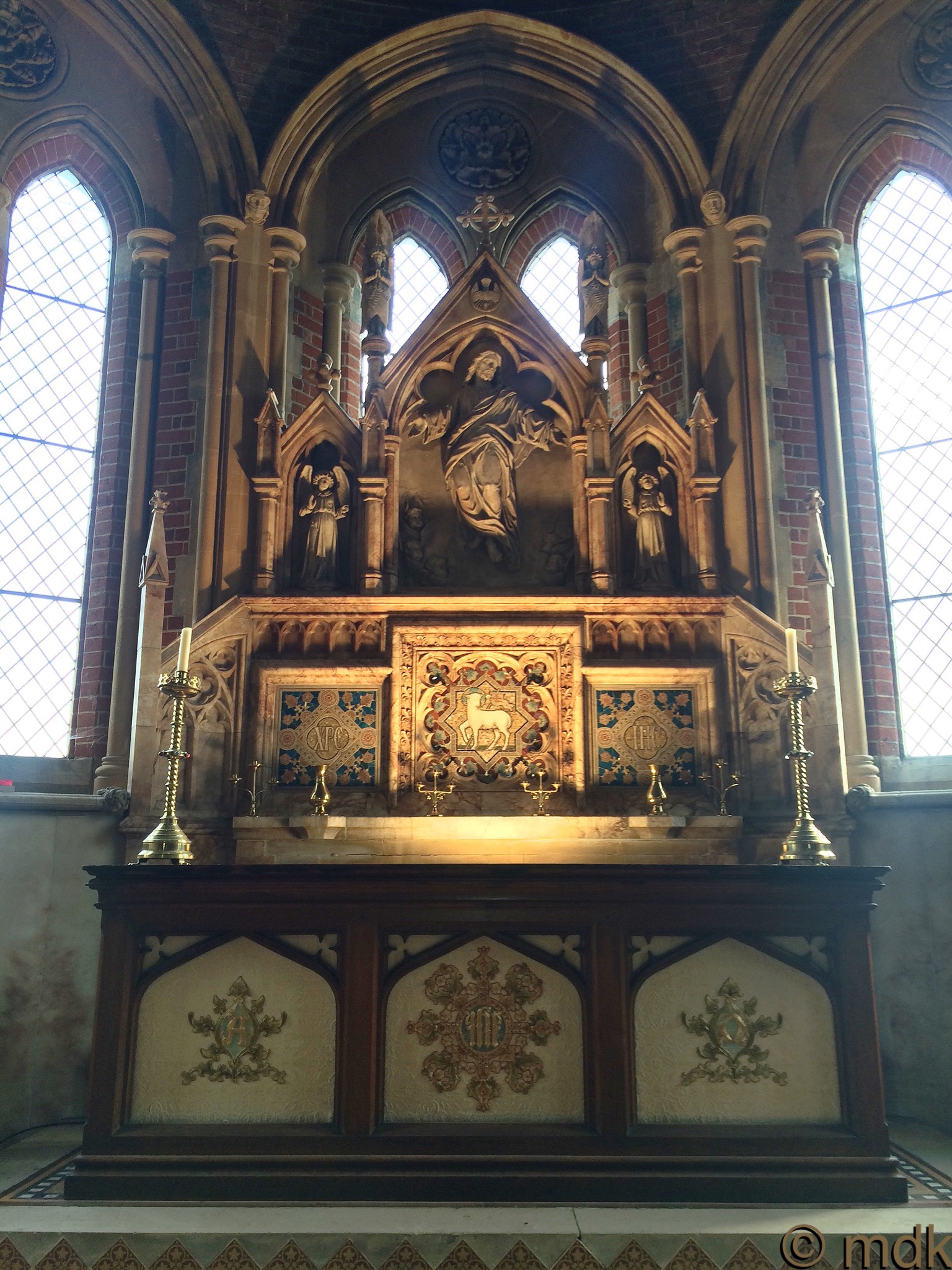 It’s exact origins are uncertain but it’s thought to have been built by Father Smith in 1690, making it one of the oldest in Hampshire. In 1756 it was given to St Maurice’s Church in Winchester by the Marquis of Carnarvon and may have come from Avington Park, the house used in the late seventeenth century by Charles II and Noel Gwyn. Another suggested origin is Cannons, the home of the first Duke of Chandos. There was a similar organ there rumoured to have been played by Handel. In 1957 the organ was moved to St Thomas Church and finally ended up in St Denys. The gothic case was built in 1842. 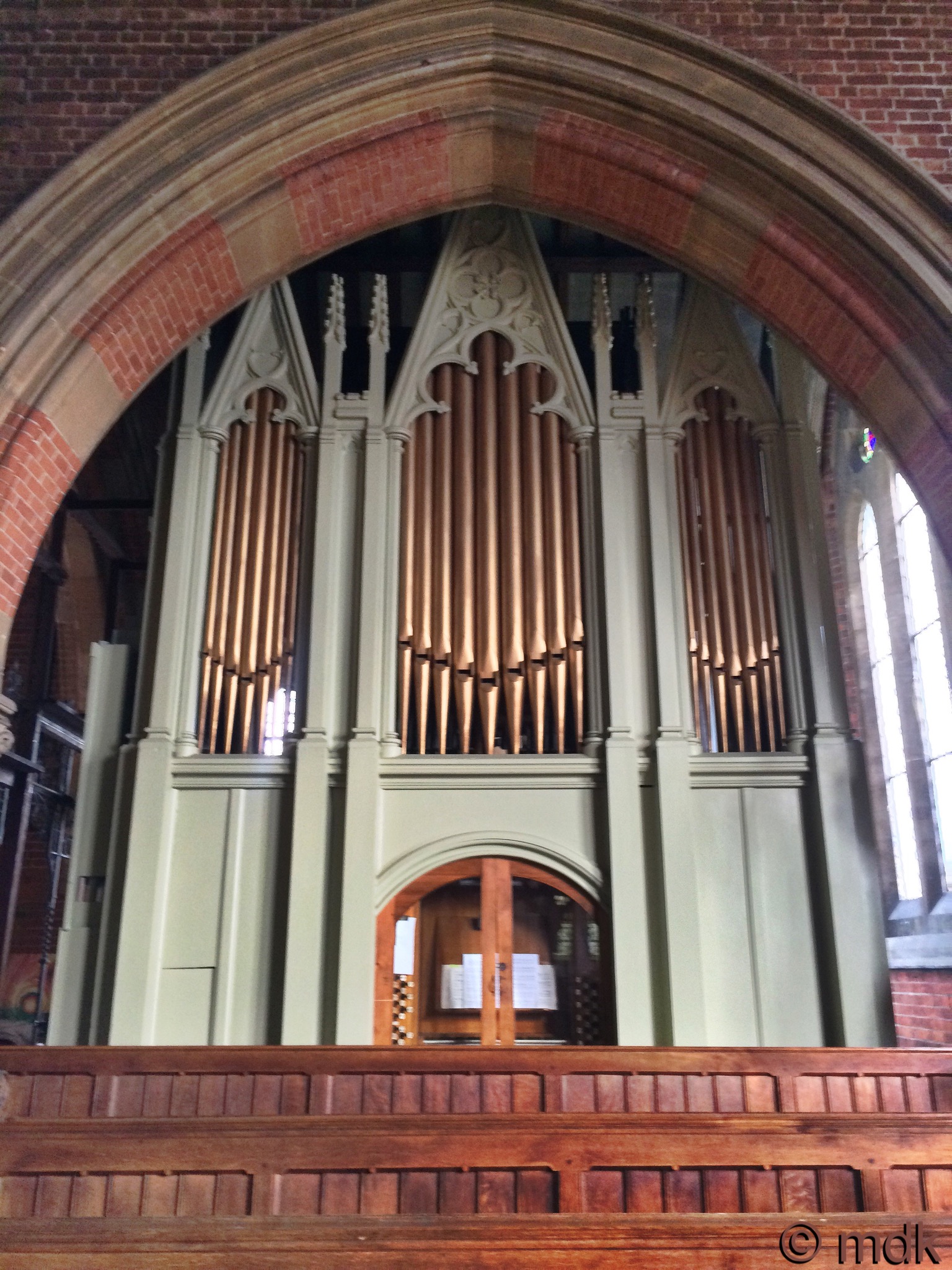 Beside the organ I discovered a carved stone pulpit with marble decorations. On the opposite wall a small wooden door attracted my attention. I do like mysterious doors. When I got closer to this one the mystery was slightly spoiled by a sign that said Fire Exit and Toilets. Still, it was a nice door with some attractive carvings in the stone around it. 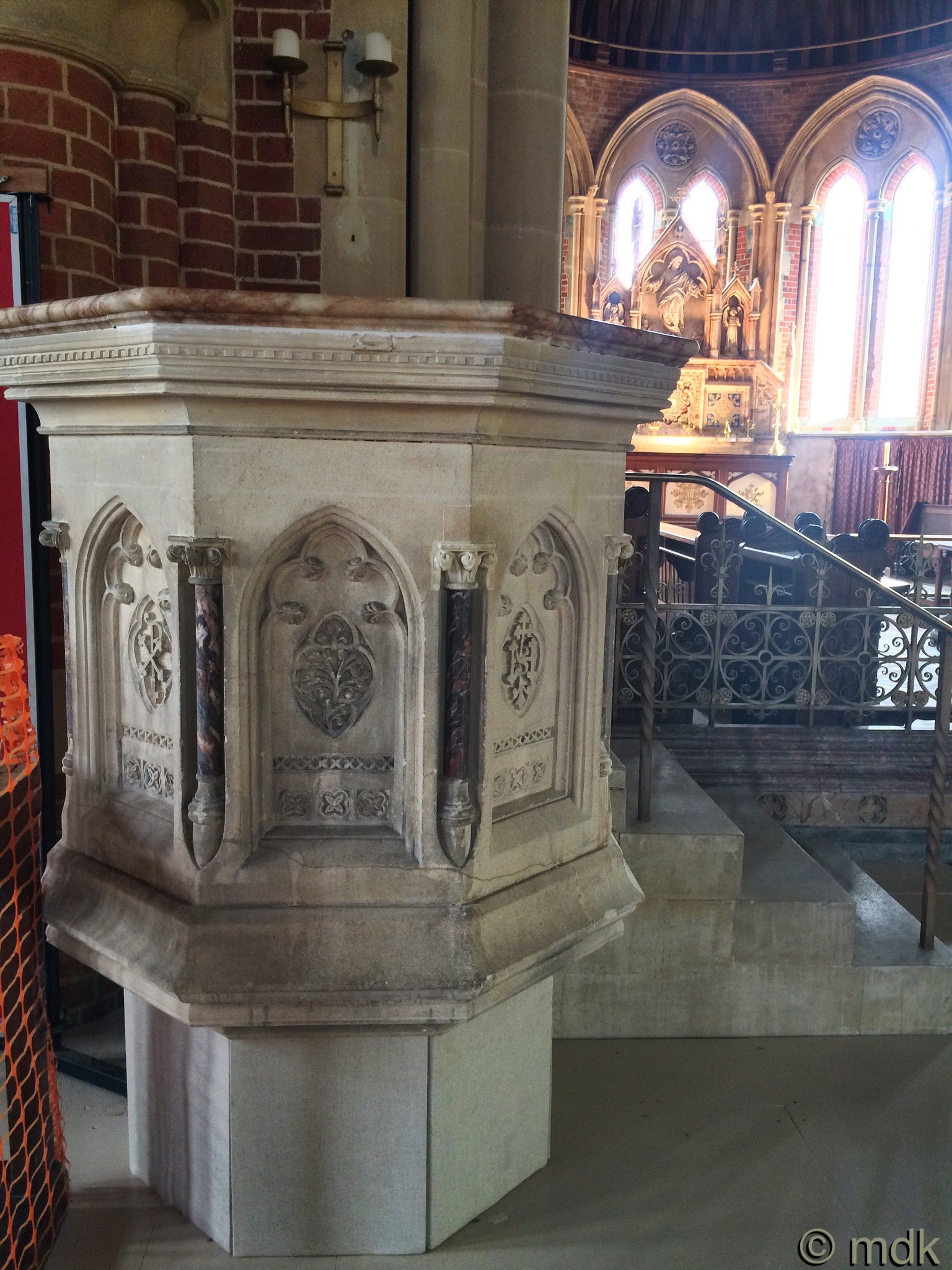 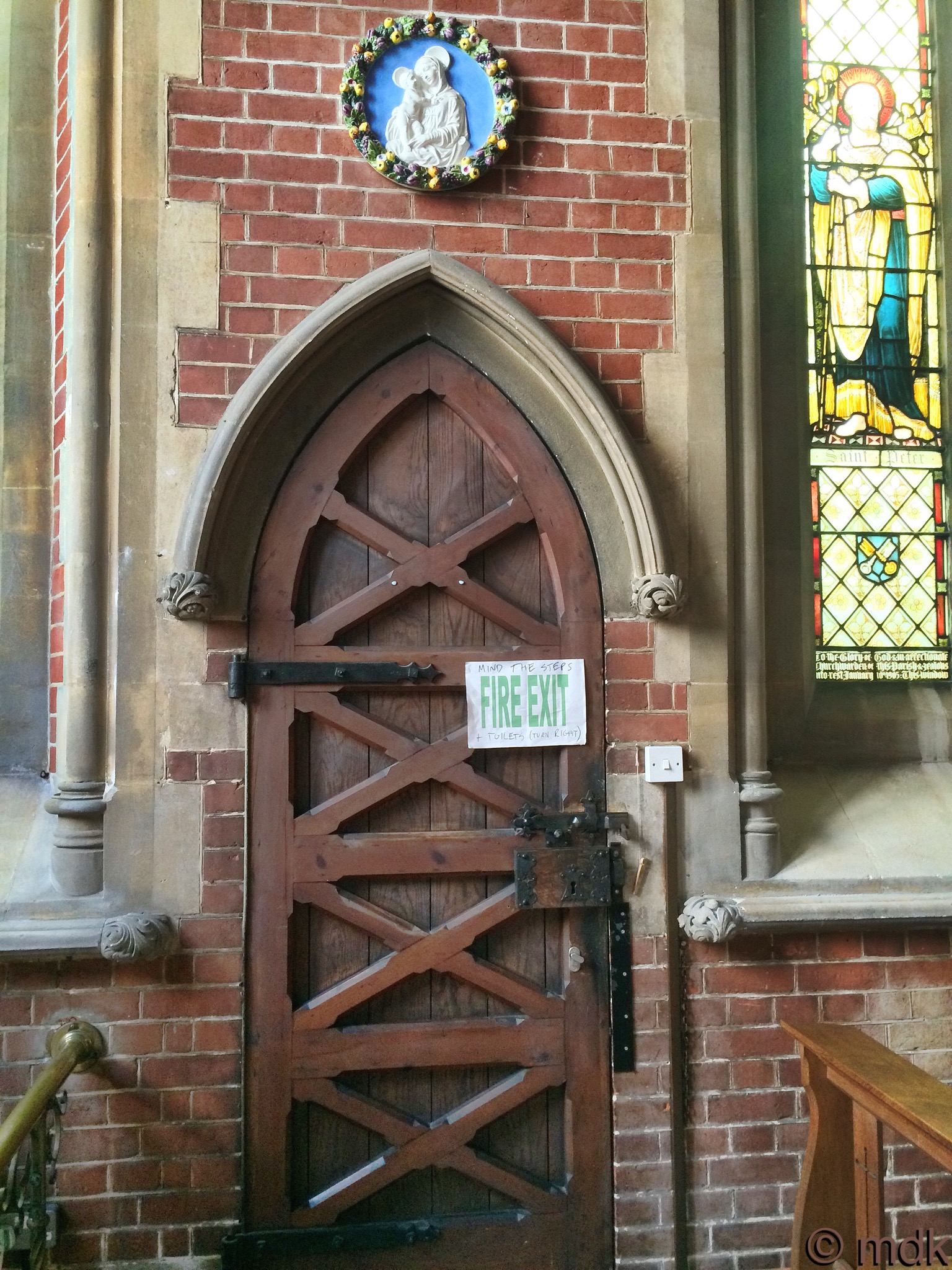 After a pleasant twenty minutes wandering around the church it seemed I’d seen everything of interest. All that was left was to take pictures of the stained glass windows and be on my way. When I turned towards the end of the south aisle though, what I thought was a small painting, low on the wall, intrigued me so I went for a closer look. As I got nearer I could see it wasn’t a painting but a jumble of mismatched tiles. By chance I’d stumbled upon another of the hidden remnants of St Denys Priory. These encaustic floor tiles made by different colours of clay inlaid so the design would remain as the tiles wore down, were discovered in the ruins of the priory. 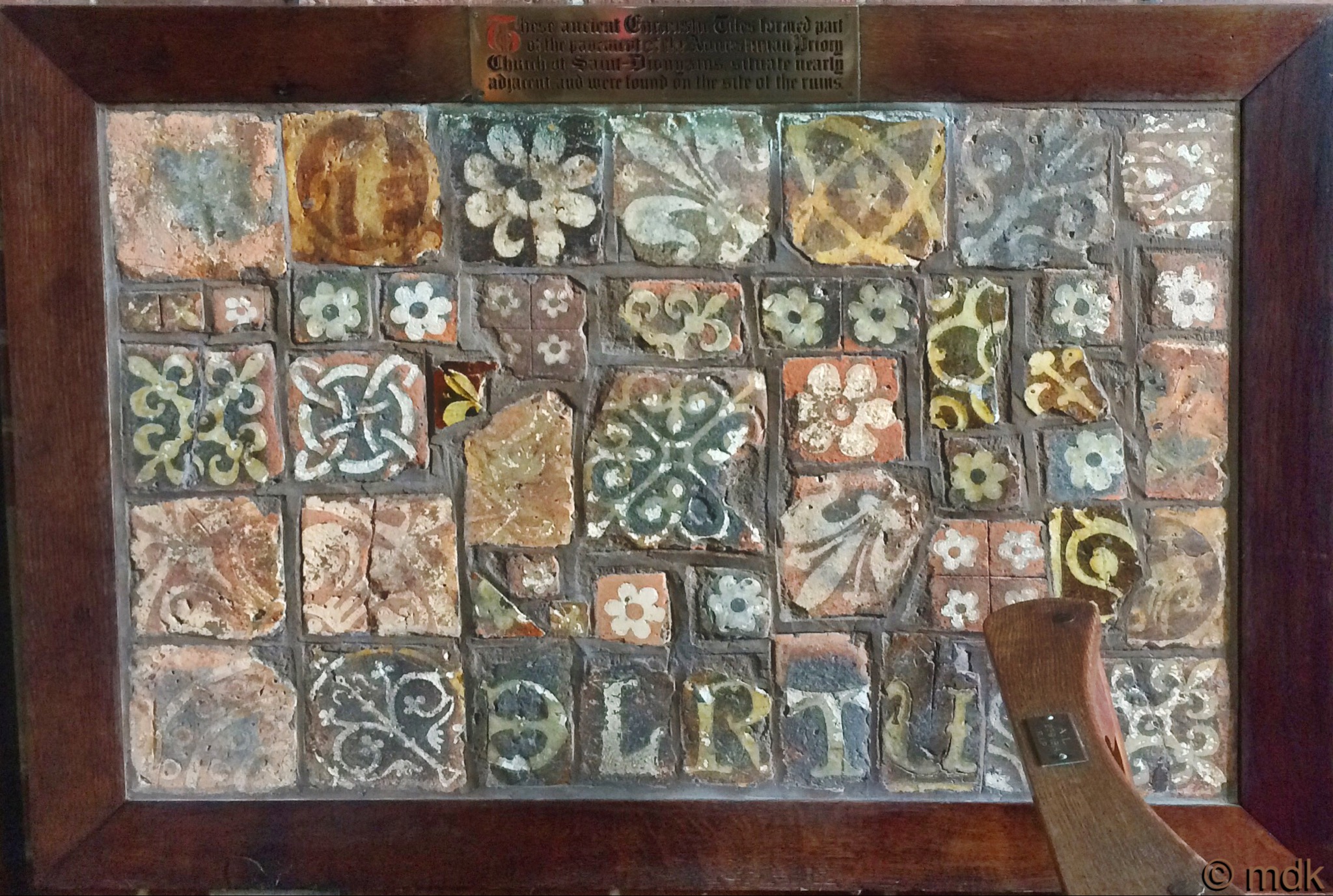 Feeling pretty pleased with myself at discovering a fragment of hidden history, even if it was by accident, I walked back through the carved wooden screen and turned my attention to stained glass. Quite a few of the windows were plain leaded glass and some more colourful ones were inaccessible because of the cordoned off aisle. I took photos of the ones I could and made a mental note to come back again when the work was done to capture the rest. 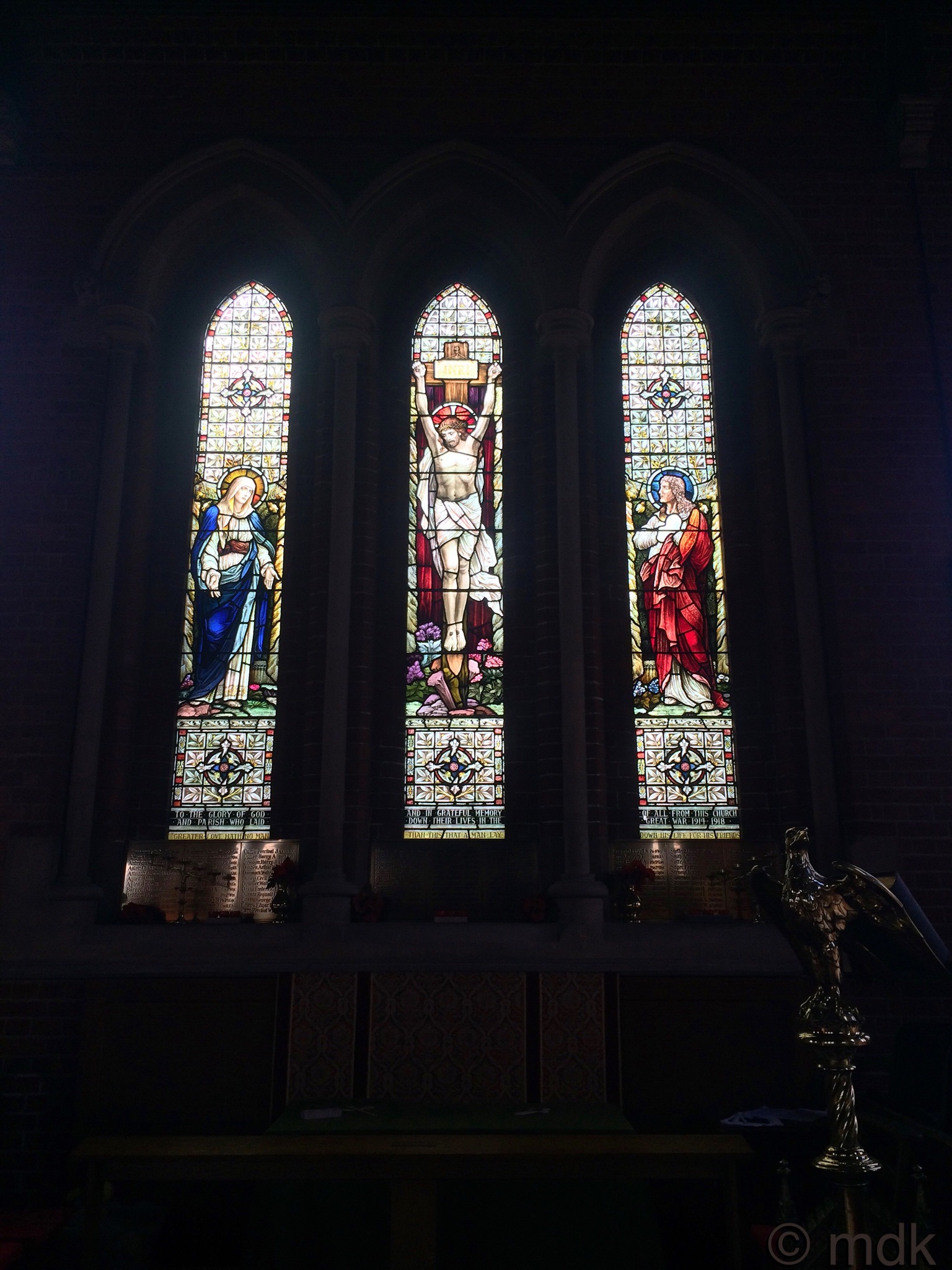 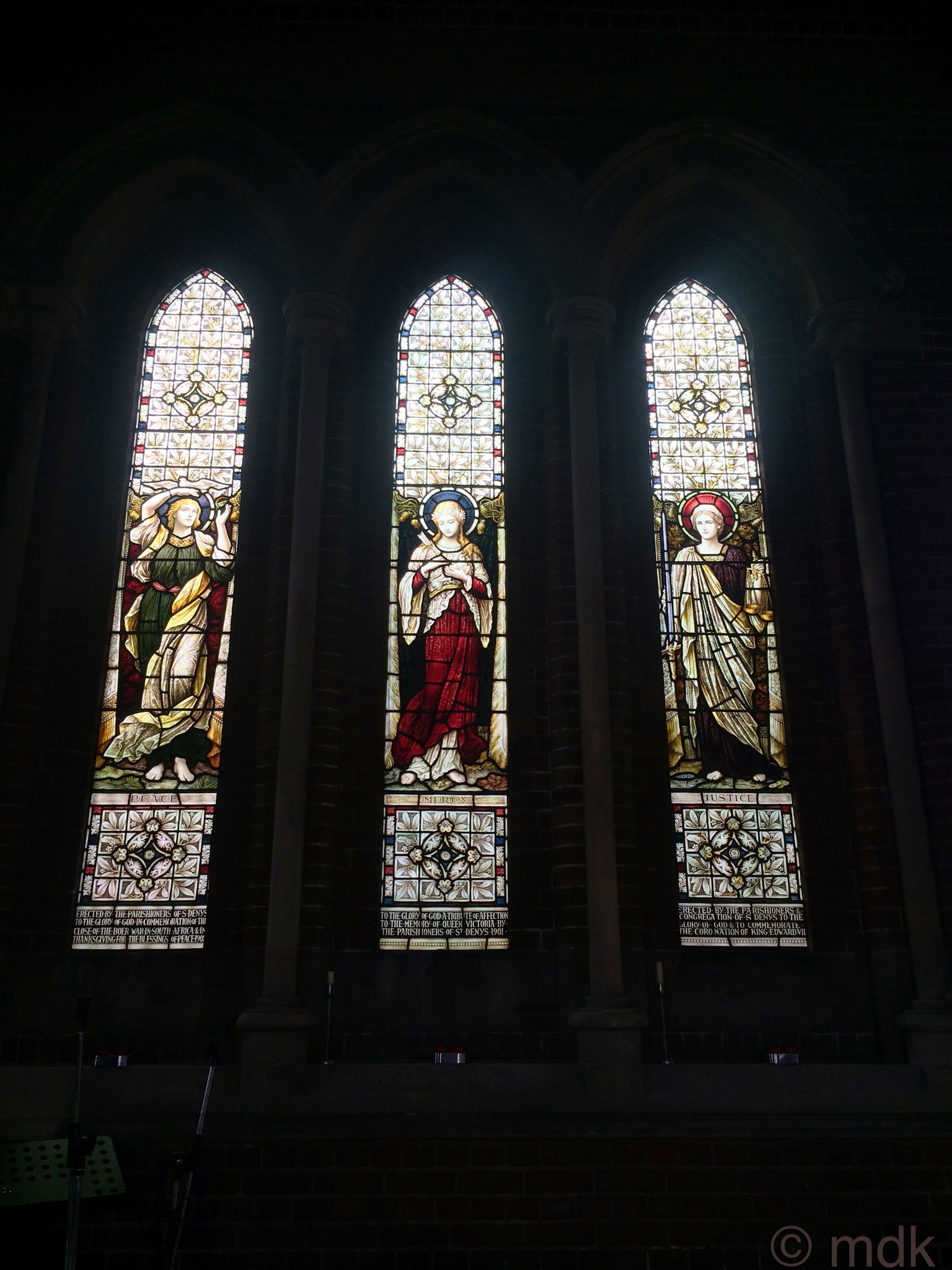 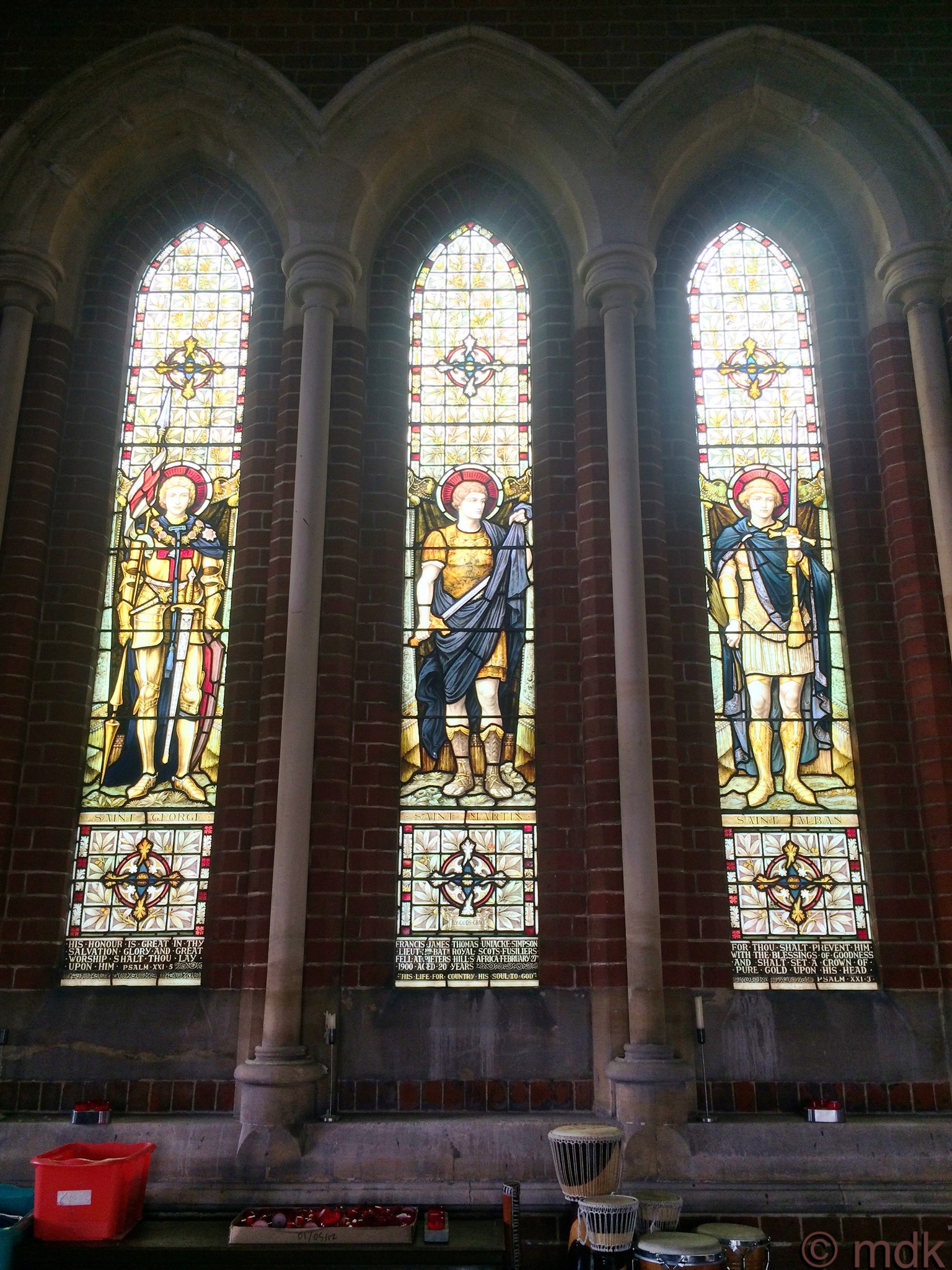 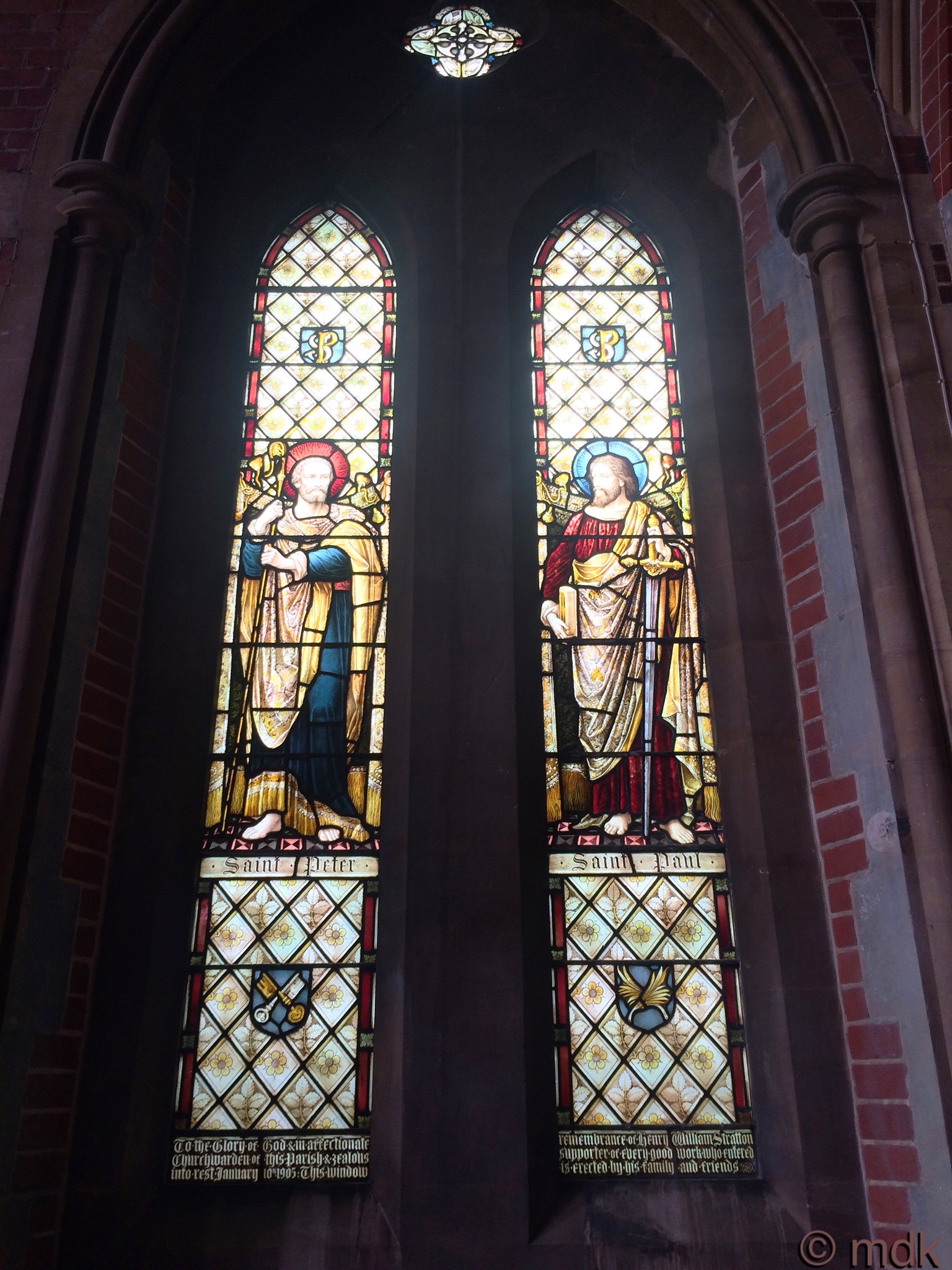 Finally, I turned towards the door and the last of the stained glass. With my photos taken I was about to leave when I caught sight of a stone plaque on the wall to the left of the door tucked away behind the pews. Quite often I take photos of signs and notices because they remind me of things I need to investigate further. I thought the small plaque might be a memorial and I might glean some interesting information from it so I went to have a look. 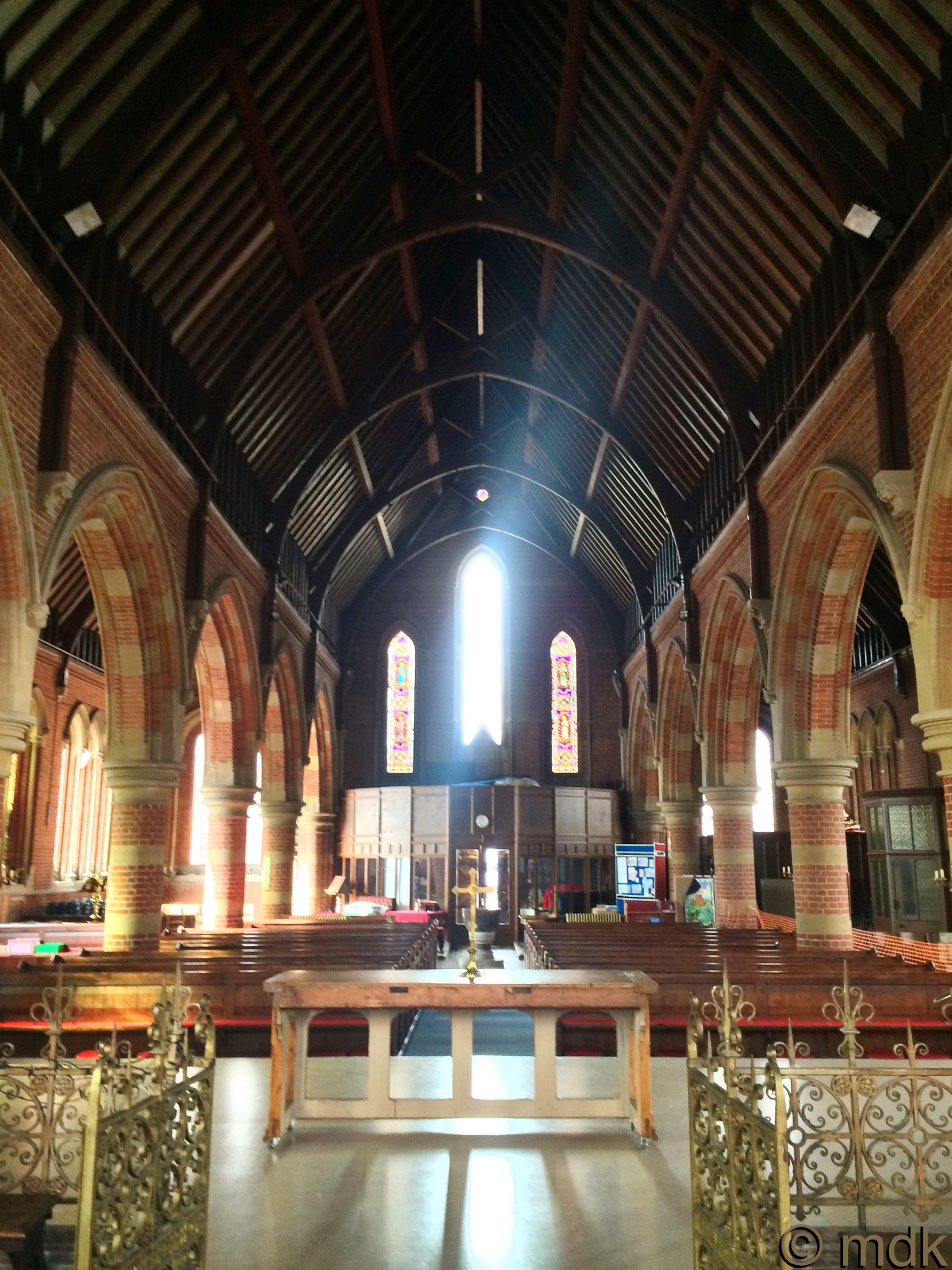 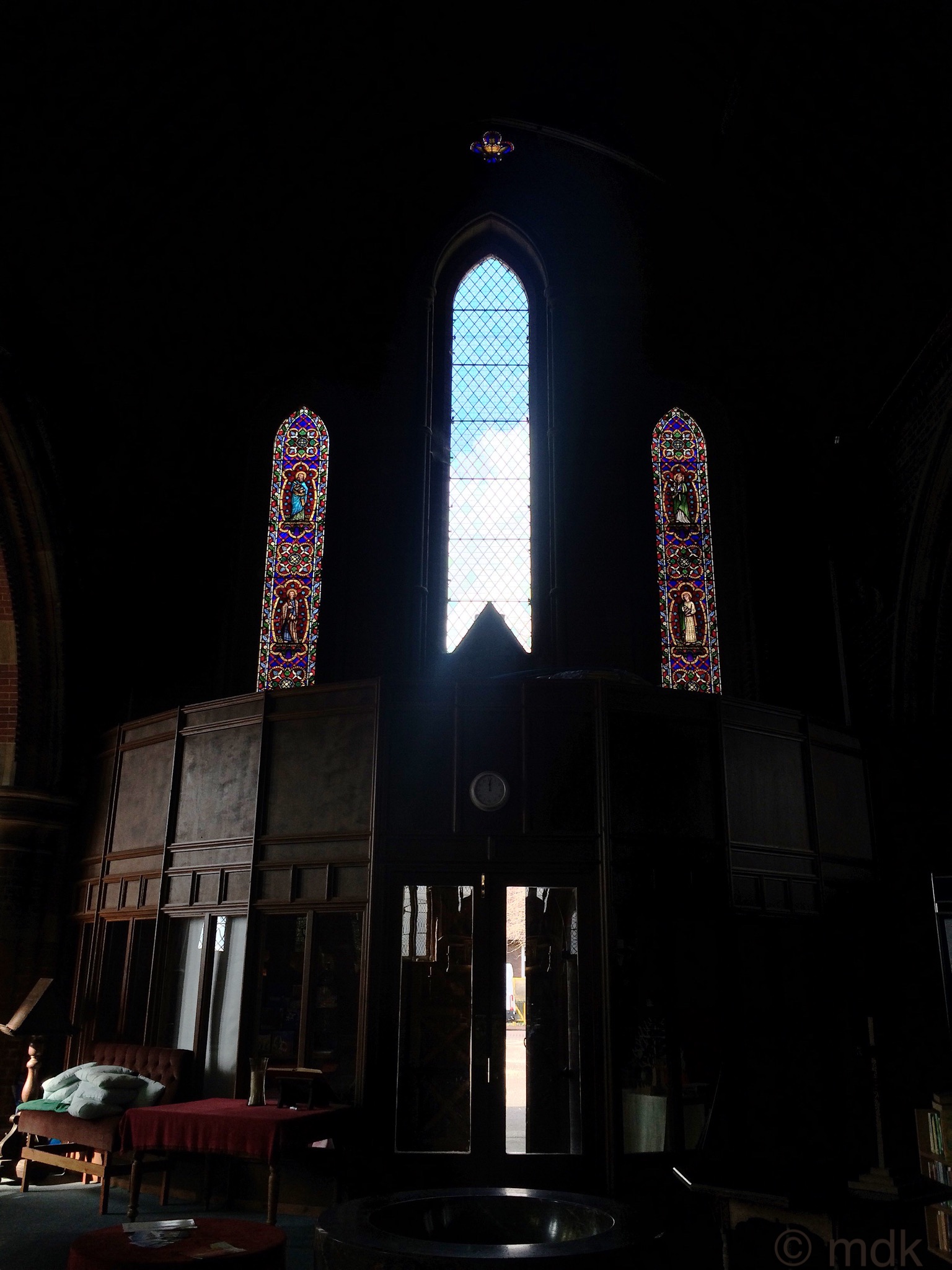 What I found was totally unexpected. Tucked away behind the pews and stacks of plastic chairs was a stone coffin. Obviously it was very old. The sign told me this was another remnant of the priory. Later research revealed it dated from the twelfth or thirteenth century and was large enough to accommodate someone of six foot eight. Given that the average height in those days was around five foot five it made me wonder if this could be the grave of the legendary giant Ascupart of local folklore? 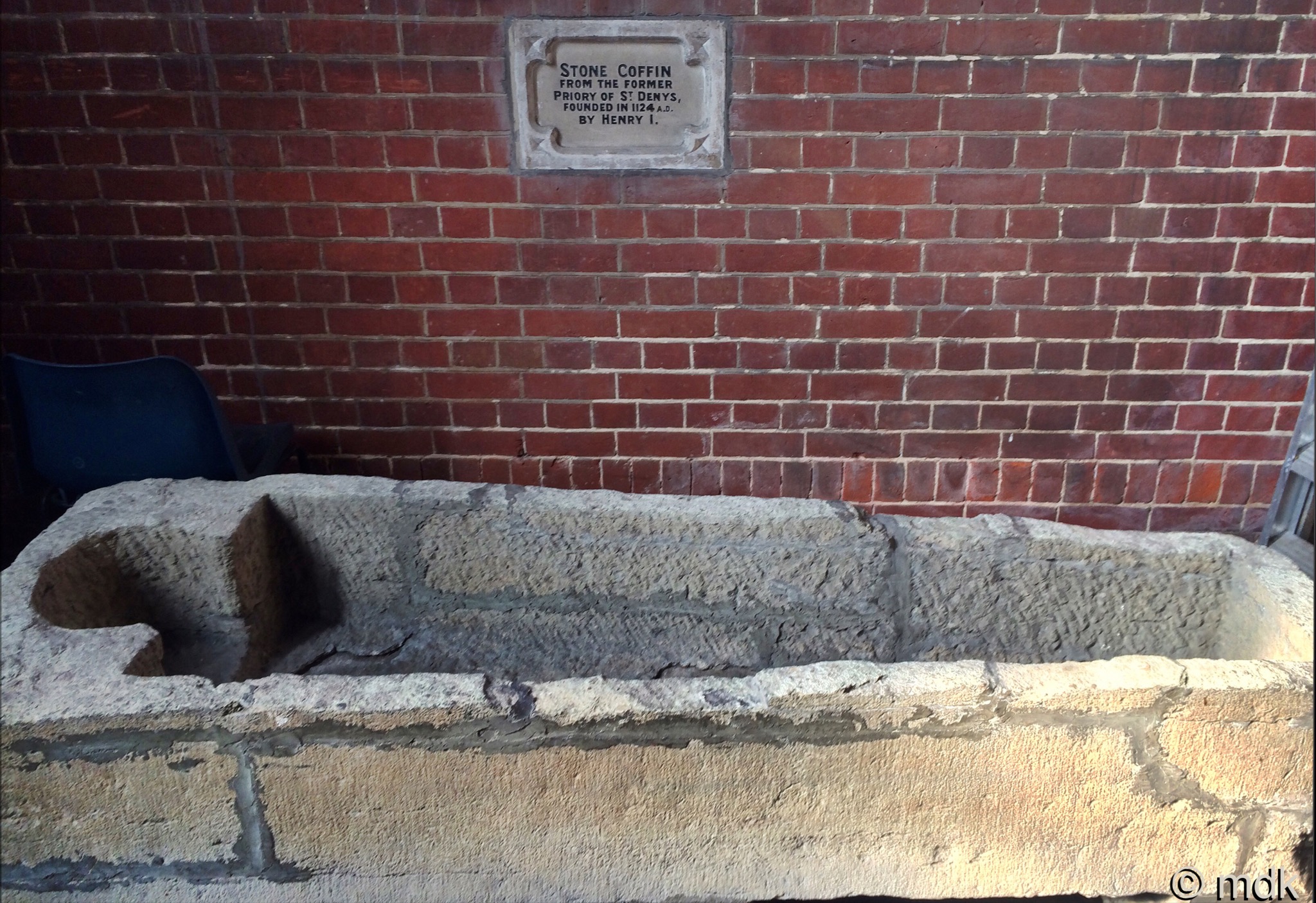 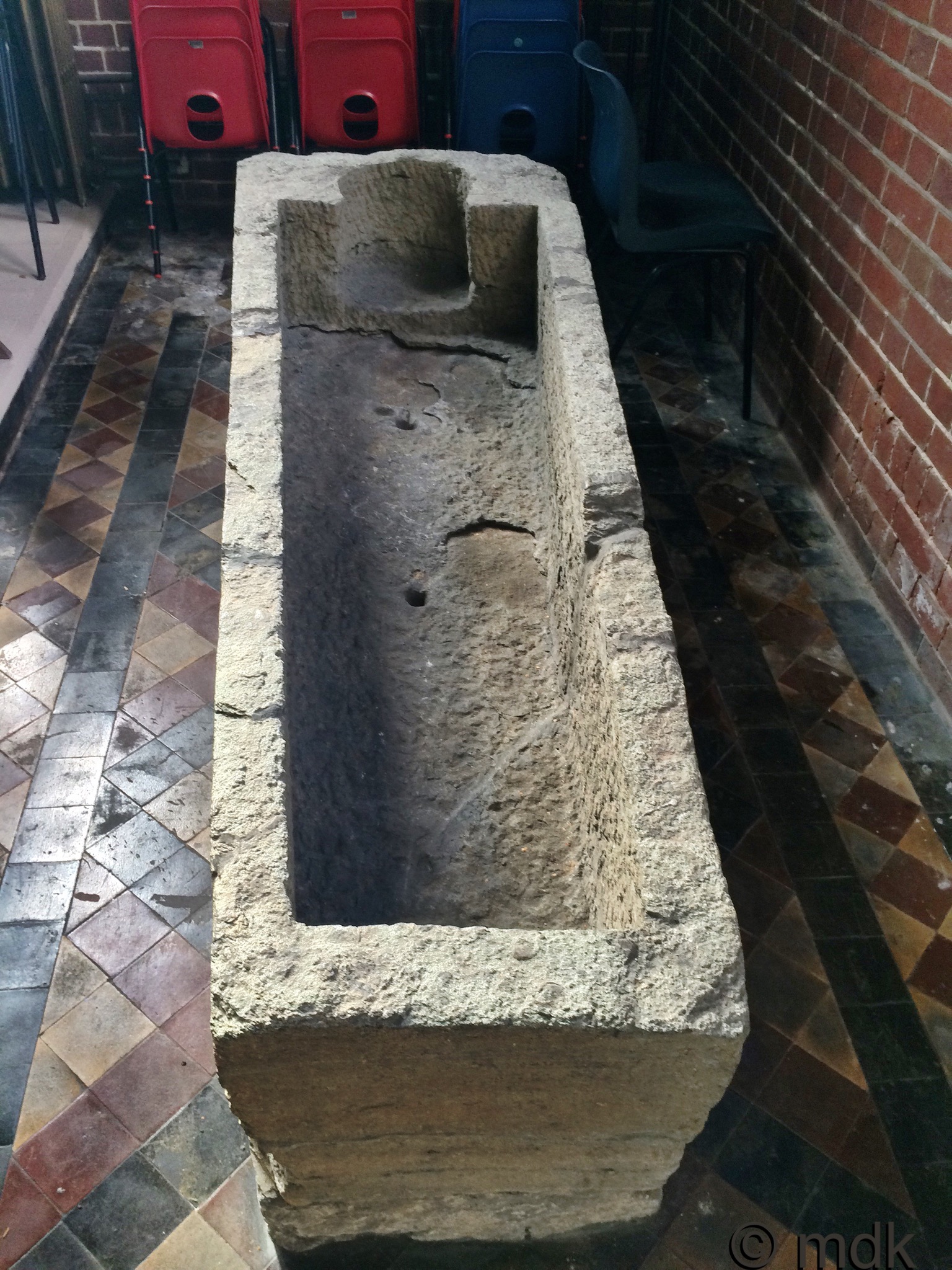 27 thoughts on “The lost priory of St Denys”