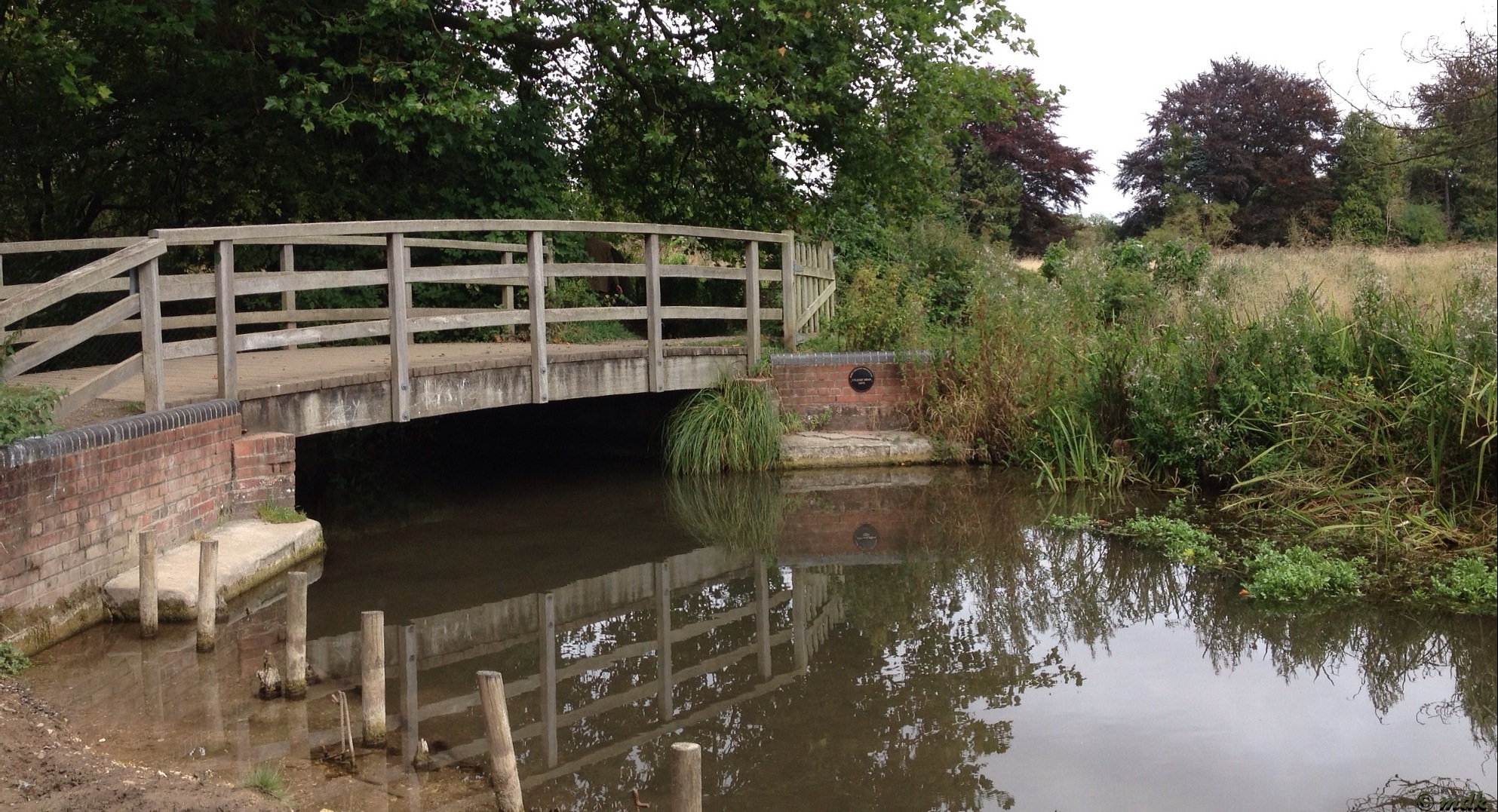 September 2013 and Sirona and I were feeling refreshed after our snacks at College Mead Lock. We crossed the little bridge. A short distance along, the track of the Navigation comes out onto a path beside the railway. Ahead the trail continues, it’s narrow, overgrown and crumbling so it was time to leave the Navigation again briefly.

Next to the high brick wall of the railway viaduct Sirona spotted a fat little beetle wandering across the path. Despite a thorough Googling, I’m not sure what kind of beetle he is but he was about half an inch long and black with the most beautiful iridescent green sheen to him. When I looked at the photo later I noticed the poor thing was missing an antenna. Maybe he’d been in a fight. 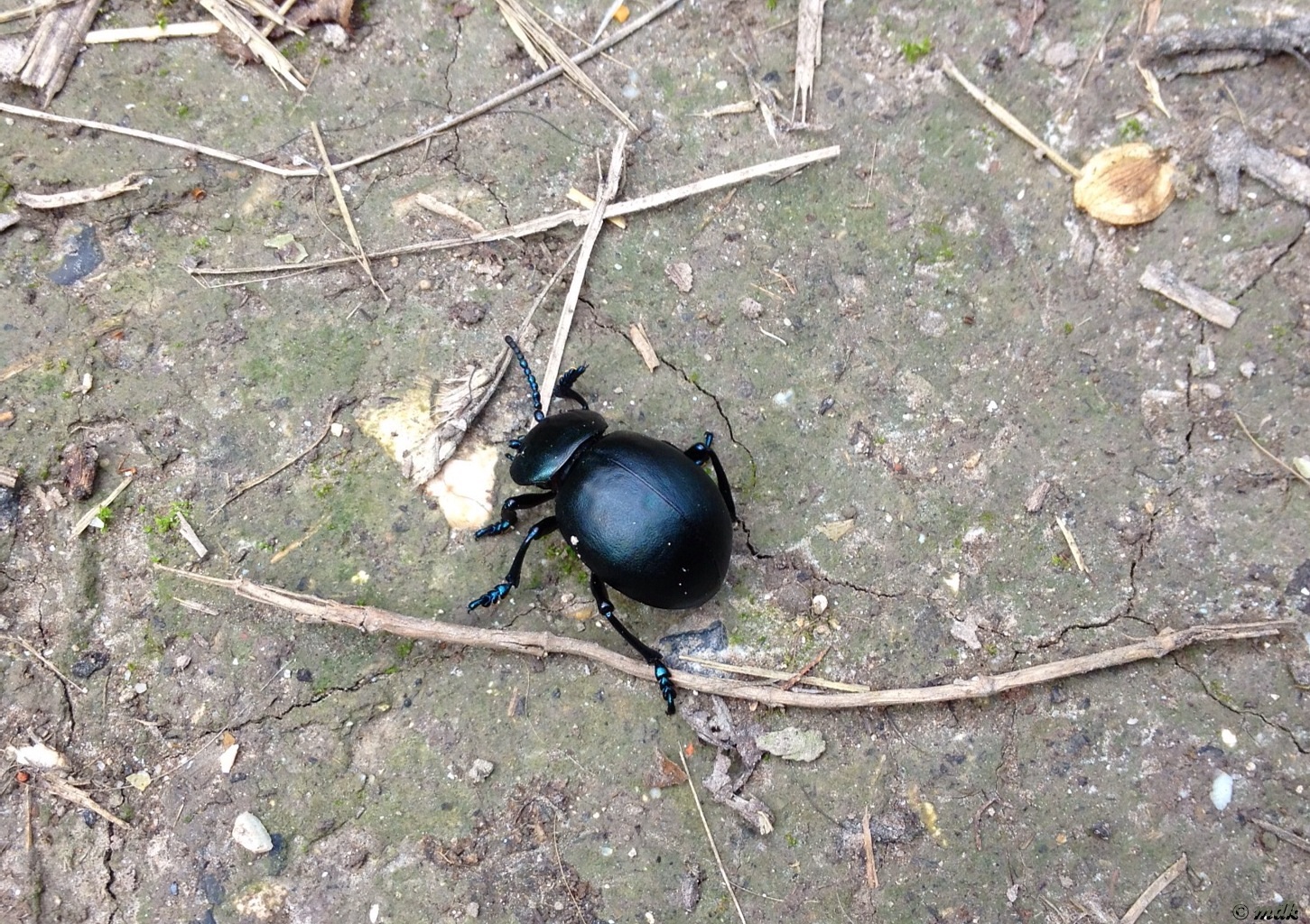 There were bulrushes growing along the riverbank amongst the willowherb and spotted touch me nots along with a lovely view across the Twyford fields. Through an arch at the end of the path there’s a footpath to Shawford Down. It’s only a short walk but there are war memorials to look at so maybe I will walk that way one of these days. 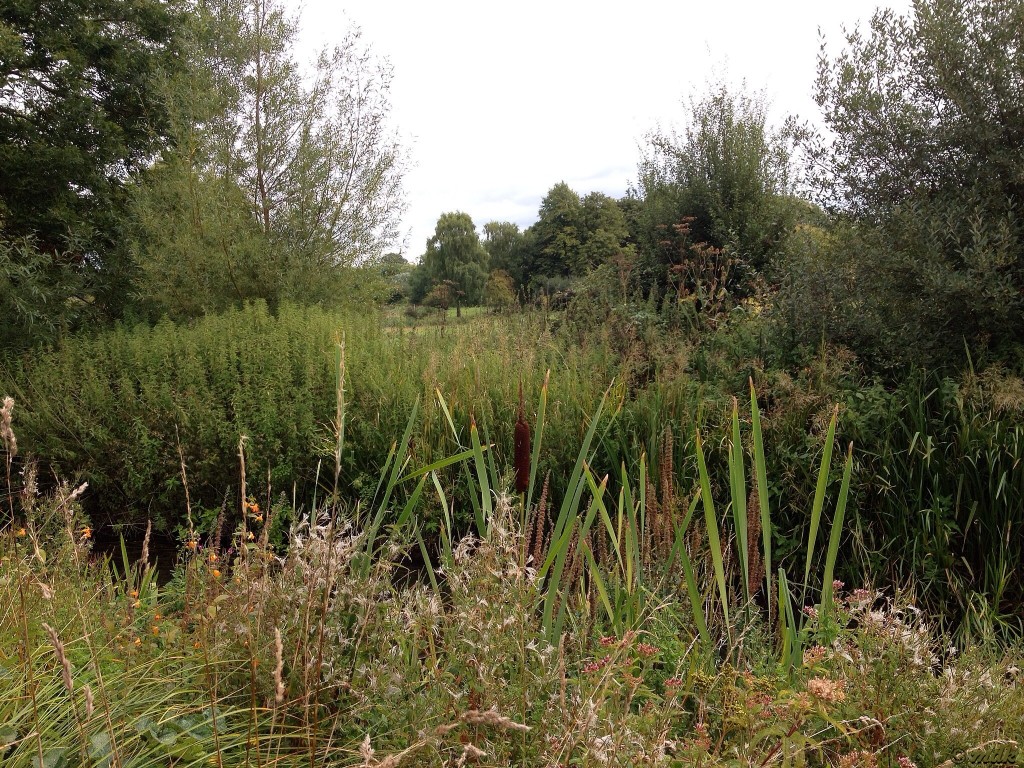 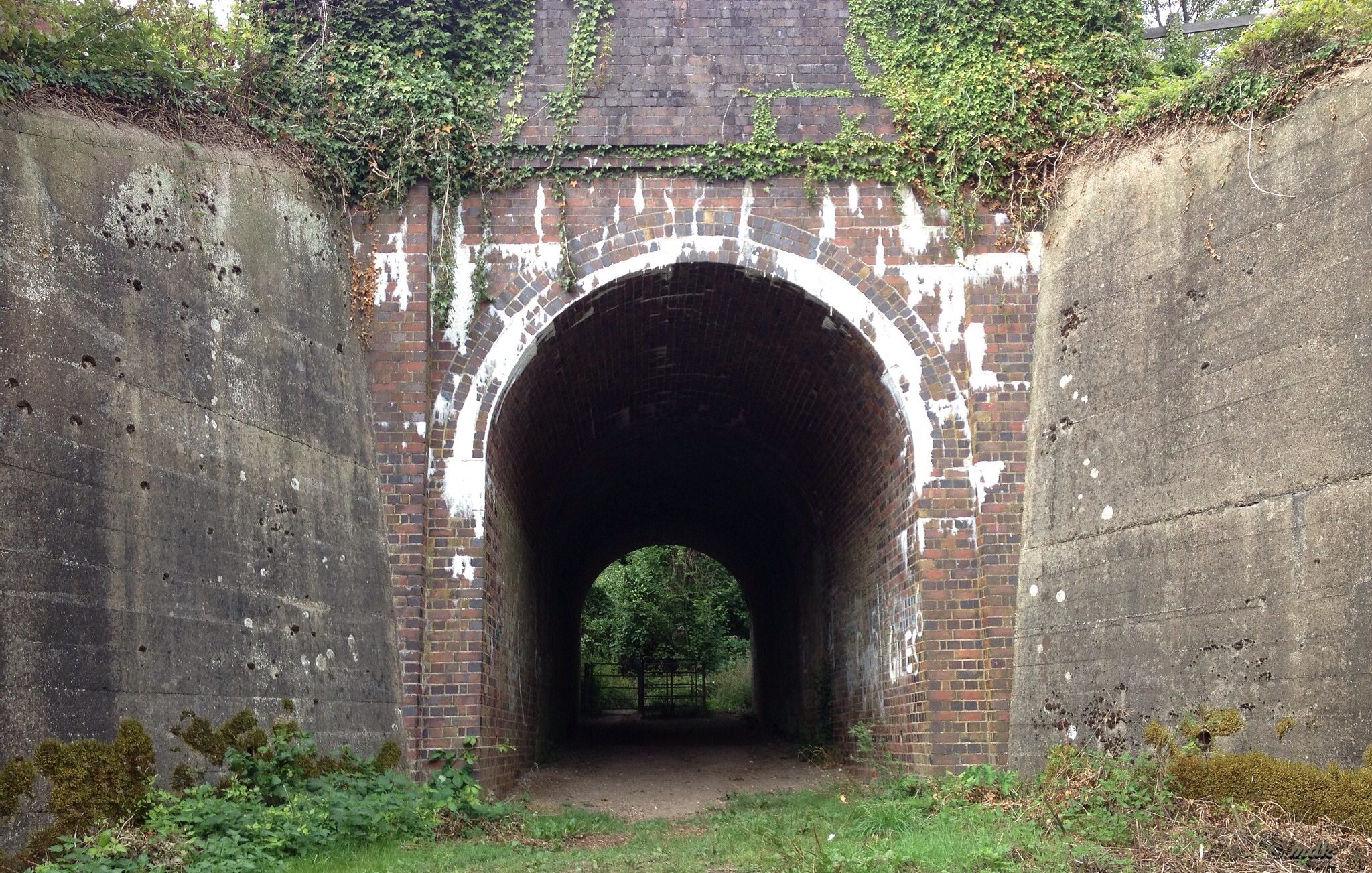 We carried on along the path until we came to the row of cottages at the water’s edge. We were back on the Navigation. It was nice to be beside the river again with rustic willow withies retaining the bank and clear green water burbling past. Goldenrod and teasels lined the bank and a yew tree that had been cut back hard, probably so the cottagers could enjoy the river view. 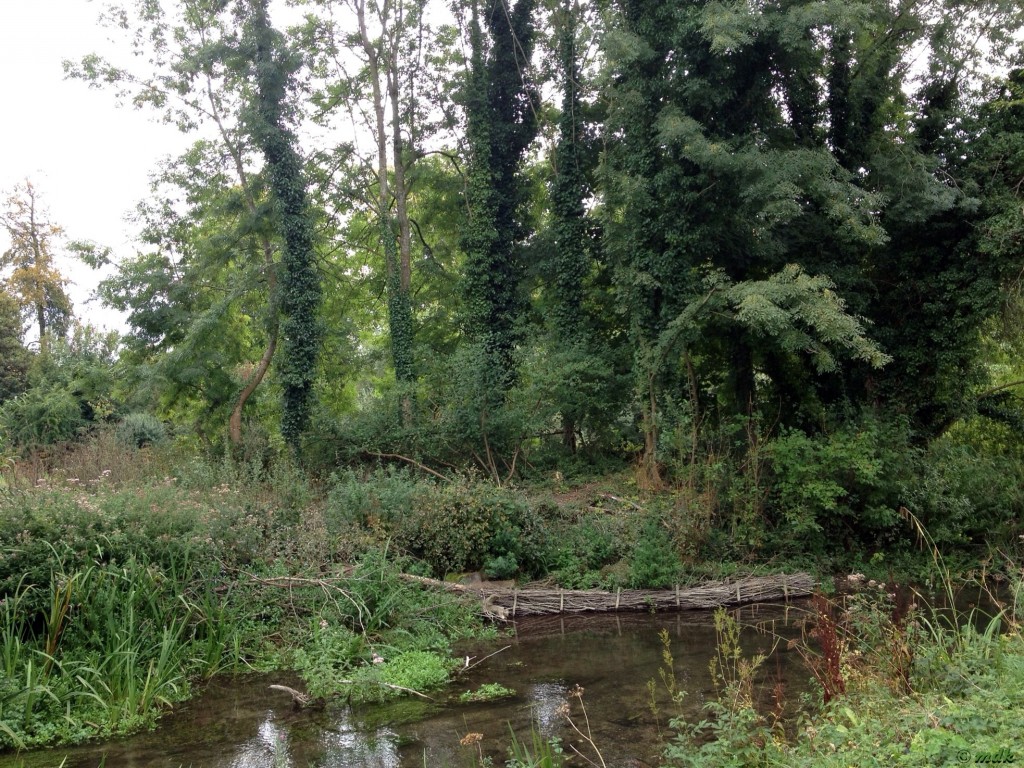 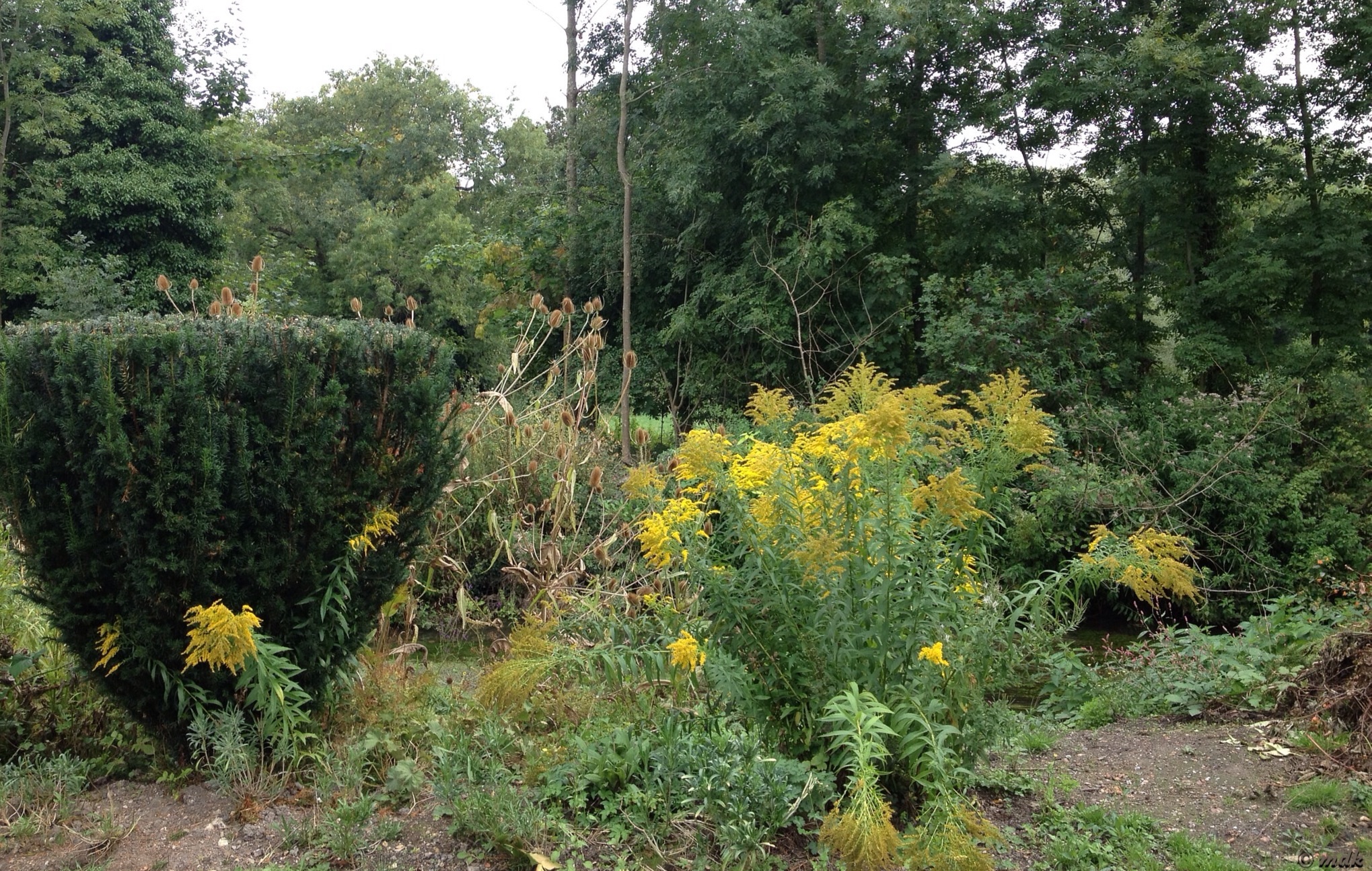 The pretty cottage gardens were even more interesting than the river, one had a wonderful display of flowers. One cottage was especially interesting, I remembered it well from my previous visit. Peeking from under a green tarpaulin is a fabulous old gypsy caravan. Half hidden by an apple tree it’s decorated with wonderful paintings of fruit, flowers a horse and sun. “Imagine having that in your garden,” I said. 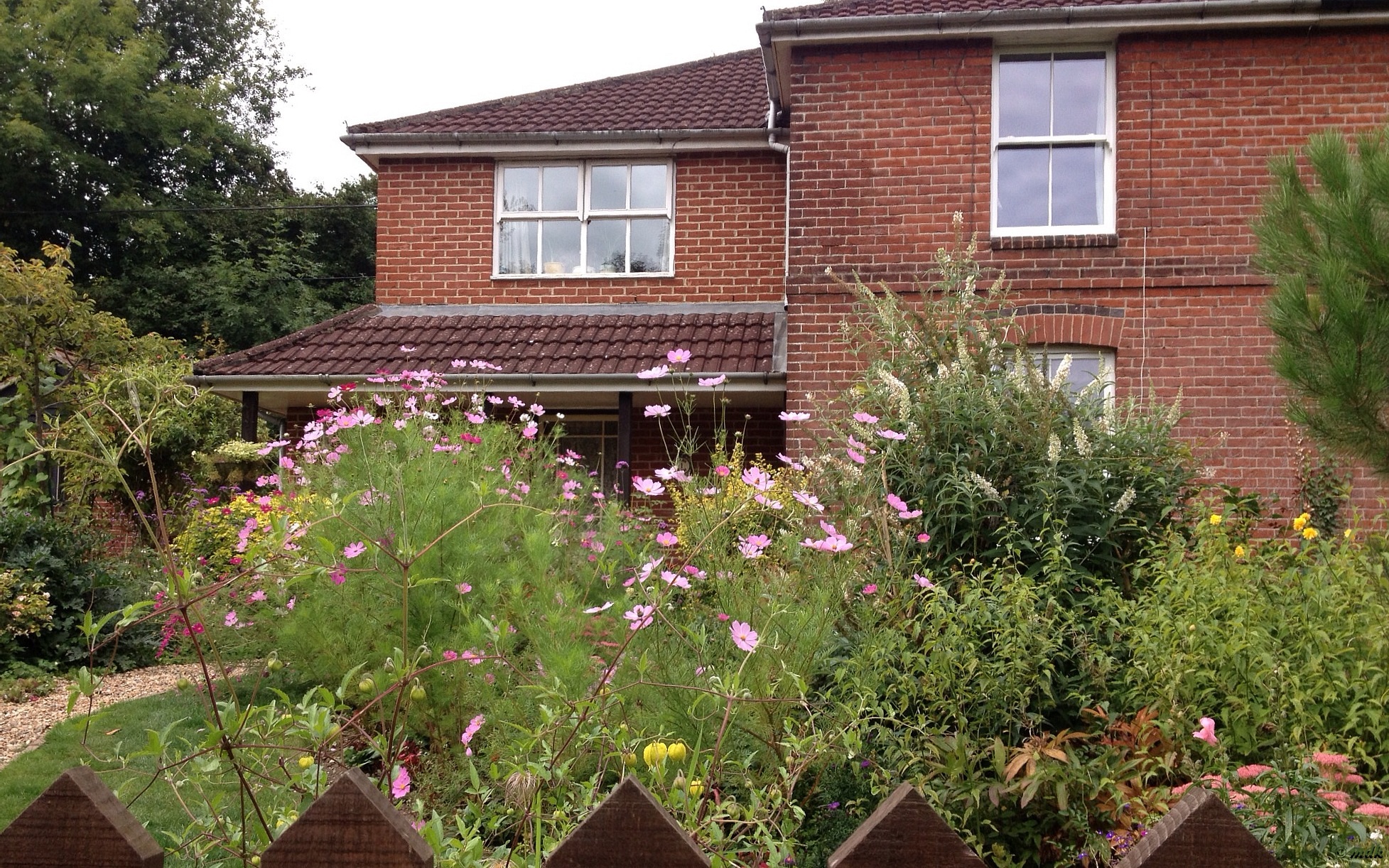 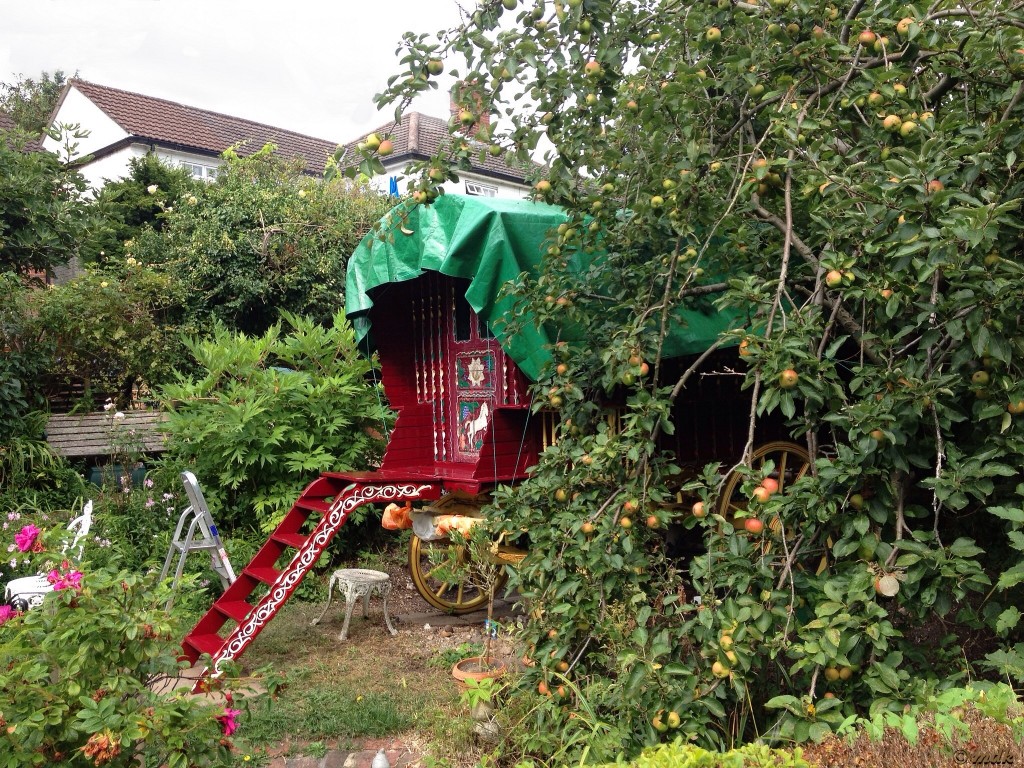 Eagle eyed Sirona spotted another creature on the path, the hairiest caterpillar either of us had ever seen. He didn’t want to stay still to have his photo taken but catterpiller Googling was more successful than beetle Googling and it turns out he will one day be a white ermine moth. I’d love to meet him when he’s transformed because the moth is beautiful, creamy white wings speckled with black dots and a furry collar, as if he’s wearing an ermine cape.

After a refreshing cool glass of diet coke in the peaceful garden of The Bridge pub and a much needed use of the facilities (I can’t believe I’d not had to pee in the bushes before this but I hadn’t), we were off along the final stretch of the Navigation. Time for another spot of house and garden envy and these are almost the best houses on the whole route. Manicured lawns and hedges, stone steps, winding paths, fences, wooden arches and little bridges all with huge, interesting houses attached, had us gasping and pointing all along the path. 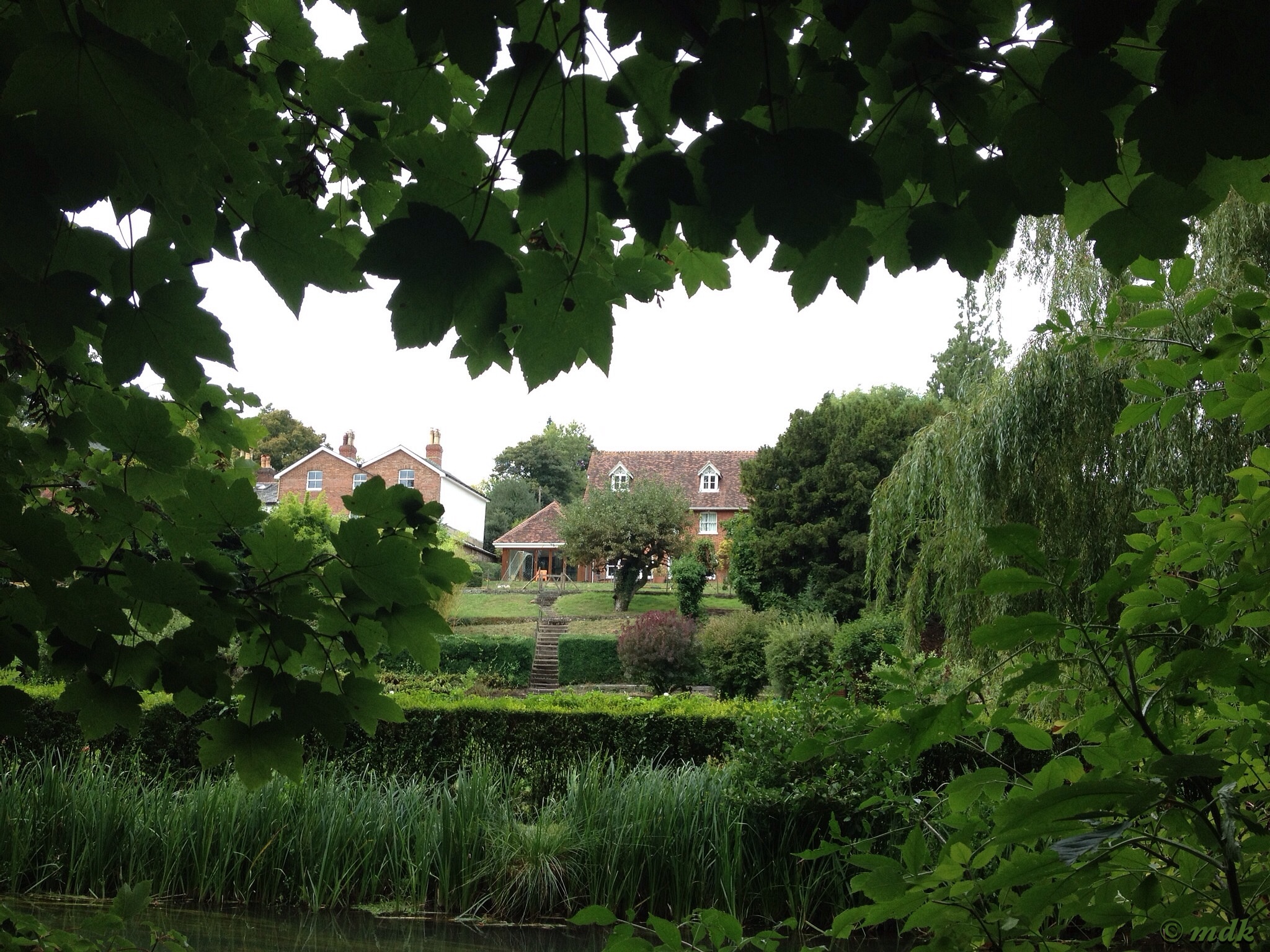 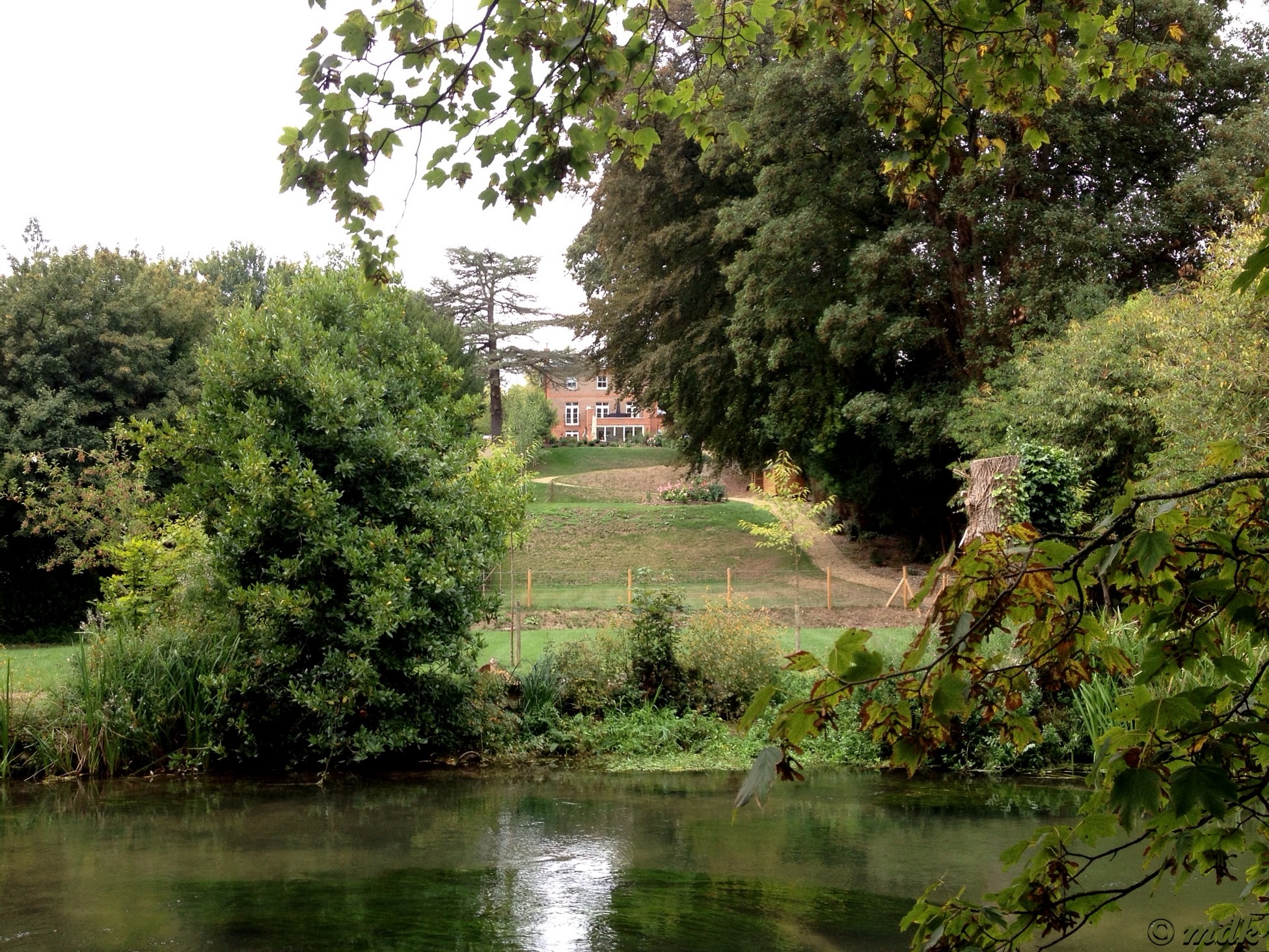 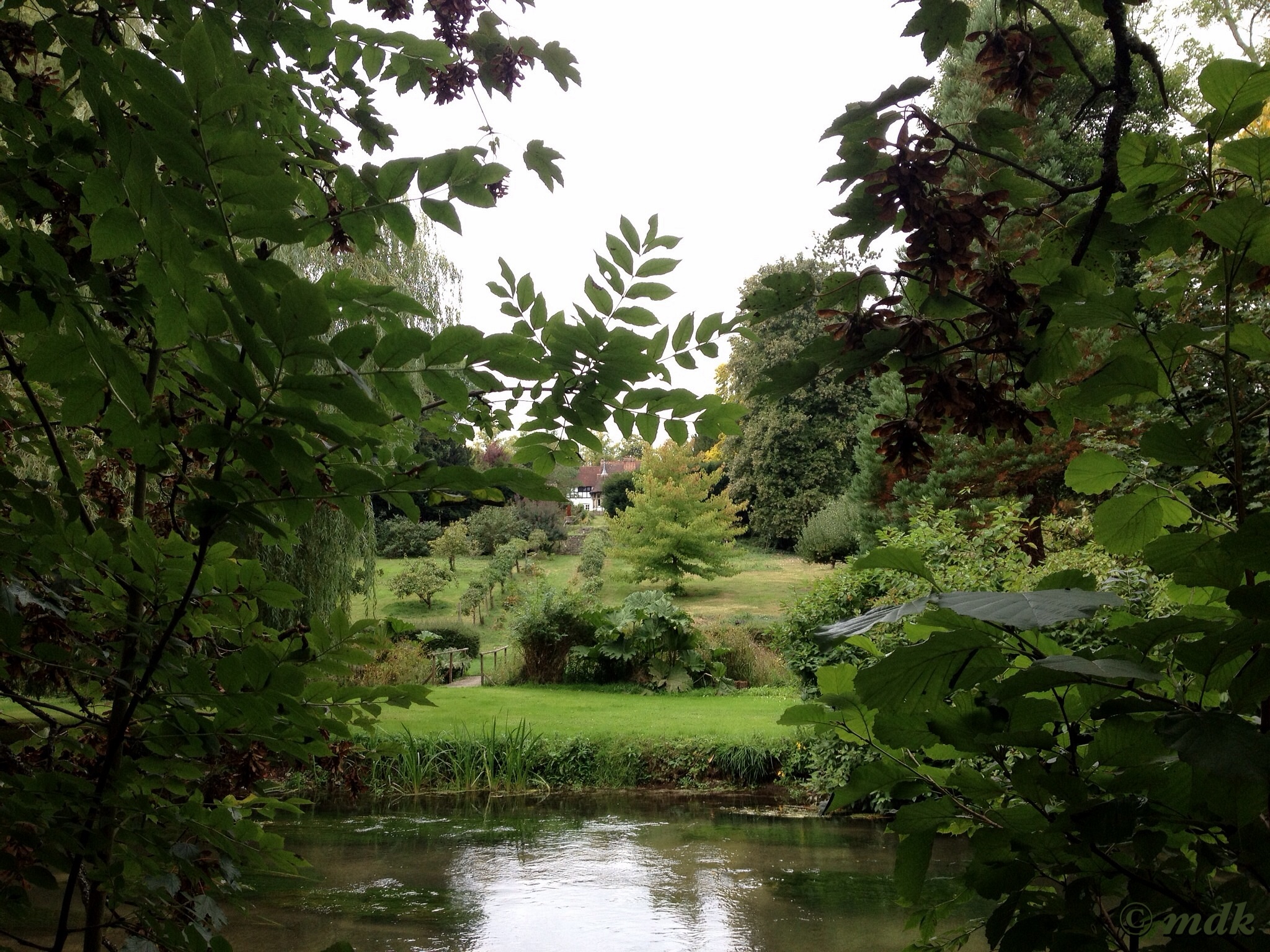 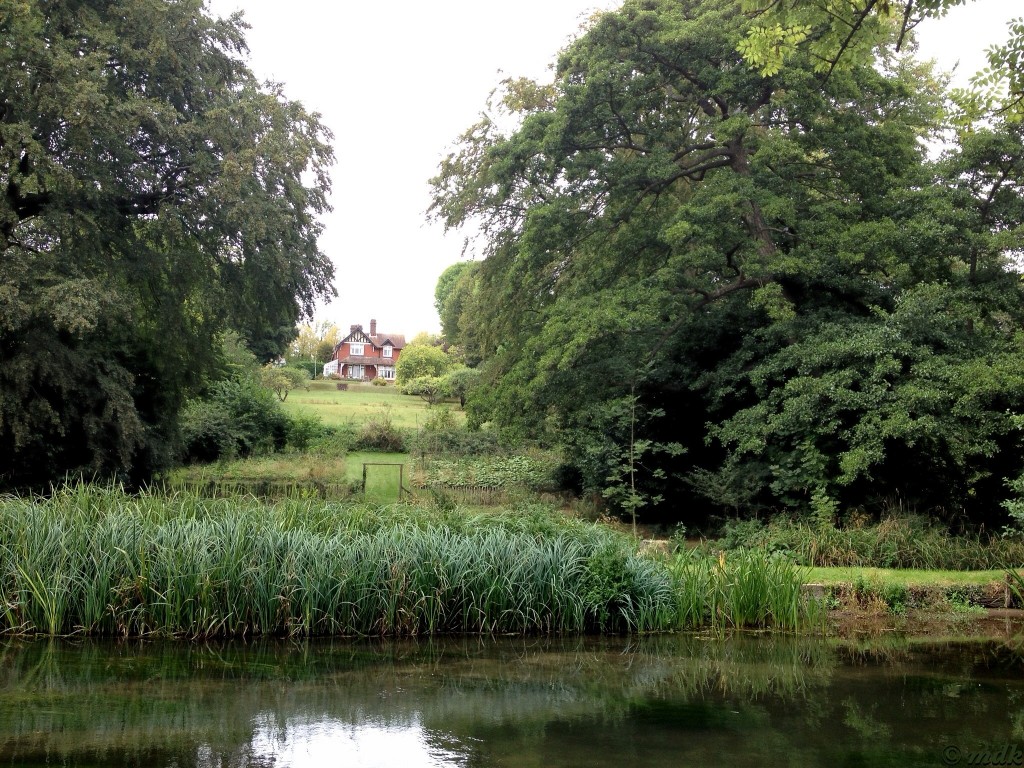 At Compton Lock it was too cold for teenage girls to be paddling their toes in the water and gossiping as there had been in muggy July. There were no boys proving their bravery by going through the weir on inflated tires either. There was another shiny new sign however. The sky was still grey and brooding but at least no rain had fallen so far and without baking sun and muggy air the miles felt like easy going. 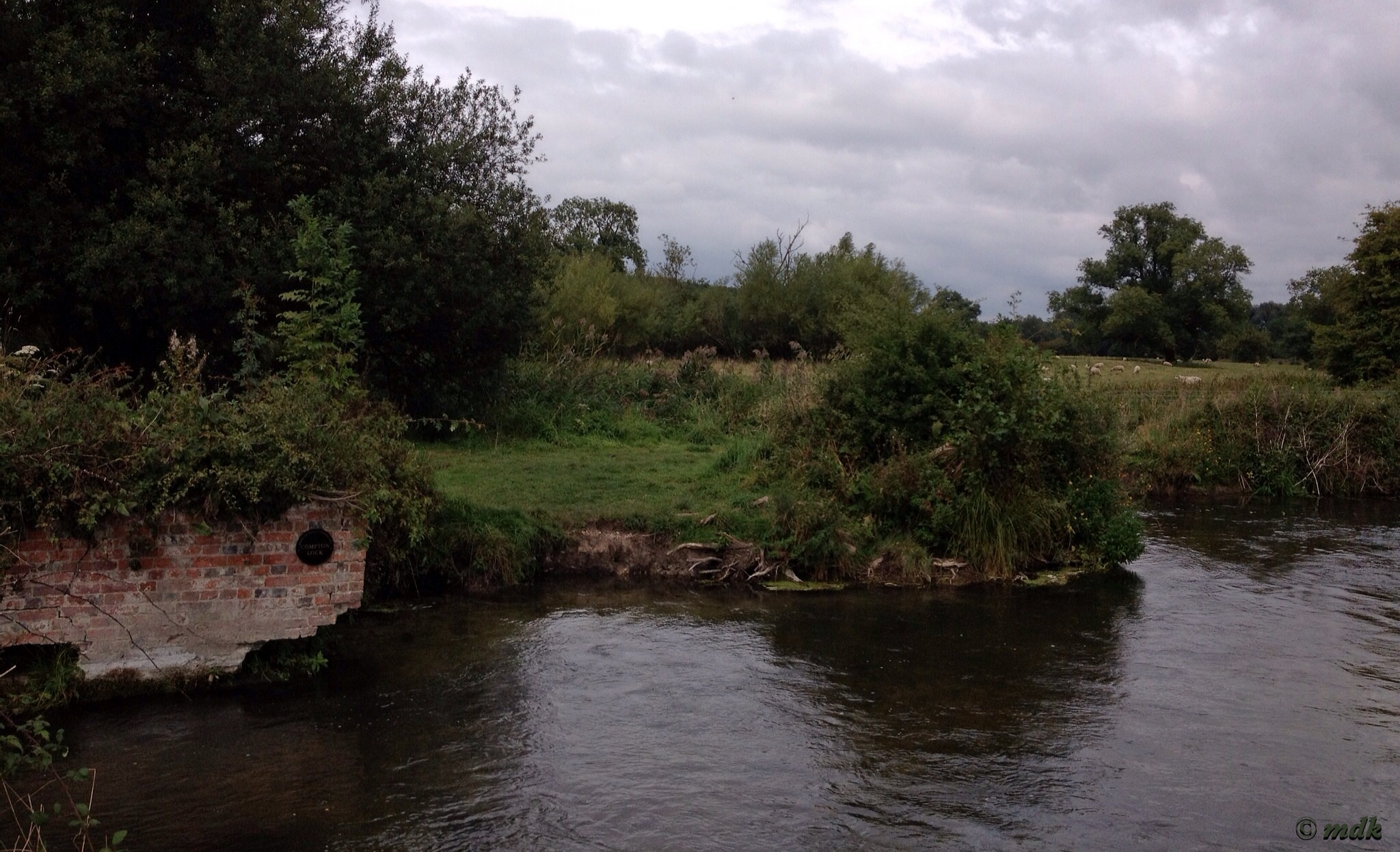 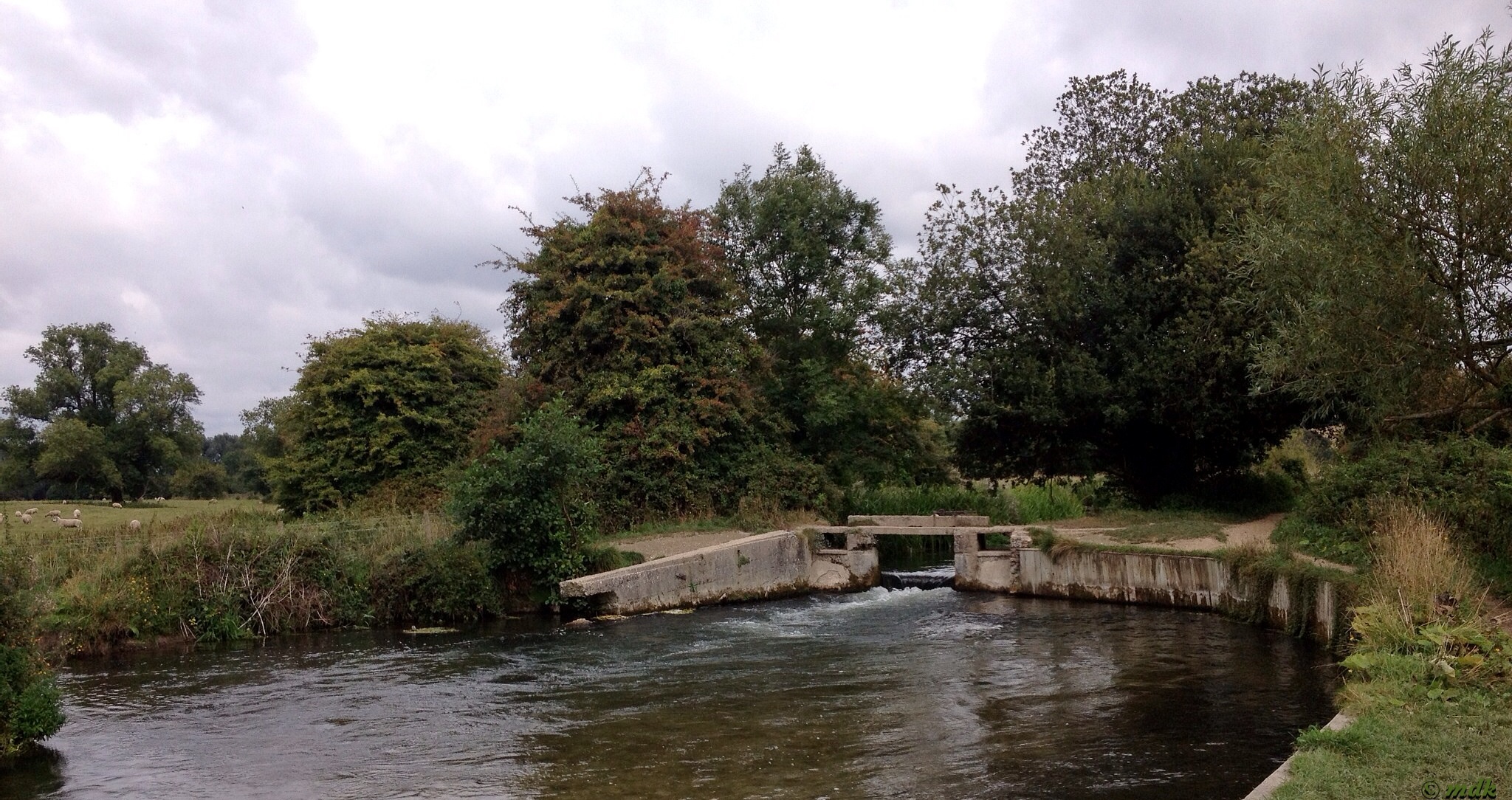 I pointed out the hill I used to sit on with my chocolate milk on all my Moonwalk training walks. Then I’d looked down over these fields and the river wondering what it was like and where the paths led. Somehow I felt quite nostalgic for all those gruelling walks. Then I pointed out the motorway, cars just visible through the trees, we were coming up to the Hockley Link Road. As we were looking two ducks splashed down into the river, reeds and forget me nots lined the bank and it all seemed rather serene despite the cars whizzing by just yards away. 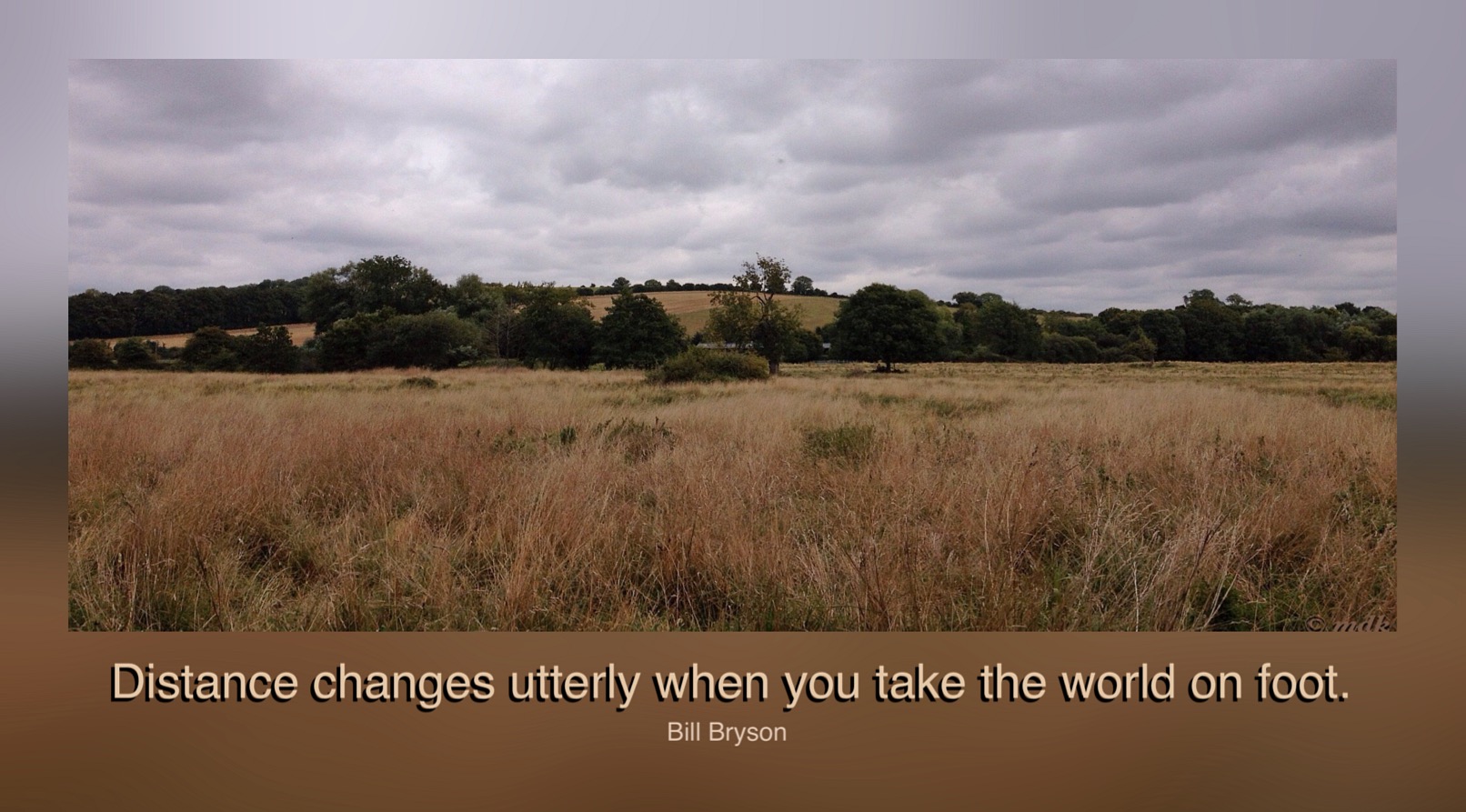 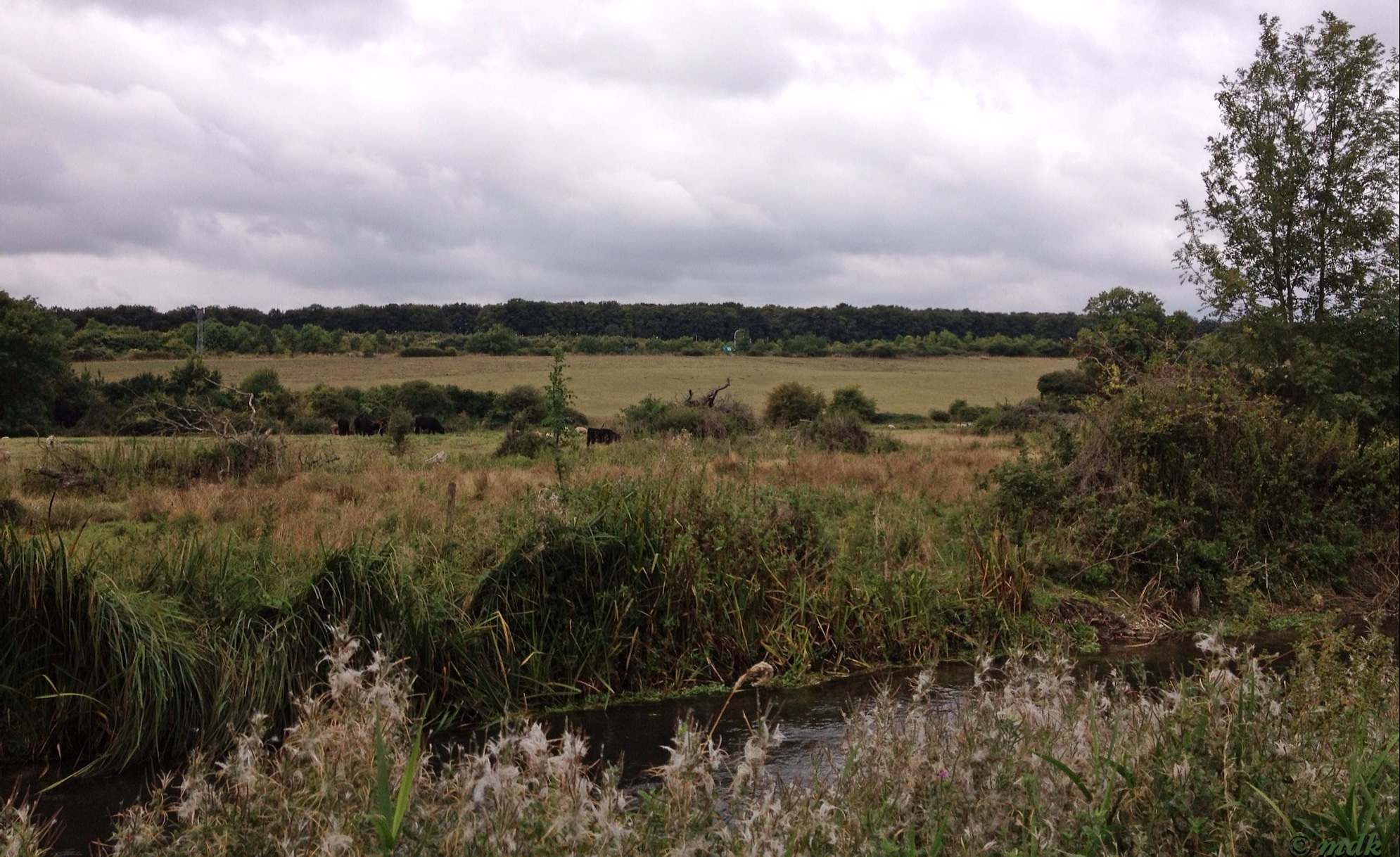 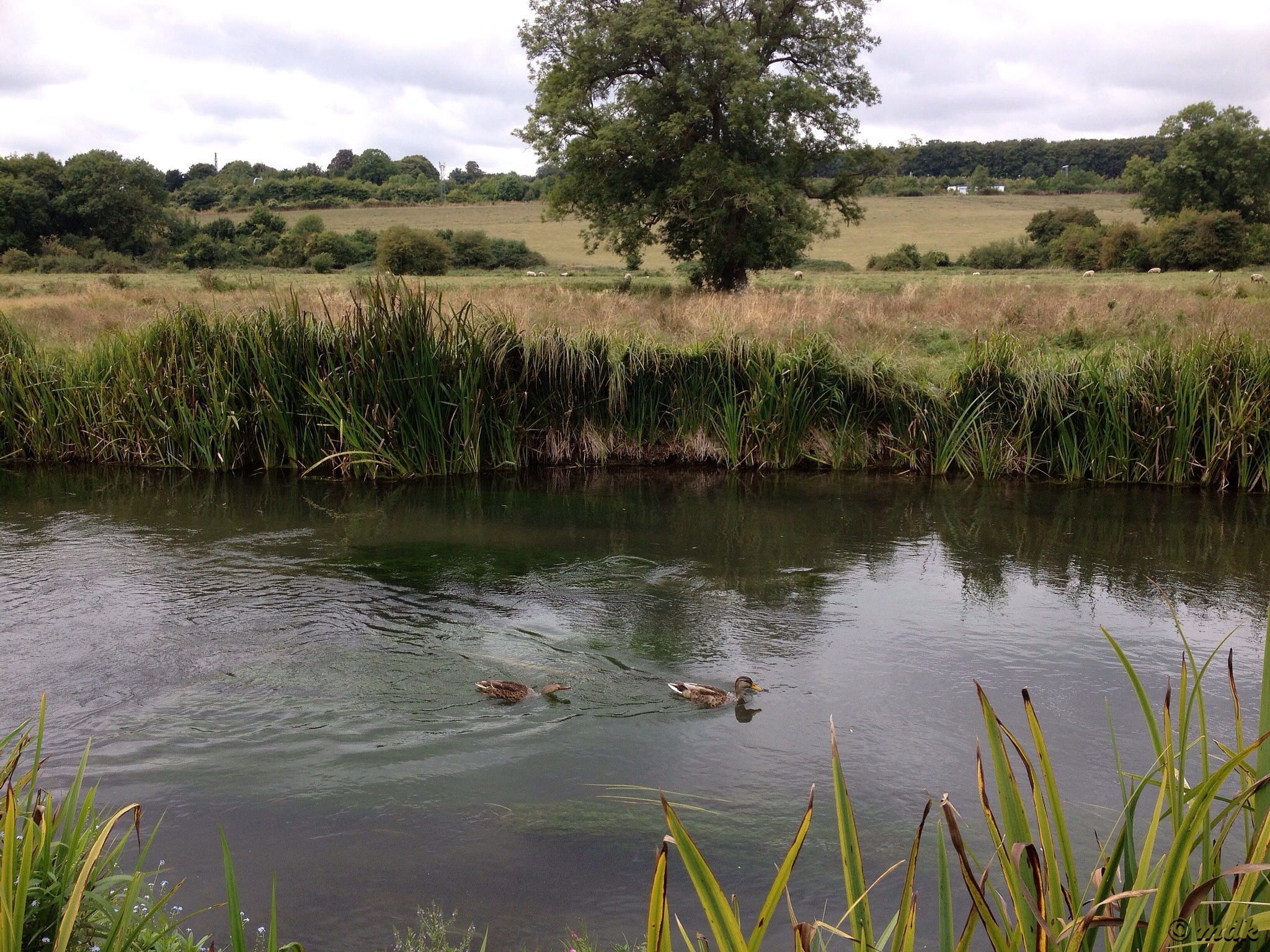 In no time at all we were crossing the Twyford Meads hatches, the three arches were part of a system for irrigating the fields back when the water meadows were farmed. Then, with one last look up at my hill, we strolled under the motorway bridge onto the Hockley Link Road and the last leg before Winchester. 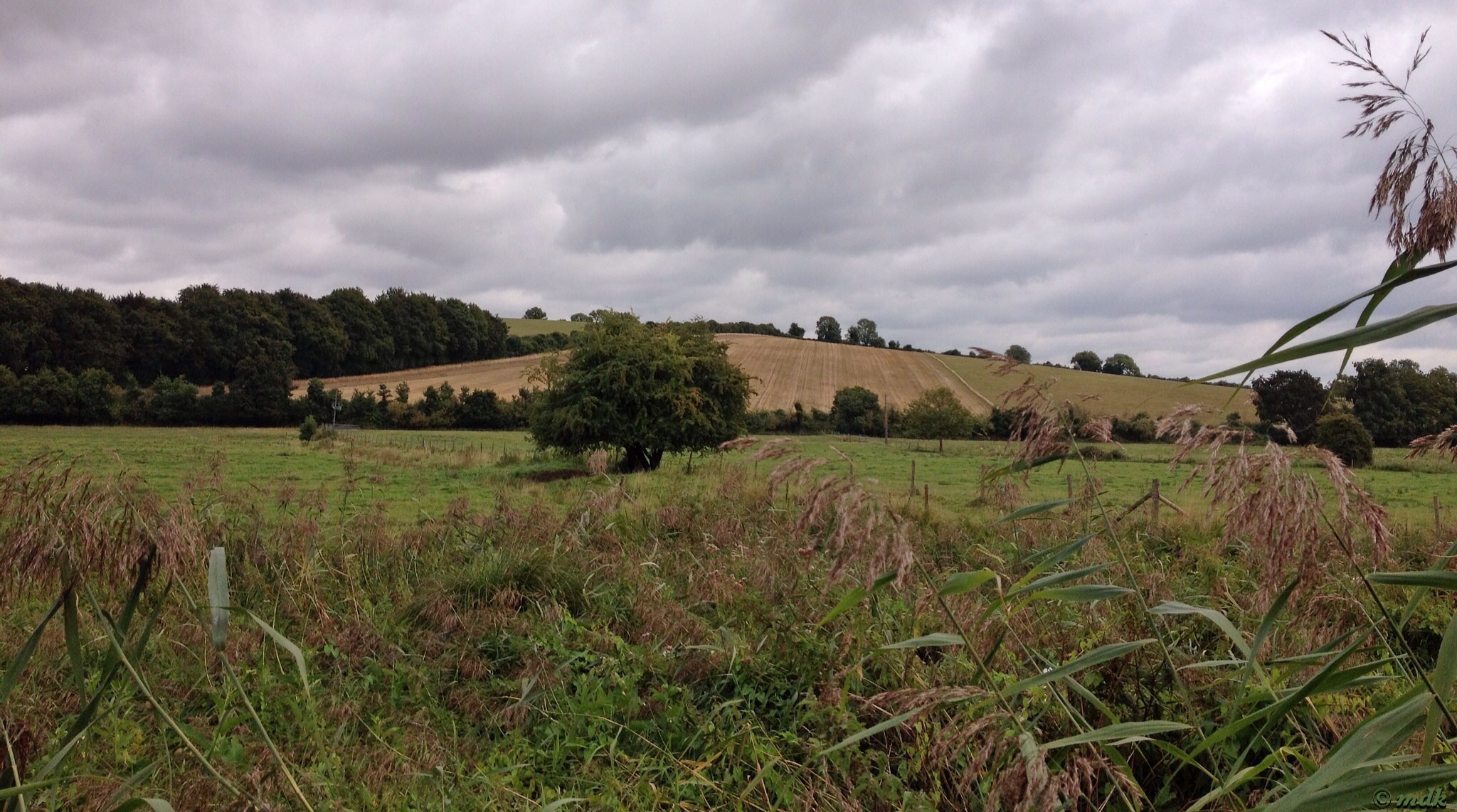 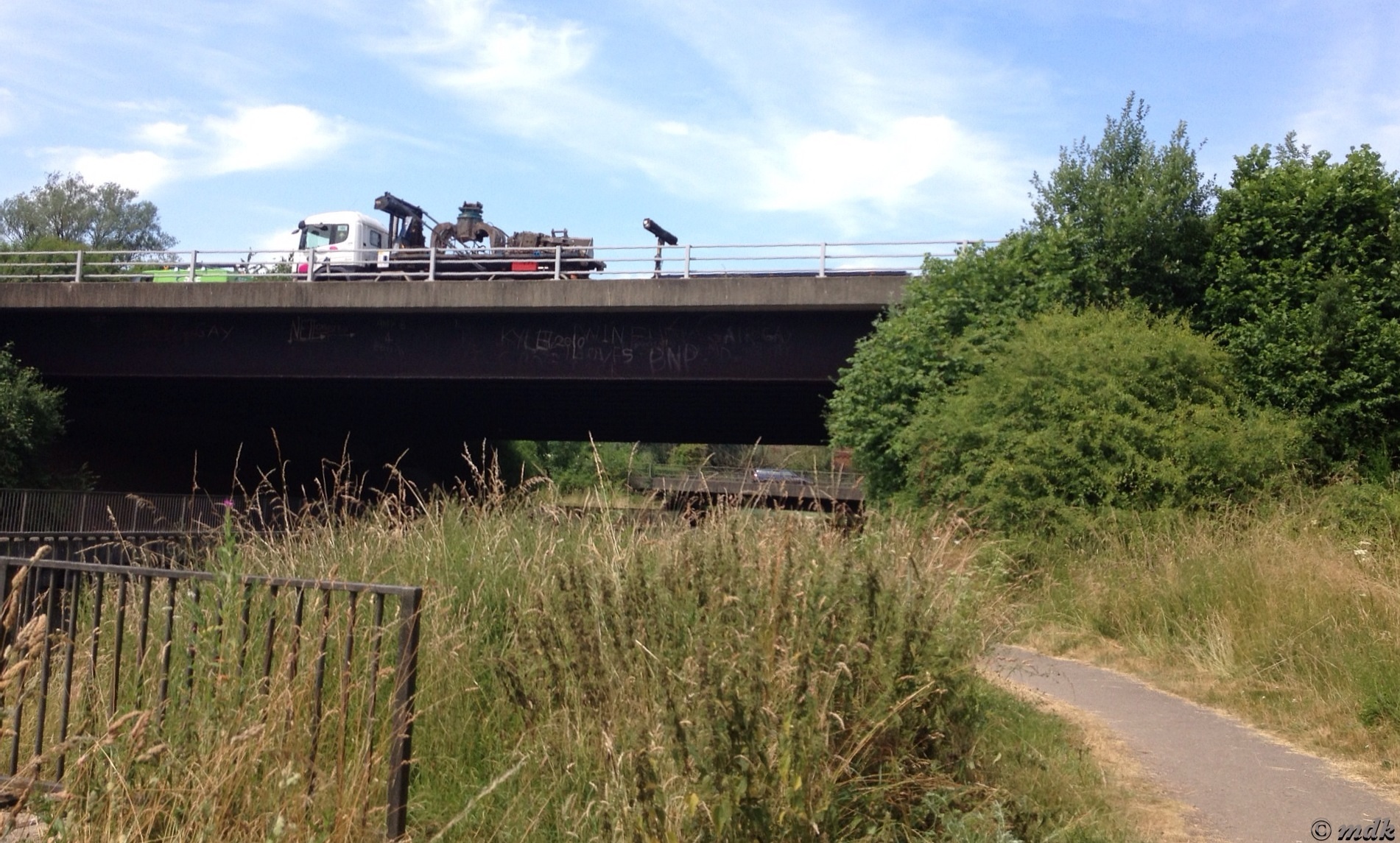 We were glad to leave the noise of the road behind and get back to the peace of the trees with their ivy entwined trunks. St Catherine’s Hill towered above us and Sirona was astonished when I told her I’d never climbed it. Twelve miles ino a walk is probably not the best time to climb a hill that steep But Sirona suggested we could drive out another day and tackle it. 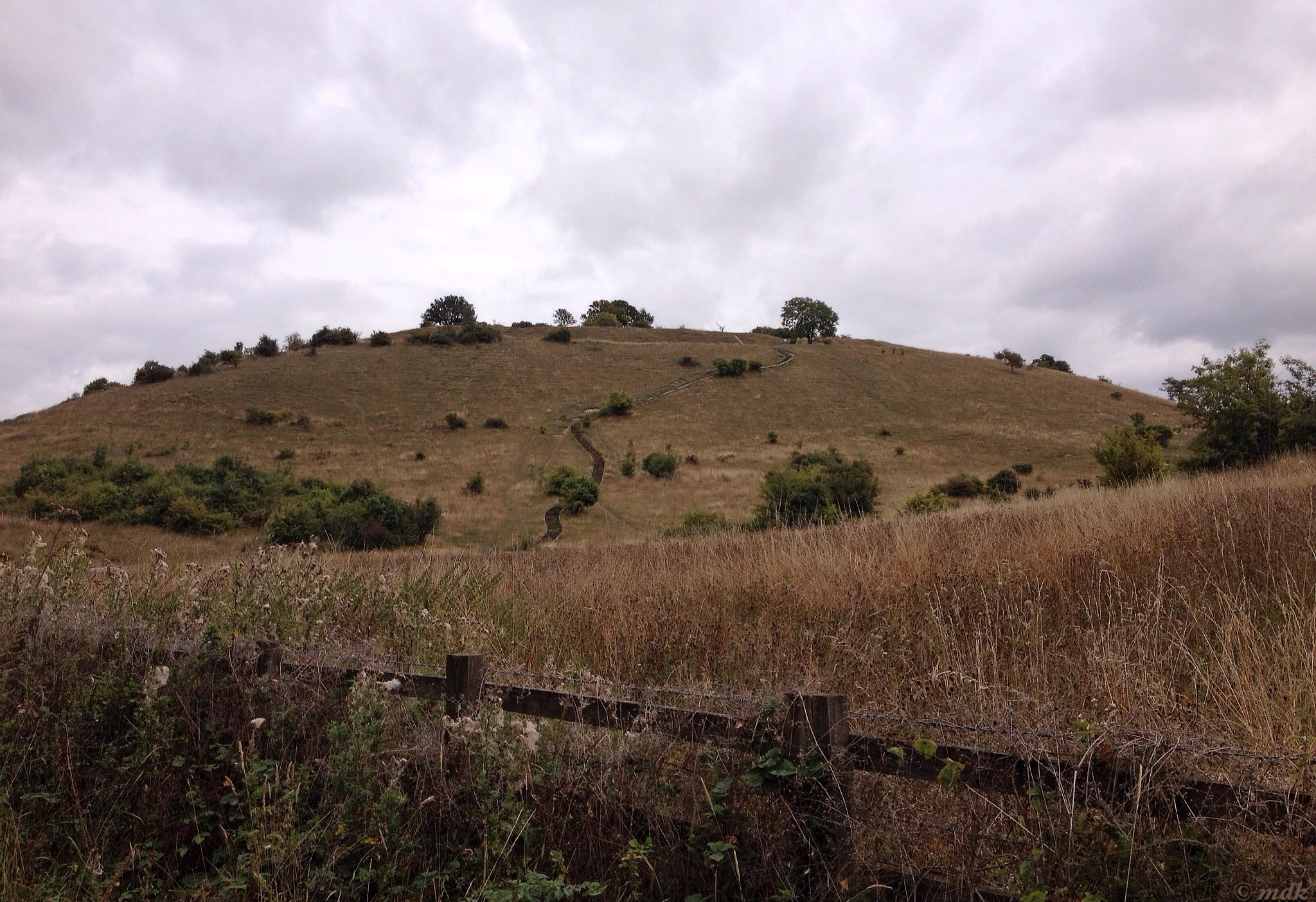 The clematis were a mass of wild haired blooms as we came to St Catherine’s Lock, the water boiled and tumbled below and we paused a moment to look at the lock mechanism and yet another new sign. Instead of taking the high path, where the stone barge sculpture stands, we took the thin trail right on the water’s edge. It was a calculated risk, I wasn’t sure how well maintained the narrow path would be but we were rewarded with fantastic views over Winchester that would otherwise have been hidden by the trees. 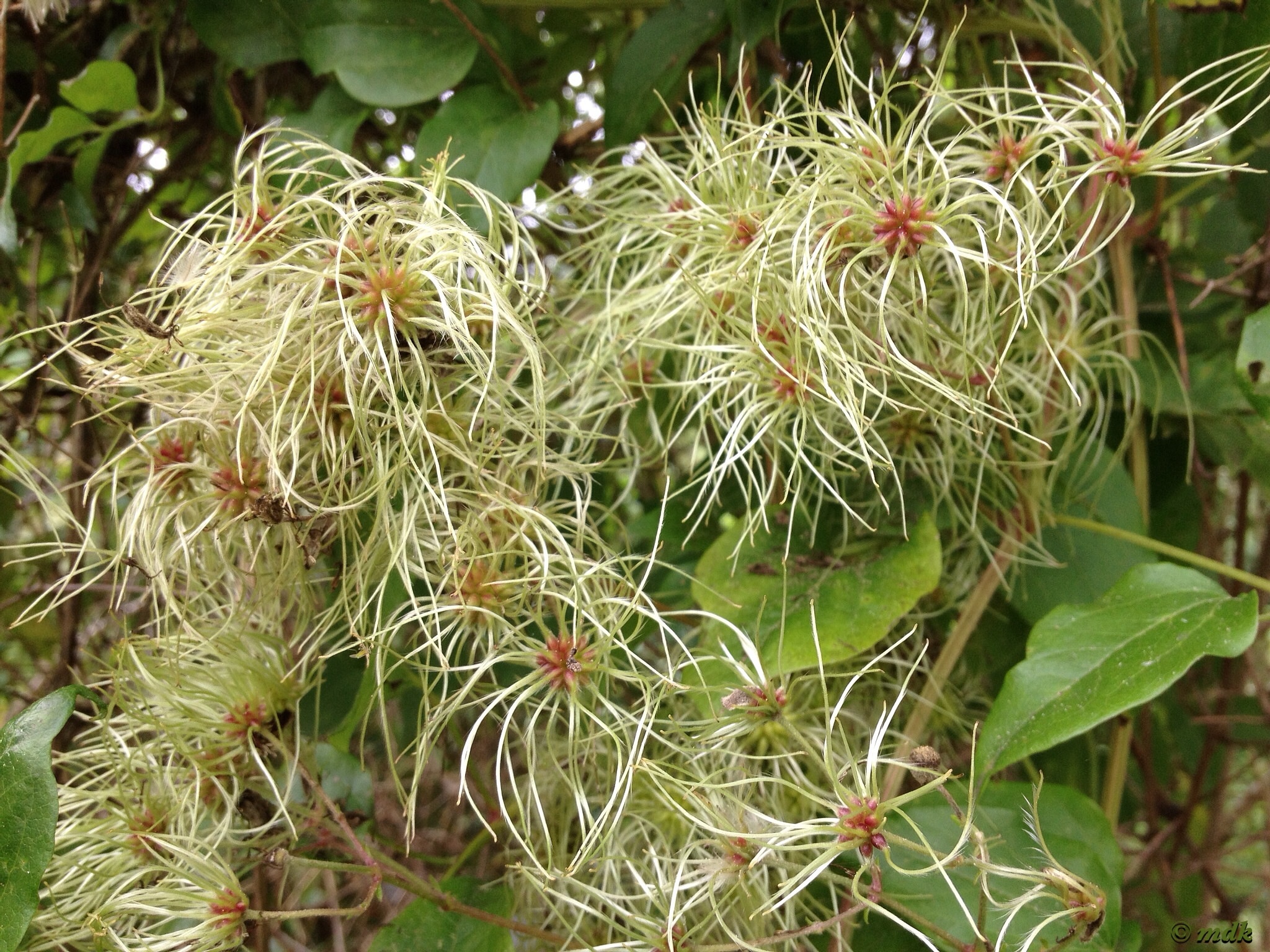 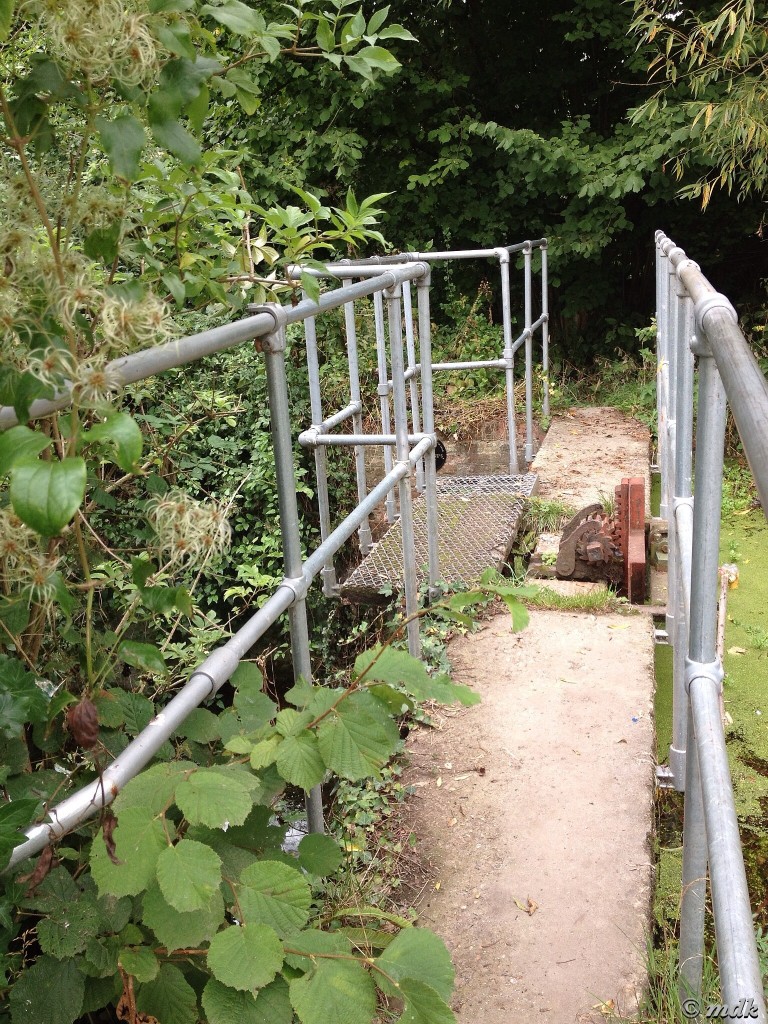 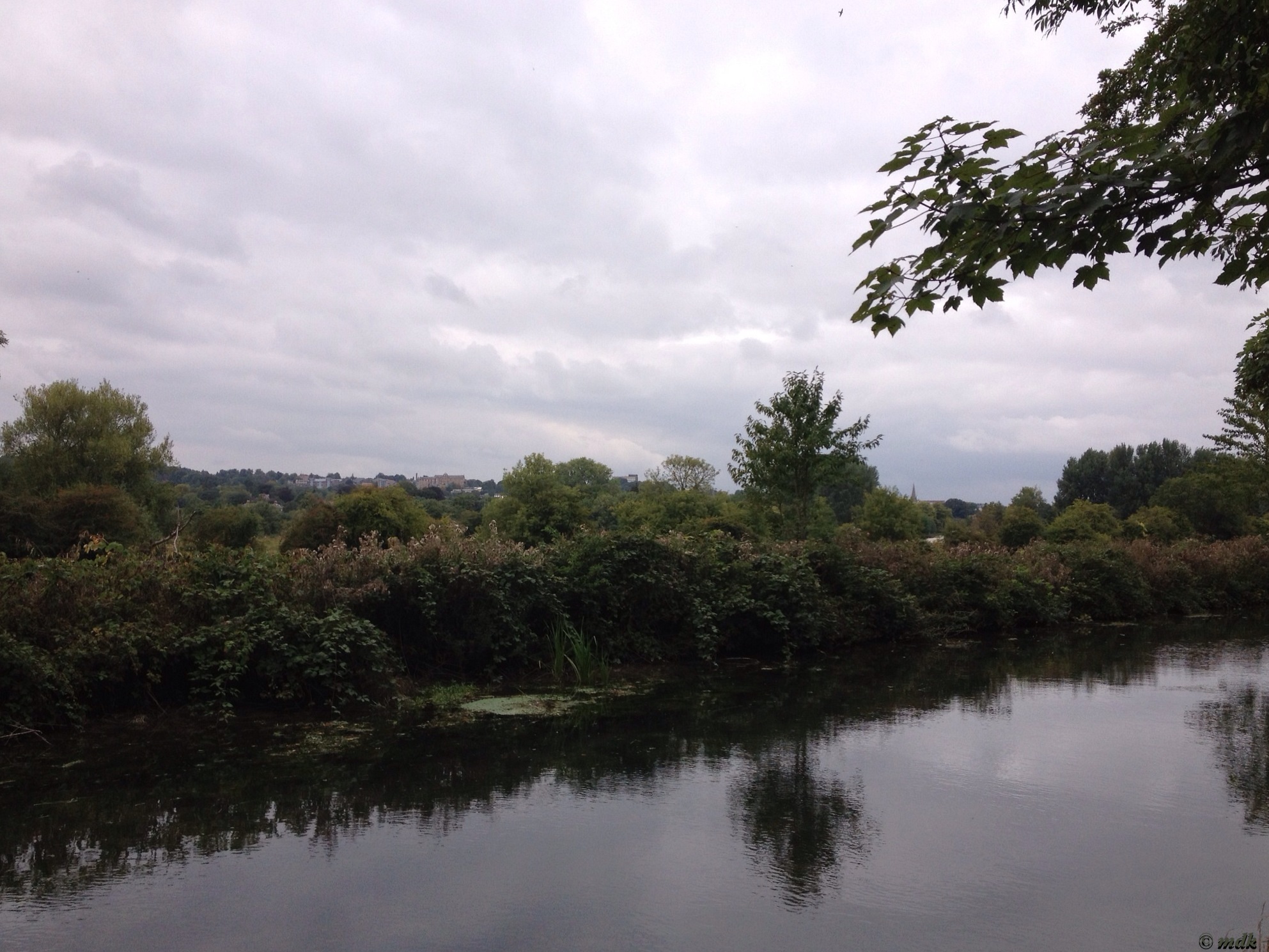 As we strolled along the thin trail I explained that, last time, I’d ended up walking along the Winchester College fields, looking at the Navigation path on the opposite bank but unable to work out how to get to it. Of course, when we actually got to the place where I couldn’t find the path, Sirona spotted it right away. This did not help my reputation for having a terrible sense of direction any. In fairness though, until I was on the college field, I had no idea there was another path on the other side of the river so I wasn’t actually looking for it. 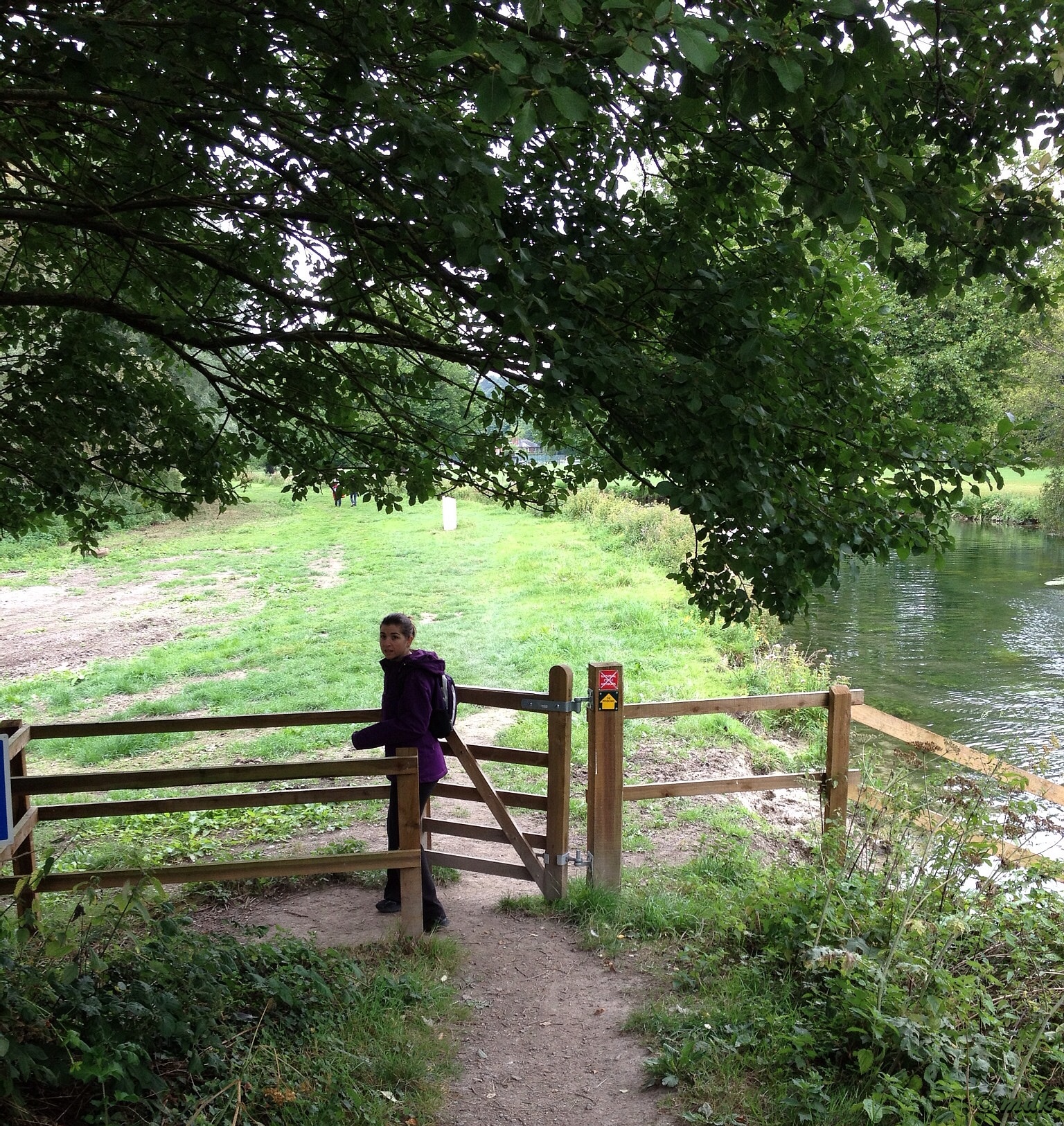 So we wandered down the trail beside the final stretch of the Navigation. Marsh ragwort was blooming, swans were swimming lazily down stream and people were playing tennis on the college courts opposite. It felt as if all was well with the world, you couldn’t have dreamed a more idyllic scene. The last of the triangular Navigation markers was there too, the final piece of the puzzle. 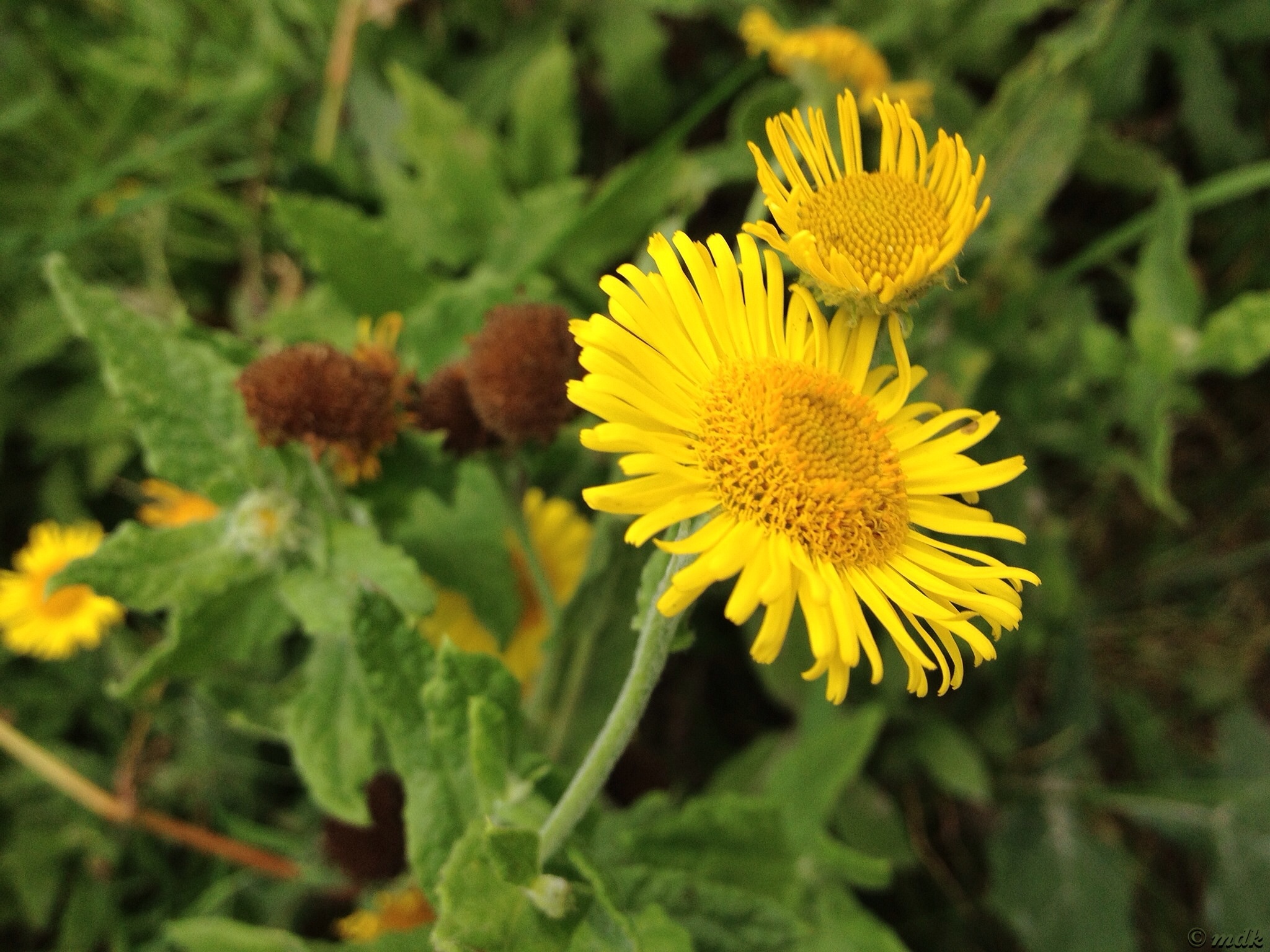 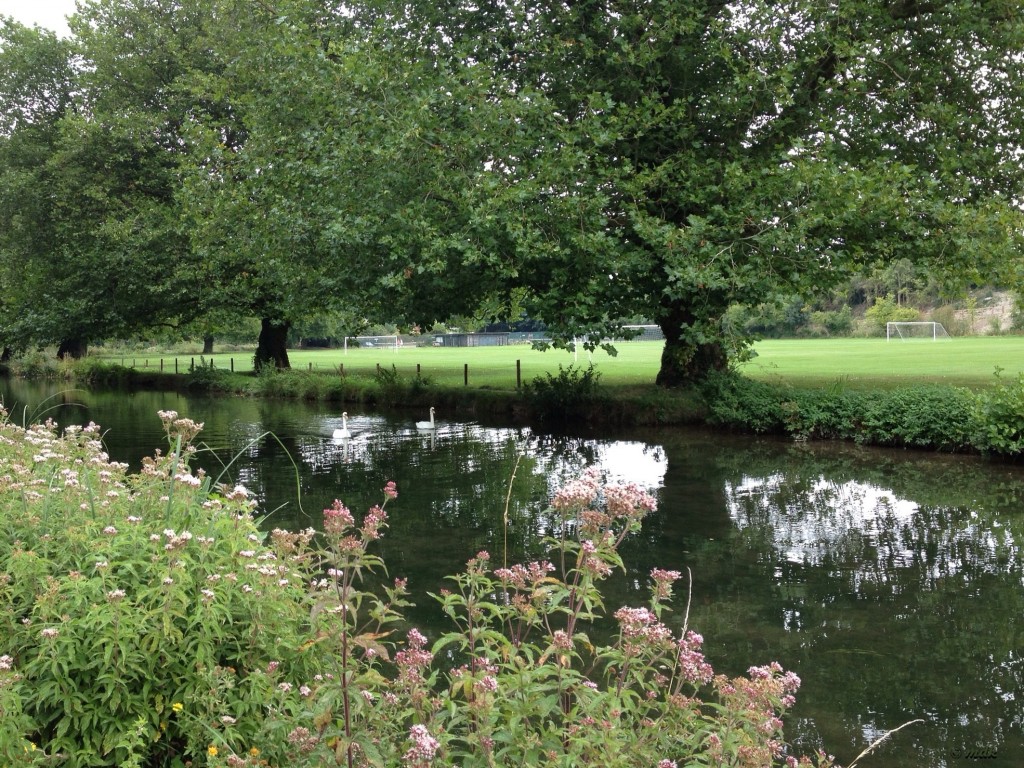 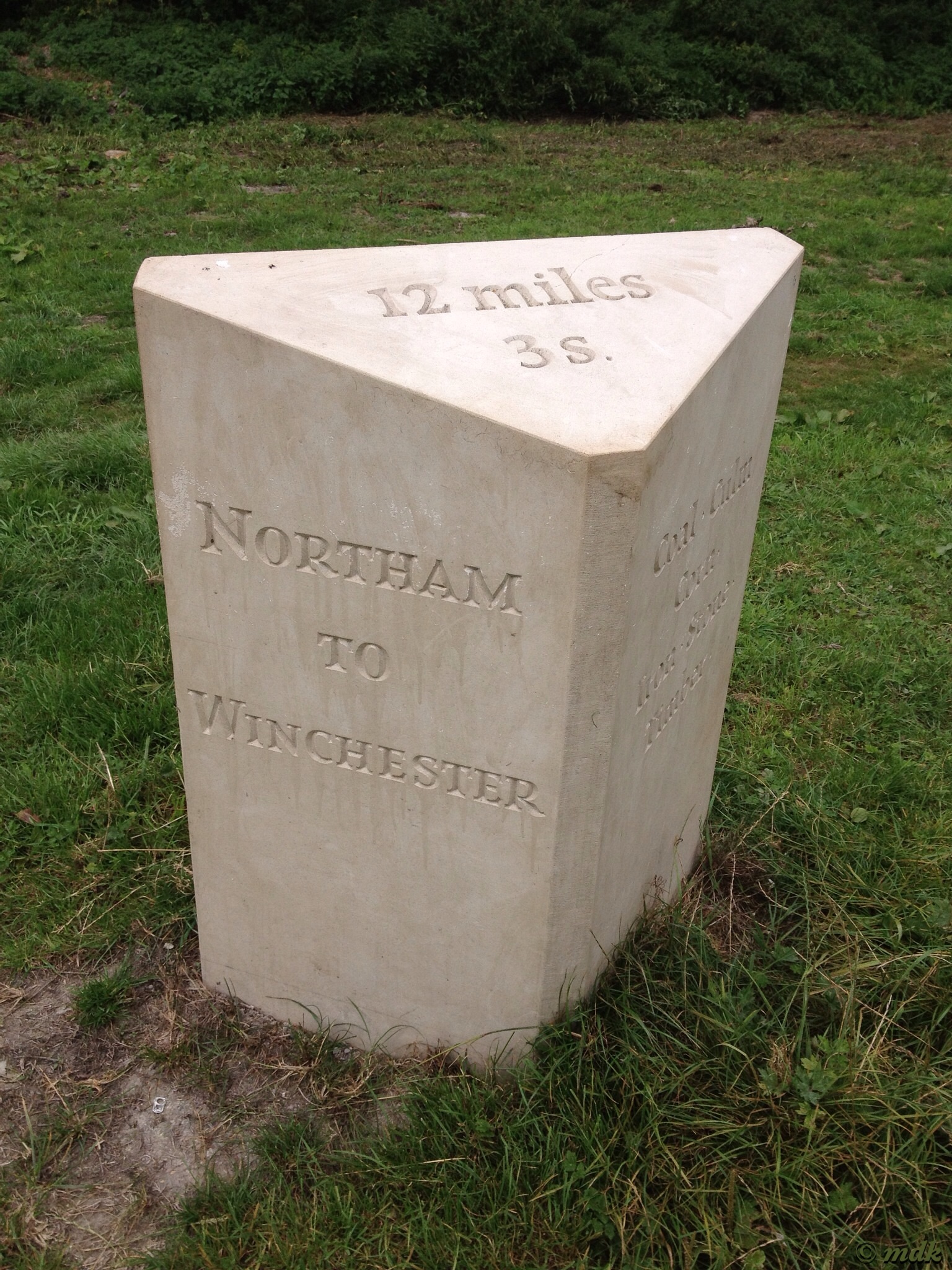