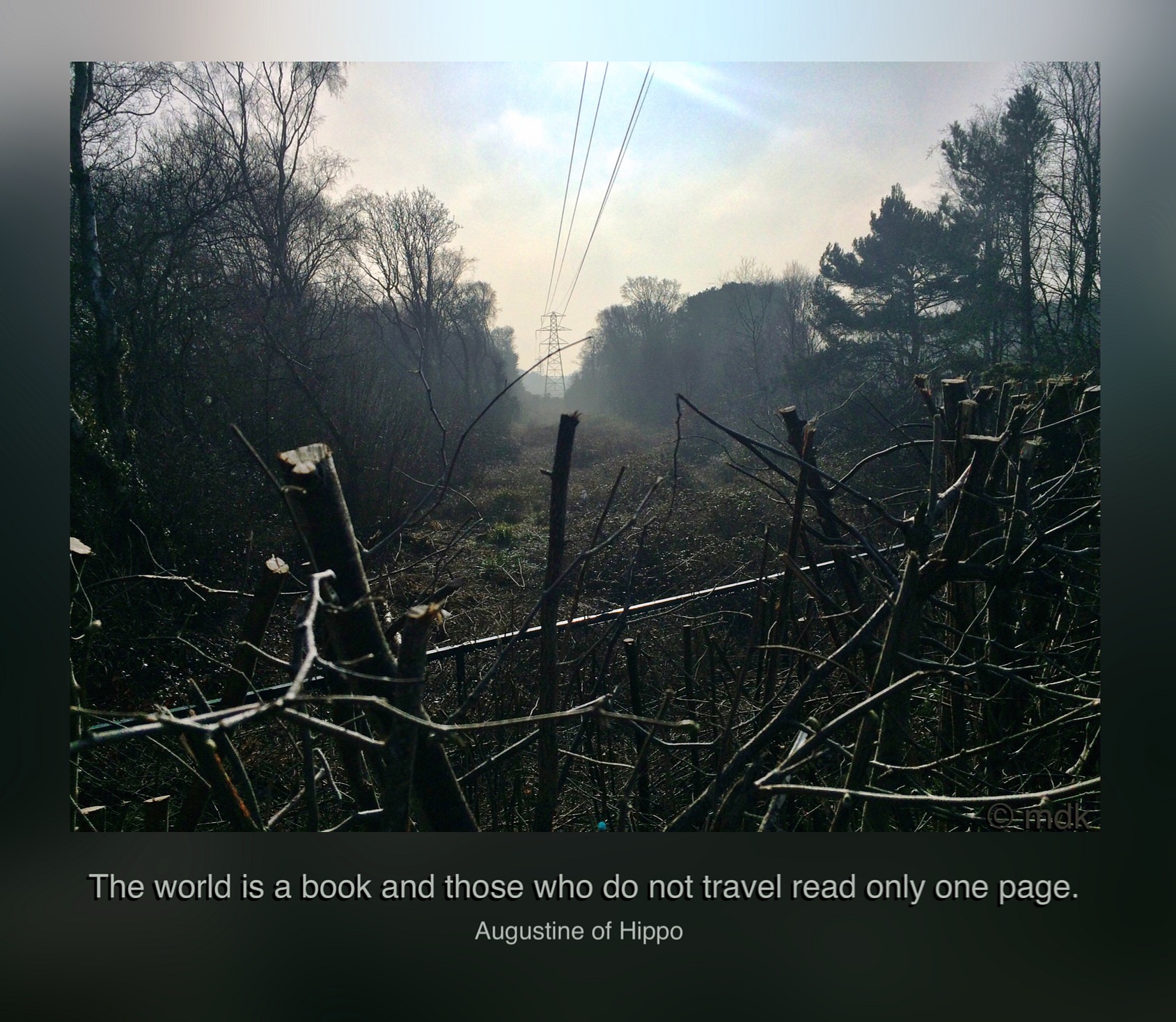 Sunday started rather early. Commando was taking a run leader course at the Bourne Academy in Bournemouth and CJ and I went along to have a day by the seaside. Once he’d disappeared into the building we set off into a misty morning that held a promise of sun later on. Although we were heading for Bournemouth beach, the first part of our journey took us south west into Poole.

Like many people, my main experience of Poole is of the ferry port heading for a cross channel ferry. It was a journey we’d taken many times but I knew very little about the place. In fact there have been people living in the area since before the Iron Age and it first became an important wool port in the twelfth century, in much the same way as Southampton. By the eighteenth century it was one of the busiest ports in Britain and played a large part in the D-Day invasion. These days the natural harbour and blue flag beaches make it a tourist attraction but we would be merely passing through.

Unsurprisingly,  town’s name means a place near a pool or creek and we were heading for the Bourne River and a pool, or at least a coy pond. We had a two mile plus walk before we reached the river and the pond but at least it was a fairly straight one and I’d mapped it all out beforehand so we didn’t get lost. Just before nine we got our first sight of the Bourne valley. A long line of pylons stretched ahead into the mist and the heathland sparkled with dew. Somewhere down there was the river that gave its name to Bournemouth but we couldn’t see it. This, minus the pylons, was what the whole area once looked like. Now the towns of Pool and Bournemouth have eaten up most of the wilderness and the Bourne Valley Naure Reserve is the largest tract of remaining heathland.  Soon we passed a large Harvester pub and a giant Sainsbury’s, both closed at this time on a Sunday morning then we were looking over Talbot Heath. 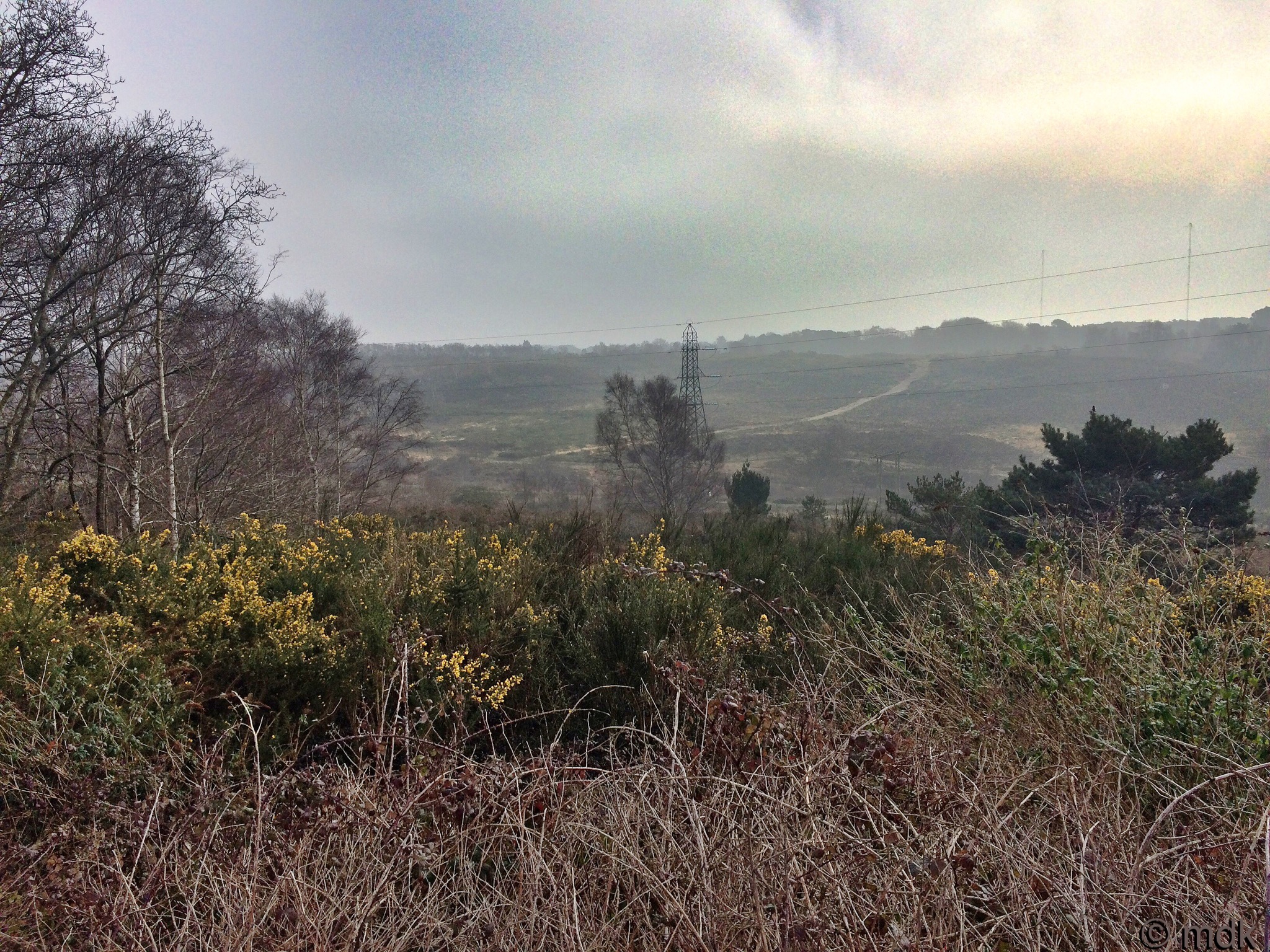 Apparently there is an ancient burial mound somewhere on the heath along with a network of footpaths, cycle tracks, sand lizards, dragonflies and Dartford Warblers. Sadly, we had no time to explore although we stopped for a moment at a handy bench and I broke out some small bottles of chocolate milk. While I searched for snack bars most of mine got spilled when an off the lead dog took a little too much interest in it. Then it was off along the firm gravel path towards Coy Pond Road. 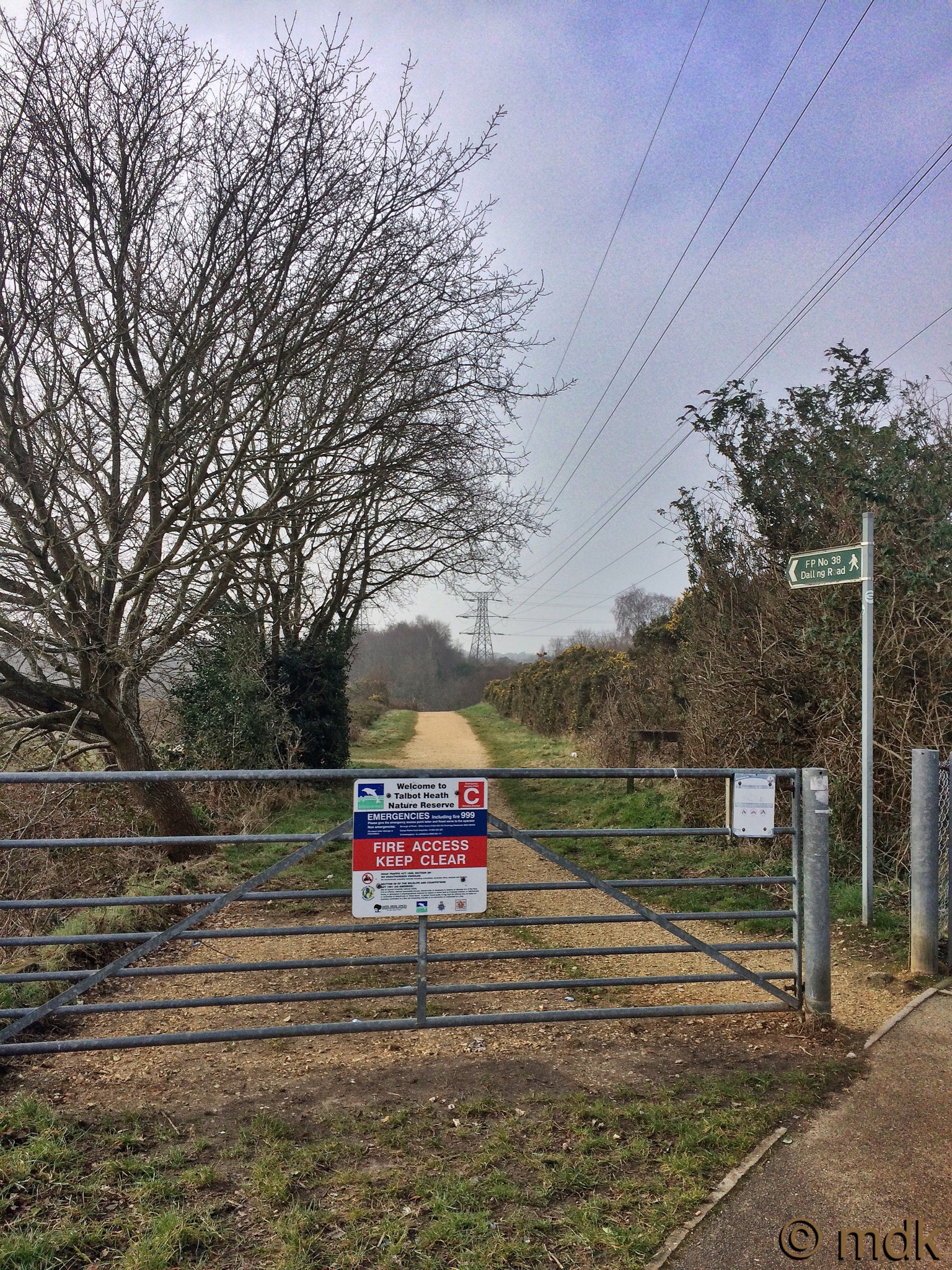 We ambled along a quiet street, another short footpath and through the edge of an industrial estate until we finally came to the railway arch I’d been looking for. It was the final landmark. On the other side was Coy Pond Road and the start of the long thin strip of parkland that would take us to the sea. Now I could stop looking at my instructions. 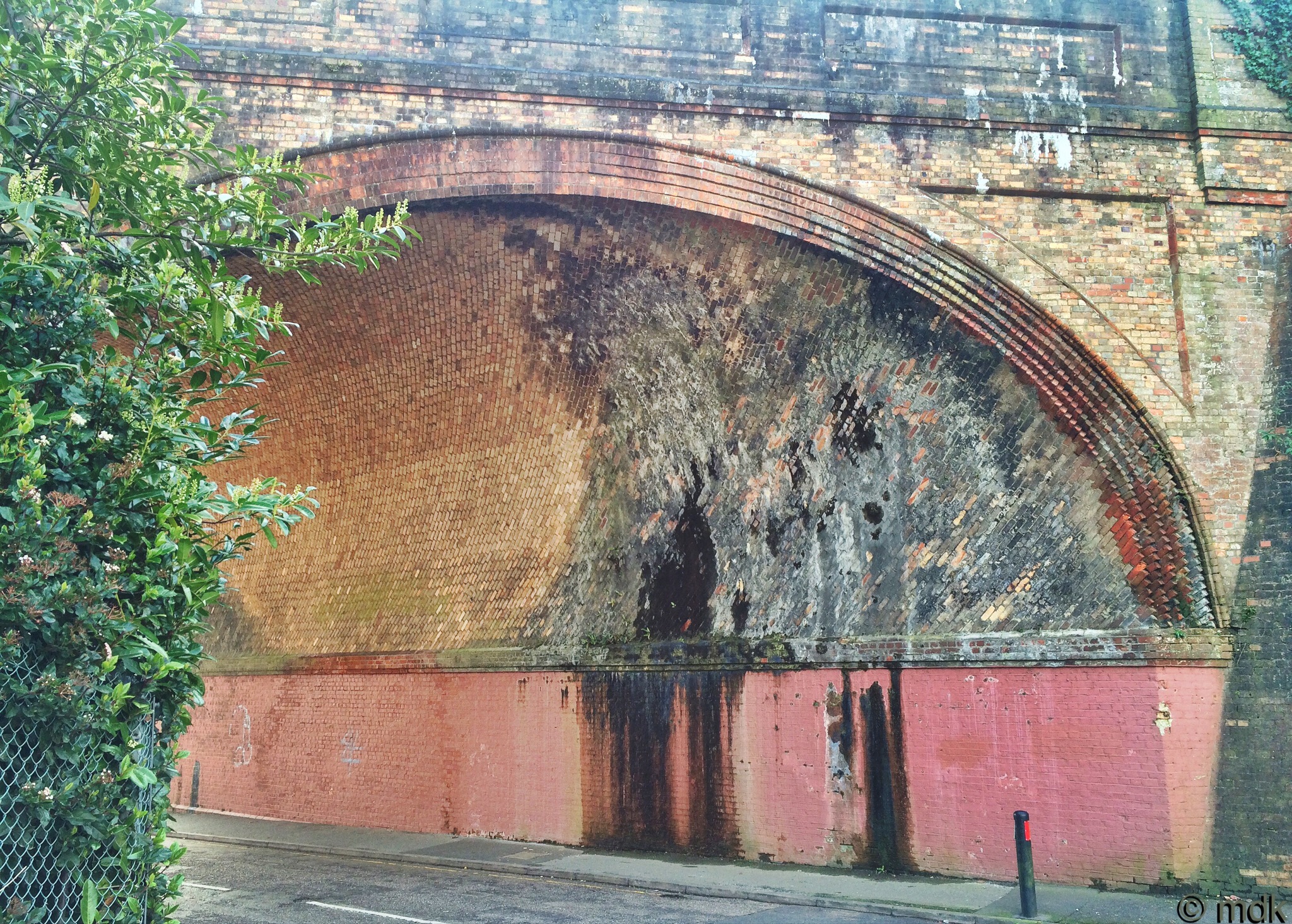 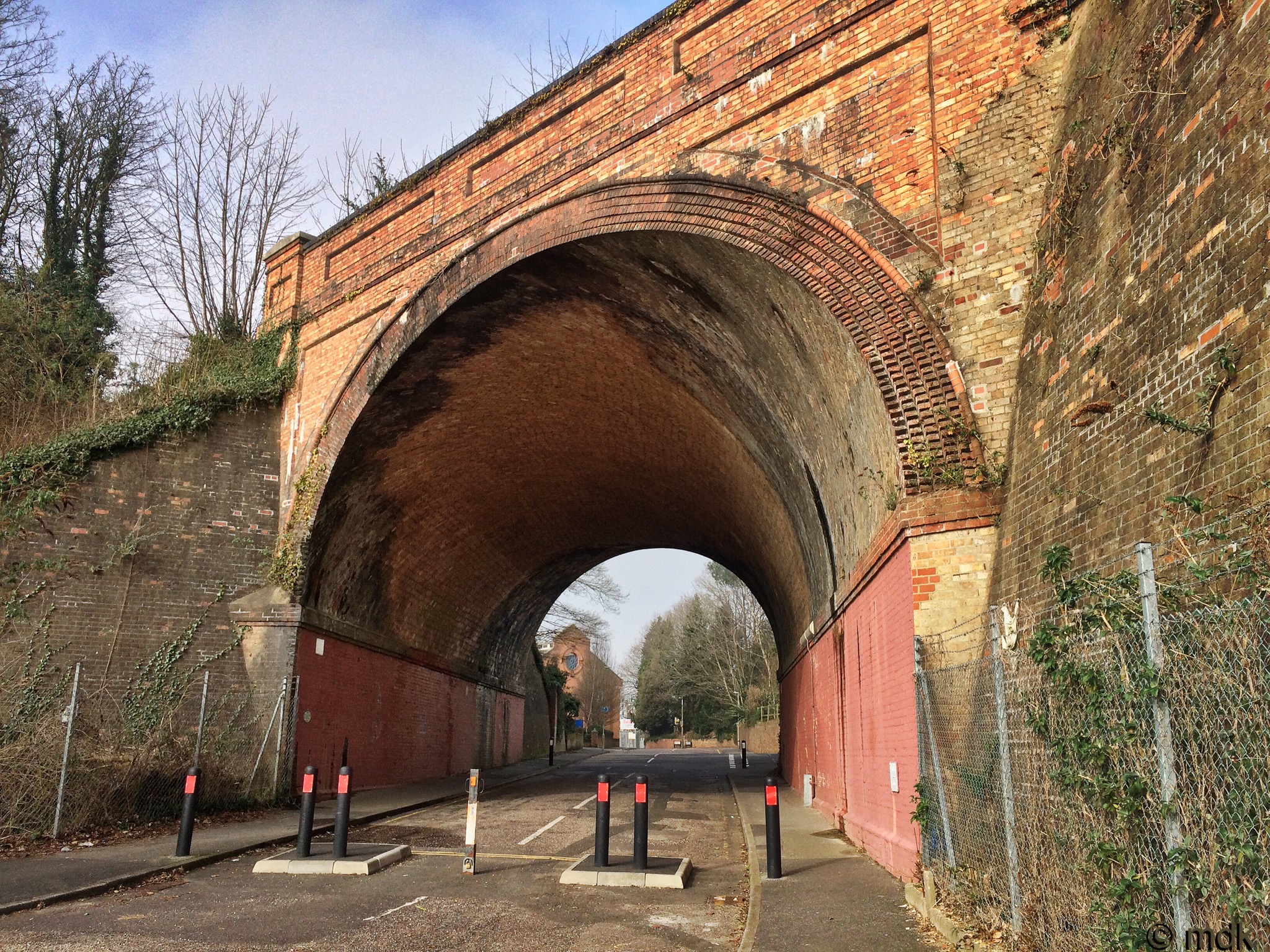 Even with our chocolate milk stop we’d made good time. It was half past nine and we’d walked two and a half miles. There were two and a bit more before we’d see the sea. Down a small side road we found steps leading to Coy Pond Gardens. The park was narrower than I’d expected, just a path and two strips of grass with a line of weeping willow and alder trees running through the centre. Both sides were bounded by houses with gardens opening onto it. It seemed a lovely place to live. Between the trees we got our first proper sight of the Bourne, river. In truth it was little more than a stream and, in fact, the name comes from the Middle English word burn, mean a small stream. The Bourne begins in Poole and flows for 7km (4.34 miles), much of which is culverted, to Bournemouth Pier, we’d be following it for the rest of our journey. 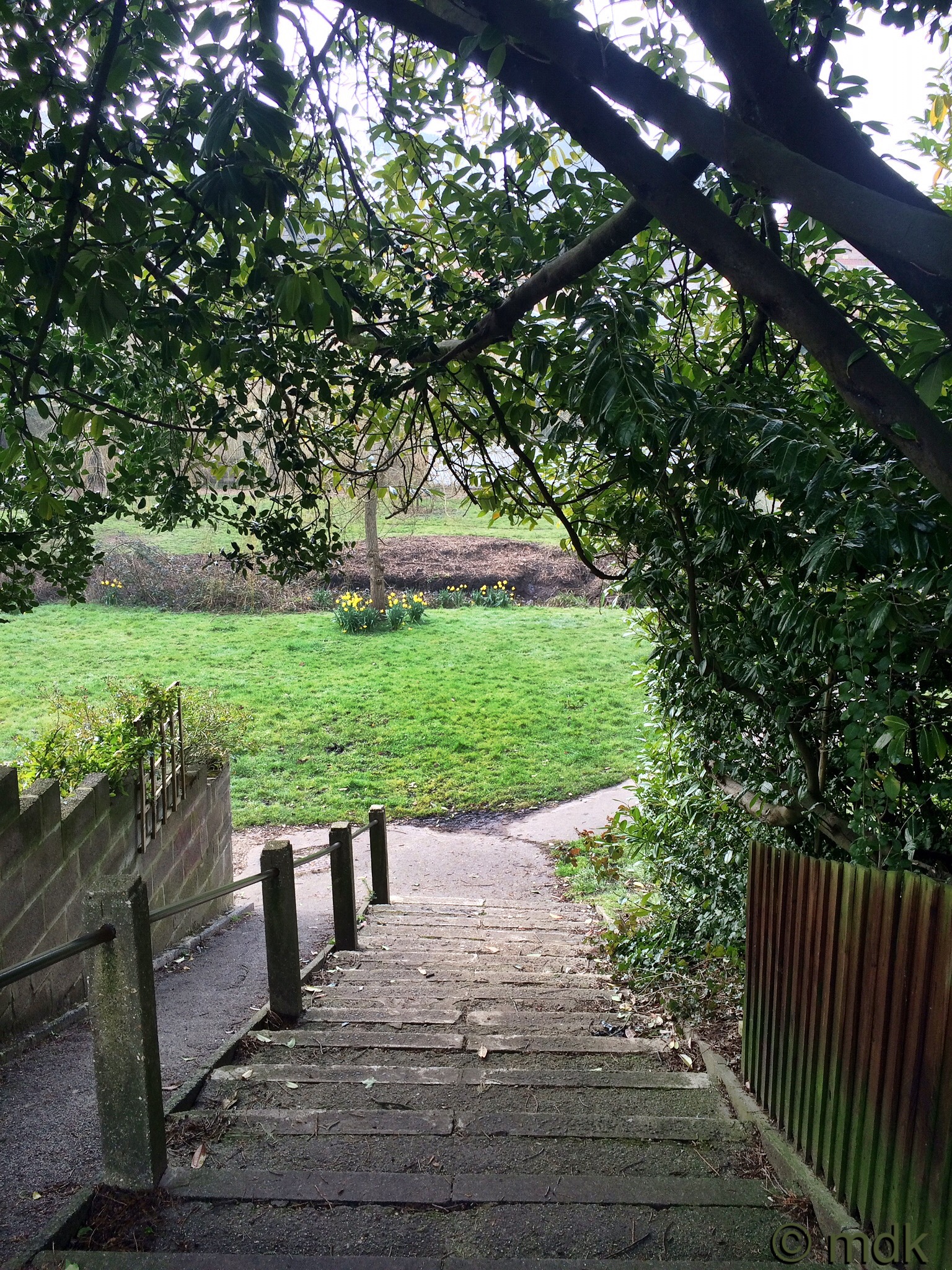 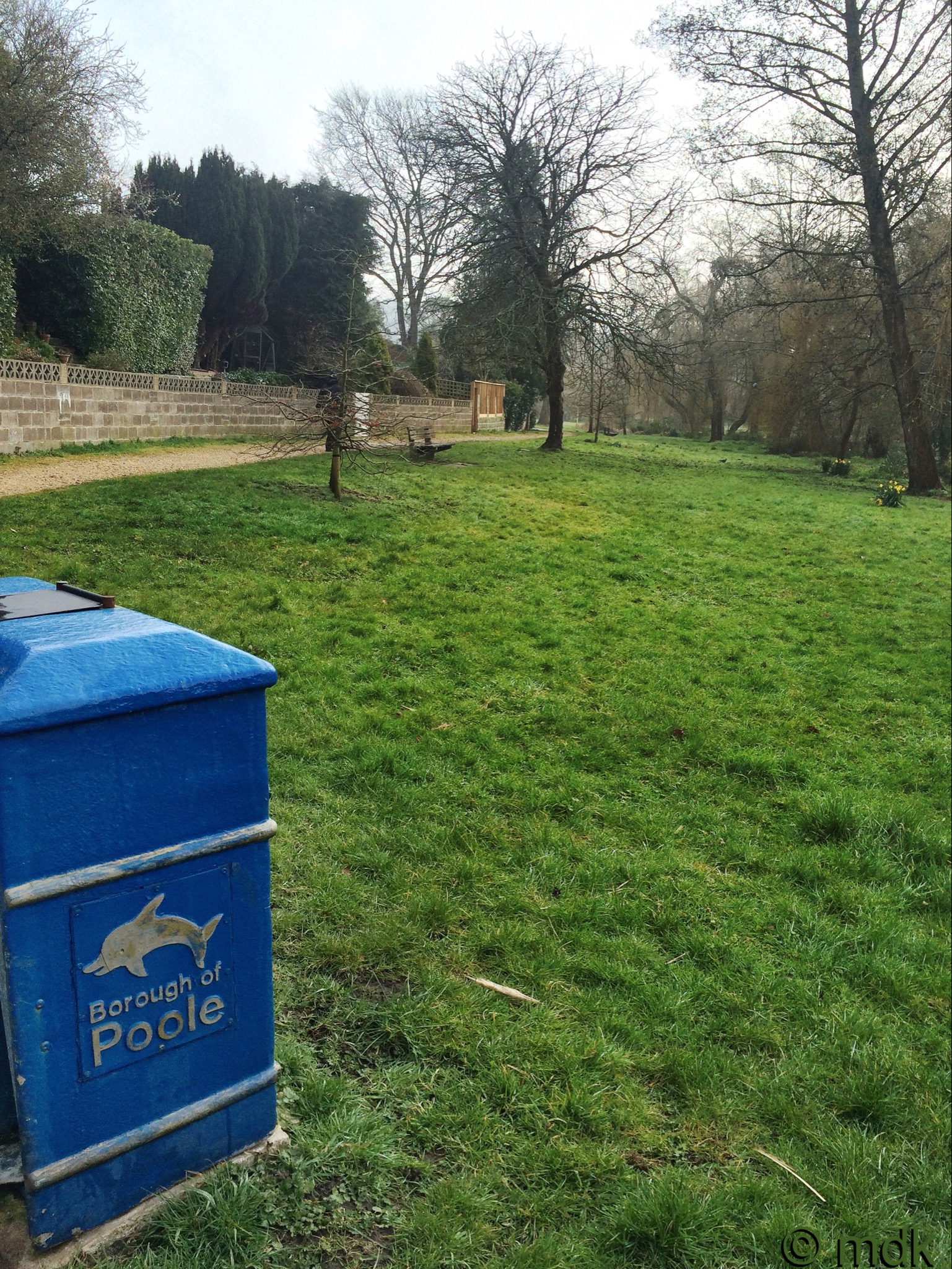 This park is the upper segment of a line of conjoined gardens that run all the way to Bournemouth sea front. In 1940 it was turned into allotments as part of the war effort. It wasn’t until 1951 that it became part of the pleasure gardens but, until very recently, it was in a fairly sorry state, especially at the top end where the stream enters through a culvert by the railway embankment. The culvert was unsightly with steep sided concrete blocks lining the stream and drainage was poor. In 2002 improvements were made. The concrete channeling was removed, the stream was widened and the banks lowered. Now it meanders through the park and the grass acts as a mini water meadow. Near the culvert a wooden footbridge was built. We stood on it and watched the stream burbling along for a moment or two. 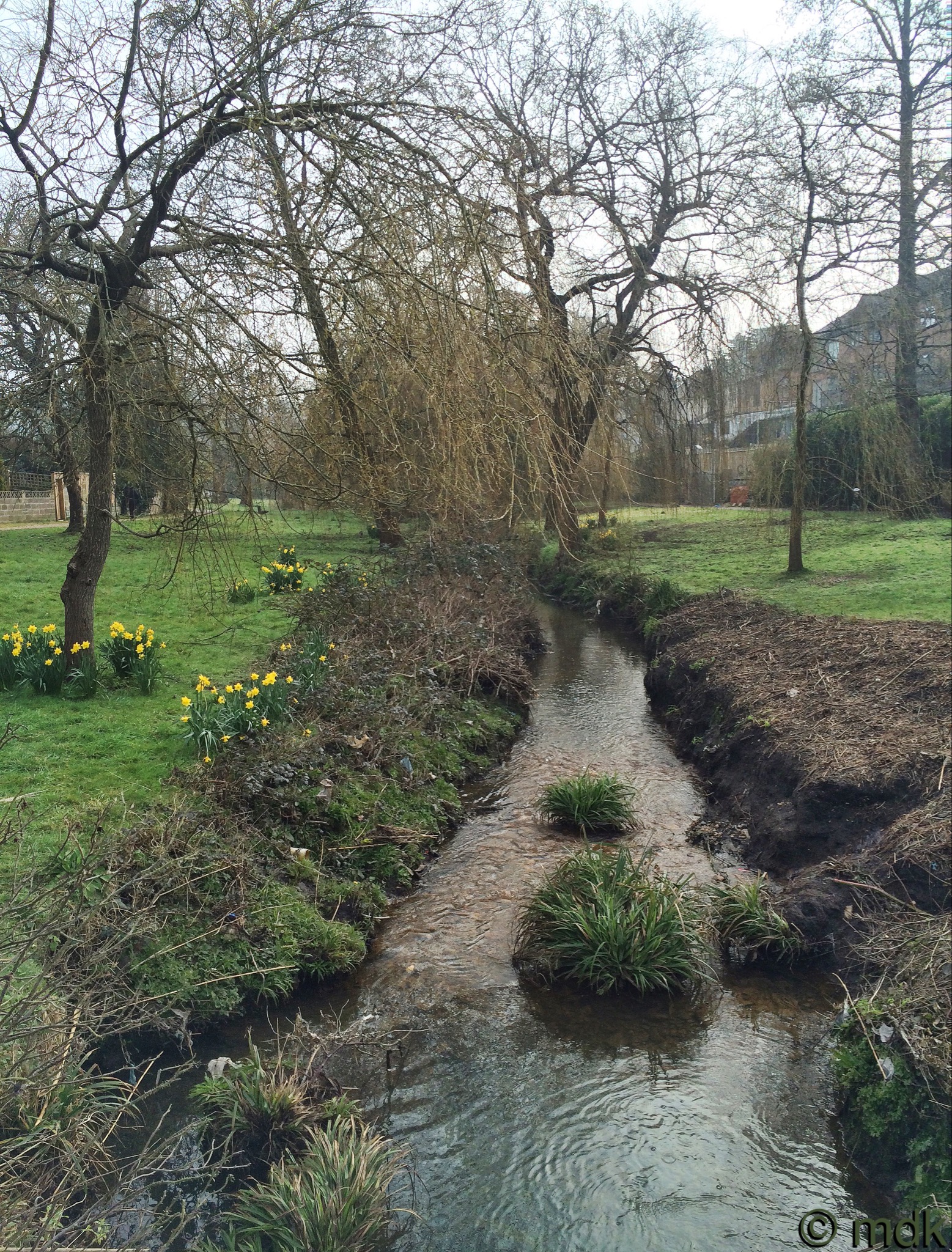 Leaving the bridge behind we wandered along the path looking for the Coy Pond. Neither of us really knew what to expect and, when we came to a large sunken area in the grass filled with water, I looked at CJ and said, “if that’s the Coy Pond it has been serioisly oversold.” Luckily it wasn’t. A few moments later we rounded a bend and came upon the real Coy Pond. It was actually outside the park running at right angles to the bend in the stream. 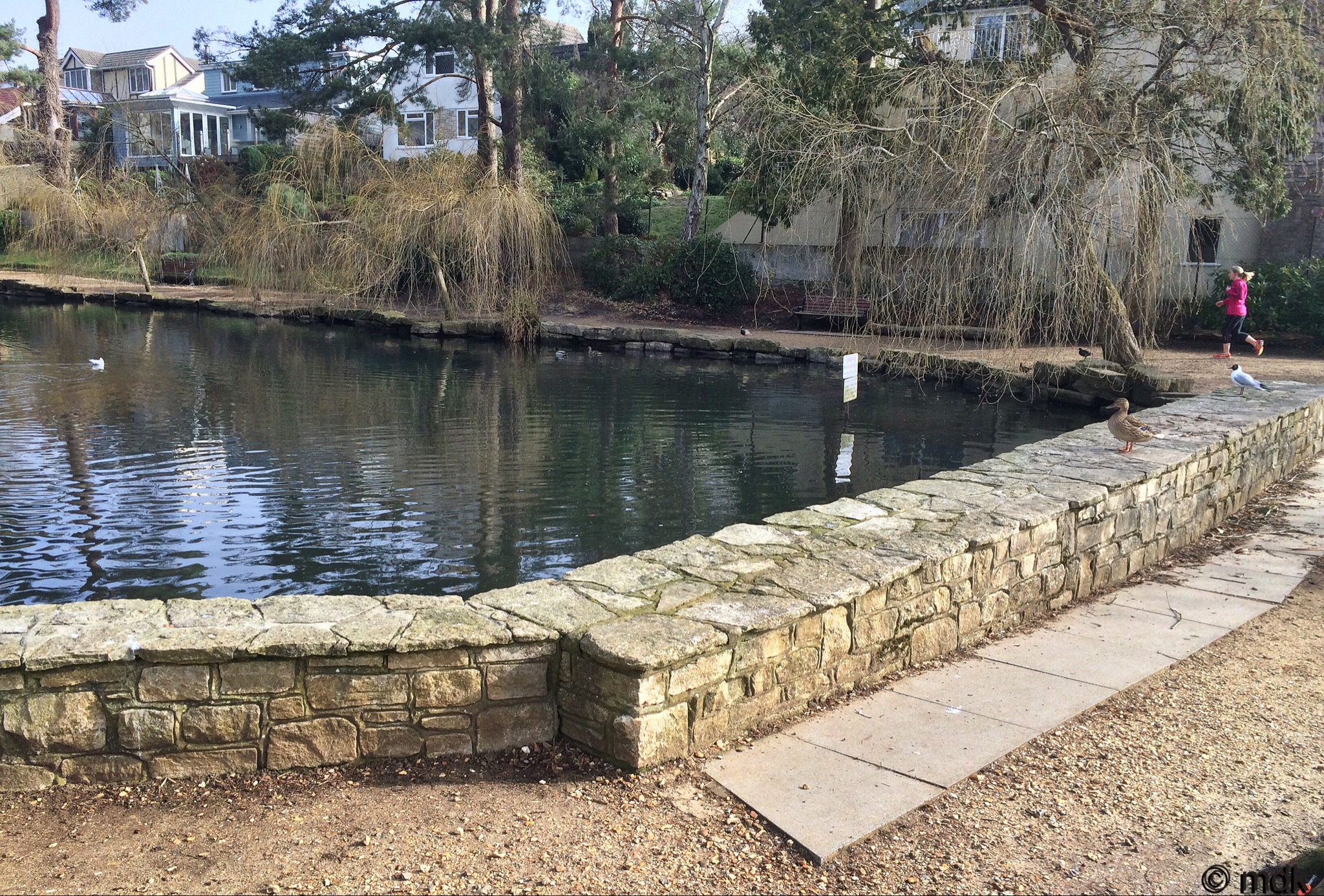 Like the park, it wasn’t quite what I’d expected. For a start it was more or less rectangular, surrounded by houses on three sides and a road on the fourth. As far as I could see there were no coy in it either. A large, tree filled island added an air of wildness it might otherwise have lacked though and a few ducks and gulls were swimming about happily. 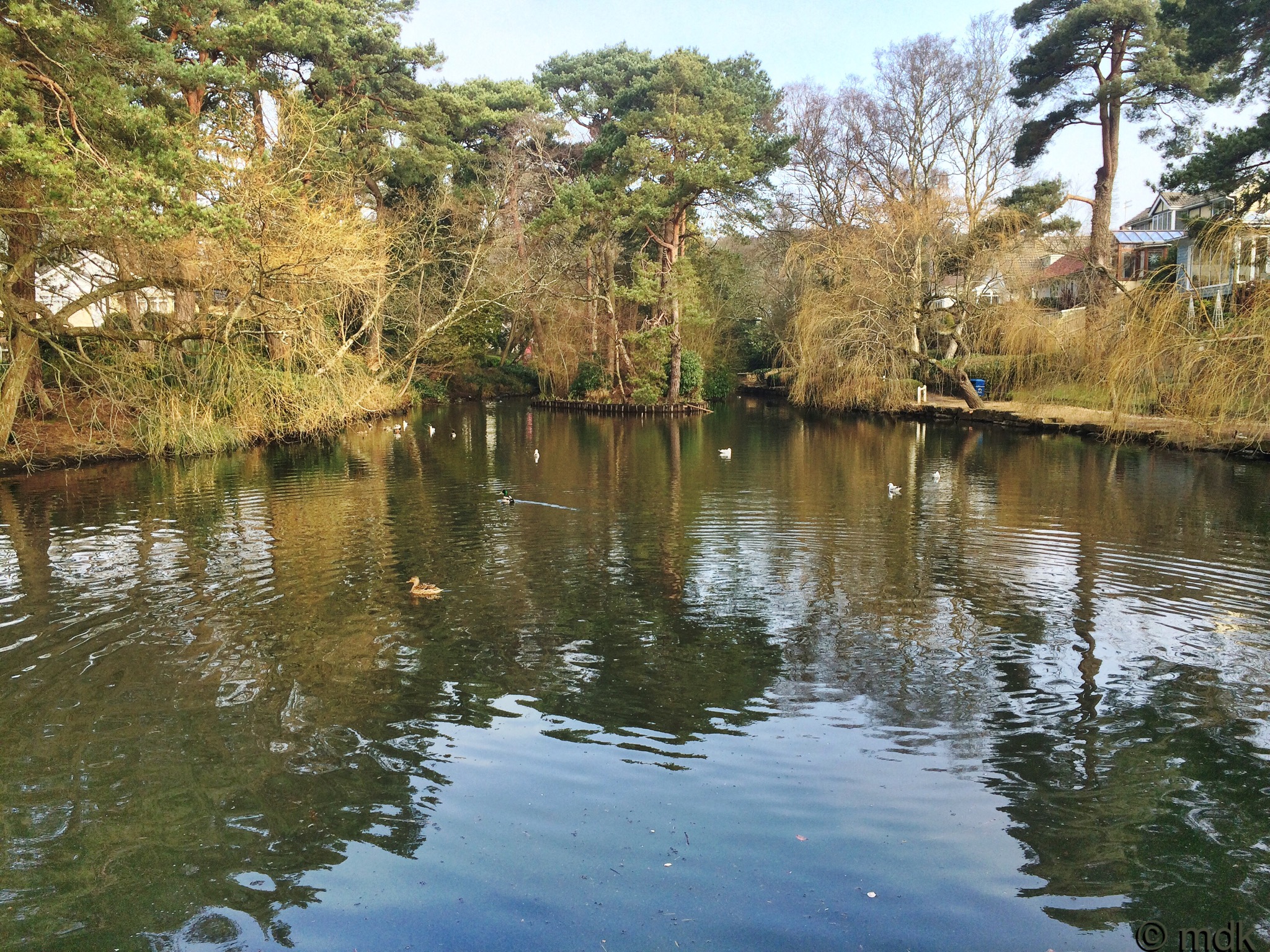 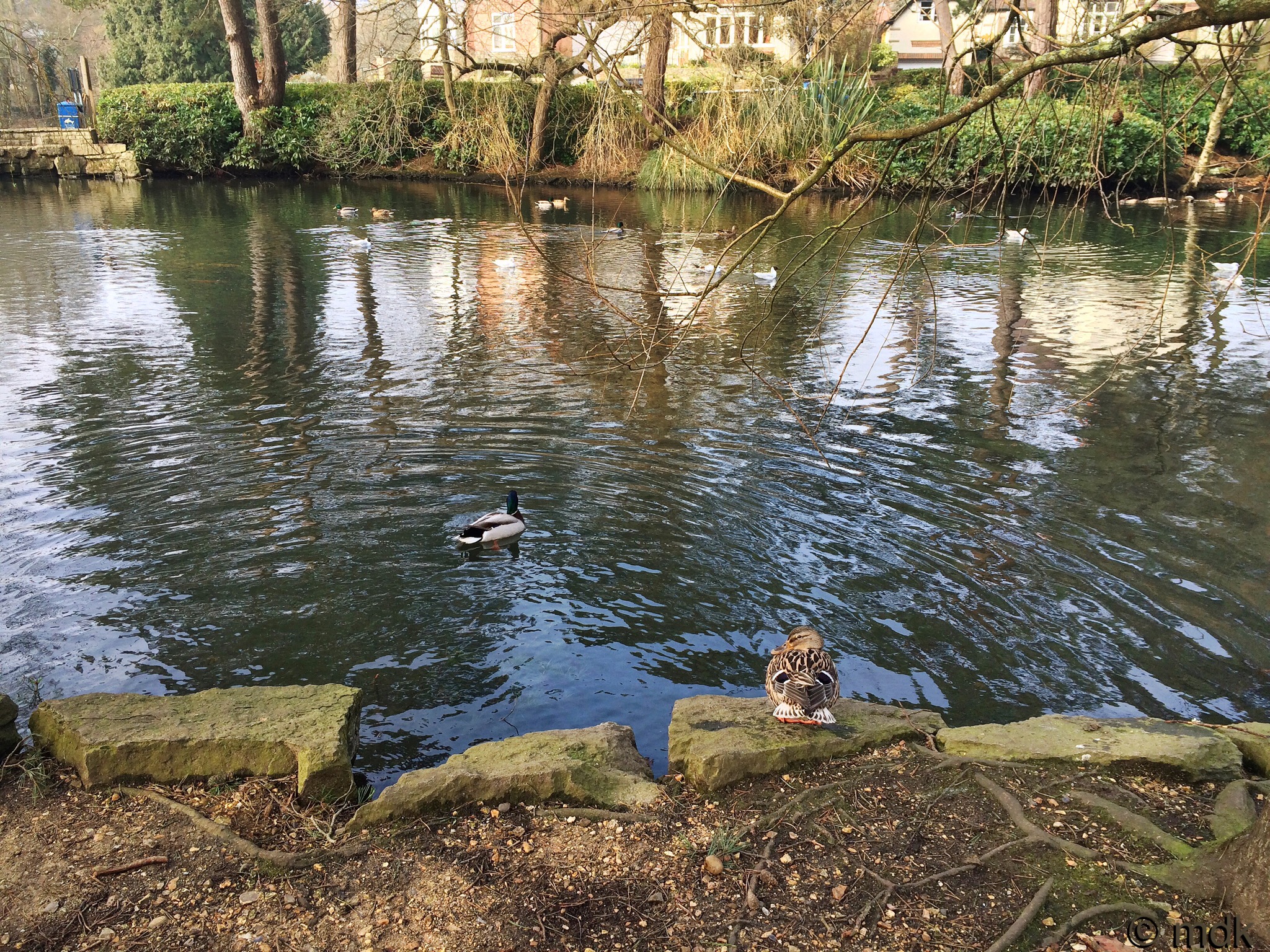 Coy Pond began life as a decoy pond where wild birds were lured and caught but, in 1888 when the railway embankment was built, it was transformed into its present form. The waterfowl have never left though and the wooded island is home to coots, moorhens and Canada Geese along with the mallards we saw. Despite the miles ahead of us, we decided to walk around the perimeter and discovered it was longer than we’d expected and, at the far end, had a curious wier like feature a little like a brick maze. This, it turns out, is the inlet and the slalom of brick walls creates a turbulent flow of water to aerate the pond. 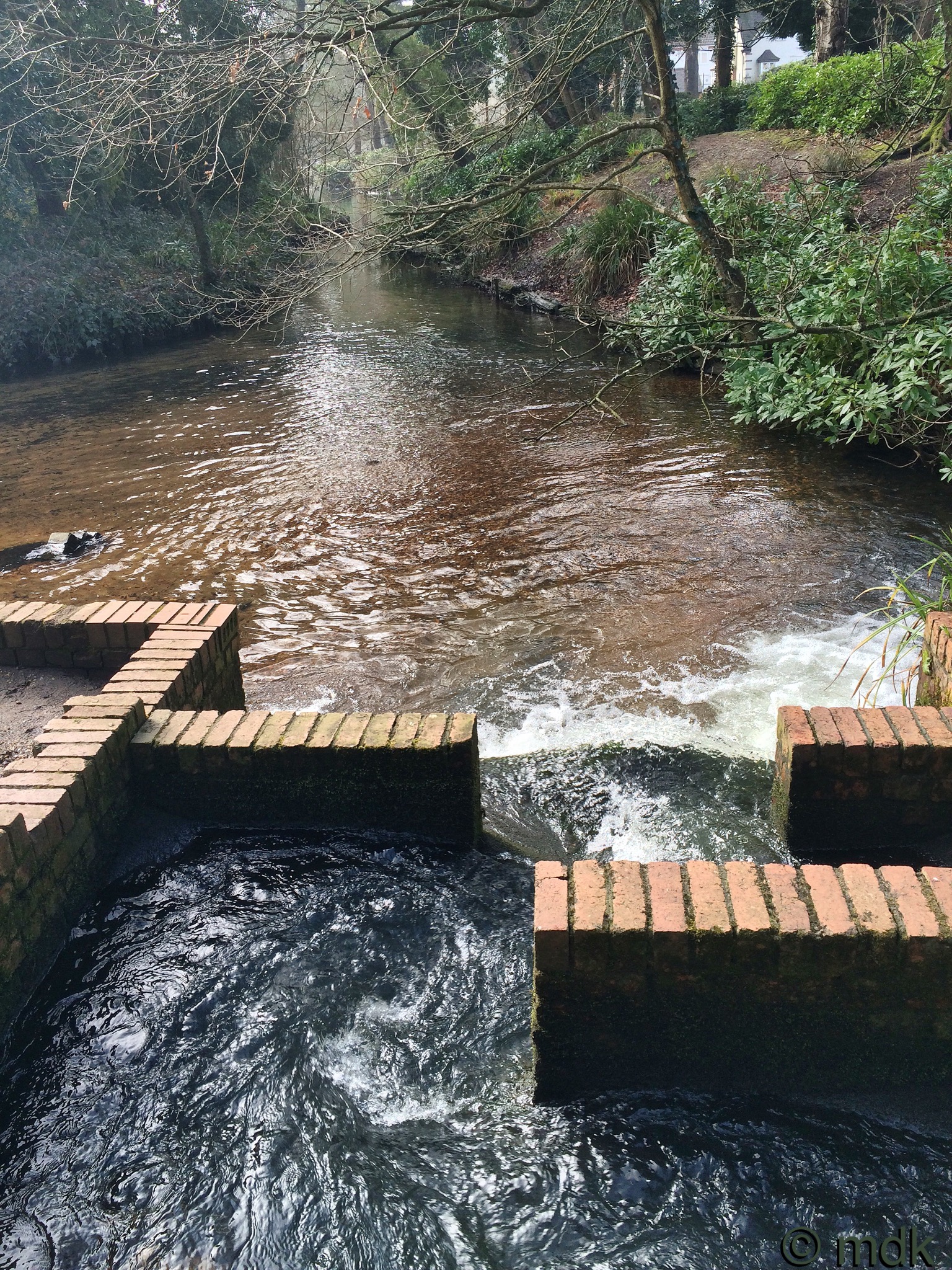 The water comes from the Bourne. As it flows down from Talbot Heath it is culverted under the railway embankment and appears to divide with one branch feeding the stream we’d seen flowing through the park and the other feeding the pond. We walked back to the other end where an outfall pipe takes the water under the road back to the Bourne. Before we left, the pond had one more surprise for us. A mother duck was proudly gathering nine fluffy ducklings around her, the first I’ve seen this year. Sadly, we hadn’t brought our duck food so we couldn’t lure them close enough for clear photos. 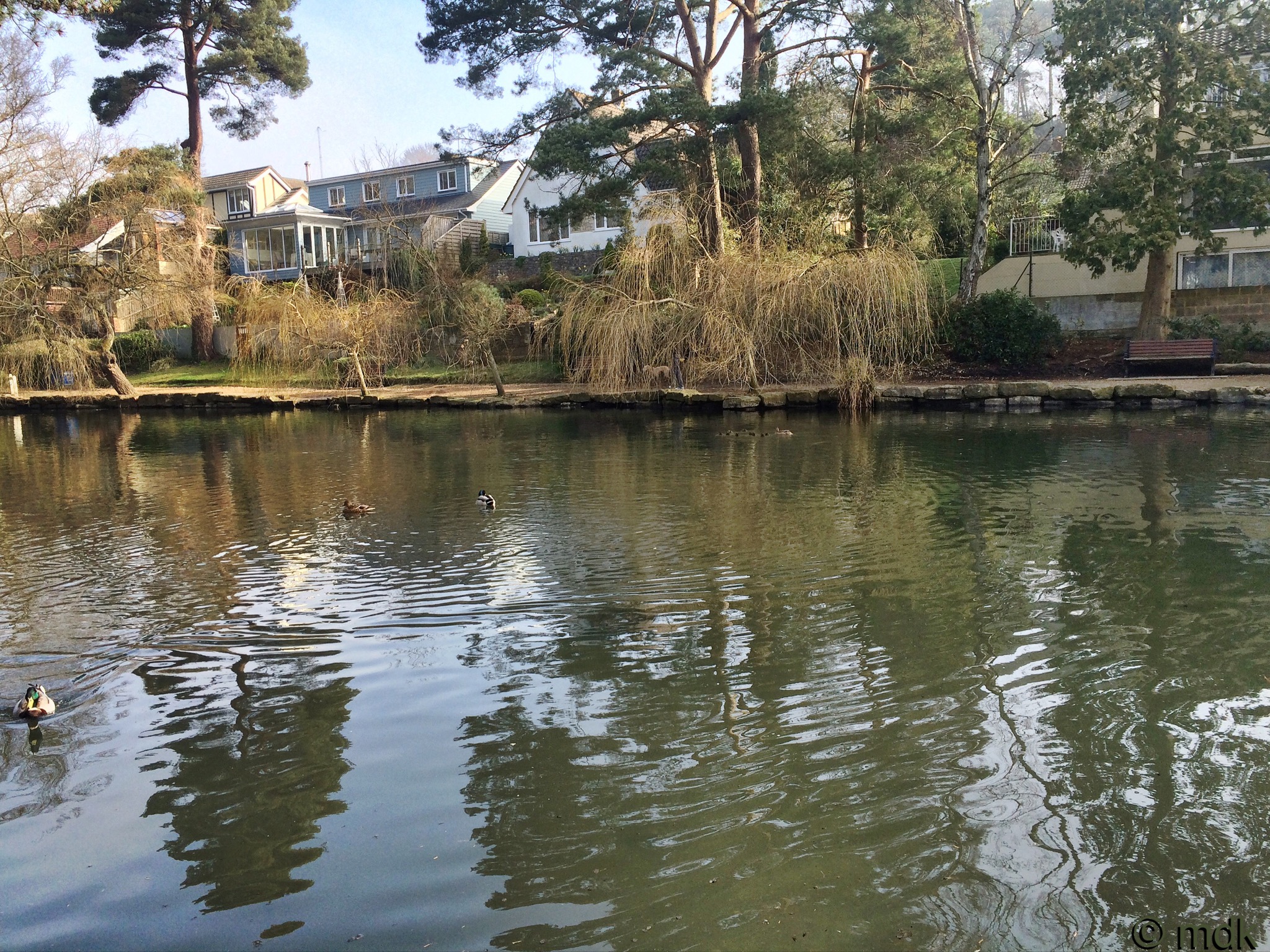 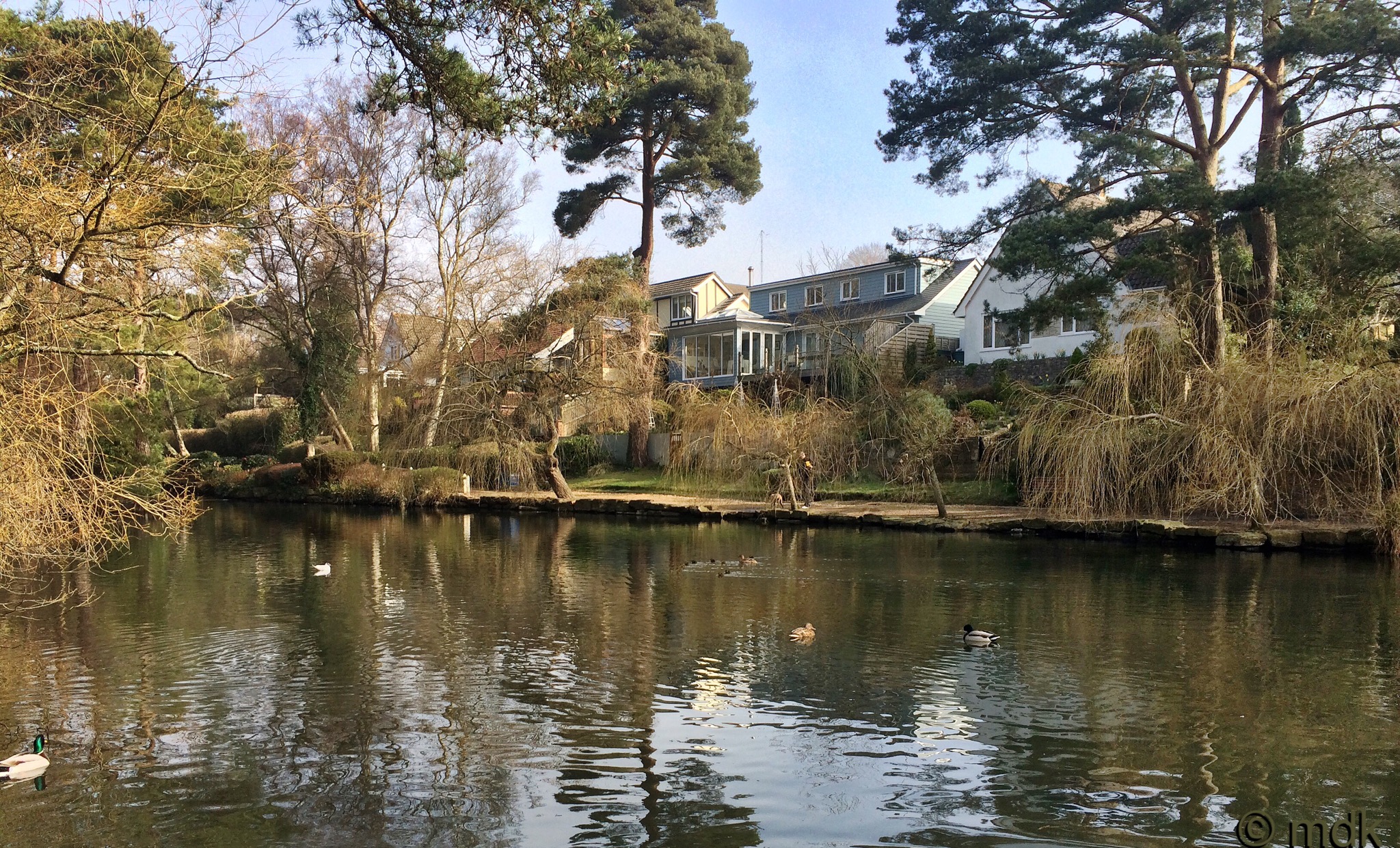 Soon we reached Branksom Wood Road. The water flowed under and we followed it across the road to the next park, Upper Gardens. This park seemed wider, as did the river. Ahead the mist was still clinging to the trees and we could see an oriental style bridge. 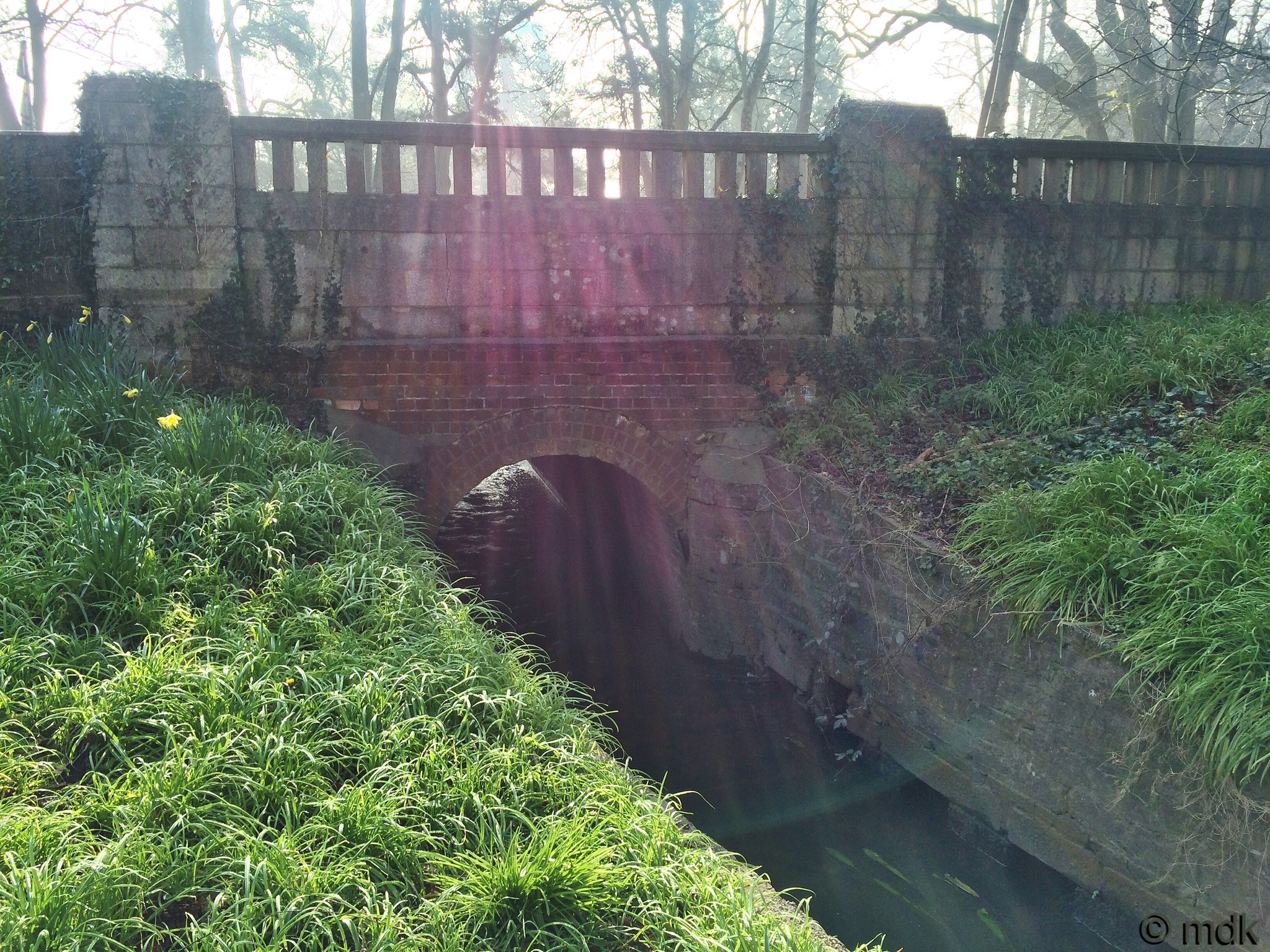 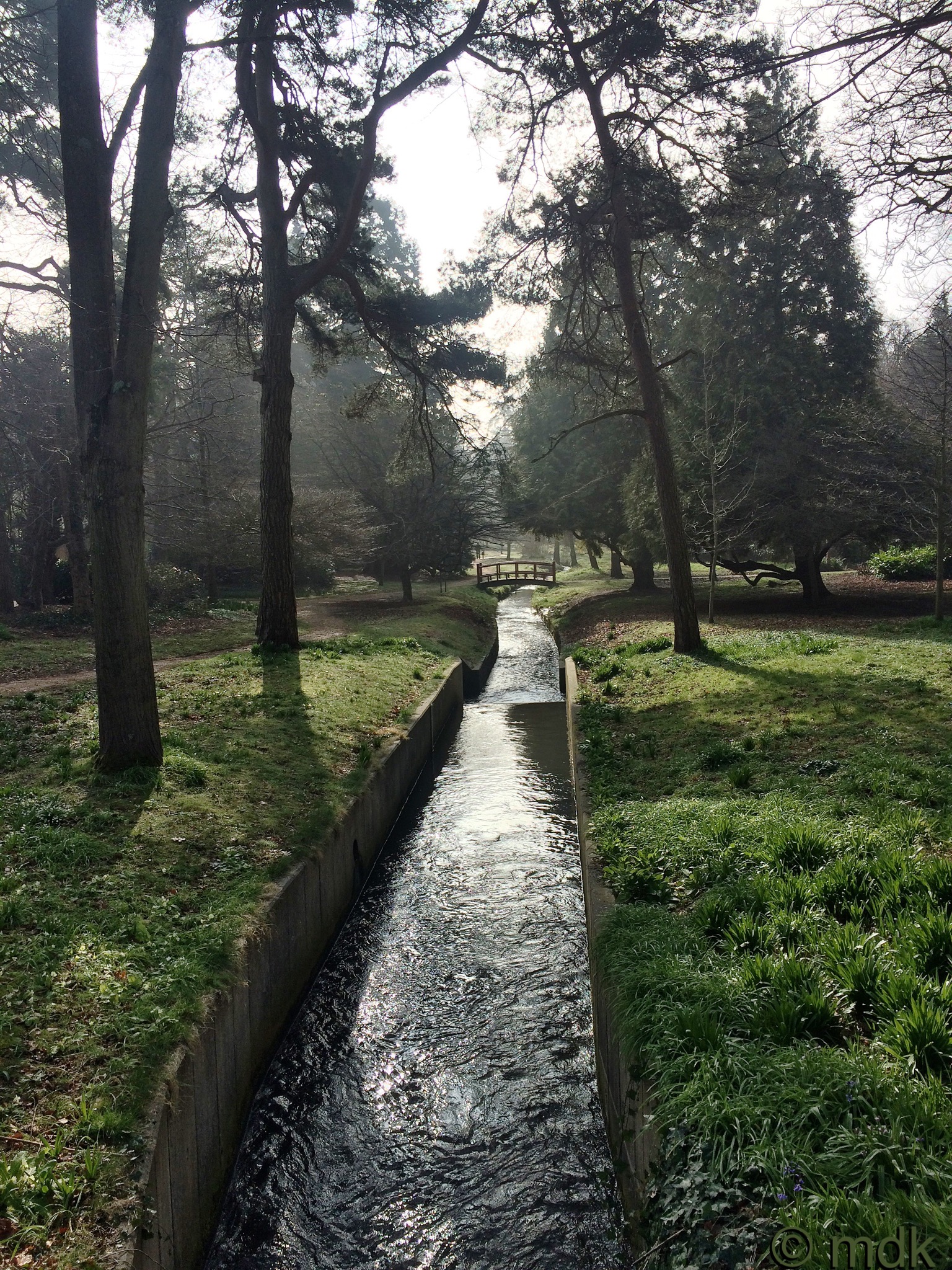 On closer inspection the little red bridge was pretty but not nearly as impressive as the redwood tree nearby. It towered into the sky and made us feel like tiny, inconsequential dots. Somewhere in this park Poole would imperceptibly become Bournemouth but where exactly we had no idea. To our left I knew the roads were in Bournemouth and, to our right in Poole and it felt as if we were in nomansland between the two. 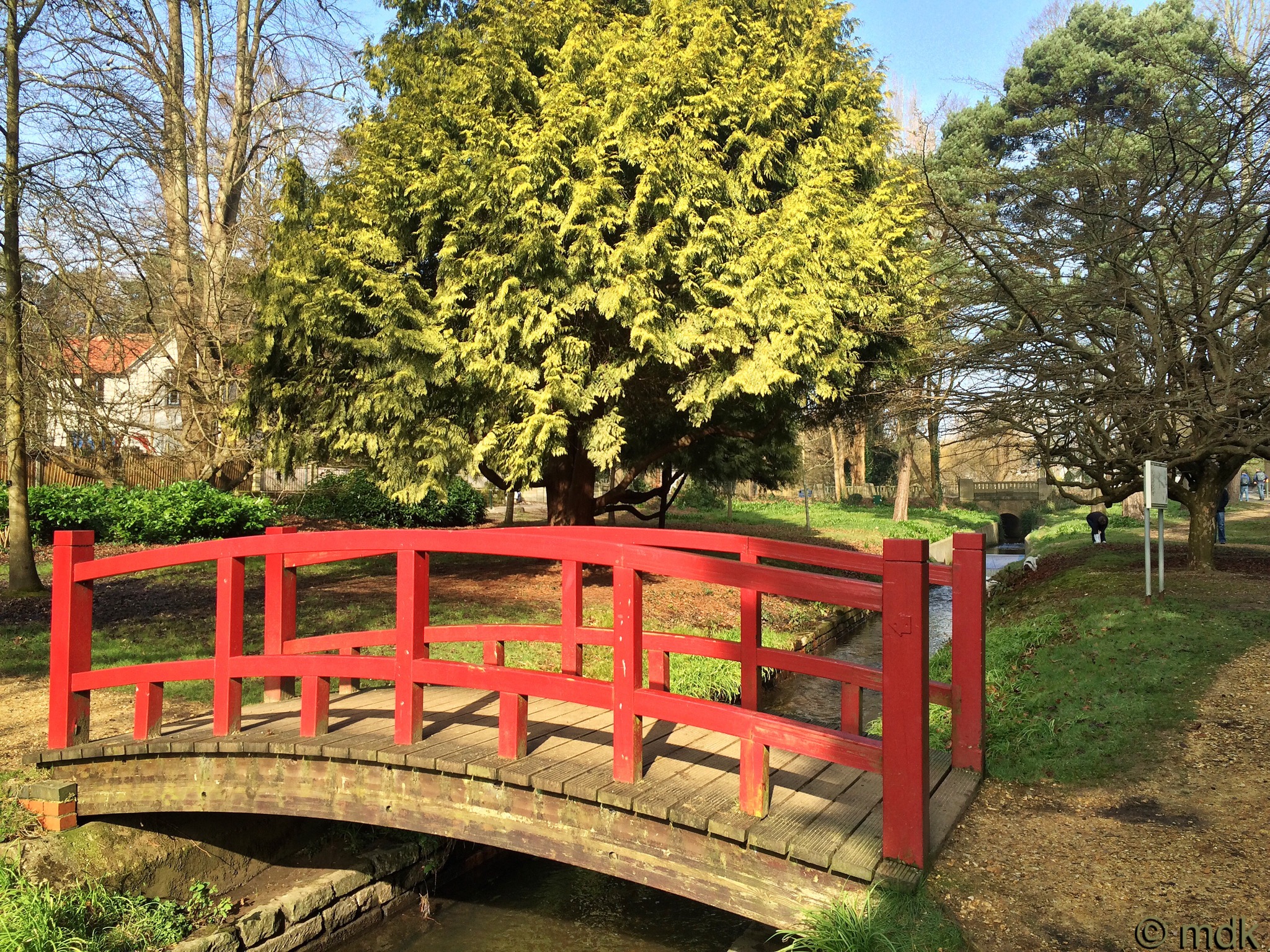 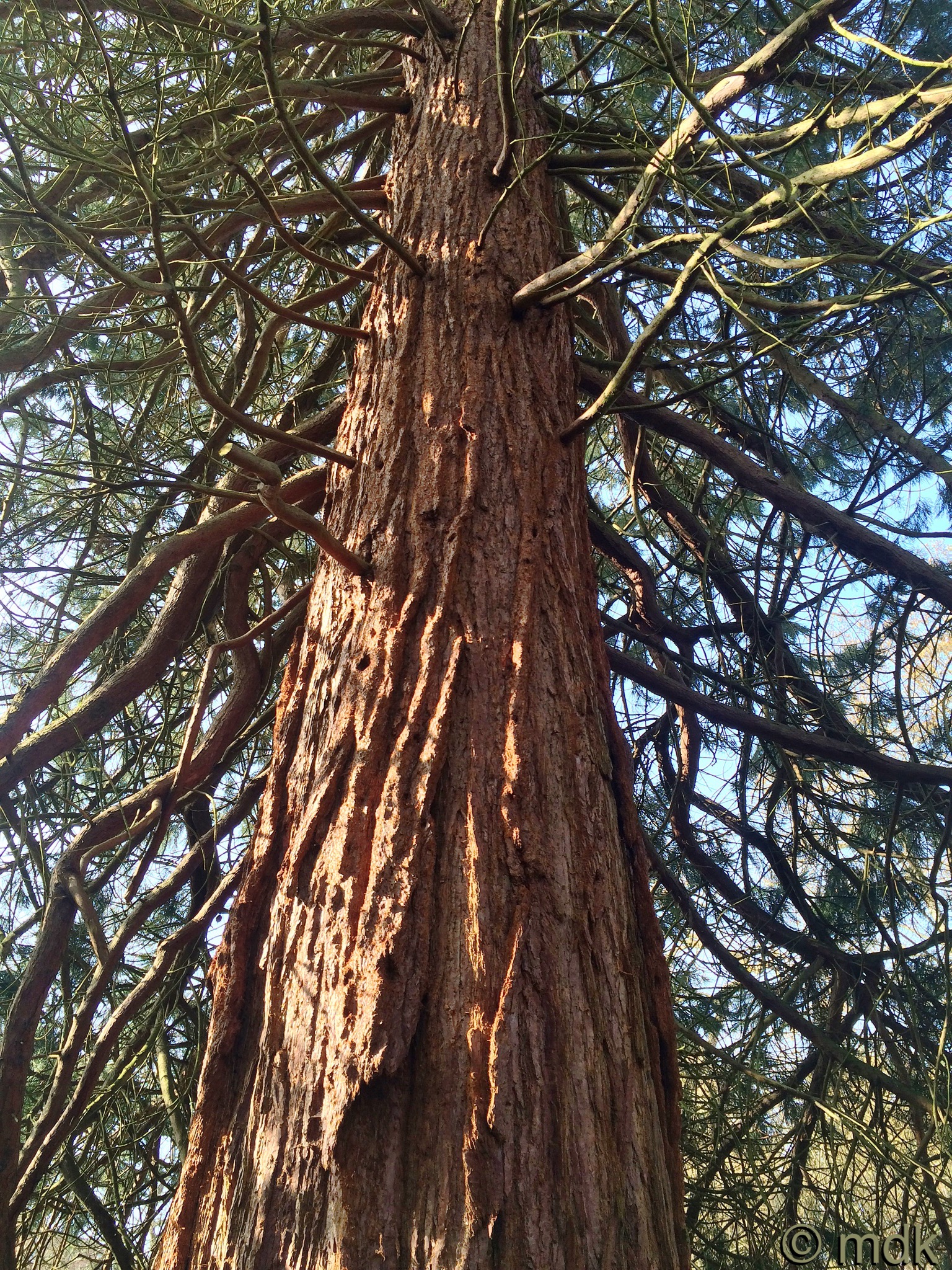 So we followed the winding path through the park no quite knowing which town we were in.
“You’d think there be a line or a boundary stone somewhere telling us when we crossed the border,” CJ said.
Maybe there was but we didn’t see it. Neither did we see the ghosts that are said to haunt these gardens. Many people have reported seeing four figures in long black cloaks wearing wide brimmed hats standing diagonally across the gardens. No one knows The story behind them. We did find a boardwalk snaking across the boggy grass and with the eerie mist still clinging to the trees it felt like it could have been a haunted place. 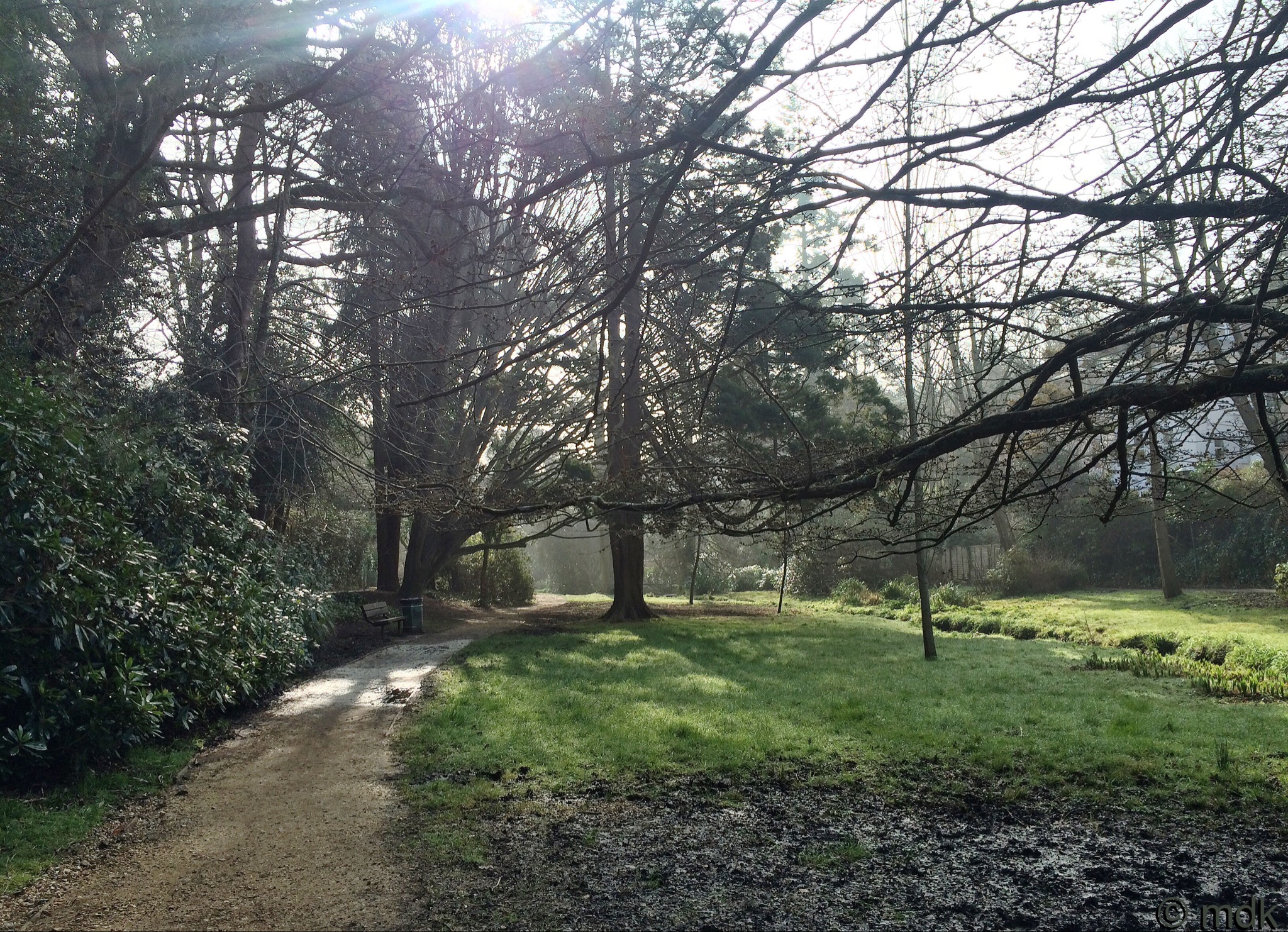 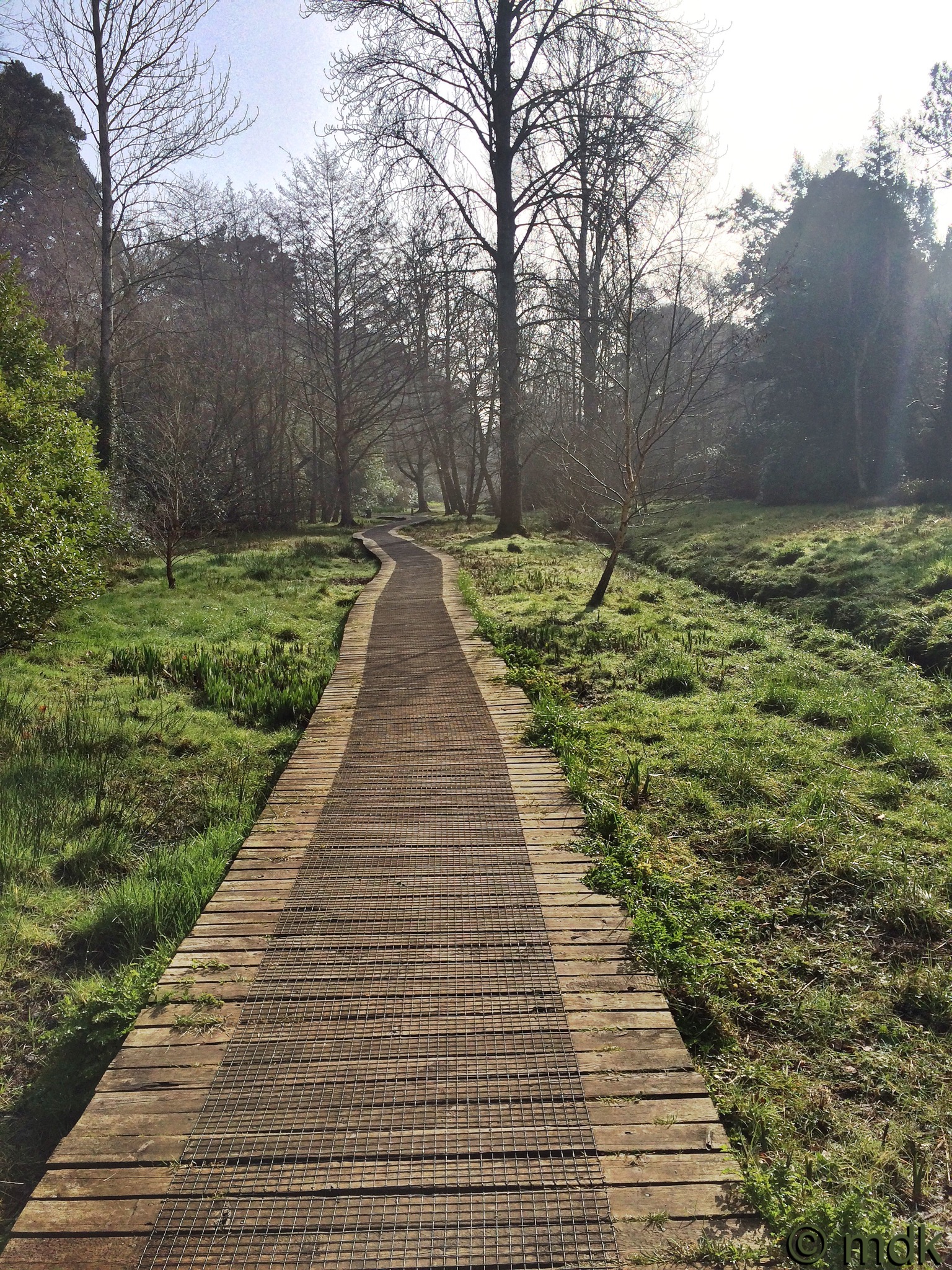 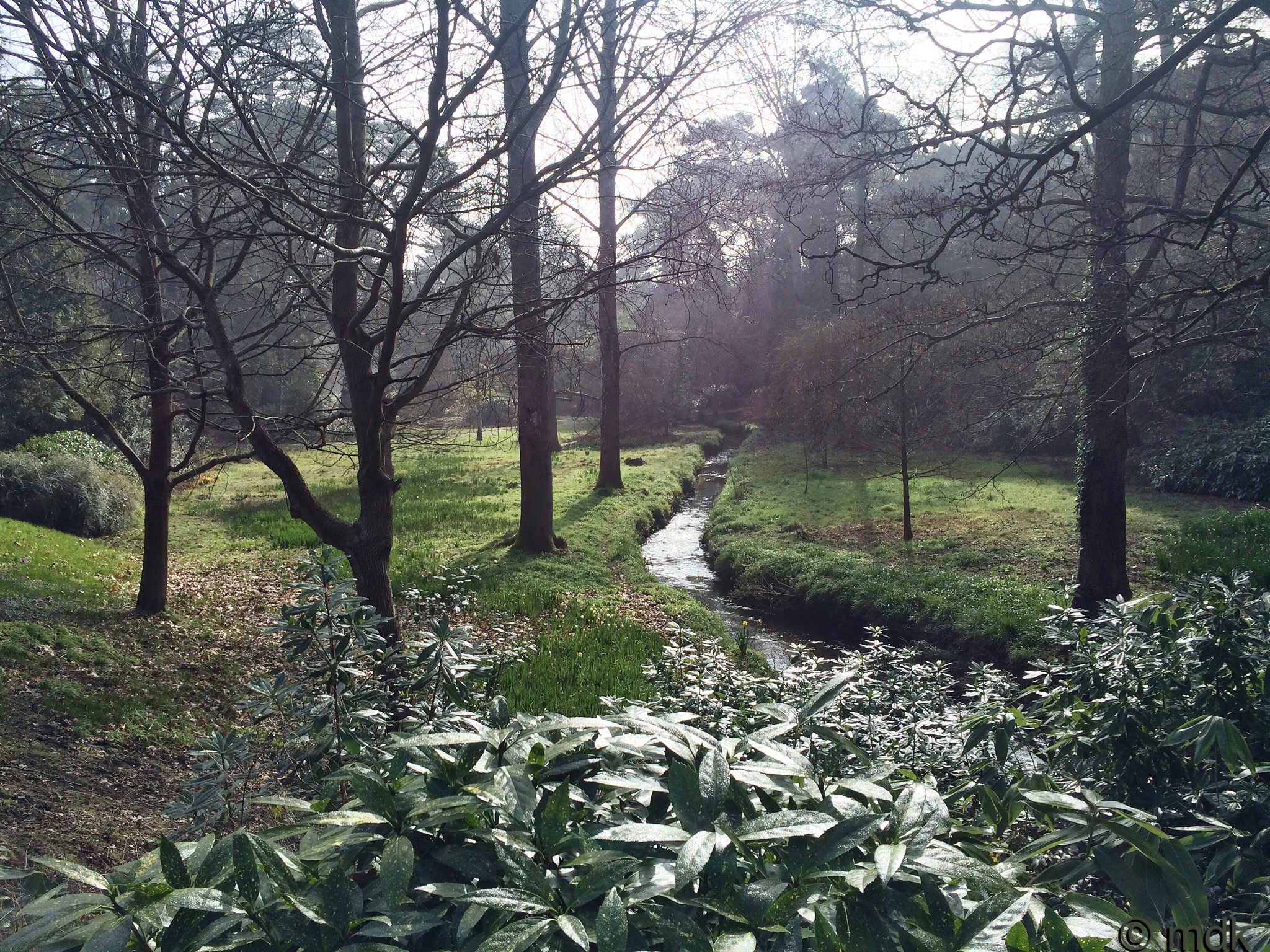