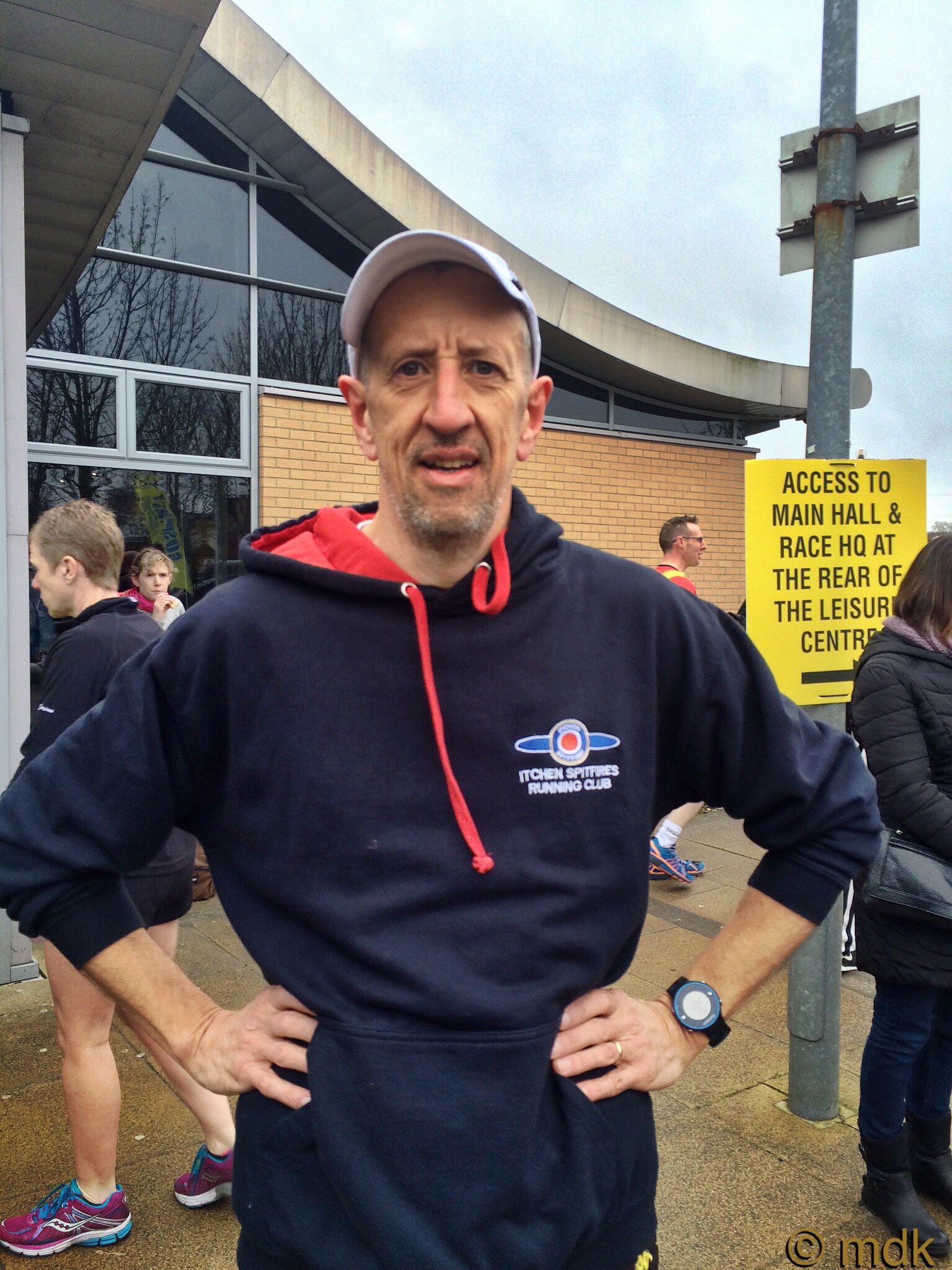 Commando’s first ever race was the Eastleigh 10k back in 2012. Today he was acting as 55 minute pacer, a bit slower than he’d have liked but a nice easy run for him. Of course I went along and not just to have a look at the special pacer’s dressing room or get a Costa either. Obviously there’d be no chance for a great deal of walking or exploring but I did enough of that yesterday and races are always fun to watch.

The pacer’s changing room turned out to be an office in the Fleming Park Leisure Centre but it was more private than the main hall and most of the pacers already knew each other. A certain Olympic 400 metre runner and silver medalist sneaked in to take advantage of the semi privacy too but no one minded. In fact I think Commando was watching his warm up routine to see if he could pick up any tips. Also he can now name drop and say he shared a changing room with Iwan Thomas. 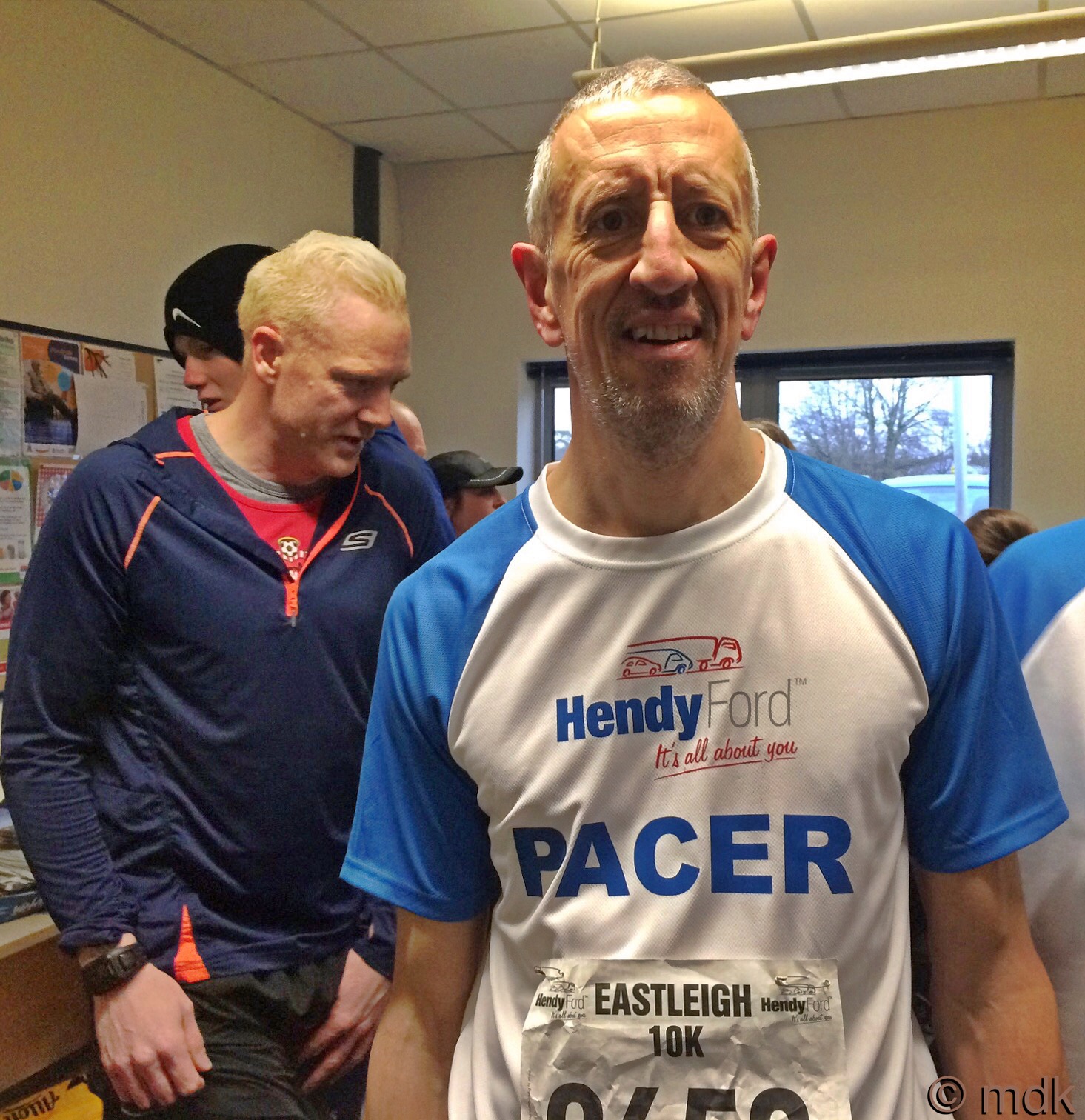 After a fair bit of chit chat and a rather overpowering smell of wintergreen, everyone went out into the chilly and slightly overcast Eastleigh morning for a quick photo shoot before the race. Obviously I was not the official photographer (an iPhone camera is not official photographer gear) but I thought I go along anyway. The photo was being taken a couple of hundred yards away on the course. As they all inconsederatly ran off rather than walking like sensible people, I got there after the action was over. I did get a photo but it was of everyone chatting rather than lined up looking smart. I have included the official photo to show the difference. Note that Olympic guy managed to photo bomb the event! 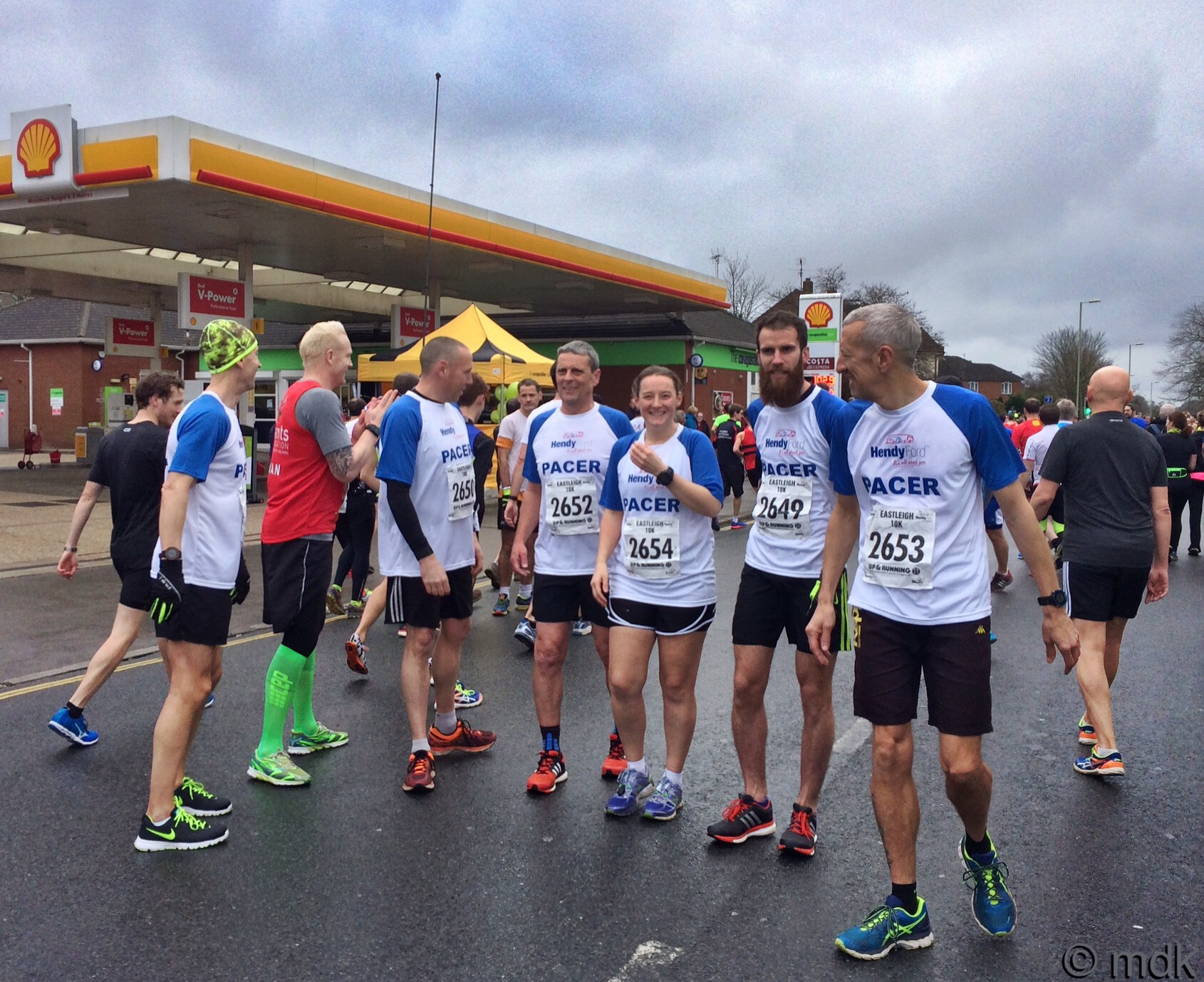 A quick peck on the cheek from Commando and they were off to the start line, running again. You’d think a six mile race would be more than enough running for ome day but they’re all totally obsessed and seem to need to run everywhere at all times. For a moment or two I dithered, wondering whether to walk down to the start pens to try to get a photo or walk the other way and try to find a vantage point to see the start. Going on past experience of trying to find a familiar face in a crowd of around three thousand, I decided on the latter. Besides, I’d be heading towards the Costa and the nearer I was to it the less crowded it would be when I got there. 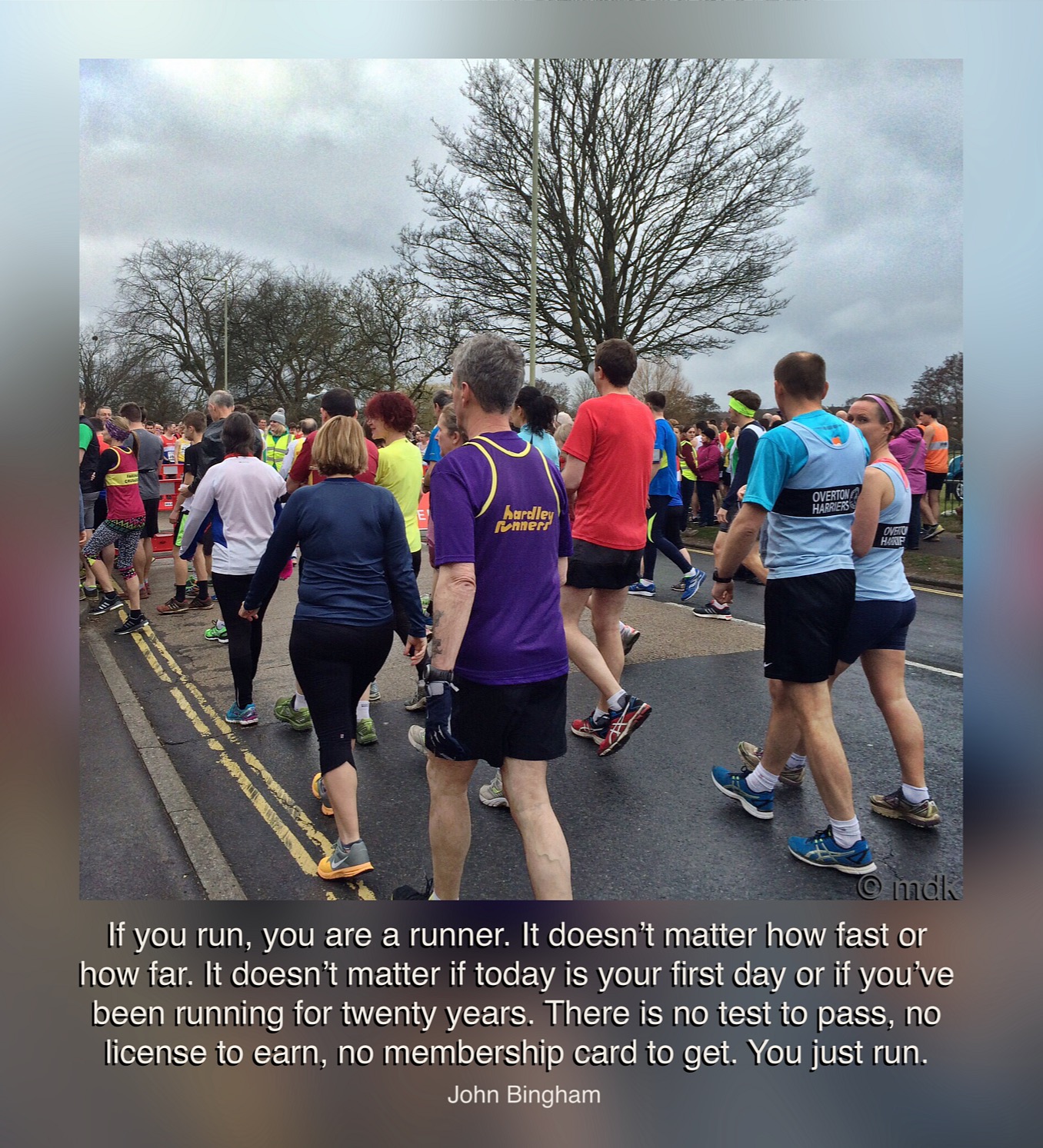 Race time was fast approaching so I was walking against a tide of runners making their way to the start line. In fact, as I got closer to the leisure centre entrance there was a last call announcement over the tannoy. A rather swish red car, followed by the pace car with a huge stop watch on the top set at zero came crawling towards me. A few people who’d been slowly ambling along the pavement suddenly started running. 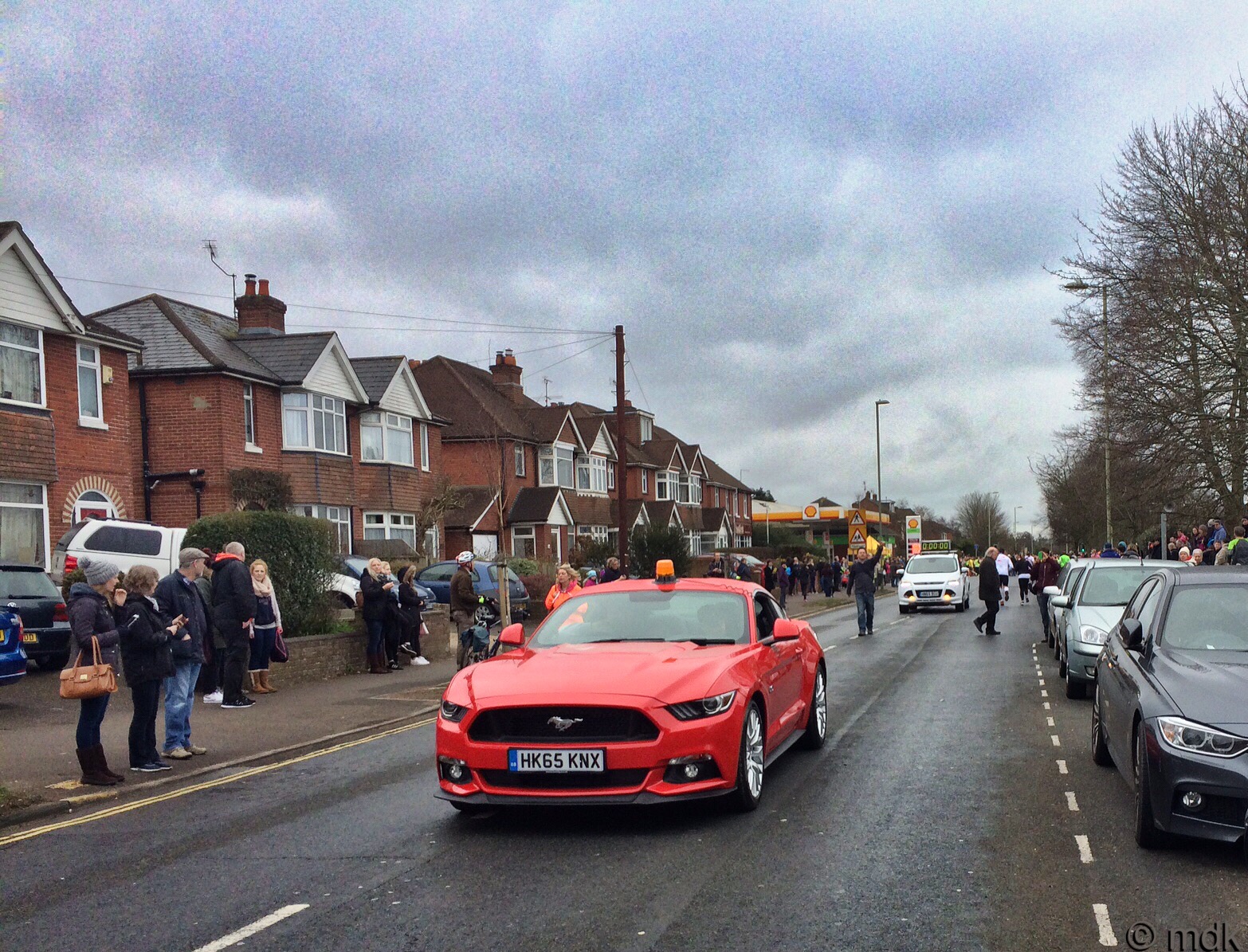 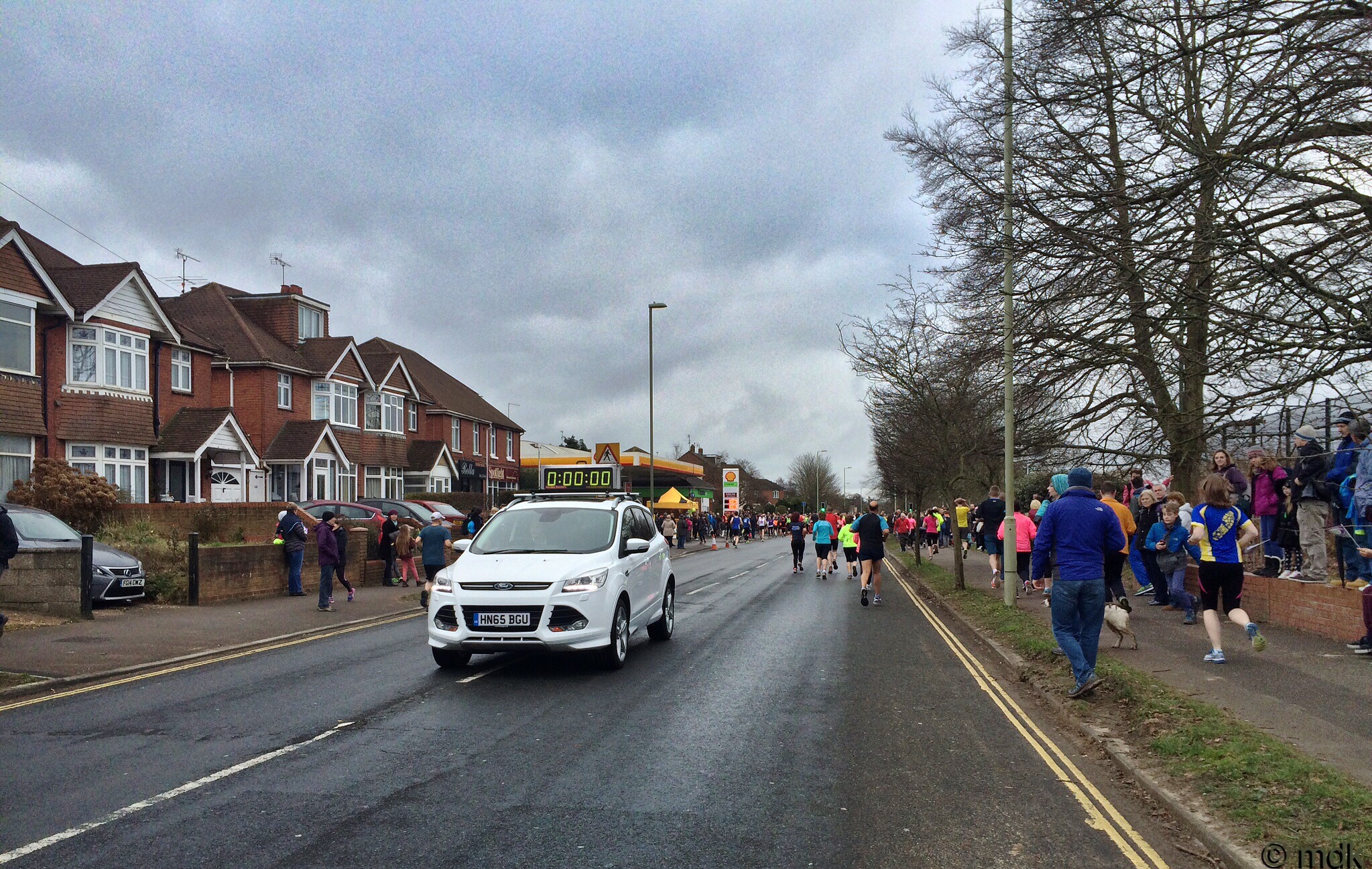 The road was lined with spectators but I found a half decent vantage point. A few moments later the Pace car passed me again. Now the stop watch was ticking. The race had begun. Seconds later runners began to pass me. A few action shots were taken but I knew it was futile to try to spot Commando amongst the crowd. Running at fifty five minutes he’d be quite far back and I knew if I waited too long I’d have no hope of getting a coffee. 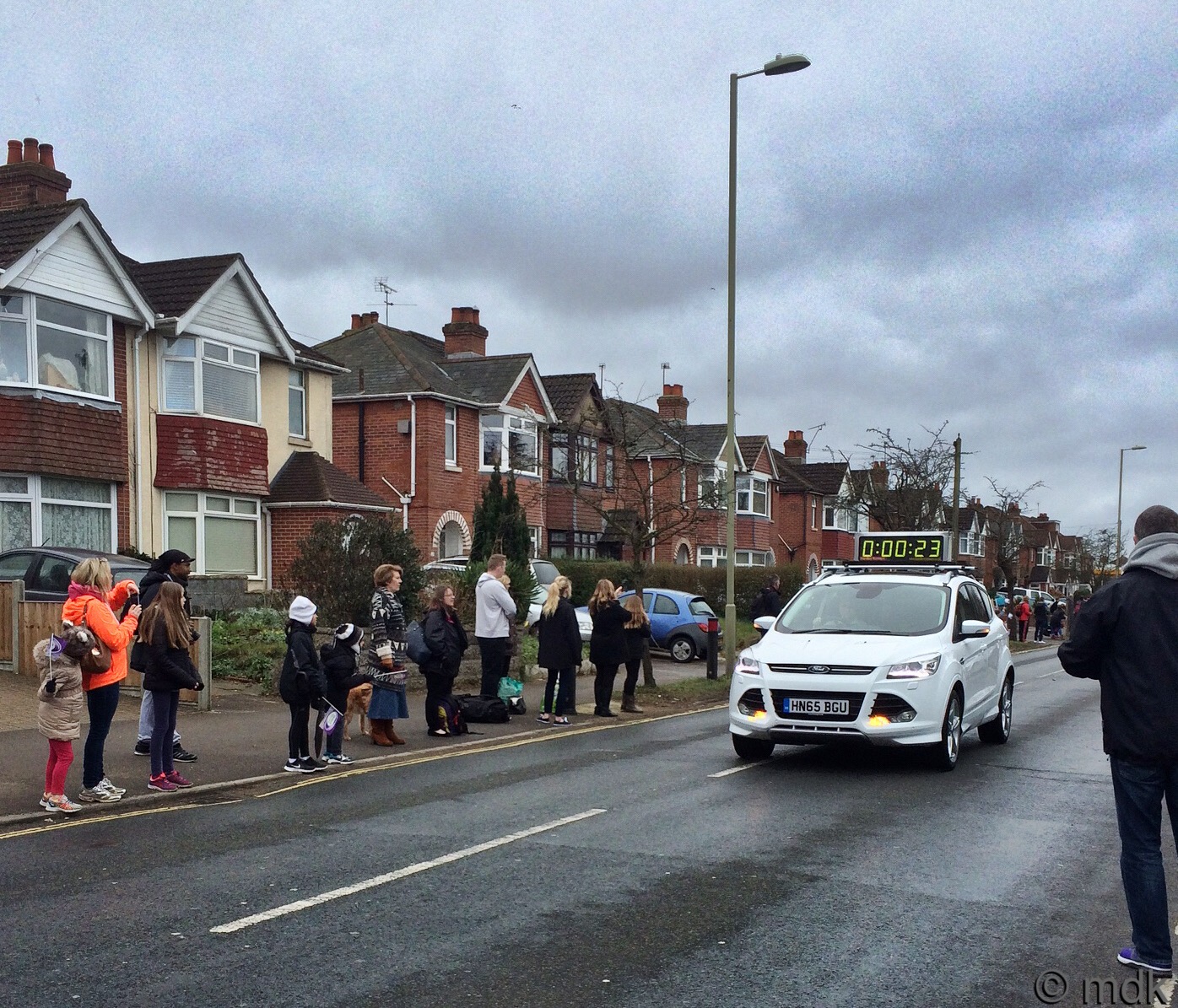 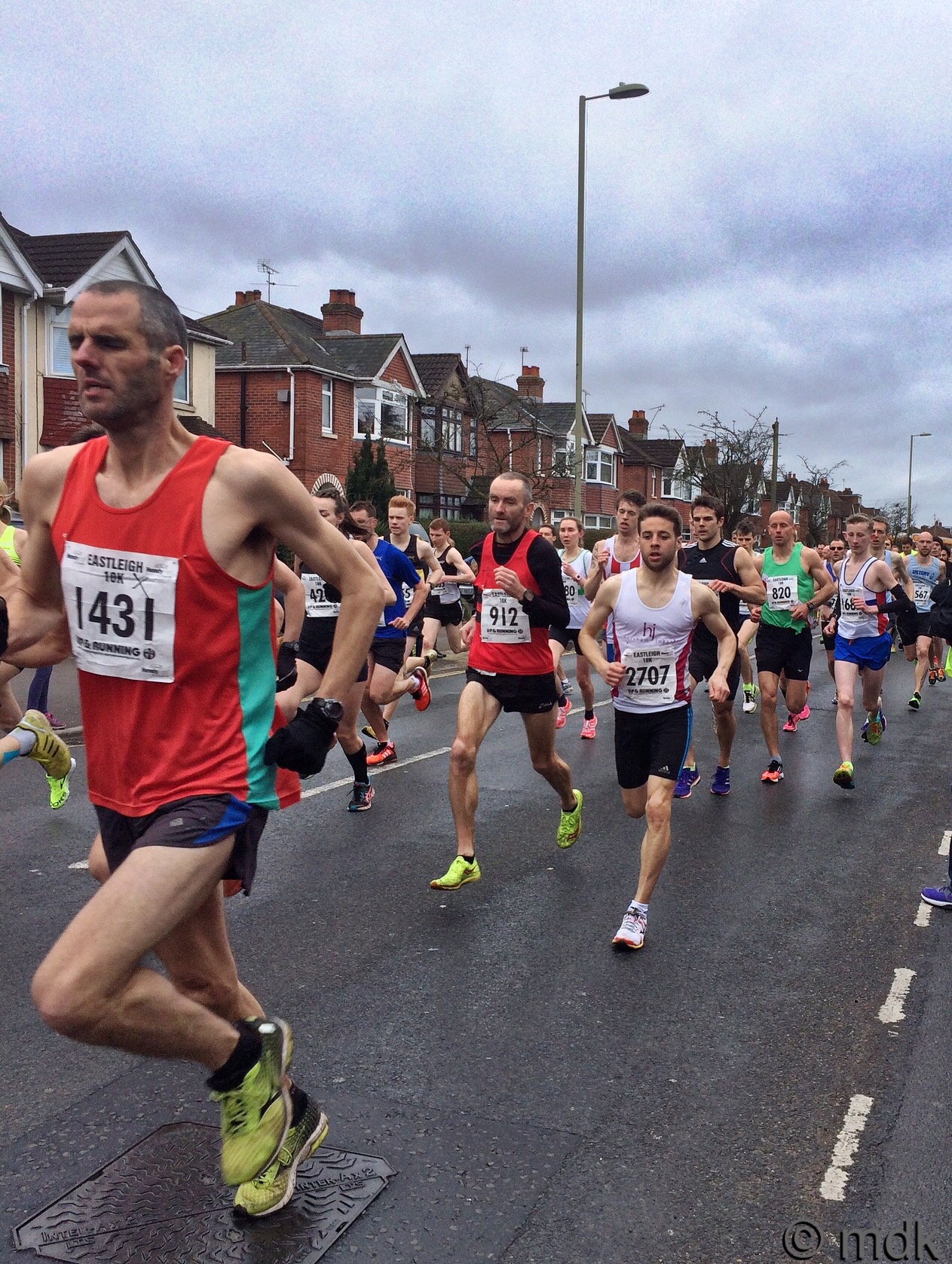 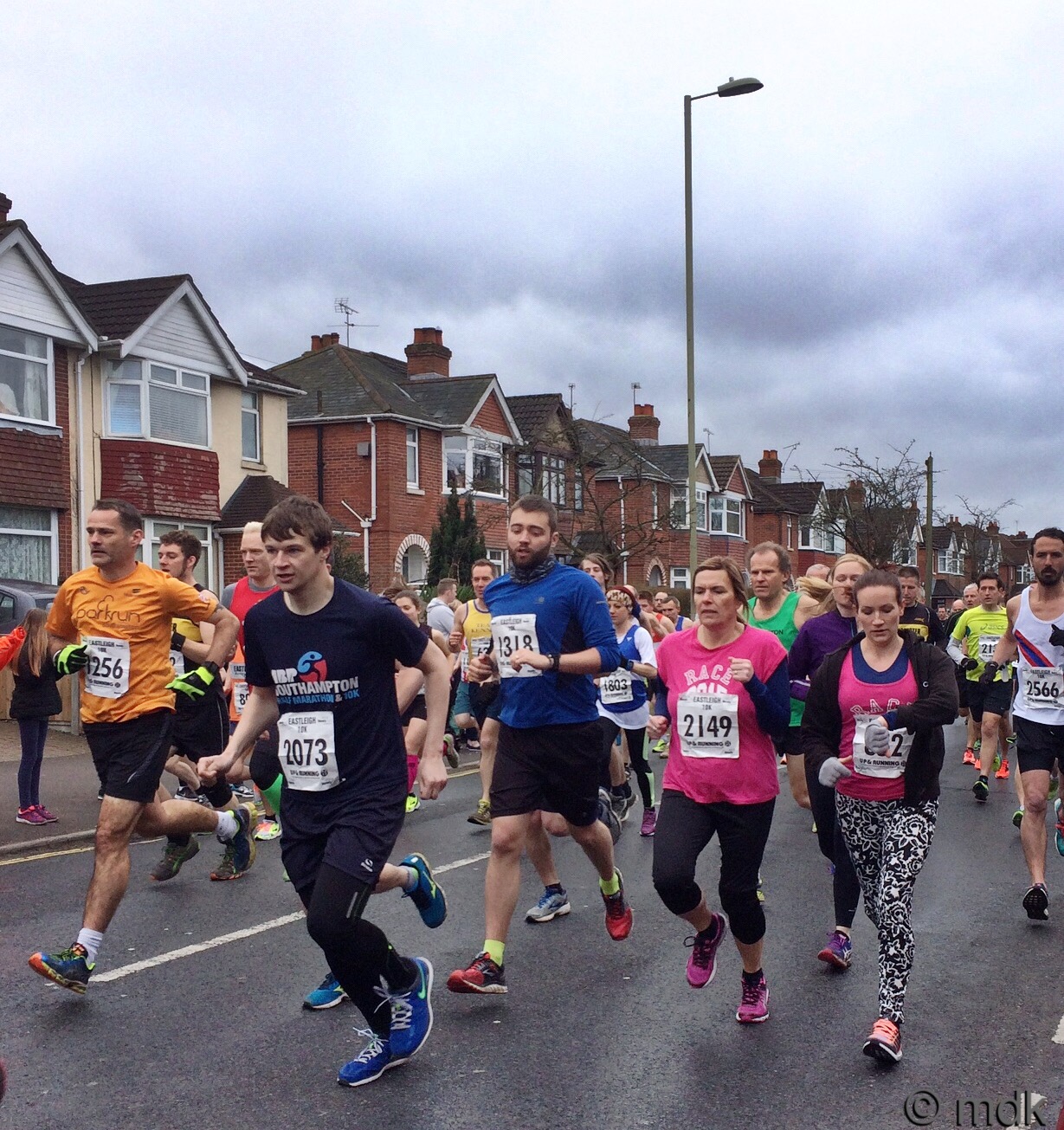 Now I turned my attention to striding towards the Costa. It’s possible Commando passed me but I didn’t see him. On the way I fell into step with a woman pushing a pushchair.
“Is your husband running too?” I asked.
“Yes, he works for Hendy Ford, the sponsors. It’s his first race,” she sounded a little worried.
“It’s a nice flat course,” I told her. “It was my husband’s first race a few years ago and he runs marathons now. It’s quite addictive so be warned.”

At Costa I helped her get her pushchair up the steps and then went off to use the loo. By the time I came out the queue, which had been fairly manageable, had grown. I tagged on the end and the people who came after me were actually queueing outside the door. Perhaps the toilet stop would have been better left until after I had my coffee in my hand. 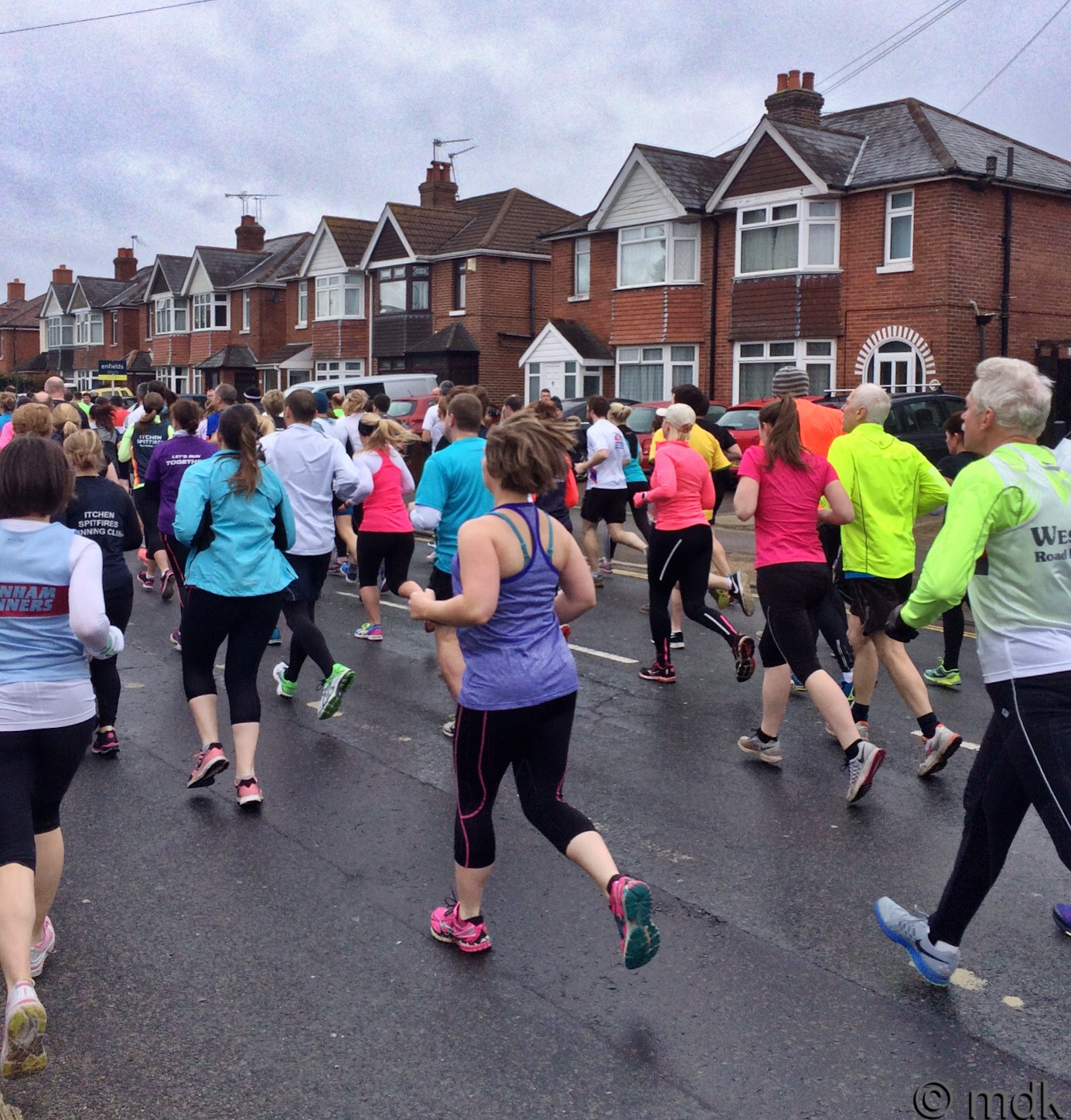 By the time I had my coffee and was heading back down the road towards the leisure centre a trickle of runners were already beginning to come past in the other direction. These were the elite few. It would be a long time until Commando passed. A little further down the road I bumped into an ex colleague from Dream Factory and stood for a while chatting. By the time we parted company the trickle had turned into a steady stream and I recognised a certain Olympic athlete amongst them. It occurred to me that Commando would be far easier to spot if he had white blonde hair and bright green socks. Maybe I should buy him a bottle of hair dye? 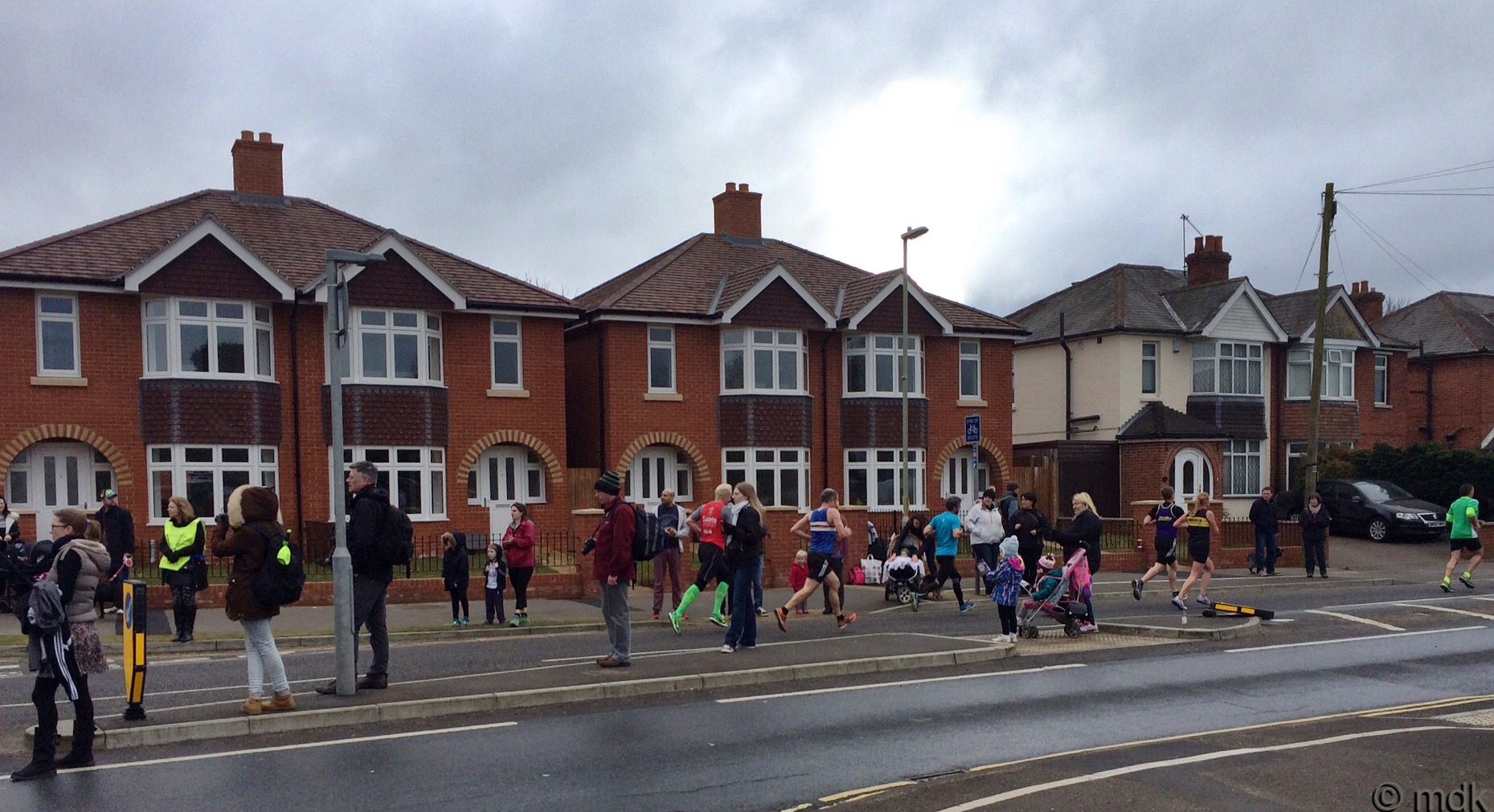 Eventually I spotted a fifty five minute pacer t-shirt amongst the crowd. It wasn’t actually Commando but I snapped away anyway. As it turned out I did catch the back of his head, half hidden behind the other runners. If only he’d been running on my side of the road I’d have had a good shot of him. How inconsiderate! 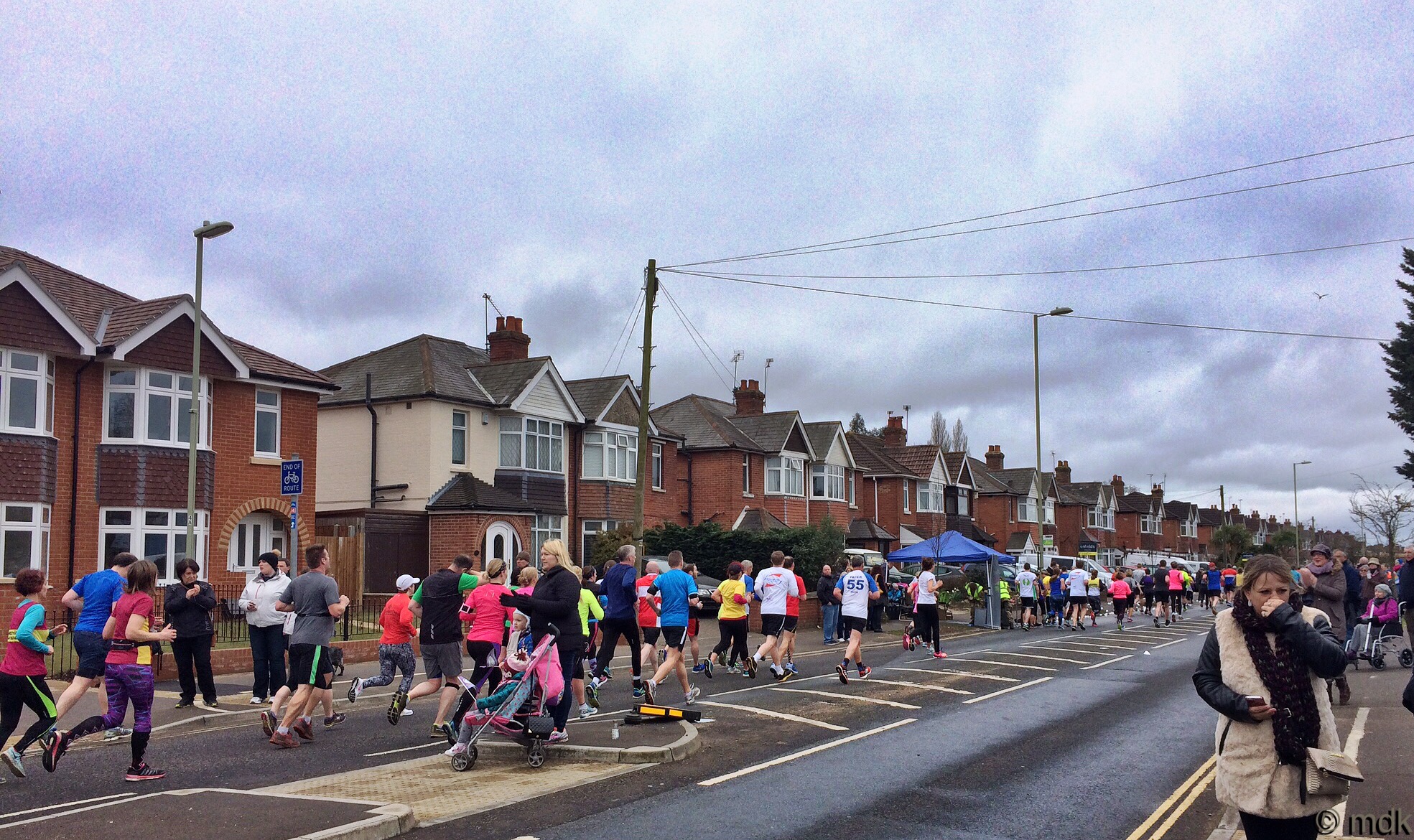 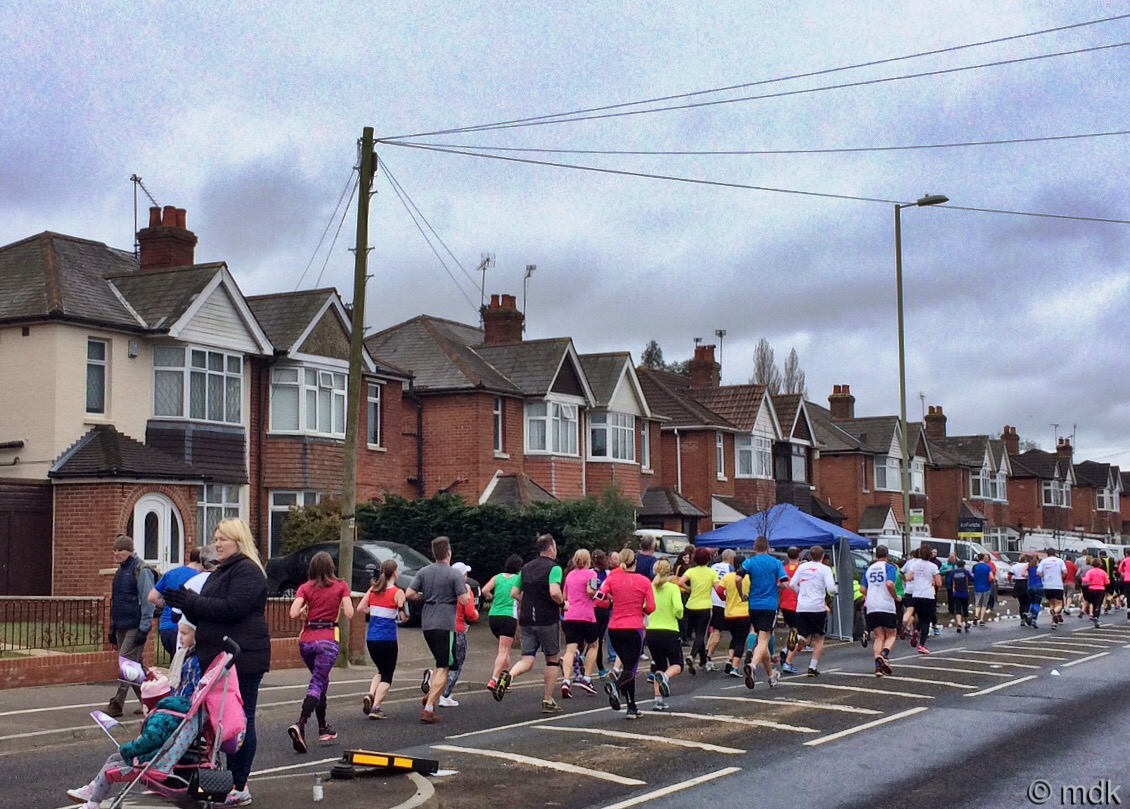 Now I knew I had to get a move on to get to the finish line before Commando did. The race course runs down to the end of the road, does a few little wiggles to the left through the streets and then loops right, back through the park to the leisure centre field. My route would be down the road and across the playing fields but I’d be walking and they’d be running. In the end there was no need to rush because Commando wasn’t running at his normal speedy pace so I had time to stroll across the field, dodging the other spectators, and find a good vantage point.

Runners were already finishing when I got there. In fact lots of them were standing about in the field chatting about their times and cheering on friends. Then the Olympic chap with the distinctive hair and green socks crossed the finish line. Given the time stamp on my photo he must have finished in around forty three minutes. It was interesting to see he looked as knackered as everyone else and even crouched down for a moment to catch his breath, of course I didn’t take a photo of that because it would have been rude. 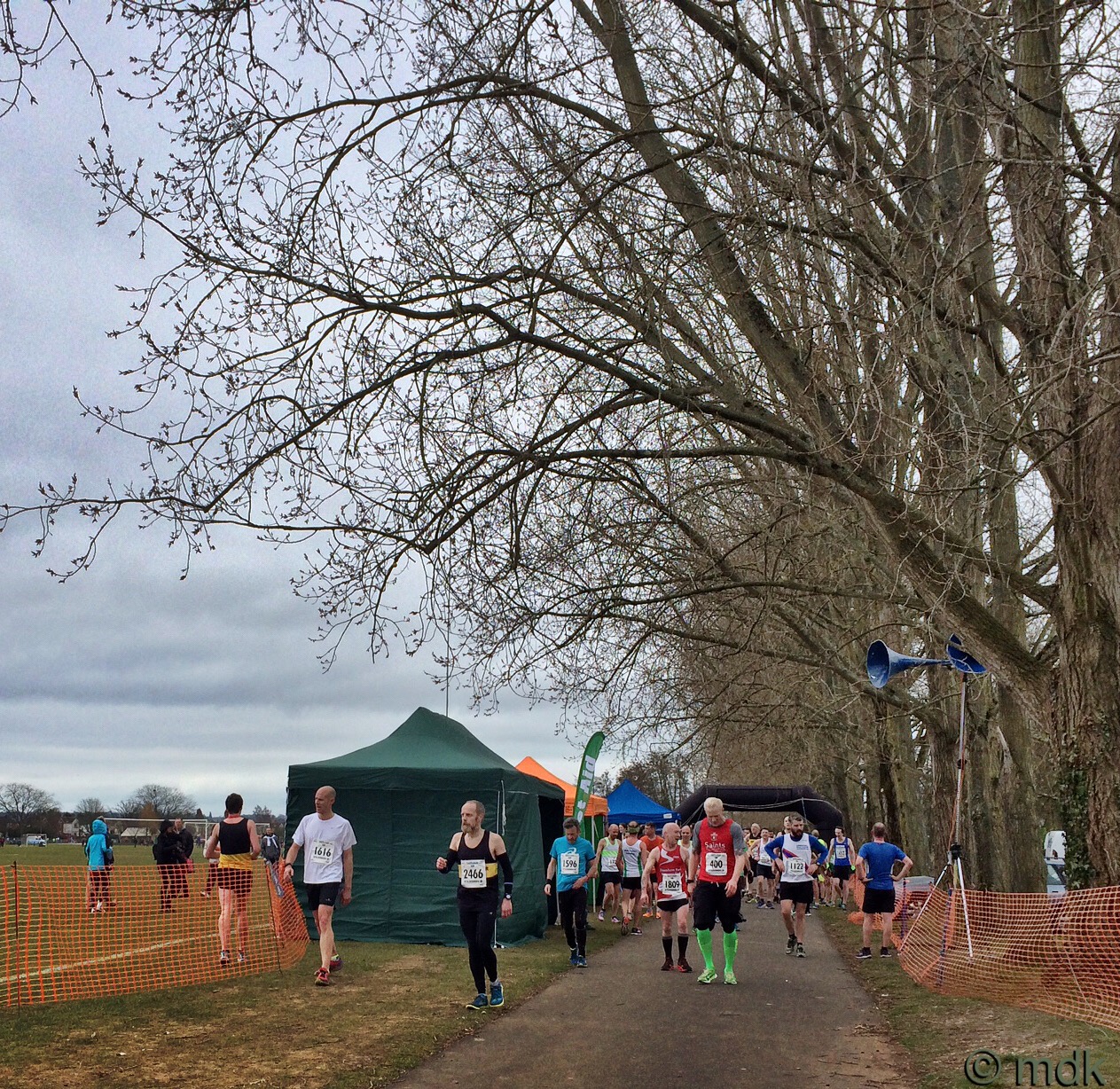 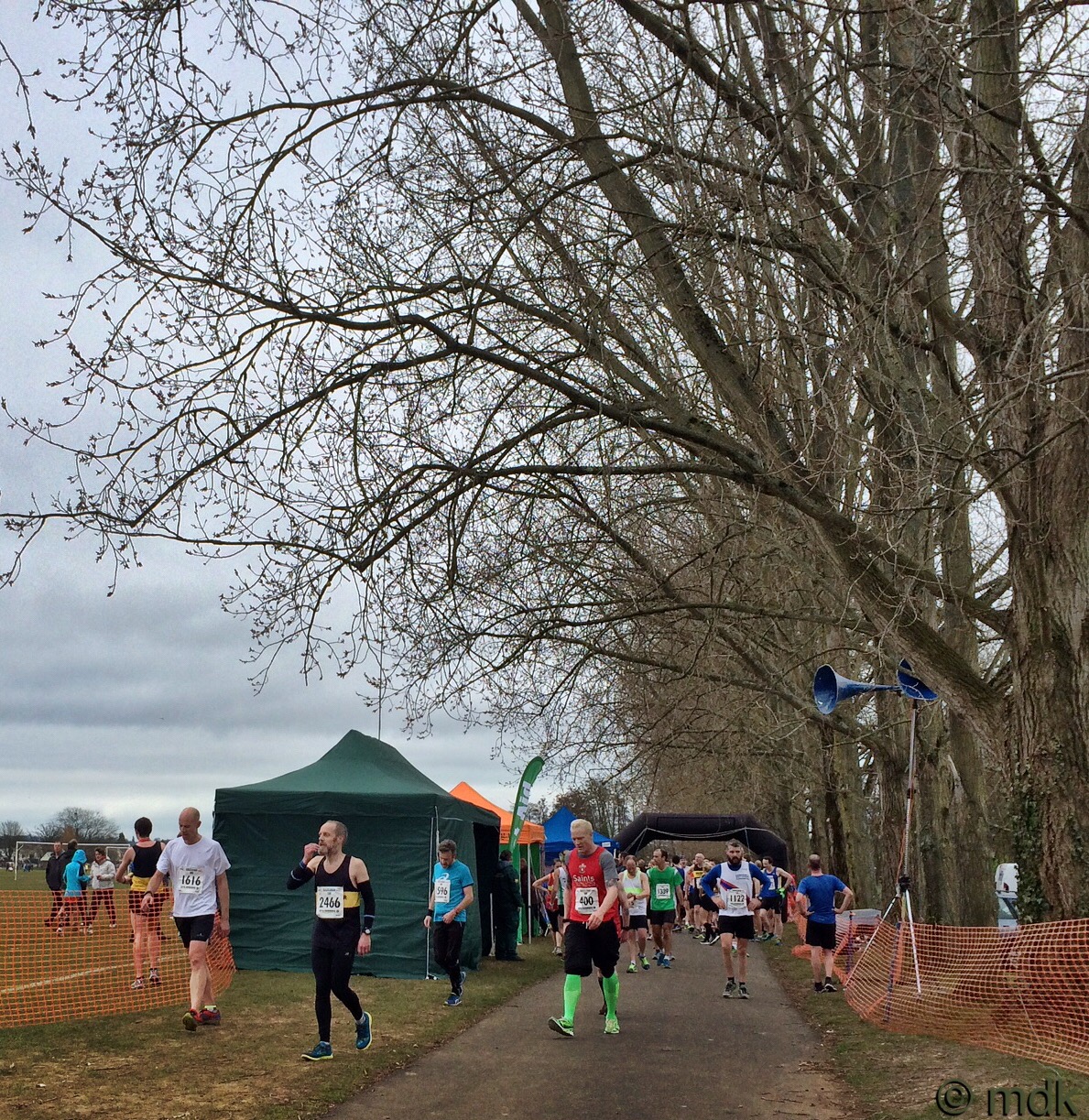 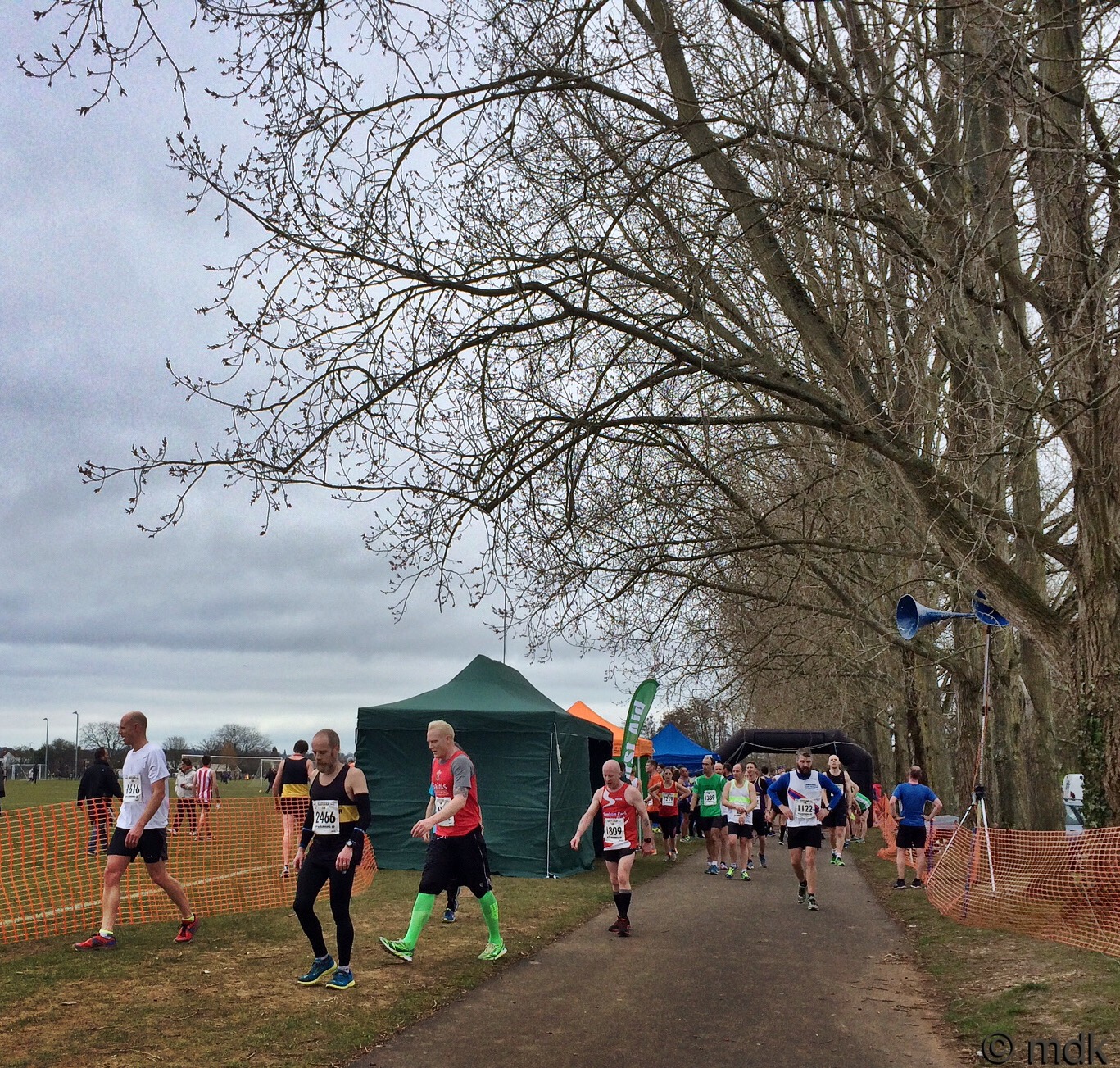 In normal circumstances I’d be expecting Commando hot on Iwan Thomas’ heels as his PB is around forty five minutes. Of course he’d be ten minutes slower because he was pacing fifty five minutes, but at least I knew when to start paying attention. He was bang on time, which was a good job for all the people trying to finish in fifty five minutes who’d been following him. He wasn’t as easy to spot as the Olympic chap and I wondered how I could persuade him to dye his hair bright pink or something similar before his next race because it would certainly help. 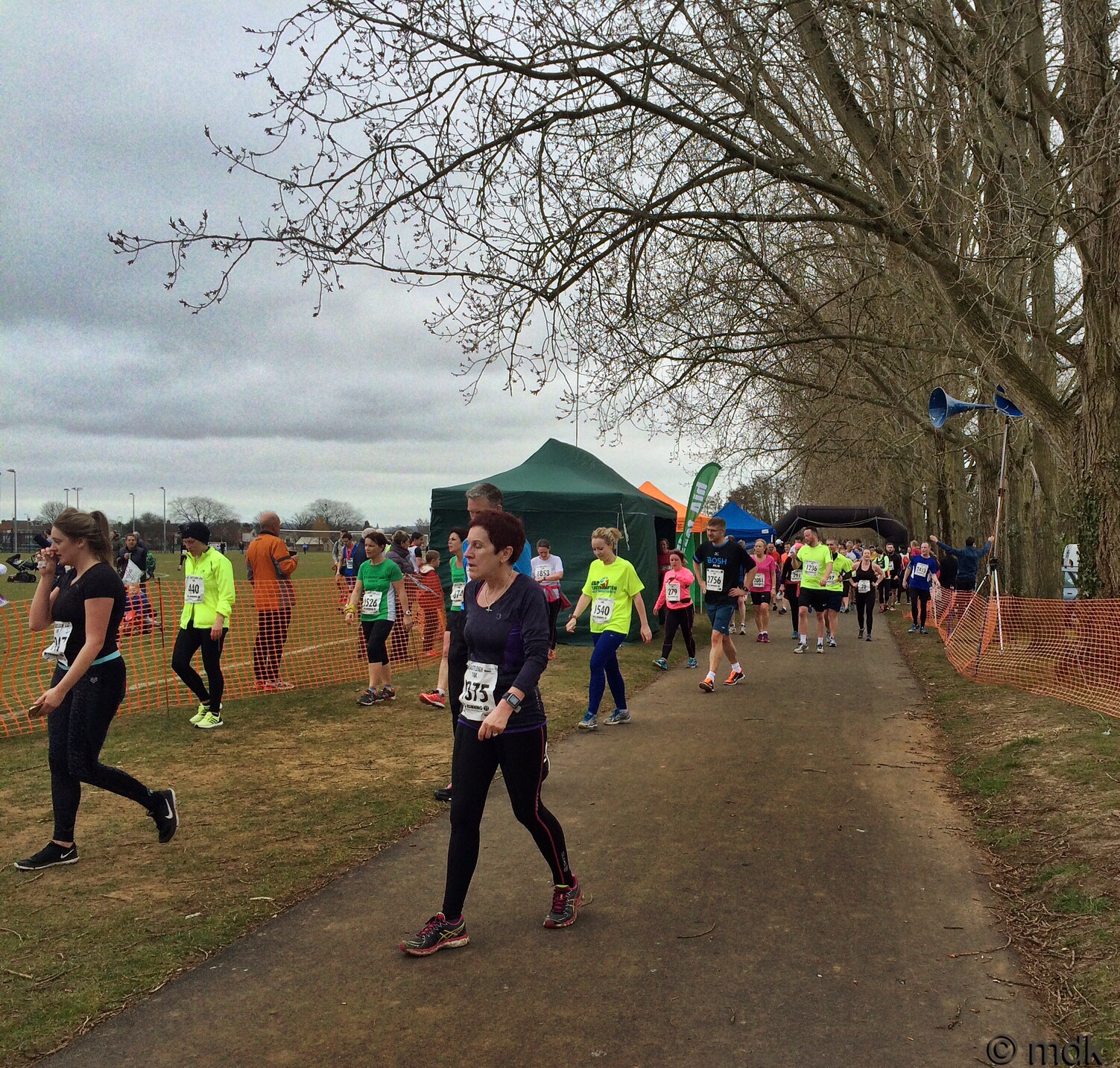 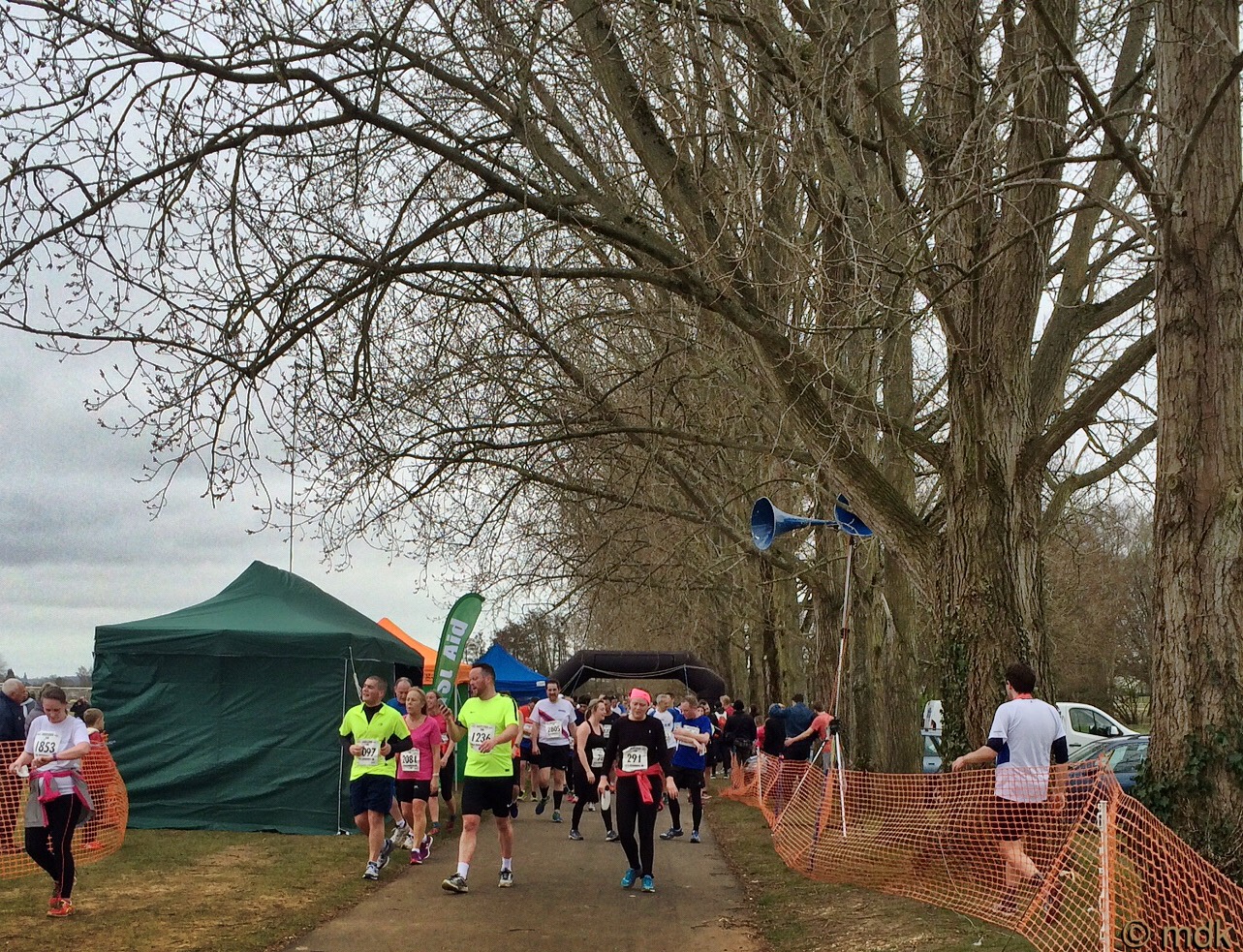 Obviously he looked as fresh as a daisy because he’d been running at what is, for him, a slow pace. In fact he was so busy chatting to the other fifty five minute pacer he didn’t even hear me shouting his name. This meant I had to dash through the throng to the place the runners emerged with their medals. 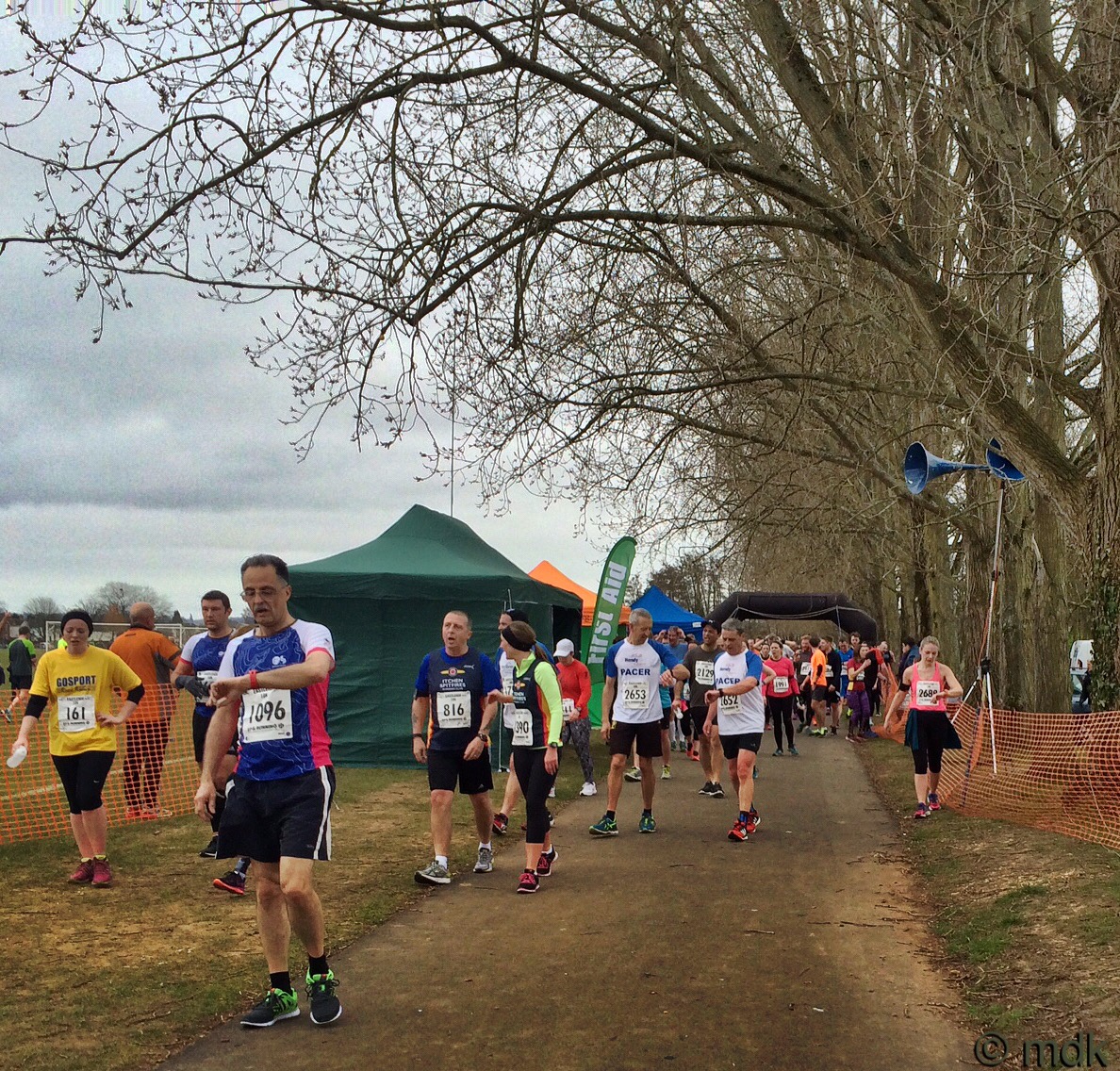 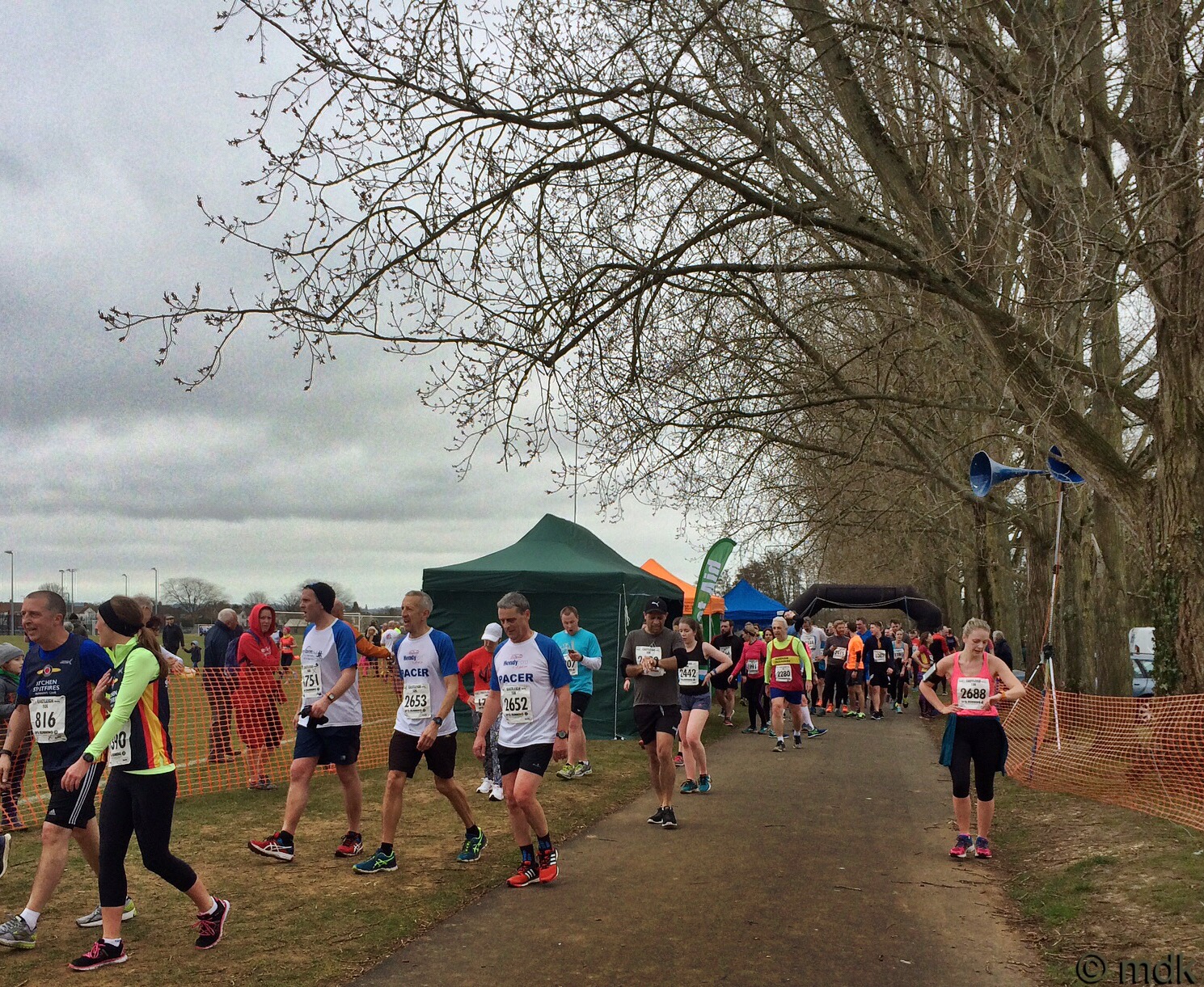 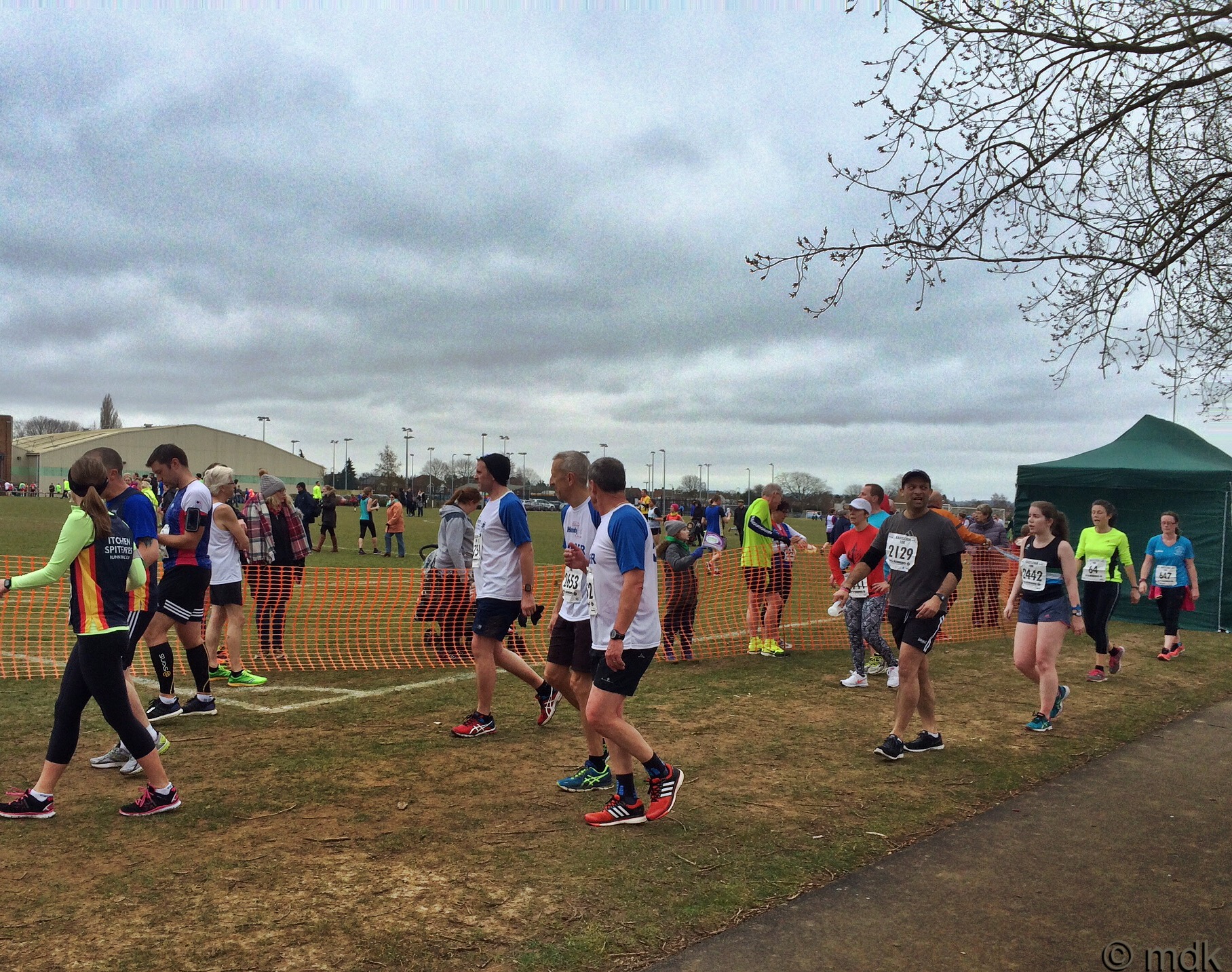 Within seconds I’d lost him in the crowd and it felt like shades of the Eastleigh 10k 2013, when I’d completely missed him finishing because of the crowds and got a tiny bit frantic. Luckily I found him fairly quickly and we were soon on our way back to the elite Pacer’s changing room. It had been an odd race. For once Commando wasn’t worried about his finishing time, he’d been trying to run slowly, if that is actually possible. We were in the car on the way home when he realised he hadn’t even looked at his medal.