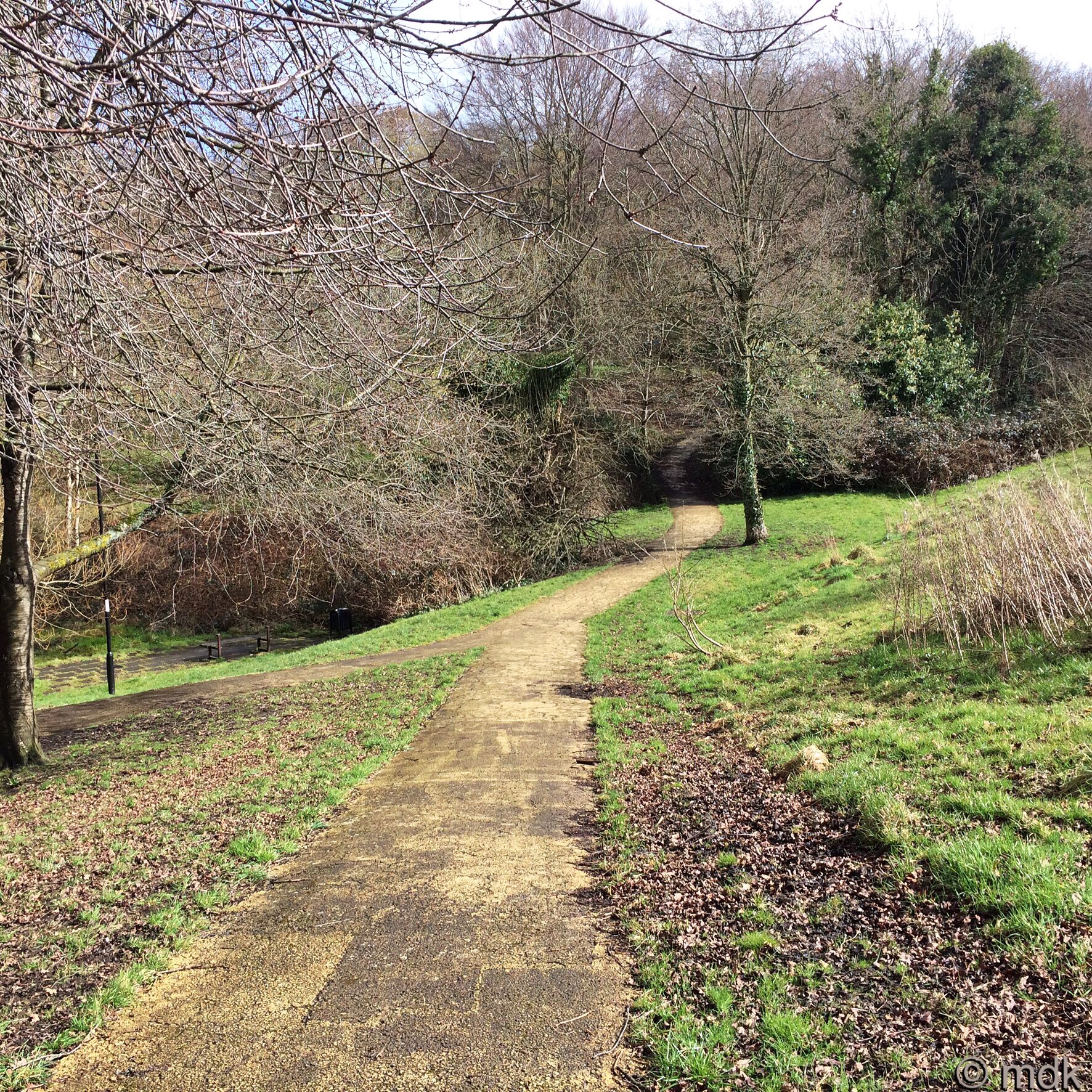 Typically, as soon as building work stopped for the Easter break the weather took a turn for the wet and windy. The first chance I got to go out walking was Easter Sunday and it was blustery with the odd spot of rain. Still, it was now or never. There was somewhere I’d been meaning to visit for a while and our Thursday afternoon arch shopping trip told me time was running out. By coincidence, it is a building site of sorts and I was half reluctant to go there.

When I left home the sun was shining but as I descended into Hum Hole rain was still sparkling on the catkins along the path. With a long walk ahead of me I was pretty sure I was going to get wet before I got home. Climbing up the other side the laurel flowers made me sneeze. They seemed a little early but then isn’t everything this year? 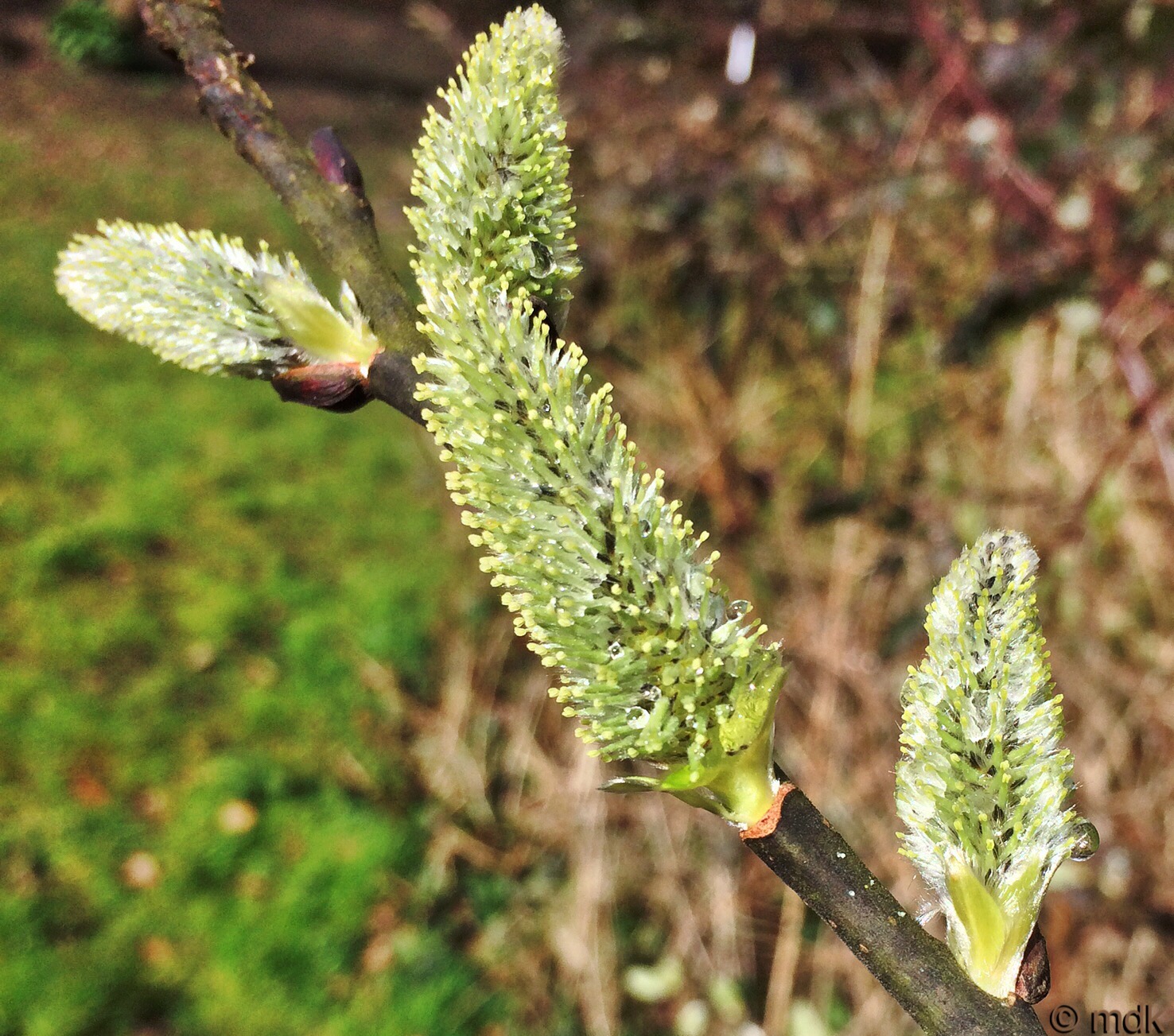 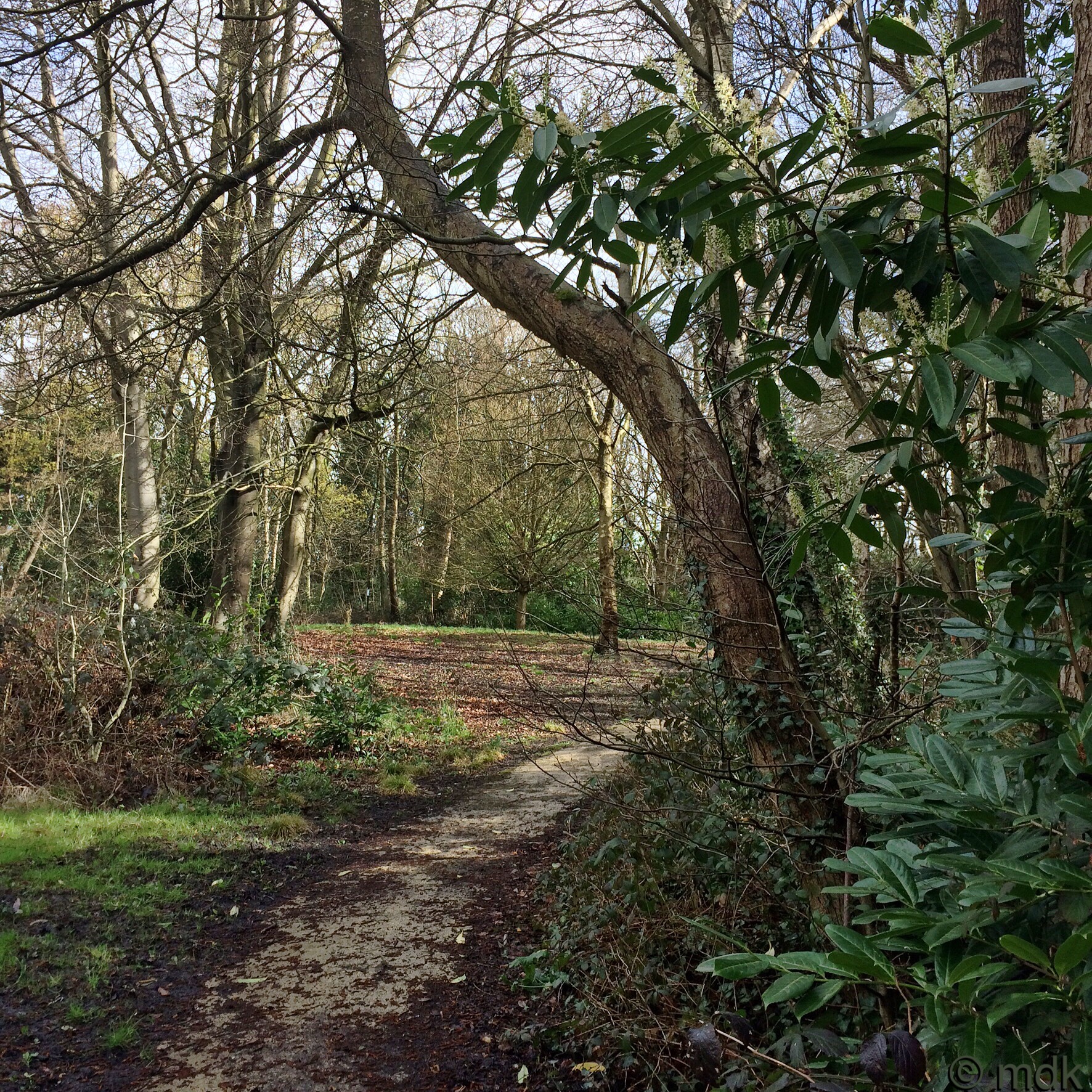 Rivulets of rainwater ran from the woods across the path and down into the deep valley. Further on, the trail was muddy as I’d expected. At the very top I was rewarded for my efforts with mud covered boots and scattered bluebells, the first I’ve seen this year. They were worth the climb. 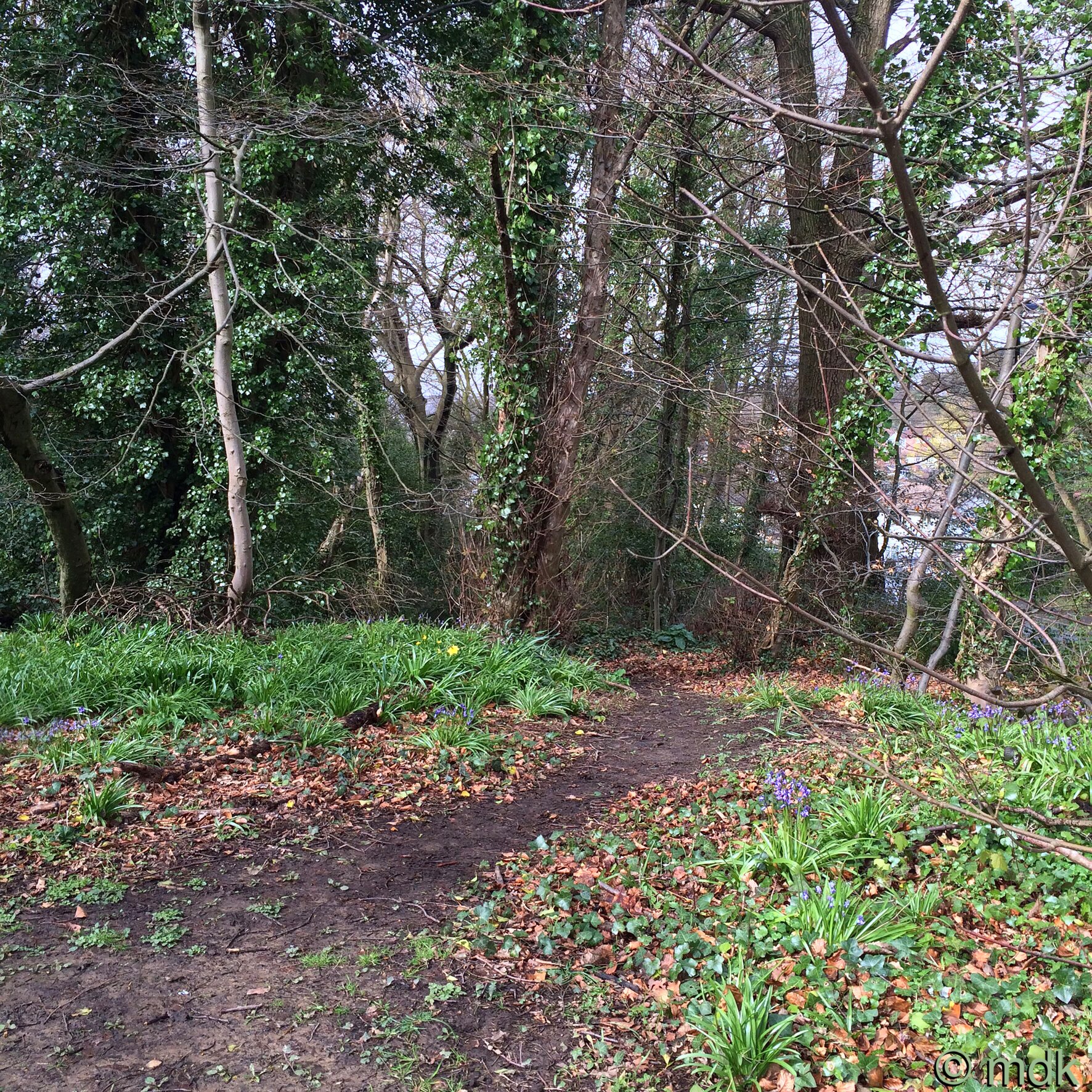 Further on there was white blossom freshly washed by the rain to make me smile. This was what I’d been missing so much when I was cooped up at home all week. It wasn’t long before I was leaving Southampton behind. At the top of Chalk Hill I passed the sign welcoming me to Eastleigh and West End. A couple of minutes later a magnificent magnolia did a better job of welcoming than the sign ever could. 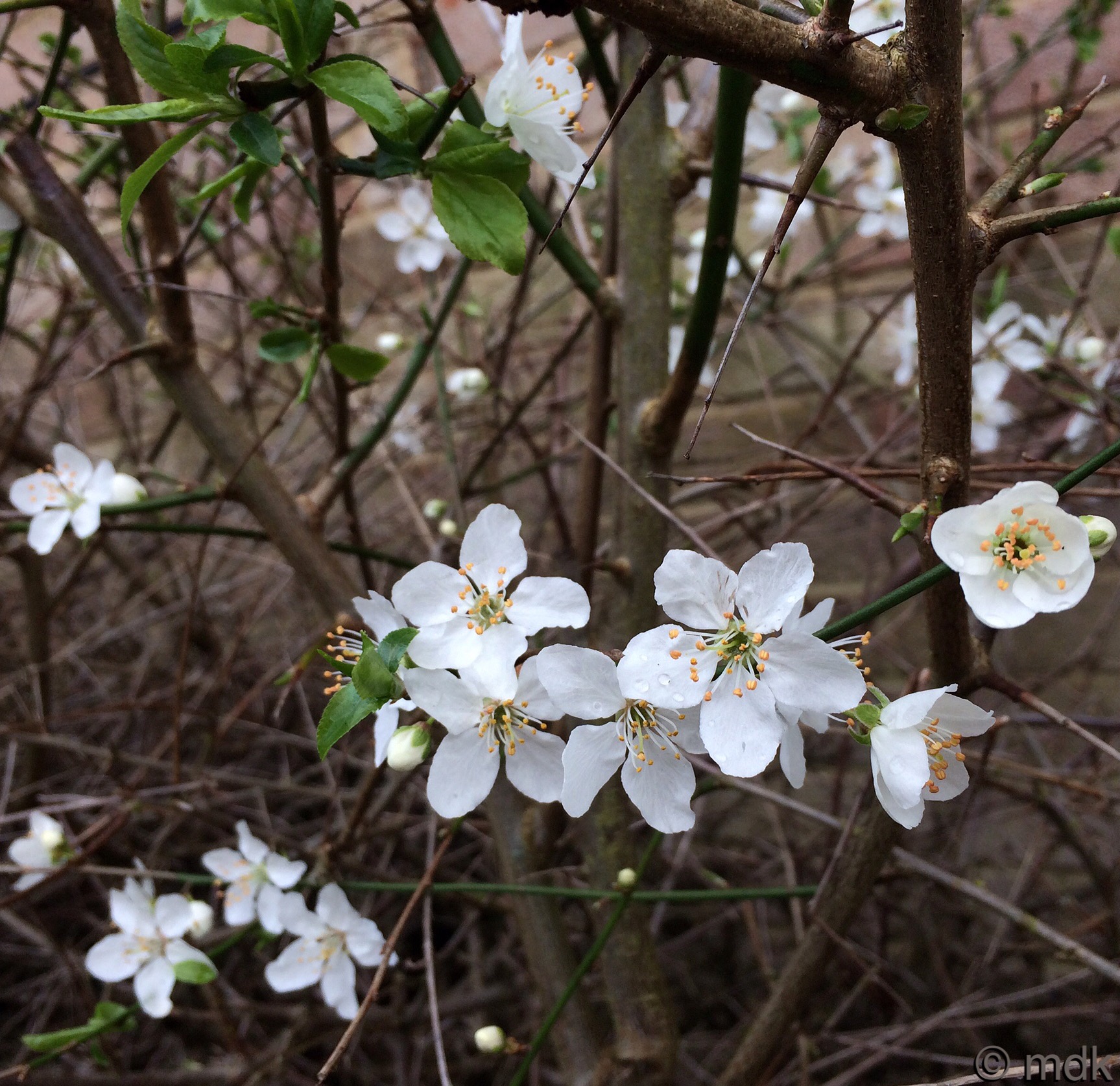 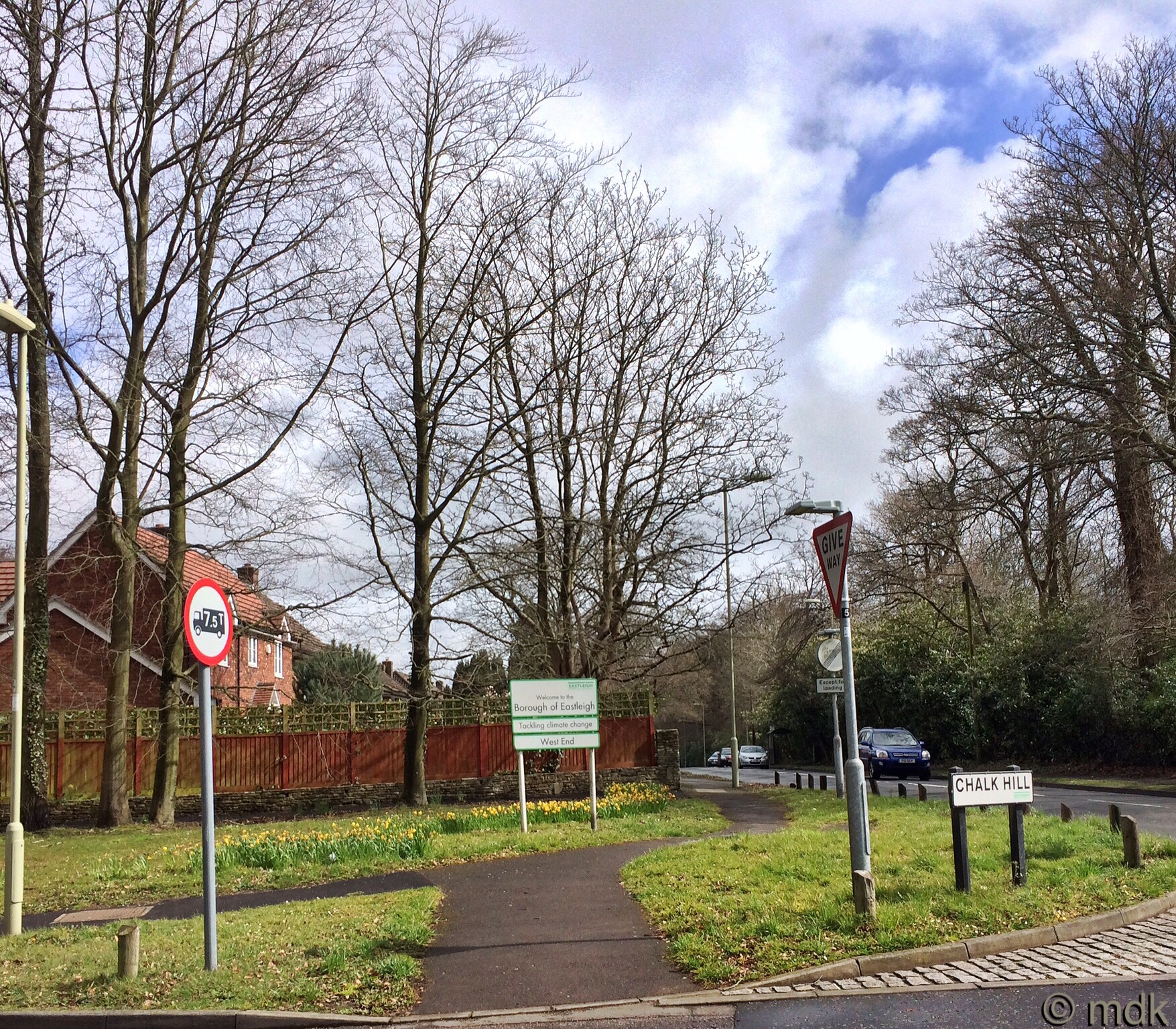 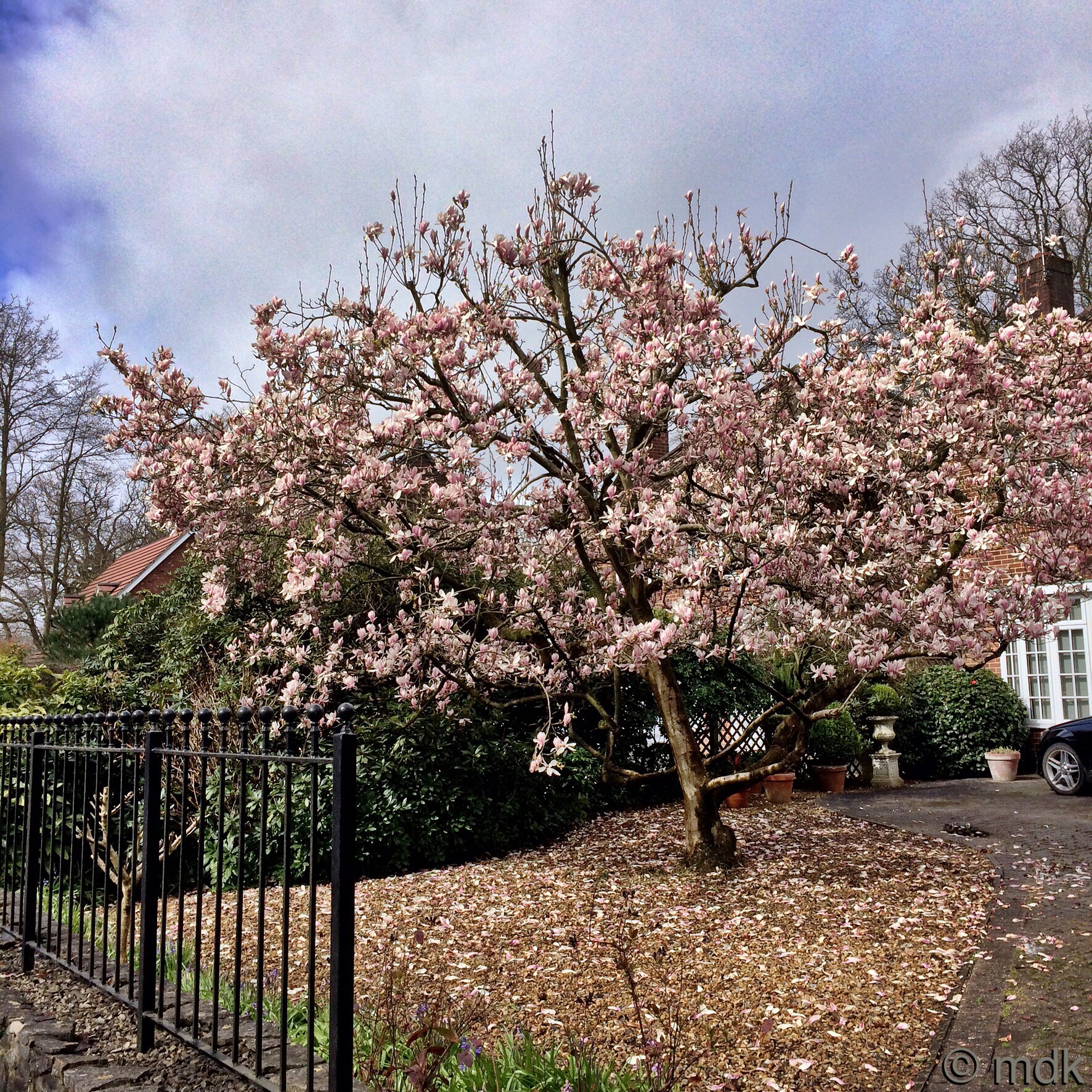 When I came to Church Hill my journey, which had been uphill until then, suddenly became downhill. On the corner St James’ Church was shrouded by scaffolding but this wasn’t what I’d come to see so I carried on, pausing for a moment to admire an acid splash of euphorbia beside a fence. The road had a slick sheen of recent rain and I realised I was heasing towards a storm. Hopefully it would stay in front of me. 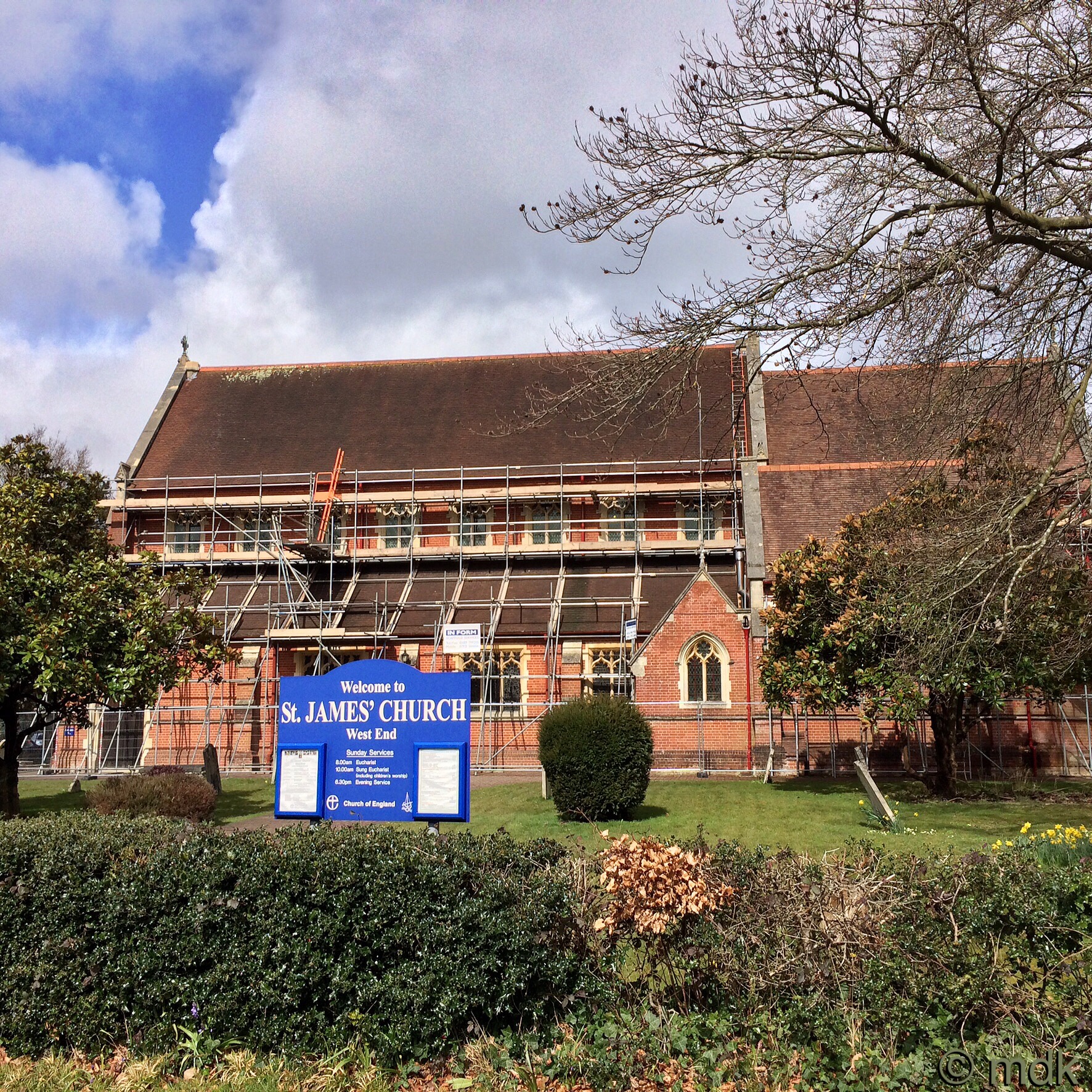 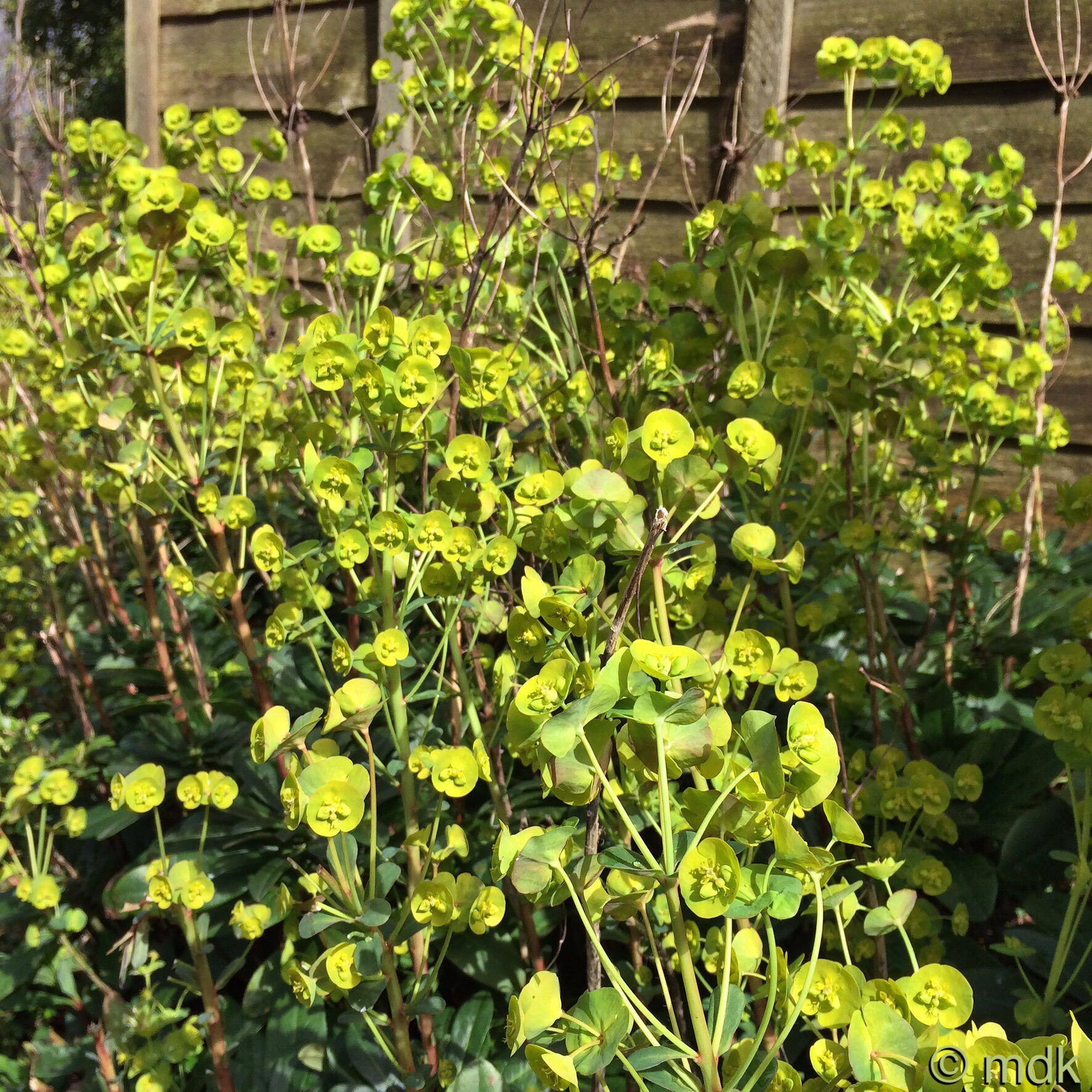 This is not familiar territory so I was surprised when I spotted a graveyard at the bottom of the hill. Although I was eager to get on before the rain fell it seemed fitting to pop in for a moment of contemplation given what lay ahead. It was filled with bright spring flowers but the haze of rain on the distant hills pushed me onwards. 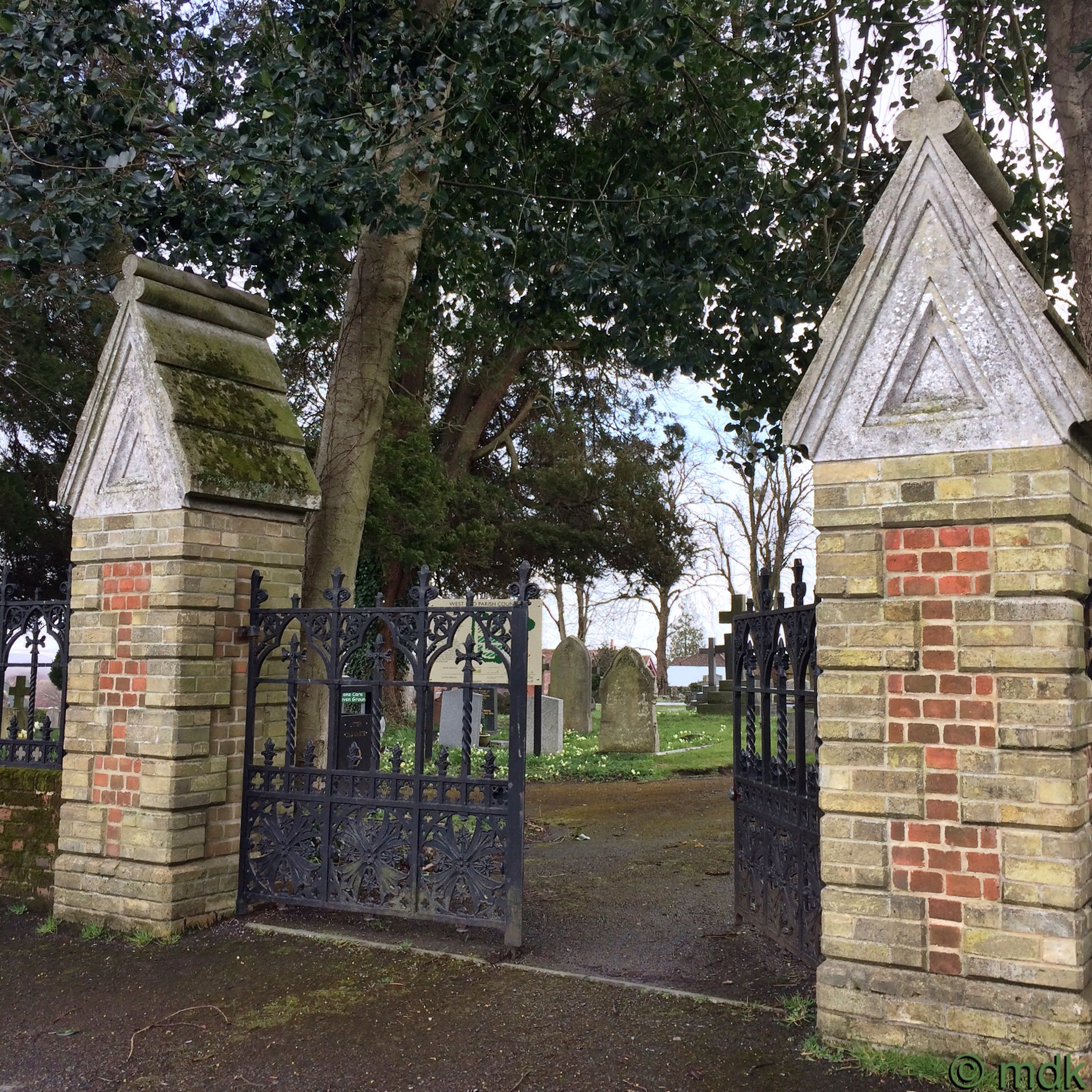 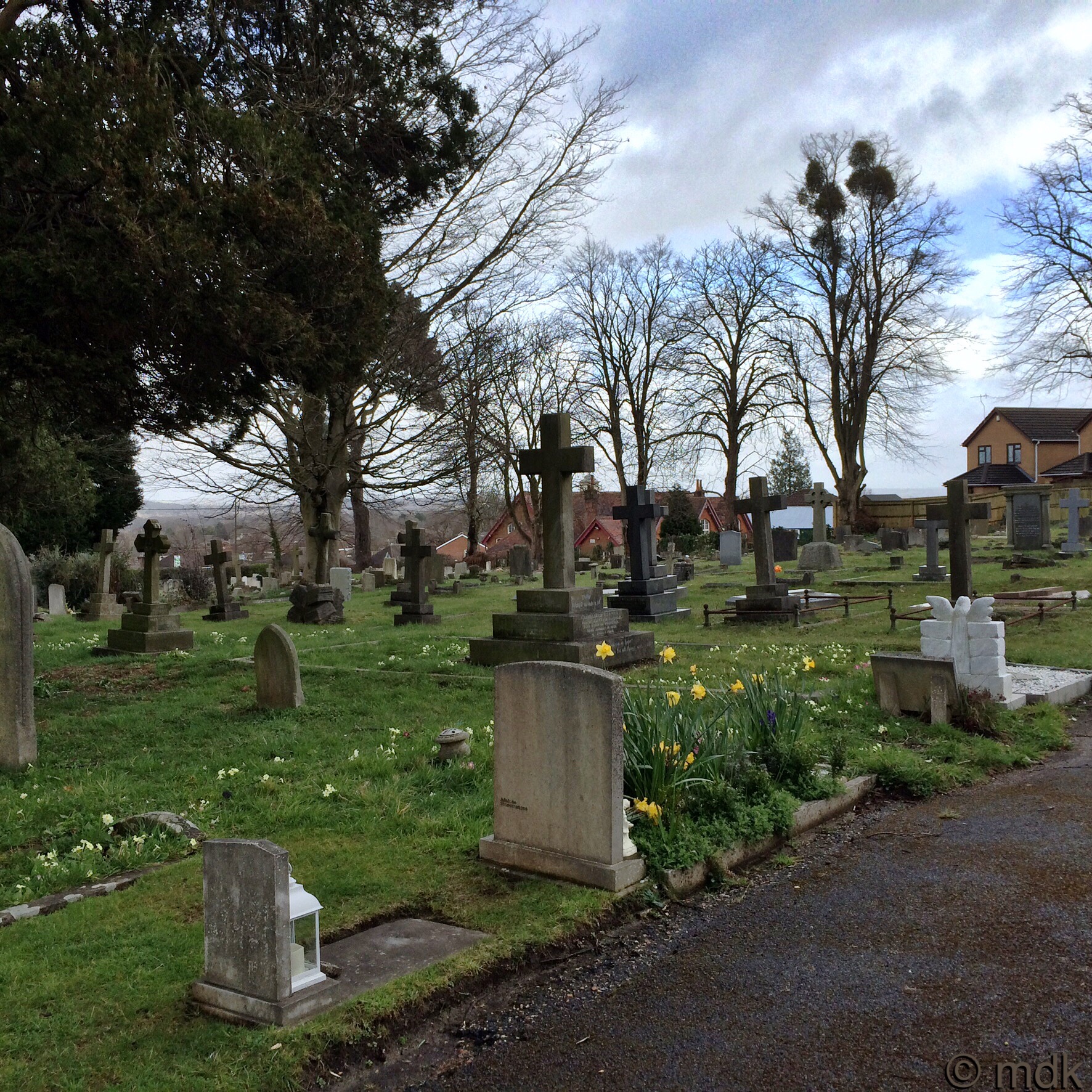 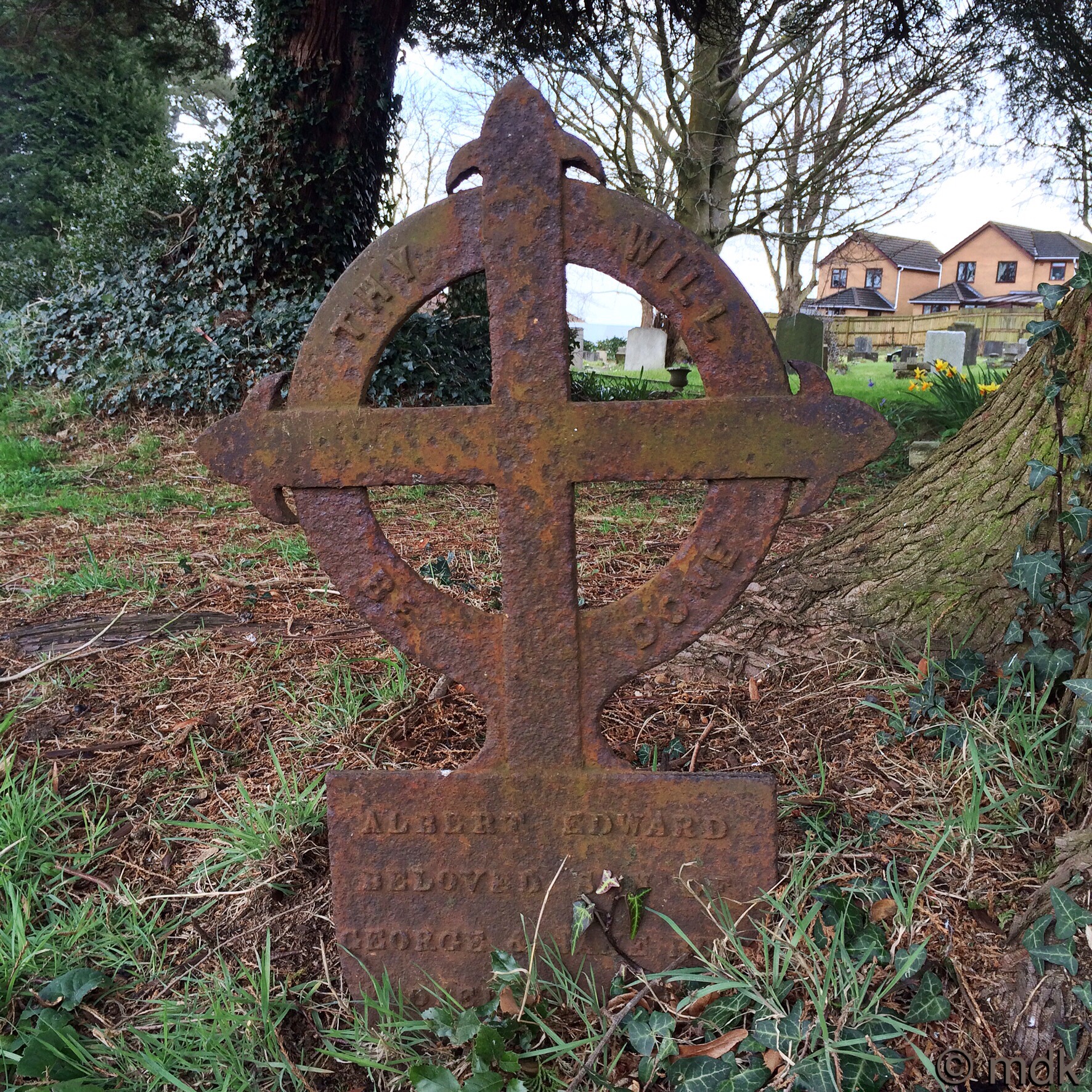 On the final corner I couldn’t resist the stunning war memorial with its unusual Celtic design and drifts of poppy wreaths, especially with such a brooding sky. The school turned community centre looked interesting too and I took a couple of pictures to remind me to come back another day to find out more. Perhaps all the stops and photos were just procrastination though. There were ghosts ahead after all. 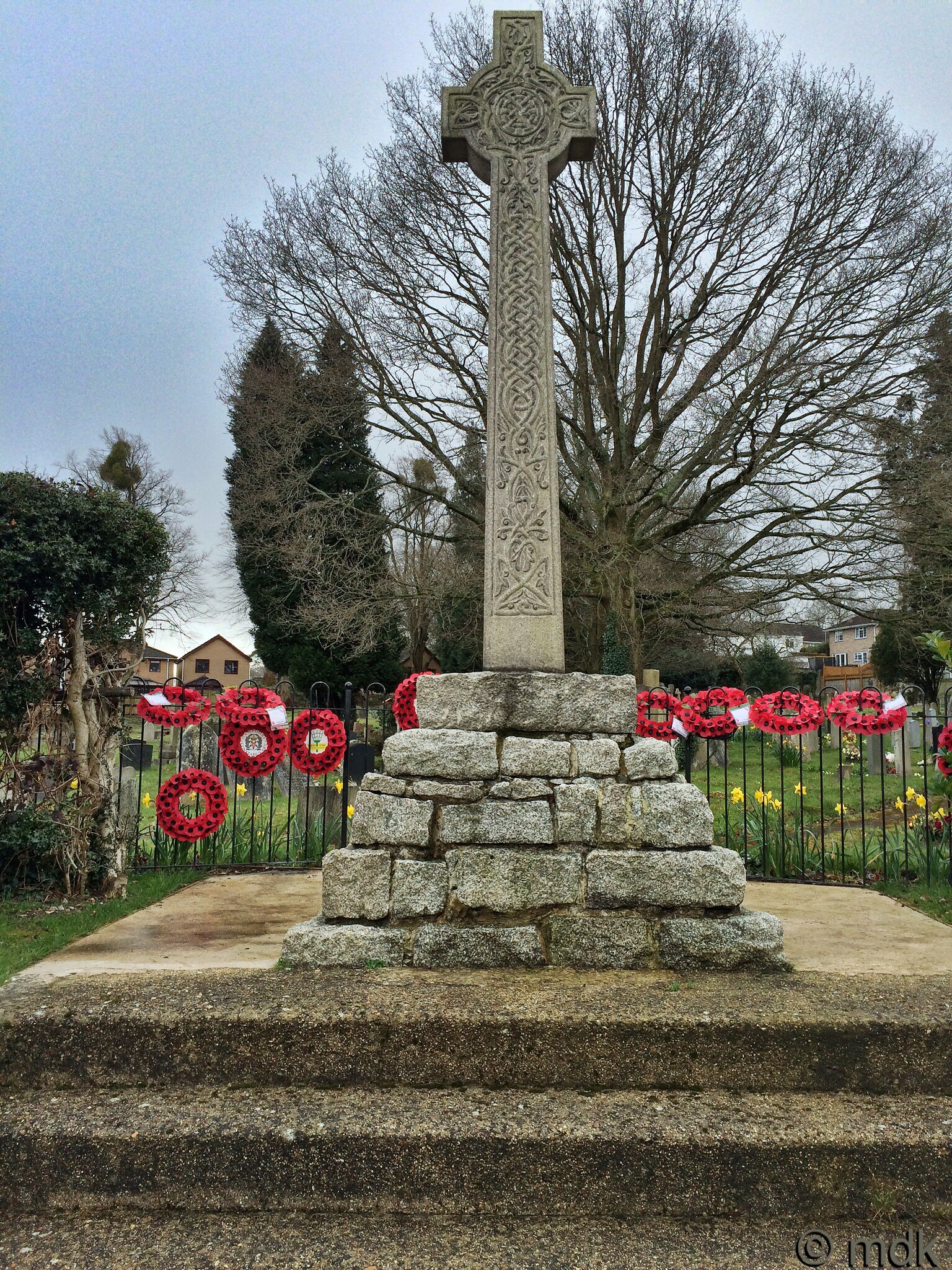 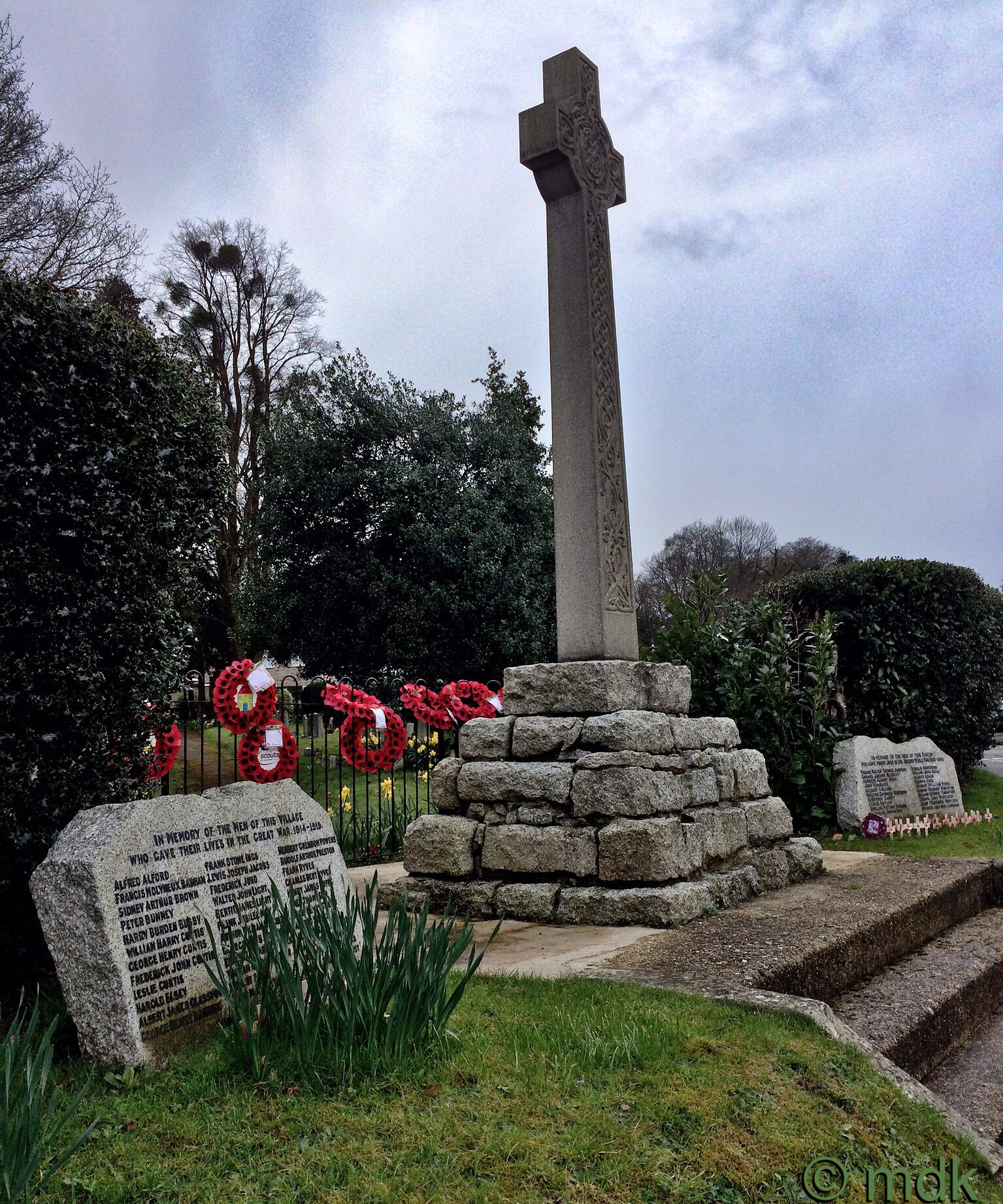 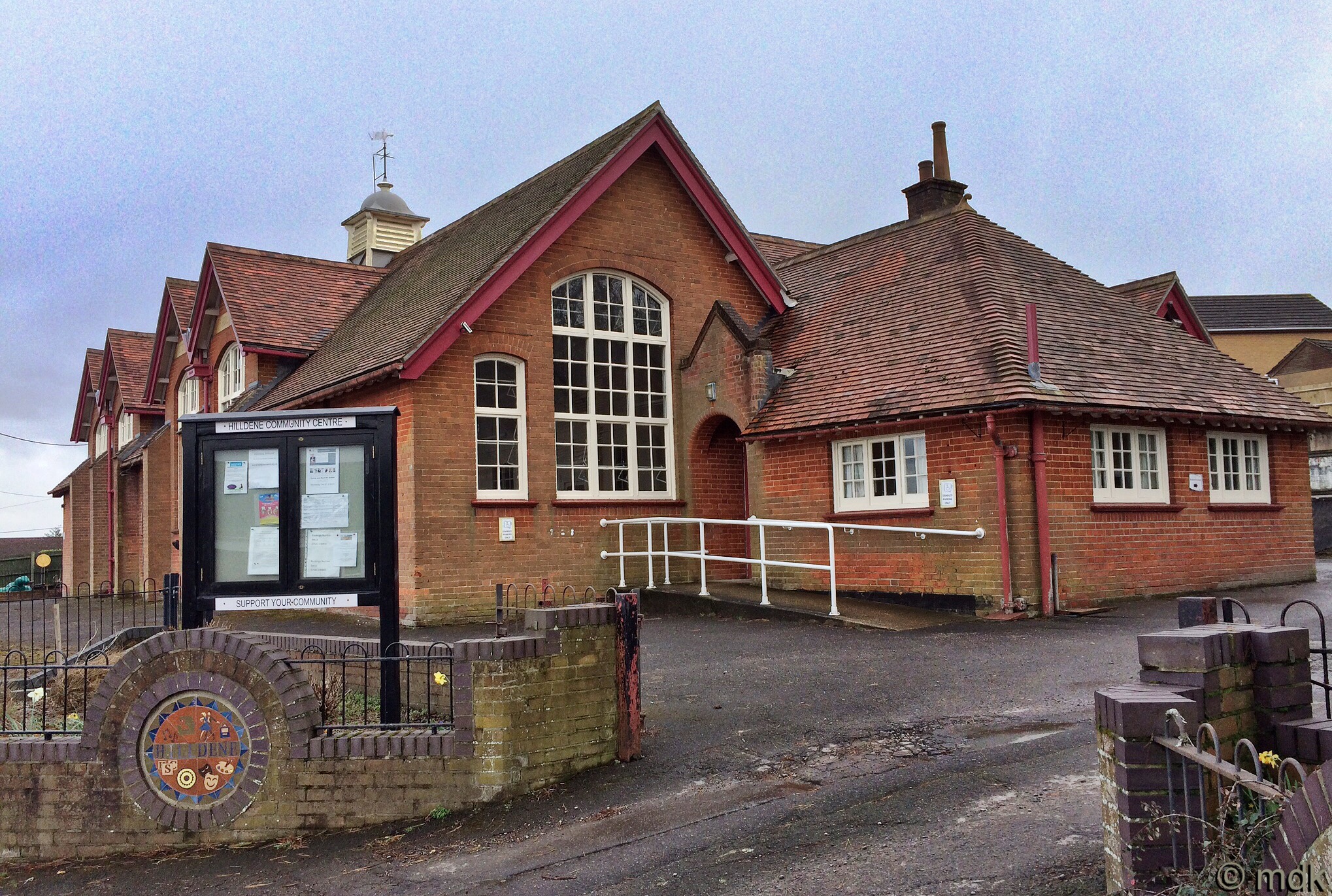 Along the road I could see workmen putting up a framework for hoardings. It was a surprise to see them working on Easter Sunday but, as I approached, they all disappeared into the grounds. Perhaps the speckles of rain had sent them inside? Finally I’d reached Moorgreen Hospital, the purpose of my walk, and it was obvious this really would be my last chance to see it before it was demolished. 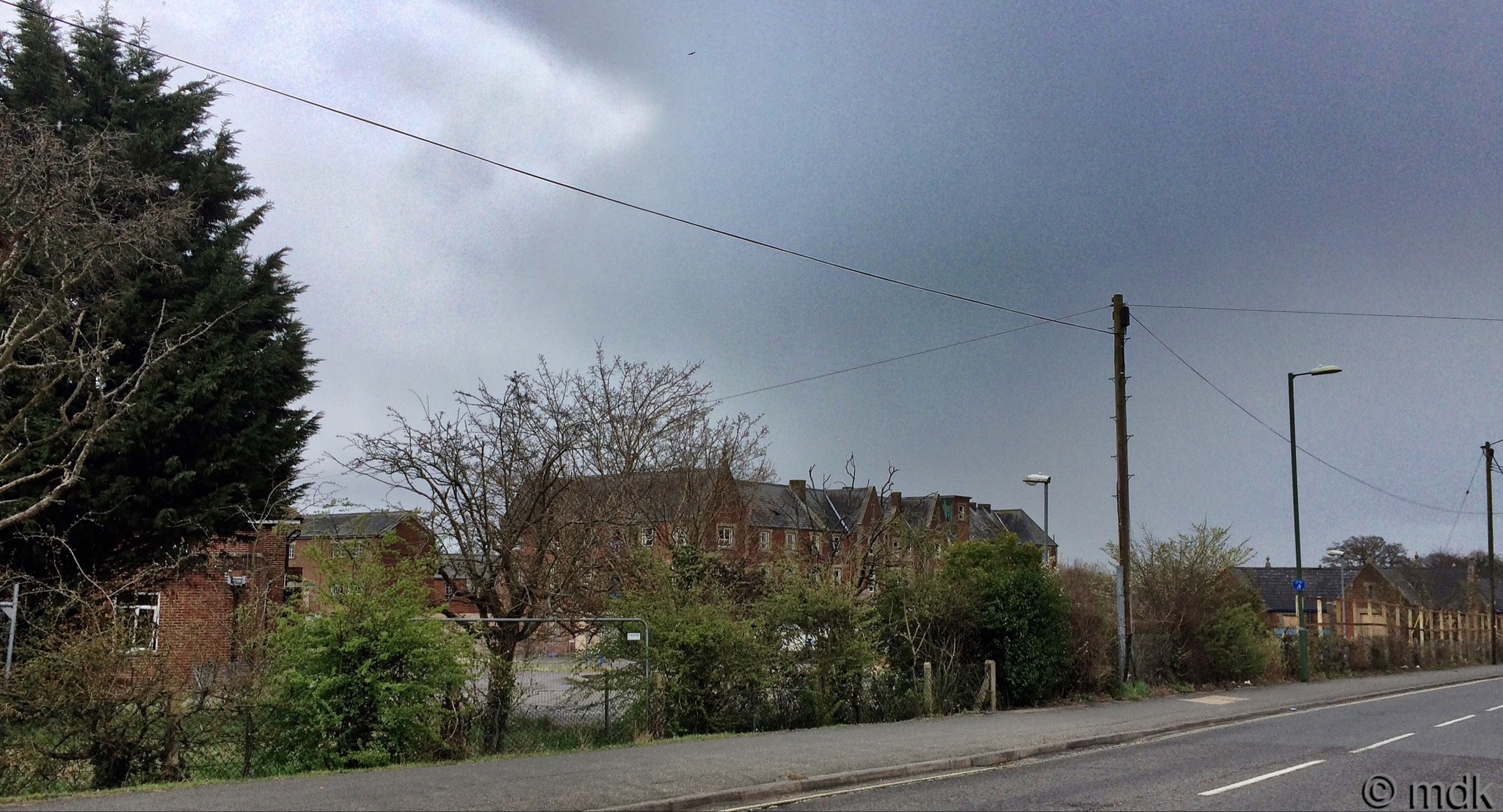 The hospital began life as South Stoneham Union Workhouse in 1848. The forbidding looking red brick building was designed by William Henman and replaced the old workhouse. Undoubtedly it was an improvement but it’s unlikely anyone ever passed through the doors with a smile. Life in a workhouse was designed to be hard to ensure only the really desperate entered. At this workhouse many of the destitute were put to work cultivating the surrounding land. This was probably preferable to some of the alternatives, like unraveling the fibres of old hemp ropes or breaking rocks. 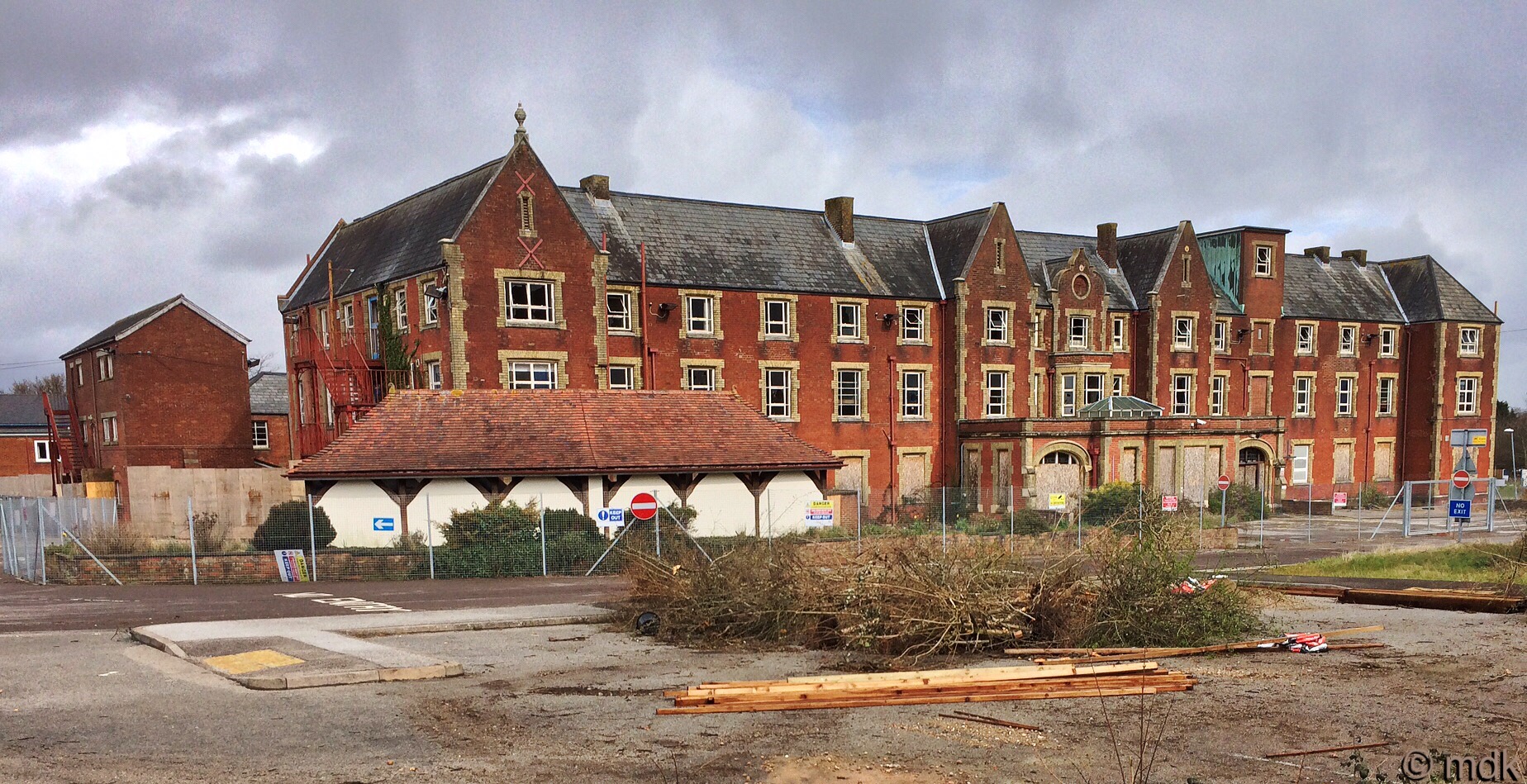 Flanking the entrance two small buildings were used as receiving blocks for the casual paupers, vagrants who stayed just a night or two trading three hours hard labour for a bed. One was for the male casuals, the other for the females. The buildings still stand, but not for long it would seem. 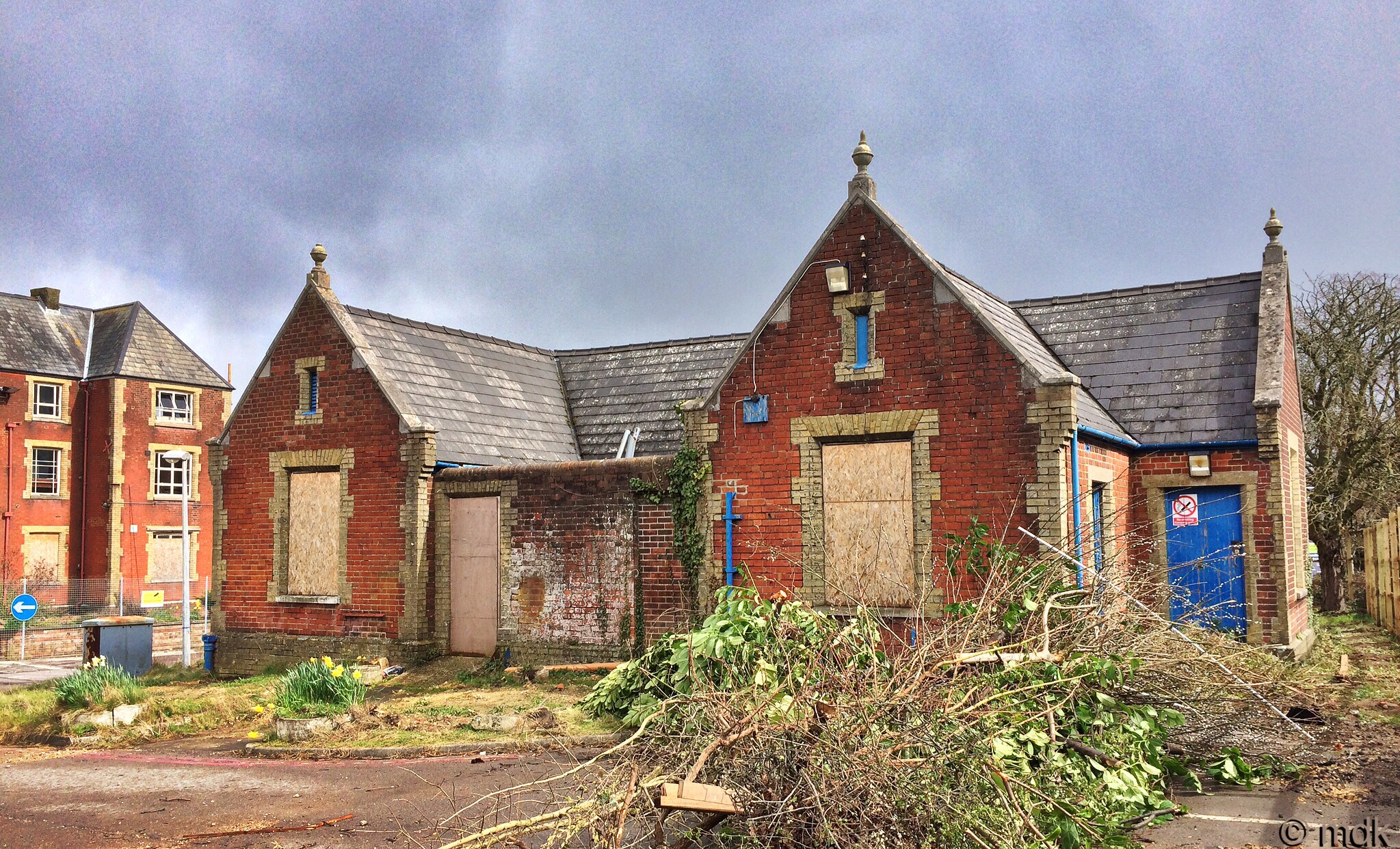 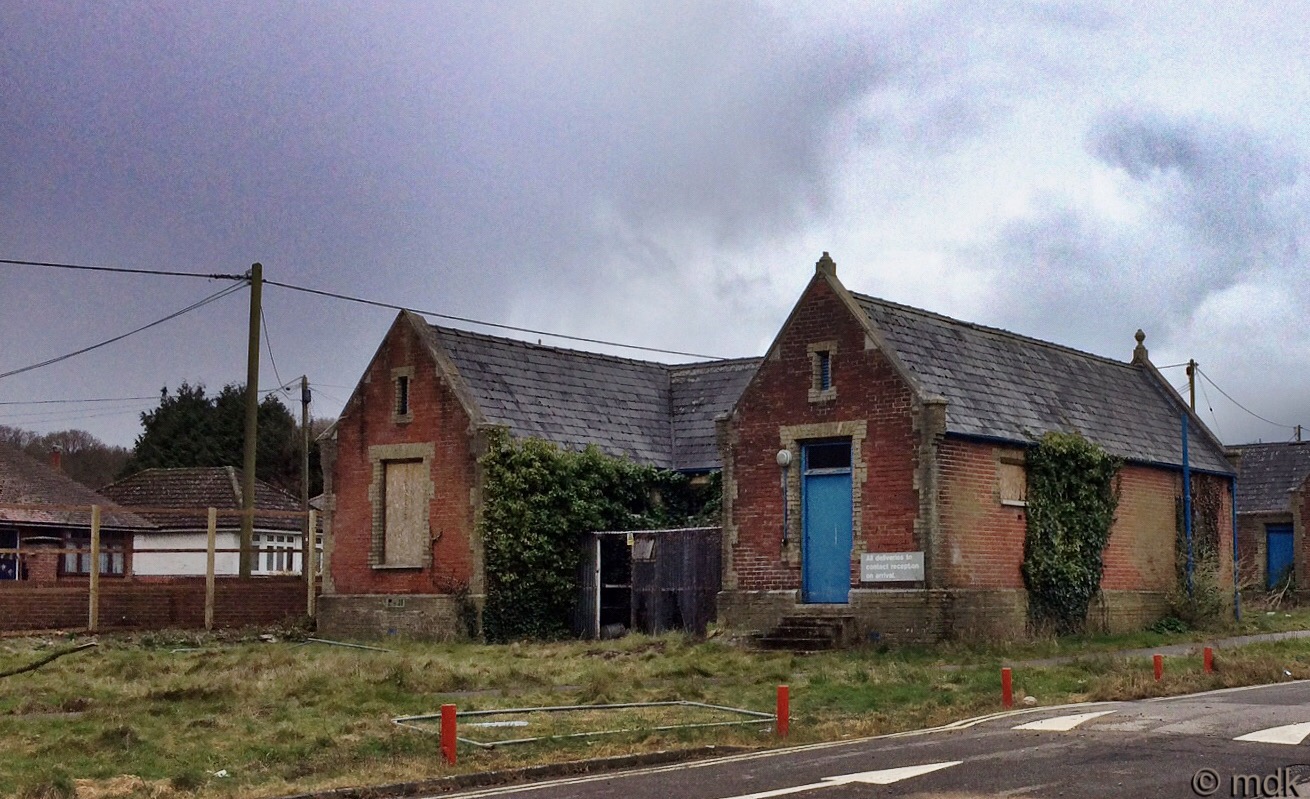 In the 1930’s, when workhouses were abolished, the building was renamed West End Institution and became a Public Assistance Institution, for the elderly, chronically sick, unmarried mothers and, of course, vagrants. It was, to some extent, a change in name only as many of the staff and inmates remained. The spectre of the workhouse finally left the Moorgreen site in 1948 when the NHS was formed, the Ministry of Health took over and it became Moorgreen Hospital. 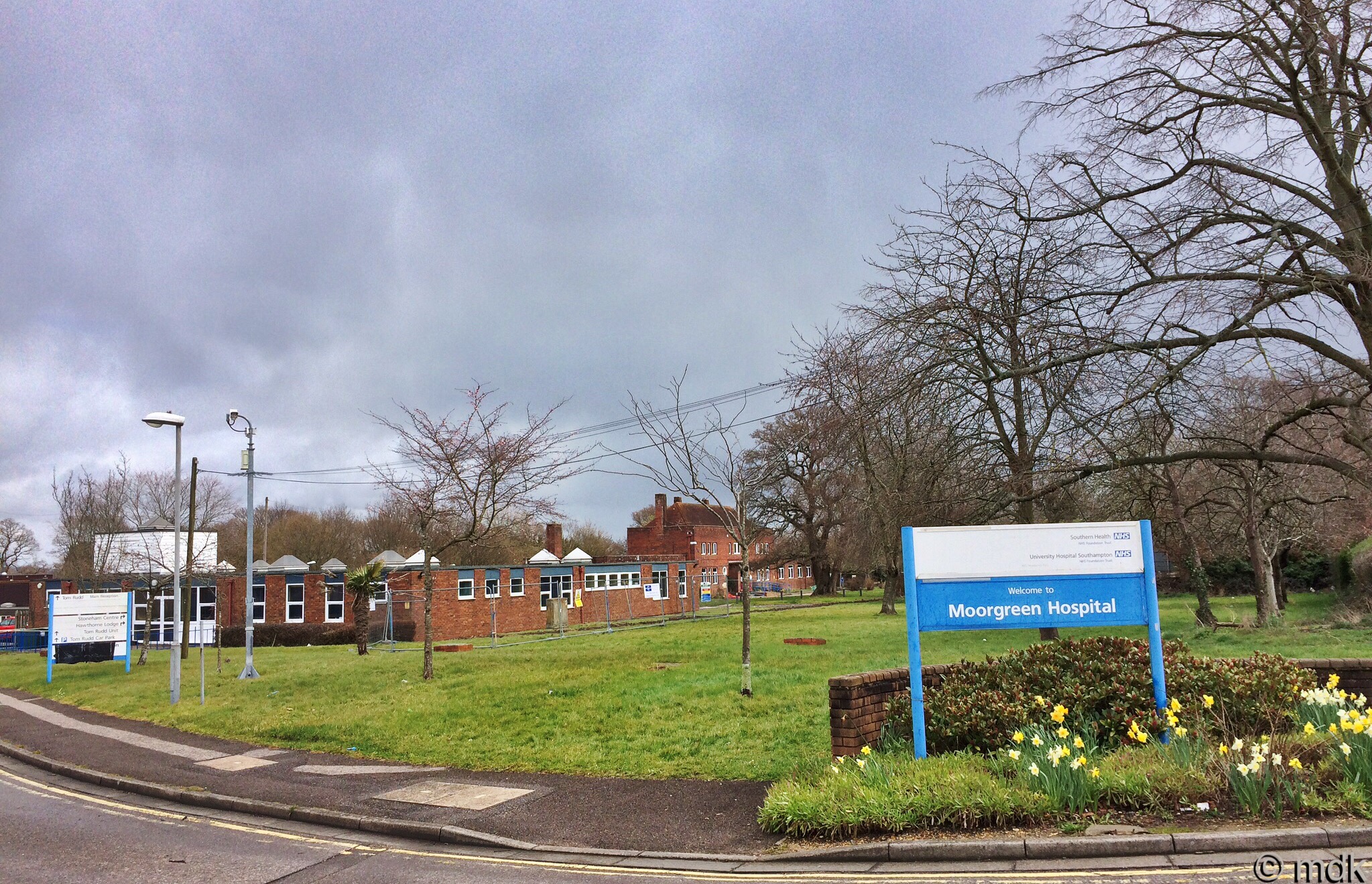 Going to hospital was preferable to going to the workhouse but even so, I’m sure not many people were overjoyed to enter those doors. Somehow the building seemed destined to always be a place of dread and, in 1977, when it became Countess Mountbatten House, the UK’s second NHS palliative care hospice, this was compounded. Being sent to Moorgreen was, quite literally, a death sentence. 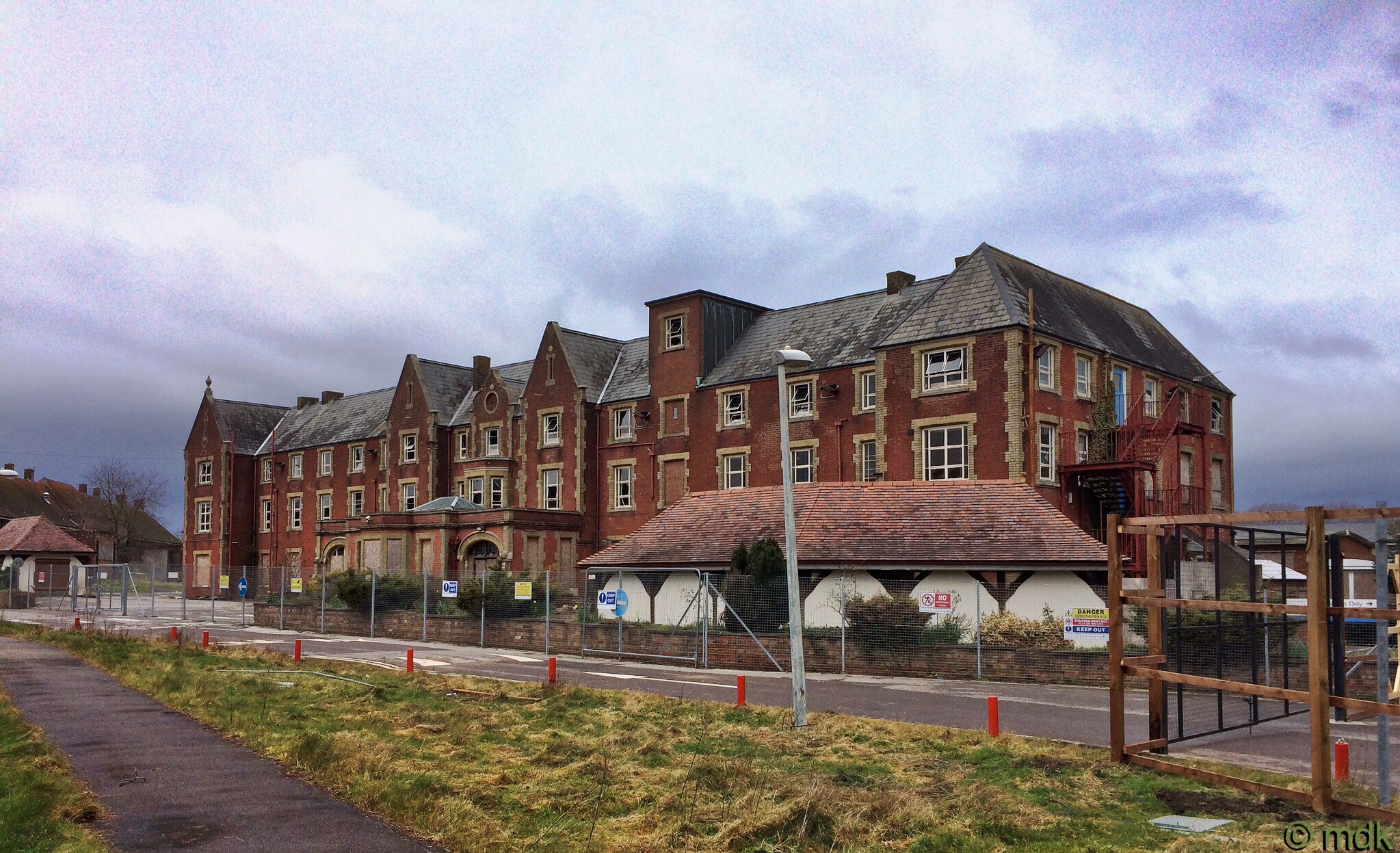 Standing in front of this derelict building with its rusting fire escape and broken or boarded up windows and doors I wasn’t sure whether I was glad it was being pulled down or sad to see it go. The sight of it certainly fills me with a deep sadness. This was Mother’s last home and I can’t think of it without remembering her last few months. 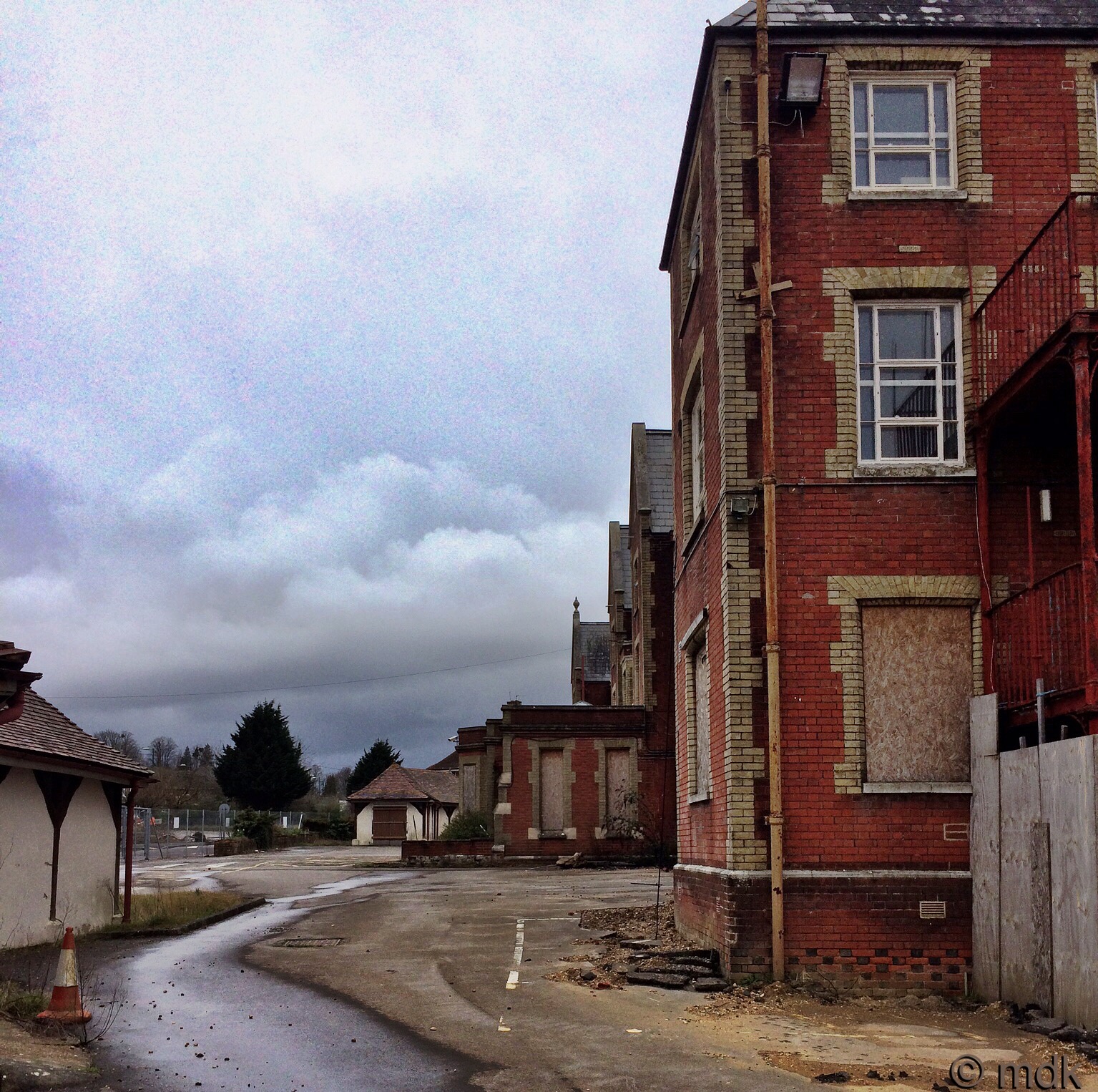 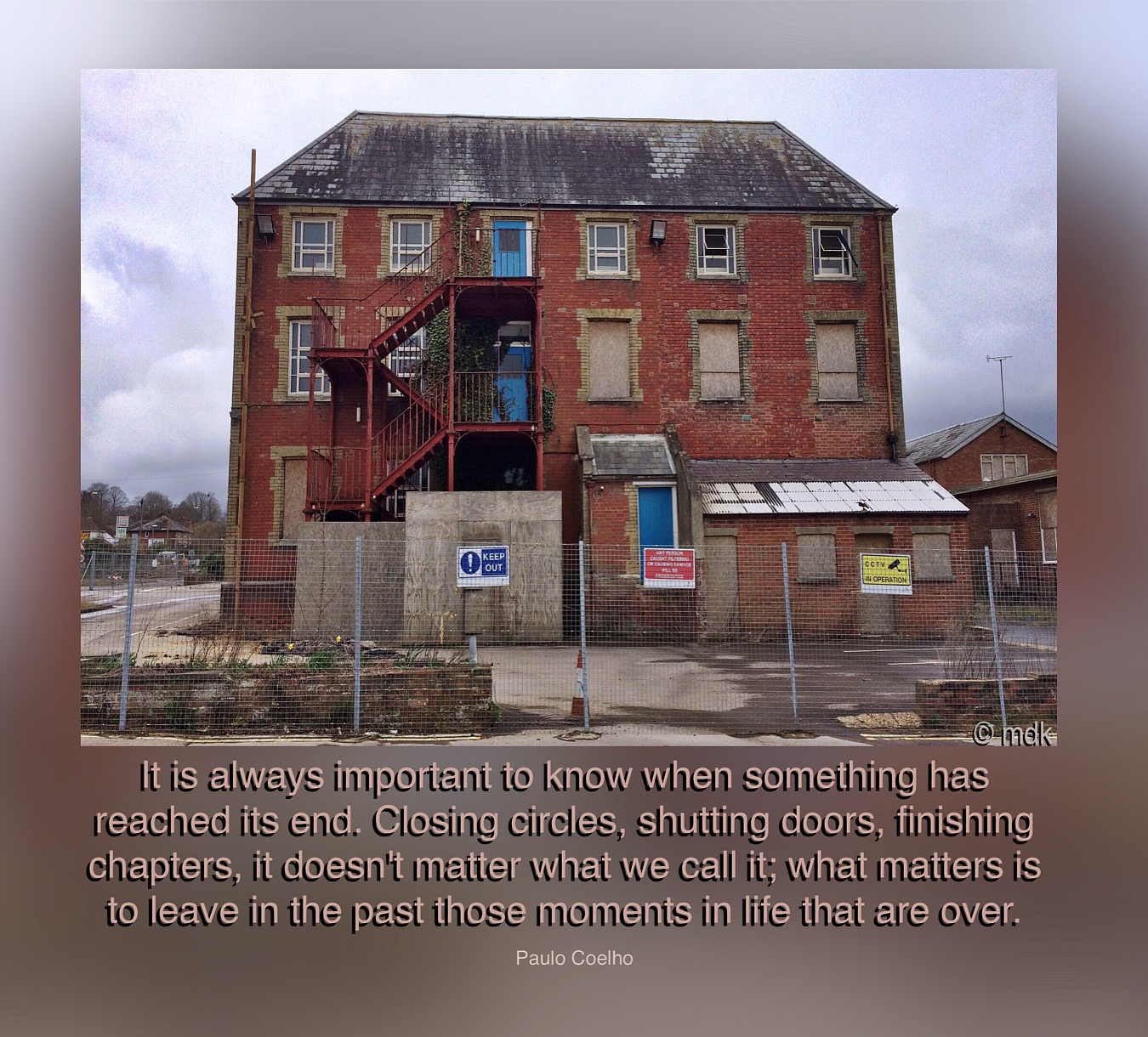 There is a certain irony in her ending her days there. Mother was a woman who came from grinding poverty. Her father died of TB when she was young and she lived in a big house in Basset, shared with many other families. It was, she said, alive with cockroaches but one step up from the workhouse at least. When she herself was widowed she was left in similar circumstances. She had a young child, a father in law living with her and a mortgage to pay.

Mother worked hard all her life. Not long after she retired she was diagnosed with cancer. At first we thought she’d beaten it but, in her late sixties, it came back with a vengeance. She fought hard but it was always going to be a losing battle and we all knew it, even if we didn’t want to admit it. A few months before she died she went to live in Netley Castle. In terms of accommodation it was her finest hour. It was hard to believe my poor widowed mother, without two pennies to rub together was living in a fairytale castle by the sea.

In late 1989, not long before CJ was born, she moved from the castle to the workhouse, a place she seemed to have been narrowly avoiding all her life. In fairness, it was far warmer than the castle and better equipped. The staff were wonderful, always smiling and cheerful despite dealing with death on an everyday basis. Even so, it was hard to see her there and watch her slowly deteriorate.

Every time we visited the nurses told us they couldn’t understand how she was still clinging to life but she did. She lived long enough to know CJ had been born although I wasn’t allowed to take him to see her for several weeks because she had a chest infection and they were worried he would catch it. Perhaps it was her desperation to see her youngest grandson that pulled her through because, against the odds, she beat that, if not the cancer. She saw CJ once, when he was around six weeks old. Several times I got the call to say the time had come and dashed to be there only to find her sitting up in bed chirpy as ever. My last visit is one I struggle to forget. Her hair, always permed and dyed to hide the grey, had grown out, her face was pale and without makeup and she seemed confused. She was convinced Commando’s mum had visited her, although we knew she hadn’t. When I put my handbag down on an empty chair she thought I’d brought my black cat, Pippin, to see her. It was painful to watch her so stubbornly clinging to a life that seemed nothing but suffering.

The last time I got a call I didn’t go. Commando was at work, Philo and Bard were at school and I had no one to look after CJ at such short notice. Besides, it was probably a false alarm. At least that was what I told myself. In truth I was afraid to go. I couldn’t bear to watch her die. It is a lasting regret. Alex, who is far braver than I, was with her at the end but I can’t help worrying that she held on, waiting for me. So today I stood in front of that crumbling old building with the rain starting to fall and I cried. Then, with a whisper of ‘I’m sorry Mum,’ I turned a walked away knowing I was seeing it for the very last time.