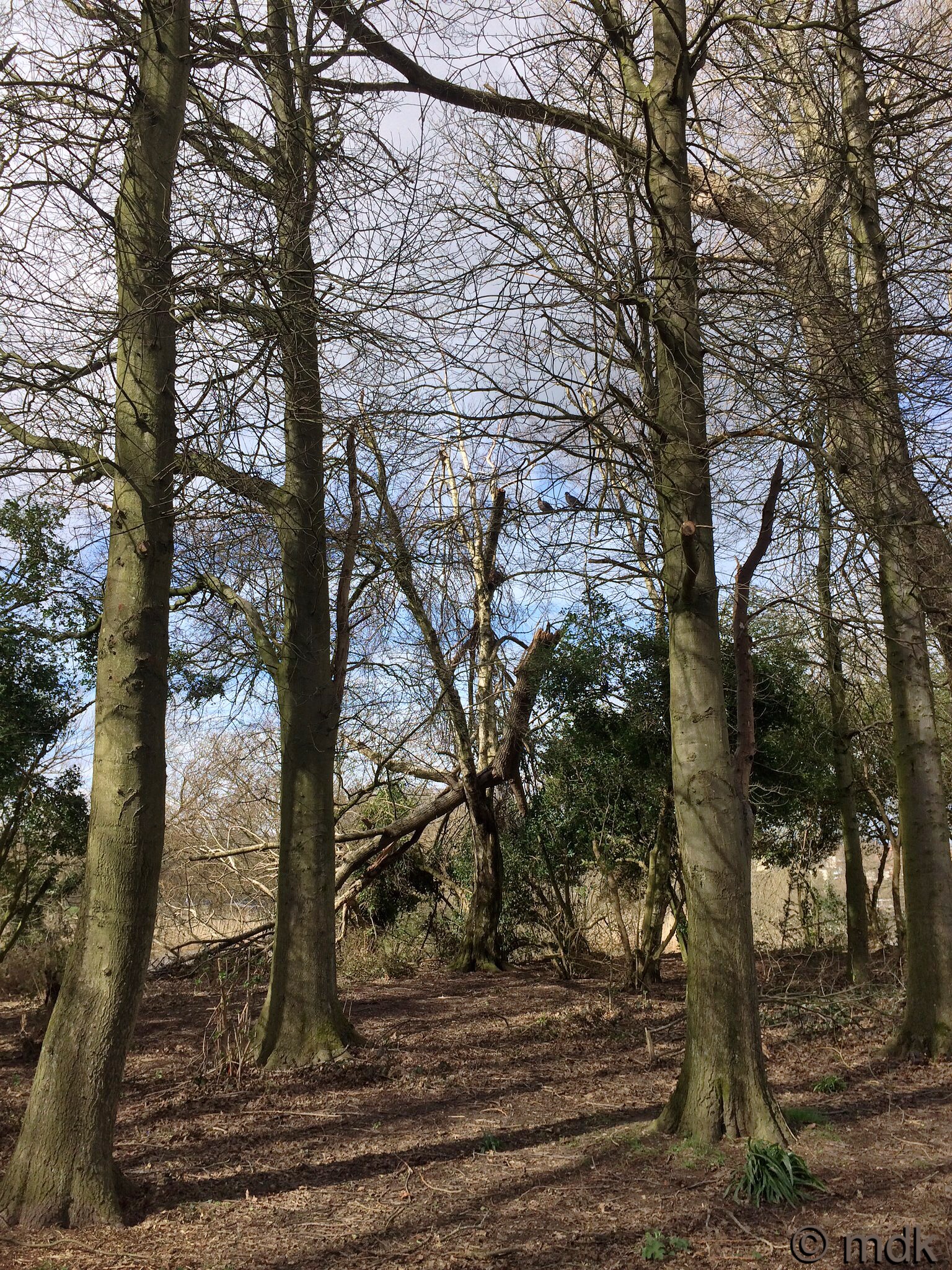 “Just a little further,” CJ said, still looking at the pigeons surveying the storm damage. Usually that’s my line and I wasn’t sure of the wisdom of going much further when the storm seemed to be gathering all around us. “I’d like to see the greylag geese.”
Despite my misgivings, we carried on. Maybe our luck would hold. If not I could blame CJ, although that wouldn’t be much use when we were both soaking wet. Oddly, the sky over Portswood, where it had been black and dropping rain earlier, was now blue, probably because this black clouds were now in front of us. 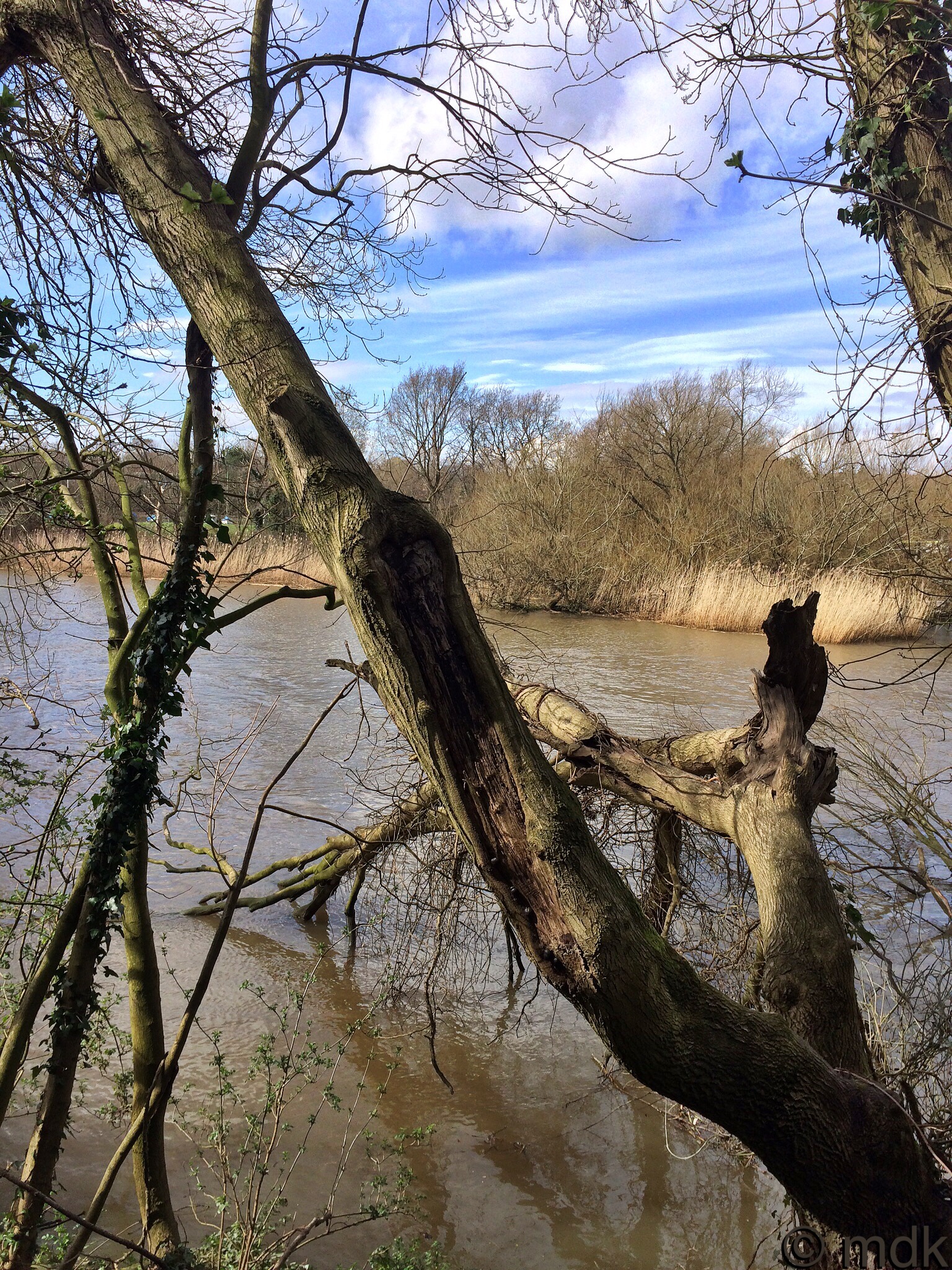 A little way on a branch the size of a tree had come down. It was facing the river and the inside was blackened. CJ was convinced it had been struck by lightning and wanted a closer look. Dramatic as Storm Katie had been I didn’t remember hearing any thunder or seeing any flashes so I was sceptical. When we got to it the blackness was just mud and rot. This poor tree had obviously already been damaged and the storm had just finished the job. CJ was disappointed. 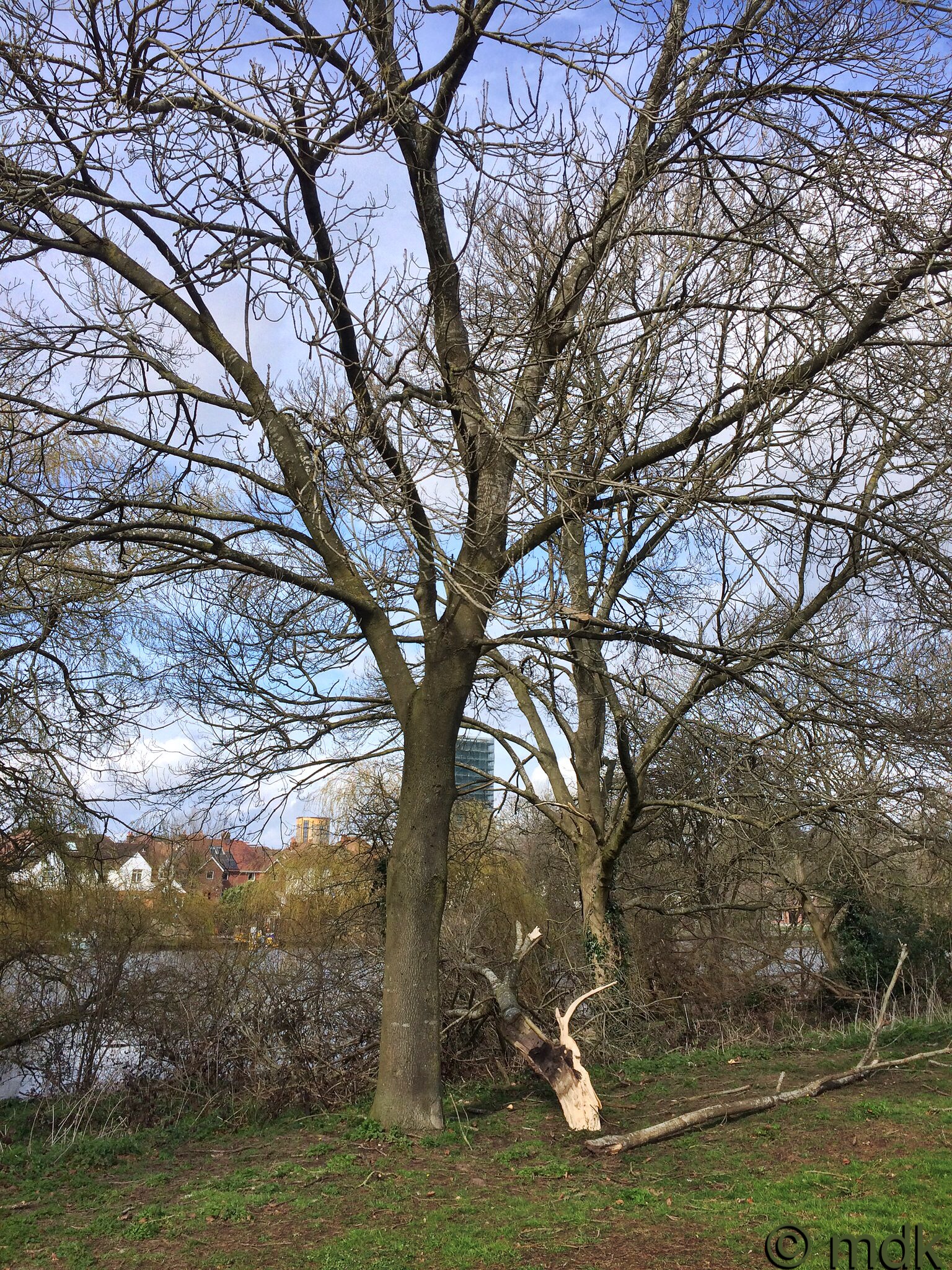 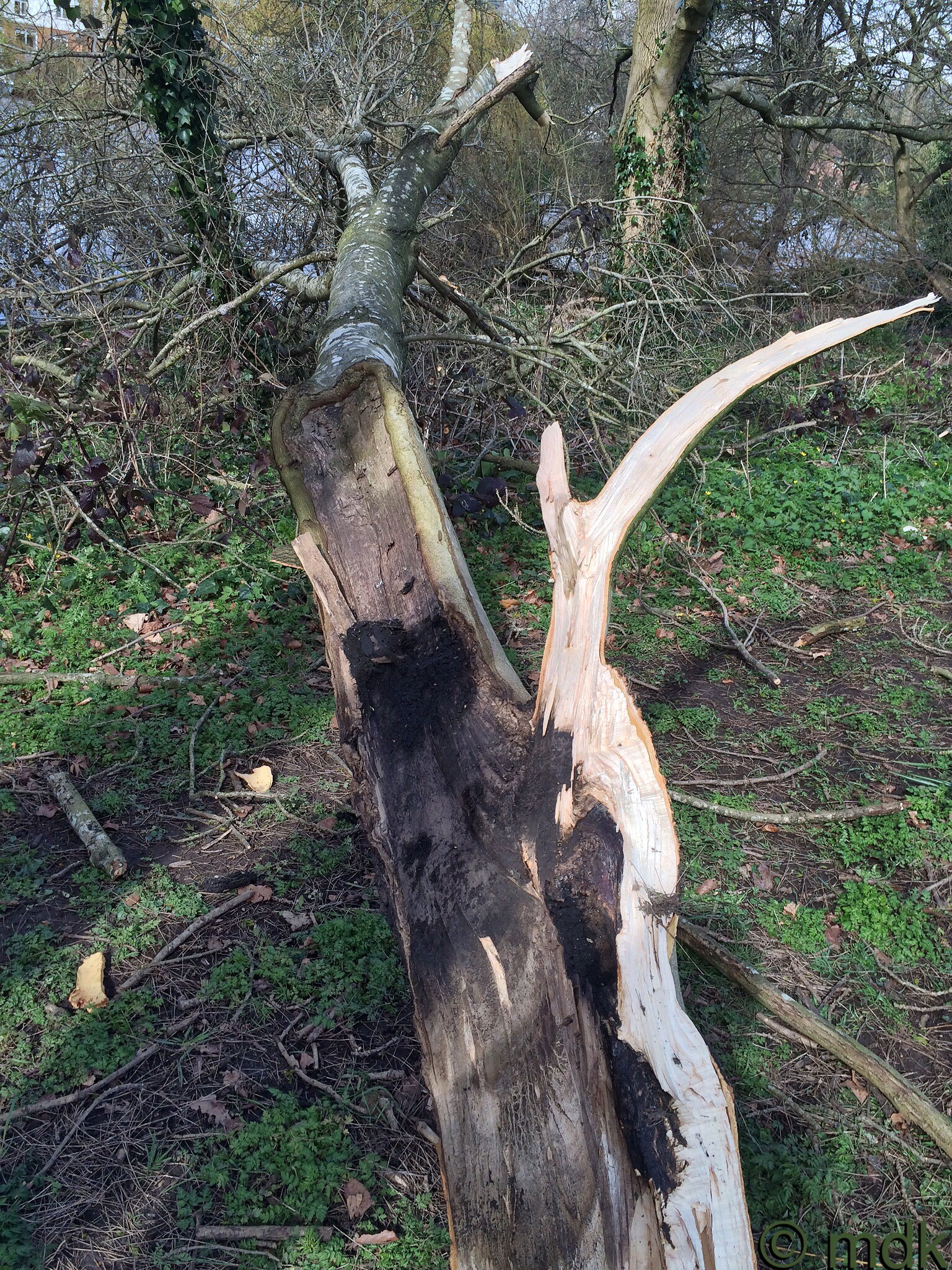 We looked around to see if we could see the tree it had come from but it was like looking for a needle in a haystack, so many of the trees had missing limbs who knew which was recent? Then CJ found a massive chunk of bark on the ground. It must have come from the not lightening tree. He picked it up. It was bigger than his head and a good half inch thick. The inside was  beautiful, I stood admiring and stroking its silky smooth surface. 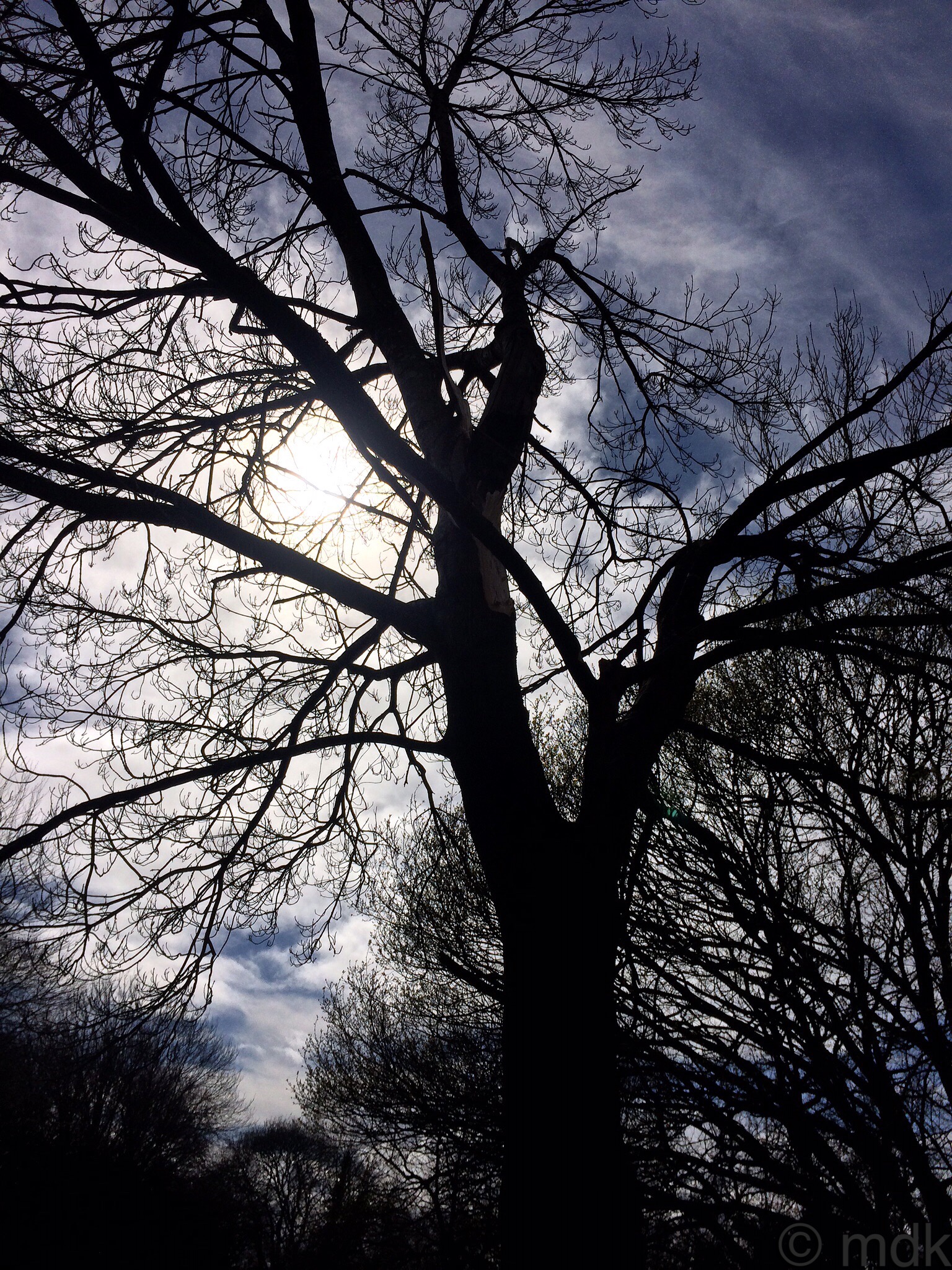 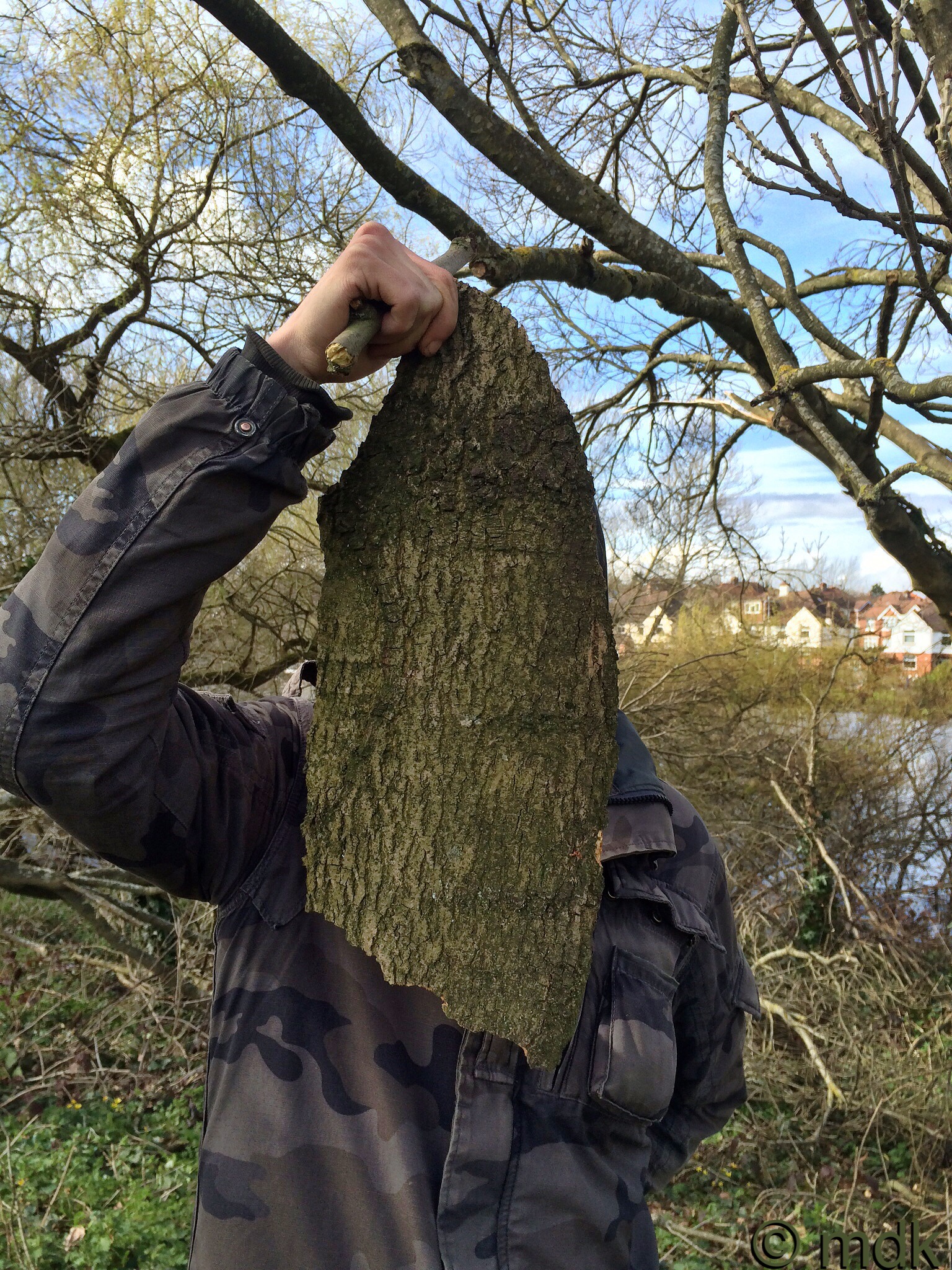 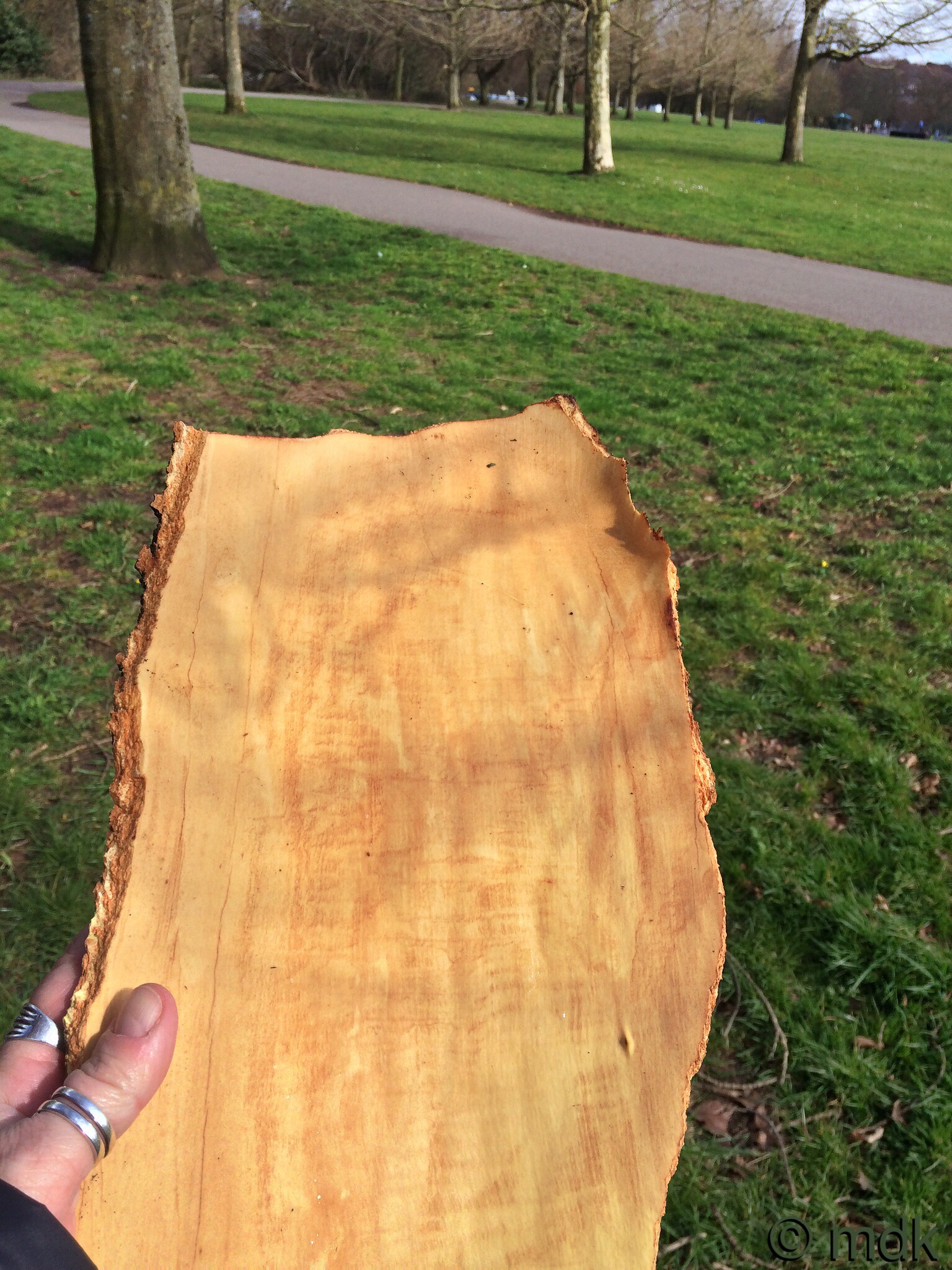 The sky behind Woodmill was blue too but there were no greylags on the path across the road. We walked on a little way to see if they were further on and found them hunched on the far bank.
“Let’s just stop for a while and see if we can tempt them across,” CJ said.
So we sat on a bench and CJ lobbed duck food in the general direction of the river. Most of it landed on the path. The greylags looked on, totally disinterested. All we managed to do was attract a coot. He paddled frantically against the current trying to snap up the pellets as they drifted towards him. 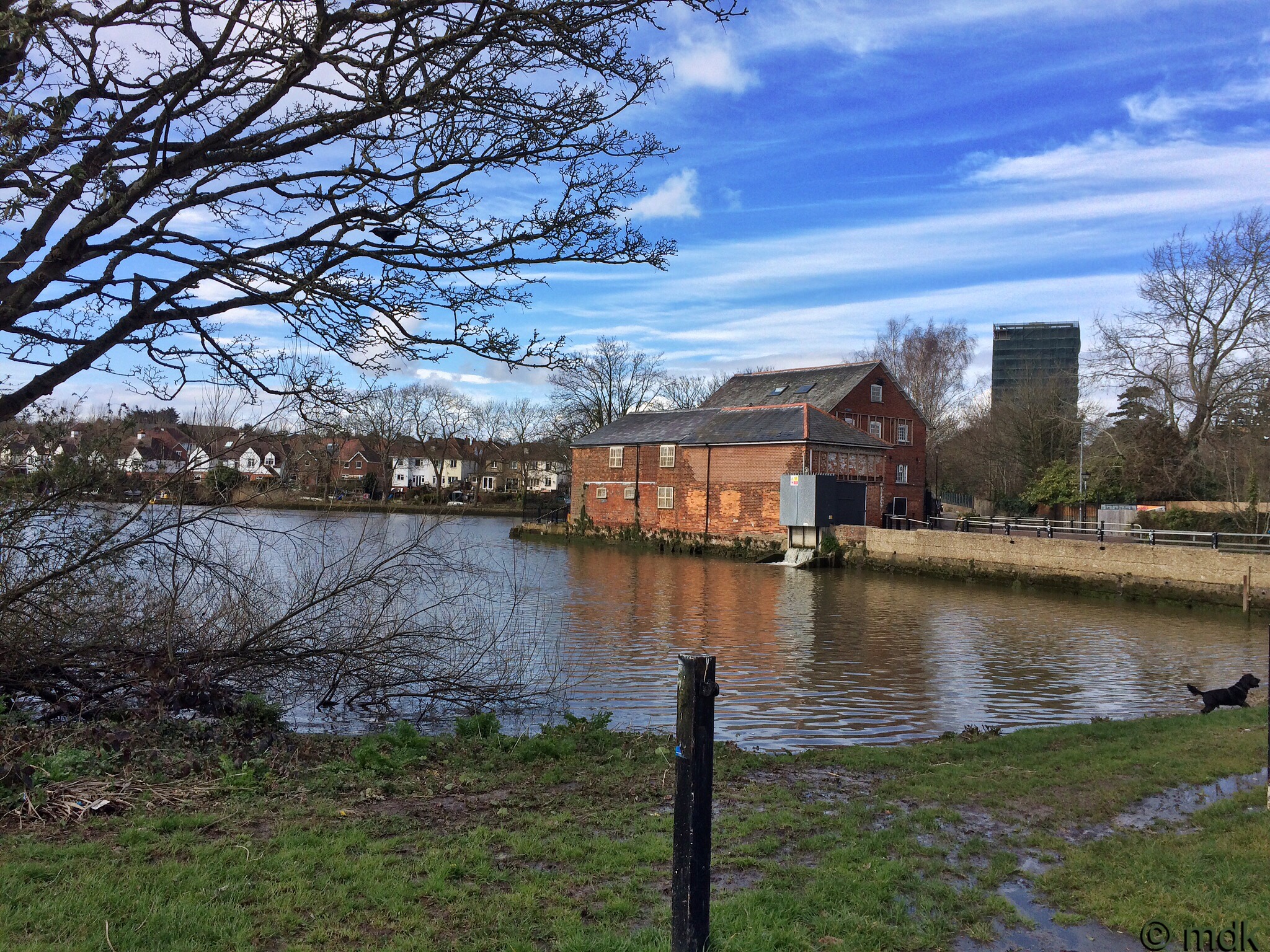 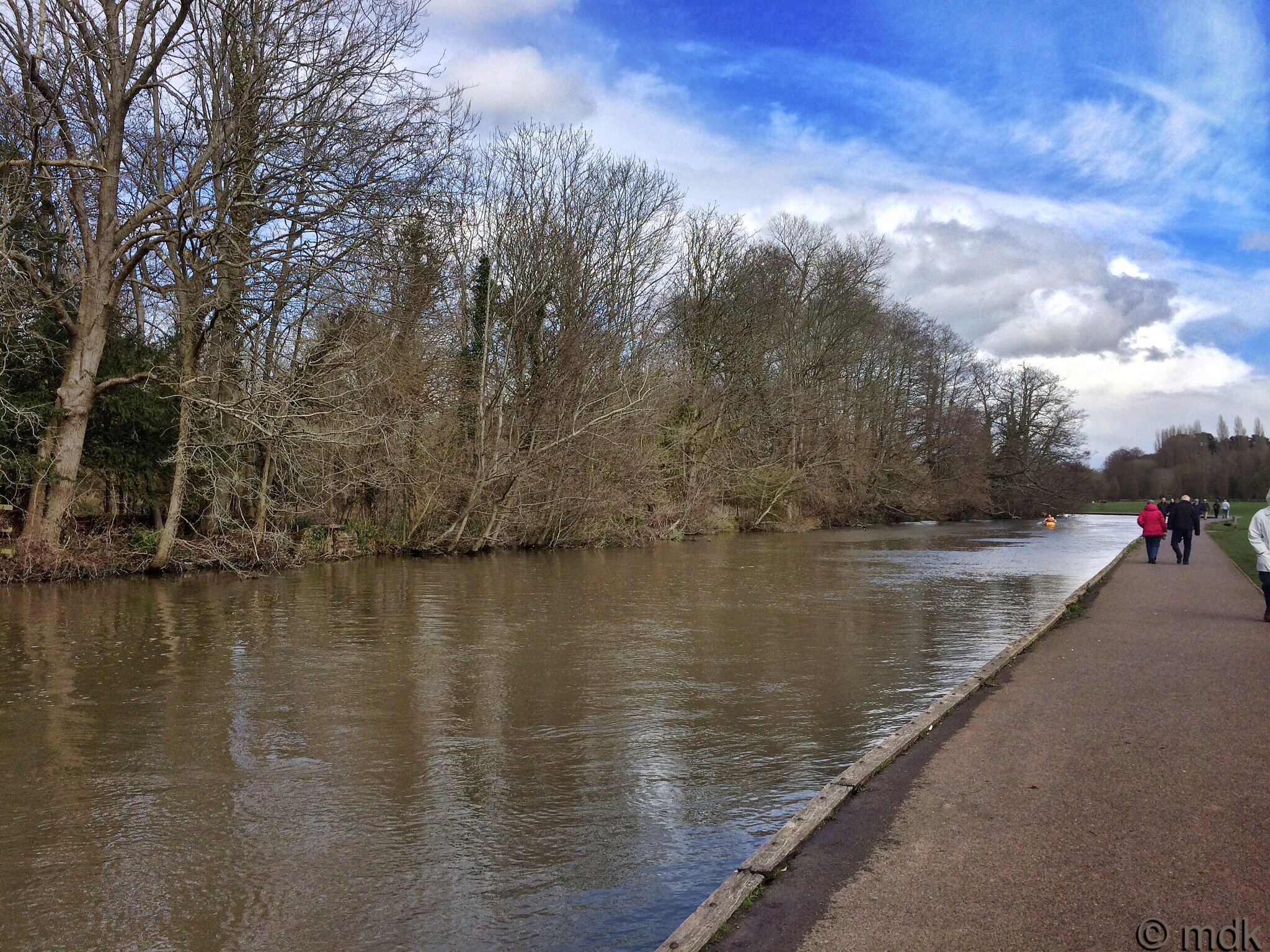 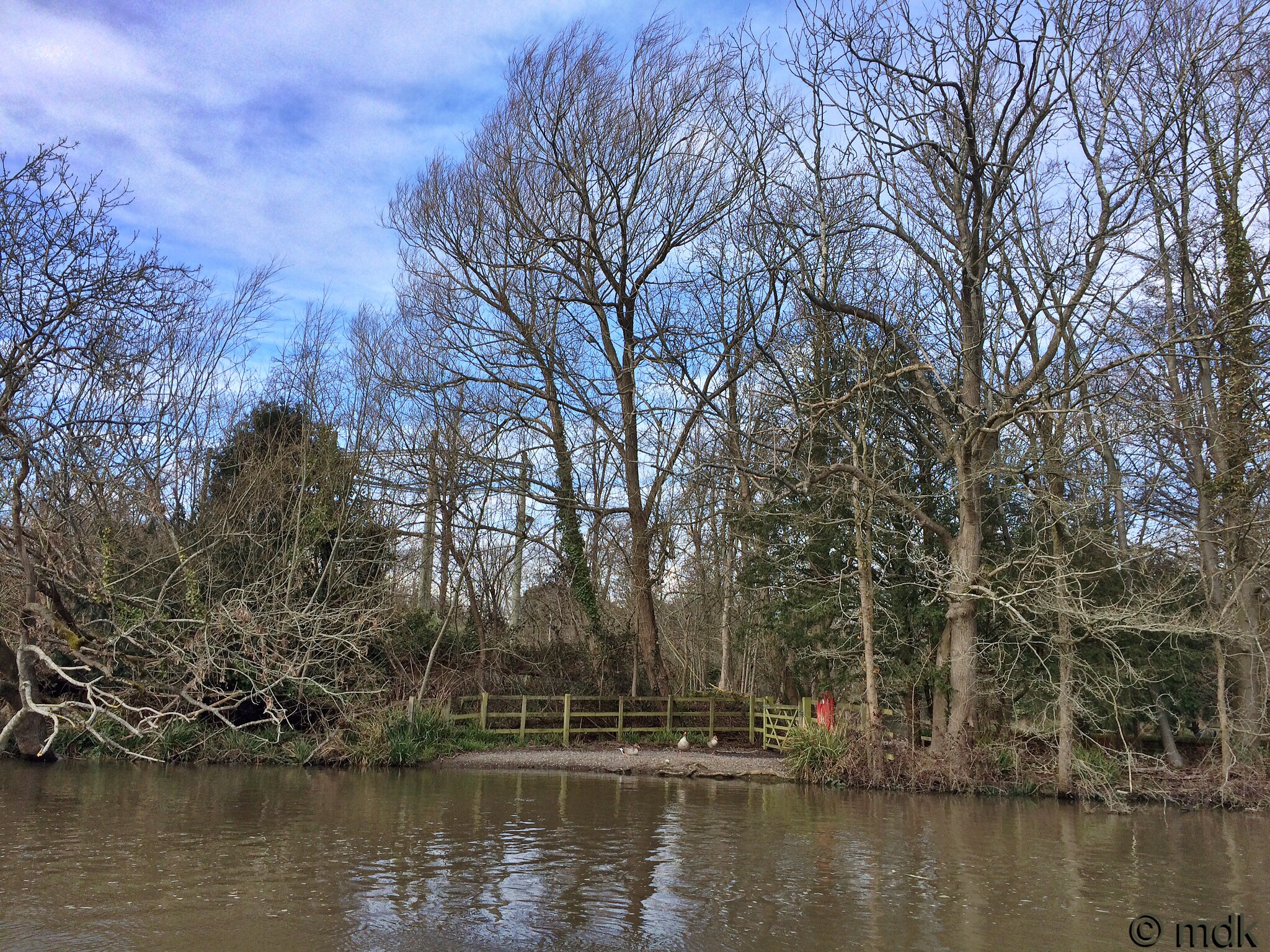 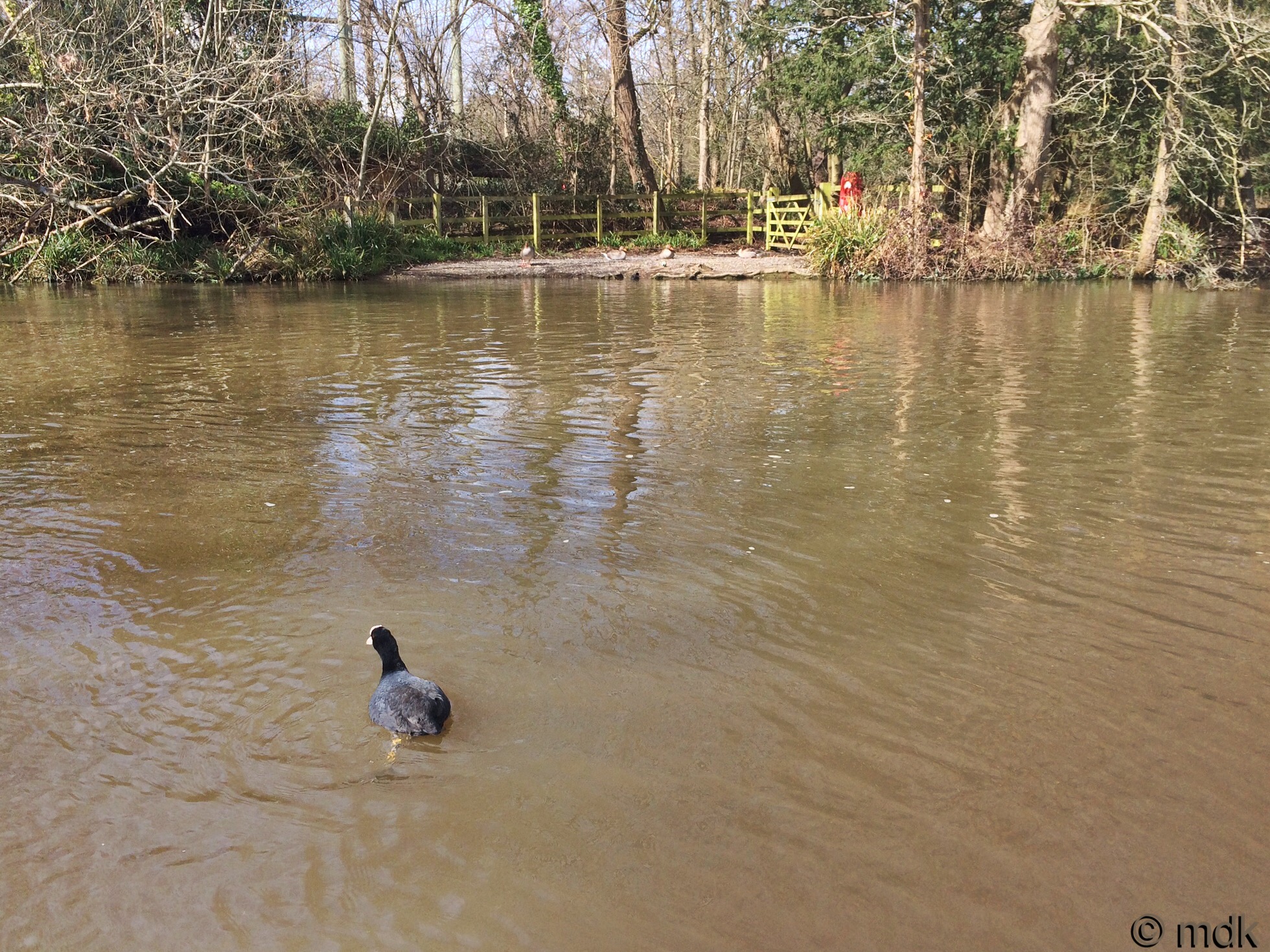 A man in a bright yellow canoe came paddling past while we sat there. As he was going down river he didn’t have to paddle too hard but he looked to be enjoying himself. He might feel differently on the way back, the current was strong. The greylags watched him with more interest than they’d shown for our swan and duck pellets. Perhaps geese don’t like them after all and we should have brought bread? 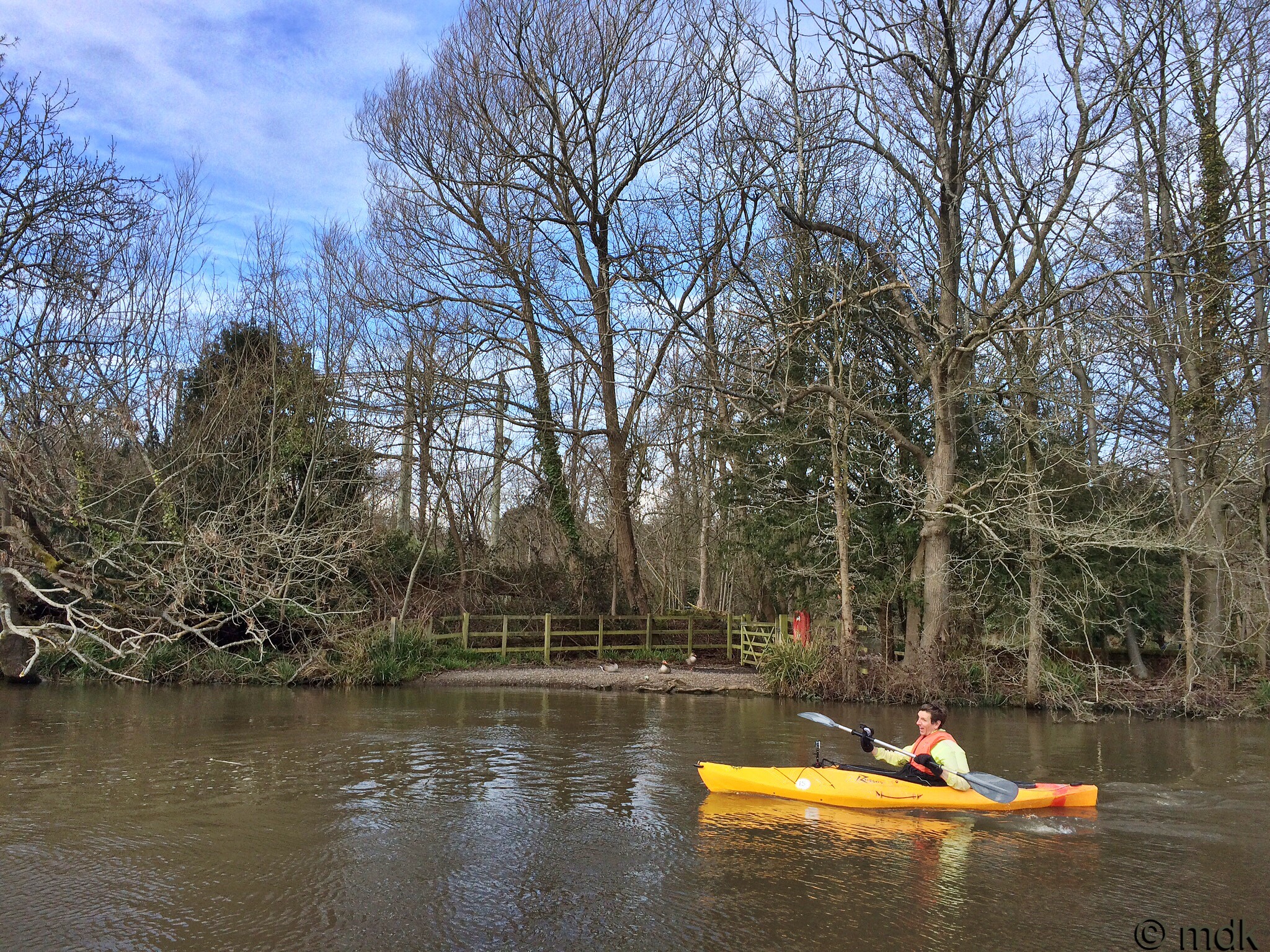 Pretty soon I became bored with just sitting. I’m not sure how the fishermen do it all day, I’d far rather be moving. Besides, there was the rain to worry about.
“Shall we turn back now?” I suggested, looking again at the black sky ahead.
CJ had other ideas though. “Let’s go a little further. There might be more geese around the bend.”
A few weeks ago I had seen a large gathering of geese further on so, with some misgivings, I agreed. This was not one of my better decisions.

Around the next river bend all we found were more coots and a tree on the far side of the park along river walk with a large branch down. Miraculously, the ivy clad dead tree the gulls like to perch on was still standing. It’s been there for years, slowly rotting away and I’m always surprised to see it still upright after a storm. The stream that flows off towards the Woodmill Activity Centre grounds was so high it was almost level with the river. Usually it tumbles down like a small weir. 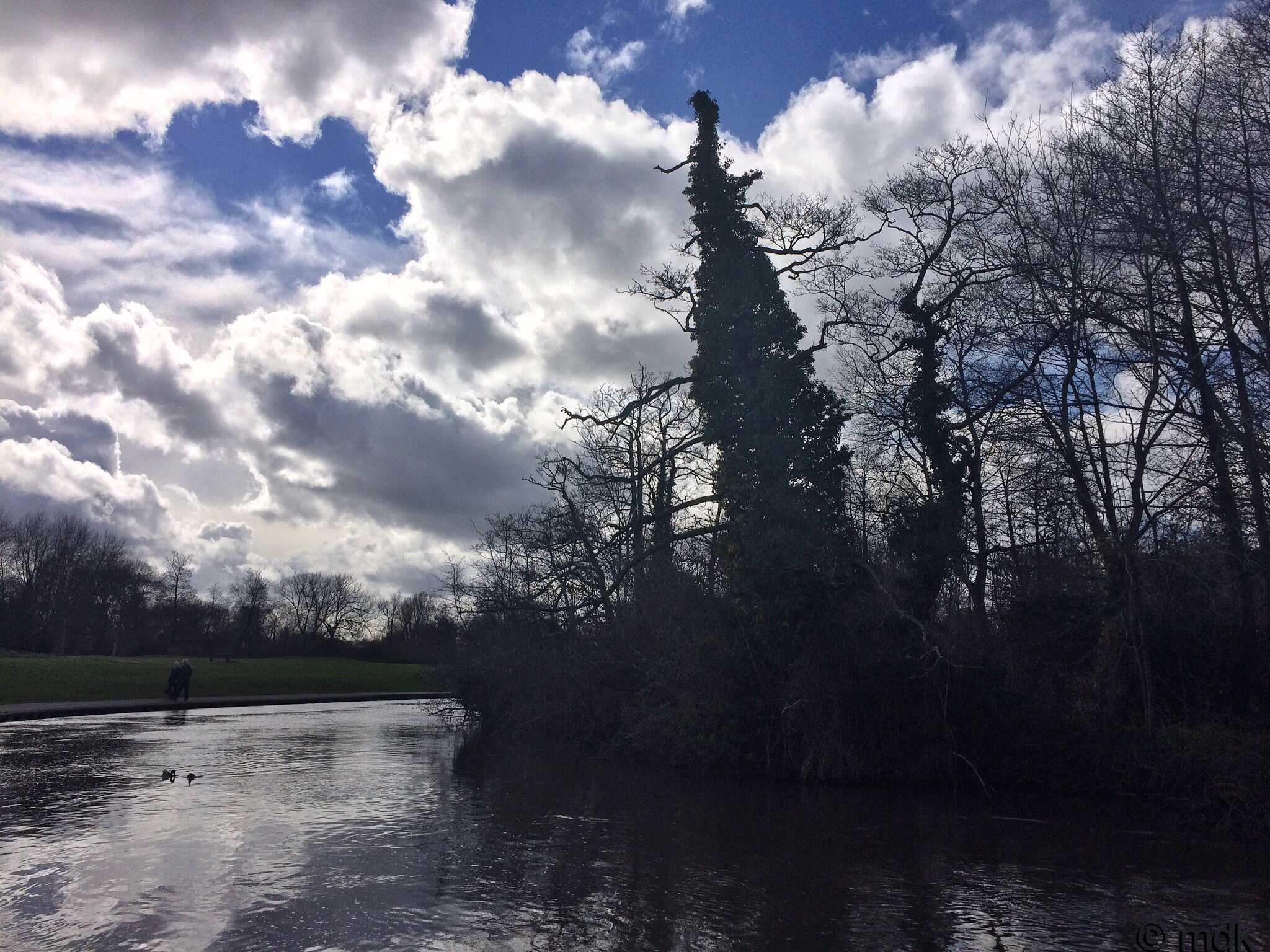 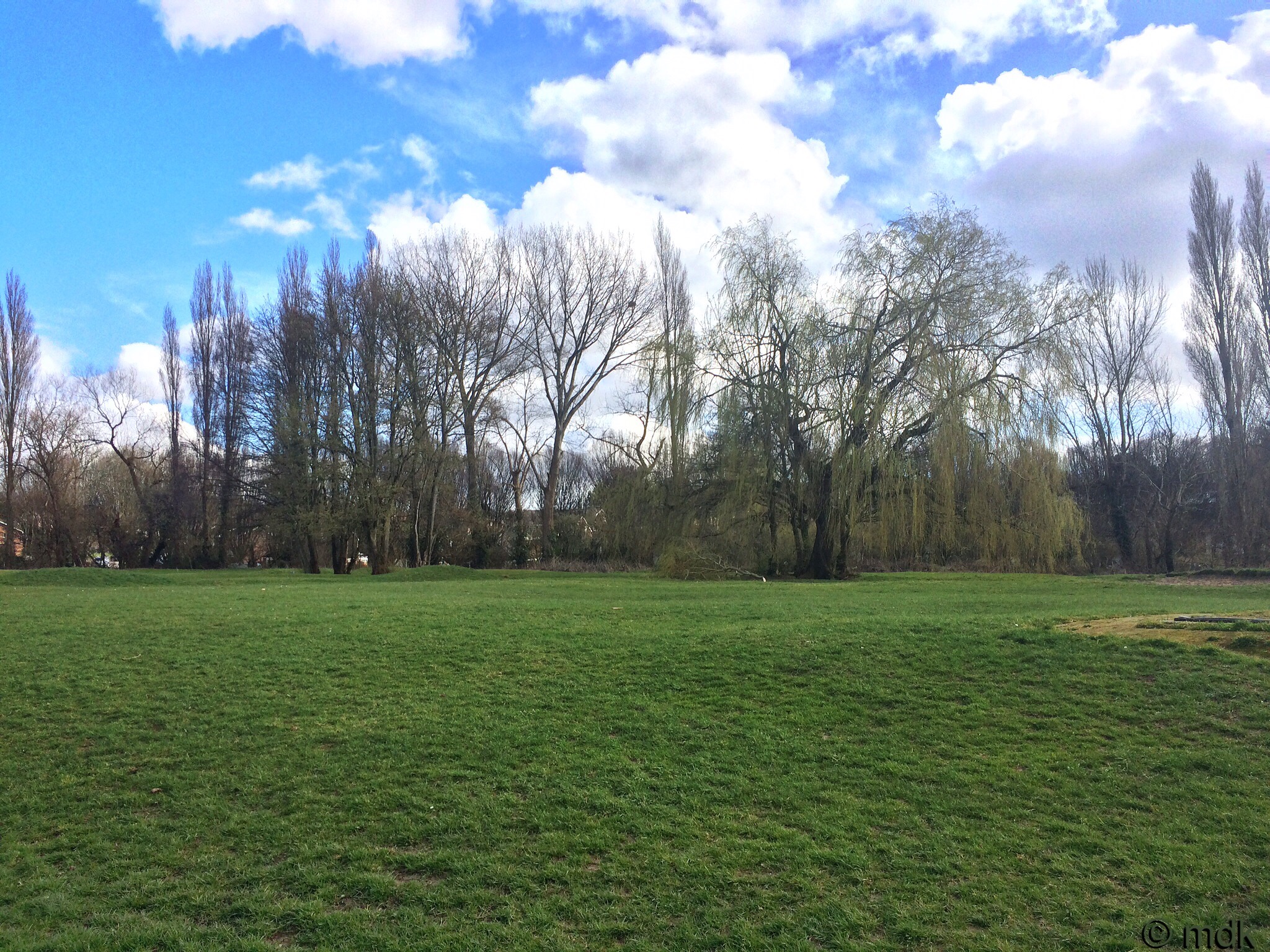 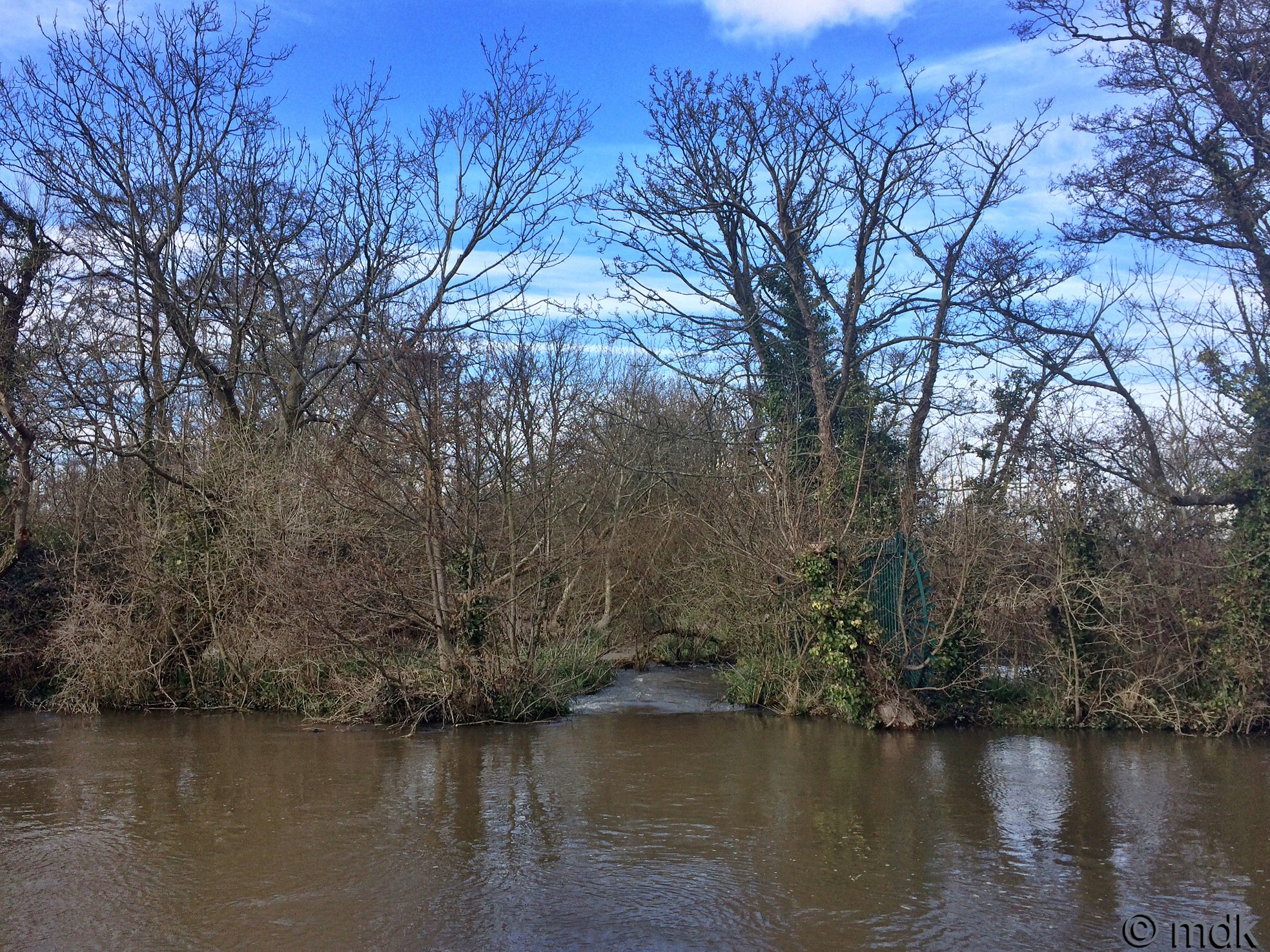 By this time we were close to Mansbridge and I gave CJ one last chance to turn back while the walk home was still shorter in that direction. He declined so I shall blame him for what followed. Not unexpectedly the path was flooded near the bridge. With my boots I walked through easily, CJ in his trainers, didn’t fare so well but it was his idea so if he got wet feet he only had himself to blame. He made a very rude gesture at me when I took a photo of him gingerly crossing the water. 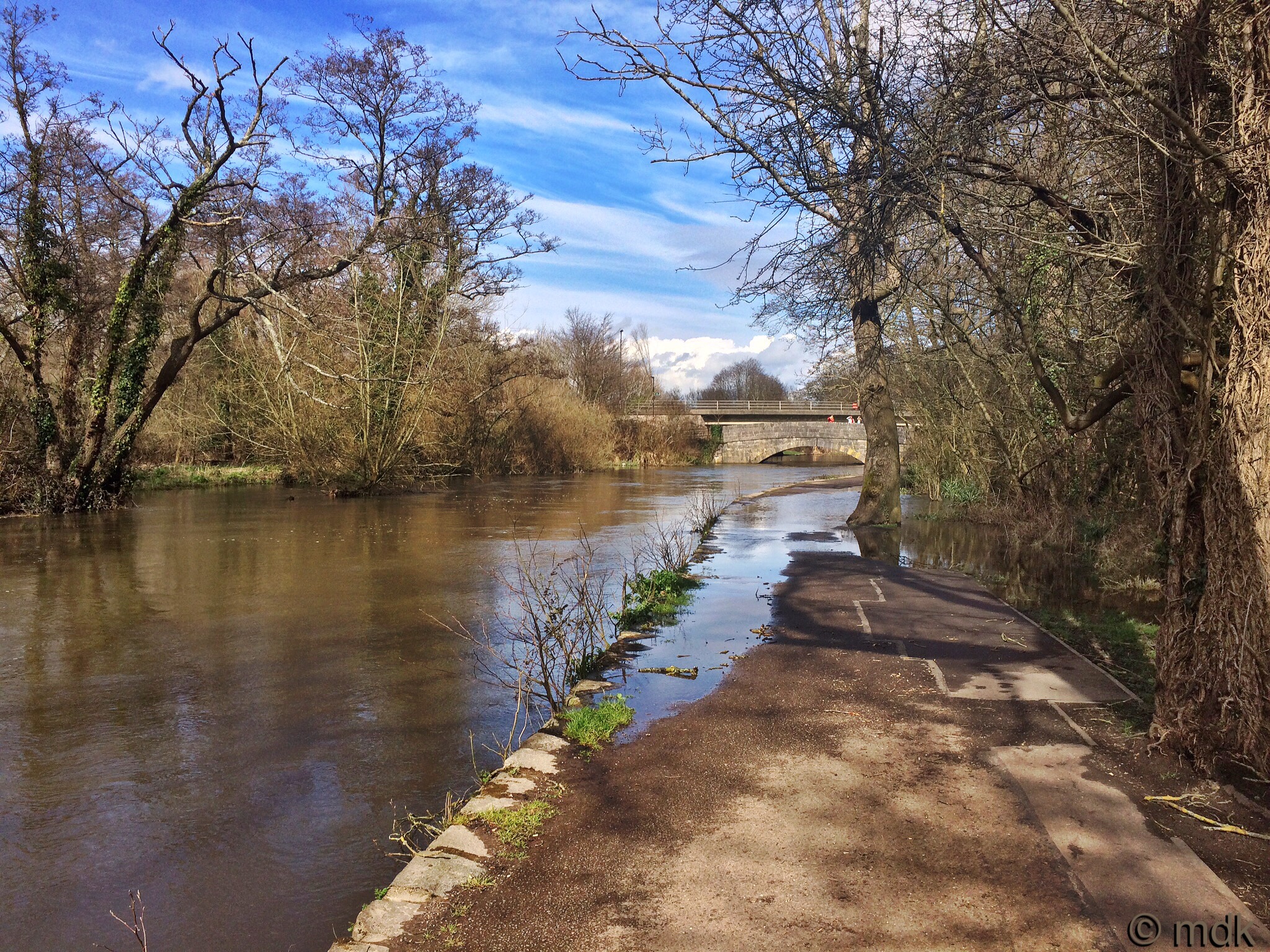 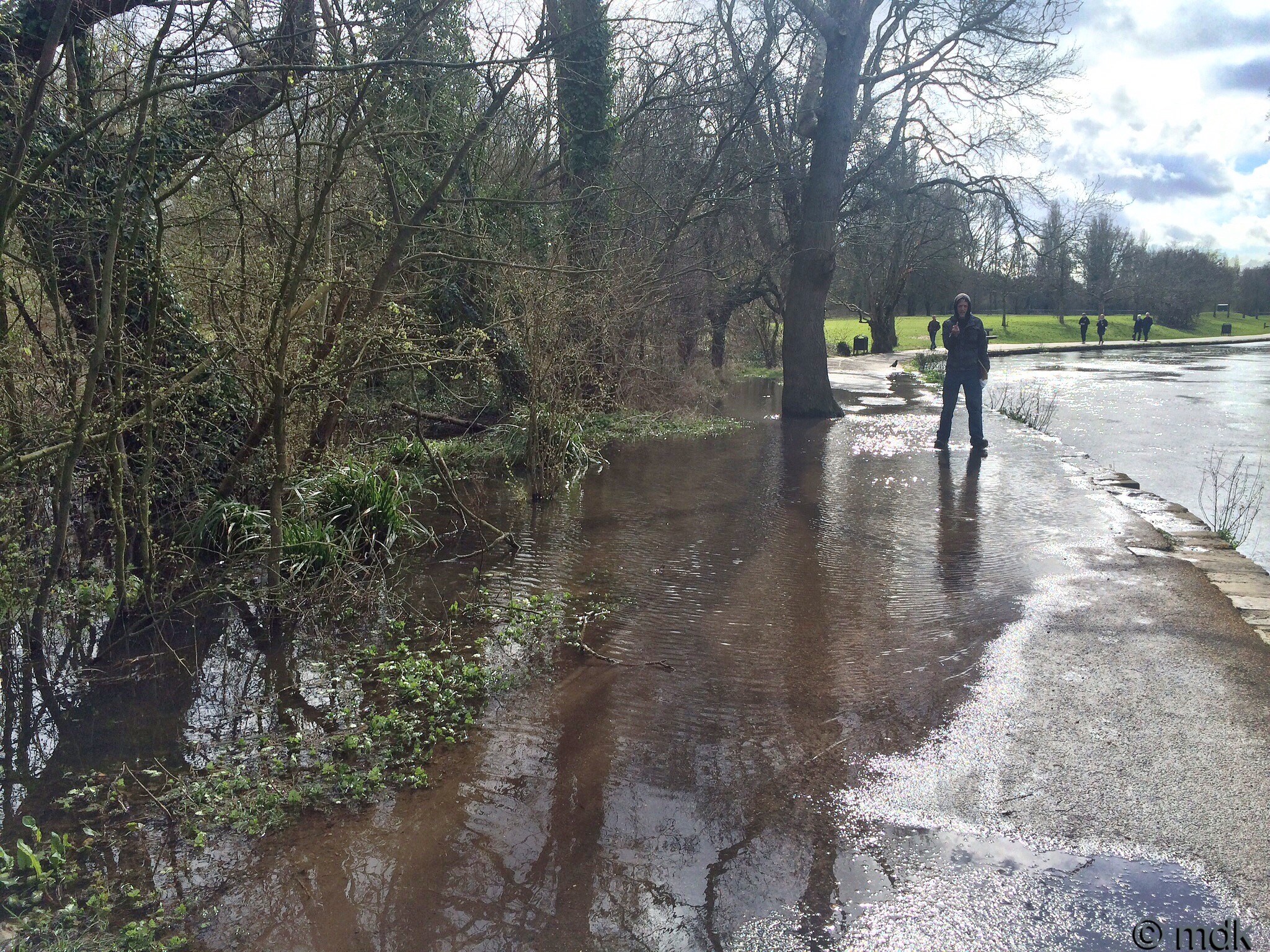 As I’d been wading through the flood, something about the bridge had seemed a little odd but I couldn’t quite place what. When we got to it though it all became clear. The large tree that has stood on the grass just behind the bridge for as long as I can remember was gone. It had been cut rather than fallen and all that was left was a stump and a pile of logs on the opposite side of the path. Perhaps the storm had damaged it beyond salvage but it was sad to see all the same. Storms like Kate change the landscape and I suppose that is the way of nature but it doesn’t make it any easier to stomach when such a beautiful tree meets its end. 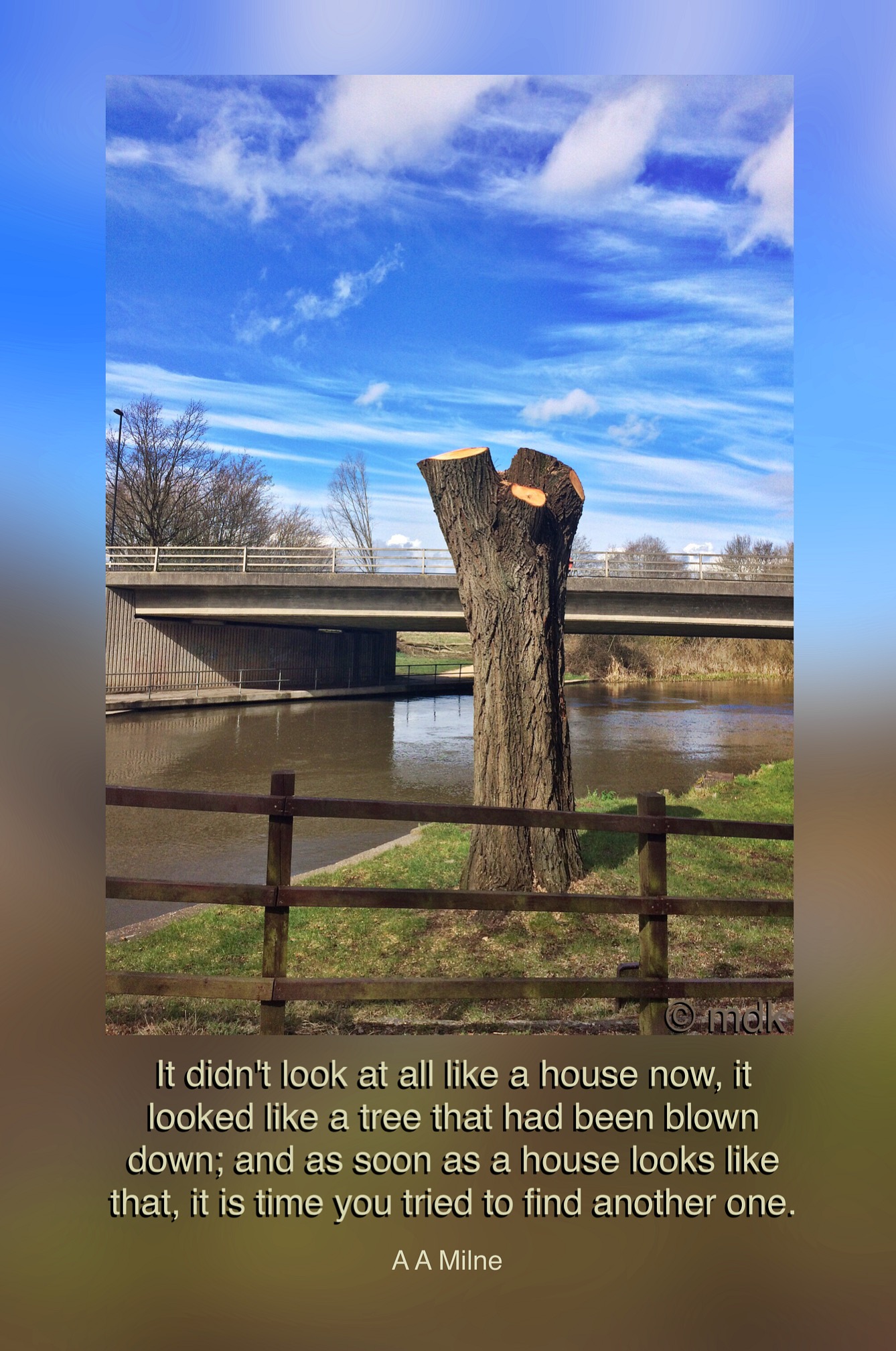 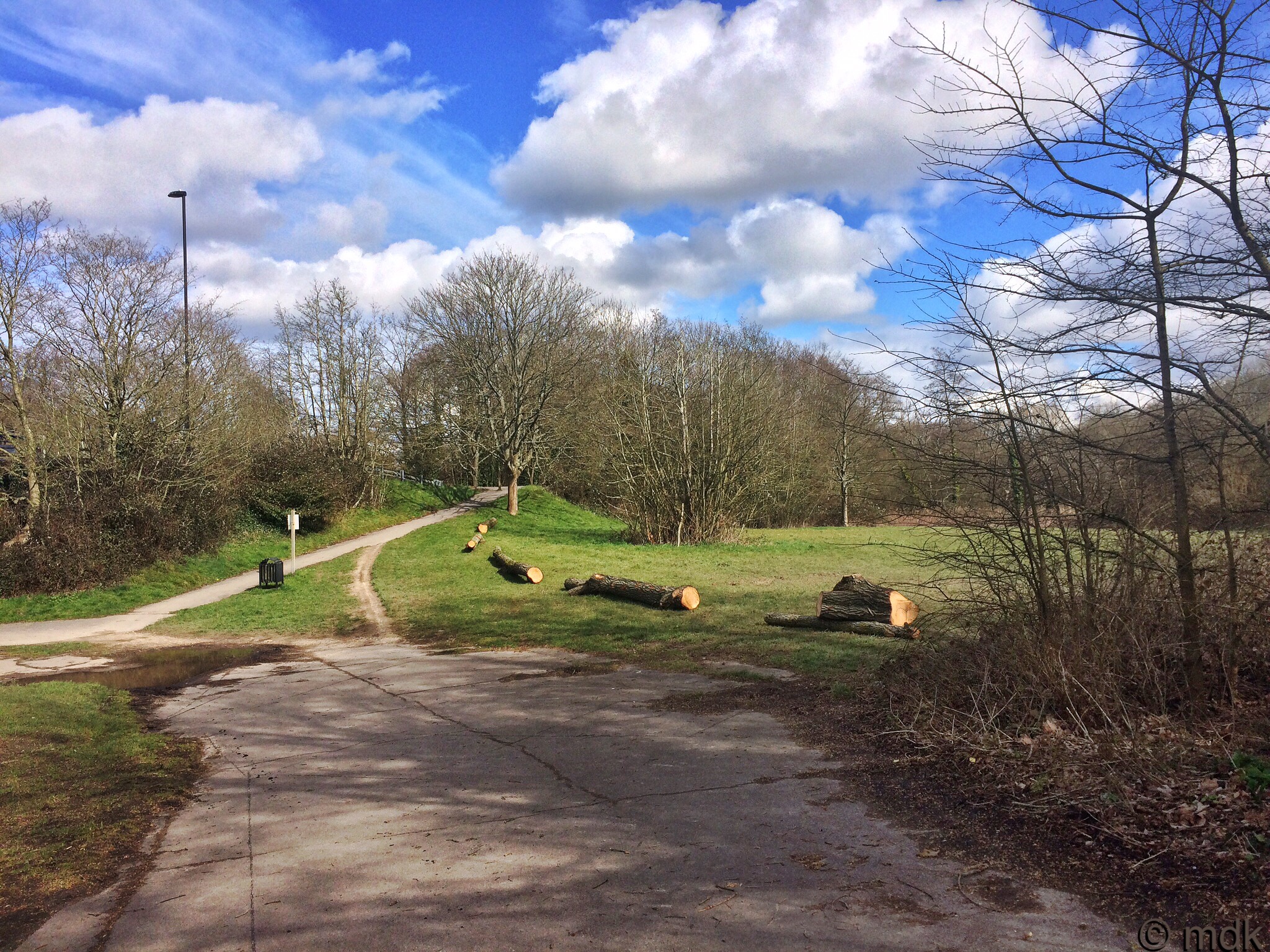 This was by far the worst damage we’d seen, although, from the news we knew a lot more trees had been lost. A large tree fell at Beaulieu and I’d seen pictures of trees embedded in cars and houses. Thank goodness this one didn’t damage the bridge. Given how long they took to replace the one at Withymead it could have been a long time before we could cross the river here if it had.

The trees beside the White Swan all seemed to be intact and, although the car park was a little flooded, the pub was open. There were people outside drinking and a canoe pulled up onto the path. Further on a trailer had been abandoned at the side of the road, one wheel hanging off. Whether this had anything to do with the storm or not remains to be seen but I suddenly found One Wheel On My Waggon going through my head. 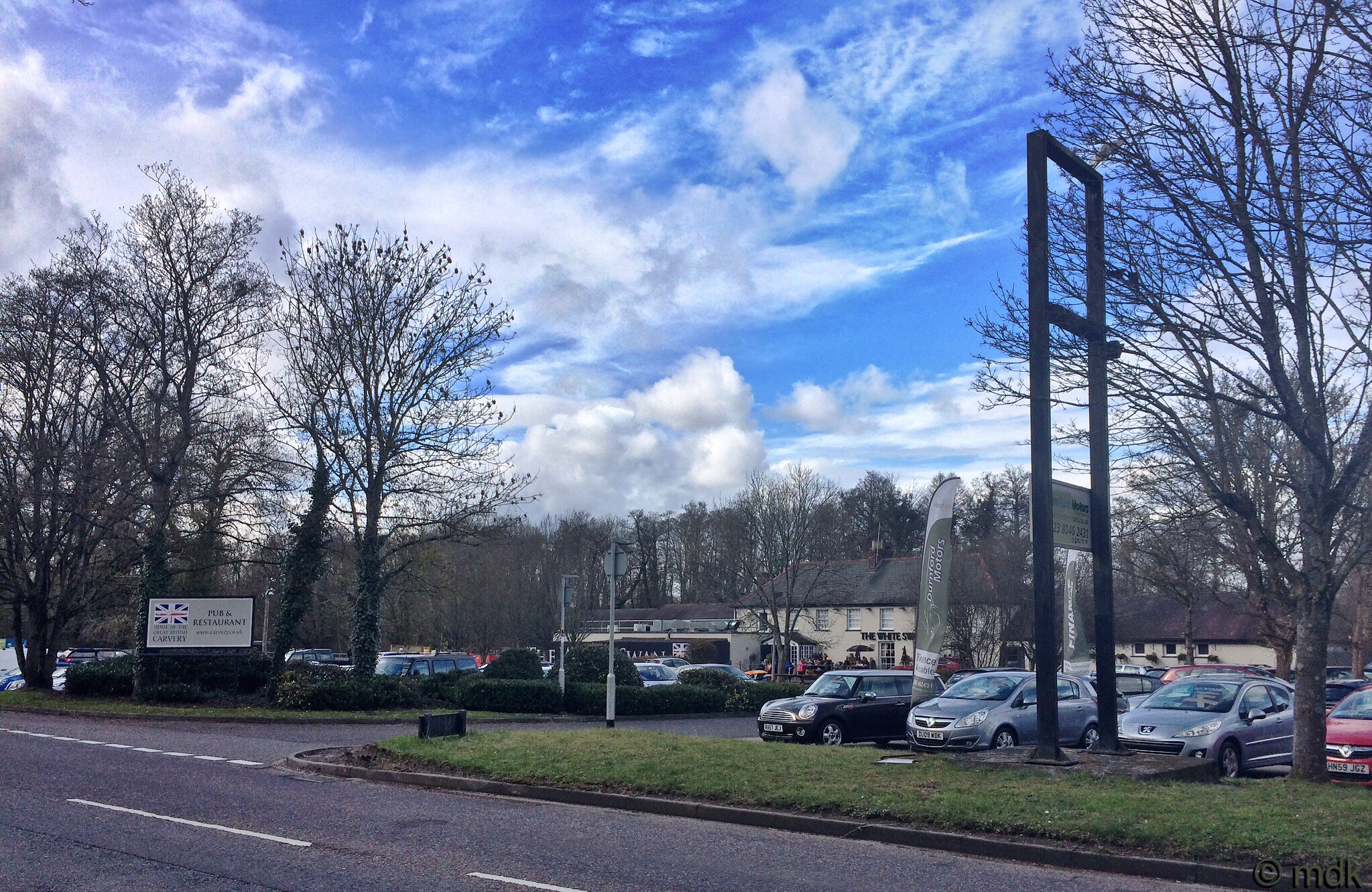 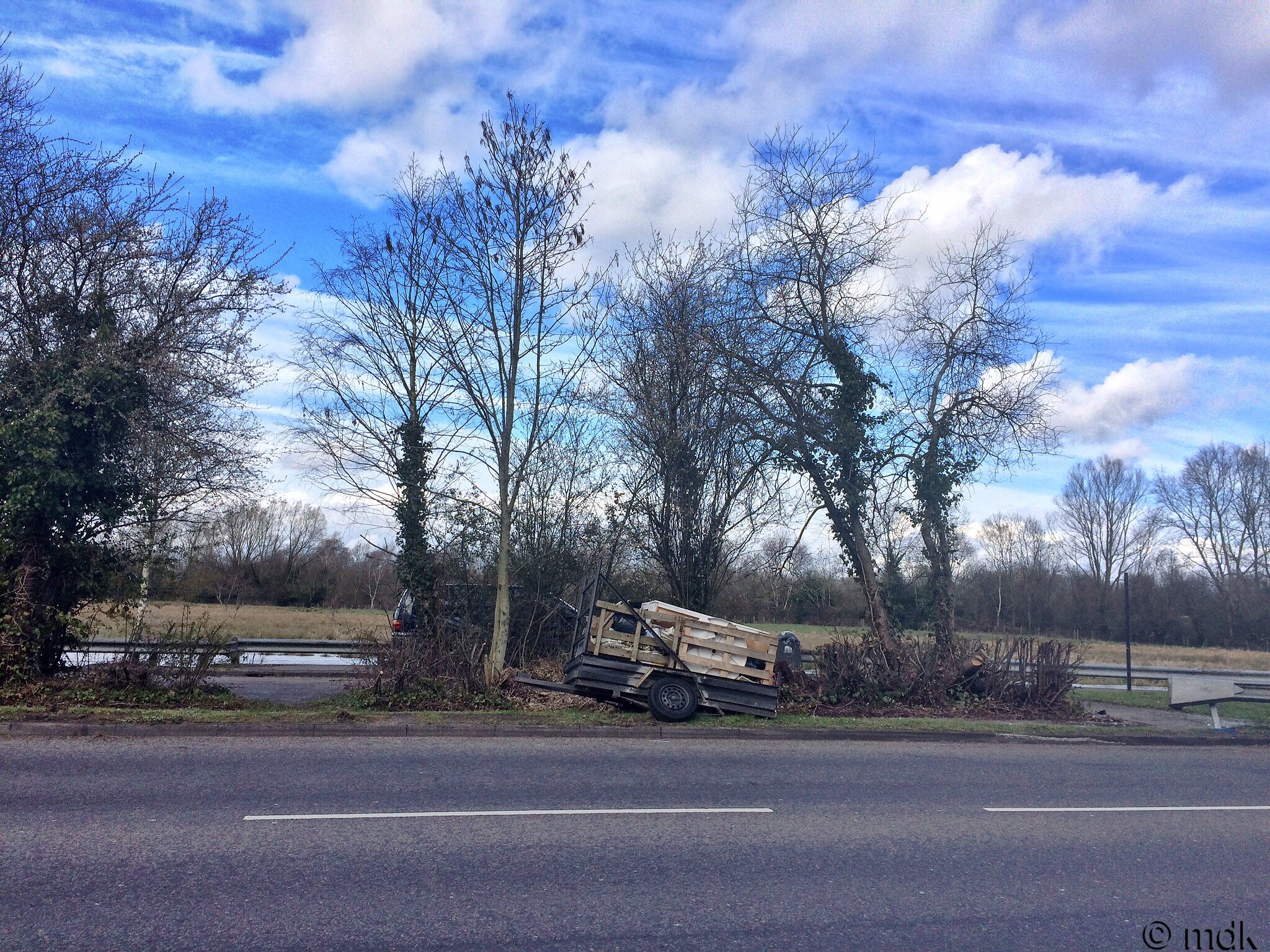 When we got to Gaters Hill the rain started. Our luck had run out. CJ grumbled and muttered under his breath but I said nothing. He was the one who’d decided to keep going after all. With my hood pulled up and my glasses rapidly becoming useless I pounded up the hill. We could have stopped at the garden centre for shelter and a coffee but this time it was me who decided to keep going, much to CJ’s disgust. It seemed sheltering would only be putting off the inevitable, from the look of the sky the rain was probably set to last the rest of the day.

On Cutbush Lane we had shelter from trees on both sides which helped the mood a little. There were bluebells to brighten it further. Near the end of the lane CJ found a bumble bee on the edge of the path. At first we thought it was dead but, as we watched it twitched a leg.
“It’s probably too cold for it,” I said, ” if we had some sugar we might be able to revive it.”
“If we’d stopped at the Swan Centre I might have had some,” CJ wasn’t going to give up the grumbling easily. He was right though, he usually puts a sachet or two in his pocket because we hardly ever have sugar at home and he likes it in his coffee. 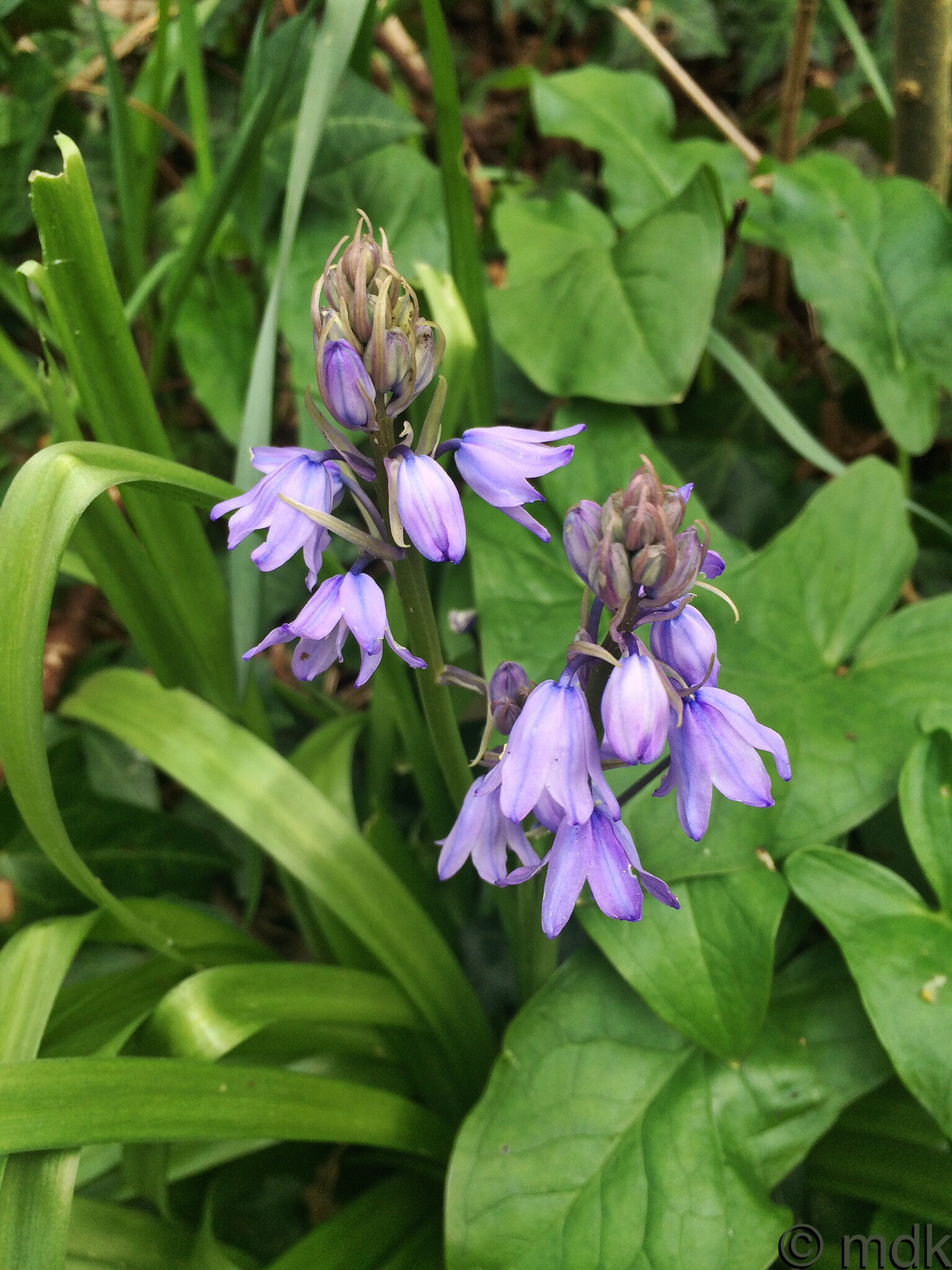 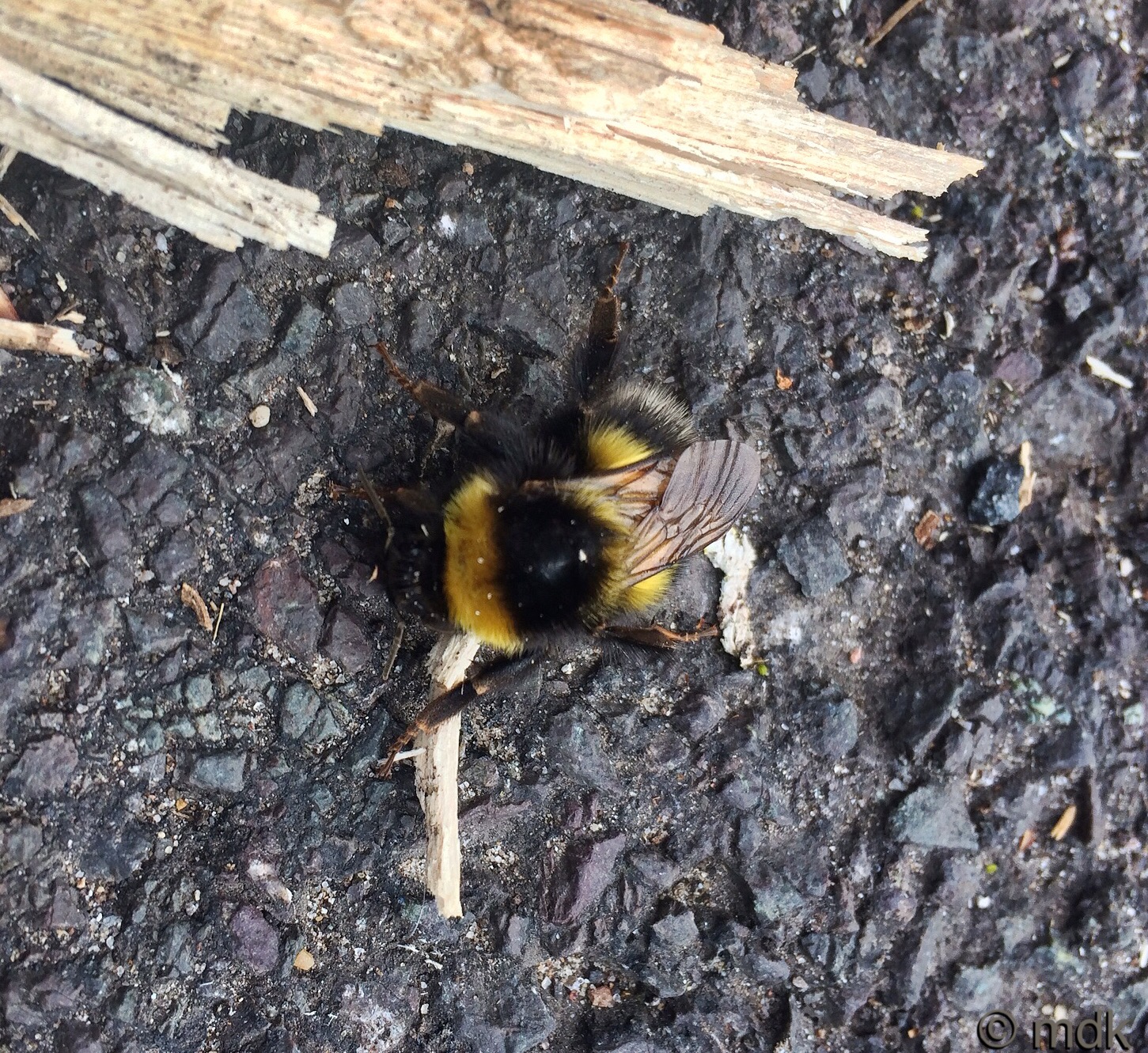 Soon enough we had to leave the shelter of the trees. The uphill part of Cutbush Lane that would take us to the village was running with water so we had no choice but to take to the streets. By the time we got to The Castle we were soaked. It did seem to be easing a little though and the views down Woodmill Lane towards the airport were wonderful.

The rain continued until we got to the top of Glenfiled Avenue, almost in sight of home. This time when I looked for a rainbow I found one, a bright, beautiful arc spanning the wet road. It cheered us both up although we were still dripping gently. Then, on the corner by the school we spotted an old time van loaded onto the back of a truck. I couldn’t resist a photo and the van owner, who was just about to drive off with it, told me it was one of only four in the world. At least our walk filled with disappointment,  devastation and rain ended on a bright note. Even so, next time CJ says ‘just a little further,’ I might be inclined to ignore him. 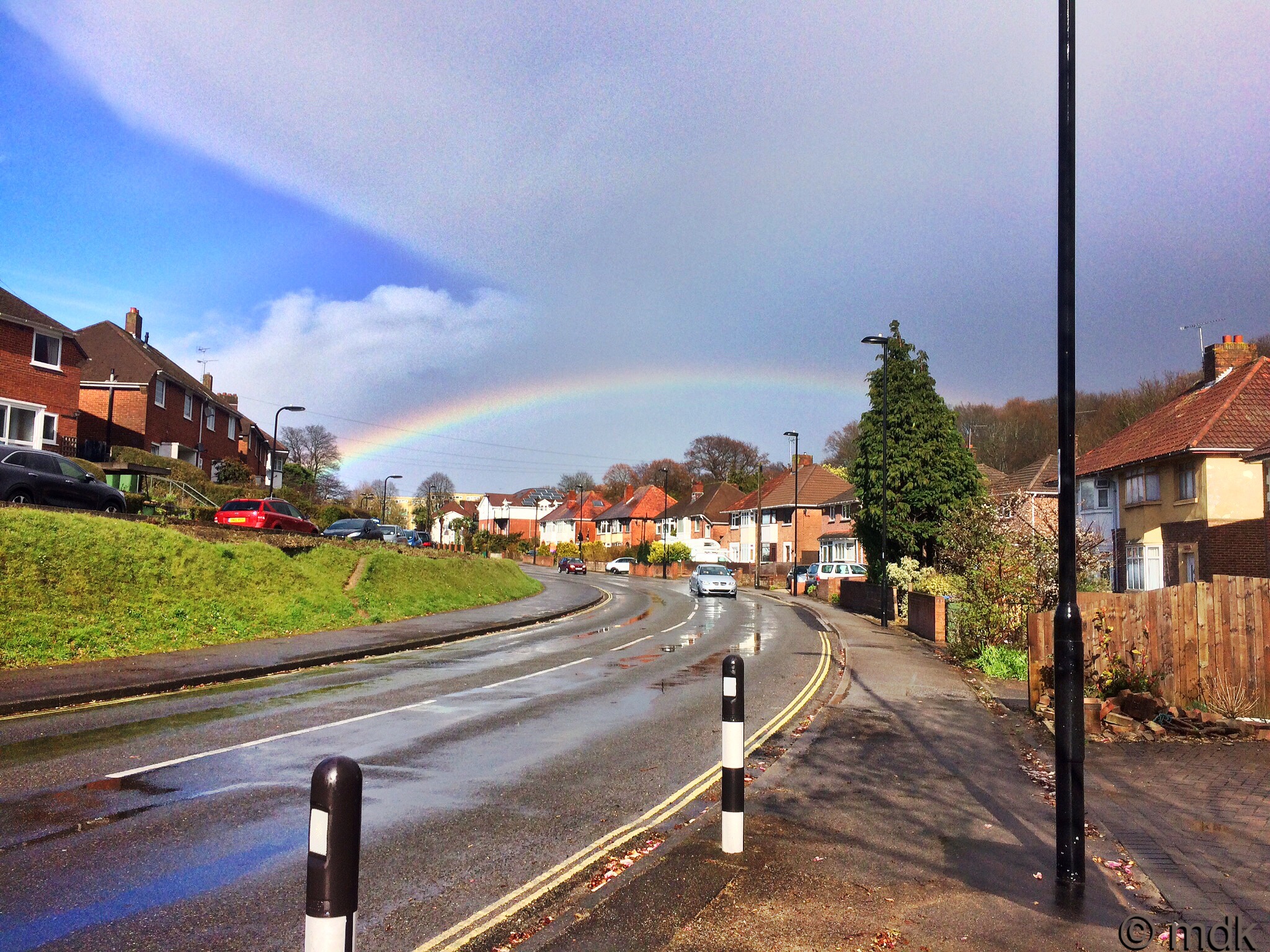 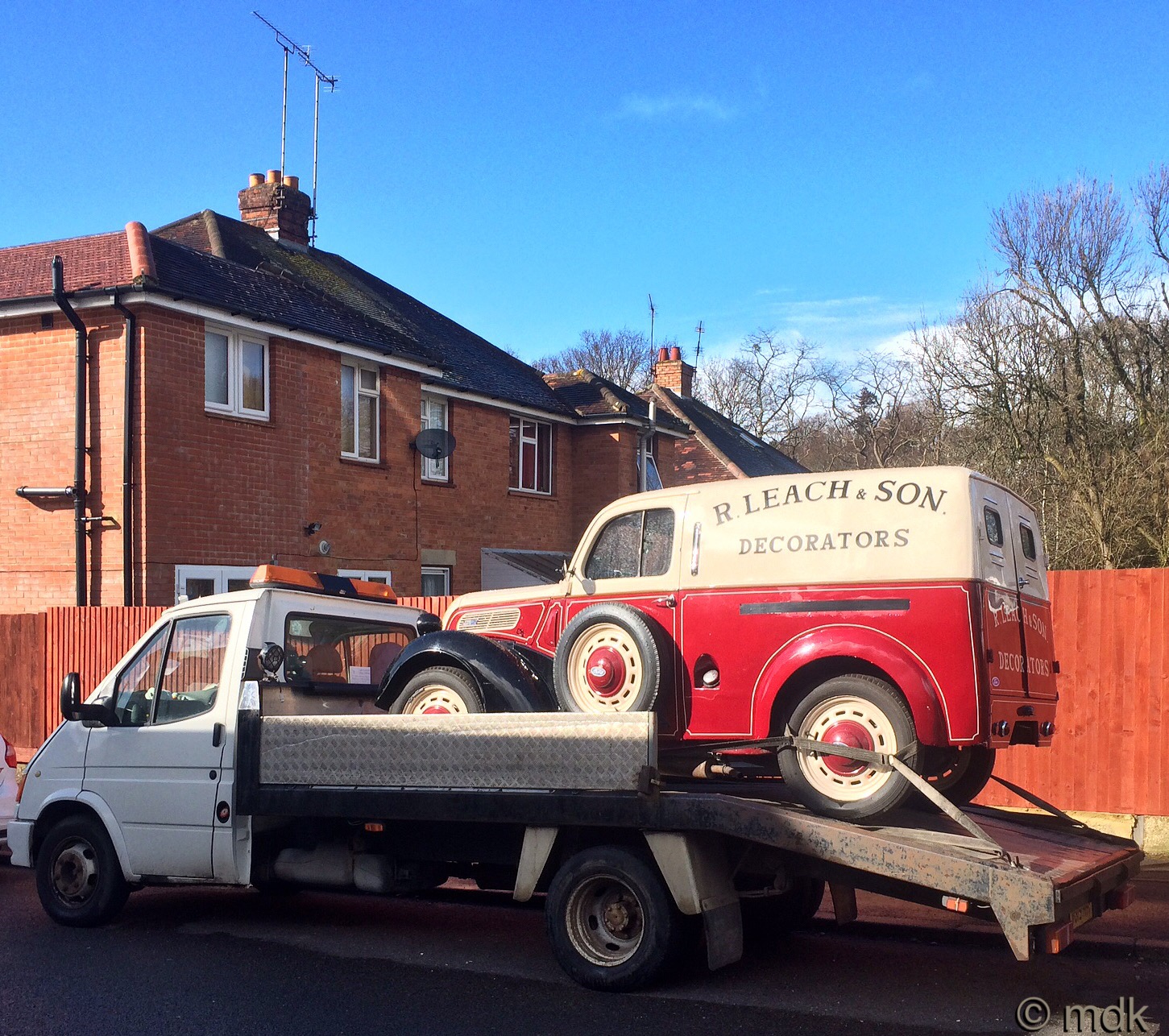 14 thoughts on “Just a little further”