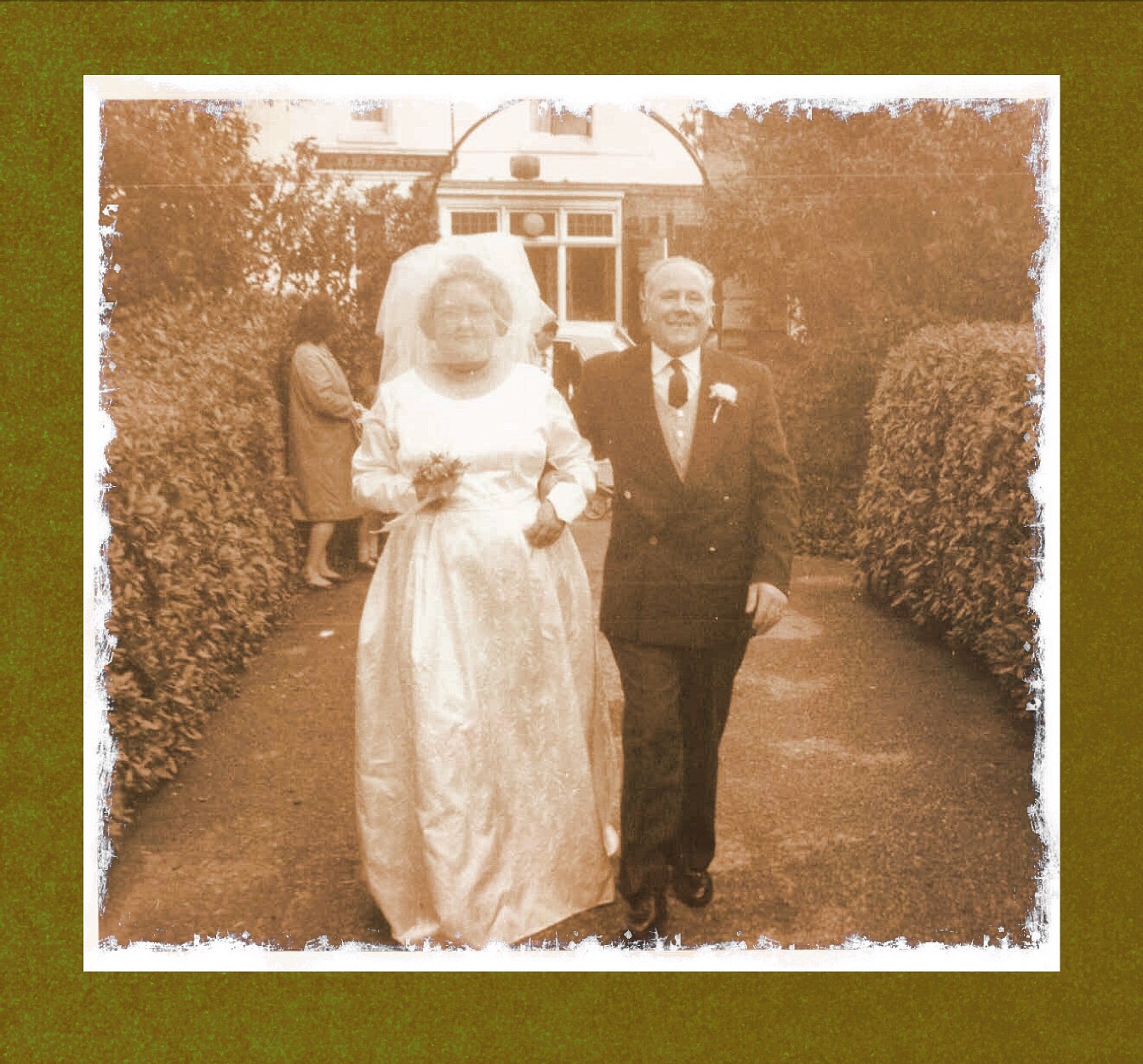 In 1963 big changes were afoot. Alex was getting married! Being just three I don’t remember a great deal about what must have been excited preparations but I do have enduring memories of the day itself. Not all of them are good.

Being small and, probably, slightly sweet, I was chosen to be a bridesmaid. Of course I had no idea what being a bridesmaid meant but I did like the dress, a pretty white gauzy affair with a fashionably puffy skirt and lots of petticoats. There was a pale blue velvet sash to set it off and a ring of blue flowers like a fairy crown for my head. The night before Mother tied my poker straight hair in rags to make it curl. They were lumpy to sleep on, which may explain a lot of what happened later. Alex had a long white satin dress and a veil. I thought she looked like a princess. I thought I looked like a little princess too, not that I really knew what a princess was, apart from Disney ones. 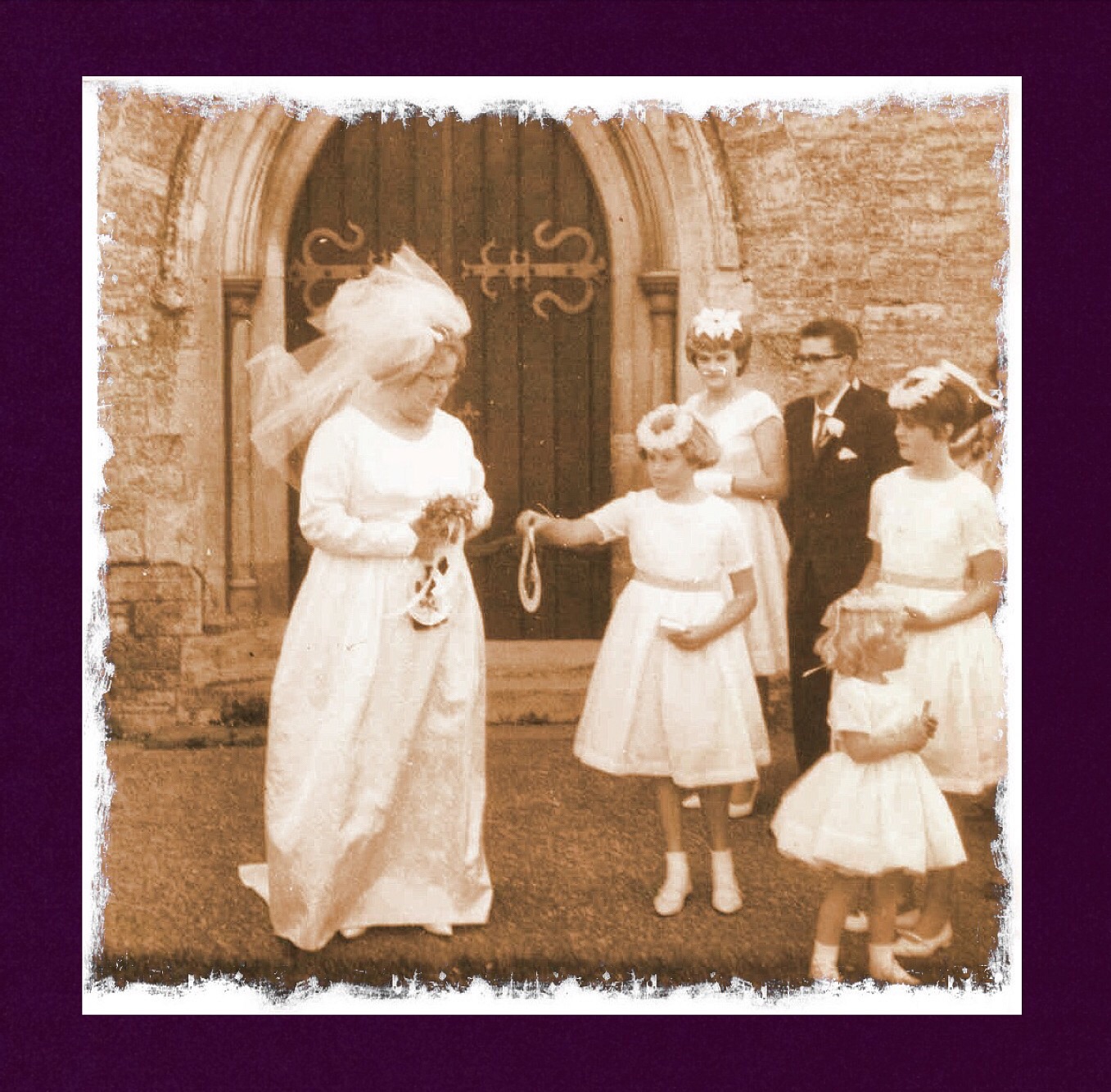 All was going well until we got to the church, the one in my village. Mother went and sat in one of the pews at the front and this is exactly where I’d expected to be too. Of course this was not part of the plan at all because I was supposed to walk down the aisle behind Alex. The church was dark inside and full of people. Much as I like the dark I was a shy child and I was afraid of all those strangers gawping at me. This led to some crying, especially when Alex’s soon to be sister in law, Penny, tried to drag me. The crying led to a very cross Mother. Whether I got to sit with her or not I don’t remember but I’m guessing I did as a bridesmaid crying through the ceremony is probably not a good thing. 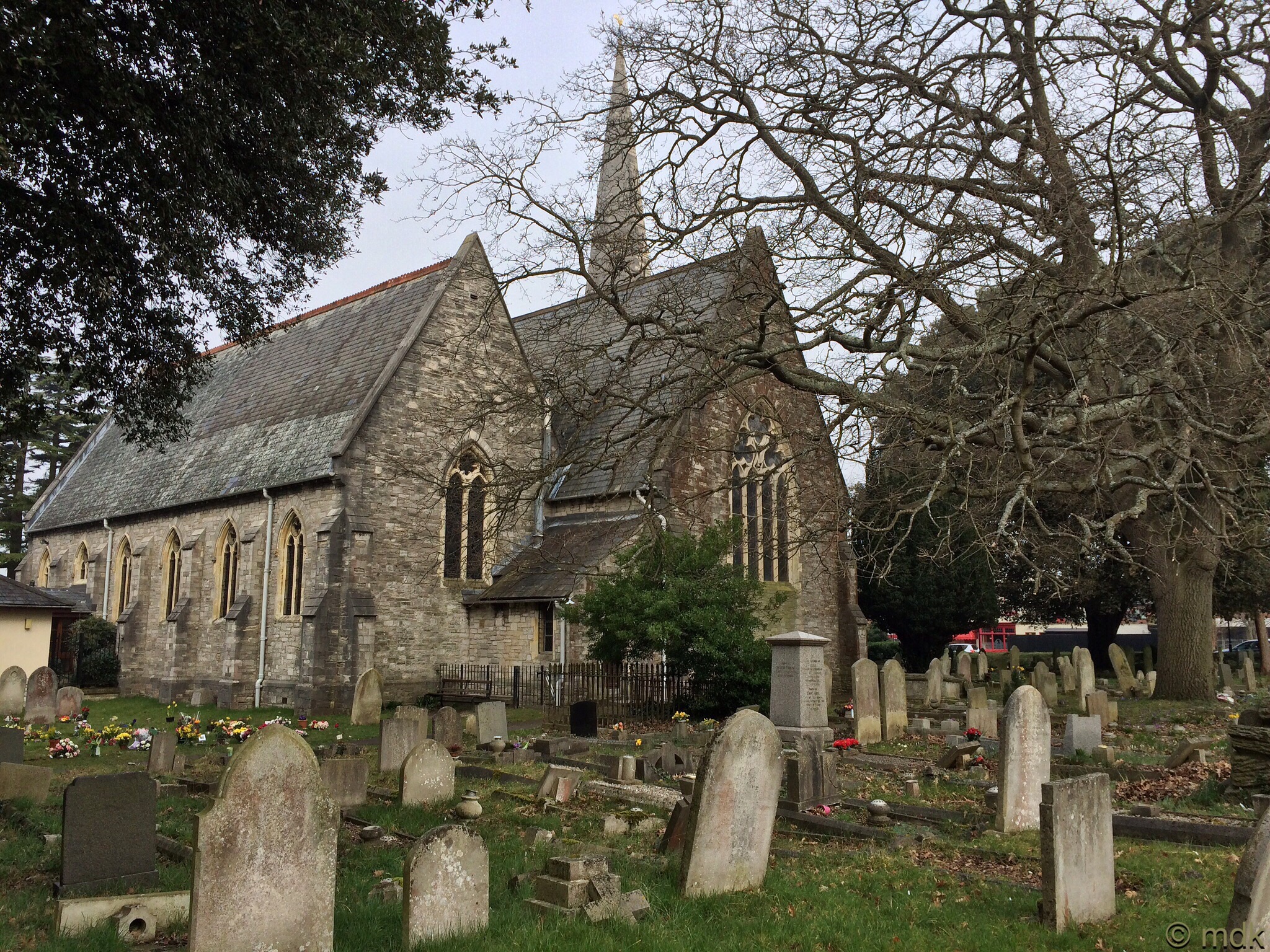 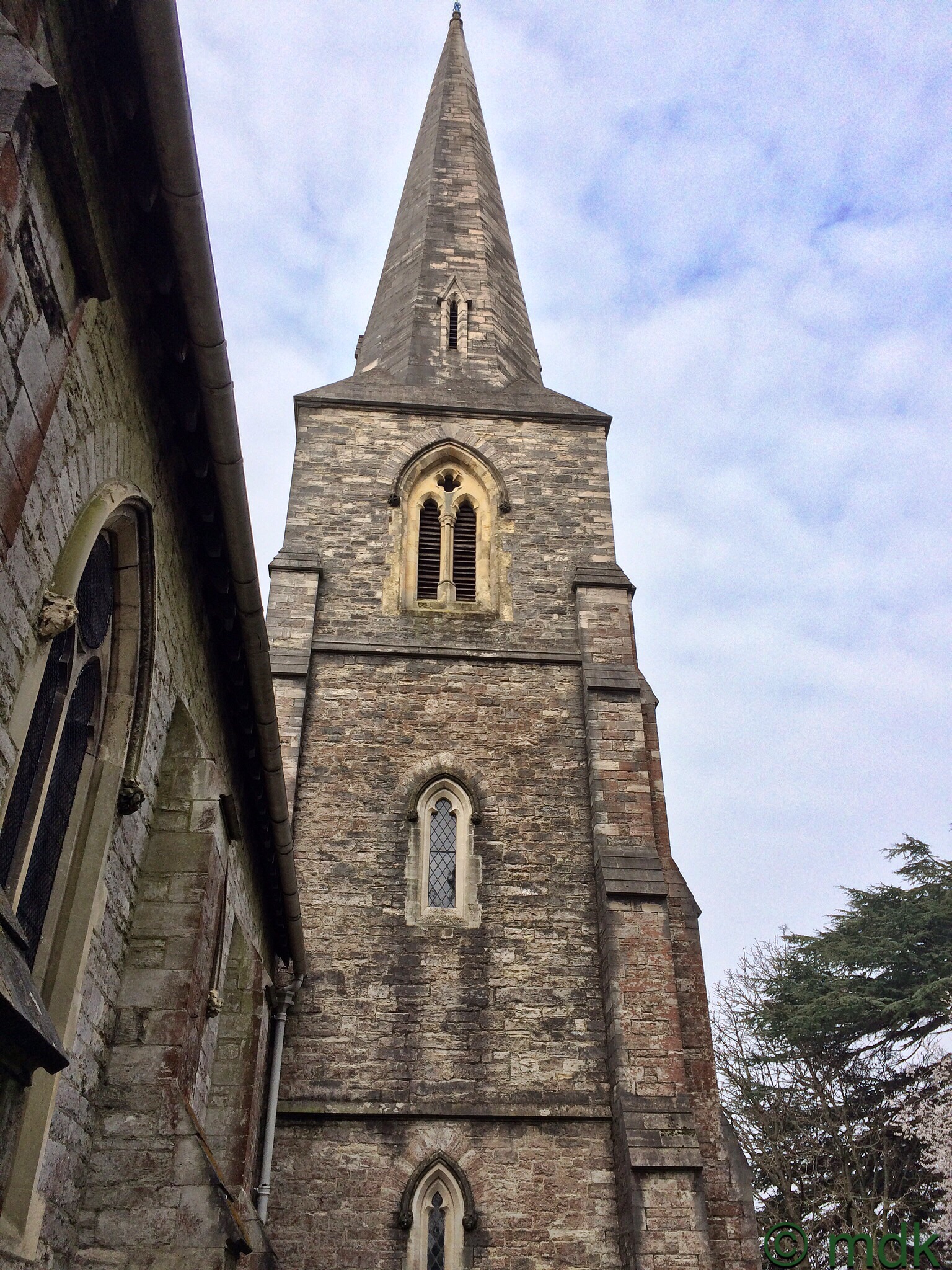 Outside, during the photos, there was a bit more crying and quite a bit of Mother wagging her finger and telling me she’d give me something to cry for if I didn’t stop it. There is actually one photo of her telling me off while I rub my eyes and weep. If they’d just left me alone and let me stay with Mother I’d have been all smiles. Alex probably regretted asking her pesky little sister to be a bridesmaid considering I ruined half her wedding photos. 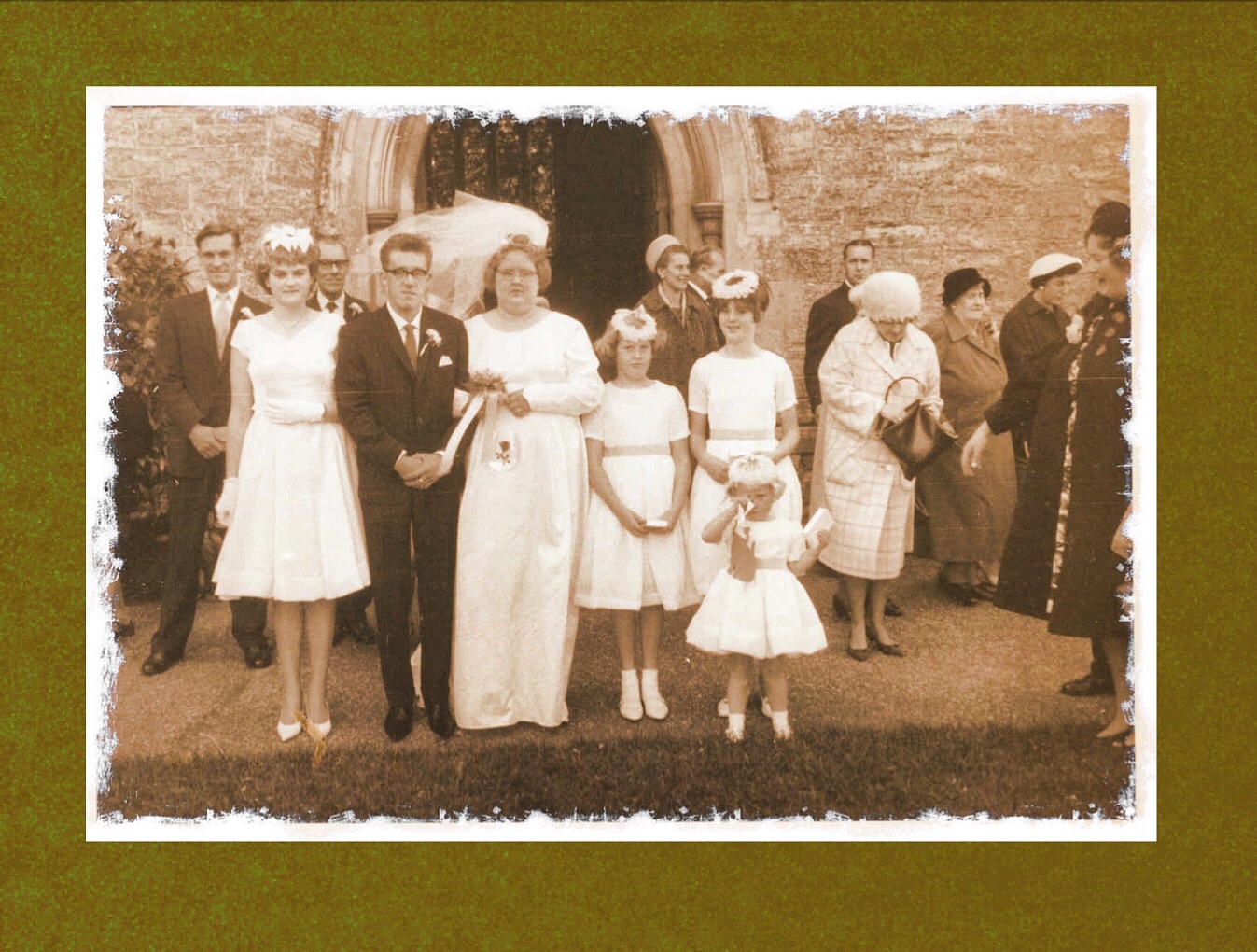 Apparently I brightened up considerably when we got to the reception and I saw the cake. Some things never change I guess. Funnily enough I remember the cake very well. It had white royal icing and little silver balls you could eat. When no one was looking I sat, quietly picked them off and ate them. I’m pretty sure the cake had already been cut at this point. Probably… 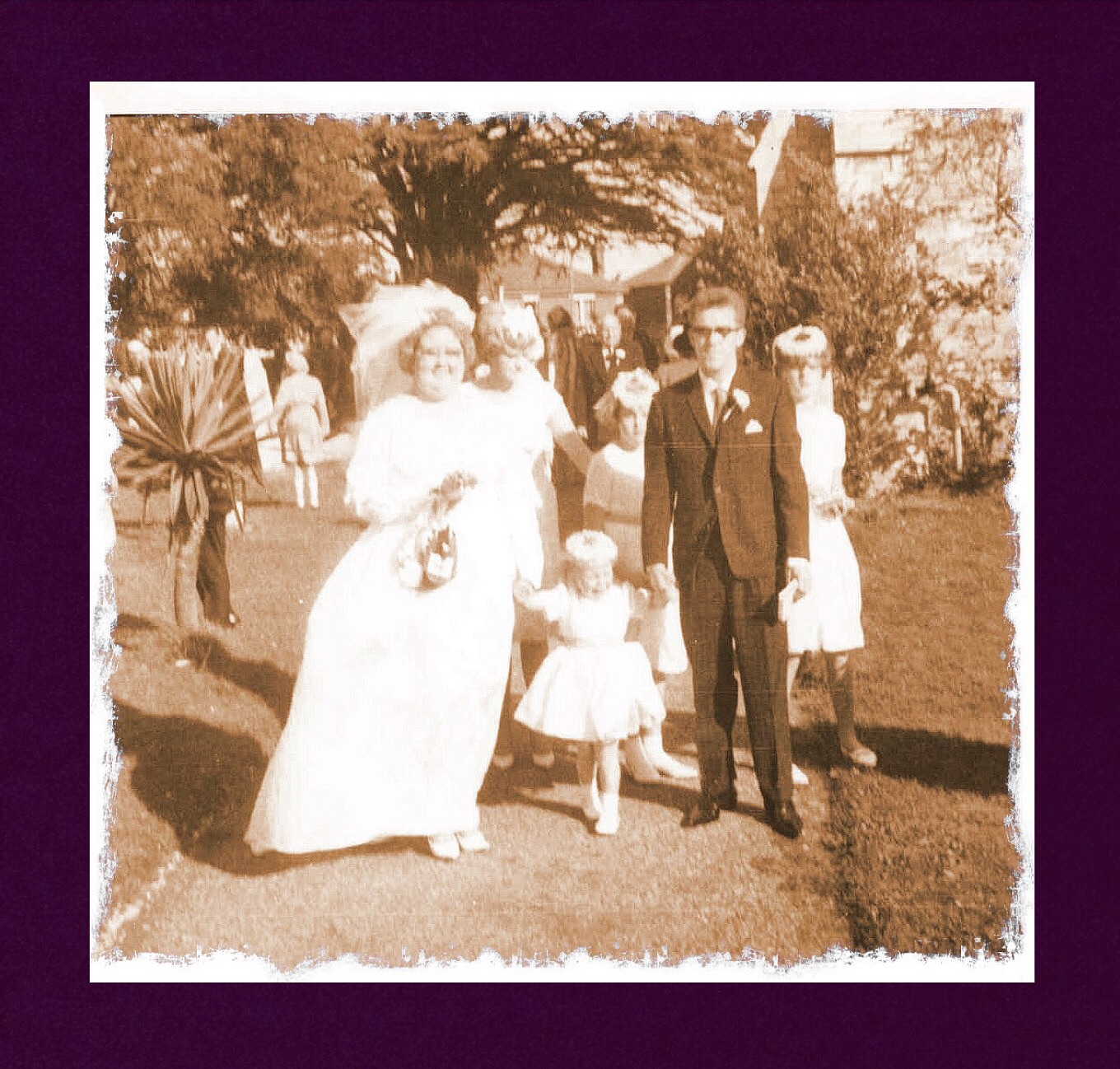 Although I understood that Alex was getting married I don’t think I realised it meant she wouldn’t live with us any more. Quite what I thought would happen I don’t know but I was quite upset when she didn’t come home and went to live with Terry, her new husband.

Unhappy as I was to lose Alex, having my own room was lovely. For the first time I didn’t have to share a bedroom with my parents and I could get up and look at the dark whenever I wanted without anyone knowing. It wasn’t exactly a child’s room with a huge, heavily carved dark wooden wardrobe, a matching chest of drawers and Alex’s old single bed. There was a lamp, I remember, made from an empty Cognac bottle that had, at one time, held a candle as there were drips of coloured wax running down the neck and the shade was decorated with bottle labels.

On the plus side I also inherited Alex’s wallpaper, tiny pale blue and yellow squiggles along with the pictures I loved so much of the seagulls flying over the Itchen. Each night I’d lay in my big bed in the alcove, under blue woollen blankets looking at them before I fell asleep. The lamp was the first thing to go. Mother bought me a brand new night light and although I liked the dark I loved it. It was a plastic squirrel playing a saxophone that lit up from the inside. Very classy! I called him Saxy Sax. There was also a baby alarm with wires running up from the dining room into the airing cupboard in the alcove opposite my bed. 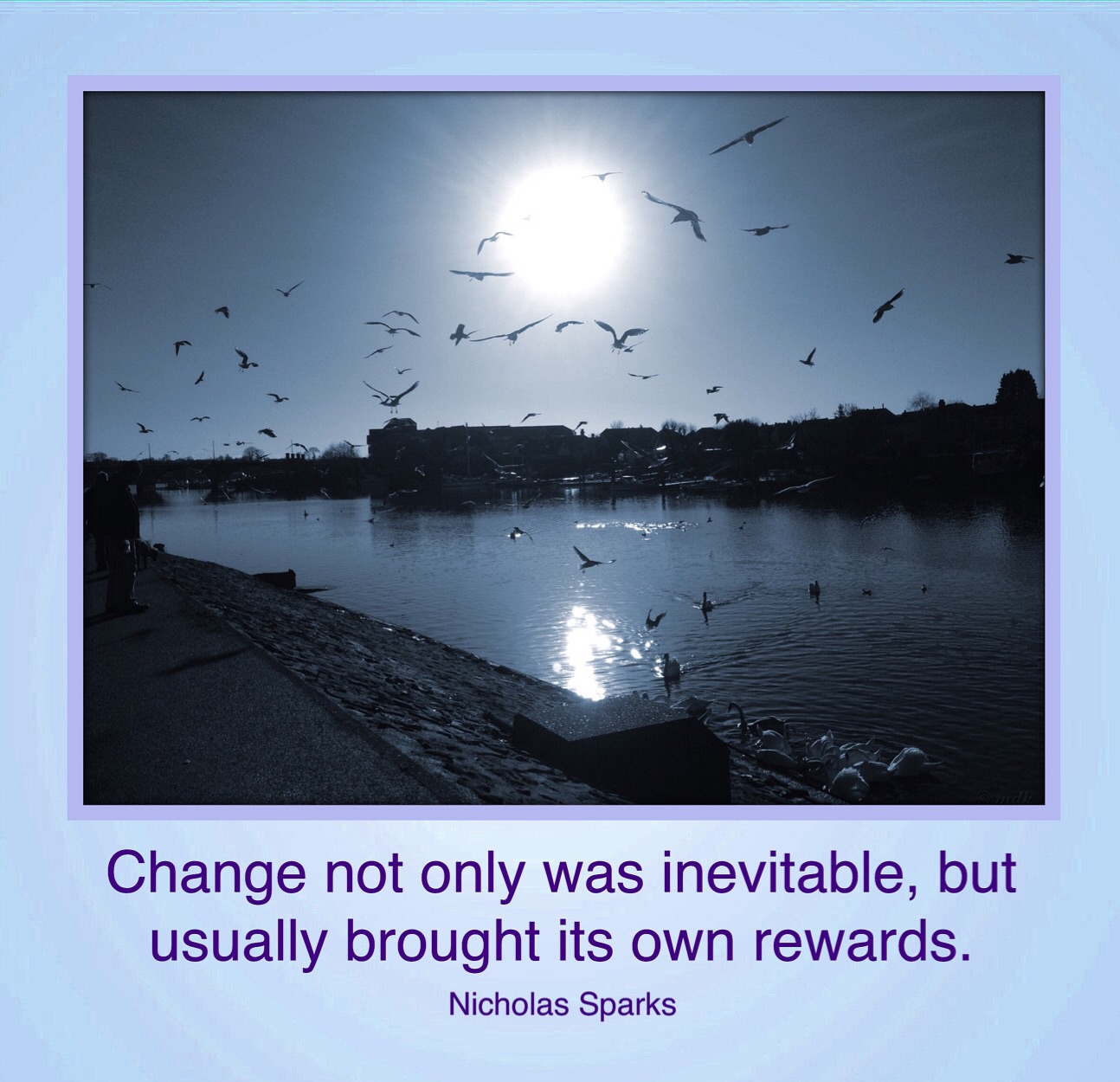 The nightly bedtime ritual never varied. As I climbed the steep stairs Mother would follow singing.

In the bedroom the first job was to say ‘night night,’ to Pappy and Dad down stairs using the white plastic microphone part of the baby alarm. Pappy would always reply, ‘sleep tight,’ and Dad would follow with ‘don’t let the bugs bite.’

Once I’d climbed into bed Mother would read me a story. Winnie the Pooh was my favourite and, when she finished a chapter, I’d beg and plead for, “just one more chapter.” Sometimes I was lucky, others not so much. When I was a mother myself my own boys would beg for just one more chapter too and Winnie the Pooh was certainly a favourite of all three. Then I’d kiss Mother and say ‘night night’ and finally a kiss and a night night for Saxy Sax.

So I’d lost Alex but I’d gained a bedroom. My first lesson in life, sometimes you have to make sacrifices to get the things you want. I wonder whatever happened to Saxy Sax?