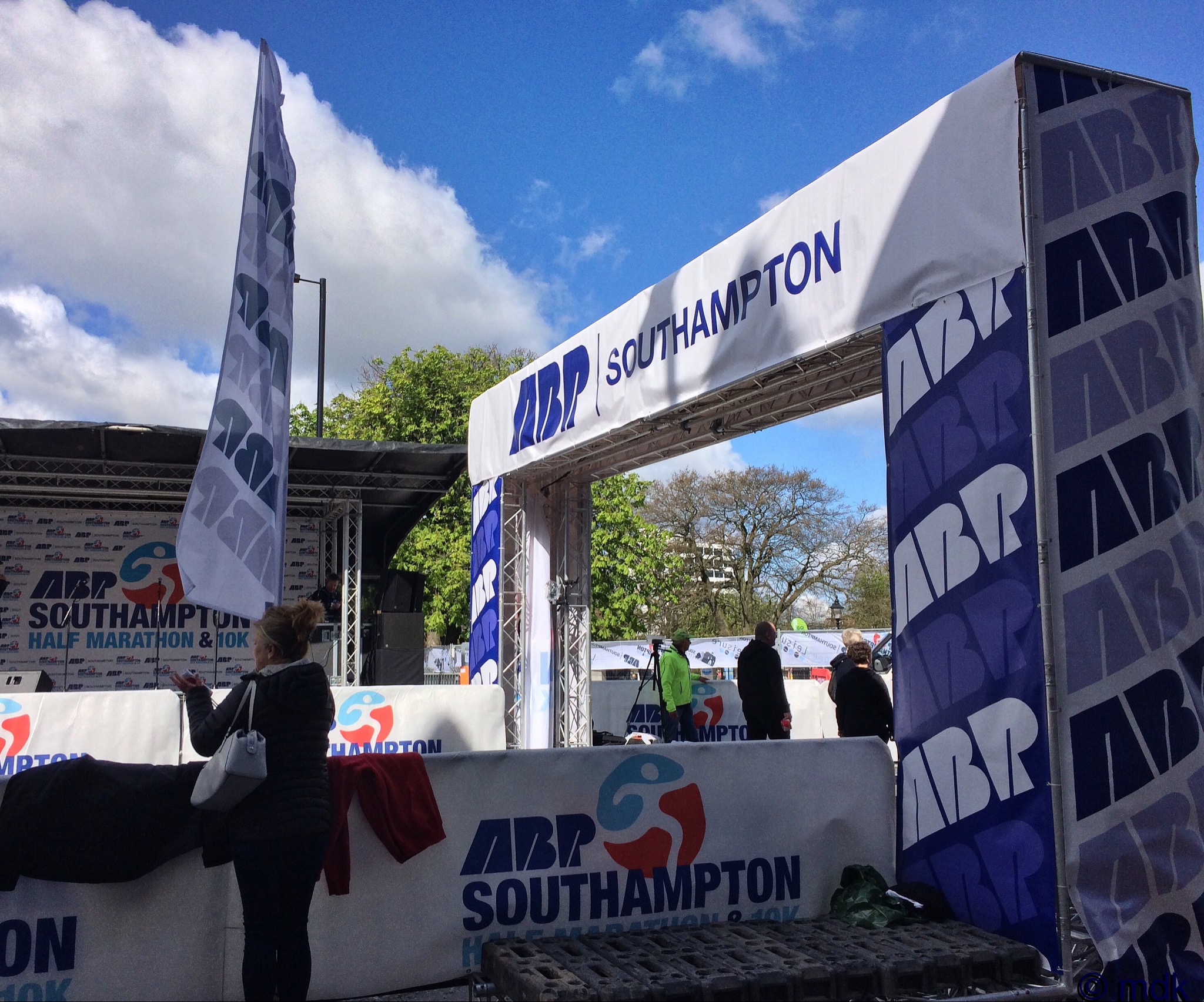 Once the last runner had trotted around the Bargate I thought about my options for catching Commando mid race. If I ran I could probably make it to the Itchen Bridge before he completed the return lap but it would be touch and go and I really don’t do running. Besides, it would most likely already be crowded with spectators. Instead, I headed back towards the race start.

The streets were empty except for a few bemused looking Sunday shoppers who were probably still reeling from all the runners passing moments before. All that changed as I got nearer the start line where crowds were gathering to watch the 10K start. Somehow I squeezed my way through the crowd.

Ex Saints Manager Lawrie McMenemy was on a podium with the Mayor and Comedien Mike Osman addressing the crowd so I stopped for a moment to listen. 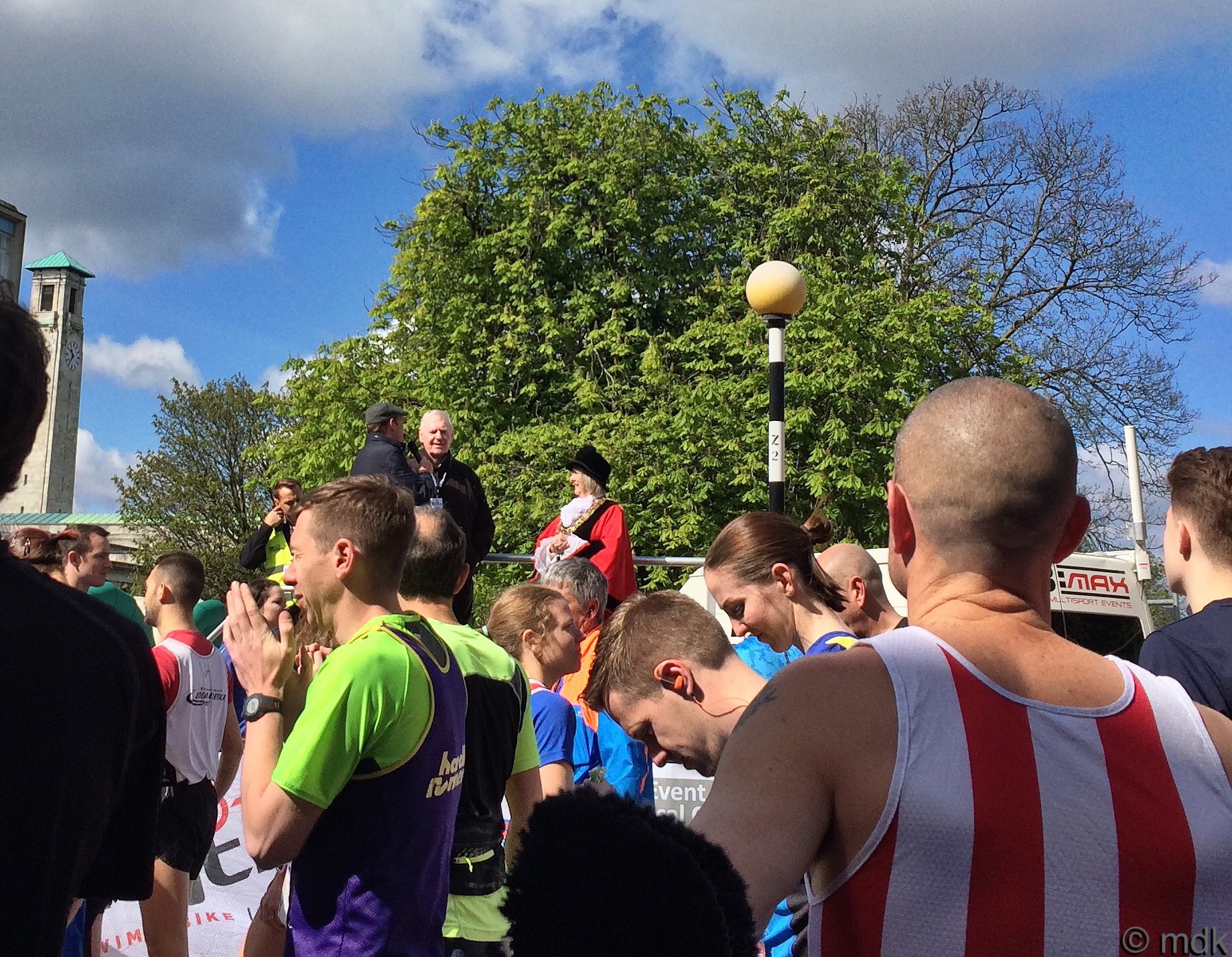 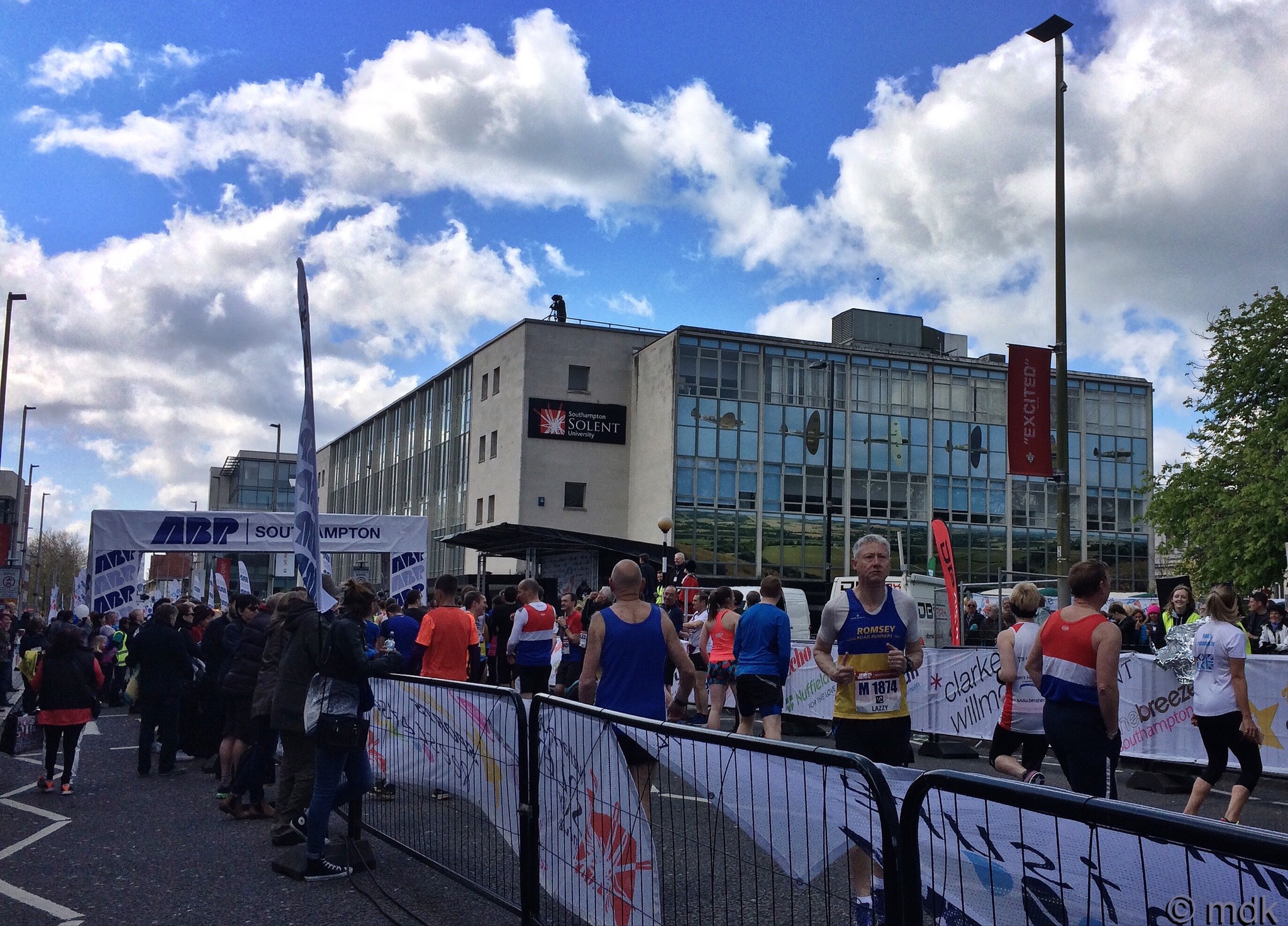 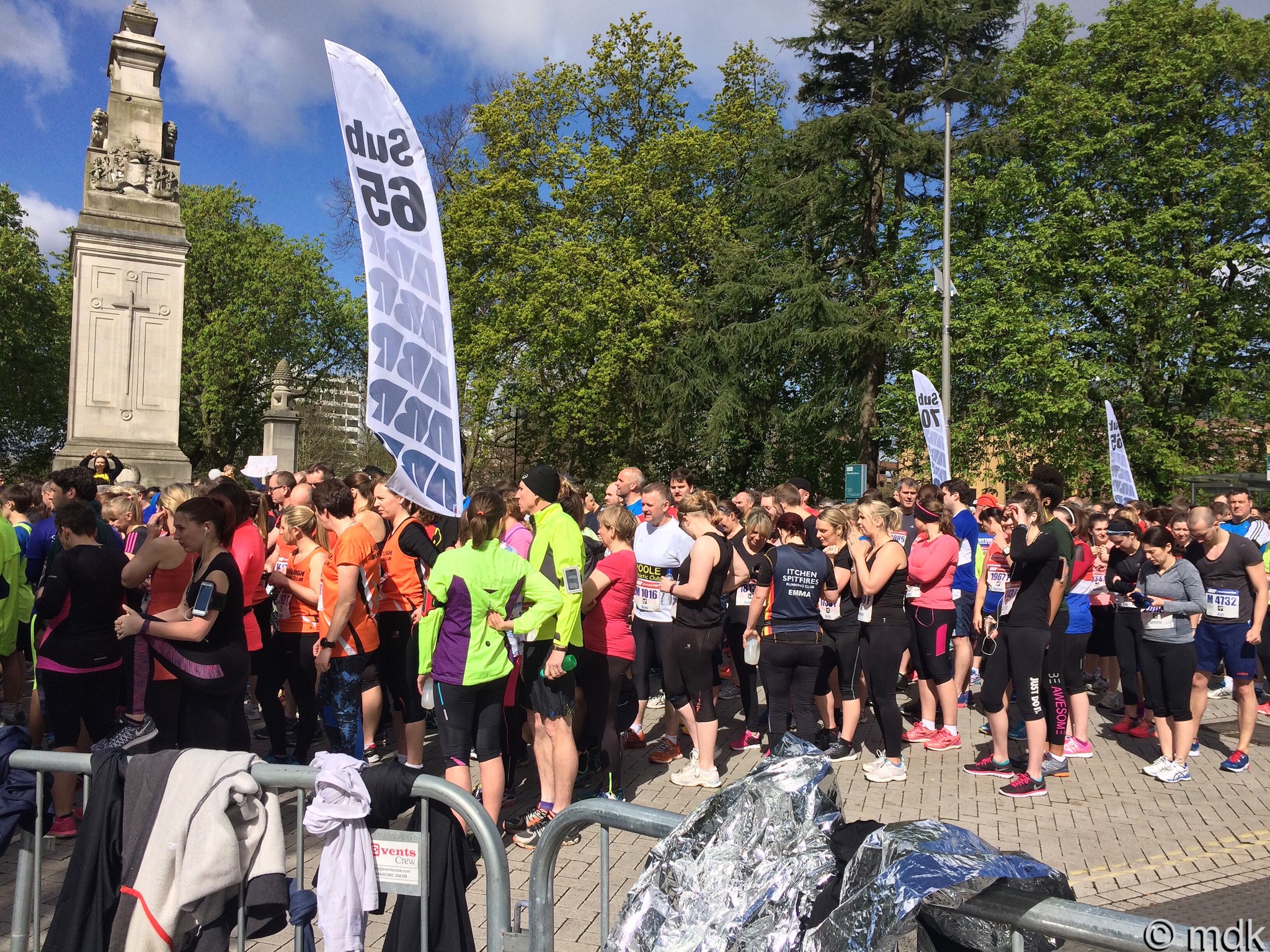 Then the 10k runners were off.  Once they’d gone Above Bar suddenly seemed very quiet. By the Titanic Engineers Memorial I stopped to check the time and think about my next move. Before the race Commando had suggested I walk up to the crossroads on the Common and watch the runners there. He thought he’d be there at around quarter to twelve. If it wasn’t already crowded I might have a chance of spotting him. I had an hour to get there and find a good spot. 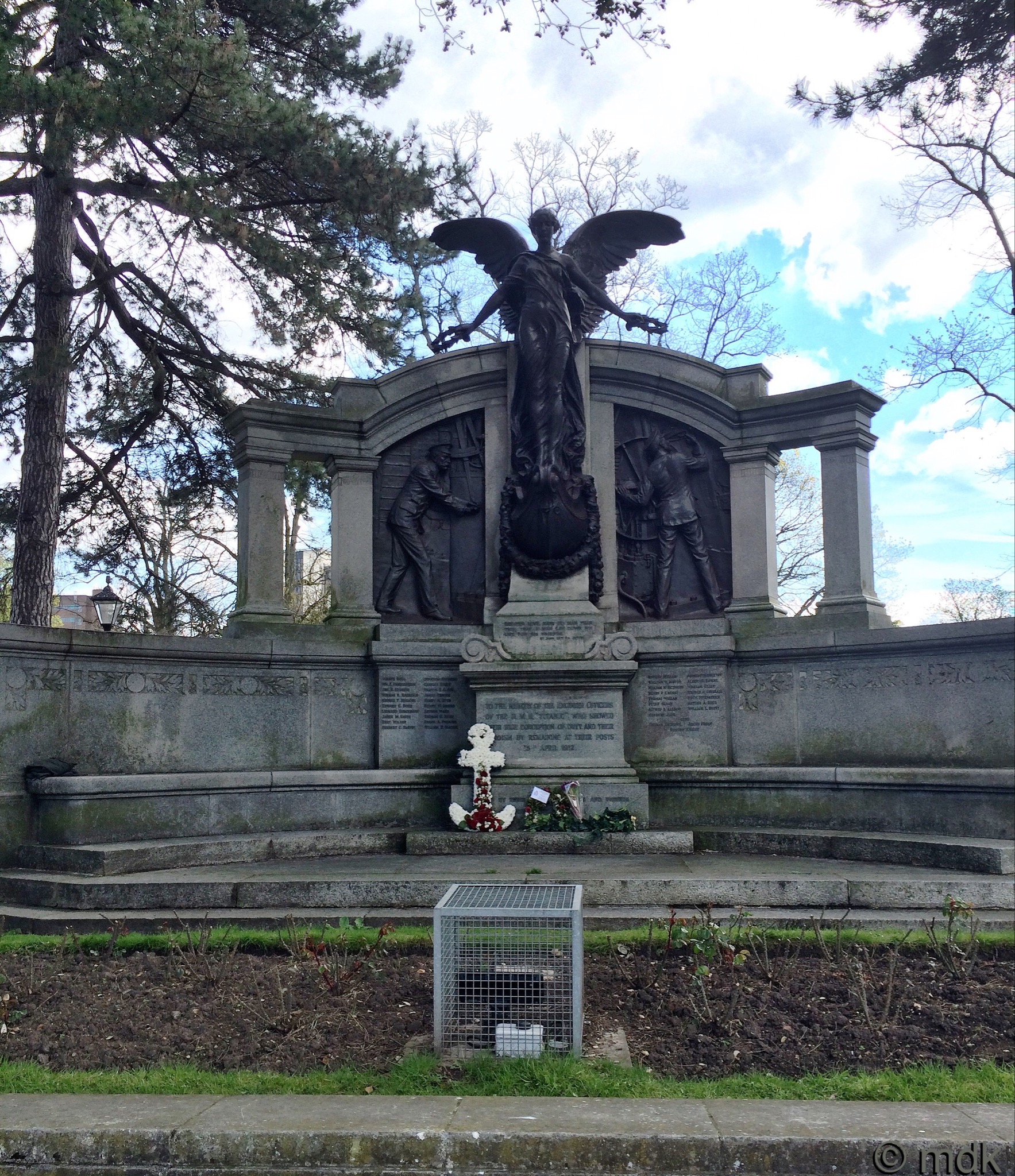 As it’s just over a mile from the start to the Common I had plenty of time but I wasn’t exactly confident of finding a decent vantage point. Thinking the quicker I got there the more chance I’d have I pushed my pace. By this time it was getting really hot and I was tempted to pop into the Hawthorns Cafe for a little hydration but I passed it by. Approaching the crossroads I could see a small crowd lining the path cheering on a trickle of runners. 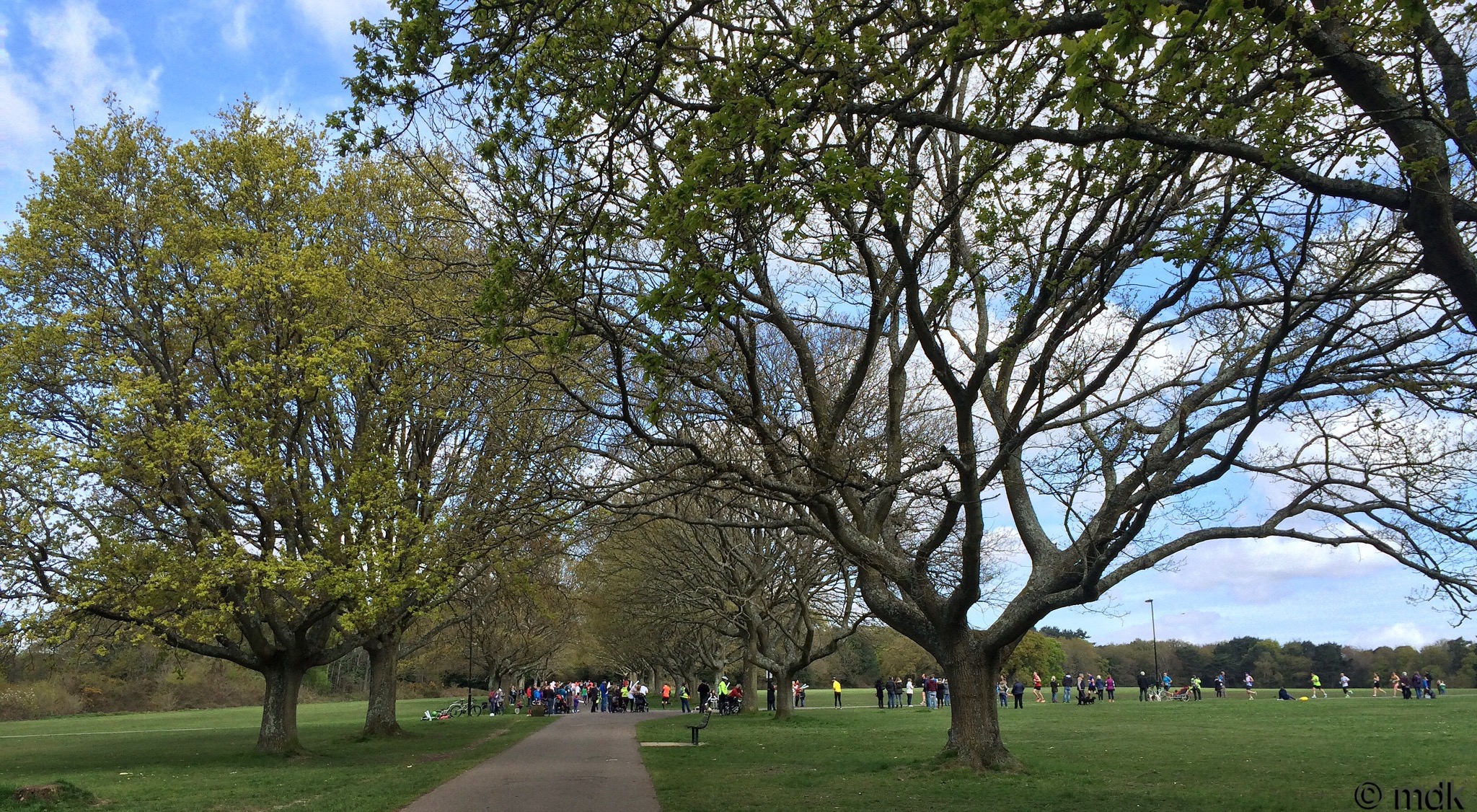 Wth a little manouvreing I managed to squeeze in on the corner next to one of the marshals. It was the perfect spot with a good view along the path in both directions. In normal circumstances Commando would probably be appearing st any moment but, of course, he was pacing two hours ten and running much slower than normal so I was in for quite a wait. To keep myself amused I cheered the runners as they passed.

After the second or third cheer the marshal asked me if I was a member of a running club.
“No, I’m just a WAG,” I laughed. “My husband is though, he’s one of the pacers today. ”
The more I looked at her the more I thought I knew her from somewhere. She was looking at me a bit oddly too. Obviously people looking at me oddly is no new thing. I do have a rather eclectic dress sense, especially when I’m walking and she could have been wondering about the rucksack, bum bag and scarf tied round my waist, not to mention the mismatched hoodie, leggings and parka combo. It was far too warm for so many clothes but it was wear them or carry them.

Eventually she said, “I’m sure I know you from somewhere.”
Right at that moment I rememberd exactly where. She’d interviewed me for a job back in October. In fact she’d seen me twice because I made it to the second interview but didn’t get the job. When I told her this she looked faintly embrassed and I half wished I’d kept my mouth shut.

Shortly after the runner in the Sammy Saint costume dashed past I spotted the one hour fifty pacer, closely followed by Matt LeTissier. In the pacer’s dressing room before the race he’d said he was aiming for a 1.50ish finish so he looked to be more or less on target. 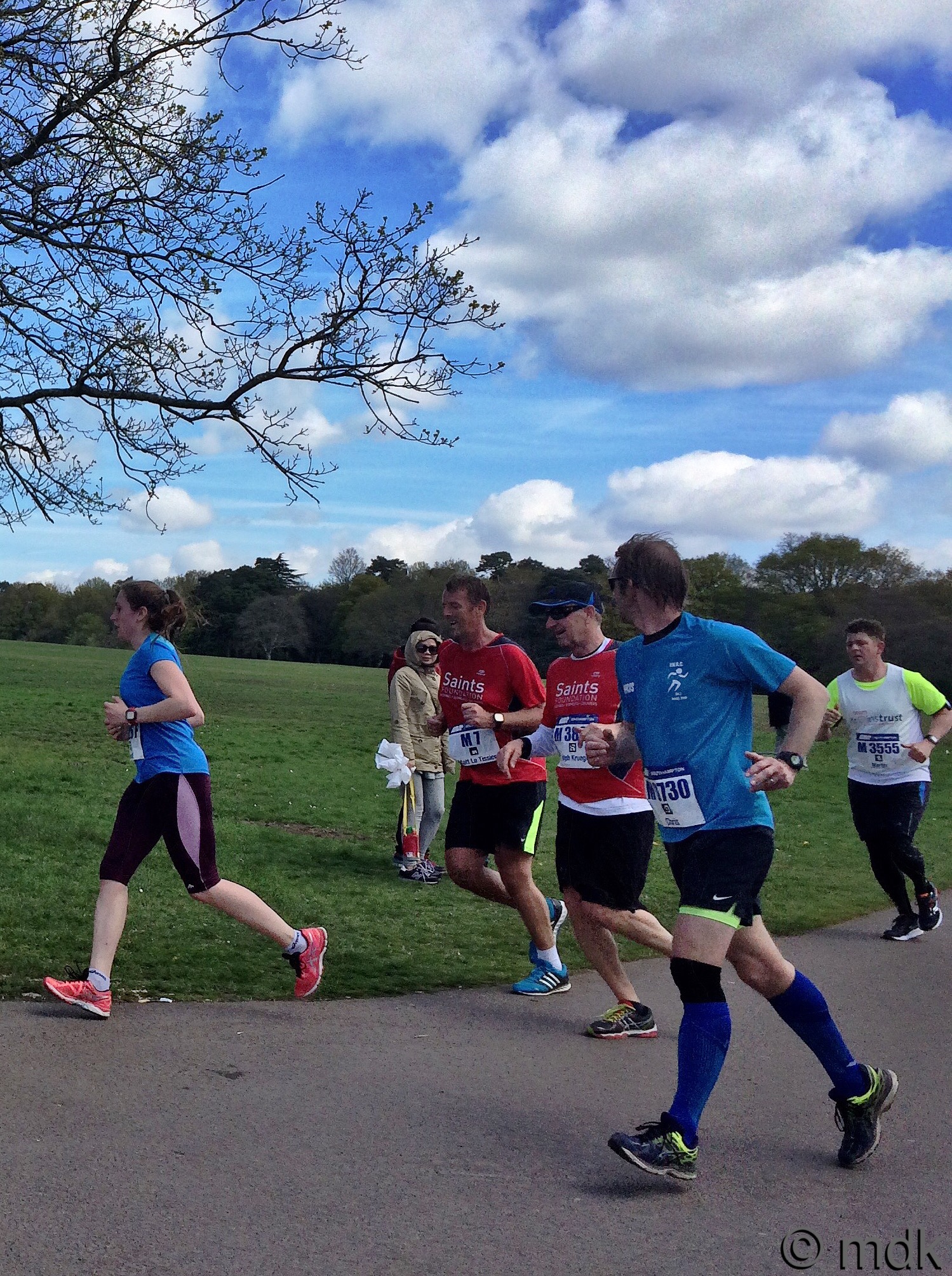 Sandwiched between the men in fluorescent body suits I’d seen at the Bargate earlier, I spotted the two hour pacers. Commando would be next so it was time to really concentrate. Of course my phone chose that exact moment to go onto low battery. There was a lot of panicked fumbling around in my bum bag for my battery pack, during which time I thought I might have missed him.

Normal service was soon resumed but it was tempting to keep looking at my watch. Ten minutes seemed to be passing very slowly but I knew if I did I’d miss him, if I hadn’t already. Then I spotted a blue and white pacer shirt in the distance. Commando spotted me too, possibly because I was jumping up and down and yelling his name while simultaneously trying to take photos. He ran towards me arms wide. Comfused, several runners almost followed him. 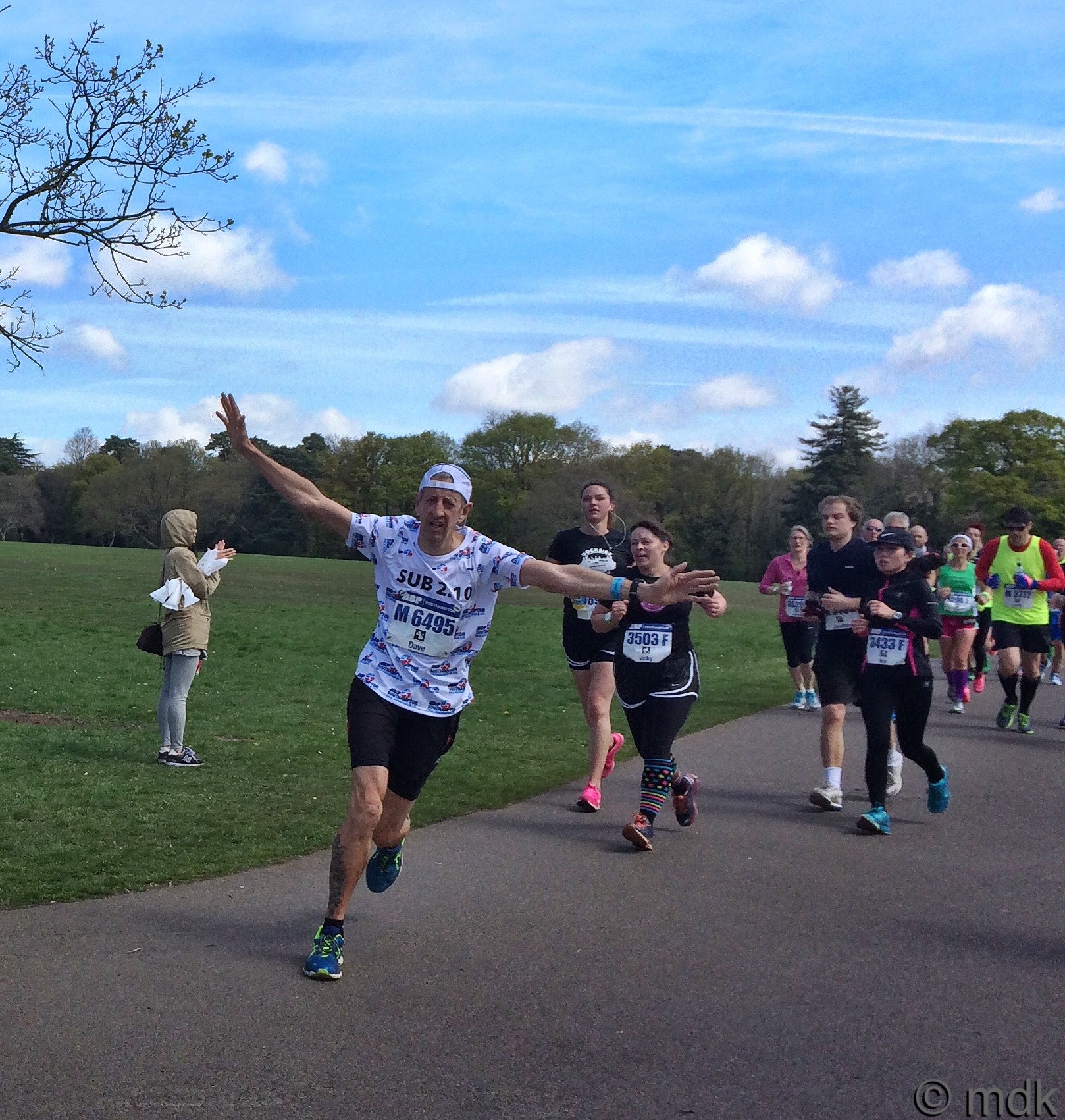 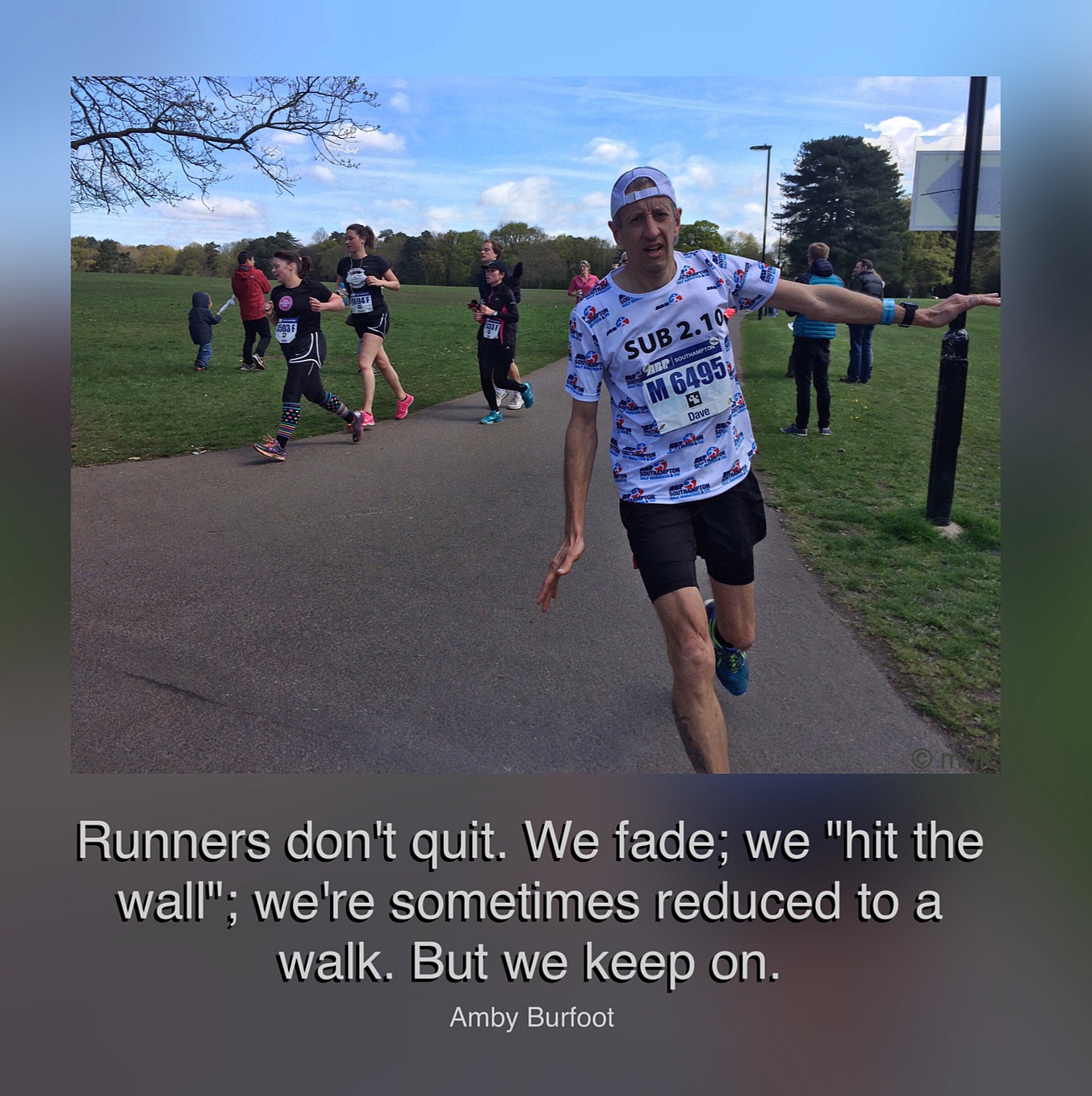 Now I had another choice to make. Did I try to get back to the finish line to see if I could spot him again or did I dash down to Cemetary Road in the hope I’d get there before he did? Given the distances and the likelyhood of massive crowds at the finish I decided on the latter.  Even so I knew time was short. For fear of missing him I ran, but don’t tell anyone, I have a reputation to keep up.

As it happened I must have run faster than I thought I could because I got to the corner quite some time before Commando came speeding by. Despite my shouting he didn’t see me this time but I was getting a little hoarse by this point so it was more of a squeak than a shout really.

Once he’d gone I crossed to the other side of the Avenue and made a frantic dash for the finish even though I knew it was hopeless. For a while I could see him across the road and, by continuing to run, I kept pace with him for a while. Obviously it didn’t last. I am not cut out for running and I soon slowed to a power walk. When I got across the Park to the finish I knew he was long gone. Besides the crowds were so thick I didn’t have a hope of seeing anything.

In the end I cut my losses and went to the pub where everyone was meant to be meeting after the race. Commando rang a little while after I arrived to say he was with the other pacers taking advantage of a buffet that had been laid on for them. After all their hard work I think they earned it.

Commando did join me eventually. Over a well earned pint he told me all about his race. His tricky ankle had held up well and, despite the slow pace, he’d enjoyed his first race in our own city. As planned CJ had got up early enough to see him pass the Station Pub near our house and had even taken a selfie with him. 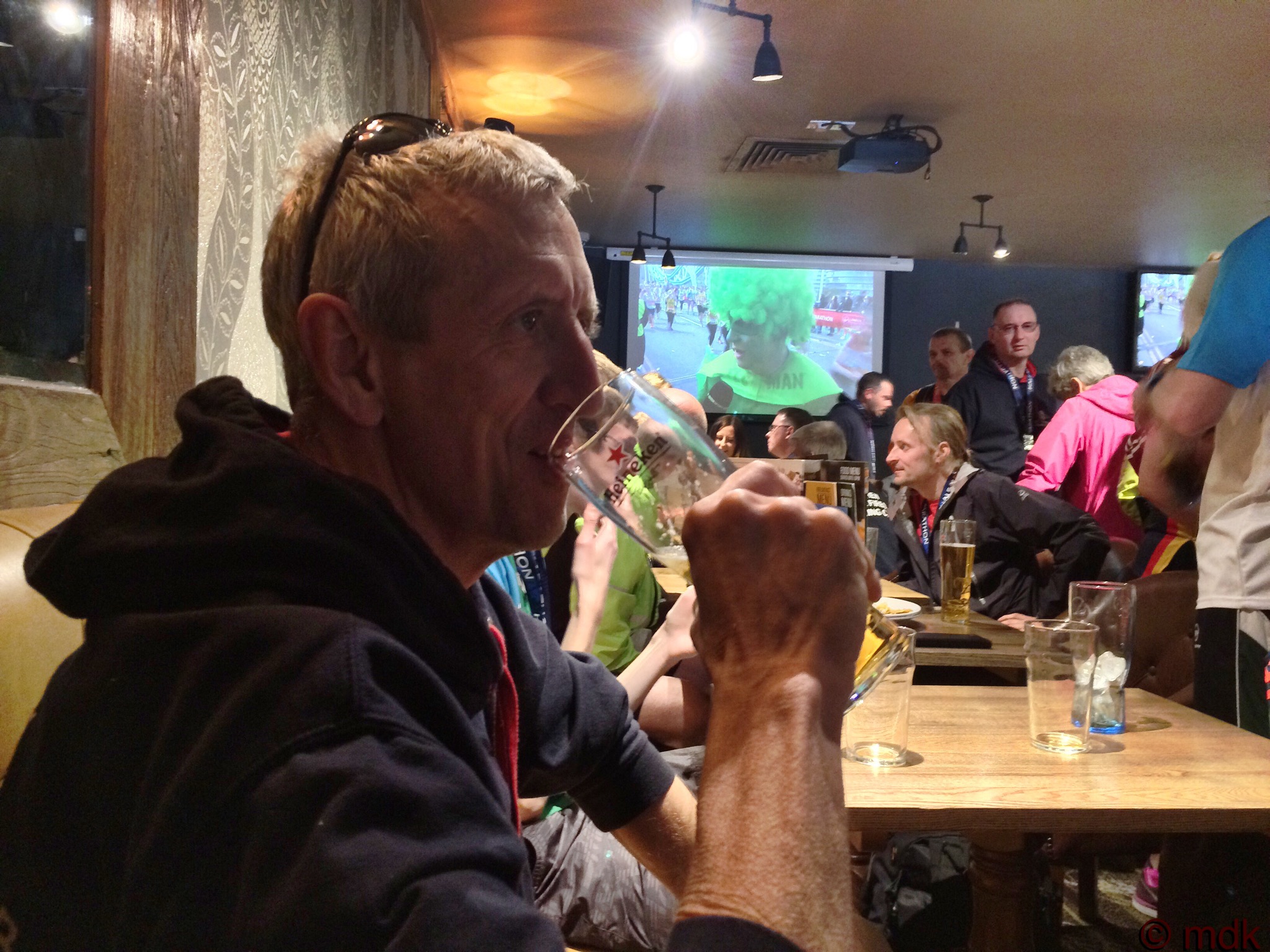 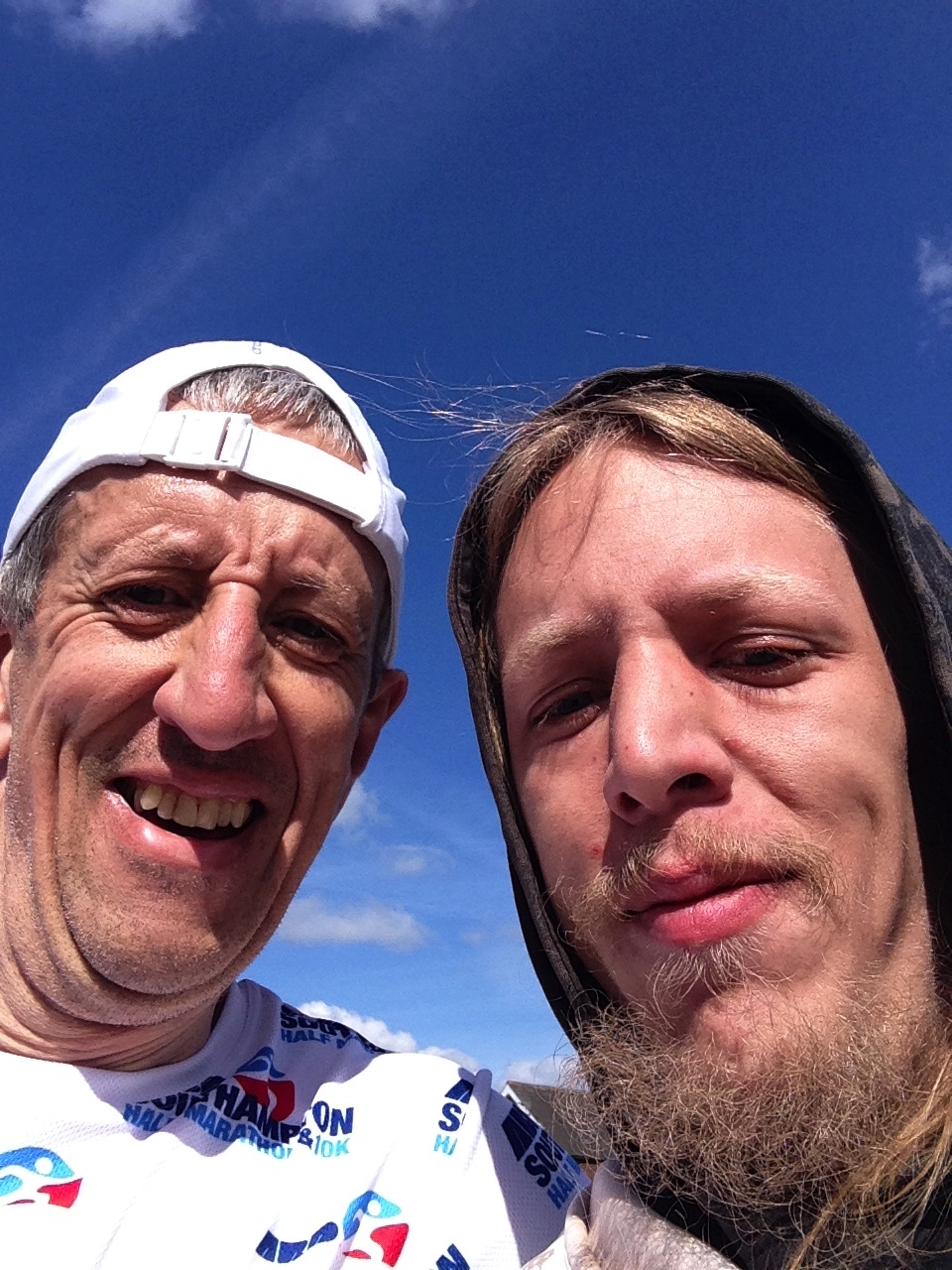 Later we strolled past the now deserted start pens towards the car. The sun was still shining, Commando wasn’t limping and the abandoned marathon in Manchester two weeks ago seemed like a bad dream. 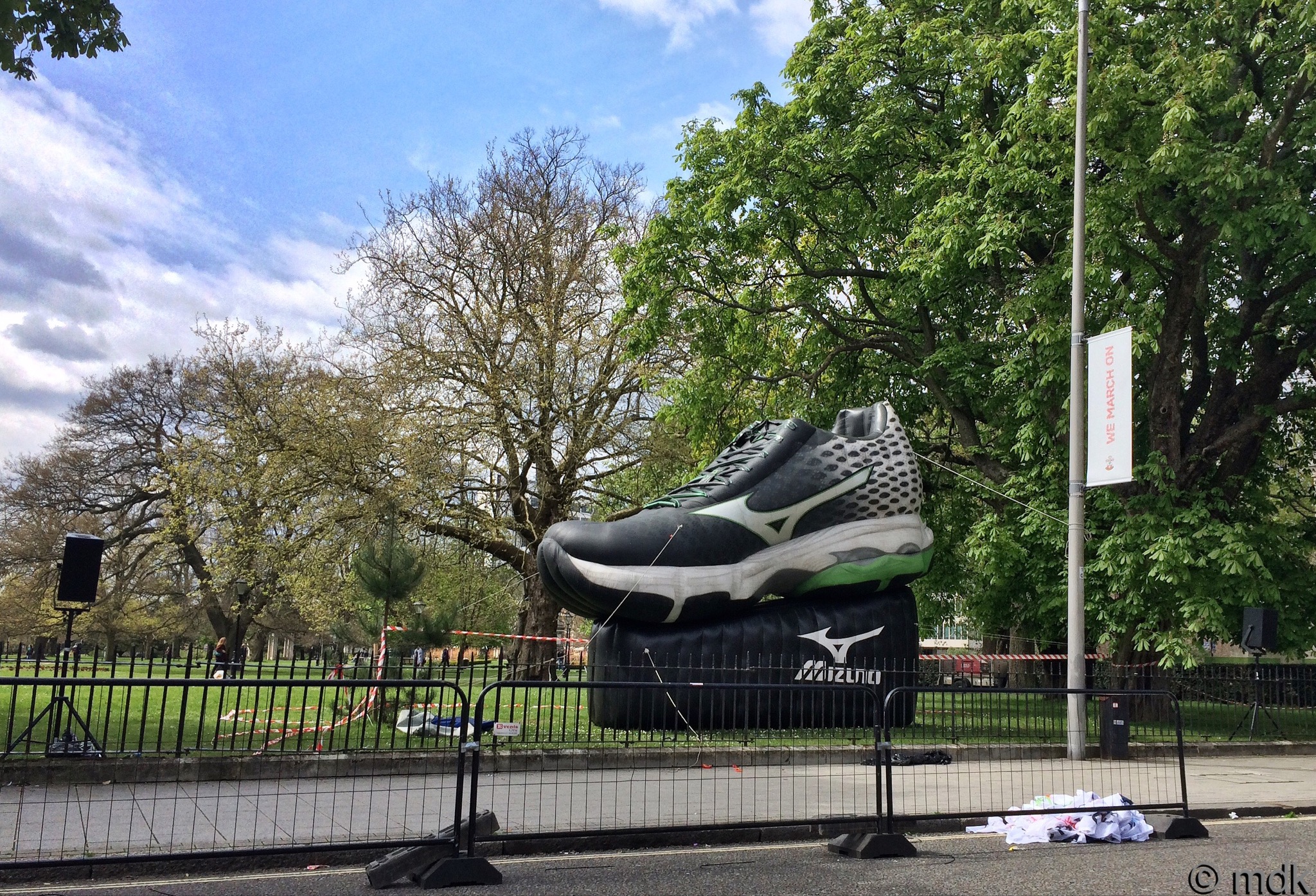