A few days ago I told you all about the Big Hill and the Little Hill, and my daily struggles with them. In September 2012, after a few lazyish days, I decided I needed something to make up for it and add a bit more intensity to my weekend walk. This involved a hill that leaves my daily hills looking tame. Sometimes I’m my own worst enemy. Still, I did add a few tips for dealing with tough hills.

You’ll all know by now that I’m no stranger to climbing hills and, because I’ve missed out on my stomp to and from work for the last two days, courtesy of lifts from Gigi, I decided I’d better spice up my walk this morning with a bit of a hill fest. The weather was a touch on the dull side with masses of grey clouds and quite chilly too so I made sure I wrapped up warm with my parka and long leggings, grabbed my, hat and my iPod, turned on the Walkmeter and set off towards the river. Walking down towards The Triangle I was wondering if the rain was going to hold off or not, and planning a route that gave me a few short cuts to get back faster if the heavens opened. In the end I decided I’d go along to the White Swan and then take the hilly way back up towards my village.

Hills really push up the calorie burn and the heart rate and there’s no shortage of them round these parts. The walk I chose took in a few really tough ones too which was just what I needed after a fairly sedentary week. The riverside walk to the Swan is about two and a half miles but it’s flattish after The Triangle. From the Swan though, my chosen route is almost all uphill. About half a mile past the pub is the first tough one, Gaters Hill, steeper than my Little Hill it leads up through an arch of trees, pretty but a killer on the calves. Thankfully it’s even shorter than The Little Hill but boy was I hot when I got to the top. Suddenly all the warm clothes didn’t seem like such a good idea.

From there it’s a ‘gentle slope’ up to the bottom of Chalk Hill where the houses are pretty, especially the little thatched cottage at the bottom but the climb is sweat inducing. This one is a hill and a half, it makes the Big Hill look like a slight incline. It’s one of those hills you get half way up and wish you’d never started. My legs were burning, my chest was burning and I’d have stopped to strip off my parka if I’d thought for one moment I’d ever get going again. As I hit the four mile mark I reached the summit with jelly legs, feeling like I needed a good lie down not another mile or so of walking. 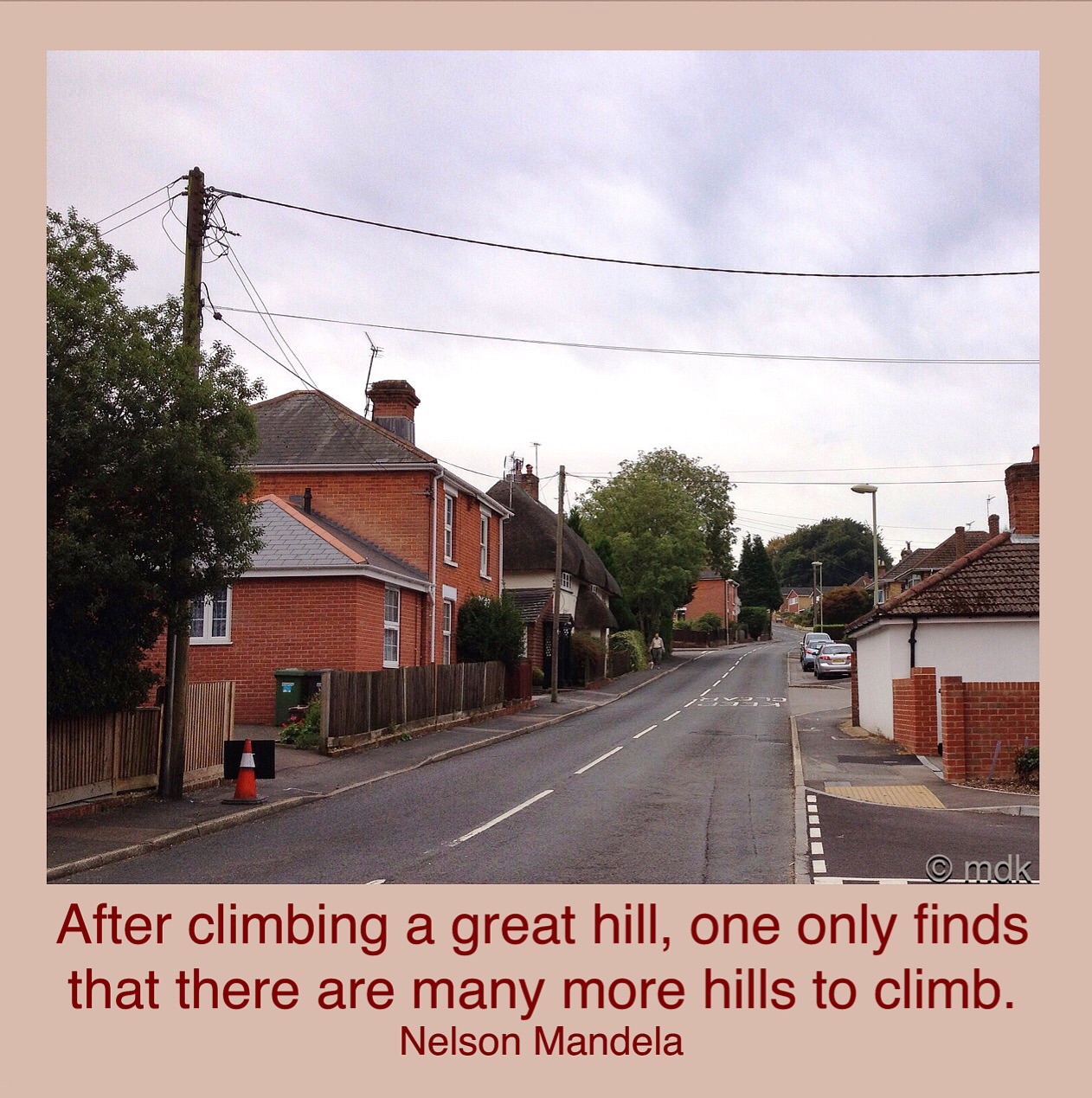 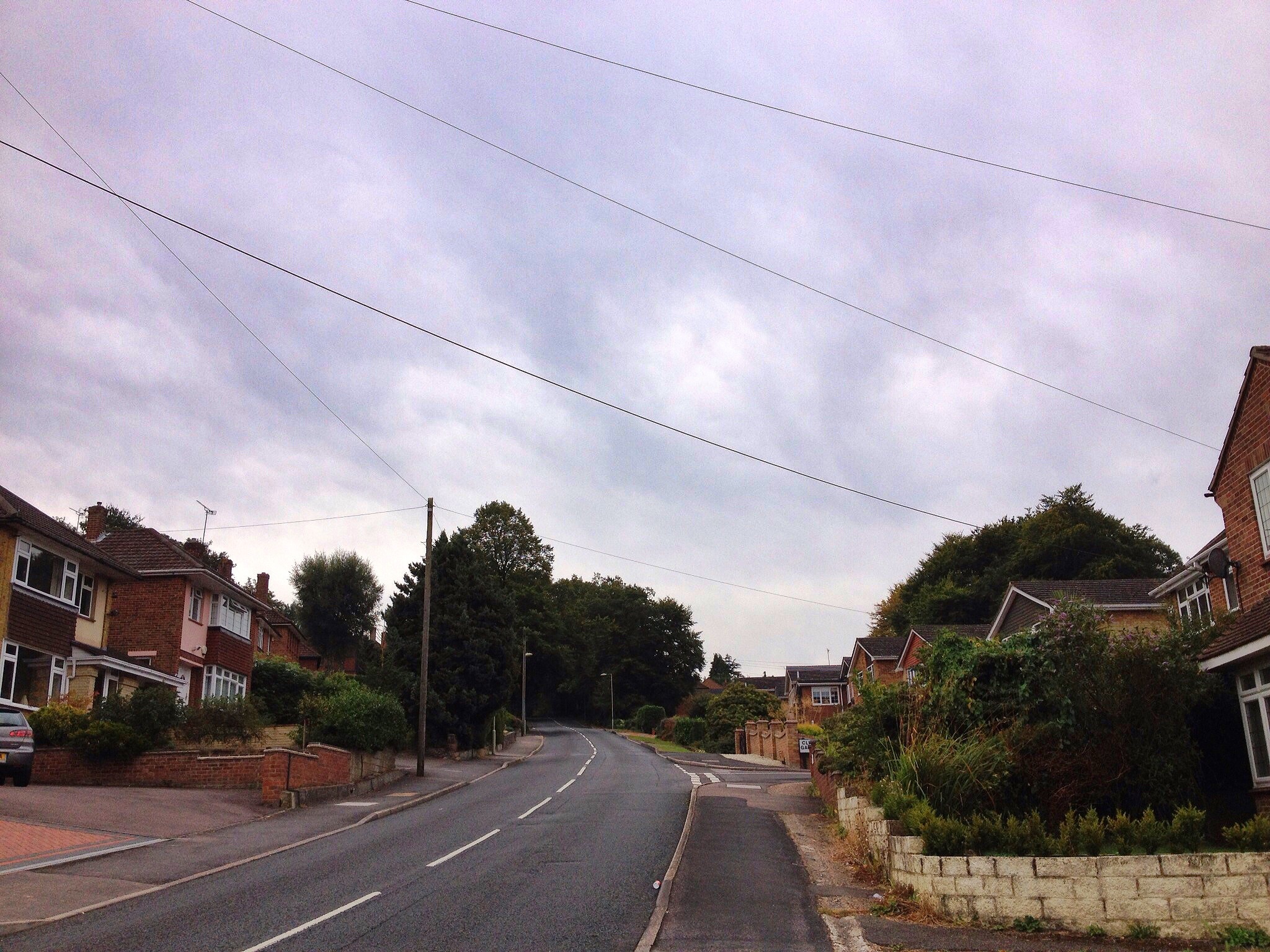 The hills were not quite over because the road leading to the village is pretty up and down but, to be honest, after Chalk Hill everything else feels like it’s downhill. I marched along, slowly recovering my breath and the use of my legs and, as if I hadn’t punished myself enough, took a bit of a detour through the village back roads to add a bit more mileage. I reached the shops just on the five mile mark and made a quick stop at my friendly local butcher to pick up my meat for the week. From there I had a quick dash round Sainsburys and finally I was on the downward slope to home, albeit with two bags of heavy shopping. The whole walk took two hours and totalled over six miles. Not too shoddy given the hills.

Never has a cup of coffee tasted better but I wasn’t quite finished for the day. Commando got up just as I was making my coffee and announced he was going to walk up to the village in a bit to get a new dressing gown. In a moment of madness, I said I’d join him. To be honest I needed to go back up there because I realised as I was putting the shopping away that I’d forgotten several vital ingredients for the meals I planned for next week. That’s what you get for popping to the shops unprepared and without a list, although, frankly, even with a list I usually manage to forget something.

So, after a short interval while he ate his breakfast, I trooped up The Big Hill once again. After Chalk Hill it didn’t seem that bad and, while that little thatched cottage looks very sweet, the walk up the hill to the shops would put me off even considering it as a place to live. Final tally on walking for the day seven point seven miles and two hours thirty five minutes. I’m still not sure I’ve made up for the lack of walking over the last two days but I suppose there’s always tomorrow.

Hill walking is great exercise there is no shadow of a doubt. Checking it out on the WLR database walking vigorously (is there any other way?) for two hours would earn me six hundred and seventy eight calories, hill walking, up and down vigorously for the same time would earn me nine hundred and eighty four calories. Now I’m not much good at maths but that’s over forty percent more as far as I can tell. So, if you happen to live near a killer hill, it’s a pretty good option for burning off the odd binge.

The other advantage to hill walking is it takes the intensity to a whole new level, gives the legs and bum a real good work out and will definitely help you get nice toned and well defined leg muscles along with a more shapely posterior. It is also a great cardiovascular exercise, hence all the huffing and puffing and the sweating and beetroot face. Even walking down again is good for you because it targets a whole different set of muscles and, as you’ve just raised your metabolism on the upward stretch, the down hill part isn’t really harming the calorie burn.

If you want to try it out I’d suggest starting with smaller hills and building up slowly. I’m used to hills don’t forget and even I struggle with mini mountains like Chalk Hill. When going up, it helps if you shorten your stride and, if you can, keep the rhythm of your steps the same. Try to keep your breathing slow and steady and, if you find you’re struggling slow down rather than stopping. Once you stop you lose momentum and on a steep hill it’s very hard to get going again. You’d be surprised what you can push through just by slowing a bit and keeping going. If the worst comes to the worst try zig zagging for a while, you may be walking further but you’re taking the intensity out of the incline and it will give you a little recovery time. When muscles are screaming out for mercy, turn around and go backwards for a few feet to give them a rest.

Walking sticks or poles can help with the real tough climbs. I certainly took advantage of them when I climbed Vesuvius and I could have done with some on the climb to Park Guell in Barcelona or the other week at Durdle Door. Pity there isn’t a way to fold them up and keep them in your pocket for emergency hills really. Make sure you have a good stretch afterwards as well, to stretch out your leg muscles and avoid aches later. If you do have a go, you’ll quickly learn that reaching a tough summit is a very rewarding experience, not least because there are almost bound to be some interesting views.