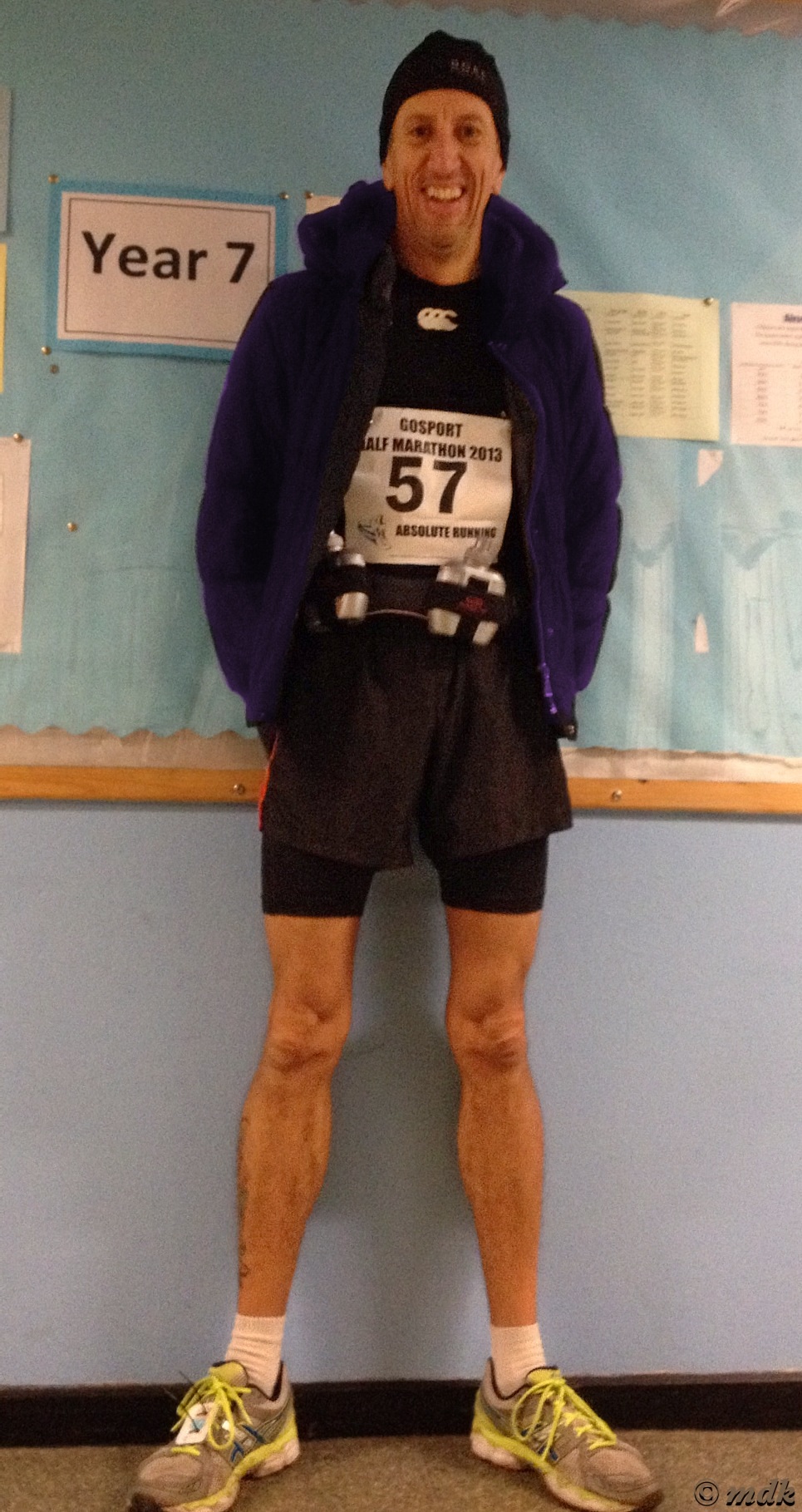 Saturday 16 November 2013 was completely devoted to food. First there was a wander around Sainsbury’s with a basket that ended up so heavy I could hardly carry it. “Why didn’t you get a trolley?” Commando said when I moaned. The simple answer was, if I could fit it in a basket I knew I could carry it home. Even so the walk back down the hill was a struggle with four heavy canvas bags, two slung over each shoulder. After that it was packing away food and cooking food. Seriously, all I did all day was that and a quick bathroom clean. The kitchen was filled with containers of curry, home made curry pastes, pastas and a chicken noodle stir fry. The reason for all this mad Saturday activity was the Gosport Half Marathon.

17 November 2013
Gosport was the first ever half marathon Commando ran and today he was running it again. As usual, I was his back up crew. We had an early start and a leisurely drive down to Gosport with only a little tiny bit of getting lost followed by a circuit of a roundabout and some going back the other way.

Once Commando had stripped off to his shorts and t-shirt and dropped off his bag at Bay House School he was feeling a little cold. With my combat trousers, long sleeved t-shirt, hoodie, scarf, hat, gloves and warm down filled Ted Baker jacket I was toasty warm, until he asked if he could borrow my jacket until the race started. I could hardly say no could I? Still, it was almost worth feeling a tad chilly just to see him squeezed into my very girly blue padded jacket. The parka would probably have made him look slightly less like a transvestite about to run a half marathon.

Once the race began I got my coat back. Commando ran off in one direction and I walked off in the other towards Stokes Bay. Last year I’d walked along the shore with Lee on Solent behind me towards fort Gilkicker, this year I decided I’d walk the other way and see what Lee on Solent had to offer. When I got to the diving museum I was pretty tempted to stop off in the cafe for a warming cup of coffee but it was already crowded with other race widows so I took a couple of photos instead. 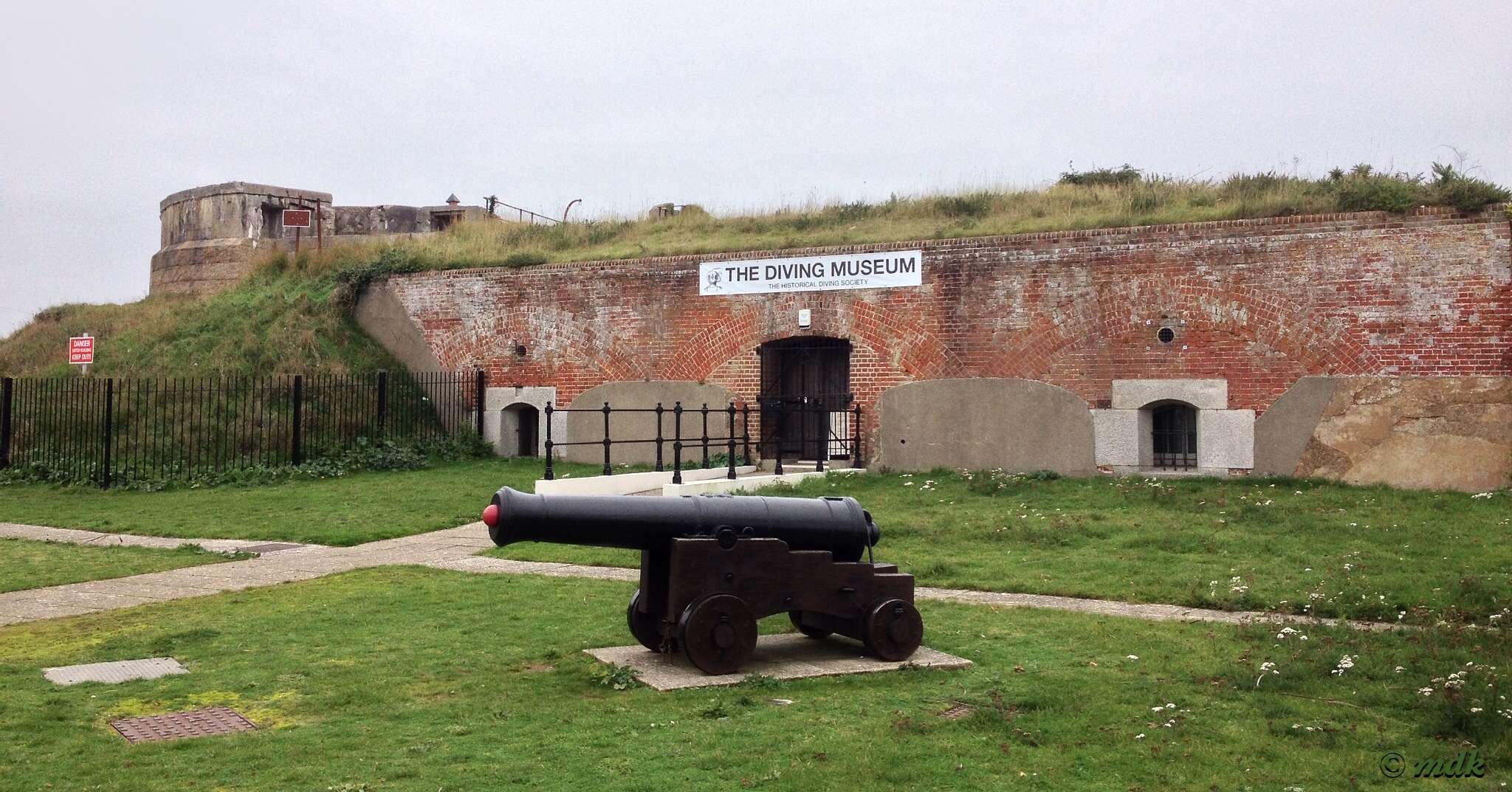 The low, barred windows were quite interesting, although I don’t imagine they let much light in, and the heavy wooden door, protected by more bars and surrounded by an arch of old red brick was worth a closer look. Unfortunately the museum was shut and the path up into the fort above it was inside the wrought iron fence. I’d have quite liked to go up and have a look at the view from there. 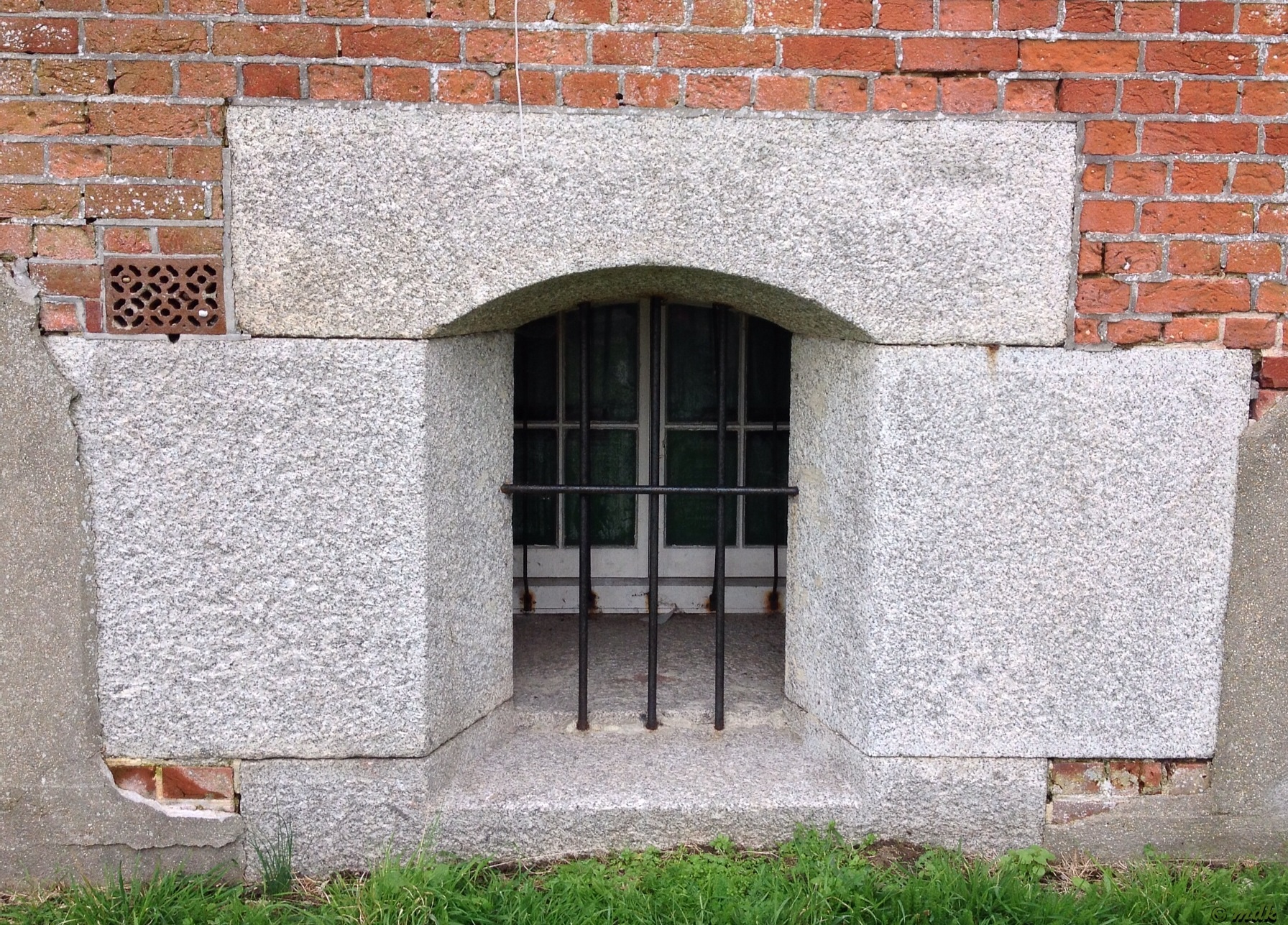 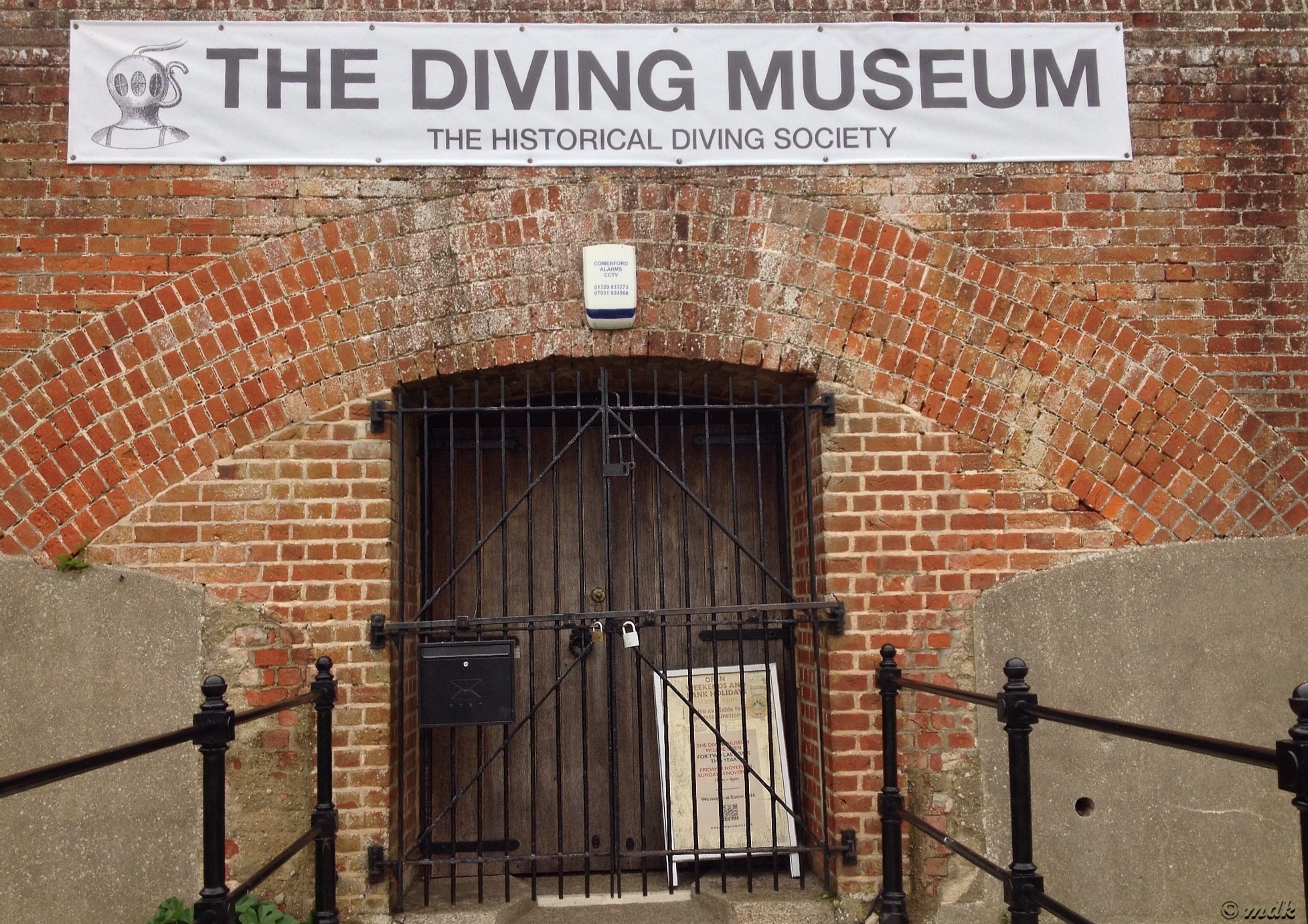 I was pretty sure there were shops and cafes at Lee on Solent but not how far away they were so I set off along the shingle beach. Anyone who’s ever walked on shingle will tell you it’s tough going, especially deep loose packed shingle like this beach. My feet were sinking in, ankles bending this way and that, the crunch, crunch, crunch rhythm of my steps drowning out the sounds of the sea. With the grey sky and grey sea it was not the pleasant walk I’d envisioned but I pressed on figuring there had to be a path sooner or later. What a contrast to last year. 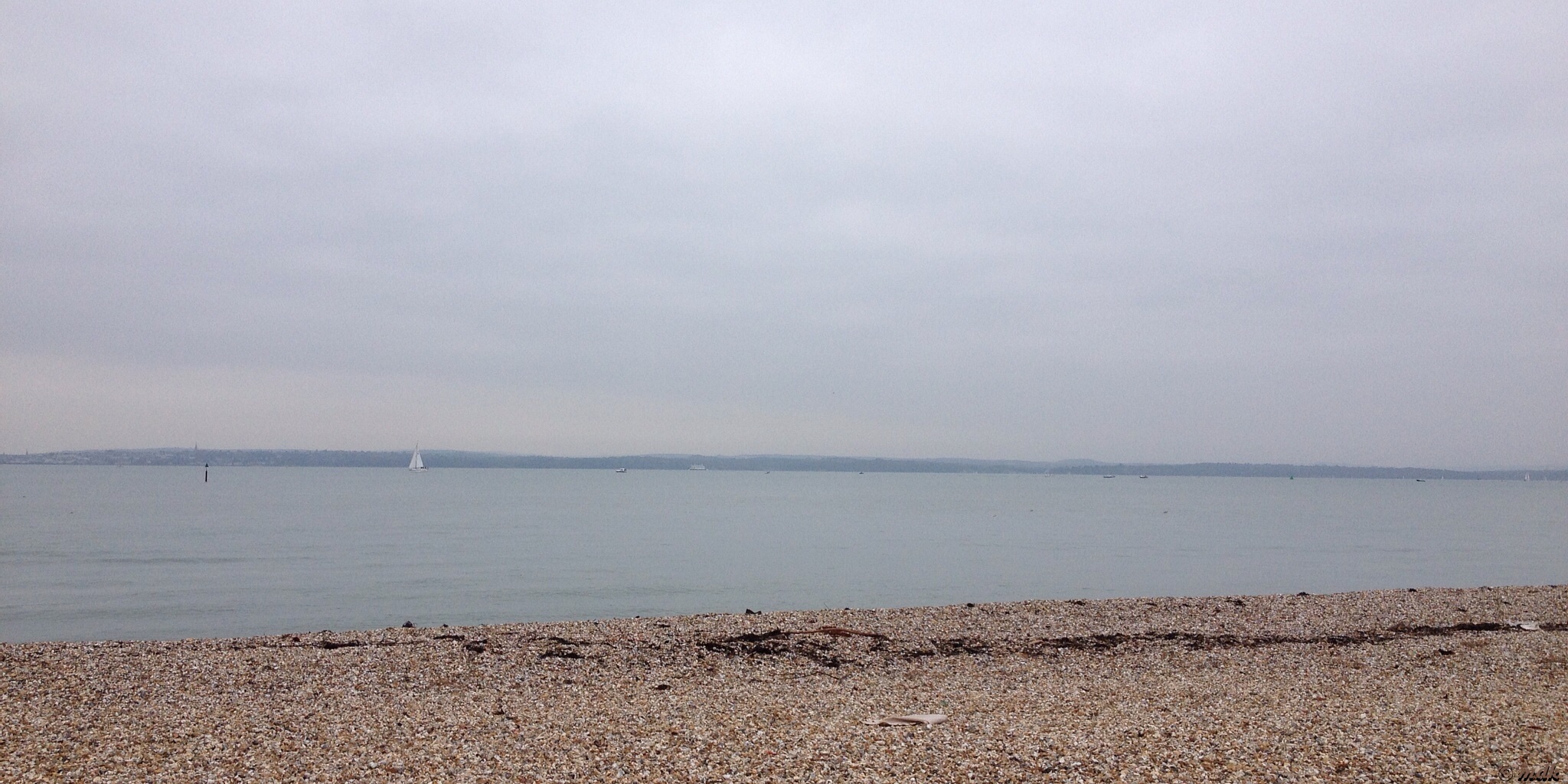 Almost two miles in and there was no sign of a path, just more shingle. My legs were getting tired and the most interesting things I’d seen to take a picture of was an old length of rusty chain, some red seaweed along the tide line and about a billion stones Not a cafe or shop in sight and the crunch, crunch, crunch was beginning to get on my nerves. 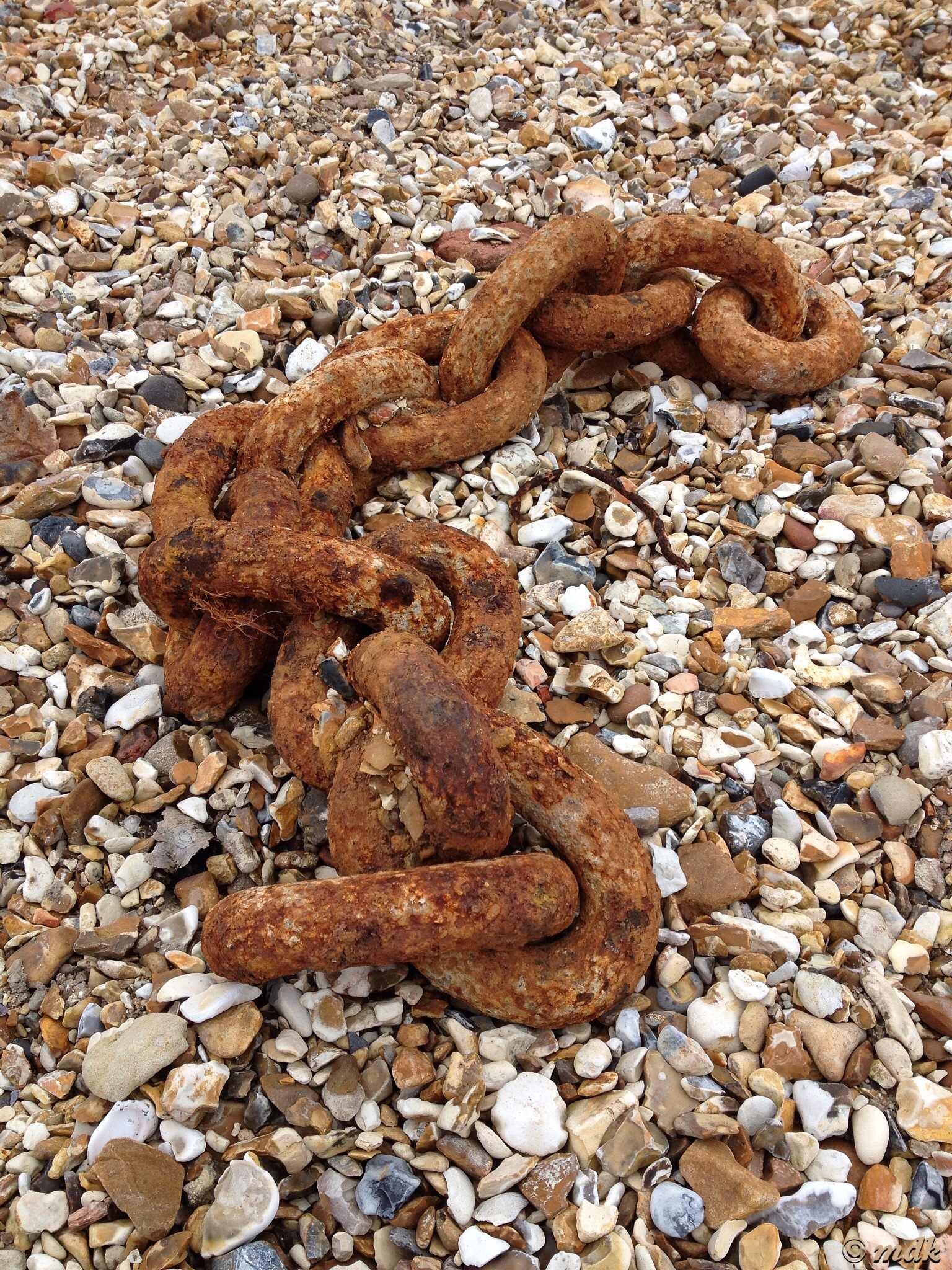 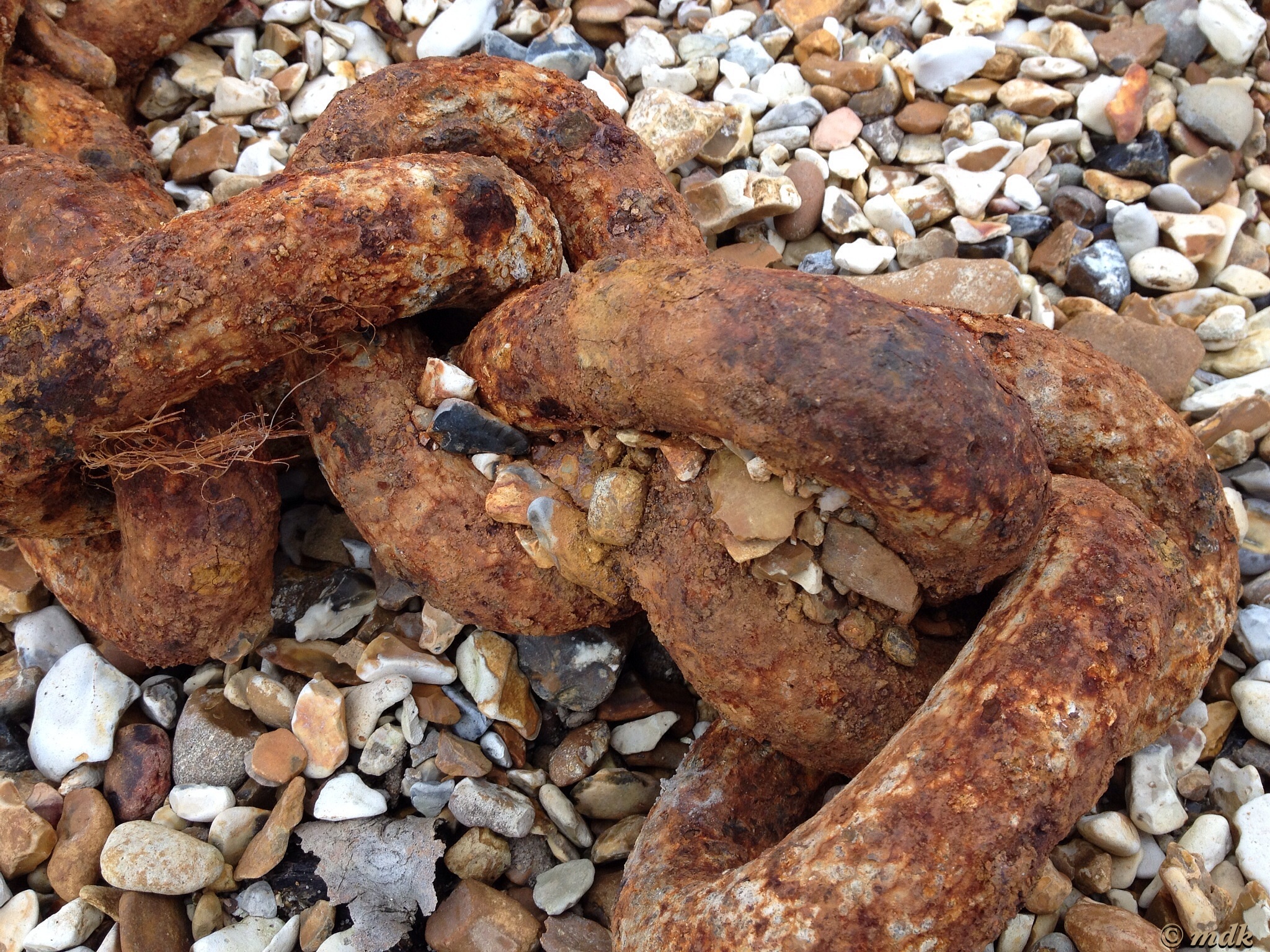 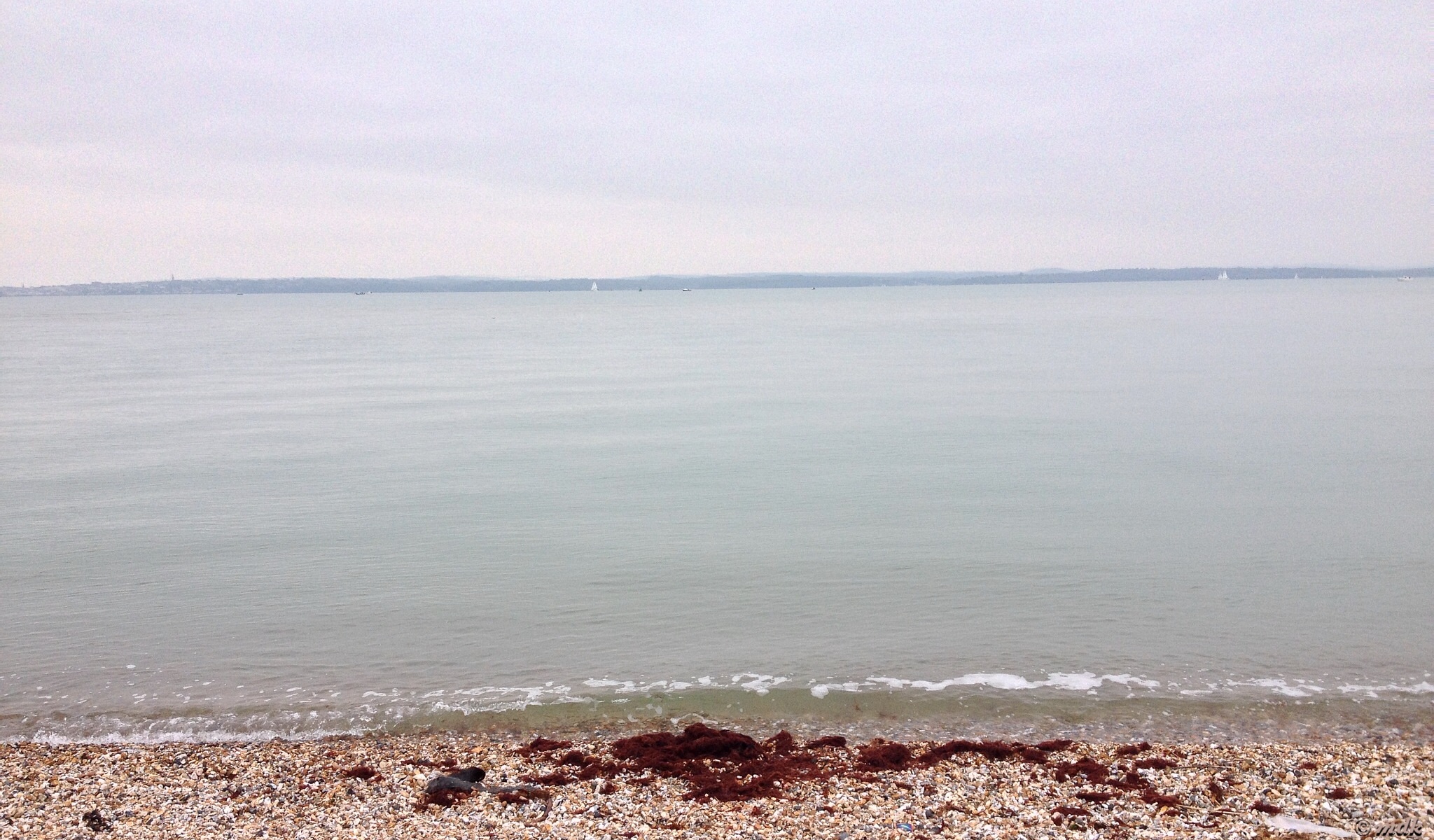 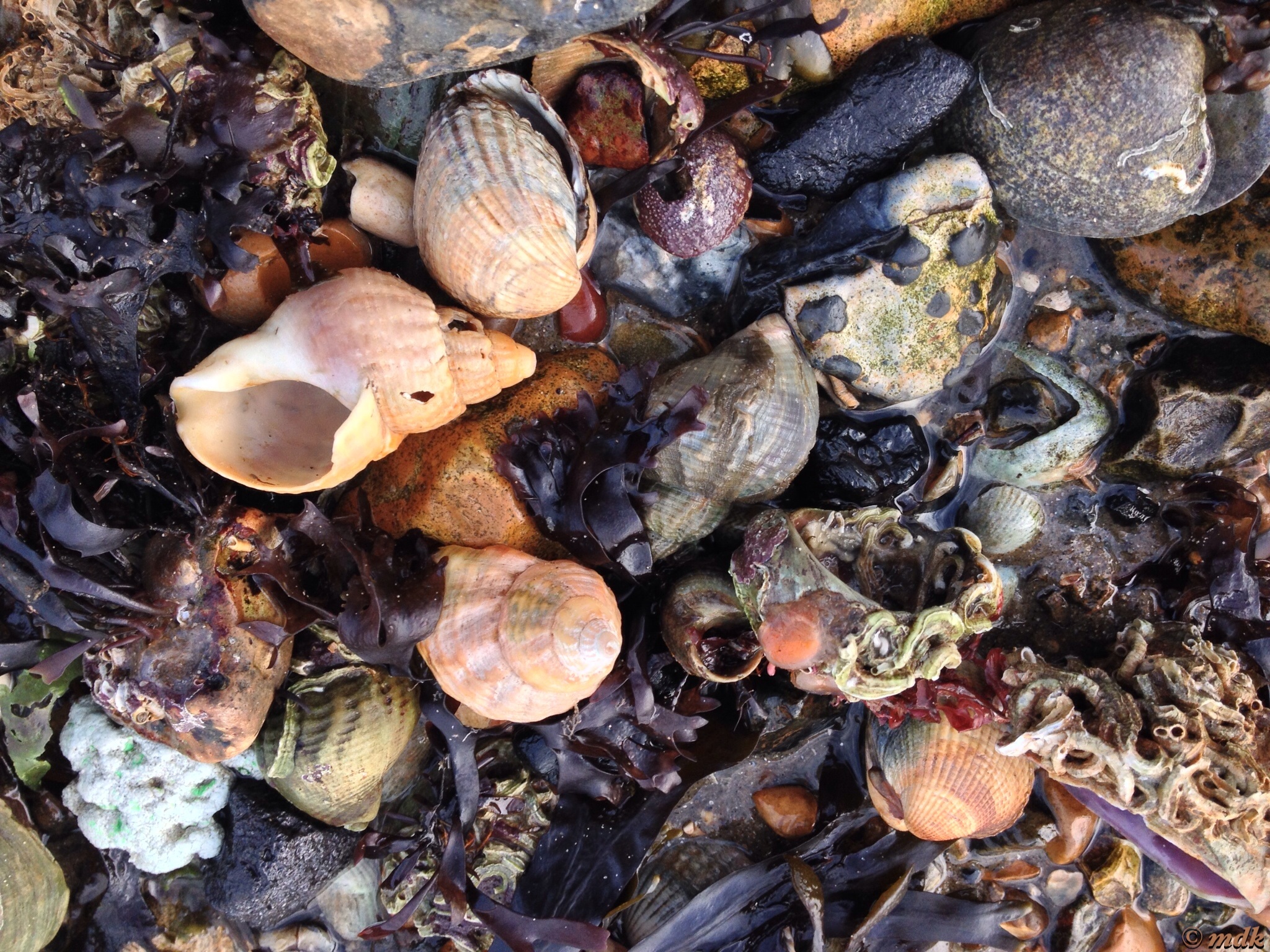 Eventually I reached a steep bank dotted with burnt gorse and just beyond it a path. I can’t begin to tell you what a relief it was to get off that shingle. The path was lined with marshals awaiting the first runners, I’d stumbled onto the race route. Overhead a glider was soaring in the grey sky and in the distance I thought I could see shops so I made for the road. Perhaps there would be a cafe and I’d get my coffee after all, although I was running out of time if I wanted to be on the finish line for Commando and I certainly didn’t want to get caught up in the runners. 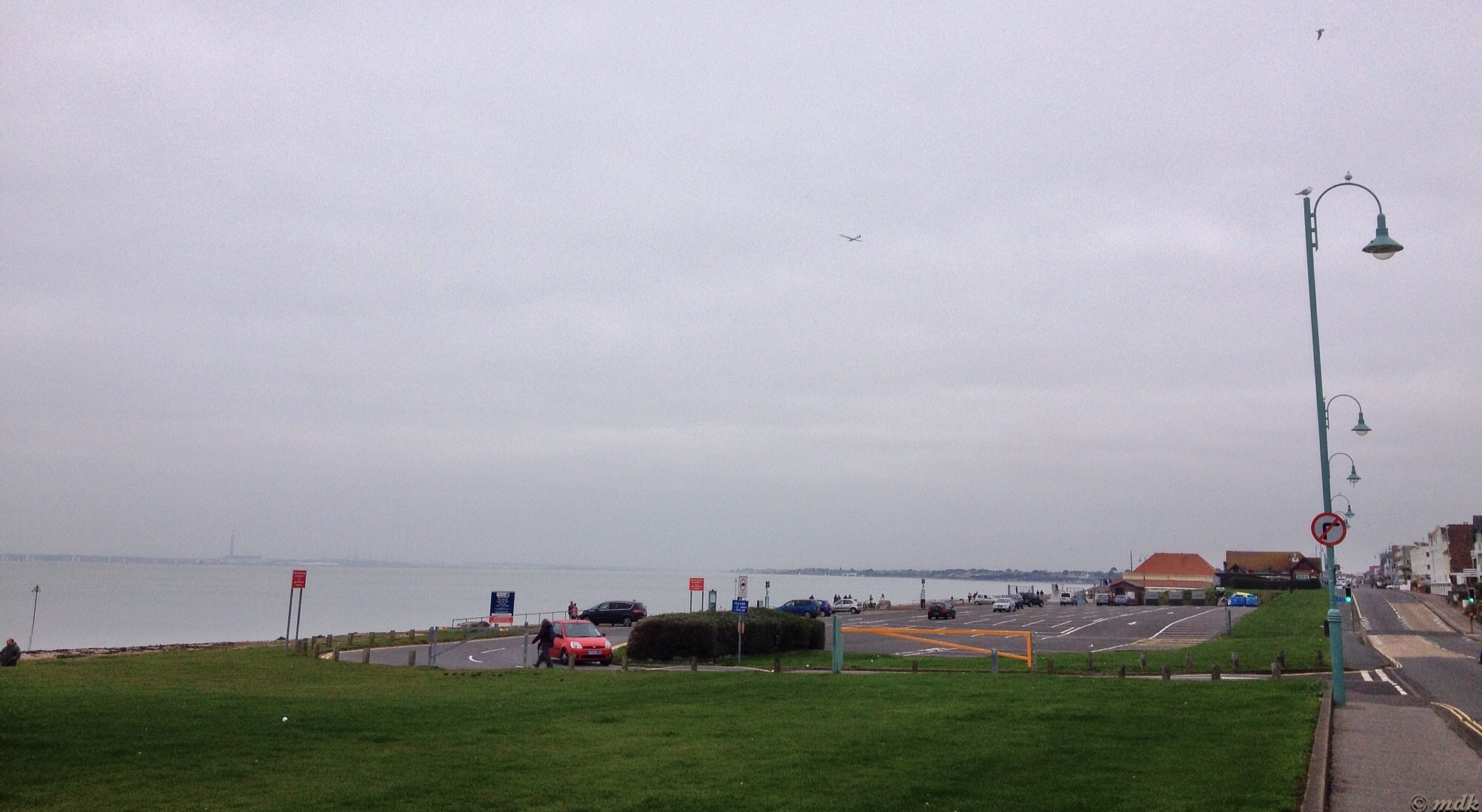 The shops, when I got to them, turned out to be a disappointment, mostly closed and not a take away coffee place in sight. In the end I had to content myself with a chocolate milk I found in a Tesco Express on the corner. The thought of walking back along the shingle didn’t appeal very much, especially as time was of the essence, so I decided to try the road route and risk getting mixed up with the runners. At the Lee on Solent signal station the masts of all the little ships were singing in the sea breeze and I was glad of my choice even if, by this time, a few runners were passing me. Instead of the blue sky and blue sea I’d hoped for I had to content myself with the bright blue covers on the boats. 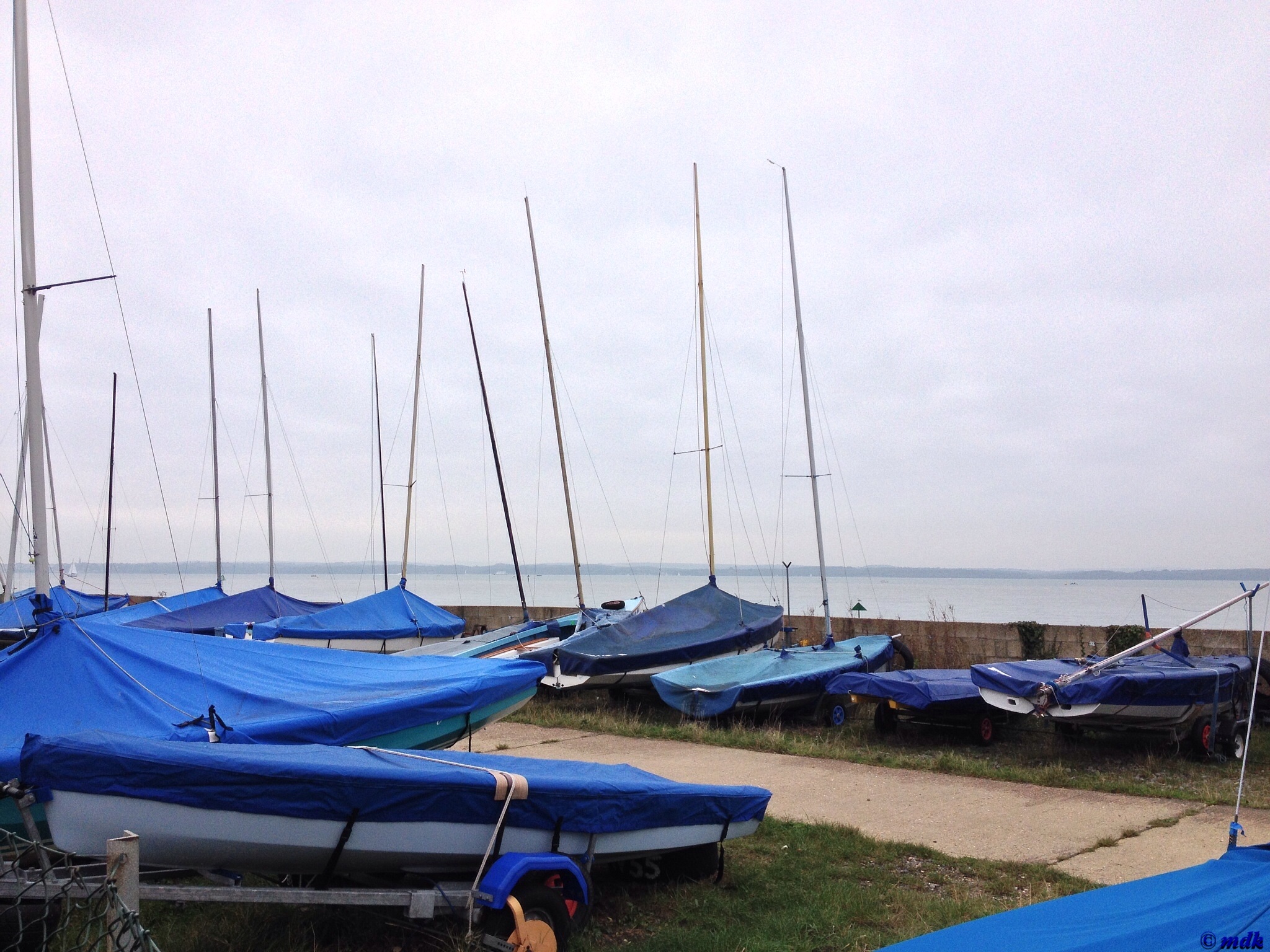 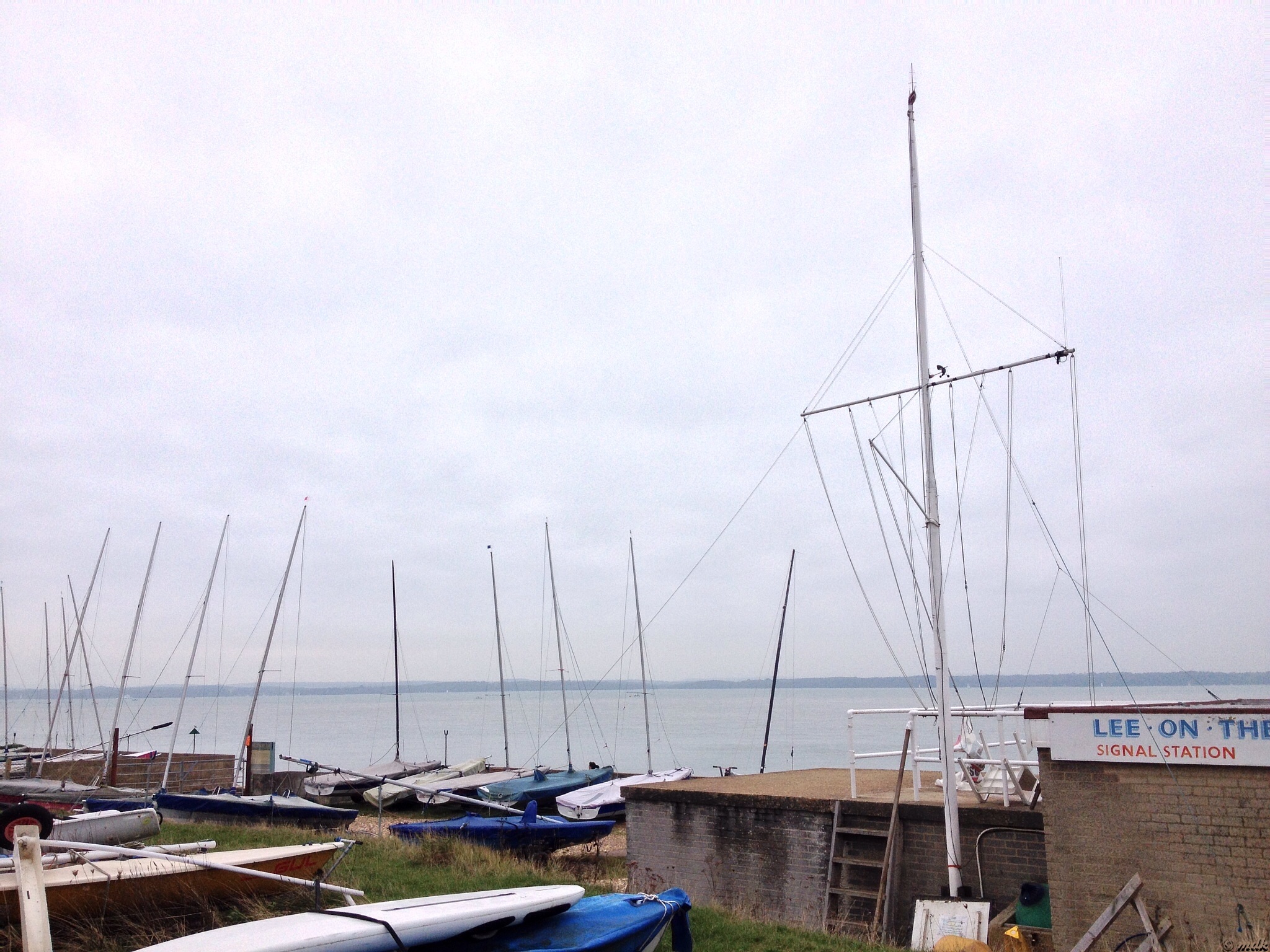 Lots of the houses along the sea front had balconies overlooking the sea, many of them filled with people cheering on the runners. On a sunny day the views must be splendid. If I’d had more time I’d have stopped and taken a few photos, as it was I took one, of a very unusual cream coloured house, a row of round windows on the ground floor and a balcony with three brick arches. Just my kind of house. 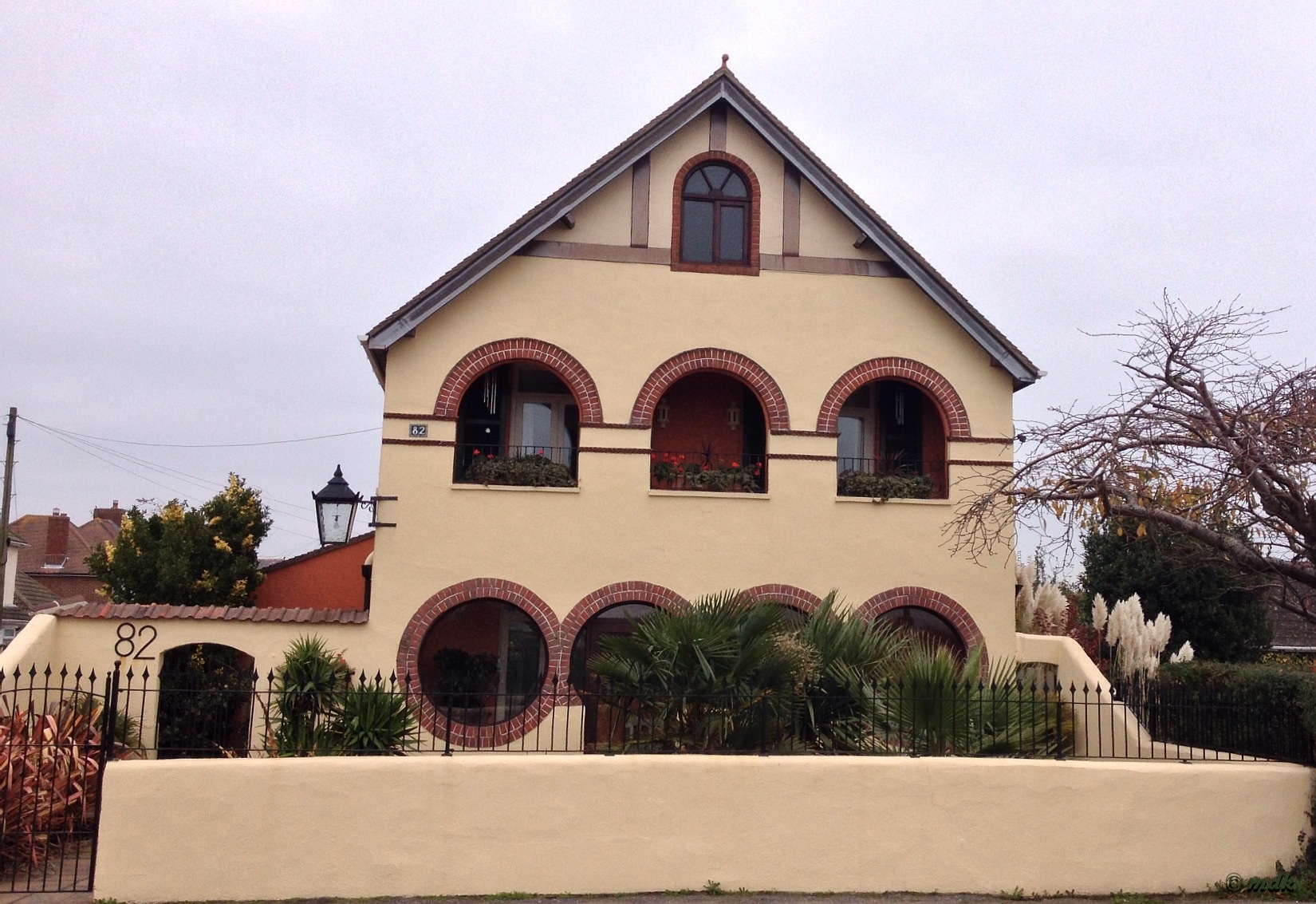 The finish line was crowded when I got there. The only space I could find with a view of any kind was a few yards before it so I staked my claim and stood around waiting, drinking my chocolate milk and clapping the runners passing by until my hands hurt. Thankfully I didn’t have long to wait before I spotted a familiar figure running towards me. He looked pretty comfortable for someone who’s just run thirteen point one miles and, yet again, he beat his personal best finishing in one hour forty nine thirty six, under the magical one hour fifty. At this rate he’s going to meet himself on the start line. 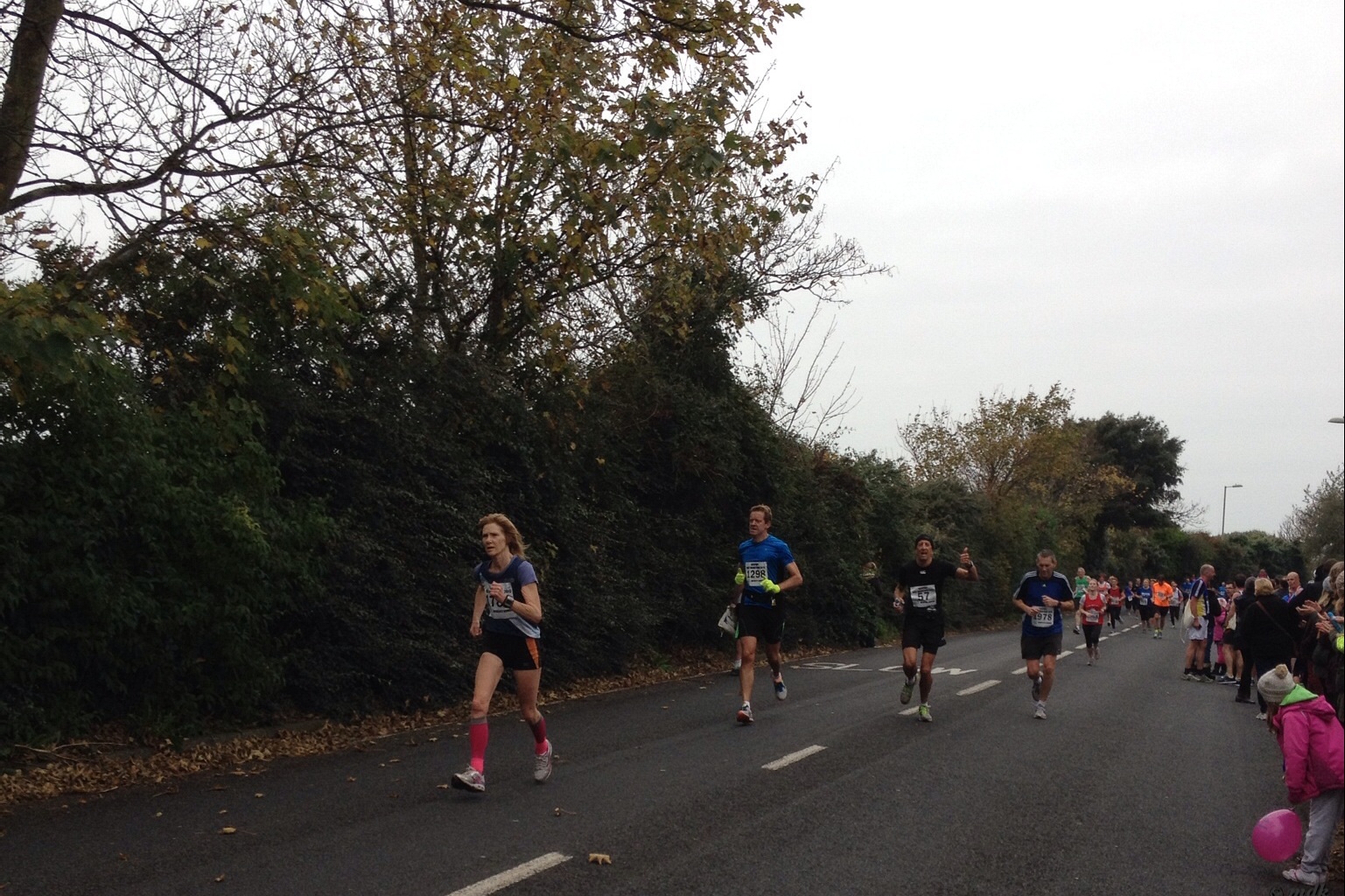 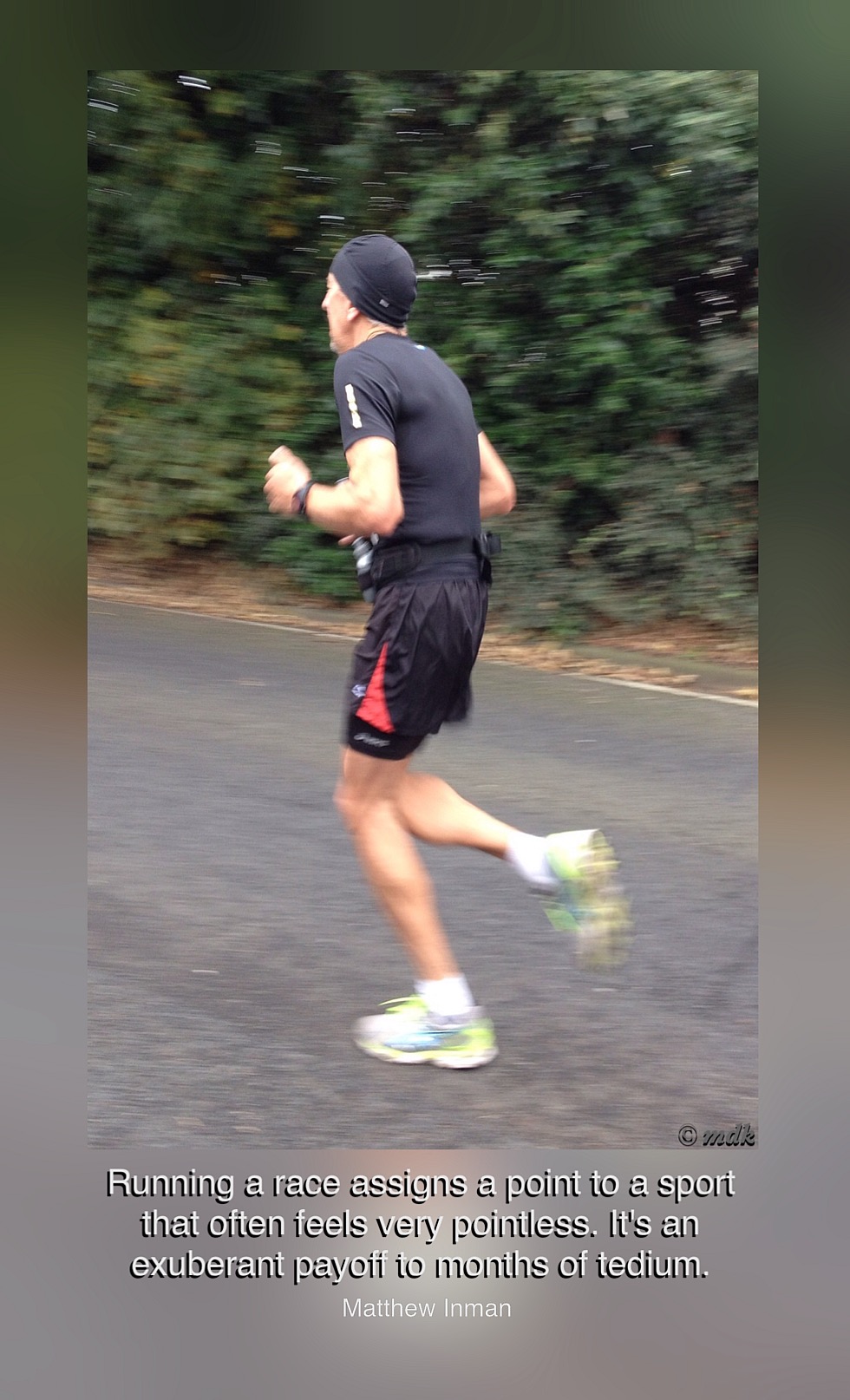 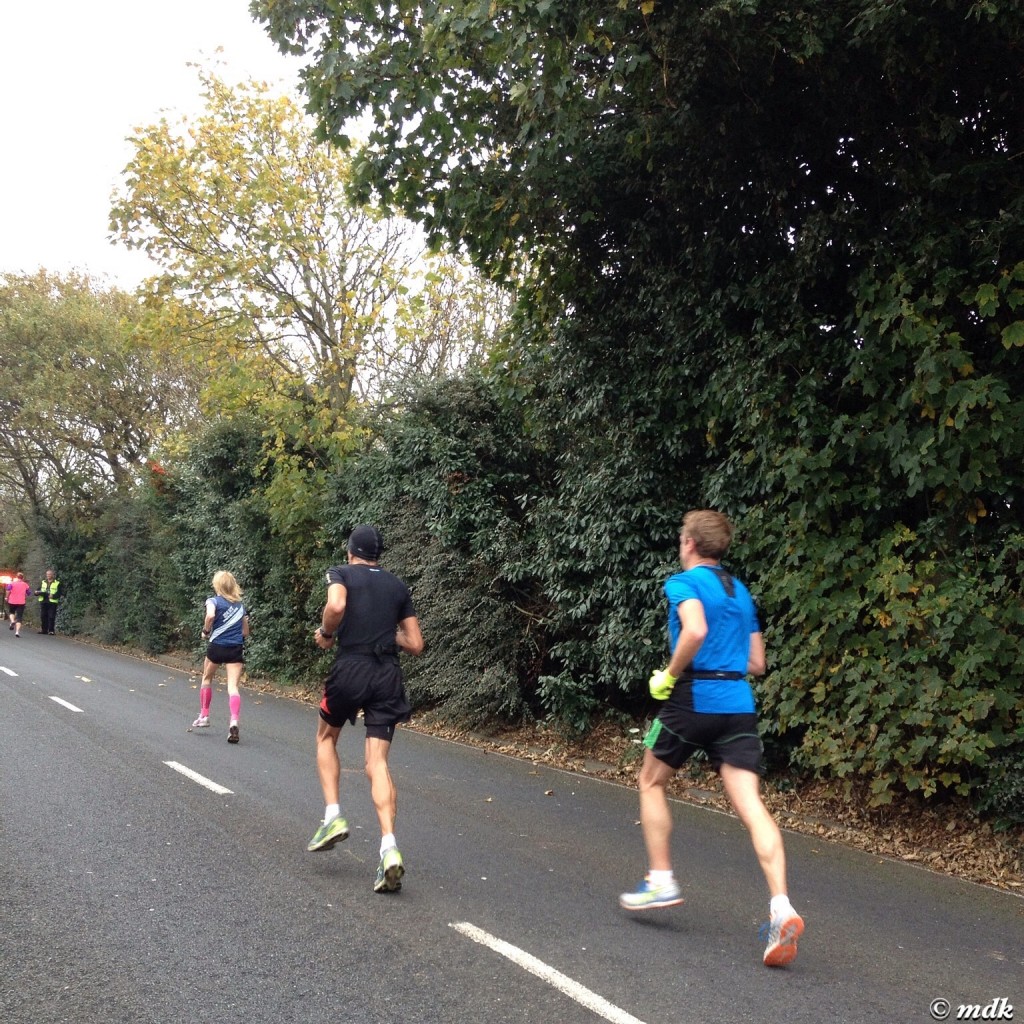