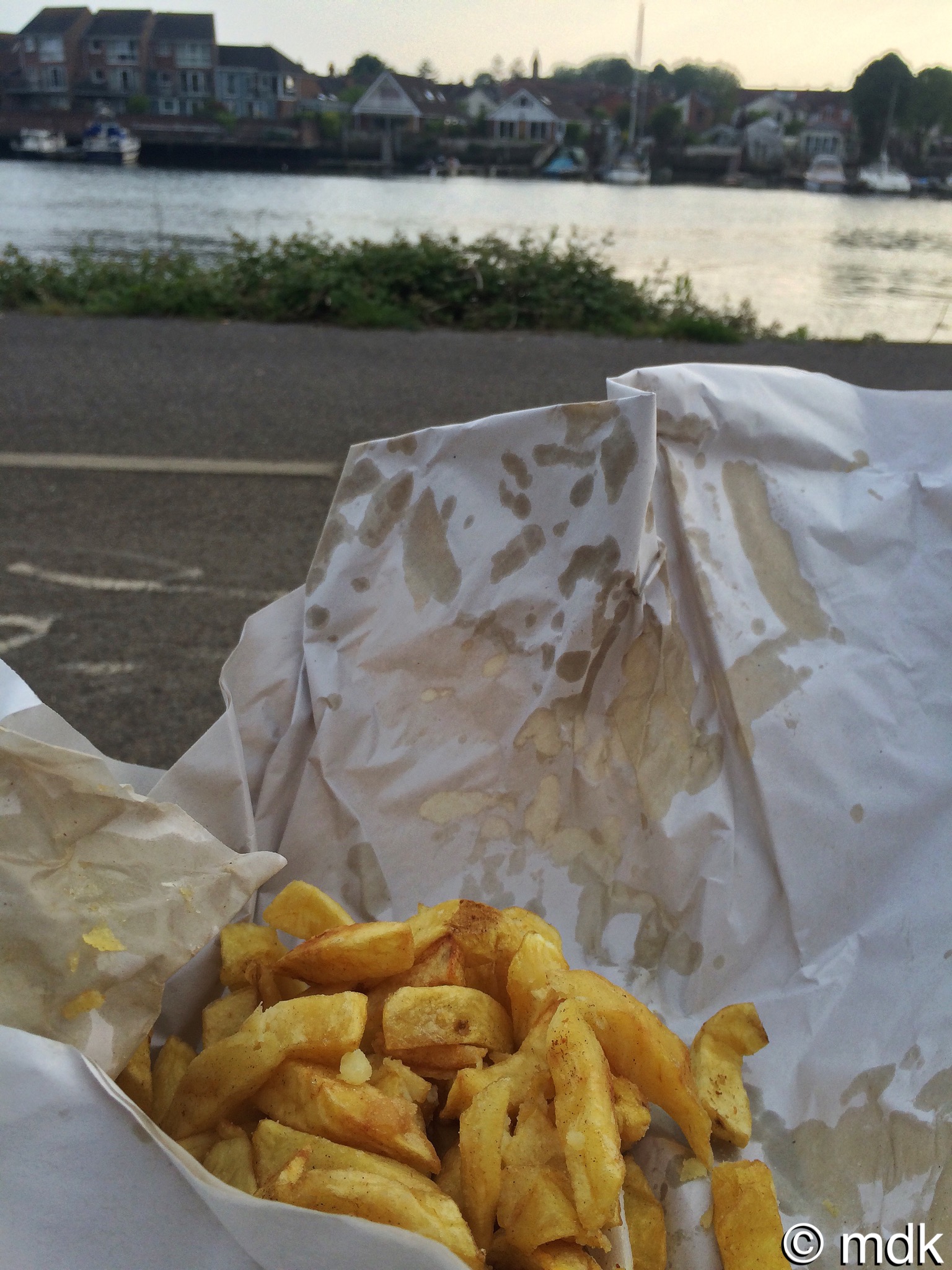 It’s been an odd couple of days. First there was a small disaster with a WordPress update that had my heart in my mouth for a while until I called the winderful people at LCN. Of course they sorted it all out for me quick smart, much to my relief. Then there were lots of little errands to run, eating up miles but nothing that could really be called a genuine walk followed by sitting at my Mac working on my first Itchen Spitfires’ newsletter. By Friday evening the newsletter was all but ready and I needed to get out and stretch my legs. As I also realised I’d not eaten anything since breakfast I thought I’d take a wander down to the Butcher’s Hook pub, have a coffee and a look at the final piece of the Roam Art Trail puzzle then maybe get some chips from the chip shop.

CJ, with his eye on the chips, said he’d come along. When we got to the pub though it was full to the rafters, even the tables outside were full to bursting. It was disappointing but not a complete disaster.
“Let’s get the chips first, sit by the river and eat them and try again,” I suggested. “The pub might be less packed by then.”
So we crossed the road and got our chips. We don’t have chips all that often but this is not our usual chip shop. It turned out to be a good choice though. The owner was chatty and friendly and we discovered they have a special fryer for gluten free chips, fish, sausages and the like. This may not be a big deal to most people but a friend of ours is gluten intolerant so we made a mental note to tell him about it when we next saw him.

With our parcels of chips wrapped in paper we crossed the road again and strolled down to Riverside Park. There were rather a lot of seagulls gathered near the park entrance so we walked a little further along so we could eat our chips undisturbed. For a while we munched away more or less in silence. They were good chips! 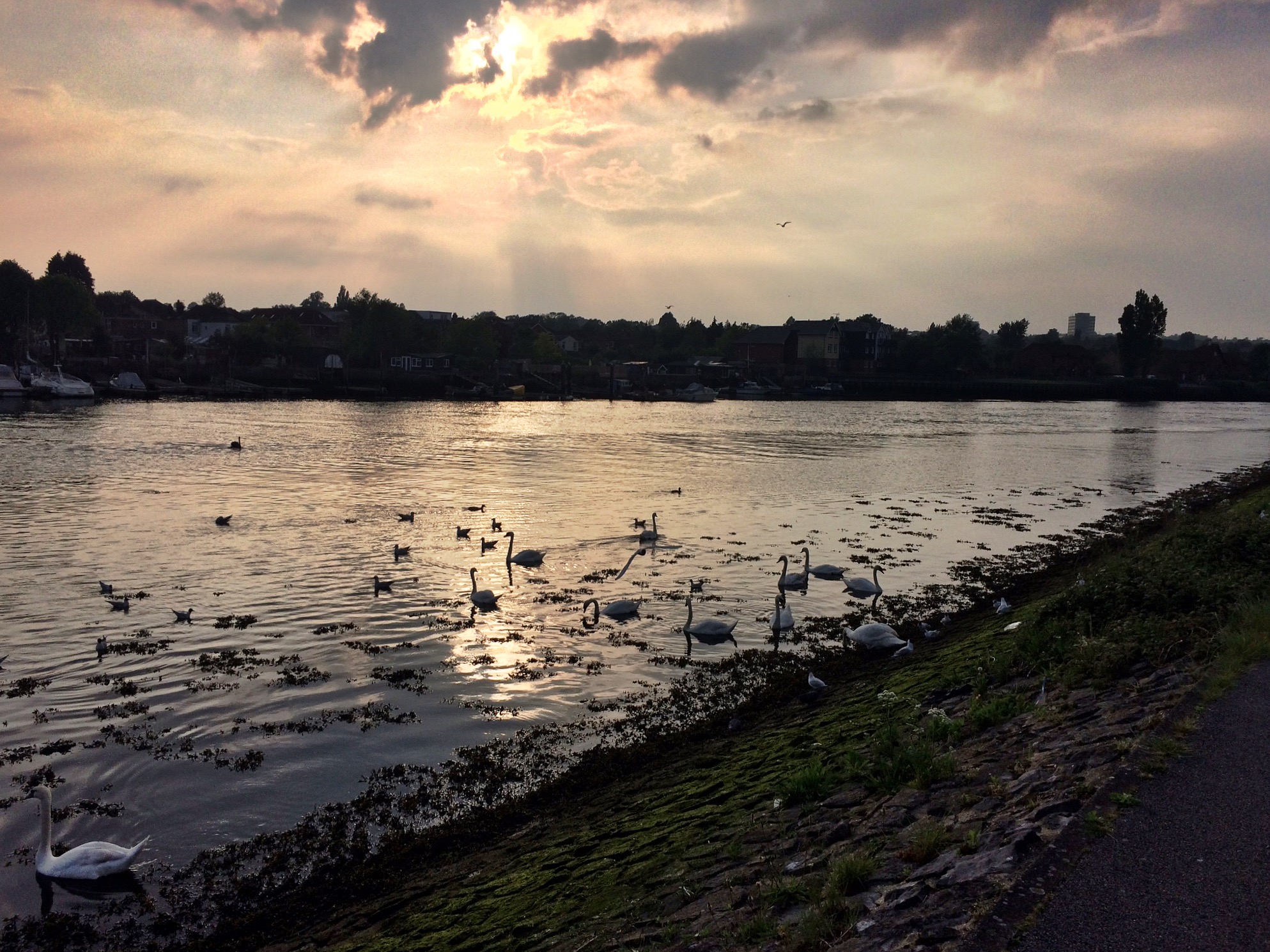 As usual there were far more than I could eat and soon I was flagging. In fact even CJ was full before his chips were gone.
“How long do you think it would take the seagulls to notice if I dropped a chip?” I asked.
“I shouldn’t think it’d be very long,” he said.
So I dropped one. The gulls were at least two hundred yards away, probably more like three but the chip had hardly hit the ground before the first one arrived. Within seconds the whole posse had relocated and were sitting right in front of us. I began to throw chips. The gulls went wild. For the most part the chips were caught mid air, those gulls are quick as lightning.

We spent a happy twenty minutes or so throwing chips to the gulls before we ran out. Stupidly we were so absorbed we took no photos. By this time the sun was beginning to set so, with a quick scan of the river for cygnets, we strolled back along the path. Sadly there were no cygnets, black or white and the sunset hadn’t quite turned the snow geese to gold by the time we left the park. 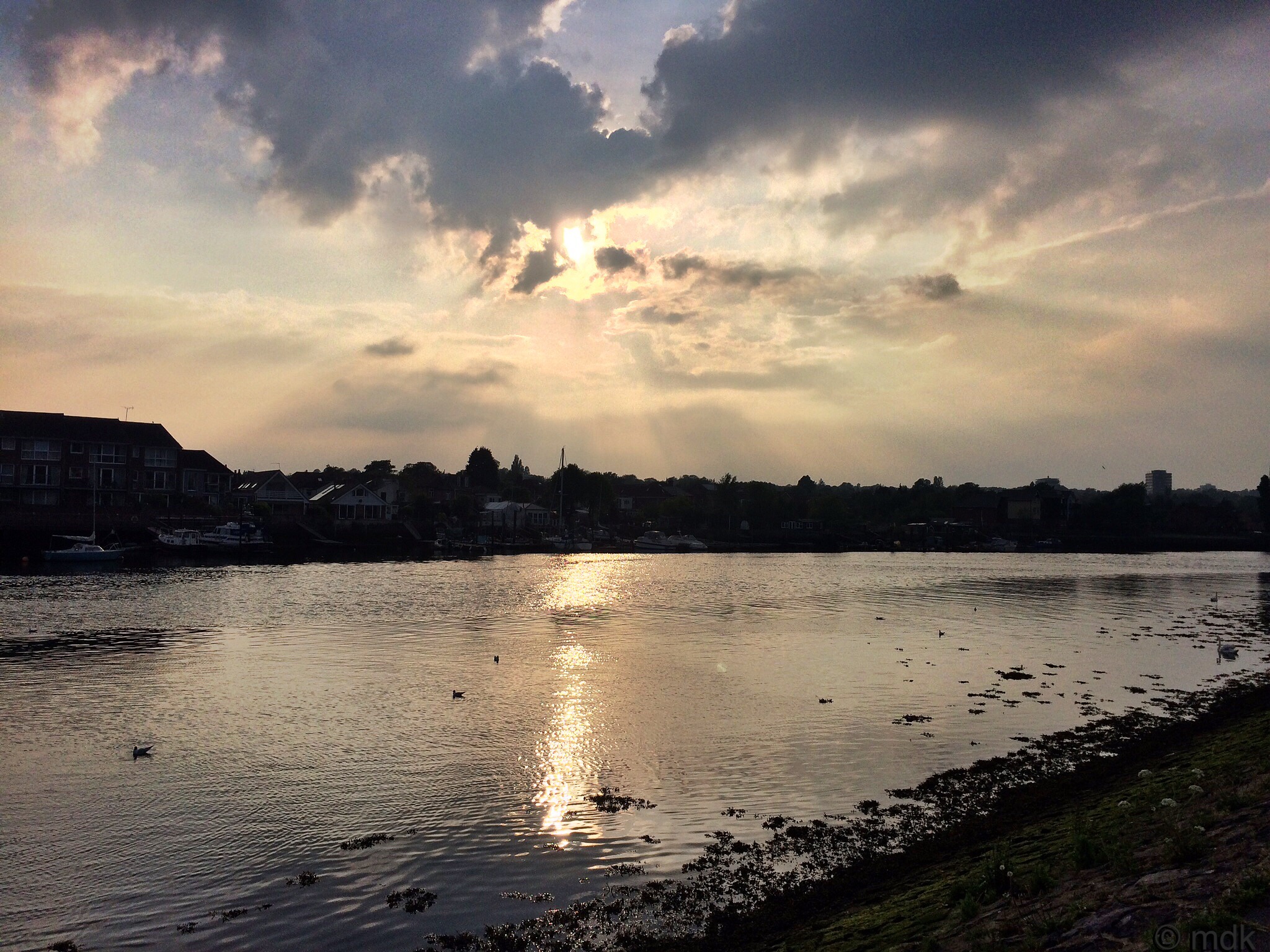 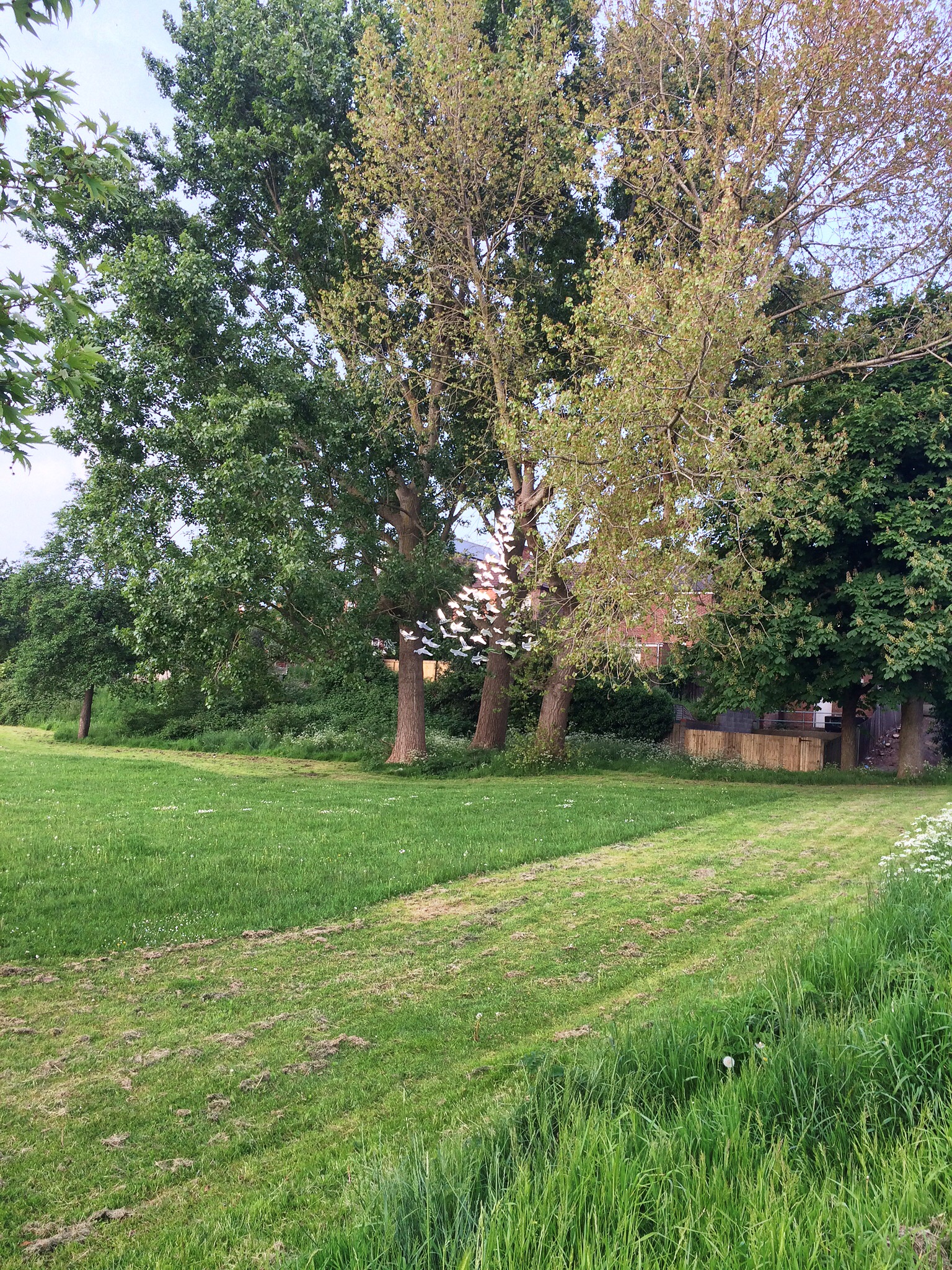 The Butcher’s Hook was slightly less crowded but not enough to get inside and get a coffee. It’s actually a very small pub, once a butcher’s shop, as the name suggests so it doesn’t take many people to fill it.
“Never mind,” I told CJ, “we can try again another day. Next time we’ll come earlier and try to get here before it opens.”

This morning I had a date to walk the parkrun with one of the Spitfires. She’s heavily pregnant and, not being able to run at the moment, has taken up power walking to keep up her fitness. A week or two ago she asked me if I’d walk parkrun with her.
“I’ll try not to slow you down too much,” she said.
Her PB for the walk was around forty five minutes, which is not bad going for 5k, even for someone who isn’t due to give birth in four weeks. My parkrun PB, OK my only parkrun, took 42.52 and I was chasing after long legged Russ then, so I had an idea it might be me slowing her down.

The Common People music festival was on at the Common so parkrun was relegated to the course no one likes, the one that loops twice up the hill at the top. It looked as if no one would be getting a PB today. As Commando walked across the common towards the Cowherds and the start line I spotted two swans on the newly repaired and refilled boating lake. 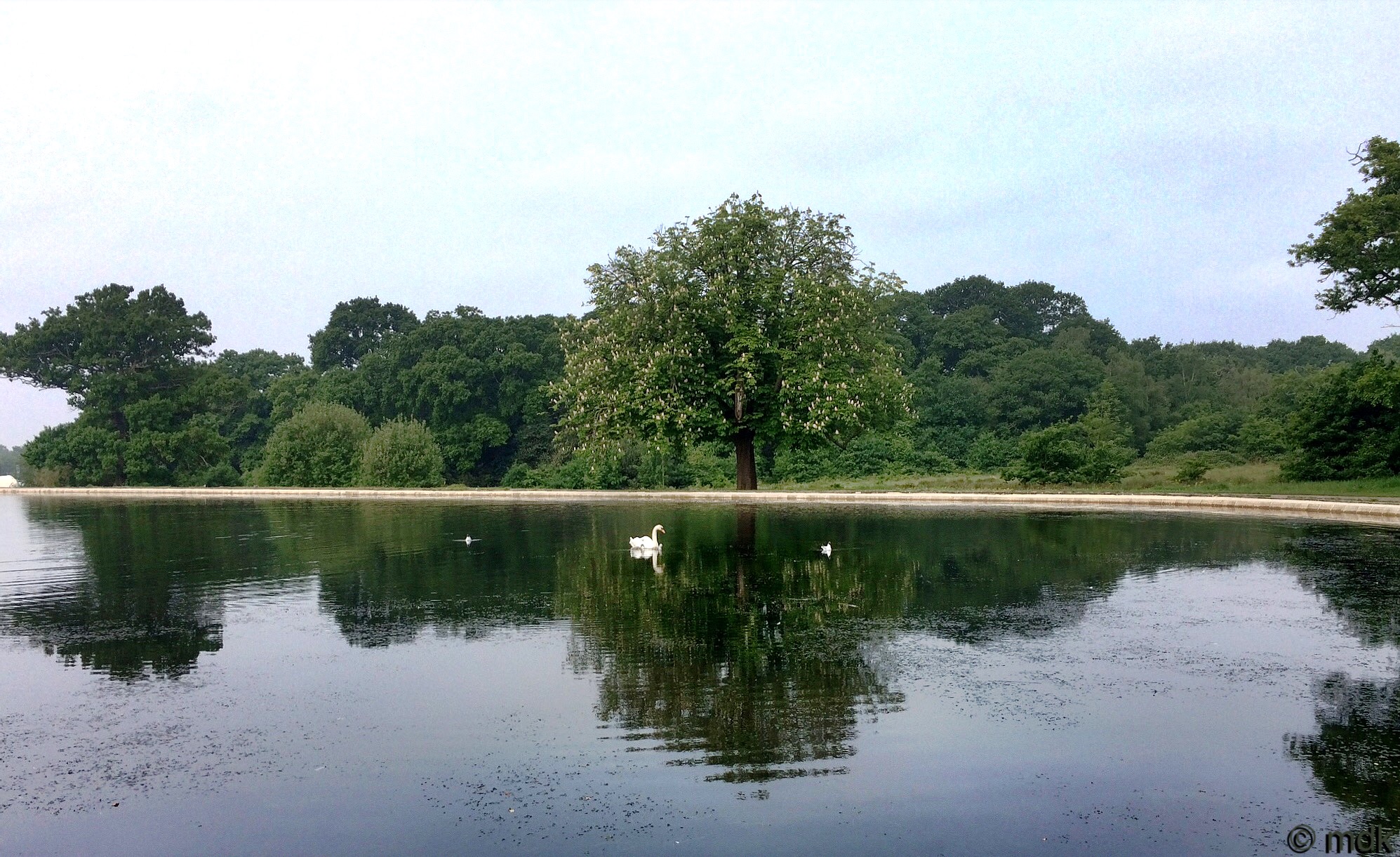 A few steps later and I thought I saw cygnets, two of them swimming beside their mother. They were on the other side of the lake and we didn’t have time to go and have a closer look but, as we walked, I squint d towards them and snapped away with my phone. 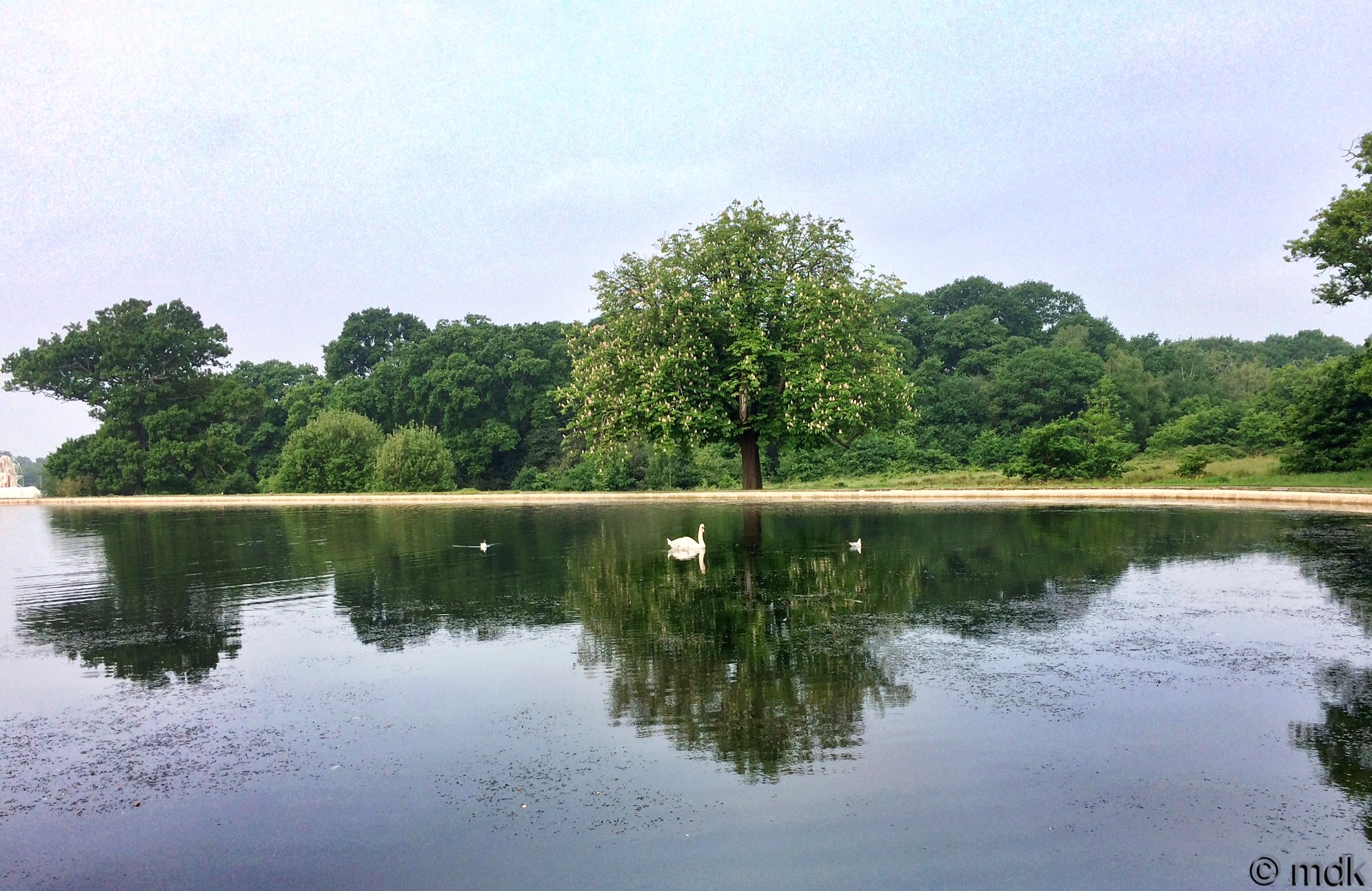 Closer still and I could clearly see two fluffy grey cygnets swimming in the wake of the pen.
“Isn’t that one on her back too?” Commando said.
His eyes are better than mine but he was right. Riding on the pen’s back was a third cygnet. Why do these things always happen when I can’t get a clear photo? 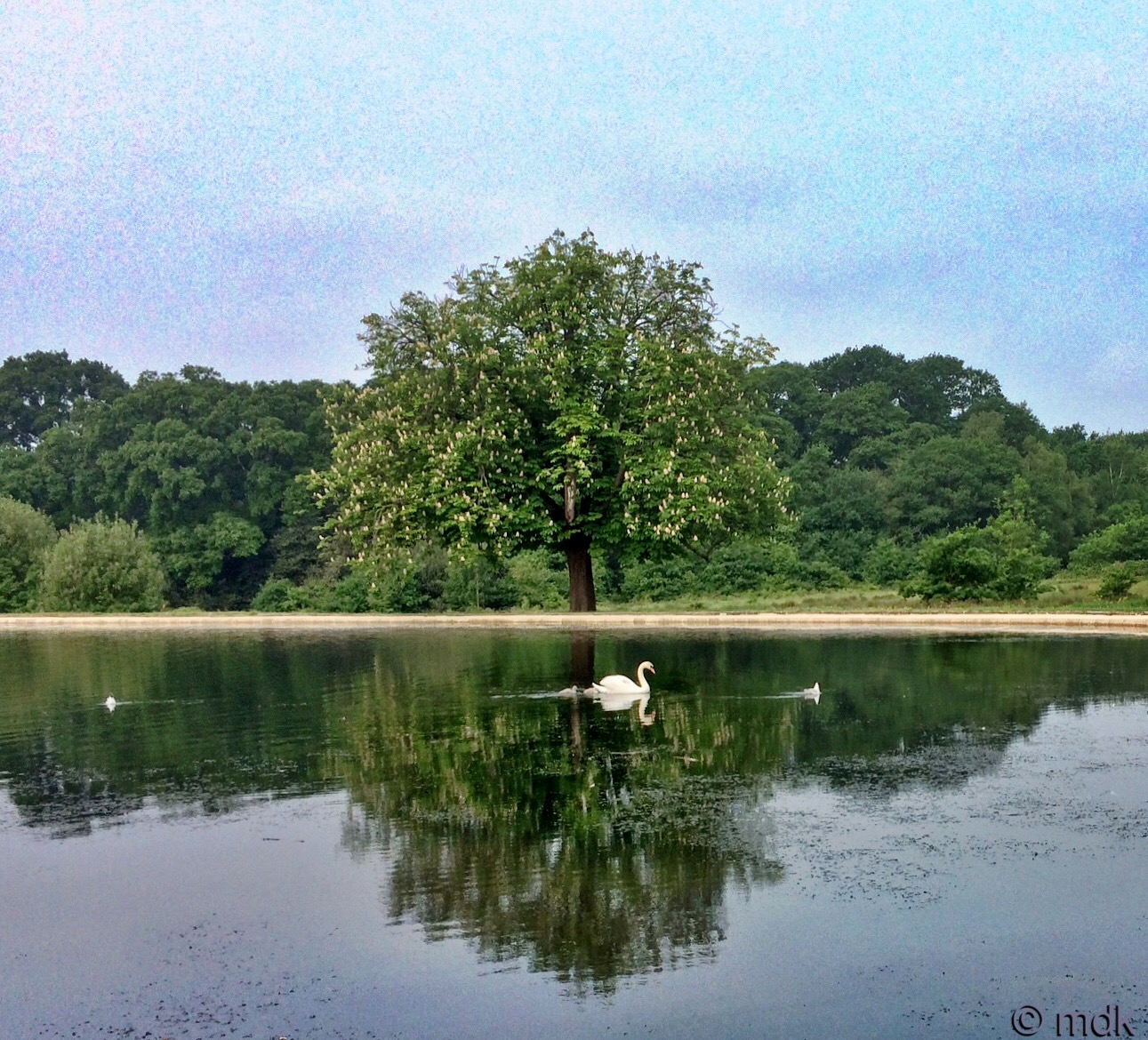 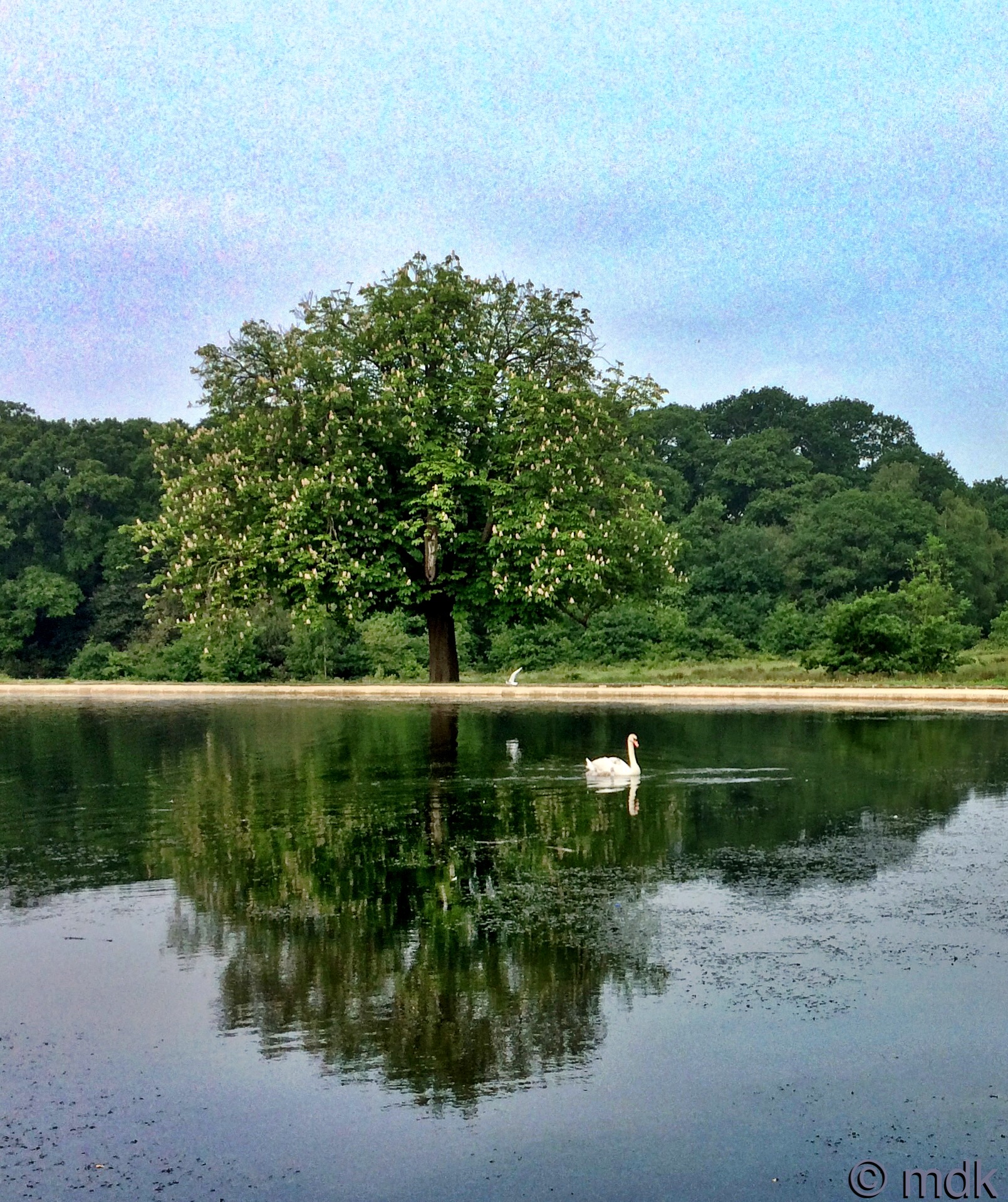 Dragging my heels a little I carried on towards the start line with a few last hopeful shots as I went. With all my riverside wanderings it seems odd that the first mute swan cygnets of the year should be spotted on the Common on a small pond. Goodness only knows where they nested. 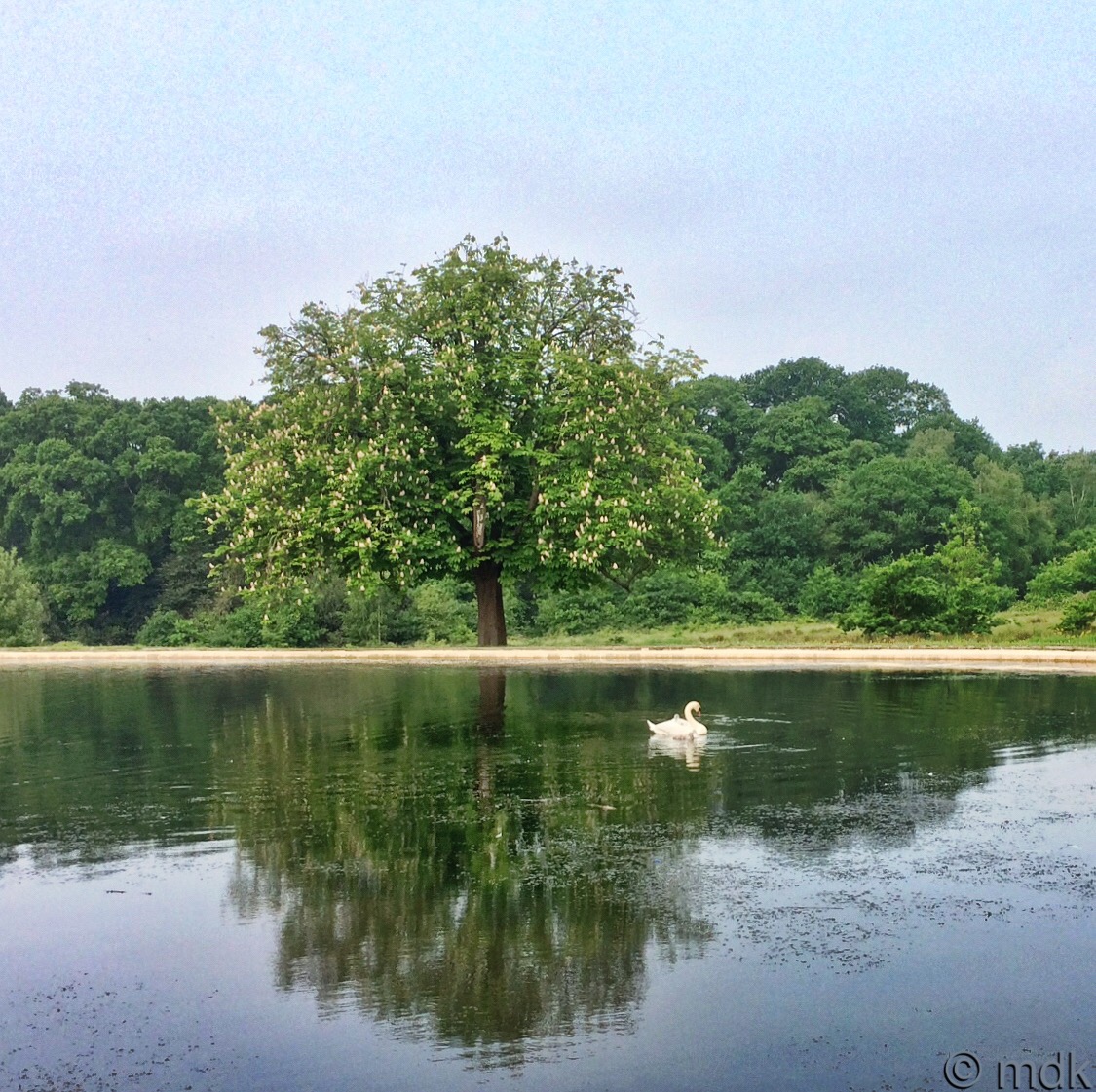 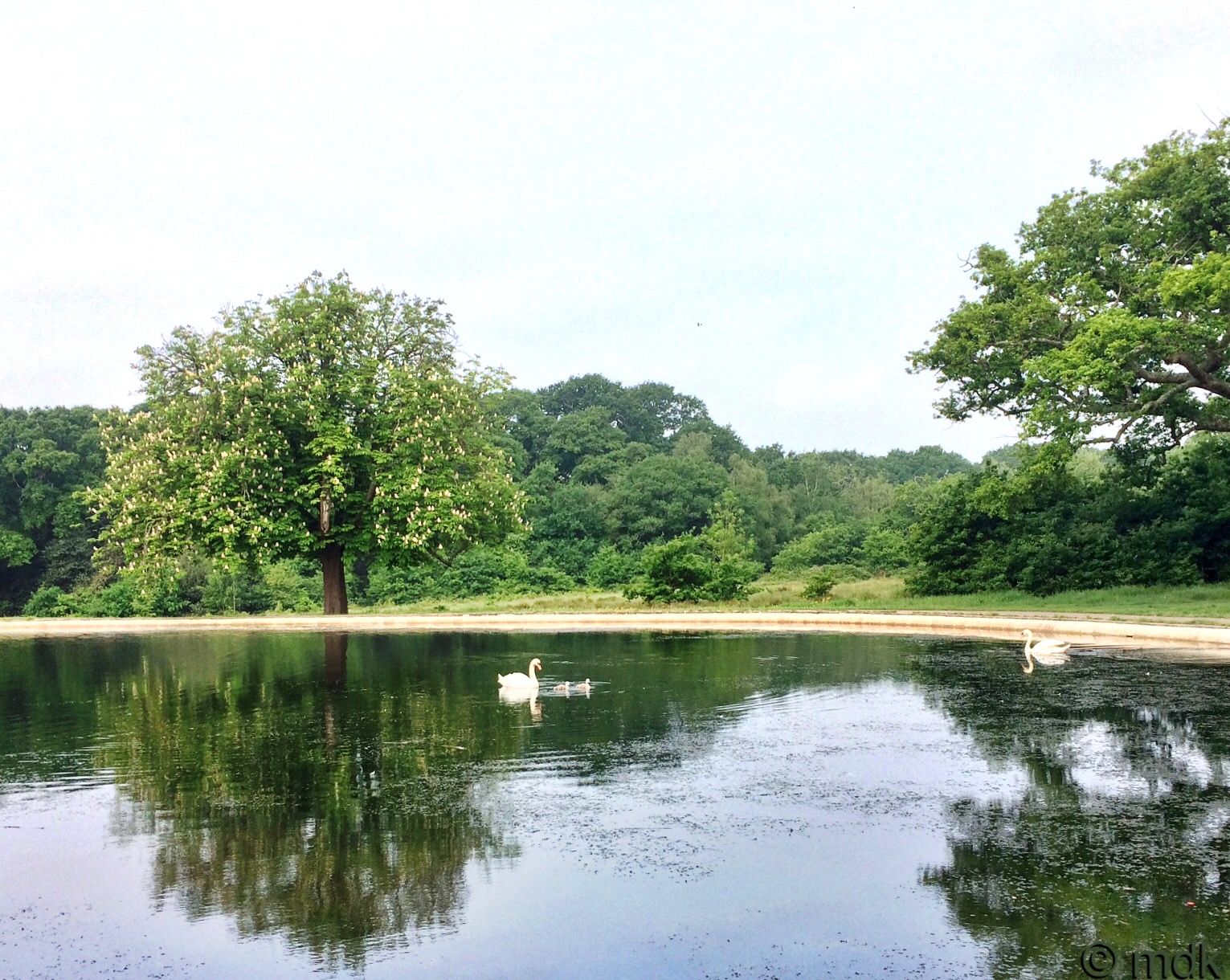 Soon enough we were caught up in all the normal parkrun pre race chat. There was the usual briefing and then Emma and I took our places at the back ready for the start. It didn’t feel as if we were walking all that fast and we chatted as we went. The second loop up the hill was accomplished with a lot of chat about specialised running pushchairs, fat ankles and sleepless nights. Before we knew it we were heading down the hill past the lake. Emma was enchanted when I pointed out the cygnets. Of course there were no photo stops. This is the thing I don’t like about walking the parkrun, all the best photo opportunities happen when I can’t stop.

At the finish line I hung back to let Emma cross the line first. She’s a competitive runner after all and I’m a mere walker who doesn’t much care about times and PB’s if I’m honest. We took our tokens, found a scanner and that was that. Emma looked at her watch and said she thought we’d taken about forty five minutes, not bad but no PB then. Not that I expected one.
“It didn’t seem that long,” Commando said when I told him the time. “Are you sure she clicked her watch at the start and not before?”
“To be honest I didn’t hear the signal to start I just began walking when everyone else started running.”
“Check it on the parkrun website later. I’m sure you were faster than forty five minutes.”

Despite being convinced I hadn’t been walking all that fast I did check the website later that day. Guess what? I finished in 41.46, a new PB for me and, as Emma crossed the line before me, a new walking PB for her. Ok, I don’t really care about times and PB’s but it’s nice to get one all the same. Best of all I wasn’t last by a long way! 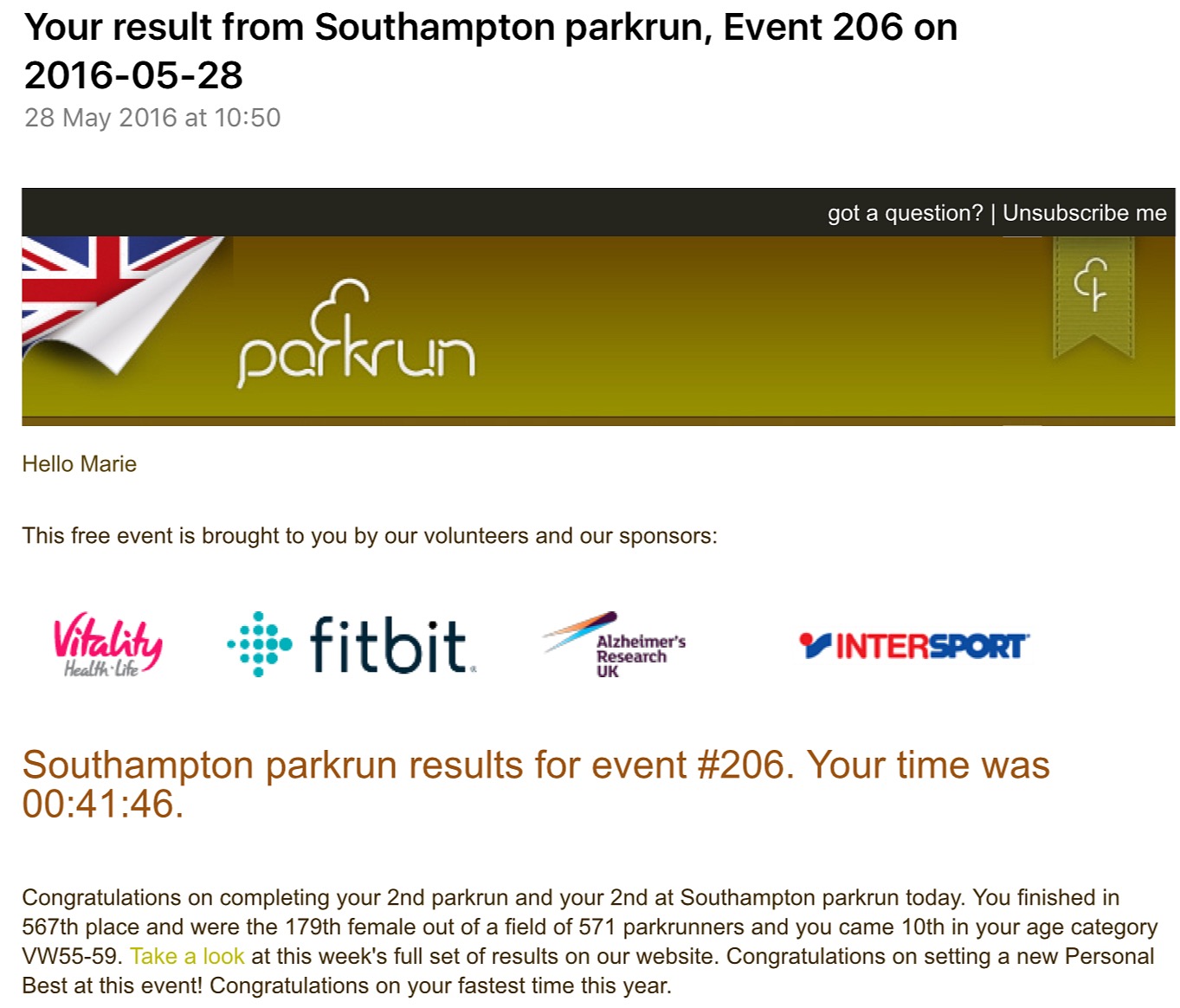 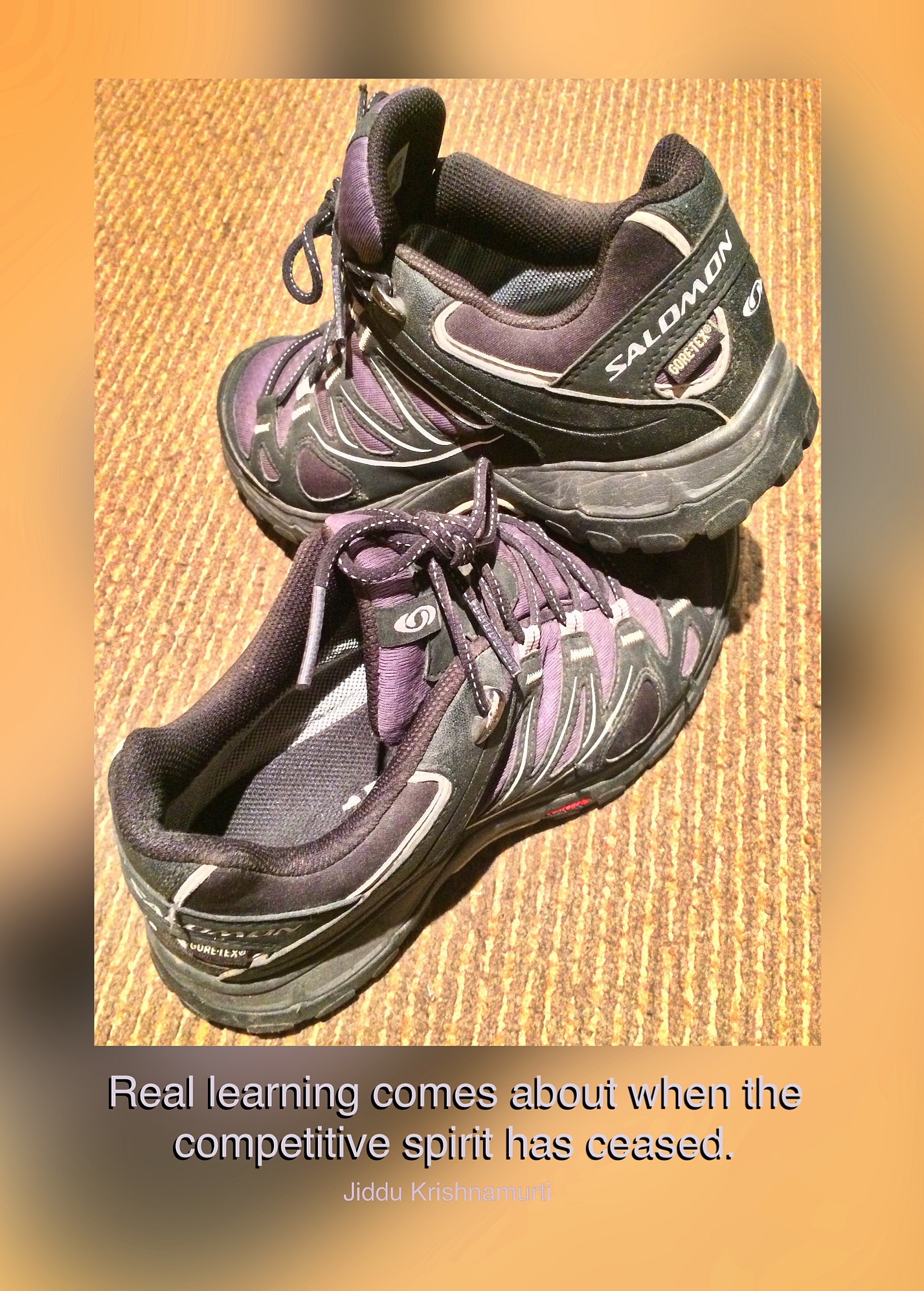