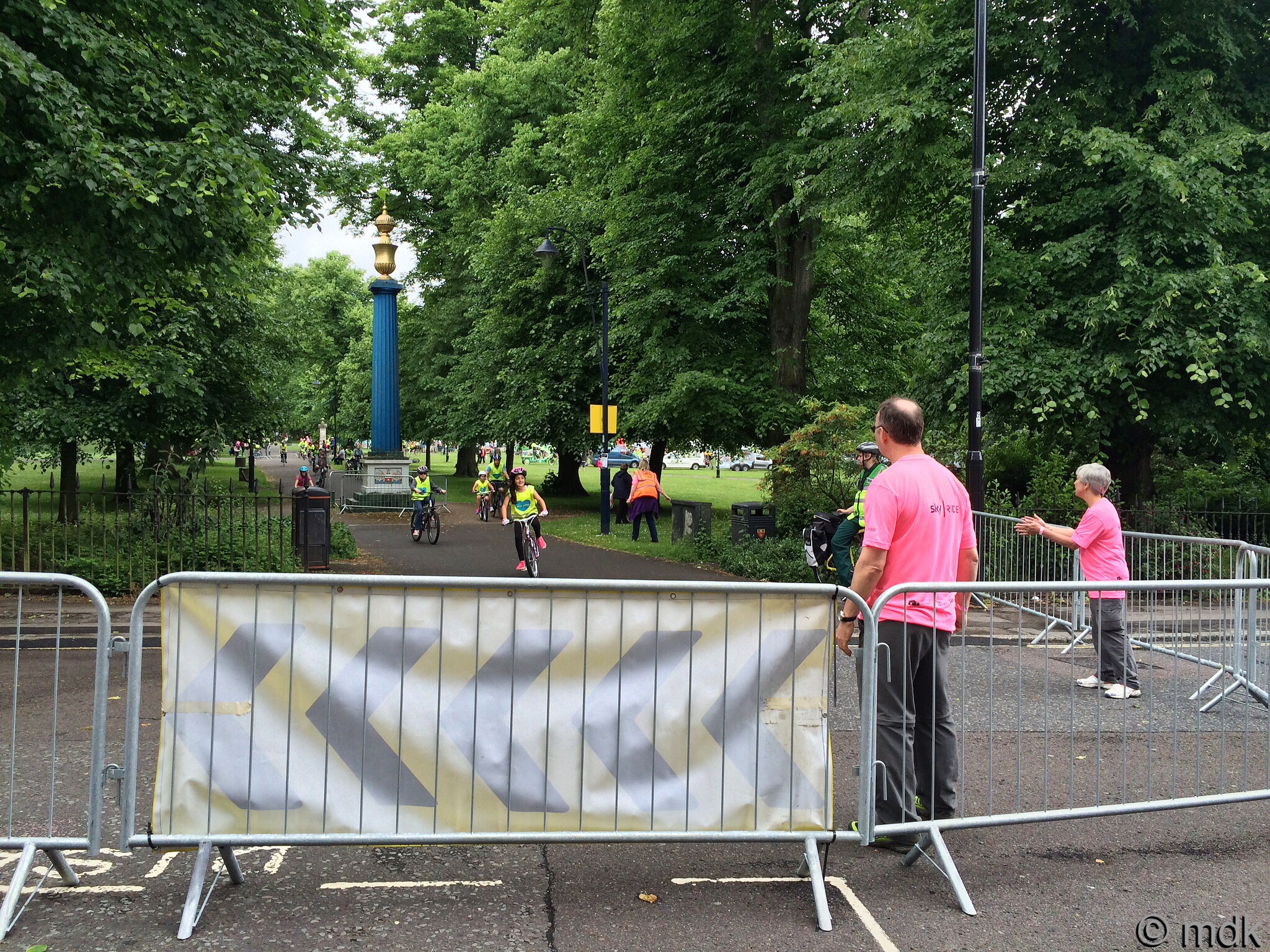 John, the parkrun ED, volunteered to organise marshals for this year’s Southampton Skyride so, today, there were an unusually large number of runners lining the streets of Southampton. They were all dressed in eye popping pink t-shirts. Amongst them was Commando. He left rather early this morning while I was still drinking hot chocolate and rubbing the sleep from my eyes. At a more reasonable hour CJ and I walked over to town to see what all the fuss was about.

Our first sight of bikes came as we strolled up Hanover Buildings towards the precinct. It was also our first sight of the pink t-shirts in the wild. Of course, I’d seen Commando in his before he left home but somehow, out in the open, they seemed brighter. A few yards further and we came upon some dubious looking chaps with stop go boards directing traffic on the corner by the Bargate. Commando had obviously been chosen for this prime position for comedy effect. There was certainly a lot of banter going on. 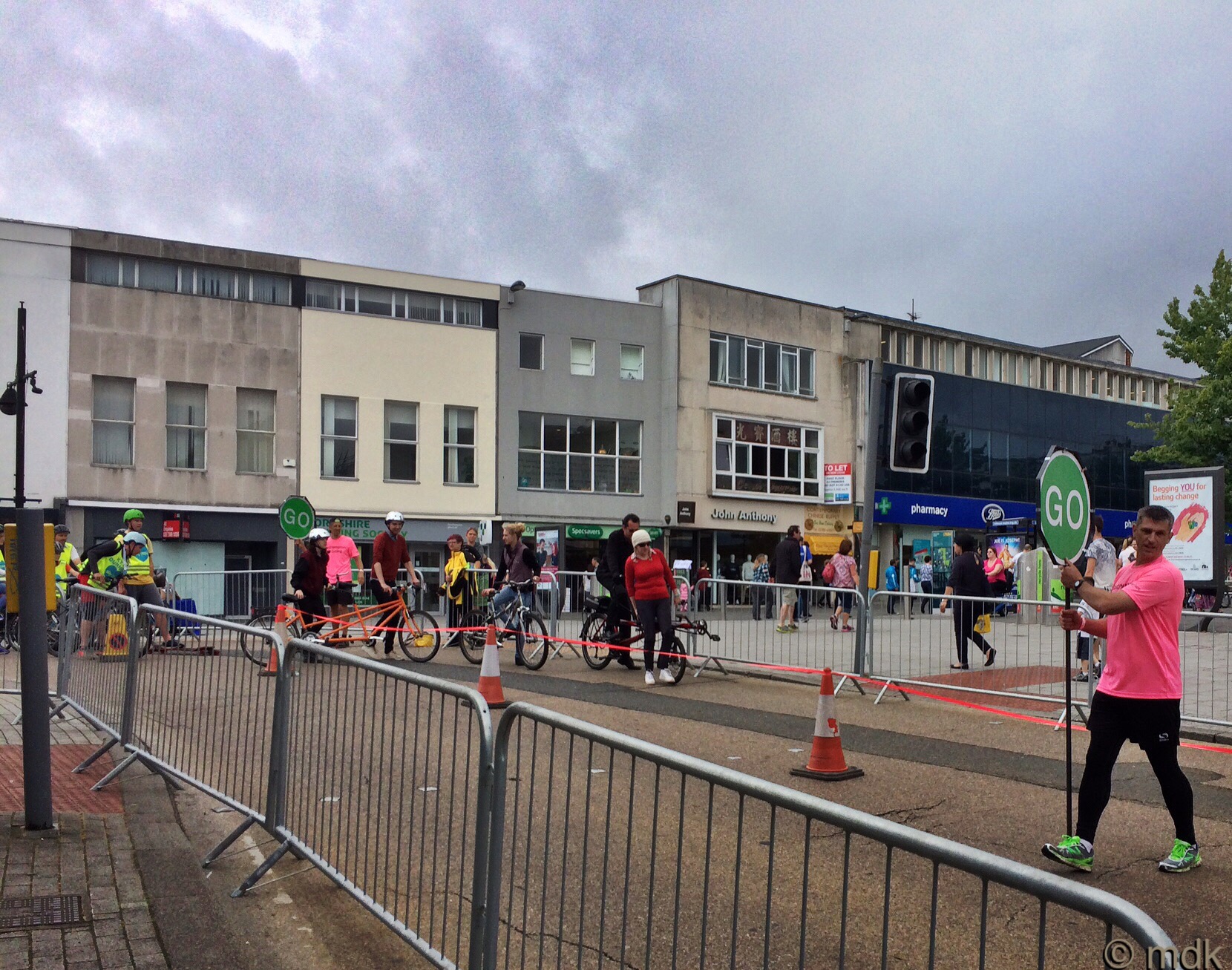 What they were actually doing was stopping the bikes every so often and opening the barriers so pedestrians could cross the road rather than walk the twenty or so yards around the outside of the Bargate. This was not the original plan but, when the barriers went up, the coffee shop owner was so incandescent with rage he called the council and demanded something be done because he was going to lose business. This was after he’d yelled at poor Commando a bit. That’s one coffee shop I’m crossing off my list then.

We waited until the next opening of the barrier and went across the road to say hello to Commando. He seemed to be enjoying himself, despite a fair bit of abuse, particularly from the pedestrians, one of whom had already threatened him and told him “you’re on my list mate!” Seriously, the way some people react anyone would think the whole of town was a no go area rather than one little bit of road that can easily be avoided with a two minute walk. 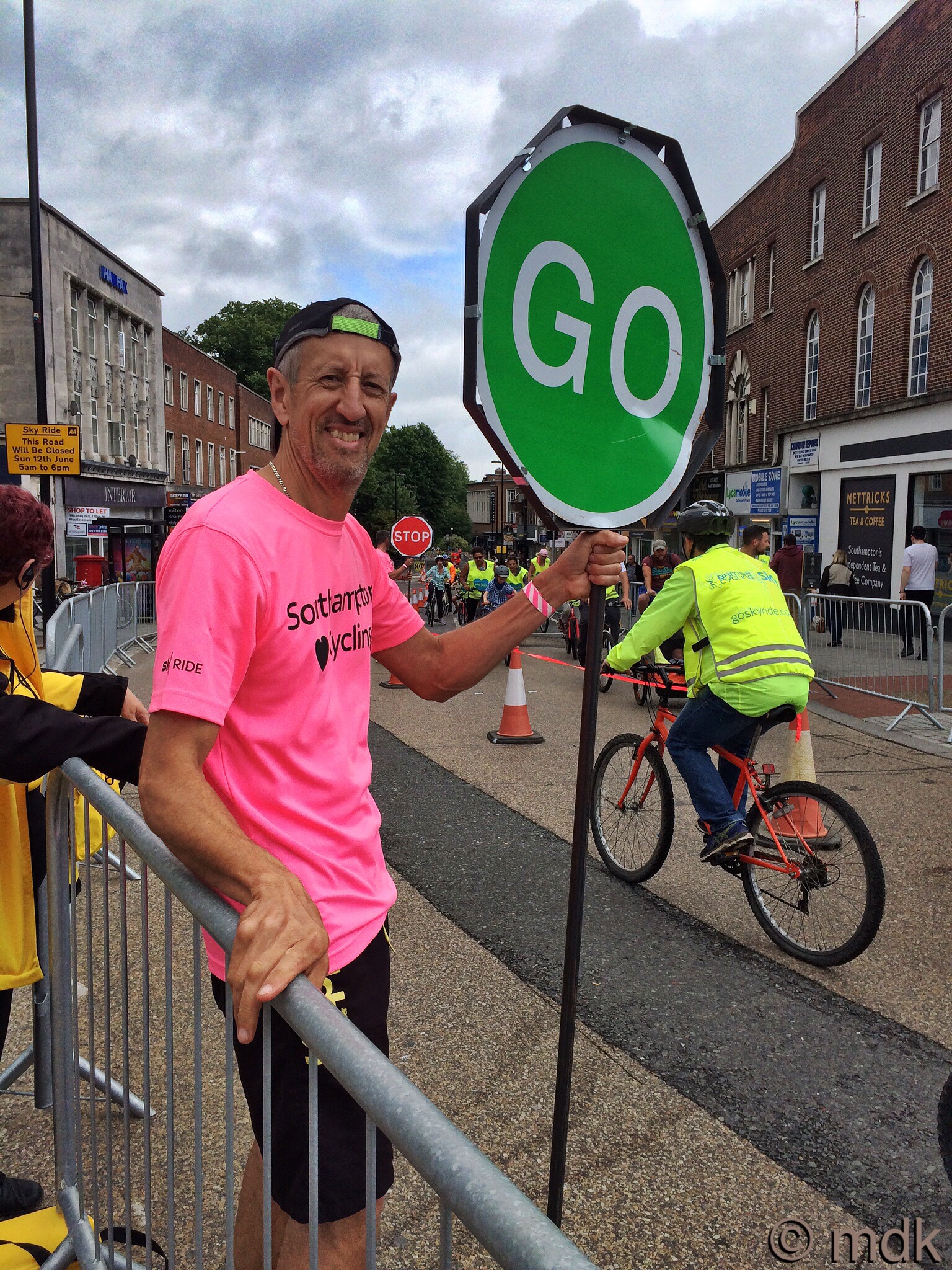 After that we crossed back at the next barrier opening to take care of important business, namely coffee. We had walked a good three miles at this point so we felt we deserved one. We strolled past the Bargate while cyclists of every kind streamed past on all sides. There was even one dressed in a red Angry Bird suit with a monkey on the crossbar. What on earth that was all about was anyone’s guess but I should think they were hot. The early morning rain and the overcast skies made it muggy even in a t-shirt and jeans. 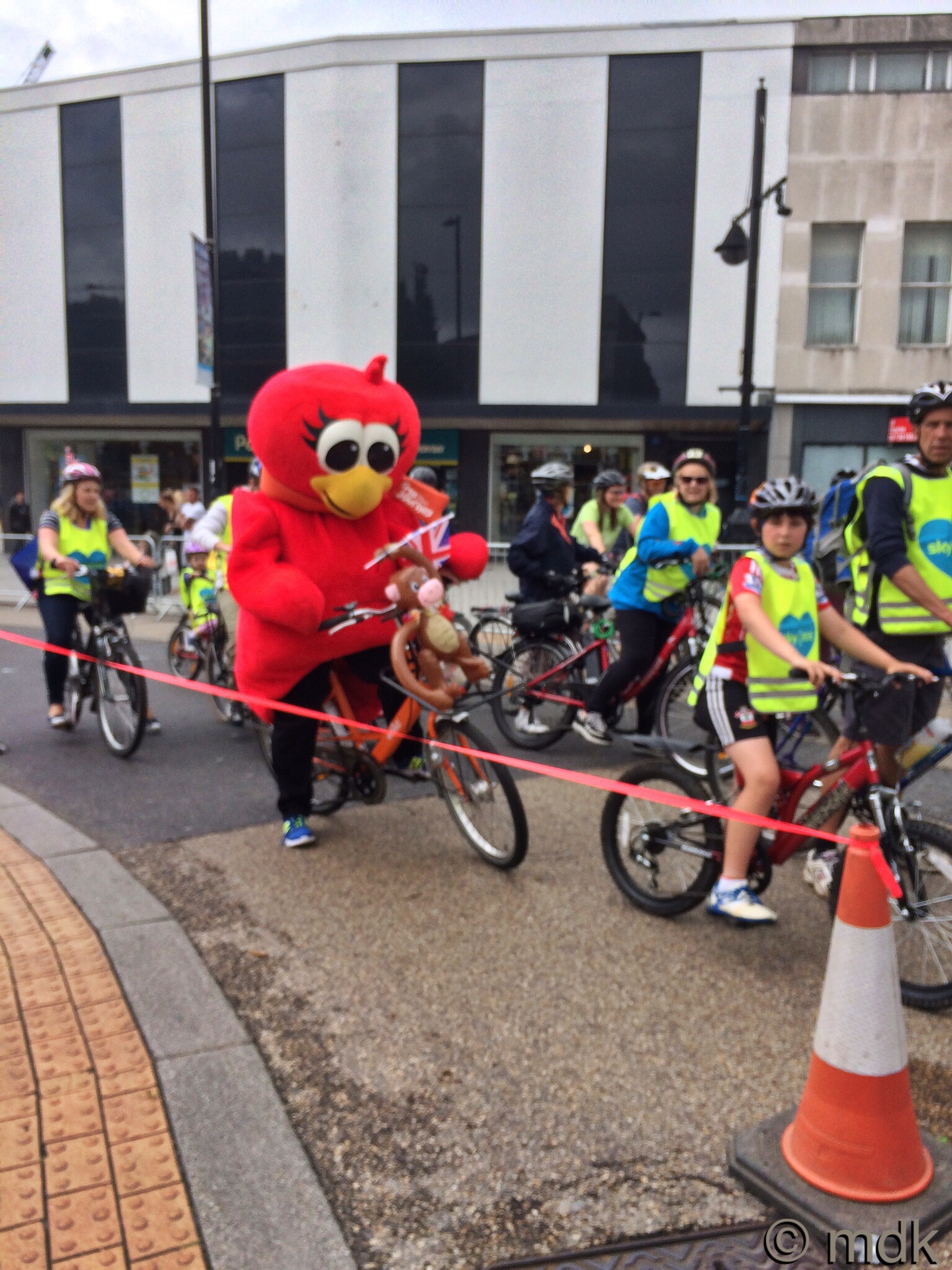 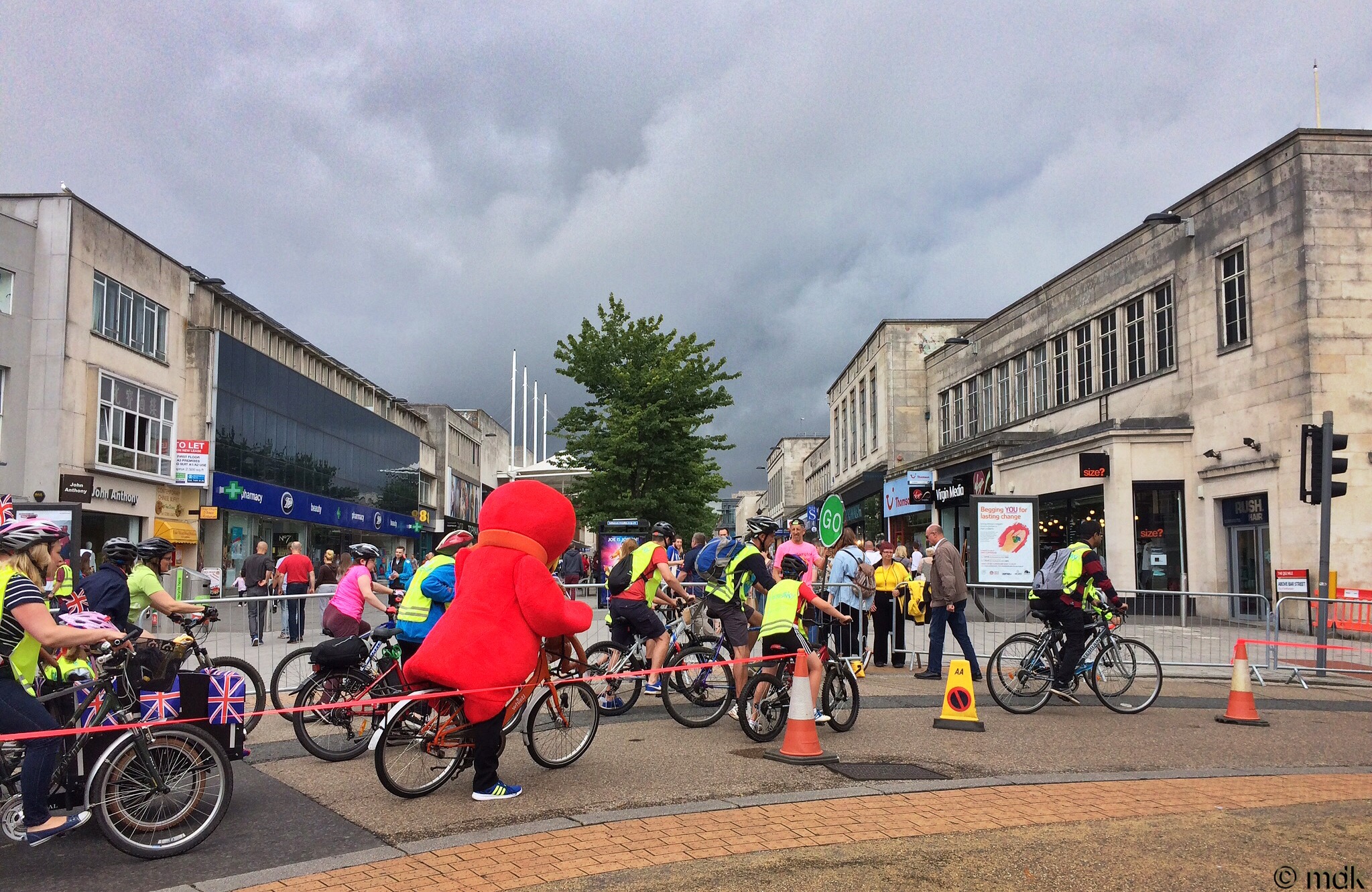 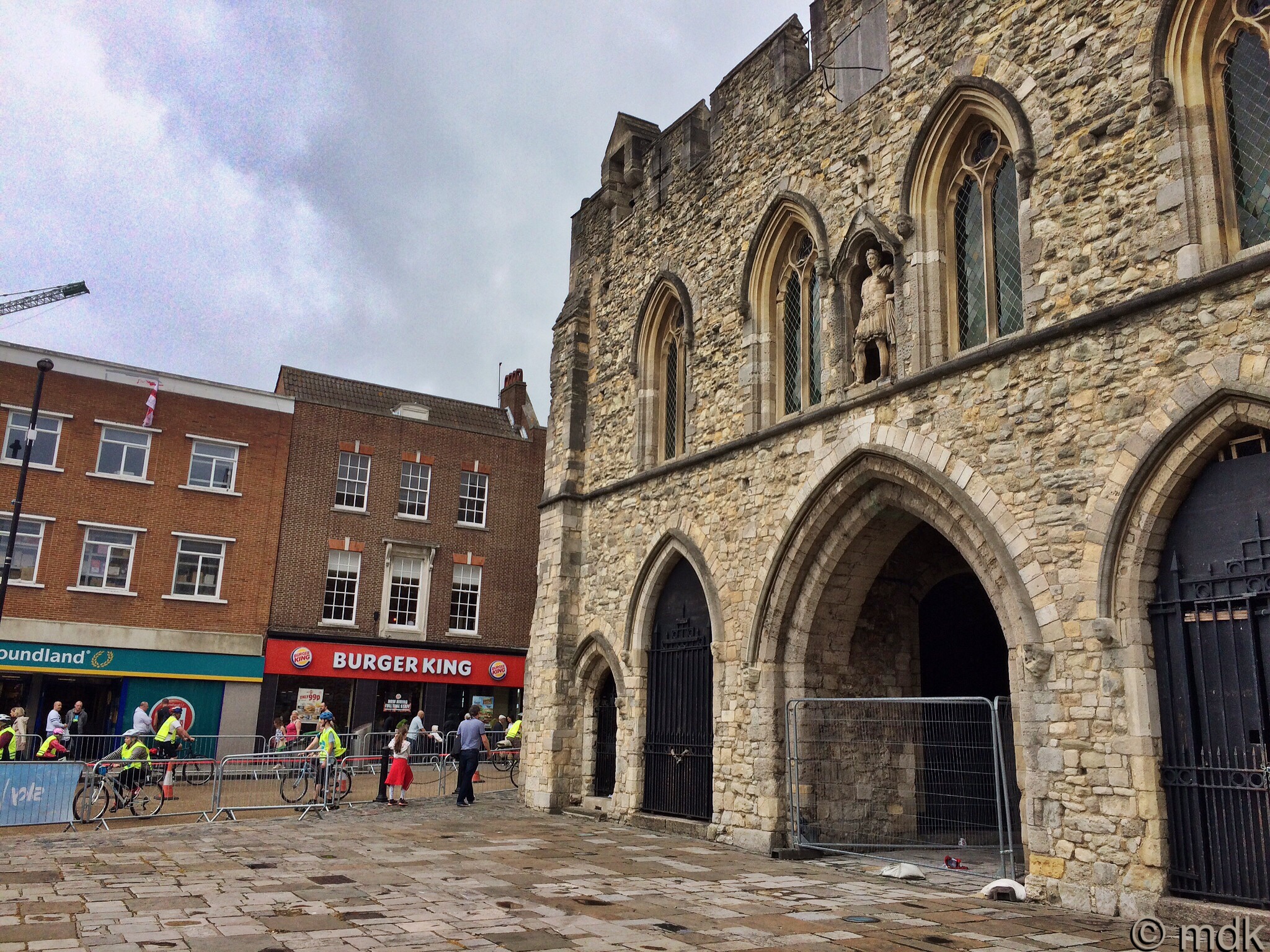 In Costas we discussed the weather over coffee and cakes. We both felt sure there’d be a storm before the day was out and I was glad of the thin mac in my rucksack. Last year there was glorious sunshine on Skyride Sunday, this year the only sun was on the top of my cake. We also worked out a plan of action to give us maximum bike spotting opportunities and take us to see something else we were both interested in. 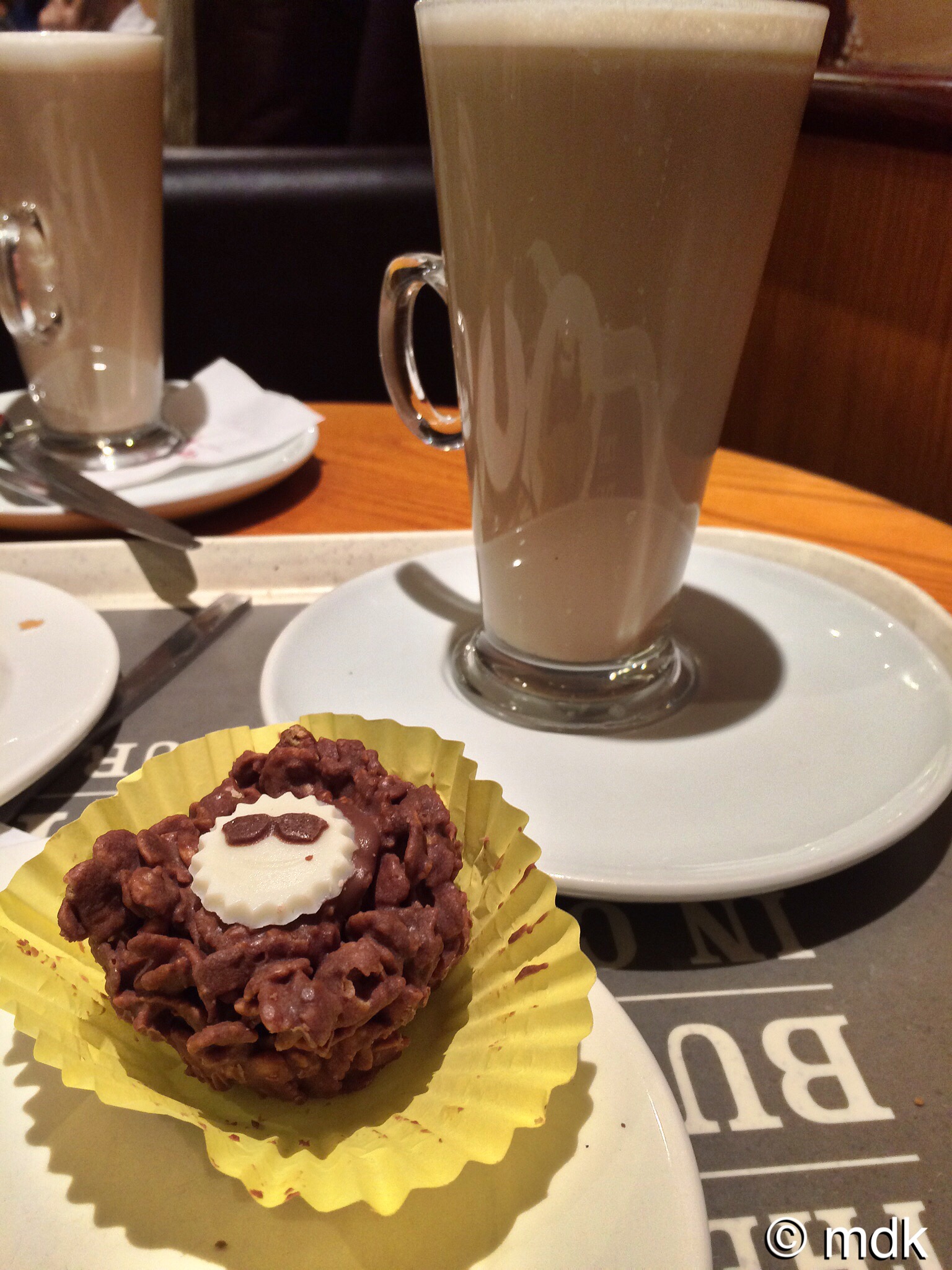 We took the long way back to Commando’s marshalling post. This involved crossing the road opposite Costa and walking around the Bargate so it was hardly any longer at all. On the way we spotted another pair of Skyride marshals. We also had a good view of the work going on on the stones of the ancient building. There is still blue netting behind the scaffolding but, squinting, we could see the stones behind it. They looked very clean with fresh mortar. Hopefully it’s the right kind this time. 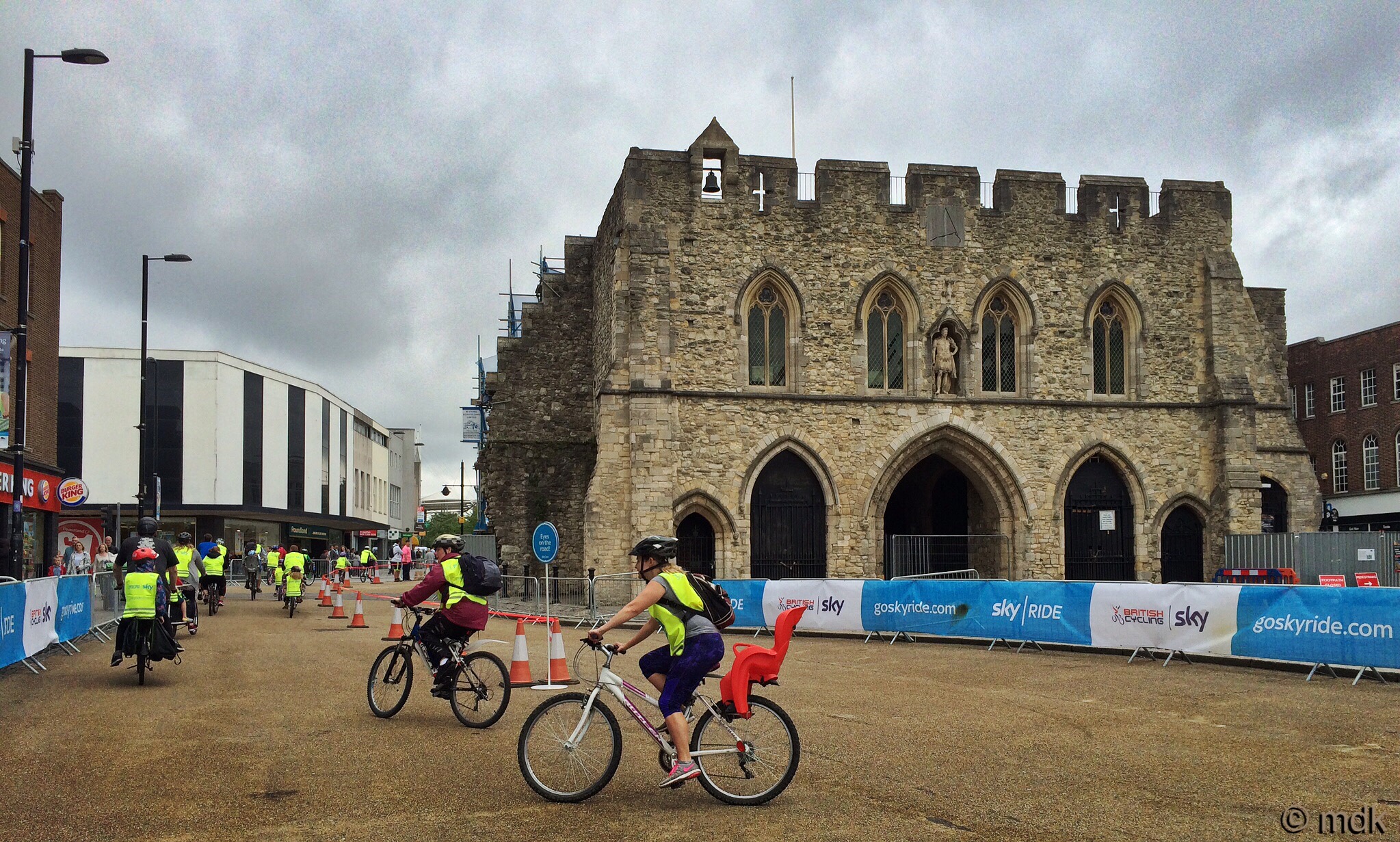 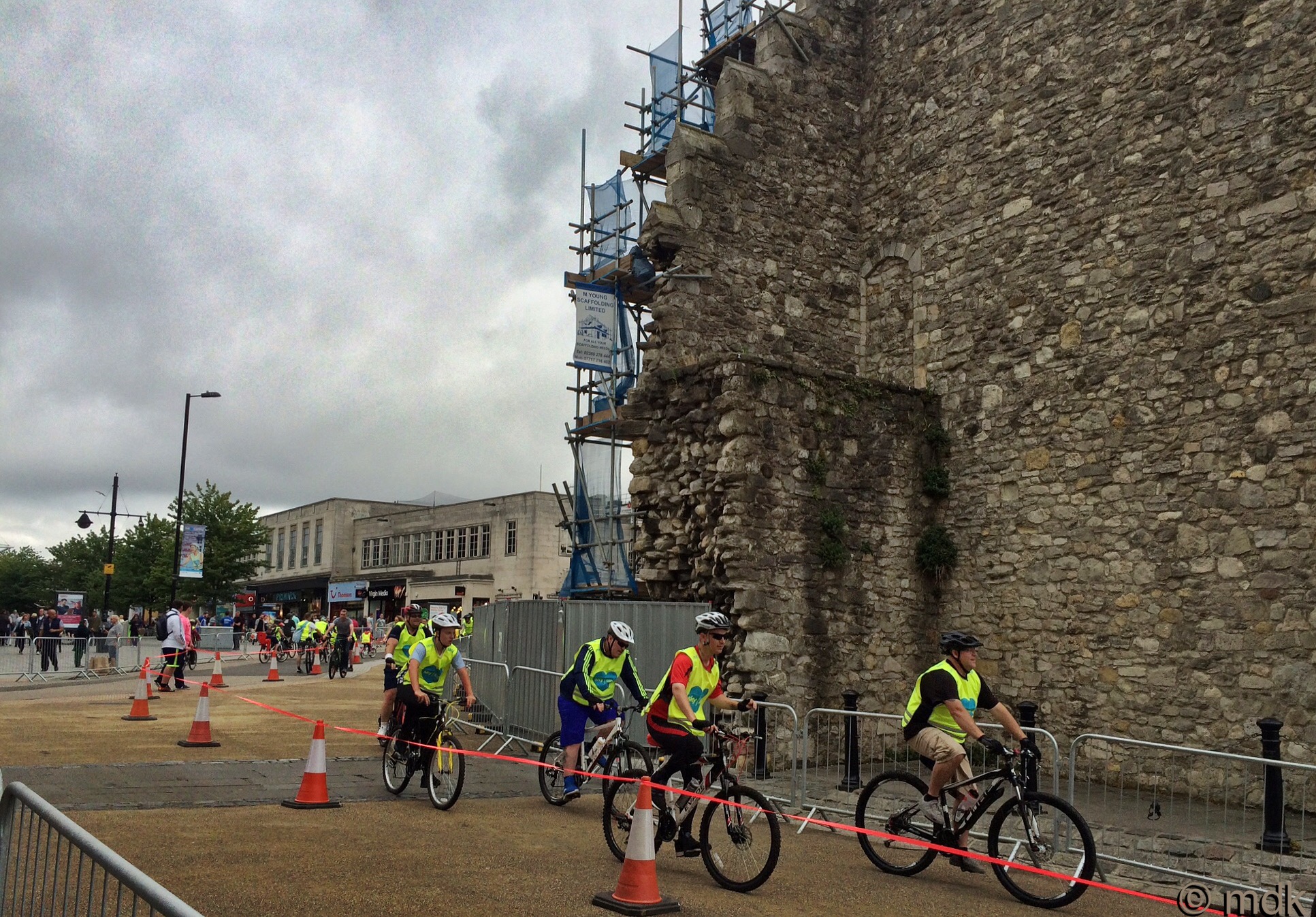 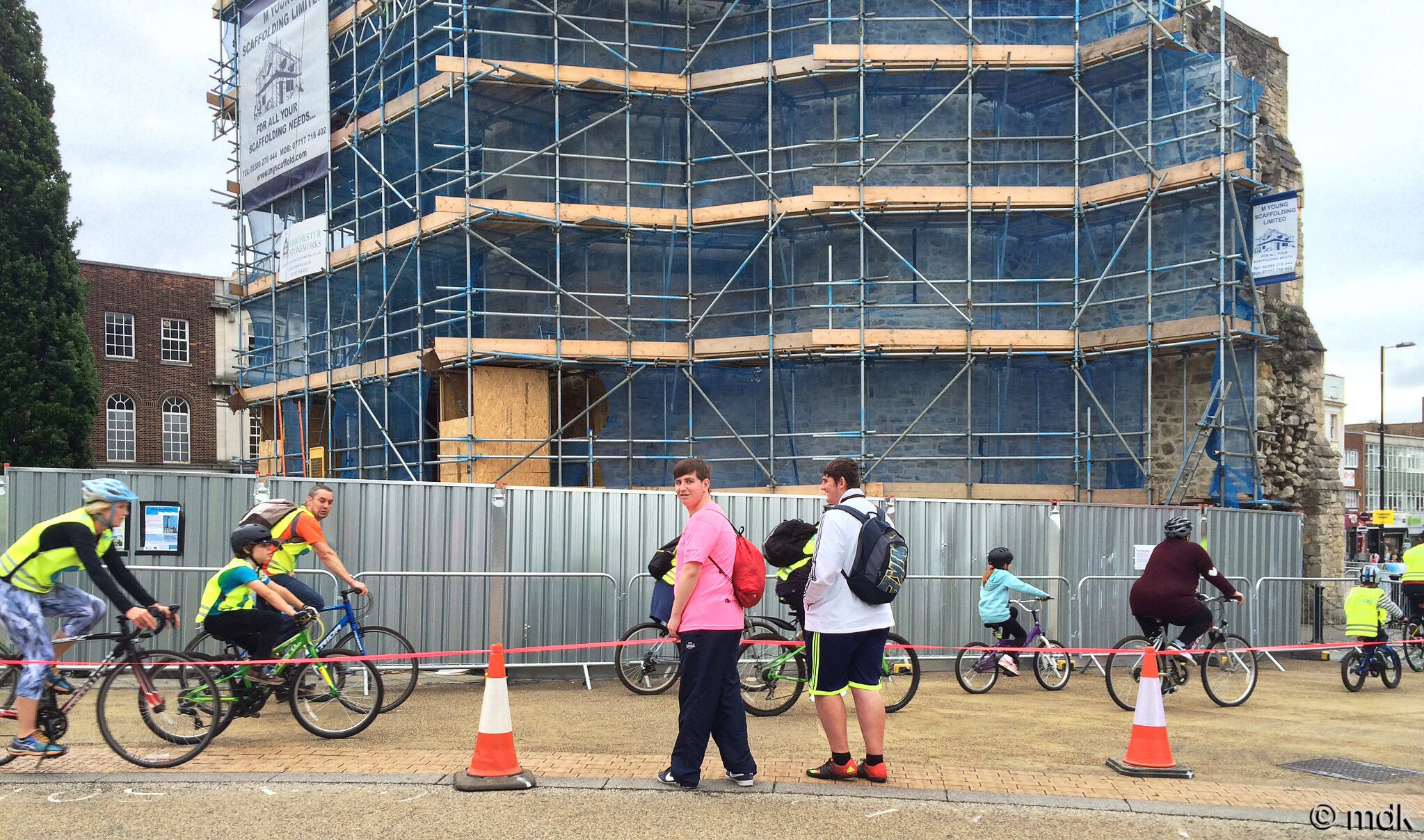 We stopped off to make sure the stop go men didn’t need any food or drinks and then headed off through the quiet precinct. We caught up with the Skyride again at Guildhall Square. It was filled to the brim with bikes, people in deckchairs and a huge pop up gazebo. Somehow we managed to get through it all without getting knocked down by a stray bike. 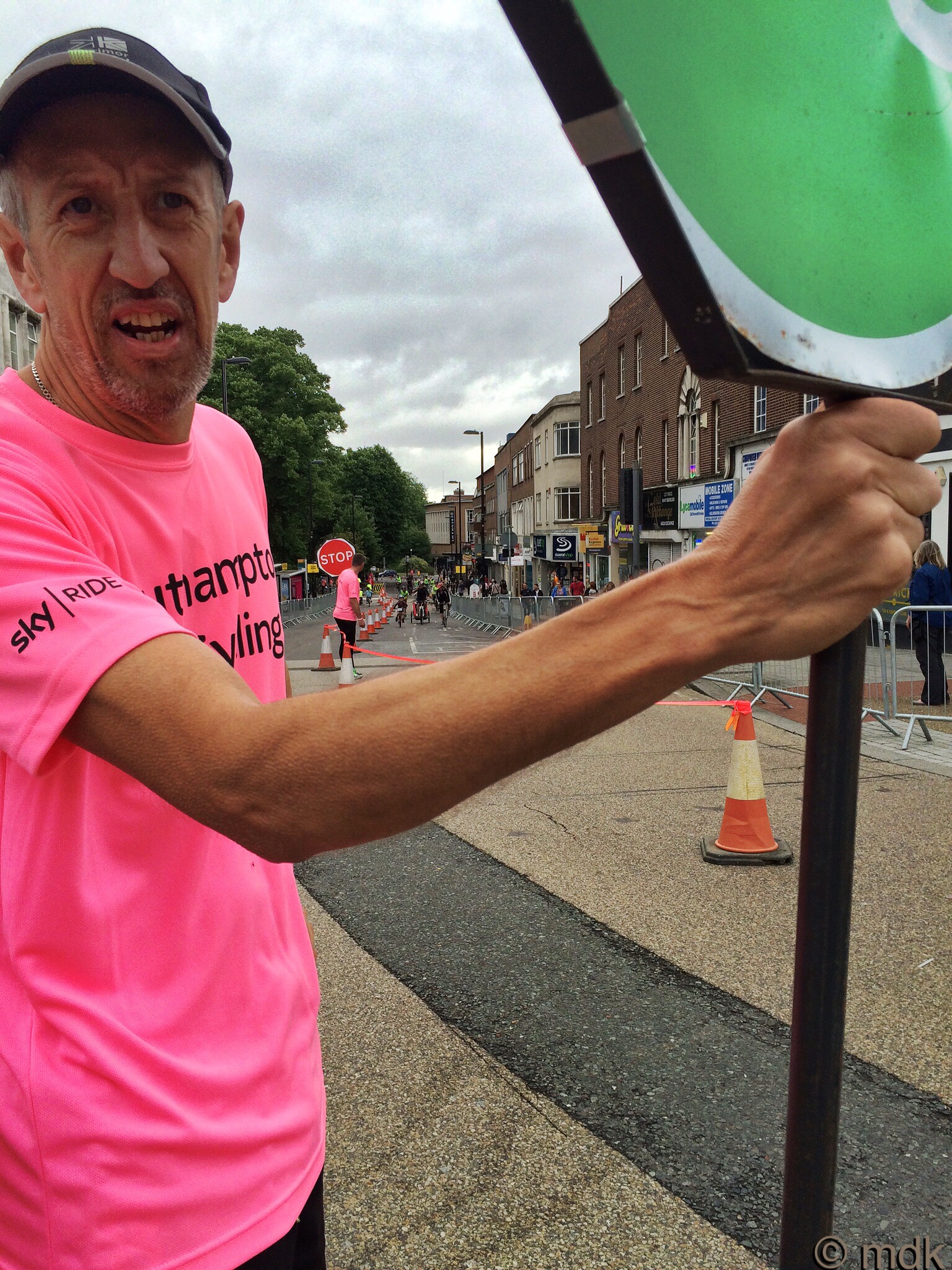 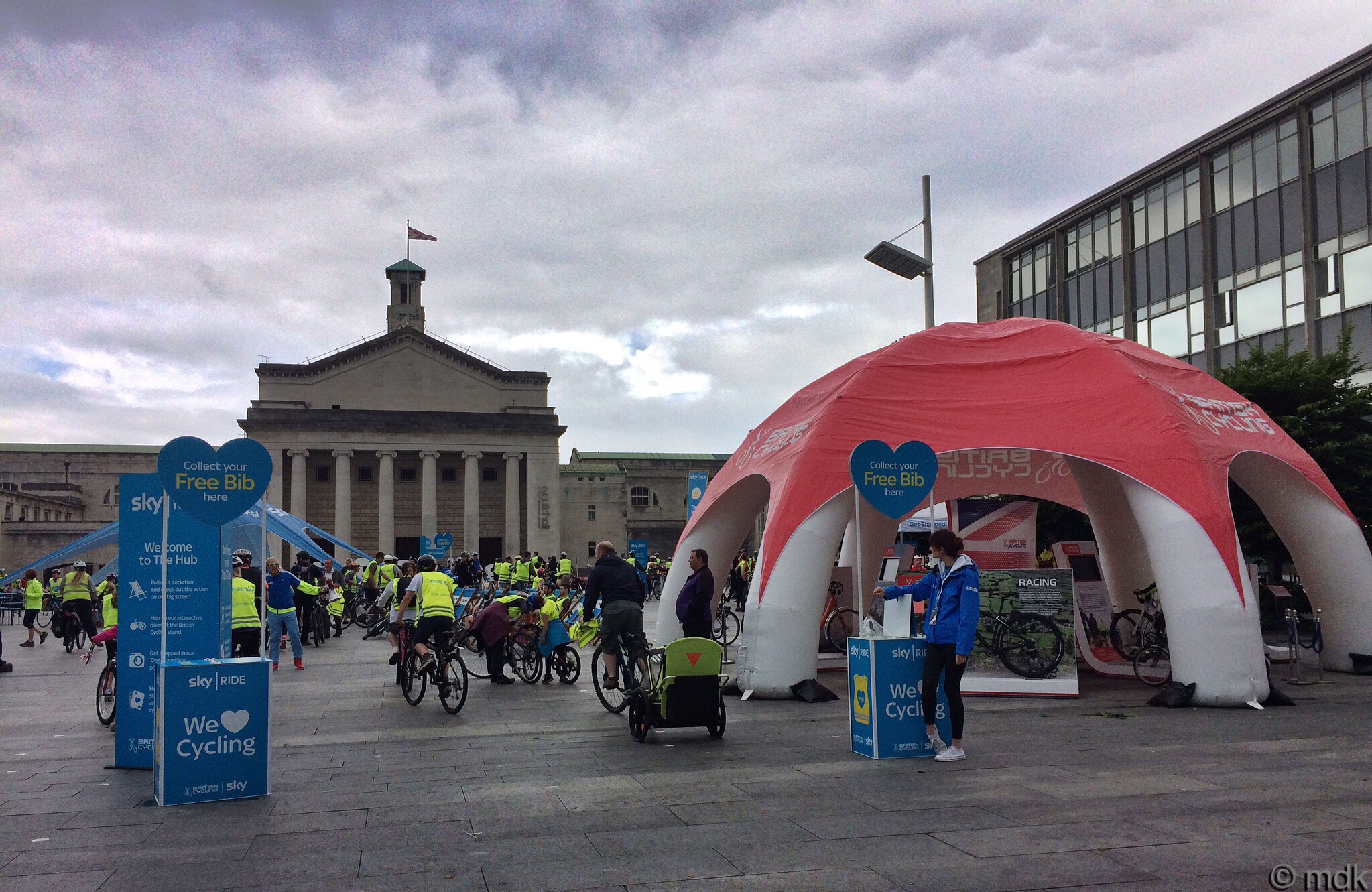 Now we were heading for The cenotaph. The Skyride course looped up through West Park. Across the road the entrance to East Park looked pretty congested but the marshals seemed to be coping admirably. 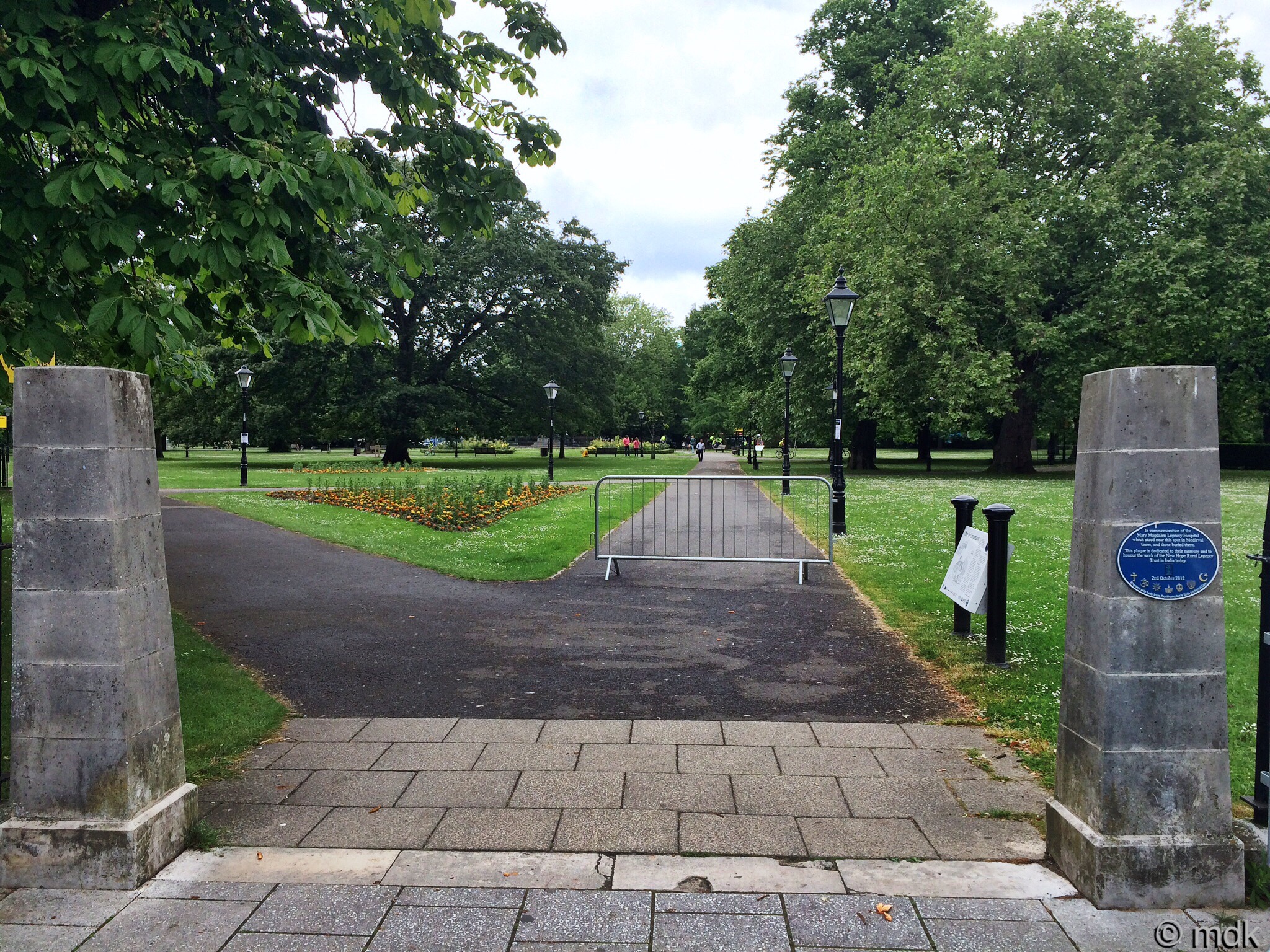 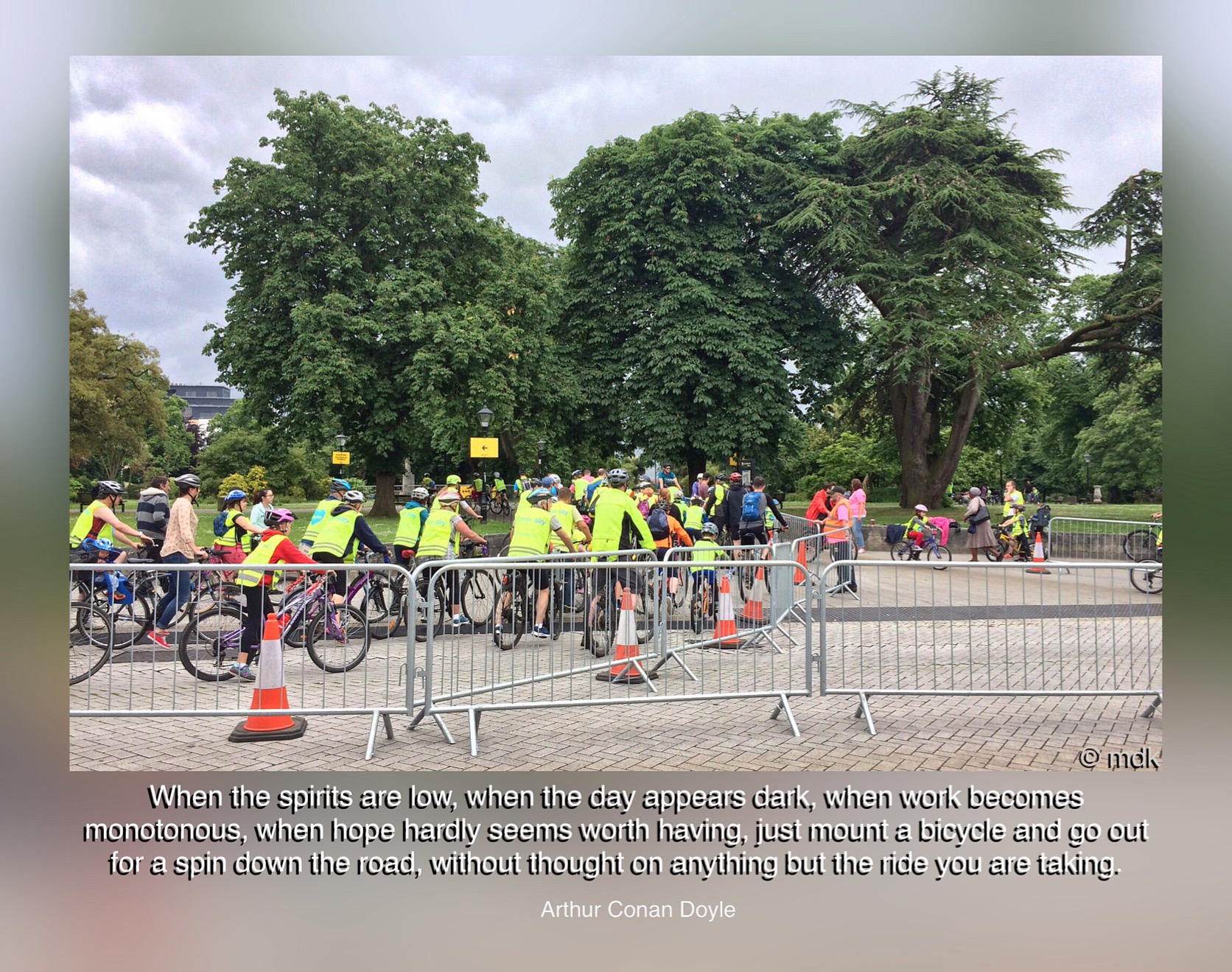 Now we were actually walking alongside the riders towards London Road. Just before we reached the crossroads a few spots of rain began to fall and I wondered if walking away from the city centre was such a good idea. At least there, if the heavens opened, we’d have had shops and cafes to shelter in. We pressed on though, hoping it wouldn’t come to anything. 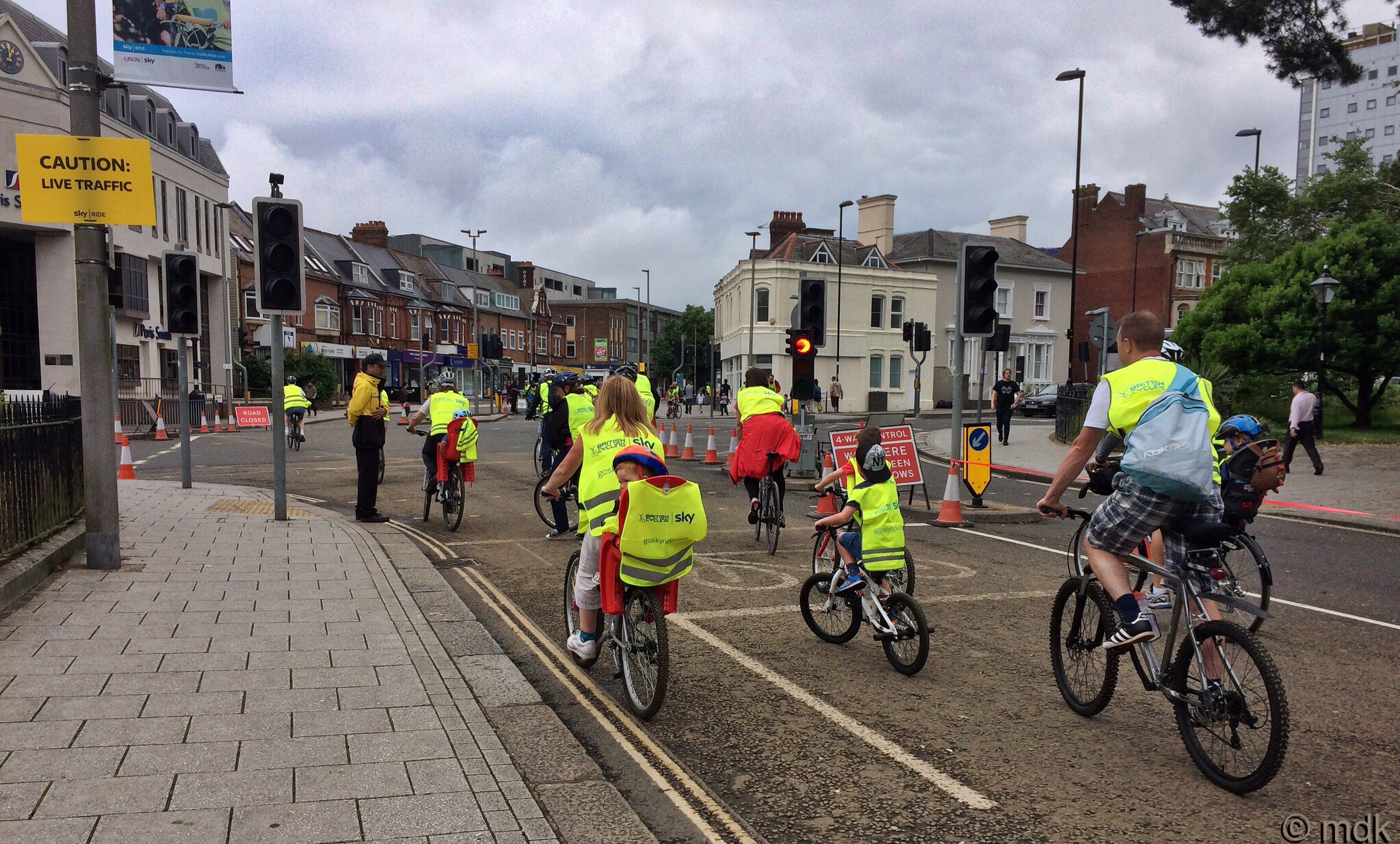 By the time we got to the beginning of The Avenue the brief shower had stopped, more or less. It had hardly been enough to wet the pavements but the clouds told of more to come. A group of marshals passed us on bikes.
“I wonder if Dad will get a chance to ride round the course?” CJ asked.
“Dad said he was going to try. You never know he might come past us at some point.” 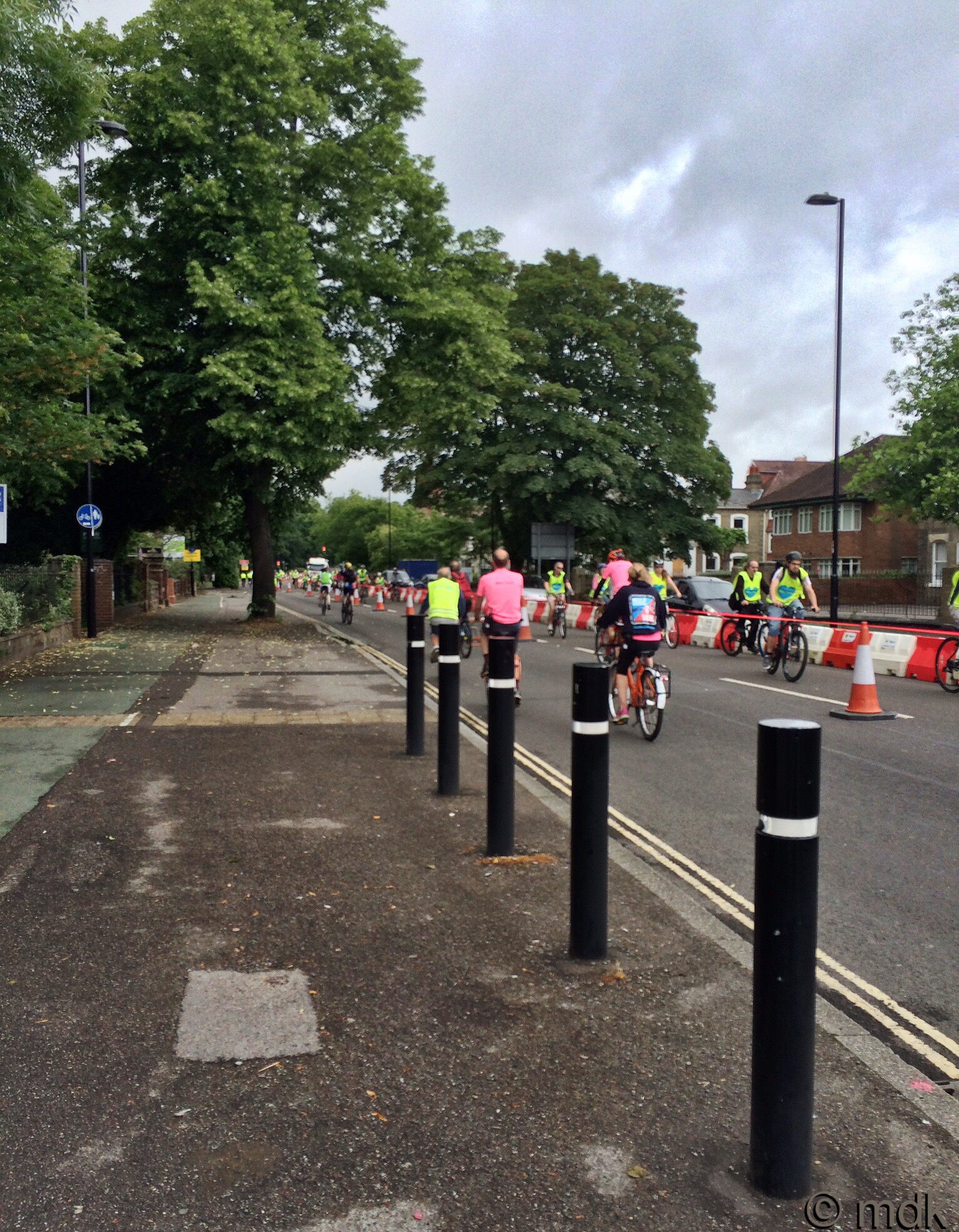 Soon we’d reached the Common. We followed the bikes down Cemetery Road and discovered the Sprint Zone. Here riders could zoom through a timed section and see their time displayed on a board. Somehow I thought this would appeal to Commando. Since he started running he’s become ever so slightly obsessed with speed. 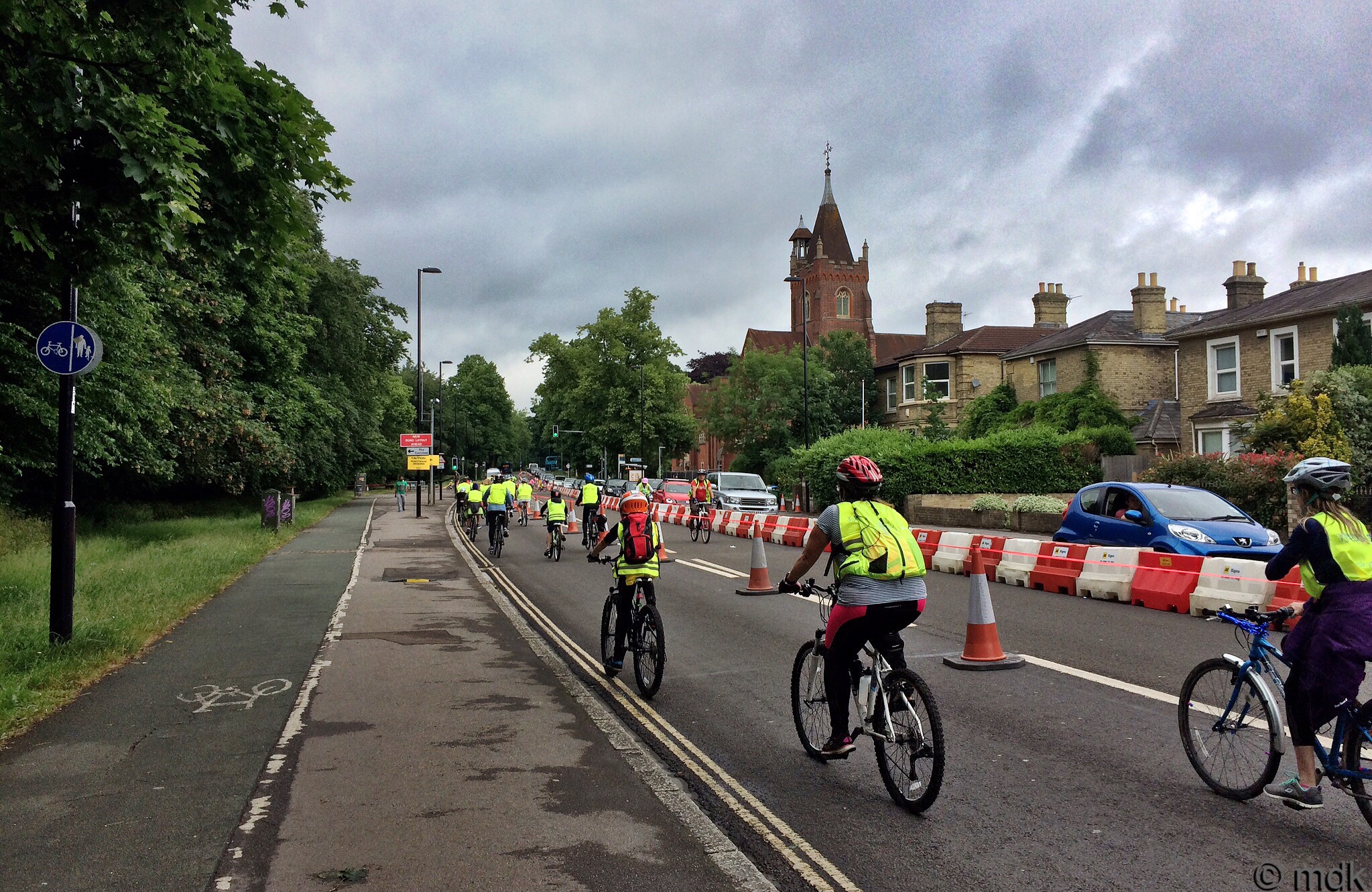 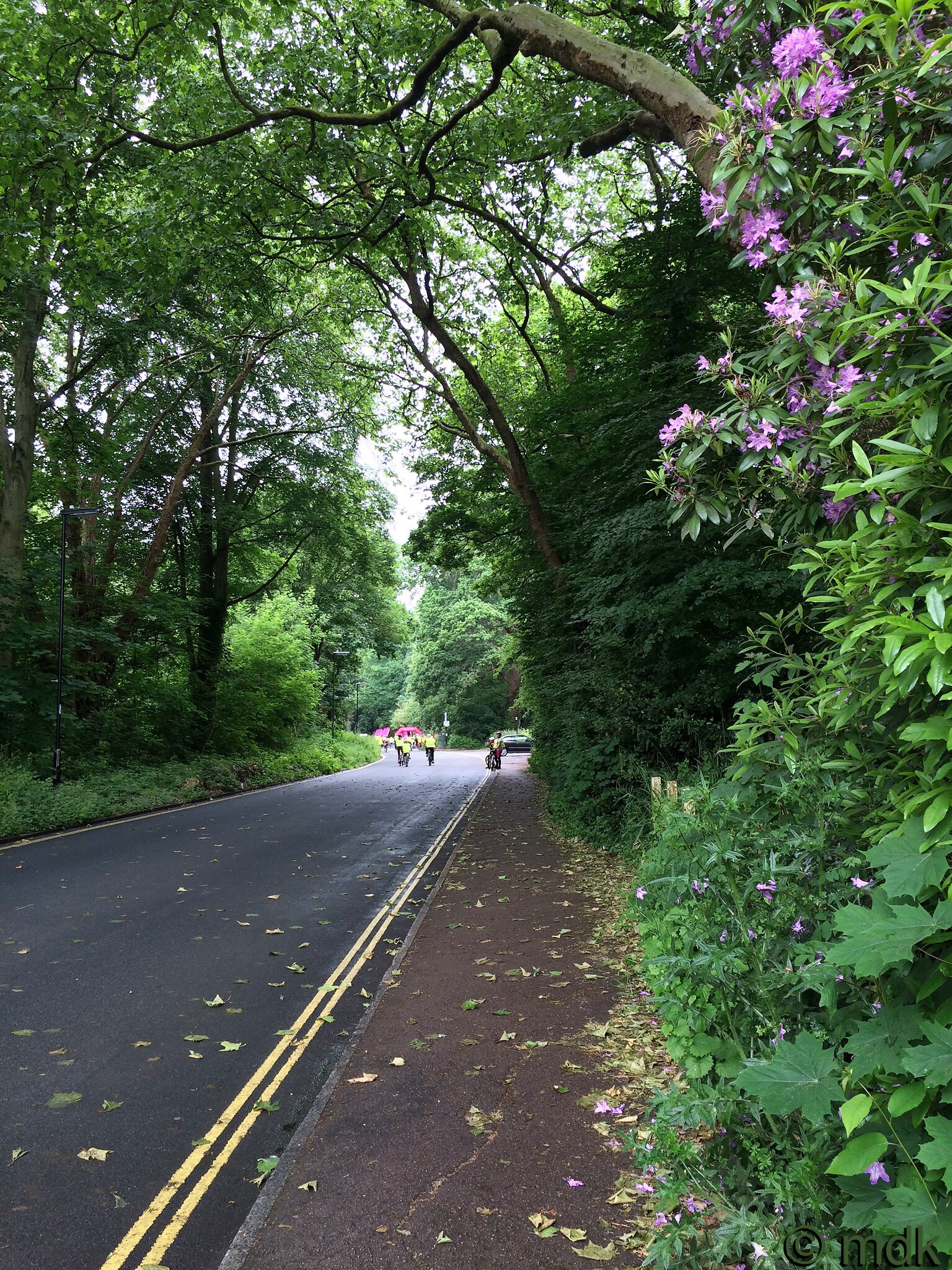 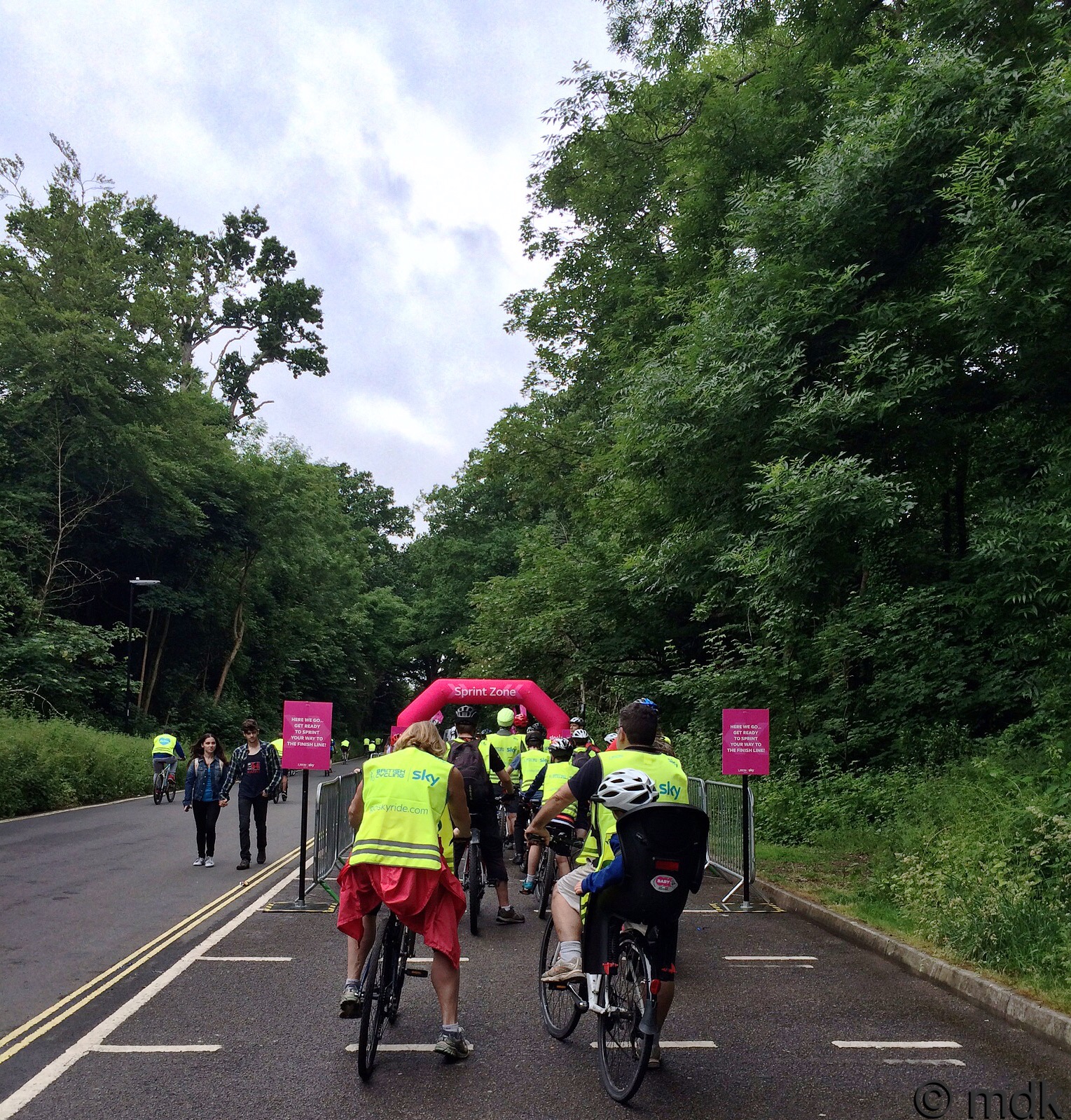 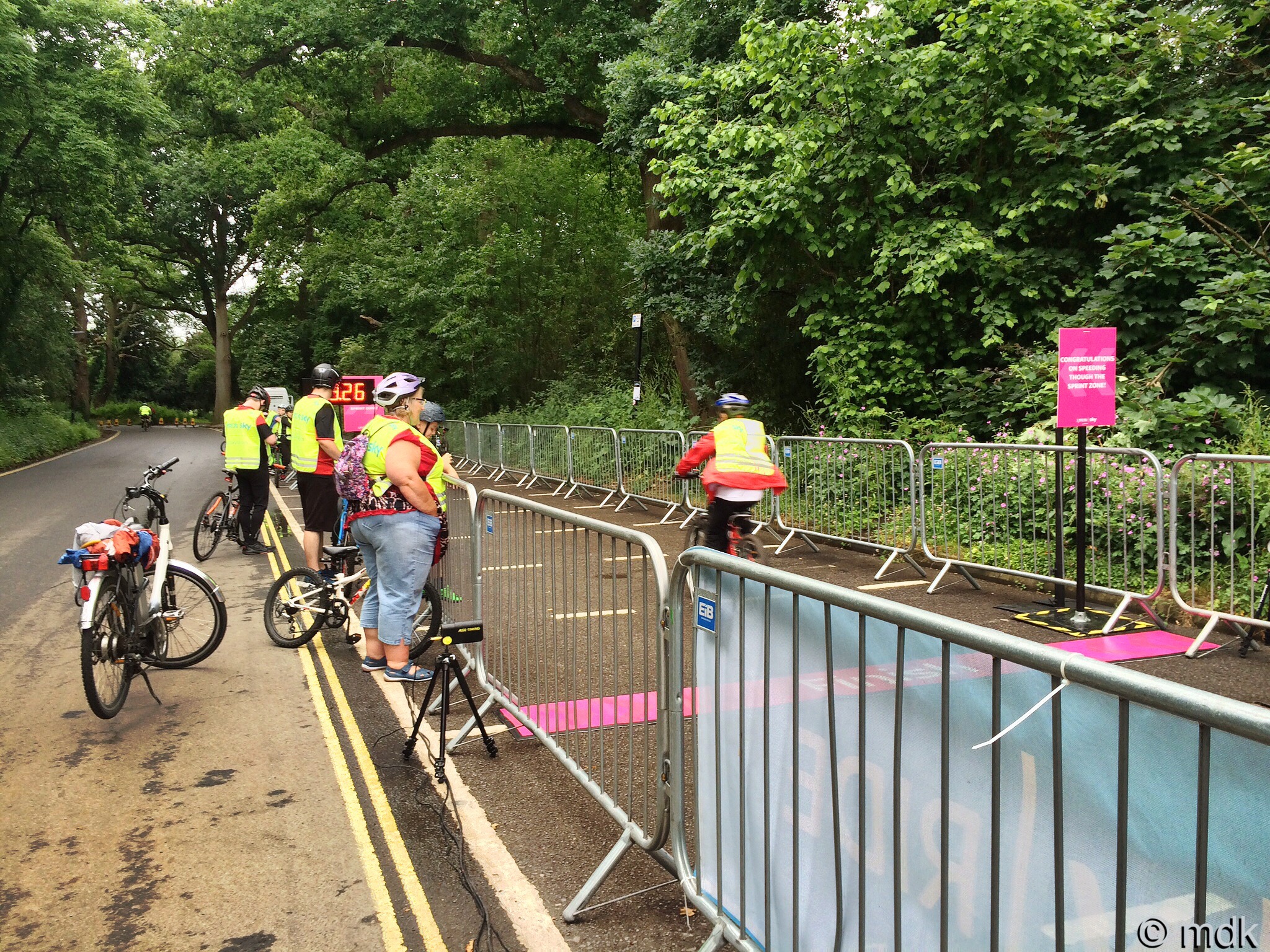 Bikes were whizzing past us as we turned towards Cemetery Lake and, in the end, we walked on the slightly wet grass to avoid being run over. Across the wide expanse of grass, near the normal parkrun start finish line, we could see a mass of tents and cyclists. This was where we parted company with Skyride, at least for a while. We had other things to see… 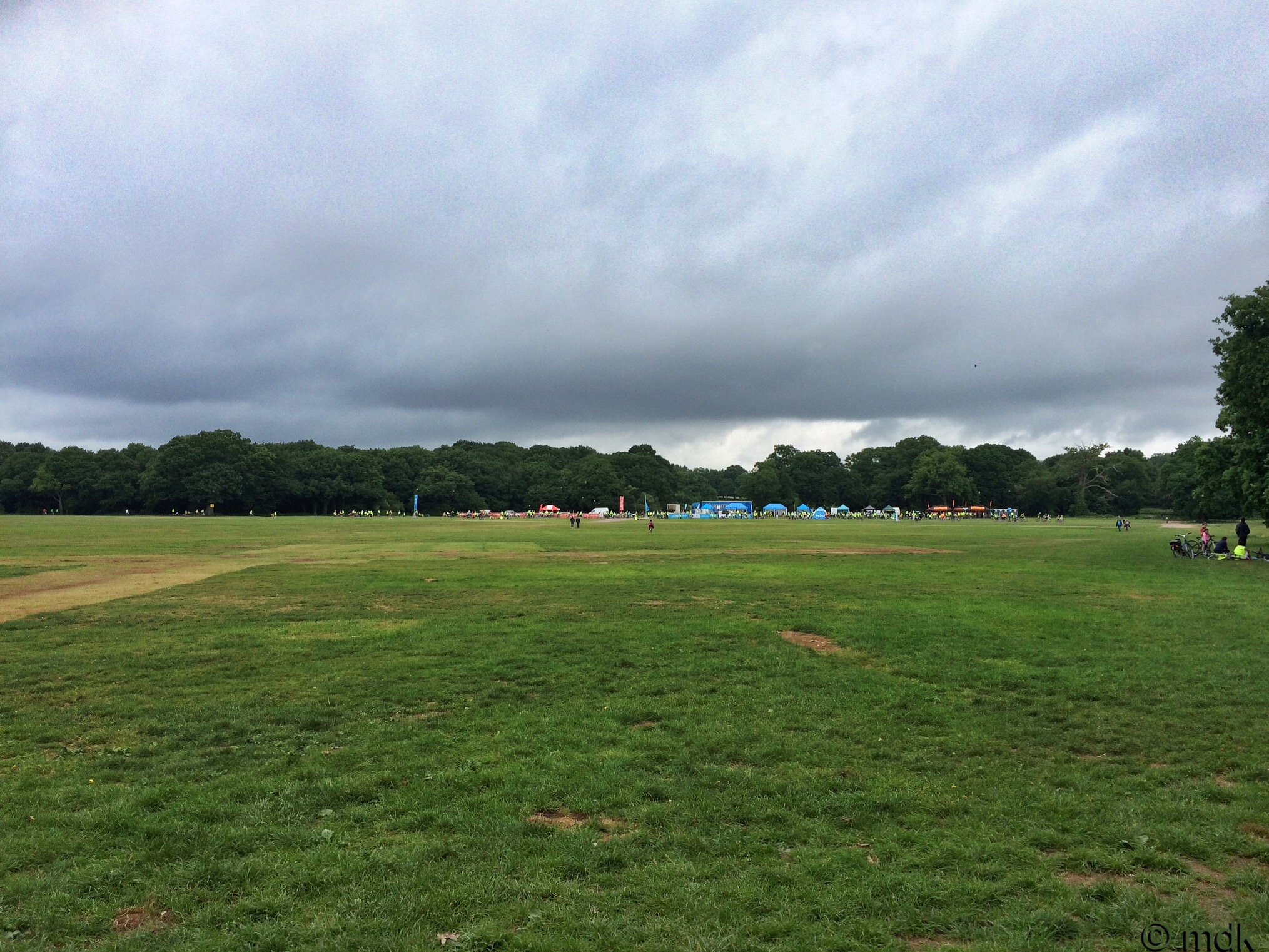 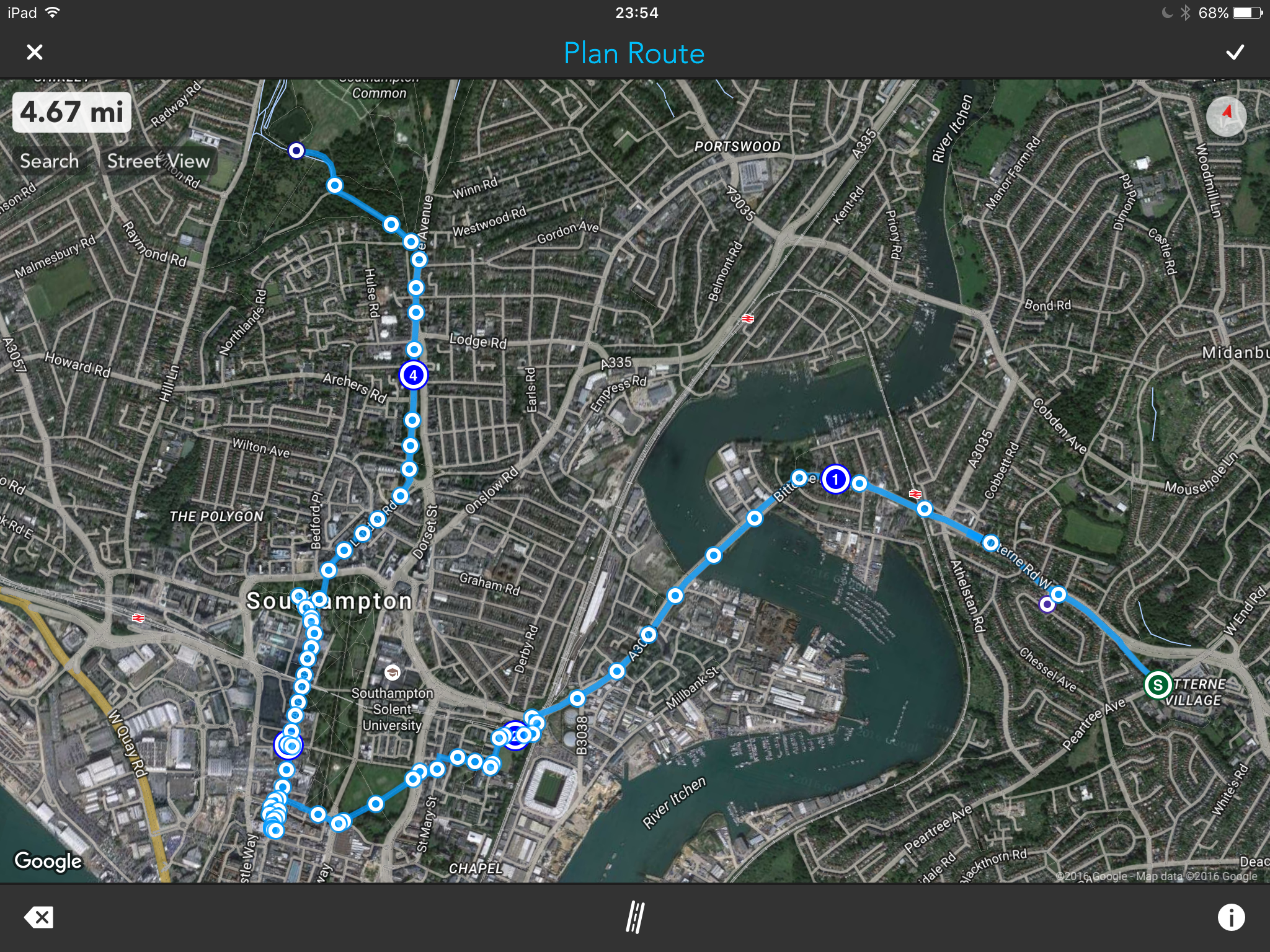