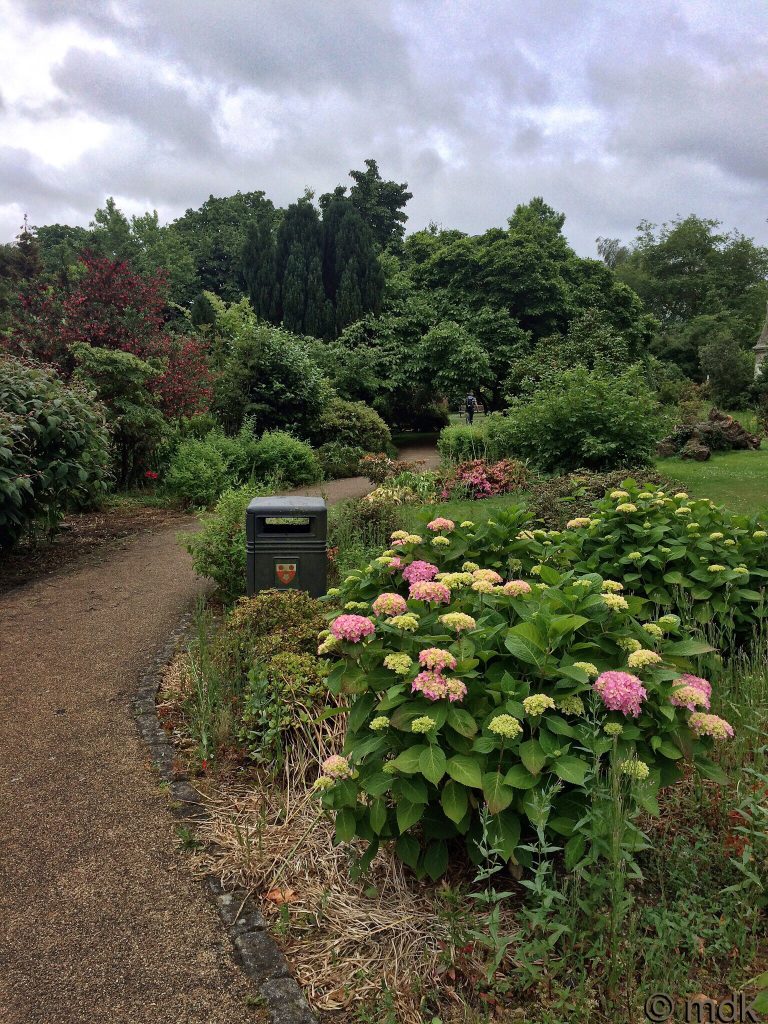 Part of my birthday present from Commando was a spa day at the Devere Hotel, probably the swankiest hotel in the city. Tuesday was the day and the only walking I squeezed in was getting there. It was a march rather than a stroll but I couldn’t resist a stop in the enchanted park, where the hydrangeas are just beginning to flower. Even though the weather was dismal, they brightened up the place no end. The rhododendron that’s hung with artwork for the Roam Art Trail has started to drop petals and the ground below was pink with them. If it hadn’t been such a miserable day with a hint of drizzle in the air I might have wished I could linger there. 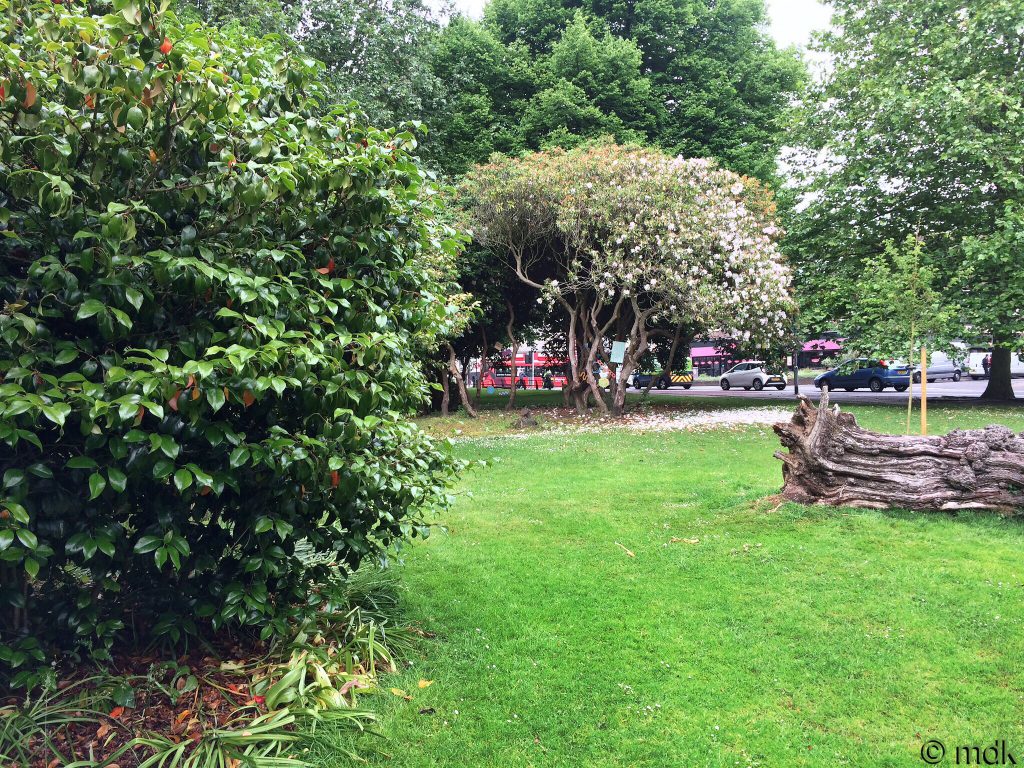 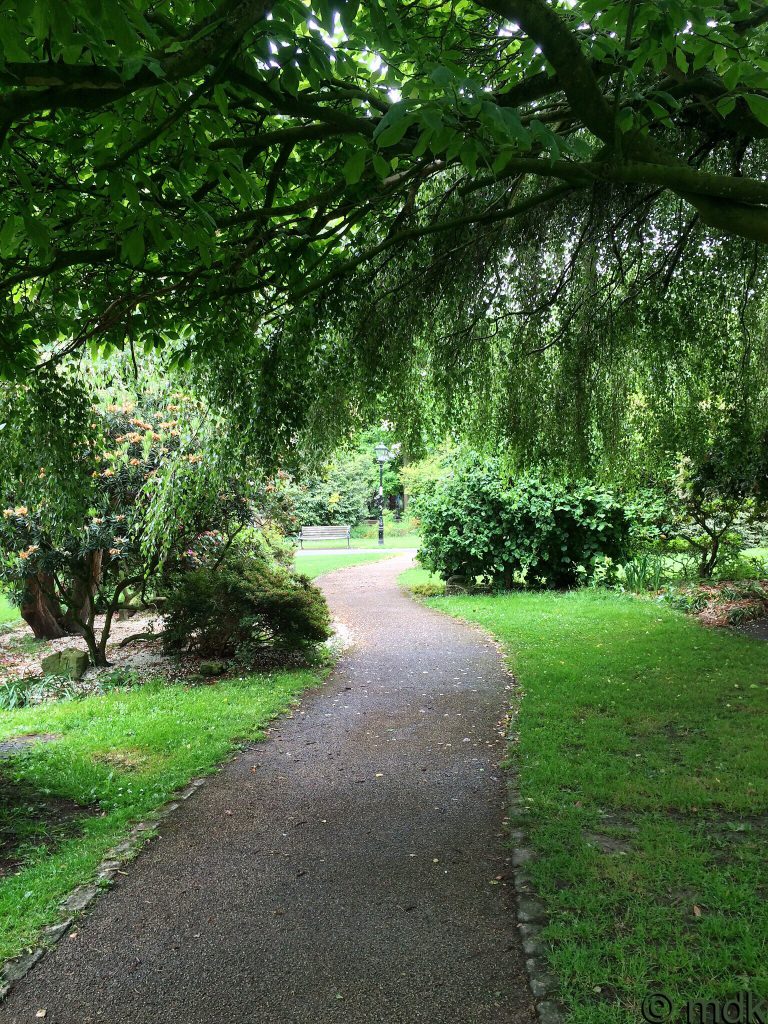 As it was I hurried down to the hotel where I spent the next few hours being pampered. After my relaxing facial I had a little swim in the pool and then chilled in the jacuzzi before lunch. There was some lazing about reading my kindle by the pool before I set off for home. The plan had been to walk back but I felt so relaxed I ended up catching the bus. This is a life I could get used to! 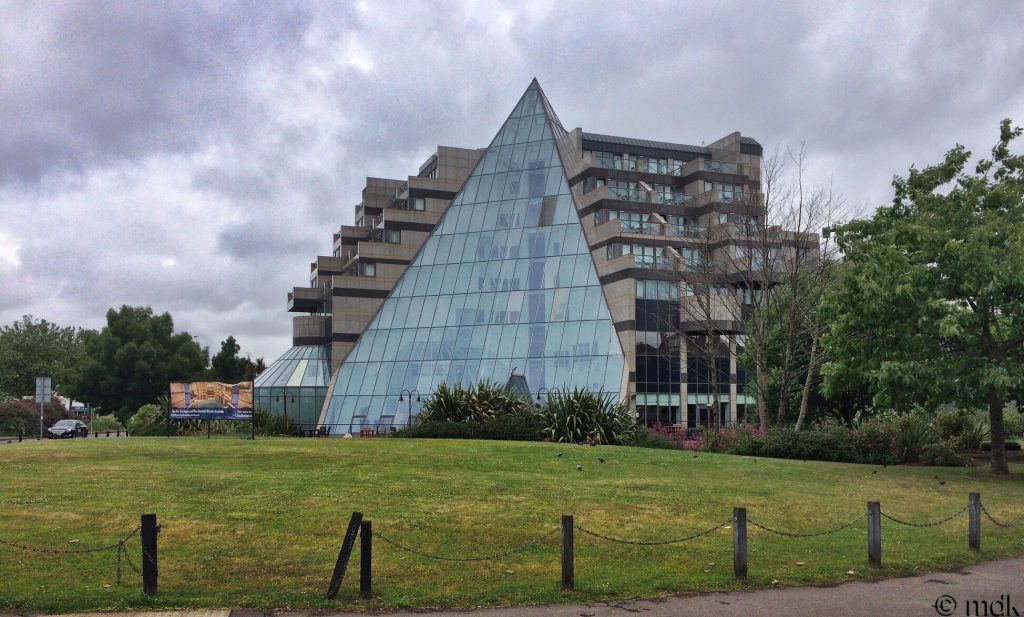 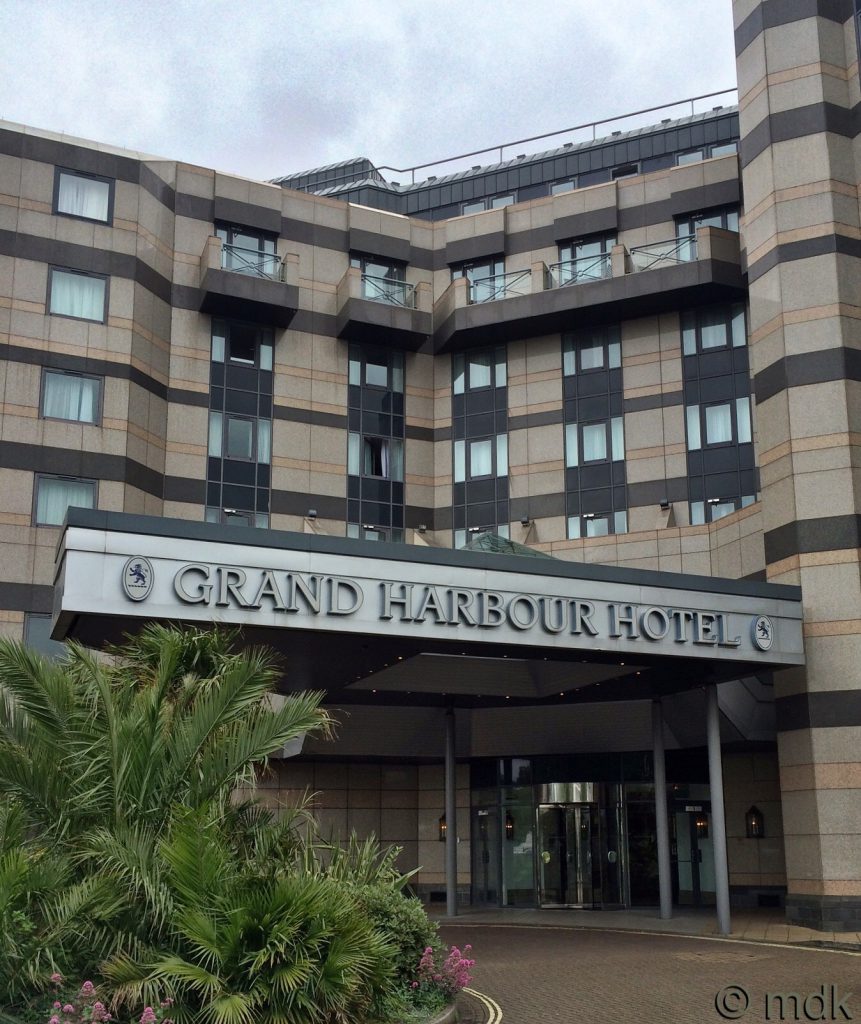 Yesterday the weather and an issue with our Sky broadband needing urgent attention and almost two hours on the phone, prevented walking.  So, despite the ever present threat of rain and a rather humid thundery feel to the air, CJ and I went down to the river this morning. We thought we might see some cygnets there. CJ even bought some bread to tempt them to the bank. 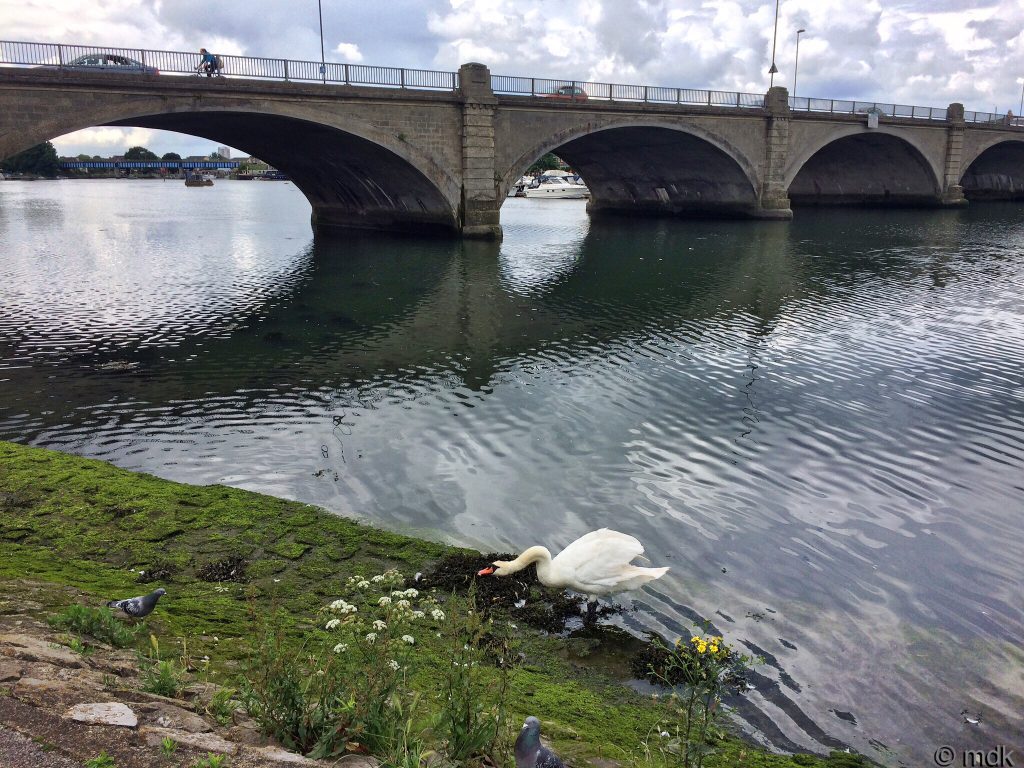 Sadly, any cygnets there may be hiding out on this stretch of river were conspicuous in their absence. CJ fed the swans instead. Of course, the gulls got in on the act, snapping up any bread they could before it hit the water. As we walked up towards the jetty we had a flotilla of swans following us. 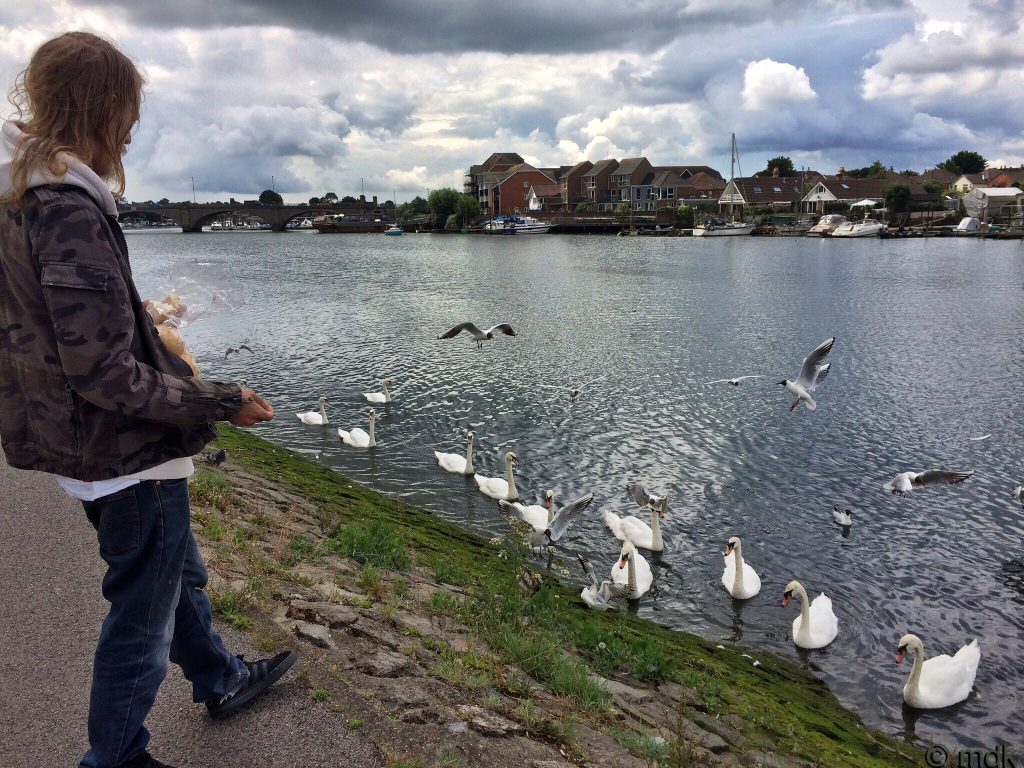 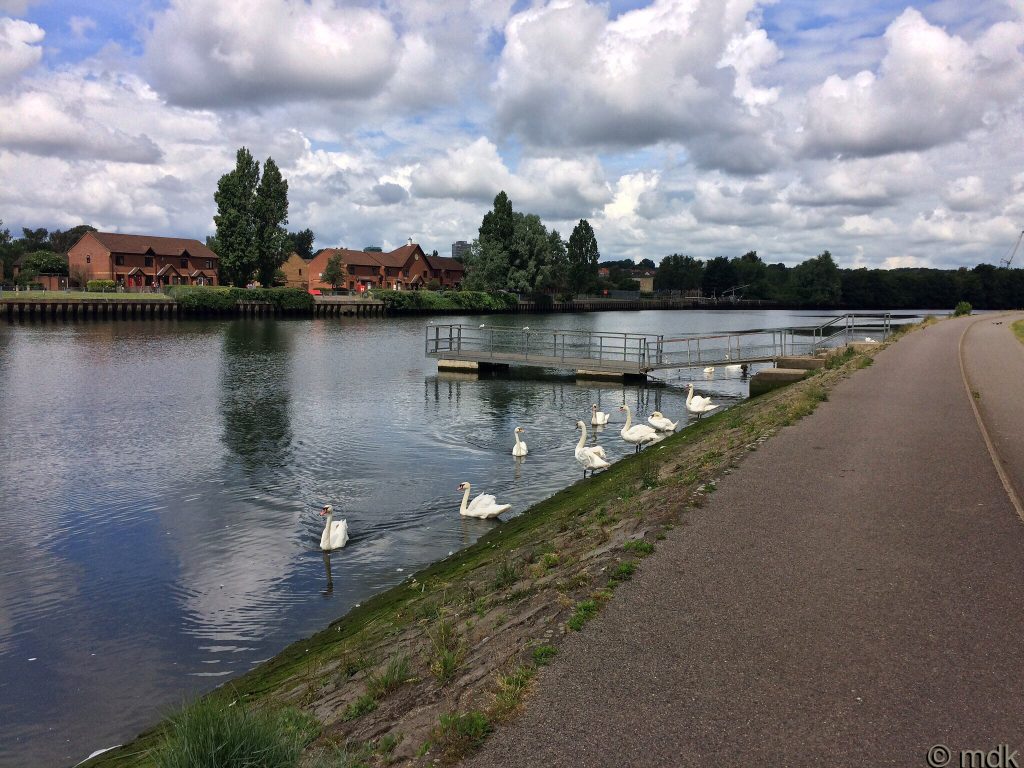 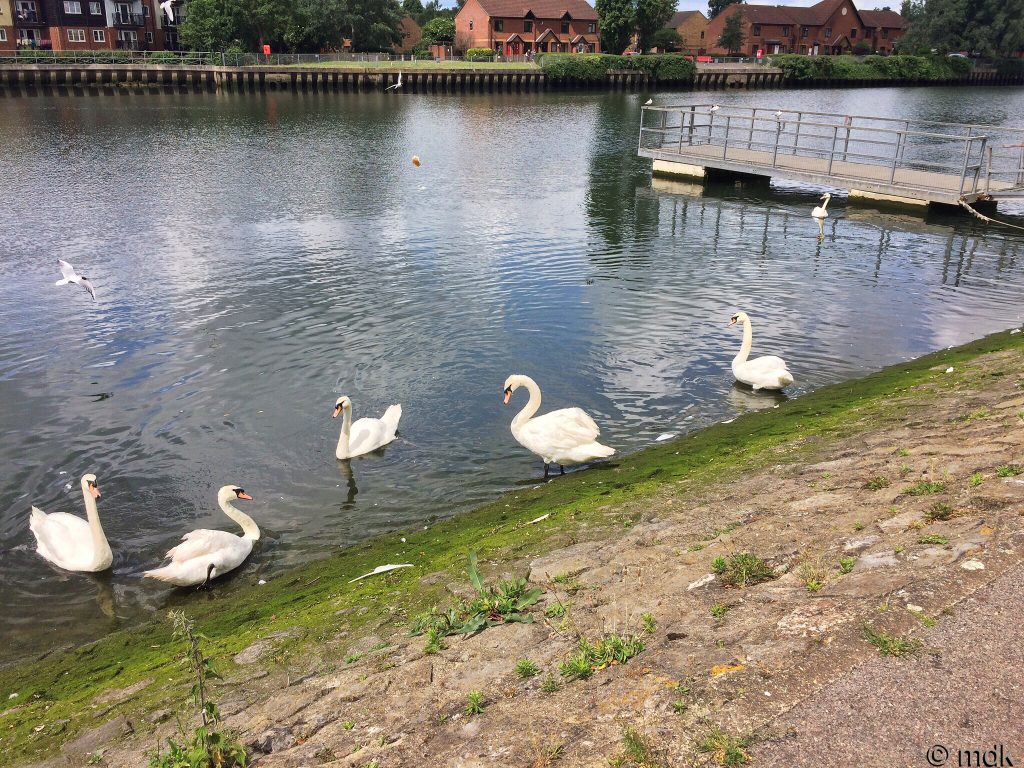 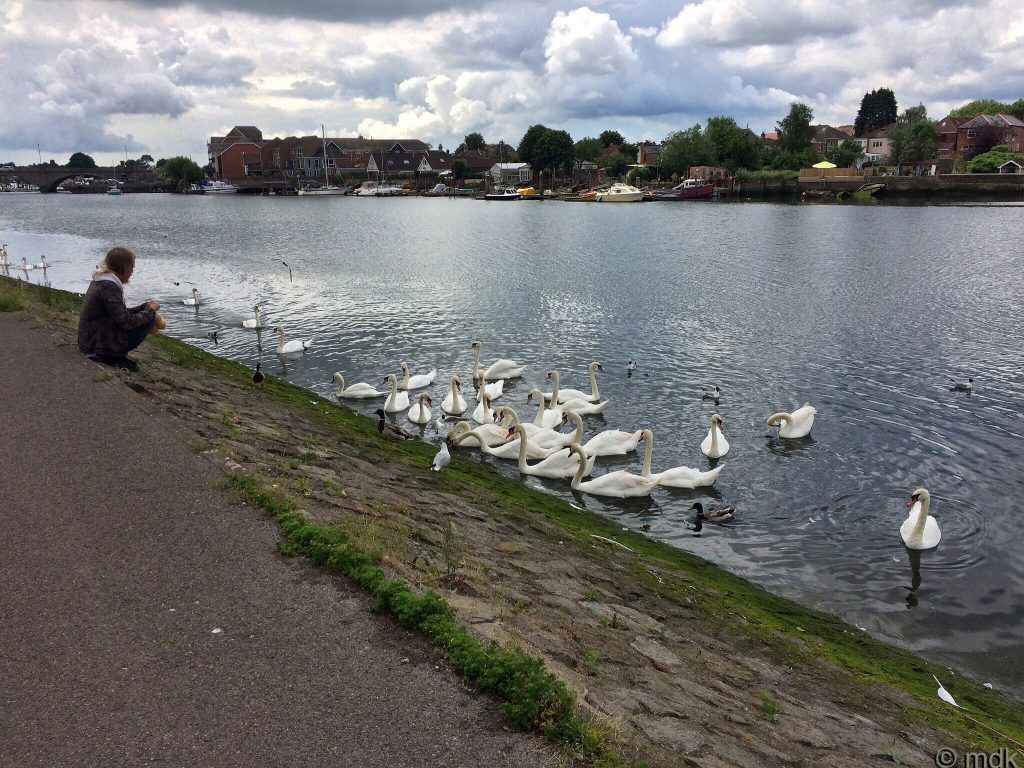 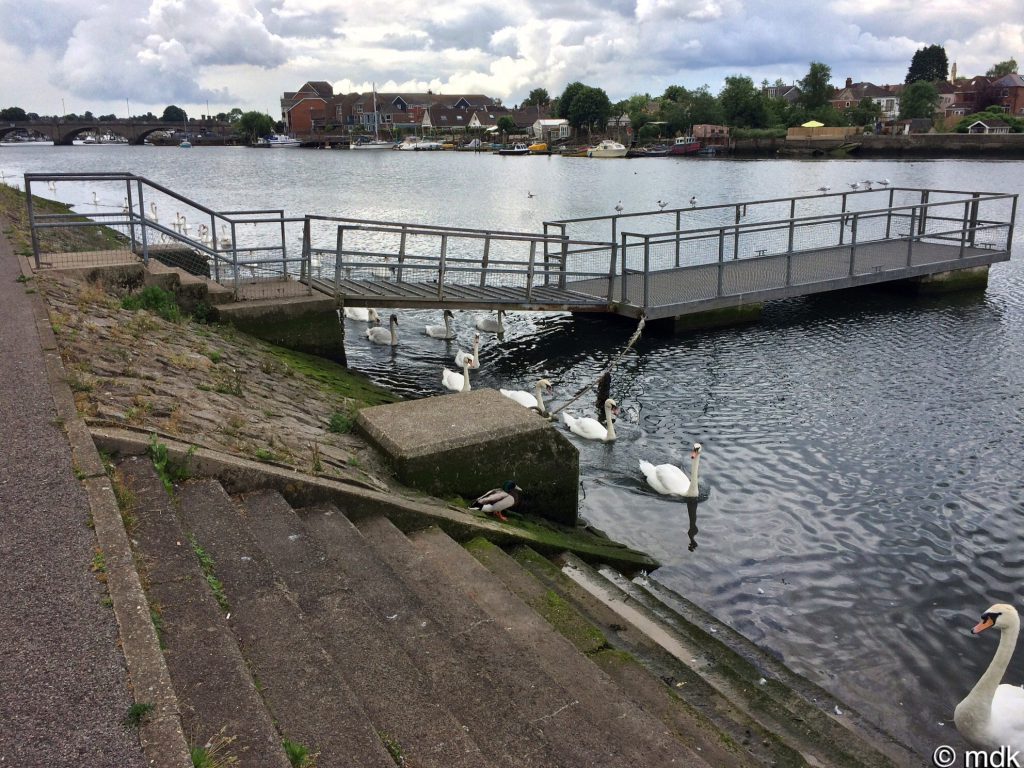 Further on a pretty pink dog rose had somehow found enough soil between the stones of the bank to bloom, along with lots of sedums. In summer the bank is sometimes so filled with flowers, in places, it’s hard to see the water. Still, it makes for a pretty walk. 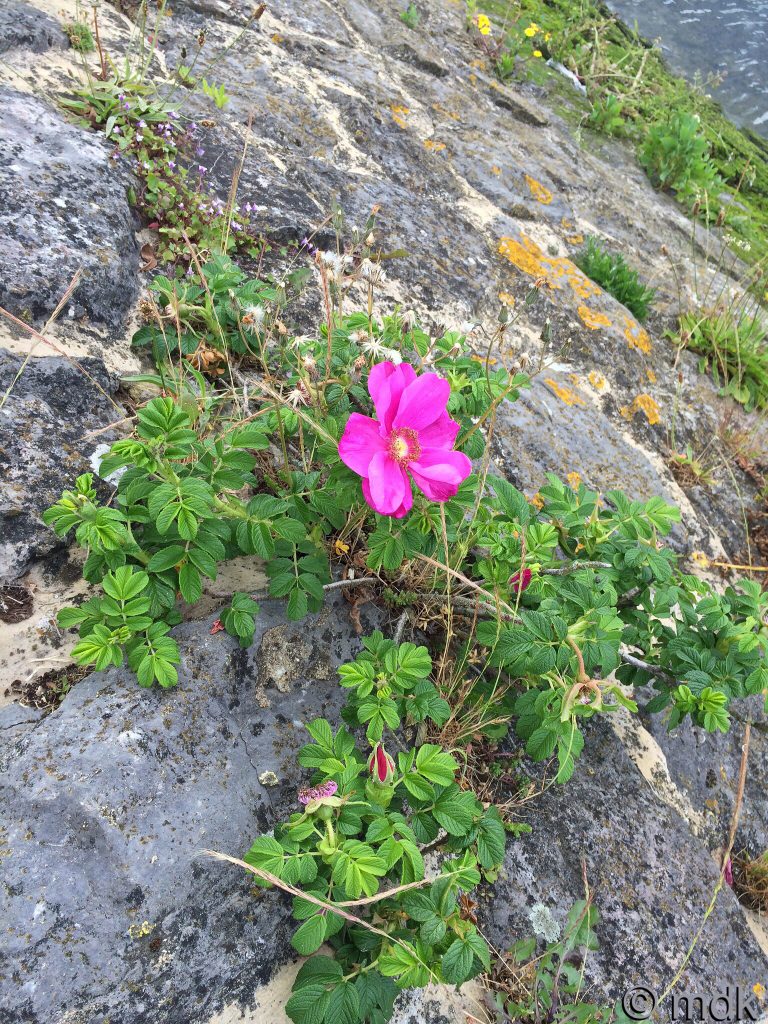 Past Woodmill and across the road we lost the swans who’d been following and gained a whole lot of ducks and greylag geese. There were a pair of swans here, possibly the remaining orphan cygnets from a few years ago, but still no sign of cygnets. With an army of birds swimming up river after us we carried on towards Mansbridge. 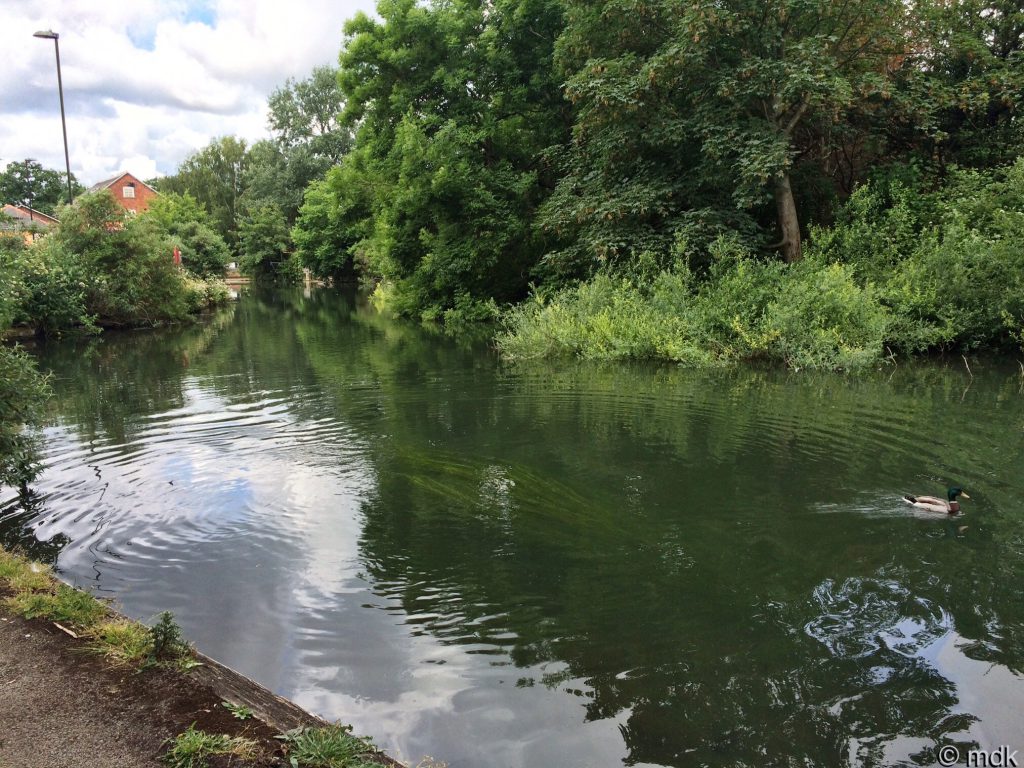 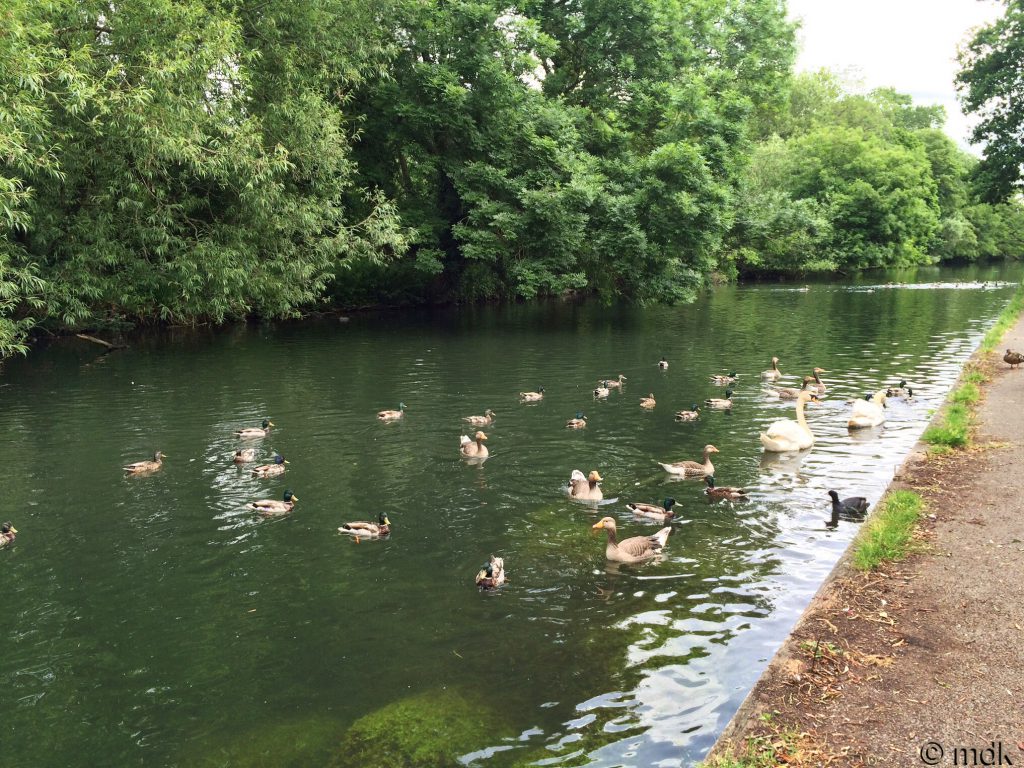 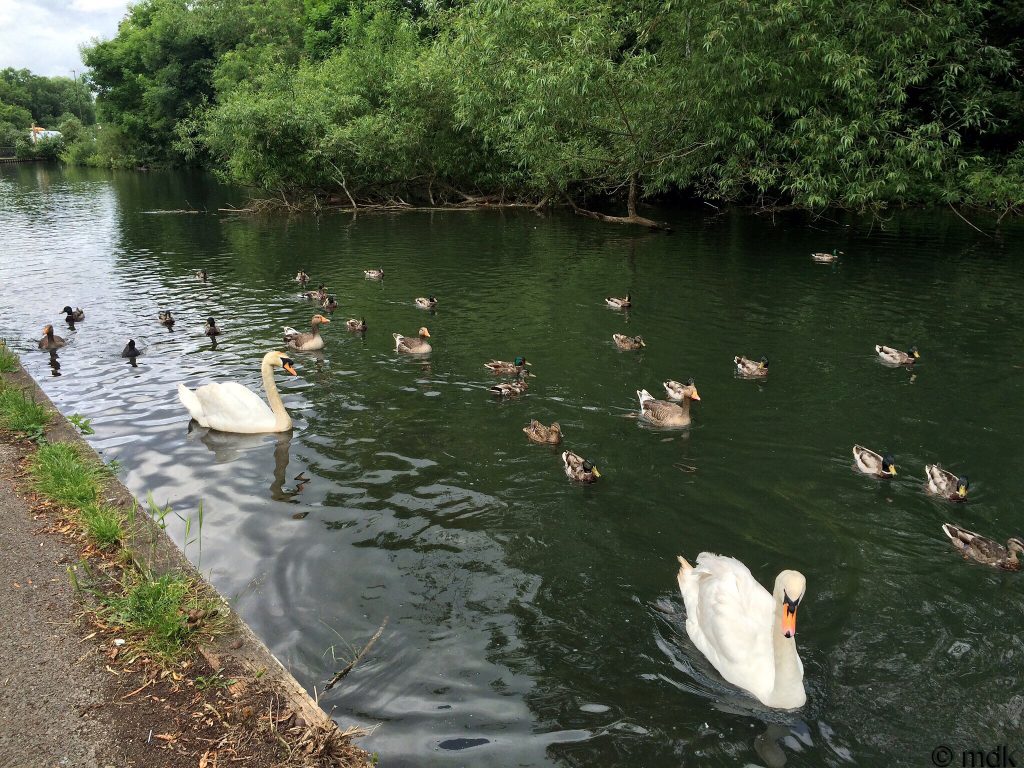 By the time we reached the bridge the bread had run out and we’d lost our followers. We’d planned to sit on the last bench before the bridge and drink the iced coffees I’d bought on the way to the river but it was already occupied.
“We could walk on to Mansbridge Resevoir if you like. It’s not far and there are benches all around it. One of them’s bound to be free,” I suggested.
CJ thought it sounded like a good idea, especially as he’d never seen the resevoir, so, with a quick stop for a photo of the deep purple aquilegias on the bank beside Mansbridge, we set off. 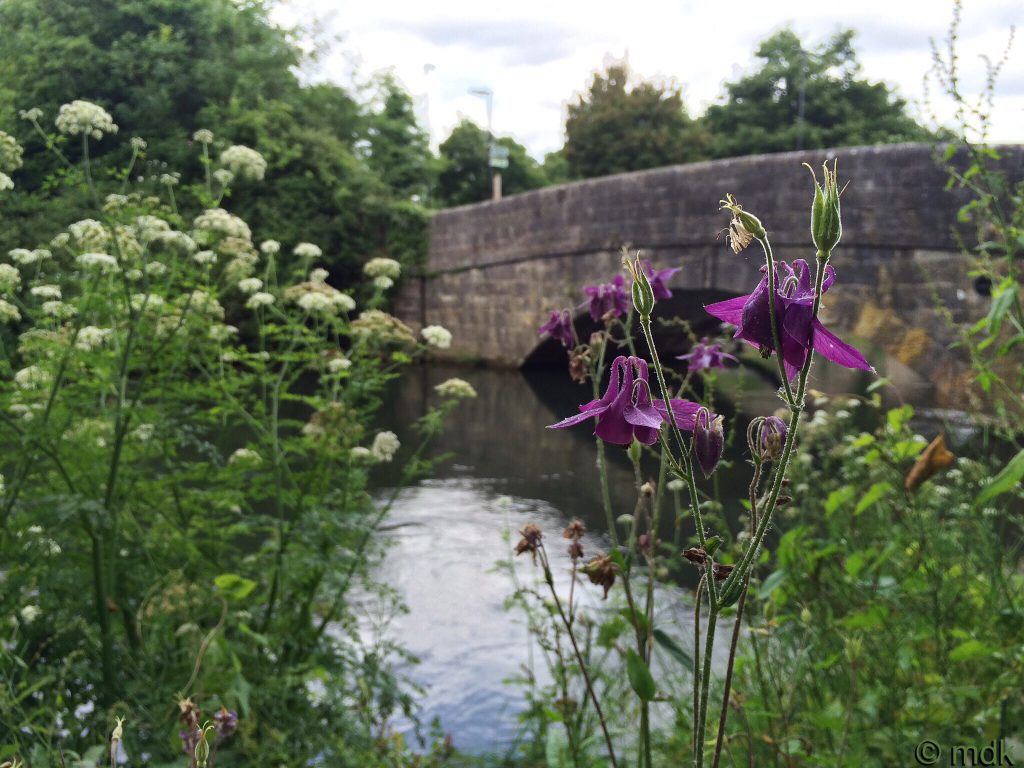 The resevoir is behind Mansbridge Lock and the Itchen Navigation, not far from the bridge. CJ recognised the trail from our recent walk to Winchester but was surprised to find a resevoir hidden behind the trees. The water was so smothered with lily pads it was hard to find anywhere we could actually see it but there was no one else about so we had our pick of benches. We picked the one with the most clear green water in front of it and settled down to enjoy the reflected sky. 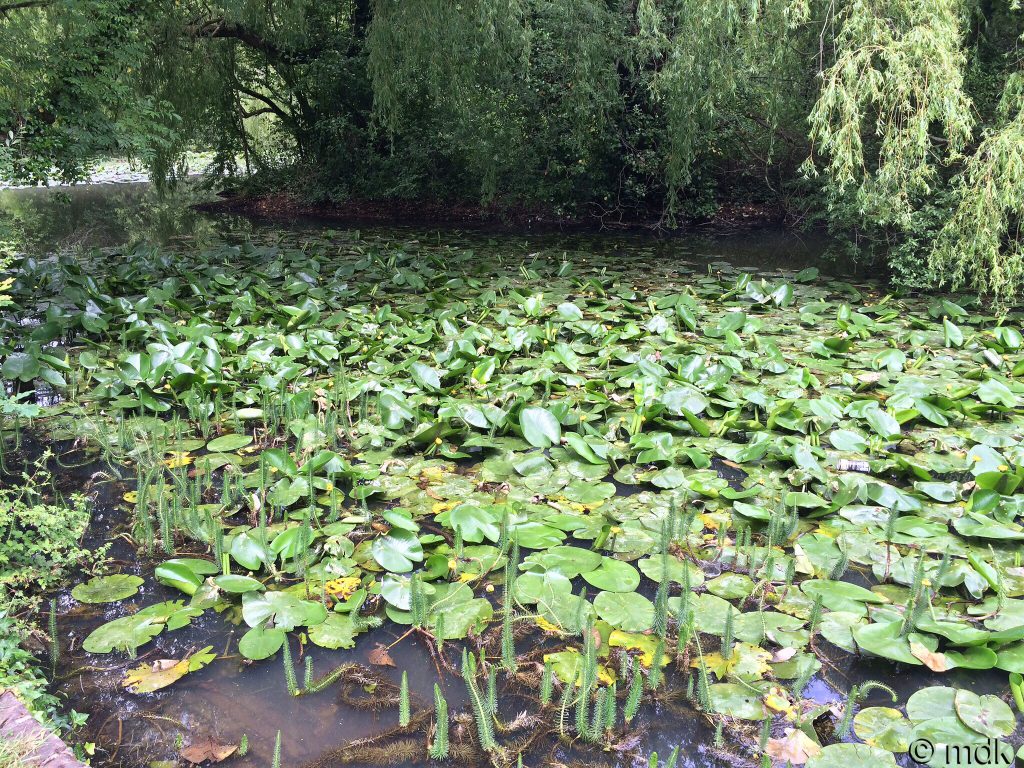 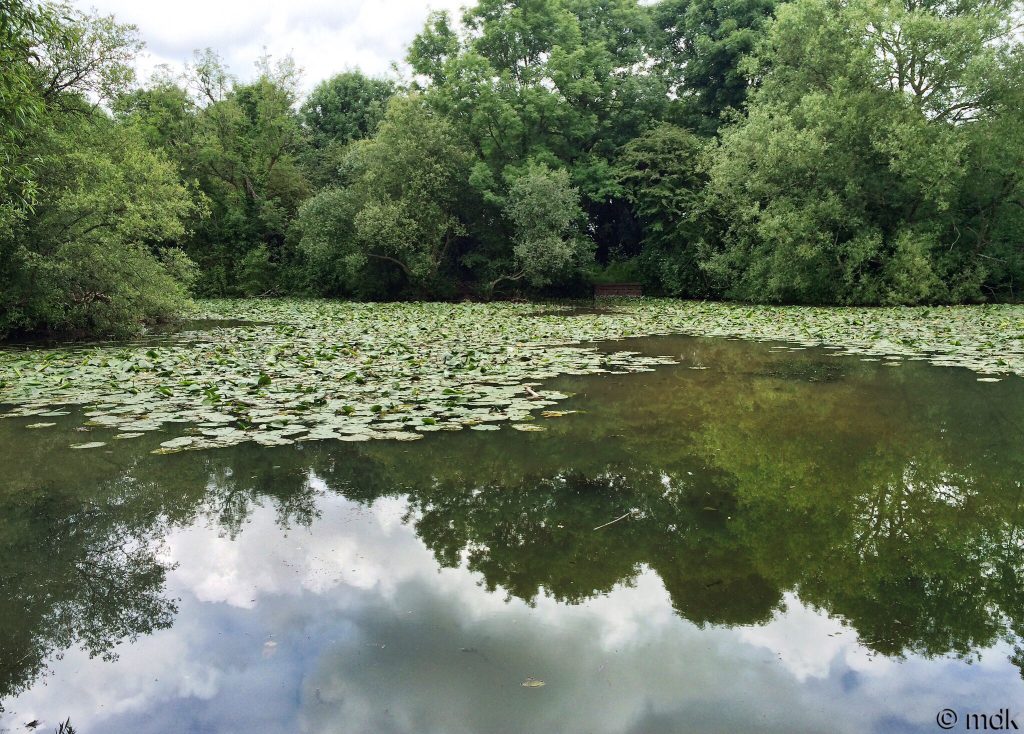 Soon we were joined by a coot and two little chicks. CJ was annoyed he hadn’t kept any bread to tempt them nearer the bank. We sat and watched them swimming around the lily islands while we drank our coffees. They have quite a comical swimming style, bobbing their heads forwards like mechanical toys. We found them quite amusing. 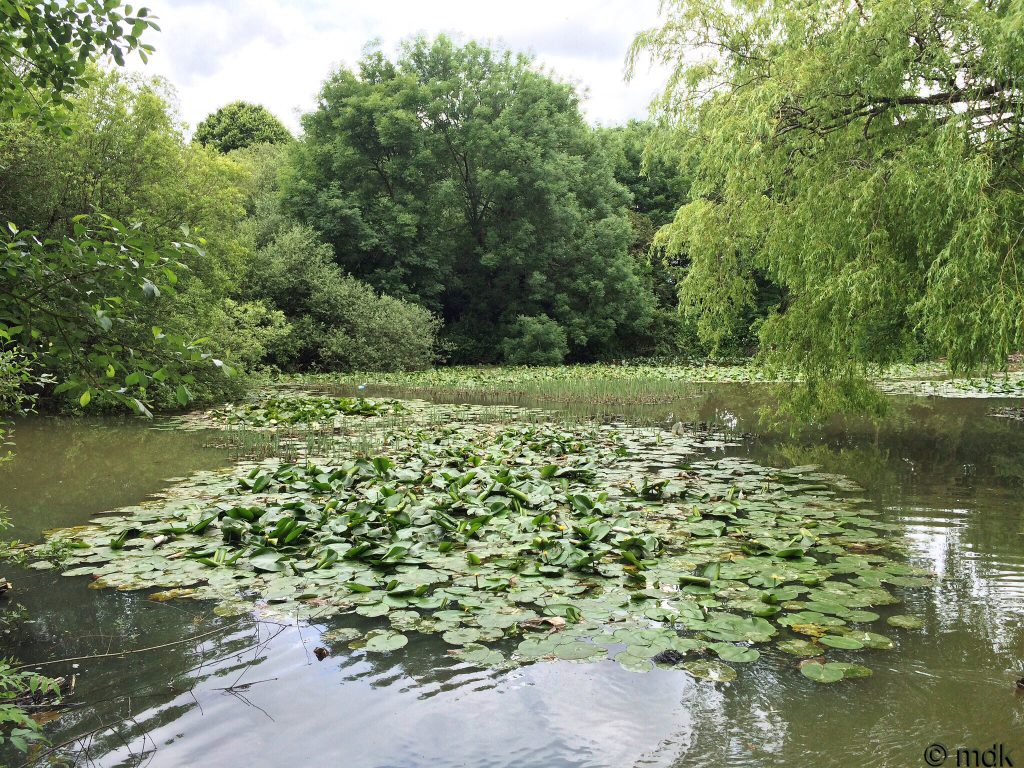 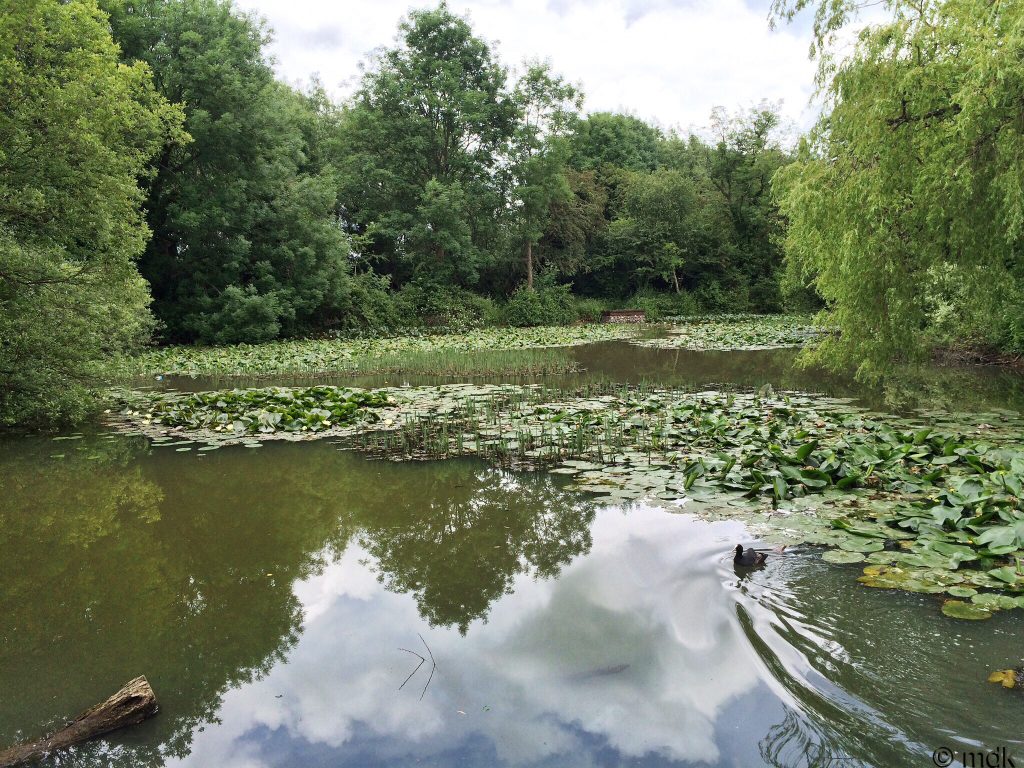 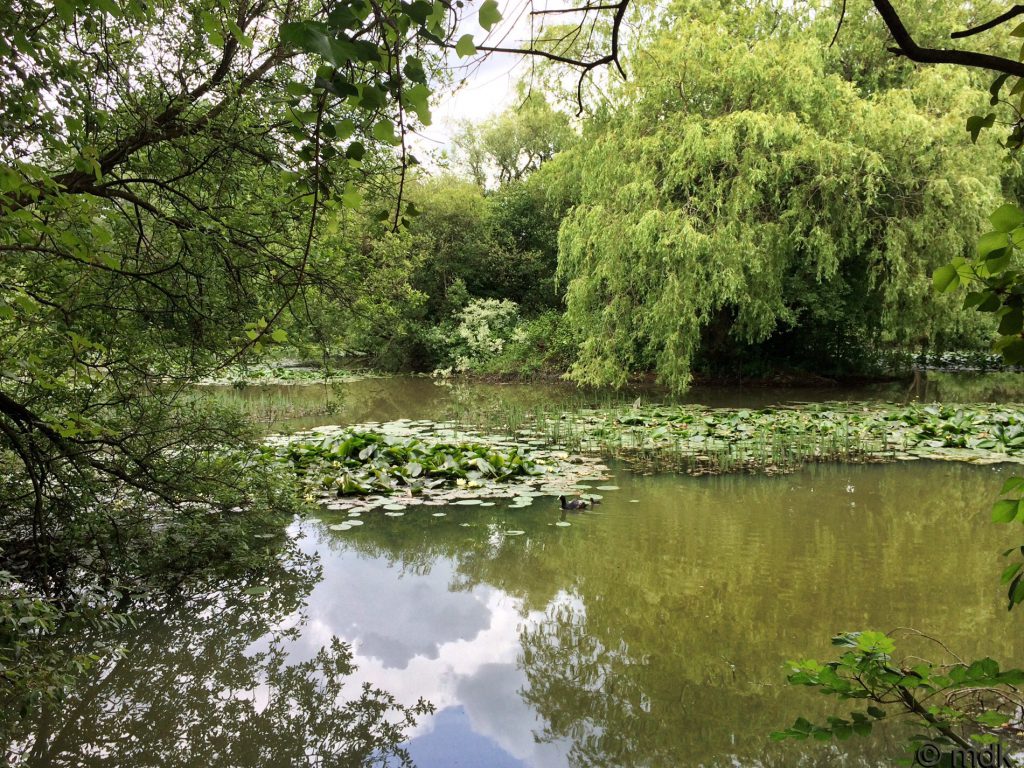 With our drinks finished and a bin found to dispose of the cartons, we set off to walk around the perimeter of the resevoir just in case there was any other wildlife worth seeing. We found plenty of blackberry flowers, in shades from deep pink to white, a bee and a dog rose with an insect of some kind, but no other water birds at all. 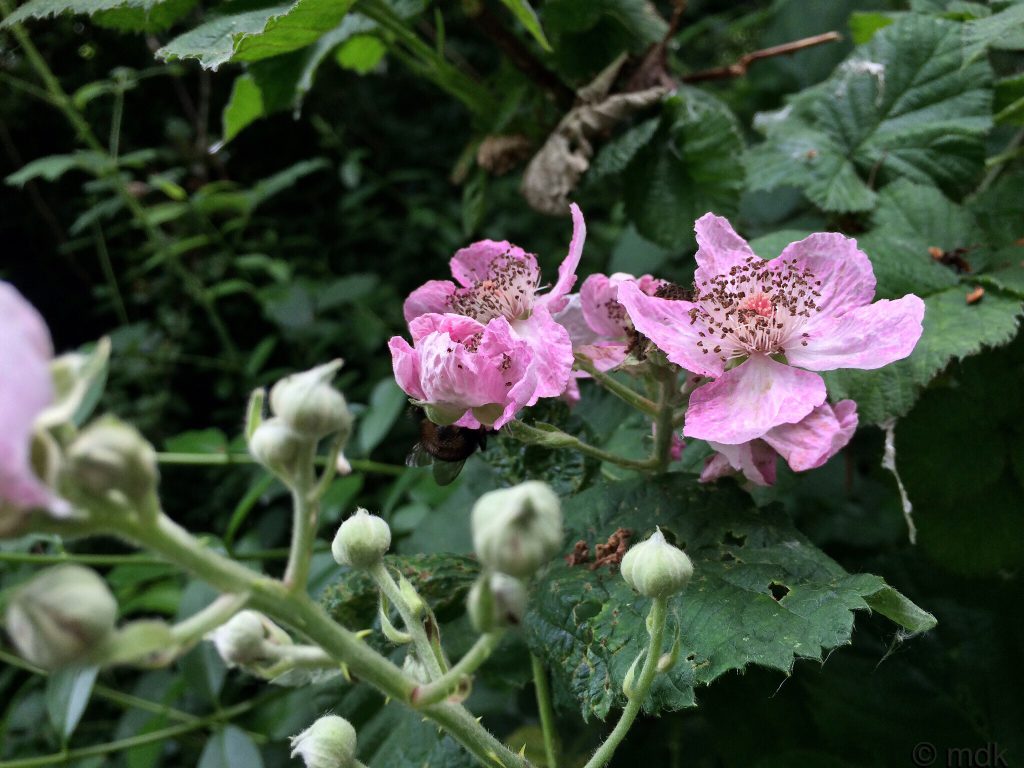 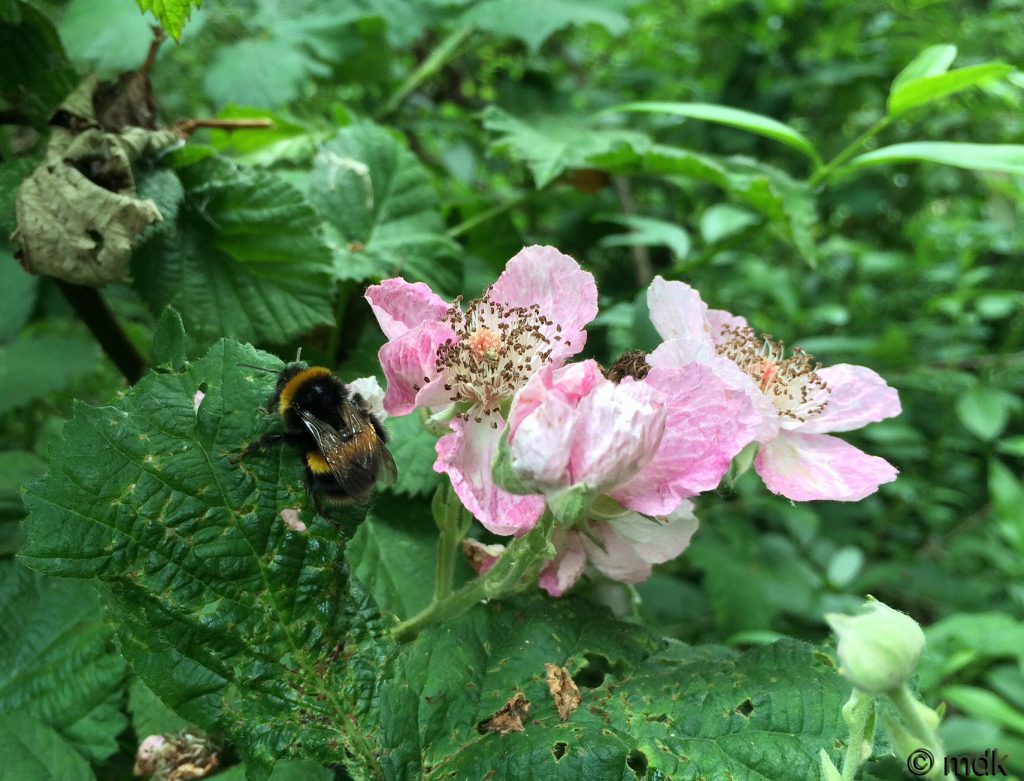 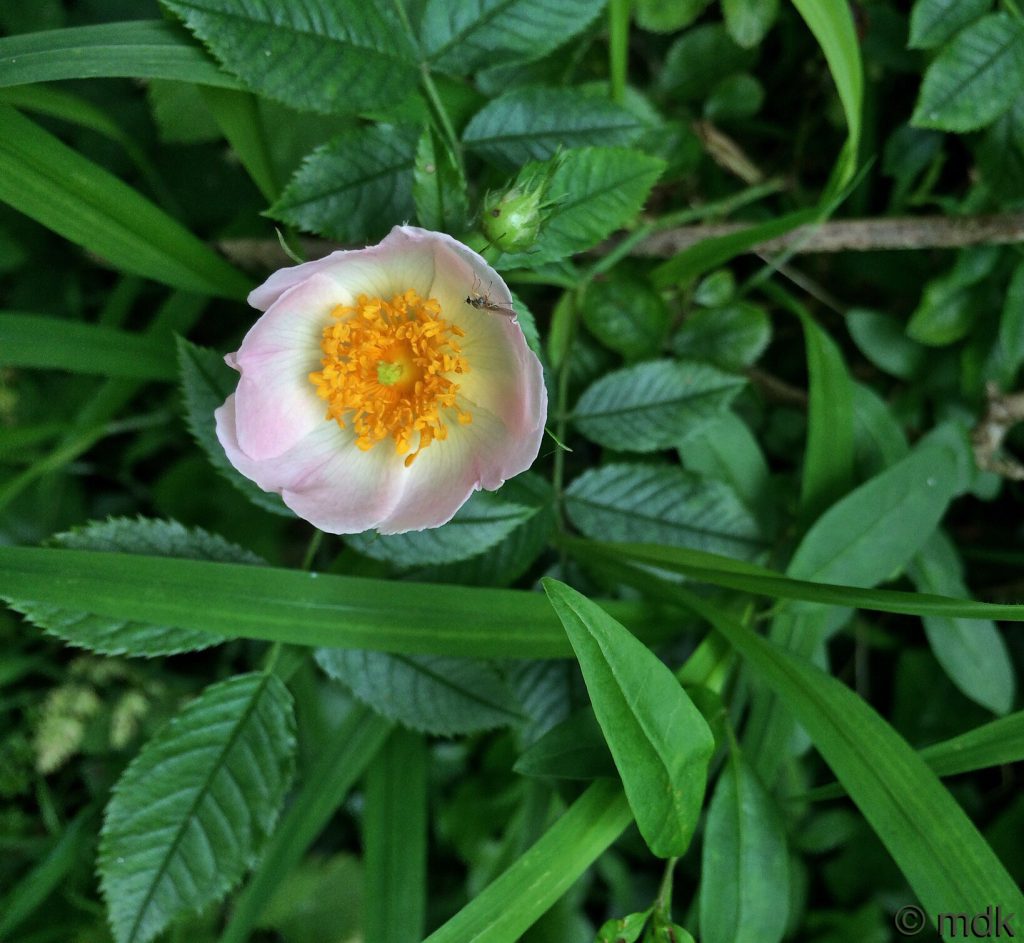 Most of the water lilies we’d seen from our bench had small yellow flowers but, on the far side of the lake, there were white water lilies. If there’d been a bridge it would have been a living Monet painting. The flowers were so beautiful I took far too many photos but none really captured the glowing beauty. Each flower looked as if it had a light inside. 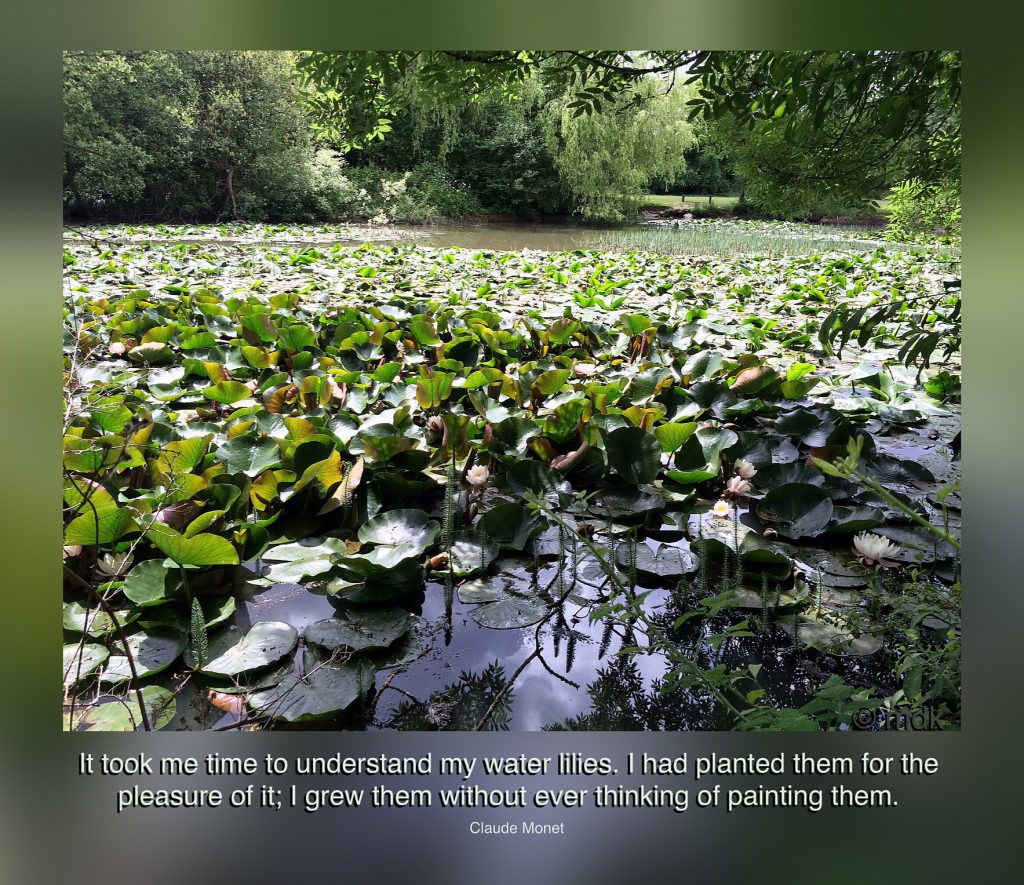 “It makes me wish I could walk on water so I could get closer to them,” I said to CJ.
“I wouldn’t recommend it. I bet you’d sunk in the mud and be stuck forever. Maybe if you had a canoe though…” 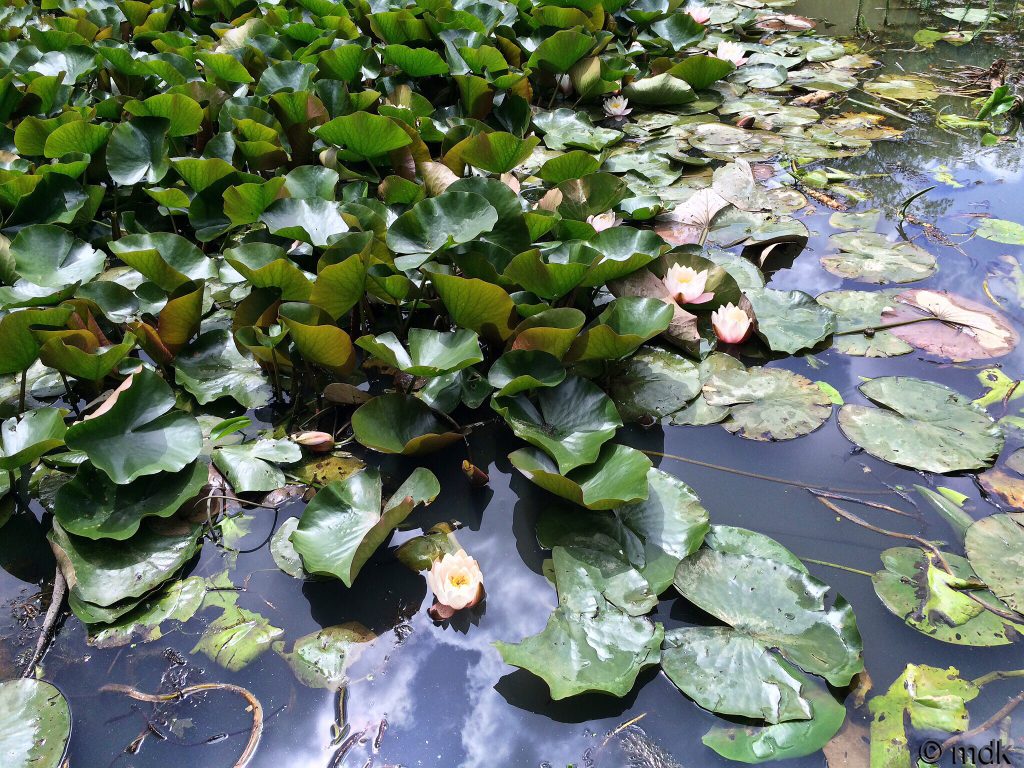 Soon enough we were back where we started, retracing our steps back to the bridge. The clouds slowly cleared as we climbed Gaters Hill. By the time we emerged from Cutbush Lane at Townhill Park and peeked through the fence at the building work the sun had come out. Now why couldn’t it have done that at the start of the walk rather than near the end? 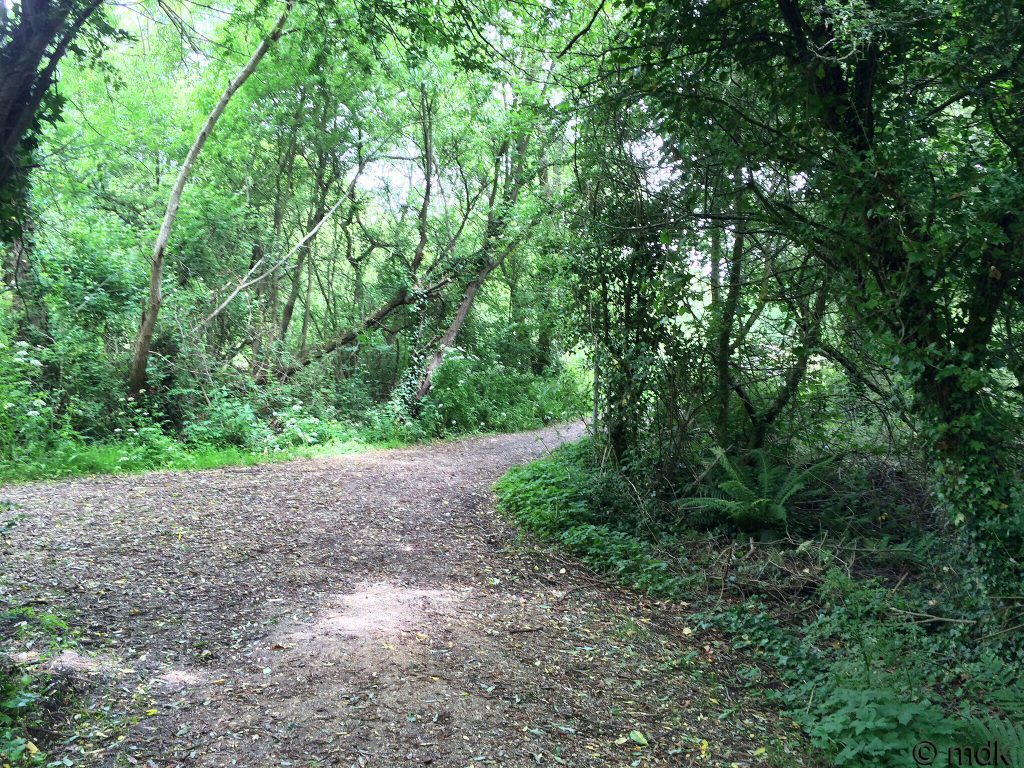 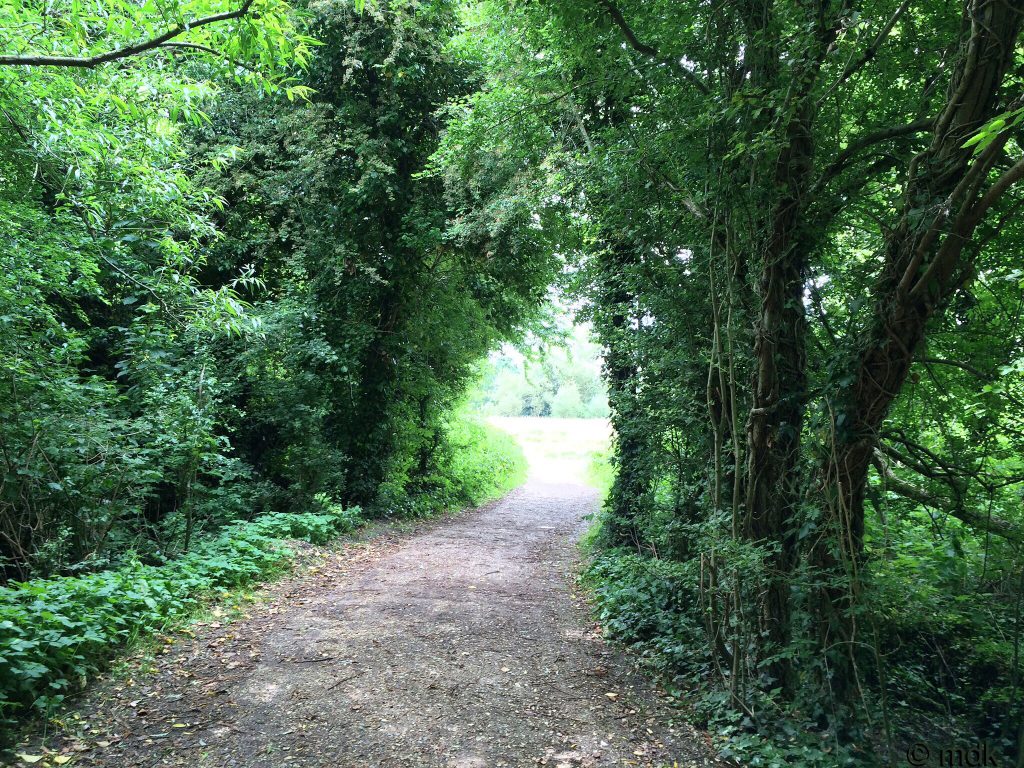 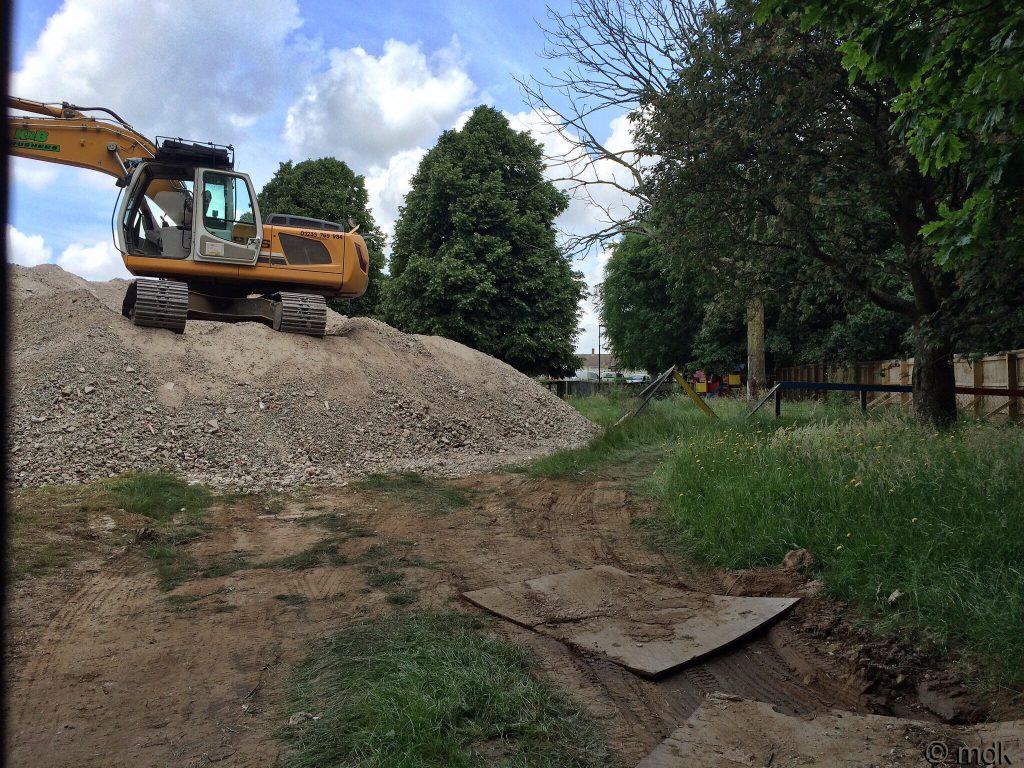 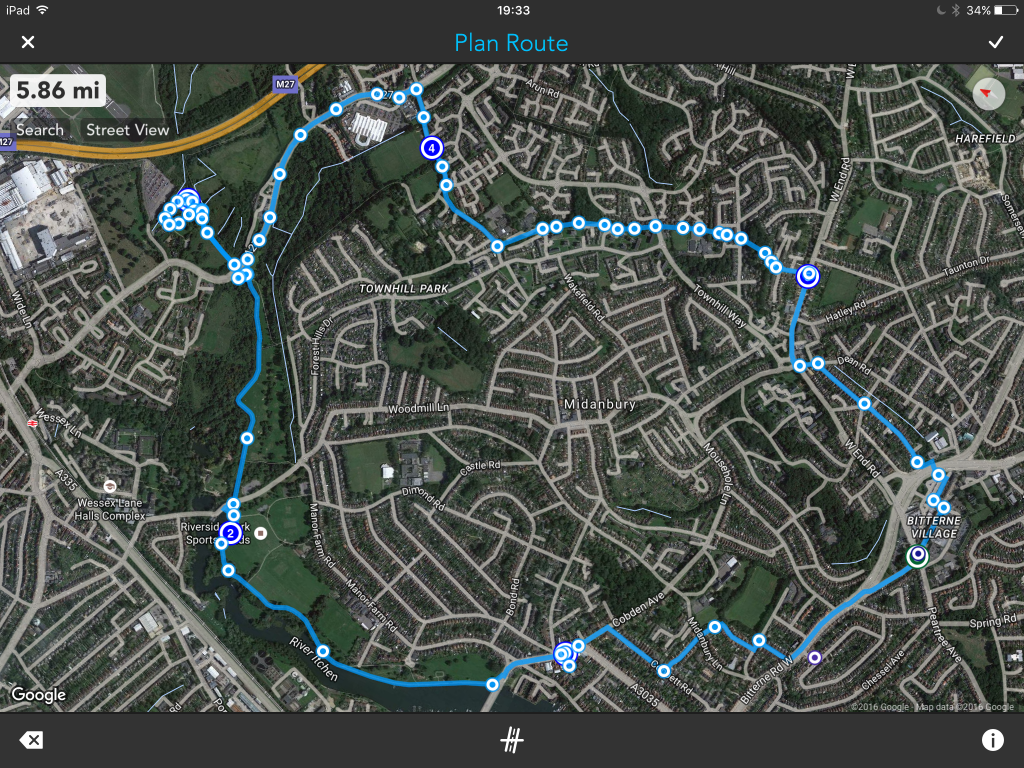