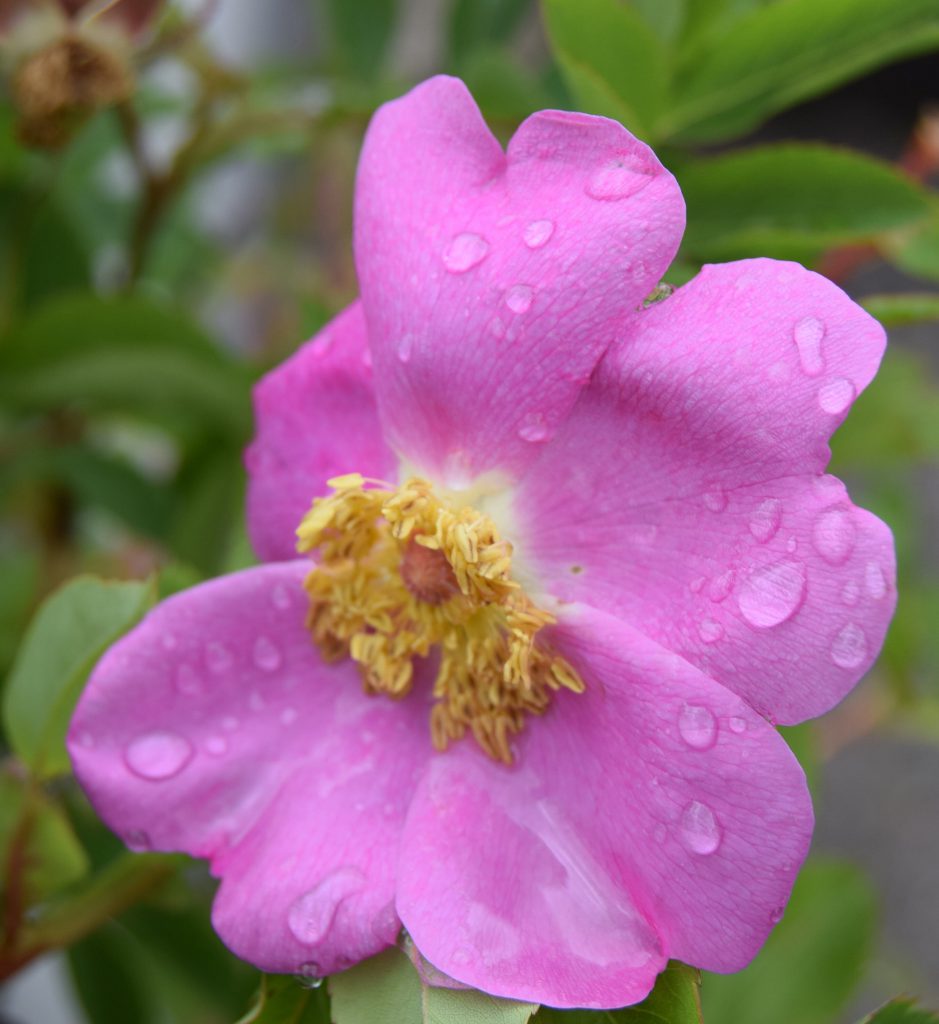 This afternoon I had my second outing with the fancy pants camera.
“I’m going to the Itchen Bridge to do Kenyan Hills,” Commando said, not long after he got up. “Why don’t you bring the new camera and get some practice using sport mode before the RR10 on Wednesday?”
“What are Kenyan Hills?” I asked.
“Basically you run up and down hills one after another to improve your stamina. The running club usually do them on Monday training sessions, six times across the Itchen Bridge, but I always miss them because I have to work.”
Frankly it sounded very much like torture that should probably be banned under the Geneva Convention, especially on humid days but Commando did have a point about practicing with the camera so I went along.

While Commando did a quick lap around the base of the bridge I got my eye in with a photo of a dog rose. Actually there were several out of focus photos of flowers until I remembered about the autofocus but we’ll gloss over that. When Commando came back and headed up the steep steps onto the bridge I realised my time would probably have been better spent getting into position. Obviously I couldn’t keep up with him so I missed his first outbound lap.

In fact, by the time I puffed and panted to the top of the steps Commando was nowhere in sight. It was amazing how fast he’d got over the crest of the bridge when the muggy weather made climbing the steps at a sedate pace feel like a struggle. I positioned myself at the centre of the bridge and waited, my eyes fixed on the distant town side looking for a Commando shaped speck to appear. When he did he took me by surprise by being on the opposite side of the road. Despite this I focused the red dot in the centre of the viewfinder on him and clicked away. Unfortunately there were quite of few pictures with cars in the way but a few came out quite well. 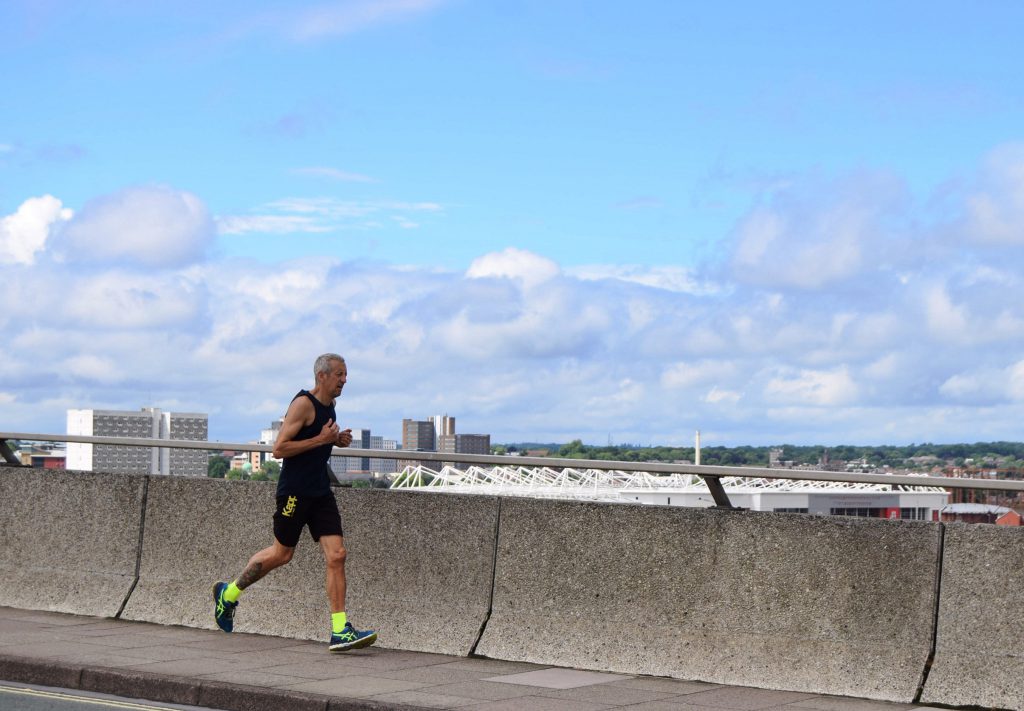 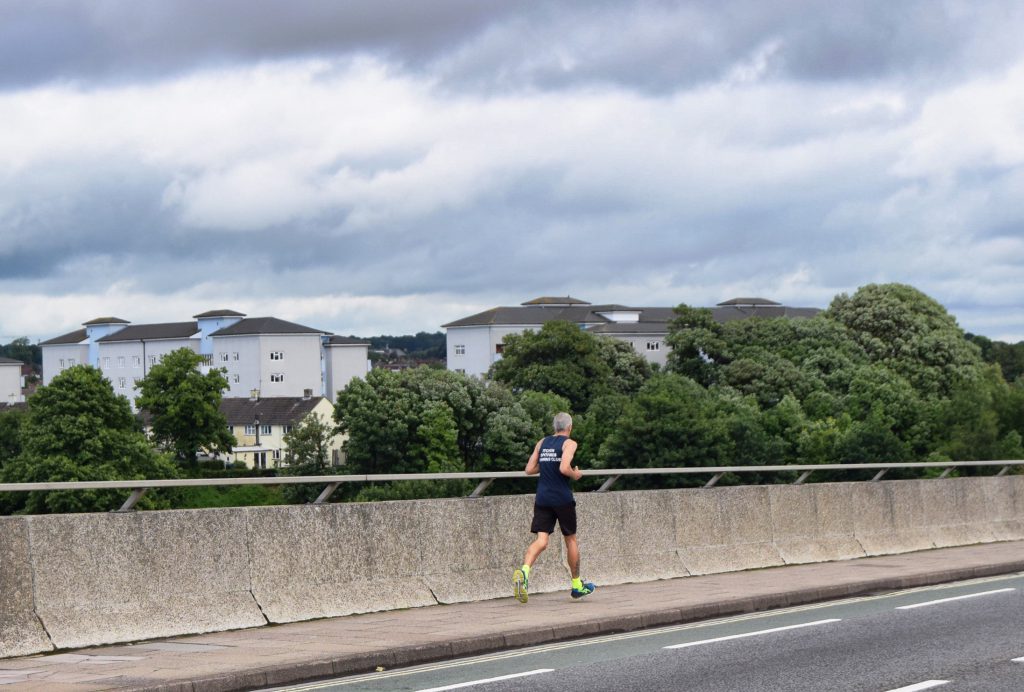 When he disappeared down the steps and off the bridge again I took a few pictures looking down towards Woolston to fill the waiting time. The first, captured the jetty at the start of the shore and the sail boats on the water quite well but could have been crisper. The second, looking down on the houses and flats where the floating bridges used to be was clearer but the composition could have done with some more thought. Still, I had half an eye watching for Commando so I was hardly concentrating. 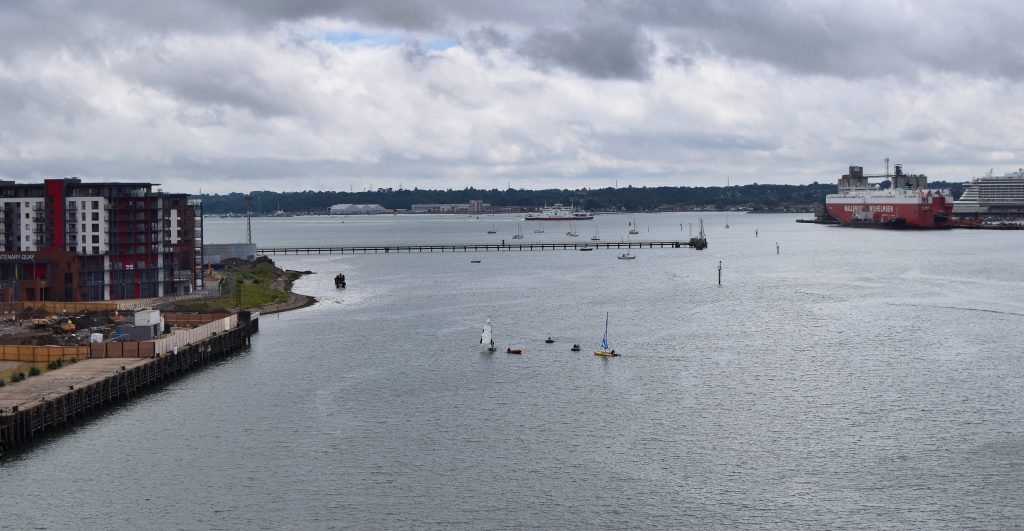 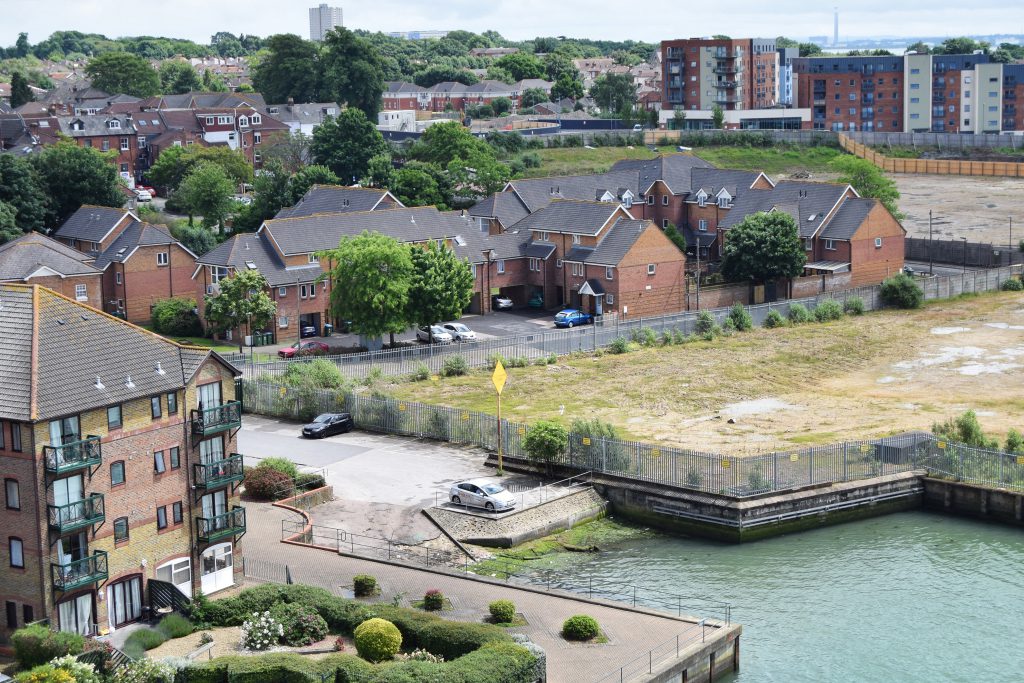 It didn’t take him long to run down one set of steps, under the bridge and up the steps I’d struggled up earlier. He looked amazingly fresh seeing as he’d already run twice across the almost mile long bridge and up and down five sets of steps. When he got close enough I snapped away not really knowing if what I was shooting was going to be any good or not. 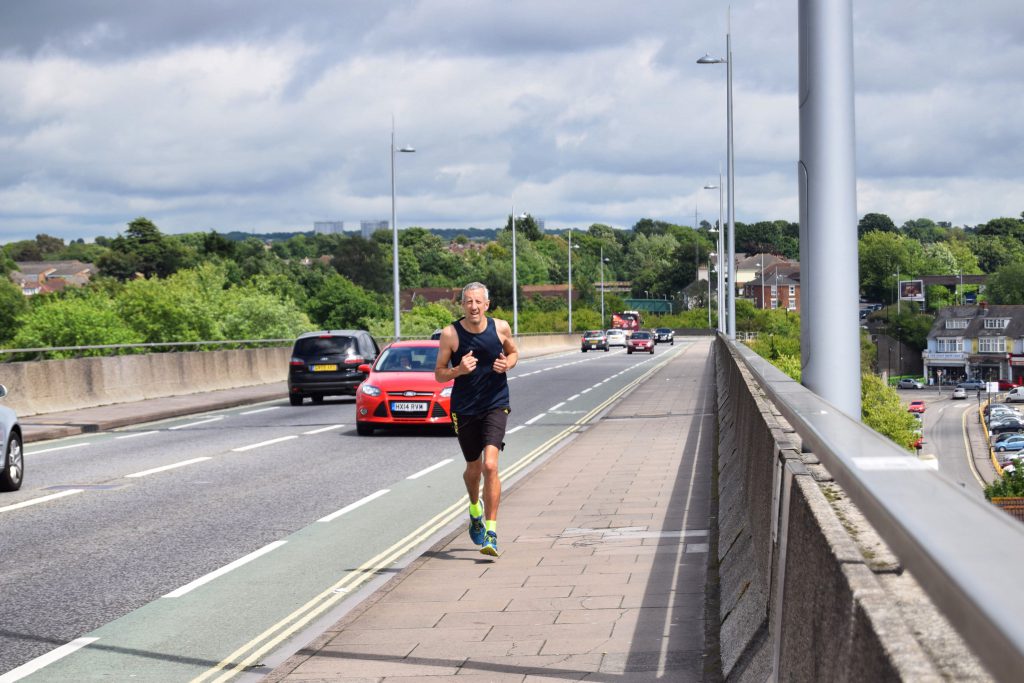 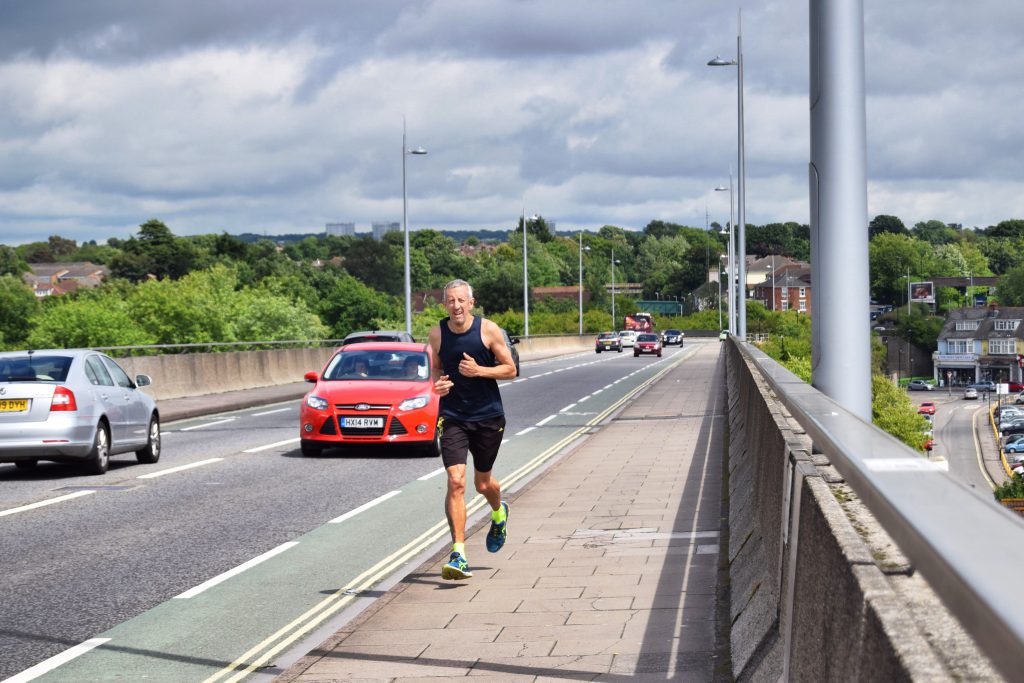 Now I’d seen exactly how the Kenyan Hills worked I realised I’d need to be on the other side of the road before Commando came back. Obviously, walking back to the steps and under the bridge wasn’t going to work. To get to the apex on the opposite side I’d have to walk almost as far as he had to run and, by then, he’d be long gone. Luckily the traffic wasn’t too heavy and, with a little trepidation, I managed to cross the road.

This left me with some waiting time but I filled it with more practice shots over the opposite side of the bridge. This time my subjects were the football stadium, Peartree Green, the distant buildings of the city centre and a speedboat passing under the bridge. They all came out far better than expected. Slowly I was beginning to realise a little of the potential of this new camera. 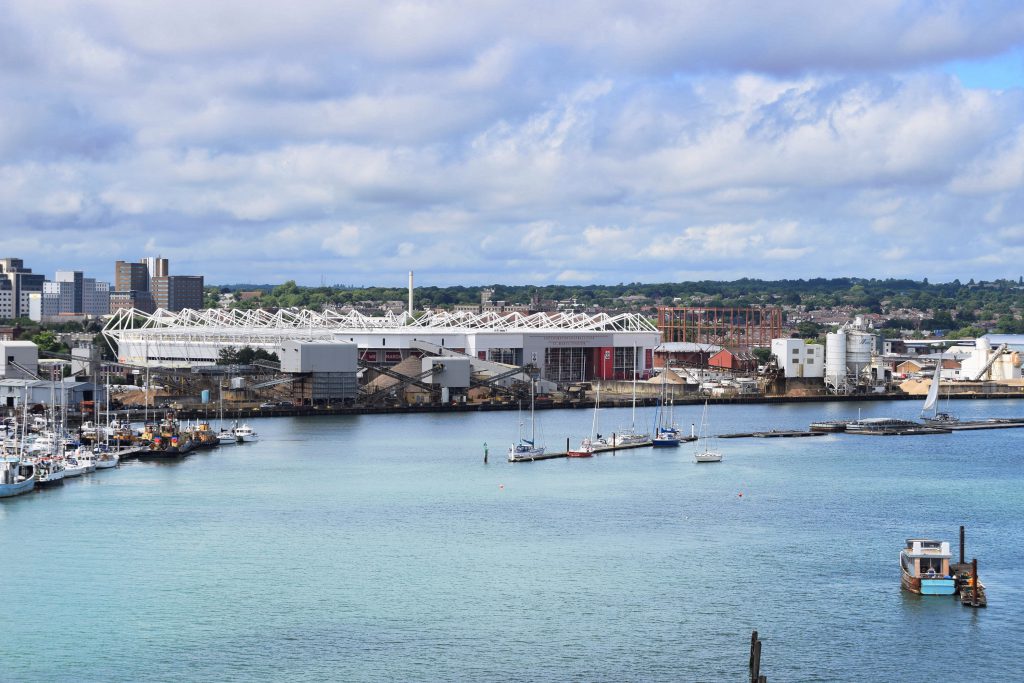 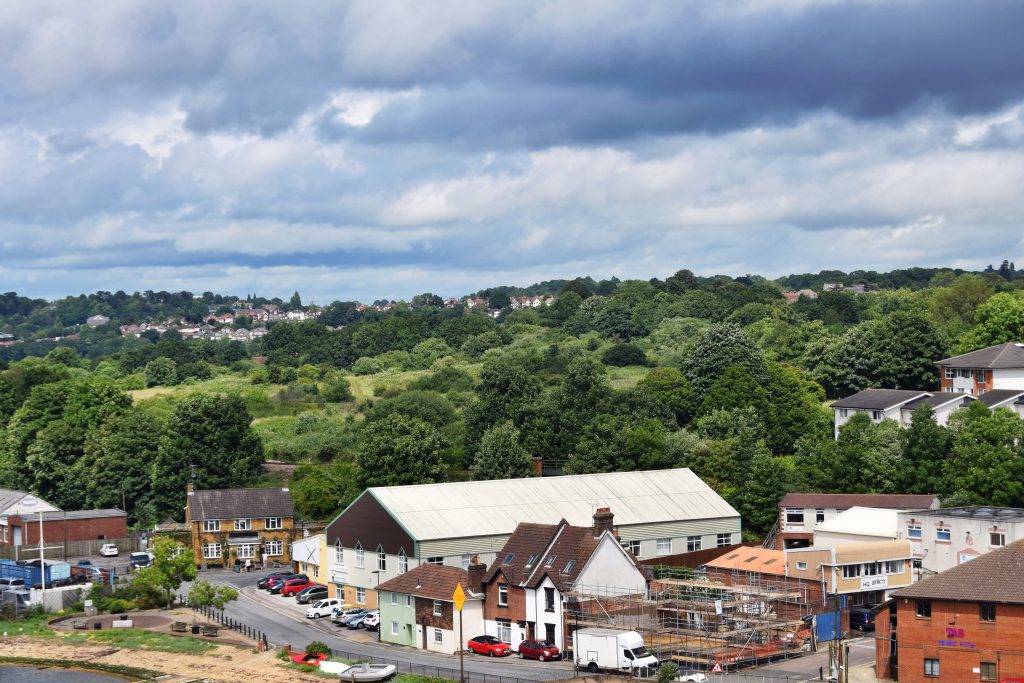 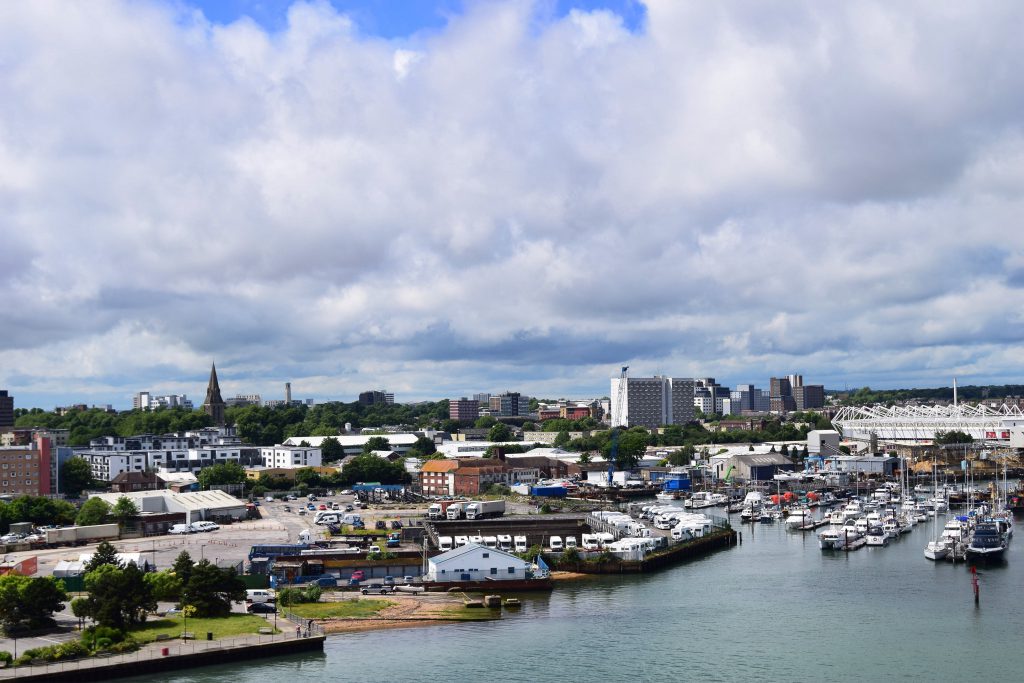 When Commando came back he still looked comfortable, if a little hot. In fact, as he passed me I could see sweat running down his face and his eyes were screwed up because it was running into them. Maybe he needs a John McEnroe style towelling headband? 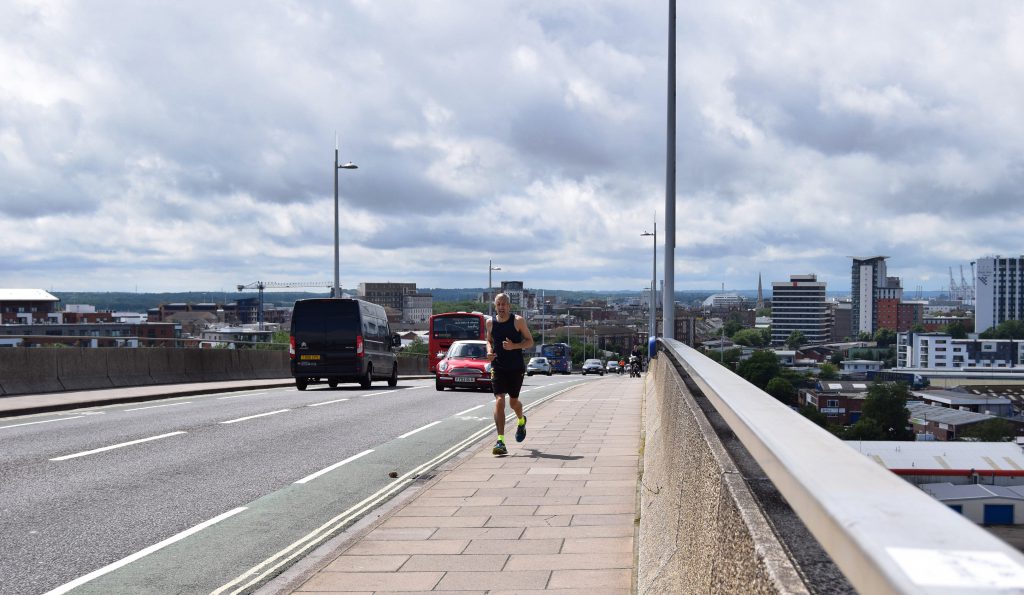 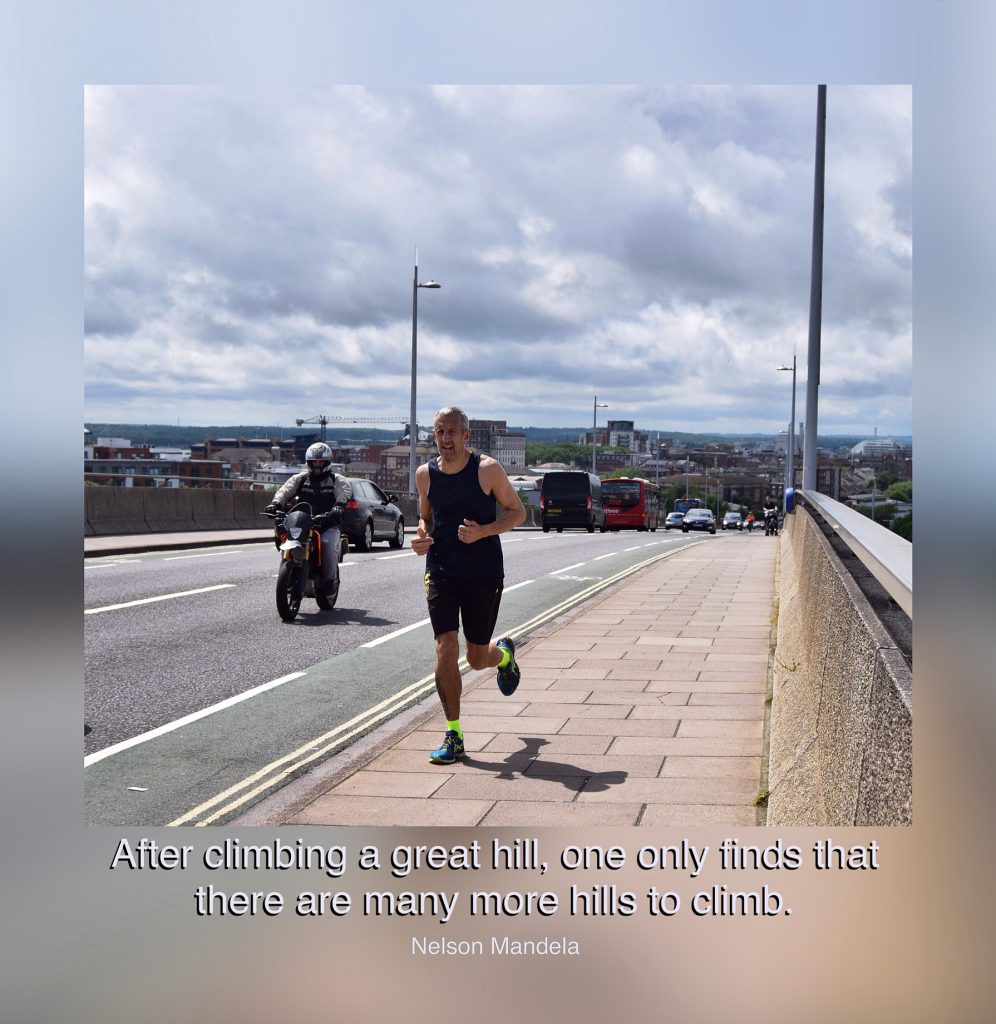 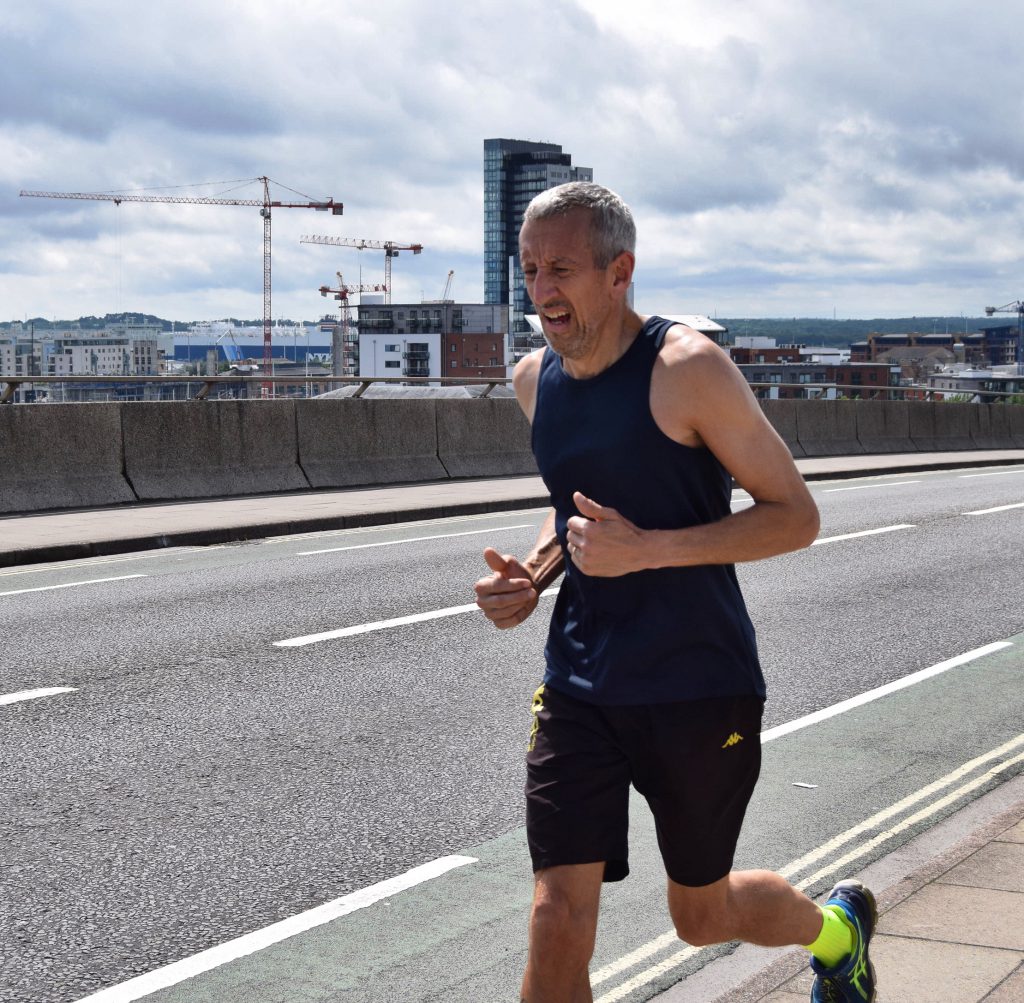 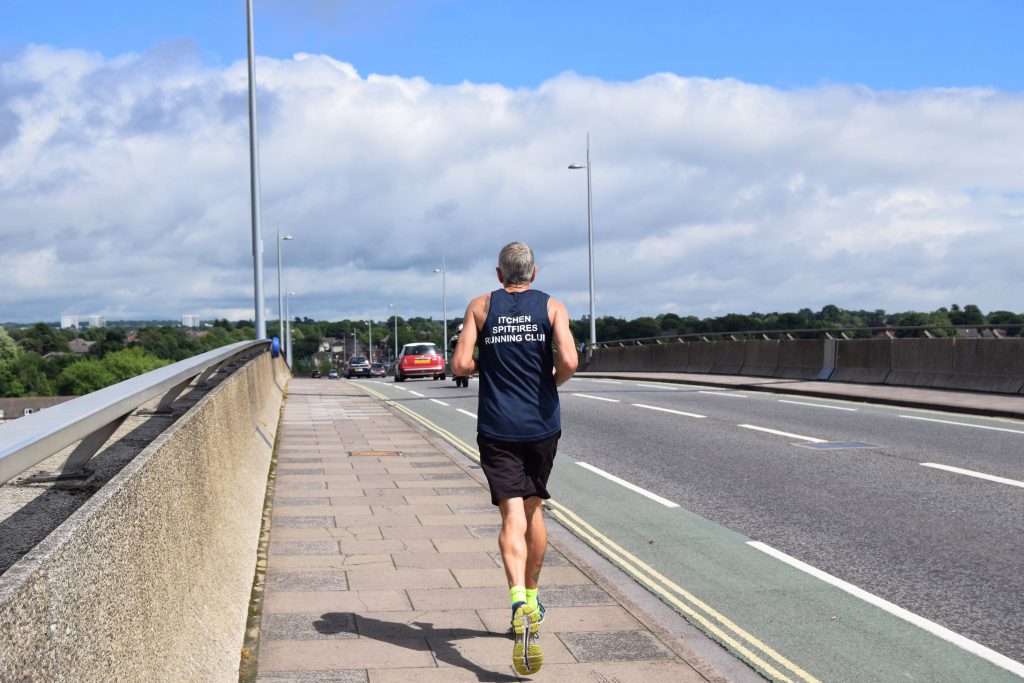 Once he’d disappeared again I crossed back to the Woolston side of the bridge to wait for his next appearance. This time, as he passed he held up two fingers. Did he mean two more laps? I wasn’t sure. Hadn’t he said six laps when he started out? Did that mean six times over the bridge and back or three times over and three times back? 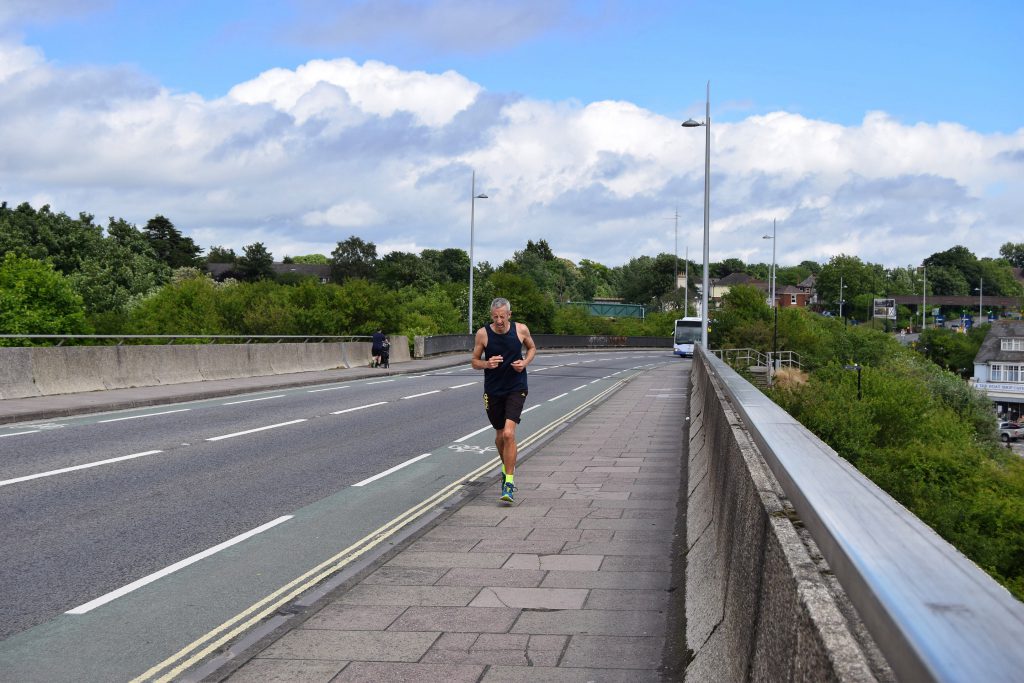 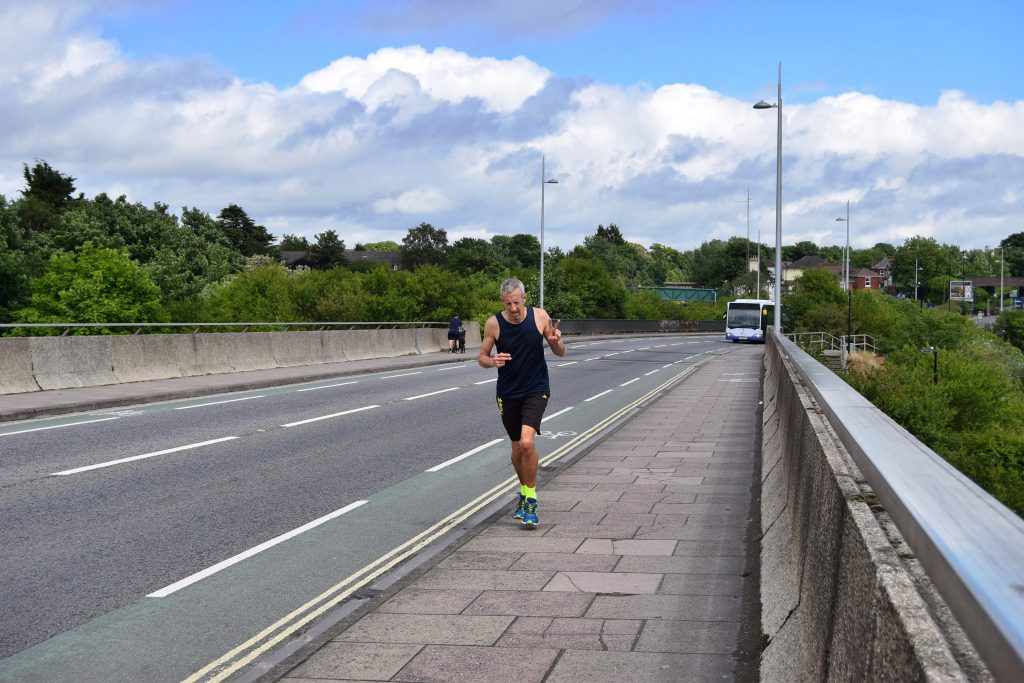 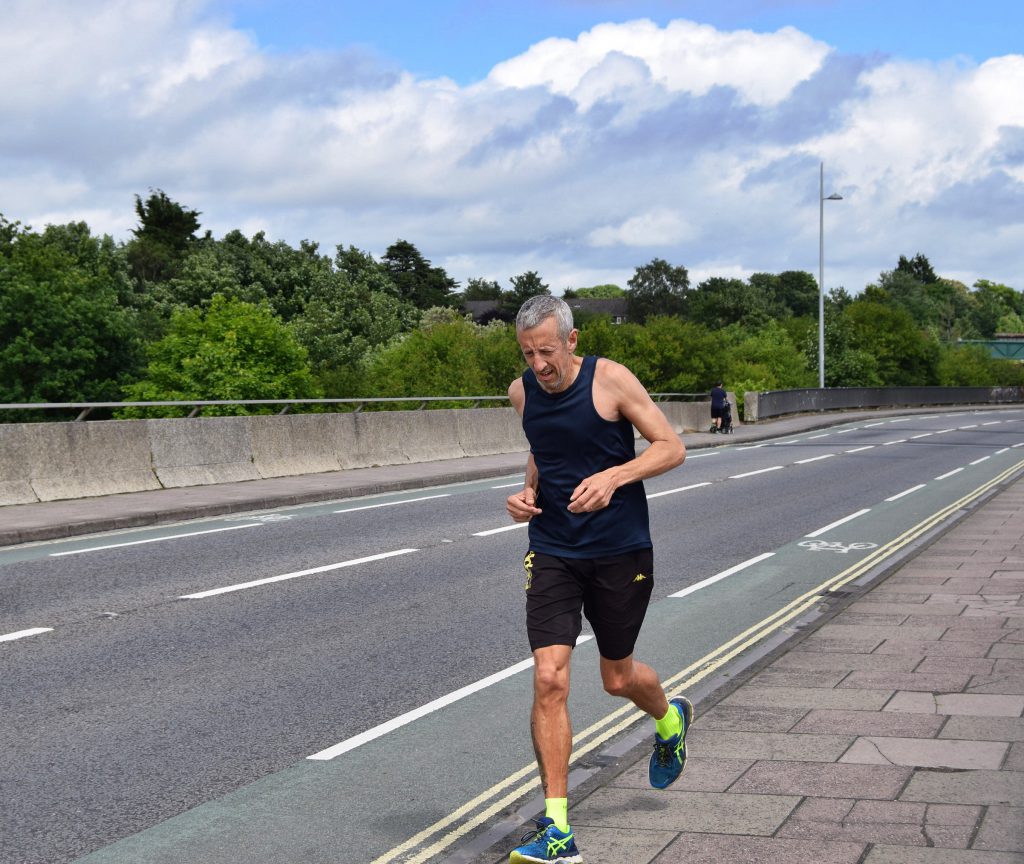 Either way I needed to be back on the other side of the bridge before he came back so, once again, I crossed the road.  Then I thought it might be good to have some photos of him on the steps to the bridge as a contrast to all that running back and forth so I walked back to the steps. When I got to the bottom I realised these steps wouldn’t make for good pictures. They turn at a sharp angle and double back on themselves, unlike the straight, but steeper steps on the other side of the road. If I’d thought of that before I could have saved myself all that road crossing.

In the end I walked under the bridge, took a few pictures of the underside and then climbed back up to wait at the top of the steep, straight steps. This sounds a whole lot easier than it actually was. The heat was oppressive and it felt as if i was breathing water it was so humid. How Commando was running at all was a mystery, never mind running up these never ending steps. 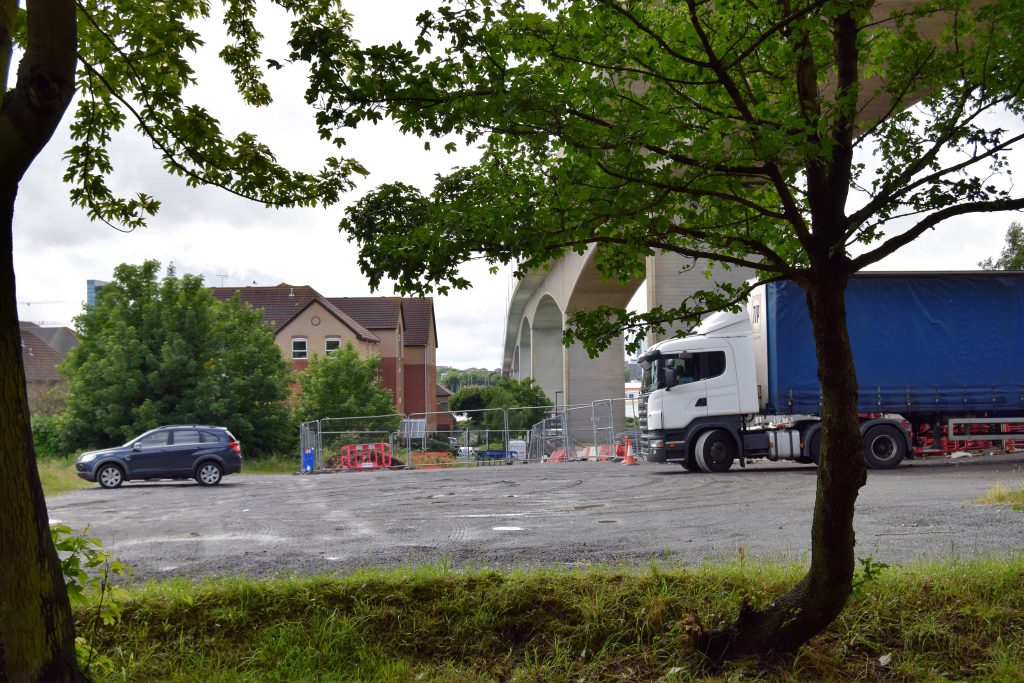 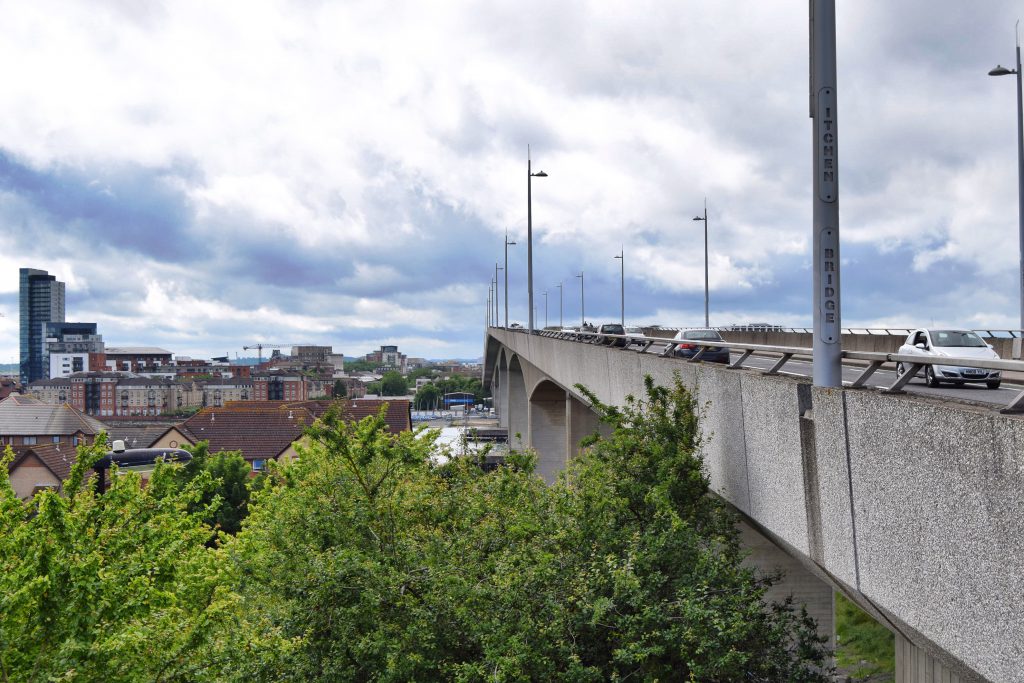 Eventually I made it to the top. Surprisingly, the picture I took of the feather sculpture came out well. By this time I was so hot and exhausted I could hardly see straight. 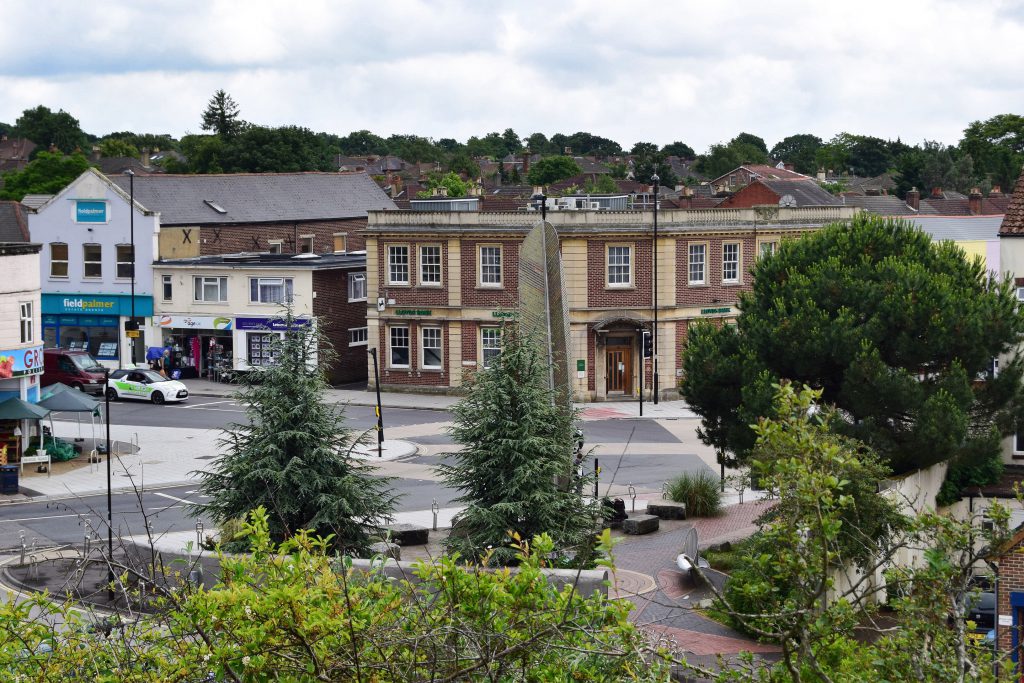 Soon enough Commando appeared again. I snapped away as he ran towards the steps where I’d been a few minutes before. Then he gestured that he’d meet me at the bottom. This was when I worked out that six times across the bridge meant three times one way and three times the other. I’d climbed all those steps for nothing! There was hardly room for complaint seeing as Commando had just done all that running and I couldn’t really ask him to run up the steps one more time just so I could take pictures so I slowly walked back down. 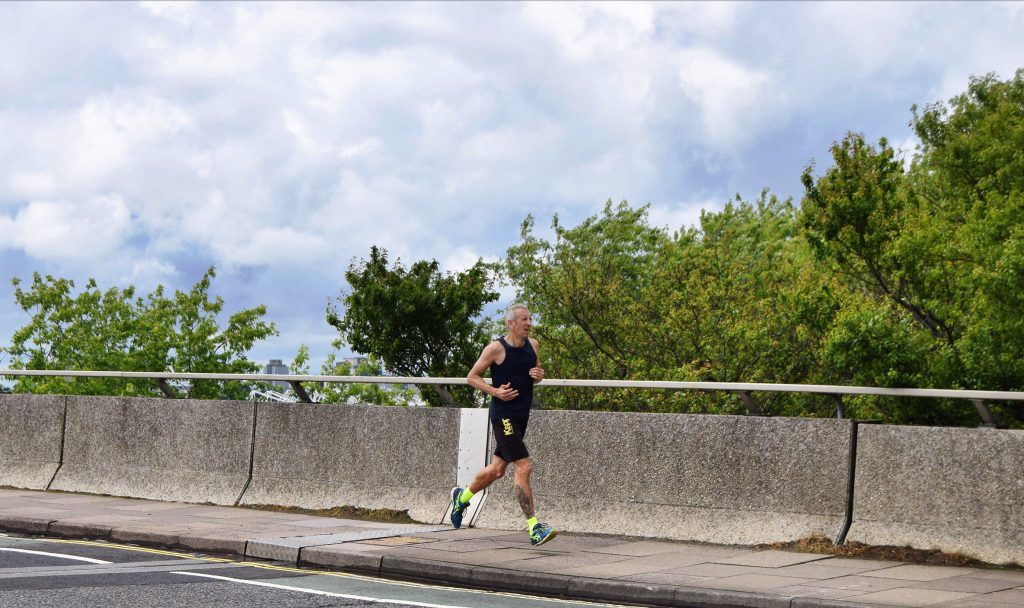 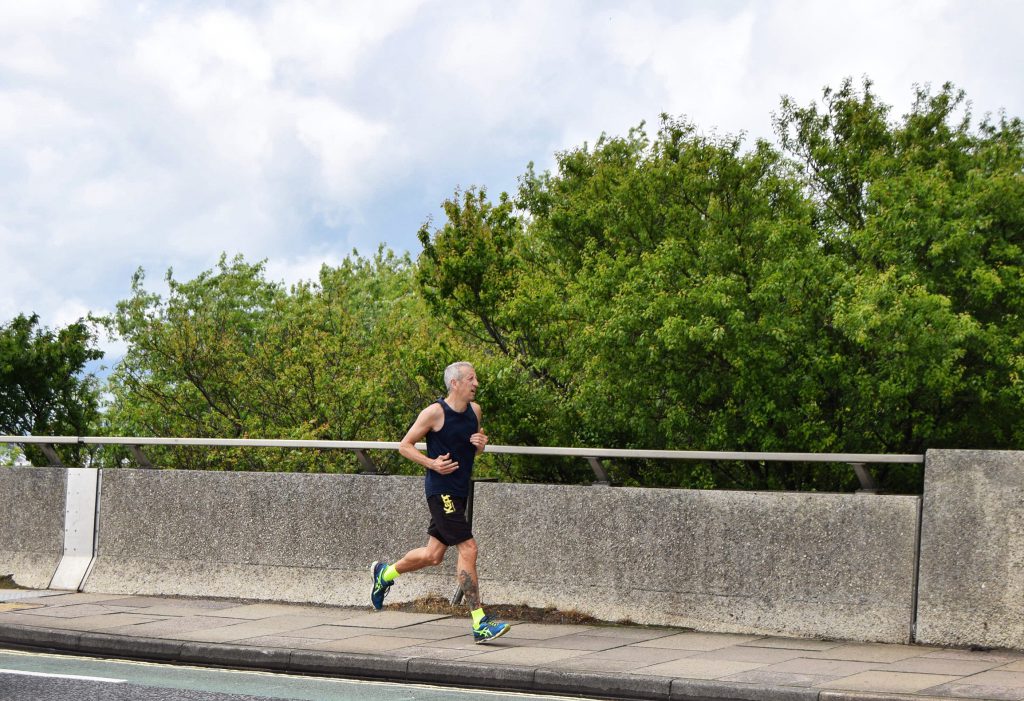 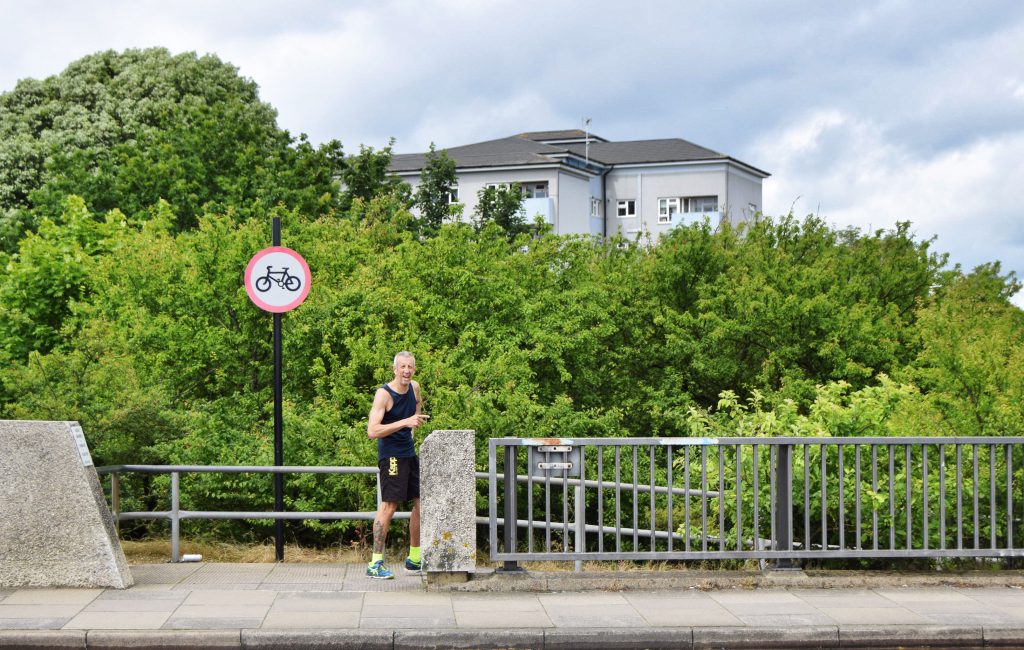 When I got home and downloaded all the photos I discovered two important things. One is that the sport mode on the camera really does a great job of capturing people running. Almost all the pictures I took of Commando running across the bridge were in focus and better than anything I’d ever have got with the iPhone. The second was that sport mode results in hundreds of pictures to go through. It took an awful long time to decide which ones to keep and which to delete.