Some days start off grumpy and grouchy and 4 December 2013 was one of those. It began with an early start because Mr Haughty was due in the office for a handover meeting. The bus journey started off the bad mood and, from then on things went steadily downhill.

I’d rather have walked to work this morning but I had to get in extra early to prepare for Mr Haughty so I got the bus. This started me feeling all grumbly. When I got on the bus there was one single seat near the front facing backwards. Some people don’t like sitting backwards which was probably why the seat was empty but I don’t mind. It must be all those years travelling to work on trains where any seat is a miracle. The only problem was a surly looking woman had her bag and her feet on this seat and didn’t want to move.

“Excuse me please,” I said, being very polite although I didn’t feel it.
She scowled and grudgingly moved her bag and her feet. The bag went on her lap but her feet didn’t actually move off the seat, that would have been far too much of an inconvenience. Instead she moved them to the side a little, leaving me just enough room to perch on the very edge. She then proceeded to shut her eyes and ignore me which is when I took a photo. Actually I took more than one but I feel a bit bad about showing you her face so I won’t.

Opposite there was a woman with a pushchair in the wheelchair bay. Two stops before I had to get off another woman with a pushchair got on. She had three small children with her and a baby in the pushchair, which was a very wide wheeled affair. Too wide to fit in the remainder of the pushchair bay. This didn’t deter her, she just left most of it blocking the aisle. The bus driver did ask her to move it but she wasn’t English and didn’t appear to understand him. Consequently, when I had to get off the bus I had to clamber over her. She didn’t try to move, not even a little bit. When my boys were little you had to fold the blasted pushchair up and carry it onto the bus with a baby under one arm but at least you didn’t get in everyone’s way. I really hate getting the bus.

Today Mr Haughty was in the office for the handover. I’d created a system map, a whole handover manual with how to do everything and bits of useful information. Somehow I expected to be involved in the actual handover but it turns out I wasn’t. He was holed up on the mezzanine most of the day with Arabella and Sue trying to sort out contracting problems. Feeling a touch surplus to requirements I spent the day sorting out a few problems of my own.

Howard was checking the flight manifest for tomorrow’s cruise.
“I thought Peter was on this one?” He said, scratching his head.
“He is,” I told him.
“Well he doesn’t have any flights…”
Oh poo, how did that happen? Peter is the band leader, he’s been on hundreds of cruises, I couldn’t believe he hadn’t checked his documents and, if he had, he’d have noticed something like a lack of flight details. Alice would have noticed too when she prepared the documents, she always checks everything.
I rang Peter.
“Hi Peter. All ready for tomorrow?”
“Yes, just packing now.”
“Did you check your documents?”
“Of course I did. Why, is there a problem?”
“Um, possibly,” I didn’t want to alarm him. “What were the flight details?”
There was a rustling of paper then he read out his flight number and the time.
Once I’d reassured him and got him off the phone I searched my emails to see what I’d sent over for booking and when. Sure enought it was all there present and correct. There was even a very clear explanation about the flights because Peter is on four cruises back to back and I wanted to make sure they got it right. Meanwhile Howard was doing some checking of his own. Turns out there was a flight, right up until November 6, when someone cancelled it. Quite how they expected the band leader to get out to Barbados with out the aid of a plane I’m not sure. Thankfully Howard somehow managed to wangle him onto the flight. Whew!

I don’t even want to think about what’s going to happen when there’s no one to check these things. Still, it will be someone else’s problem. Actually it will be Mr Haughty’s problem and I feel quite sorry for him because he won’t have Howard and Alice to back him up.

The rest of the morning was mostly about clearing things out. We have shredding sacks and I spent a great deal of time filling one up this morning. Then there was a delivery, two huge boxes, one with my name and one with Arabella’s. These were Harrods hampers, sent by SWANK, the on board movie people, for us. We had some last year but, as I’d only just started I felt a bit embarrassed to accept mine. This year is different, I’ve built up a great relationship with Erica, the lady in America who provides the films, and I’m feeling kind of sad that this will be my last present from America.

Straight away I sent her an email thanking her and telling her about the office closure, I included a photo of some funny snowmen I took last winter and wished her a happy Christmas too. I’ve been putting off telling people until I have to because it’s so upsetting when they email back or phone. Just after lunch my phone rang, it was the lovely Erica from SWANK. She’d received my email and was calling to say how sad she was that we wouldn’t be working together any more. We had a little chat and, once again I was close to tears.

Mr Haughty did come and speak to me before he left. He picked up all the stuff I’d printed off for him and apologised. That was something I didn’t expect.
“I’m sorry I couldn’t keep you on,” he said, actually looking genuinely sorry, “I really fought for you but the CEO wouldn’t change his mind.”
Still, look on the bright side, I’ll have plenty of time for walking when I’m unemployed.

The rest of the afternoon was spent building up a portfolio. I printed off copies of some of the complex spread sheets I’ve created, budget plans, schedules, emails from people thanking me for sorting out problems. Tomorrow I have an interview with the University and I’m taking it all with me. When they ask me what I can do I’ll be able to show them.

To make up for the grumpy, emotional day the sunset tonight was astonishing in its beauty. It started off gently, with some icy looking mare’s tail clouds turning slowly orange. As it progressed the orange ball of the sun came through the clouds, deepening and sinking into the tree line. Slowly the sun disappeared behind the trees and the orange turned to red painting the clouds with smudged strokes. As the light show faded the red deepened further still before the fire finally went out. 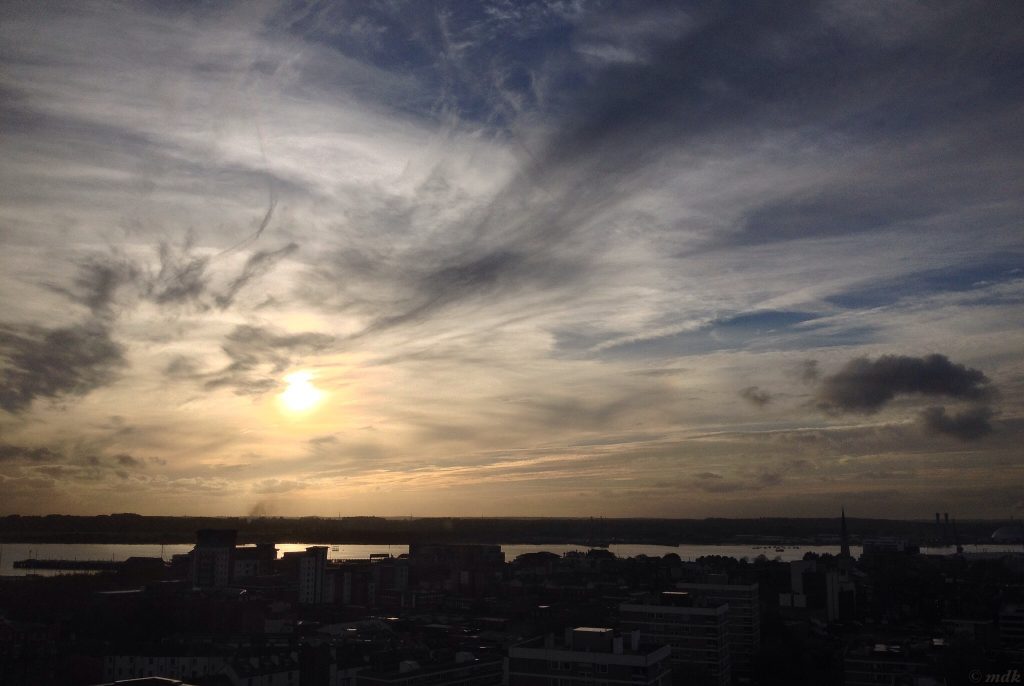 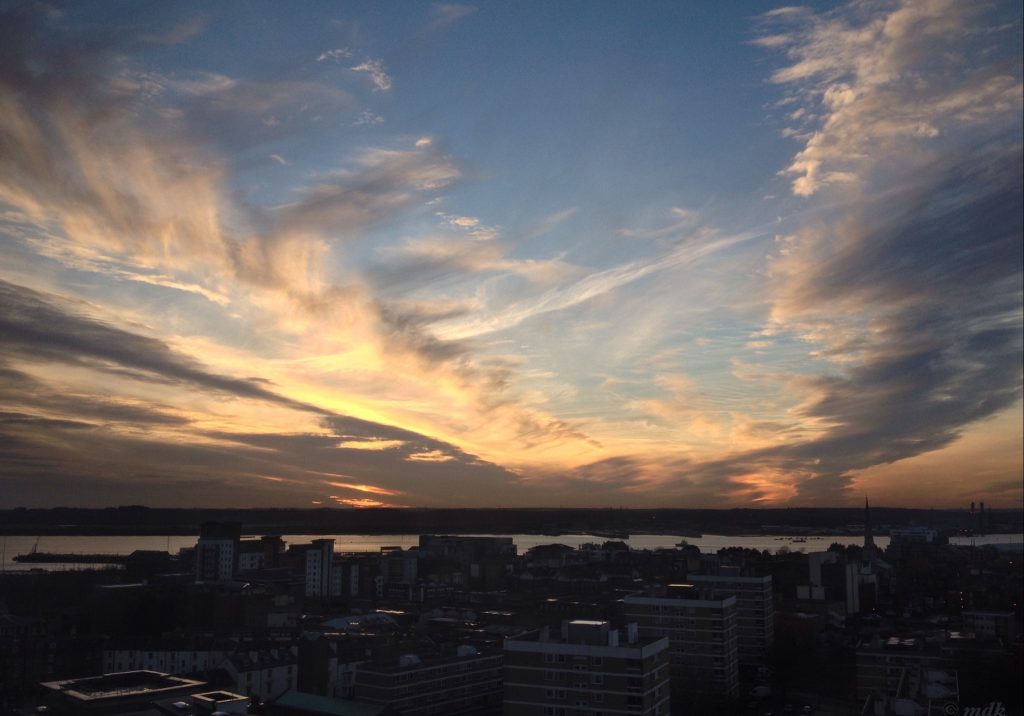 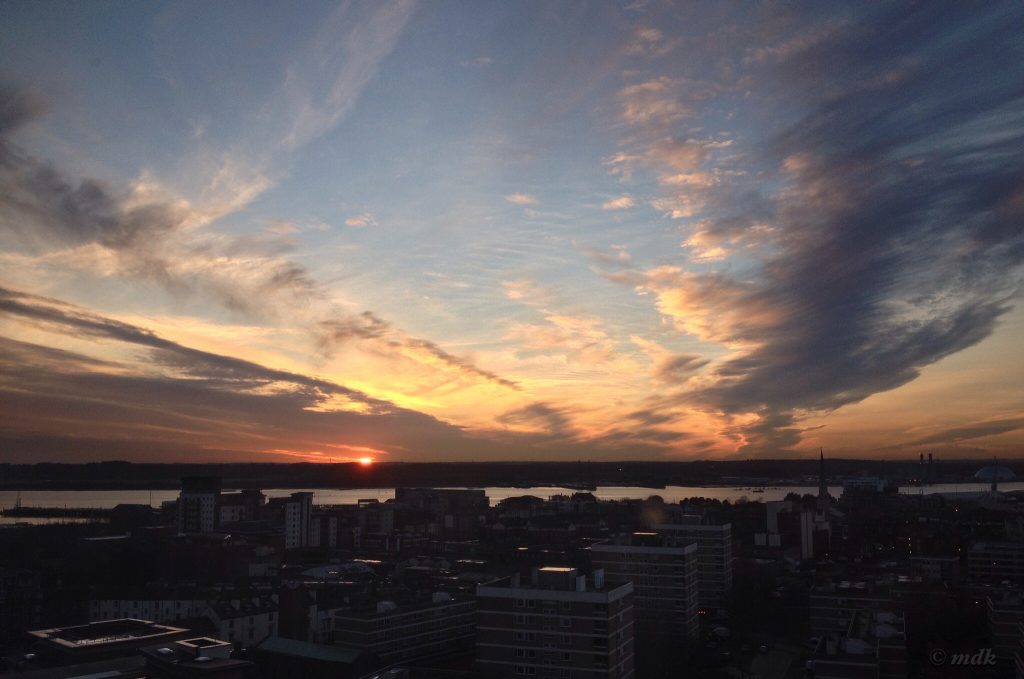 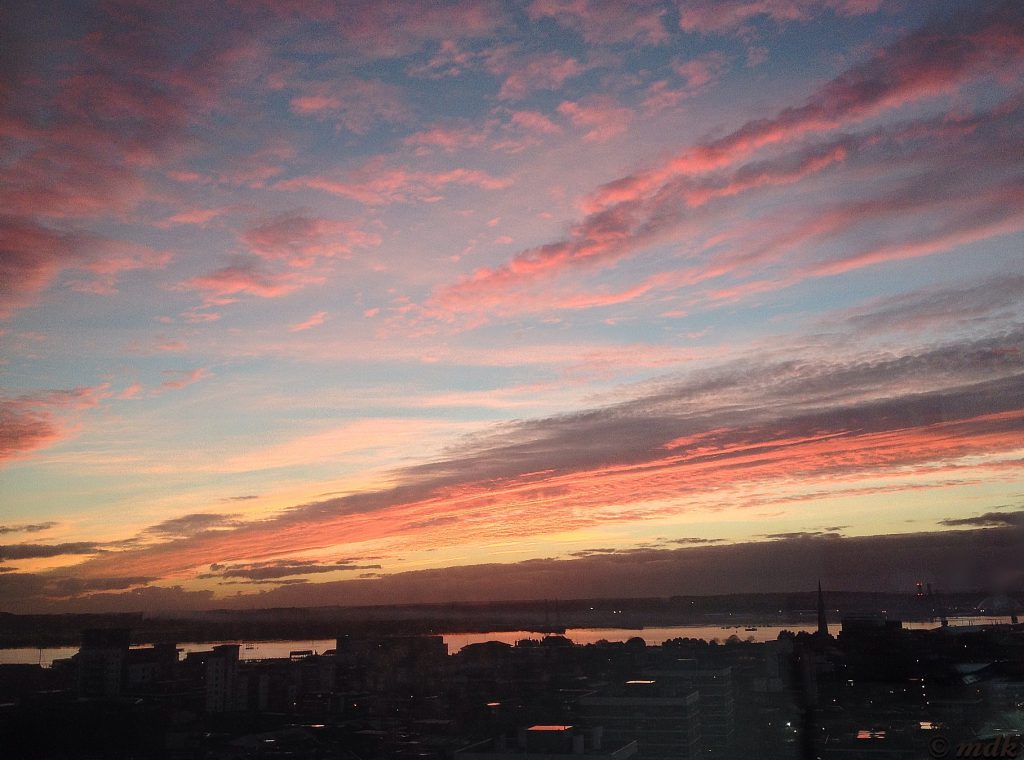 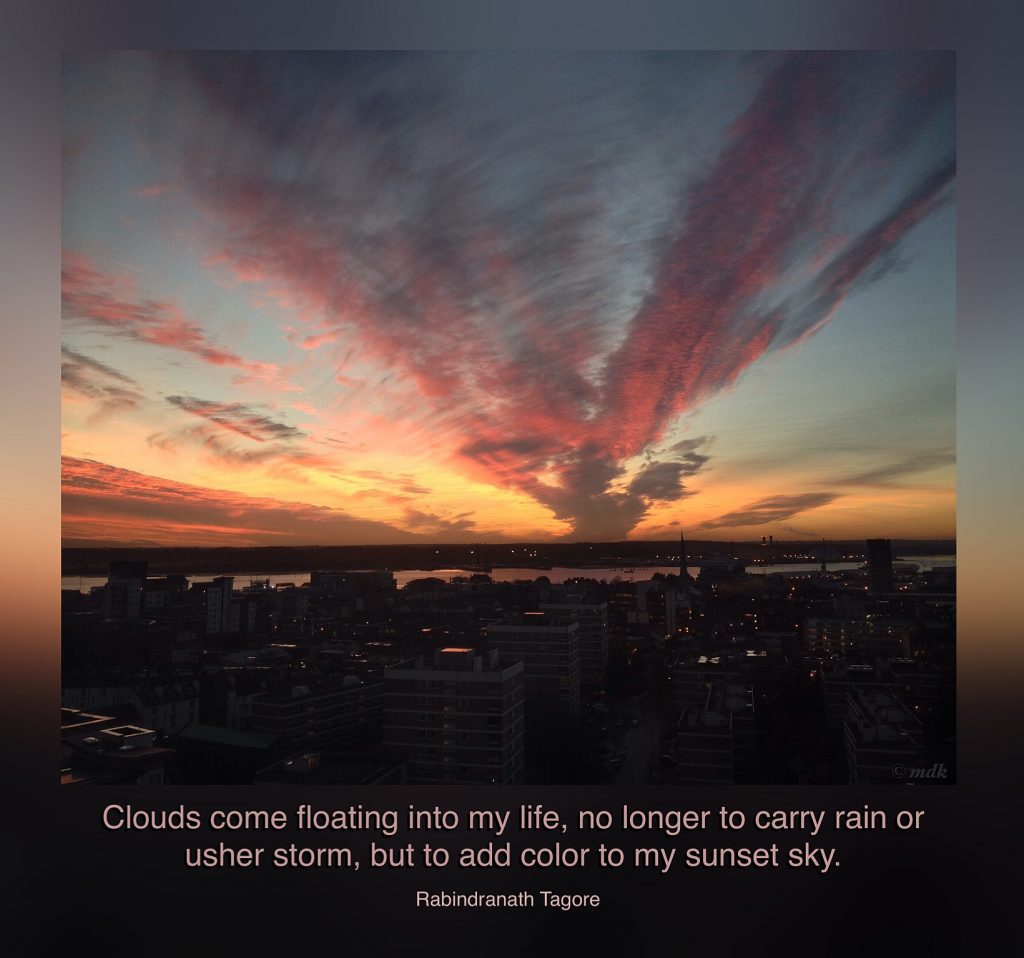 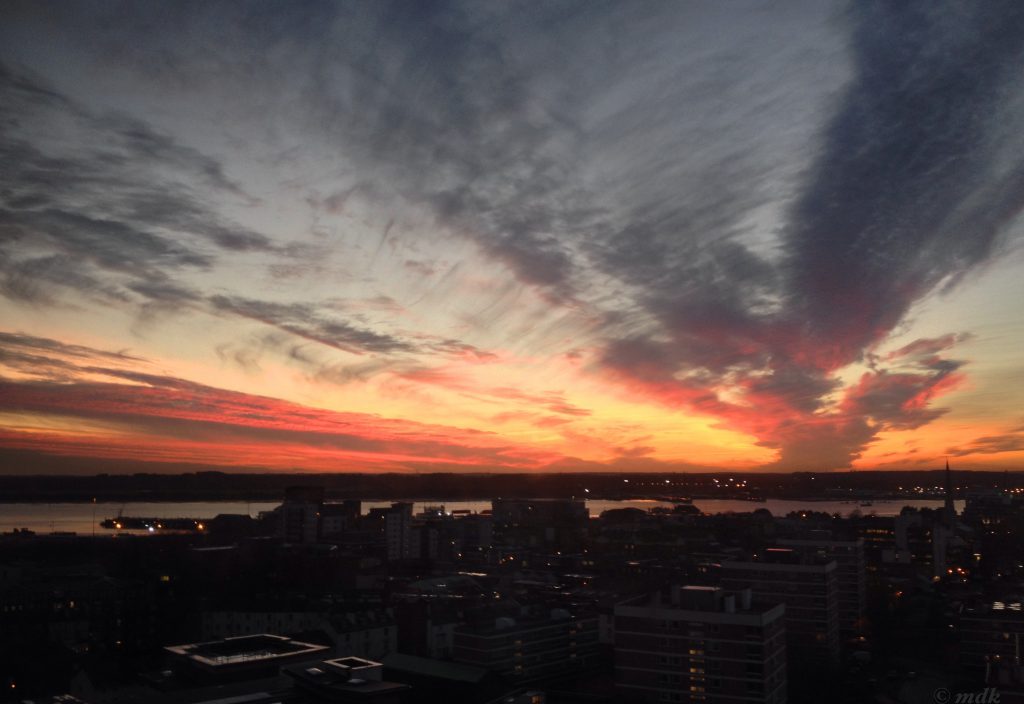 So now I’m off to do a bit more interview preparation, getting out my interview suit, doing my nails and reading up on interview technique. Wish me luck.