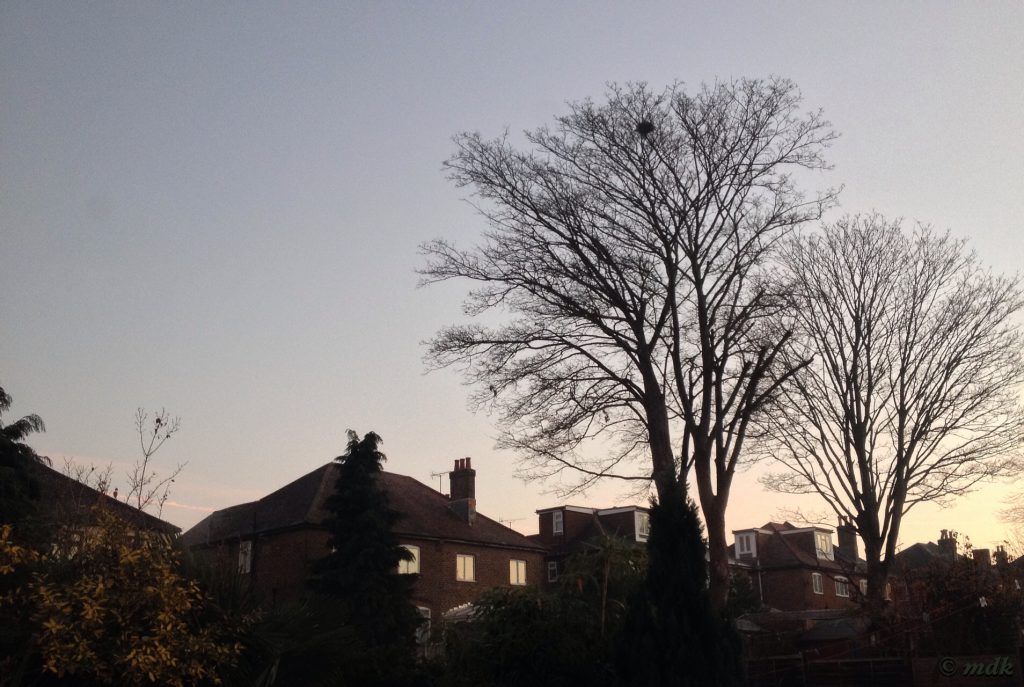 One of the hardest things about losing my job at Silver Helm was walking away from the wonderful views over the city from our office on the fourteenth floor. In the penultimate week a foggy day brought some of the most breathtaking yet. They were all the more poignant because I knew they were going to be some of the last.

The first thing Commando said to me this morning was “watch out on the decking, it looks fine but it’s a sheet of ice.” Apparently he slipped on the step coming in. Once it was light enough to see outside the ice on the decking rail was obvious but, other than that, it seemed to have the makings of a nice day. Apart from the merest hint of streaky cloud behind the houses the sky looked clear, my knee felt more or less normal and I cursed the fact that it would be the bus for me as I had an early start. 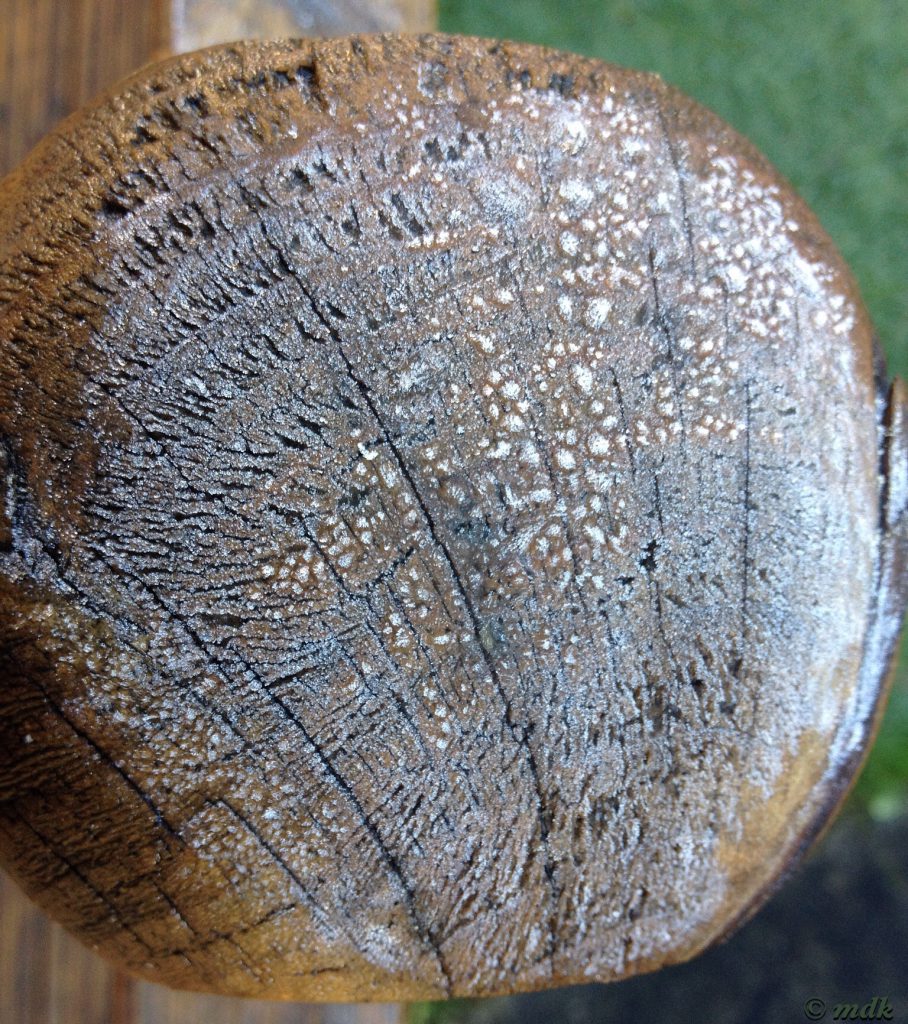 I decided to give the decking a miss and took the almost unprecedented step of using the front door. For some reason, known only to Commando, we hardly ever use the front door. It’s the same at Commando Seniors house. The Commando family appear to have something against front doors, don’t ask me why. Outside it was bitterly cold but I did stop to take a few pictures of the icy plants. The leaves of the choisya were ringed with thick white ice crystals as if it had been dipped in icing sugar and I spotted the most perfect fairy cobweb between the branches of the holly. If my fingers hadn’t been freezing, I’d probably have spent far longer snapping away. 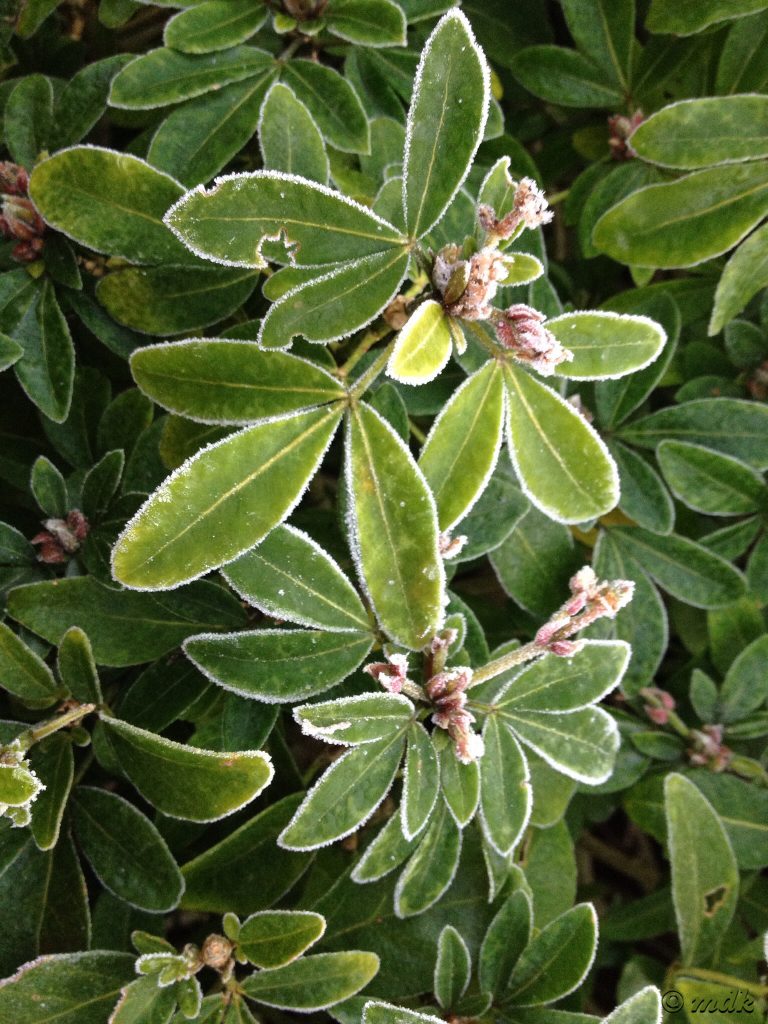 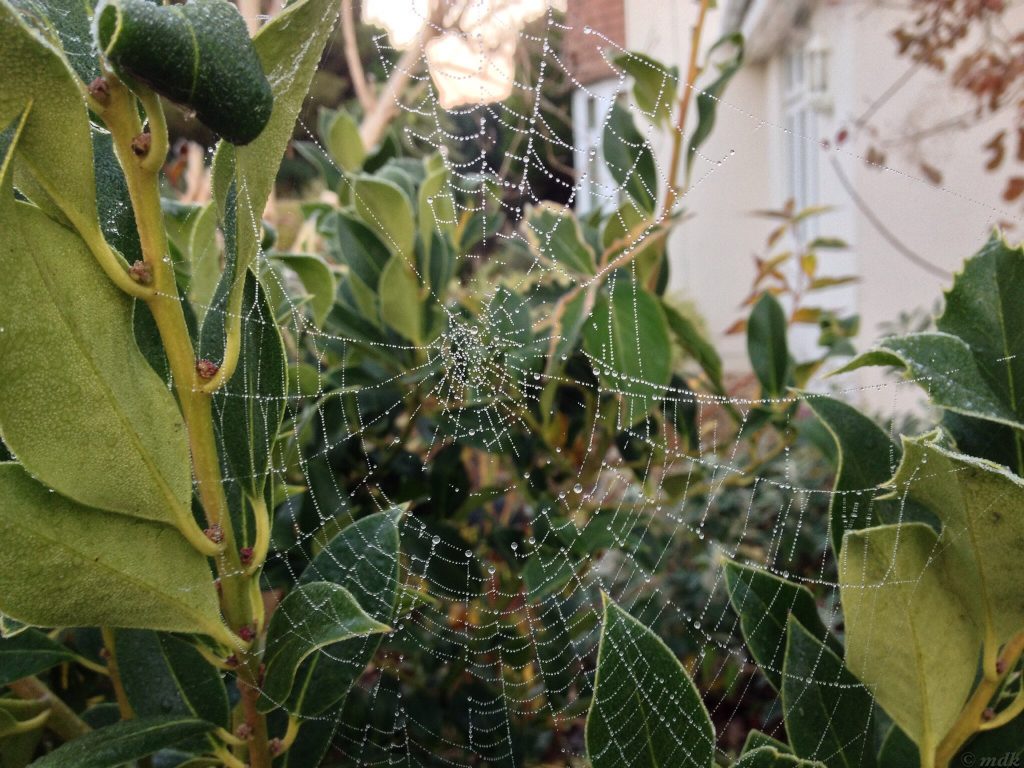 When I got to the bus stop I had a bit of a shock. Looking up the road the world was bright and the sky clear, looking down the road there was no world to see, just a heavy blanket of fog. Suddenly the bus didn’t seem like such a bad idea. Then, as the traffic crawled across the Big Bridge I cursed my luck again. The sun, trying in vain to break through the fog, was a huge orange ball reflected in the misty water. The best photo opportunity ever and all I could do was look through the window and wish I was outside.

Passing St Mary’s Church the spire was shrouded by freezing fog and, around the corner, the orange ball hung just above the buildings a surreal sight but not anywhere near as picturesque as it had been over the water. Instead of going straight inside the warm office I walked around the block to see if I could get a better view but the tall buildings were in the way. 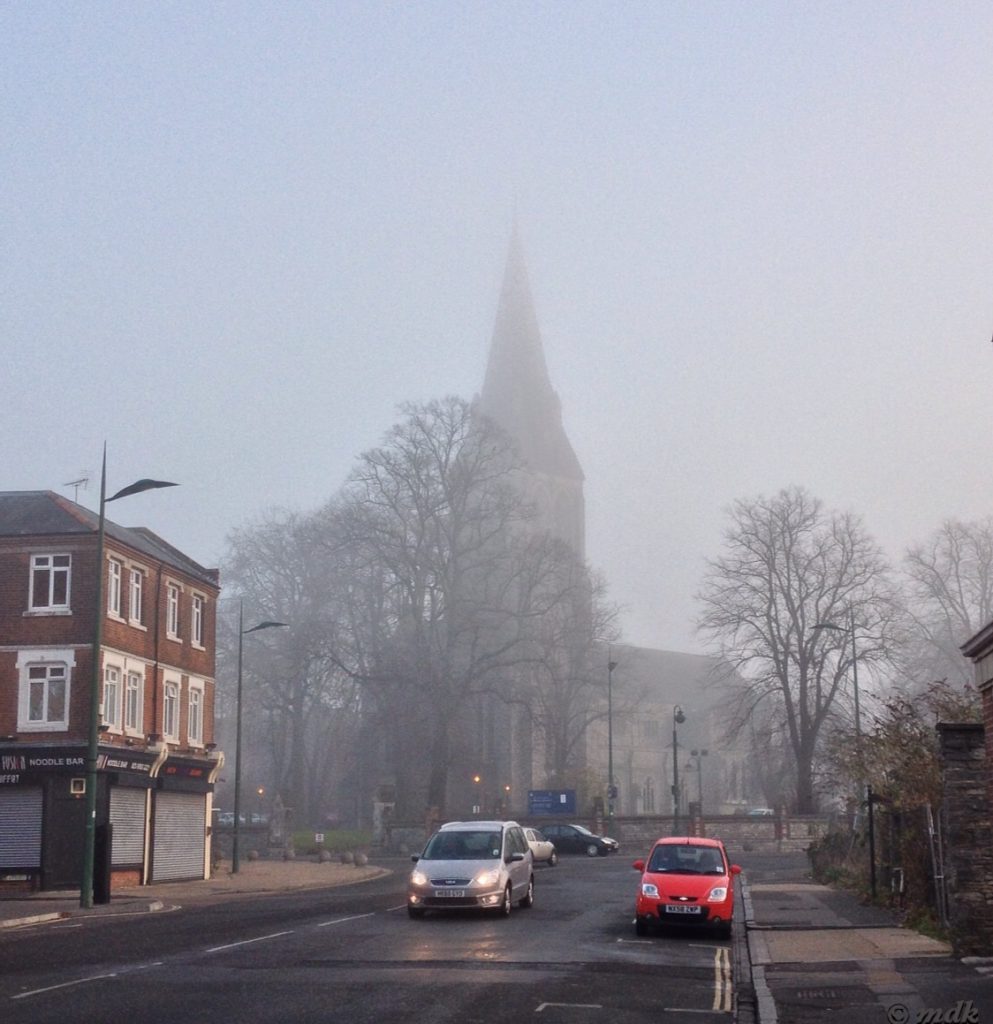 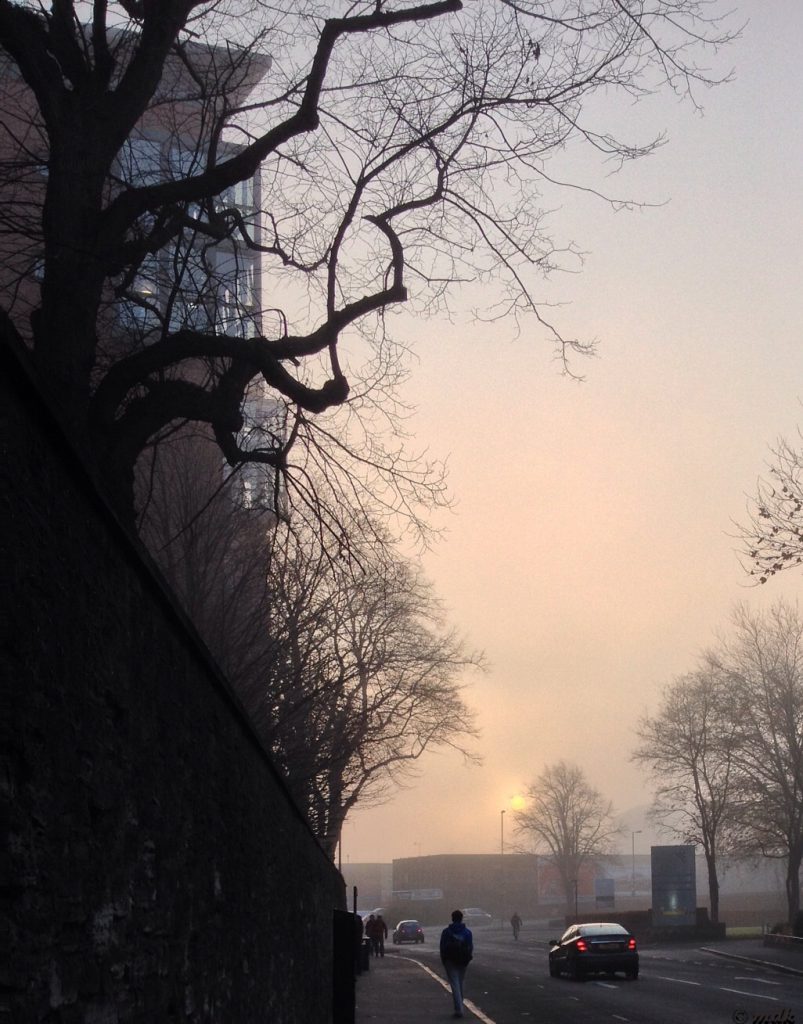 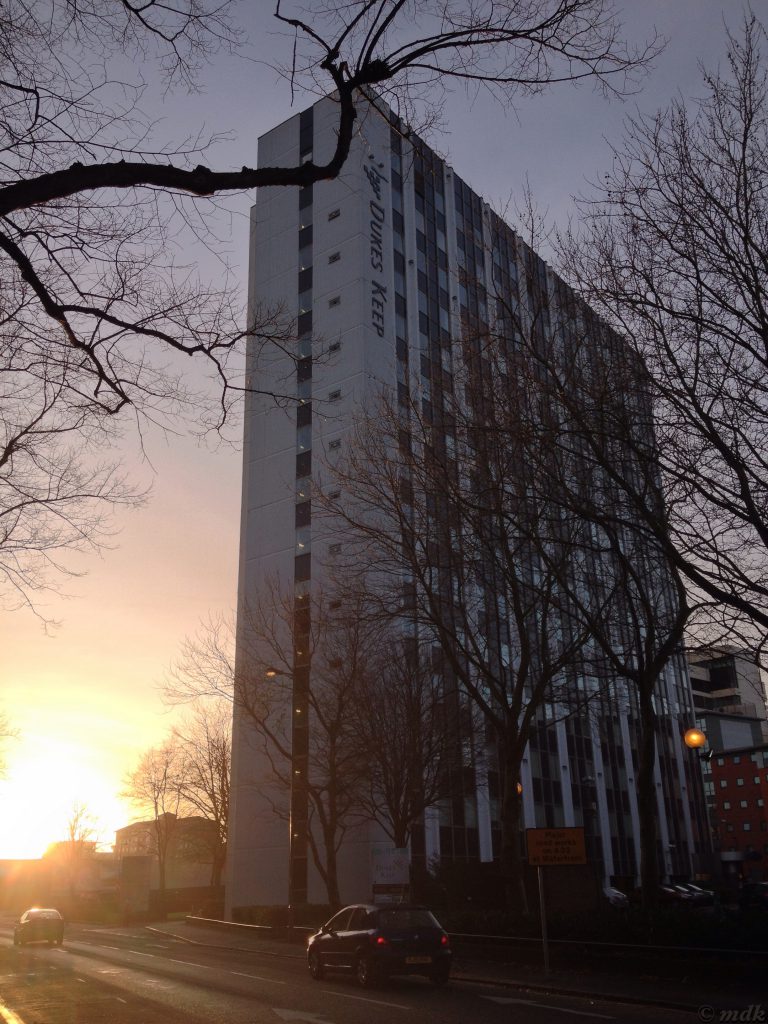 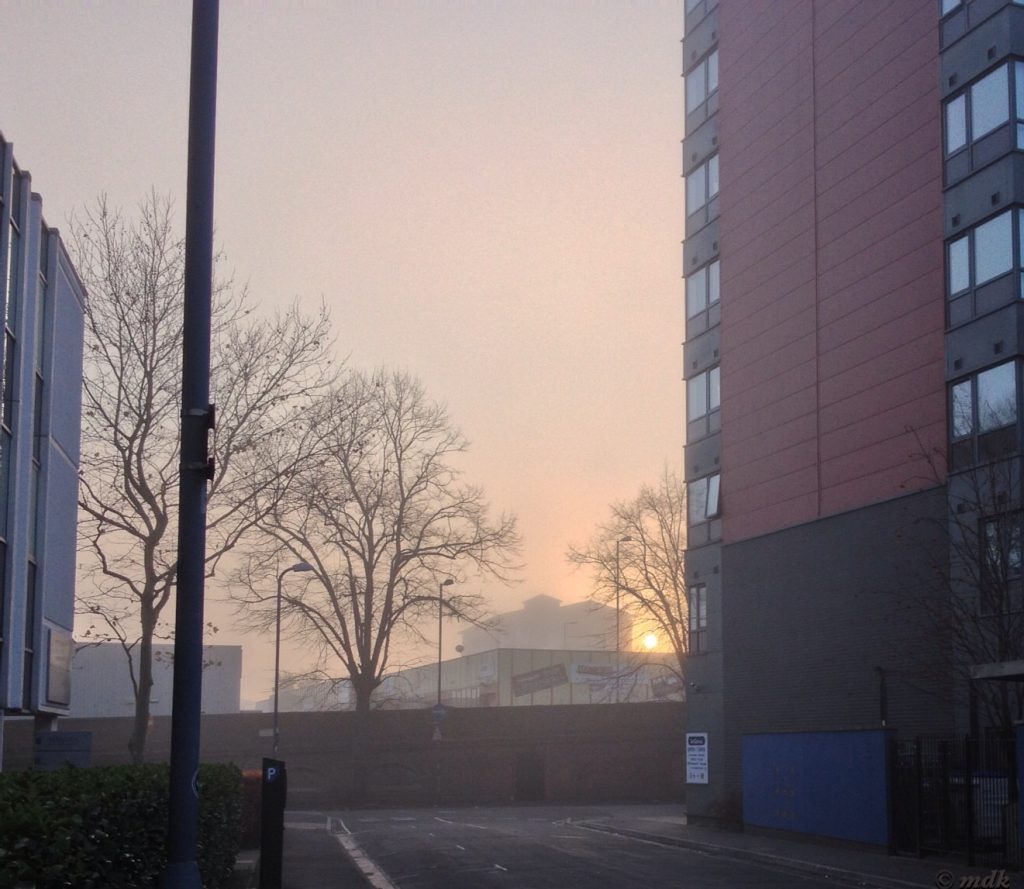 Up on the fourteenth floor there was a better view but the city seemed to have disappeared altogether apart from a disembodied crane rising from the fog. Even later, when the sun had burnt off the worst of it and the buildings below were bathed in sun, the river was still invisible, the tops of a few cranes and towers floating on cloud. Work was still going on on the demolition site but everything beyond the edge of the park was lost in the haze. It felt like we were on an island floating in the sky. 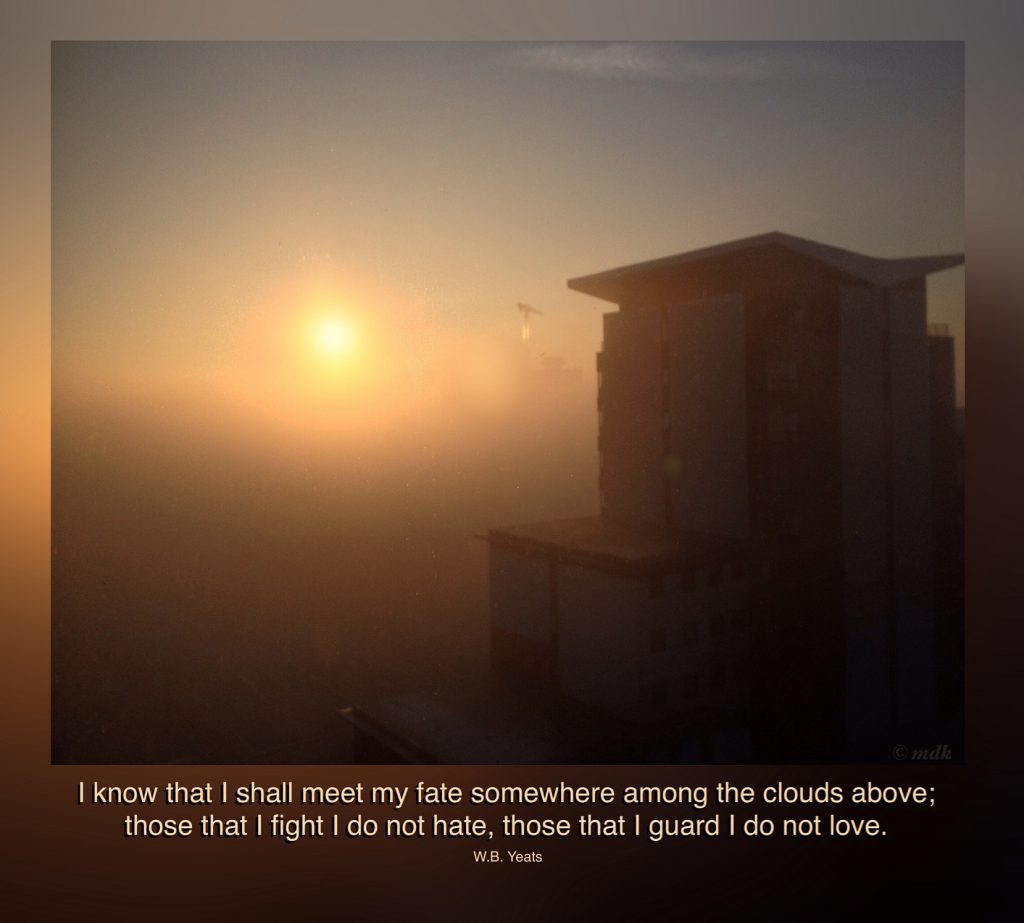 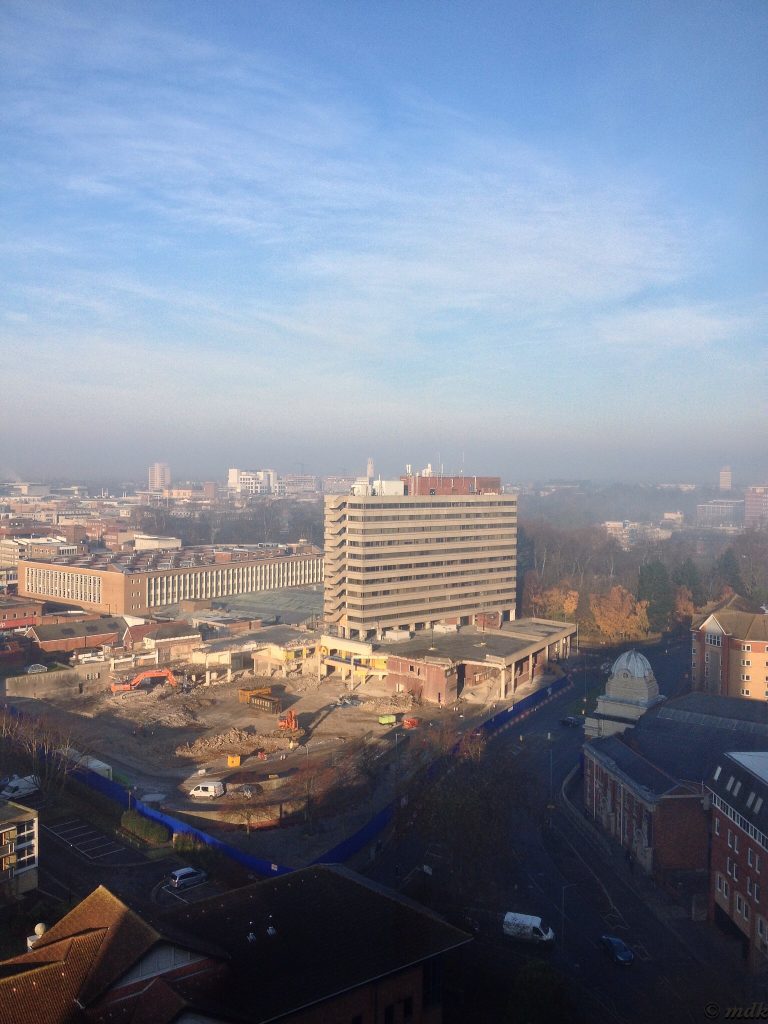 Inside, Noel and I were alone, adding to the feeling of isolation. Everyone else was stuck in the fog sitting in cars waiting to move. Eventually, after half past ten, Sue arrived then Arabella. There were tales of swirling fog on the motorway, accidents, people driving like idiots. If I had to drive to work I think I’d have stayed at home.

Not much got achieved. In all honesty, apart from packing things up, there isn’t much left to do. Arabella and I did attempt a conference call with Mr Haughty but he was in a meeting. In the frozen north all anyone seems to do is have meetings. They have meetings about when to have meetings and I have no idea when they find the time to do any work. Maybe that’s why everything seems to take them so long and so many things go wrong.

Today was the day of our office Christmas lunch, even though we were pretty thin on the ground. Alice and Rose are in the frozen north for the rest of the week, Noel had a prior engagement, Anika was stuck with the itineraries so that left Arabella, Sue and I. Gigi joined us which was lovely, and Ellie, who works from home on the cruise books, and Tino, who has gone on maternity leave, came in specially. What a contrast to last year when there seemed to be hoards of us. Still we had a lovely lunch in Pizza Express where they do the skinny, leggera pizzas. If ever there was a good idea that is one of the best, an ultra thin crust pizza with a hole in the middle, like a donut, filled with salad. Mmmm.

The rest of the day disappeared at the speed of light, possibly due to the extra hour for lunch, and, before I knew it, the sun was setting outside the window. The orange ball was back, this time slowly sinking into a still hazy tree line. Beautiful. Waiting for the lift I looked out at the city lights, a fiery sky and the centrepiece, another cruise ship, lit up like a Christmas tree, at the end of the street. Down in the foyer an actual Christmas Tree has appeared, as of by magic. I would never tire of these views in a hundred years but, sadly, there are just days to go now so each look outside has a poignancy. Will there ever be another job with so many photo opportunities? 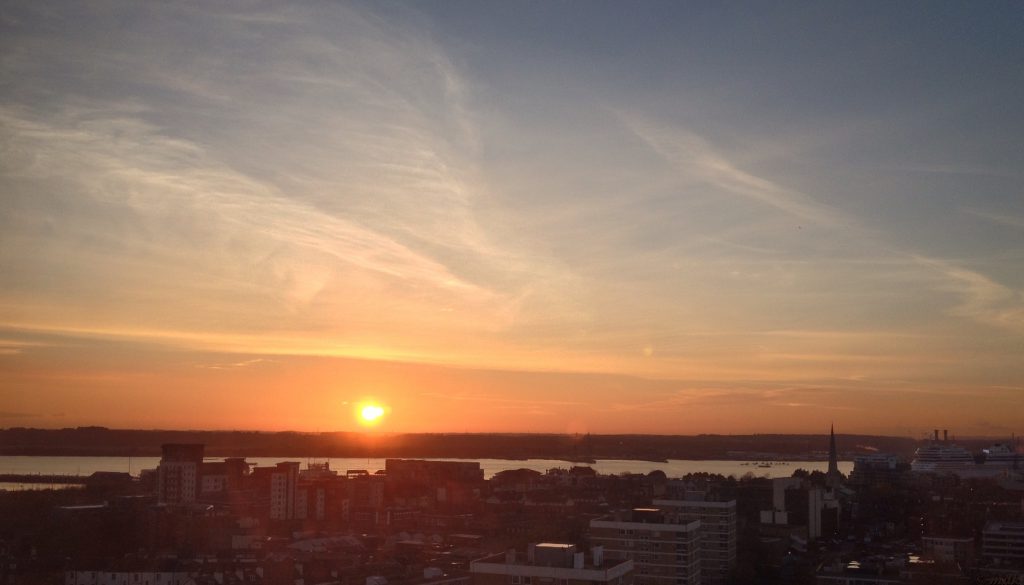 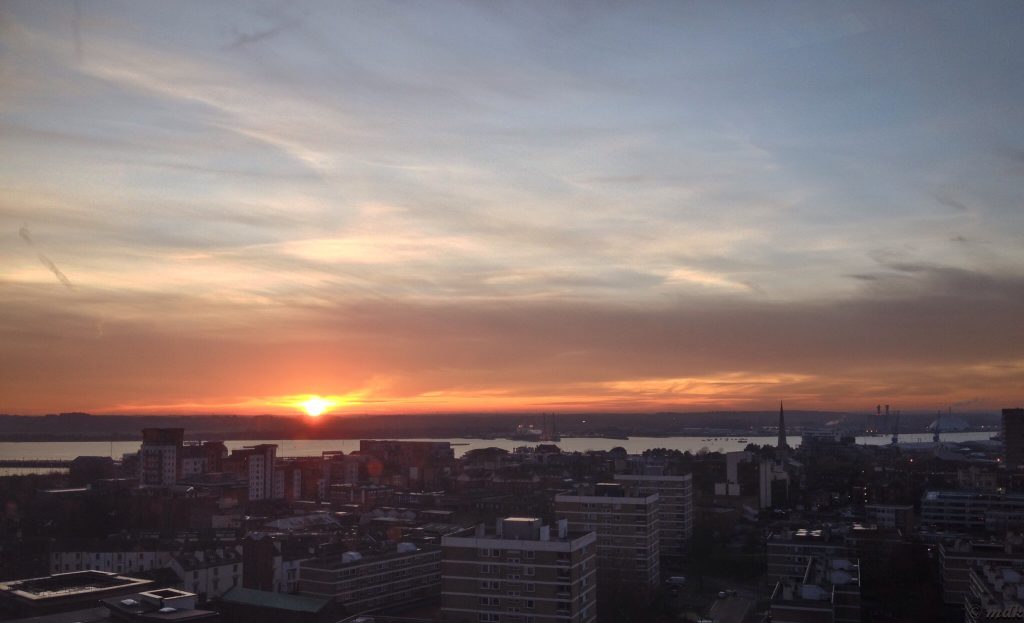 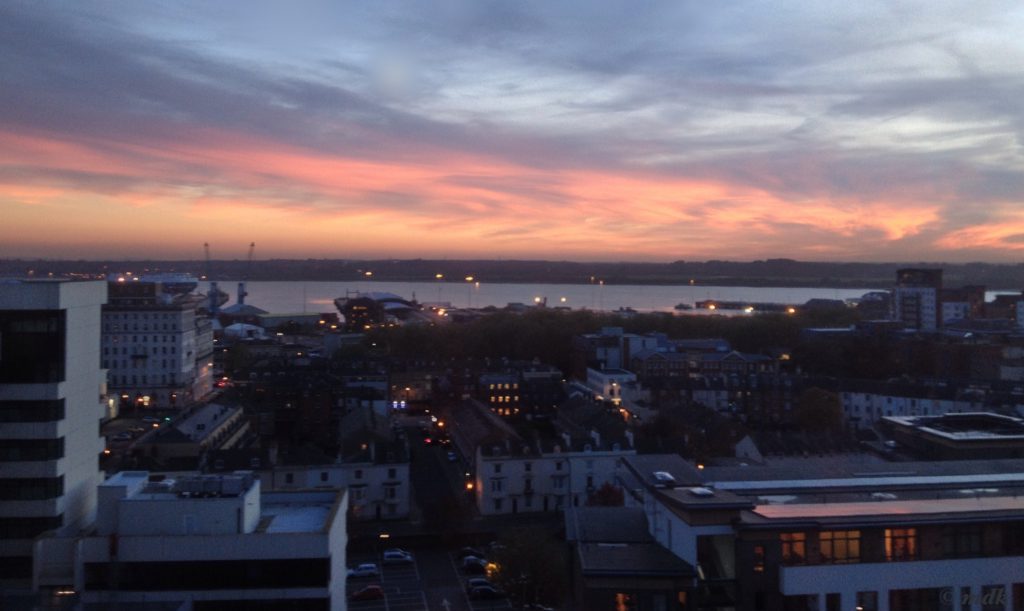 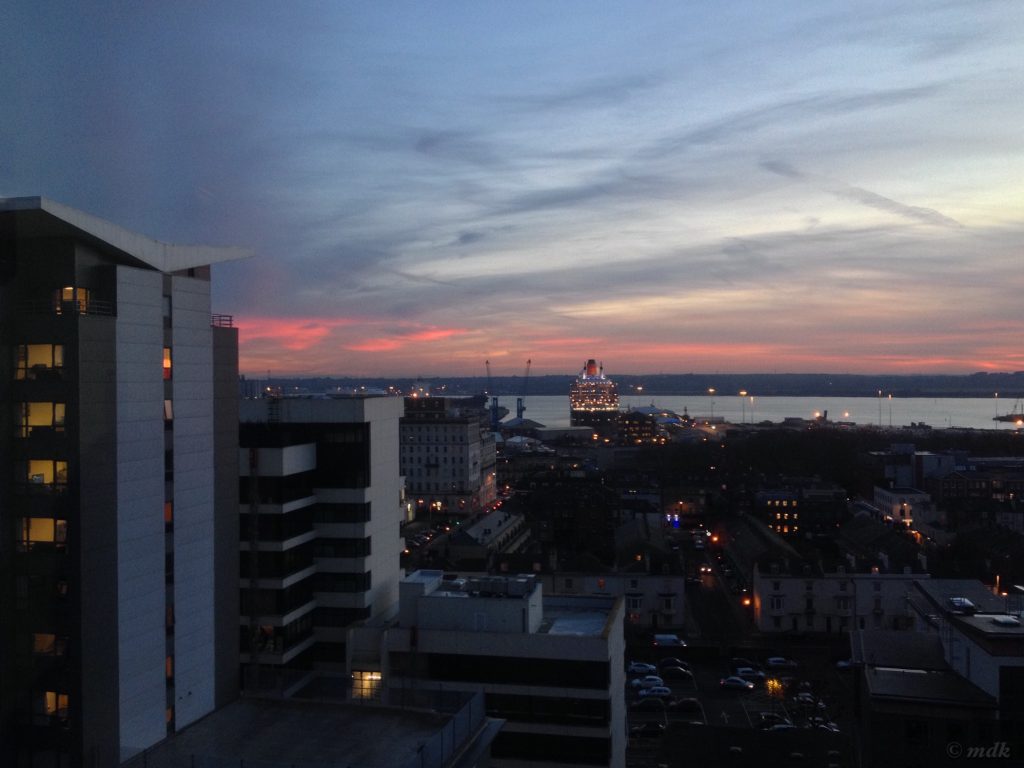 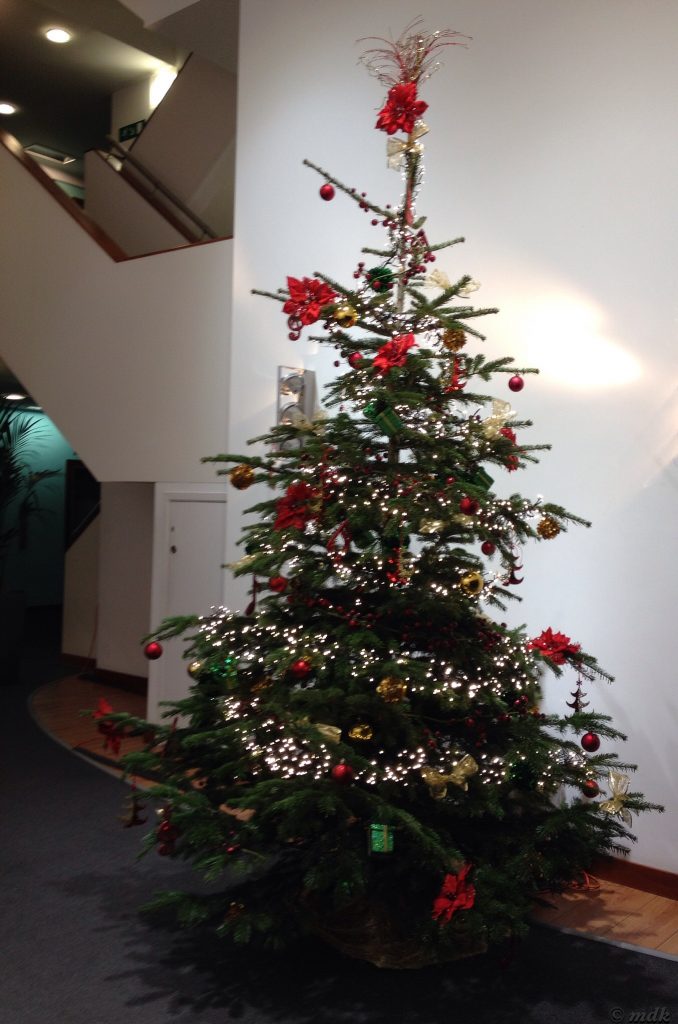