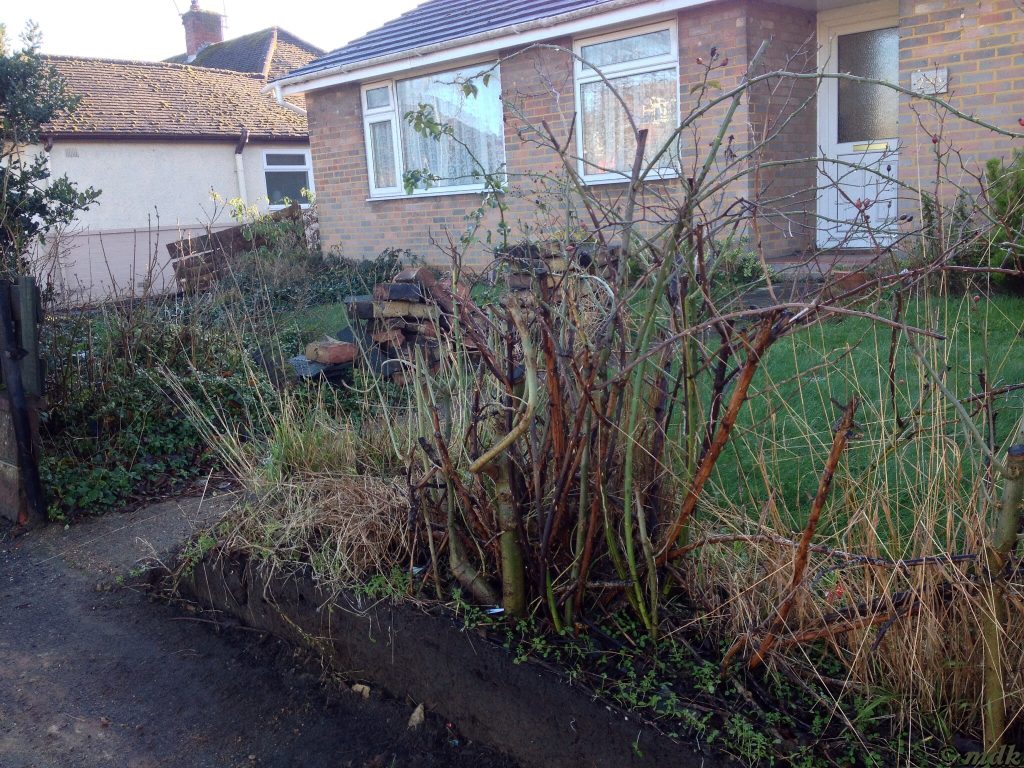 Boxing day 2013, the sun was out, Commando was out on a run, it seemed like a good time to go for a little walk. Apart from anything it might walk off some of the Christmas food I ate before it had a chance to settle on my hips. At first I thought about trying out a new route but the river was calling and my feet were listening even if my head said try something new.

Not long after I left the house on my Boxing Day walk I saw the first evidence of the recent gales. On the Main Road several fences and a wall were down. It seems we had a lucky escape, probably because of our sheltered position in the dip between two hills. When I reached Monks Walk the muddy, puddle filled path told me my river walk wasn’t going to be all plain sailing. Maybe the hiking shoes with their slightly spiky soles would have been a better choice than the boots I was wearing but it was too late to turn back. As I marched through the quiet streets towards the river, the roads were empty and I was hoping the park would be too, I like a nice quiet walk on my own. 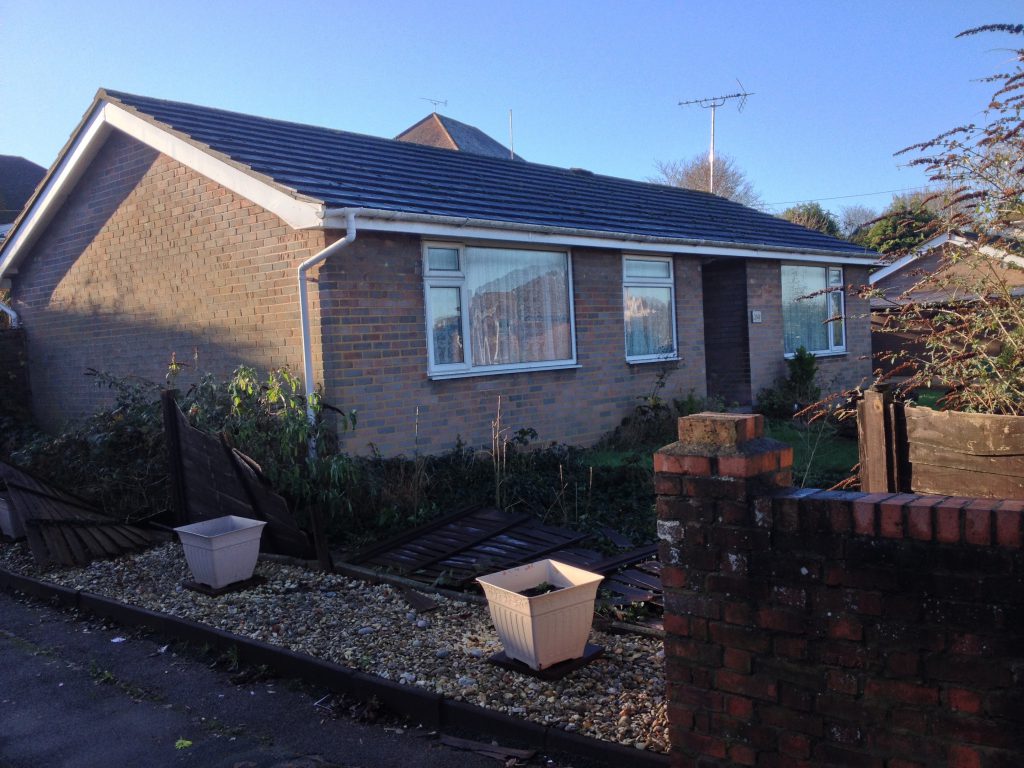 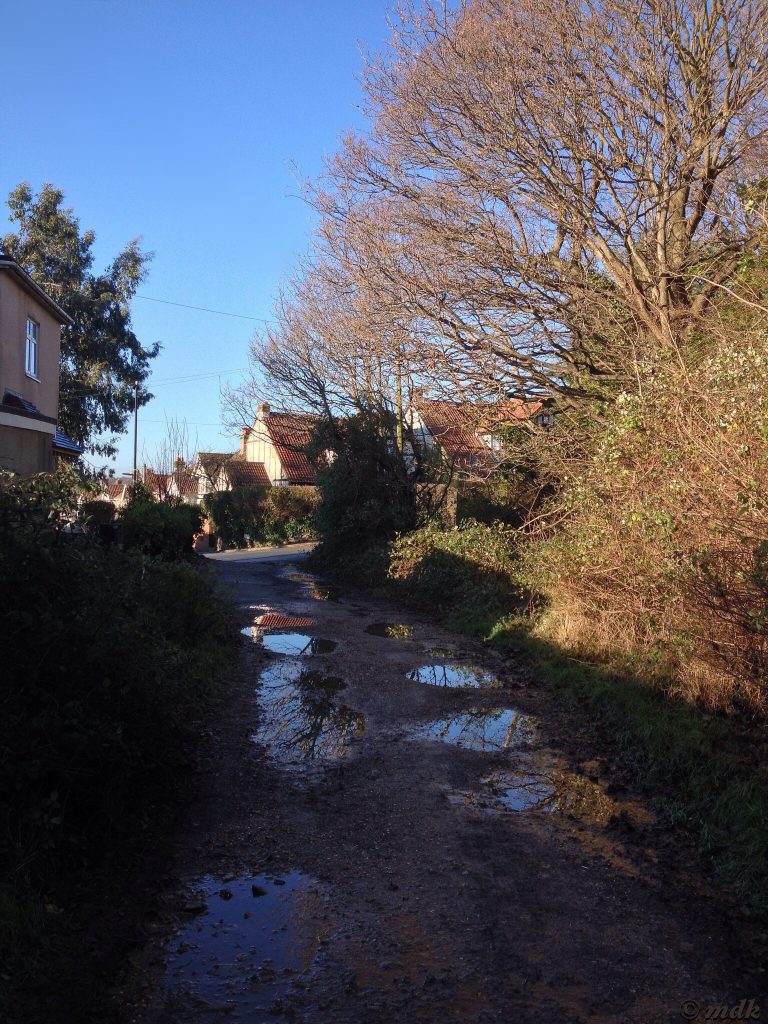 At first I thought I might be in luck. When I reached the bridge the park looked fairly quiet, just a couple of dog walkers. The low winter sun was behind me as I started off along the river. A quick stop to look back at the bridge showed a handful of walkers making their way across. Usually the little jetty is full of people throwing bread to the swans, today it was empty so I took the opportunity to walk out on it. For all the times I’ve walked along the river here I’ve never been out on the jetty. The first thing I discovered was the slipperiness of the metal ramp down to the water. I didn’t so much walk down it as slide, probably rather comically, flapping my arms while trying hard to keep my balance. Thank goodness there wasn’t anyone about to see me apart from the swans. One swan hissed as I skidded down onto the platform and I remembered the boy who ran off the jetty in fear of them. 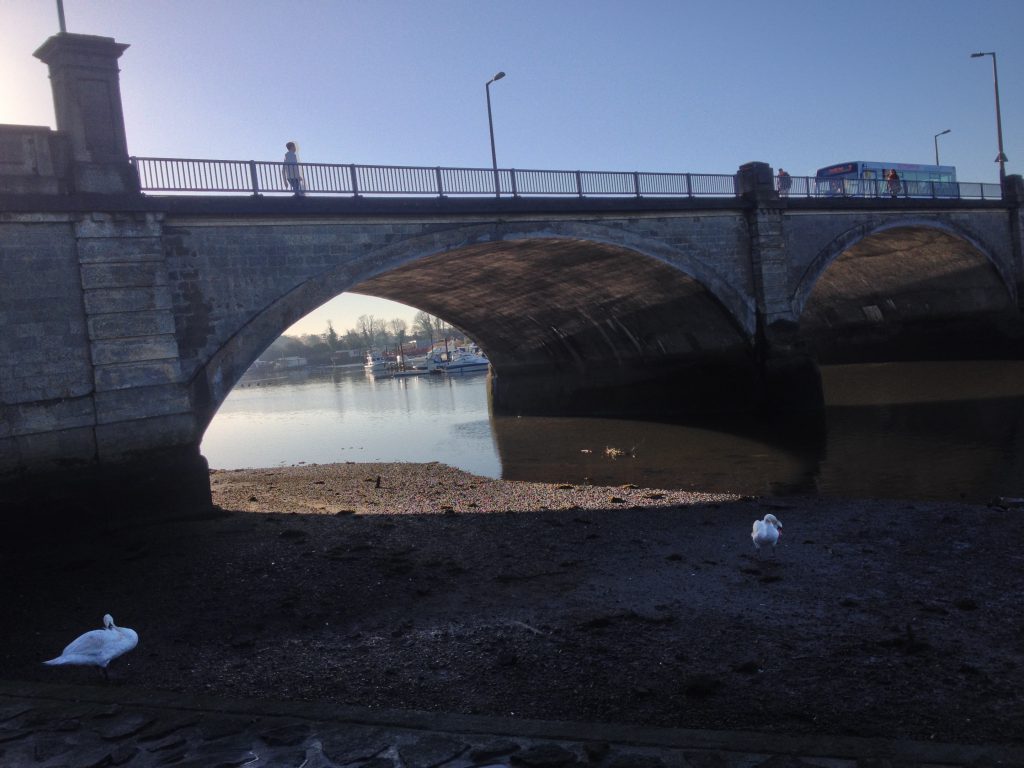 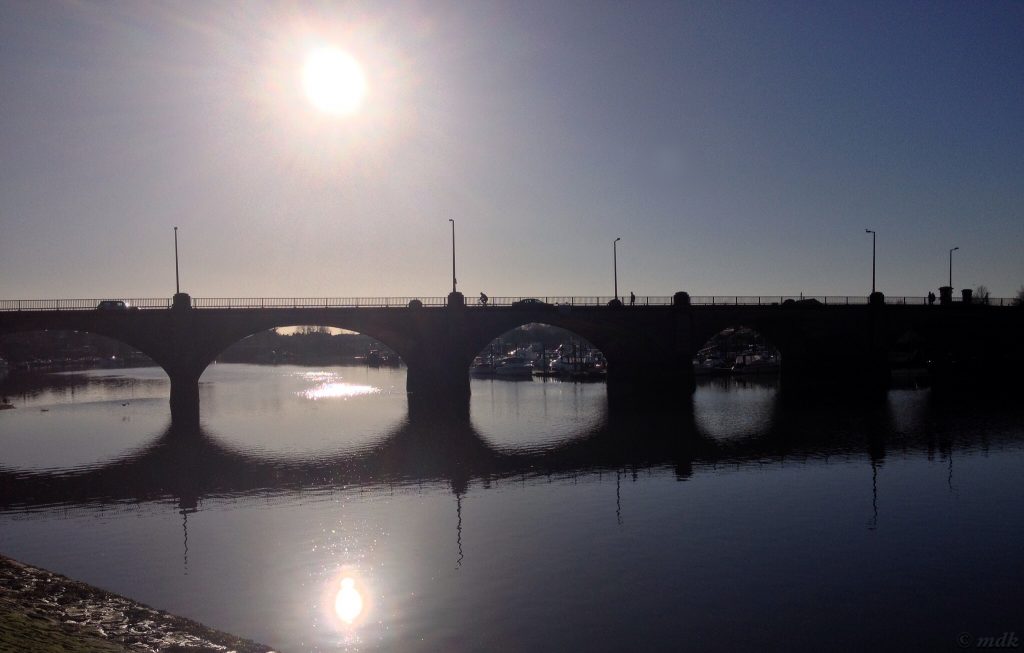 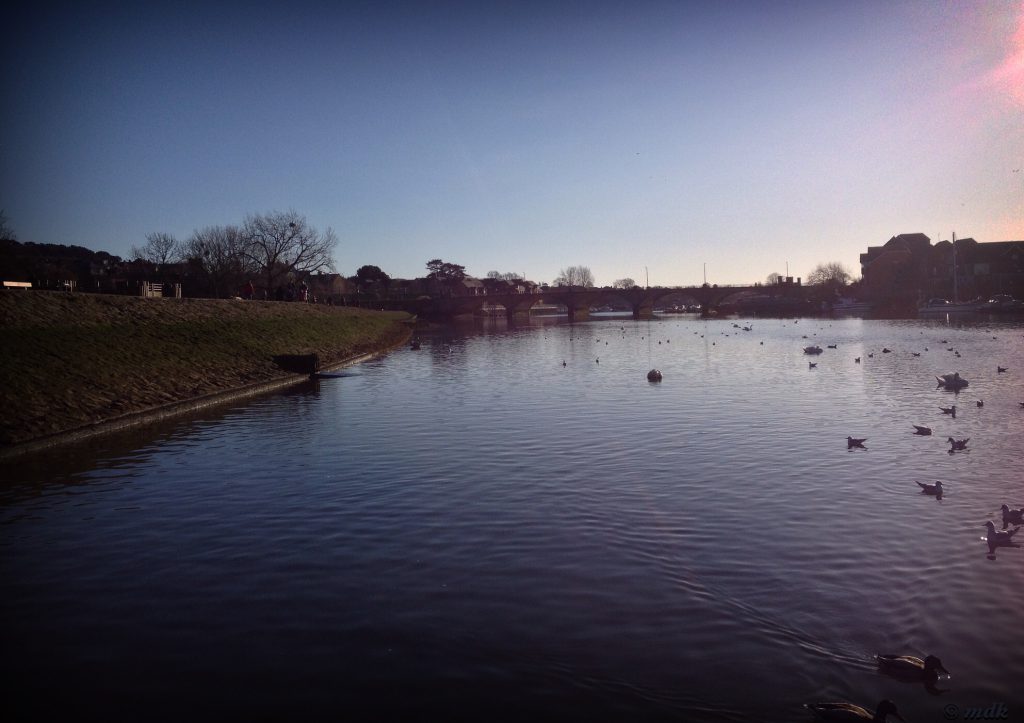 Out on the end of the little platform I got a whole new perspective on the river. The swans were so close I could have reached out and touched them, so close I could see every feather, their feet paddling away under the water and even the drops of water where they’d been dipping their heads in the river. Normally I wouldn’t relish being quite so up close and personal with swans, much as I love them, but the metal fencing around the jetty, probably there to stop idiots like me from falling in, also offered some protection from sharp beaks so I felt quite safe. Sunlight dappled the water. A cygnet and its parent came to have a closer look at me and, fenced in as I was, I felt a little like an exhibit in a swan zoo. Yet again I wished I’d thought to bring some bread or some seed to feed them. Once of these days… 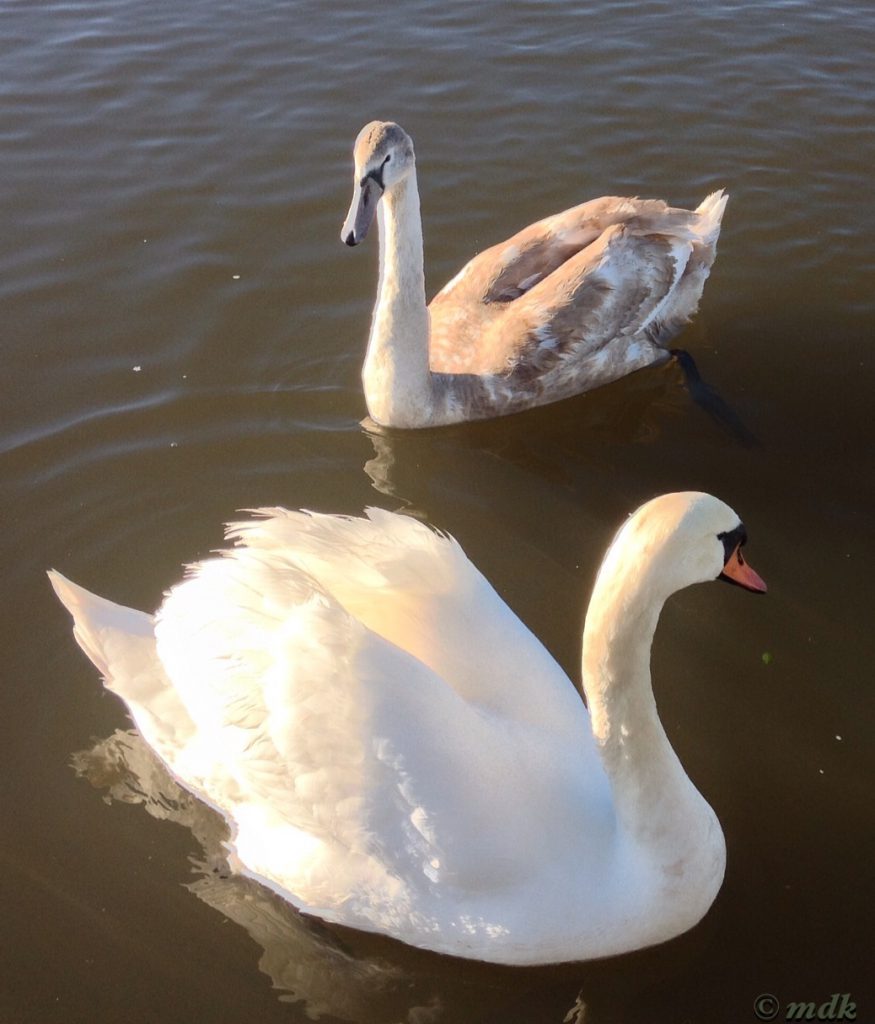 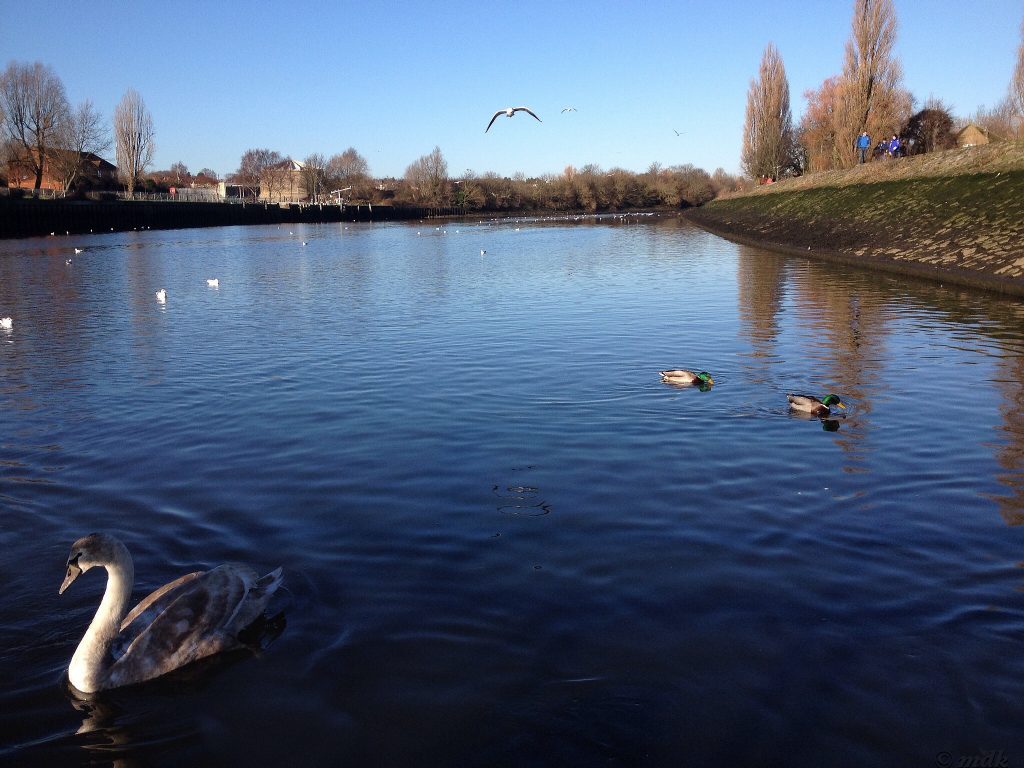 There were plenty of seagulls on the river along with the swans and the odd duck. I spent quite a while watching them and taking photos both up and down stream. When I finally looked back towards the bank I noticed it seemed to be getting quite crowded. Getting back up the ramp I was going to have an audience. At least this time I knew it was slippery and I managed my ascent with slightly more dignity than I had my descent. Hardly anyone was laughing. For all my regrets about not bringing the swans any bread they weren’t going hungry, a couple were on the bank throwing handfuls of bread into the water accompanied by the usual cacophony of seagulls not wanting to miss out on the feast. Sometimes I wonder if all that bread does them any good? 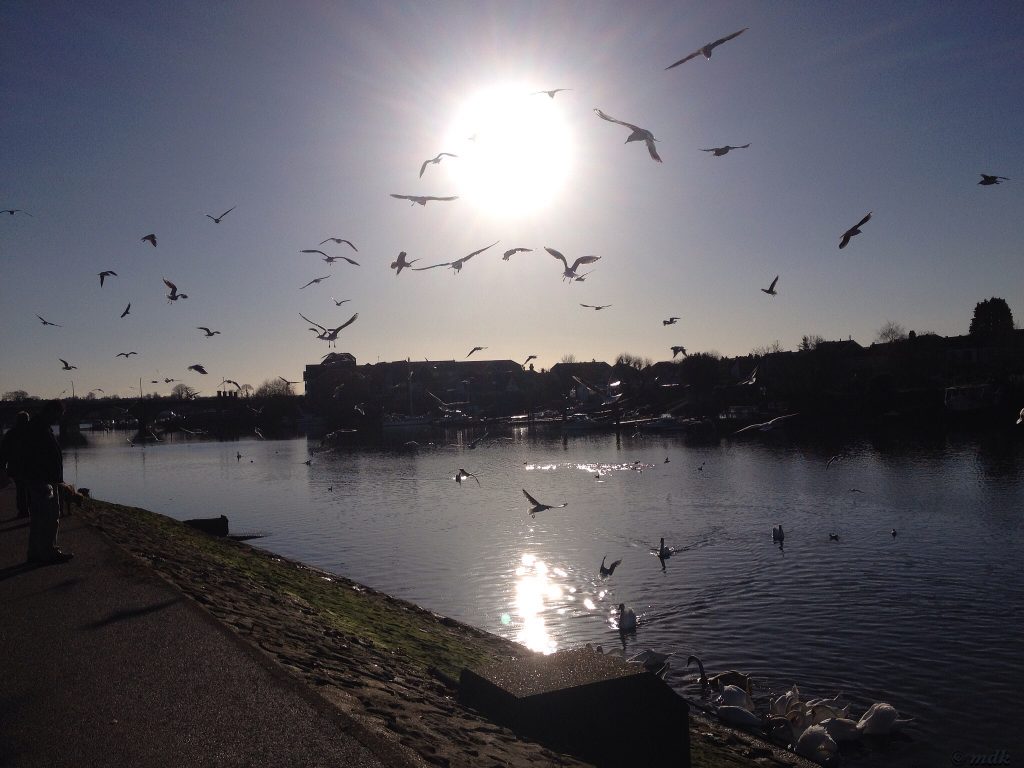 The trees are all completely bare now, especially after the stormy weather we’ve had but some still have some brightly coloured twigs to make up for the lack of foliage. By the time I got to the first bend in the river the paths were getting crowded with families going for pre lunch, or maybe it was post lunch, walks. Most were moving quite slowly so I found myself having to weave in and out of them to keep up a reasonable pace. When I reached the trail that runs down behind the reed beds I left the path altogether. At least it got me away from the crowds. It also took me past several rotting tree stumps I’ve been keeping an eye on. So far this year, despite some of them rotting away to almost empty shells, there hasn’t been a single mushroom or fungi, today though I was in luck. 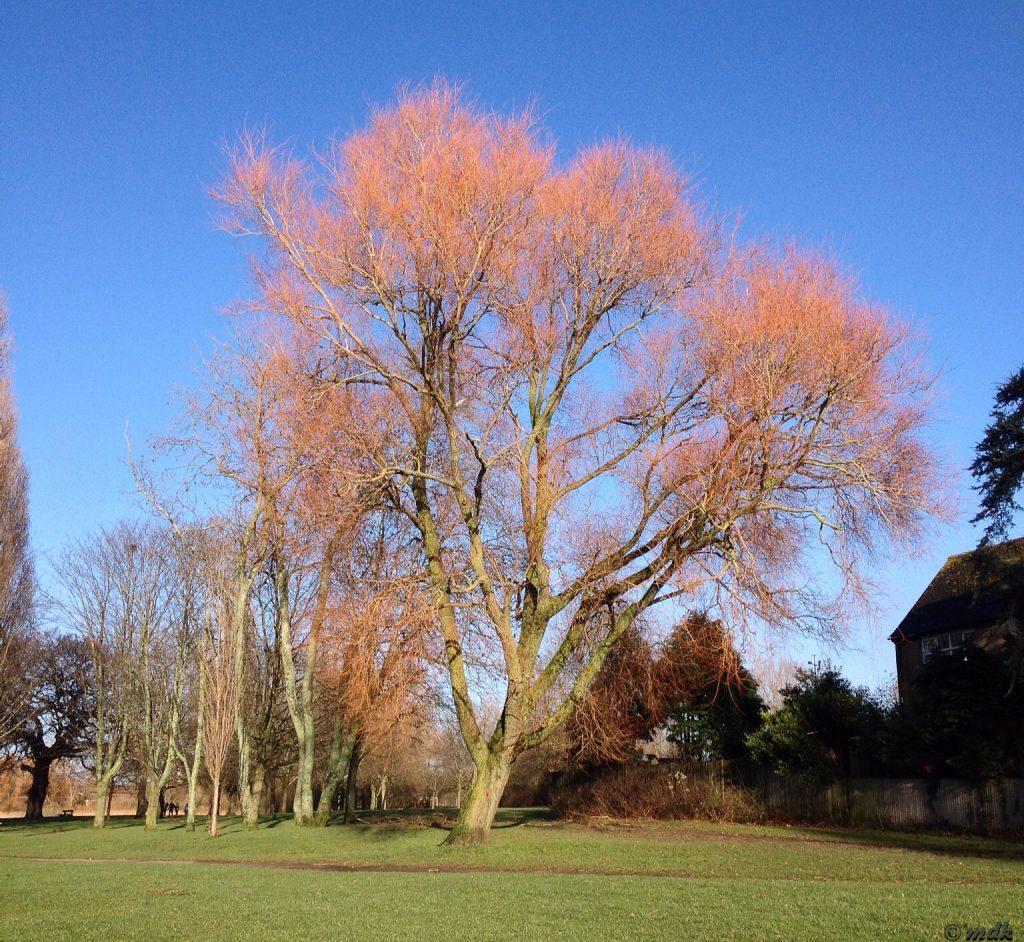 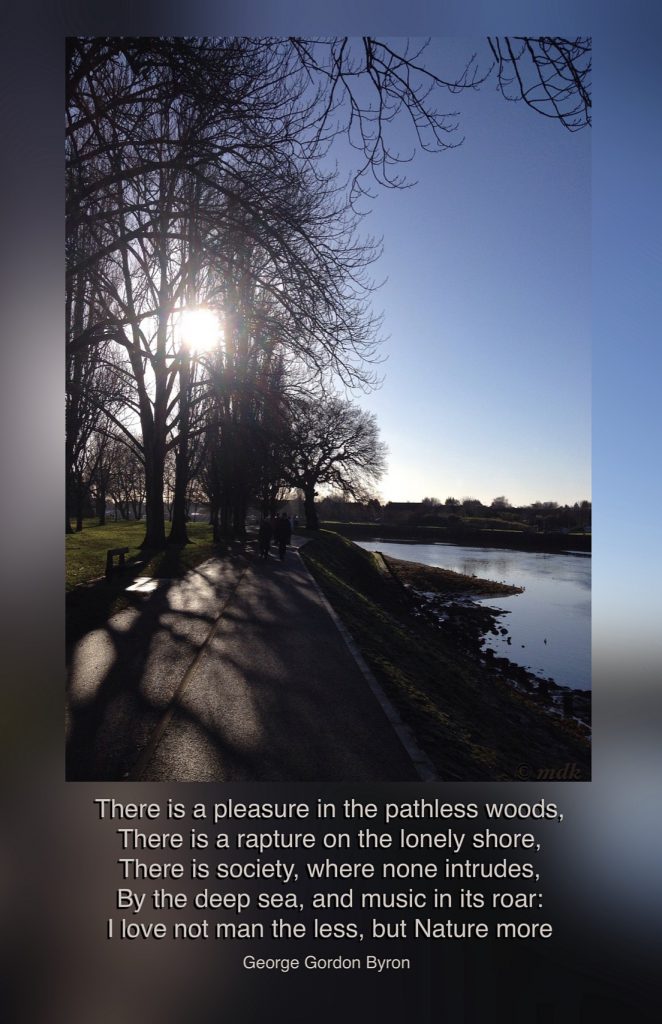 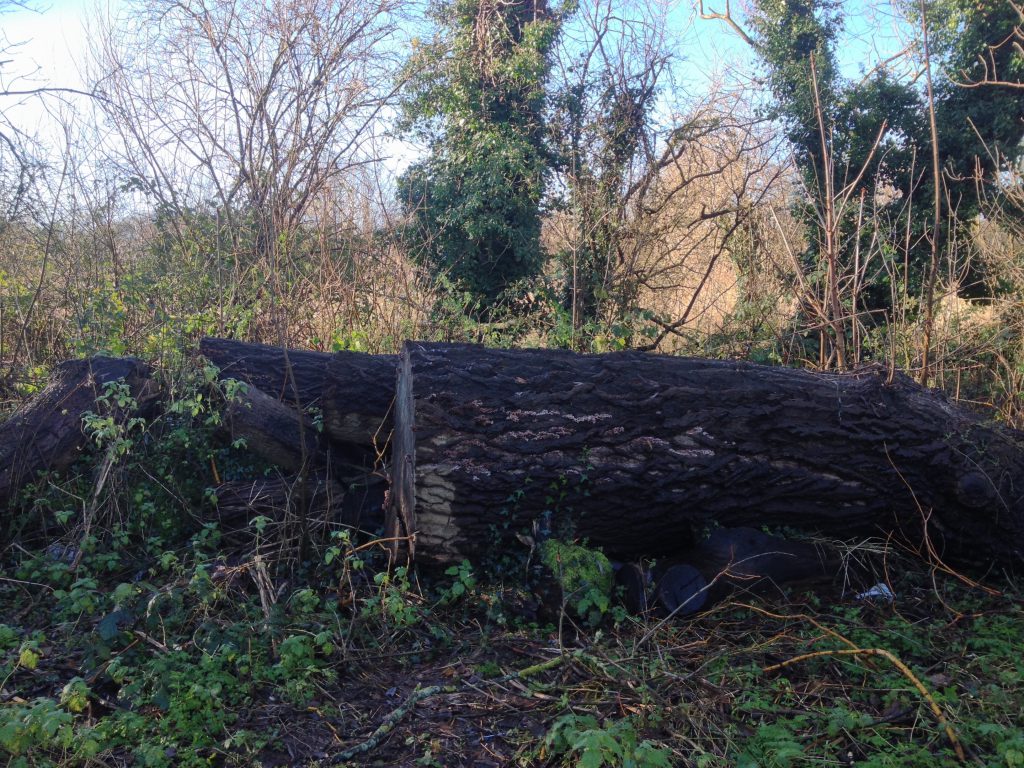 Since my last visit the stumps have come alive with frills of pinkish brown. Of course I went in for a closer look and the pinkish colour turned out to be more fawn than pink, graduating to a dark brown. They were quite velvety in texture. After a dabble with Google on a site called Fungi World I think they may be Chondrostereum Purpureum. The trail was muddy and strewn with mushy fallen leaves so there was a fair bit of slipping as I made my way along trying to avoid all the holes that I guess were made by foxes or maybe rabbits, although I’ve never seen a rabbit along here. 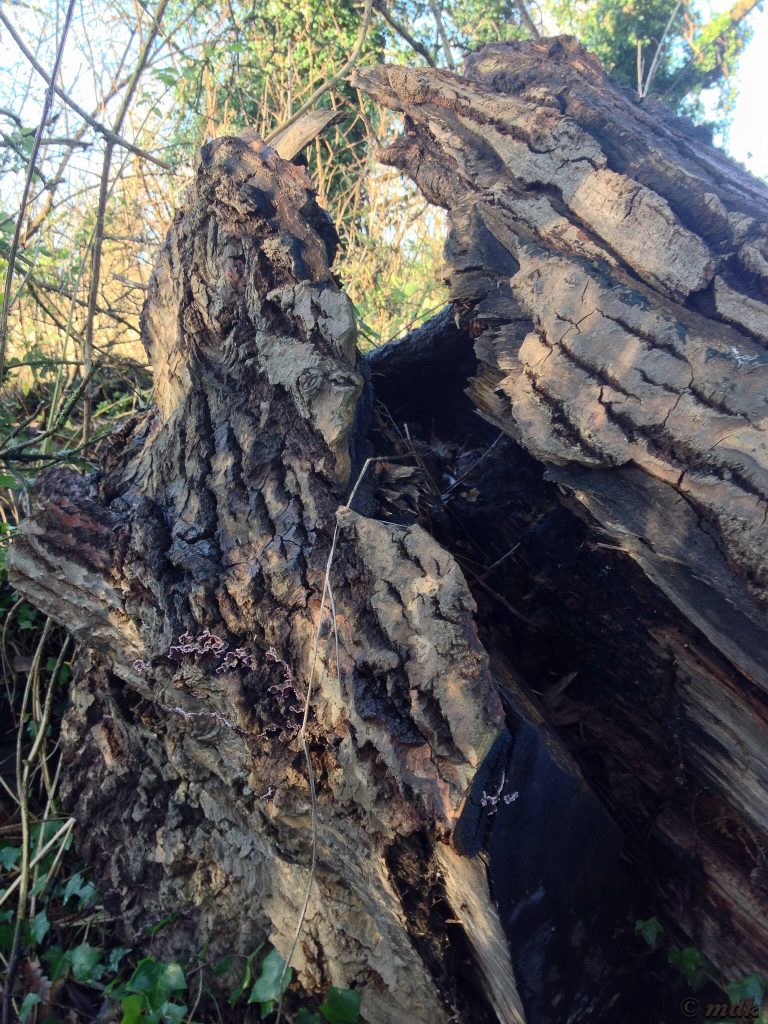 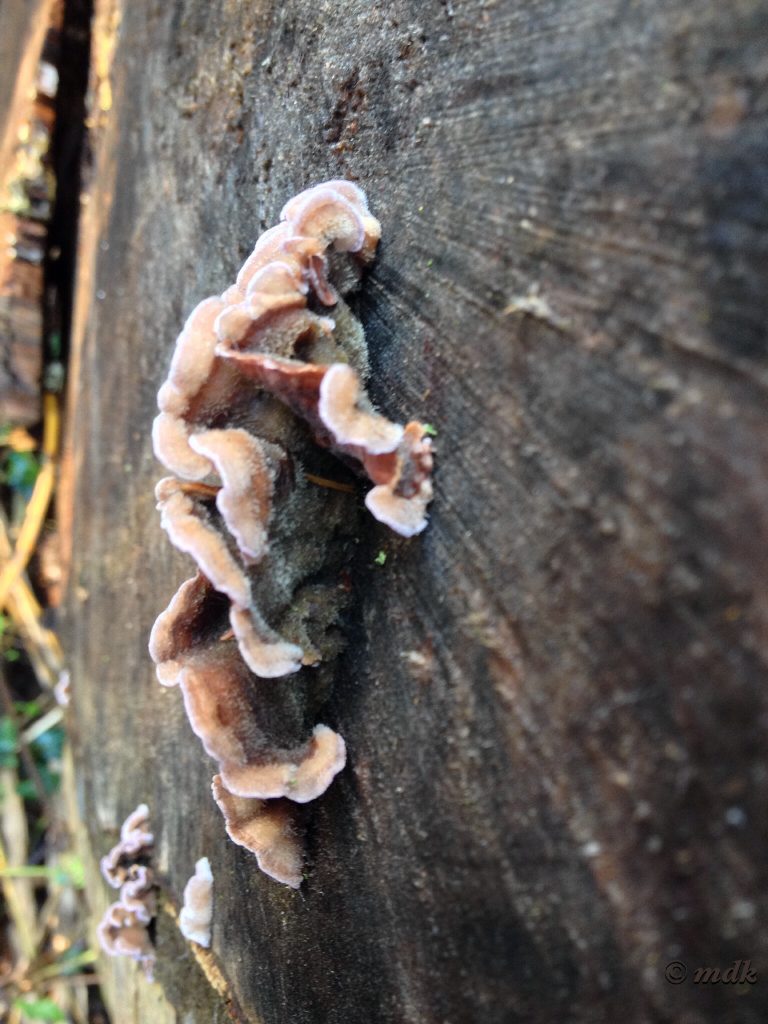 A little further along, at the next pile of rotten logs, there were more interesting fungi. These were unlike any I have seen before, bright orange with edges that reminded me of the cockle shells I find all along the shore. The really odd thing about them though was the slimy coating almost dripping from them, as if they’d been dipped in honey. The Fungi World website has some very similar called Flammulina Velutipes or Velvet shank. I bent down as far as I could without getting wet, muddy knees, angled my iPhone upwards to take some photos of the undersides so I could see the creamy, fleshy gills. 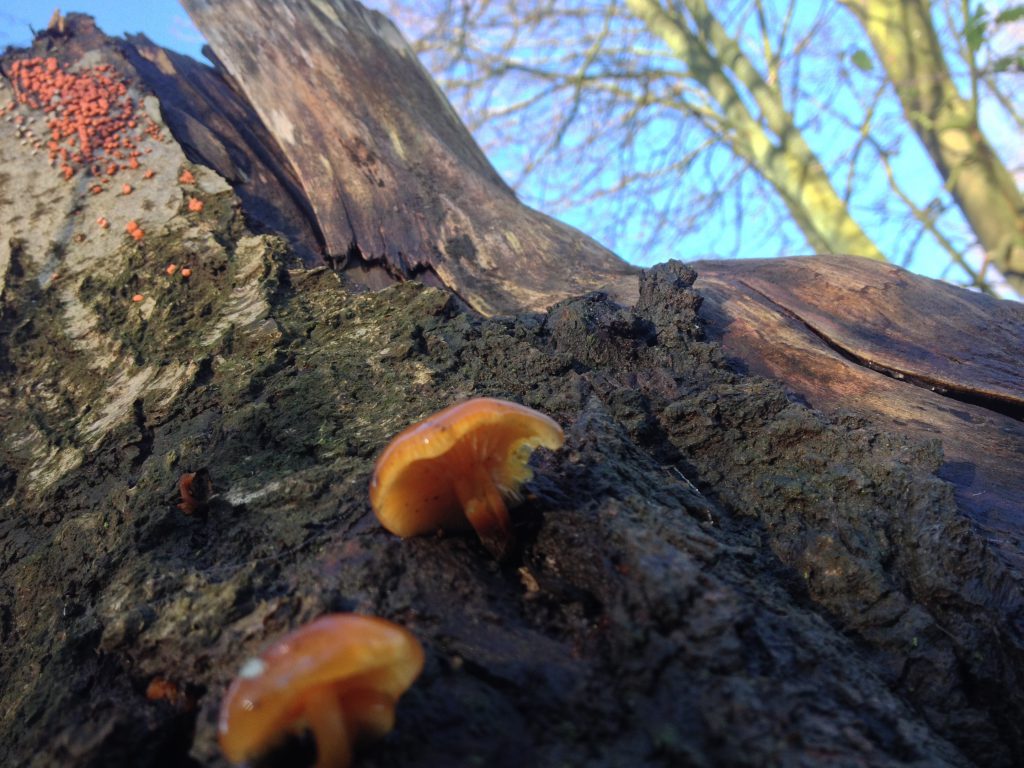 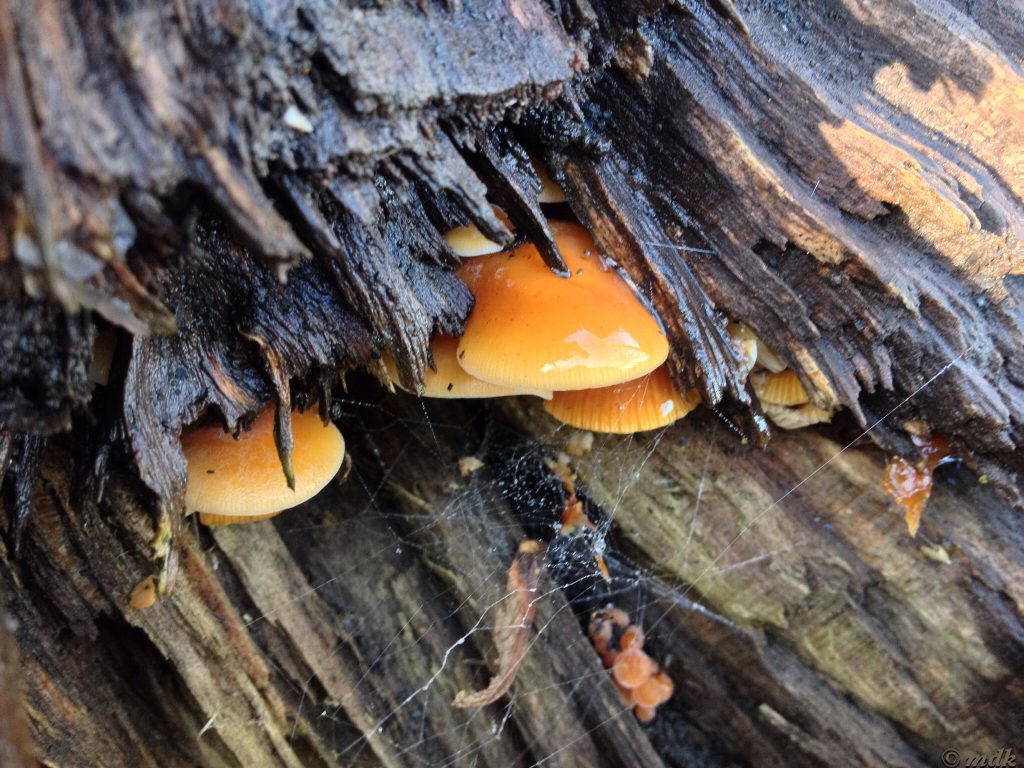 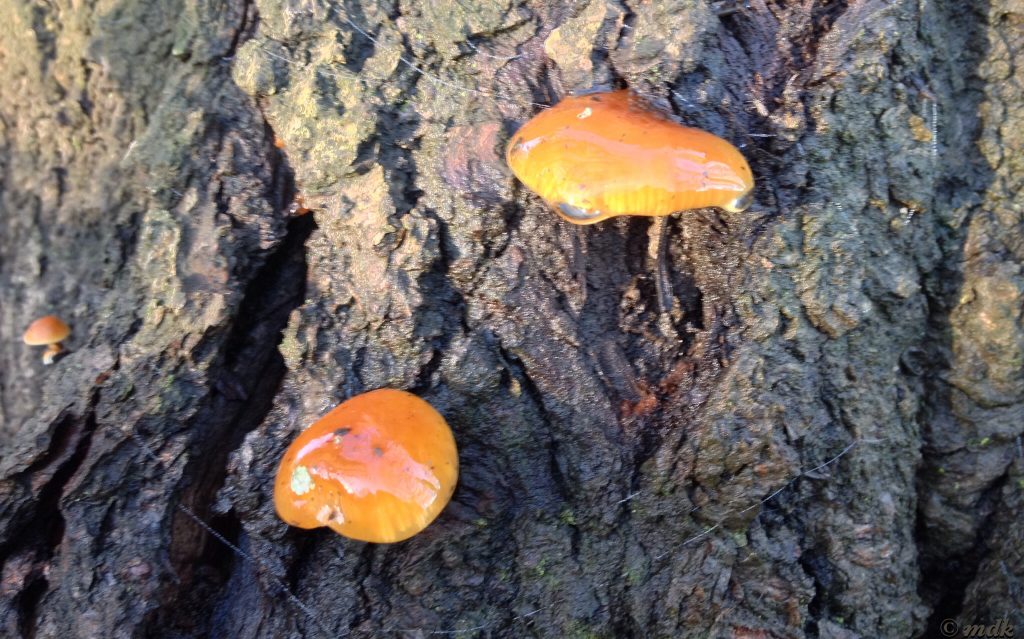 Back on the path again, on the final stretch towards Woodmill, there were trees with broken branches, more evidence of the storms we’ve had to go with all the bits of branch I’d had to avoid tripping on along the trail. On one tree a huge branch had been torn off by the wind, about a third of the tree. Hopefully rot won’t set in and kill the whole thing. At the mill itself the water coming through the sluice was flowing faster than I’ve ever seen it, churning up the water almost all the way across to the far bank. With no leaves on the trees I managed to get a good view from the bank right into the sluice. As usual, the roof was filled with gulls seemingly unperturbed by the frothing bubbling water below although I noticed they were keeping off the river. 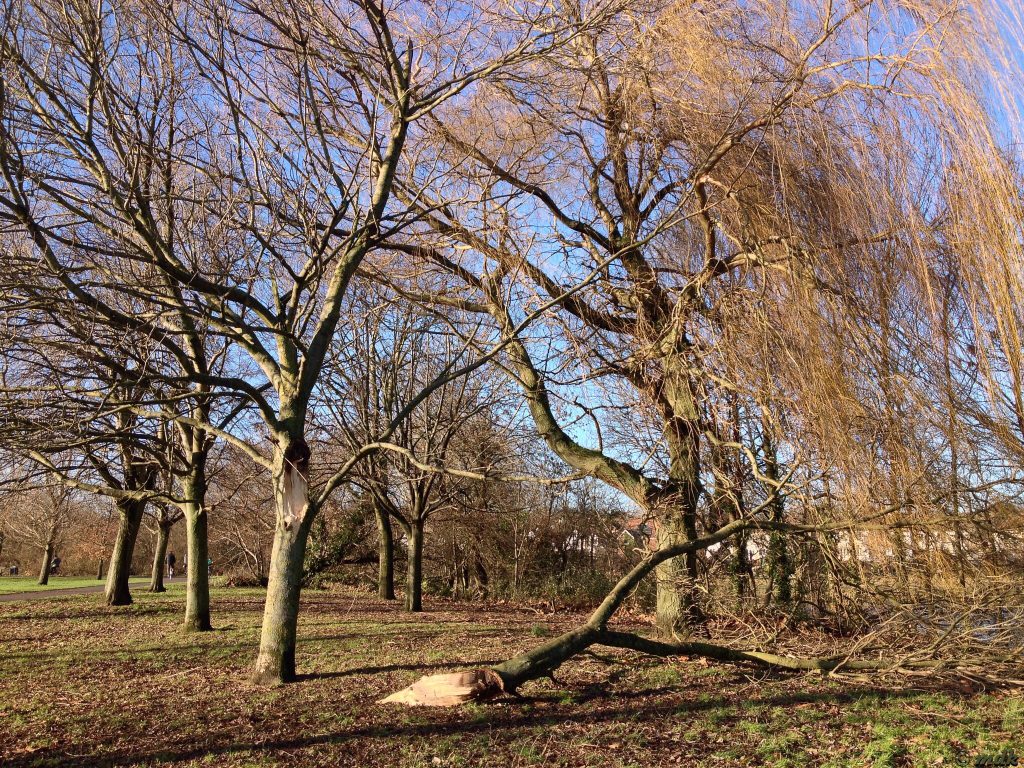 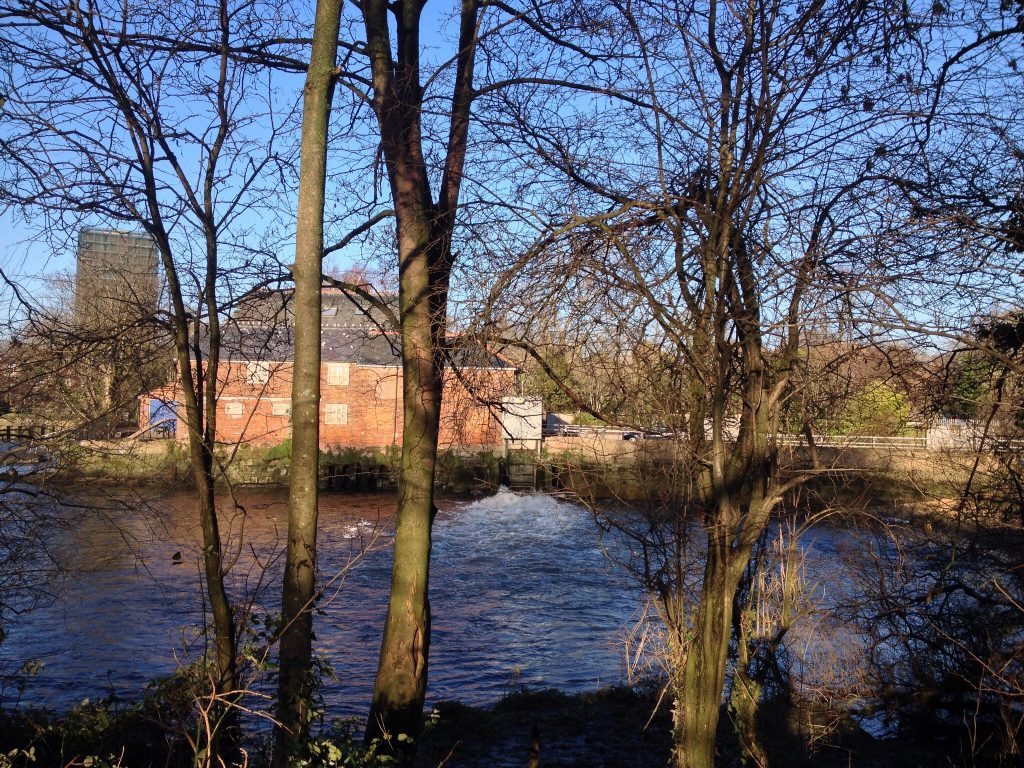 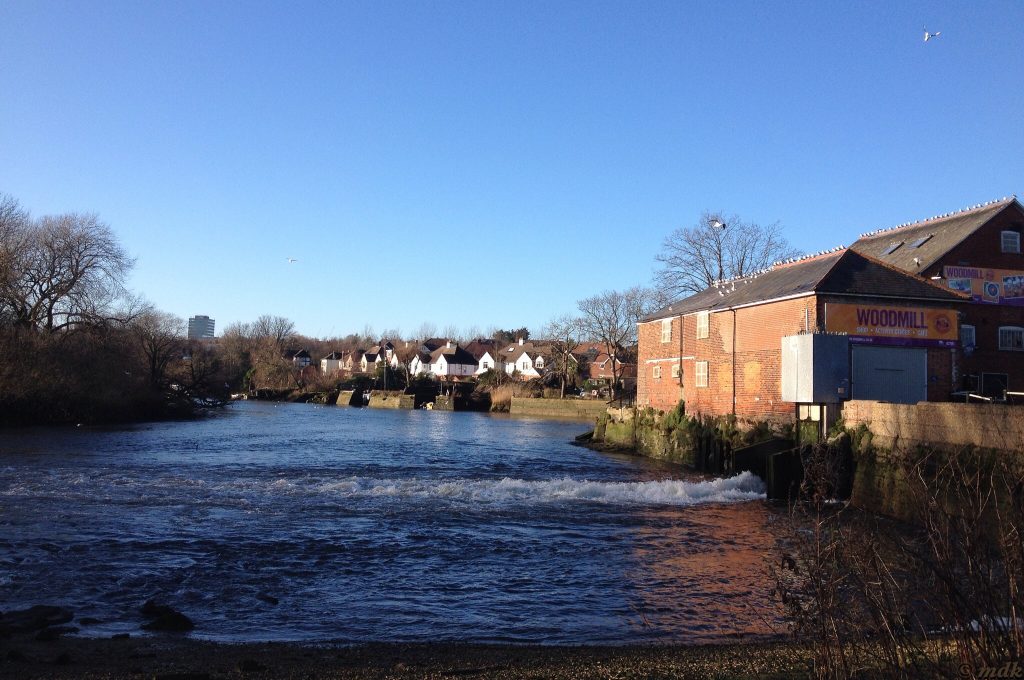 On the opposite side of the road the water was surprisingly calm but much higher than usual. I didn’t hold out much hope of making it all the way to the White Swan without encountering some flooding. This side of the park is undoubtedly the prettiest and, as I walked, I couldn’t help admiring the way the trees reflected in the water. There may not be any leaves but there is so much ivy the water was a mixture of blue and green like daubs of paint on a Van Gogh masterpiece. A few ducks were paddling listlessly along on the far side, too far away for good photos but it didn’t stop me taking some if only for the wonderful reflections. There is something about reflections in water that really makes me smile and a little further along an arched branch dipping into the river created an almost perfect circle with its mirror image. 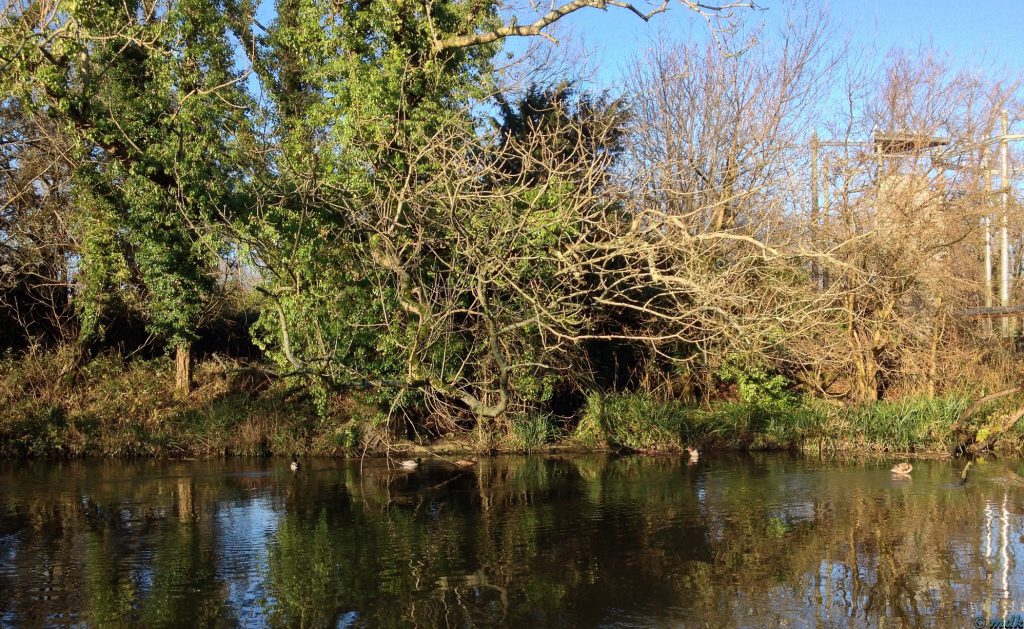 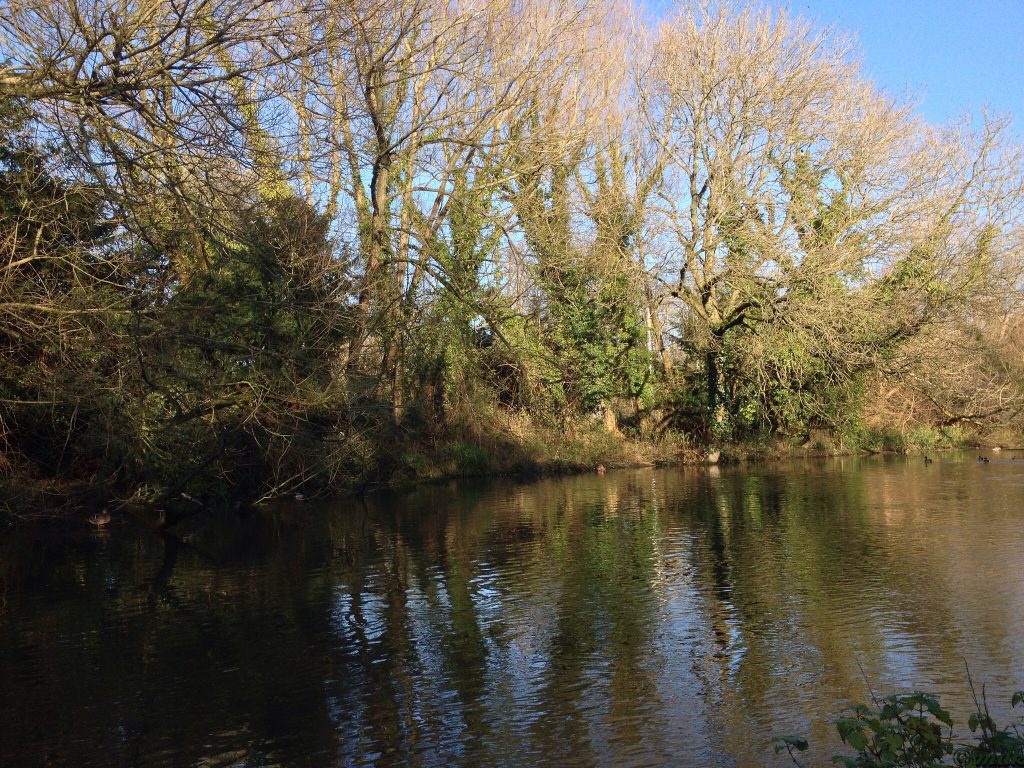 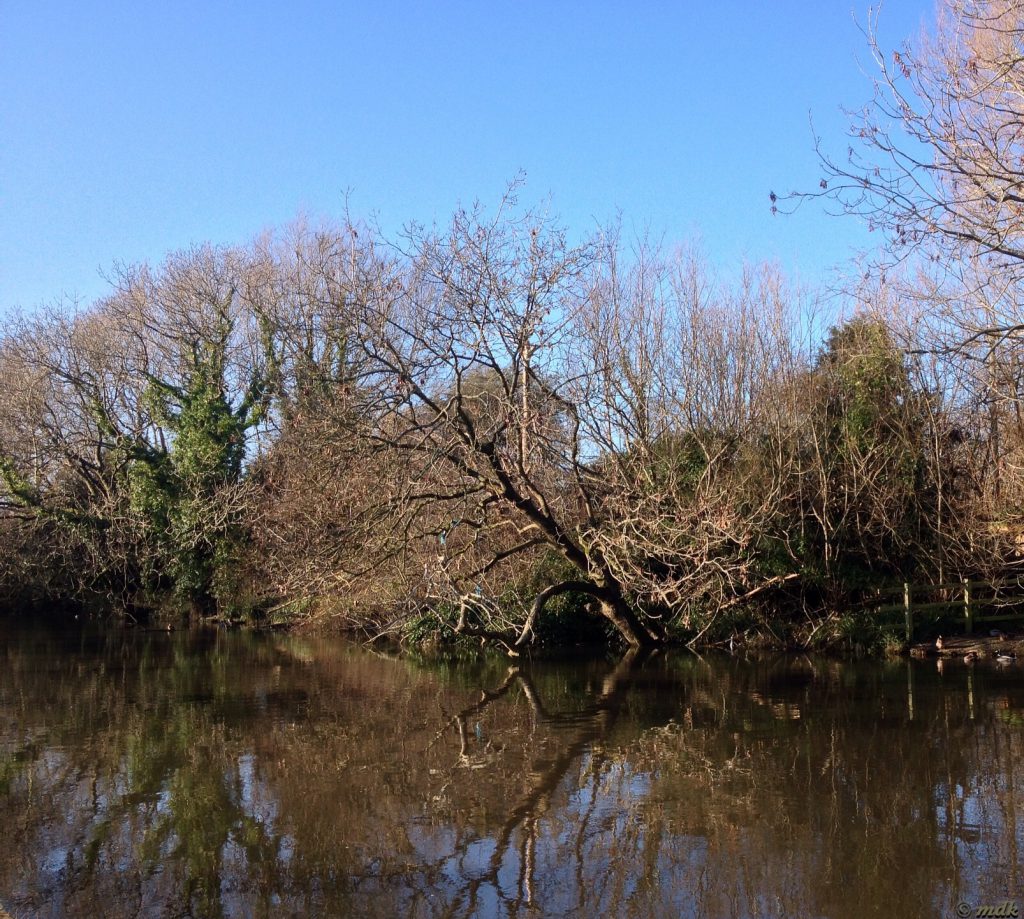 When I came to the next bend the tall dead tree used by gulls for perching caught my eye. Almost completely enveloped in ivy the green column, along with all the perching birds, had a corresponding column in the river below. Soon the little bridge was in sight and I could tell by the knot of people on the path beside it that there were floods. Sure enough, when I got closer, the path was flooded right across. Some people were standing looking, unsure whether to turn back or risk wet feet while other, more hardy souls, braved the shallowest water right on the edge of the river. One man lost his footing on the slimy stones and almost ended up in the Itchen. Boots or no boots I decided discretion was the better part of valour, besides I didn’t fancy walking two and a half miles home dripping wet and covered with river weed. Time to turn back and make for home. 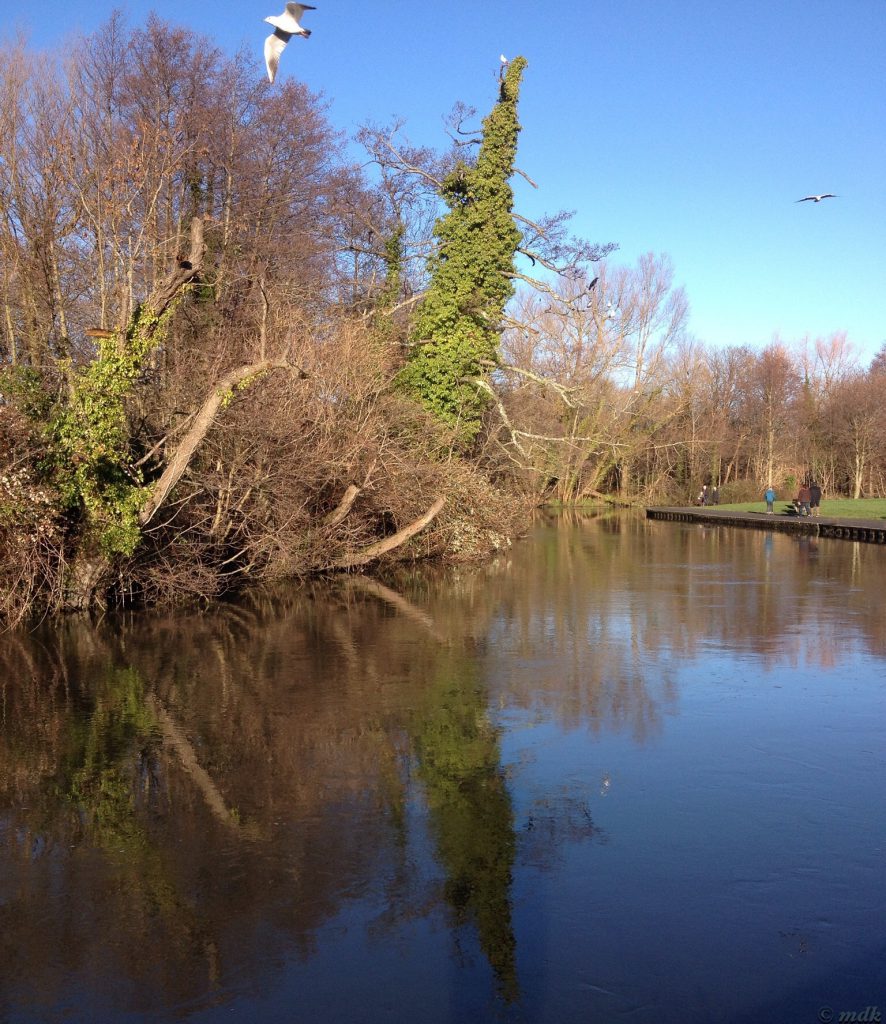 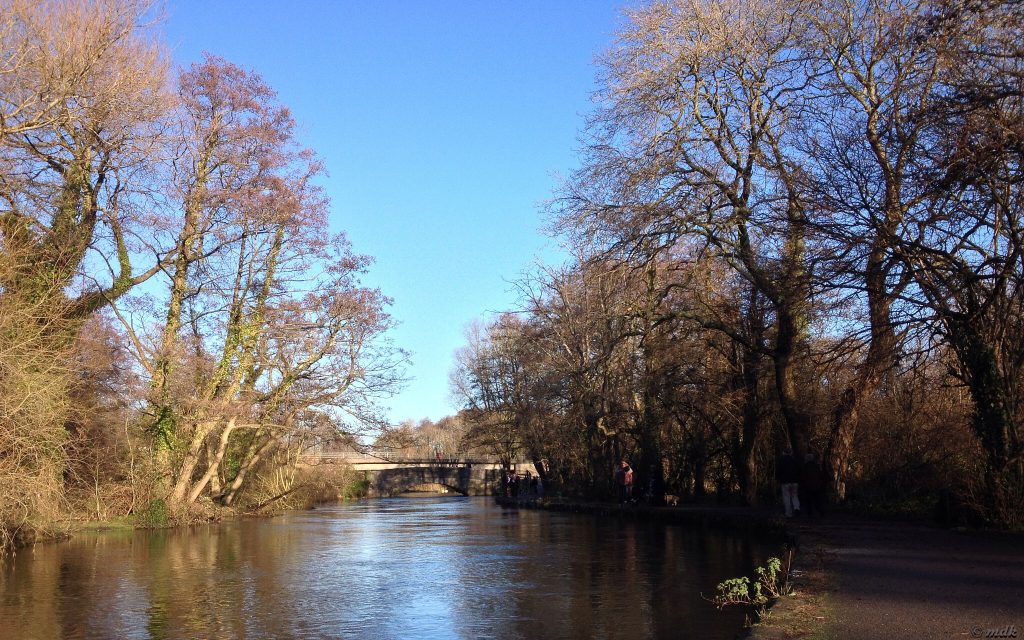 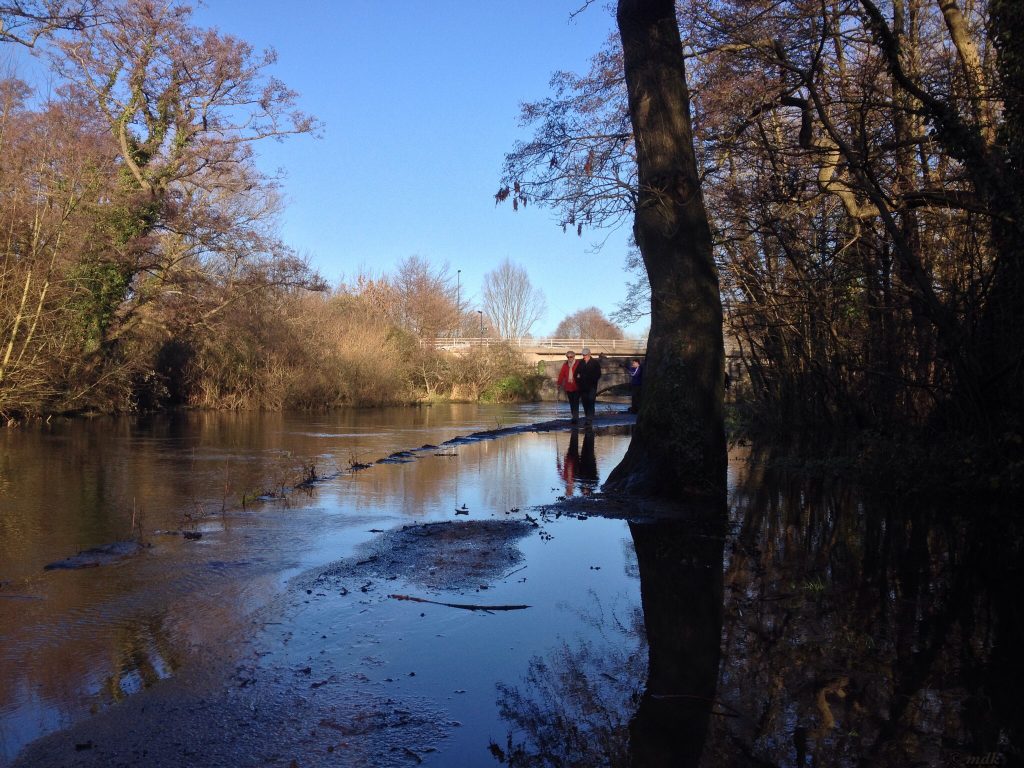 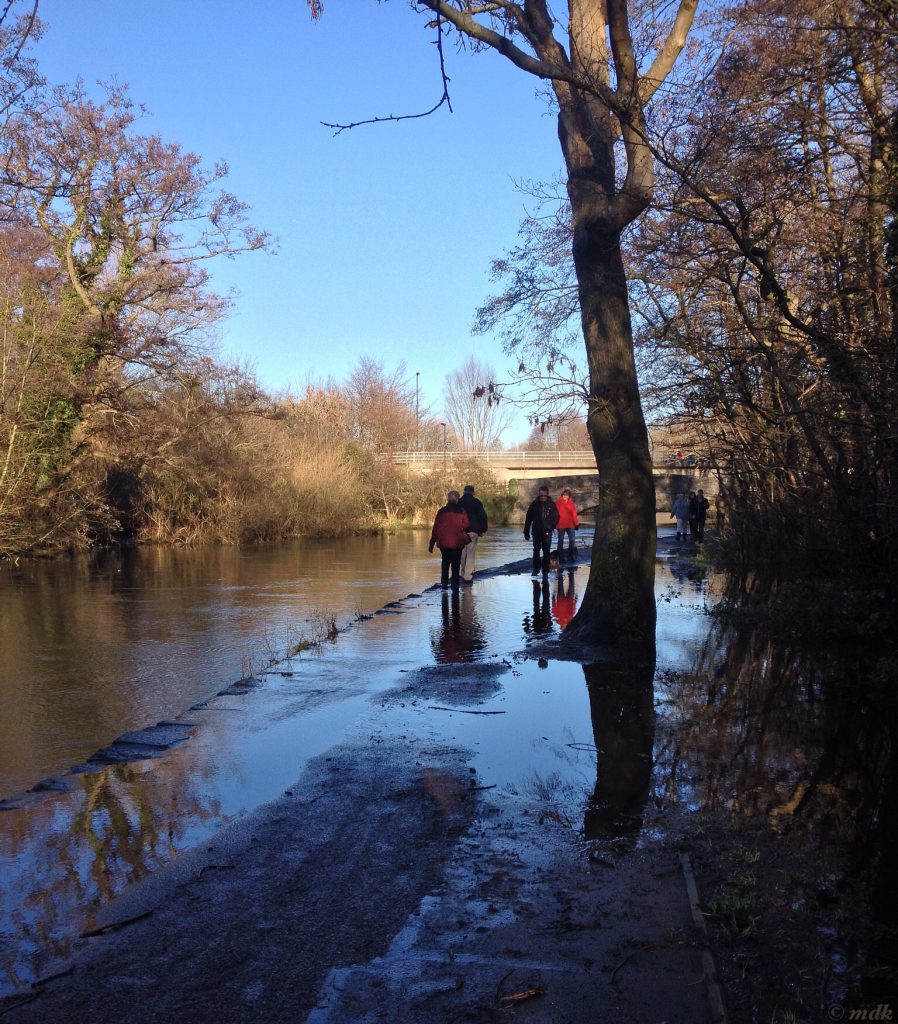 Walking back the way I’d come I had to spend quite a bit of time tramping over the muddy grass to get past crowds and crowds of people who also thought a Boxing Day stroll was a good idea. I don’t think I’ve ever seen so many people in the park before. Maybe this walking thing is catching on.