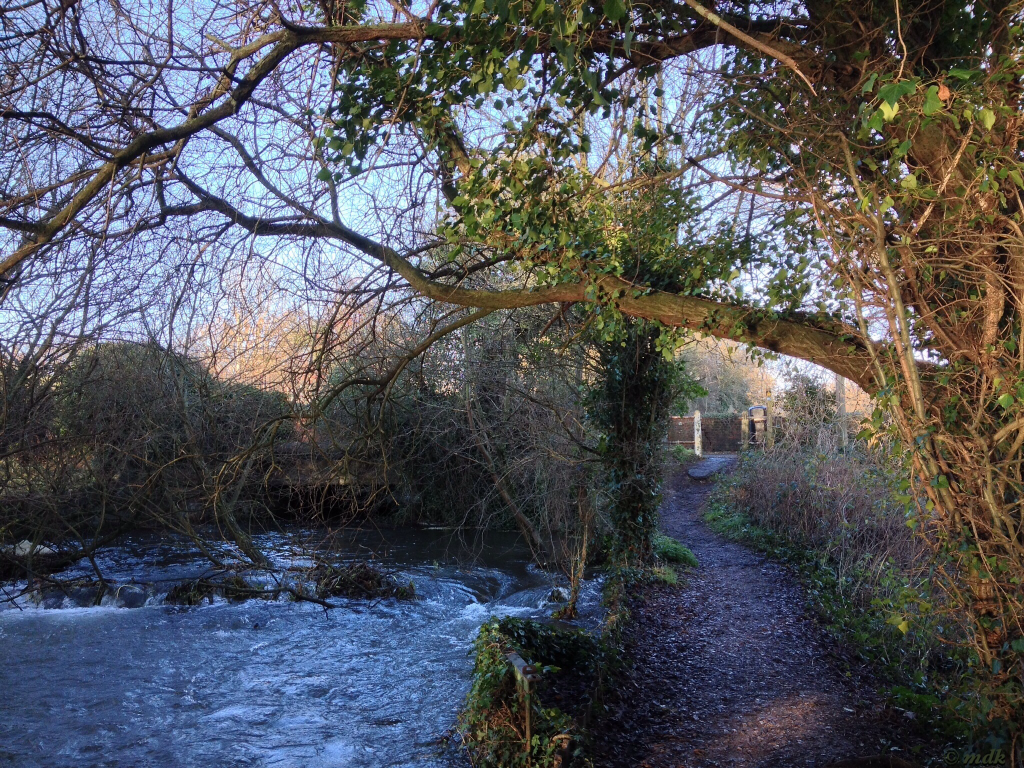 My last walk of 2013 and I’d reached the final stretch of the Itchen Navigation before the new bridge at Withymead. There were bank breaches and I wasn’t sure whether to continue or not. I did dither for a moment or two trying to decide whether to go on or take the road route to Eastleigh. It didn’t seem all that sensible to go off down a muddy trail at almost half past two with a good three and a half miles of mostly unknown territory ahead and the prospect of darkness in the next hour or two. Then again, I’m not known for being sensible at the best of times and I really did want to see the new bridge…

When I crossed the road at Allbrook and saw water churning, boiling and lapping at the path, I almost changed my mind. Once again I stopped and dithered, looking back at the road and wondering if I was completely bonkers to attempt it. It wasn’t long before I came to the first mud and more breaches in the riverbank. With the cold water licking at my feet I squelched and splashed my way around the bend towards the railway bridge, as long as I could get through that I’d be fine, probably… 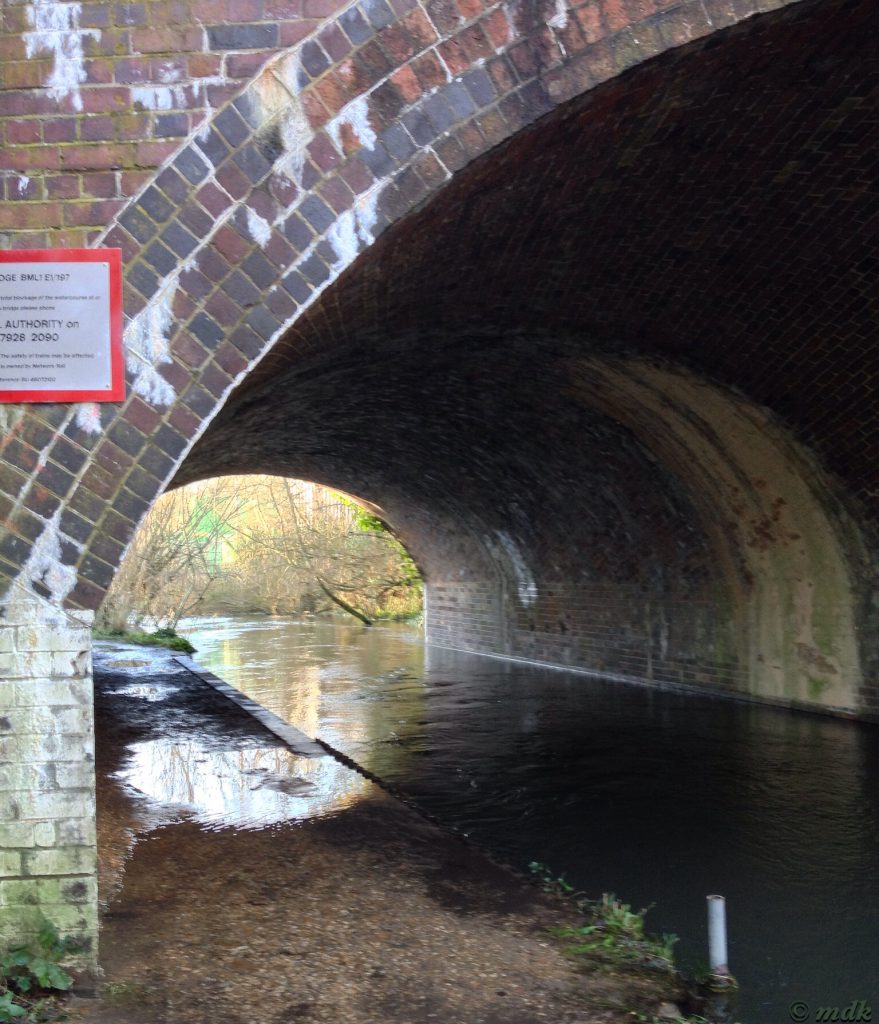 As it happened it could have been worse. There was some water under the bridge and I’m not just talking about in the river, the path was flooded but not so much I couldn’t walk through and at least it wasn’t muddy too. When the railway company constructed the new Southampton to London line in 1838 the canal got in the way of their nice straight lines so they moved it a little. The new part runs from the road to just past the railway bridge but you can’t see the join. 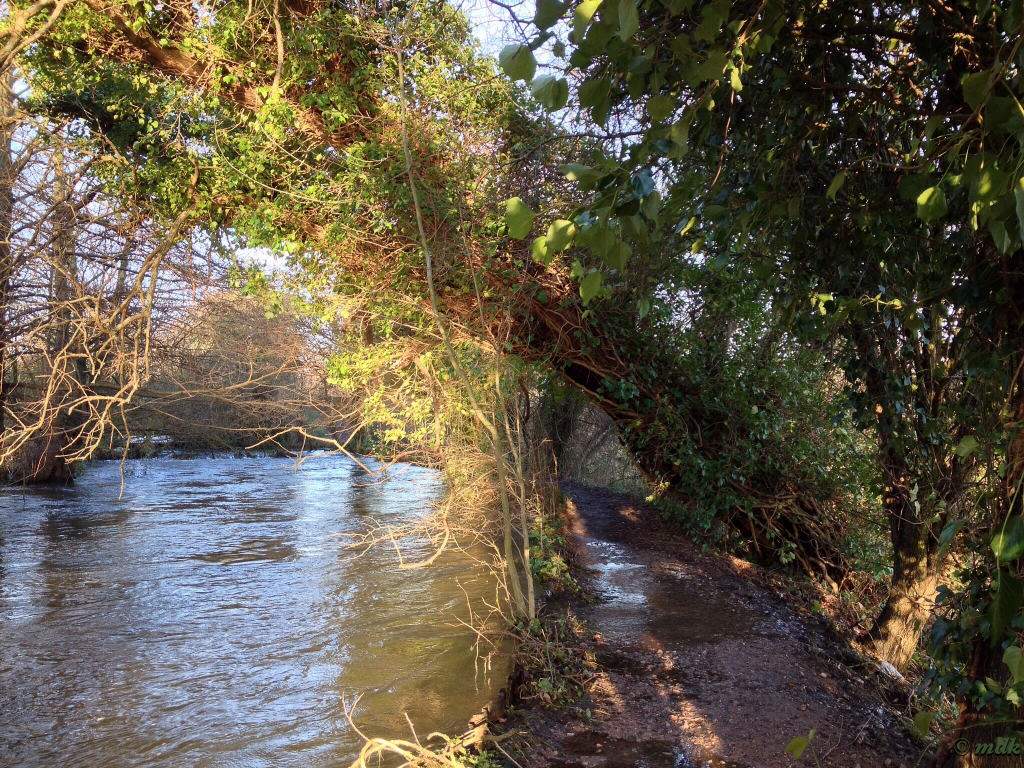 The next half mile was still familiar territory, the canal swings in a wide loop to the west and the gardens of all the houses at the bottom of Allbrook Hill and the top of Twford Road line the opposite bank. The Itchen Navigation Heritage Trail Project rebuilt the path here in the 1990’s so, apart from being a touch damp in places, it was a nice easy walk and I could enjoy looking at the gardens and dreaming they were mine. One of my favourites is the little arbour right at the water’s edge with red chairs and a bird table. Further along a fence and gate have been painted blue since I last walked this way, I kind of like it. 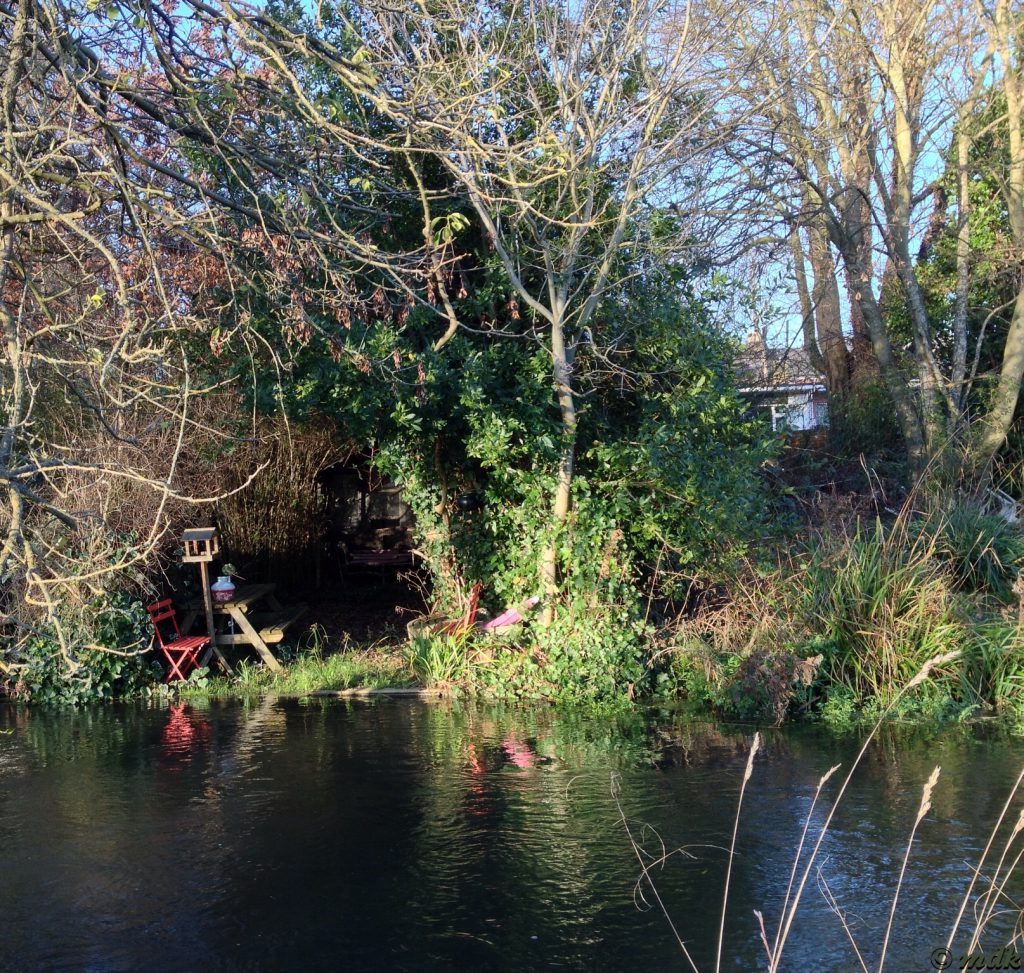 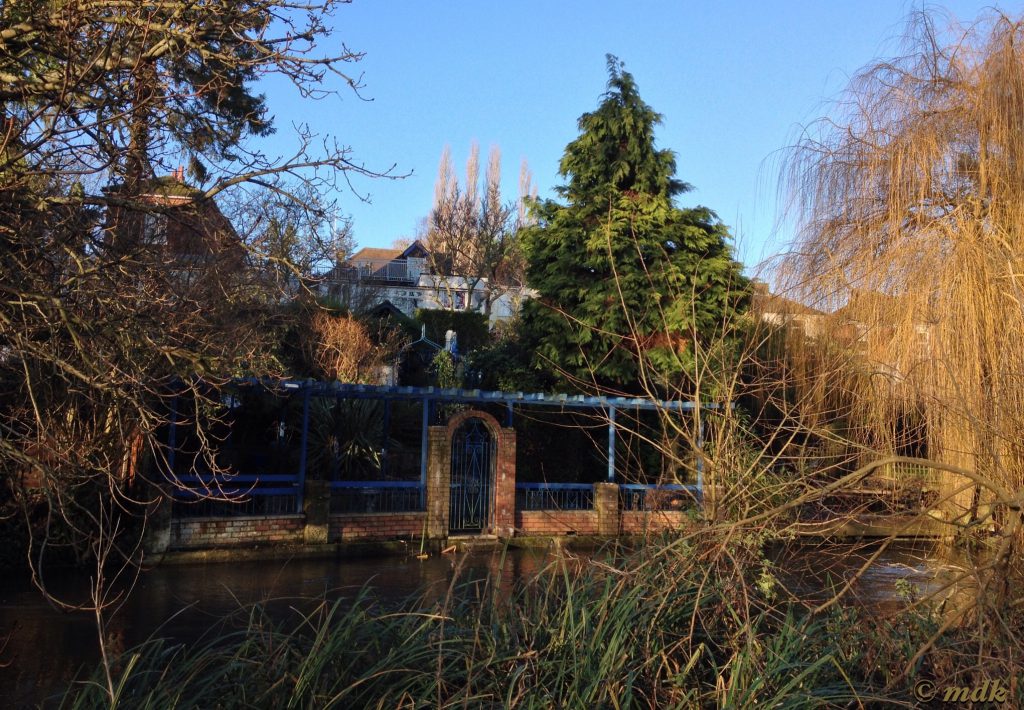 The shadows were getting longer as a approached Ham Bridge, my last chance to get off the Navigation before I set off along the unknown section but I pressed on. I’d come too far to give up and I was almost sure I could reach the end before dark, well, as long as I didn’t meet any more obstacles. So I passed the cut way that leads up to Twyford Road and set off along a winding path I’d never walked before. 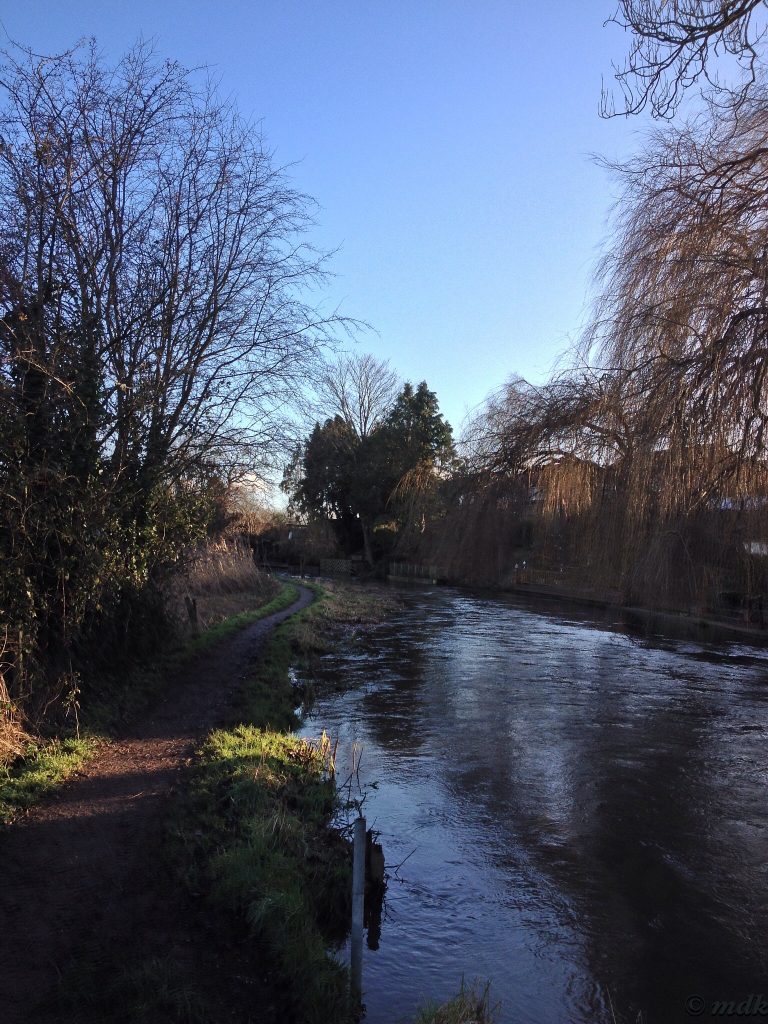 The houses backing onto the canal were smaller but the water seemed calmer. The little gardens were filled with seats and ornaments, I even spotted a small wooden windmill in one. When I came upon another rustic bench I’d have liked to sit a while and rummage through the crumbly mess of chocolate gingerbread in my bag, my tummy was rumbling, I’d hardly eaten anything since breakfast, but I was worried about the time so I passed by. 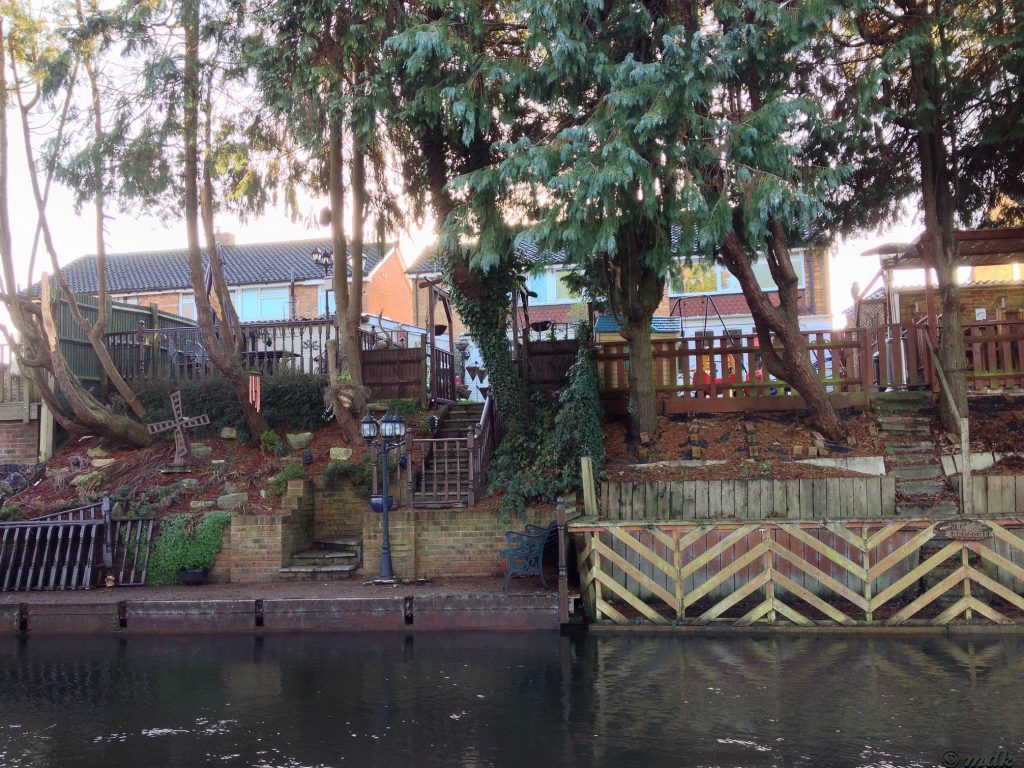 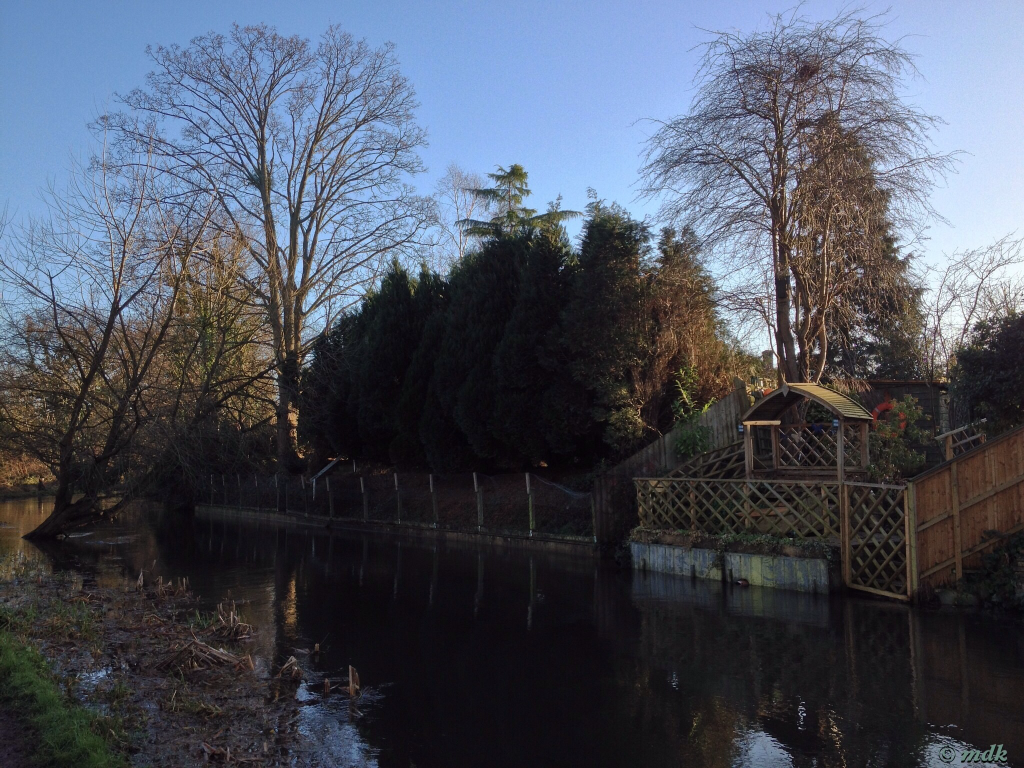 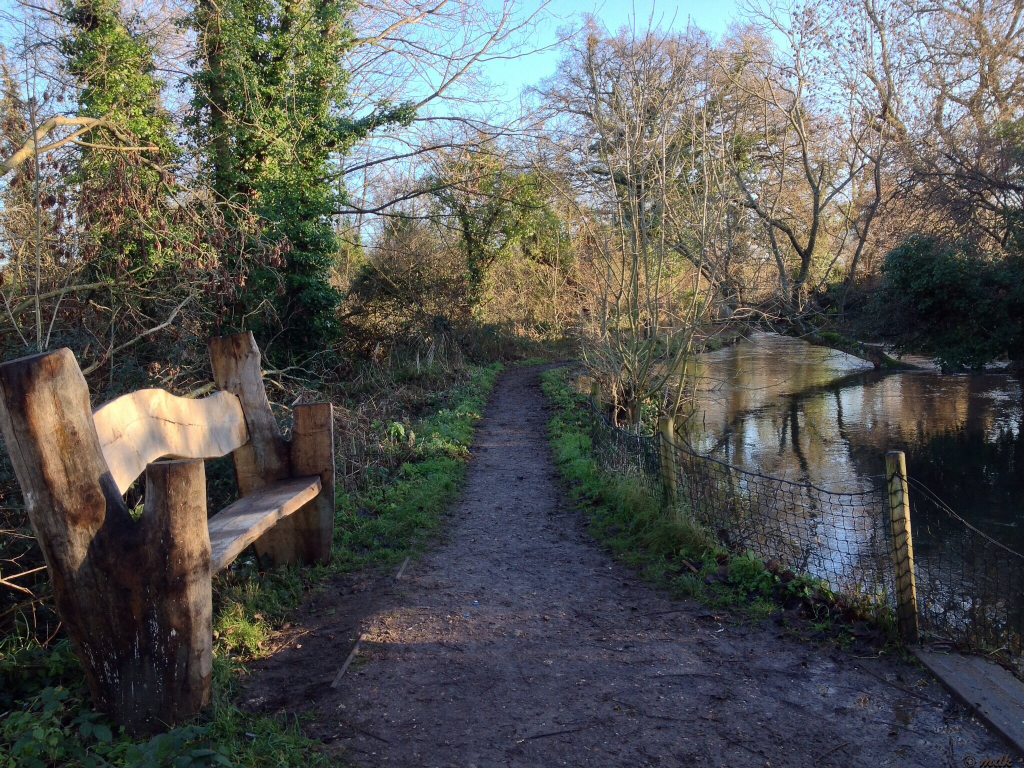 The river loops back round towards the east at this point and, before long I was going under the railway line again. This railway bridge was built in 1838 but has been added to several times, the last in preparation for the invasion of Europe in 1943. In next to no time I could see a bridge in front of me, I wasn’t sure, but I thought it might be Withymead. 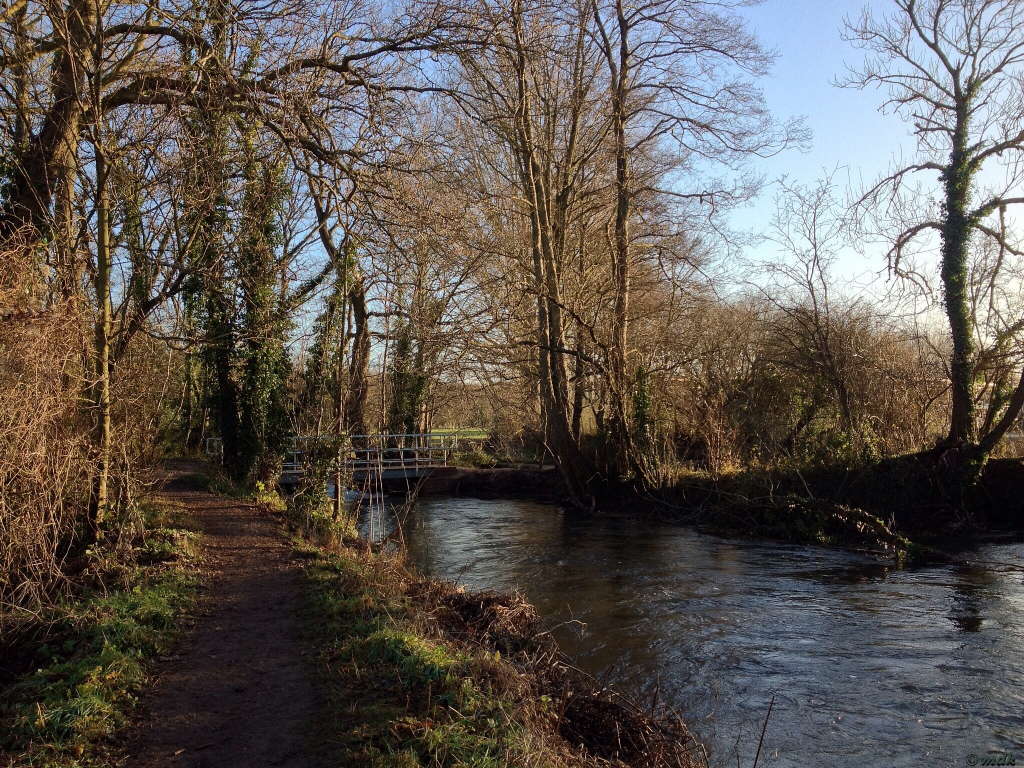 As soon as I saw the weir beneath it I was positive and I felt quite elated. For more than six months the bridge has been out of action and a crossing that has been used for over one hundred and fifty years was closed. The original wooden bridge was vandalised, set on fire and much of the wood appeared to have been stolen when I first came this way. Quite why someone would want to do that is beyond me but I, for one, couldn’t understand why it took so long to replace it. By all accounts the original Withymead Bridge was a pretty wooden structure. I never got a chance to take any photos because it had been stolen when I first found it but the Canal Society website I used for a lot of my research, created by a very kind man called Peter Oates, did have some and he gave me permission to use them. 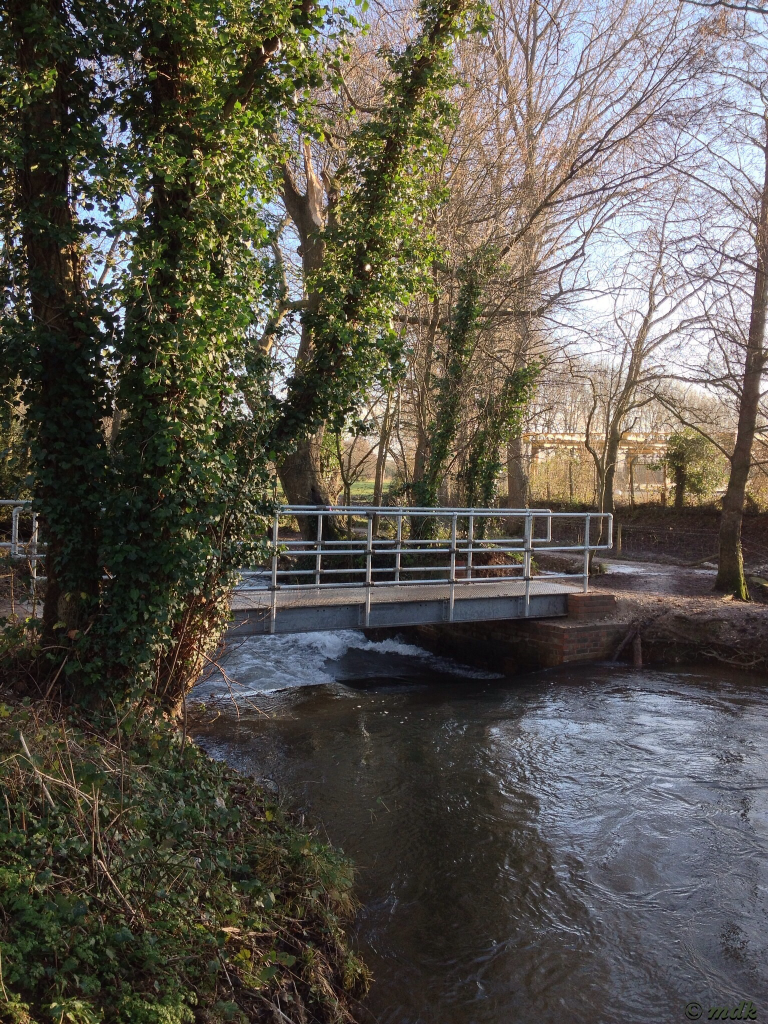 According to Hampshire County Council it was going to cost £70,000 to replace it. Crikey, I could have built a whole house for that, never mind a teeny little bridge. Maybe they were going to build it out of gold. So, the path remained closed and the signs kept changing with later and later dates for the bridge to be repaired. Then a miracle happened. Henry Russell, the farmer who owns High Bridge Farm at Allbrook, stepped in.
“It’s such a well used and important footway that I felt the delay was embarrassing,” he said.
He used the farm facilities to build a wonderful, and more importantly, vandal proof bridge from steel. Just in time for Christmas too! I, for one, applaud his generosity. What a lovey man. 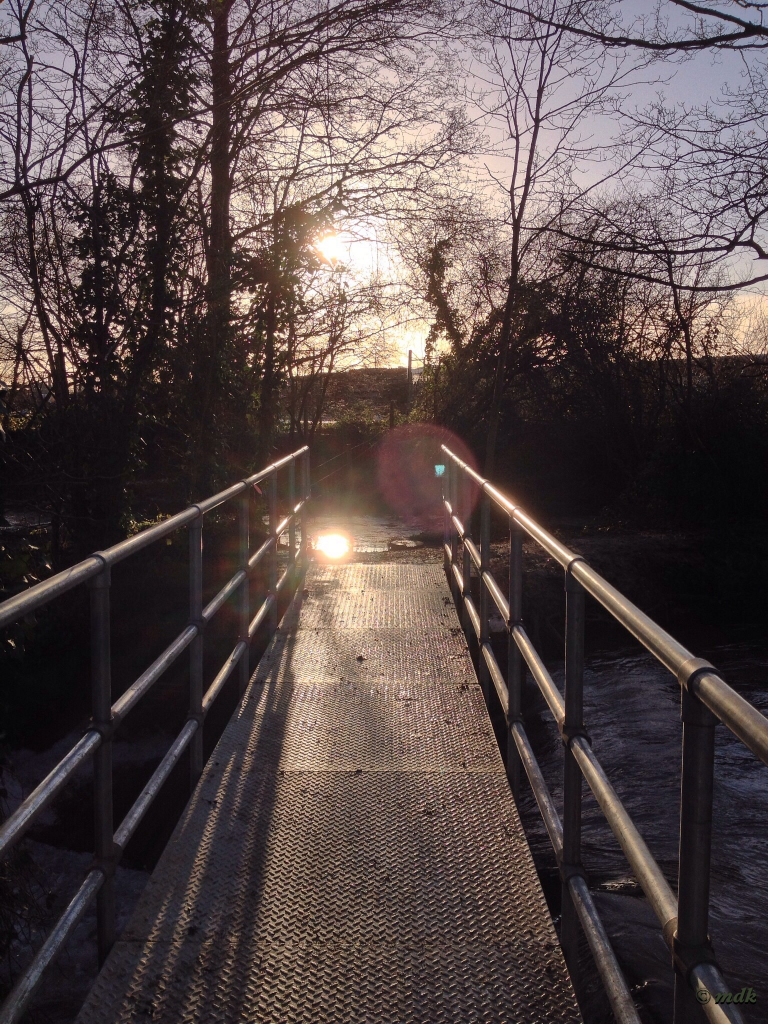 Just after the bridge a small stream runs off to the side, this was used to flood the fields back in the days when these were water meadows. Now the land is part of the railway works so I doubt they’d be too pleased to have it flooded. The canal joins the Itchen just below the bridge and bends sharply several times along this stretch which must have made things hard for the barges, the bargemen and their horses although there’d have been less trees back then. 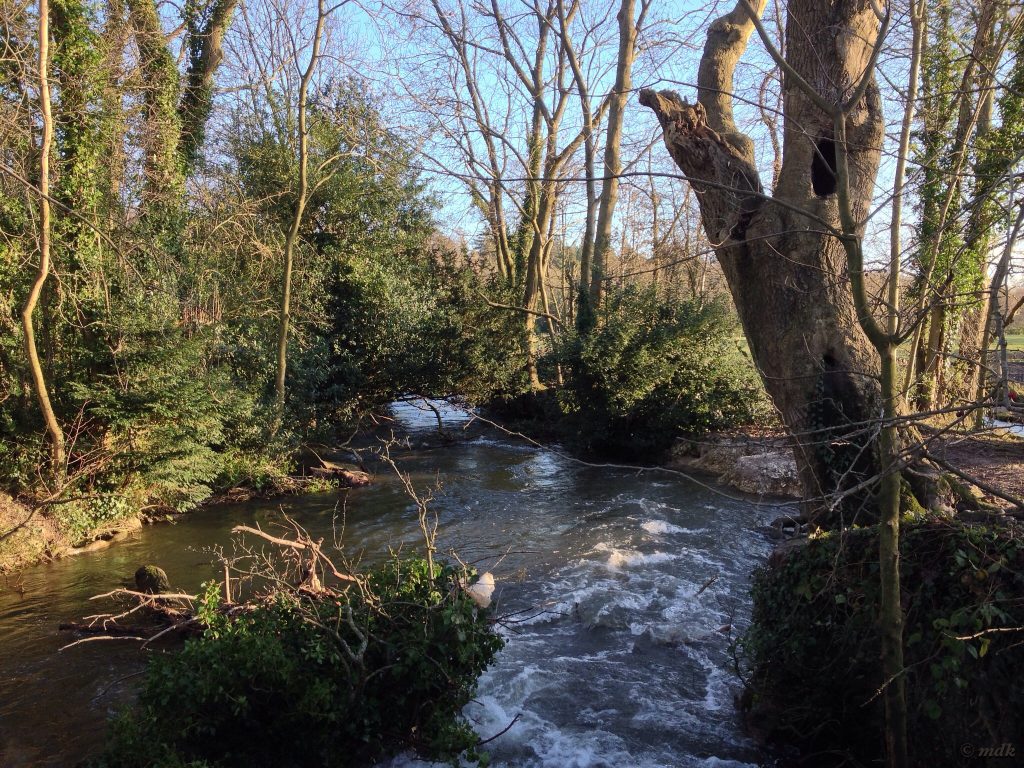 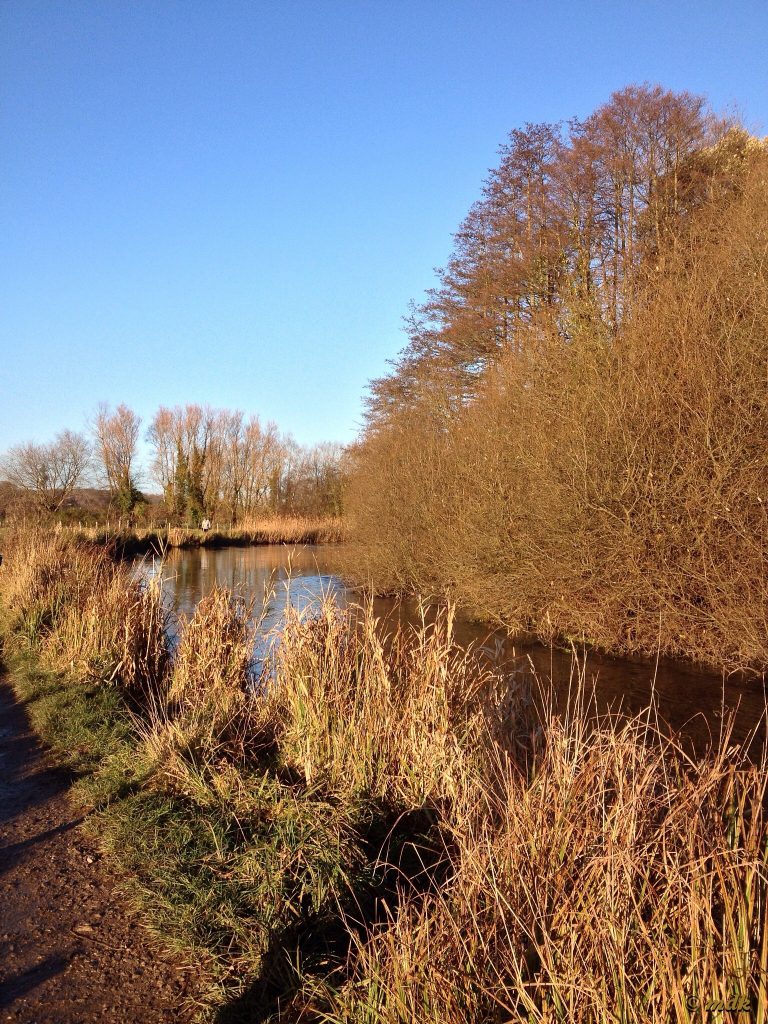 The time was approaching three and I knew I was nearing the end of the trail. A rotten stump beside the water sported some rather impressive fungus. Further on, just before my last bridge of the day, a huge tree had been blown down, the underside of the root ball sticking up from the water’s edge like a wall of dirt. I wonder if it came down during the recent gales? 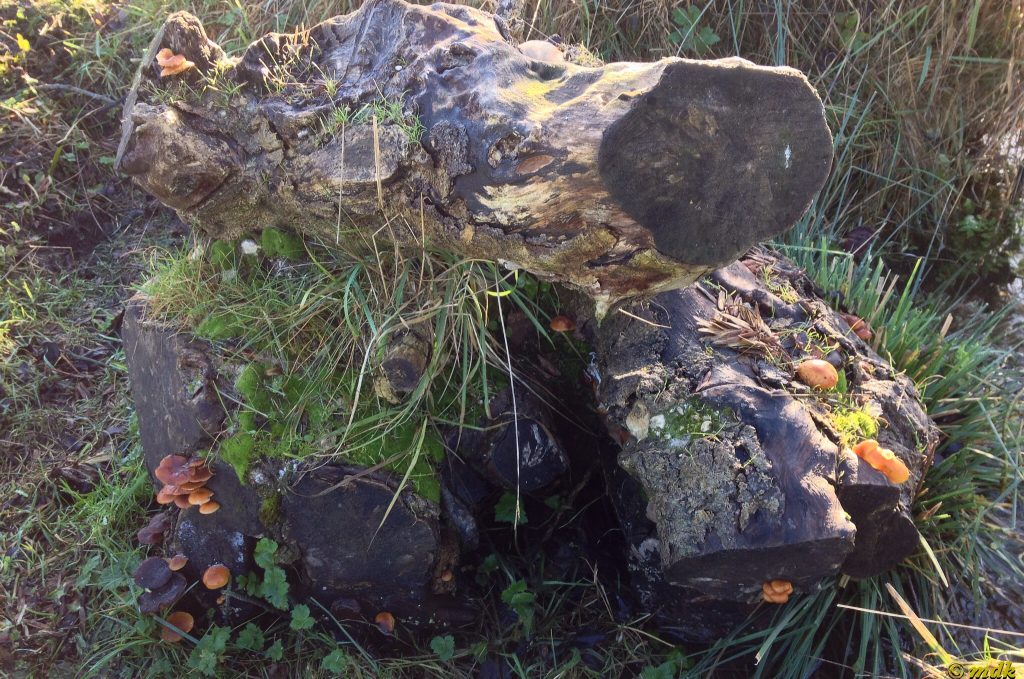 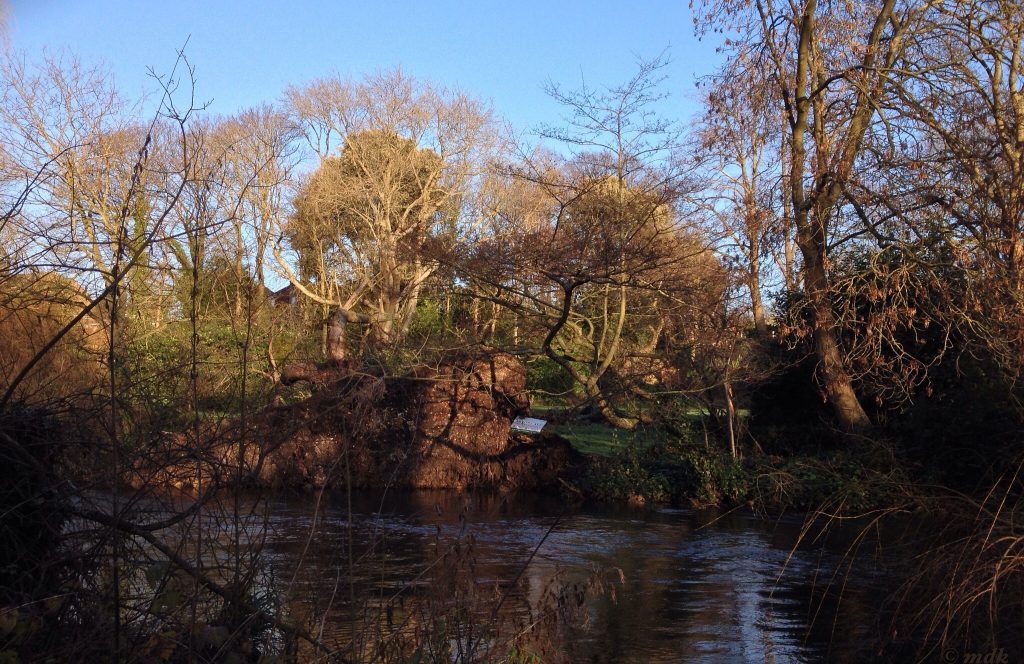 The last bridge I had to cross doesn’t actually cross the Itchen. The Barton River, a side stream, breaks from the Itchen at Bishopstoke and the footpath crosses via a bridge over some sluices, this is Barton Bridge, fairly unimpressive but my last crossing. There used to be a mill powered by Barton River, Barton Pevril Mill. 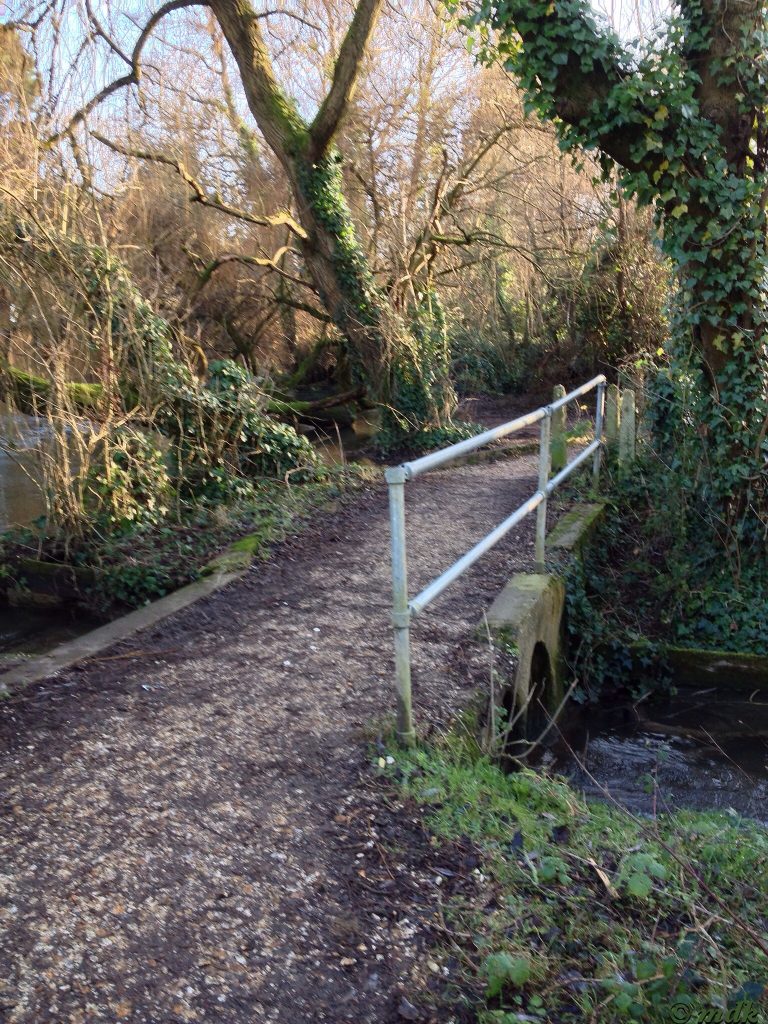 Just after this the Navigation canal and the Itchen divide again and soon I was coming up to Stoke Lock. Sluices and a fish pass cross the head of the lock and a bridge crosses the tail carrying a footpath into the Centre of Bishopstoke but I wasn’t going that way. My route took me along the, now tarmaced, tow path, past the final milestone of the day. 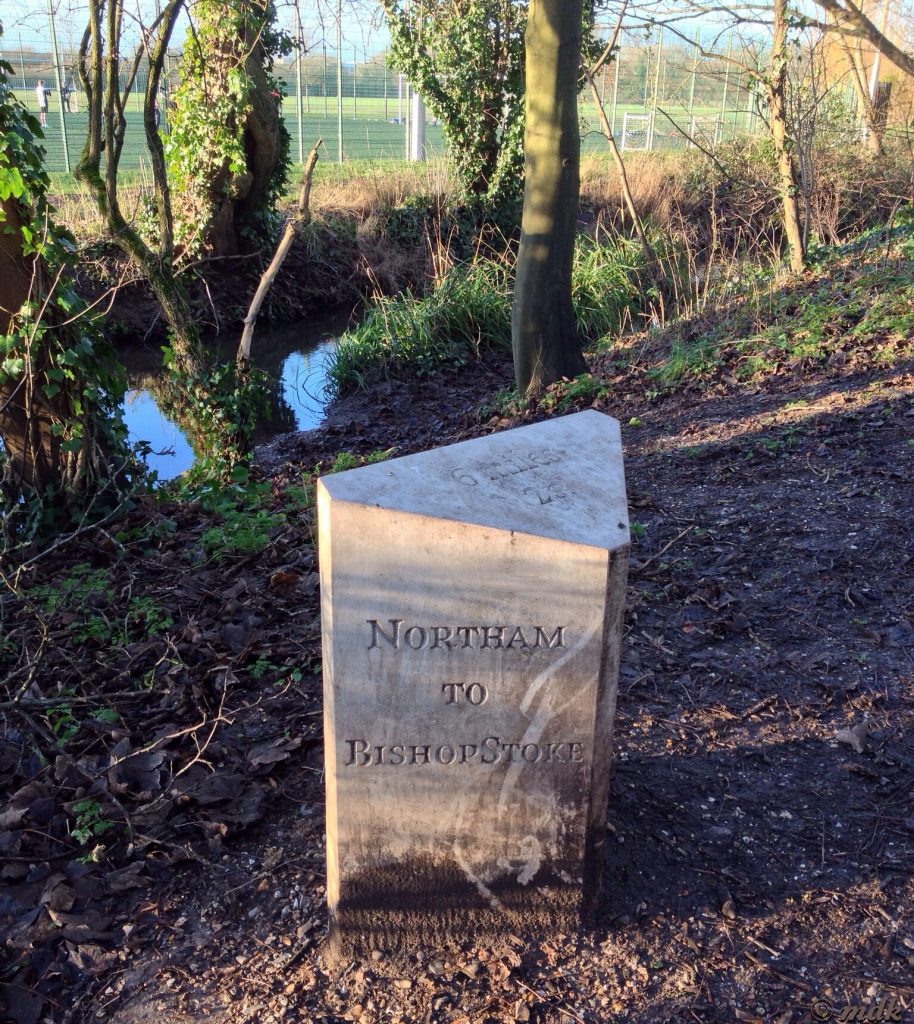 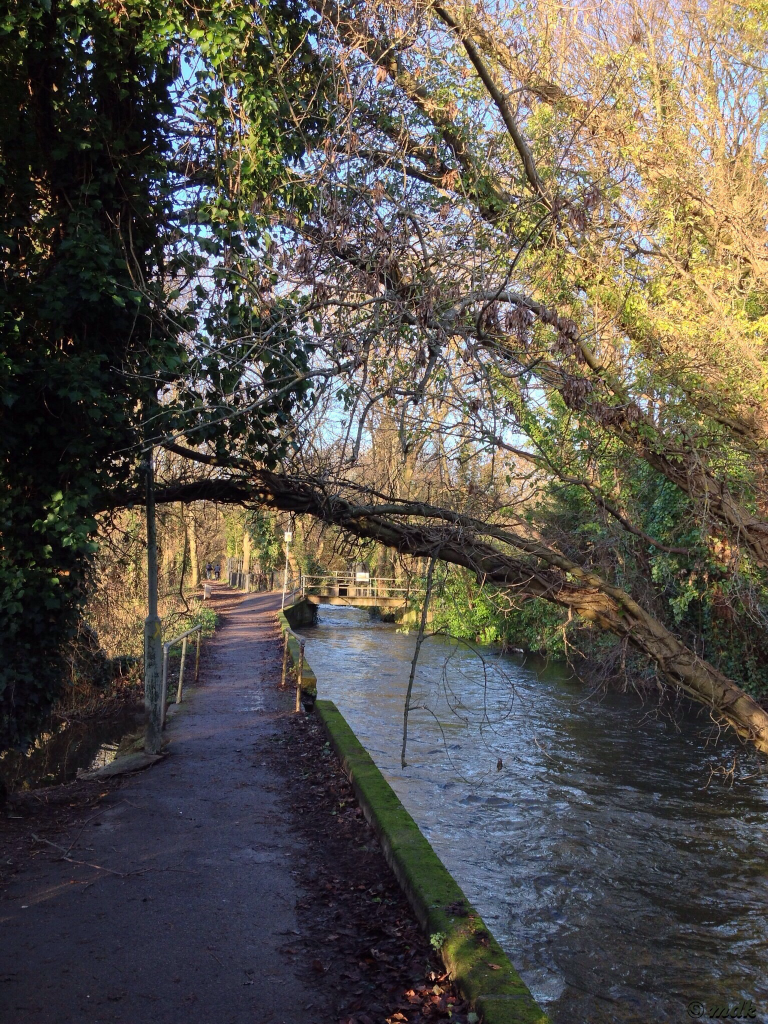 Along this final stretch, the trees bend their branches right across the canal. In one place a large branch has been cut back as it was blocking the path. When I reached Bishopstoke Road it was almost three o’clock, I’d been walking for three and a half hours and was coming up to nine miles. Not a very good pace but I had been walking on frozen ground, mud and through water so I suppose I shouldn’t moan. With one last look back along the path I left the Navigation. 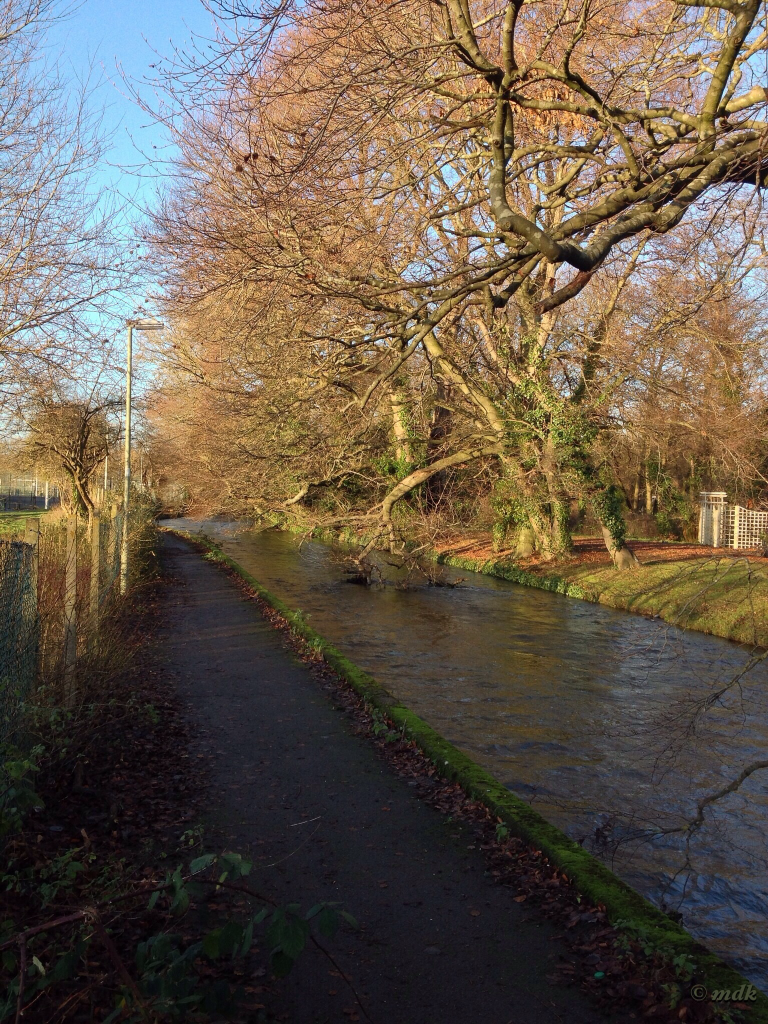 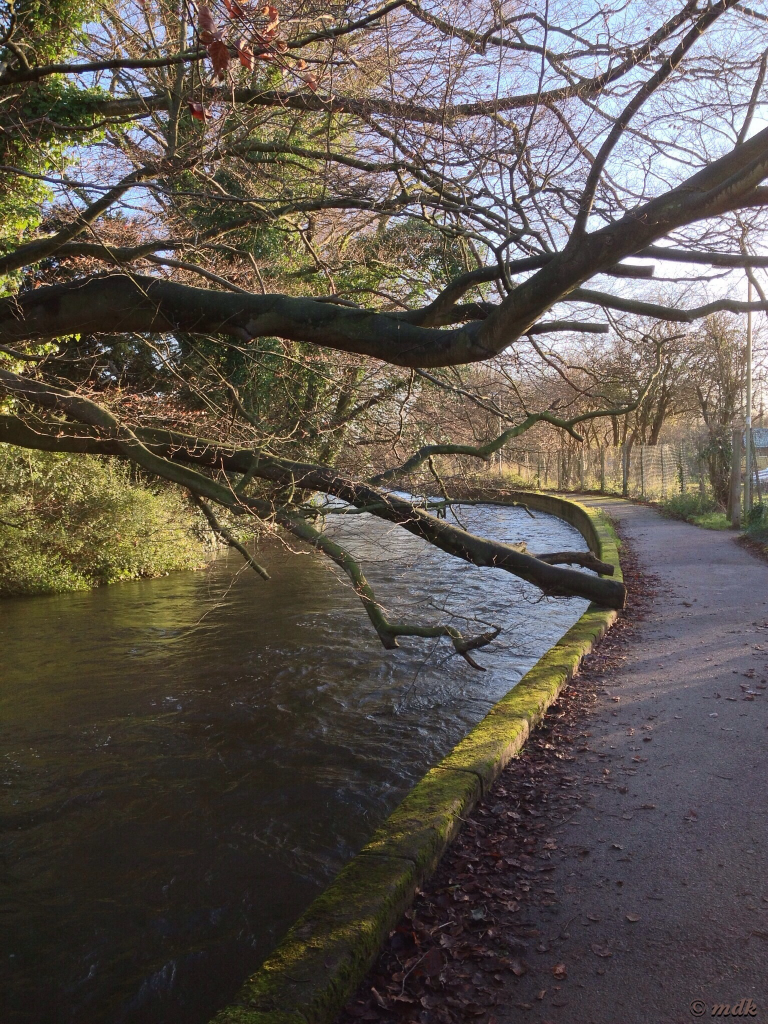 There was just one more thing to do. It took me about five minutes to get across the busy road but I wanted to look down the final stretch of the Navigation, leading home, before I left. I knew I wouldn’t be able to walk it. It was getting dark and it would probably be more flooded and muddy than anything I’d seen so far but I still wanted to look. The sun was going down behind the trees as I left the river for the last time. The last mile of my walk was through Eastleigh to Philo and Sirona’s house where coffee and Commando were waiting. 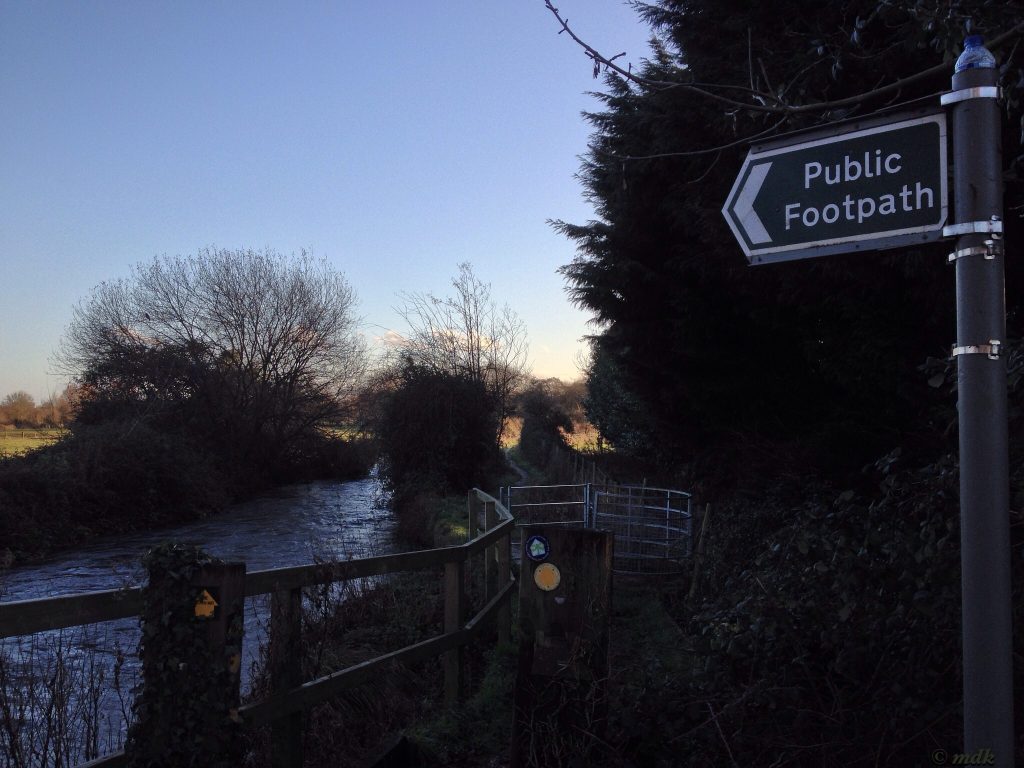 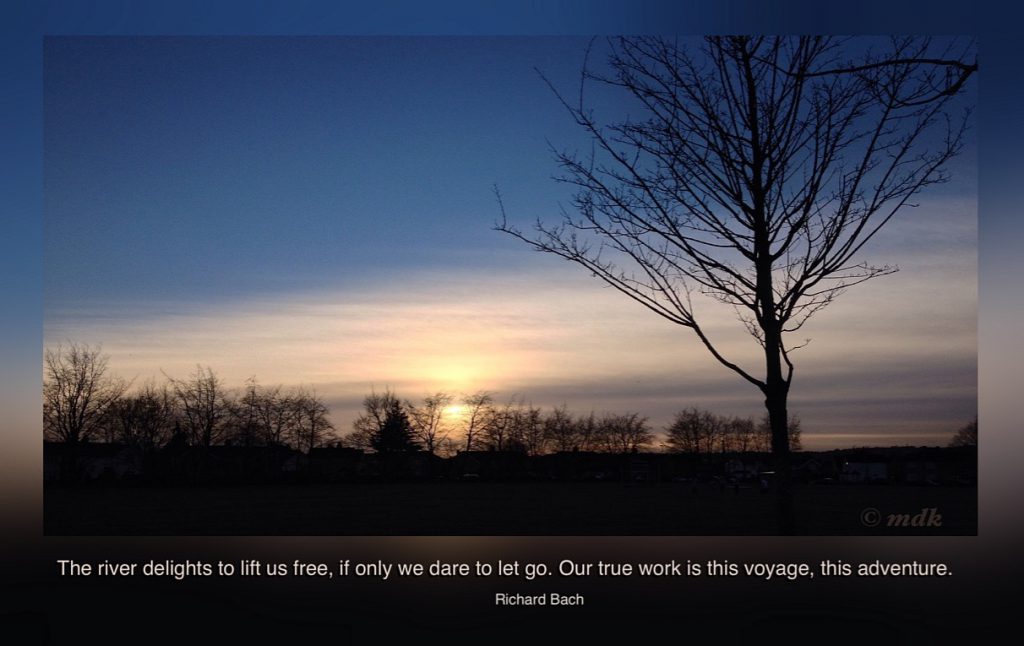