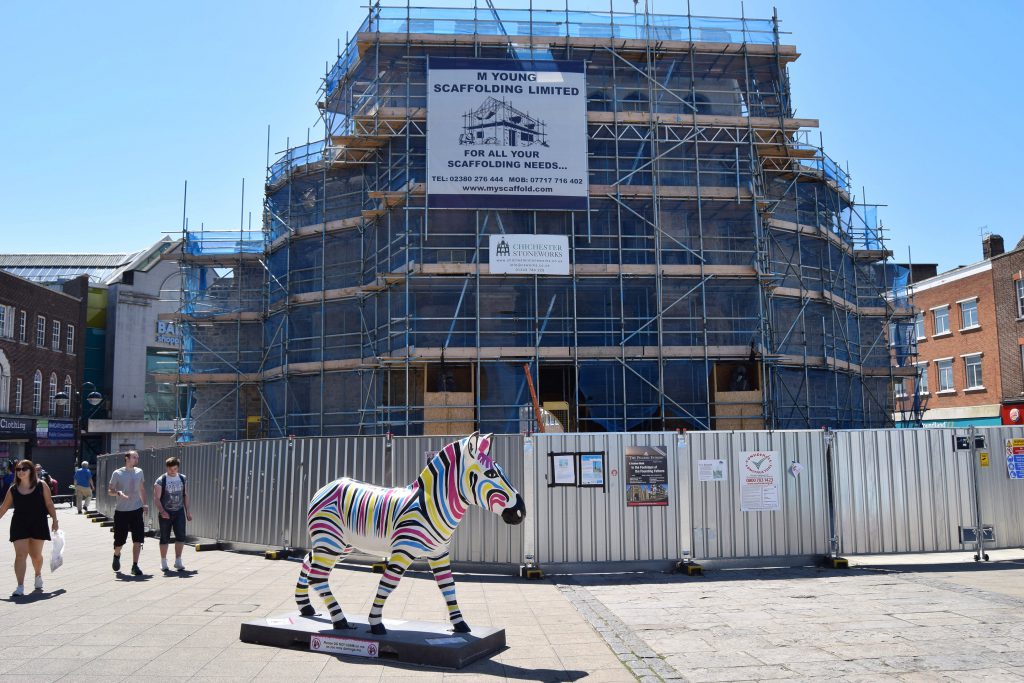 In hindsight the hottest, most humid day of the year wasn’t the best of choices for our first zebra hunt. CJ and I were too excited to wait any longer though and this was the first chance we’d had since the zebras went on display on Saturday. With one hundred and ninety eight zebras on the trail, including all the babies hidden in shops, we knew from the start we weren’t going to find them all in one go. Half way over Northam Bridge, with sweat dripping into my eyes and legs that felt like lead, I wondered if we’d even make it to town to find the first one. It may only have been three miles but, in such weather, it might as well have been a marathon.

Our first port of call, once we’d staggered, gasping through the parks, was Costa. If ever a drink was needed it was then. In fact we passed a couple of zebras on the way but had no energy to stop and look at them. It was so hot even a coffee had no appeal and I plumped for a coffee cooler, Costa’s take on a frappachino. It’s the first one I’ve had this year and it really hit the spot. While we sipped we looked at the trail map and made a plan of sorts. We’d begin with the zebras inside the old walled town.

Feeling slightly better with cool coffee inside us, we left the lovely air conditioned cafe. Going outside the hot air almost knocked us off our feet. Within moments I was wilting again. Luckily we didn’t have far to walk to our first target. We decided we’d officially begin with Gilbert, poster boy for the Zany Zebra Trail, created by artist Laura Schillemore, who also painted rhinos Reveal, Beatrix and baby rhino Ruby on the original Go Rhinos trail.

Gilbert was the zebra who got stolen back in May and, when we reached him, we were pleased to see his pink, blue, yellow and black zebra stripes were unscathed by his adventures. He was standing outside the Bargate, the main entrance to the medieval walled town. In medieval times he’d have been outside the town looking over fields. Today he was looking at the busy Above Bar precinct towards WestQuay and the wonderful gate behind him was hidden by scaffolding. 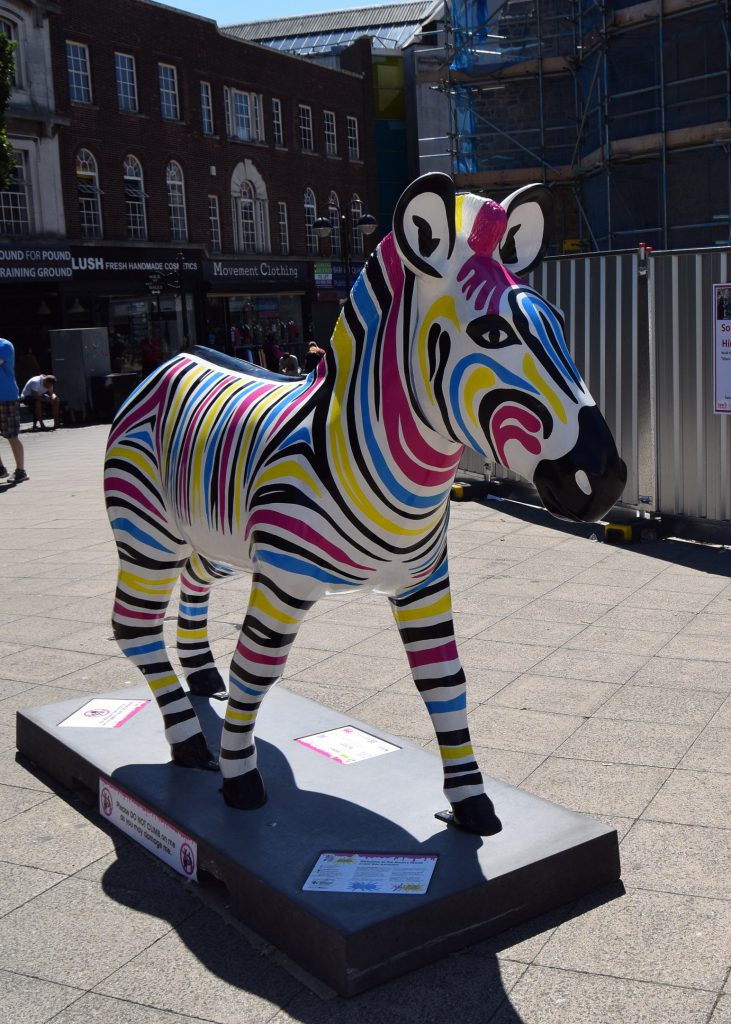 Last time, when Kyma and Mrs Hearty Rhinos stood on either side of Bargate, I’d been able to walk through the arch between the two. This time we had to walk around the outside. On the way we popped our heads into Mettricks Cafe to see our first baby zebra, William, designed by Wordsworth Primary school. William was sporting a school jumper, a daffodil, the school emblem, and was covered in colourful puzzle pieces. 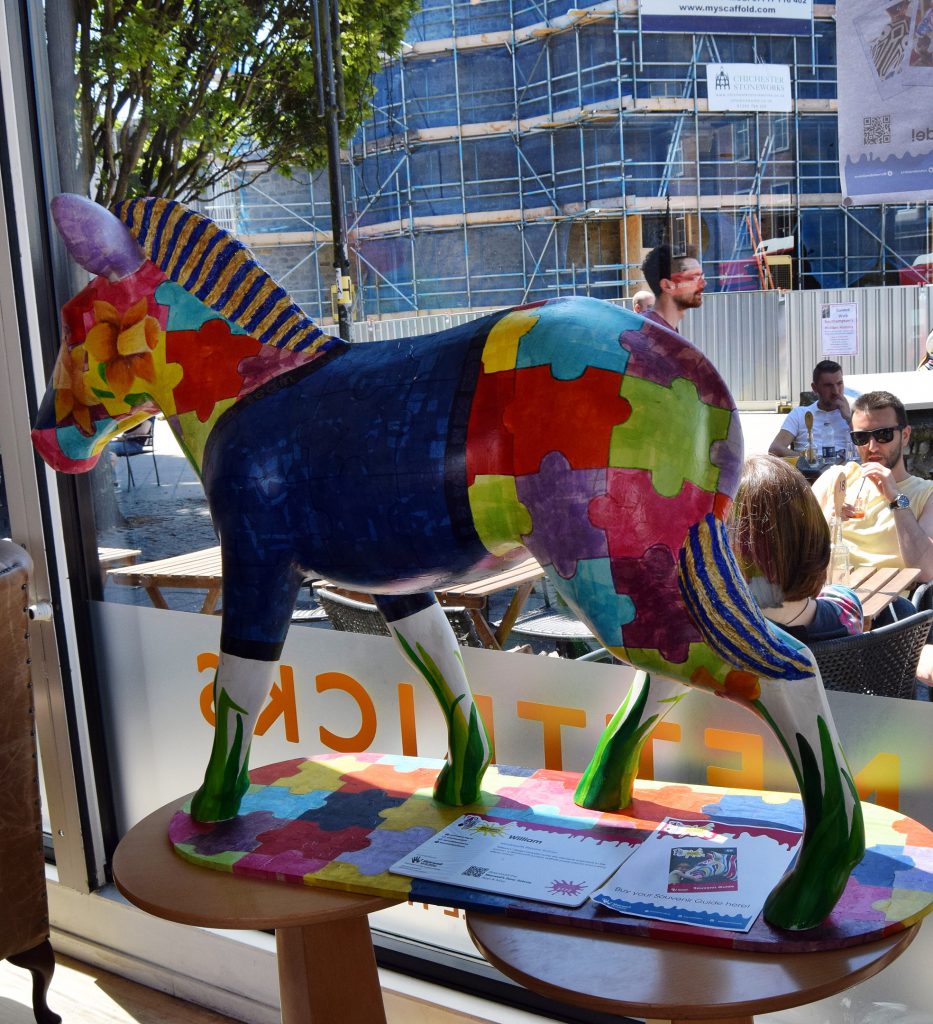 We’d only just had a coffe so we carried on around the corner to find Goodmane, the legal zebra designed by Norfolk based mural designer and graffiti spray artist, Mik Richardson for solicitors Warner Goodman. With his curly judge’s wig, cloak and glasses he was a stern looking chap. Once the rooms above Bargate were used as a prison and a police station so a judicial zebra was fairly apt. Luckily, we were on the right side of the law. We were also now inside the old walled town and the back side of Baragate was mostly scaffolding free. 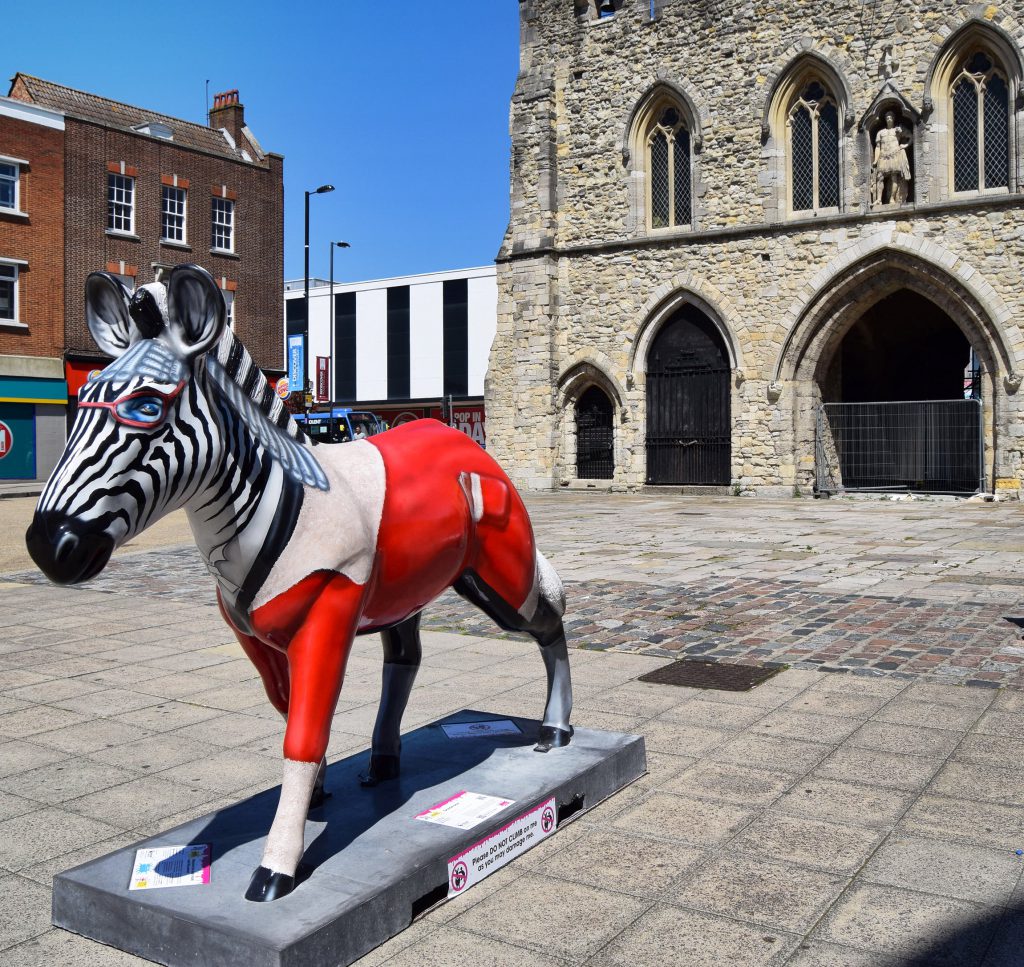 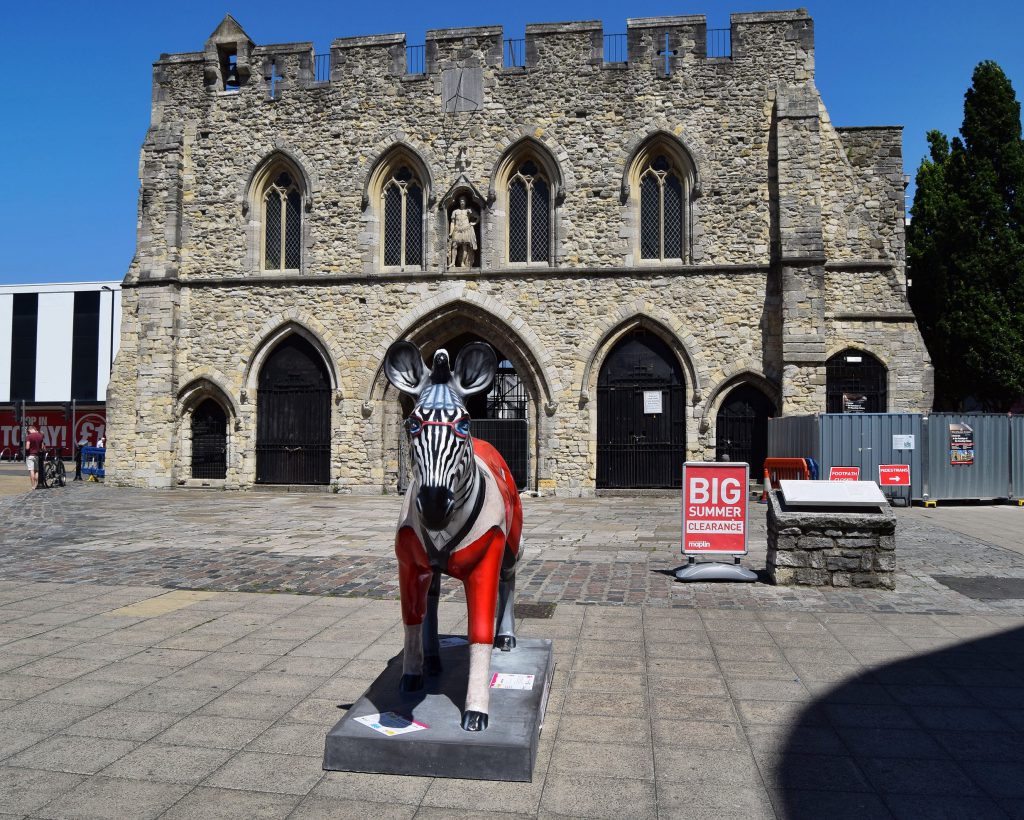 The next zebras were babies and they came en mass. They were hiding in two shops on the High Street side by side. The clever app on my phone told me where they were but, even without it I might have guessed because both shops had baby rhinos back in 2013. In fact, Africa Inspired, the zebra in the window of Biltong and Bangers was almost the twin of African Sunset, the baby rhino they had last time. This time the fancy camera made a better job of getting a photo in the dark shop. This lovely baby rhino, painted in the Reds and golds of sunset with tribal tatto stripes, was sponsored by Wyvern College, where we were last weekend for the 10k. 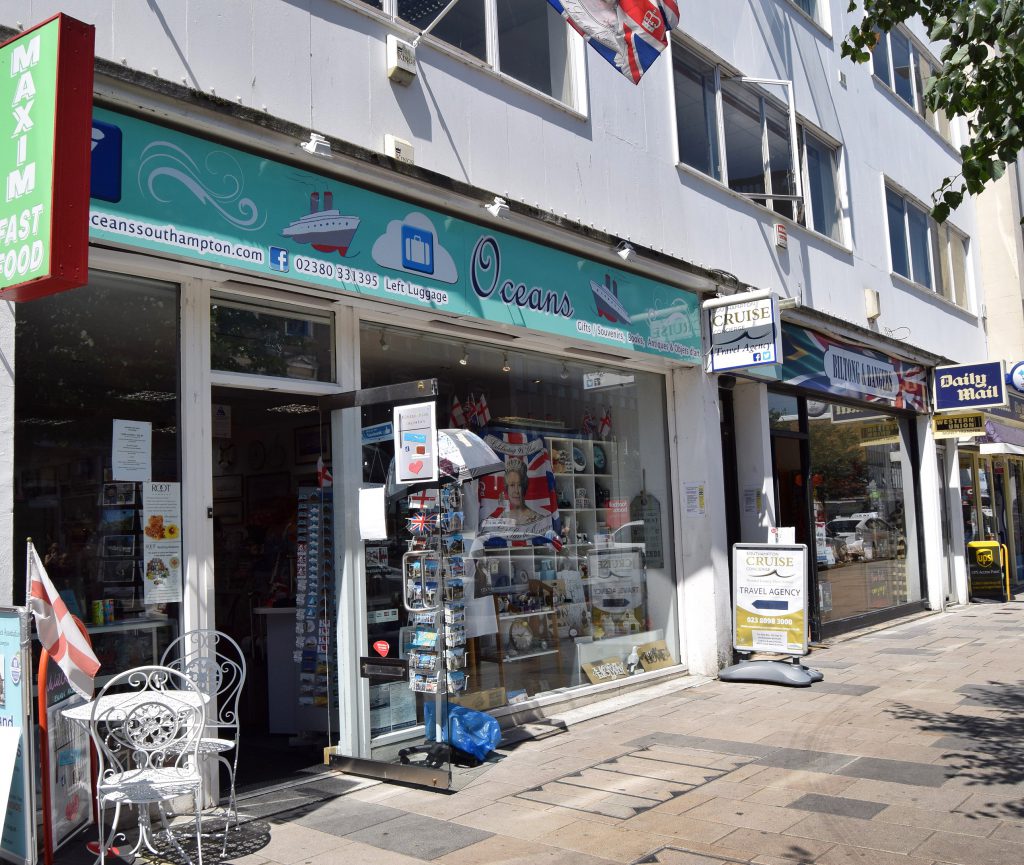 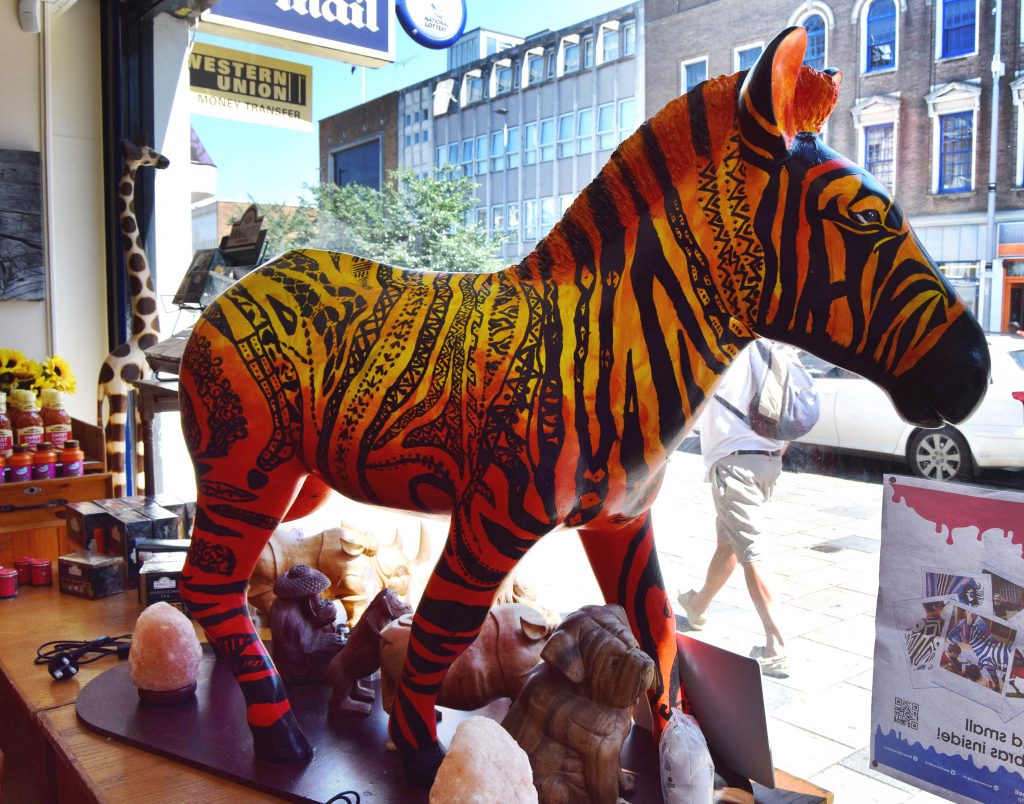 Next door, in Oceans, which has relocated from the other side of the High Street since last time, we found not one, but two babies. We spotted Eddie right away. He was just inside the door. His spots, stripes, patterns and hidden animals was a combination of twenty designs selected in a competition by Saint Edmunds Catholic School. 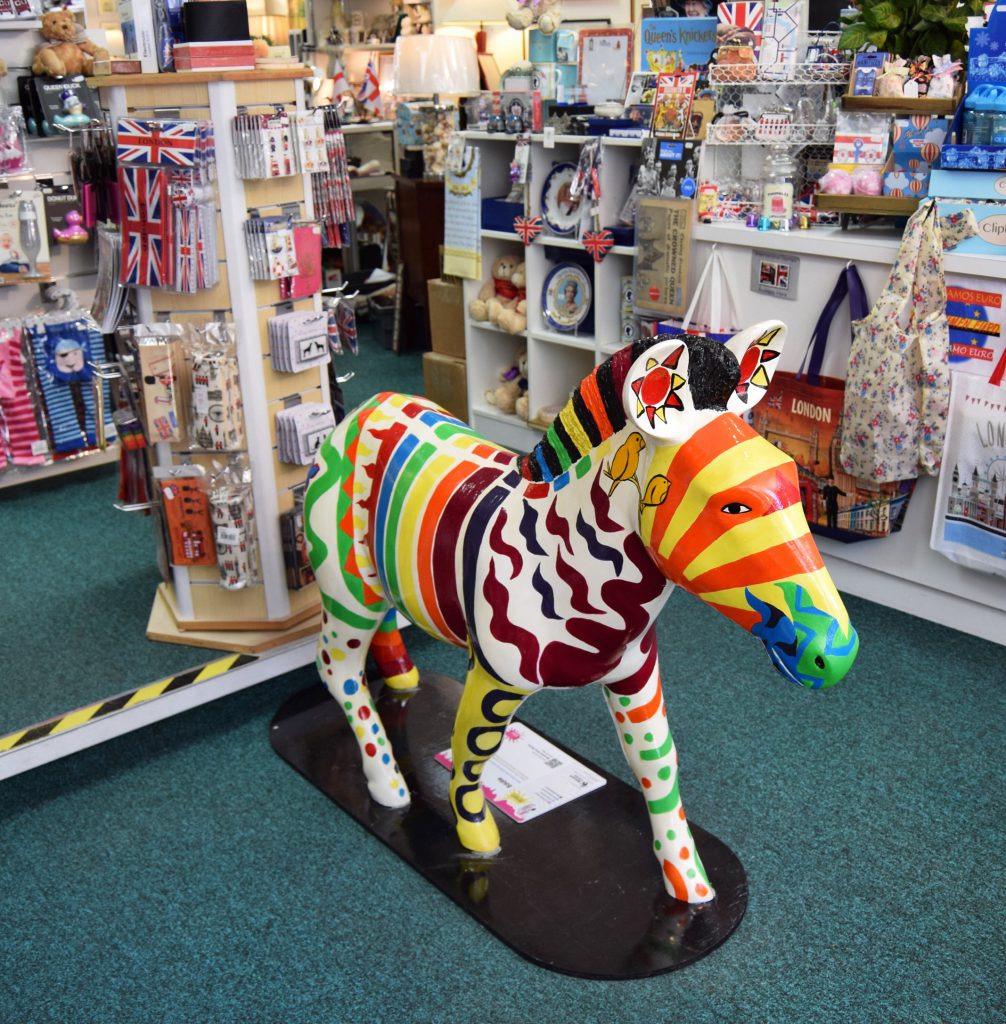 We might have missed Seabra, designed by nine year old Maddy Beecheno of Freegrounds Junior School if the kind shopkeeper hadn’t directed us. He, or maybe she, was hidden further back in the Aladdin’s cave of a shop.  Seabra is positively bursting with sea creatures, fish, crabs, turtles, sea horses and jellyfish. We spent a while finding them all. 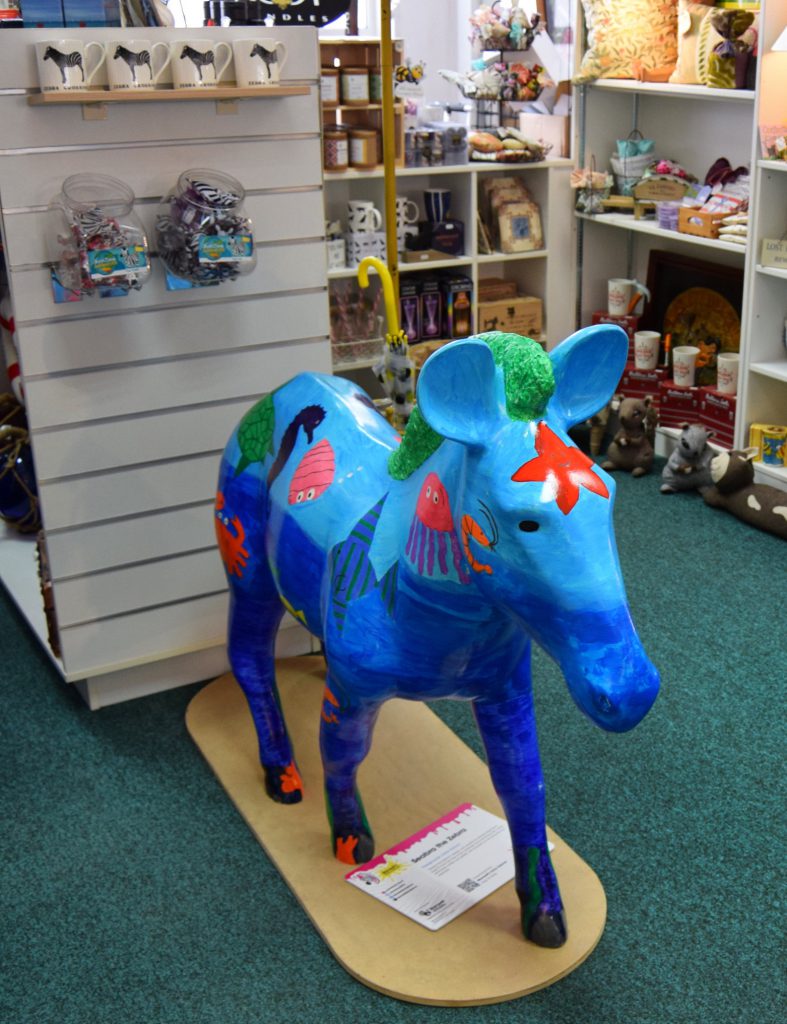 With more time and money we might have spent a lot of both in each of these wonderful shops. They both have lots of interesting things on display. There were more zebra to hunt though so, feeling a little guilty to have visited without buying, we dragged ourselves away.

Our next stop was also on the High Street, this time at the Dolphin Hotel where there was another baby zebra. The Dolphin is the oldest hotel in Southampton, dating back to at least 1454. In the seventeenth century this was a famous coaching inn and, after admiring the Georgian bow windows, said to be the biggest in England, we walked through the archway where coaches would once have driven. 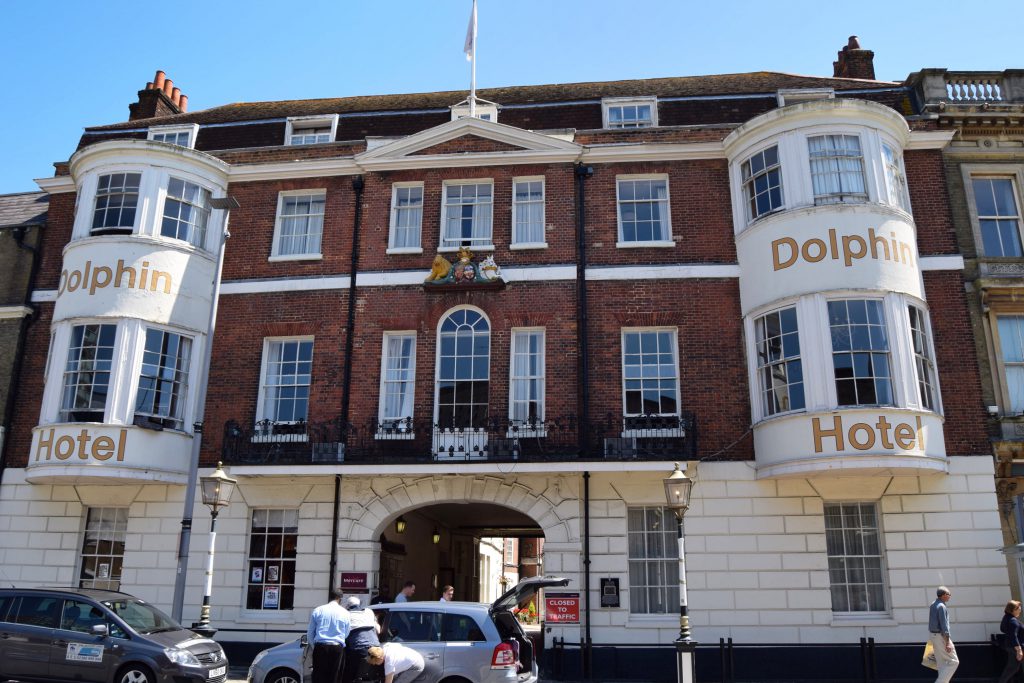 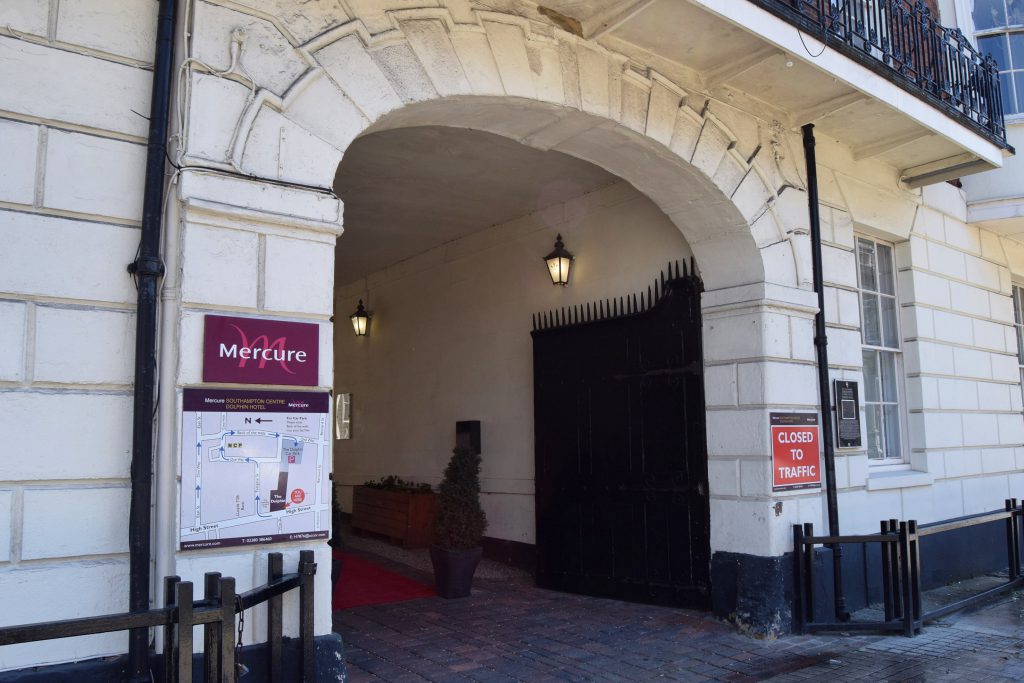 This was not my first visit to the Dolphin. I’ve attended a few meetings there in my time and, a few years back, I even went there for an interview for a job with an estate agent. There have been rather a lot of famous guests over the years, notably Queen Victoria, Lord Nelson and Jane Austin who danced the night away there on her eighteenth birthday. Quite what they’d have made of Zebedee, the Lydlynch Infant School zebra is anyone’s guess. He certainly warrants a close look though as his multicoloured pointillist stripes are actually made up of  fingerprints from all the children, staff and governors of the school. What a lovely idea. 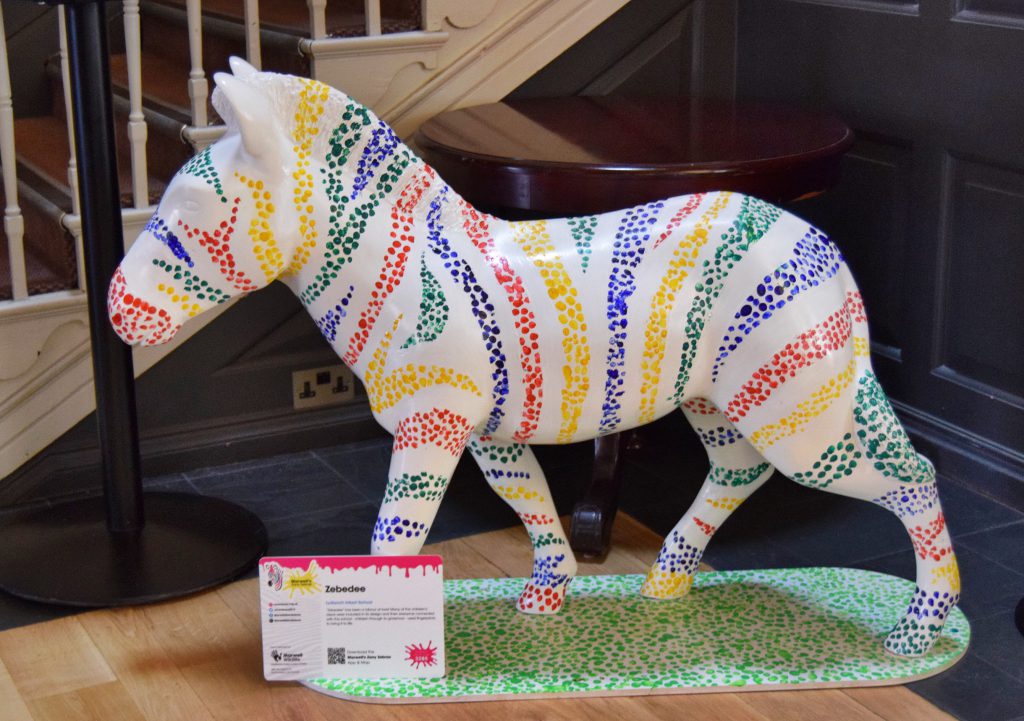 With Zebedee ticked off our list we went back out into the baking heat. Sadly we didn’t get to see Molly, the resident ghost who is said to glide around the ground floor, the bottom half of her legs hidden beneath the modern day floorboards which are higher than they were when she was alive. Anyone who wants to know more of Molly’s story can find it on my post about Southampton’s ghostly past so I shan’t repeat it now. 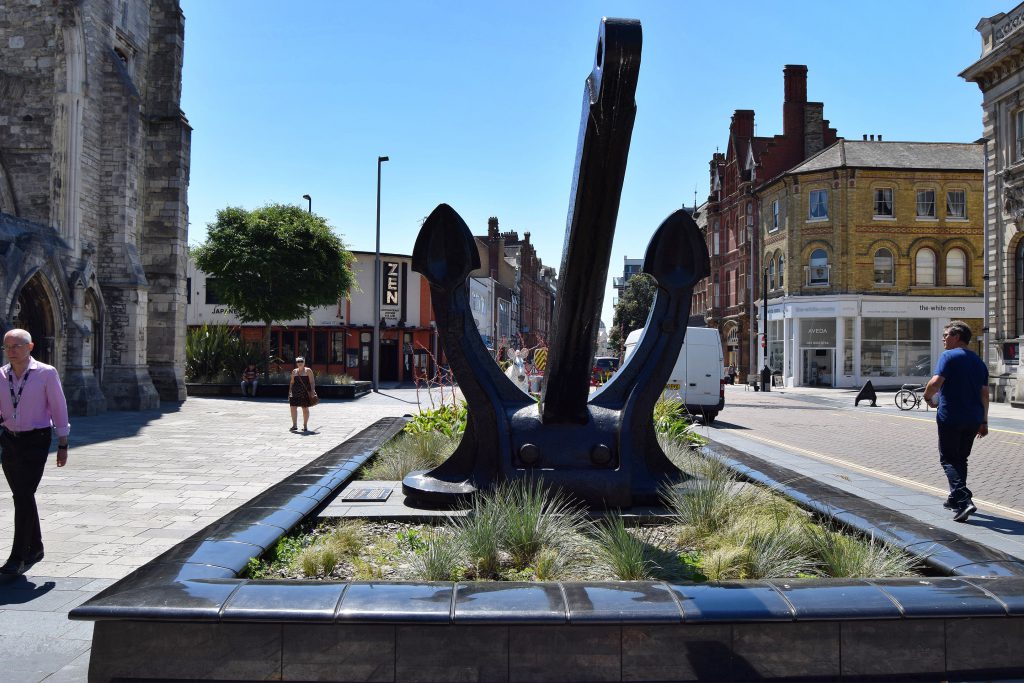 Our next zebra was standing outside another of the city’s historic buildings, Holyrood Church. We spotted him hiding behind the mammoth QE2 anchor in front of the ruined church. Built in 1320, this was one of the five original churches within the town walls. Sadly, on 30 November 1940, it was one of many casualties of the Southampton blitz. Eight hundred high explosive bombs and nine thousand incendiaries were dropped on the town that night. The High Street was devastated and both Holyrood and St Mary’s churches were left in ruins. When the bombers returned the next night the fires were still burning. The ruins were left as a memorial to those who lost their lives and, in 1957, the shell of the church was dedicated as a memorial to lost merchant seamen. 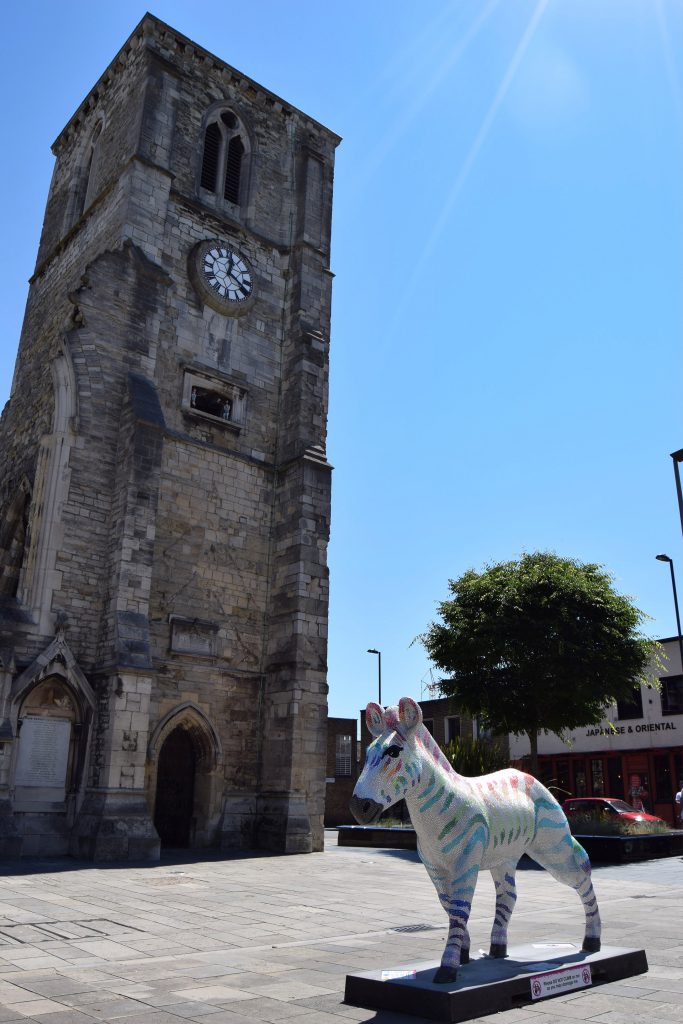 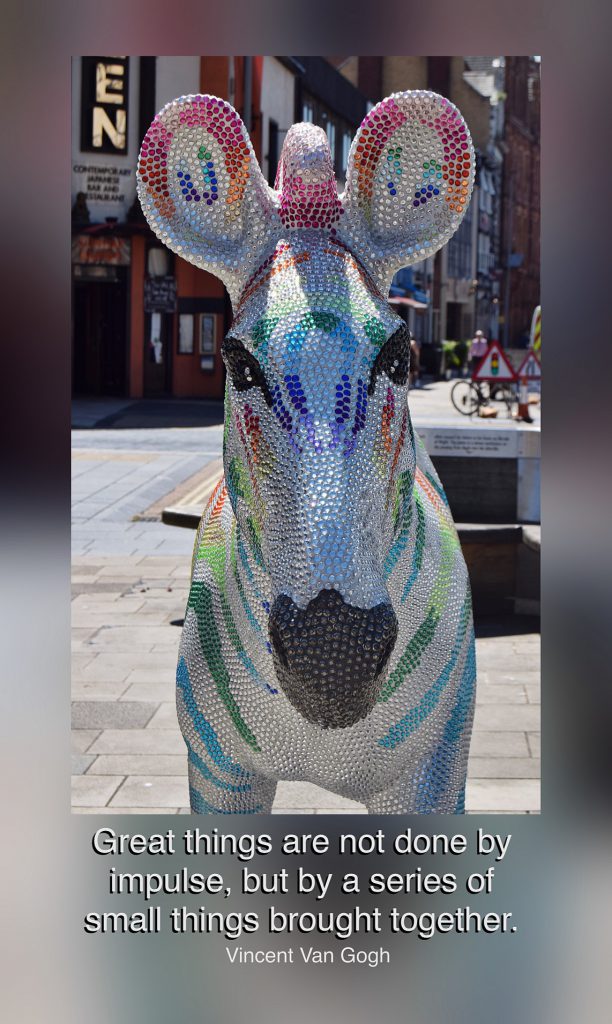 Soonsored by Destination Southampton, the zebra was Crystal, a sparkling beauty with rainbow stripes. Tory Allen designed this shimmering beast and, in the bright sunlight she really was a sight to behold. Once we ticked her off our list I took a quick peek through the doors of the ruined church, just in case there was a baby hiding in there somewhere. There wasn’t, but it was worth a look anyway. Then we crossed the road, and with one look back at Crystal, left the High Street and headed towards St Michael’s Square. 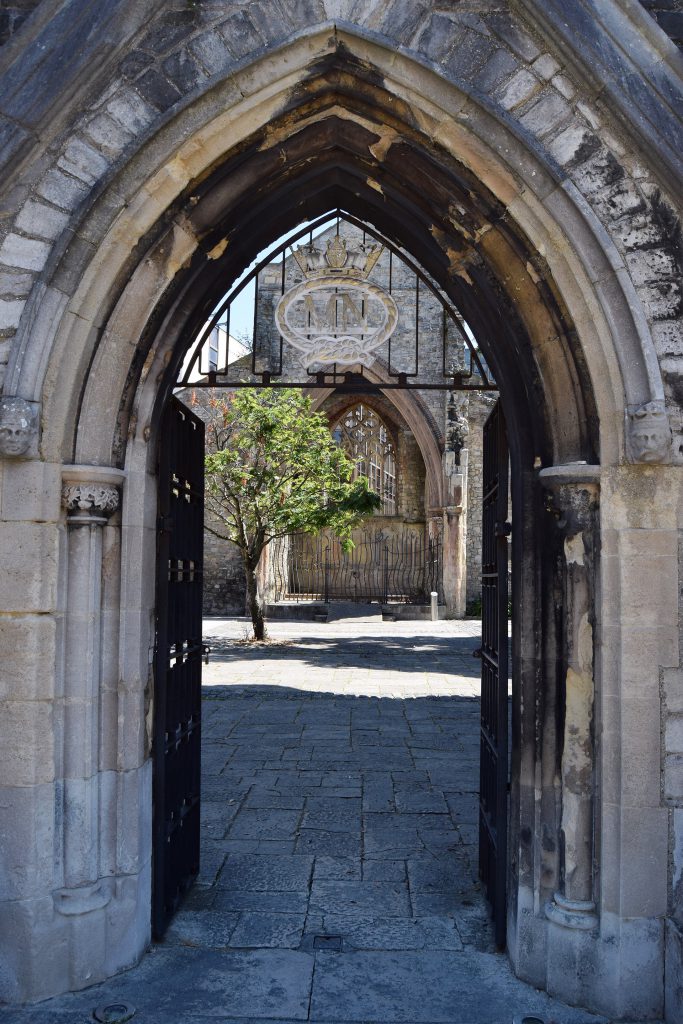 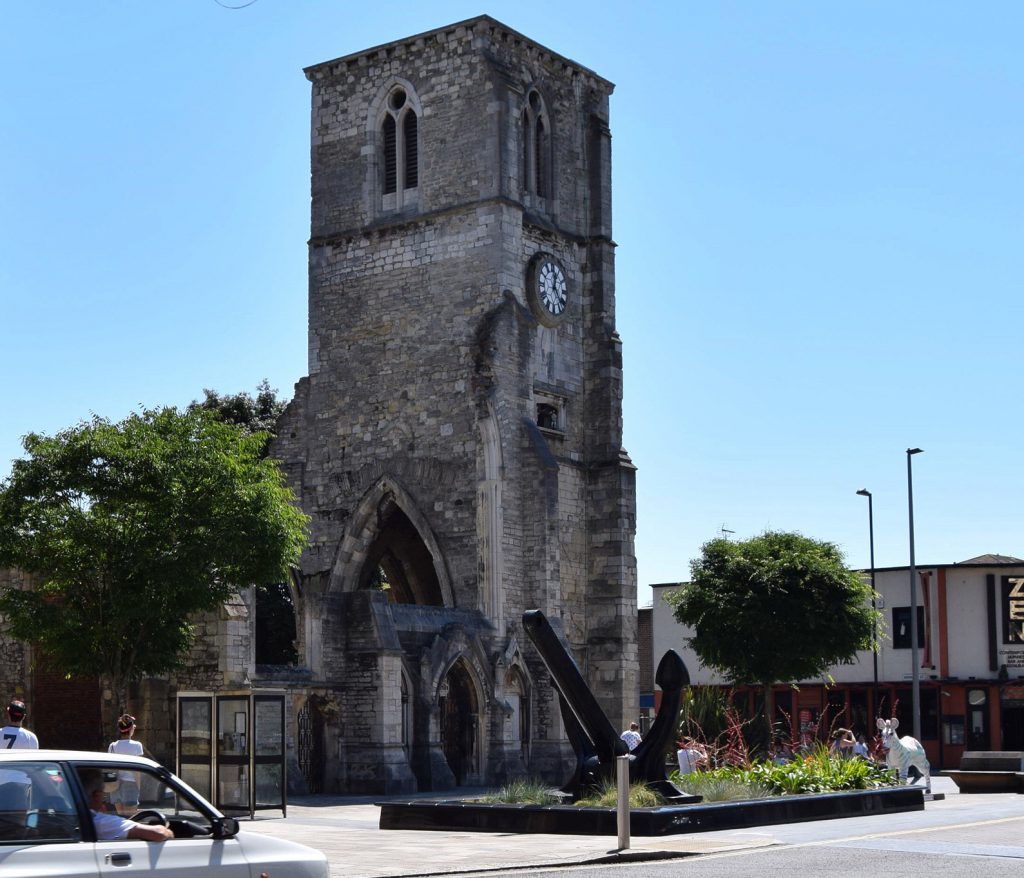 Our next zebra was, according to the trail map, outside another church, St Michaels, the only church of the five original city churches still being used as a place of worship. The building dates from 1070 and was originally cruciform.  The tall, slender spire is the real wonder of this church though and also its saviour. Added in the fifteenth century, it was rebuilt in 1732 and, in 1887, a further nine feet was added to make it a better landmark for shipping. This 165ft spire also acted as a landmark for German bomber pilots during World War II and this was why the church was spared during the terrible blitz of November 1940. Last June we were lucky enough to have a wander round inside. 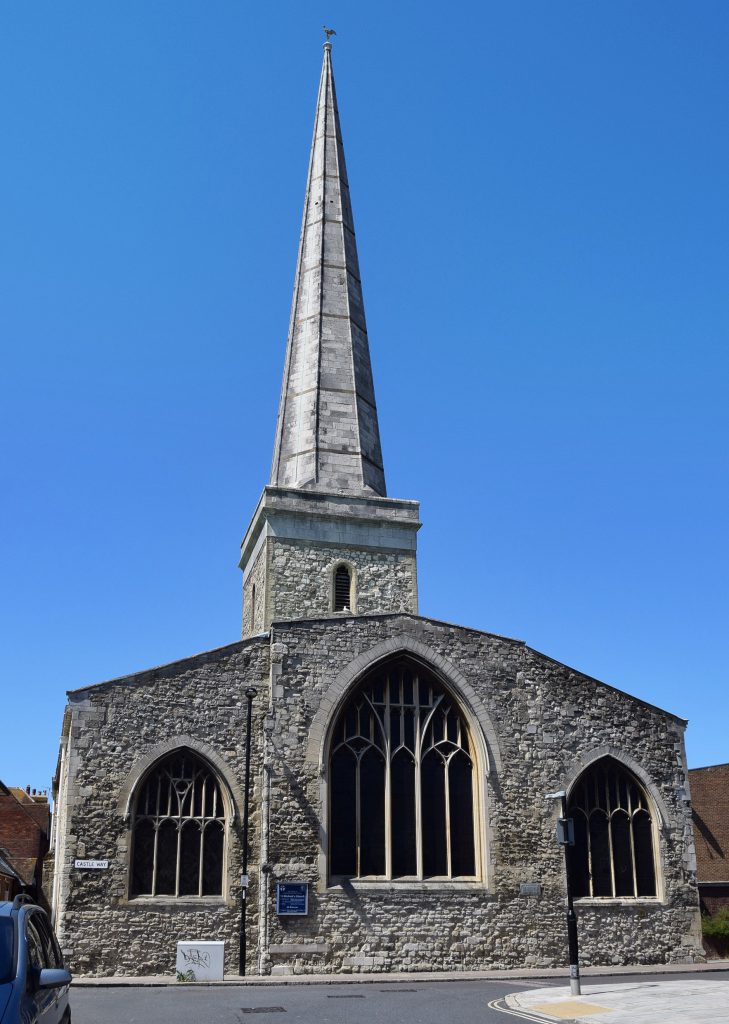 We walked through the alleyway beside the church, grateful for a little shade and respite from the thirty degree heat. Out in the square, sandwiched between Tudor House and the church, we found Carpe Diem basking in the sun. This zebra, sponsored by Renaissance Interiors and designed by Jasen Barker is a lovely summer turquoise colour with a watery theme of koi carp and water plants in a pattern reminiscent of Paisley. 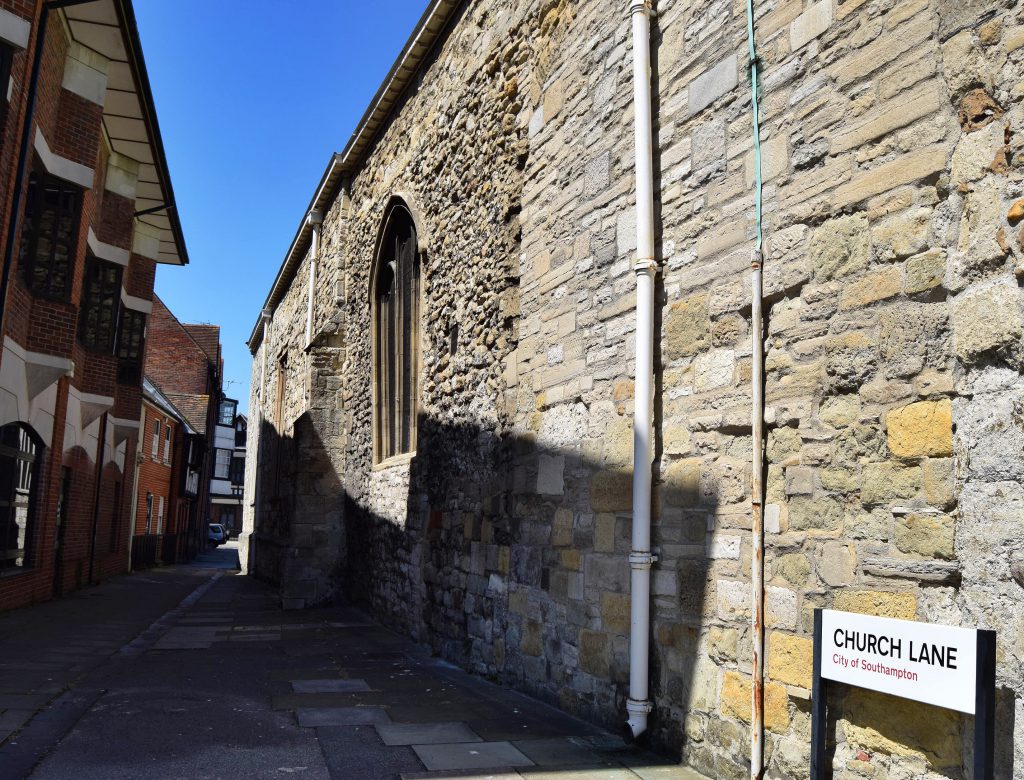 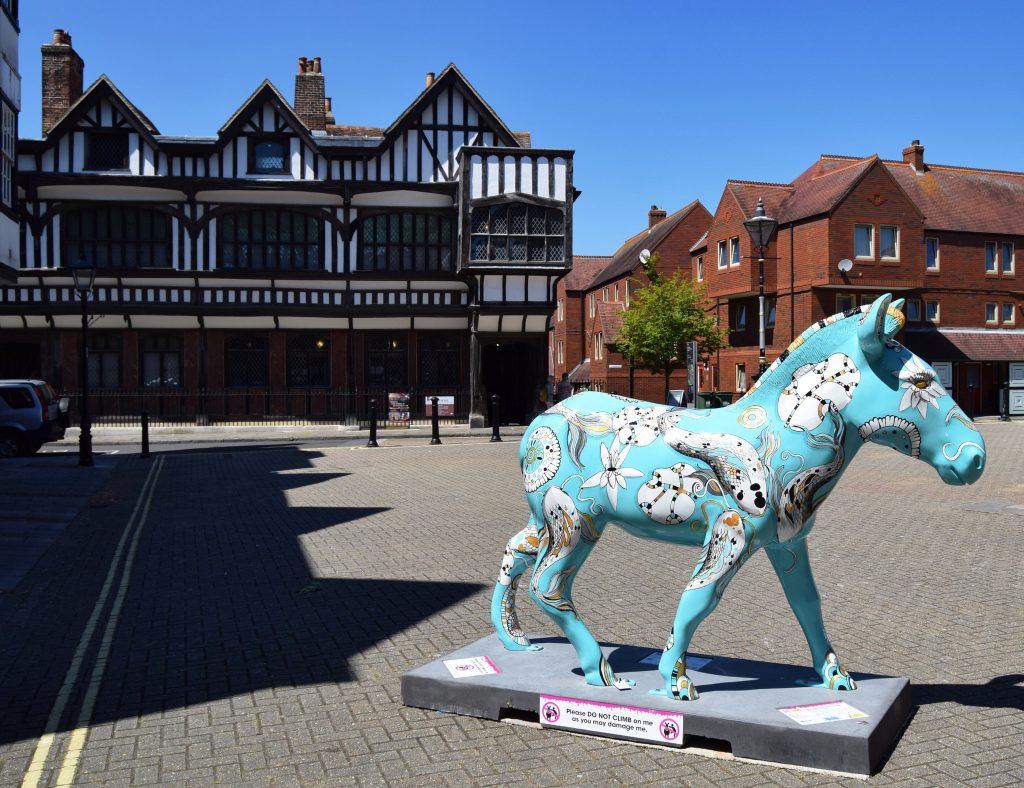 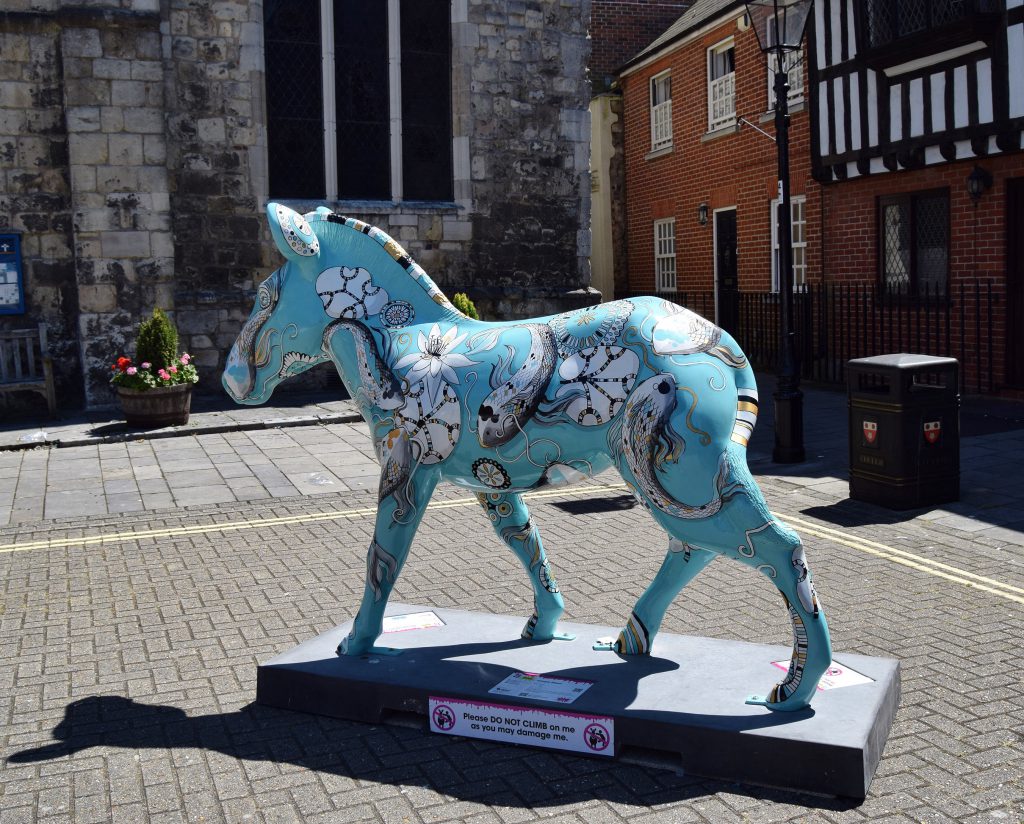 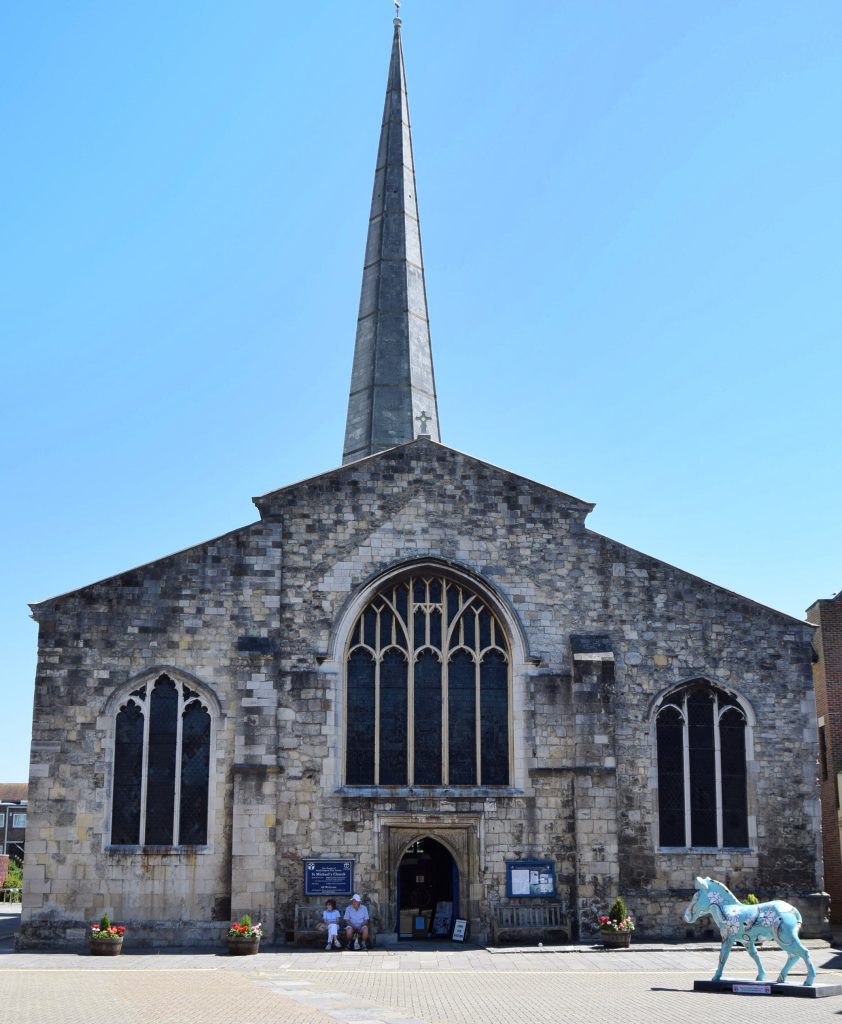 Our next zebra was nearby. Although the map showed two more babies at the bottom of the High Street, this would be the last within the city walls, at least for today. Zippy was inside Tudor House, opened in 1912 as Southampton’s first museum. The house, or parts of it, date back to the 1180’s and it has a long and interesting history, along with a ghost or two. To learn more read about my first visit back in 2013 when I was hunting baby rhinos.

We found Zippy almost at once, standing in the fireplace in the reception area. This was vaguely disappointing because I’d half hoped we’d have to wander around the wonderful gardens. Designed by the children of Wildern School, he has wonderfully colourful patterned stripes on his rear end to complement his more usual monochrome front half. 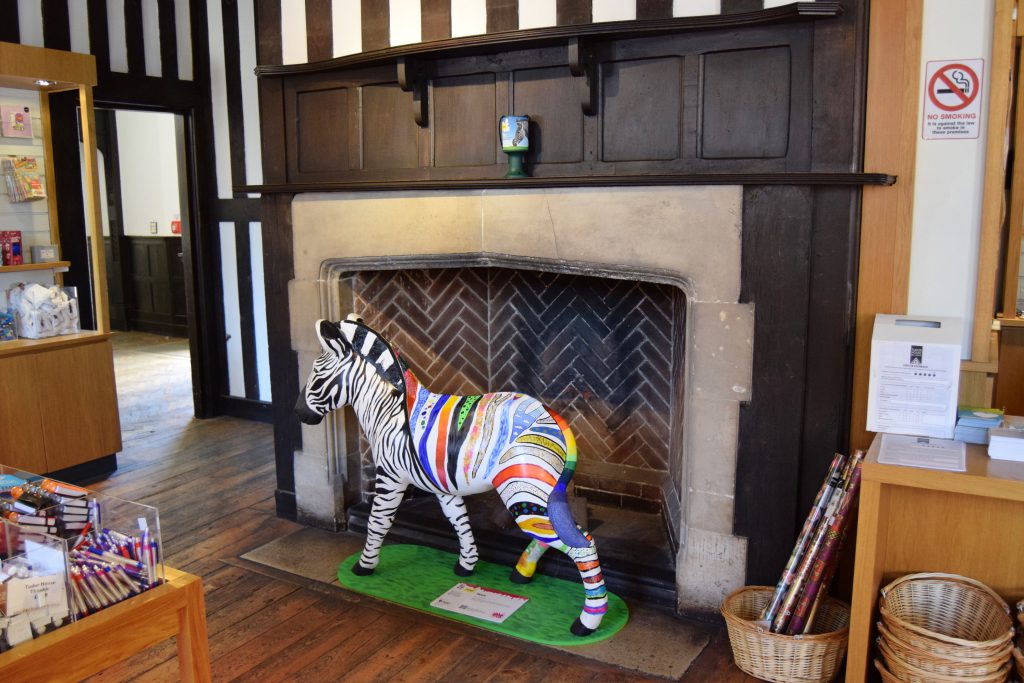 As we turned to leave we got a sneak reprise of Carpe Diem through the leaded glass of the ancient building. Then it was off down Blue Anchor Lane to make a start on the Walk the Walls zebras… 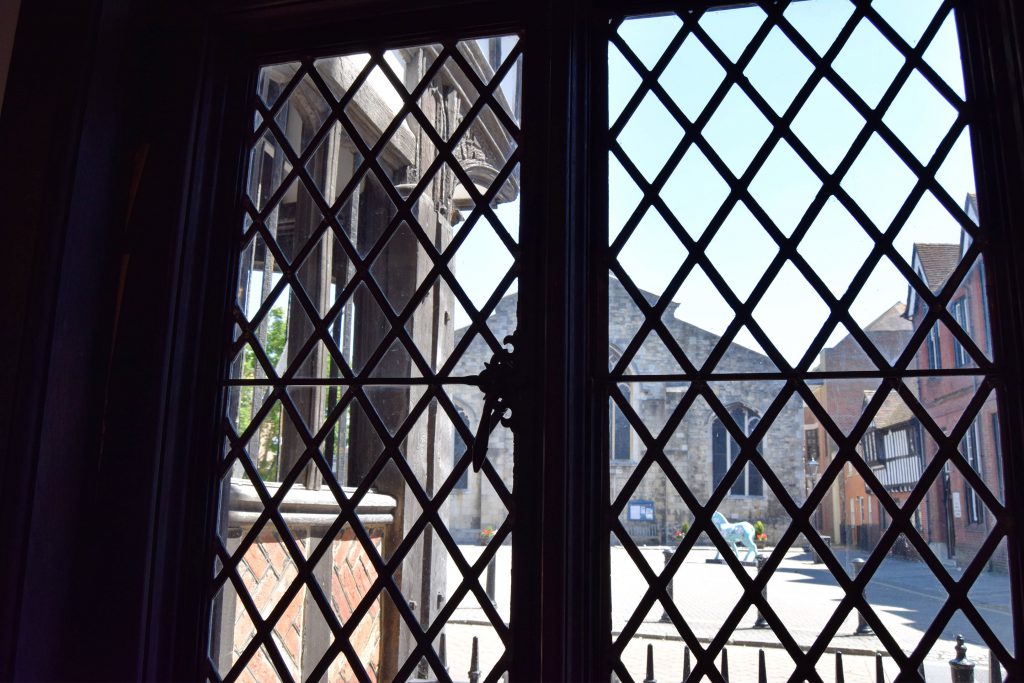 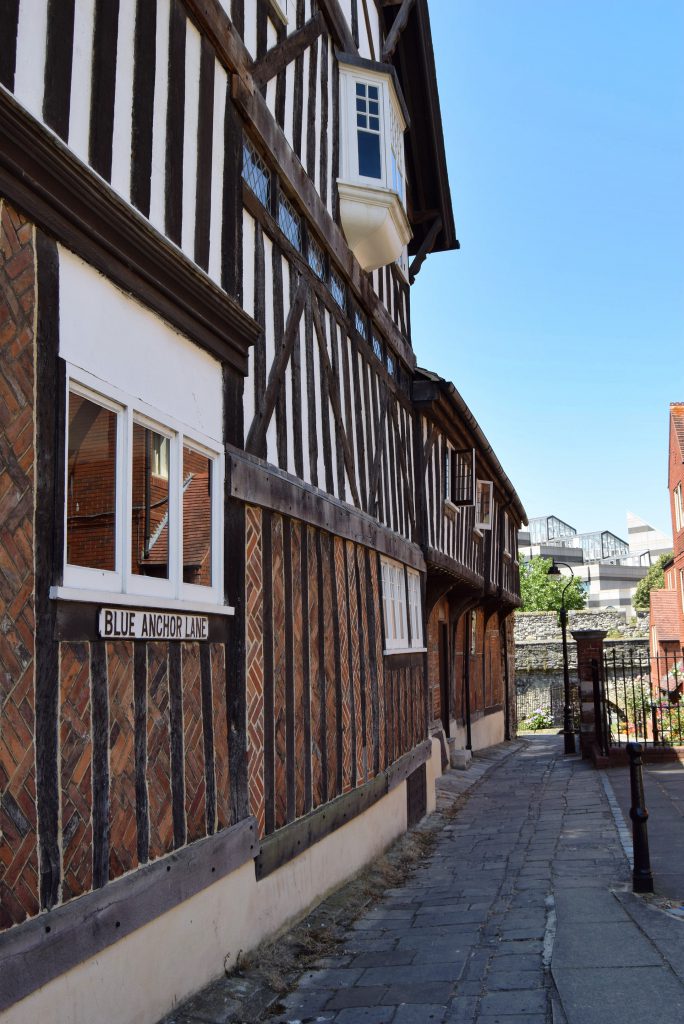 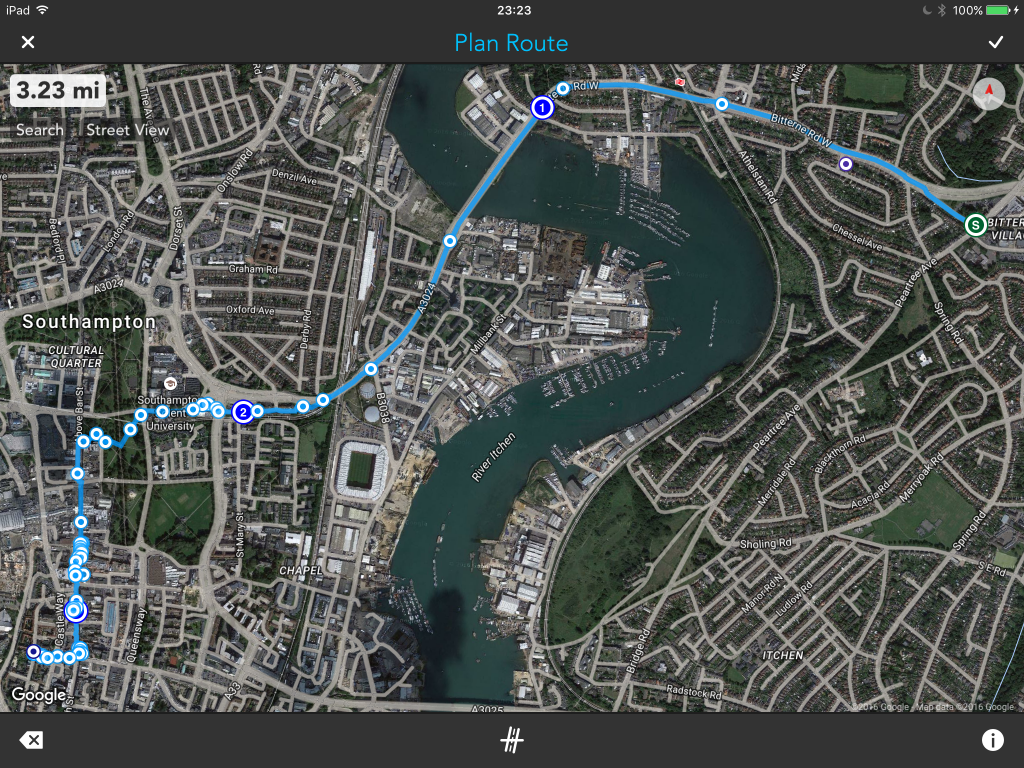 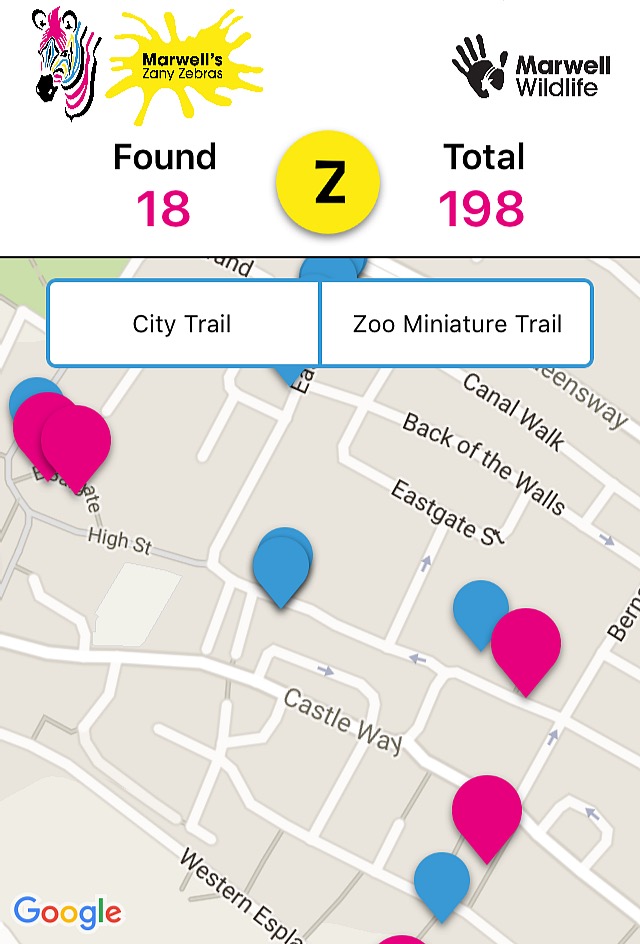