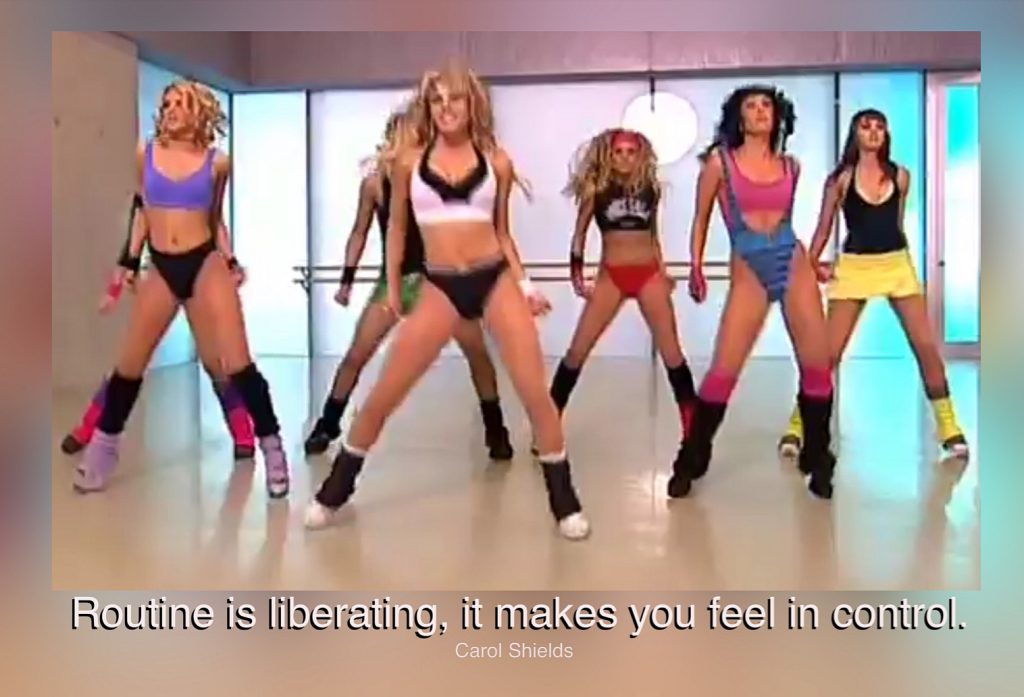 The beginning of 2014 seemed like a good time to try to get some semblance of order into my life again. Exercise was high on the agenda.  With a broken  DVD player in the gym Pump it Up had fallen by the wayside. Then I discovered some of the workouts were on YouTube. With a little fiddling and experimenting, I found out I could create a playlist on YouTube too. Who knew that? Ok, probably everyone knew that except me.

This morning I tried out the YouTube Pump it Up playlist I created. The warm up, which is a workout in itself, was one video and I did that, remembering all of a sudden how hard the squat and pump is and wondering if my thighs would protest later. The second section, dance, was spread over three separate clips. This meant having to stop and restart which was annoying but I did it. After that I was worn out so I’ll try the rest tomorrow. How I ever used to do the whole hour and a bit right through I don’t known. Obviously I’m not as fit as I thought I was.

By way of a rest I applied for a few jobs then I looked at all the information the Job Centre gave me. Apparently they wanted me to sign up with a Government site called Universal Job Search. Easy, I thought, I’ve signed up with quite a few job search sites in my time and it usually entails registering and uploading your CV. Not quite so simple with the government site. In fact it was a source of much frustration and some swearing.

Firstly, the blasted thing was so slow it was ridiculous, then it kept crashing. I did manage to register eventually and I got an email with my log in. So far so frustrating. Then I went back to upload my CV. The problem was it wouldn’t let me. Every time I tired it told me to log in, every time I pressed log in it took me back to the profile page where half the information I’d put in was missing. Every time I filled it back in again it told me I’d already registered with this email address and to use another one. Easy if I had another one. Much frustration.

In the end I emailed the help line who tell me they will get back to me within twenty four hours. All I can say is, if an intelligent woman who has used multiple websites and complicated systems, can’t work it out, then heaven help some poor person who is barely computer literate. Talk about not being user friendly! So I’ve given up on that for the time being and gone back to all the other search sites that do work. After wasting two hours of my life on all that I didn’t have time to go for the walk I’d planned over to the common to see the fallen trees.

To be fair the thunder and lightning also put paid to that one. Probably not the best idea to go walking in the woods in a lightning storm. So option two, down to the shore it was then. First I checked the tide times, this time to avoid high tide. This was after seeing a news report on film student Harry Martin*, who went out to take photos of the storm along a costal path in Newton Ferrers, Devon, last Thursday and has not come home. The chances are the poor lad was washed out to sea and I can only imagine what his poor family are going through. Better safe than sorry and a photo isn’t worth taking such a risk no matter how good it might be.

Luckily high tide was due around half past three today so I was pretty safe to set off at about half past nine. It was still raining but the lightning had stopped which was a bonus. The Little Hill appears to have a small stream running down it, gathering in a large puddle outside Topol’s house and creeping towards our driveway. This may have something to do with him blocking the drain with building rubble. Still, there was a little patch of blue sky behind me, maybe it would grow. 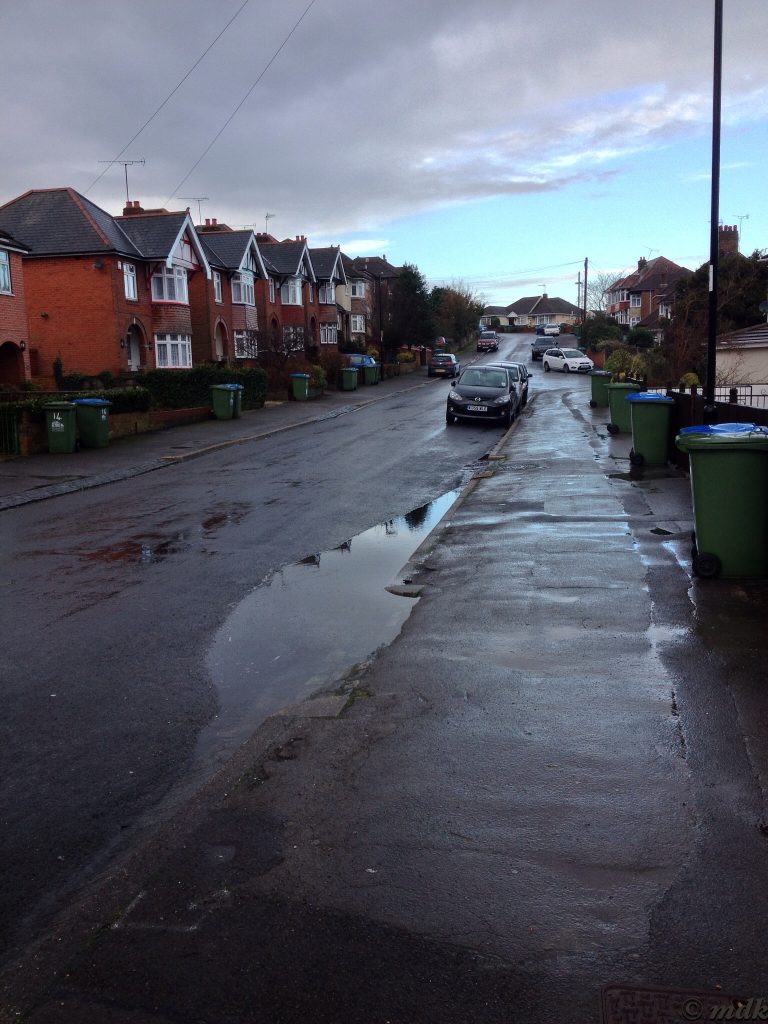 By the time I got to the top of the hill the rain seemed to be easing off and I may have been imagining it, but it seemed as if the blue sky was growing. A very strong wind was blowing in my face making forward progress slightly difficult but I figured it would be blowing at my back on the way home, pushing me up the hill. Some fairly large branches have come down on one of the trees up on the little village common. Hopefully they didn’t fall on any passing cars. 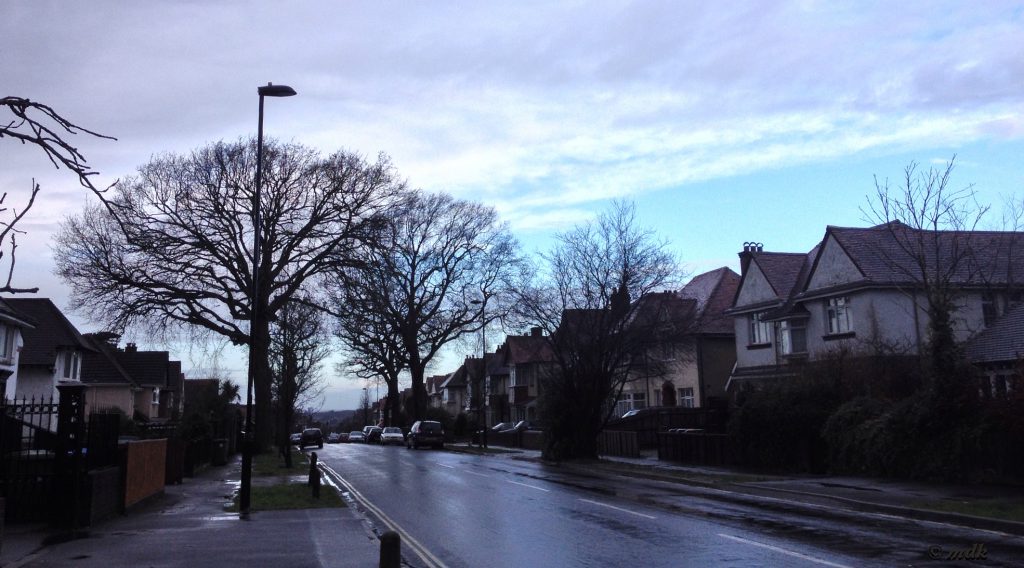 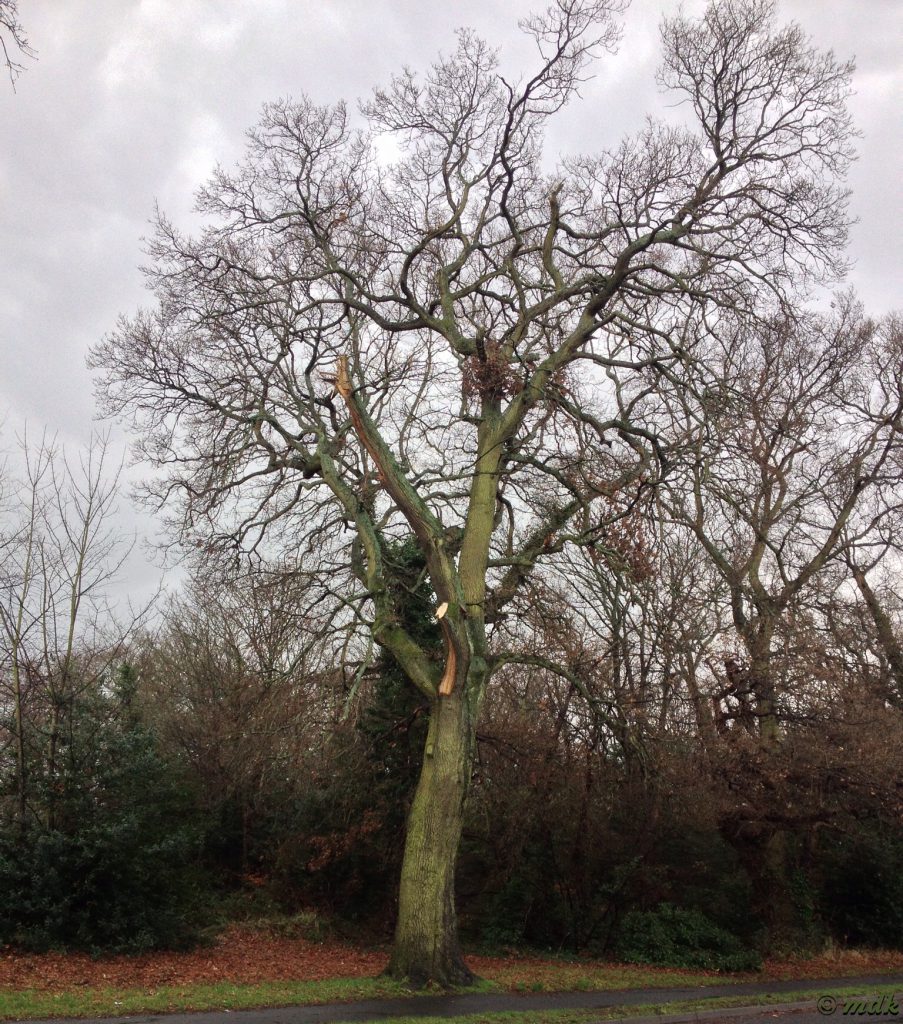 When I got to the lane that runs behind the green it turned out to be another small stream, thankfully not too deep. I’d have liked to have walked the little woodland path but I knew it would be way too muddy. Around about then the rain stopped, although I was still battling against the wind all the way down to the shore. I’m thinking it must add to the calorie burn though. 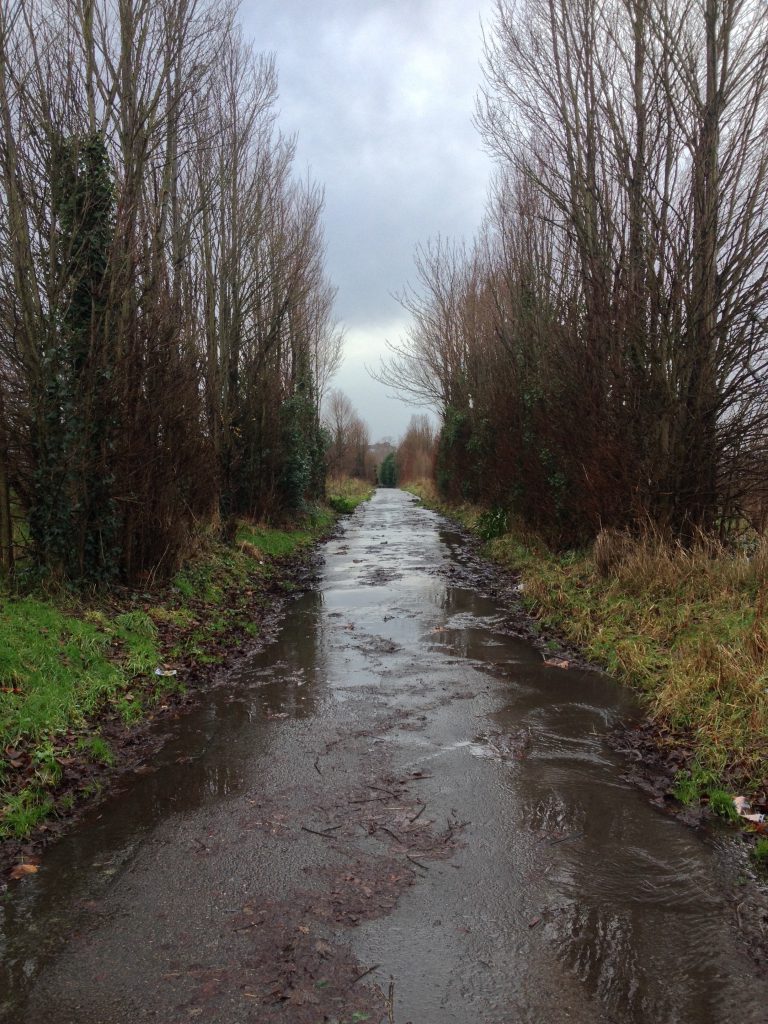 The wind was really singing in the masts as I passed the sailing club and the sun was trying to come out. It wasn’t trying all that hard, if it had been doing Pump it Up it wouldn’t have got past the warm up. Down on the shore something didn’t look quite right but I couldn’t quite put my finger on it. 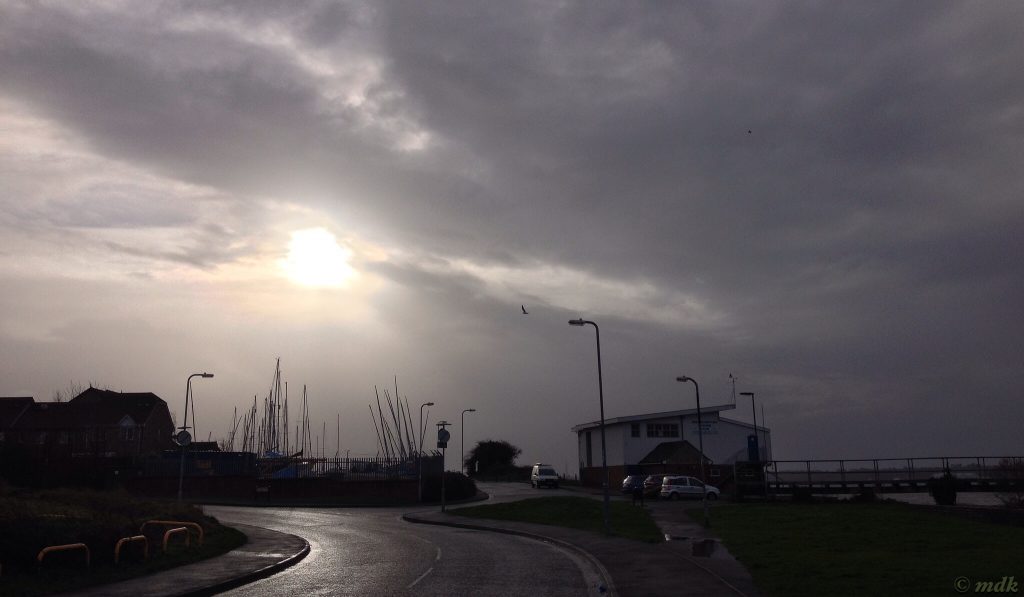 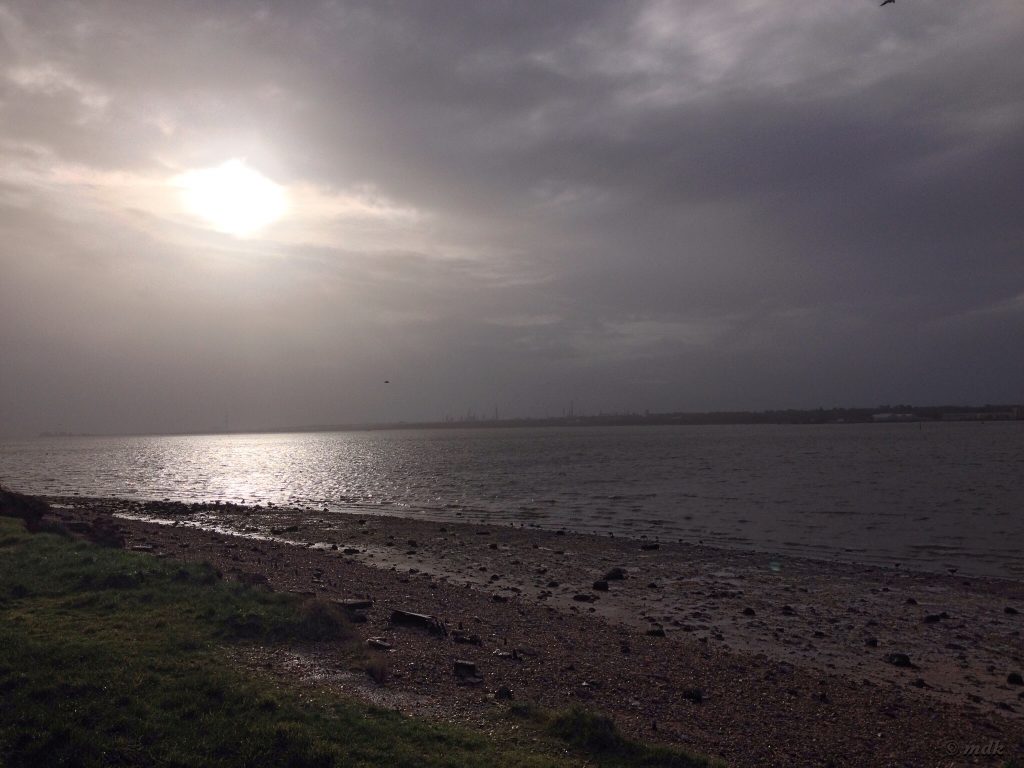 Between the sailing club and the promenade there is a grass bank, a little like a mini cliff, beside the path. The high tides and rough seas have caused quite a few landslides and some large chunks of soil and rock have crumbled onto the shore. In one place the grass has fallen away almost as far as the path. 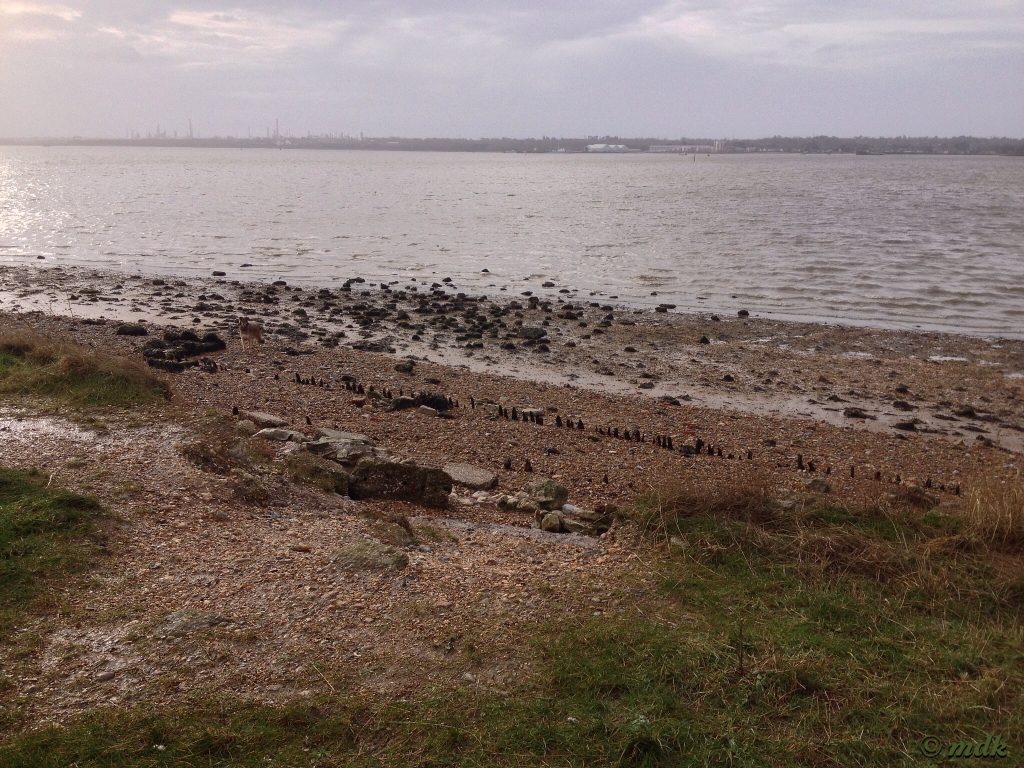 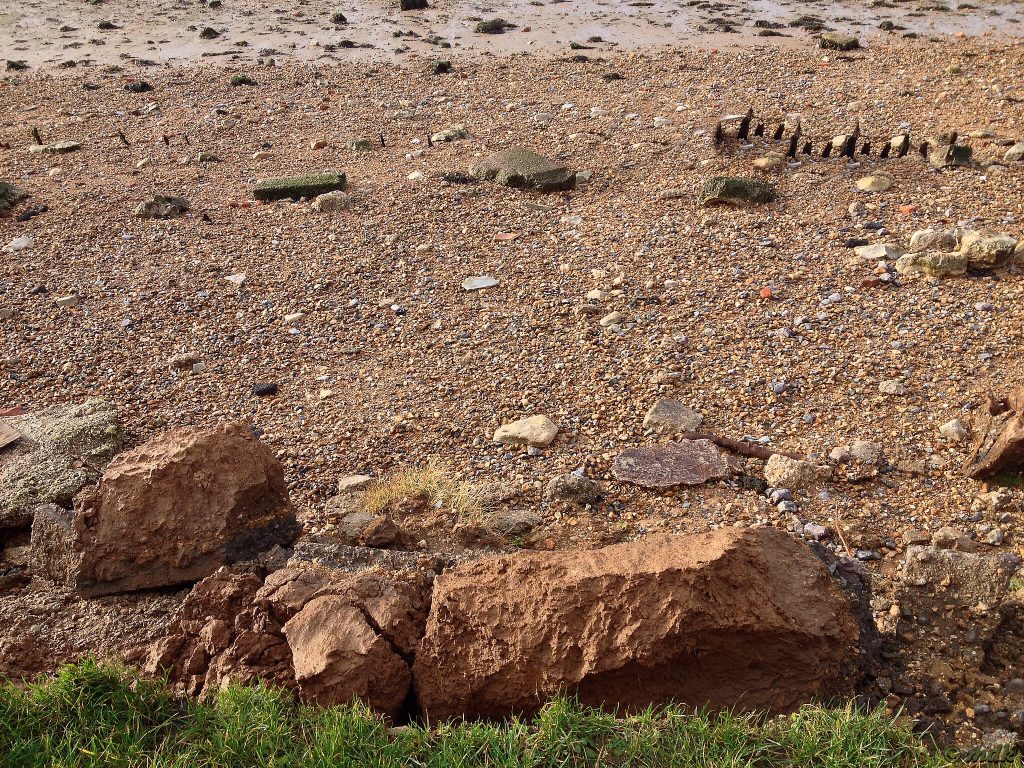 At the beginning of the promenade I was relieved to see the flooding was gone. A few days ago the sea covered not just the path but the whole road too. The piles of seaweed and shingle on the road showed how far the tide came up. Now it’s merely a deep puddle on either side of the road. As I walked along I noticed lots of crows on the shore. They were bobbing up and down like jack in the boxes and I wondered what they were up to. It wasn’t something I’d ever seen before, come to that, I’d never seen many crows along the shore at all, usually it’s just seagulls. 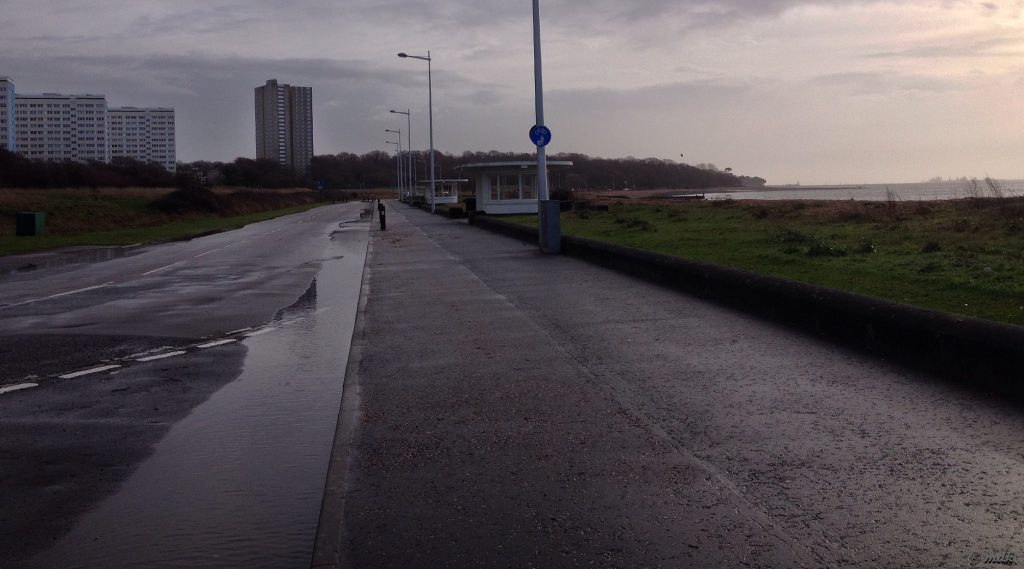 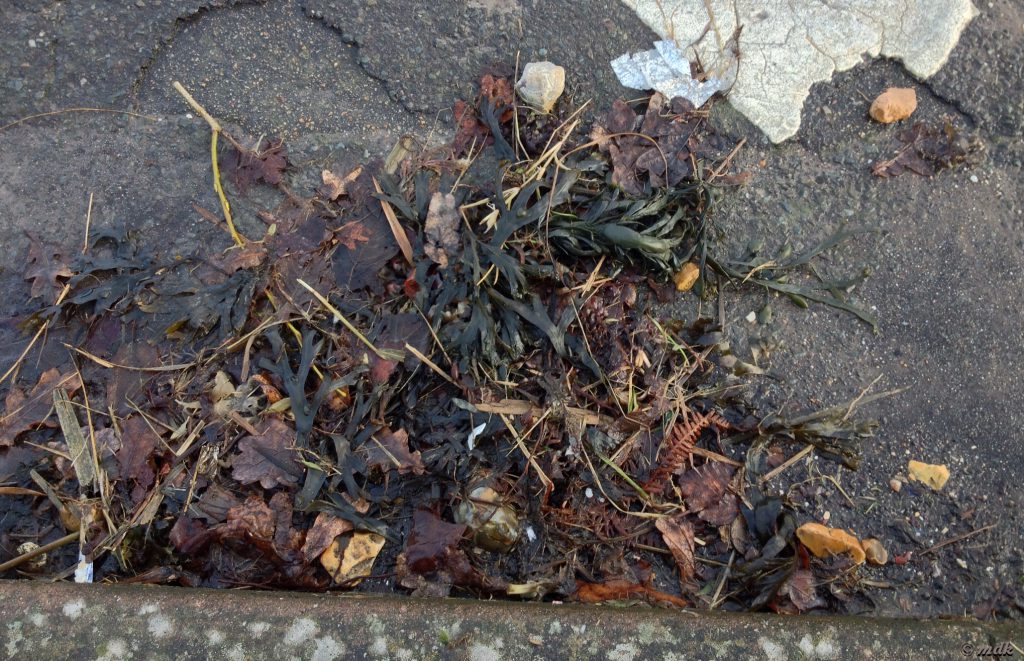 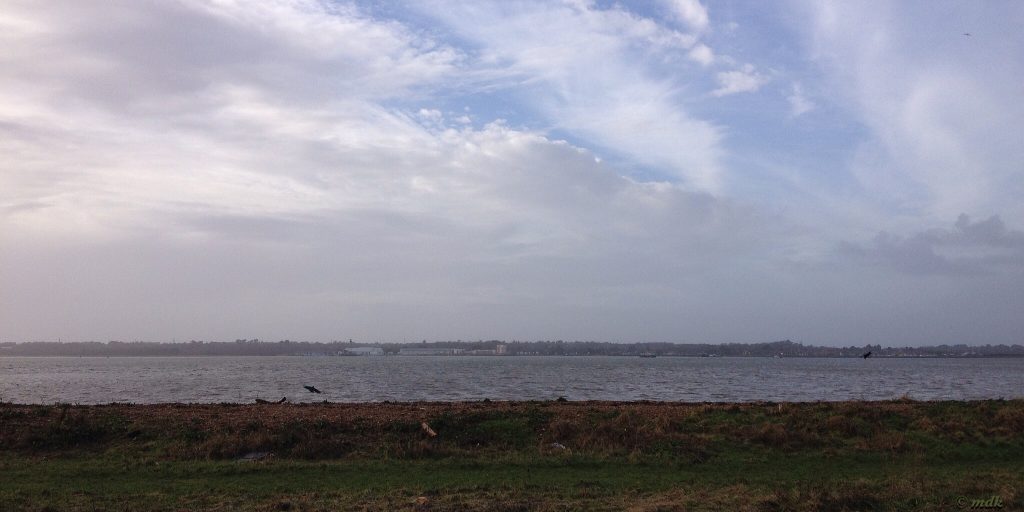 Puzzling over the crows I carried on to the end of the promenade. I wanted to have a closer look at the flooded road. At the end of the promenade there is a thin path running between the trees and the shore towards Netley, anout a fifth of a mile along it is a bridge over a stream that usually runs under the road from West Wood. Right now the stream is so full it’s running over the road as well as under it and I couldn’t even get as far as the bridge because the water was pouring from the road across the path. 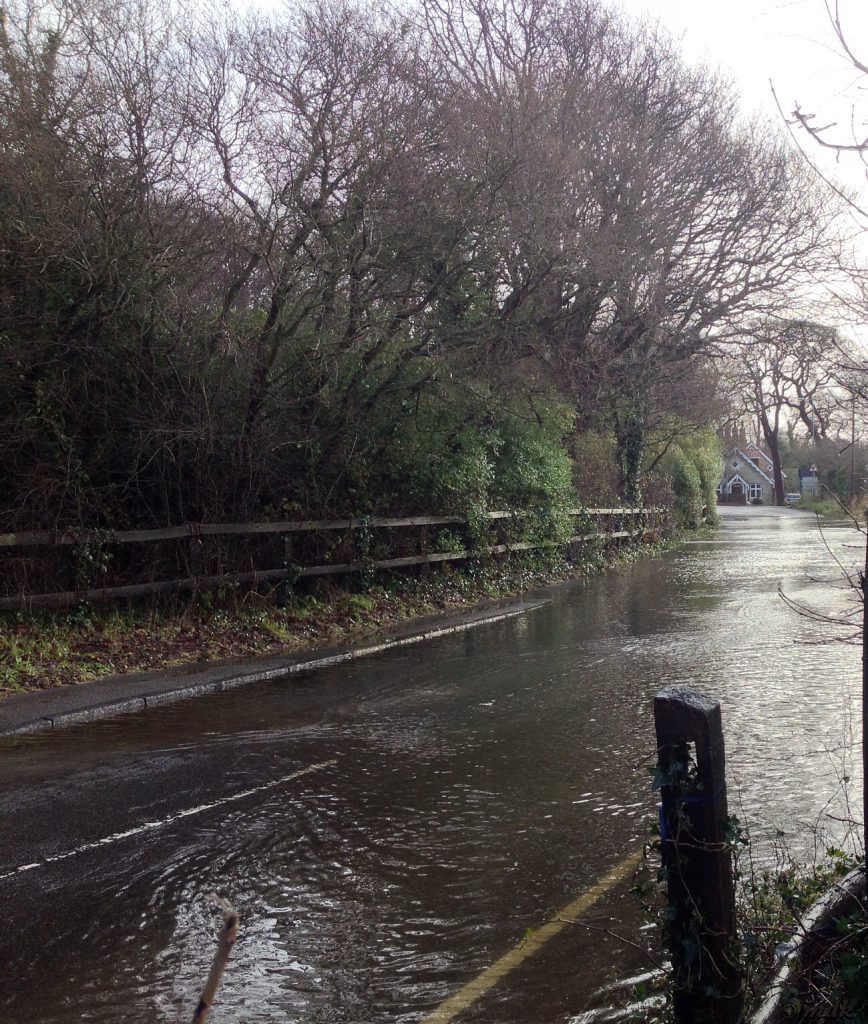 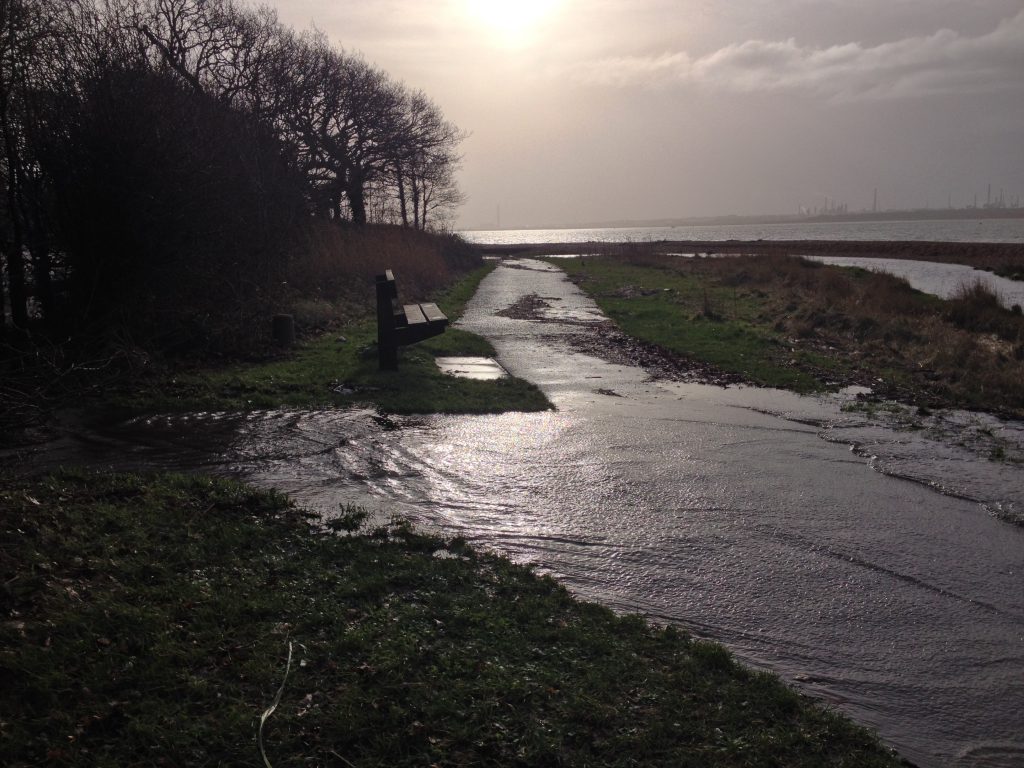 Going as far as I could without getting wet feet I leaned over the thorny thicket of hedge and peered along the road at the flood water. As I watched a couple of cars came through, slowly and on the wrong side of the road to avoid the deepest part. It looked as if the spray from the vehicles had washed away the soil, creating the flood across the path. 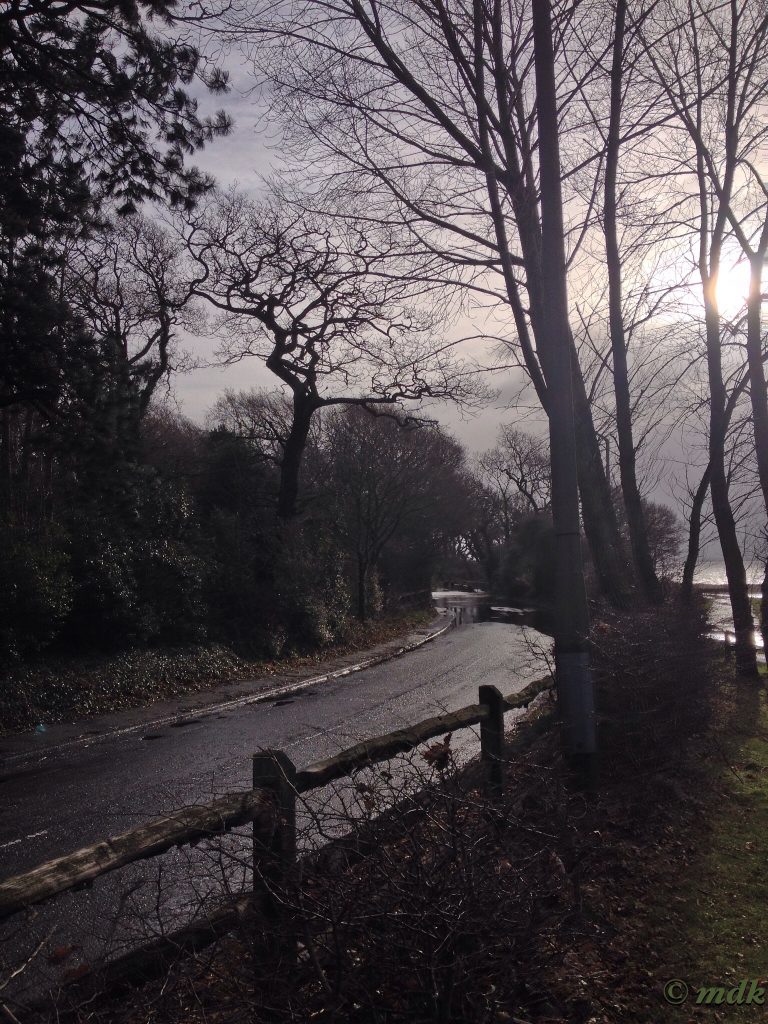 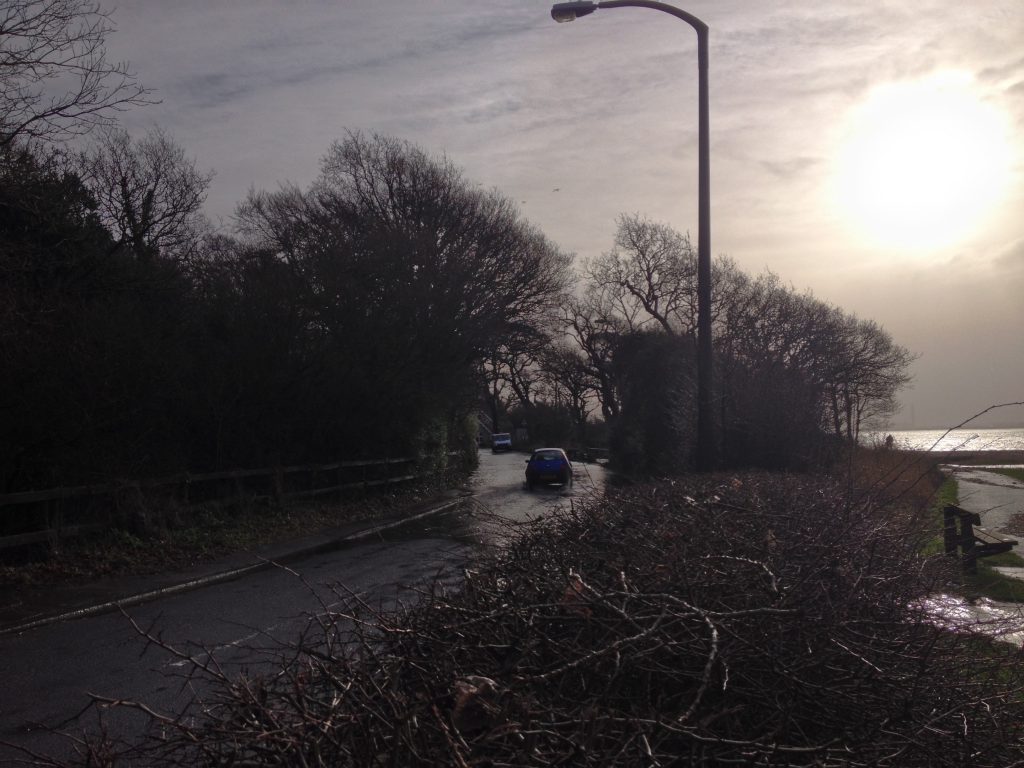 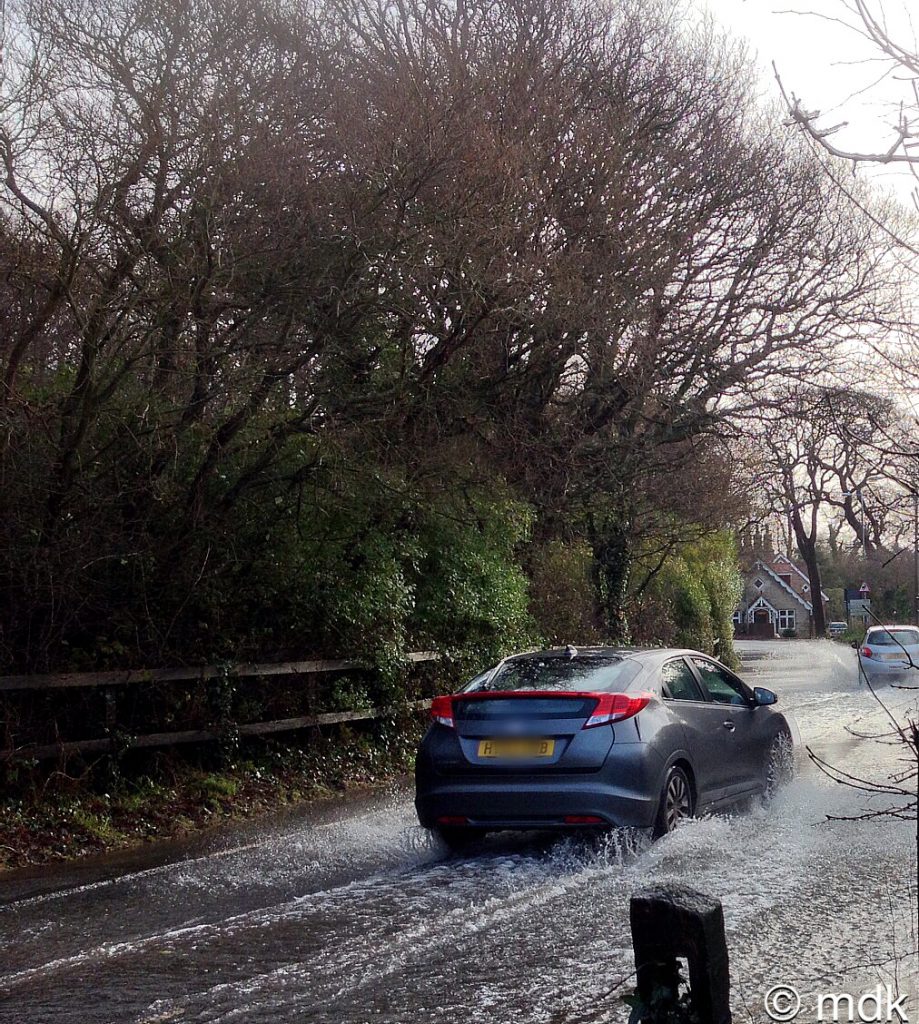 The water had cut a channel through the shingle to join with the original stream which seemed swollen by all the extra liquid. Behind me, as more cars pushed more water across the path I could see someone trying to cycle along the shingle. Walking on shingle is tough enough but I should imagine cycling is even harder. I wondered if the cyclist had chosen the shingle because the path was flooded even more further along by the bridge. For a while I watched him. As he got closer I could see it was an elderly man and he might have been better off sticking to the path because, when he came to the stream, he had no choice by to go through, getting wet trousers for his trouble. 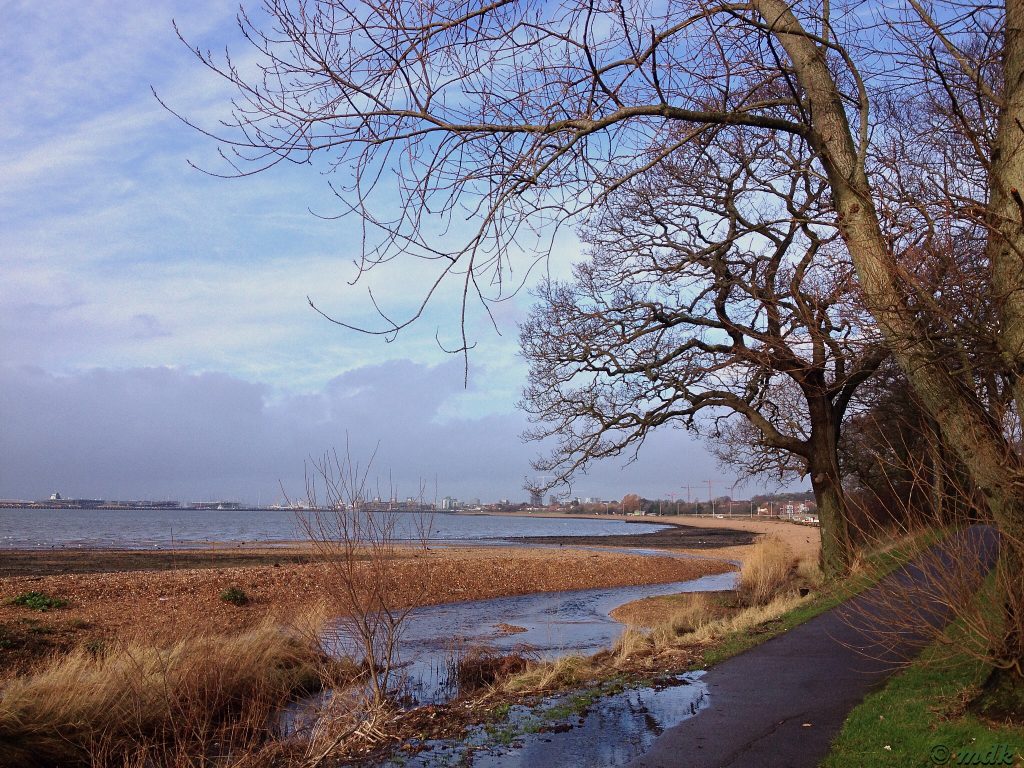 As I walked back towards the promenade it struck me what it was that was so odd about the shore. The shingle was piled in a high mound across the grass and the lower shore, normally just more, if wetter, shingle looked more like sandy mud with a few stones. It seems as if the high tides and rough seas have washed the shingle up towards the road, exposing the sandy under layer. I walked down to have a closer look and saw many more shells than normal and an awful lot of closed cockles. 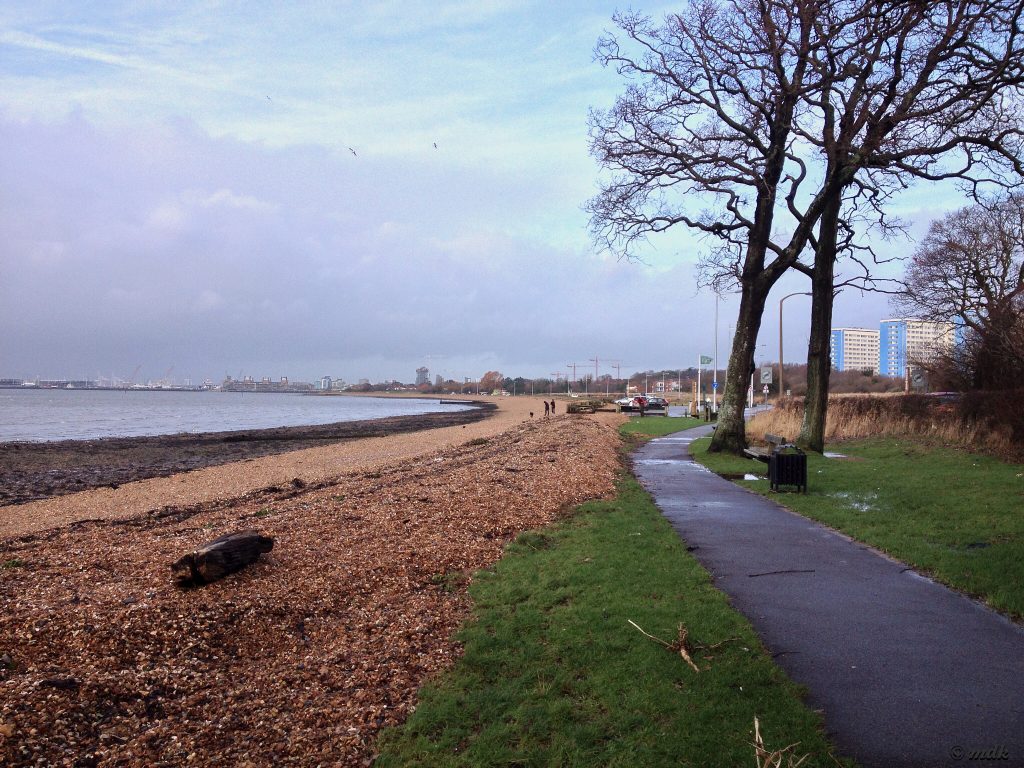 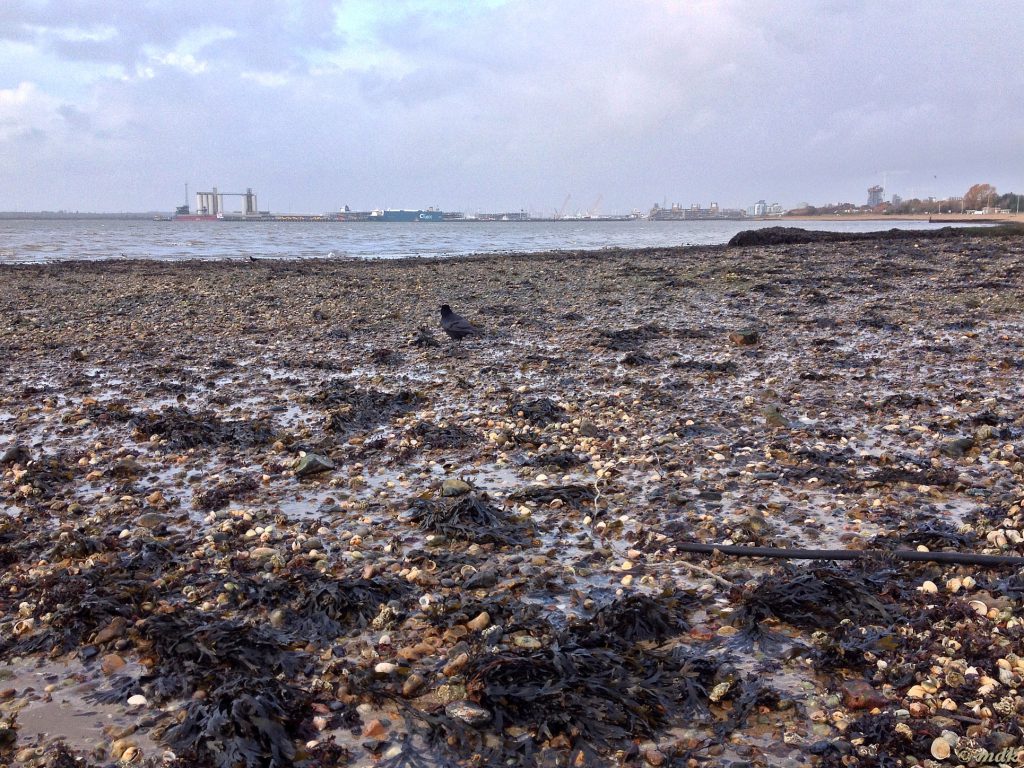 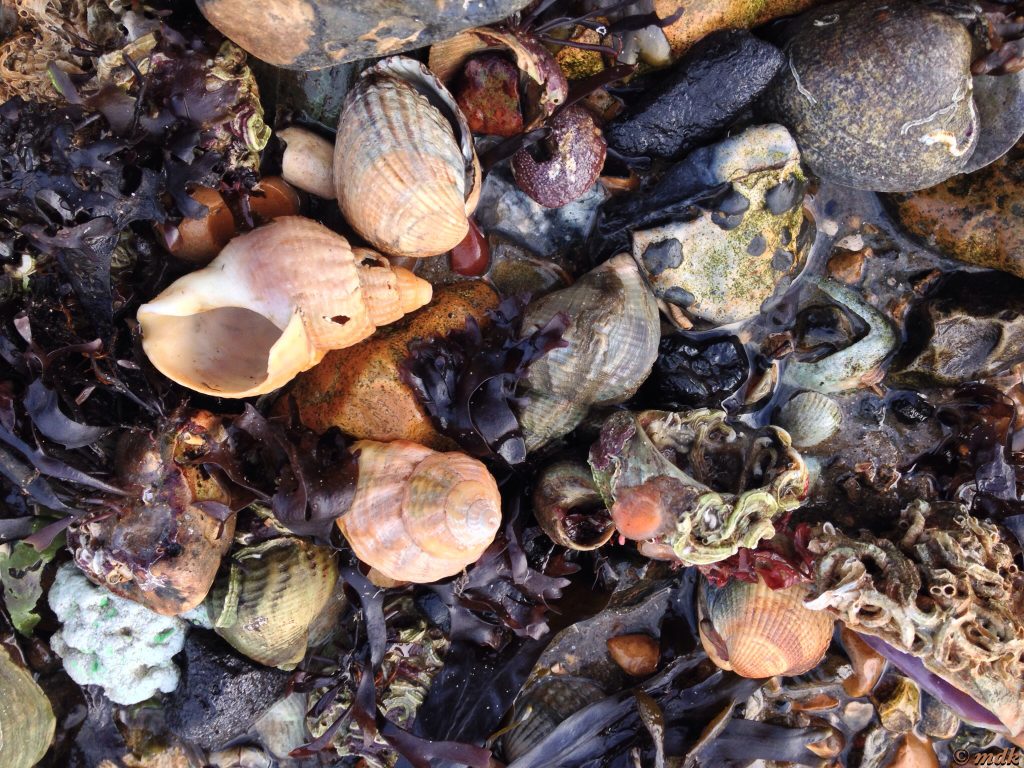 When I was a child I used to love coming down to the shore and collecting shells, whole cockles were a rarity, closed ones almost unheard of. Now the jumping jack crows made sense. Crouching down I watched a crow, close by but so intent on searching the shore he didn’t even notice me. He picked up a cockle from the beach, flew into the air then dropped it to break it open. He then zoomed back down to pick up the spoils. How he could see it amongst all the debris beats me but he did and soon he was repeating the process all over again. 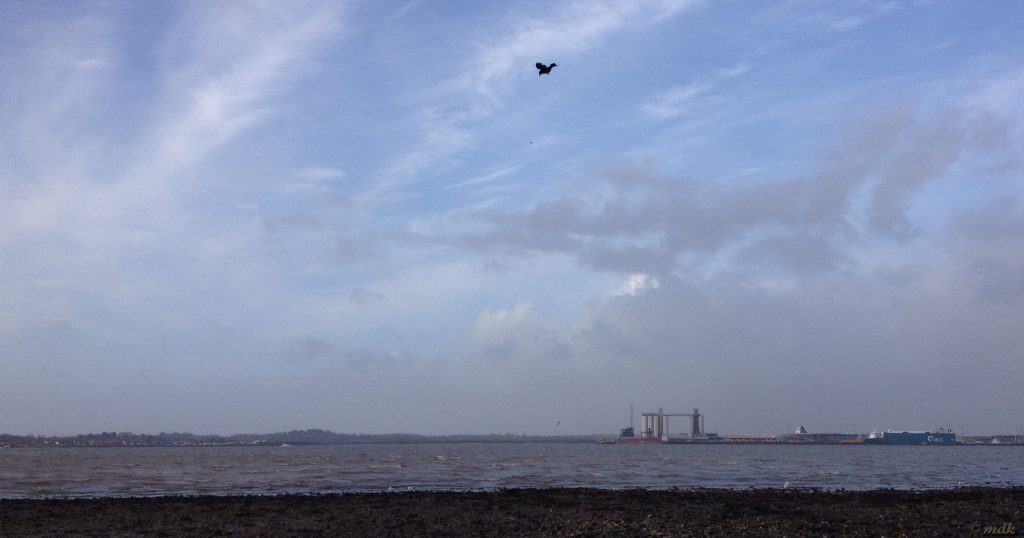 The walk back at least had the advantage of being wind assisted although my legs were a little cross with me after the Pump it Up. A quick zip round Sainsbury’s for milk and a visit to the butcher and I was home. Now it’s back to the job hunting. It’s nice having time for long walks but I’d rather have a job. 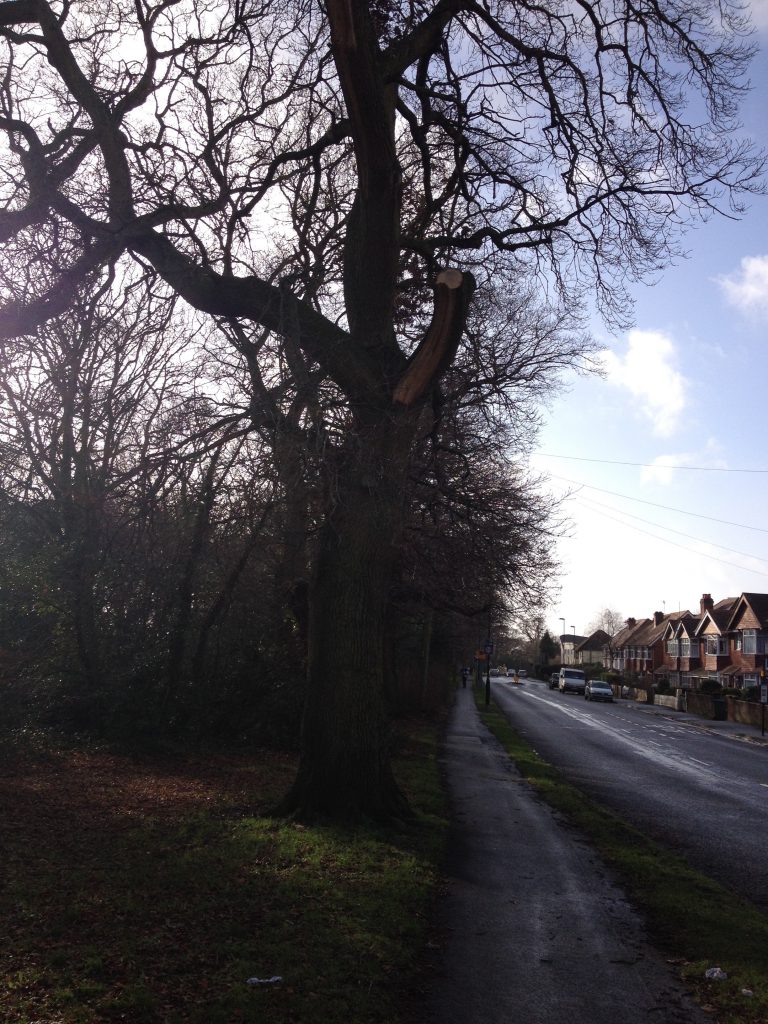 * Sadly, Harry Martin’s body was found by kayakers nine days after he disappeared in a small cove on the South Devon coast.