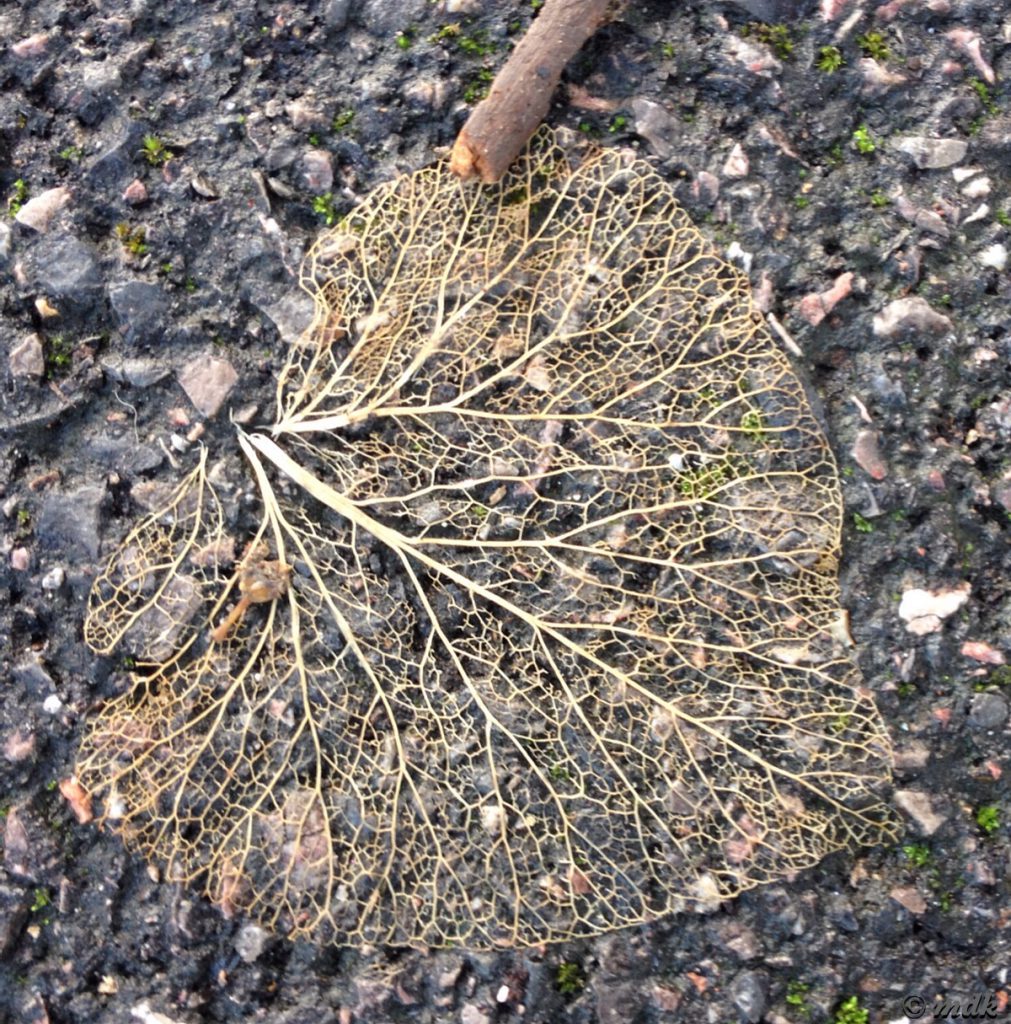 January 2014 and it was time to sign on at the Job Centre for a second time. Even before I’d left the house I was feeling horrible about it. It’s such a demeaning experience I can’t imagine anyone looks forward to it. So I set off on the familiar walk to work route with a feeling of dread. Finally it really felt like winter, a proper cold and frosty morning. On the river path I stopped briefly to take a photograph of a skeletonised leaf on the ground and another couple of the mist over the water. Anything to take my mind of where I was going. 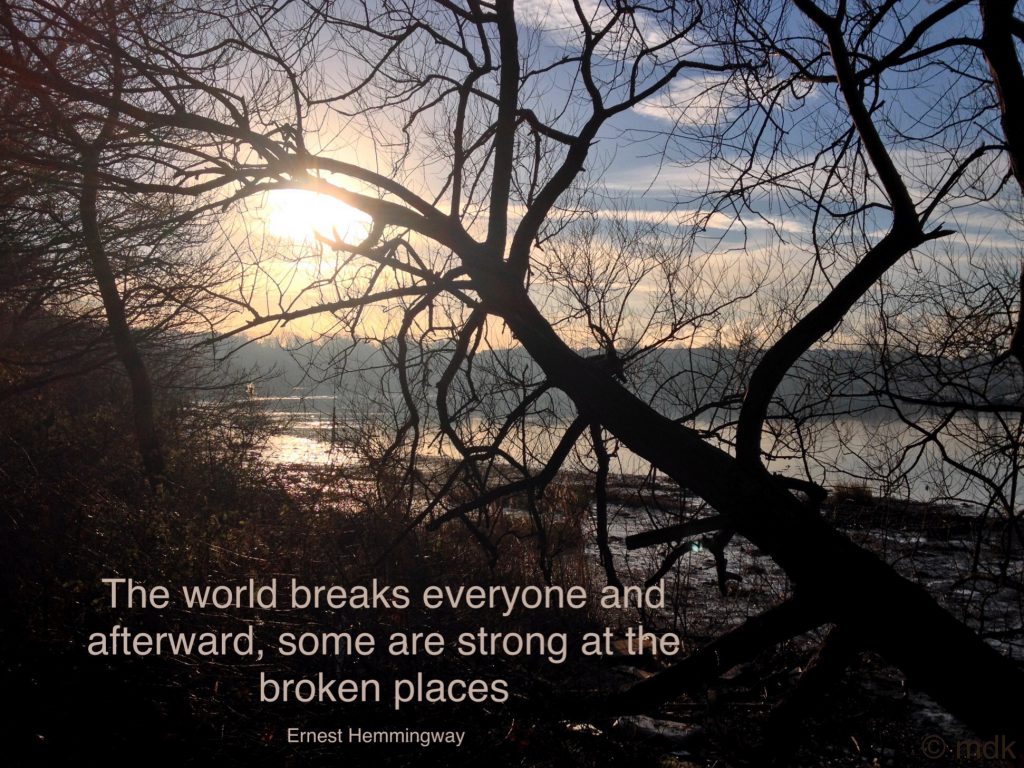 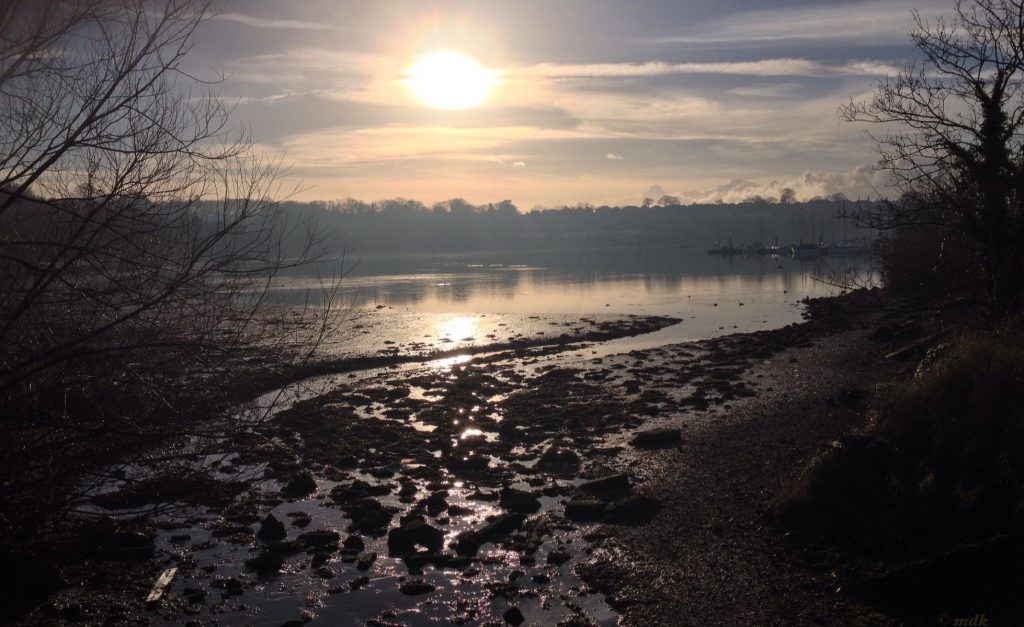 When I reached the Skeleton Ship I stopped again and peered over the wall. A great deal of litter has appeared and there seems to be a lot less of the ship than there was. Perhaps the little boat tied to it has been beating up against the rotten timbers in the gales. Then again I have a suspicion that the people living on it are using the ship as a walkway to get to and from the shore. Actually it makes me quite cross but there’s little I can do. The little boat is moored illegally and I’ve reported it but no one seems to care. 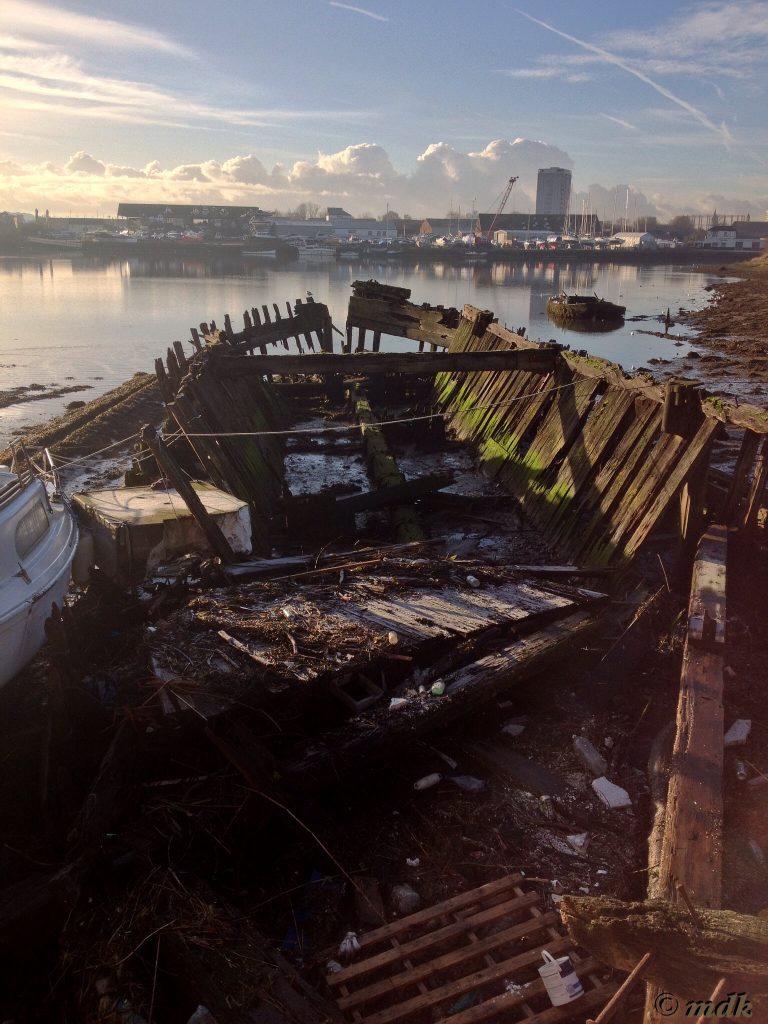 When I reached the other side of the bridge I decided I couldn’t face walking past the office this time so I cut through Kingsland Market and the parks. After my last visit where I was early and told, quite rudely I thought, to “go away and come back at your appointment time,” I left home later. Of course this meant I started to get a bit panicked about actually being late. For the last half mile I marched along at top speed, getting quite hot and flustered in the process.

When I arrived, four minutes early, there was a huge queue to get to the desk and collect my ticket. Yes, they actually make you queue to get a ticket which you then pass to someone on the door right next to them before they’ll let you inside. What a waste of tax payers money! It was a good six minutes before I got my ticket and went through the door and up the stairs.

The man on the door upstairs asked for my name and ticked it off his list.
“What time was your appointment?” He asked, barely looking at me.
“Ten fifteen,” I told him.
“What time is it now?” he said, glancing at his watch pointedly, not knowing how thin the ice he was skating on was.
“I was here at ten past,” I said, feeling quite peeved and not liking his attitude very much to be honest. Right then I was caught in the nomansland between tears and angry explosion. “I’ve been waiting in the queue ever since to get in.”
He must have worked out from my tone and my face that he’d better not push the point and he let me go through. It seems to me you can’t win. If you’re early they tell you off, if you’re on time they make you wait until you’re late and then tell you off. Let’s face it, I wasn’t there through choice and I felt bad enough as it was.

So I sat and waited for someone to call me… and waited… Last time they kept me waiting for ages and I meant to bring my kindle this time but I forgot. Next time I really will bring my kindle. A man who came in after me got called up to a desk. It was quite disconcerting to realise I could hear the whole of his conversation with his advisor. There is no privacy when you’re unemployed apparently. He didn’t speak English, at least not very well, and had not filled out his job search form. In fact he didn’t seem to even understand what a job search form was.
“You have to write down all the jobs you apply for and all the things you do to look for work,” the advisor told him, pointing at the form. “If you don’t do it next time you will be sanctioned.”
He looked at her blankly.
“We-will-stop-your-money-if-you-don’t-fill-in-the-form,” she said again very slowly with lots of hand gestures.
I wondered how he was ever going to get a job if his English was so poor he couldn’t even understand how to fill in a form.

Eventually I got seen. The woman was quite pleasant but told me, “we’re very short staffed so I haven’t really got time to do much today except check your job search form.”
“Maybe you should take on some more staff,” I said. “If you’re looking for people…”
I did ask about courses but she didn’t have time to look and the only one she knew about off the top of her head was an accounting course. Numbers are really not my thing.

When I got outside CJ was waiting for me, having just been to sign on himself. There were a few tears as we walked up the road towards the precinct together. Not CJ, me. Seems to me if someone normally as confident and cheery as me can be reduced to tears by the degradation and humiliation of it all it might be time they had a rethink about how they treat people. It also explained all the security guards lurking around. If you regularly speak to people the way they spoke to me, sooner or later someone is going to get violent. Yes we should be grateful that we live in a country with a welfare system but, then again, I’ve paid into that same welfare system all my working life and this is the first time I have ever asked for anything back from it. Will I ever get used to this? I hope I don’t have to. 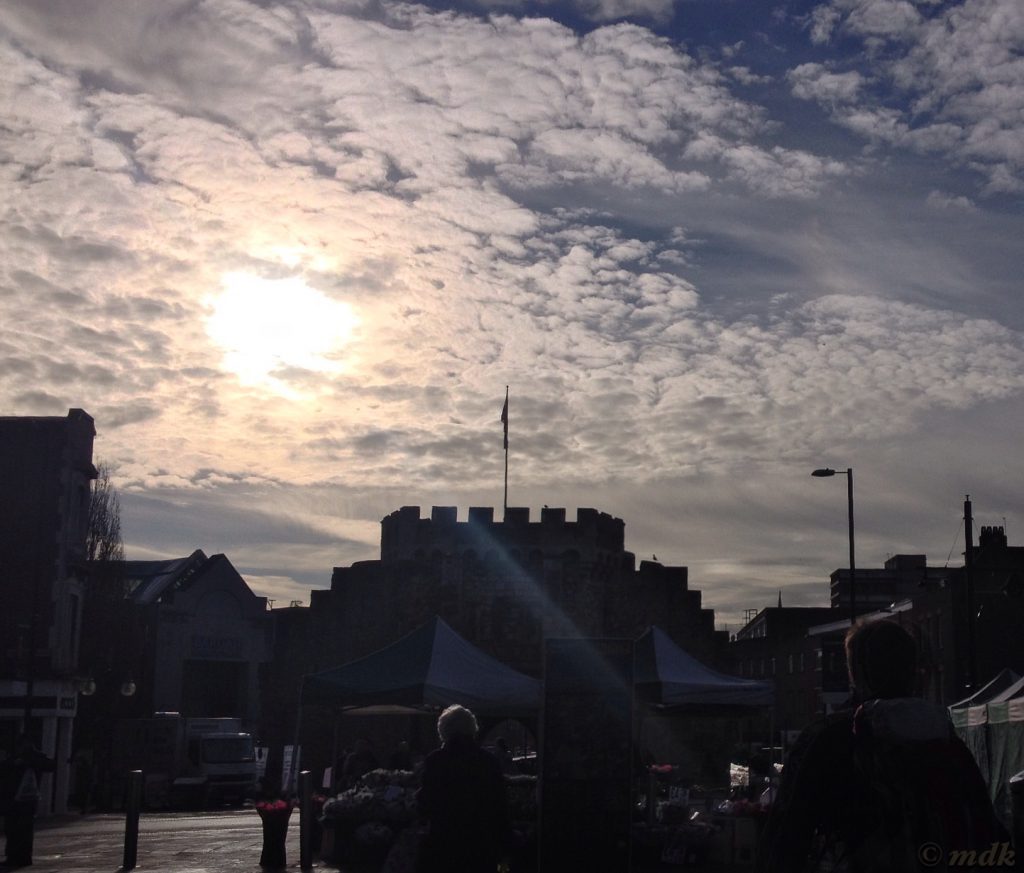 My one nice thing for the day was meeting Panda in Starbucks. We had a couple of skinny lattes and a good old chin wag. A couple of hours of who we’d seen, what we’d been doing, a bit of laughing, a bit of moaning, tales of Big John, the huge Dutch man who owns Busy Bees where she works and I used to work. I love Panda, she made me feel so much better. We didn’t get banned from Starbucks either. Today we were far less raucous than normal, almost subdued. 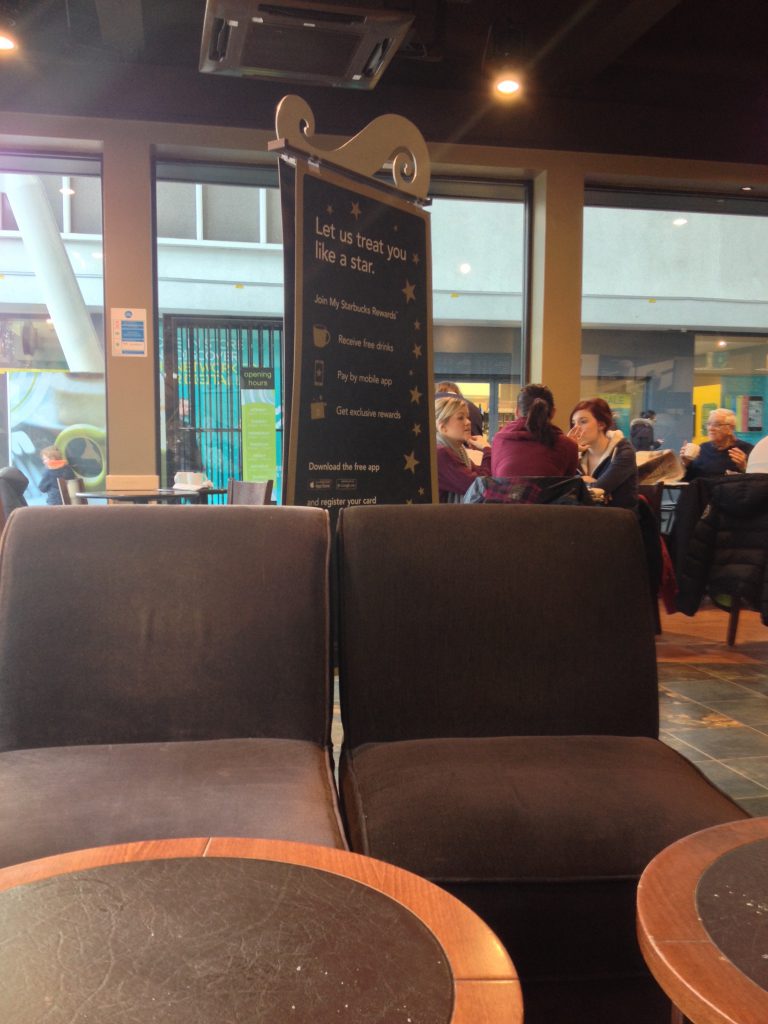 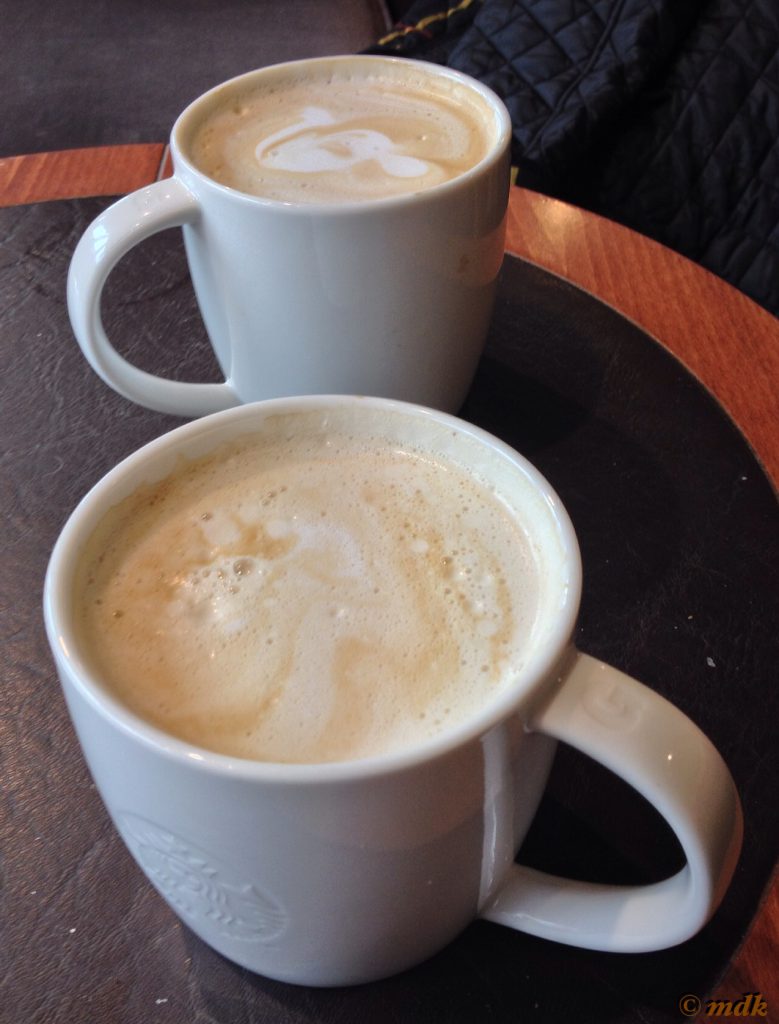 The day ended as miserably as it started. My nice walk home over the New Bridge was scuppered by a torrential downpour and I had to catch the bus. Normal cheery service will be resumed soon I promise. 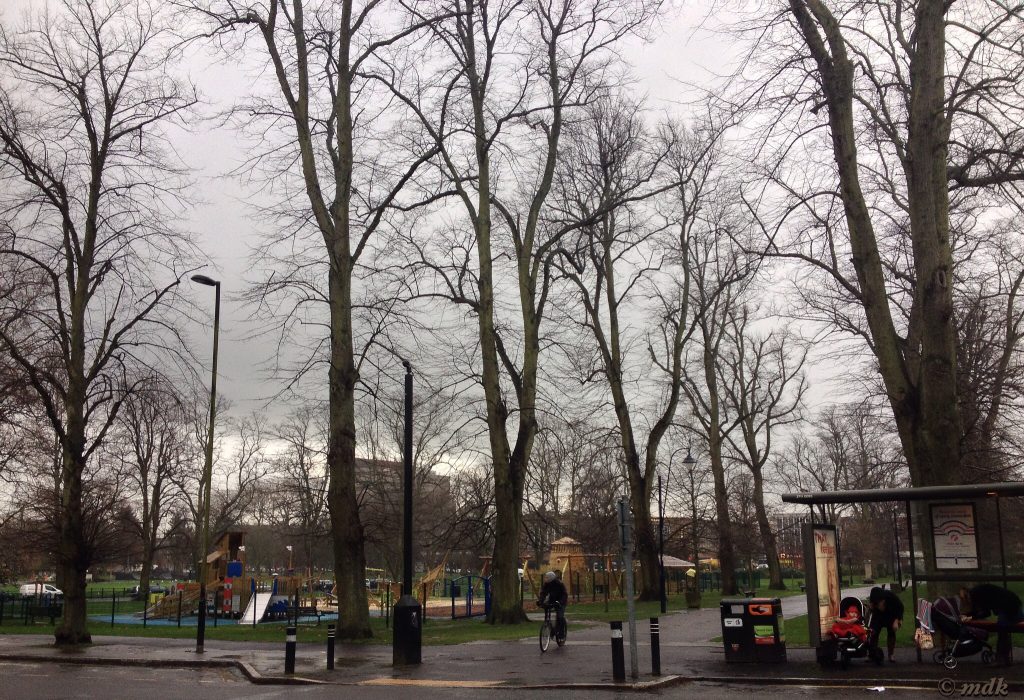