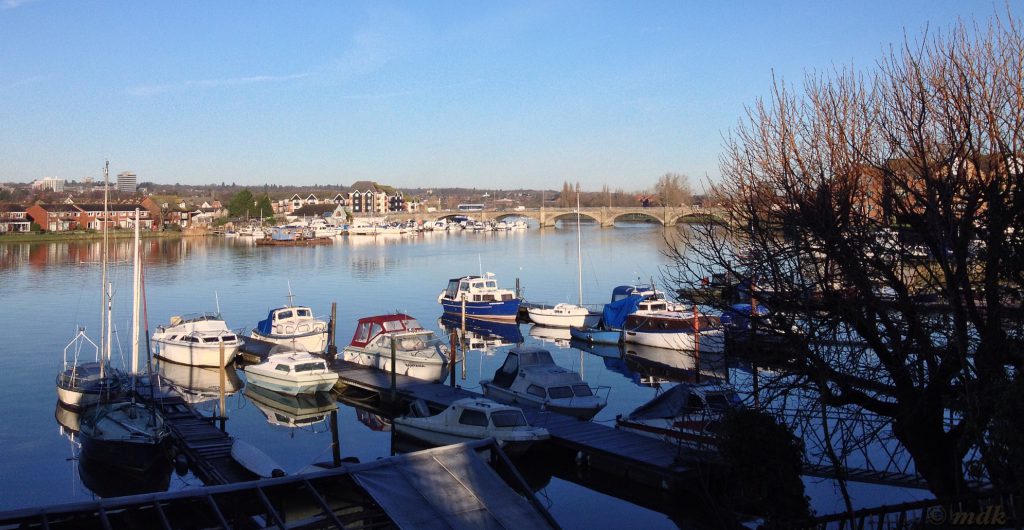 Today there were two things to make me smile. The first, a text from Panda about a possible job opportunity. It’s for a financial institution, which isn’t really my thing but it’s administration, which is, so I fired off a nice email along with my CV. There was even a reply to say they’d get back to me as soon as they could, I’m taking that as good news but without getting too excited of course.

The second thing to make me smile was a nice long walk, well not really long by my standards but longish. The plan was to go to the common, have a look at the fallen trees and maybe a wander round the old cemetery. It was a proper winter day, frost, blue skies, puffs of breath as I walked. The deck was slippery as I left the house, thick bubbles of frost on the deck posts. Personally I felt it was a vast improvement on the warm wet stuff with high winds we’ve been having and goodness knows we have had enough rain to keep us going for the rest of the year. Mind you there’ll still probably be hosepipe bans in the summer no doubt.

Instead of taking the easy route, mostly involving main roads, I decided on the slightly more scenic and rather longer option, along the river to the Triangle then up towards the university. My route took me along the edge of the river, not that you can really see the river behind the fences and hedges. About two thirds of the way along there is a gap and I peered over the boat houses at all the little yachts with the bridge in the background. Then it was over the bridge, with a quick glance across the road at Riverside Park, and a rather boring but quiet walk up towards the university.

Again I could have taken a quicker route to the main part of the common but I wanted to explore the path behind the university, the one I wandered down before my interview. There was a tiny twinge of sadness that I wouldn’t be working there and walking those paths every day but I soon put that aside. I’m trying not to get too excited about jobs any more, que sera, sera. 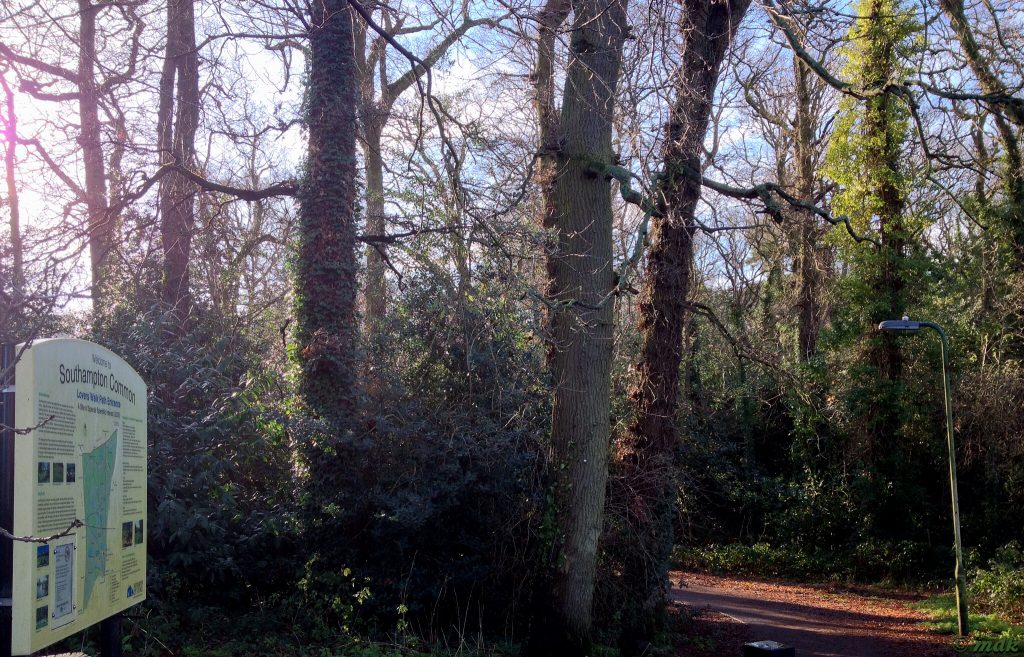 As I strolled along the path I searched for the fungi I saw on the day of my interview but I didn’t see any at all. Maybe all the rain has washed them away or rotted them or they could have just reached the end of their fruiting I suppose. It’s quite a busy path, cyclists, walkers, students all coming and going so it wasn’t what you’d call peaceful. I did spot a rotten old tree and stepped into the woods on a fungi hunt but all I got for my trouble was some very lush looking moss, it must like all the rain. 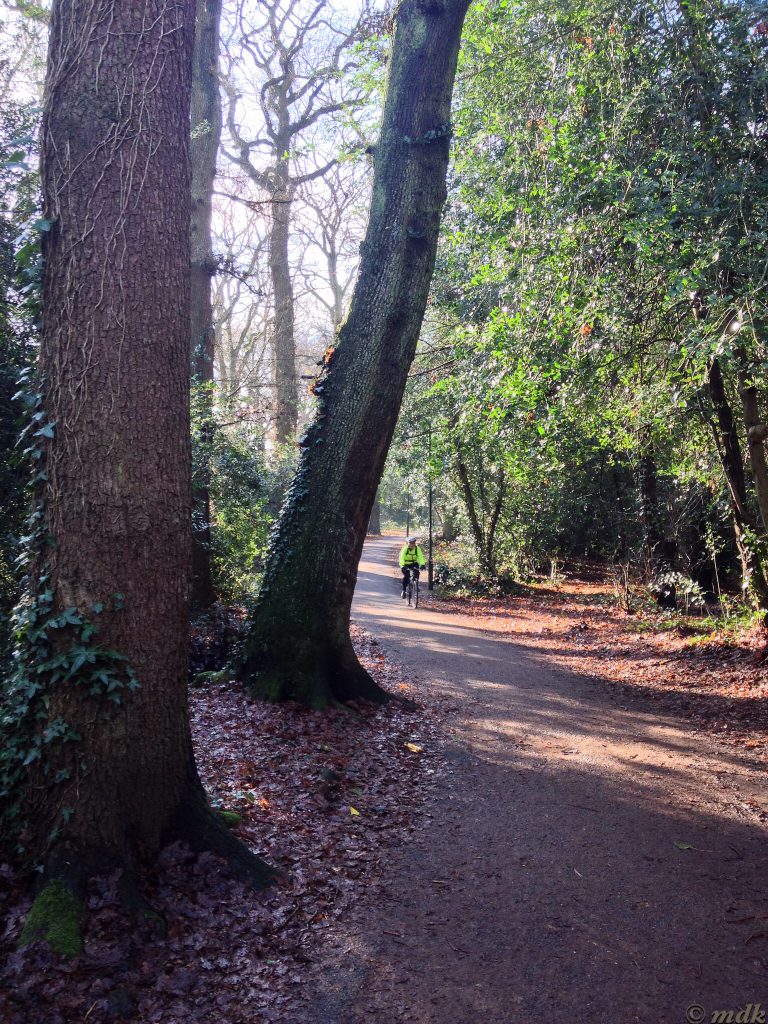 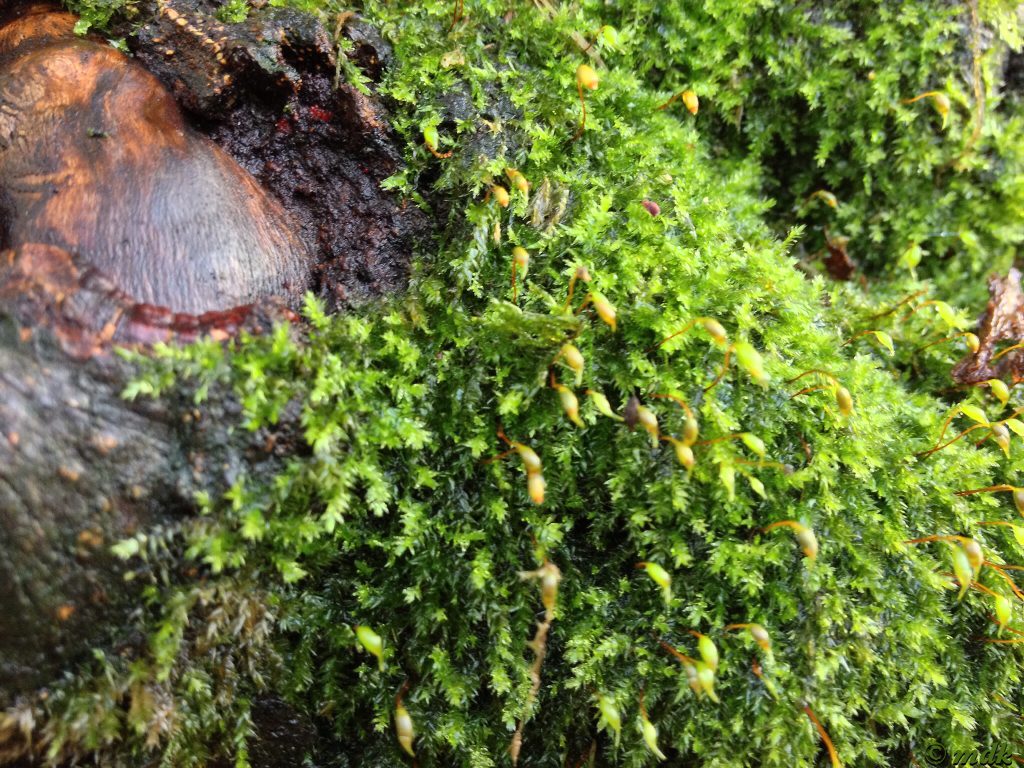 The sky was the most beautiful blue, the kind you only seem to get on cold, frosty days. I couldn’t help admiring the way the bare tree branches stood out against it, some golden, bathed in sun, others black as blown ink against the blue. Commando told me he’d seen lots of fallen trees on his last couple of park runs but along this path all the fallen trees were old and very rotten, certainly not casualties of the recent gales. One in particular caught my eye, a beautiful silver birch. Of course I couldn’t help stopping to take a closer look at the silvery white bark contrasting with the dark rotten wood. A little further on there was some leafy looking lichen, almost duck egg blue. 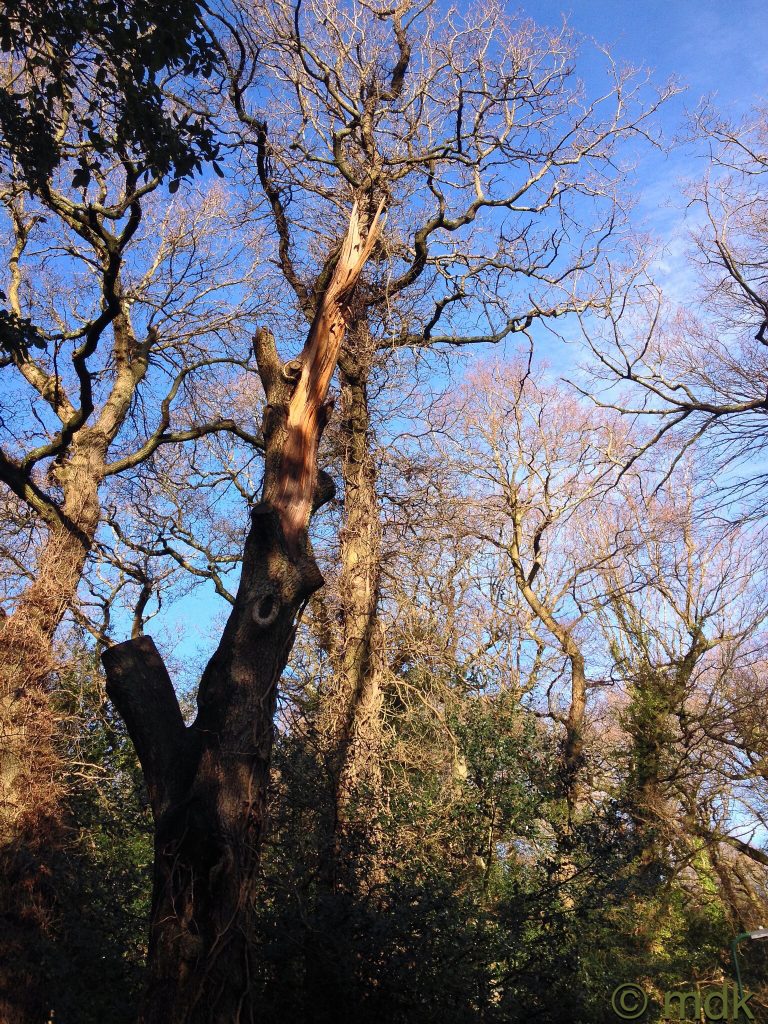 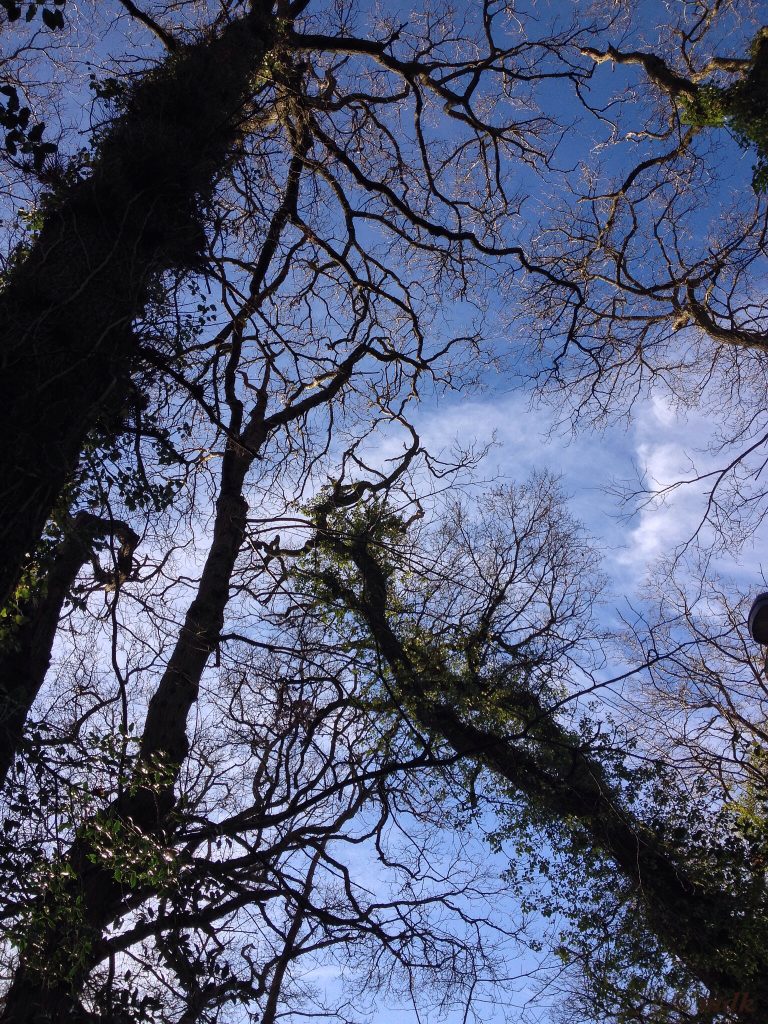 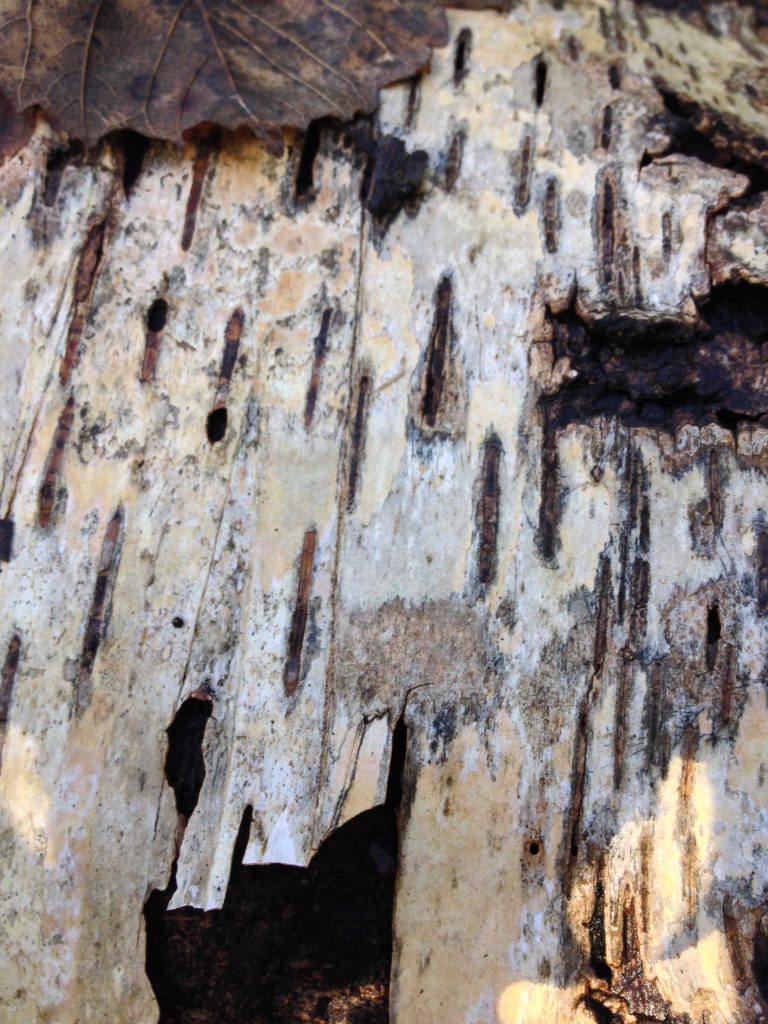 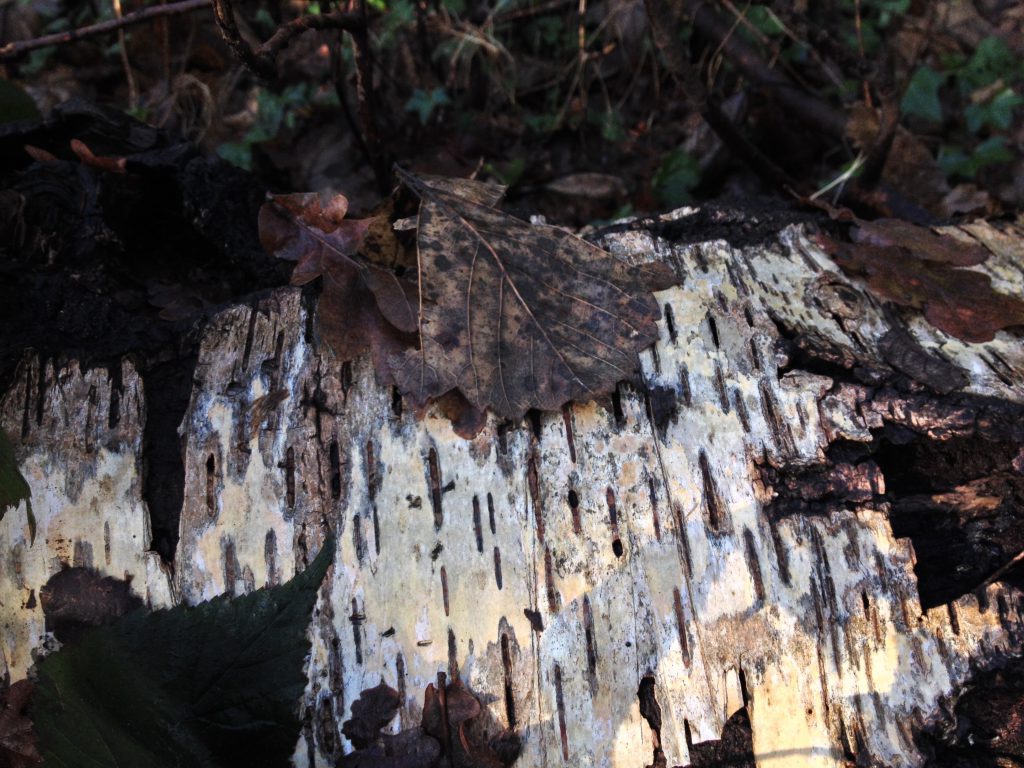 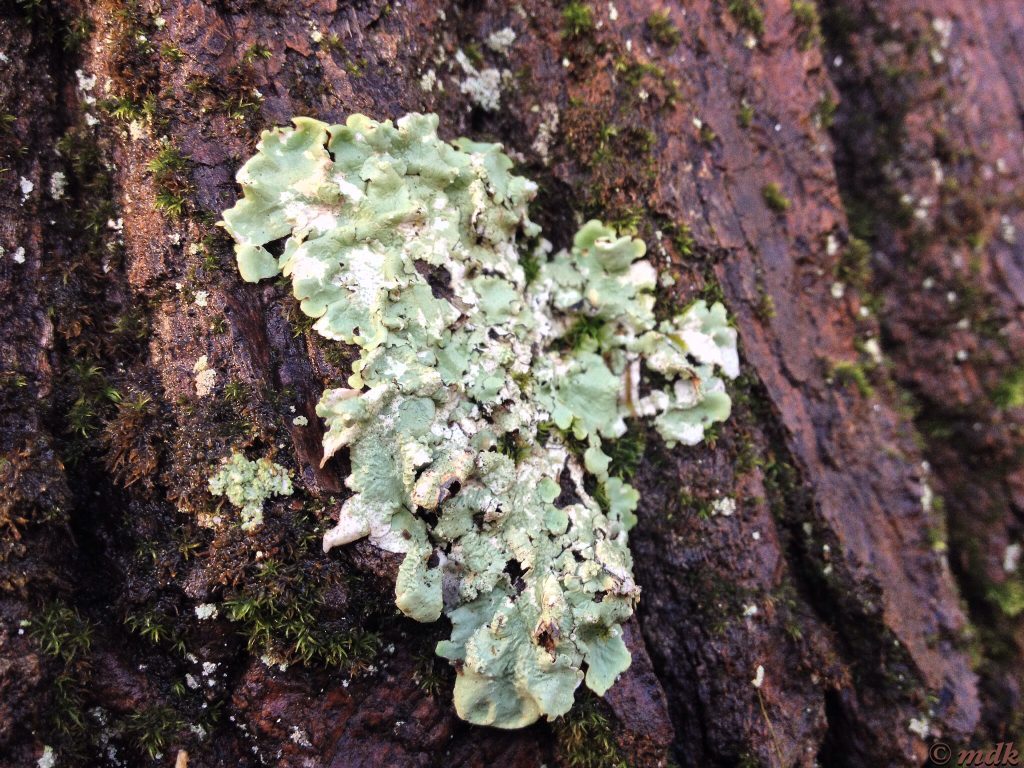 Southampton Common is large, three hundred and twenty six acres to be precise, bounded on one side by the University with two roads running through it, Highfield Avenue close to the uni and The Avenue, one of the main routes out of the city running through the centre. It’s made up of woodland, parkland and rough grassland, plus wetlands, ponds and lakes. Once I’d crossed Highfield Avenue I discovered that the frost had not all melted as I’d thought. As I walked across a patch of grassland I almost ended up sitting on it as my feet slid from under me. Then I spotted huge icy puddles on the grass, maybe they should have given me a clue. I took to the path. It it wasn’t much better and the leaf litter under the trees was still white despite the sun. 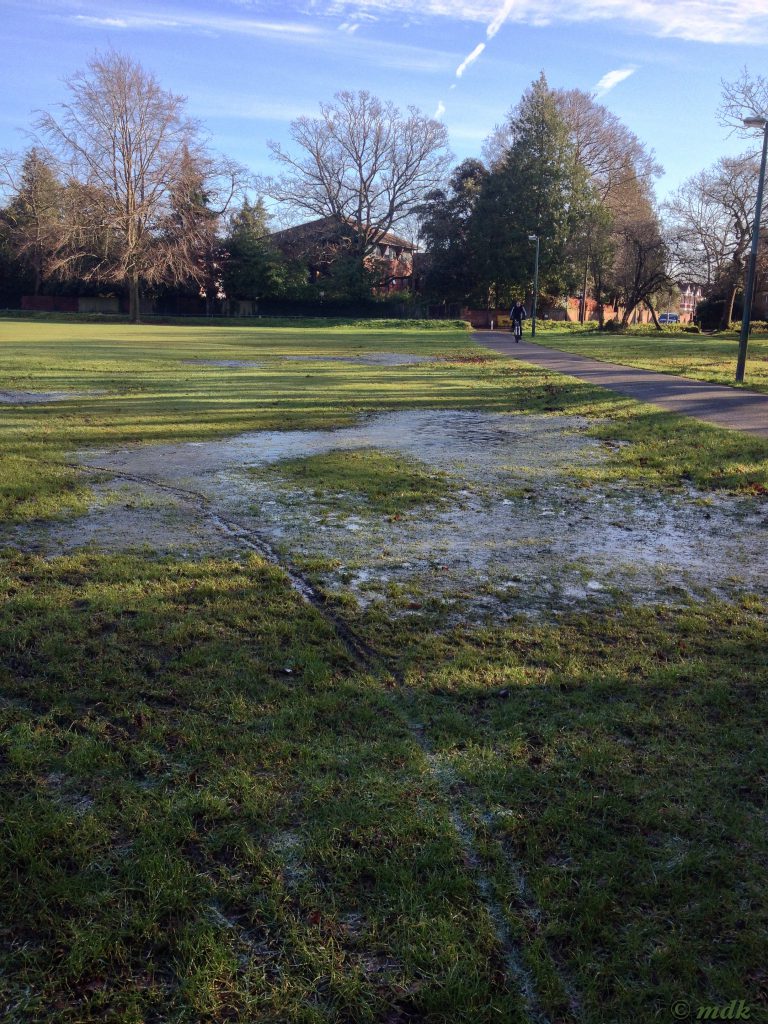 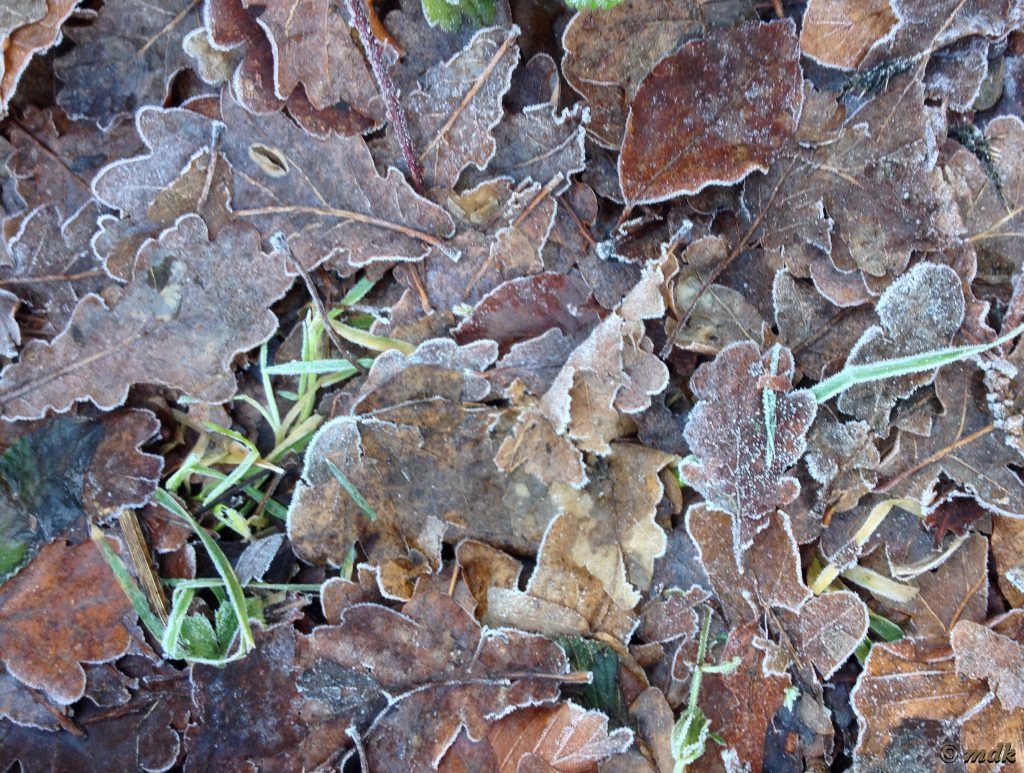 As I approached the underpass going beneath The Avenue a student in front of me did a kind of slide dance as he started down the slope. Not wishing to join in I took it very gingerly, stopping to look at some of the graffiti that almost completely obliterates any paint that may have once been there. Mostly graffiti is an eyesore but sometimes it’s almost a work of art. Both types decorate the underpass but the good stuff is very good. One piece, a stylised flower bud, all blues, pinks and oranges really caught my eye. If all graffiti was like that I wouldn’t mind it at all. 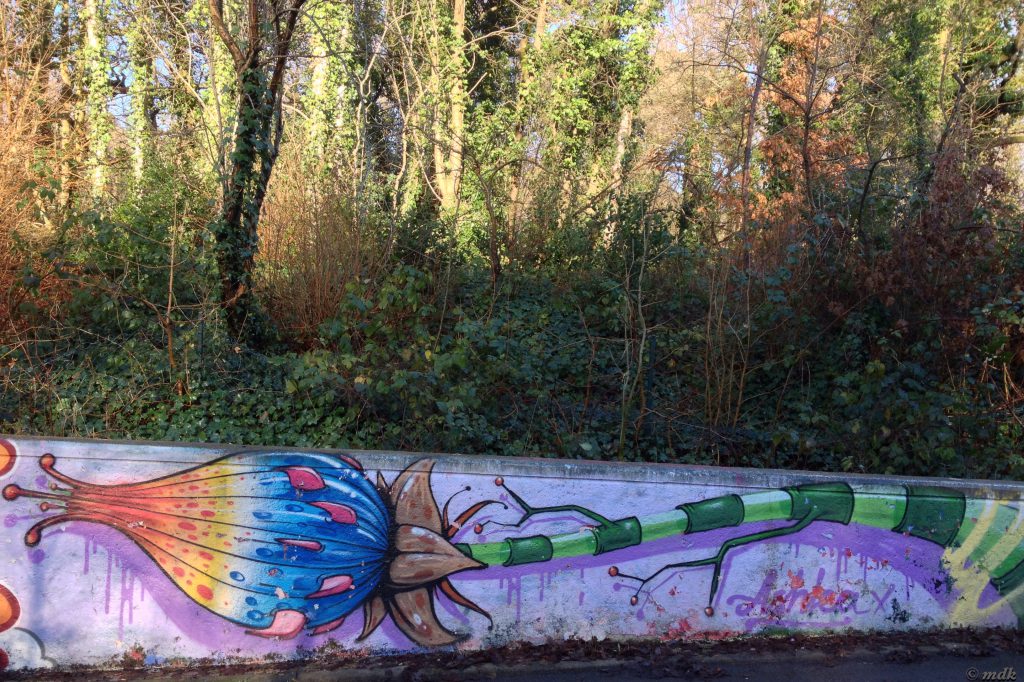 The roots of the Common go back to a land dispute in the thirteenth century which ended with the Borough buying the land and converting it to common land. This allowed the people of Southampton to gather fuel, clay, berries and the like and use it for grazing their animals. There was actually a cowherd paid to look after all the cattle. He was given a house which is now a pub called the Cowherds. Of course there are no cattle these days.

On the other side of the underpass is the Showground, once home to the Southampton Show and the Balloon Festival. Sadly, in these times of recession, neither have been held for some years. It’s a wide open space of grassland mostly filled with seagulls and crows today. Keeping close to the trees I crossed Coronation Aveune, one of the paved paths used for Park Runs, and made my way towards the ornamental lake. I didn’t have a real plan, it was more a case of letting my feet lead me. 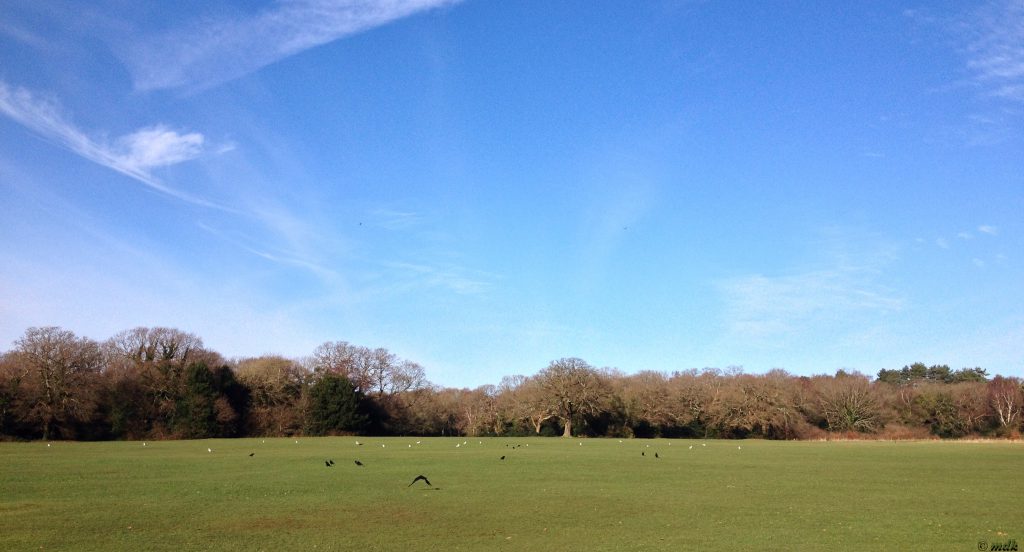 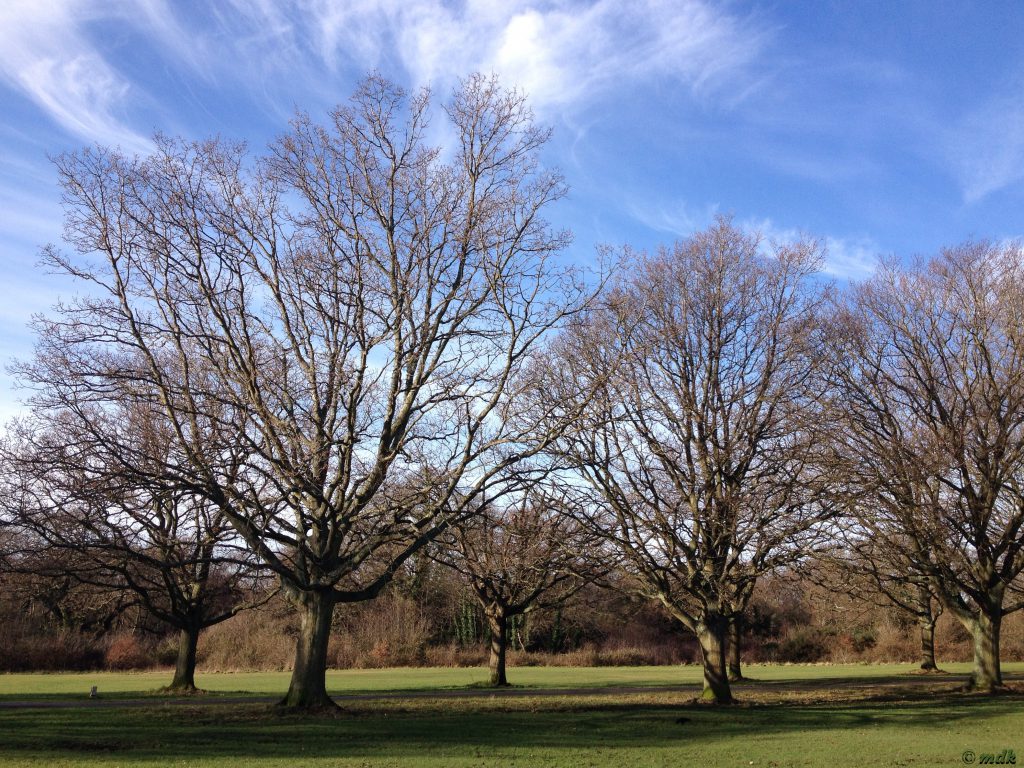 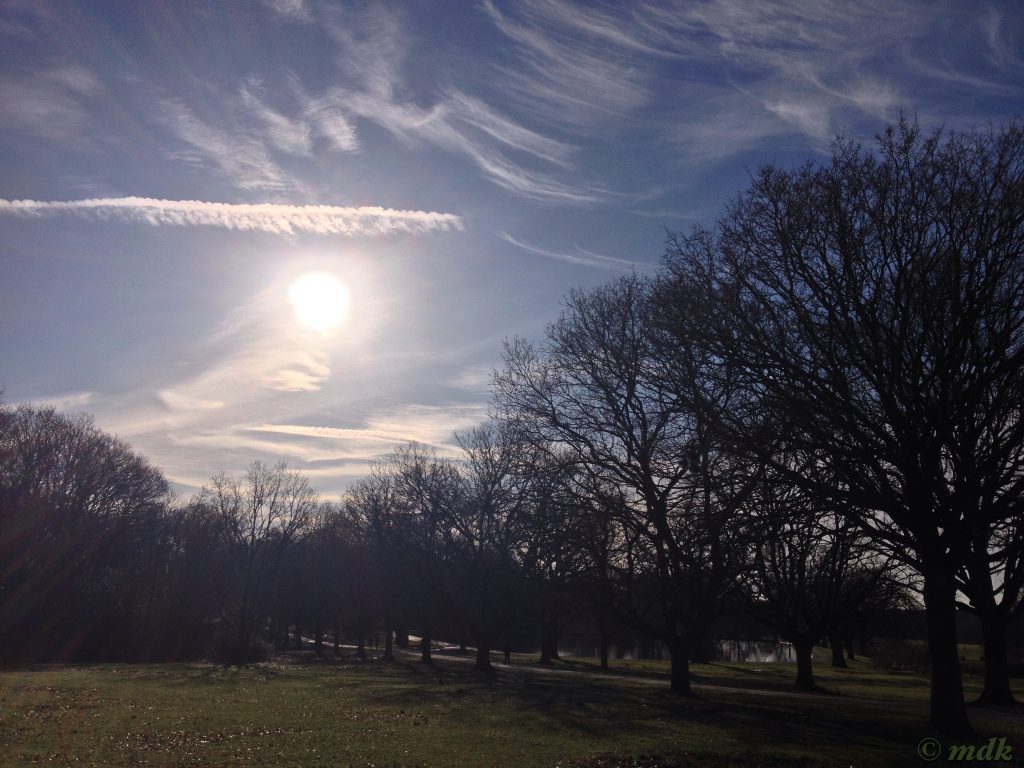 In the distance the Model Yachting Lake was empty which was a shame. I might have gone that way instead if there’d been any yachts to see. Instead I contented myself with looking at the trees. There’s something about bare branches, the different colours of the twigs, ivy clambering through, the contorted shapes, that makes me want to go home and paint them. It’s been a lot of years since I wielded a paintbrush in anger though, I’ve probably forgotten how by now I should think. 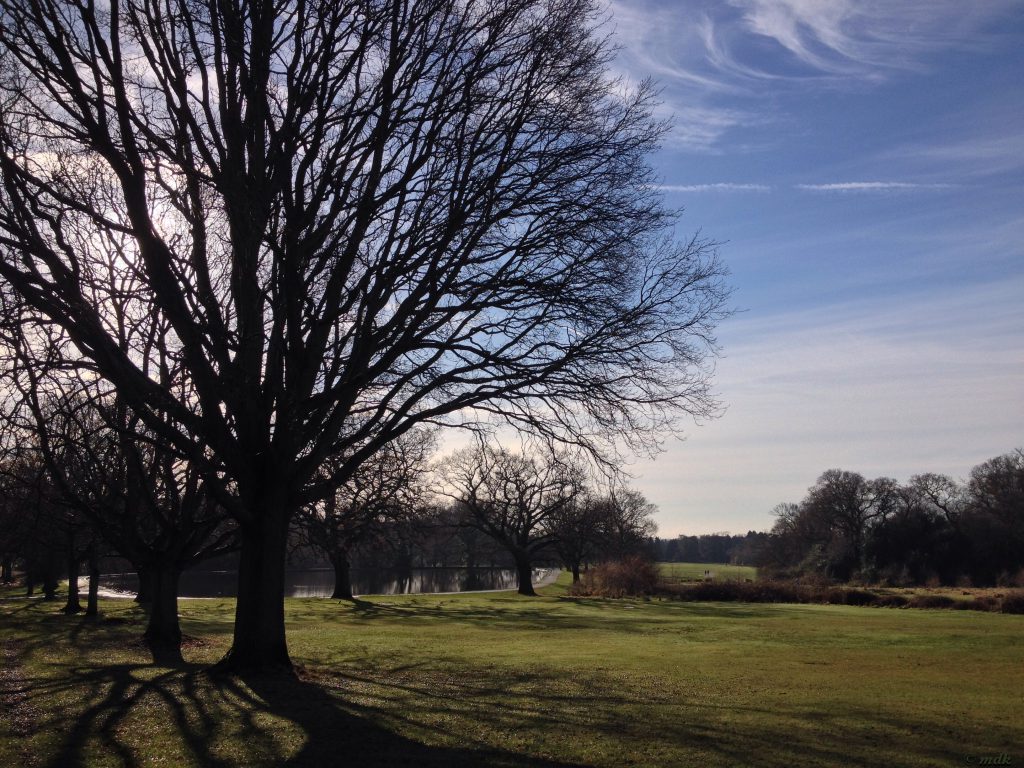 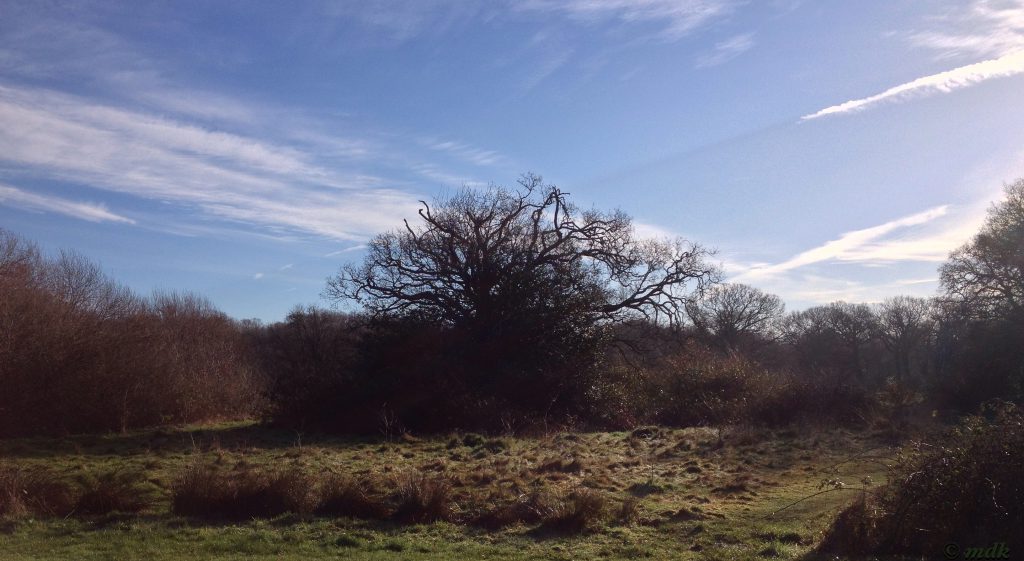 Then there was the ornamental lake, all those trees reflected in the water. I’m surprised the banks weren’t lined with artists and easels but it was just me and my phone taking photos. The water was like a mirror, every tree had a twin in the lake. When I saw a swan feather floating close to the bank I crouched down to take a picture, looking at it, it seemed I’d taken it upside down a feather floating in the sky above the trees. I had to take another shot to show both trees and reflections but, sadly, the feather had floated away by then. 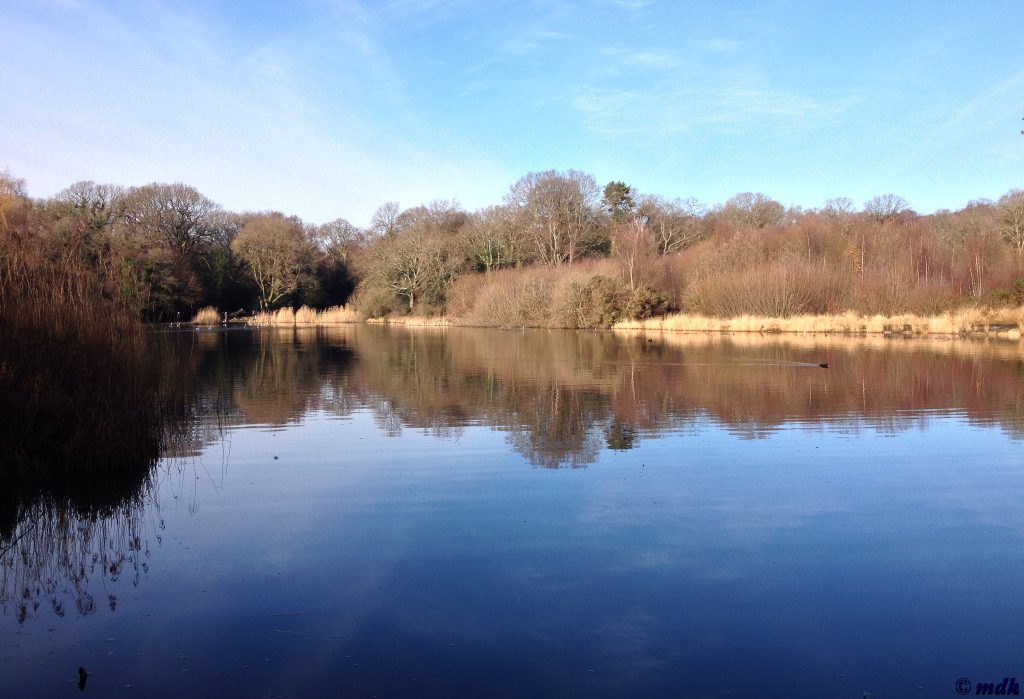 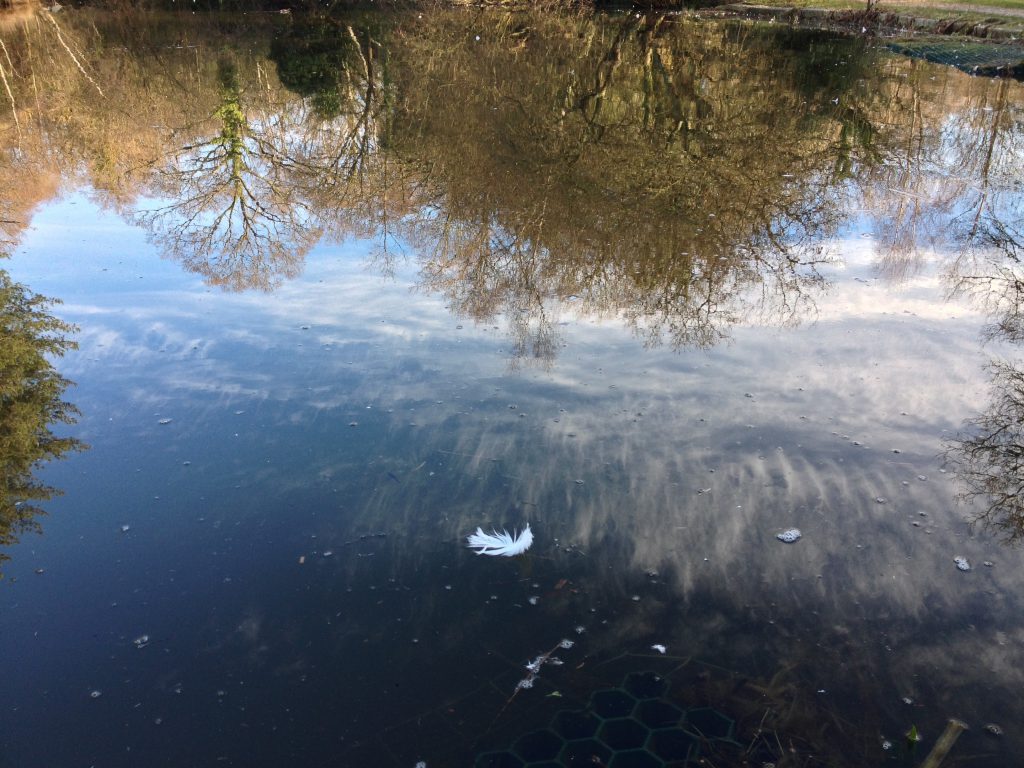 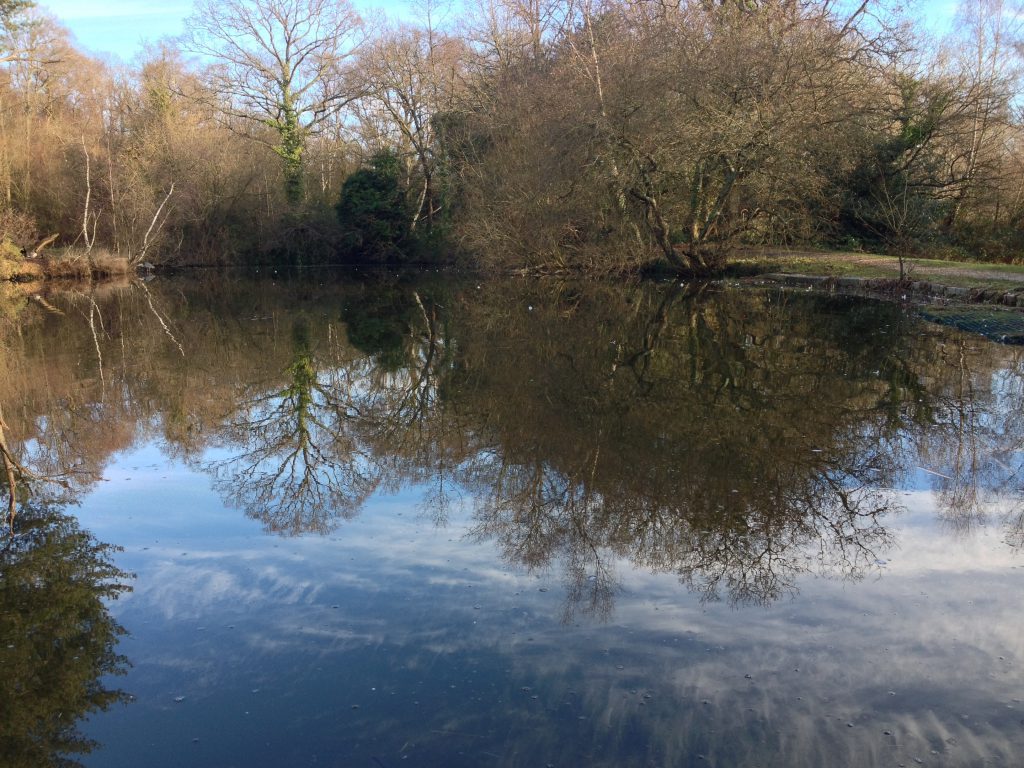 The edges of the lake were frozen into long puckered fingers reflecting the reeds underneath. The colours of the bare twigs were shadows of the autumn colours, golds, greens and reds and at the other end of the pond swans were gathered. A little girl and her mum were throwing bread. I stopped for a while to watch the swan family, parents with four almost adult cygnets, grey baby feathers nearly gone. 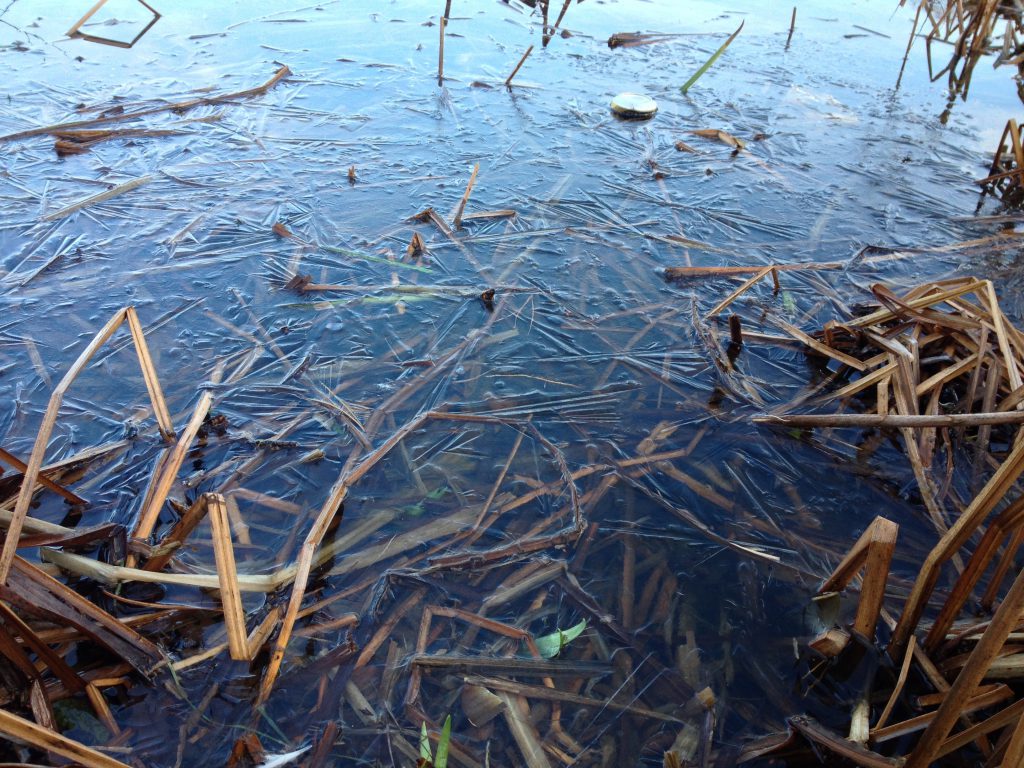 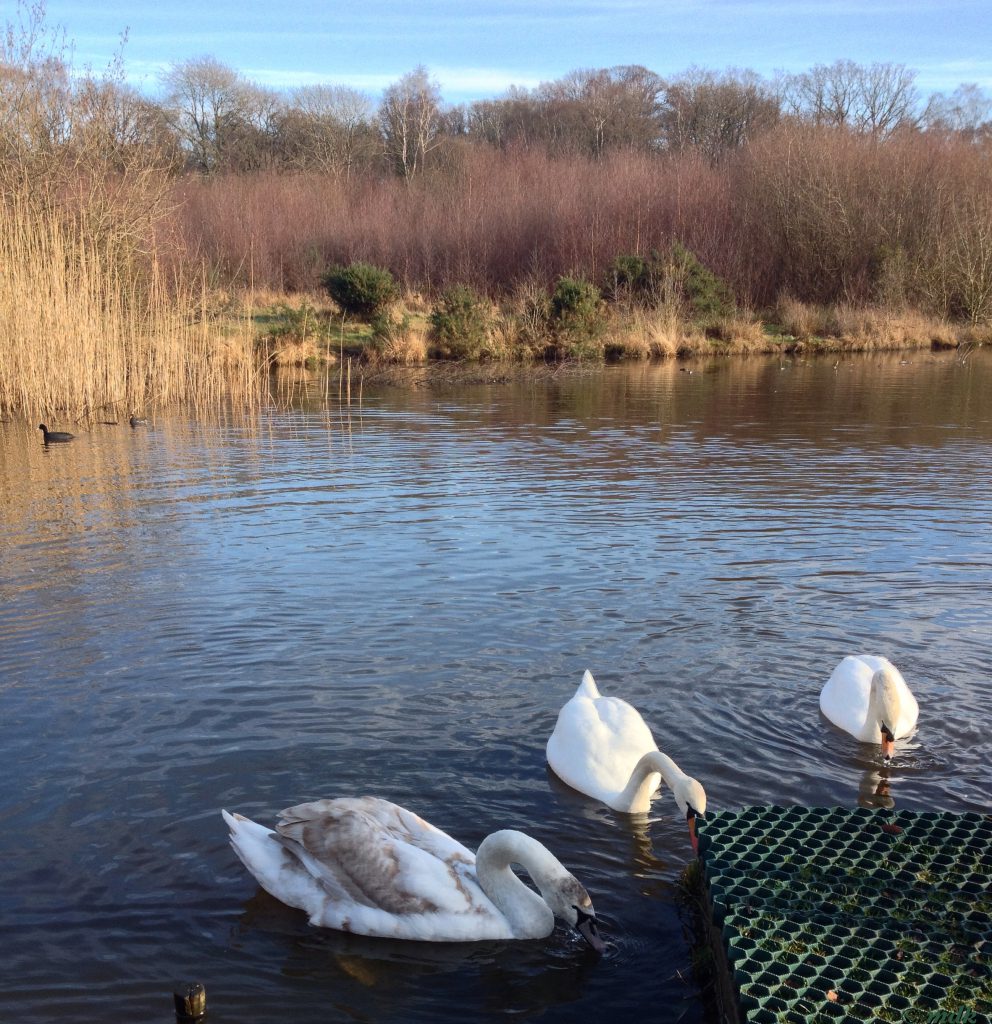 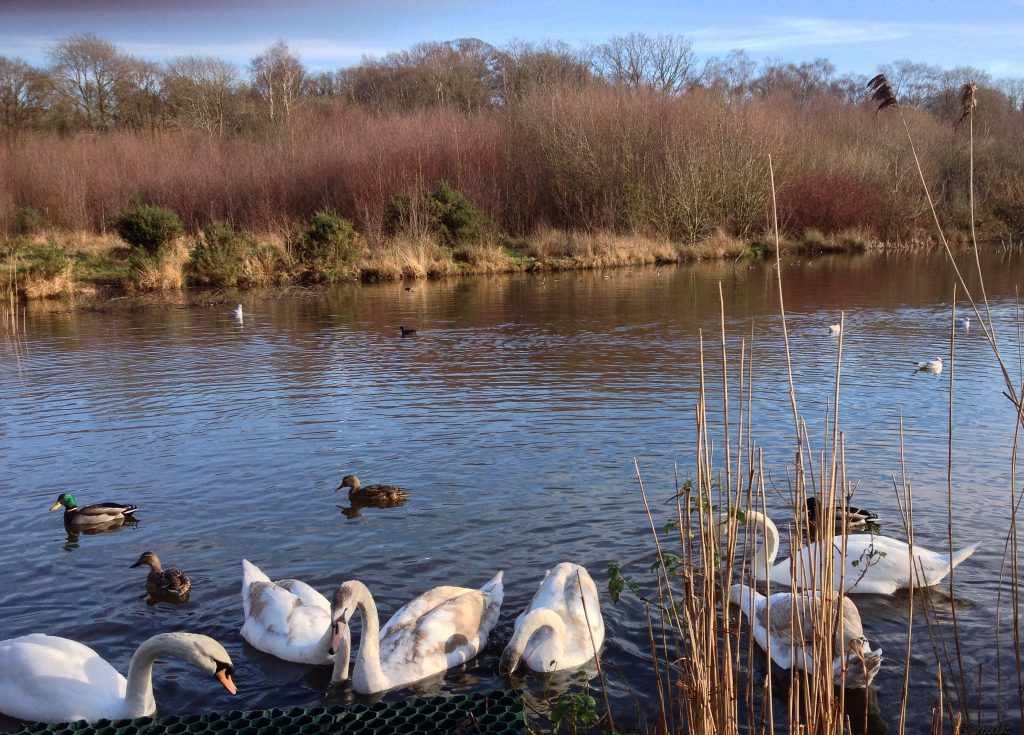 So far I’d seen no fallen trees. I was beginning to suspect Commando made it up just to get me out for a walk.