My visit to the Common in mid January 2014 was mainly to take a look at the fallen trees Commando had told me about. After walking for more than four miles, the only fallen trees I’d seen were old and rotten. Still, it was a lovely day and I’d seen swans on the lake so I wasn’t complaining. Back then my real aim was finding things to make me smile.

As soon as I left the lake I saw a pile of logs by the edge of the path. This was what Commando had been talking about. There really is nothing quite as sad as a tree downed in its prime and this was quite a big tree by the look if it. The council had been in and chopped it into logs, probably because it was blocking the path. There were an awful lot of logs and sawdust everywhere. When I looked closer I could see it had taken a few branches from a neighbouring tree as it fell. 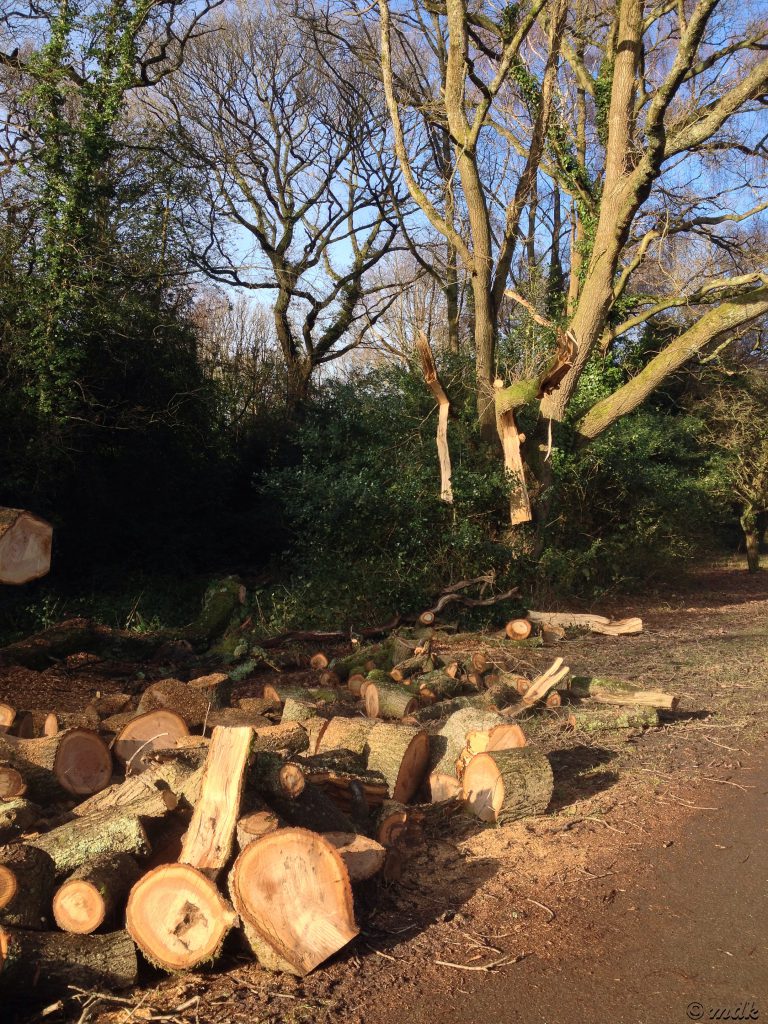 While I was taking photos of the tree a young couple walked past me, a slim dark haired girl and a spiky haired young man. I walked up the path behind them and pretty soon I noticed the girl seemed to be staggering and the man was more or less holding her up while she giggled and stumbled her feet going in odd directions. She was blind drunk and at half eleven in the morning. When I heard her say, “I think I feel sick,” I dropped back a bit. While I was shaking my head at their antics I spotted houses at the end of the path a little way ahead. It was Hill Lane. Somehow I’d been so distracted by the tree and the young couple I’d gone the wrong way, turned right when I should have turned left. There was nothing for it but to go back the way I’d come.

That’s the problem with The Common, there are so many paths and little trails it’s easy to get confused or lose your sense of direction. As I approached the point where I’d gone wrong I could see the pile of logs again. Clouds of steam were rising as the sun warmed them. All the way down Carriage Drive (in the right direction this time) there were trees blown down by the gales. They’d all been chopped up so the paths were clear but the logs seem to have been left. Whether the council are going to come back and collect them at some point or whether they are there to rot down and attract wild life and fungi remains to be seen. Some of the trees were fairly young and small, others huge mature specimens. It may be nature’s way but it’s still sad to see an old tree in pieces on the ground. 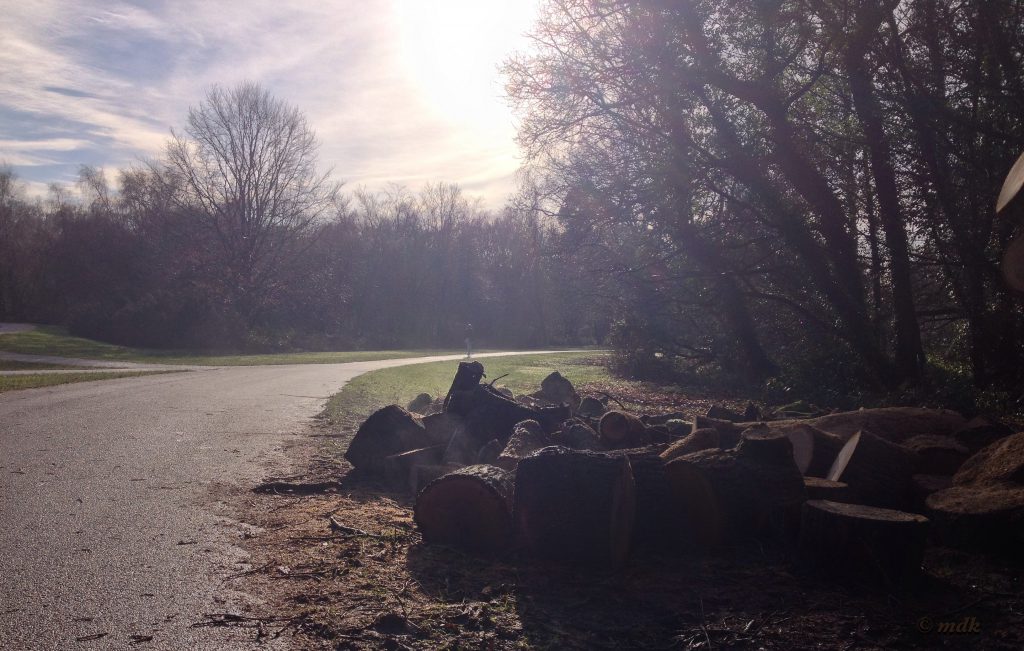 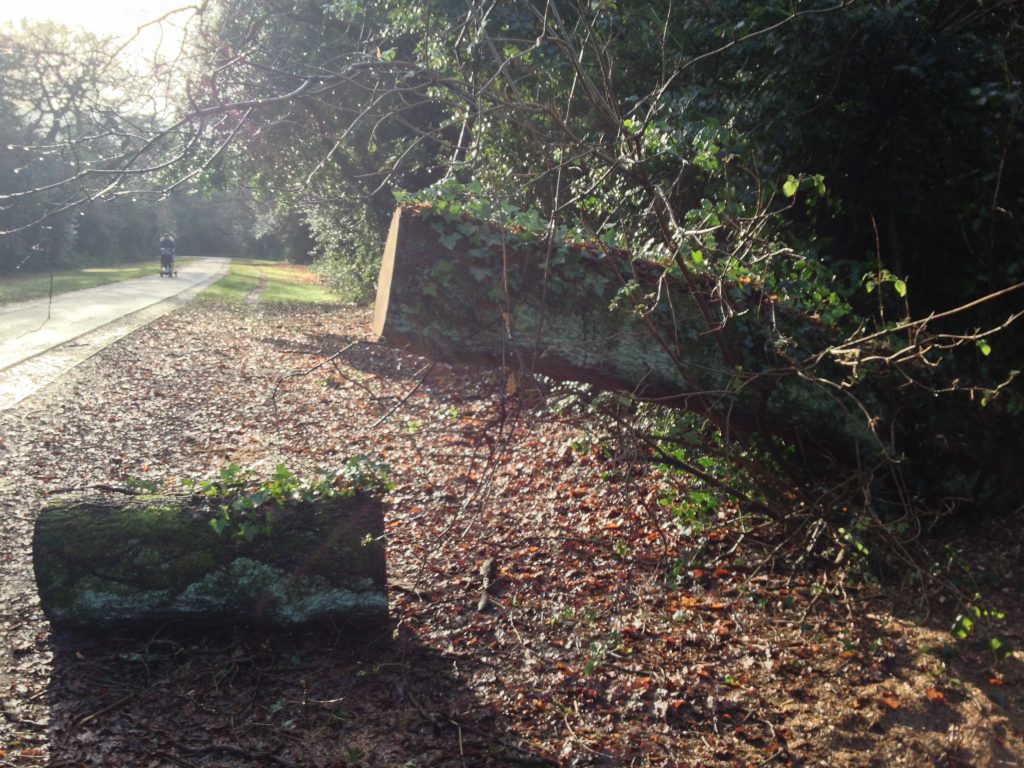 When I reached Cemetery Road the the first gates to the Old Cemetery I was dismayed to find them closed and padlocked. Looking through the bars though I could see people inside so I knew there must be another way in, it was just a matter of finding it. 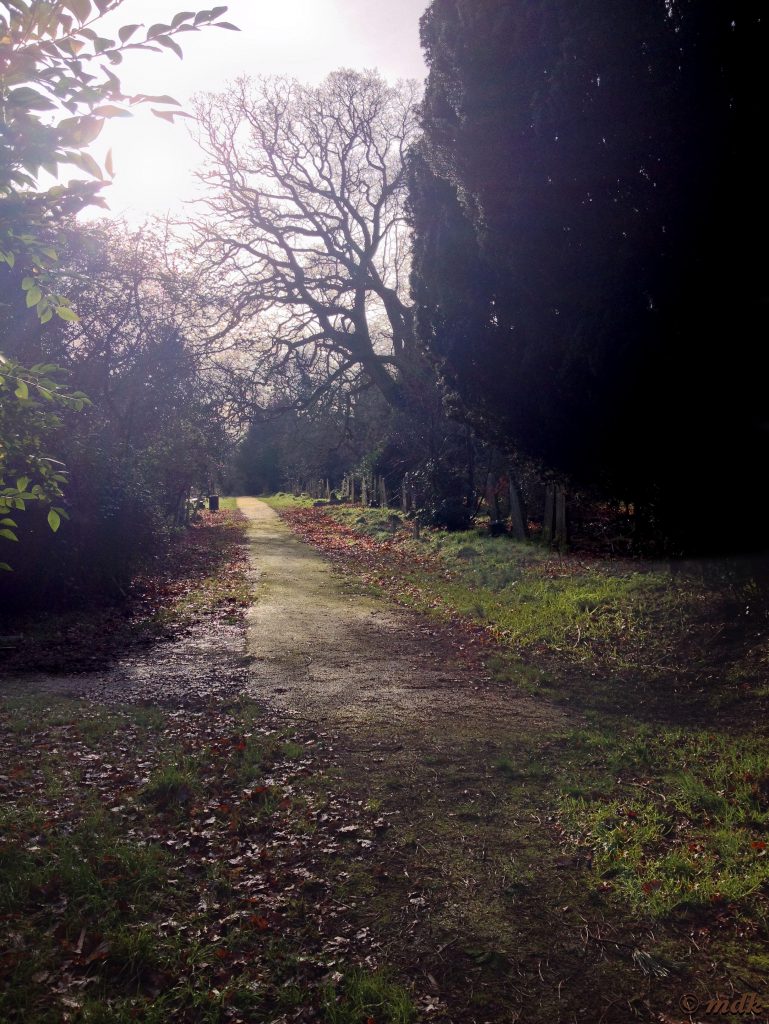 Feeling slightly disappointed I walked on, wondering if I’d ever get inside. Old cemeteries fascinate me, there are so many stories in them and this one was something I really wanted to explore. It came into being by Act of Parliament in 1843. This gave control of fifteen acres of common land to the council to be used as a cemetery. Claudius Loundon, a renowned landscape designer of the time was paid the princely sum of £37 to design the layout but the council decided not to use his plans. Seems like our wonderful council were always fairly free and easy with our money even then. In the end they held a competition. Only two sets of plans were put forwards and the winner was William Rogers, a local nurseryman and, surprise, surprise a councillor. Some things never change, it has always been more about who you know than what you know.

Soon I came to Cemetery lake, often called The Duck Pond. There were a few ducks milling about along with a lot of seagulls. You can’t turn around without bumping into a seagull in Southampton it seems. The lake is artificial, created in the 1880’s from a disused gravel pit. I didn’t dally too long though because I thought I could spot another gate a little further ahead. I was right, there was a gate and it was open, although a huge tree stump blocked half of it. In I went with a cheery good morning to the man pinning something to the notice board just inside. Now I could wander to my hearts content, stopping every so often to read an inscription. Some graves contained whole families, strings of names, wife, child, husband with names in order of when they were buried. Often there is a story there to see, a child just a year old, a mother thirty odd years later, husband fourteen years after that. I can almost imagine their lives, always knowing the grave and their loved ones are waiting. Some stones look new but their inscriptions tell a different story. On others the writing is frustratingly worn away, the story lost. 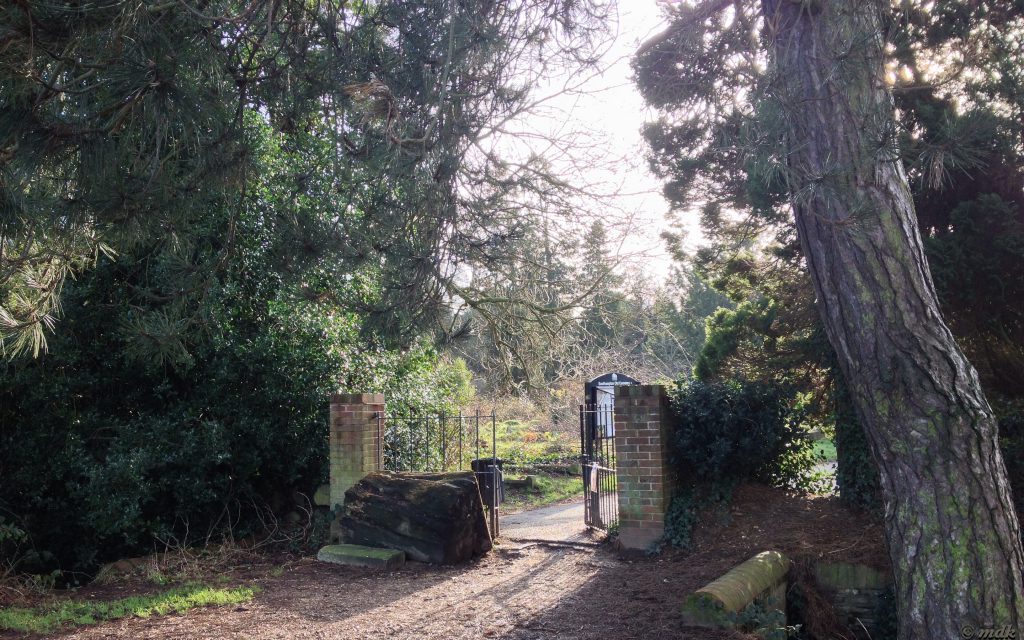 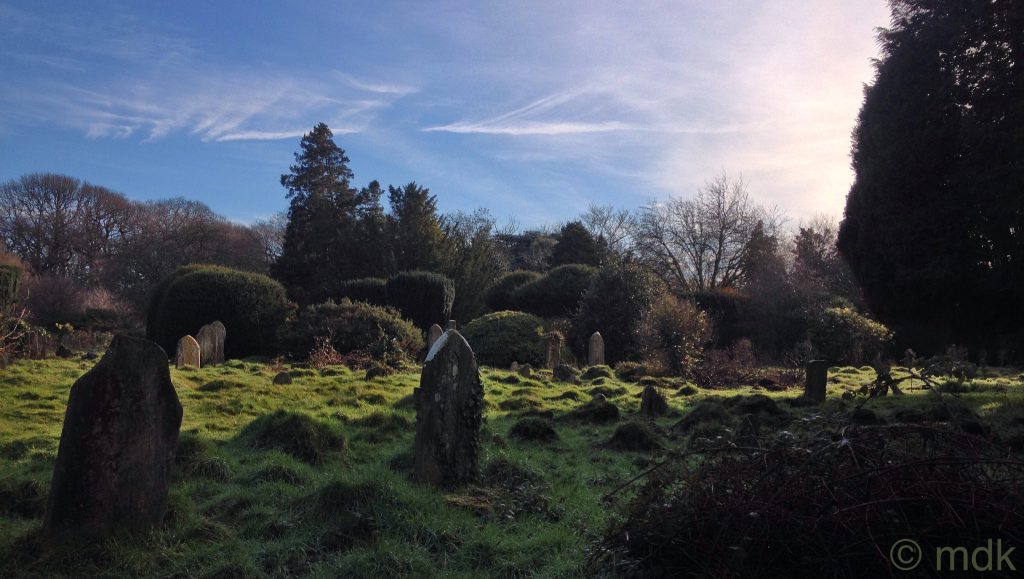 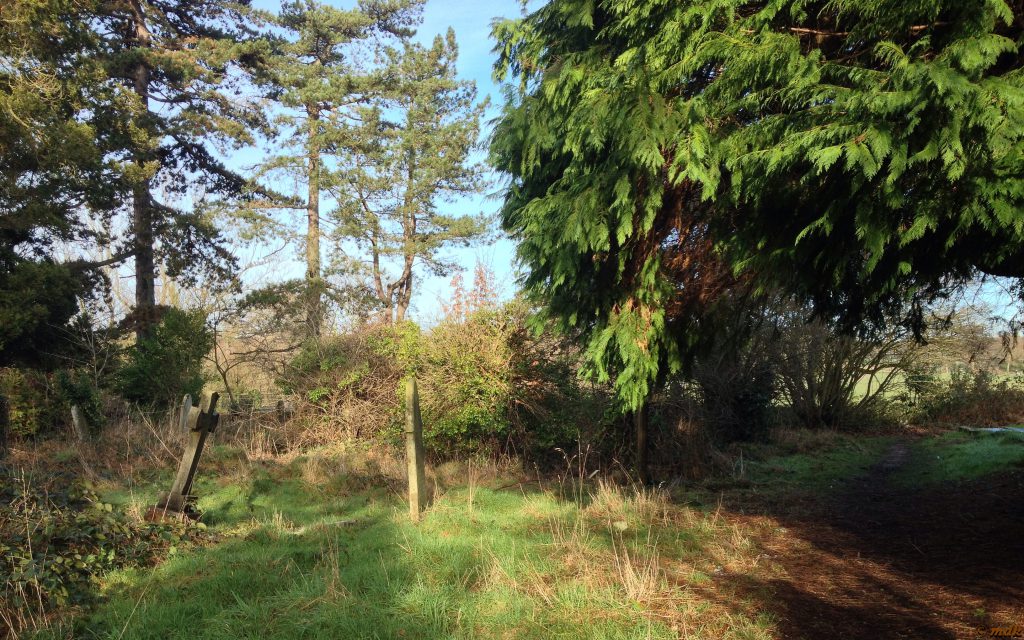 Many stones have fallen, now almost hidden by grass or ivy, other graves have collapsed leaving just a dip in the earth, nature taking over, while others still lean together like old friends or lovers. There are many paths to choose from and I didn’t have time to explore them all so I had to choose the ones that caught my interest. Some were muddy, others had me stooping to go beneath low branches. The cemetery finally opened in 1846, one of the first cemeteries to be owned by a local council. At first the site covered just ten acres but in 1869 it expanded to encompass the final five allowed by the parliamentary act. The third and final phase came in the 1880’s with an avenue of yew tress added. Today the yews are huge towering things overshadowing the graves. Sadly the graves have not been untouched by fallen trees. The mangled remains mingle with the stones. Hopefully they weren’t badly damaged. I strolled slowly along, enjoying the peace and tranquility and thinking about all the people lying there beneath the earth, many lived lives much shorter than mine. It made me remember the impermanence of all things. Everything passes, all our sorrows and our joys. 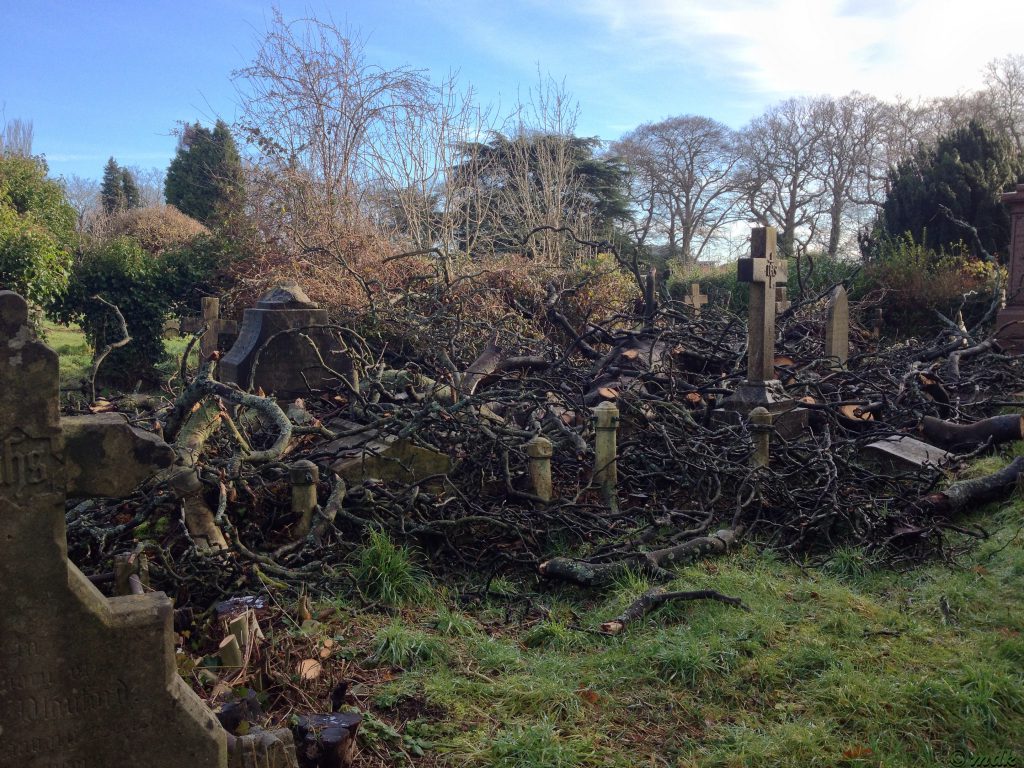 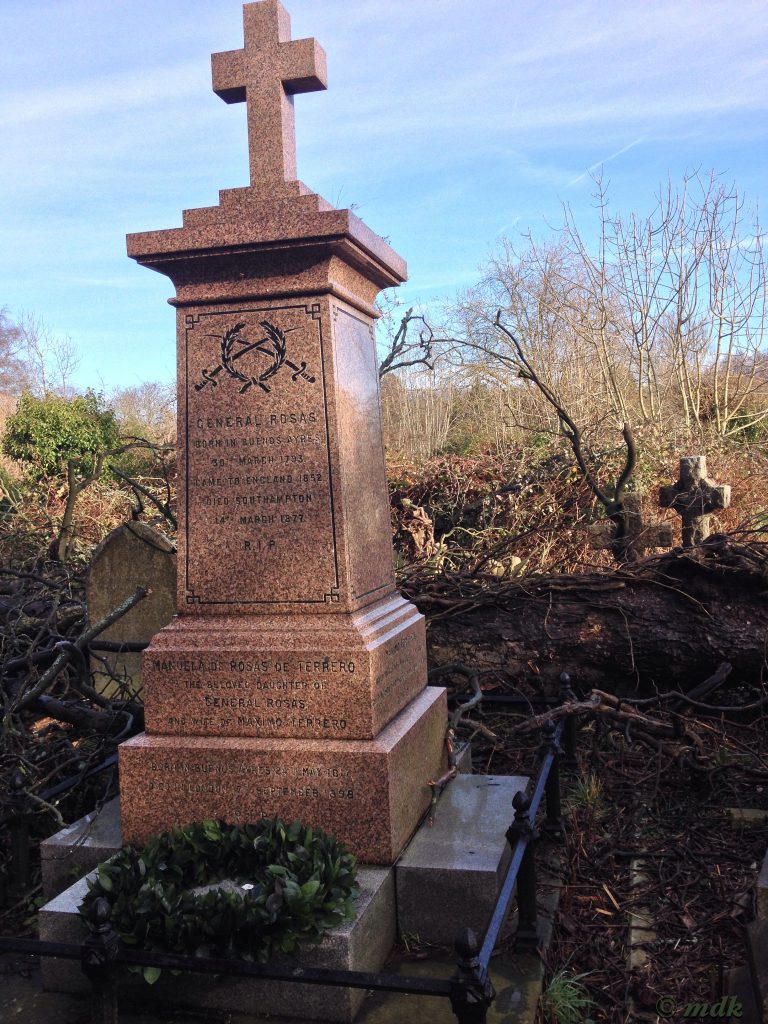 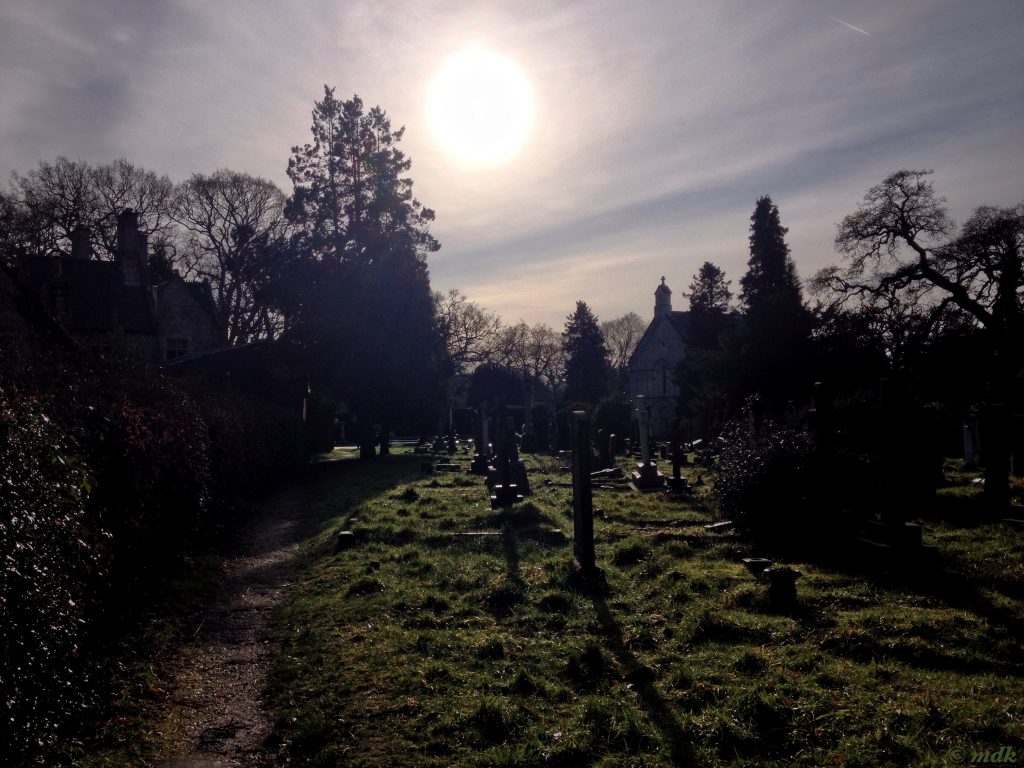 The cemetery now covers twenty seven acres and more than a hundred and sixteen thousand people have been buried there. Even today a handful of burials take place each year, people being added to family plots. There are three chapels, Church of England, Nonconformist and Jewish plus a lodge. The Church of England chapel is used as a design studio these days and the Nonconformist one for storage for a charity. The lodge and the Jewish chapel are now private houses. It’s a beautiful, if slightly eerie place to live. When I came to one of the chapels (I’m not sure which) and the lodge I knew it was time to start making my way home. Just one more photo of the gate and another of the lodge and I was walking back towards the road. 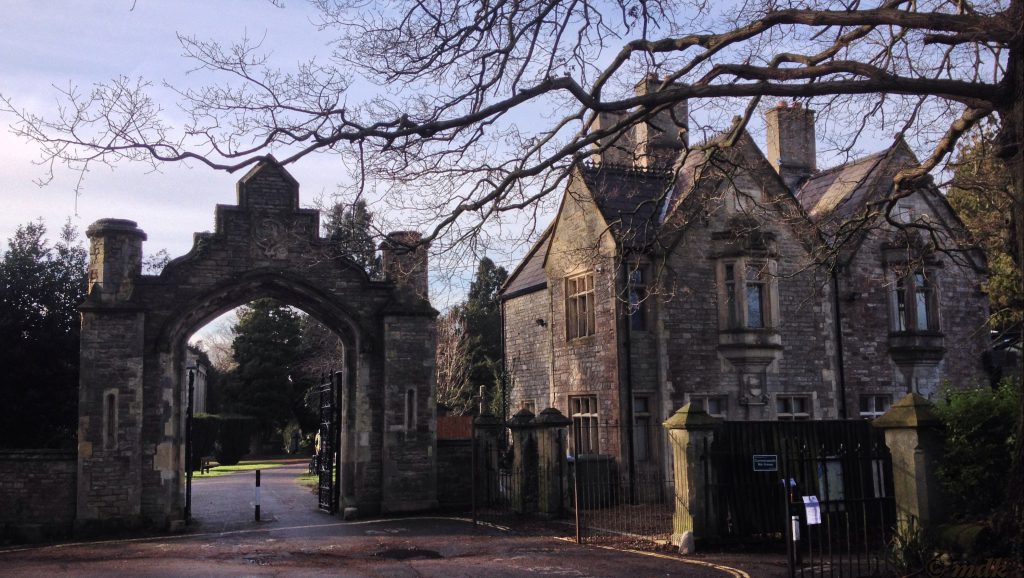 My feet took me down Hill Lane past the old football stadium, The Dell. With no thought at all I followed the footsteps of so many walks home from the stadium. I could almost see a little blonde haired, blue eyed boy walking alongside me, CJ fifteen or more years ago, walking along low walls, grabbing my hand to cross the road. Where did all the time go?

In Watts Park, close to the cenotaph, there are roses flowering. Strange to see a rose blooming in January but it’s been a strange winter. Across the road one of the big park trees has been split in two by the gales. As I came to the end of the park I knew I was coming to the end of my walk, more than eight miles to add to my total for the month. Not a bad morning’s exercise and an interesting and thought provoking walk.