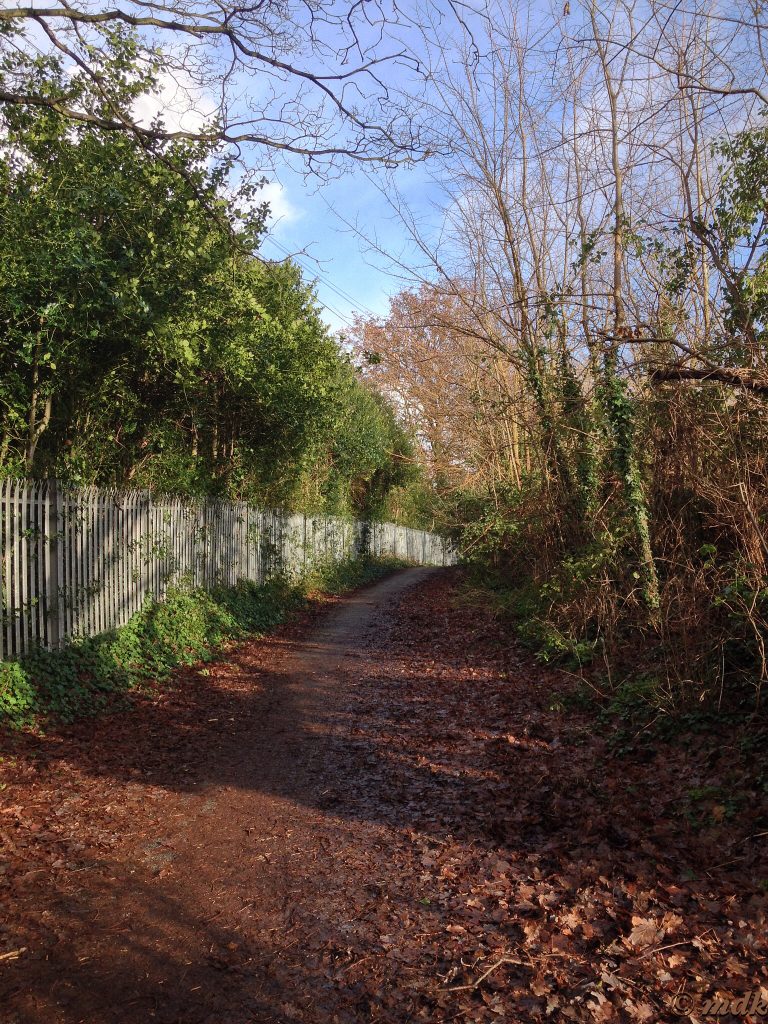 The beginning of 2014 was all about job hunting for me. In between scouring the job sites for likely work, sending off applications and fretting about the ones I’d already applied for, I walked. Sometimes there were great plans and long walks, other times just wanderings, meandering from place to place thinking and trying to find little things to make me smile.

Once I’d done my job search and, incidentally, applied for a record number of jobs then had a bit of a clean up I decided to take a walk to Hobbycraft on Mansbridge Road. There was no big plan, just an idea they might have something else of interest that didn’t cost much and would fill an hour or two. Besides, it’s quite a nice walk and it looked like a niceish day.

There wasn’t much of a plan on the route front either. When I left home I was going to go up the Big Hill and pick up Cutbush Lane. The wind was blowing straight down the hill quite fiercely though so I decided to go a different way and walk through Townhill Park, meeting Cutbush Lane where it bends. The weather forecast had said there might be rain but it looked bright enough so I was hoping it was wrong.

There were blue skies and white clouds as I walked along the lane, unlike last time when the rain was falling. I took my phone out to take a photo and saw I had a voicemail message from Arabella, she wanted me to call her when I had a moment. When I got to the open fields the distant sky looked quite rain like and I had the feeling I would be wet before I got home. Still, while it was dry I took advantage and kept an eye out for interesting fungi and plants. Not long after the fields I was rewarded. 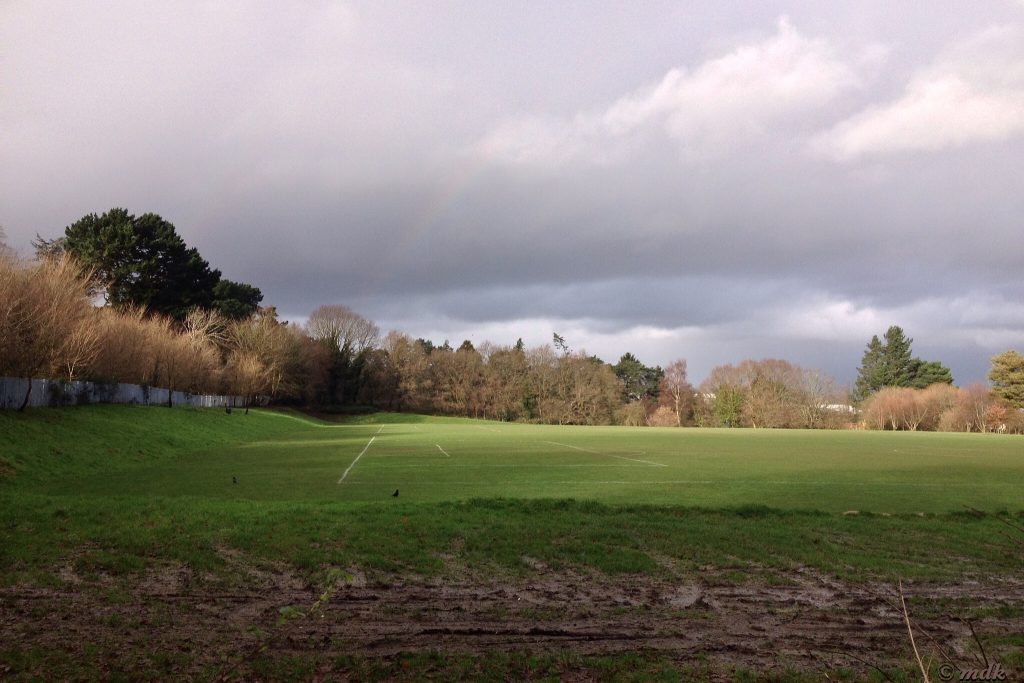 On an old rotten log amongst all the leaf debris there was a huge mushroom. Slimy and curled up as if it was on its last legs It looked like it was melting. If course I stopped to take photos and, after Googling a few guides I think it may be Pholiota astragalina or something very similar. Mushrooms and fungi are far tougher to identify than plants. 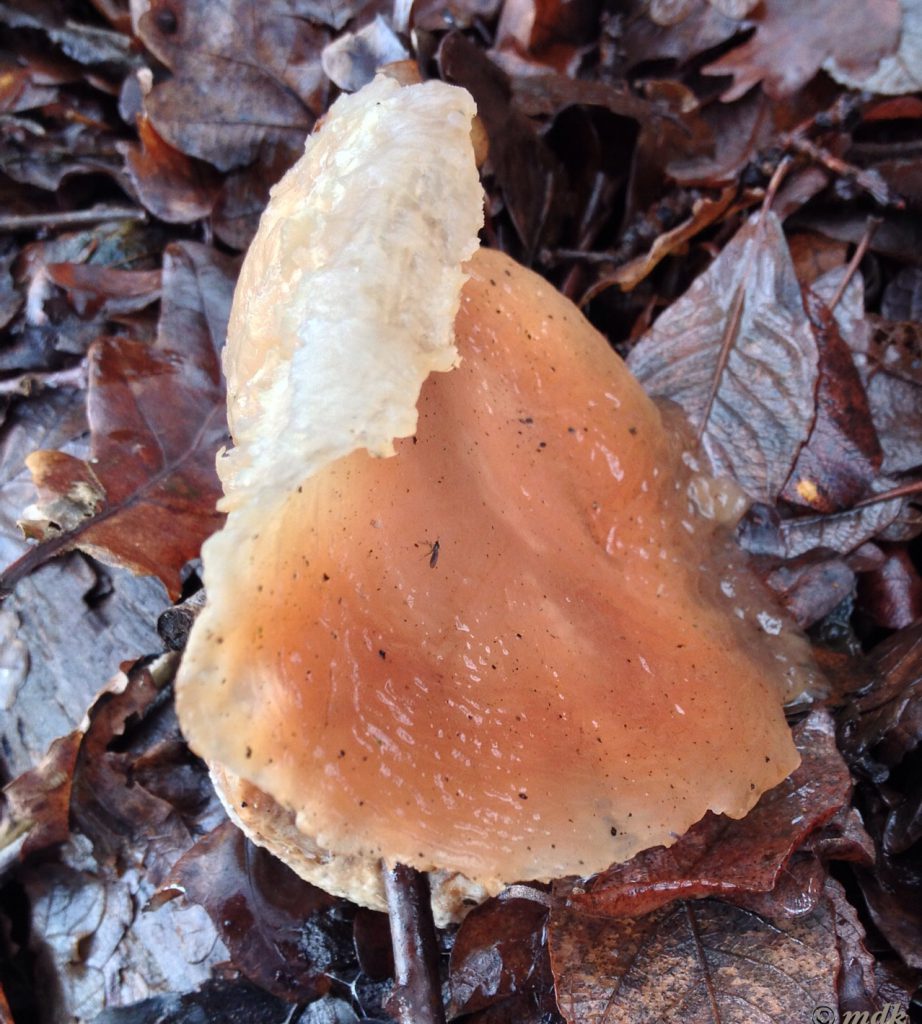 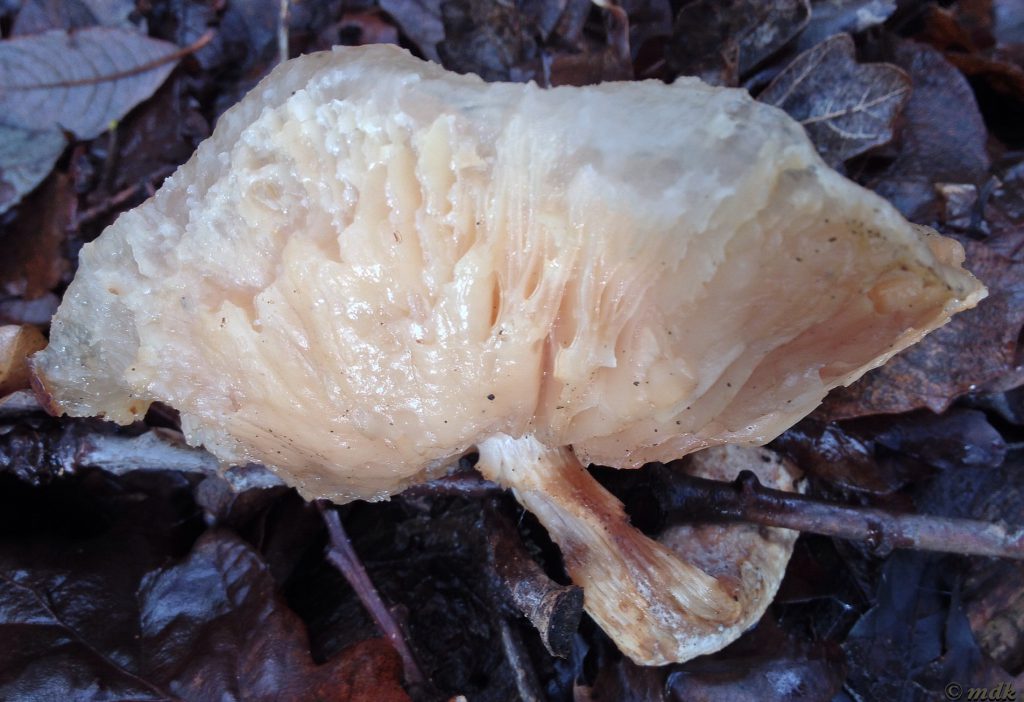 The sky behind Hobbycraft was black, in front it was blue. Sadly I’d be going towards the black not the blue. As it happened there wasn’t a lot to interest me inside, well, not that I could afford. Briefly I thought about going to the garden centre next door for a coffee and a chance to call Arabella. It was never a good plan, plants are too tempting, coffee costs money and I don’t like talking on the phone in public places. 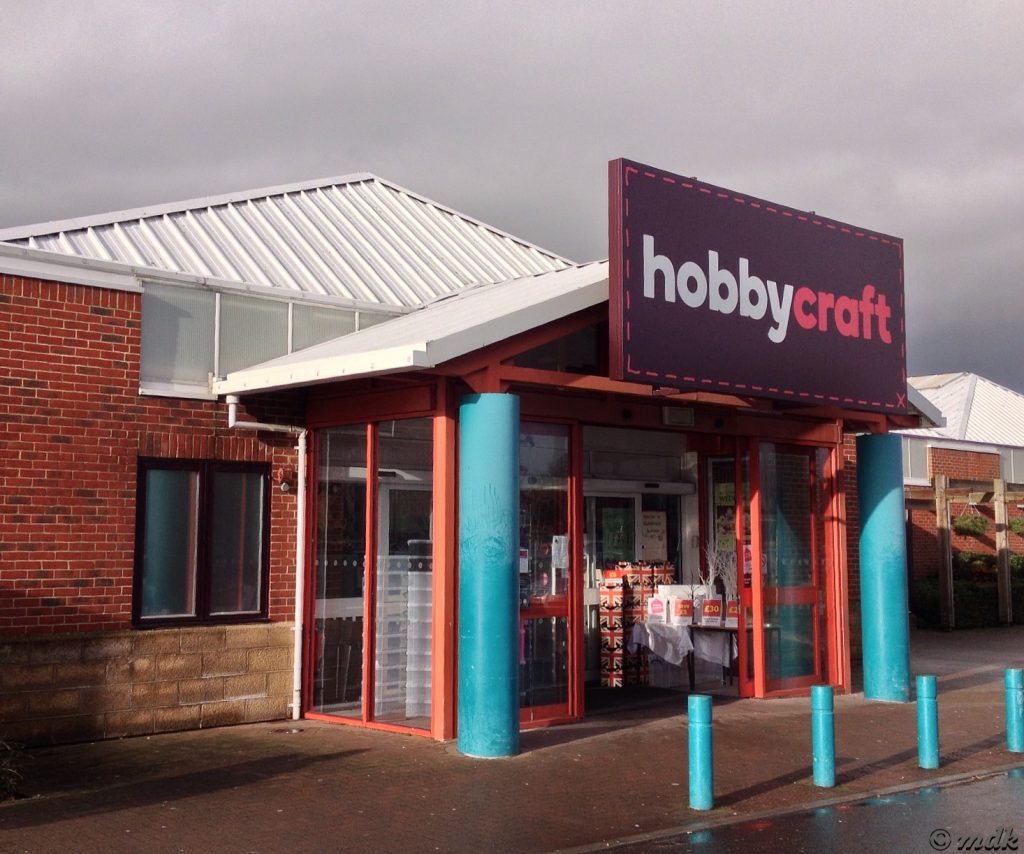 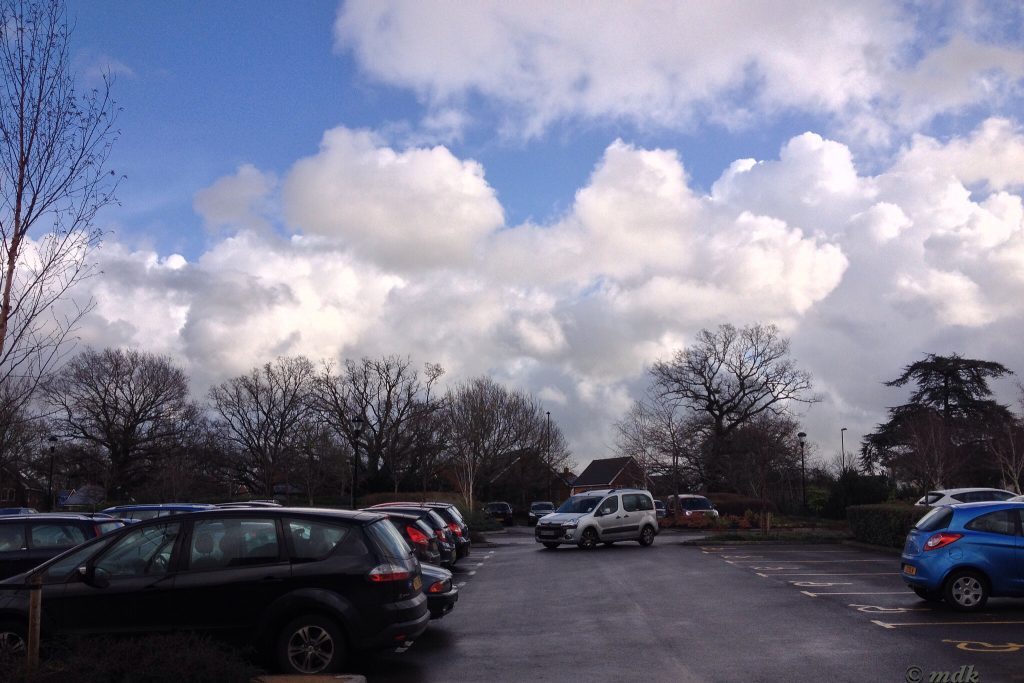 As I’d been walking I’d been thinking about routes home and half decided to go up towards Chalk Hill to the village and maybe pick up a paper for Commando on the way. The sky didn’t look good though and in the end I decided to go down towards the river. I’d be able to sit on a bench and call Arabella from there. At least I’d be walking down Gaters Hill instead of up which is always a bonus. Because the trees are leafless I could just about see the mill house across the road so, when I got to the bottom, I thought I’d go and see how close I could get. 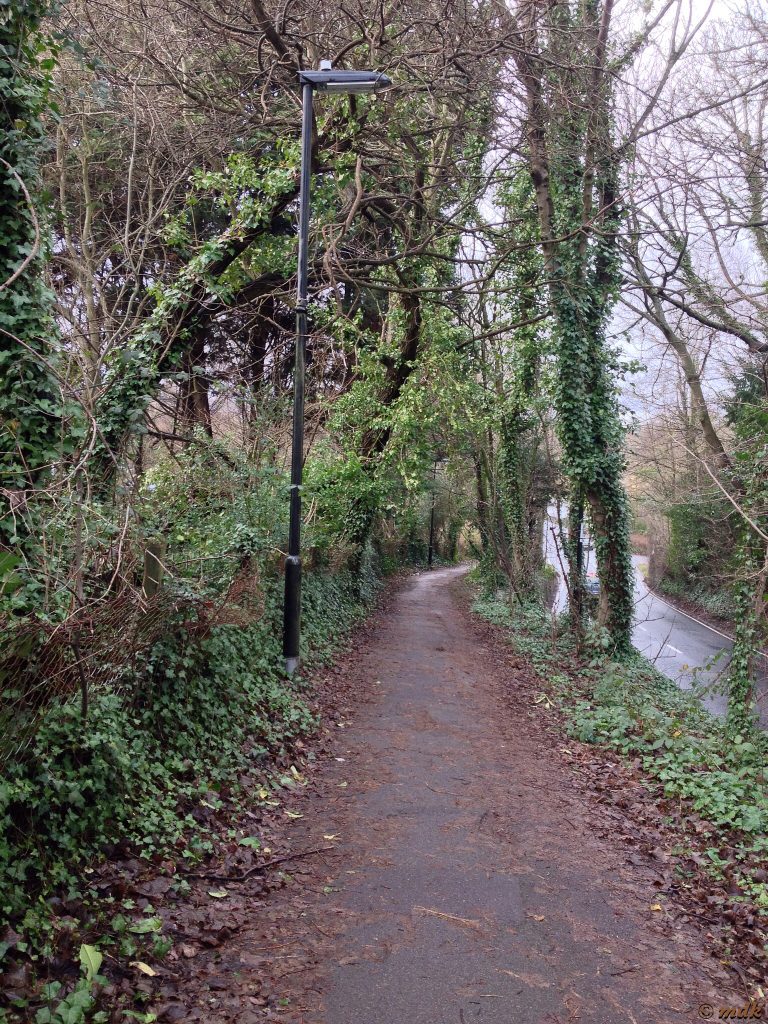 A while ago I wrote a post about the history of the mill but I’ve never actually stopped to look at it properly before, mainly because there is no footpath on that side of the road and it’s quite a tight bend. Today though, there wasn’t much traffic about so I crossed. There was a large sign saying private property no public access but I pretended I hadn’t seen it and walked as far towards the mill house as I dared. This wasn’t actually all that far because I could see a car in the car port so I knew someone was home. It’s quite a pretty little house, much modernised but the river was so high the top of the bridge was barely visible. I’d have liked to walk down the lane and look at the other buildings but I didn’t want an argument with the owner so I didn’t. 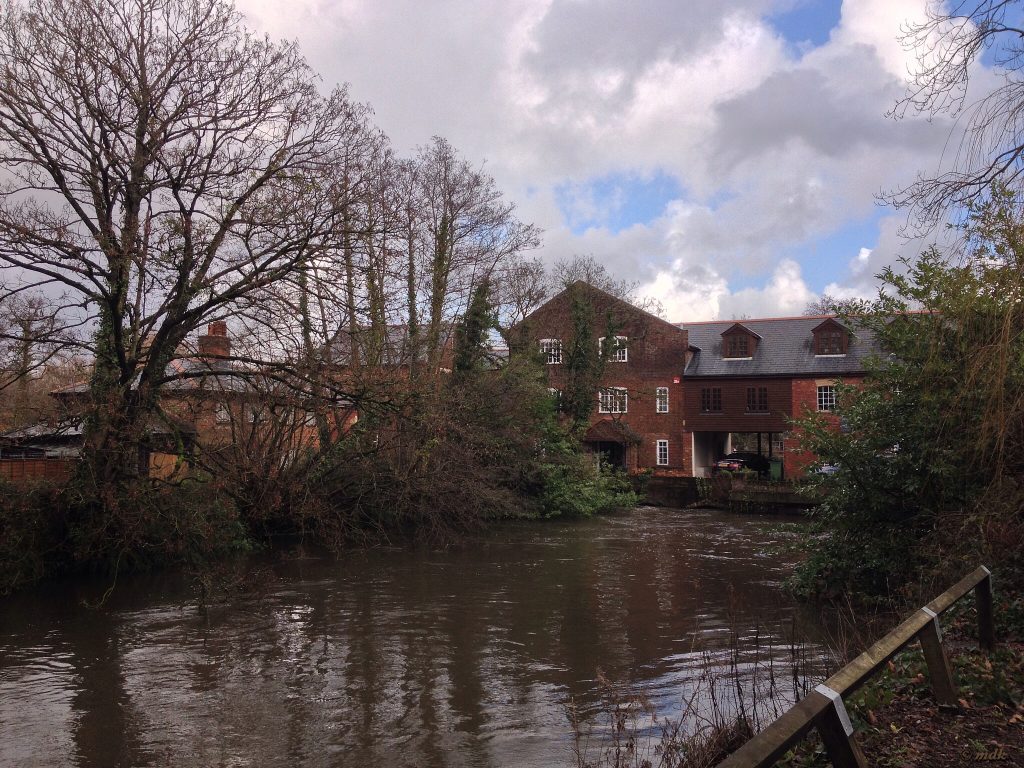 The river was extremely high as I looked down towards the White Swan. Commando tells me it was flooded several times over Christmas and the New Year. Today the doors were open though so I guess they must have cleaned it up. It must be disheartening constantly having floods but I suppose it is the price you pay for living in such a beautiful location. Insurance must be a problem for them. 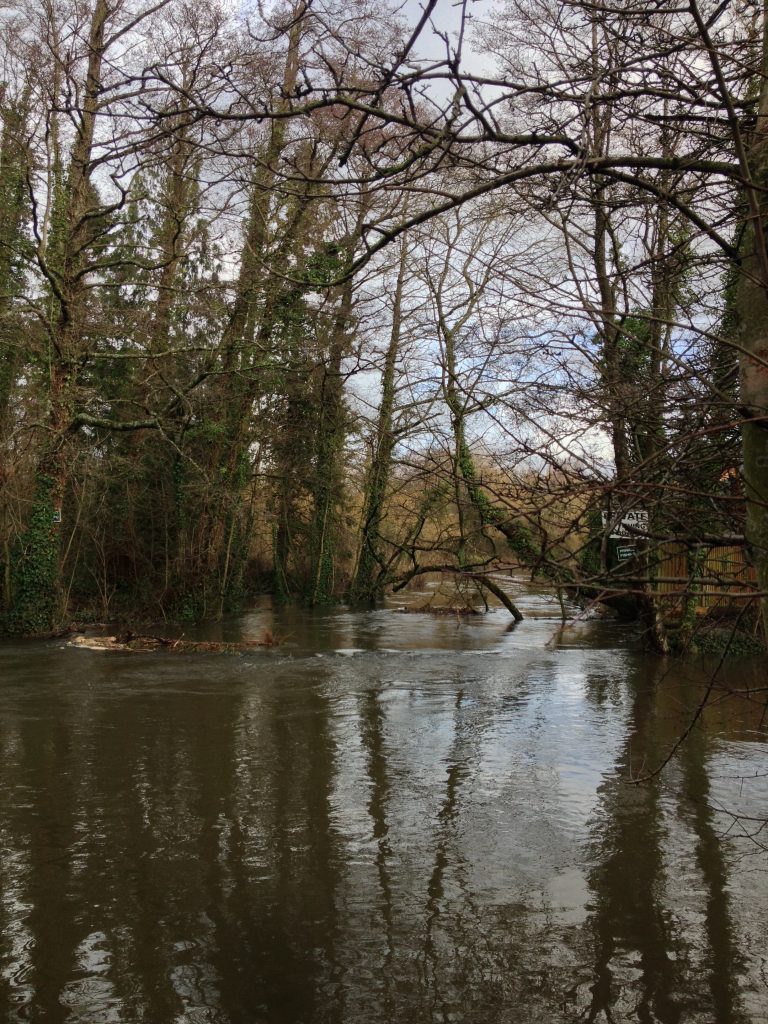 So I crossed back to the other side of the road again and set off towards Mansbridge, the bridge not the place. The woods beside the road were sodden, more like a lake with trees growing in it than a wood. It occurred to me that I might not be able to get along the river path and would have to walk up Gaters Hill after all. There was a large puddle at the bottom of the slope from the road to the bridge but I was able to walk on the muddy grass to avoid it. It was a little slippery but I survived. 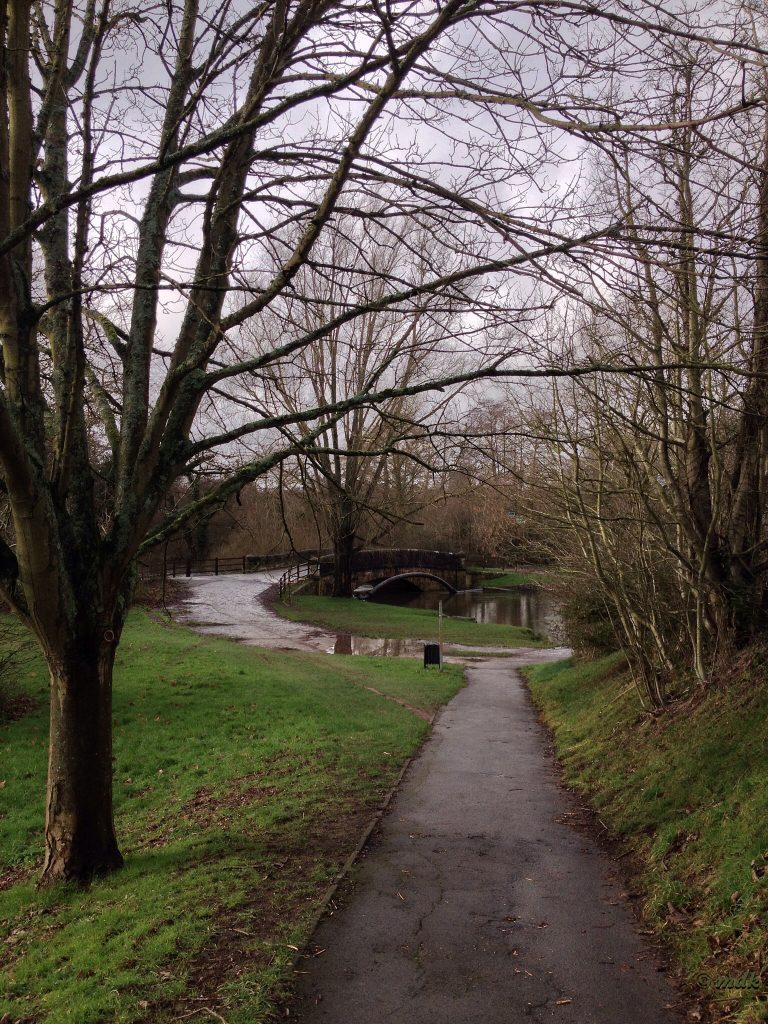 The Itchen was flowing fast and furious under the bridge and, when I looked at it from downstream I noticed it has acquired one of the little black plaques that have sprung up all along the Navigation. I also noticed burst banks and realised there would be some wading through river water. 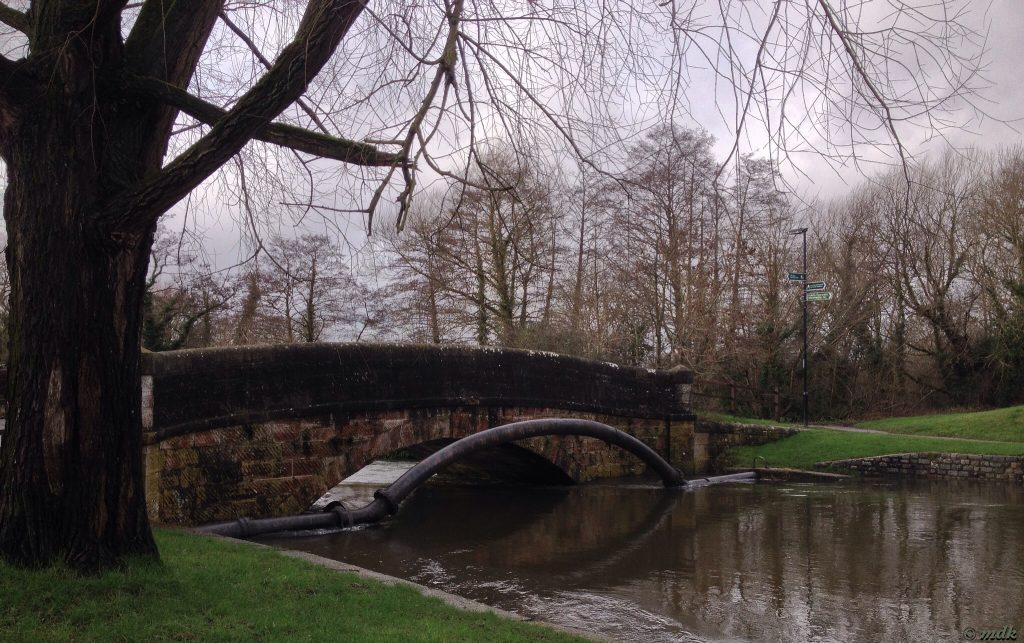 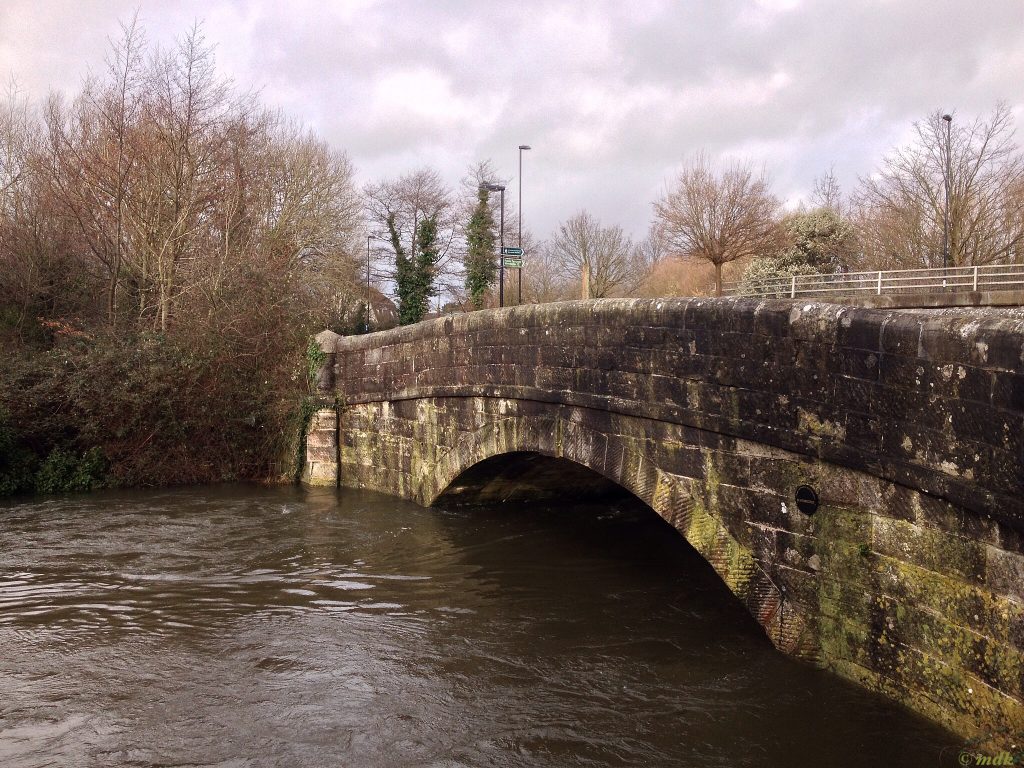 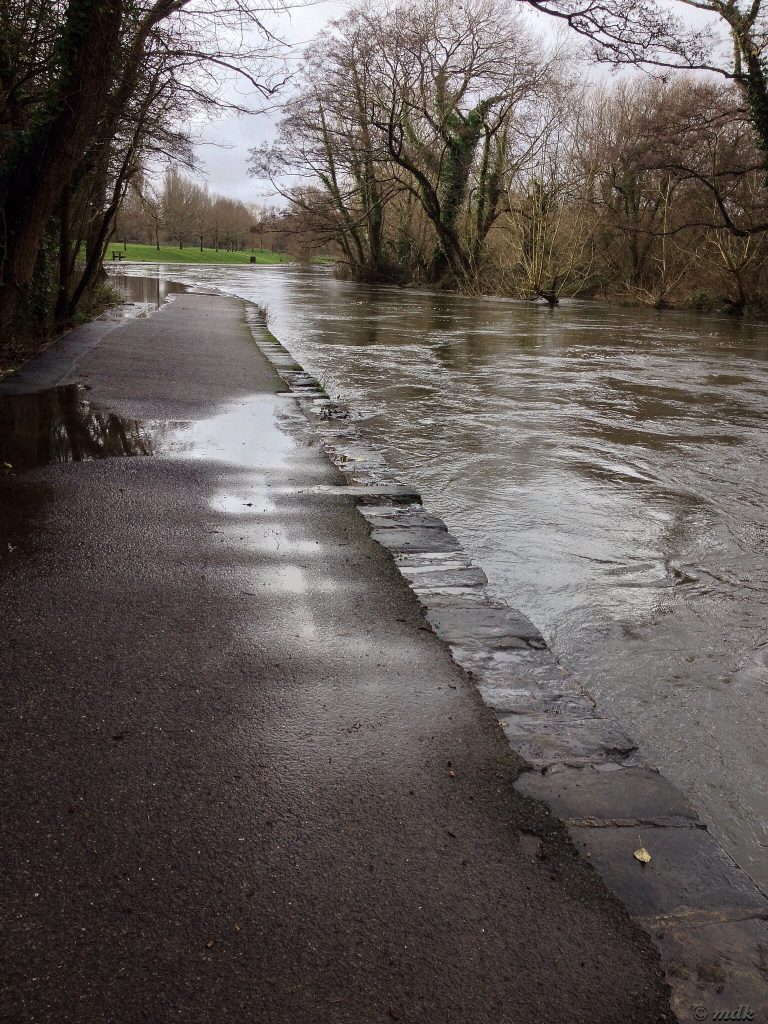 There was but the boots held up. They’ve certainly been worth the money this winter and saved me wet socks countless times. Just round the bend there’s a bench so I made for that and called Arabella. We had a long chat. She’s a little fed up at having nothing to do even though she’s still meant to be working for the next five months or so. After being in the middle of everything for so long it’s hard to be cut out of the loop and sit twiddling thumbs all day. Goodness knows what their plan is but it doesn’t make any sense to me. The last scores were abysmal apparently. I can’t say I’m surprised, there have been so many changes, lots of little cuts, even more since I left and passengers are not happy. 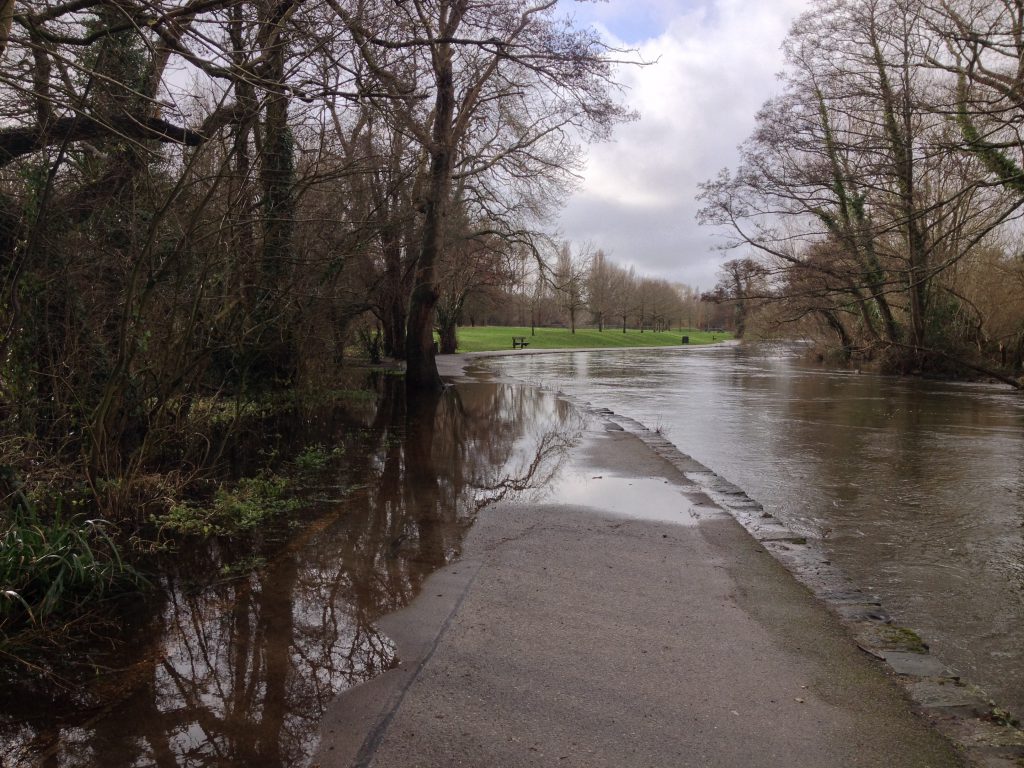 We talked about work for a while and I thanked her for the talking book she sent me to listen to on my walks. It was nice to sit by the river chatting. Typically, while we were talking some horses came over the bridge and I couldn’t take a photo because I was talking on my phone. After a while it began to get darker and I thought rain was on the way so I started walking towards home as we talked. There were more burst banks further along and the woods were completely flooded on the other side of the river. Again I cursed the fact I didn’t have a camera as well as my phone.

By the time I got to Woodmill it was teaming down and I was still talking. This meant I couldn’t take a picture of the beautiful rainbow above the mill. We carried on talking until I got to the final corner of the river. It was good to catch up with her and we always could waffle on for ages. No sooner had I cut off the call than I heard the womp, womp, womp of swan’s wings coming from behind me. That was lucky. I managed to get a photo of a swan flying down river. Not the best photo because it was all in a rush but still. 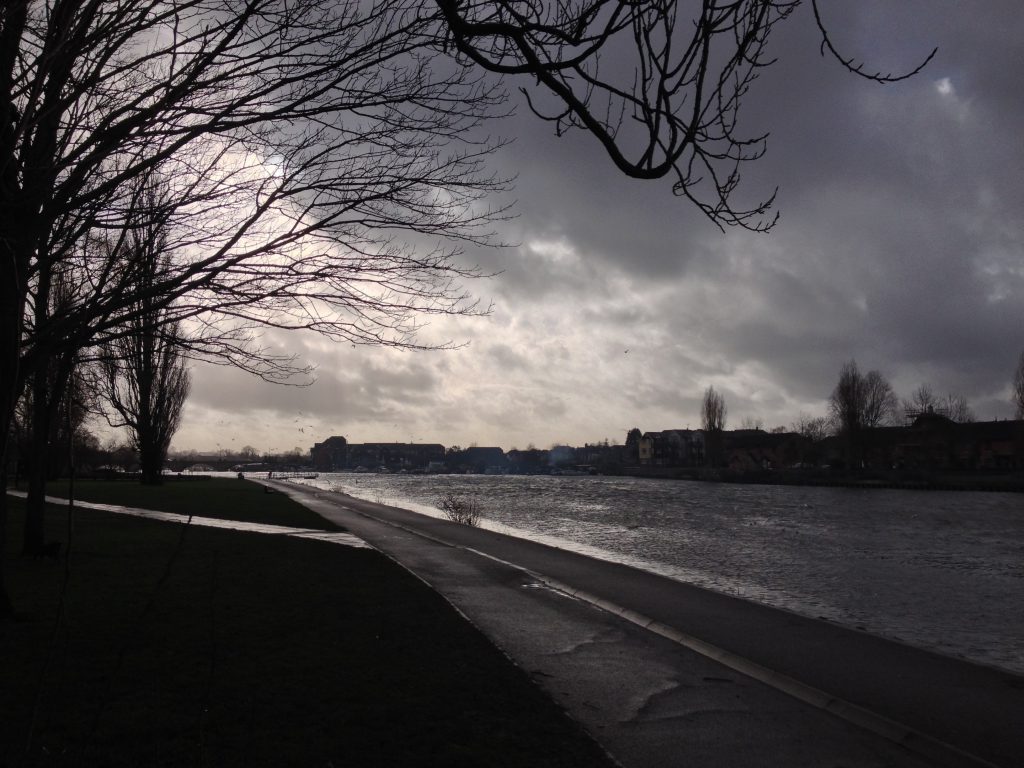 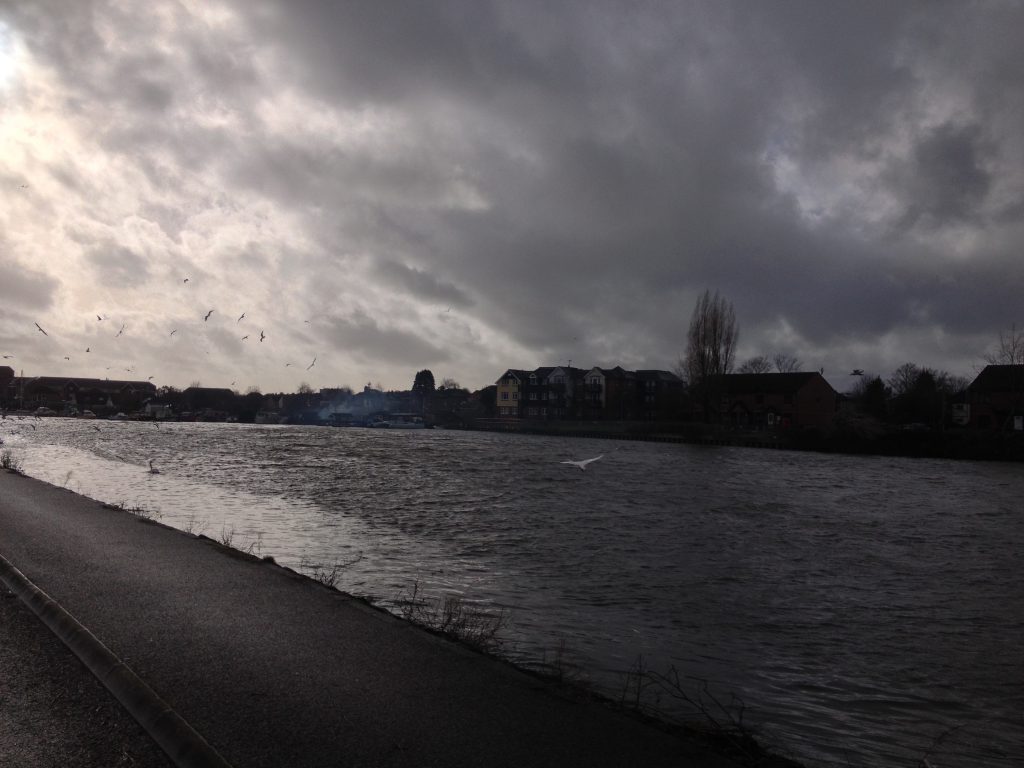 Smoke was billowing from the other side of the river and I thought at first that one of the houseboats was on fire. It turned out to be a bonfire. A mother and child had just thrown bread for the swans too and there was a seagull melee going on. When I tried to take some photos of the swans I ended up with shot after shots of seagulls, they were swirling round my head, so close I could have grabbed one. Good job I don’t have a bird phobia. 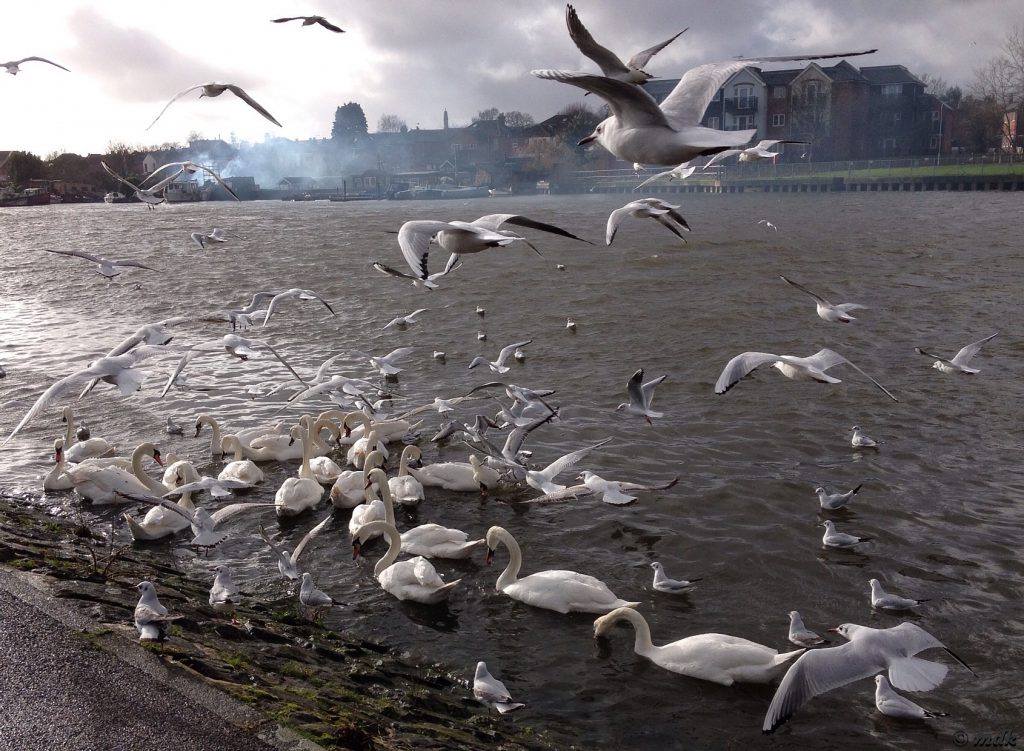 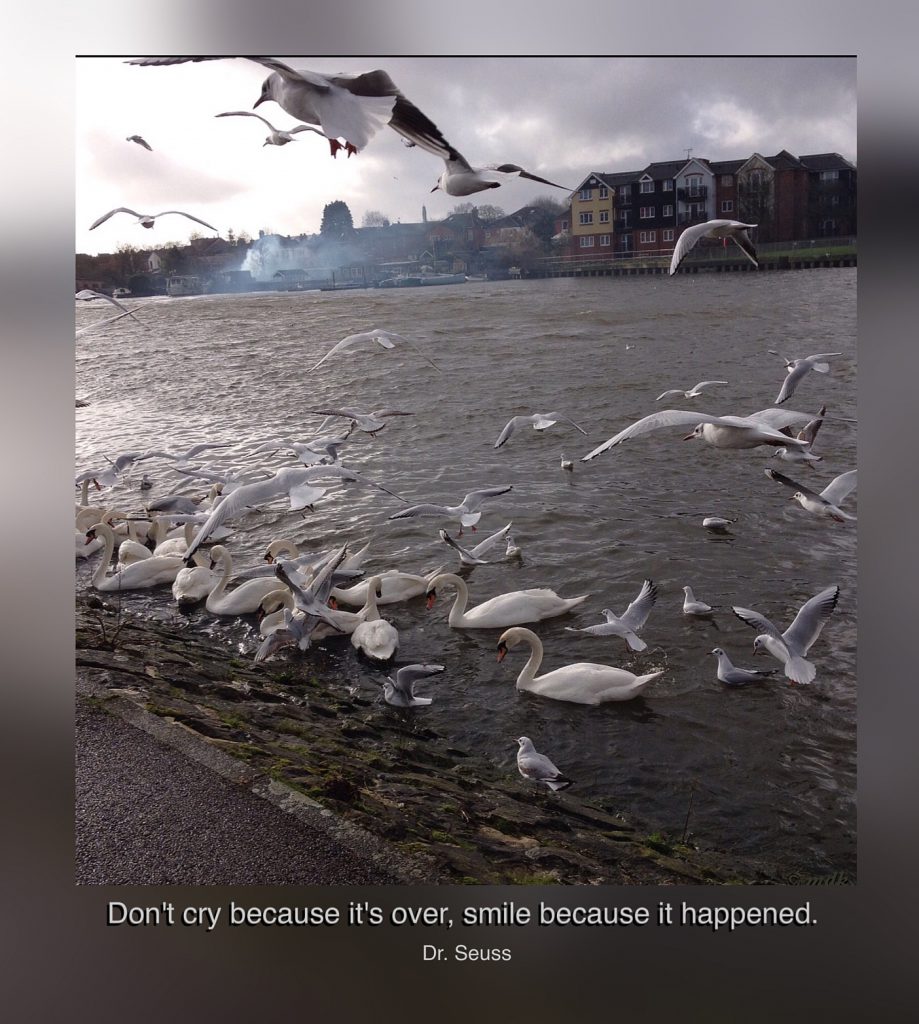 So that was my walk, just over five miles, bringing my total for January to sixty five point five seven miles, well on track for my hundred a month. So far I haven’t mentioned my one thing to make me smile for the day either. This is because I’m trying to decide what it was. The walk made me smile. Talking to Arabella made me smile. The talking book present made me smile. That’s three things and I’ve just spent a couple of hours chatting to Rachel and having my hair cut. It’s been a good day in the smile stakes for sure. 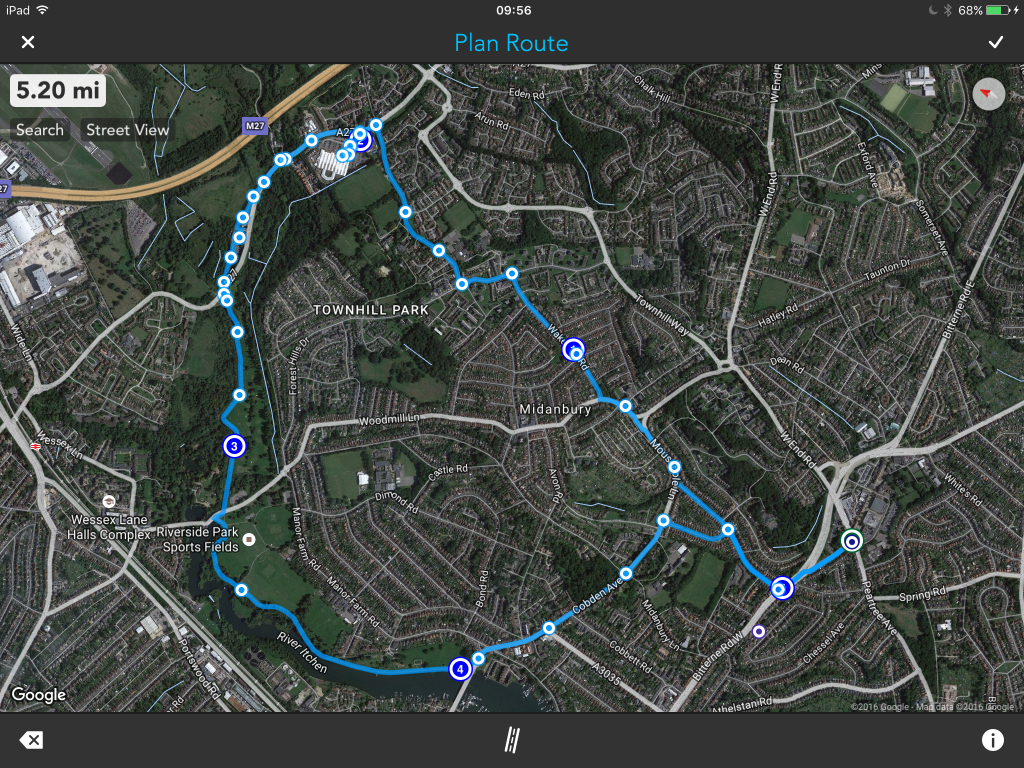