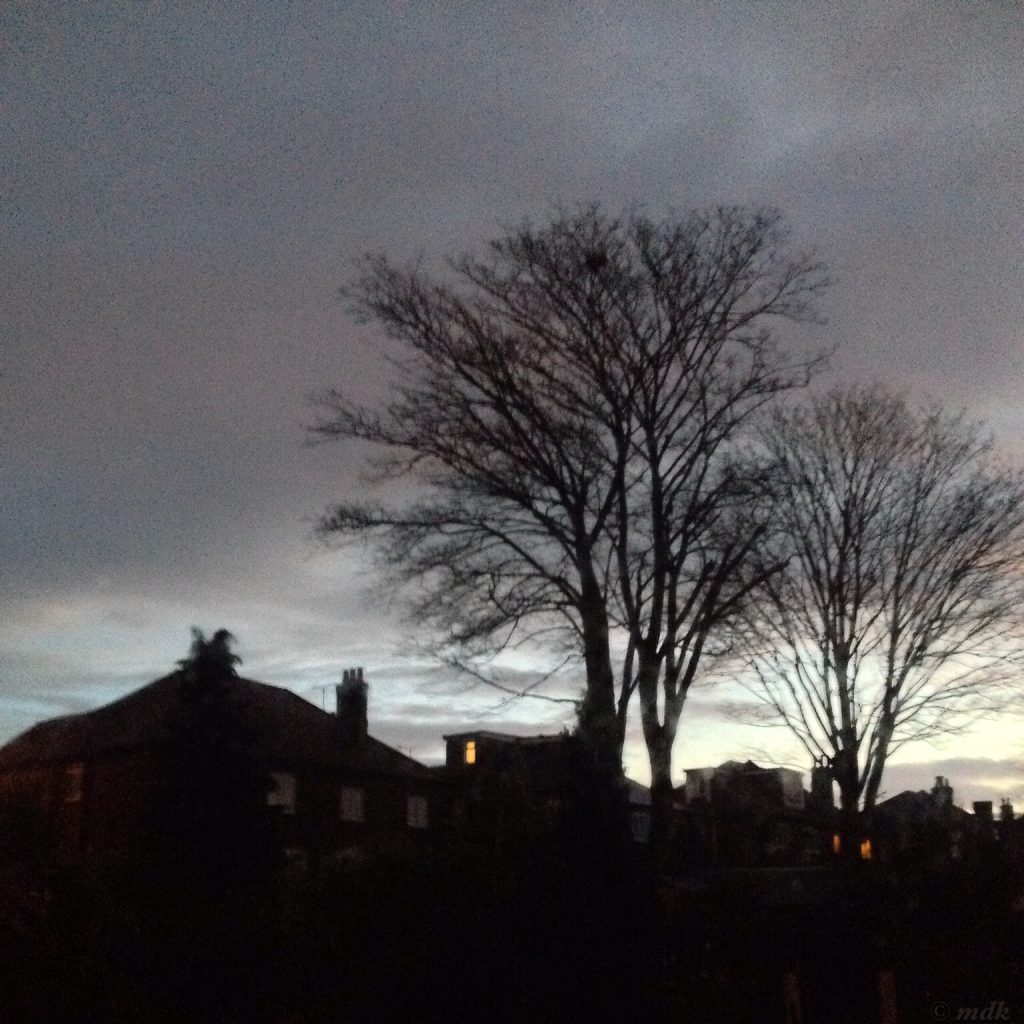 Hard as I might try,  the routine wasn’t really happening. Every morning I started with good intentions of getting this or that done but the days seemed to be running away with me. Some days I spent so long searching for a job I could do and hadn’t already applied for the whole morning was gone leating no time for a walk. It was all very well the job centre saying people have to apply for x number of jobs a week but what wawere you supposed to do when the jobs were just not there? It seemed fairly pointless to be applying for jobs as a brain surgeon or nuclear physicist but that appeared to be what they wanted.

Yesterday my plan for the day began with a nice long walk. I even had a route in mind, going to revisit the green bridge and the blue bridge and then maybe have a coffee in the Swan Centre. As the sun came up it looked like it might be a good walking day. Unfortunately, by the time I’d had breakfast the rain had started to fall. A quick look at the weather forecast told me we were set for showers more or less all day. In the end I just went up the Big Hill and did a little loop of the village with CJ before popping into the butchers and Sainsbury’s. Cakes were made and one was eaten, coffee was consumed, jobs were applied for. Once again I forgot to have lunch. 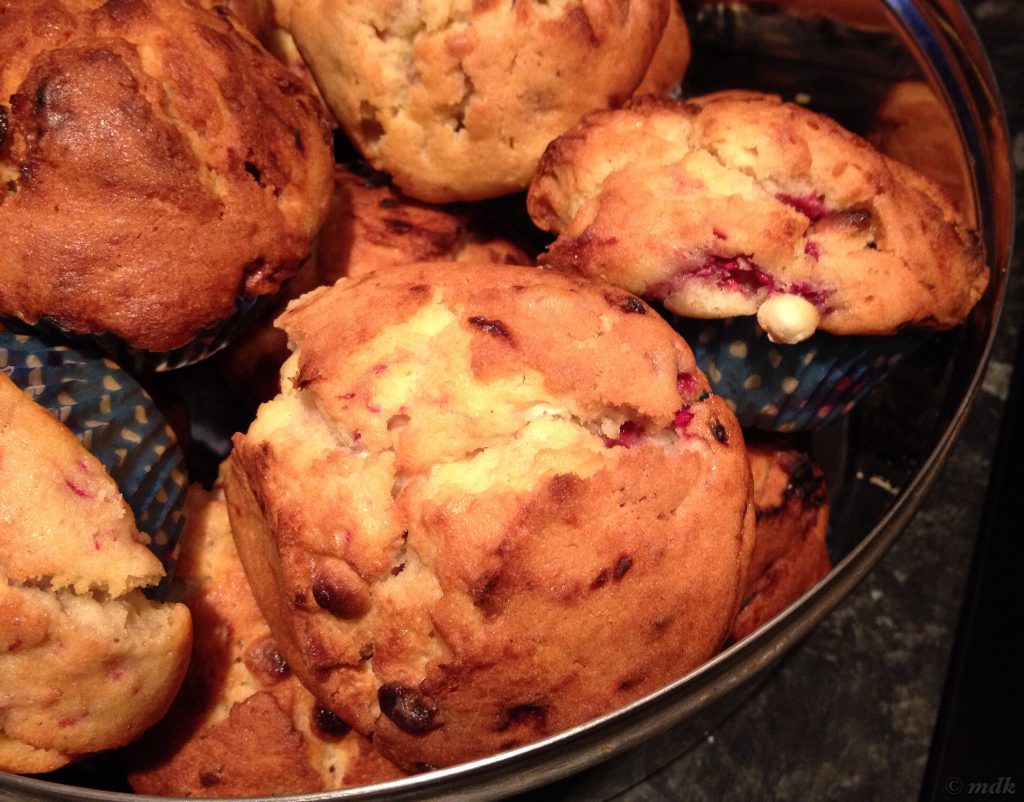 There was a call from a recruitment agency I sent one of the applications to. Once I knew who was calling me I almost got excited but she was just after a little more information because she thought I might be suitable for another of the jobs they have on their books. The job was with a bank and it sounded quite interesting at first. Then she mentioned that they would need to see my exam certificates. Seriously? Of course, after almost forty years, the whereabouts of said certificates is a total mystery. I wouldn’t even know where to start looking.

It seems to me anything I learned back then is pretty much irrelevant against all my actual real life work experience. The very most it could tell anyone is that I’m literate and numerate and that is pretty obvious from the jobs I’ve held down over the years. Then it turned out the job was just a six month contract. The whole episode made me think the bank was another of those institutions where common sense has been replaced by pointless red tape and dogmatic following of policy. Not the sort of place I would want to work at all.

Things to make me smile were a little thin on the ground today so I stopped looking for jobs and gave myself a face pack. Moroccan mud and essential oils spread all over my face and hands and chill out music on my iPod did the trick. If I shut my eyes I could almost imagine I was in a hamam and soon someone would be coming in to give me a nice massage. Now wouldn’t that be nice?

As if it isn’t bad enough having to face the Job Centre degradation once a fortnight, this week I had to go twice. Apparently my visit on Tuesday was not to sign on, it was some kind of assessment. My signing on day, I’m told, is Friday. It does make me wonder why they couldn’t have done both at the same time, especially as the taxpayer is paying ultimately. Seems to me the whole thing is just a big exercise in giving them something to do, thereby keeping them from seeing the Job Centre from the other side of the desk. A bit like the reception area where you queue to get a ticket then pass the ticket to one of two people standing around by the door not more than three feet away.

Still, mine is not to reason why so I set off into the rain first thing this morning, along with CJ who sensed a coffee in it for him. Maybe it was because I wasn’t alone and I was chatting but my feet deviated from my planned route and I found myself walking the old route to work. We actually walked through the car park of the old office and I had to forcibly stop my traitorous feet from taking me through the revolving doors.

The rain and the chatting meant my iPhone stayed firmly in my pocket for almost the whole journey. Pictures of the river with a grey sky backdrop aren’t all that exciting, not unless there are some decent storm clouds anyway. CJ was quite interested in the old warehouse building of American Wharf. 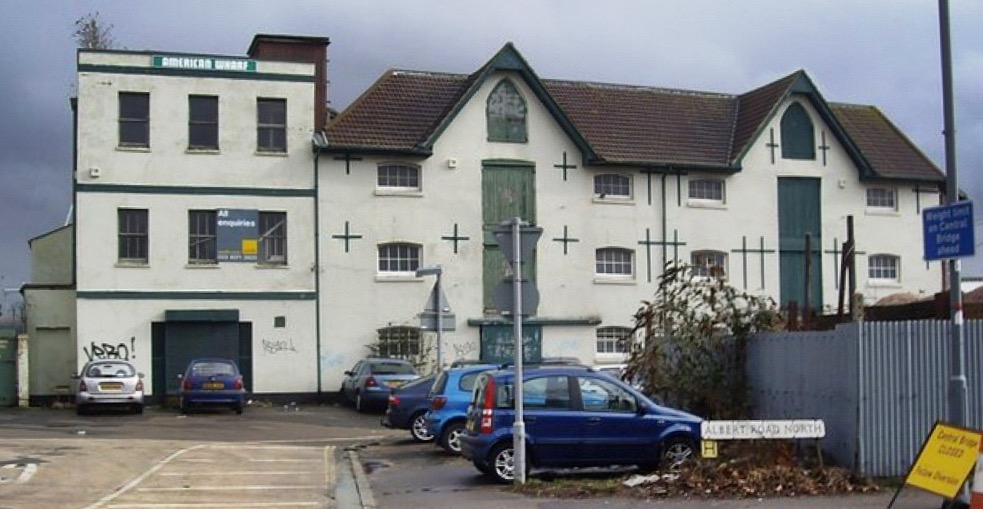 It is actually an interesting and historic building but I suppose, walking past it every day, I hadn’t really paid it much attention before. Under the tiled roof of the oldest section, is a steam mill and bake house dating back to 1781. Built by Aaron Moody and Christopher Potter to make biscuits and other food for the Royal Navy during the American War of Independence, it was extended in the early 1800’s. Presumably this was to increase production during the Napoleonic War.

The strange dark green crosses on the pale green walls were added in 1869, replacing the original timber posts. Originally called Chapel Steam Mill, it had ten ovens producing bread sixteen times every day weighing eight stone in total! There were only ever three steam mills built in England and this is the only one still surviving. Sadly it has now been turned into offices so it isn’t possible to get a look inside. Now where have I heard that before?

Once we’d got the signing on over with we went to Costa’s for a coffee. Although I am getting more used to my Job Centre visits I still find them very stressful and upsetting so, although coffee is an unnecessary expense, it does give me something to look forward to. As I said to CJ, “it’s money I’ve saved in bus fares so we have to walk home.” I’m not sure he was impressed, especially as it was still raining. 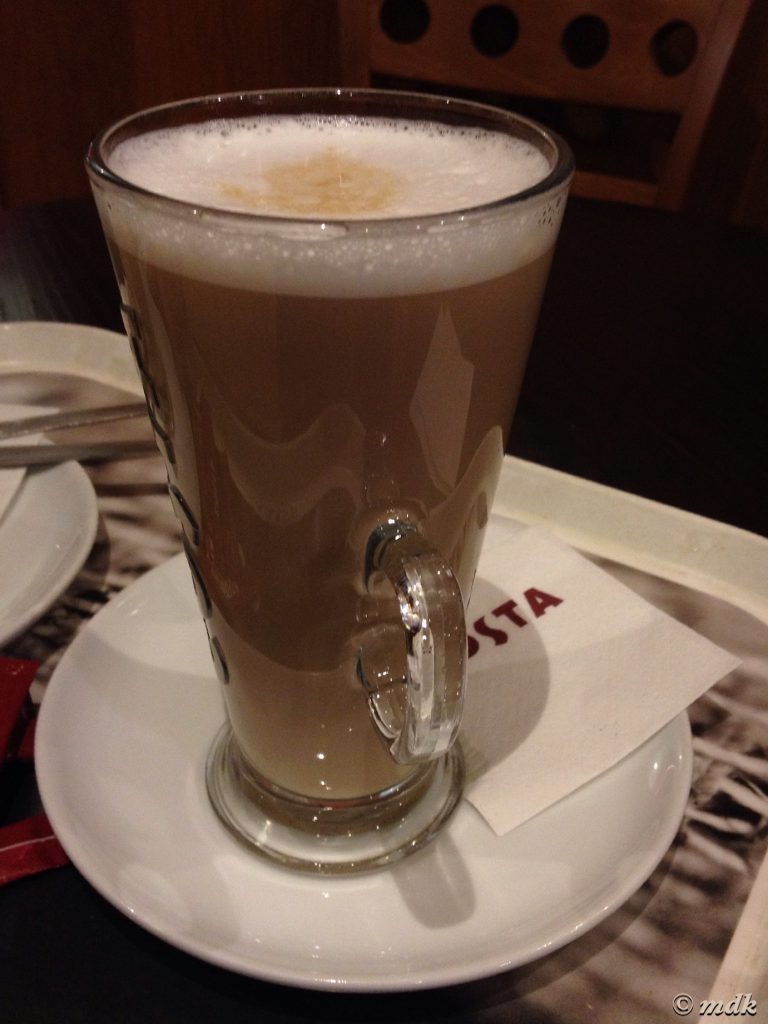 We walked back over the New Bridge for a little variety. Up on the high bridge with cold rain blowing into our faces I did wonder if it was such a brilliant idea but we made it across. As we approached the far side I even stopped to show CJ where the Spitfire factory used to be. Of course there’s nothing to see there any more but he seemed slightly impressed. In fact, when I suggested we took a little detour to walk past it he was all too happy to agree.

Of course there is no factory there now just a plaque, but by the time I remembered about that we’d already walked past it. Maybe next time we come this way I’ll take a photo. A little further along the road there’s a small jetty and, as we passed, I happened to glance over the wall. When I spotted a crop of mushrooms growing amongst the shingle and seaweed I was quite surprised so we went inside so I could have a closer look. Crouching down to take photos I thought I’d hit the fungi jackpot with some red jelly mould. 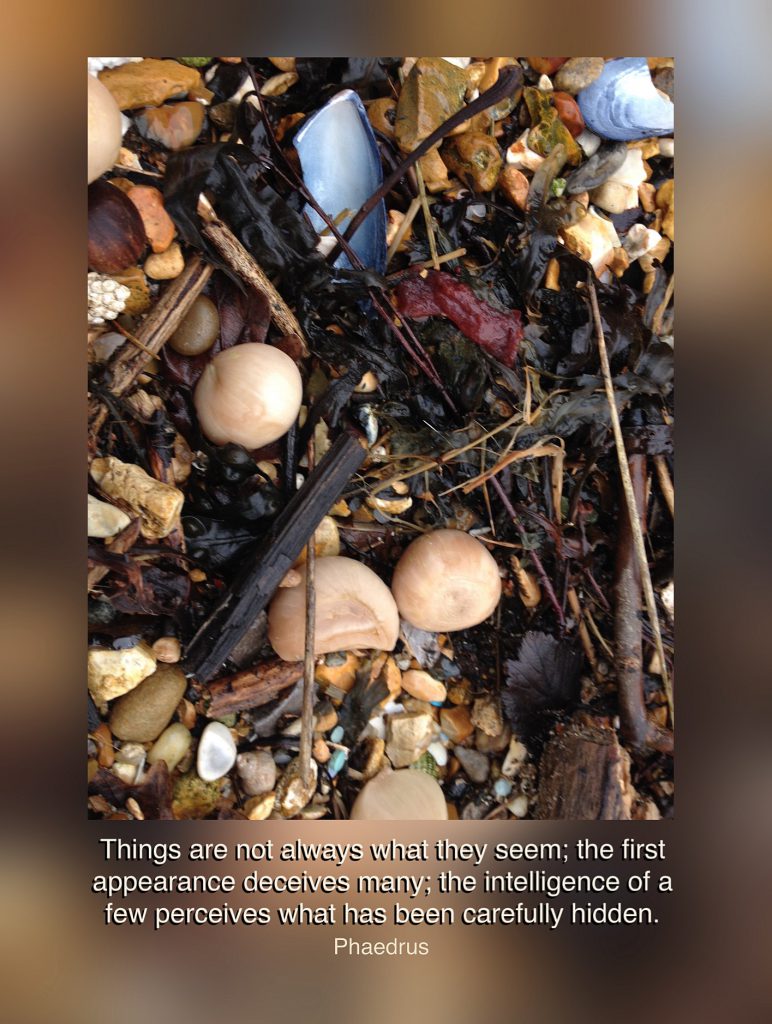 Something didn’t seem right though. I’ve never heard of fungi growing on the shore amongst the shingle. Looking closer still I started to laugh. If CJ didn’t think I was mad before he certainly did then. When I explained though he started laughing too. My mushrooms were actually pickled onions and my jelly mould was, as far as we could tell, jam of some kind. Quite how or why either got there is a mystery.

There were swans on the end of the jetty and CJ wanted to walk down for a closer look so we did. Not wanting to scare them off we took it very slowly, looking at the ground and trying to look like we weren’t interested in them at all. We stopped a couple of times and I took pictures of some bladder wrack and a composition of swan feather, shells and other debris just to throw them off the scent. 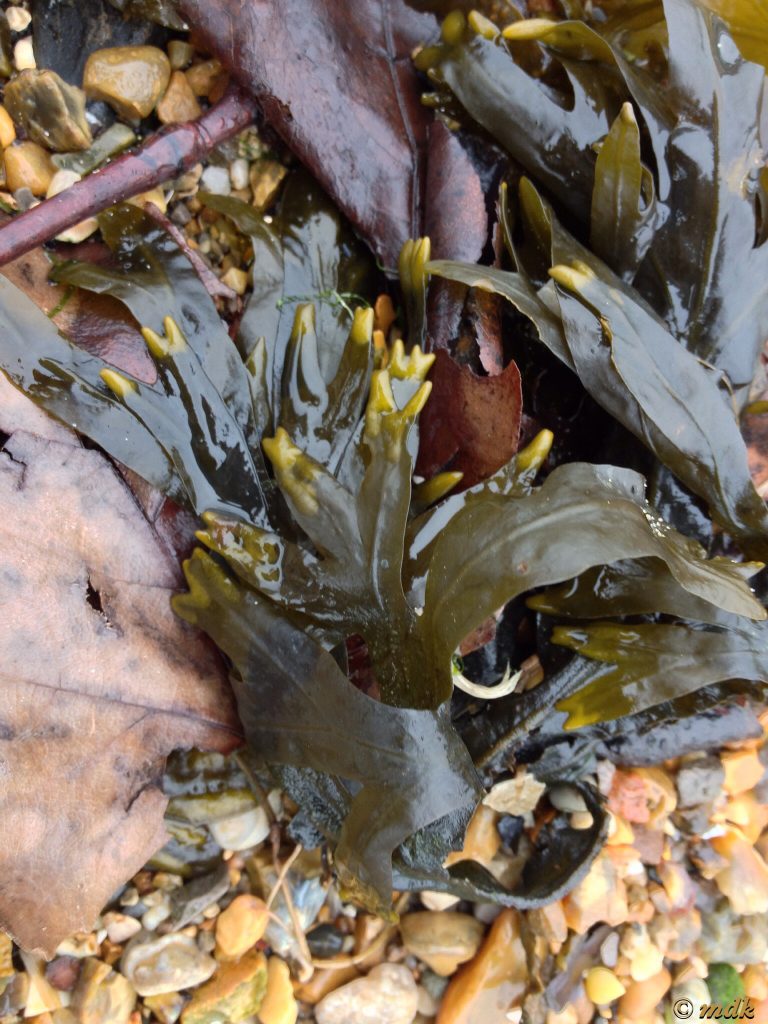 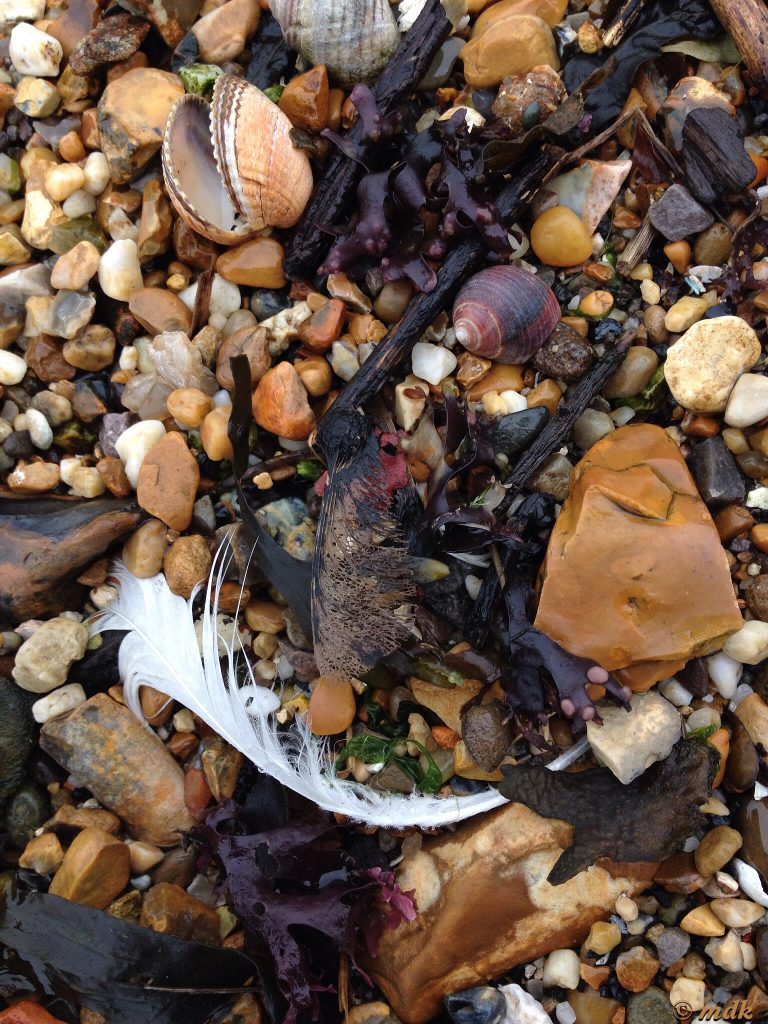 The closer we got the more suspicious the swans became. Personally I didn’t like the way they were looking at us and, given how aggressive they can be when cornered, I was all for stopping when one stood up. CJ, being braver, wanted to get closer so, inch by inch, we did. When both swans got up I thought we might be in trouble, there was a lot of tail waggling and they looked pretty cross. Luckily they turned their backs on us instead of attacking and waddled of quite huffily into the water. I was quite sorry to have spoiled their peaceful rest on the shore. 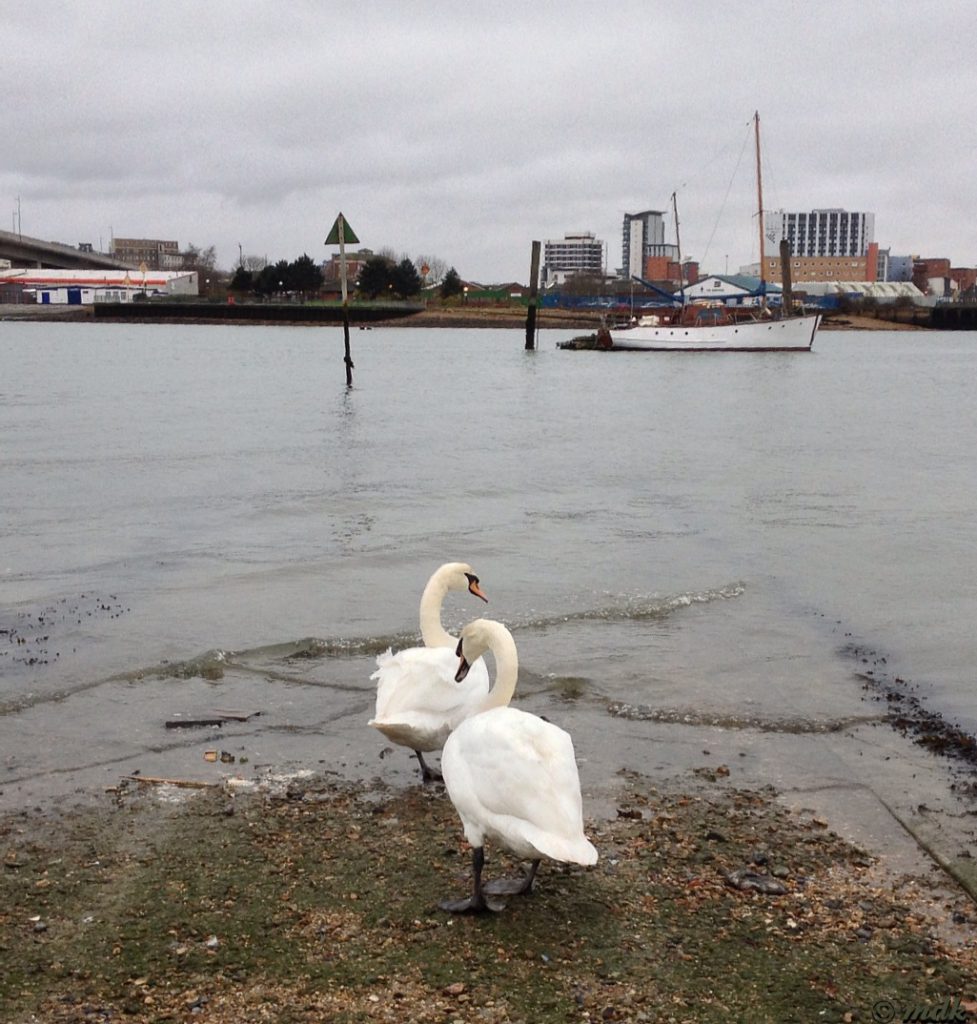 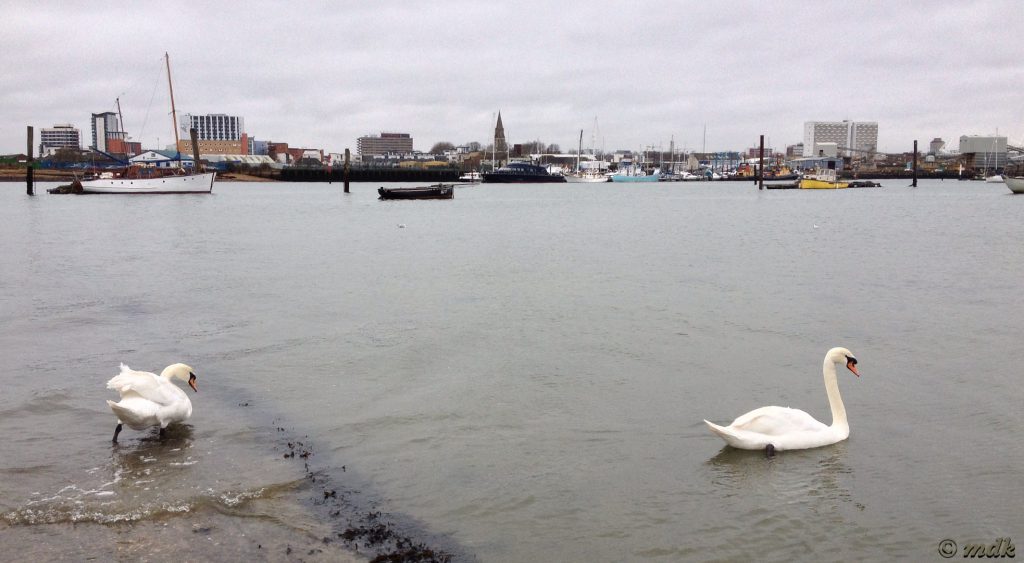 From the jetty it was a short walk under the railway bridge to the green. CJ hasn’t seen it since just after the fire and was quite surprised to see how the grass and weeds have grown and how little evidence is left of the blackened, scorched ground. It probably wasn’t the best decision to walk across the green. The paths were very muddy and we had to pick our way across the least squelchy bits. A small lake has appeared due to all the rain we’ve had. CJ swore he could see a duck on it but I’m pretty sure he was pulling my leg. 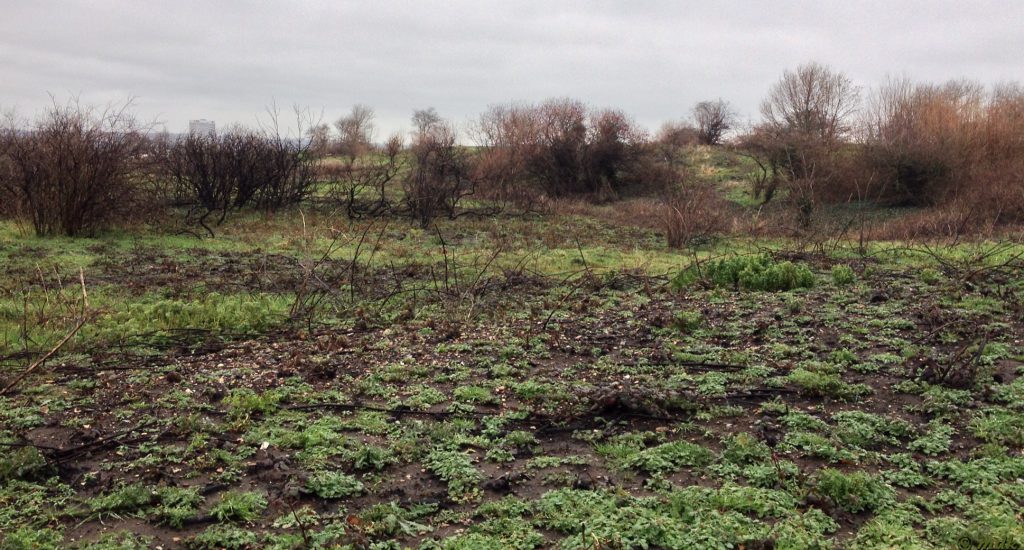 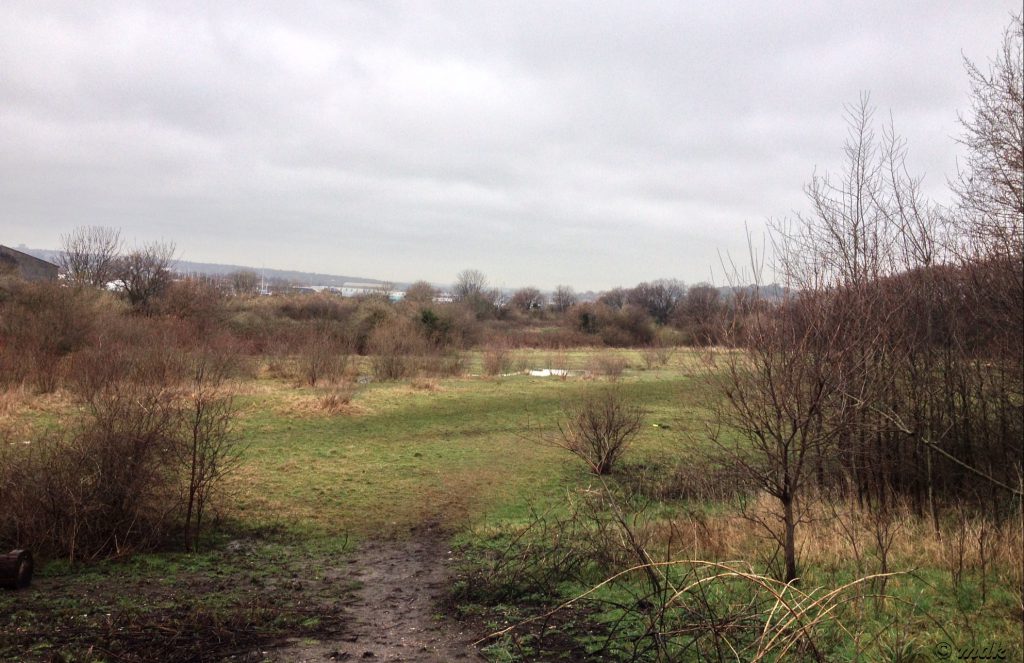 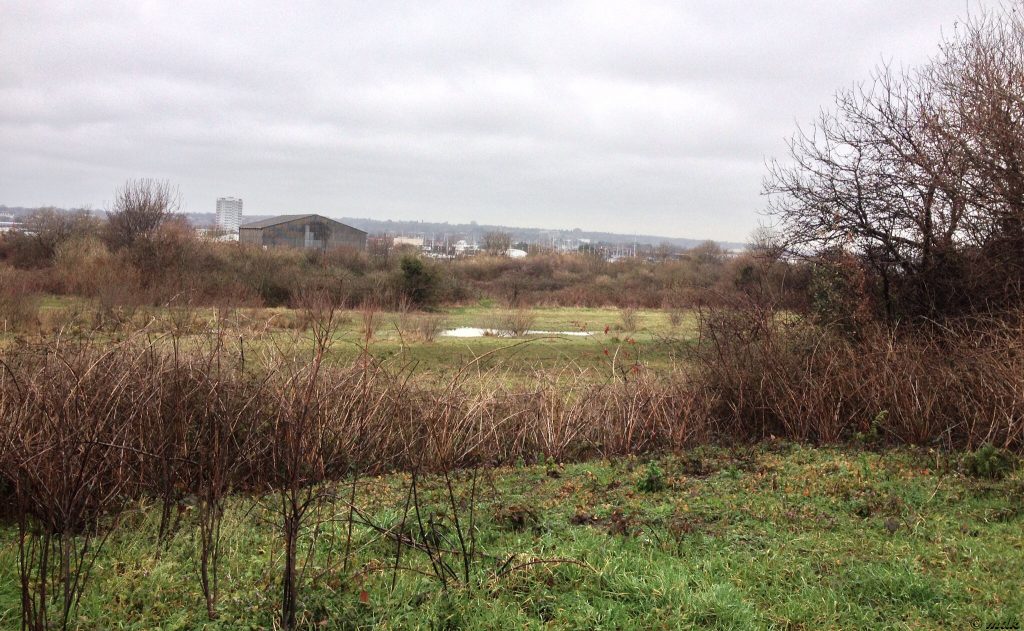 My traitorous feet led us astray again once we got back onto the path. Instead of sticking to the Tarmac, they led us down through the woodland walk. By the time I realised it was too late. In the spring I remember this trail being so muddy it was almost impassable and I thought we were in for a difficult walk once we got over the hill. Strangely, where the rest of the city seems to be sinking under all the rain, this little path was relatively dry. The mud was there but nothing we couldn’t get round easily. 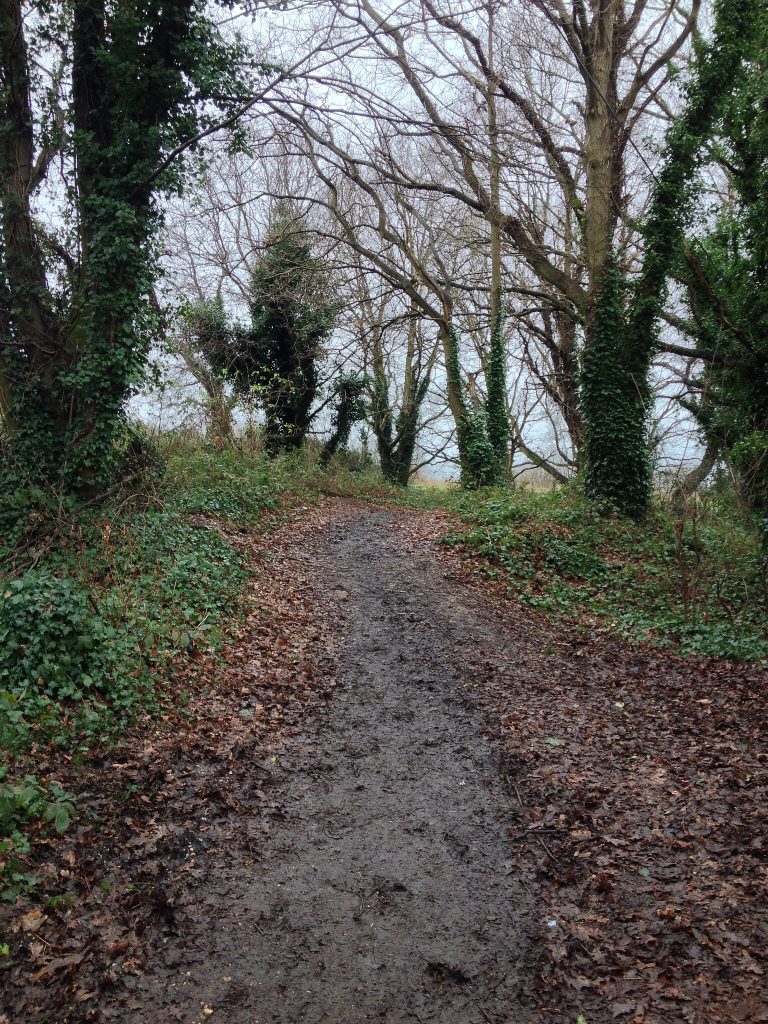 All in all it was a pleasant walk and, with all the detours, it added six and a half miles to my total for the month. Going to the Job Centre is never going to be fun and I hope I don’t have to do it too much longer but I’ll be making the most of the walking.

Finally, the one thing to make me smile today was Panda. She had a job interview this morning while I was signing on. We were half way across the green when my phone buzzed with a text from her. She got the job! Now if that isn’t good news, I don’t know what is.