Parkrun is becoming a bit of a regular Saturday morning event for me these days, although, obviously, I don’t run. Sometimes I help out, doing things like marshalling, sometimes I just watch or have a wander on the Common, other times I walk it. What I’ve never, ever been asked to do before though, is blow up balloons. This was a very special parkrun though.

Commando had his name on the volunteer rosta as tail runner. He’s still not allowed to run yet but, despite the name, the tail runner very rarely has to do any running. Their job is to come last and make sure everyone that started finishes. Usually this is done at a slow walking pace but, just in case this should be the one parkrun with nothing but runners, I said I’d walk it too. That way I could be the last  person back with the tail runner behind me.

Due to a fair on the Common this weekend the start was near the Cowherds rather than the Hawthorn Centre so we parked up just off The Avenue. This meant a leisurely stroll across the Common, through the Beyond Graffiti tunnel. Some beautiful new floral graffiti has sprung up since my last visit. It seemed to have a real sixties summer of love vibe to me and I stopped for a few photos. 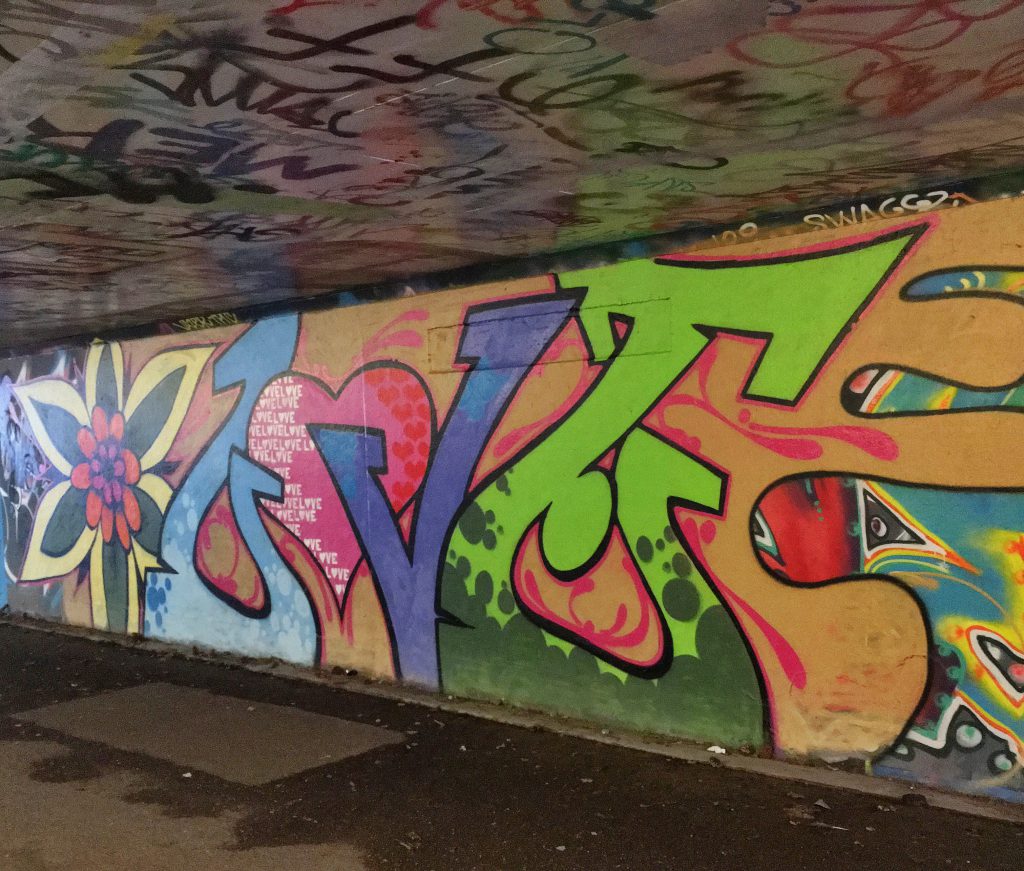 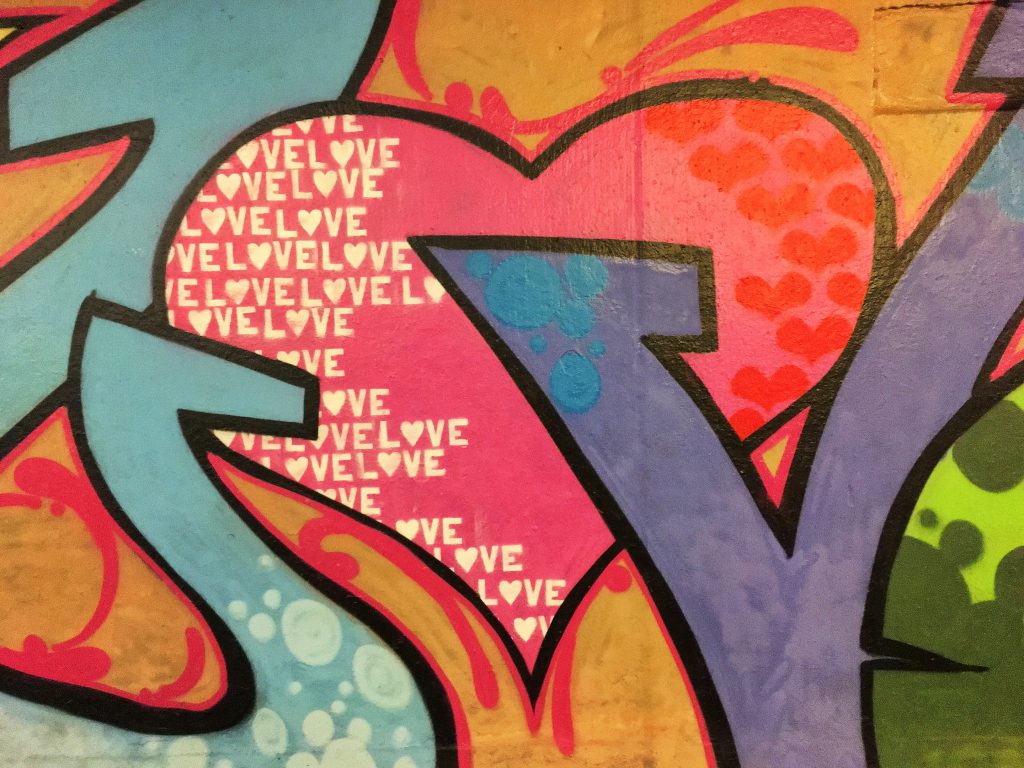 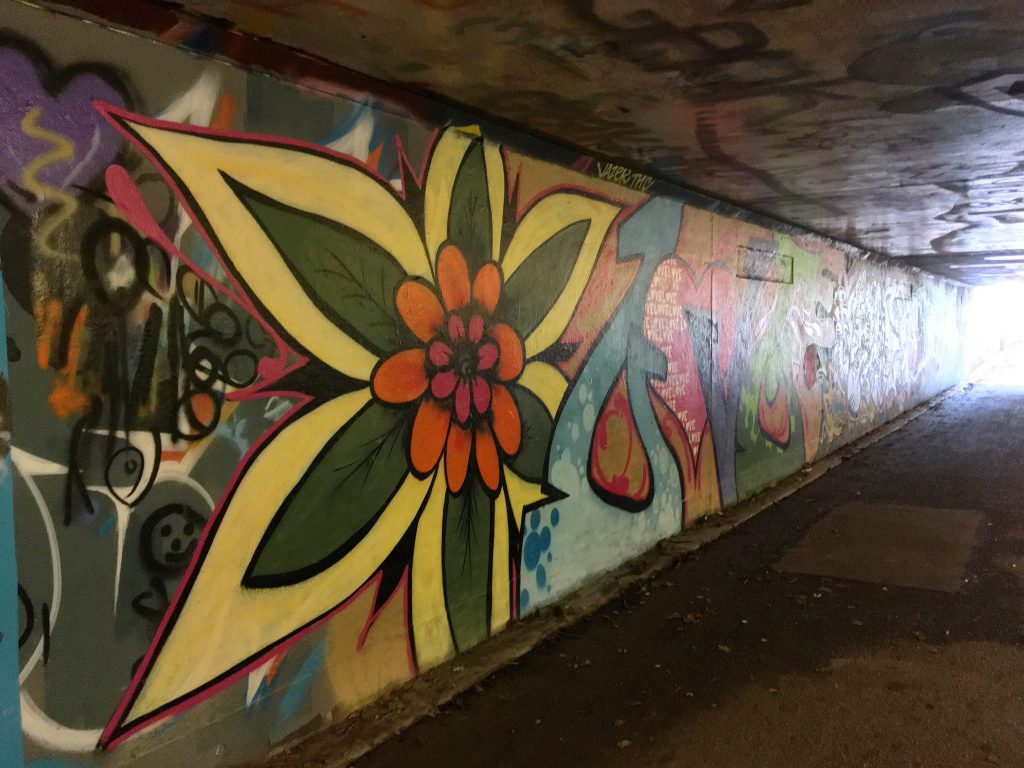 Passing the boating lake I could see the swans and their cygnets up on the path snoozing and preening. The ground was littered with enough swan feathers to fill a duvet. Commando walked on ahead while I snuck up to them as close as I could to get some photos. Sadly, I didn’t have the fancy camera with me but the iPhone did an admirable job in the circumstances. 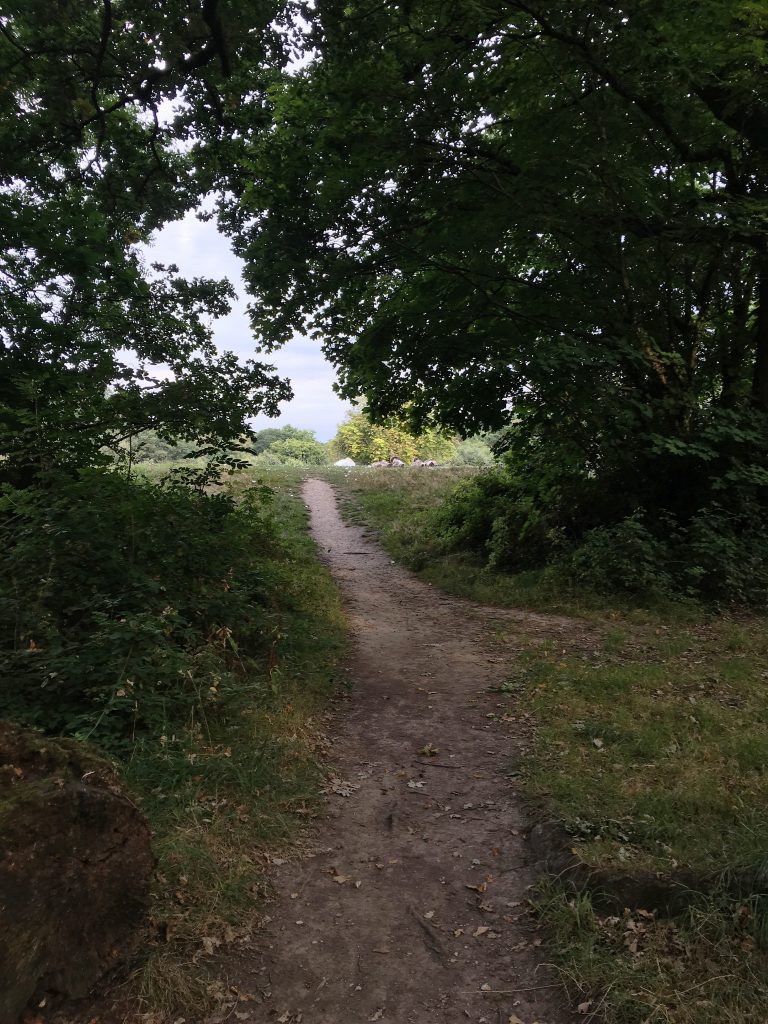 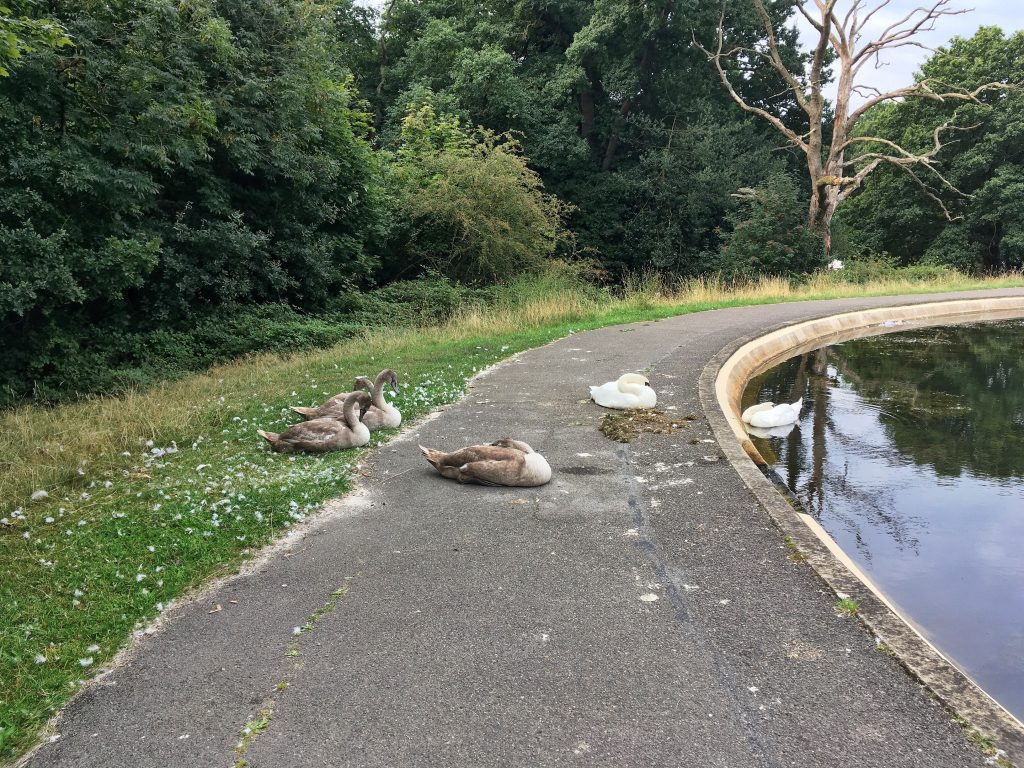 By the time I left the swans Commando was already lost in the throng of people gathered round the start setting things up. As I got closer, I thought I saw people with balloons. Very strange. Perhaps it was someone’s birthday or some other celebration. Believe it or not, people often run dressed in weird and wonderful costumes to celebrate milestone parkruns, birthdays, or as brides and grooms just before they get married, not real wedding dresses you understand, that would be  a bit tough to run in. 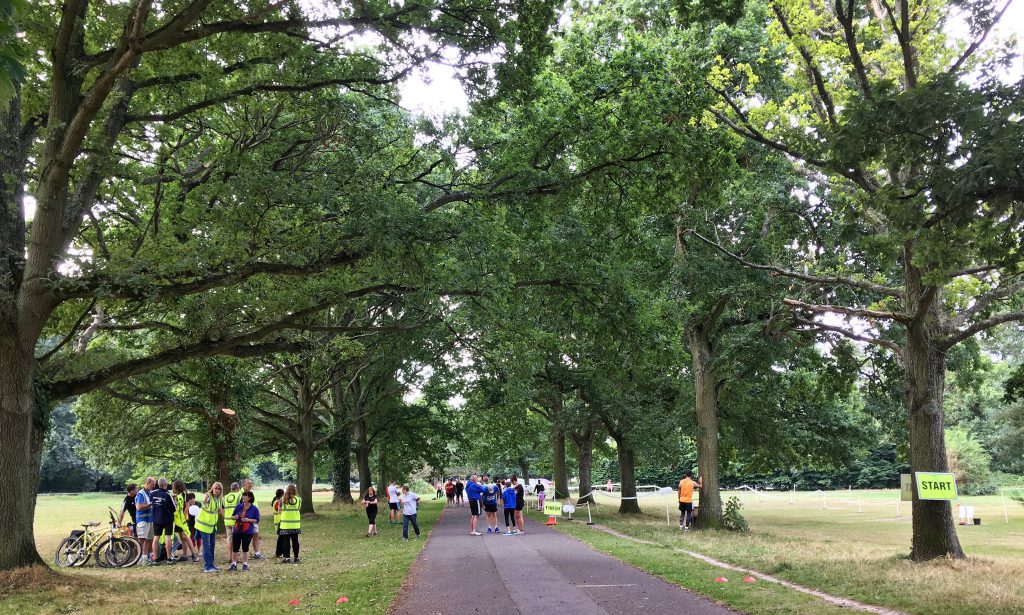 As soon as I reached the start line someone pused a bunch of deflated balloons into my hands and asked me to blow them up. Mine is not to reason why so I began blowing. As I did Commando explained. Today was a national event called I Am Team GB, aimed at getting people off the couch and out being active in the wake of the British success at the Olympic Games. The independent television channels were even shutting down for one hour this morning in the hope that, without TV, people would go outside and do something productive. Southampton parkrun was taking part, hence the balloons, along with red white and blue bunting and lots of I Am Team GB signs. 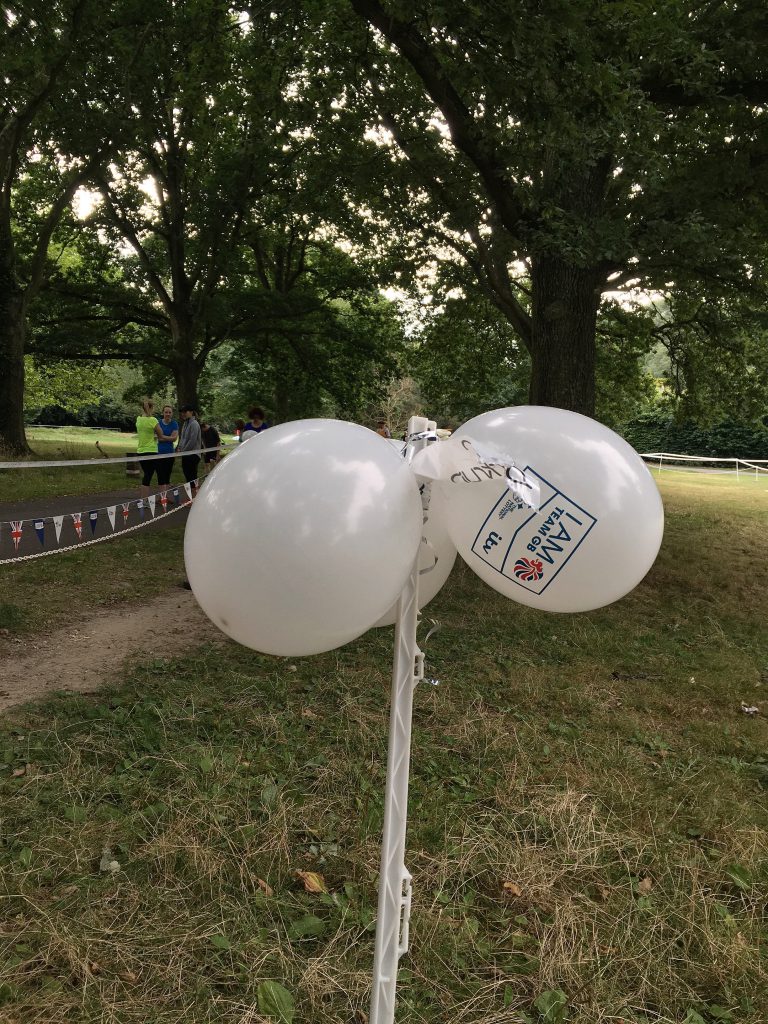 The balloons all ended up tied along the finish funnel, along with the bunting. Never has the start finish line looked so festive. Special I Am Team GB t-shirts were handed out to the volunteers and, once we’d stopped messing about with the signs, they were pinned to a tree near the start line. 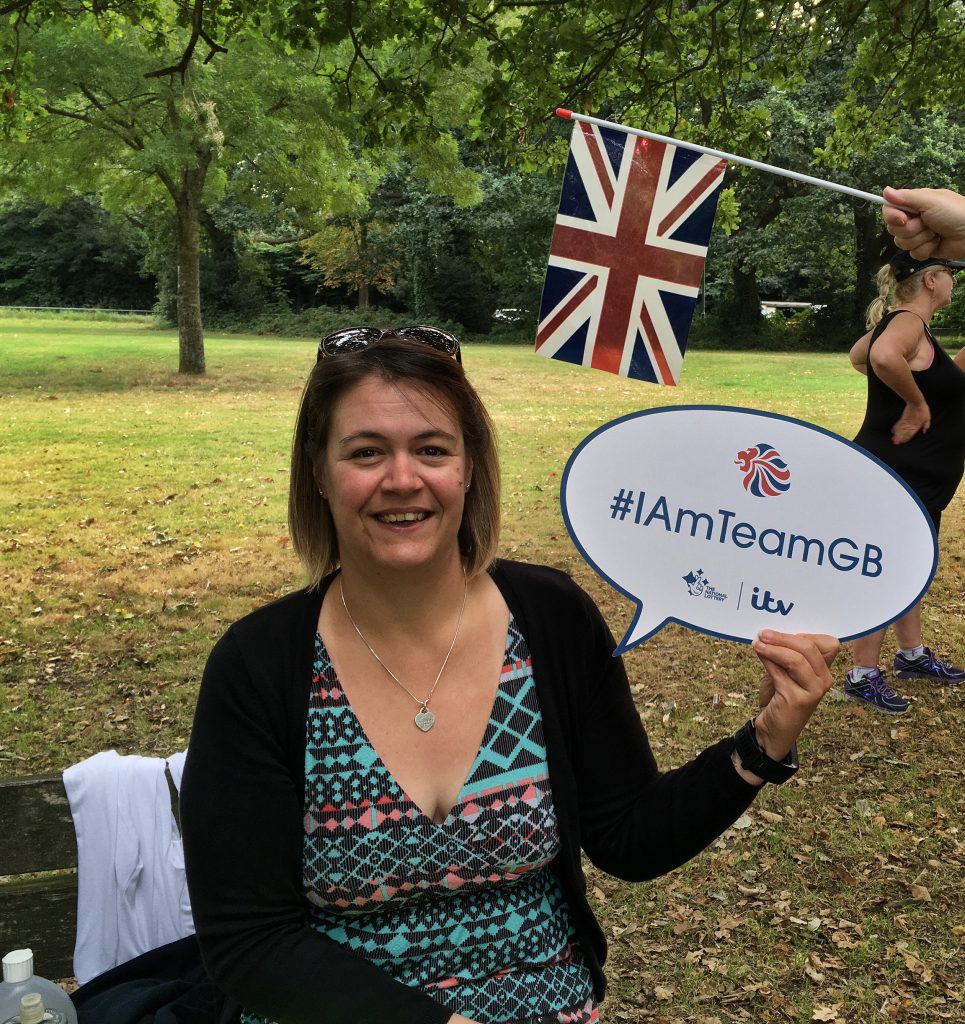 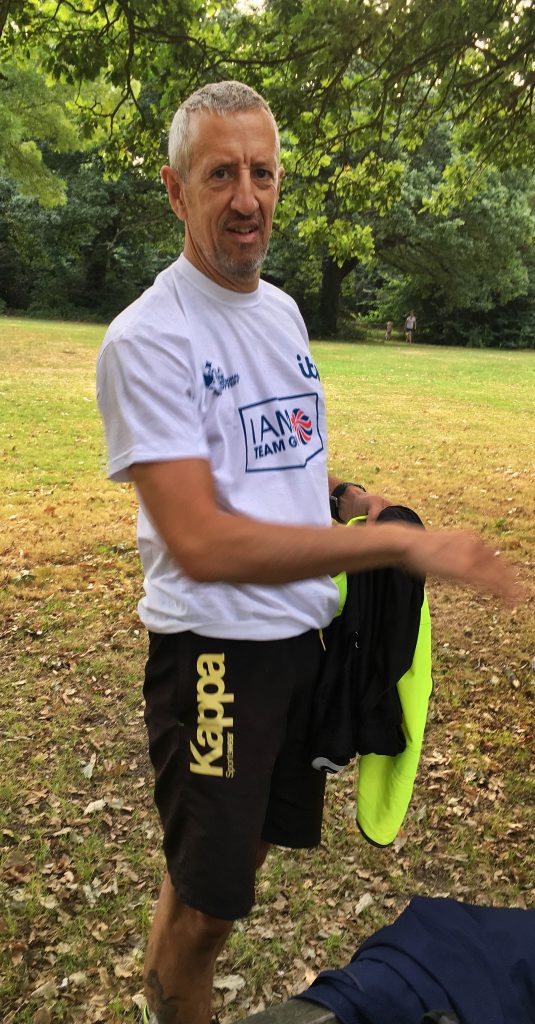 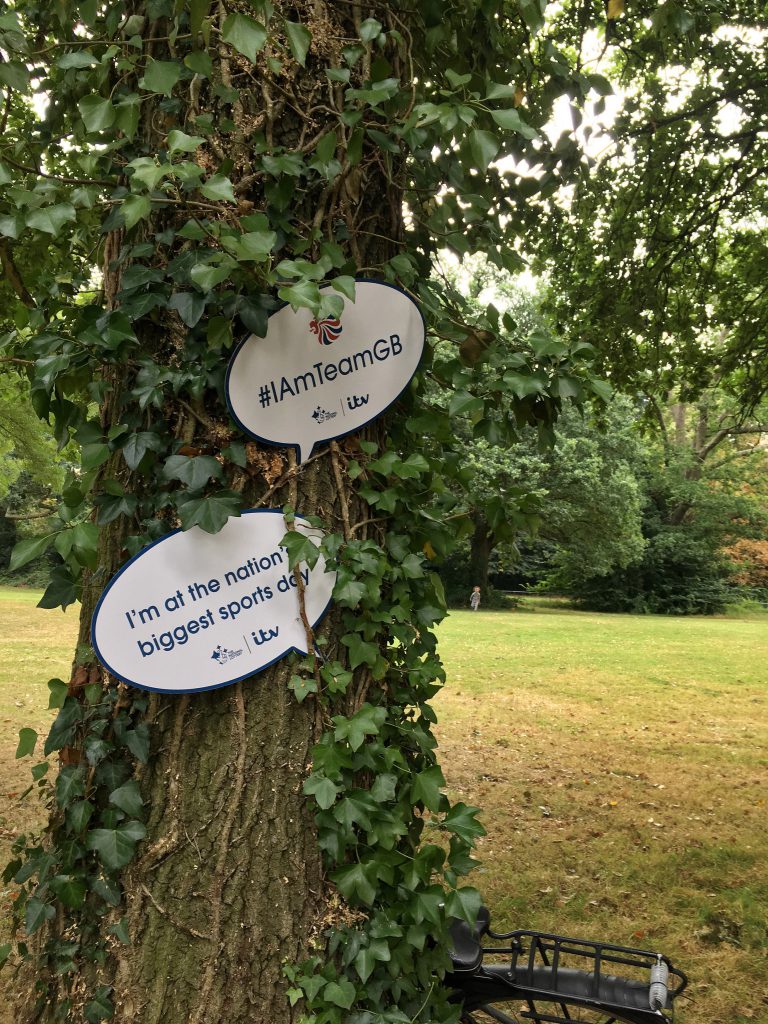 The first timers briefing seemed quite a lot bigger than normal so perhaps the idea of I Am Team GB really did get people out of bed and into the park. All in all there were six hundred and ninety two runners including sixty three new park-runners. Not record breaking but not a bad crowd, especially as all the university students are on holiday at the moment and many of them run when they’re in the city. 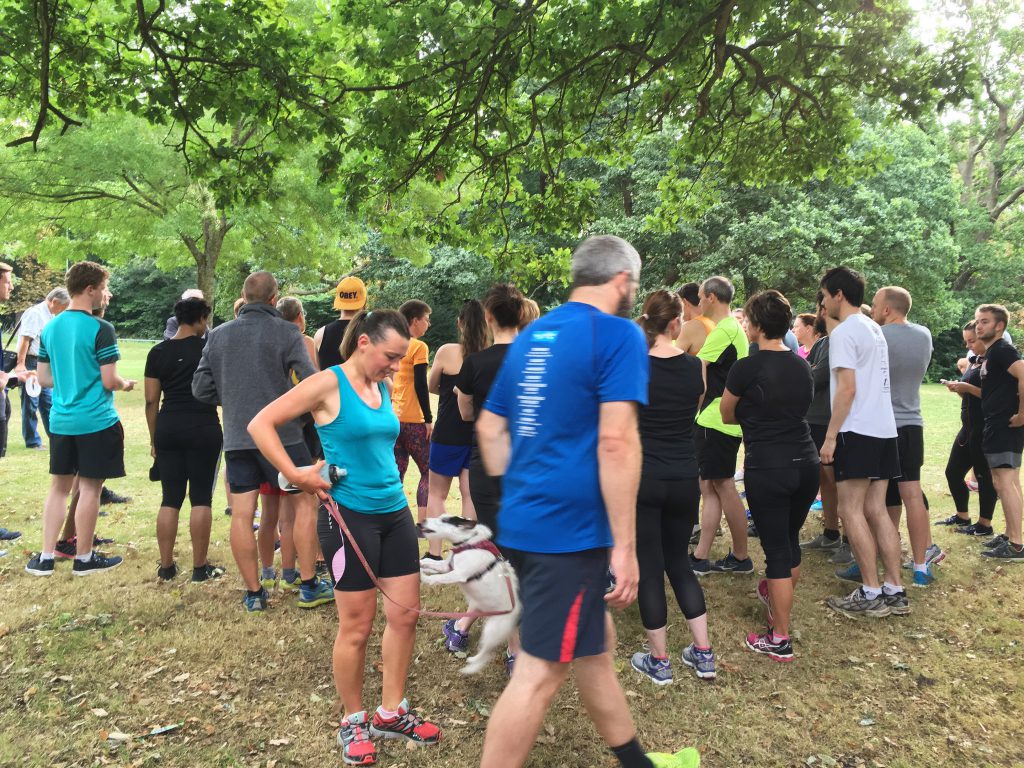 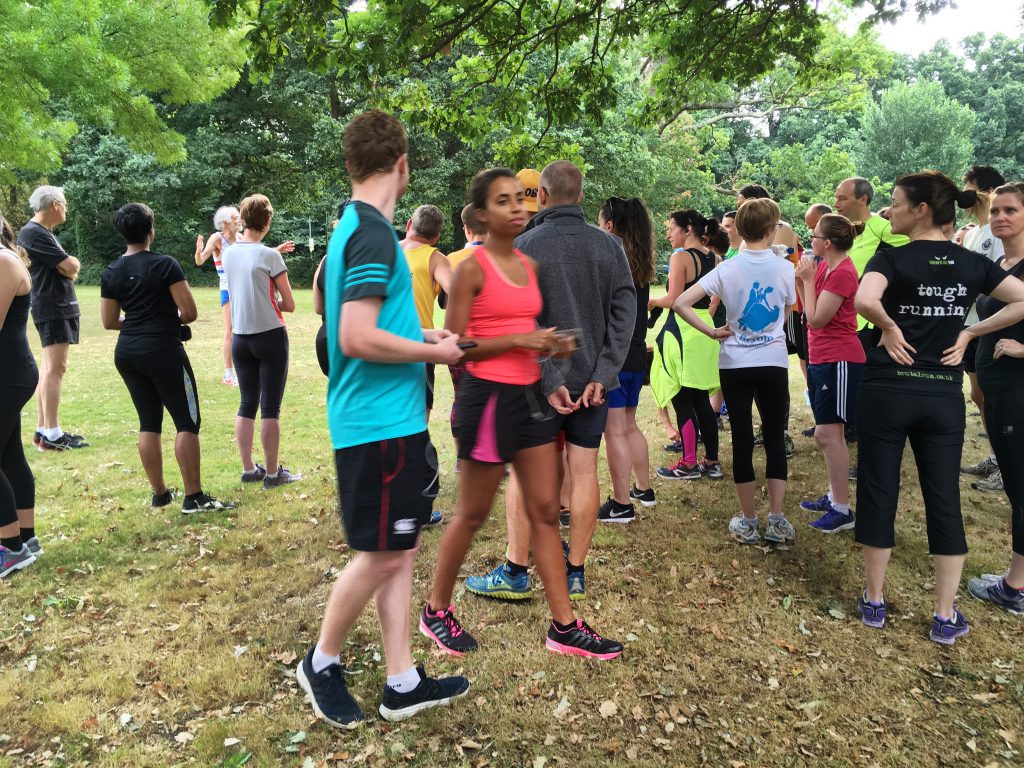 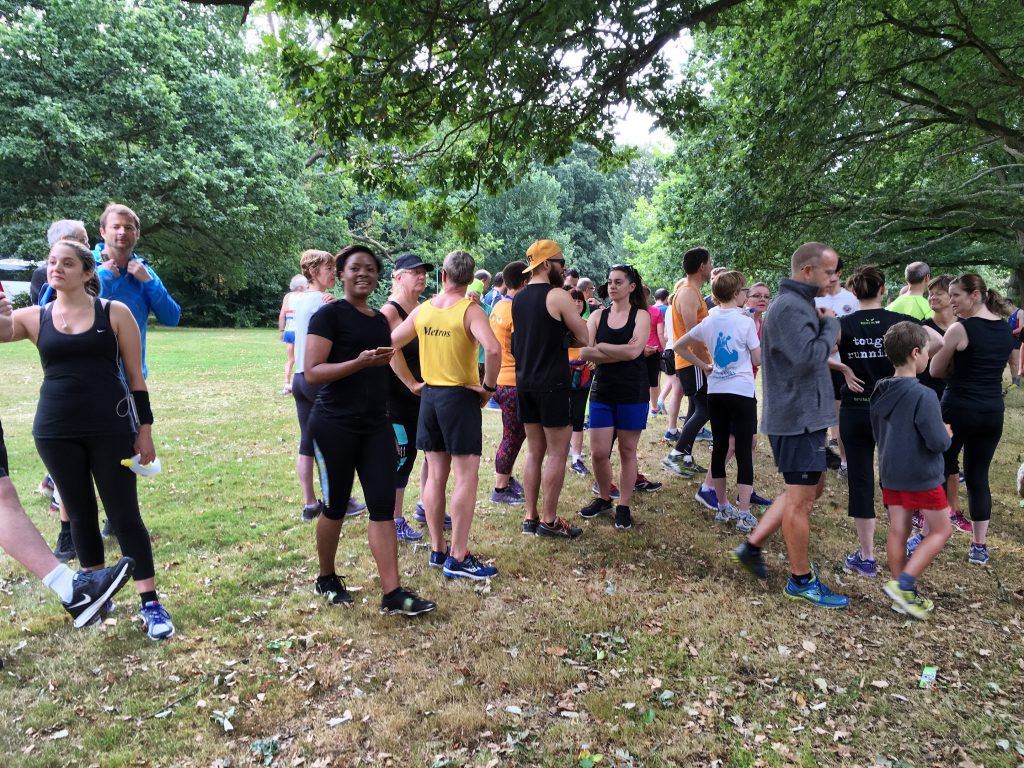 In the end, almost everyone who took part was actually running today. This is almost unheard of. It would be the one parkrun where the tail runner wasn’t able to run. Still, Commando had me and a first time runner, who ran out of steam after the first hill and walked with us for the rest of the way, to keep him company. It wasn’t my fastest parkrun walk by a long way and, apart from the tail runner, I did come last, mostly because I let the first timer go ahead of me at the funnel. Still, as Commando always says, “you’re lapping everyone on the couch.” 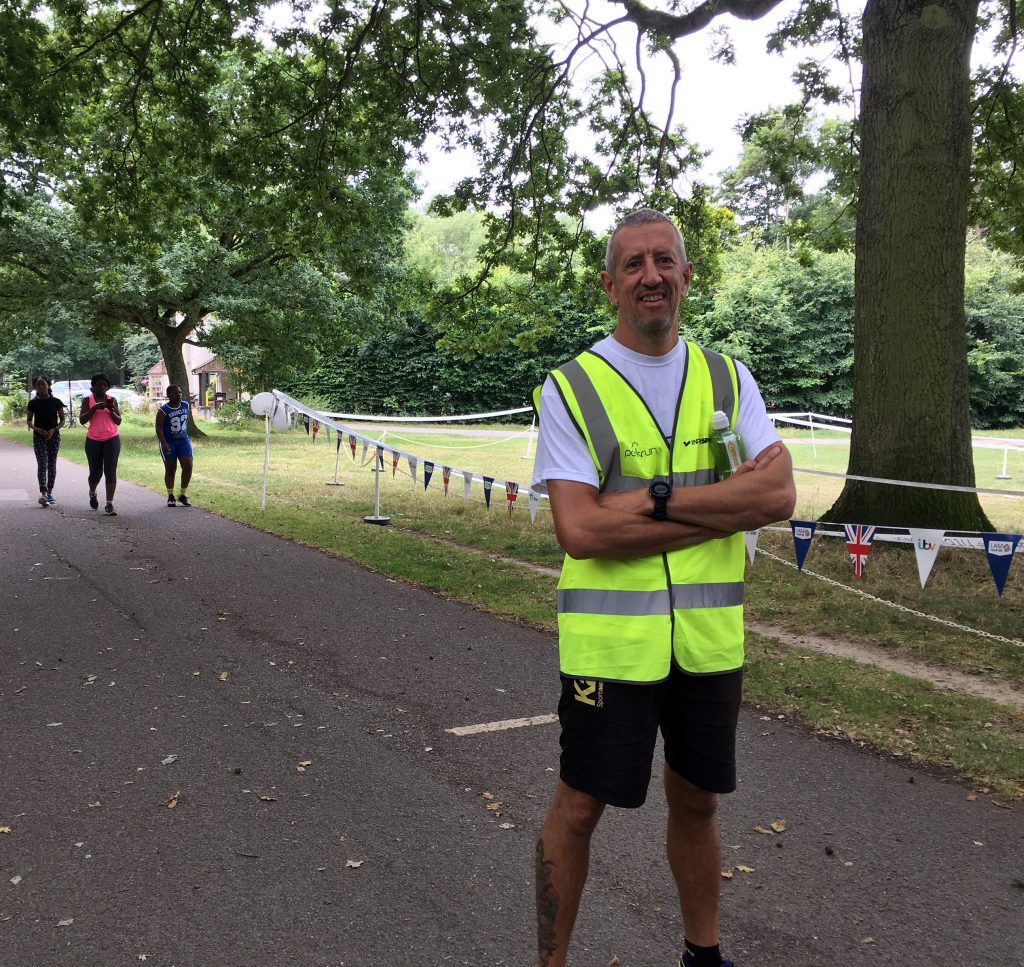 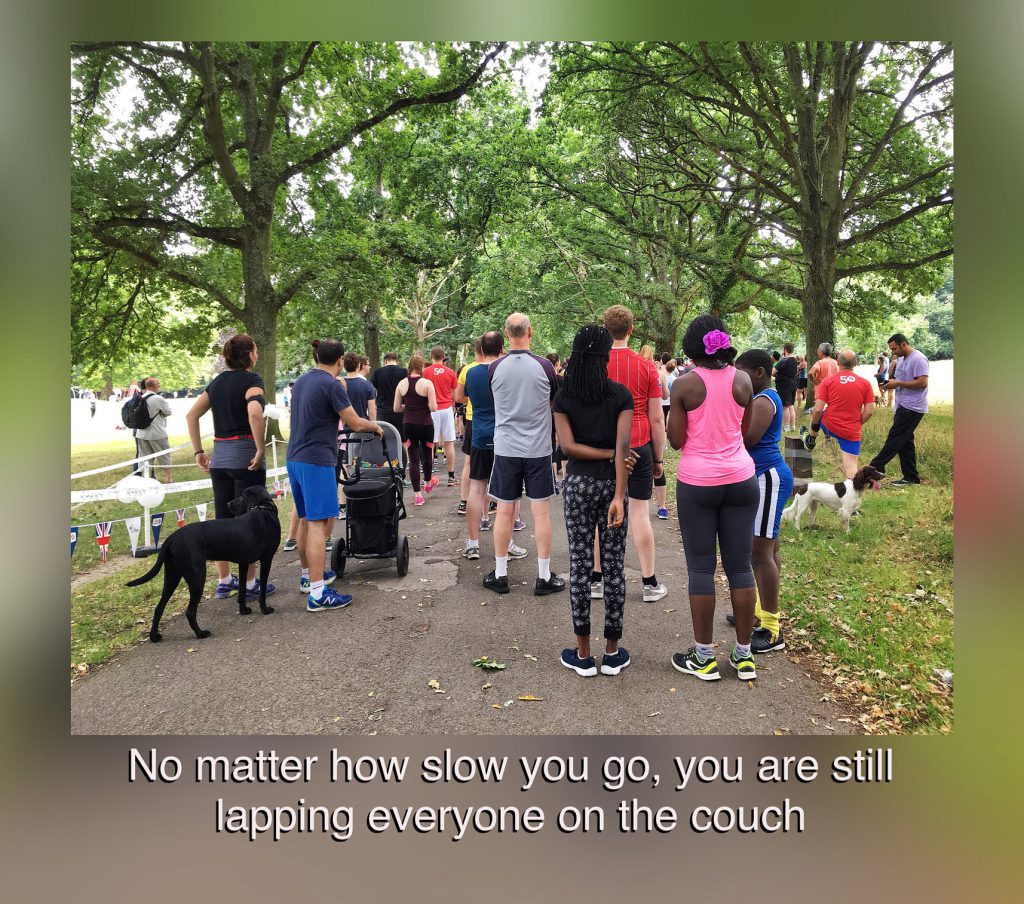 Was I Am Team GB a success? There were certainly lots of new faces at parkrun but the real test will be how many of them become regulars.

4 thoughts on “A very special parkrun”